This should come as no surprise that Noctua offers an even higher performing tier level of fans, called the IndustrialPPC (Protected Performance Cooling) series. As you can imagine, fans have plenty of uses not only in personal computers, but in even harsher, wetter and dusty industrial environments.

For example you can get these fans from Noctua even with an IP67 (Ingress Protection) certification which means they are dust and water resistant to a certain degree; the first number is for protection from object intrusion with 6 indicating total protection from dust. Then the second number is for water intrusion or exposure and 7 means that the fan can handle being under 1 meter of water for up to 30 minute.

If this wasn’t enough, some models even operate at 24V while satisfying the AEC standard which stands for Automotive Electronic Council:“Noctua’s AEC-Q100 qualified wide input range NE-FD4 motor driver IC in order to support 24V-based industrial and automotive applications. Its sophisticated inrush current suppression and extreme electrical robustness with extended burst and surge immunity allow it to operate safely in sensitive or hostile electronic environments.”

All in all these are serious products and they come in either 120 or 140 mm formats. But can we use them in a personal computer? Of course, since they also come in the standard 12V and mainly because they offer so much cooling headroom which can be fine tuned per your needs.

Today we are covering the 3000 RPM which are the most powerful ones they offer in 12V. Charging at $26 a piece for the 120 mm ones and $28 for the 140 mm variants, these are not budget friendly fans but highly specialised heavy duty options.

If you are after the 24V IP67 Q100 certified 3000 RPM ones these will be even more expensive. Mind you these will work on 12V as well but as you can imagine they will spin up to half of their maximum RPM. Aditionally, they also come in 2000 RPM variants.

Lastly if you want the IP67 on 12V, Noctua offers that variant as well but they spin up to 2000 RPM. 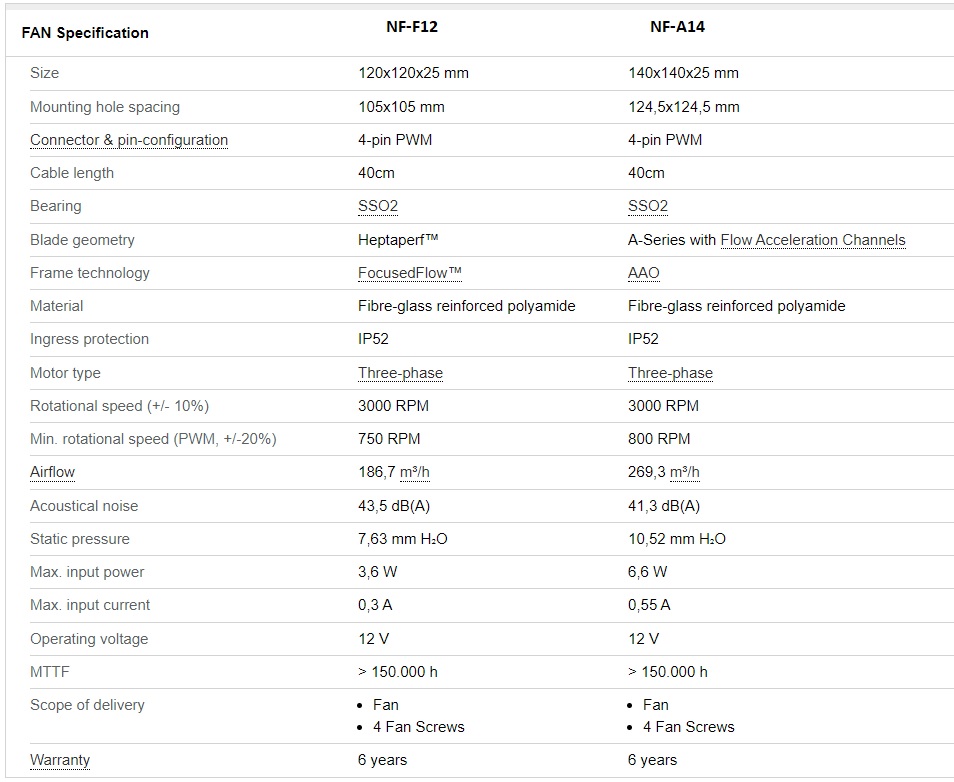 These things are extremely powerful given the 120/140/25 mm size standard – we are taking about 7.63 mm H2O / 186.7 m3/h and 10.52 mm H2O / 269.3 respectively of static pressure and airflow. Of course this level of horsepower will come with the sound penalty cost which Noctua also reminds us on their website.

To offer that level of sustained performance these fans have a 3-phase motor design for maximum running smotthness and their frame is made out of fibre-glass reinforced polyamide which ensures extra resistance to extremely high temperatures of 140 degrees C. Furthermore, they are even more break-proof than the regular fibre-glass reinforced PBT fans.

All Noctua IndustrialPPC fans come in the same very simple black and brown boxes with discrete and minimalist branding.

On the back we have the full specs.

The fans are safely secured inside and only come shipped with a pack of four mounting screws. Also the outer rubber pads can be replaced since Noctua offers a wide variety of colours via the chromax NA-SAVPx series.

Both 120 and 140 mm fan have 7 blades but the NF-F12 uses Heptaperf™ as the blade geometry while the NF-A14 uses the ‘Flow Acceleration Channels’.

Boundary layer separation from the suction side of the fan blades leads to increased vortex noise and lower airflow efficiency. In order to suppress this phenomenon, the Noctua’s A-Series impellers feature suction side Flow Acceleration Channels. These channels alter the flow distribution on the suction side of the blades and speed up the airflow at the crucial outer blade regions. As flow separation is more likely to occur when the speed of the fluid relative to the fan blade is low, the increase in speed achieved through the Flow Acceleration Channels leads to significantly reduced flow separation, which permits lower vortex noise and higher airflow efficiency.

The whole series uses the SSO2 bearings which are Noctua’s own design. The self-stabilizing oil-pressure bearing (SSO-Bearing) system has always been at the heart of Noctua’s award-winning premium fans.

Another upgrade is the three-phase motor design. While most axial fans use single-phase motors with 4 slots, Noctua’s industrialPPC fans feature a three-phase design with 6 slots, which provides smoother transitions between the slots and thus allows for even higher running smoothness, further reduced vibrations and unprecedented energy efficiency.

They also have a generous extra long power cable at 40 cm for more flexability.

Lastly, they even come IP52 certified for water and dust protection. Thanks to a special varnish coating that covers the motor and PCB, the these variants of the IndustrialPPC series complies with the ingress protection rating IP52. This means that it is not only highly dust resistant but also withstands dripping water equivalent to 3mm rainfall per minute. 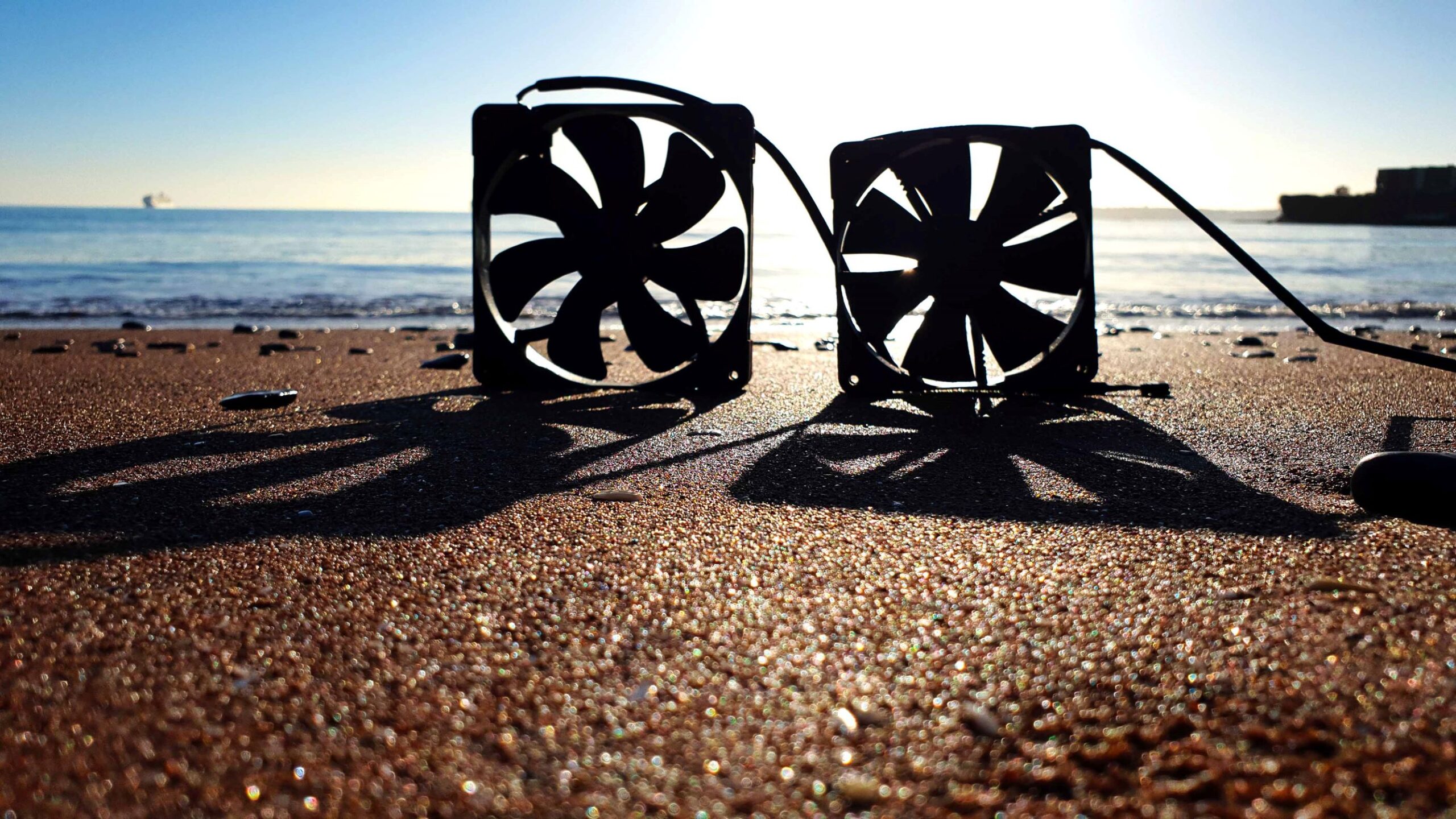 Let’s start in order of CPU load difficulty. First up is the Cinebench R15 test. The specs are confirmed per say since the fans spin much higher than the other ones tested. Thus, they push more air and with a higher static pressure, hence we see basically a perfect hierarchy. Since on auto mode, they will spin higher than an equivalent fan, they will offer a bit better cooling performance while still being silent. After 35-40% RPM these will get noisy since we already know that their main focus is not silent operation.

The Cinebench R20 is a more modern up to date multi core benchmark suite. So naturally we will see a bigger load and thus a larger temperature figure than the R15. The scenario here is just copy-pasted across the board; the Noctua IndustrialPPC fans take the lead.

In AIDA64 we isolated the stress test just for the CPU therefore we should get the highest stress scenario for the CPU. Nothing changes across the overall hierarchy.

Rise Of the Tomb Raider is a fantastic game and also a good testing title for both GPUs and CPUs. Still not as stressful as a synthetic torture test but a great indicator of real life usage. Since the game isn’t pushing the CPU as much as a synthetic benchmark, we get really good numbers.

The noise levels are the only drawback with these extra powerful 3000 RPM fans. However, since they come with a disclaimer that they will generate extra noise and their overall build purpose, we can’t deduct too many points here. If you use them on auto % RPM or a manual curve, around 40% of the max RPM, above that is when they will become audible.

These are highly specialised and very powerful fans. They are build for, as per their name, industrial applications where noise output isn’t one of the main requirements. The fact that they are overbuild to withstand that extra RPM and harsher conditions, this can make them be very attractive to someone who wants the maximum cooling potential for scenarios like overclocking records or water cooling, where static pressure is a must. Alas, if you are looking after the absolute cooling performance, these are an excellent option as long as you don’t care about the jet-engine-like noises. You can also get these and keep them at 40% to be at least in the realm of silent operation but by doing this, in a way, you would leave a lot of cooling performance on the table and you would be better off by getting the regular ones – this applies to the ones tested today, the 3000 RPM ones. All in all, they are a very interesting proposition and no wonder the 2000 RPM ones are used even by ASUS in their AIO products.

Many thanks to Noctua for supplying us with this hot rods !