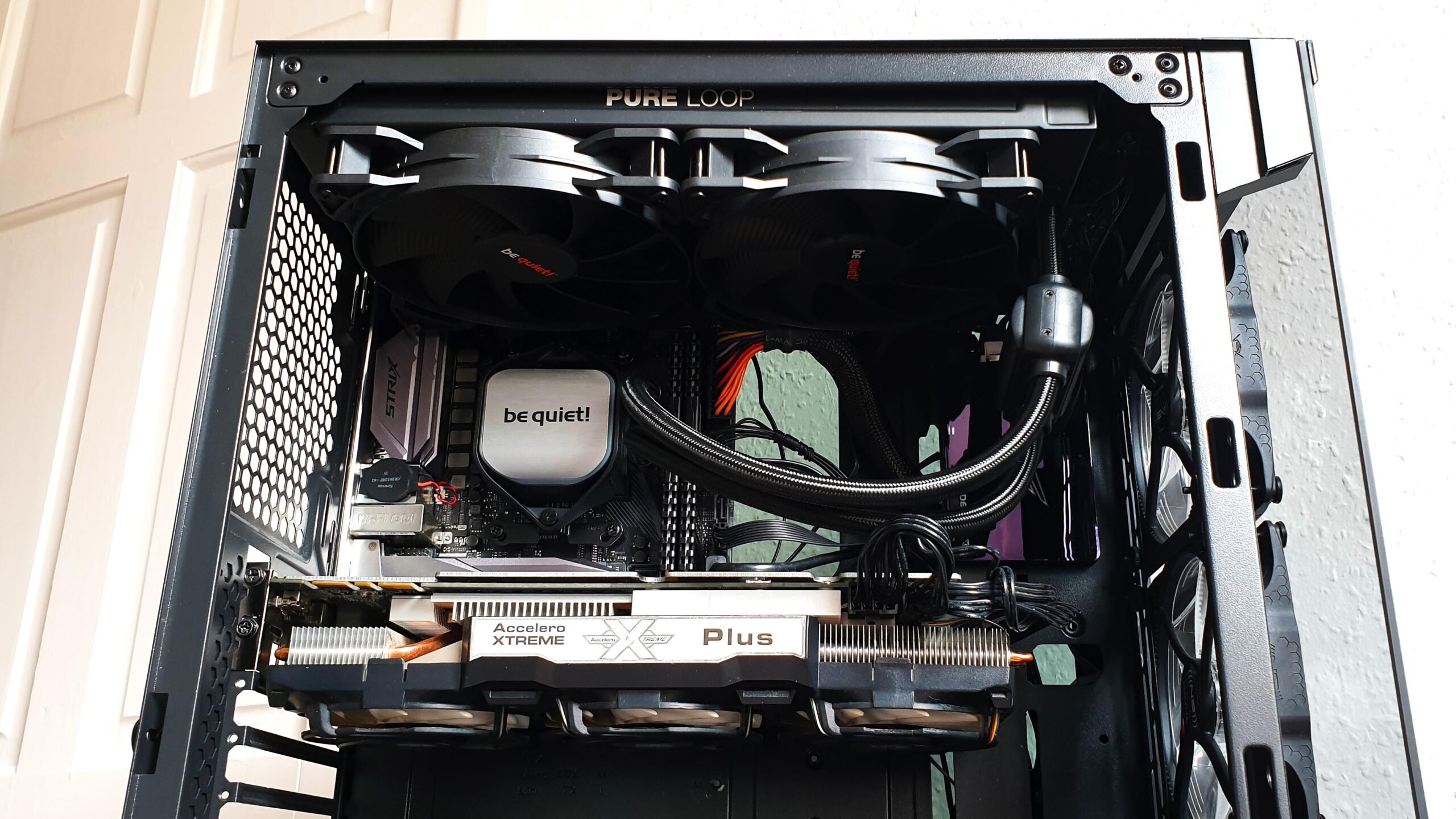 Today let’s have a look at be quiet!’s new line of all-in-one watercoolers dubbed “Pure Loop“. They range from 120 all the way to 360 mm radiators and bring a very interesting combo of a high contrast black and silver CPU block with white LED lighting paired to a black radiator, decoupled pump, and Pure Wings 2 fans.

All of these, plus an easy-to-access refill port that simplifies the refilling process and makes handling very convenient, at a very attractive price bracket, with a 3 years manufacturer’s warranty.

As previously stated, they offer these AIOs in the most used configurations, more specifically a 120, 240, 280 and 360 mm variant. We have today the 280 mm option which costs $105. This is very attractive given the overall offering, while being positioned just below the full RGB products from the competition. 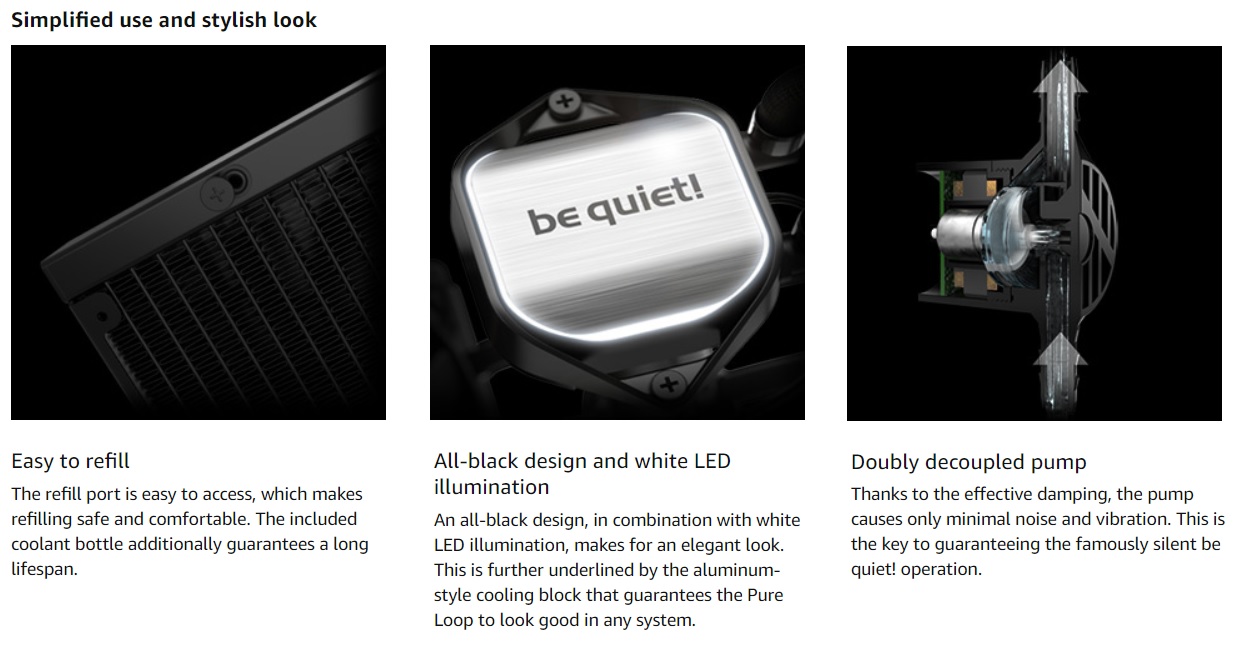 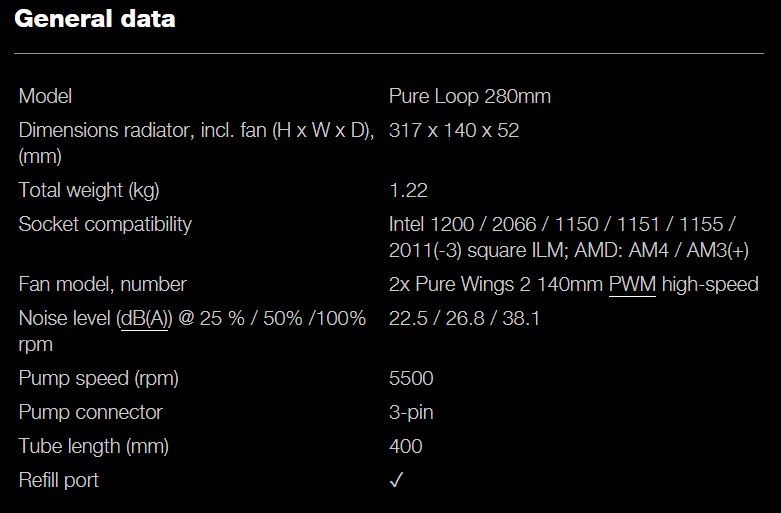 So far it stands out with that decoupled pump which apparently is for minimal noise output and vibration reduction. Also the easy-to-access refill port and included coolant bottle guarantee a longer lifespan of the AIO.

It will accept all the major modern sockets while the aluminium styled pump block comes with white LEDs for a touch of character.

The packaging respects be quiet!’s typical theme and the AIO follows a certain aesthetic norm. Despite the minimalist branding and the all black background with a visual depiction of the product on the front, it’s easy to identify that this is the Pure Loop series.

Given the size of the box, there is plenty of real-estate to be filled and be quiet! chose to imprint some of the main product highlights on the back.

The full detailed specs list resides on the side. On top of it we have a small introduction about the company.

OK, let’s dig in. Everything is nicely stored and protected in this cardboard tray. We highly appreciate the fact that the radiator has an extra layer of protection via its own carboard box which will make sure that the fins will not get bent that easily during transport, versus most AIOs that come in just a plastic bag.

All the supplied socket installation items are divided into labelled zip-lock bags.

Now, here is the full breakdown of the parts and accessories supplied: 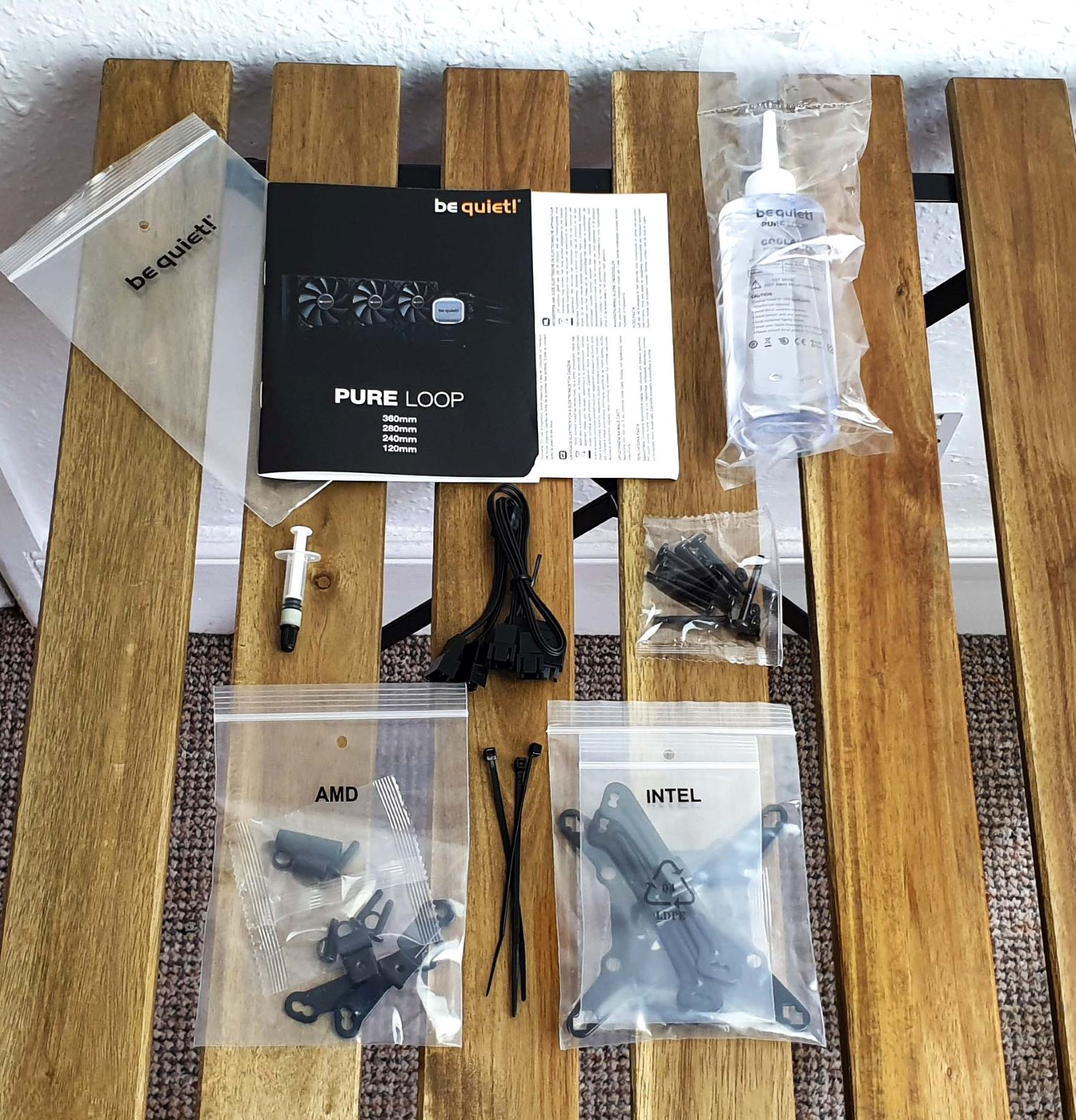 The 2x 140 mm fans are from the Pure Wings 2 High Speed range and spin up to 1600 RPM. They are able to offer up to 160 m3/h of airflow and a static pressure of 1.82 H2O while not going over 37.3 of dB(A). Also the frame is very good looking and stands out when compared to the regular square design of most fans.

They use high-quality rifle bearing technology for the rotors thus assuring a lifespan of up to 80,000 hours. Lastly we have nine airflow-optimized fan blades that reduce noise-generating turbulence due to their ‘ribbed’ design.

It has an FPI count (fins per inch) of 20, which is mostly the norm.

What is unique with this series is that there is a fill port on the radiator for easy access and refilling. This should allow consumers to extend the service life of these units and maintain optimum cooling performance.

The tubes are 400 mm long and are fully sleeved. Another unique feature here is the placement of the pump which is ‘upstream’, on the tubing rather than the radiator or CPU block.

This branding is placed in the middle of the rad and if you install the unit in the top orientation of the case, the writing will be in your line of sight.

Another thing to point out is the fact that 3 pin cable that comes out of the CPU block is just for the white LED illumination while the second one comes from the ‘upstream’ pump.

The swivel fittings are a great and must have feature especially in this price range.

be quiet! went for a simple and minimalist approach in redesigning the CPU block with this plastic cover which has an aluminum-style finishing.

The base is nickel-plated with visible machining marks which are very smooth to the touch.

Lastly, before we jump into the next chapter, here are the fans installed on the radiator.

Our main testing platform is centred around AMD’s AM4 socket but in an ITX format to fully test any overall compatibility issues, since on this layout, all of the components are crammed more together than the larger motherboard formats.

After you made sure that your case will fit a 280 radiator, let’s proceed with the first step. Attach the fans to the radiator while making sure that the fans’ cables exist towards the motherboard side for a cleaner WM.

Reuse the stock AMD backplate after you remove the plastic front brackets. Then install the black spacers with the inner cut-out facing towards the motherboard.

Make sure the mounting screws are in the correct socket cut-outs and then secure the metal brackets to the backplate.

Apply some thermal paste with your desired method and then secure the CPU block. Overall it was a very easy and straightforward installation.

The last part is to power both the CPU block and pump via the dual 3 pin SATA powered adapter and the Y-adapter for the 4 pin PWM fans.

Now for the final check. Well, as you can see the radiator fit on the limit since our testing case is quite weird as in it’s very wide but not that long and tall – hence why the rad looks so crammed in there and touches the 24 pin power cable. This is has nothing to do with the Pure Loop AIO, it’s our case that’s the culprit.

The CPU block has minimal footprint and even on an ITX motherboard there is no problem with the exiting tubes. Then the sleeved tubes have the right amount of length to reach comfortably but not too long to hang unnecessarily.

As for the last piece of the puzzle, here is the illuminated CPU block.

Let’s start in order of CPU load difficulty. First up is the Cinebench R15 test. On the left we have the CPU in stock form while on the right we have it overclocked. The be quiet! Pure Loop is the first 280 mm AIO to honour us in our new testing platform and thus on the charts, and naturally it takes the lead over everything by a small margin. Nothing to be surprised about, after all, we are talking about watercooling. So the Pure Loop becomes our ‘ground zero’ benchmark item for any future AIO that we test. 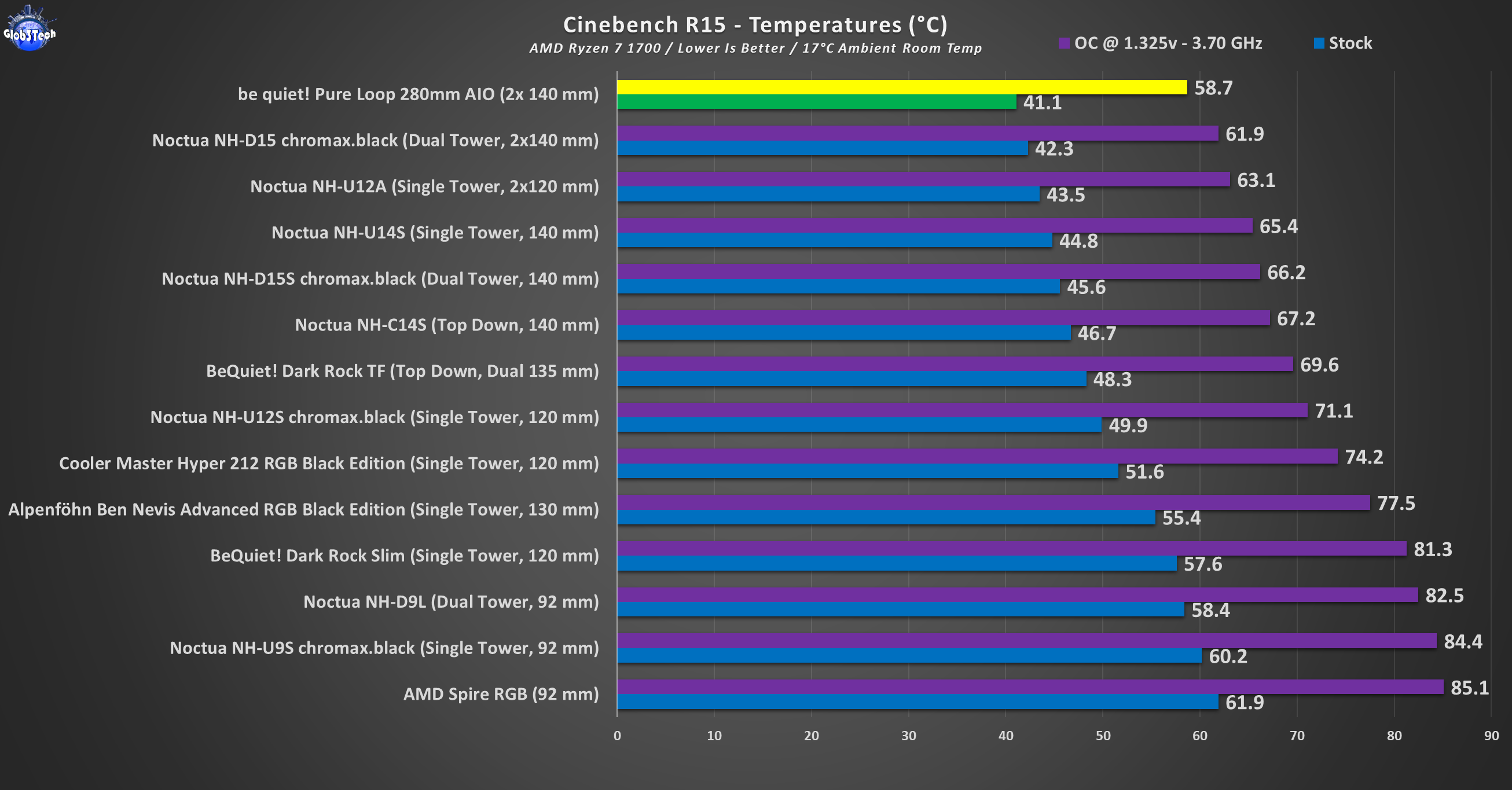 The Cinebench R20 is a more modern up to date multi core benchmark suite. So naturally we will see a bigger load and thus a larger temperature figure than the R15. The previous hierarchy is preserved.

In AIDA64 we isolated the stress test just for the CPU therefore we should get the highest stress scenario for the CPU. Curiously, here we have a higher stock temperature but smaller overall for the OC setting when compared to the R20.

Rise Of the Tomb Raider is a fantastic game and also a good testing title for both GPUs and CPUs. Still not as stressful as a synthetic torture test but a great indicator of real life usage. Since the game isn’t pushing the CPU as much as a synthetic benchmark, the numbers here will be excellent across everything in the charts. 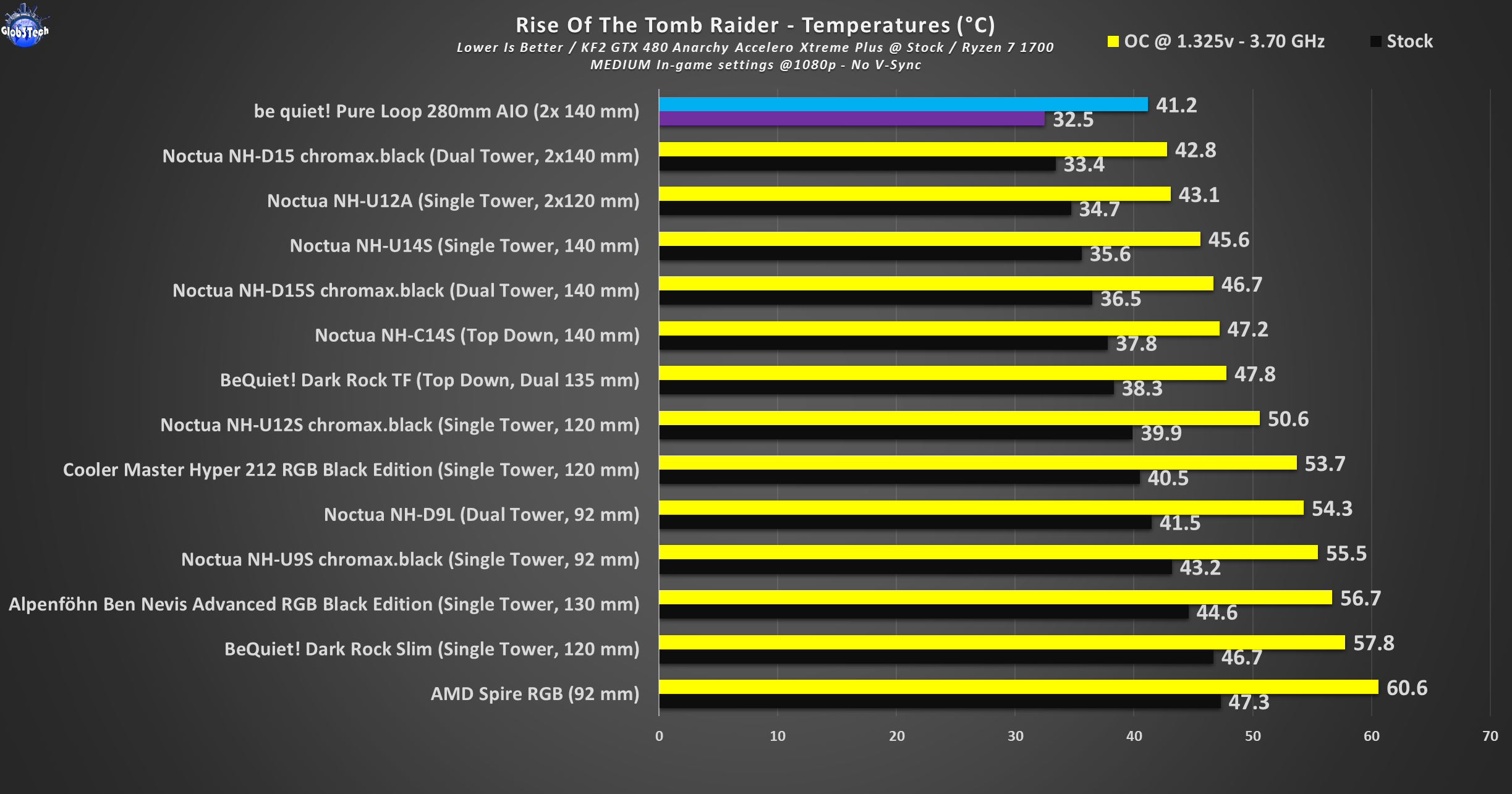 Regarding the noise levels, the be quiet! Pure Loop 280 mm AIO delivers excellent acoustic results as well, as long as the fans do go above 60-70% RPM (which rarely they did in our tests even with our overclocked CPU). At 100% RPM, yes they will be audible. 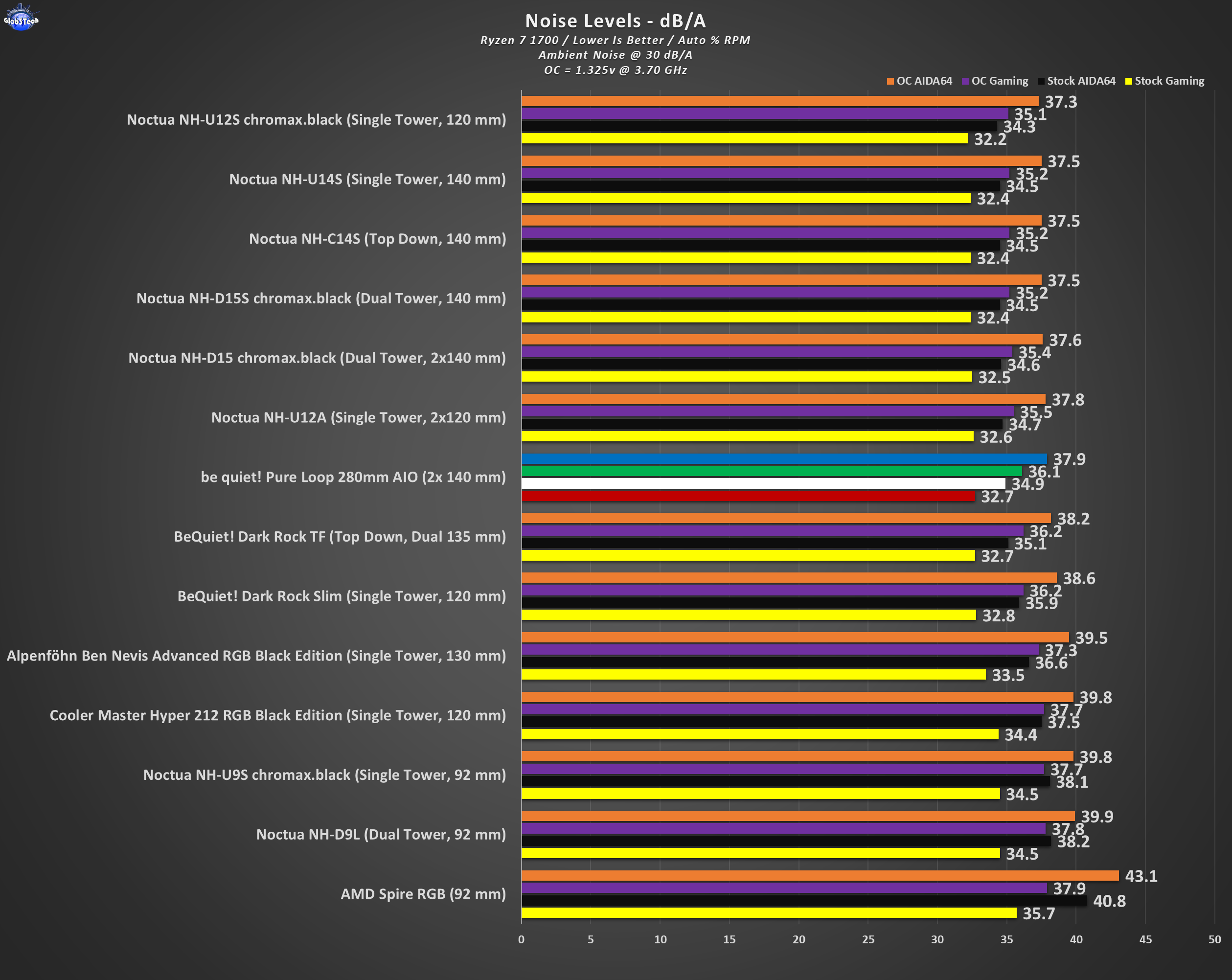 This 280 mm AIO is a perfect example of a great value item. It ticks a lot of boxes when it comes to the segment of all-in-one CPU coolers. The price tag is very attractive and it slots itself exactly in between the budget options from the competition and the full RGB high performance offerings. Having one of the quietest pumps on the market constitutes one of the main highlights here. Then the extra highly welcomed features like the refillable radiator design in combination with the presence of coolant bottle for long term servicing, easy installation and the overall cooling and low noise performance, make the Pure Loop 280 mm a solid, solid choice!

– At least RGB implementation for the CPU block
– The fans when closer to the max RPM % will be somewhat audible
– The usage of plastic for CPU block cover instead of metal for example, but in all fairness, it still looks really good