Across their product range, Noctua knows how to build long lasting variants. Then when they finally upgrade that specific item, despite the fact that on the surface it might only looks like a minor revision, however the truth is bigger than that. The NH-C14S is the upgrade to the C14 (which happened over half a decade ago) where the main highlights are a better offset packaging for better compatibility with smaller motherboard formats and more flexibility regarding RAM clearance.

The NH-C14S is a C-type style design CPU cooler where the main appeal is the ability to install a full size 140 mm heatsink and fan in a small form factor case. This is possible dues to the fact that, in its stock form with the fan placed underneath, the C14S stands just 115 mm tall.

There aren’t that many C-type style CPU coolers out there at this quality tier level. Alas, you can grab the C14S for $75 which should be seen as fair value. True, for 15 bucks more you can have the Dark Rock TF which has an all black paint job and comes with two fans but that’s up to you to decide. 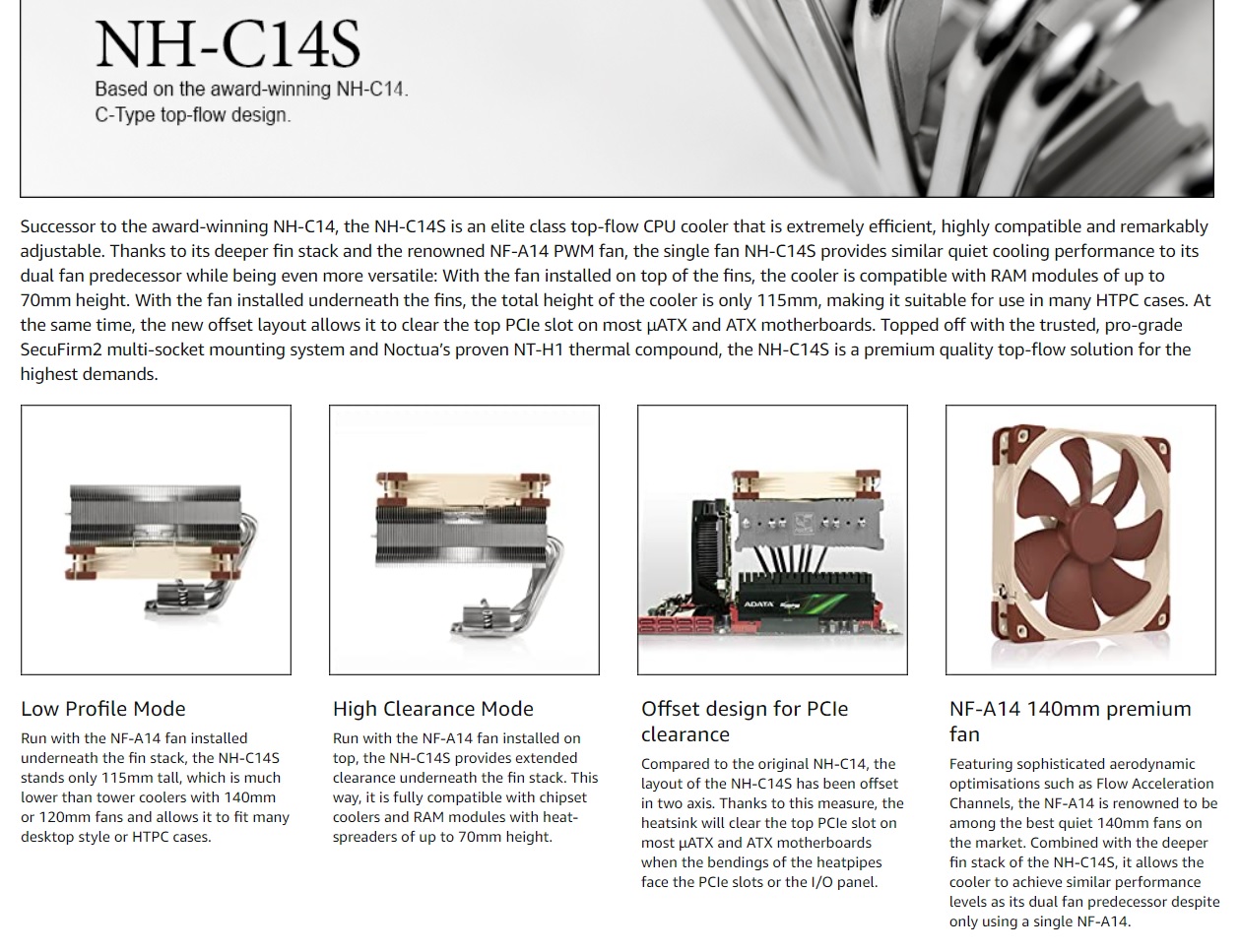 Despite it’s bulky size, you can still choose depending on your needs, how many fans you can attach. With the fan placed underneath (stock form) you can install RAM up to 40 mm tall and then you can easily attach on top of the heatsink, a second fan. Then, if your memory modules are taller than the 40 mm, just place the original fan on top and thus you will have up to 70 mm to play with.

The NH-C14S comes in the standard yet highly recognizable livery with the light brown accents. There’s no official news on a chromax.black variant but who knows what the future may bring. On this side we have a quick list the main product highlights.

The accessory list is present here along side the full specs regarding the heatsink and fan.

This side covers in-depth the full product highlights.

We are greeted with the accessory box which has the ever-useful visual inventory list.

We have the 6 main copper nickel plated heatpipes which are 6 mm thick and one extra that acts as well as a reinforcing strut.

From this angle we see the extra reinforcing plates mounted on the 7th heatpipe.

The craftsmanship is flawless on all Nocuta coolers; just look how much machining went into this area alone, to ensure that the heat pipes are sandwiched properly into copper blocks along the bottom. Then as the base extends upwards, they have pinned the large diameter support bar in the base and screwed that down with a top plate.

The base plate is slightly convex and doesn’t have a mirror polish but there is no imperfection whatsoever.

There are 68 aluminium fins in total and by the 18th fin we have cut-outs to access the securing bolts from the base plate.

Now the supplied NF-A14 PWM fan. We must mention this on every review regarding the SSO2 bearings which are Noctua’s own design. The self-stabilizing oil-pressure bearing (SSO-Bearing) system has always been at the heart of Noctua’s award-winning premium fans. 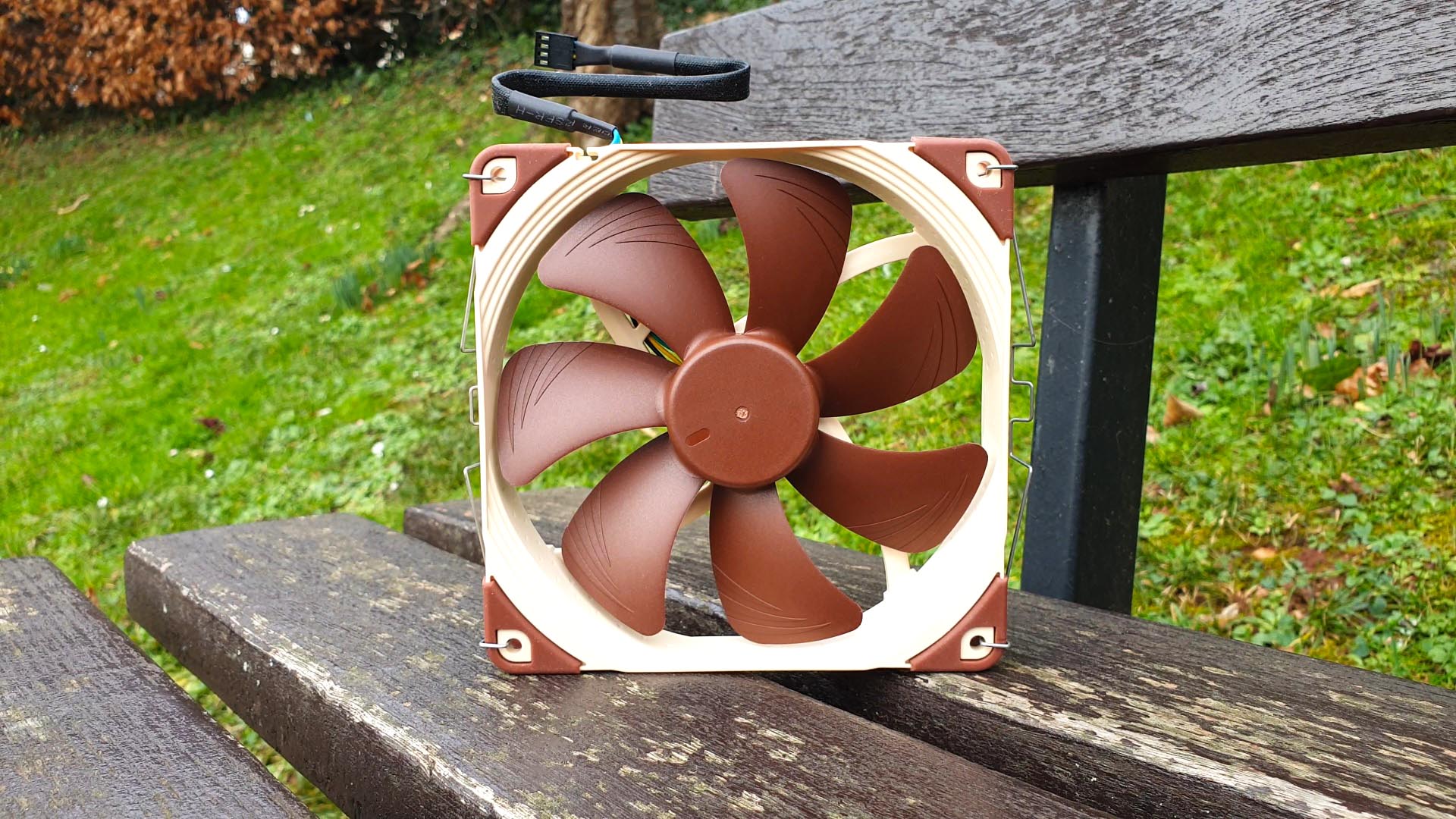 Our main testing platform is centred around AMD’s AM4 socket but in an ITX format to fully test any RAM compatibility issues, since on this layout, all of the components are crammed more together than the larger motherboard formats. Thus an excellent challenge for the C14S.

Noctua’s SecuFirm2™ mounting platform is also present and from previous experiences, this is one of the easiest and most straight-forward installation sequences ever, especially on the AM4 socket.
*On further inspection, both heatsink cut-outs will match the holes from the securing base plates bolts, just make sure you keep the fan in the position in came shipped.

The first step is to remove the stock AMD plastic brackets while maintaining the motherboard’s AM4 backplate. Then attach the AM4 grey plastic spacers.

Then attach the metal AM4 brackets making sure they are orientated inwards. Apply the thermal paste.

Like mentioned before, if you don’t want to take your motherboard out while keeping the fan underneath (if your RAM is under 40 mm tall) then this is what you should do.

*As stated above, now you can see both wholes lining up.

Now let’s check for any clearance issues. Despite being an ITX motherboard, everything clears the C14S even all of the cables.

On the VRM side, the heatpipes are safe. But on this particular case, we had to remove the exhaust 140 mm fan which was 29 mm thick because it was touching them.

Reattach the GPU and that’s it.

As you can see the new offset design that the C14S incorporates makes sure that it will never interfere with your PCIe slot even on an ITX case and even with a GPU like ours that has a ridiculously thick backplate.

Let’s start in order of CPU load difficulty. First up is the Cinebench R15 test. On the left we have the CPU in stock form while on the right we have it overclocked. The C14S proves itself as expected, offering great cooling performance.

The Cinebench R20 is a more modern up to date multi core benchmark suite. So naturally we will see a bigger load and thus a larger temperature figure than the R15. Here its only rival per say, the Dark Rock TF scores almost identical due to its dual heatsink design but lower revving fans.

In AIDA64 we isolated the stress test just for the CPU therefore we should get the highest stress scenario for the CPU. The hierarch is still preserved and the C14S offer yet again great results.

Rise Of the Tomb Raider is a fantastic game and also a good testing title for both GPUs and CPUs. Still not as stressful as a synthetic torture test but a great indicator of real life usage. Since the game isn’t pushing the CPU as much as a synthetic benchmark, the C14S is more than capable in a gaming scenario. 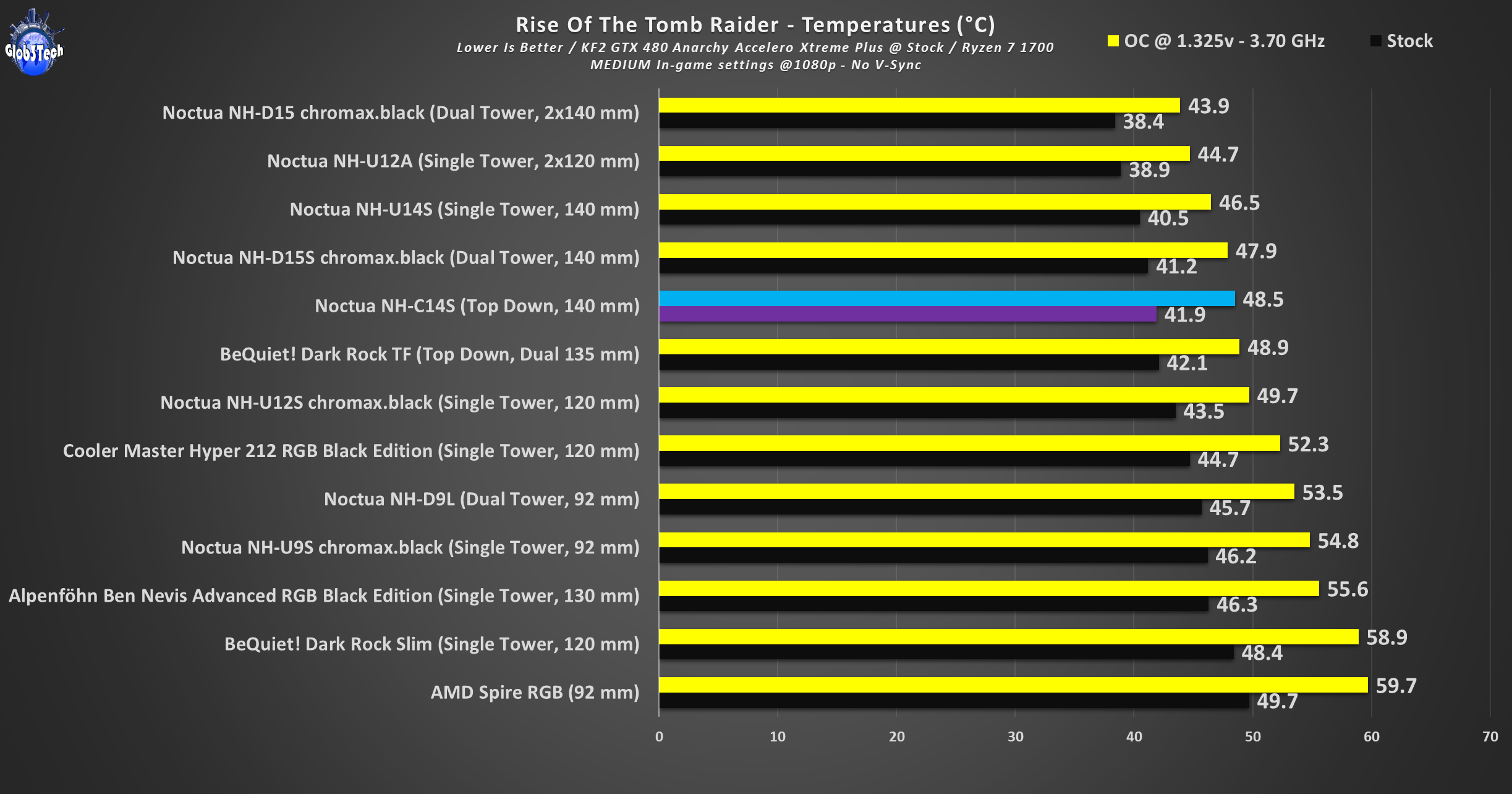 The C14S passes the noise levels tests with flying colours, not much to point out here. 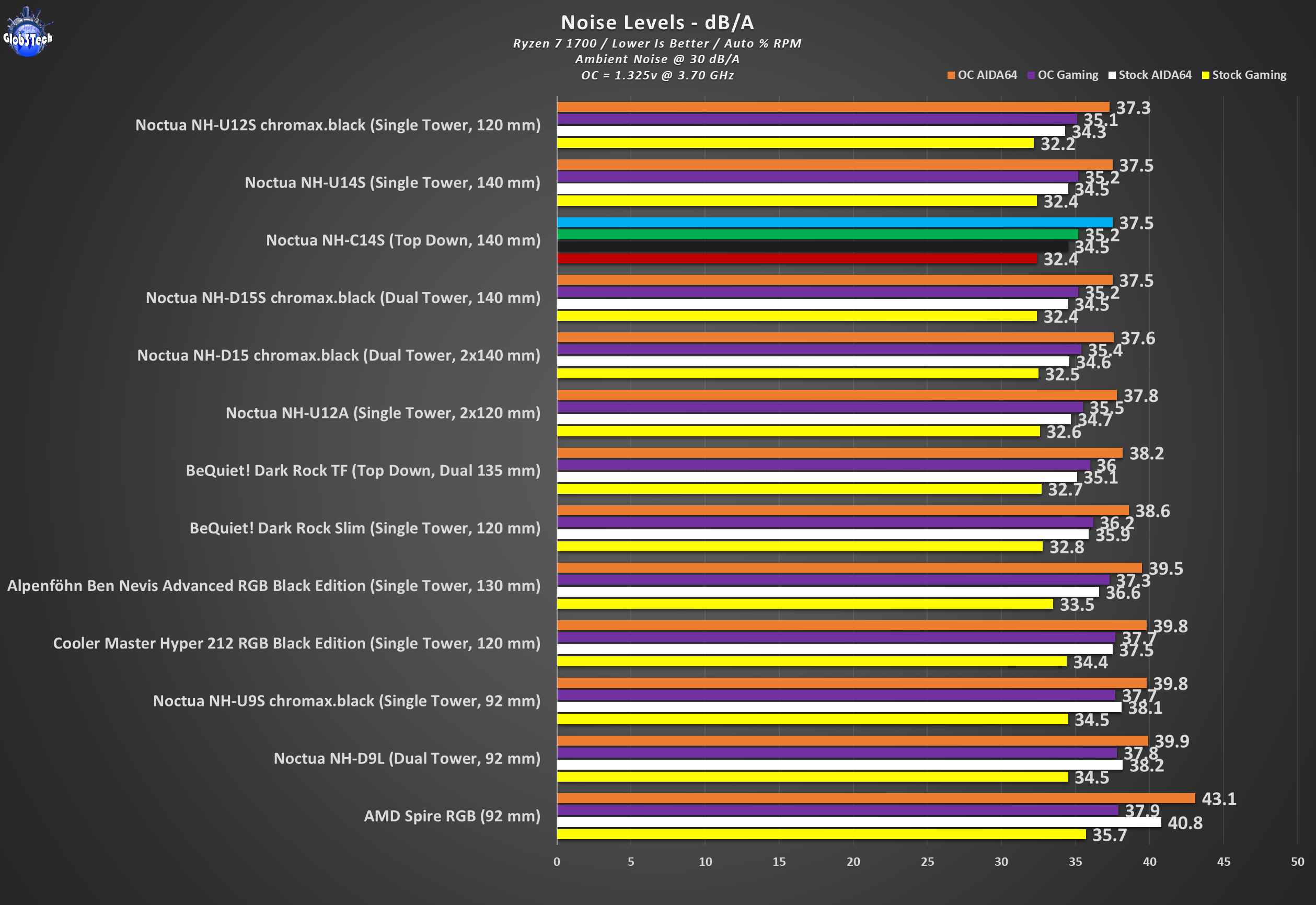 There will be some small form factor cases that can accept such a big cooler. For instance, fans of the highly popular Ncase M1 swear by the NH-C14S’ capability and we can agree as well without any doubt that this C-style cooler can truly deliver. It features all of the hallmarks of the Noctua legacy, an excellent balance of cooling capability, overbuilt quality and impressive low noise output. On top of that, the extra versatility is very welcomed since you can attach a second fan to further increase the heatsink’s capability or place the existing one on top to give you even more headroom with RAM clearances. The clever offset design will guarantee no headaches on any motherboard no matter how small it is. All in all this is a clear win !

Many thanks to Noctua for supplying us with this epic thing !