Our previous interaction with an AIO solution from BeQuiet! left us with very positive feelings even with their smallest variant, the 120 mm AIO from the Silent Loop series. Today we have a product from the opposite spectrum of their range, the biggest variant, the 360 mm radiator. It should outperform anything we tested so far on our platform but let’s not get ahead of ourselves.

Below we have the prices from three different currencies, from Amazon. Considering how much money you have to spend for a custom loop, depending on your needs of course, but for something plug and play in one go, you can’t beat the price for this 360 AIO from BeQuiet!’s range. 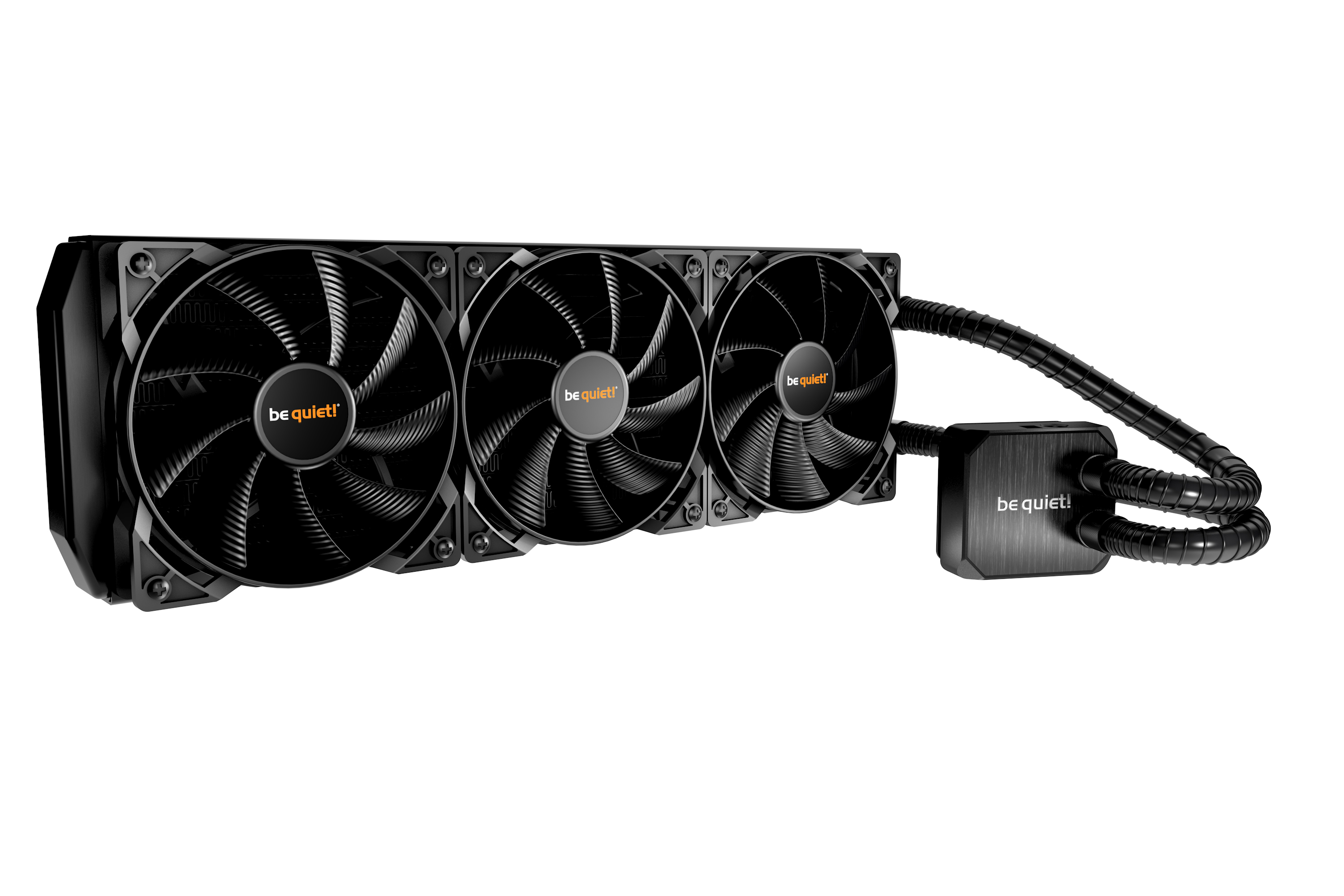 Well, with AIOs it is pretty easy to pin point the main highlights. Obviously 360 mm means that it was 3x 120 mm in a line hence the radiator’s length designation. This setup is good for up to 450 W of TDP.

Now let’s have a look at the reverse flow pump. 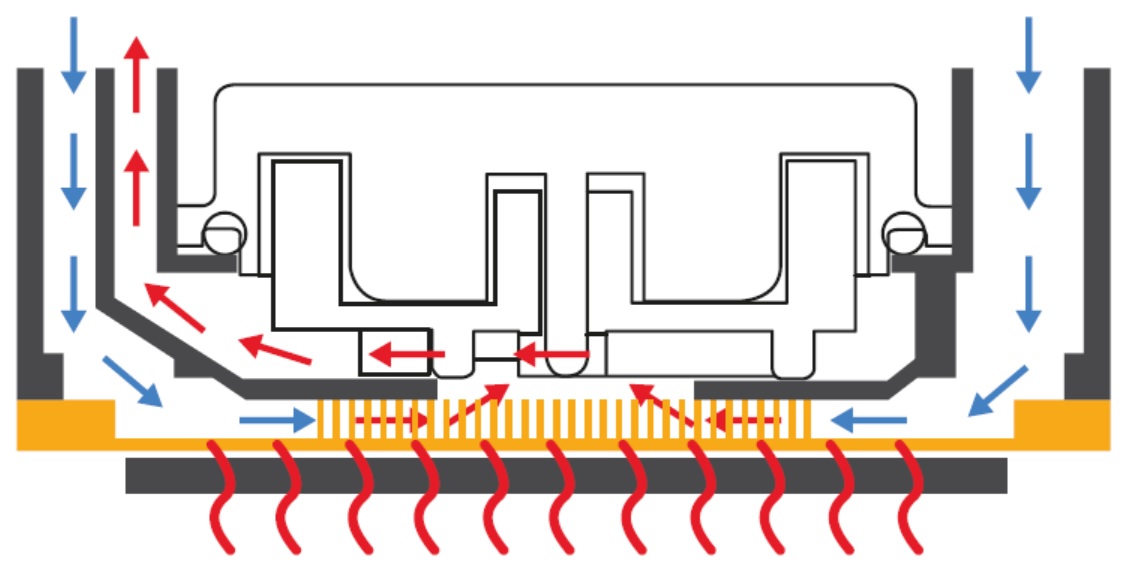 Basically this promises a smoother running pump with far less vibration because the pump draws in the liquid from the outer cavity across the base plate thus discharging the warmer coolant through a second level inside.

As for a complete perspective of the technical side, have a look here. 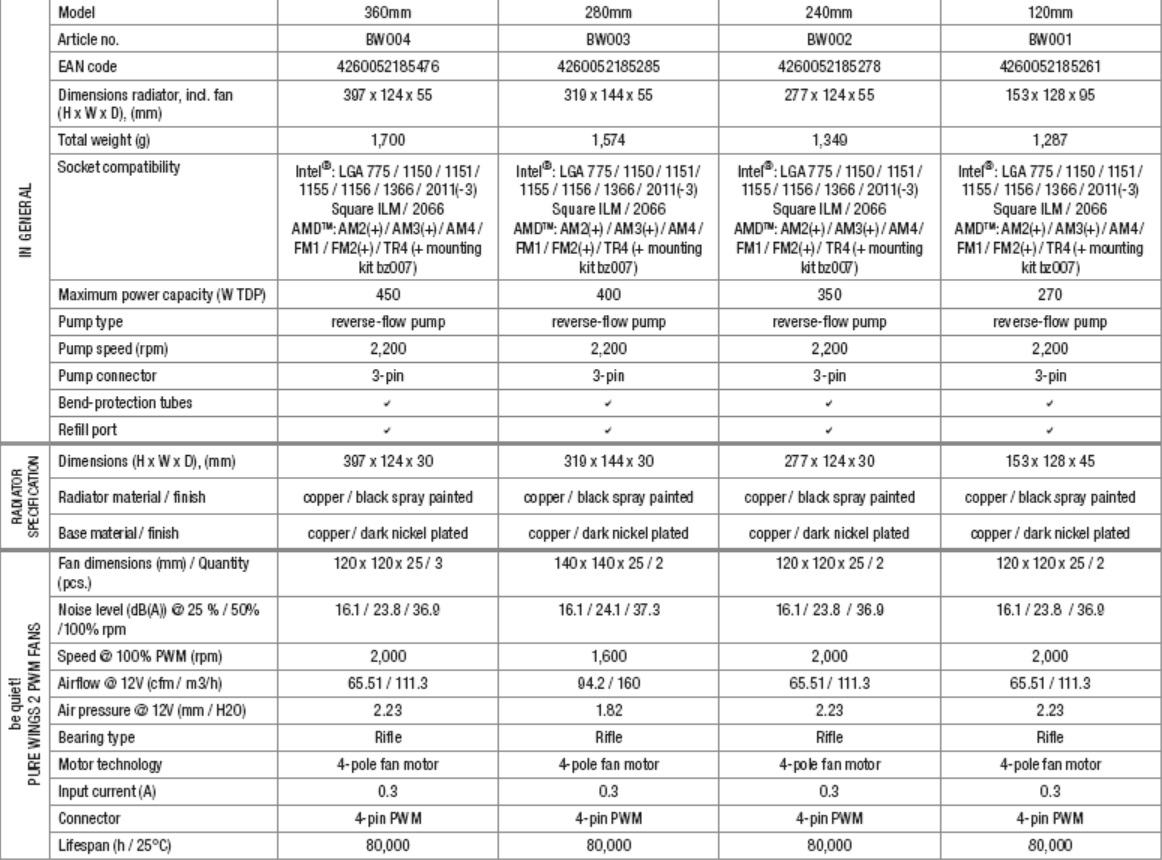 It is the most powerful in the cooling department because of the bigger heat dissipation area. Besides the actual size of the radiator, everything is the same as the smaller models from the pump’s speed, the fans used, build construction and the supported sockets. Just for the new Threadripper TR4 sockets where you need to purchase separately the brackets, the Silent Loop 360 mm AIO supports virtually any socket out there.

BeQuiet! is consistent with their products thus the same theme is present yet again – an all black design with a visual depiction on the front of the product. If the bigger box doesn’t convince you that this is a large AIO, then the writing on the front of “360mm” should take care of that.

More branding is present on the top and bottom of the box.

The other sides handle the technical specification and all of the highlights in multiple languages.

Inside we are greeted by the instruction manual.

Love when products are organised and protected like this – very reminisced of weapon boxes.

Well, a gun needs ammunition, so here is what you get:

As for the 360 AIO, this is it. A very sexy sleek all black matte finished radiator with reinforced black tubes, all connected to a square pump CPU block.

It also retains the modular features, with removable cables on both ends. Speaking of them, they are around 450 mm long which should be plenty to mount the radiator in any tower case without overstretching to reach the CPU area. Also the tubes are reinforced with springs running their whole length.

On the other end of the removable tubes, we have the pump- CPU block assembly with a refill port. Only the logo is present in the middle of the blacked out pump.

As for the contact area, this is made out of copper and is nickel plated. As you can see it has a perfect mirror finish.

Now let’s proceed to assemble it, which you will see it is very easy.

Step 1 – Install the fans with the included twelve M3x30 screws while you keep in mind how you want the radiator to be placed in the case, so you can arrange the fans’ wires to point inwards for an optimal wire management.

Step 2 – Now, with a radiator this long, you should have a case which has a removable top tray if you decide to mount it there. Exactly what we will do. So use the other twelve M3x6 screws to secure the rad to the tray.

Step 3 – Slide the tray in the case and don’t forget to connect the fans to the Y-splitter.

Step 4 – Since we will use a system on the Intel LGA 1151 socket, we have to slide the Intel mounting brackets in the CPU block while making sure the pump’s power connector is orientated out the top.

Step 5 – Mount the backplate onto the motherboard while those two round notches align to the top ones from the socket.

Step 7 – Screw down in an X patern the pump with the corresponding screws, washers and nuts.

Step 8 – Install the Y-splitter and the 3-pin pump plug into the motherboard.

That’s it, take a few steps back and enjoy your creation !

The CPU will be tested in 2 main scenarios: at stock settings and then we will overclock it as high as we can. For both scenarios we used the Intel Burn Test utility, set at ‘High’ stress settings, as the main torture test. Any results over 90° C in any condition are considered a fail.

Room temperature was a recorded ~ 20°C.

The thermal paste used was the one that came with the included bundle of the Silent Loop 360 AIO.

We will compare the results of the Be Quiet! Silent Loop 360 mm between a 120 mm air cooler, then another three Be Quiet! products and a 280mm AIO cooler. I will employ a synthetic test in Intel Burn Test to simulate a theoretical absolute load on the CPU which will dump the most heat and fully test any cooling system’s potential.

For the noise test the fans will be set on the auto % rpm curve. Then placed at 30 cm from the setup was our Pyle PSPL01 noise meter. For this test a GPU with fanless mode is used and we will turn of any case fans to reduce any extra interference.

Let’s start by having a look at the idle temperature of the CPU’s stock settings. 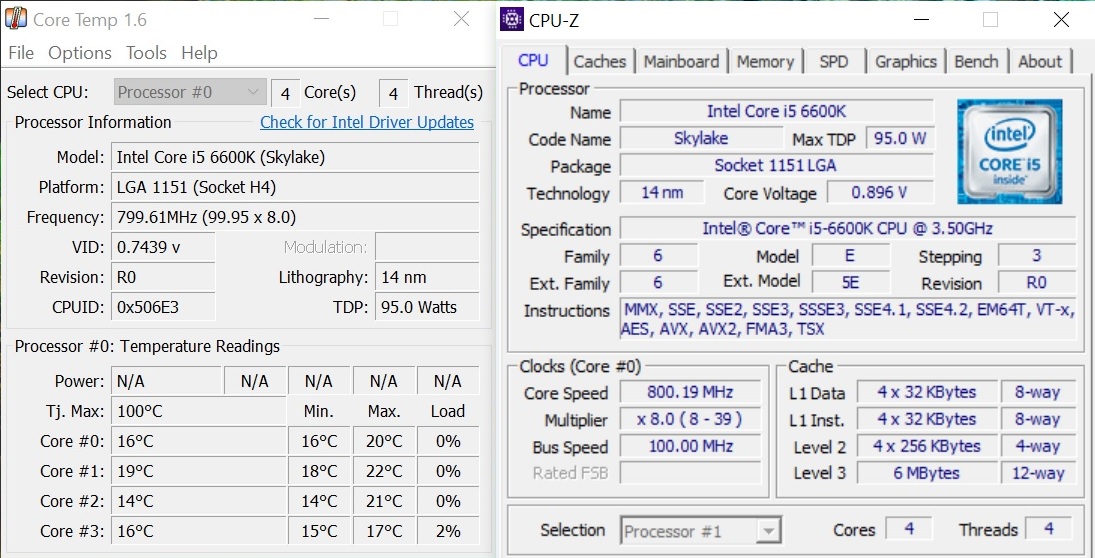 Our test CPU requires a lot of voltage to have a stable overclock of 4.5 GHz. Nonetheless, a good test for the BeQuiet! Silent Loop 360 mm AIO to see how it performs. 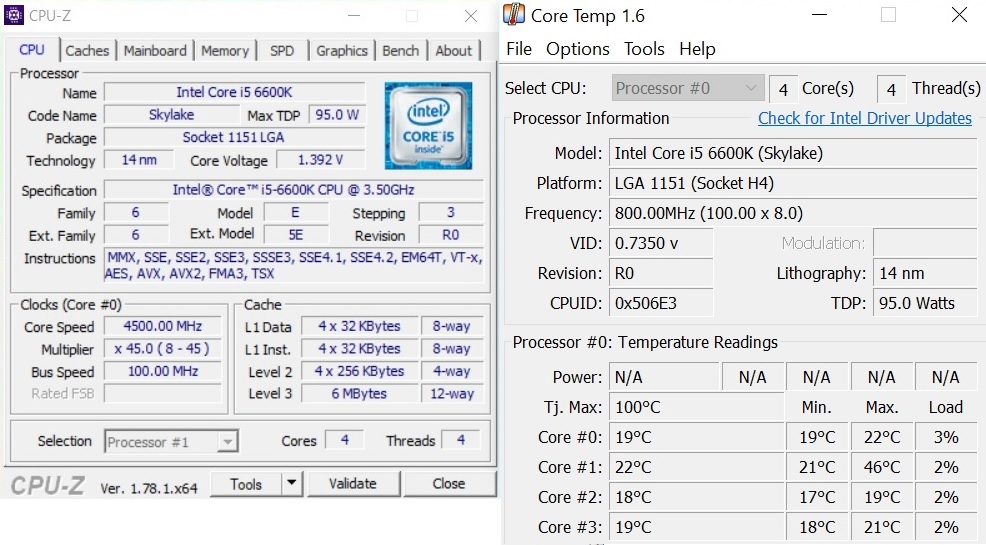 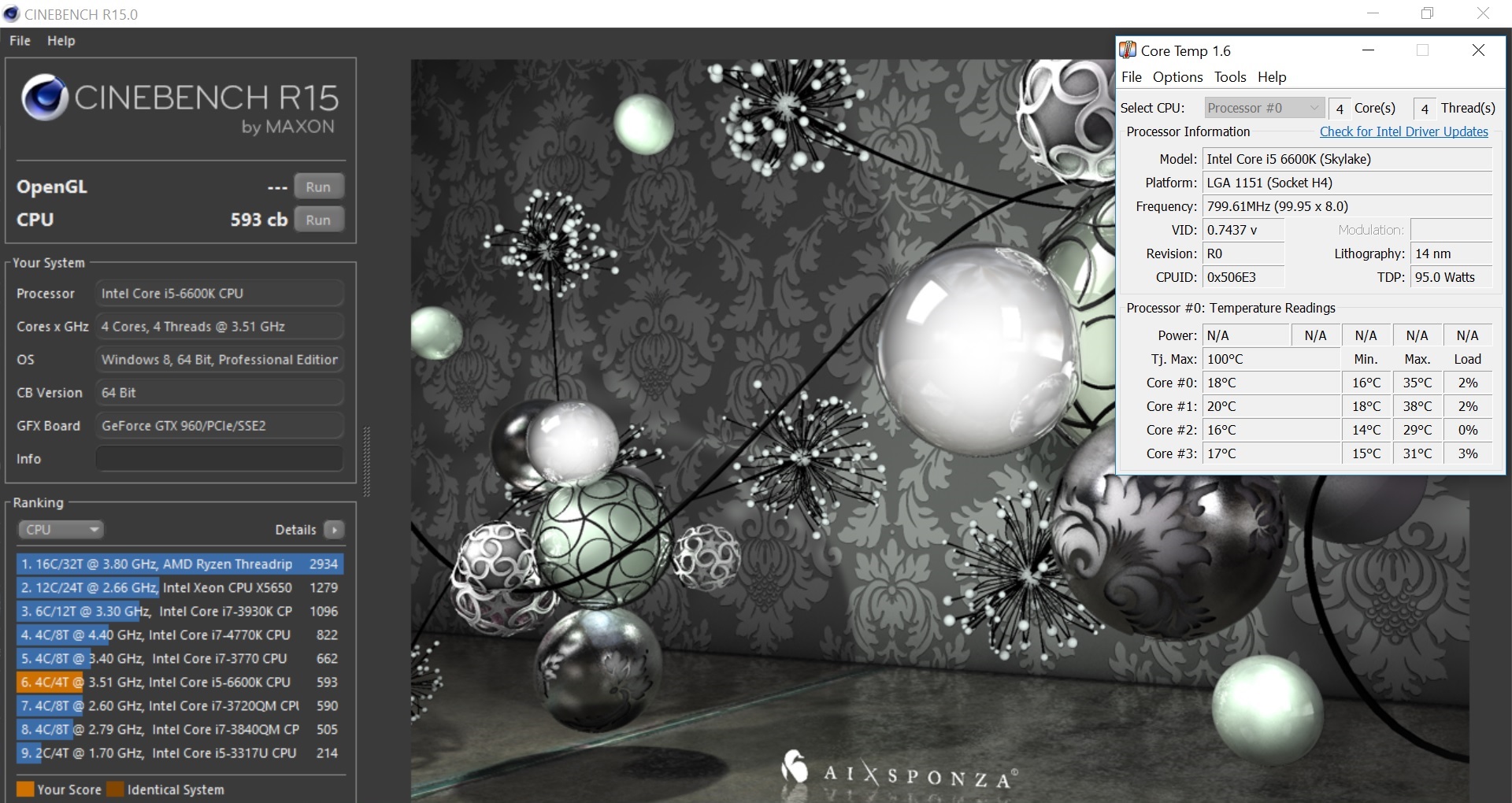 As for the overclock we get these numbers. Also worth mentioning that for the temperature tests (not only for the noise tests) the fans for the BeQuiet! Silent Loop 360 mm AIO are always set at ‘auto’ fan curve via the motherboard’s settings. 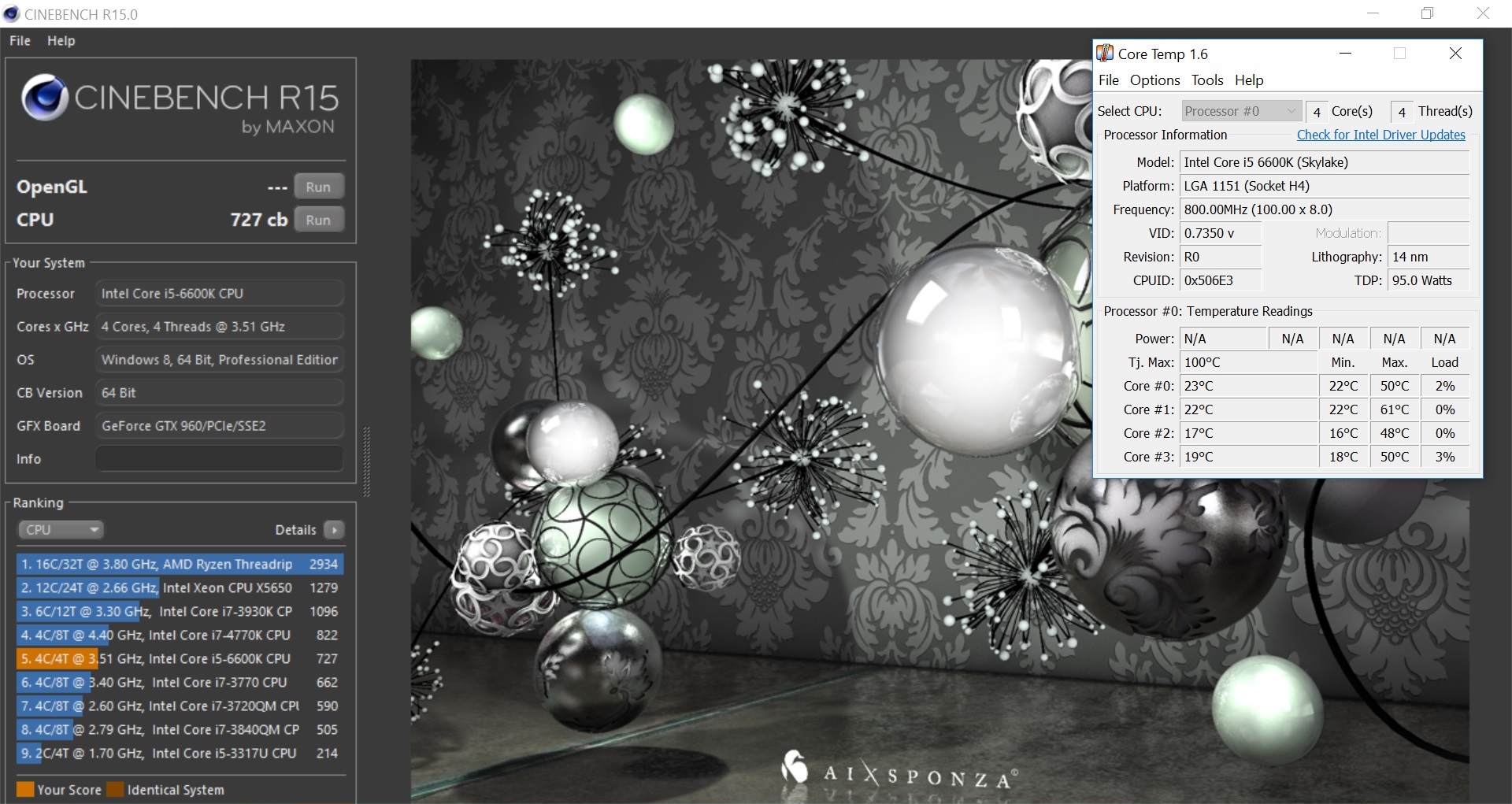 Next up we have Intel’s Extreme Tuning Utility built-in benchmark tool. 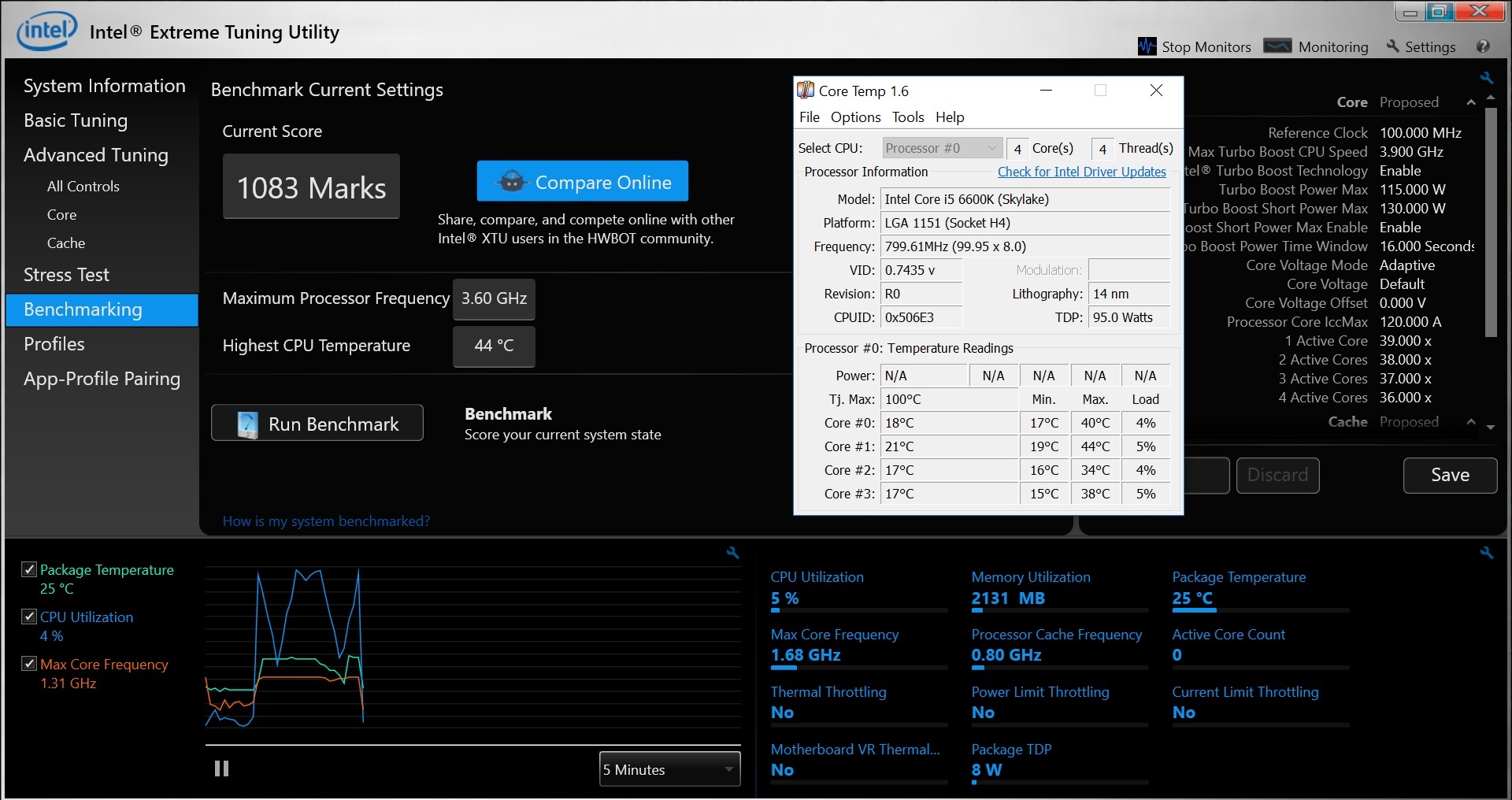 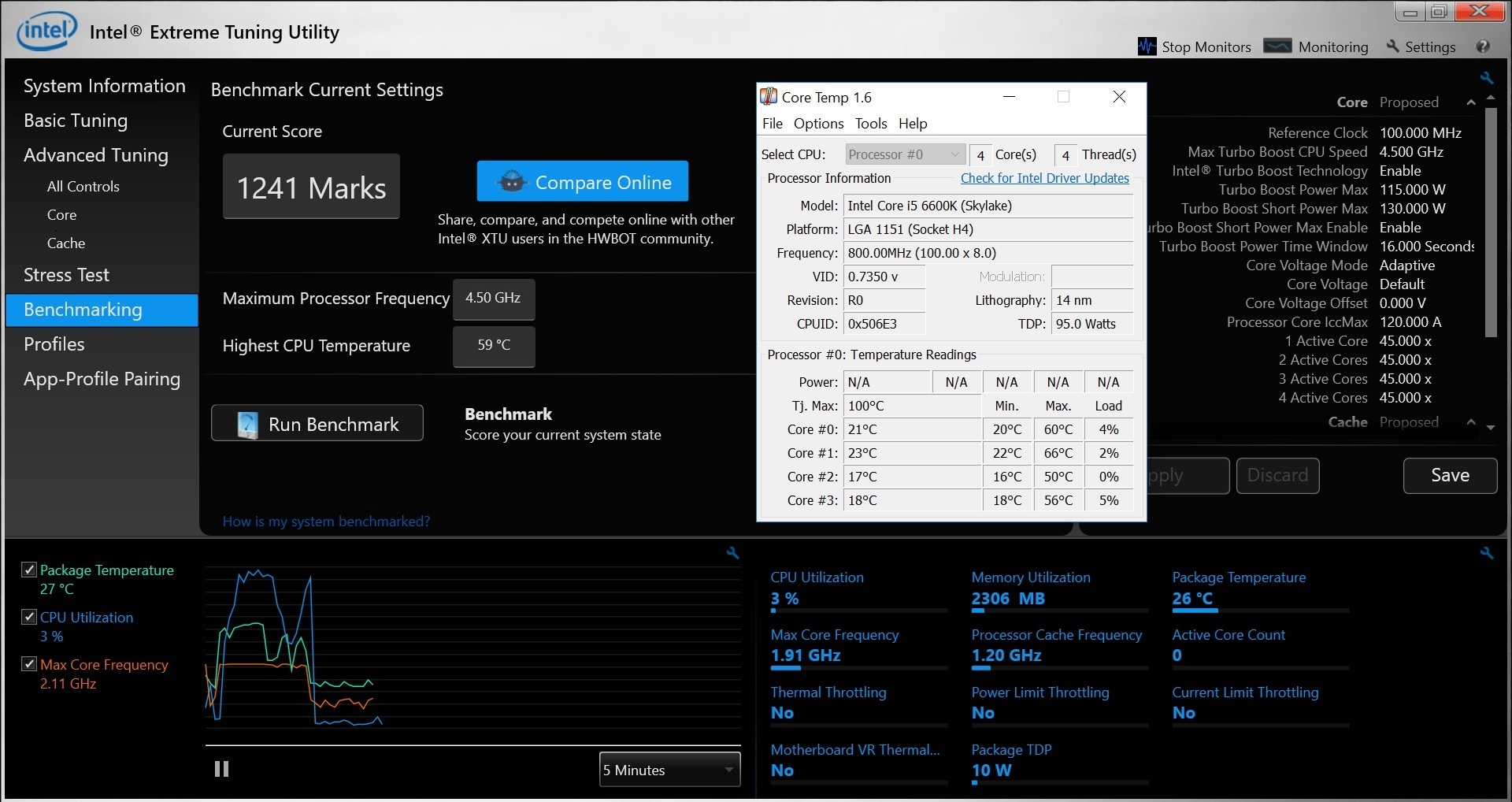 Assassin’s Creed Origins has a built in benchmark suite and the game is a demanding title on the CPU side as well. 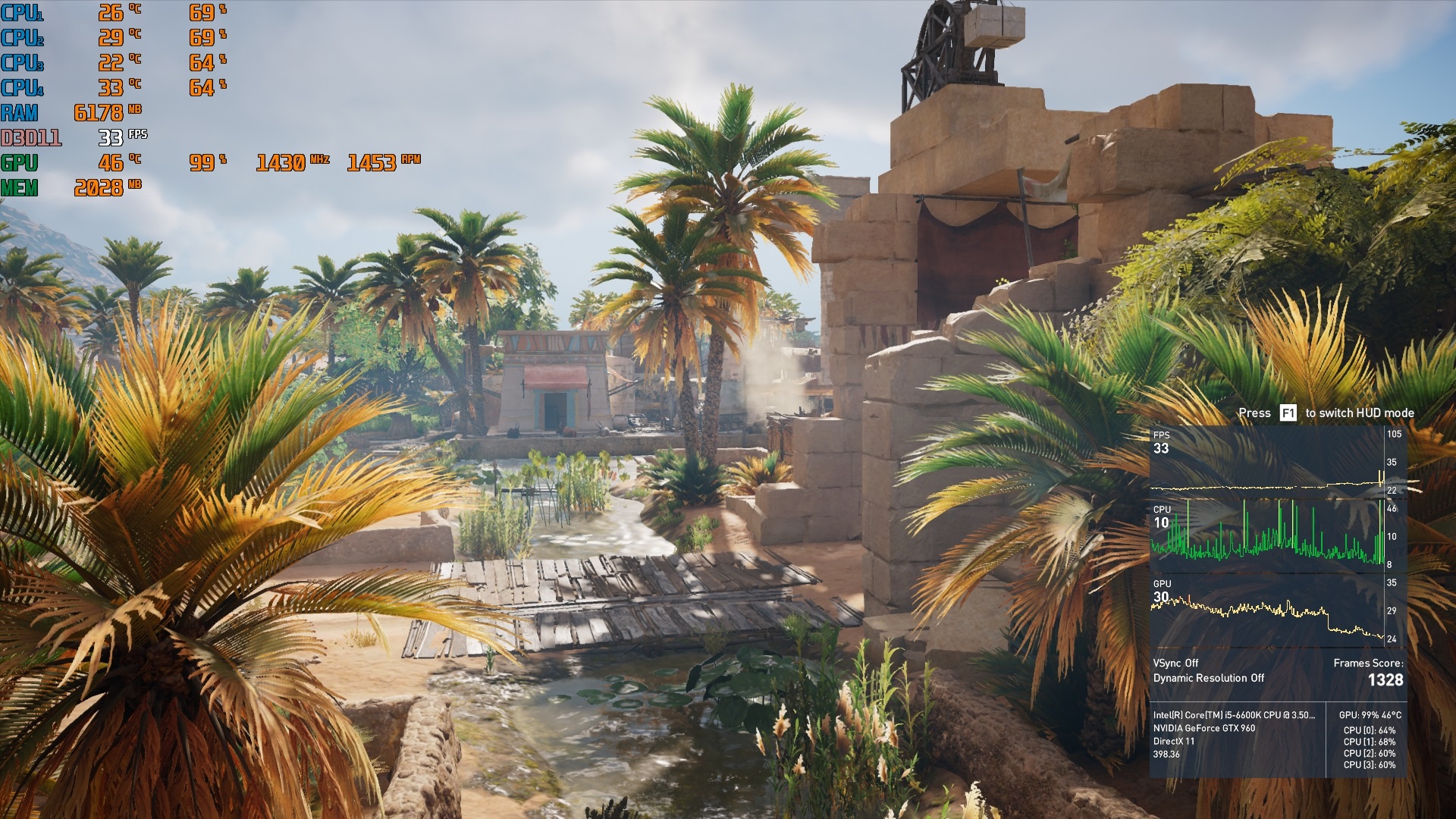 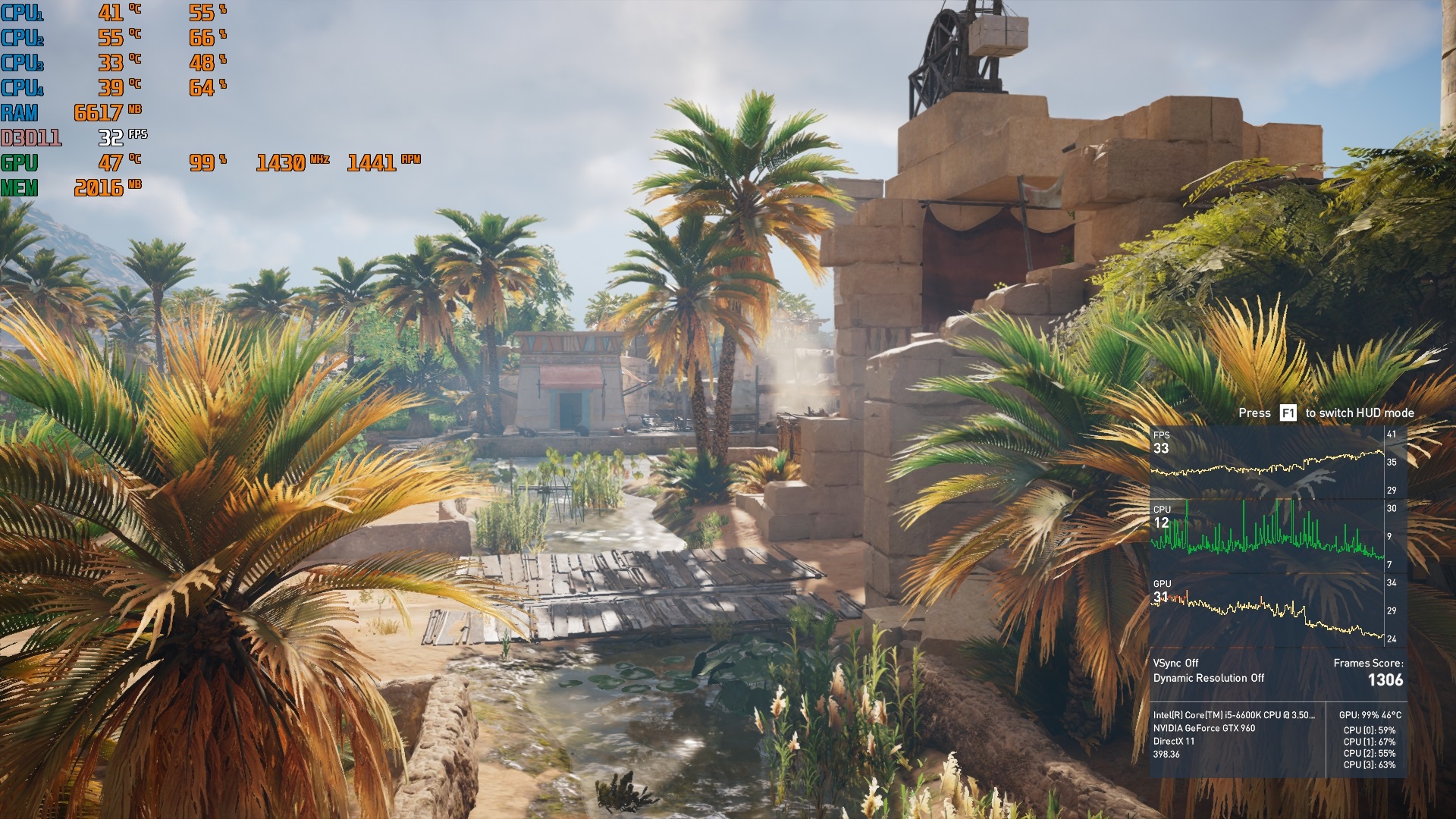 Now it’s time to interpret all of the data. We will record the average value per all 4c/4t in each test.

Well, as for the overall temperatures, our results pose no surprise. The BeQuiet! 360 mm AIO beats everything and is our number #1 most performing cooling solution for this test system. Nothing major changed since our last testing session, mostly the ambient temperature went down by one degree and thus we noticed a few variables changing.

At stock CPU settings, the temperatures are ridiculously good, way overkill not to overclock your CPU on this AIO setup. So, OC it is. Even here, it climbs the scoreboard all the way to the top. This got me hyped and will get a Threadripper platform to give it a final test ! I will update the results in this review when done.

Finally, as for the noise tests let’s see if that extra one fan made it worse or better: 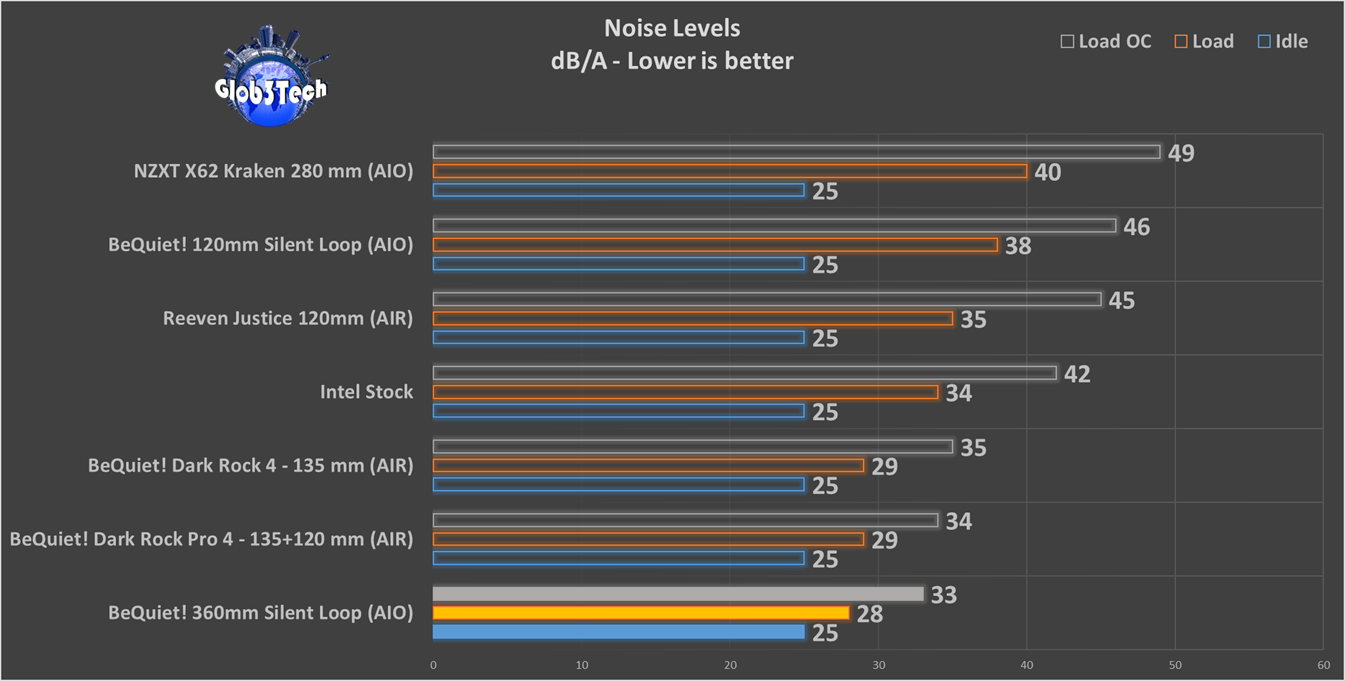 At full chat 100%, 3 fans will be louder than a 2 fan setup; there is no debating that – but in out tests because everything was set on auto RPM fan curve, 3 fans will work spin less since they divide the heat better. So the 360mm AIO won yet again. I am not joking at all, you can’t hear anything ! And this was without the tempered glass panel installed, I tried to stick my ear as close as I can get to the fans and pump – nothing ! After 60 degrees Celsius when the GPU starts to spin its fan and this EVGA SSC model is very silent, still it was the ‘noisiest’ component. That right there, is epic my friends.

As promised, let’s see how this 360 AIO will cope with a big AMD chip. First and foremost, any AIO from BeQuiet! requires this adapter kit so you can mount it on the new TR4 socket – https://www.bequiet.com/en/press/23847

Thus we built a new system as follows:

As per the Intel tests, we will do the same methodology minus the Intel Extreme Tuning Utility, which doesn’t work on this system.
For now, this will be a standalone test only at the overclocked value since we don’t have anything else compatible in the cooling department with the new TR4 socket.

These are the idle temperatures after 15 minutes of inactivity. 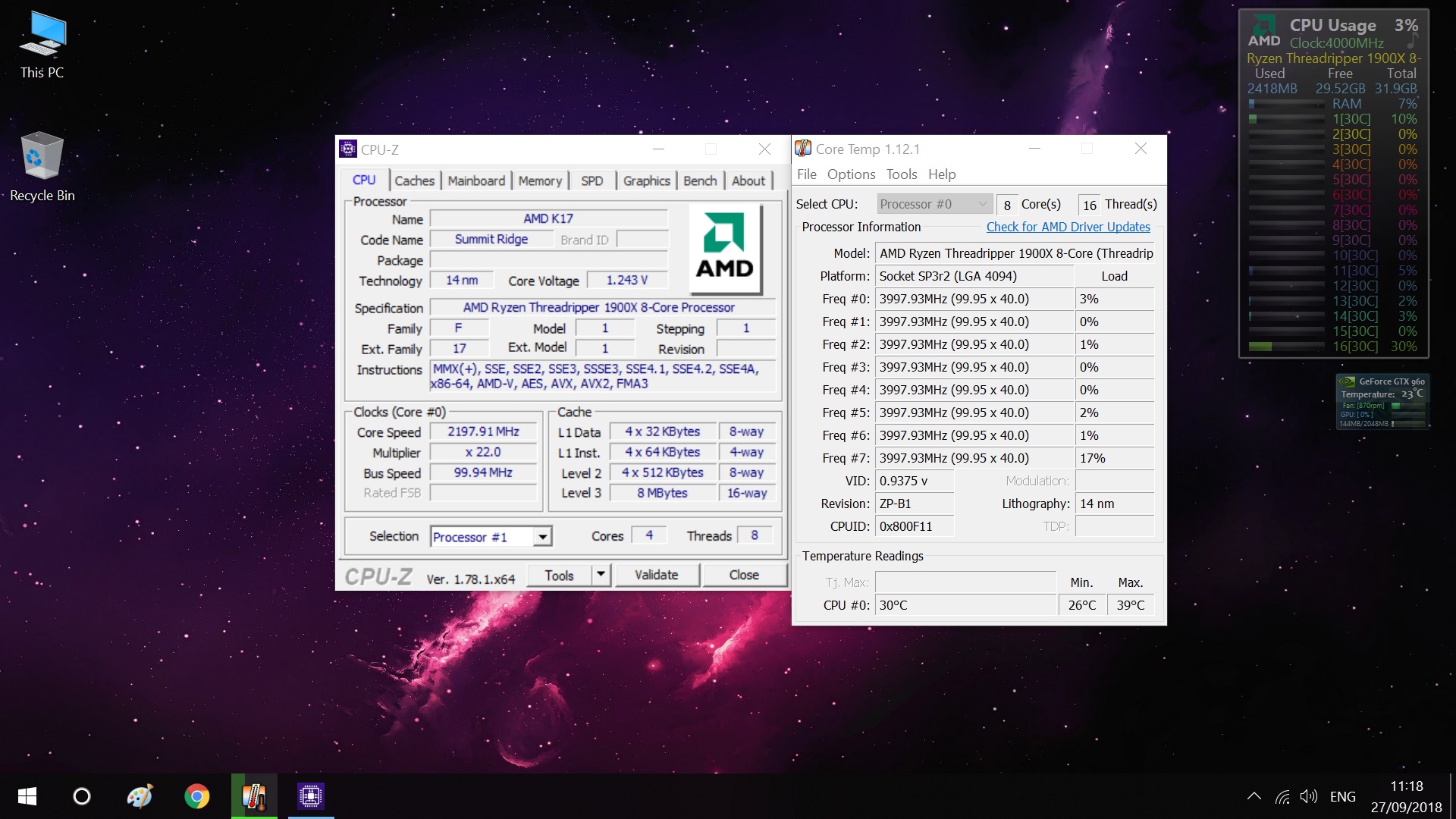 Then a run in Cinebench R15. 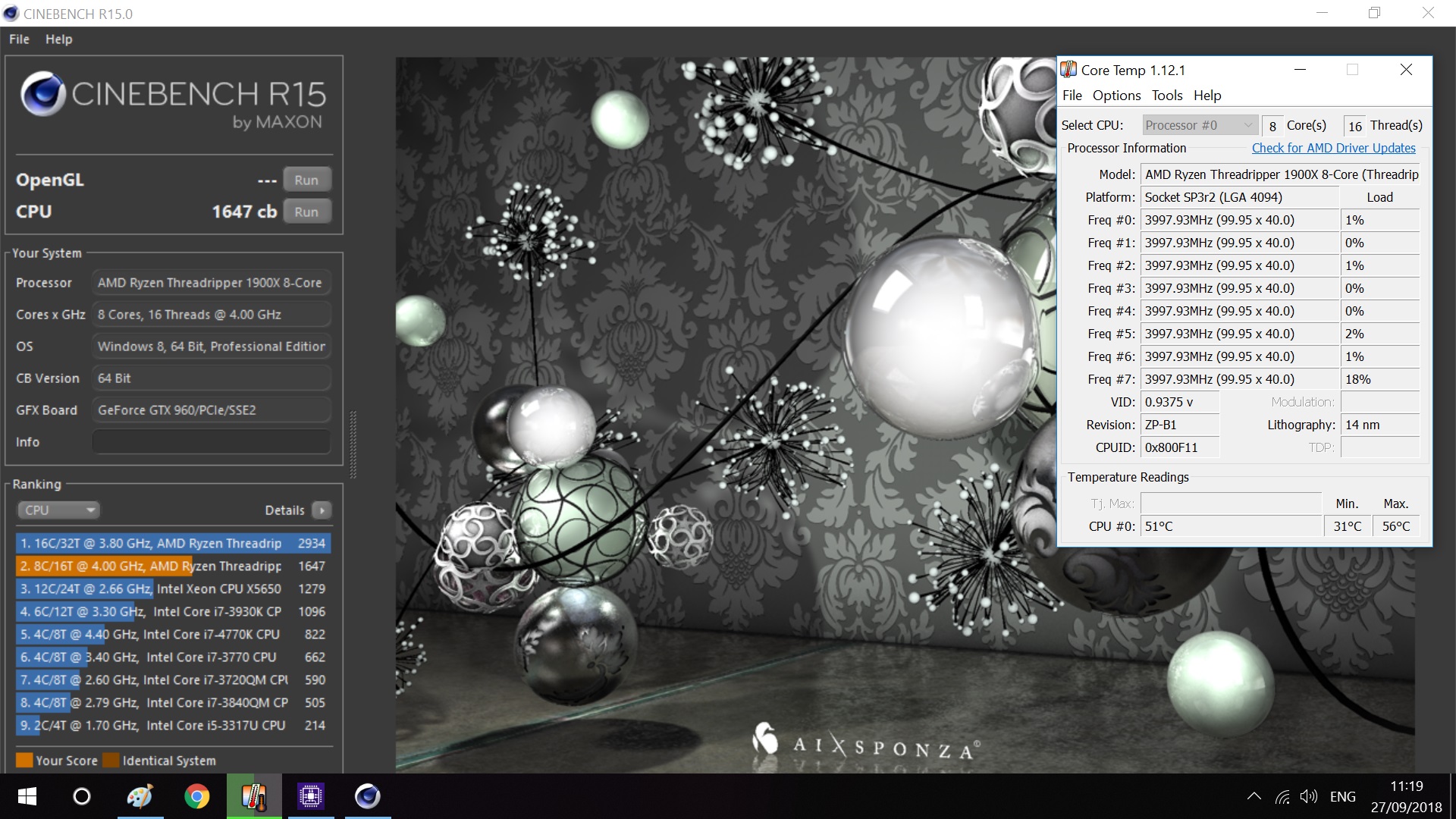 Next was the built-in benchmark in AC Origins. 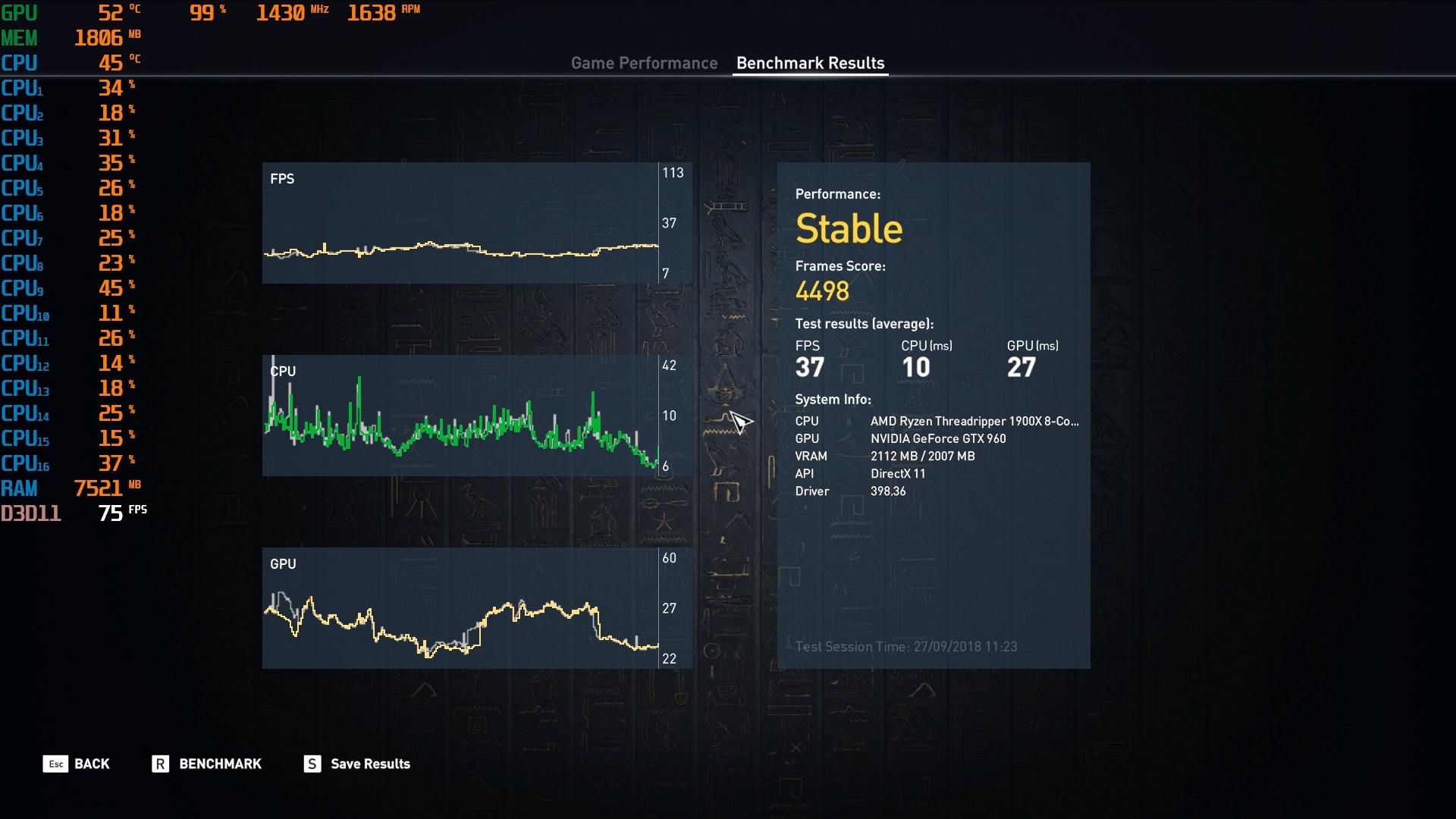 Finally, the torture test via Intel Burn Test with a ‘5 times’ run at High settings. 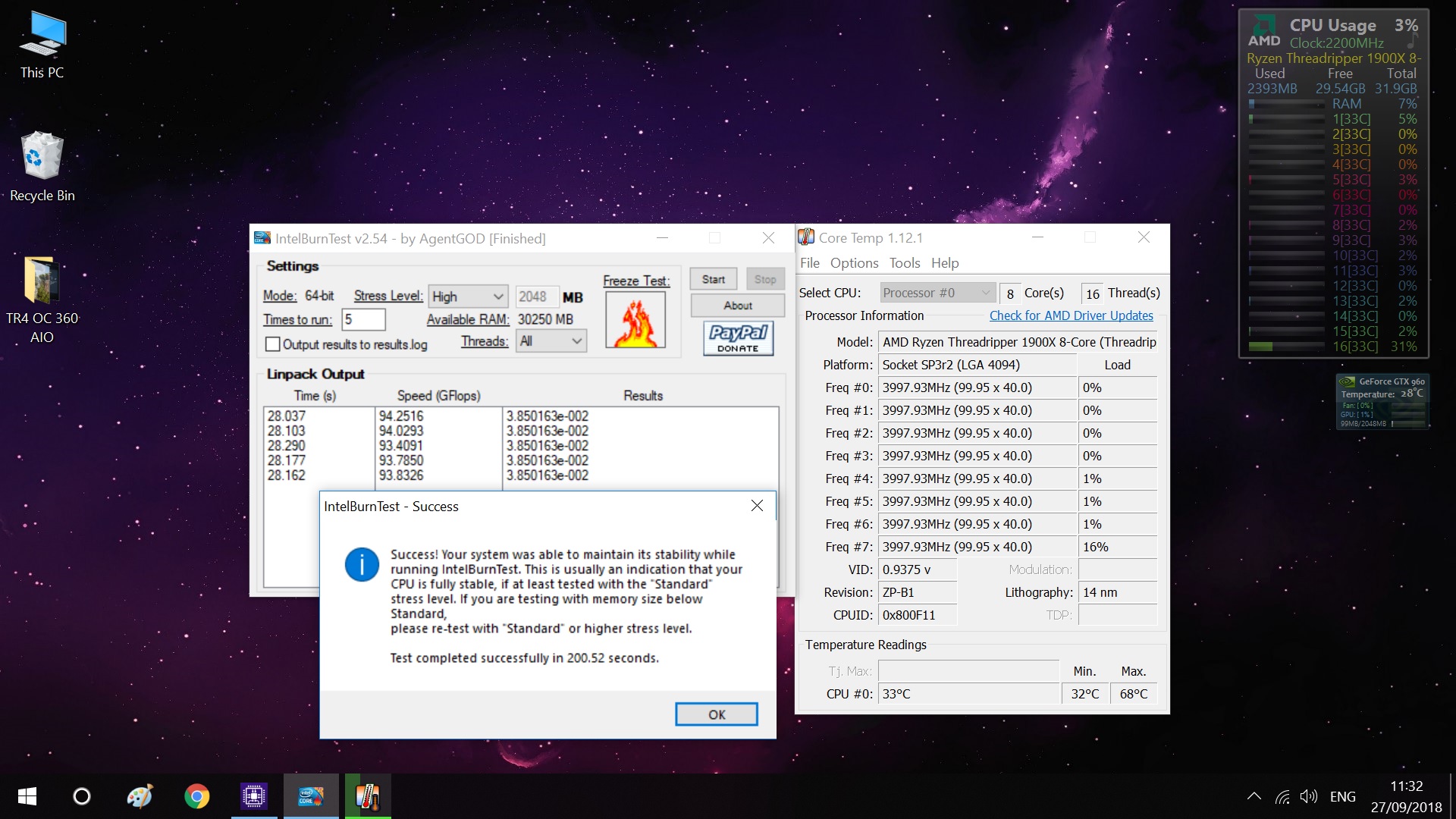 Well, here they are, as mentioned, in a stand alone situation, for now.

As for the noise, we compared the numbers to the Intel tests. 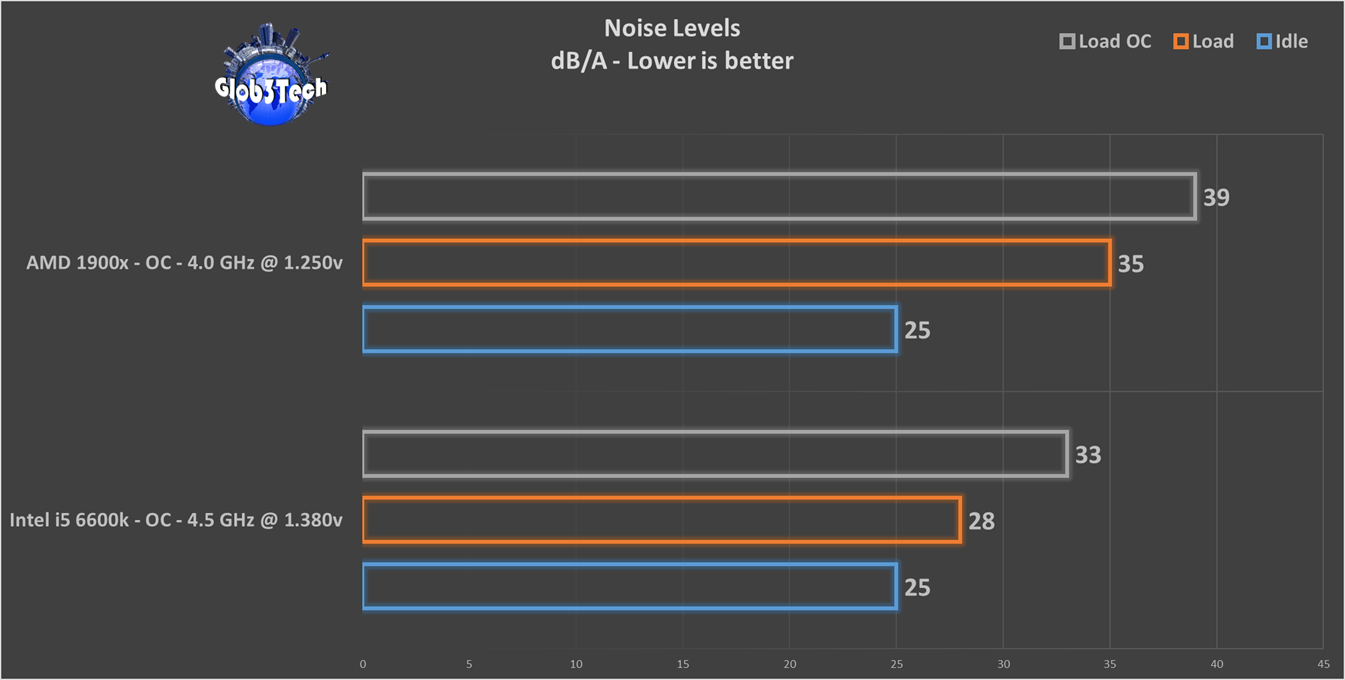 Given the fact that this AIO like all AIOs from BeQuiet! have the contact plate much smaller than the actual new Threaripper chips, I have a felling it should have performed much better if it was the full surface.

Overall, the 360 AIO Silent Loop still managed to keep the 8 core CPU even at an overclocked at 4 GHz in a torture test under 70 degrees. The only drawback of course was more noise but that is understandable since the original tests were on an i5. But still the overall noise levels in gaming and workload were good.

Not many years ago, a water cooling solution usually was a custom job and thus a very expensive task. But for most people, a plug and play solution was needed. Today, when companies like BeQuiet! bring to the market something like the Silent Loop 360 mm AIO that is a complete package for a fraction of a cost of a custom loop, what more could you want? It performs and cools really well, all of this while it is dead silent. Noticeable only in an OC scenario on the AMD Threaripper tests under heavy workloads or torture testing. (update 27.09.18) Backed up by a 3 years warranty, a sexy minimalist look, with a straightforward installation process, a low profile & reverse-flow pump – this a must have choice if you are not into the bling bling RGB rave and want something of quality that will tick all the boxes.

– Should have included a mounting option for the TR4/SP3r sockets as well, given its cooling potential
– At over 75-85% RPM load the noise becomes noticeable

Glob3trotters “Complete Package” Award – 5 out of 5