Be Quiet! Dark Rock Pro 4
The Big Brother is Here! 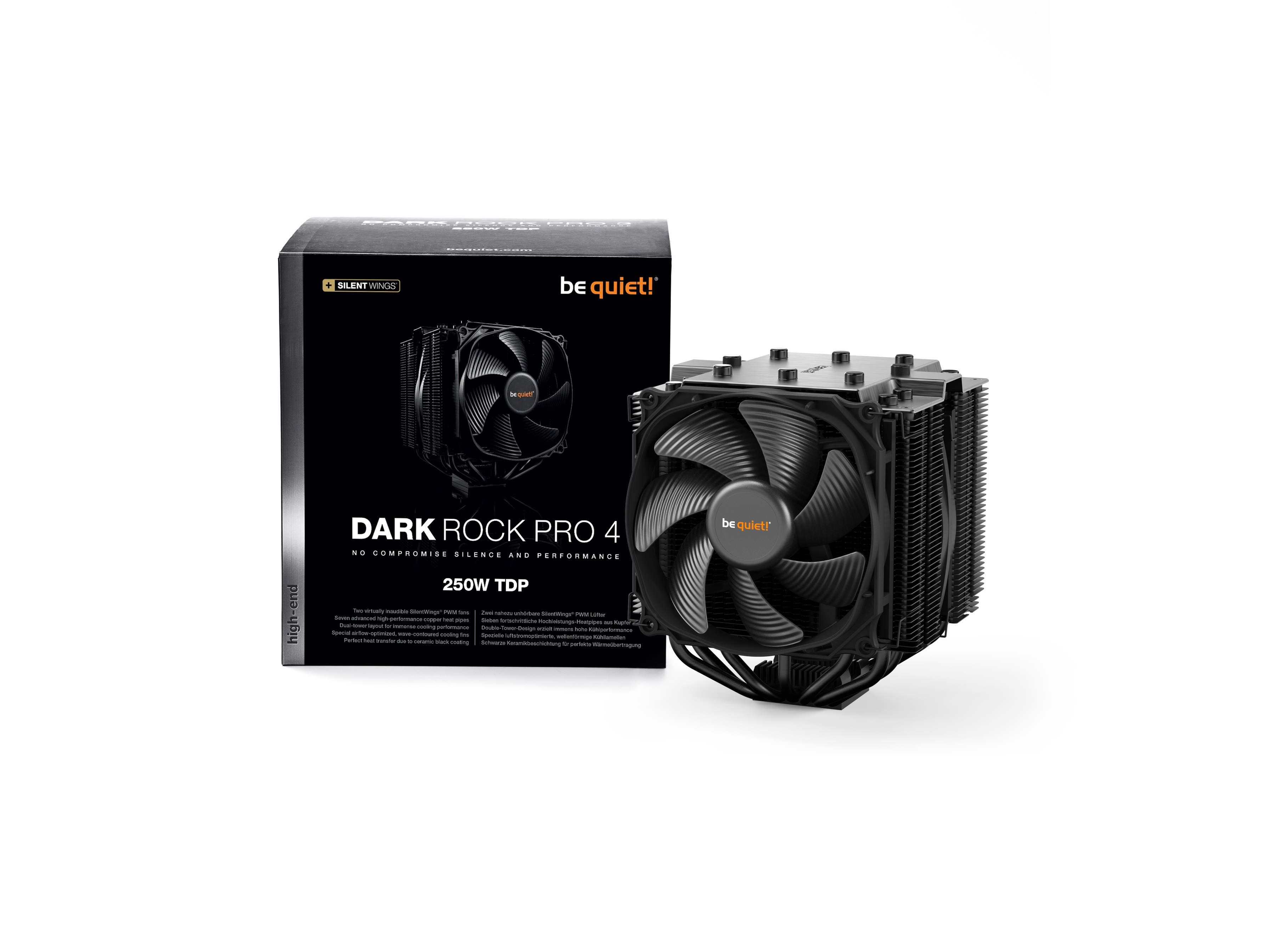 There is always something bigger out there. Case in point, the dual tower version of the previously reviewed Dark Rock 4. With the Pro, they sent the standard one to the gym to bulk up and thus we have an air cooler capable up to 250W of TDP, while still promises near inaudible operation.

Below we have the prices from three different currencies, from Amazon. 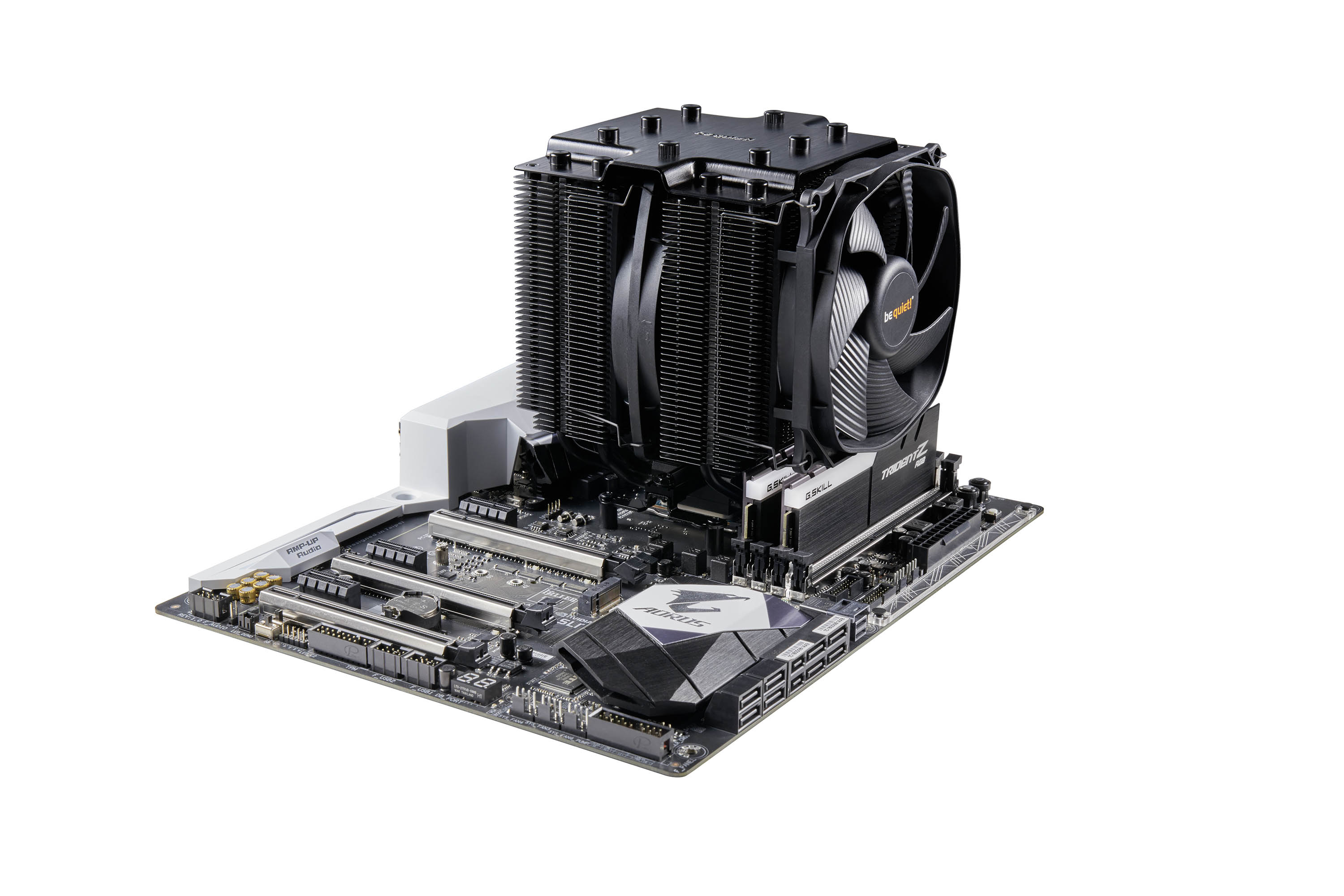 Now let’s have a look at the main specs and more importantly compared to the single tower version. 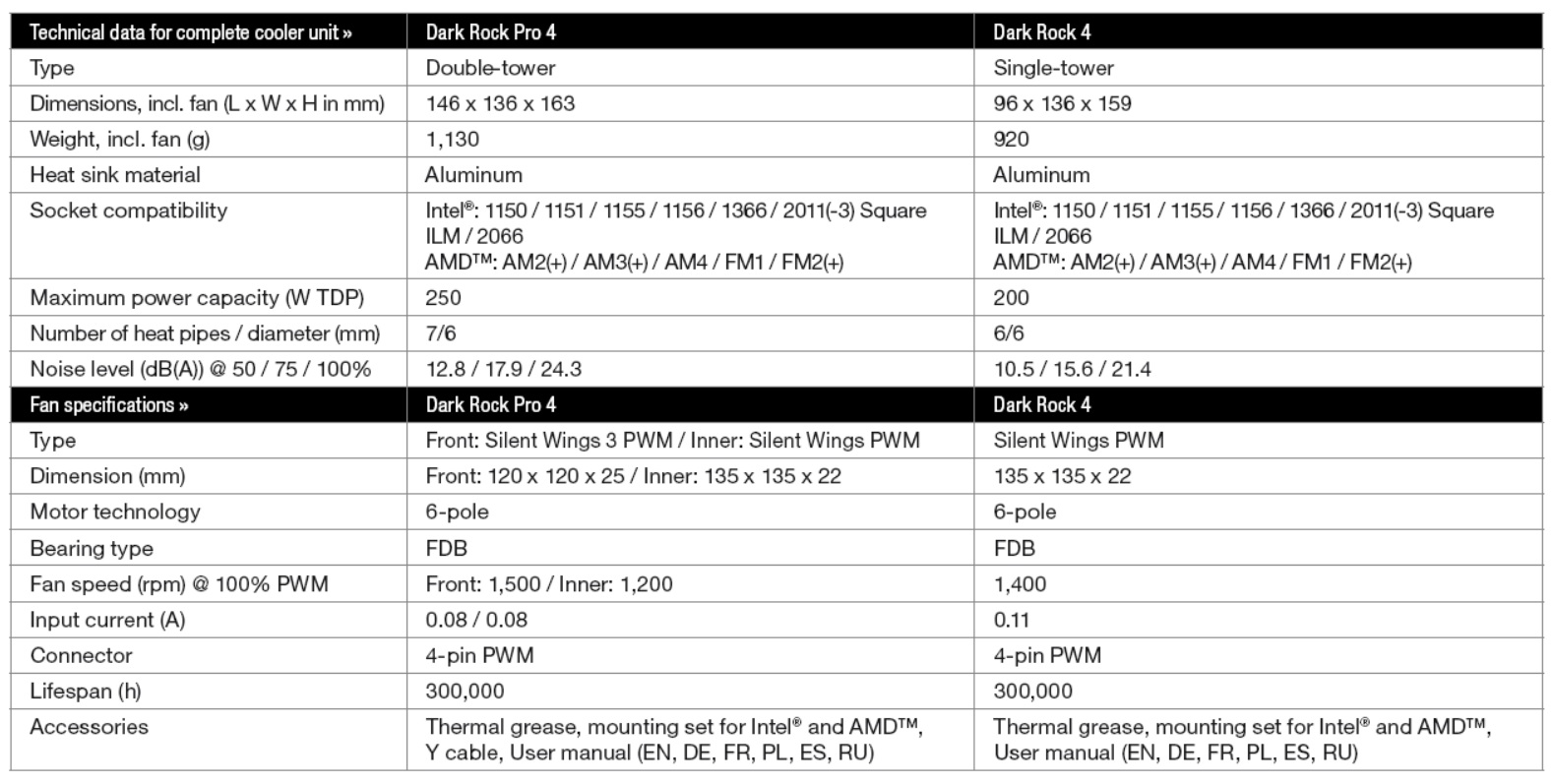 So with the Pro we gain one extra heatpipe, one extra tower of fins of course, one more fan (a 120 mm on the front while the 135 mm is in the middle) and a theoretical higher TDP threshold at 50W more. This should be very interesting to see if it still is a dead silent product.

The trademark BeQuiet! packaging them is present once more. The TDP value is highly visible to show that this is no ordinary air cooler, if the professional and bold look of the box didn’t give you enough hints.

The other sides covers the main highlights and the specs.

The heatsink is very well protected inside and nicely organised.

One of the fans is already pre-installed while the other is only placed in his intended location because you will need to attach him last due to the installation sequence.

The accessory box has is divided in a booklet type storage with one side housing the manual in 5 different languages while the other has all the multi socket installation parts.

This is everything you get besides the Dark Rock Pro 4 heatsink:

The same construction quality and attention to details is present like in the single tower version. We count 7 heatpipes distributed in an U shape pattern between the two towers.

The top plate is a thing of beauty, is massive and locks into place the whole heatsink. But it is also incorporate a cleaver yet simple design to help you with the installation. More on this later on.

Now if we have a look at the base plate we discover the same flat nickel plated base plate without the mirror finish.

The opposite side has these extra fins for more heat dissipation. Also the lower ones help to secure the heatsink down. Speaking of, let’s move to the installation process.

This is almost identical to the Dark Rock 4 as far as the installation process goes; ‘almost’ because I would recommend to do this while the motherboard is out of the case. Why? Because it is a little hard to attach the second metal clip to secure the inner fan. It can be done in the case like I did as well, but takes some advanced finger gymnastics. Nonetheless, let’s go over it one more time.

Step 1 – Choose the parts for your desired socket. In my case, Intel’s LGA1151. Attach the securing bolts on the backplate with the rubber grommets as well. Then install it on the motherboard.

Step 2 – Secure the backplate on the opposite side with the appropriate standoffs.

Step 3 – Add the mounting brackets in accordance how you want to orientate the heatsink. Then add the thermal paste. The included mini syringe is exactly what you need for a single use.

Step 4 – Remove these top two ‘fake’ caps because through the holes is how you are going to bolt down the heatsink. Then do just that via the middle securing bridge plate.

Step 5 – Install the middle 135 mm fan and either plug both fans in different ports if the motherboard has enough or use the included Y-splitter.

No more RAM clearance issues this time even when using RAM with a moderate height hearspreader.

Everything looks so sexy in black !

The CPU will be tested in 2 main scenarios: at stock settings and then we will overclock it as high as we can. For both scenarios we used the Intel Burn Test utility, set at High stress settings, as the main torture test, for 10 minutes. Any results over 90° C in any condition are considered a fail.

Room temperature was a recorded ~ 21°C.

The thermal paste used was the one that came with the included bundle of the Dark Rock 4 Pro.

We will compare the results of the Be Quiet! Dark Dark 4 Pro between a 120 mm air cooler, then another two Be Quiet! products and a 280mm AIO cooler. I will employ a synthetic test in Intel Burn Test to simulate a theoretical absolute load on the CPU which will dump the most heat and fully test any cooling system’s potential.

First let’s record the idle temperature and noise output with the CPU at stock setting. Then with the CPU overclocked at 4.5 GHz with 1.380v. 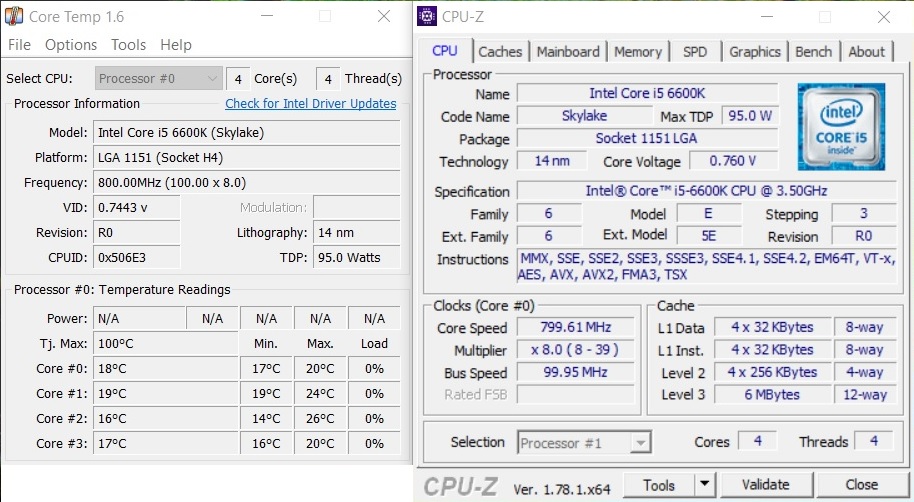 This i5 CPU isn’t that lucky on the ‘genetic’ silicon lottery so it requires a lot of voltage to have 4.5 Ghz stable. Nonetheless, a good test for the Dark Rock Pro 4 to see how it performs. 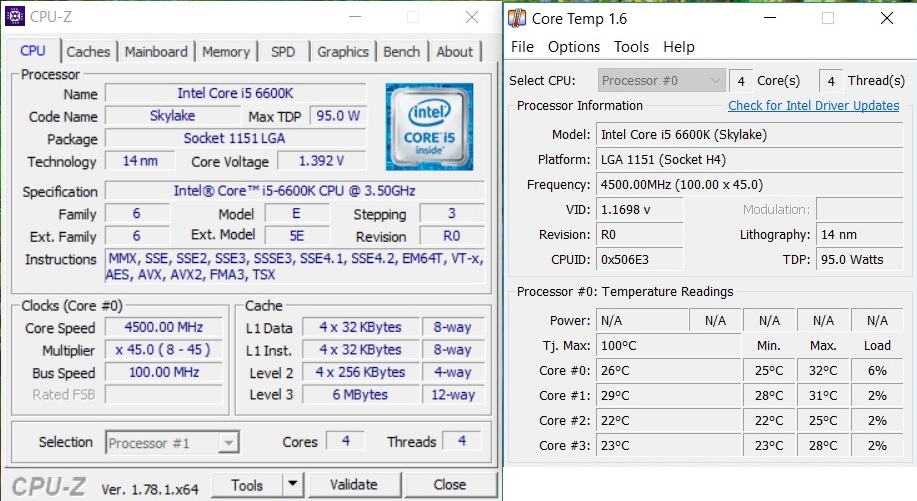 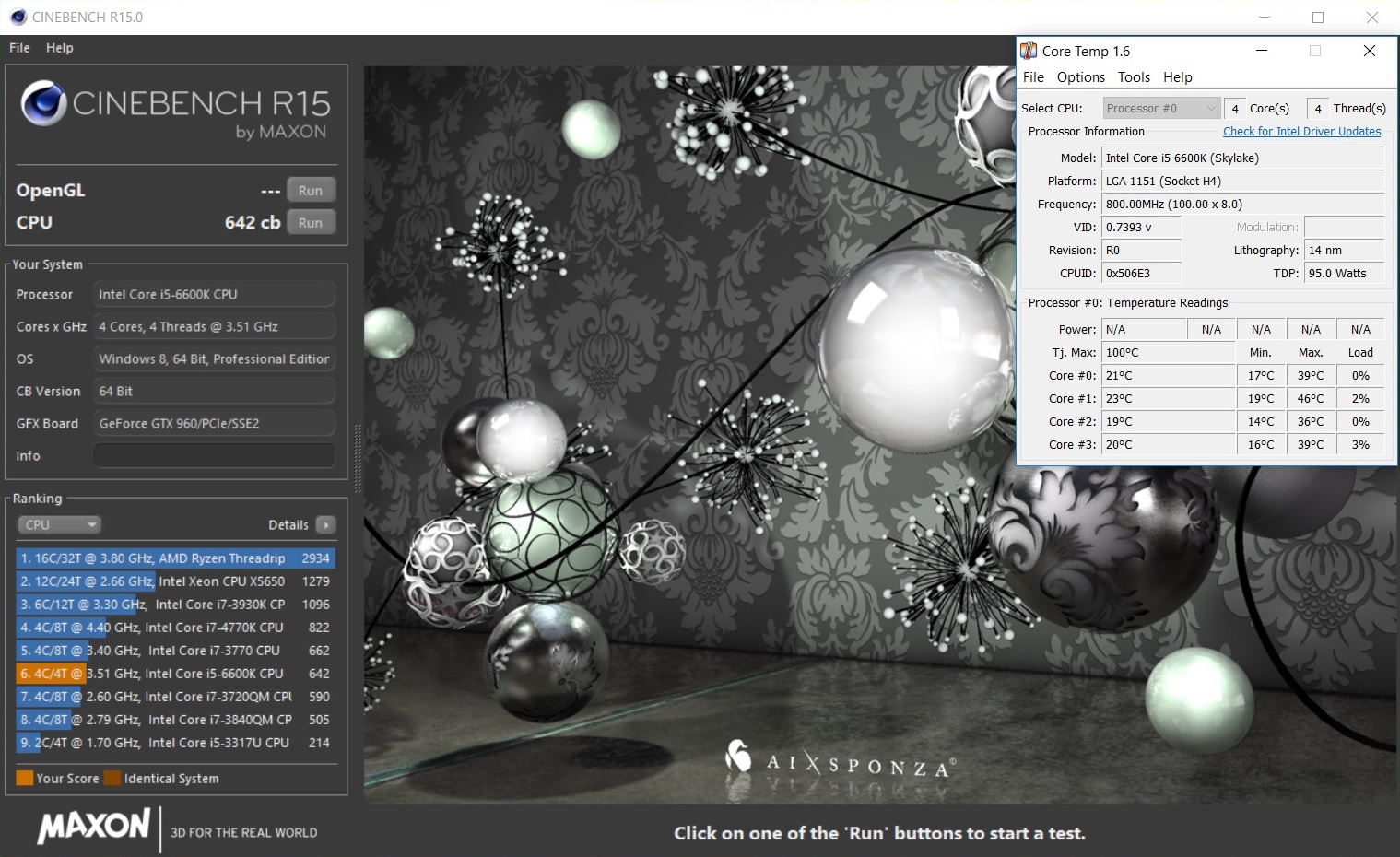 Same overclock value and the fans for the BeQuiet! Dark Rock 4 Pro are always set with the auto fan curve via the motherboard’s settings. 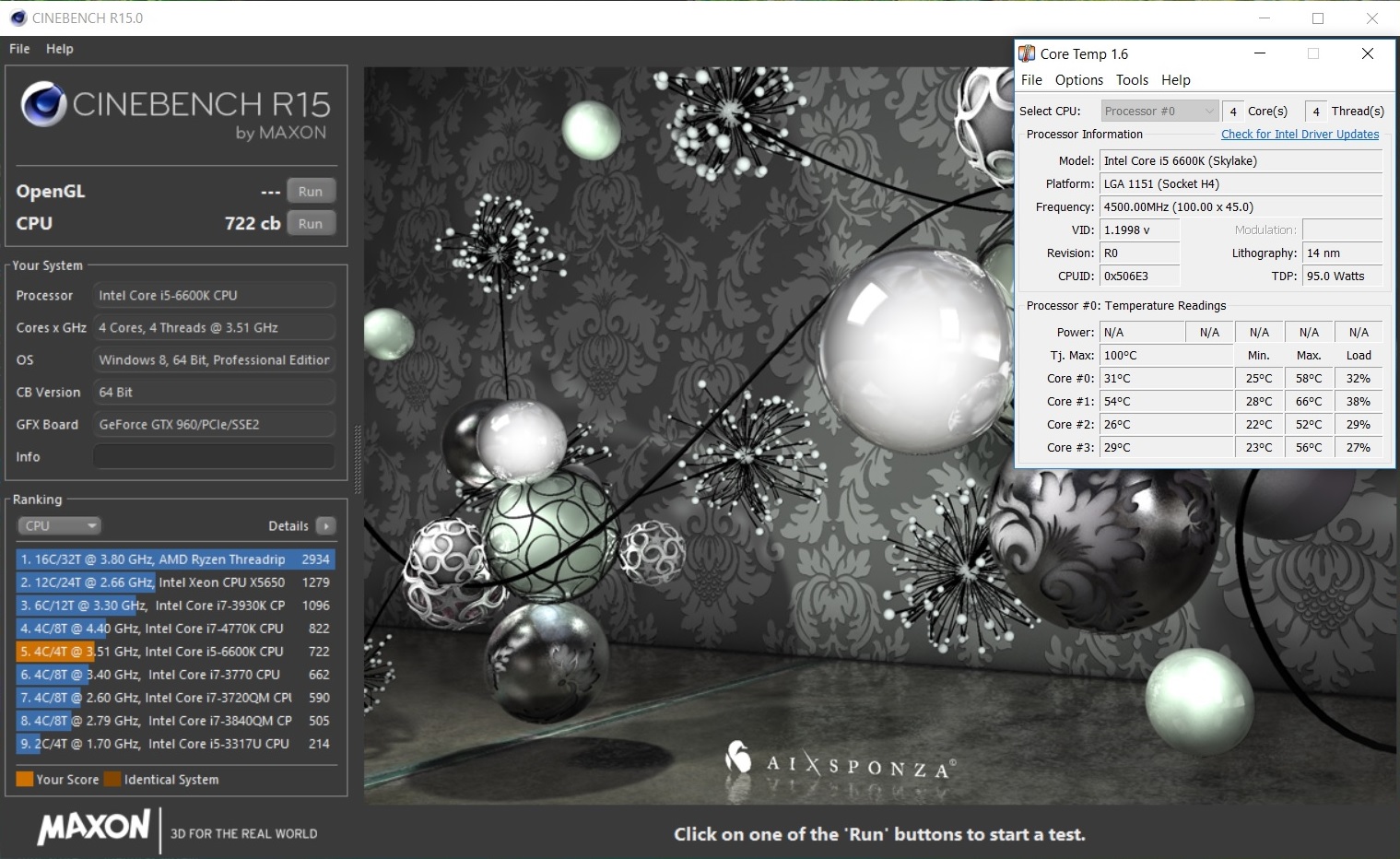 Next up we have Intel’s Extreme Tuning Utility built-in benchmark tool. As always, we will centralize all of our findings. 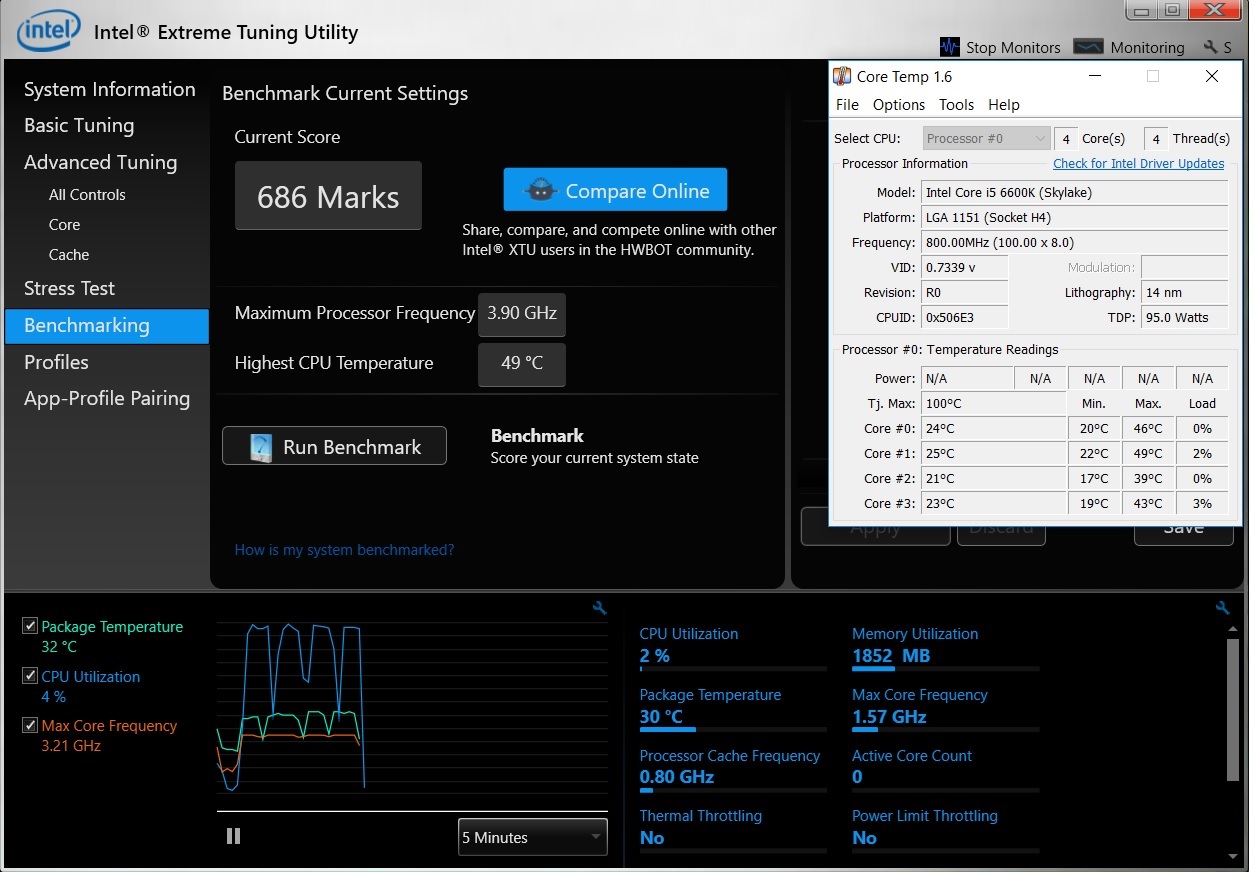 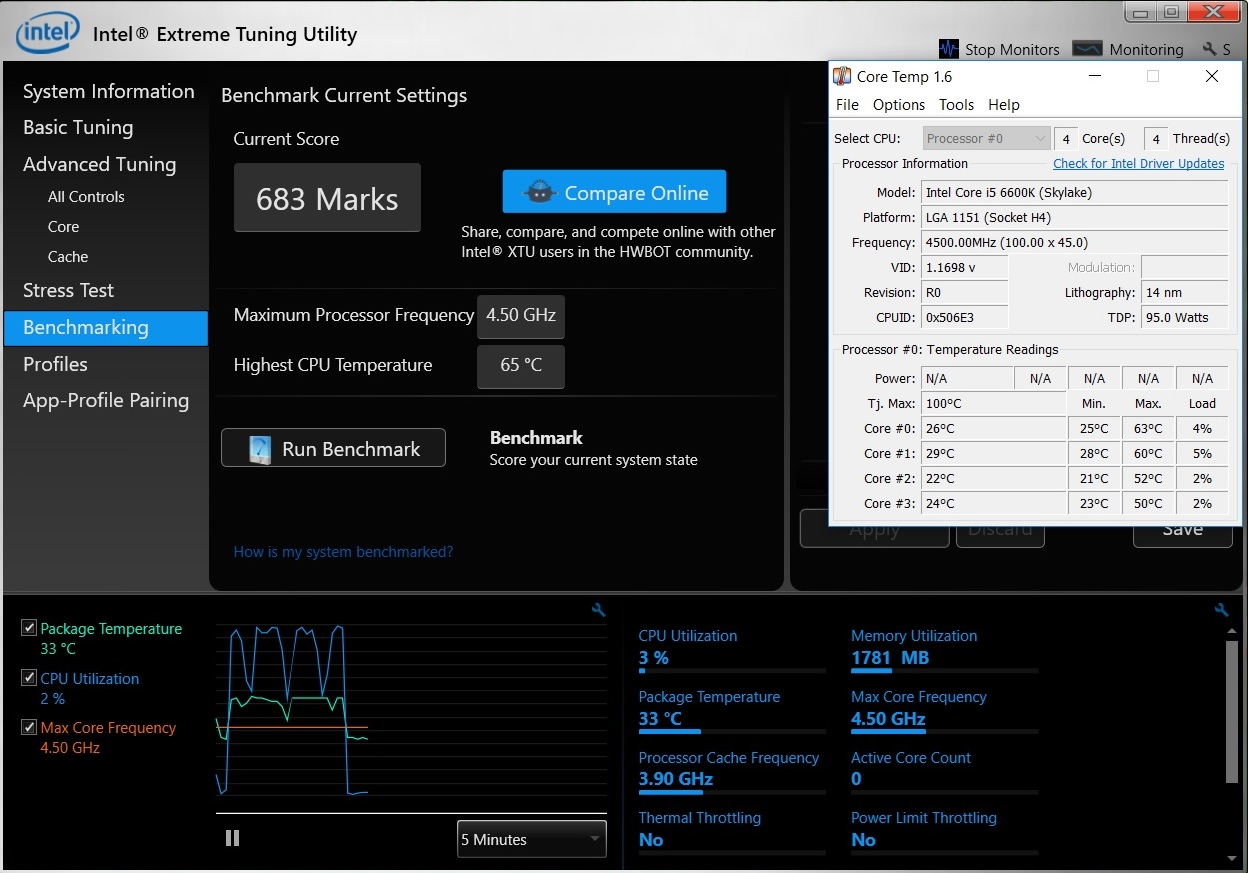 Love this game, not just for the fact that it has a built in benchmark suite, but for the overall gaming experience as well. 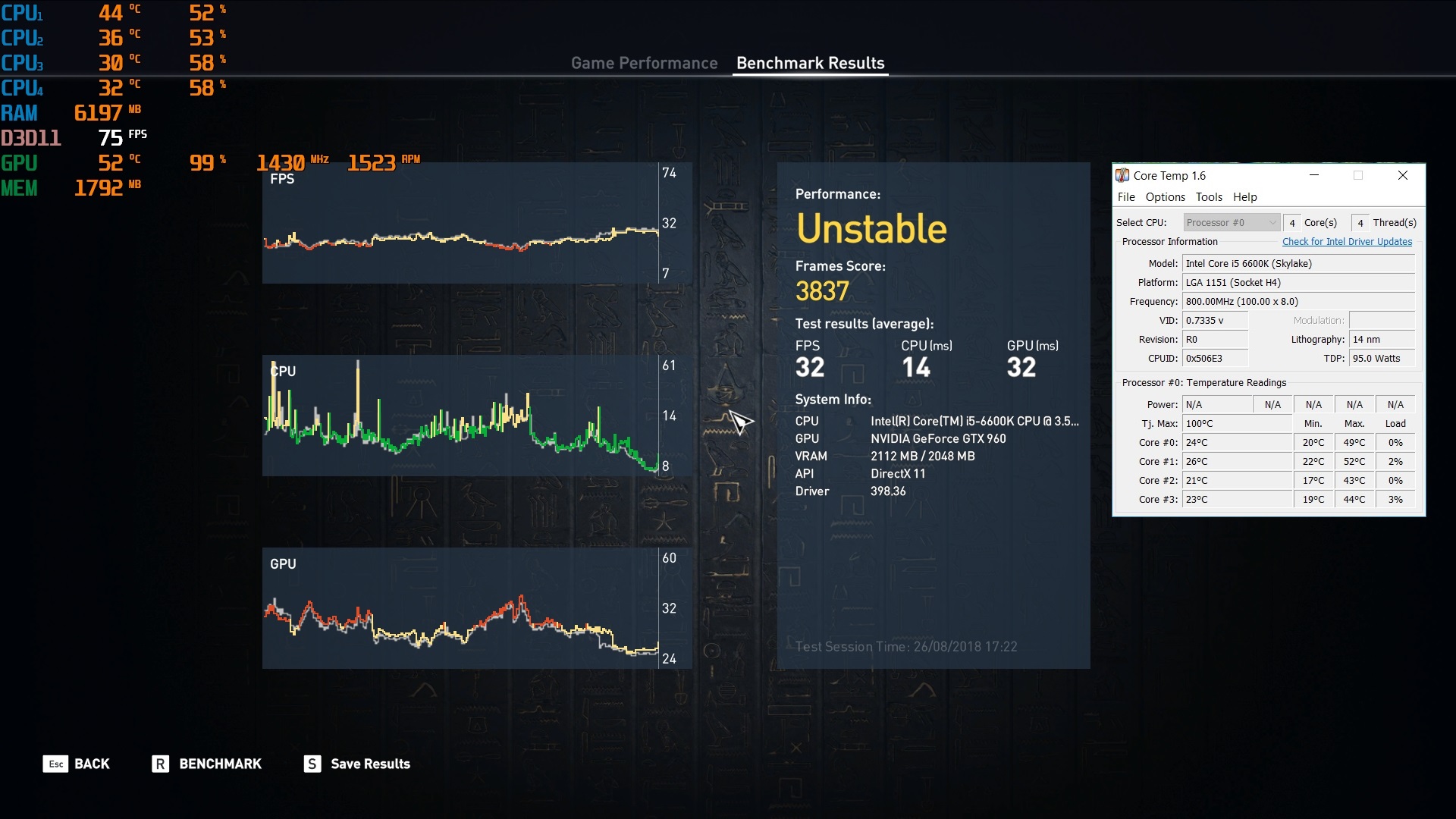 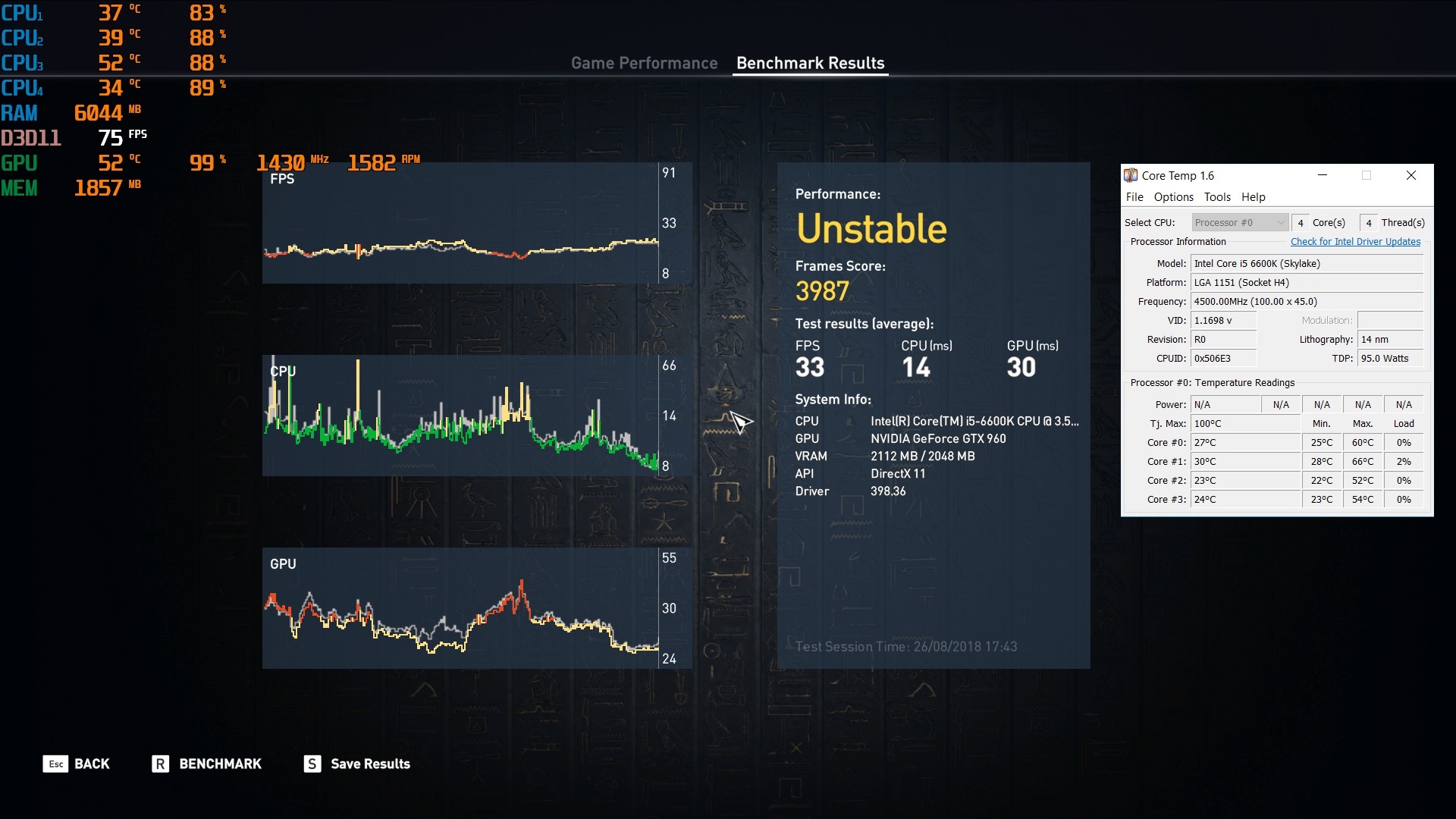 Now it’s time to interpret all of the data. We will record the average value per all 4c/4t in each test.

Things are crystal clear, the Dark Rock Pro 4 is not bigger in size just for show. That extra cooling material shows its potential being even better than a 120 mm AIO! If that wasn’t enough, it gets close to the 280 mm AIO and it even beats it in some tests which is is absolutely bonkers.

Last test is to see if that extra fan brought a trade off in noise. 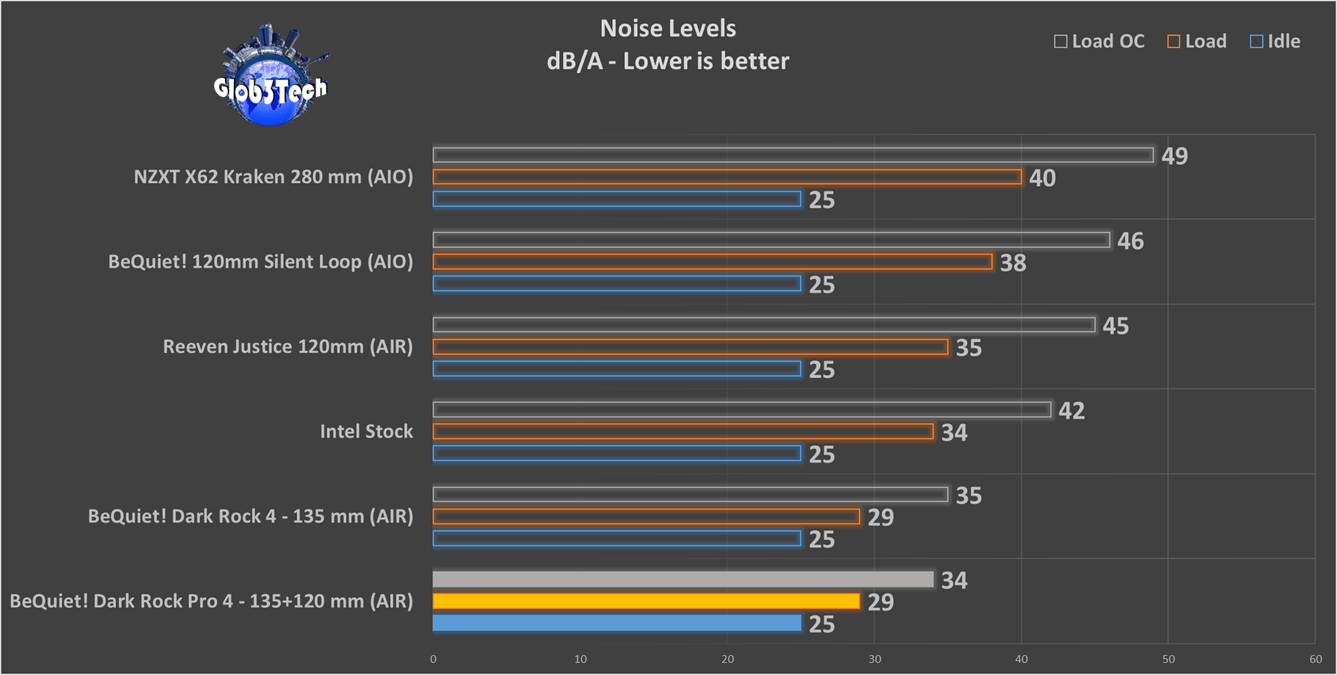 Well, no. On auto settings, letting the motherboard decide what to do, things are pretty much equal to the smaller brother. Be Quiet! know what it is doing when it comes to noise output for sure.

The brand convinced me that they do a lot of research and testing before they released these products. Very few air coolers can tick so many boxes from performance in both areas (noise & cooling) while providing such a great bundle, epic build quality, such a professional industrial and cool design. The Dark Rock Pro 4 is a big cooler make no mistake but we didn’t discover that there is too much hassle with installation since it employs a clever design and providing the perfect tool for the job. The fans are overbuild and as per their claims will outlast many builds to come. It will handle anything you throw at it and such a shame they don’t have a version with an increased base plate like Noctua for the Threadripper socket give how much cooling potential there is there when you do decide to crank up the fans. Still, Put everything together and this is what you get from the Dark Rock Pro 4 – one of the best, most silent and most complete air coolers around!

– Massive and heavy
– Should have included a mounting option for the TR4/SP3r sockets as well, given its cooling potential
– A little harder to install the second fan’s metal clip while the motherboard is in the a computer case

Many thanks to Be Quiet! for supplying us with this beast !