Be Quiet! Dark Rock 4
A new name for “Silence” 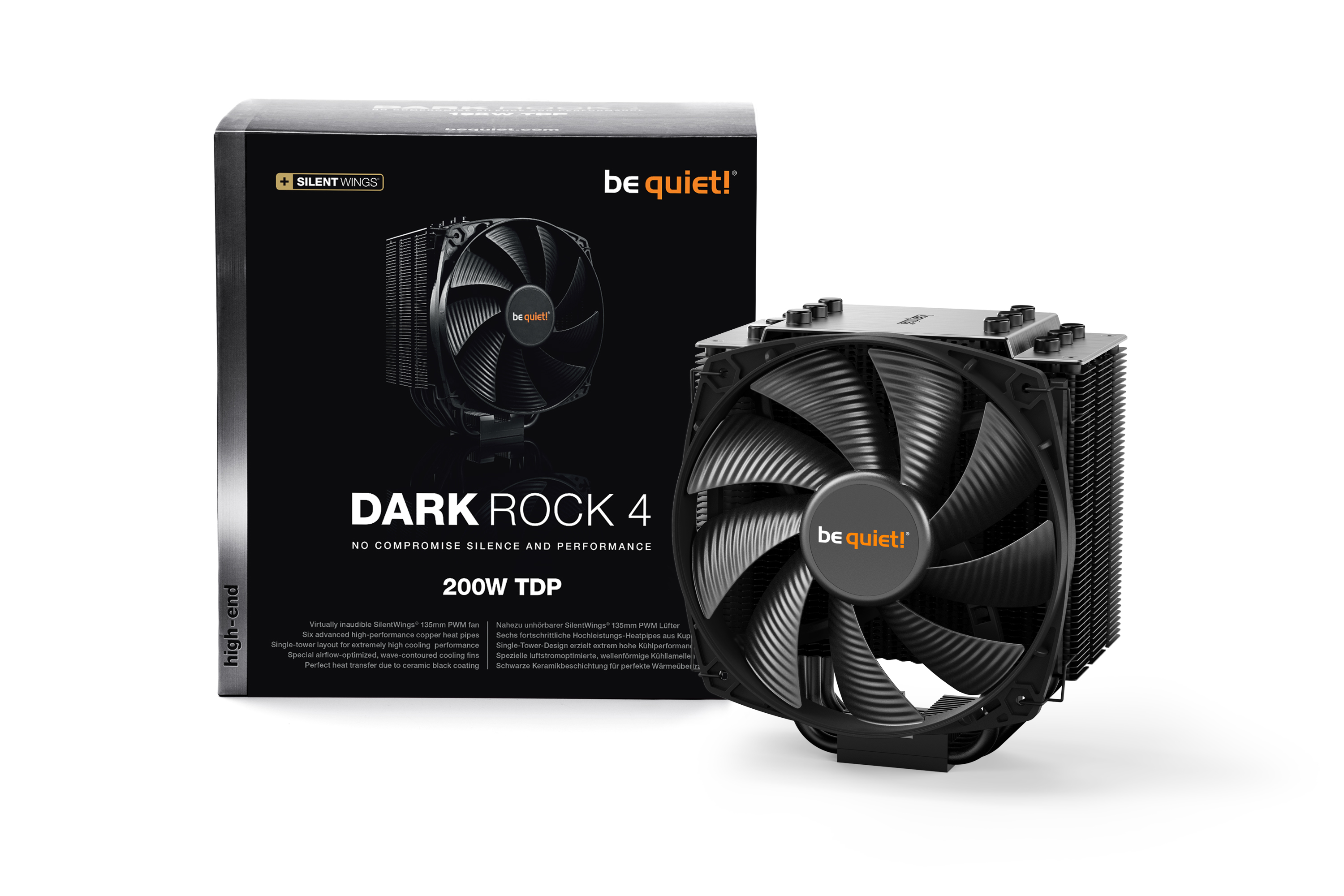 Despite the fact that AIOs (all-in-one cooler systems) are becoming more and more popular, the simplicity and effectiveness of a big ol’ chunk of metal air cooler is still a viable formula even today.

A great example is Be Quiet!’s Dark Rock 4, a solution that promises cooling performance up to 200W TDP and a virtually inaudible operation.

Below we have the prices from three different Amazon countries. 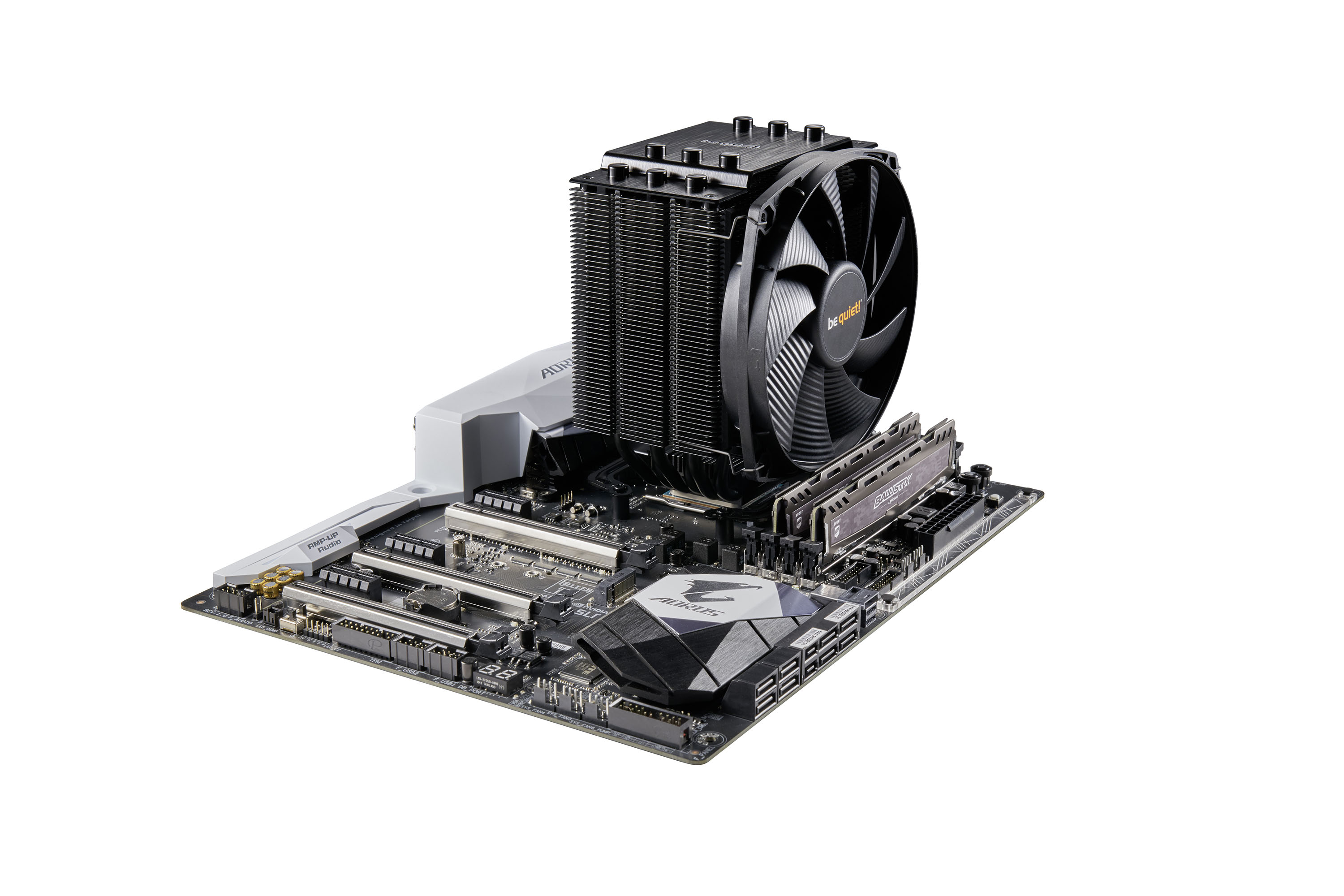 NO COMPROMISE SILENCE AND PERFORMANCE

So far, the Dark Rock 4 promises what seems to be the complete package for a single tower air cooler.

As for the technical specs, we see the following: 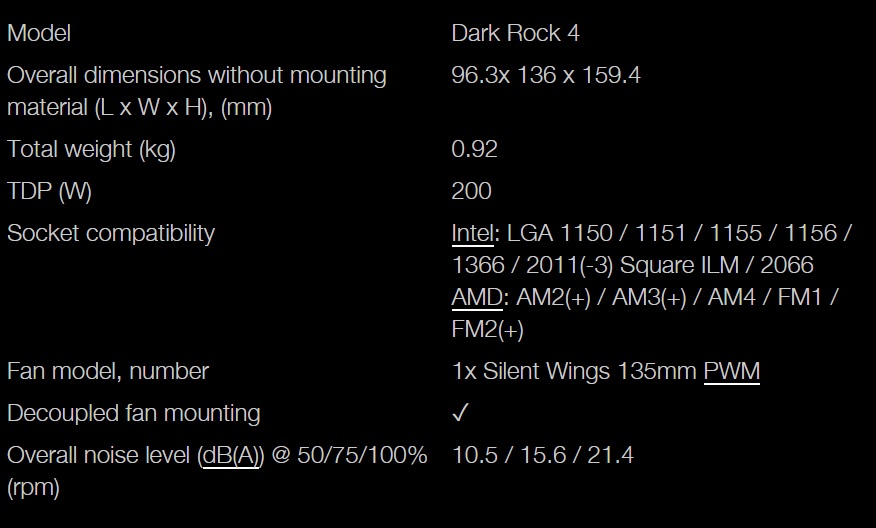 The main highlights include the fact that it supports all the major sockets from Intel and AMD and is just shy of 160 mm total height, the maximum number for most cases.

As for the heatsink, we shall soon discover it’s beautifully metallurgical sculptural design, which by the way, doesn’t just look good, but is there for a reason. The fan is even a custom size measuring at 135 mm, which is epic, along with fluid dynamic bearings this setup will outlast any future upgrades you wish to make to your computer.

Be Quiet! maintains the design philosophy as seen when we reviewed their 120 mm AIO, with a visual depiction of the product itself on the front, presented on an all black background.

Then all of the other sides feature the product highlights and complete specifications.

As you open it, you are greeted by the fan in its own box. 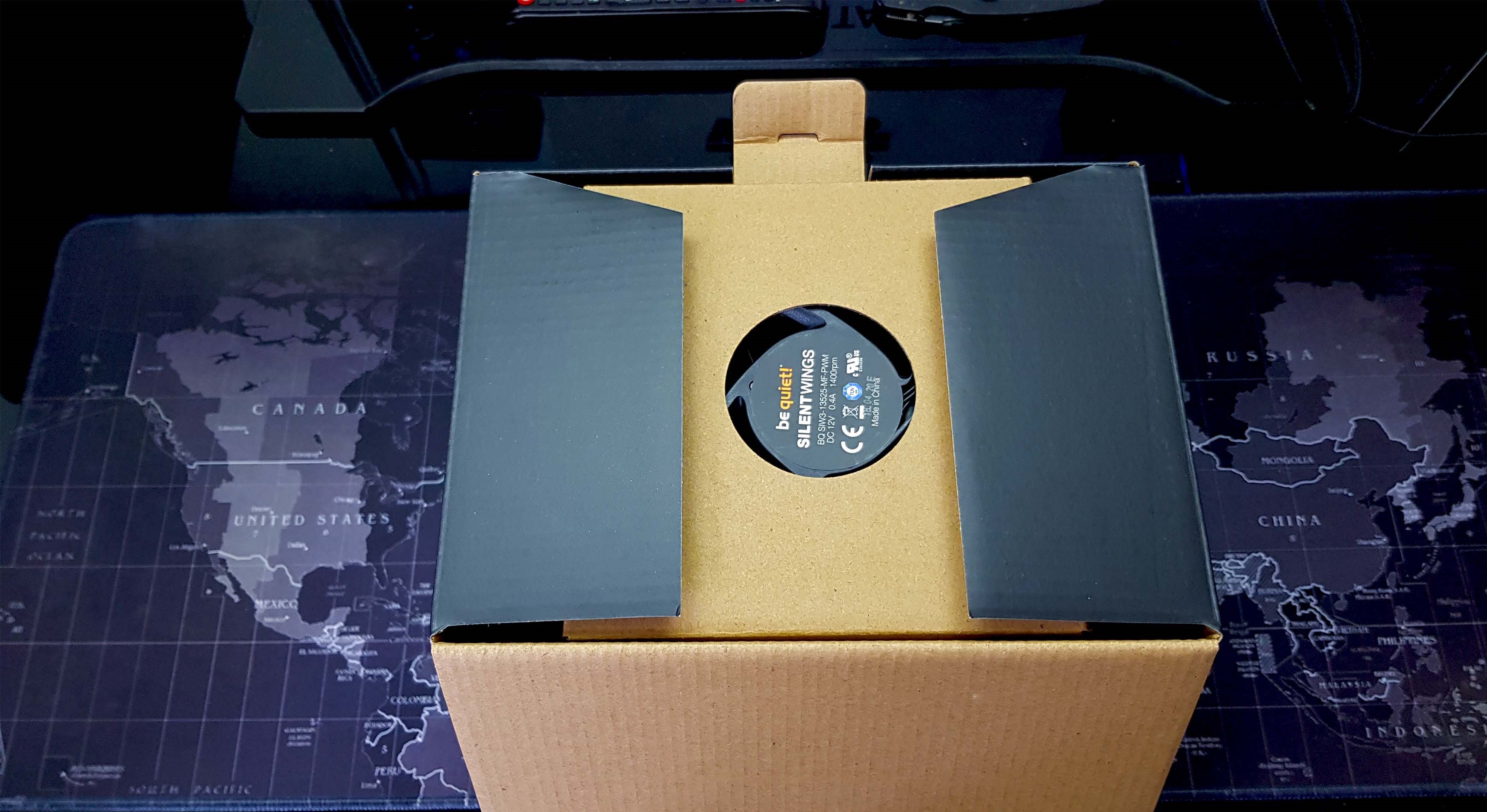 Underneath we have the heatsink which is perfectly nested and protected. On the side we see another box with the manuals in different languages and the accessories. 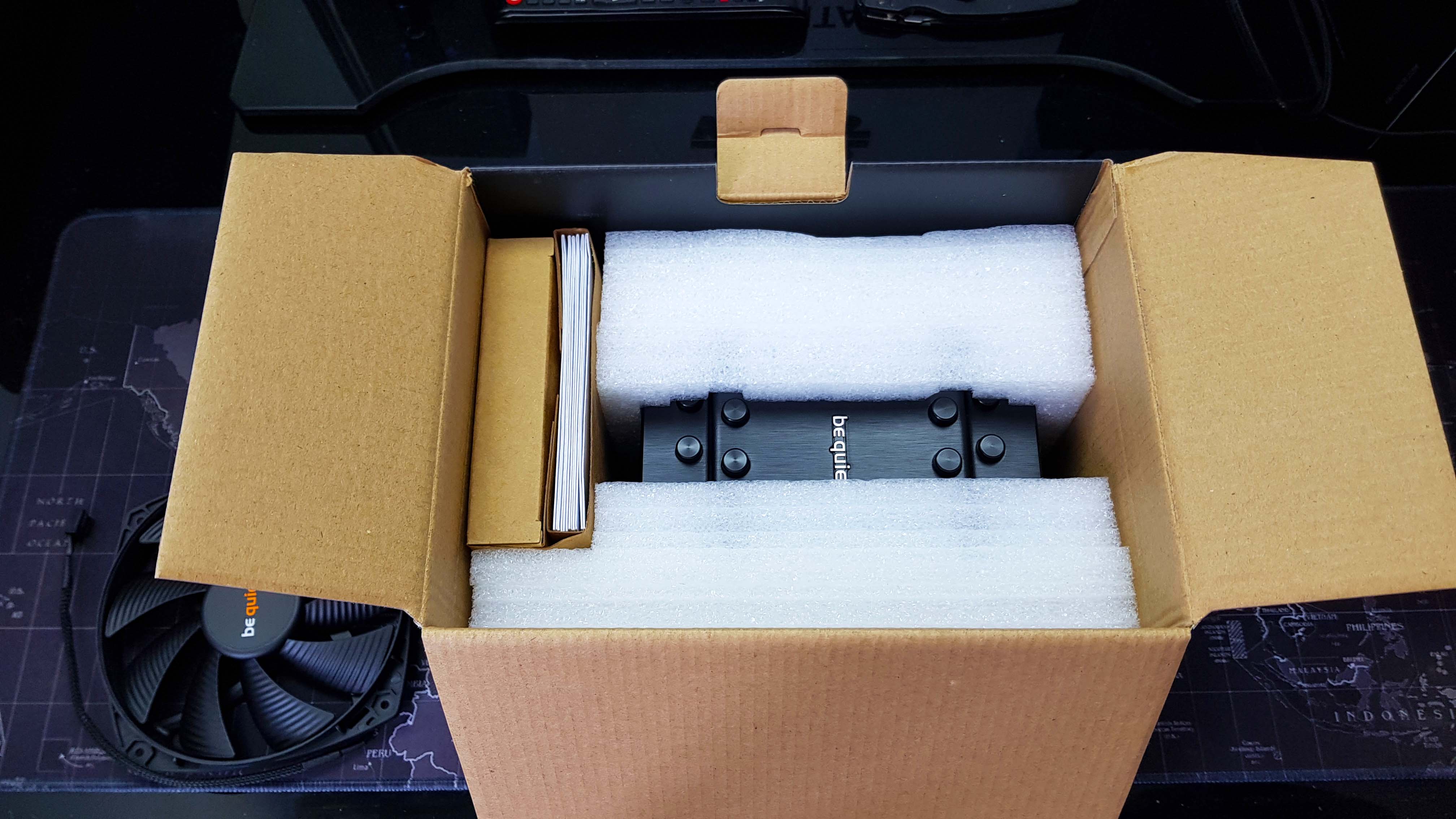 I Love it every I see company go out of their way to pursue details like this. They offer you an extra long screwdriver for seamless installation. Not only the fact they include this makes me giggle, but the fact that this is actually a high quality tool as well ! 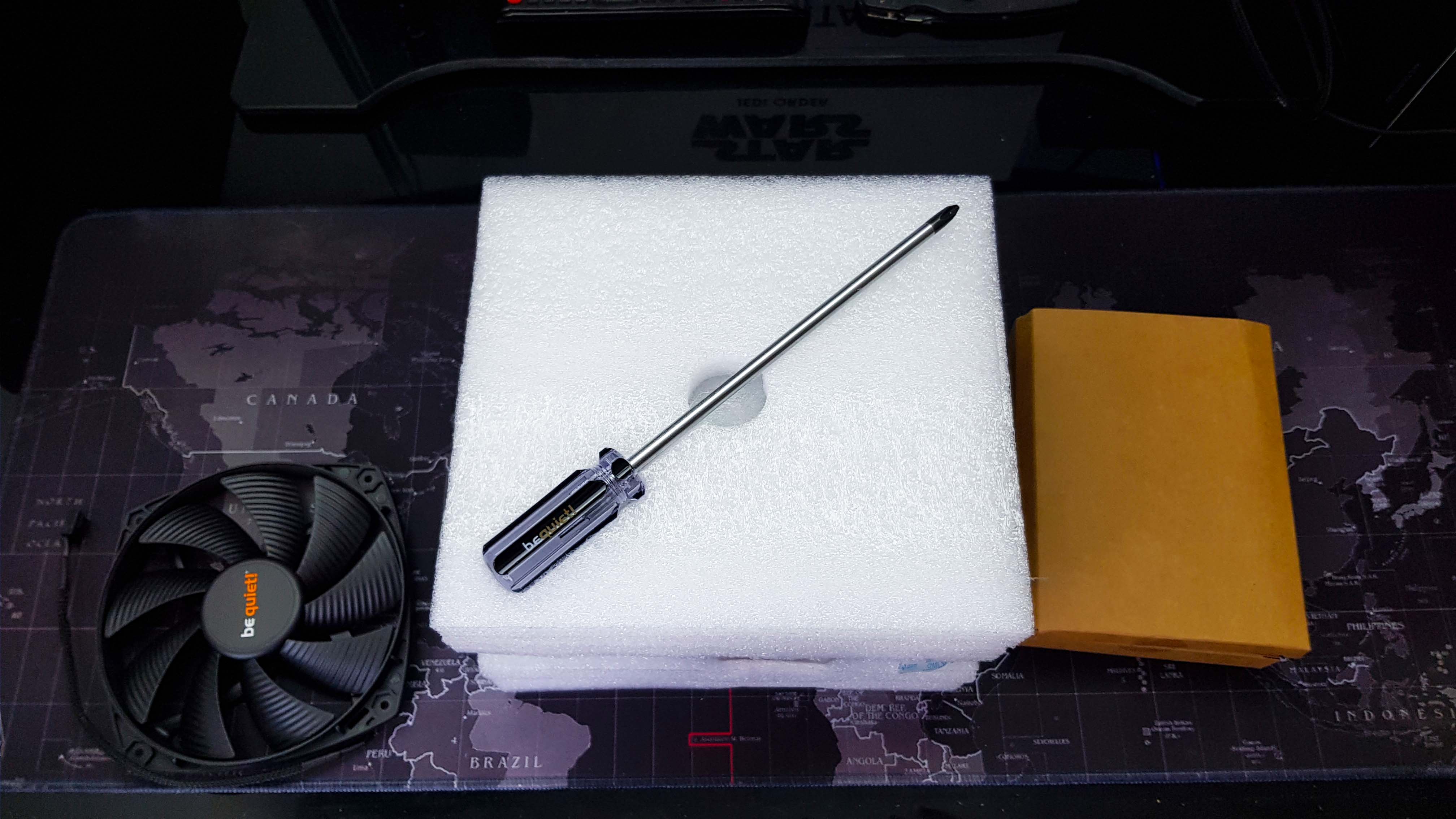 Cat’s out of the bag.

The Intel and AMD sockets have their own bags for easy identification with everything laid out and labelled.

you get the following:

The main subject is of course the Dark Rock 4 heatsink itself. This is a thing of beauty ! It sports an all black brushed aluminum top cover with diamond cut finish. Even the anti vibration rubber pads are pre-installed on which the fan will rest comfortably.

It is composed of 51 aluminium fins and 6 heat pipes which unite at the all copper base contact plate.

Then watch this, to off center the final package when the fan is installed, they moved the whole array of fins for better ram clearance.

The contact copper base doesn’t have a full mirror finish but that should’t prevent the cooler from not doing its job. Remember the 200 W TDP rating. You get one shot regarding the included thermal paste but that’s enough to get it going.

Use the included metal clips which are also blacked out for maximum OCD pleasure. You have two sets in case you decide to install another 120-135 mm fan on the other side as an exhaust.

Every detail matches so well this could easily be branded as a Batman gadget.

This is a breeze, as I am about to show you. If you use it on the AMD socket, things there are even more simplified.

We have an Intel base system so, let’s begin.

Step 3 – Before you install the side mounting brackets, make sure you have decided which orientation the heatsink should have. Facing the back.

Then screw in the spacers.

Step 4 – Apply the thermal paste and secure in the heatsink with the middle support bracket using the sexy long included screwdriver.

Step 5 – Final step is to attach the fan with the metal clips, not forgetting to plug the fan into the motherboard a well.

Now we did discover that with my RAM, a Crucial Tactical Tracer stick with a 40 mm heigh, with this motherboard, if we placed it in the first slot, it will make the fan sit on top of the RAM’s heatspreader.

This means that you have to lift the fan to clear the memory stick. Not a tragedy if your case can support those extra centimeters that stick out, like this.

Other than that, everything clears perfectly.

Right then, to the Batcave. I mean, testing bench.

The CPU will be tested in 2 main scenarios: at stock settings and then we will overclock it as high as we can. For both scenarios we used the Intel Burn Test utility, set at High stress settings, as the main torture test, for 10 minutes. Any results over 90° C in any condition are considered a fail.

The thermal paste used was the one that came with the included bundle of the Dark Rock 4.

We will compare the results of the Be Quiet! Dark Dark 4 with a 120 mm air cooler, then another Be Quiet! product, a 120mm AIO and finally a 280 mm AIO cooler. I will employ a synthetic test in Intel Burn Test to simulate a theoretical absolute load on the CPU which will dump the most heat and fully test any cooling system’s potential. 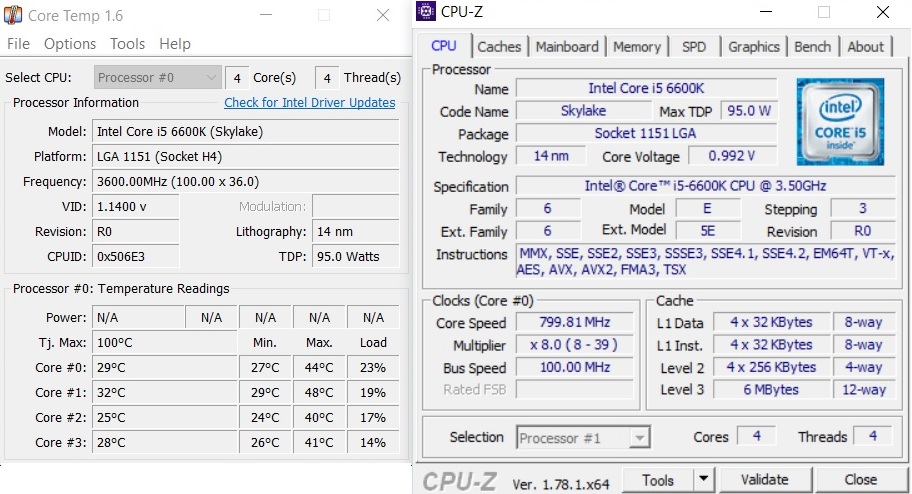 Unfortunately my CPU isn’t that lucky on the ‘genetic’ silicon lottery so it requires a lot of voltage to have 4.5 Ghz stable. But a great challenge for the Dark Rock 4 to see how it performs. 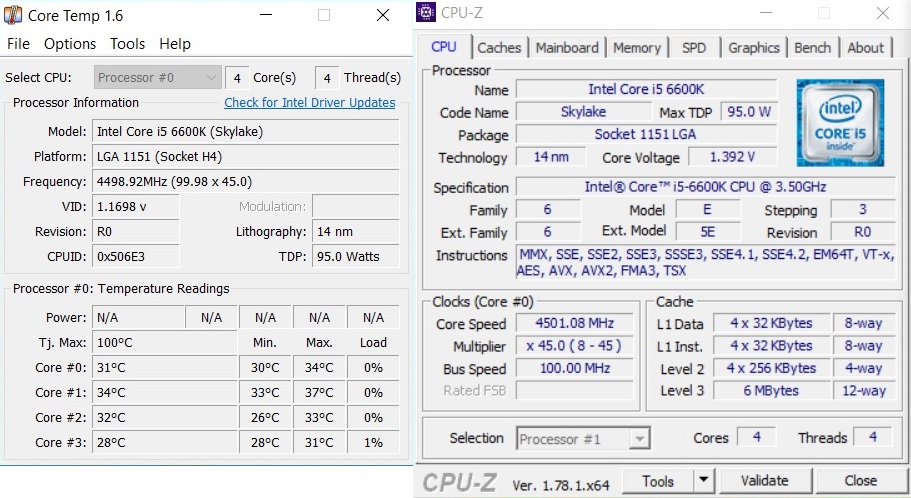 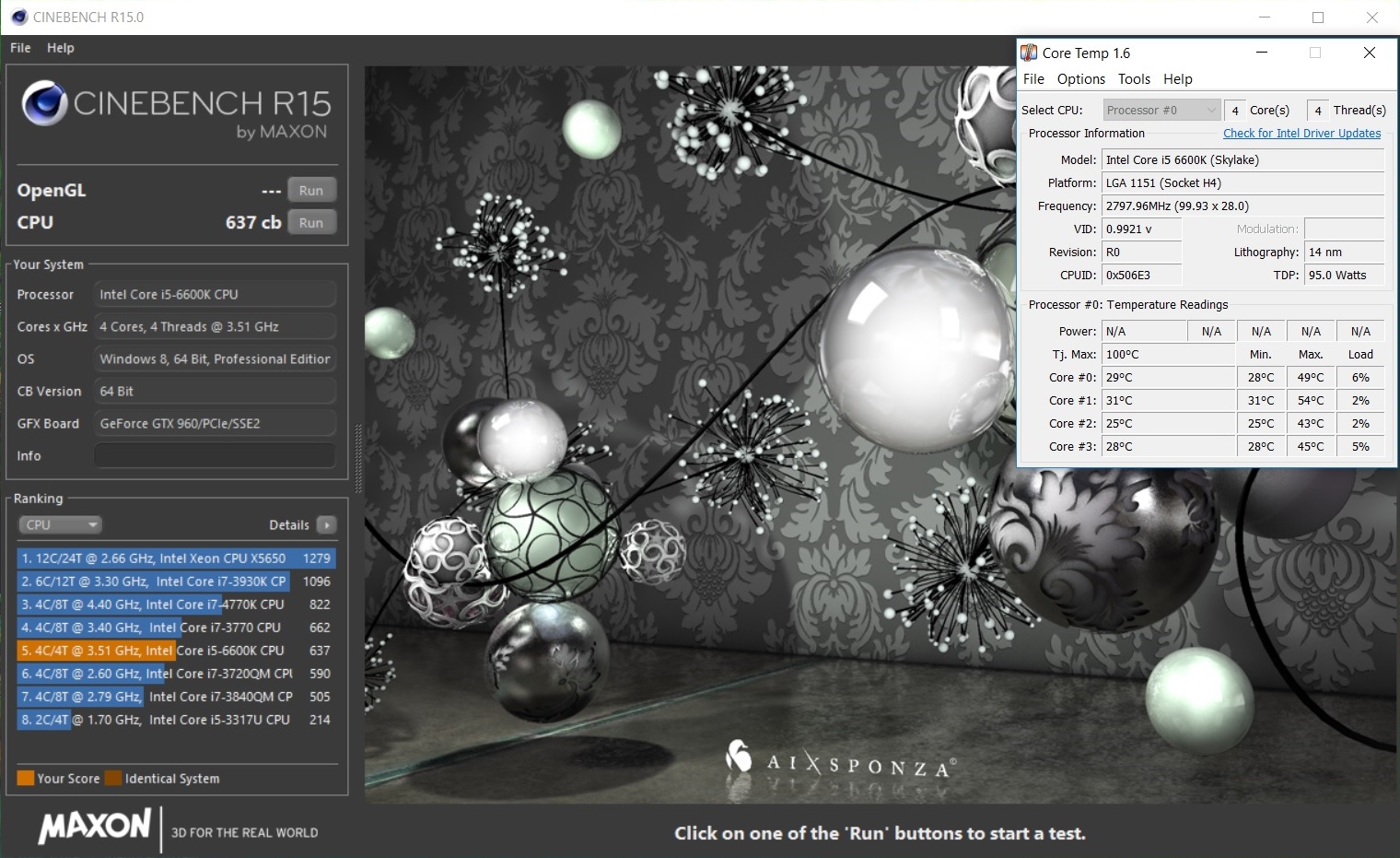 Same overclock value and the fan for the BE Quiet! Dark Rock 4 is always set with its auto fan curve via the motherboard’s settings. 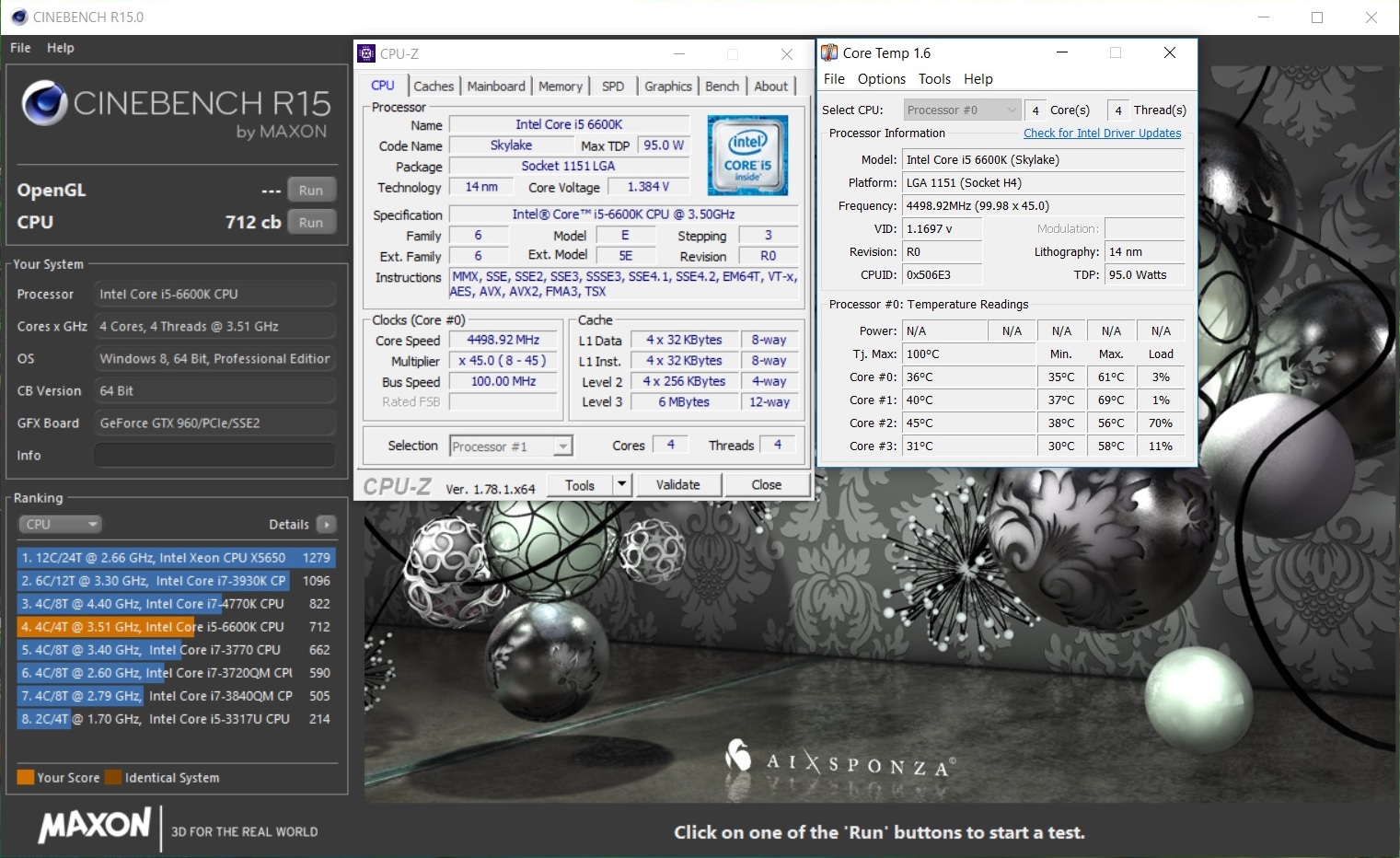 Next up we have Intel’s Extreme Tuning Utility built-in benchmark tool. Don’t worry, we will centralize all of our findings very soon. 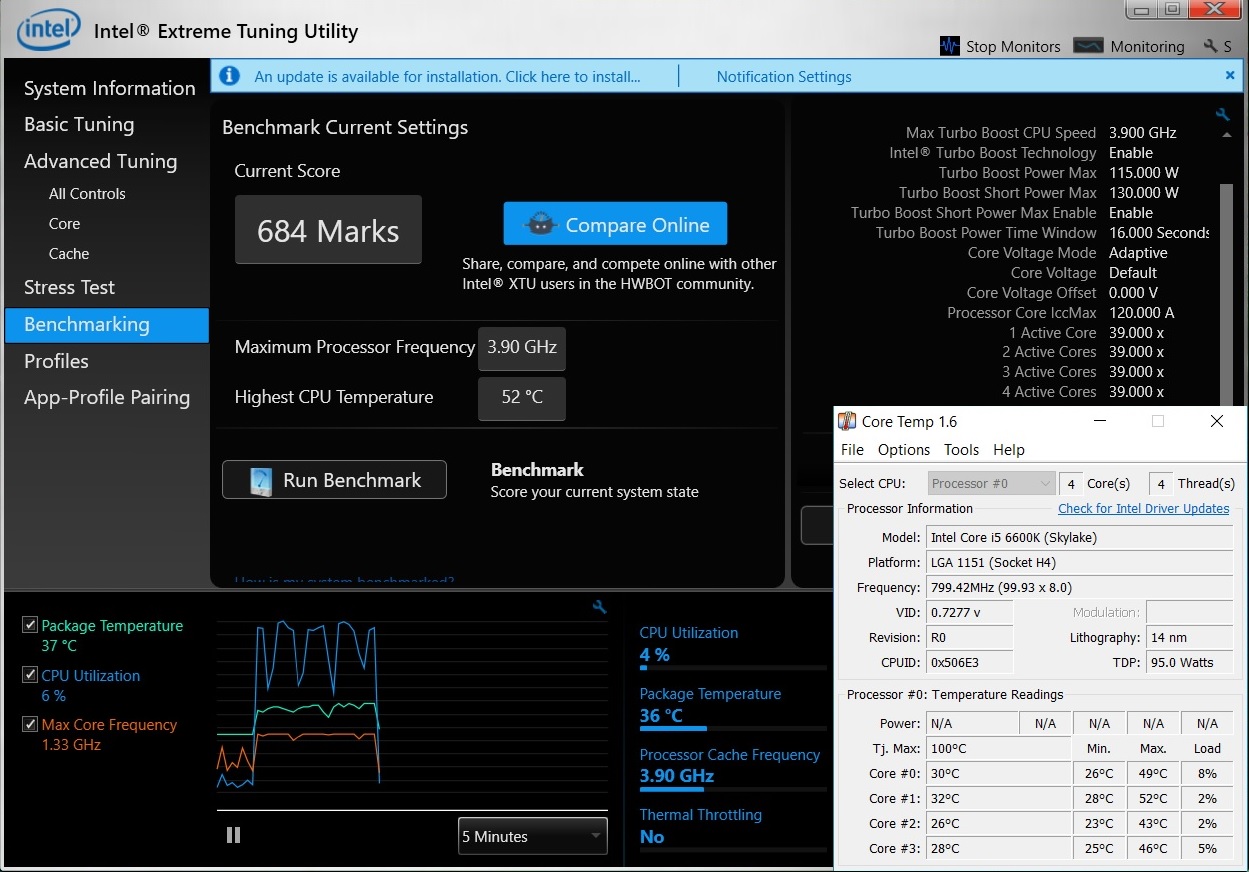 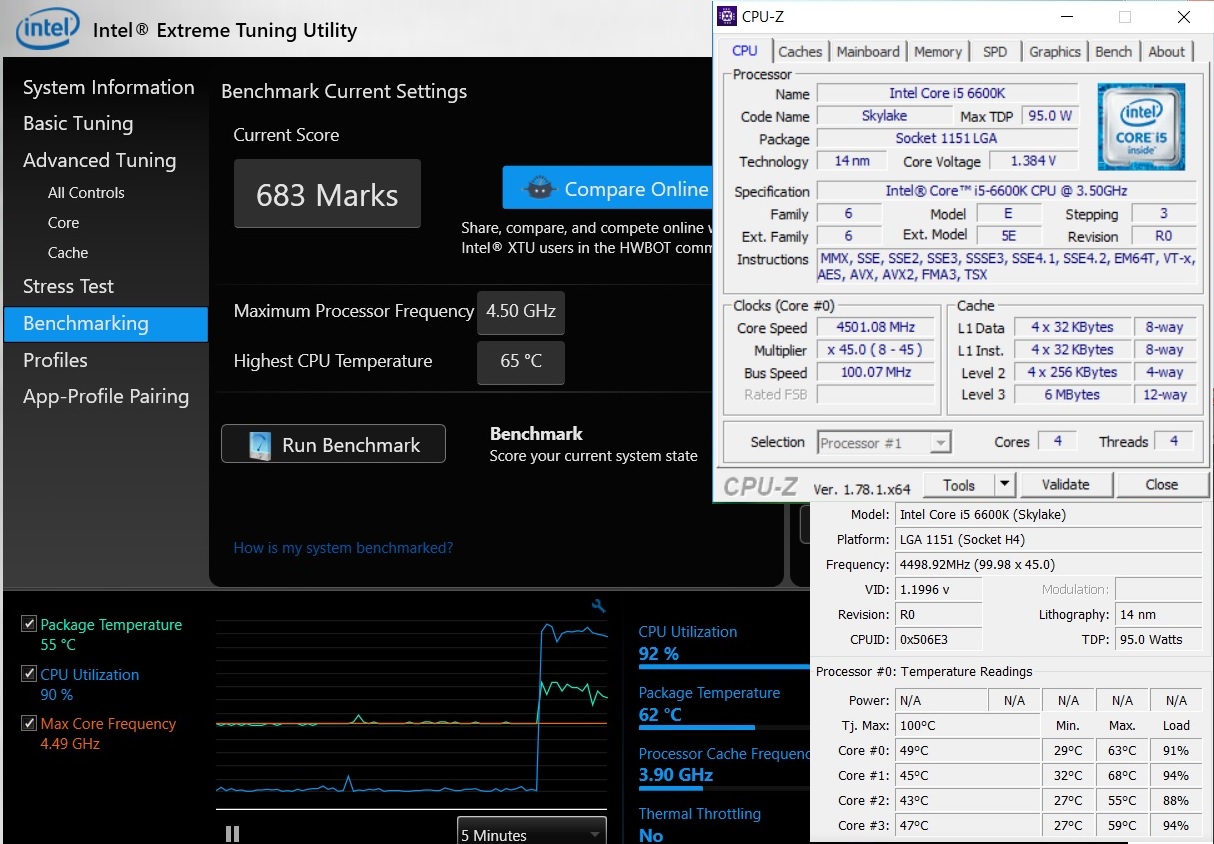 Were would we be without games in our lives? 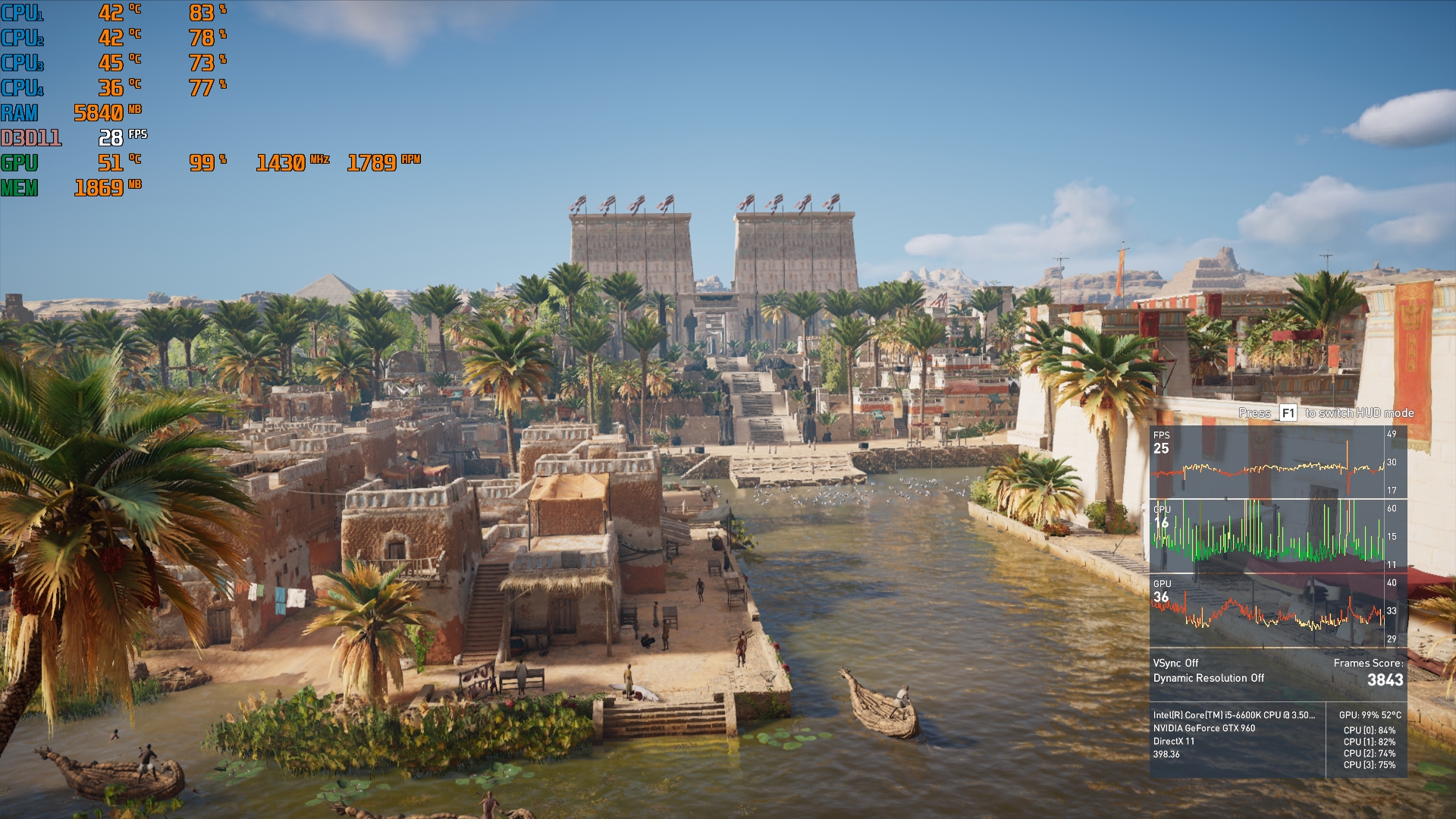 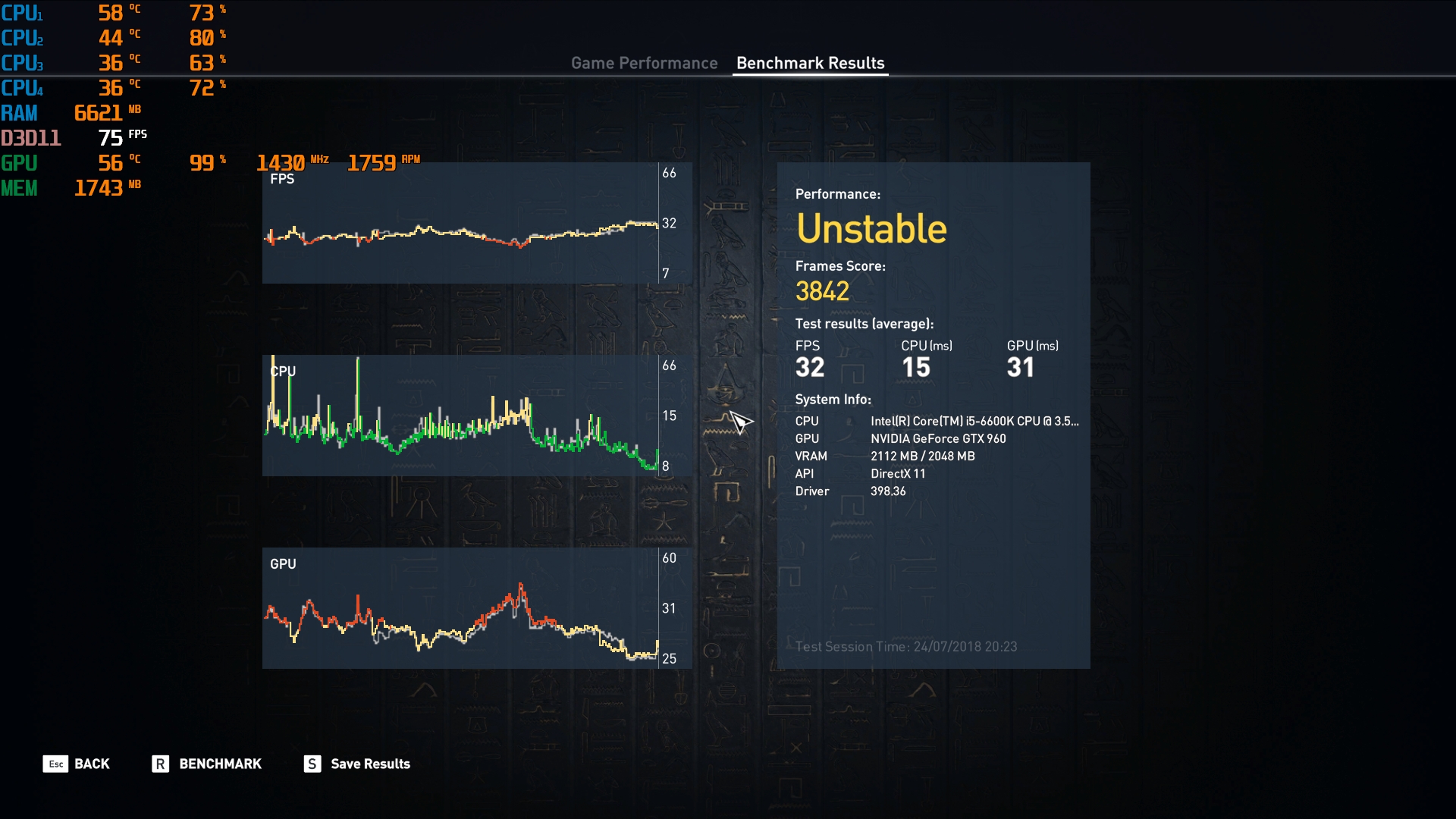 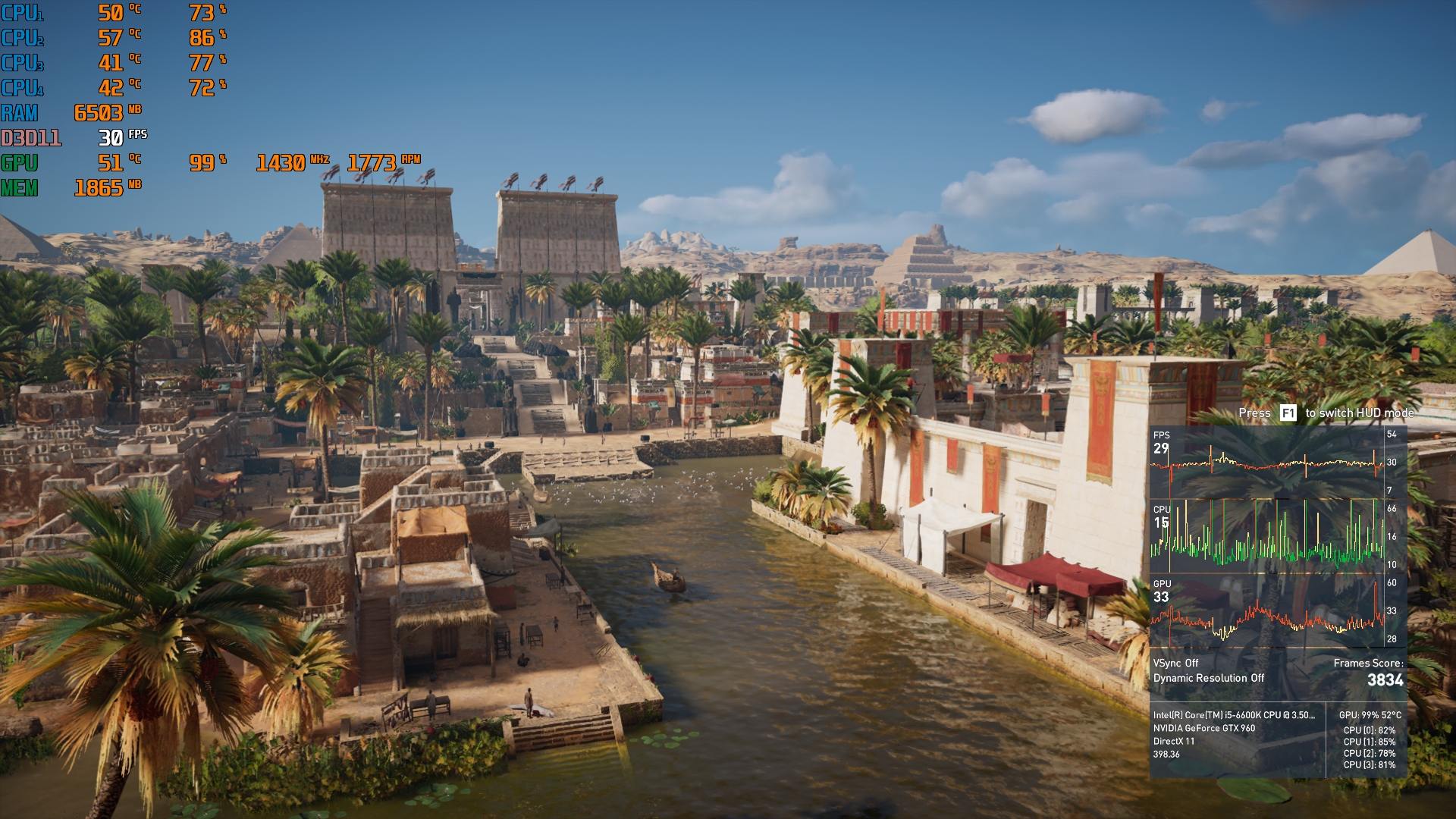 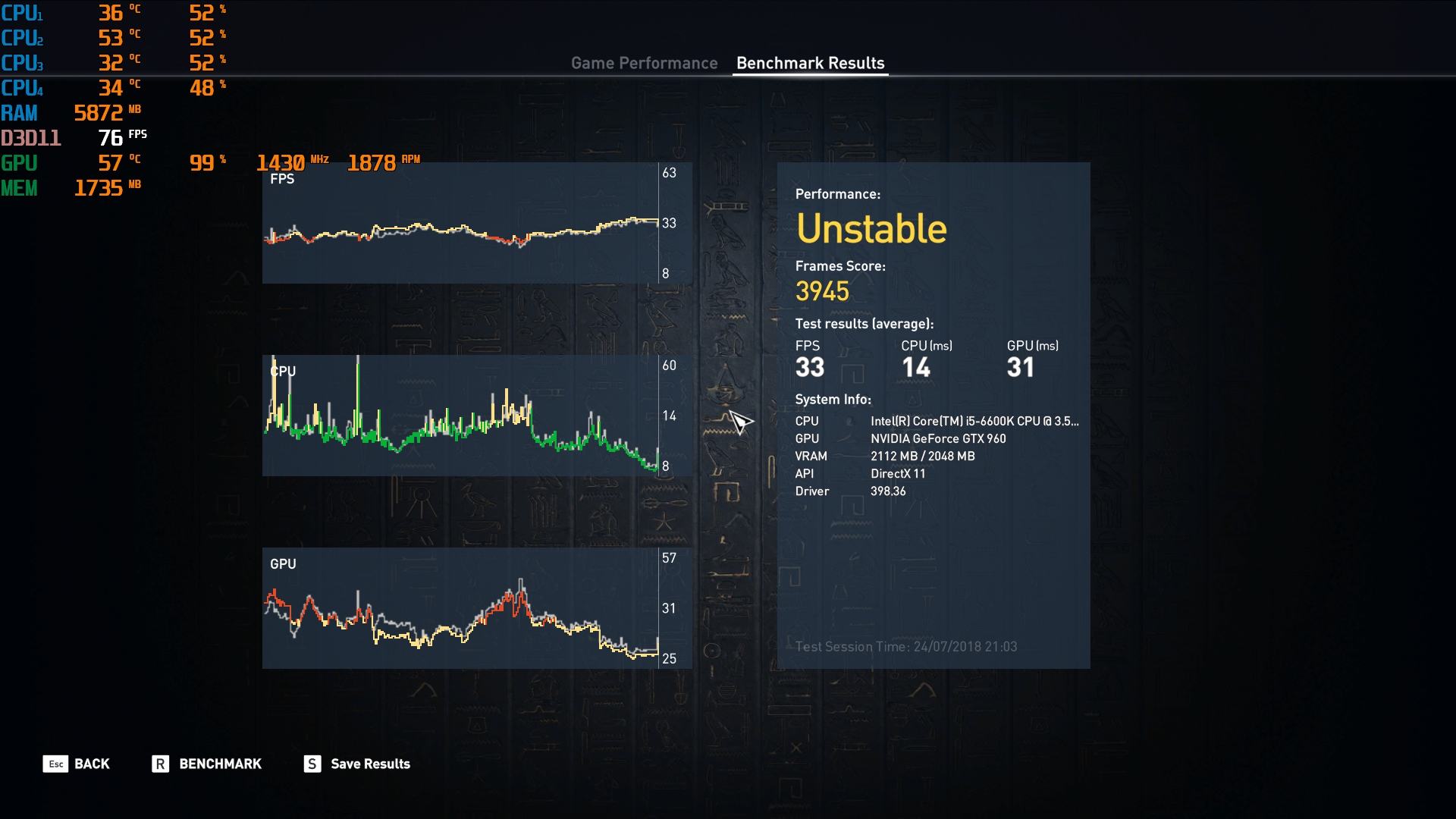 Time to interpret all of the data aka graphs time. We will record the average value per all 4 cores in each test.

It’s very interesting to see how close such different types of cooling solutions get. Again, this is all on auto RPM profiles because we are testing plug and play real life scenarios. The Dark Rock 4 does really well even in the overclock tests, with under 80 degrees Celsius in the Intel Burn Test which proves the capability of the cooler and its 200W TDP dissipation claimed value.

In the Origins game, the benchmark shows a general recommendation per the whole system specs. Because the video card is the weakest link for the “High” quality preset, hence the “Unstable” mark is given.

We are convinced with he cooling performance and now what remains is the noise output test. To refresh our memory, this was recorded only in the Intel Burn Test, with the case fans turned off and the GPU with the fan-less mode activated. Finally the front side panel (our side panel is tempered glass) was removed. The sound meter was placed at 30 cm away from the cooler. 25 decibels is the lowest limit our sound meter will go and we can consider room quiet ambient value. 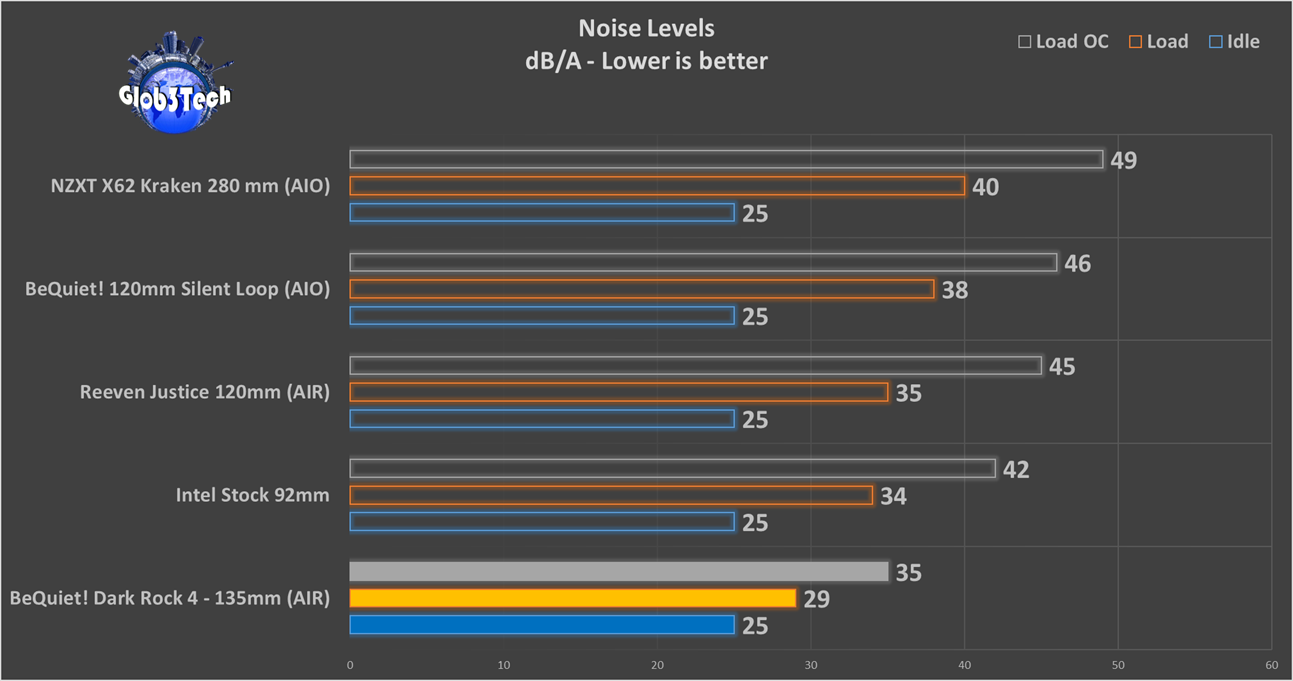 Yes, it is that quiet ! Incredible noise performance. No wonder this fan is quiet given its quality rotor and will last you apparently 300.000 hours, which translates to over 34 years of continuous use ! Which is beyond ridiculously good.

When a company chooses their brand name as “Be Quiet!” they better be sure they deliver on the noise performance front; and oh boy they do just that ! This single tower air cooler deserves it’s name as the Dark Rock because you can consider it as silent as a rock and built like one too. Major points go to the impressive build quality, attention to detail, overkill specs like the fan and the outstanding cooling to noise performance all make the Dark Rock 4 one of the best air coolers we have tested. Then get this, this is not even their best one, they have a dual tower monstrosity in their offer as well…

Many thanks to Be Quiet! for supplying us with this test sample !