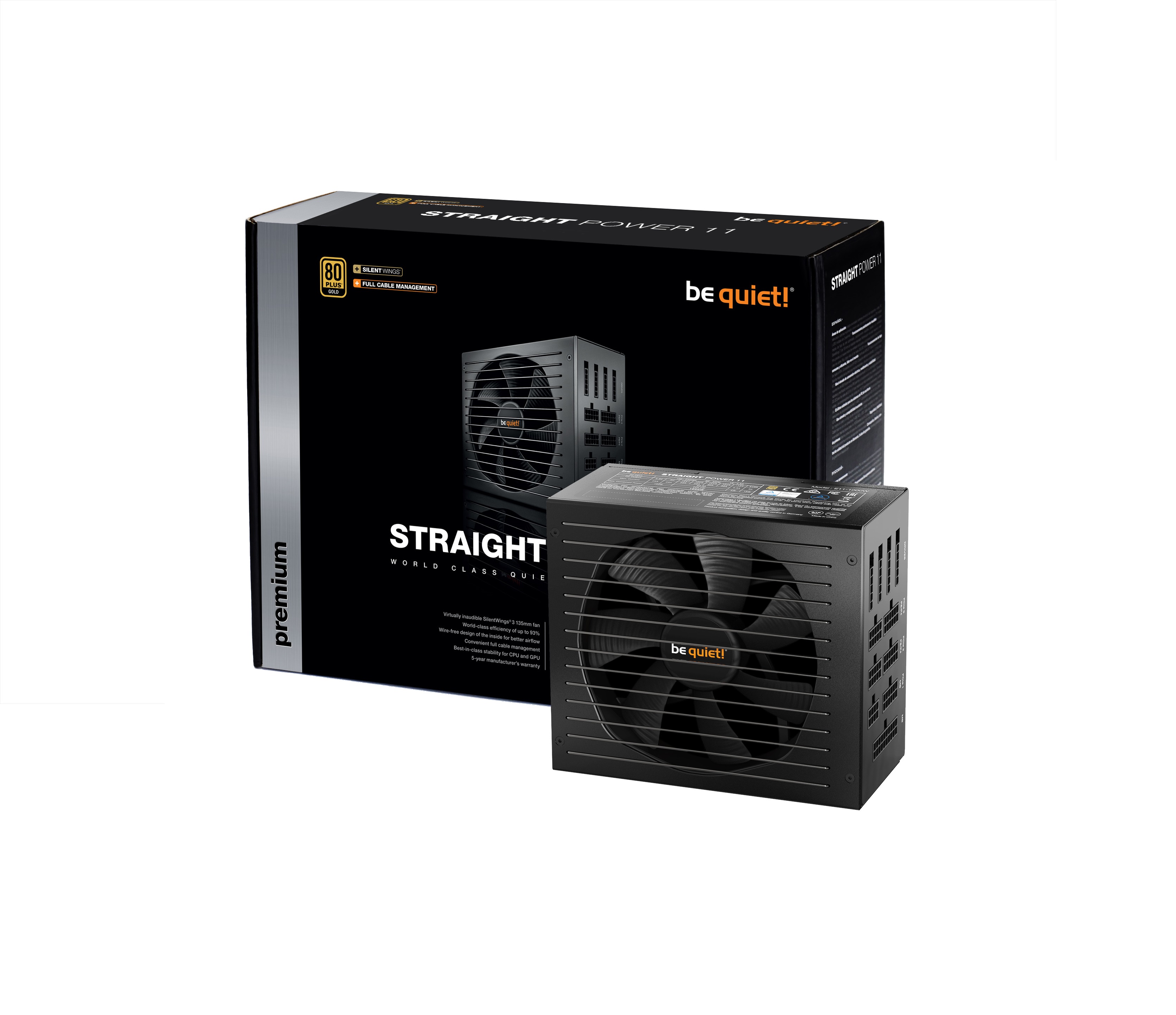 Power supplies have advanced a lot and in today’s market, even the most reputable companies that produce them, sometimes borrow the internal designs from others which in the end provide pretty good results. As per our title, this will be a “preview” since we don’t have access to a load tester anymore, which as you know, is a must for any complete PSU review. With that out of the way, let’s continue.

Straight Power 11 is Be Quiet!’s next generation of premium power supplies, an evolution of the 10 series. Right of the bat, this PSU has one very interesting feature – it has no wires on the inside! Why is that, do you ask? well, besides better overall efficiency, this helps with heat output. This effectively lowers the overall workload carried out by the fan and ultimately decreases noise output – the company is called “be quiet” after all.
First about BeQuiet!

BeQuiet! is a premium brand manufacturer of power supplies and cooling solutions for your desktop PC. With numerous awards under their belt and are considered the best German power supply manufacturer from Germany since 2006 – proved by being awarded with no less than nine times in a row with “Manufacturer of the Year” in the power supply category by the readers of the well-known German hardware magazine PC Games Hardware. In the category “fans”, be quiet! earned the first rank for five consecutive times and belongs to the Top 3 CPU cooler brands for more than three years in a row. The community of Hardwareluxx also voted be quiet! as “Manufacturer of the Year” in the PSU category for four consecutive years.

Below we have the prices in three different currencies.
The straight Power 11 family ranges from 450 W all the way to 1000 W.
We have in our hands the 850 W model.

As per the highlights we have:

As a quick buying guide – what to check on a power supply’s spec sheet; if you see at least 5 years warranty, full Japanese 105°C, at least Gold efficiency, and as bonus ,fully modular, you are cleared to proceed further. 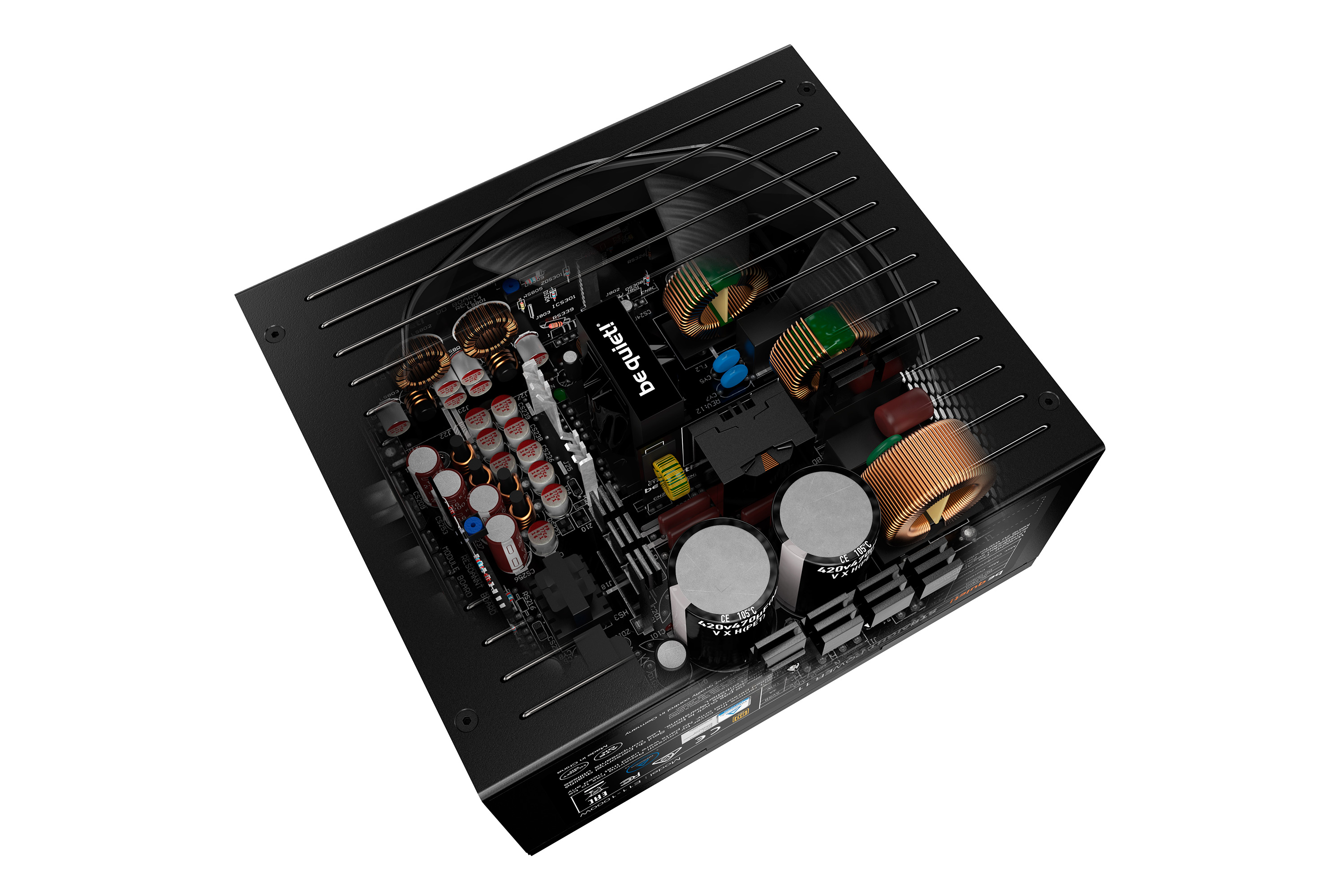 This PSU comes with a very OCD friendly feature – wireless internal construction on the DC side, which mentioned in the intro, is for better cooling airflow, less signal disturbance and enhanced longevity of components.

Nothing new here, the same design theme is maintained on all Be Quiet! products. A very professional and minimalist box presentation.

On the back we have a full cable breakdown with all the lengths as well. Then below that there is the full power distribution of the internal rails.

For a better view, have a look here. Cable length goes all the way to 70 cm. 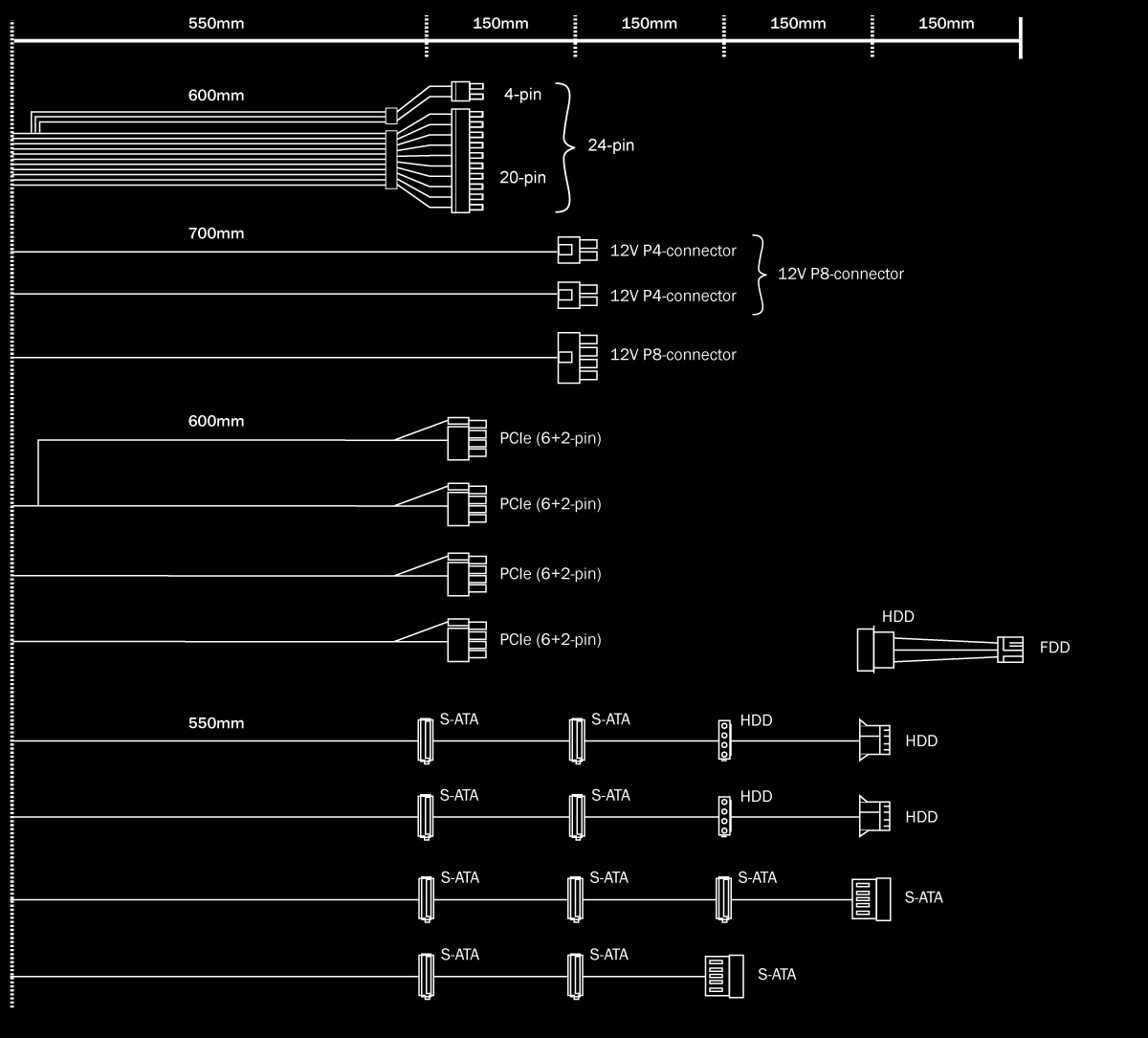 Most PSU’s have a single rail design. In this PSU we see a number of four 12v rails. This means you have to take a look into the manual for a good understanding of how you should distribute everything. A quick explanation and overview sounds like this: the 12V1 is for the mainboard and drives with accessories, the second rail (V2) is for the CPU and the last two (V3,V4) are for the GPUs, hence why they have a high Amps output.

Now let’s talk about efficiency. All power supplies built after 2004 carry an efficiency coefficient. It certifies products that have more than 80% energy efficiency at 20%, 50% and 100% of rated load. Thus such PSUs will waste 20% or less electric energy as heat at those specified load levels, which in turn will reduce electricity bills compared to less efficient PSUs. Not to mention that the fan will have a lower RPM so less noise output and so forth. To complete the perspective let’s have a look at this chart.

So the Be Quiet! 850W Straight Power 11 PSU has a 80 Gold+ efficiency rating which means its efficient up to 92% at 50% load at 230V power grid (ex Europe) and will not go below 88% on the other load points. Titanium is server grade which very few PSU for consumers can achieve. Thus Gold+ is the minimum you should aim for in today’s market especially when you plan to get a PSU this big because mathematically, PSU’s do their best efficiency at the half load point.

Inside, the PSU is centered for maximum protection with the accessories and cables surrounding it, in bubble wrap. 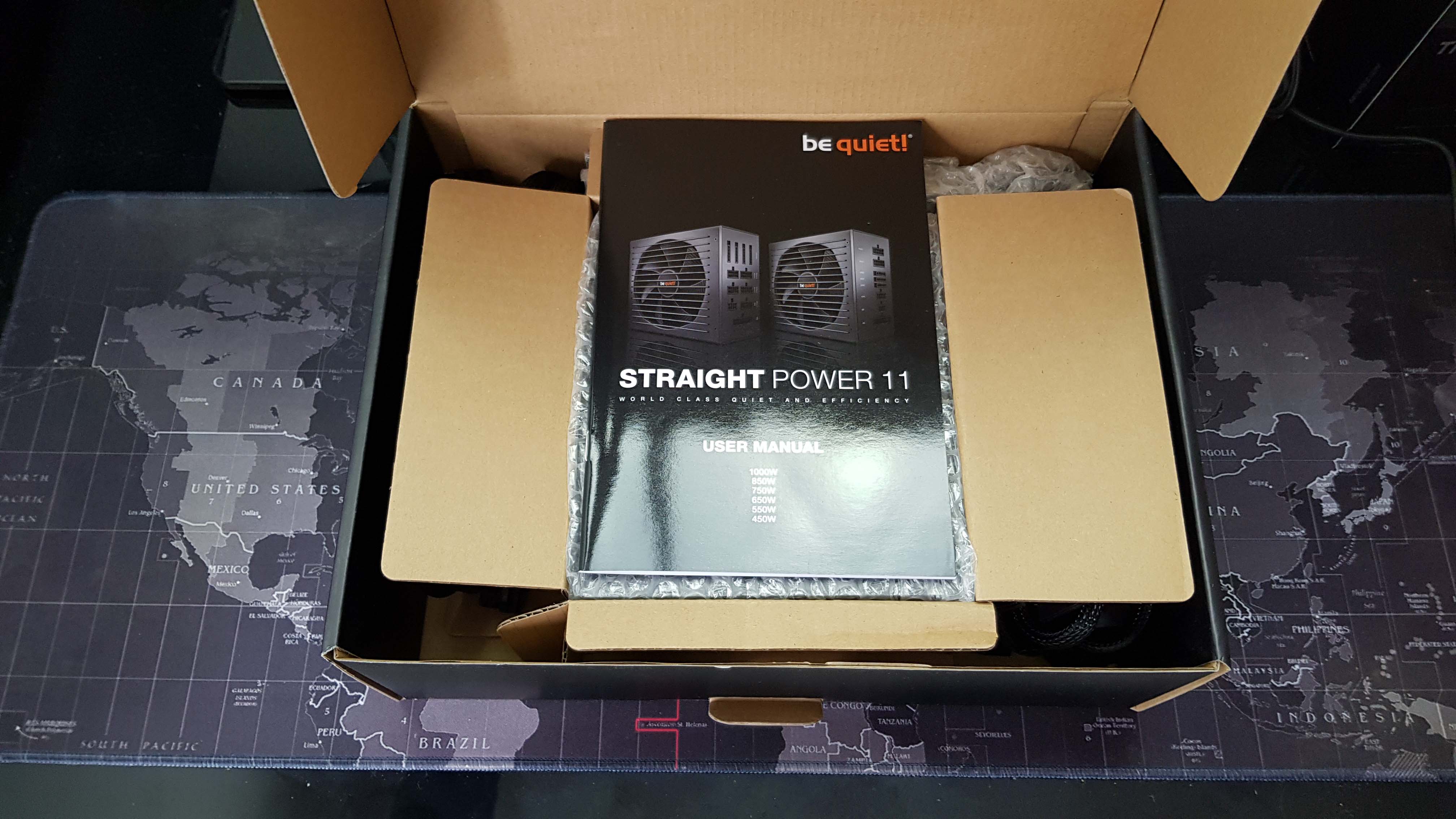 This is everything inside: one power cord, all the necessary modular cables (we saw the complete list earlier), the instruction manual, a bag with four mounting screws and four zip ties and of course the PSU itself.

The cables are easy to bend and being all black, helps to complete the professional look.

As the previous products we tested from Be Quiet!, this PSU is the same – clean and quality design, solid build construction and rocks the sexy black look.

This is the 135mm SilentWings 3 fan. Even though this is not semi-passive, Be Quiet! reckons it will operate virtually silently most of the time anyway. The fan is protected by this slimline grill so you can admire the internals.

To back this up, the rotor for the fan has again the epic fluid dynamic bearing and six-pole motor which will give you a lot of endurance. Be Quiet! also provides a chart for the fan noise output. 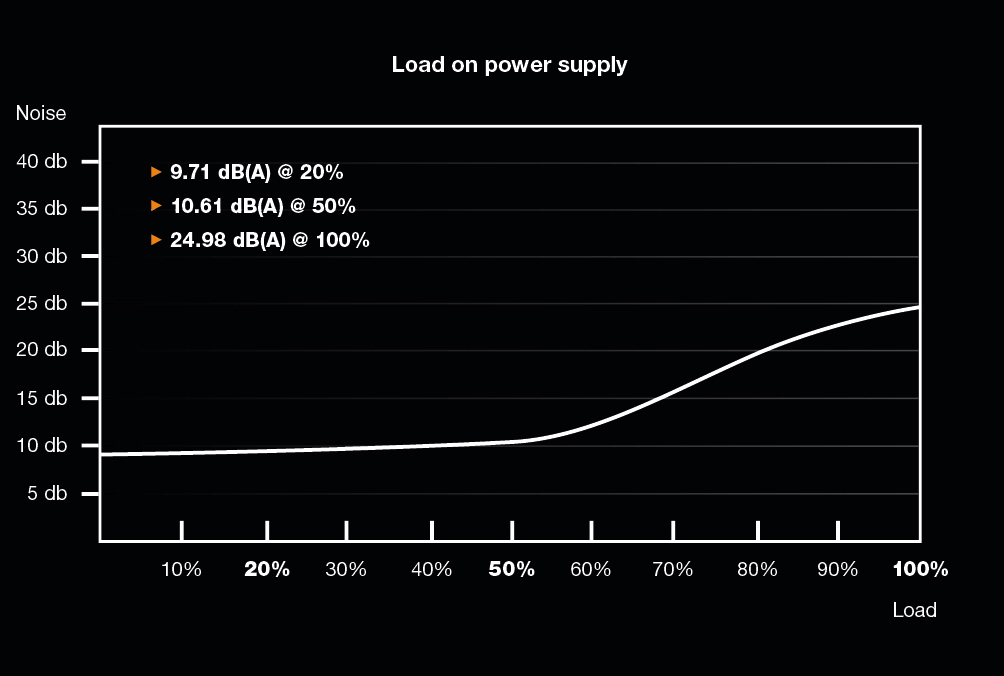 This side has the rails sticker, which we have already mentioned, alongside the information it provides. Notice the 80 Gold+ rating sticker on the upper right side.

On the other side we have minimalist engraved branding carrying the company’s name. The PSU is 170 mm long which a medium size and should fit most (m)ATX or even some mITX cases.

Now here is where you install the desired cables as per your needs. Modular PSUs are a must for any PC build with a desired “clean” wire management. Every port is easy to identify.

Flip it once more and we see the exhaust grill, the power plug port and the ON/OFF button.

To install any PSU is fairly simple, just screw it into place.

Being modular, don’t forget to install which cables you need first since later on it will be a bit challenging to access the ports.

Then you have to fight your way around the spaghetti junction aka – wire management. But again, modular PSU’s are really easy to route especially if you have a case with cable management pre-installed or pre-considered. Also the cables are long and flexible enough on the Straight Power 11 850 W to reach anywhere and following any route you need. Because the back might look like this for a while until your OCD wins;

But in the front, the end result will be glorious !

Without a proper load testing PSU machine, we cannot call this a full review like we mentioned in the beginning. However that doesn’t stop us from trying to stress test as best we can, trying to squeeze as much wattage from the PSU to see if it will bulge. The only way to do that is to put as many video cards we can in a multi GPU setup. Then OC the CPU and the GPUs.

Then we will measure the total wattage from the wall via our Wattage Monitor and then record the load on the fan on the PSU. Or at least try. You will see in a second why.

The most power hungry cards we have are two NVIDIA 9800GX2 dual “sandwich” GPU old school monsters. Despite having “only” a TDP of 197W, they are known to draw more than that even in stock. We overclocked them with +120 Mhz on the cores, +380 Mhz on the memory. That will make sure we draw as much power as we can. I have to mention that these video cards are very old and might die in during these tests so, for my own safety, I put a house fan as close to the video cards as possible to keep them from shutting down due to high temperatures, which we will soon witness.

The CPU was overclocked to 4.5 GHz with a stable voltage of 1.280v. Stock and OC values were tested.

To fully stress the system we will employ a CPU stress tool combined with a GPU stress tool to basically make the PC consume as much power as possible. This will be fun.

I will cut to the chase. I only manged to test a few seconds since my fuse box kept tripping after a certain point. No joke.

With everything stock in the stress tests (Furmark + Prime95 at the same time) we got at the plug:

Say what? The Math doesn’t add up per the recommend TDP. Beats me. Ok so the Be Quiet! PSU provided more juice over its capacity. Most quality PSU’s can do that for short periods of time.

But wait, you haven’t seen anything yet.

Now with OC on the CPU and the GPUs. With all the cooling in the case plus the house fan blowing directly at the GPUs, the lowest value I saw was 96 degrees C on one of the GPUs and the highest was at 103 degrees C ! The cutoff point is 105 for these video cards.

Even saw 1100 W for moment before the fuse tripped. After that I stopped testing. Nothing lost, all was good, fuses are cheap to replace. But man, what a rush.

So either my wattage meter is confused.com or I created an absolute power monster with this old school tech. If all my recordings are truly accurate, than the Be Quiet! PSU overdelivered which is always a good sign. Who needs a load machine when you can do this?!

I Couldn’t do any noise tests for the PSU itself in this configuration because there was no way to measure it accurately when the video cards were at full chat and sounded like a jet engine. I put a “normal” video card – an EVGA GTX 960 SSC with the fanless mode activated – then I started a game and measured the PSU’s noise output. But there wasn’t any noise to measure. The PSU is dead silent. Even after that torture and I feeling the warm air blowing out, it was still silent. Well, I think we can wrap things up.

We have come a long way in the graphics card area regarding consumption, optimization etc. Hence even if you SLI two of the most powerful single GPUs you can find today, 850W is still plenty of juice for them. Be Quiet! also does one tier higher at 1000W if you really want to do crazy experiments like I just did. But for any regular standard gaming machine, 850W is plenty and a PSU like this will last you many builds.

The Be Quiet! 850W PSU over-delivered today in my wacky test and truly is a dead silent machine.

The Be Quiet! 850W Straight Power 11 power supply is a great product because it ticks a lot of boxes from looks, power delivery, noise output, build quality, its modular design, decent warranty and its ability to over-deliver if needed. A PSU is your safety net for the whole PC and thus you need something that you can trust with the life of all of your components. That trust and peace of mind demands a price but I believe that this PSU deserves its asking value. Did I mention its is dead silent?

+ Epic build quality
+ Unique with its wire-free construction
+ Despite the fan operating continuously, its one of the most silent PSU’s around
+ Minimalist design
+ Fully modular
+ Long, flexible and fully sleeved cables
+ 5 Years warranty

– The Price – mainly because there is a lot of competition at these specs and efficiency rating, but I doubt many PSU’s can do what this one did today in these tests

Many thanks to Be Quiet! for supplying us with these test sample !