When SSDs (solid state drives) first came out, as per any new tech, they were expensive because they finally promised us the revolution we were expecting for a while – to remove the last ‘dinosaur’ bottleneck from our systems – we are talking about HDD (hard drives) of course. Why? Because they use moving parts and thus have physical limits. While SSDs were completely ‘digital’, HDDs remained cheaper and offered far greater storage options. Well, with time, the solid state technology caught up and now were are almost at the point of seeing the retirement of the HDDs.

Today’s roundup will try to show just that – that SSDs have gotten to a very attractive price/performance/capacity threshold to make you forget all about the ol’ spinning buzzing machines.

With help from Crucial, Western Digital, Kingston, ADATA and SanDisk – we will have a look at their most affordable storage solutions.

All of these drives, which are all available in different storage sizes, can be purchased on Amazon.

Kingston is currently one of the best sellers/choices on Amazon in the budget segment. They do offer the same capacities as Crucial’s BX500 but have one more flavor at 960 GB. From them we have the 480 GB model so we can have a direct comparison with the BX500.

Western Digital is next which only has two versions available as per the date of writing, in their ‘Green’ lineup – 120 and 240 GB. We have the first storage option.

ADATA has the biggest range here with five models, from 60 GB all the way to 960 GB. However I couldn’t find it in stock anywhere. Thus we have the 120 GB model.

Finally, SanDisk brings to the table four models as well and again we have the 120 GB variant.

Since price is the name of the game here, it was mandatory for us to have a complete picture of the cost per GB offered by all and how much variety each manufacturer is offering in their budget lineup. With these out of the way, let’s proceed.

Let’s have a quick look at what the main highlights are from each vendor. 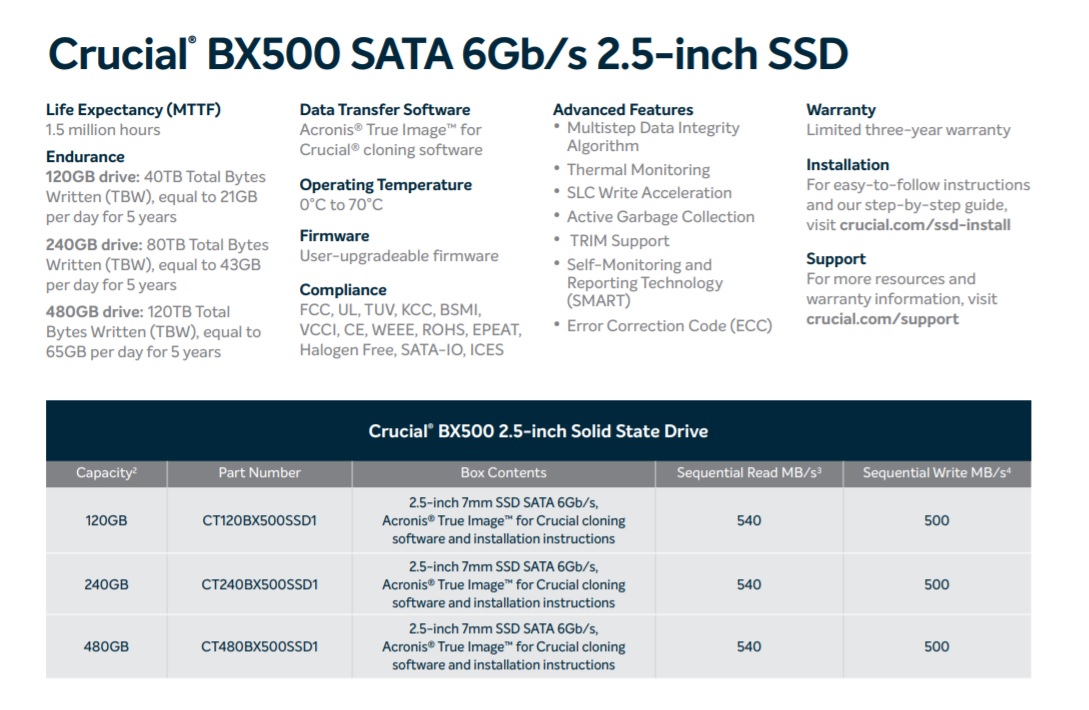 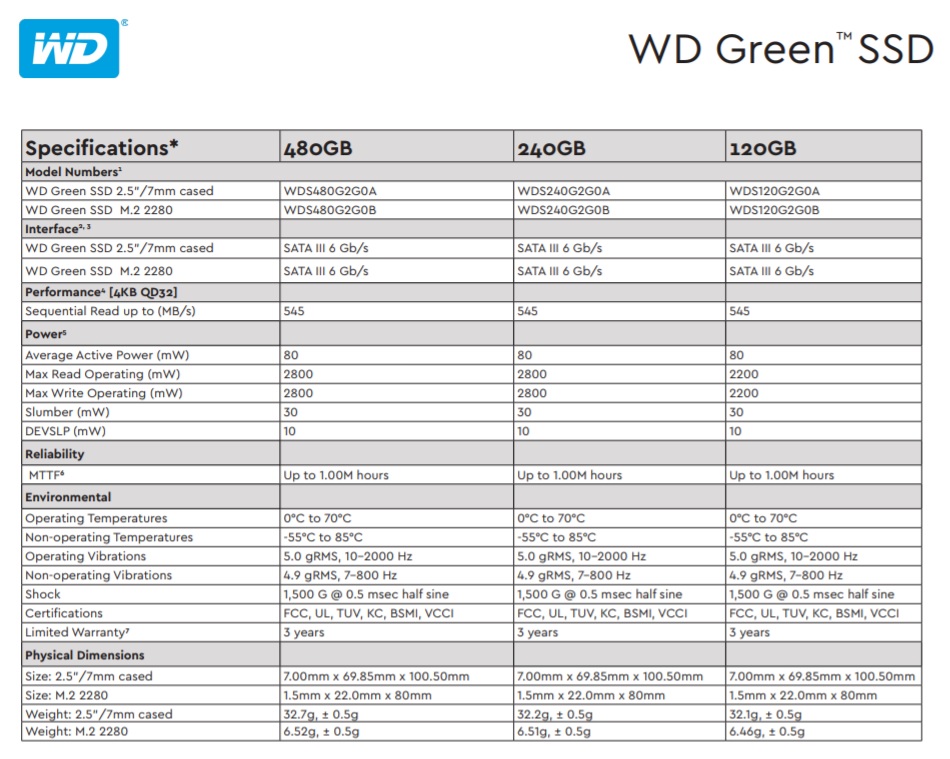 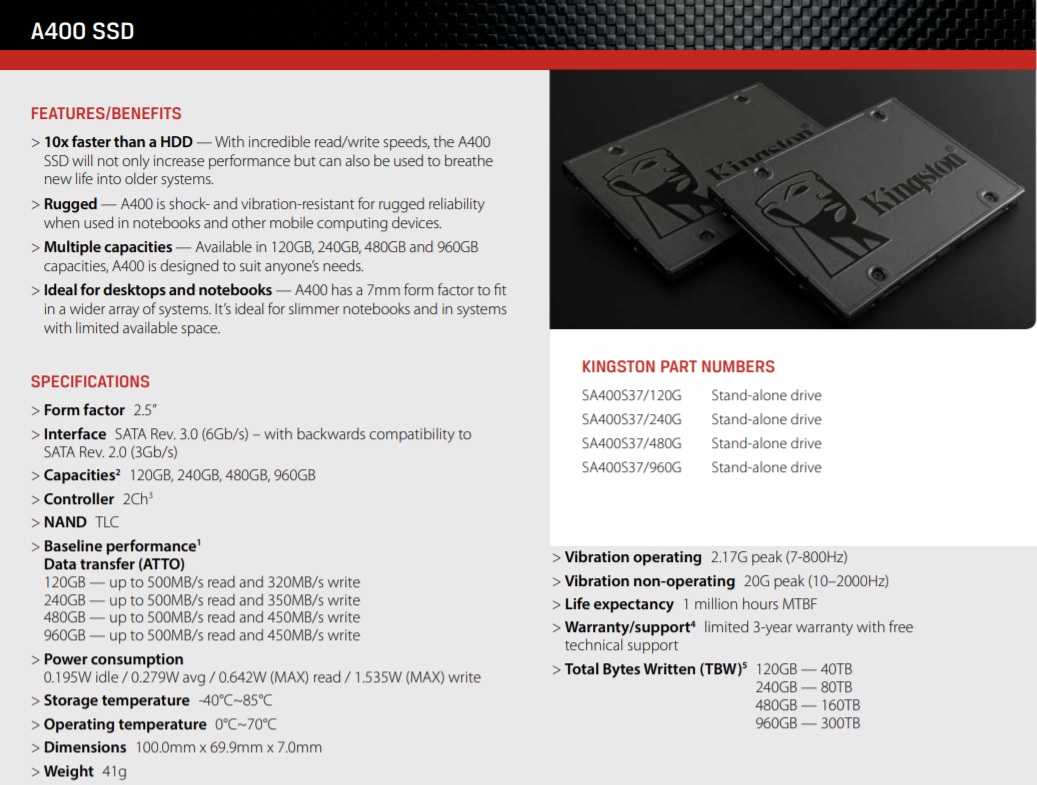 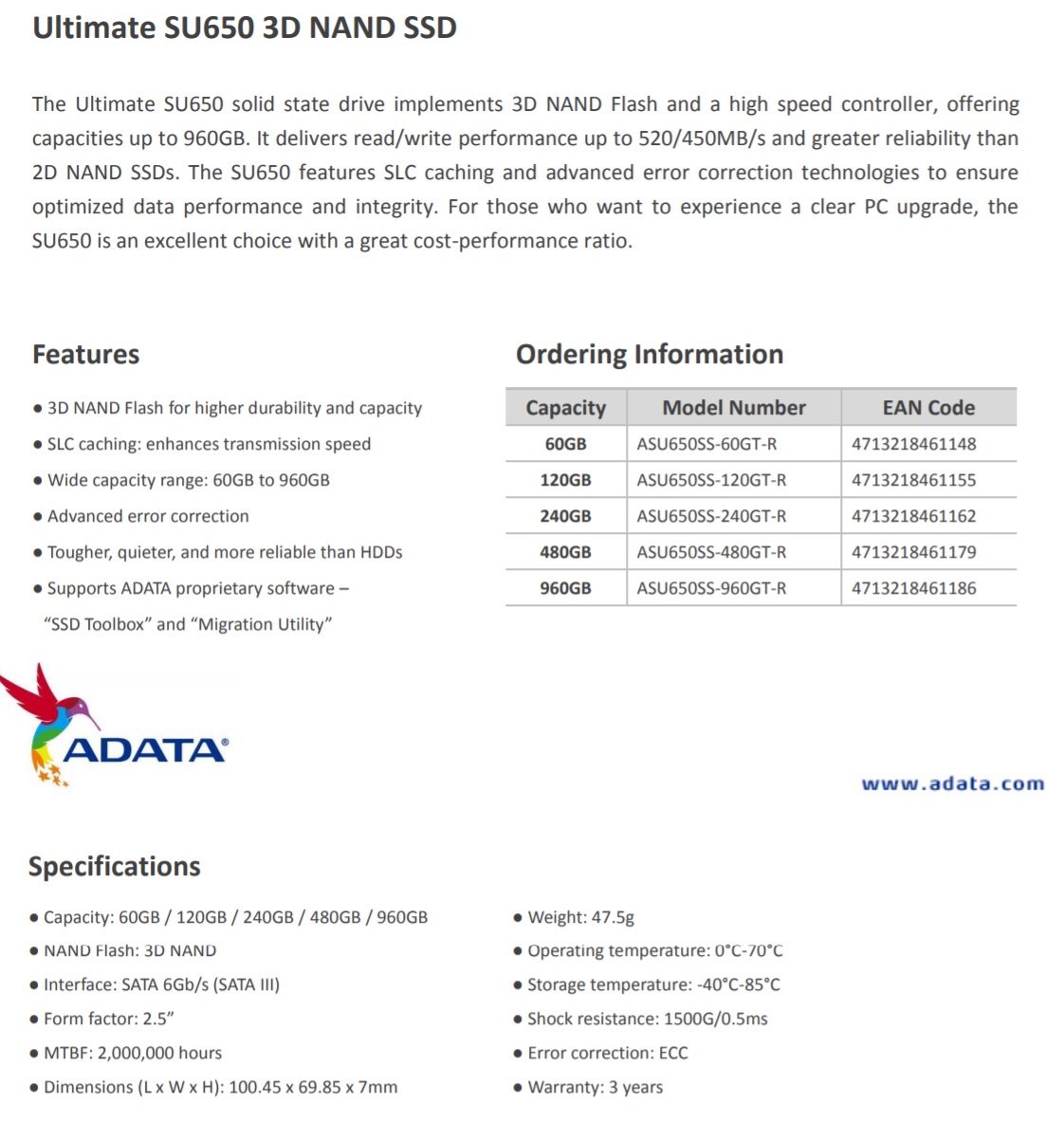 We know the prices and capacities straight away, now another key piece of information to acknowledge is that all of these are built on the TLC (Triple-layer-cell) V-NAND. Thus as per all TLC SSDs, they usually incorporate a SLC cache buffer which boosts burst performance for general usage. This is present on all of the drives today as well, as per the data product sheets – the only exception appears to be Kingston.

Then all of them carry a 3 year warranty and only Crucial and Kingston offer the endurance ratings. (TBW)

Since these are budget products, you should expect the bare minimum when it comes to accessories. Only ADATA offers a laptop spacer adapter, the rest barely even carry a manual. All of them offer access on their website to cloning software.

All brands are easy to identify one from another.

To reduce costs to the minimum all of them use plastic for the outer shell while Kingston is the exception; which still uses metal with a very tactile feeling finish.

The branding continues on the front of the SSDs, again easy to identify which is which. Kingston has their face logo etched onto it, Crucial this time has engraved in the casing the ‘BX’ letters, while the others use stickers.

On the back, we have another round of stickers which contain more information regarding specs and product codes. All of them are 7mm thick thus slim laptop compatible as well.

The focus will be on the budget value drives while the Samsung 840 Pro 128 GB will be used as a baseline item to see how much TLC has advanced from a two generation old MLC from Samsung.

Here are all the drives active. 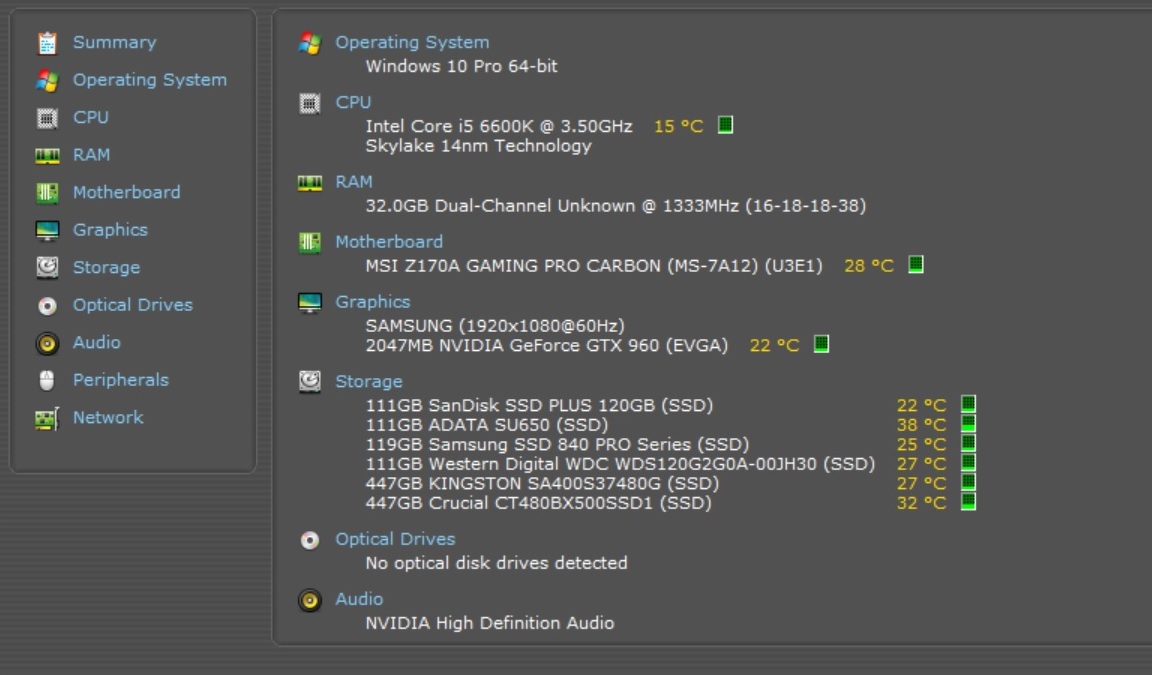 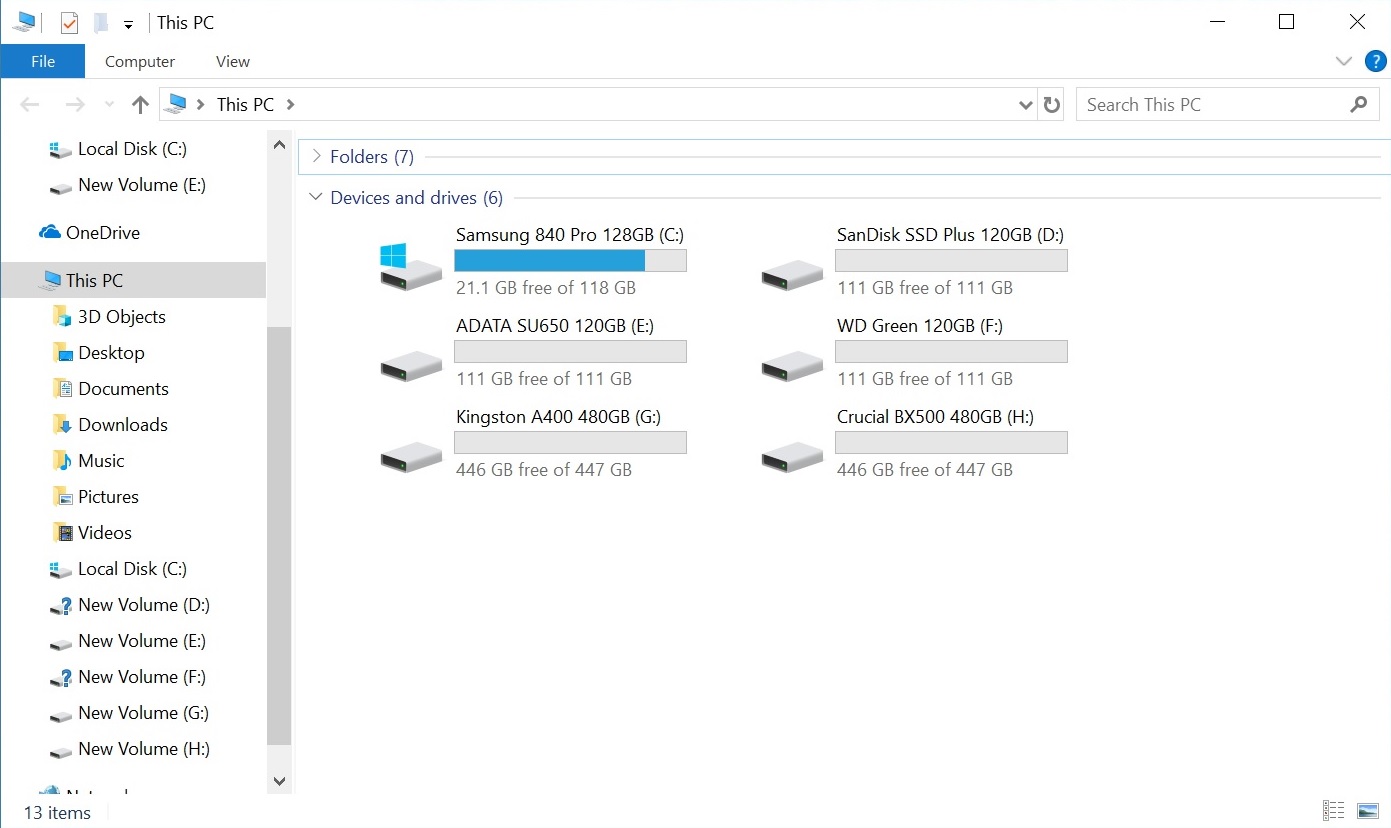 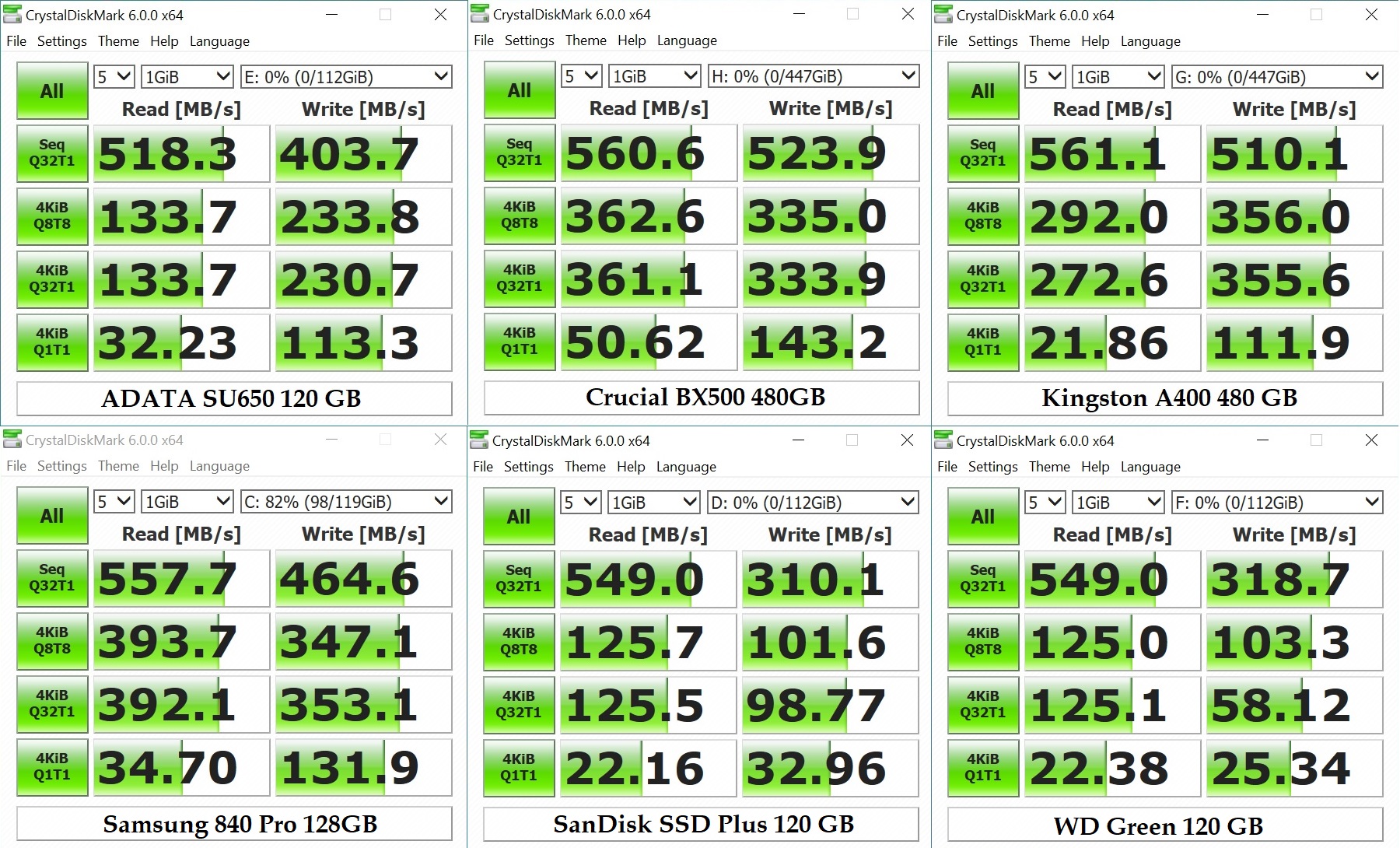 For a better overall perspective, have a look here for the main sequential read and write with multiple threads and ques. 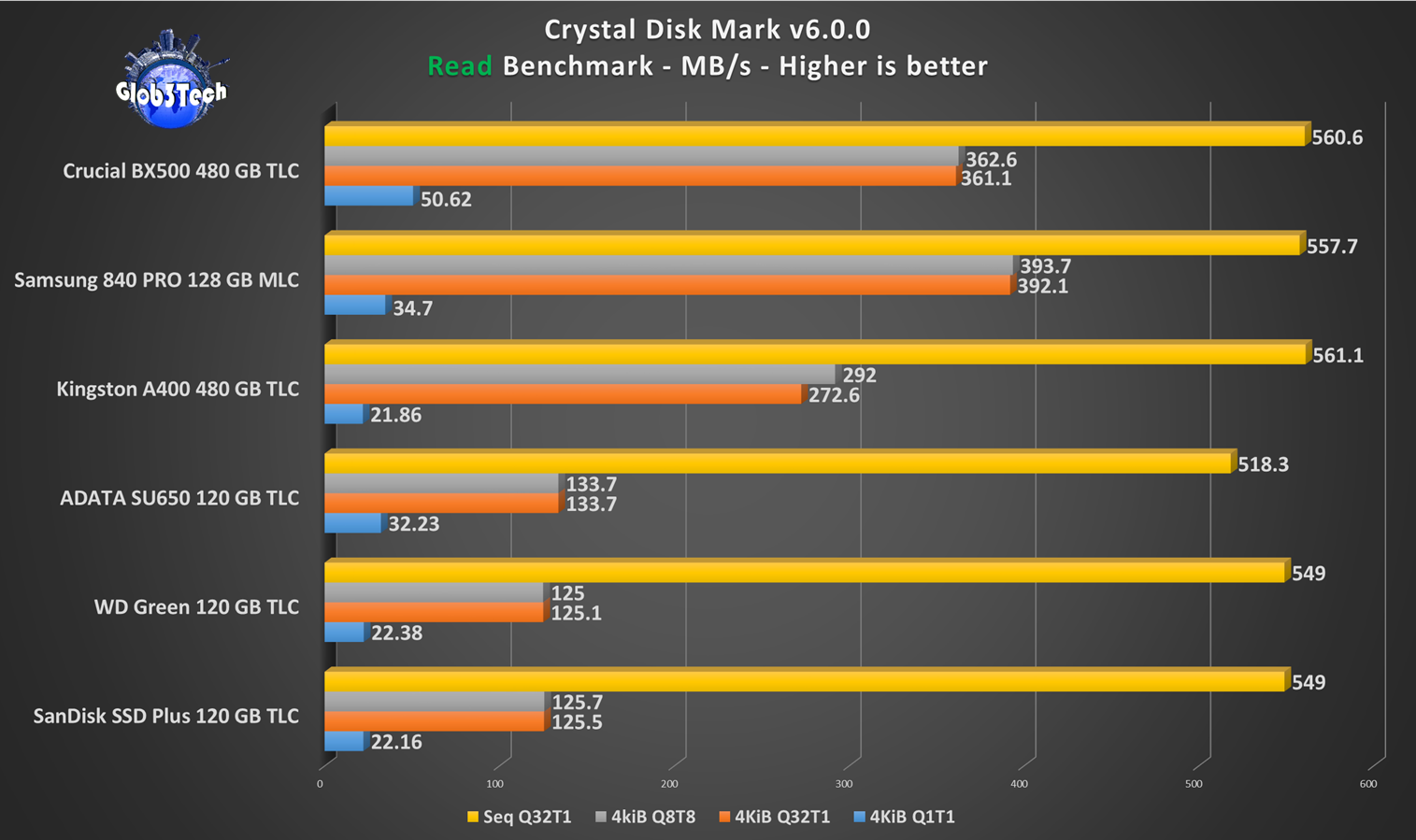 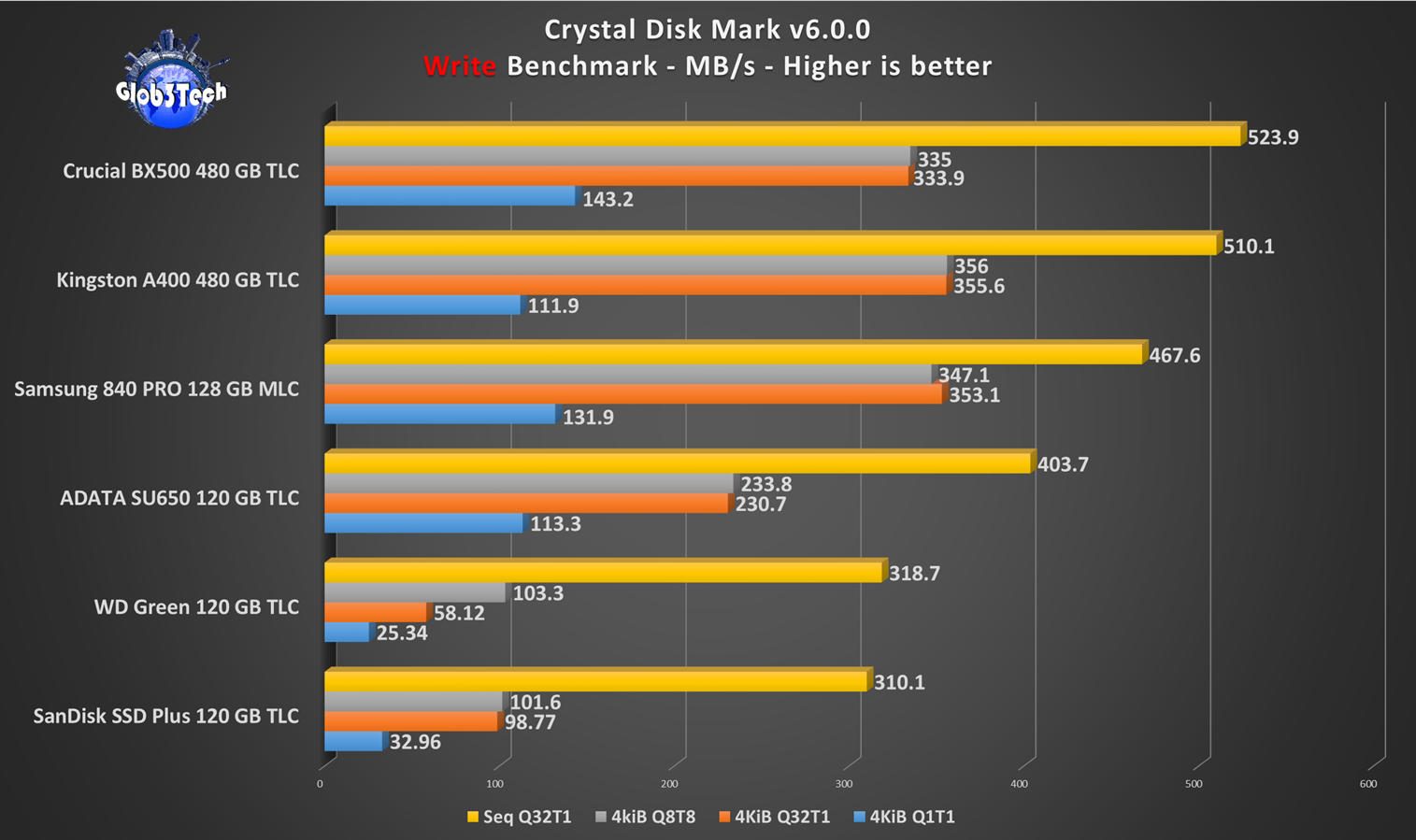 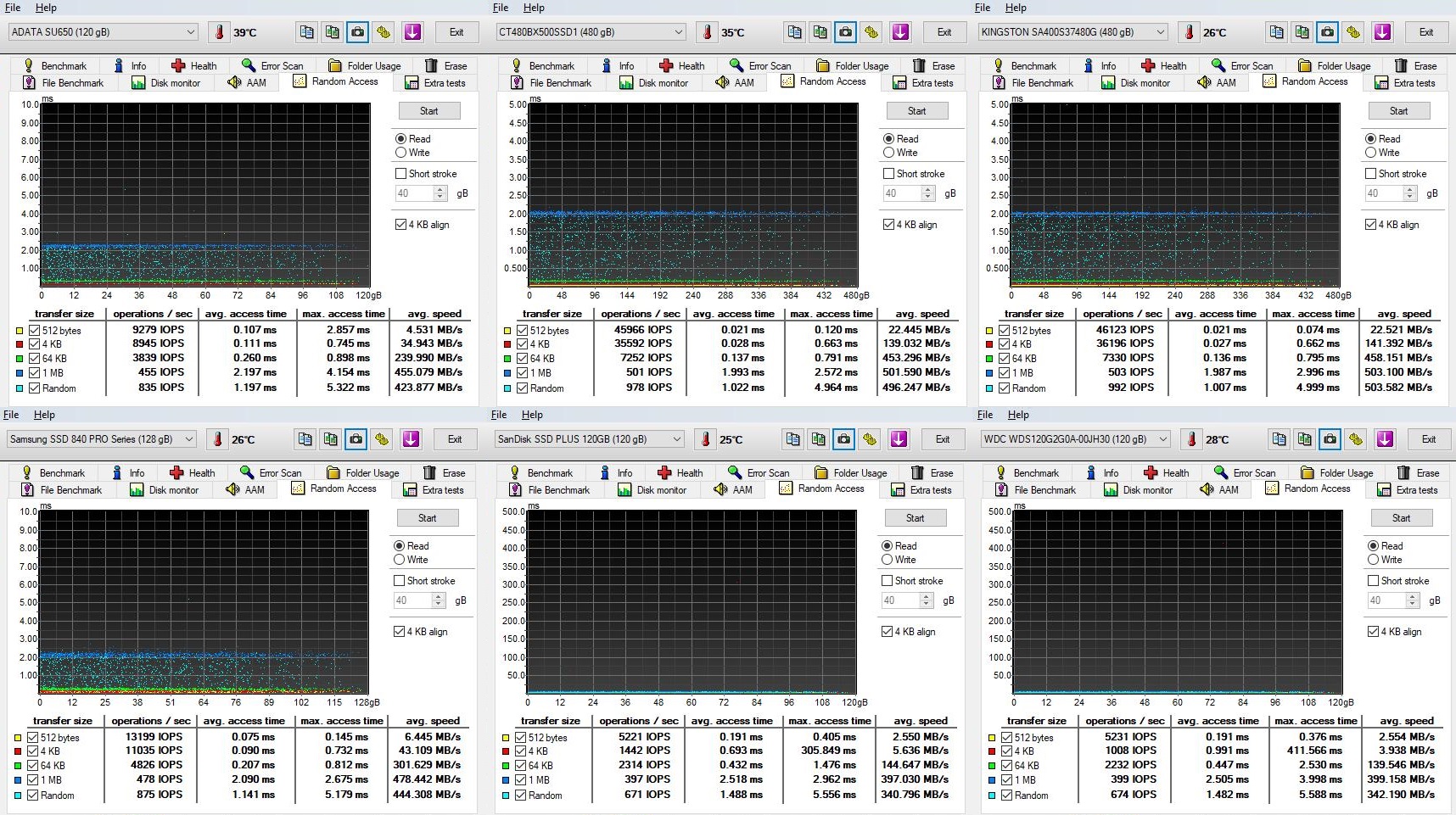 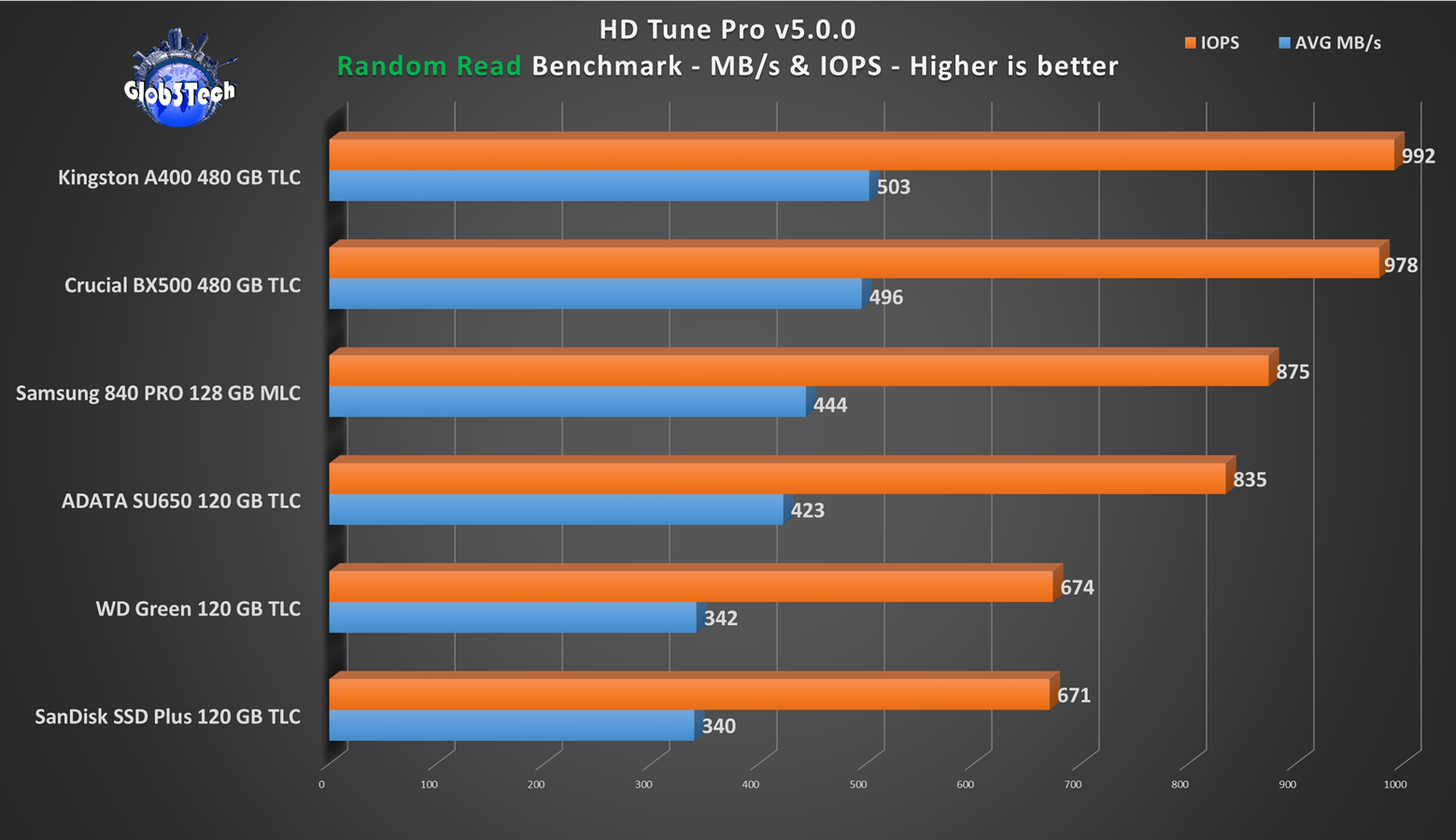 It gives us a total performance index score but more importantly we see the IOPS read and write performance at 4K QD16. 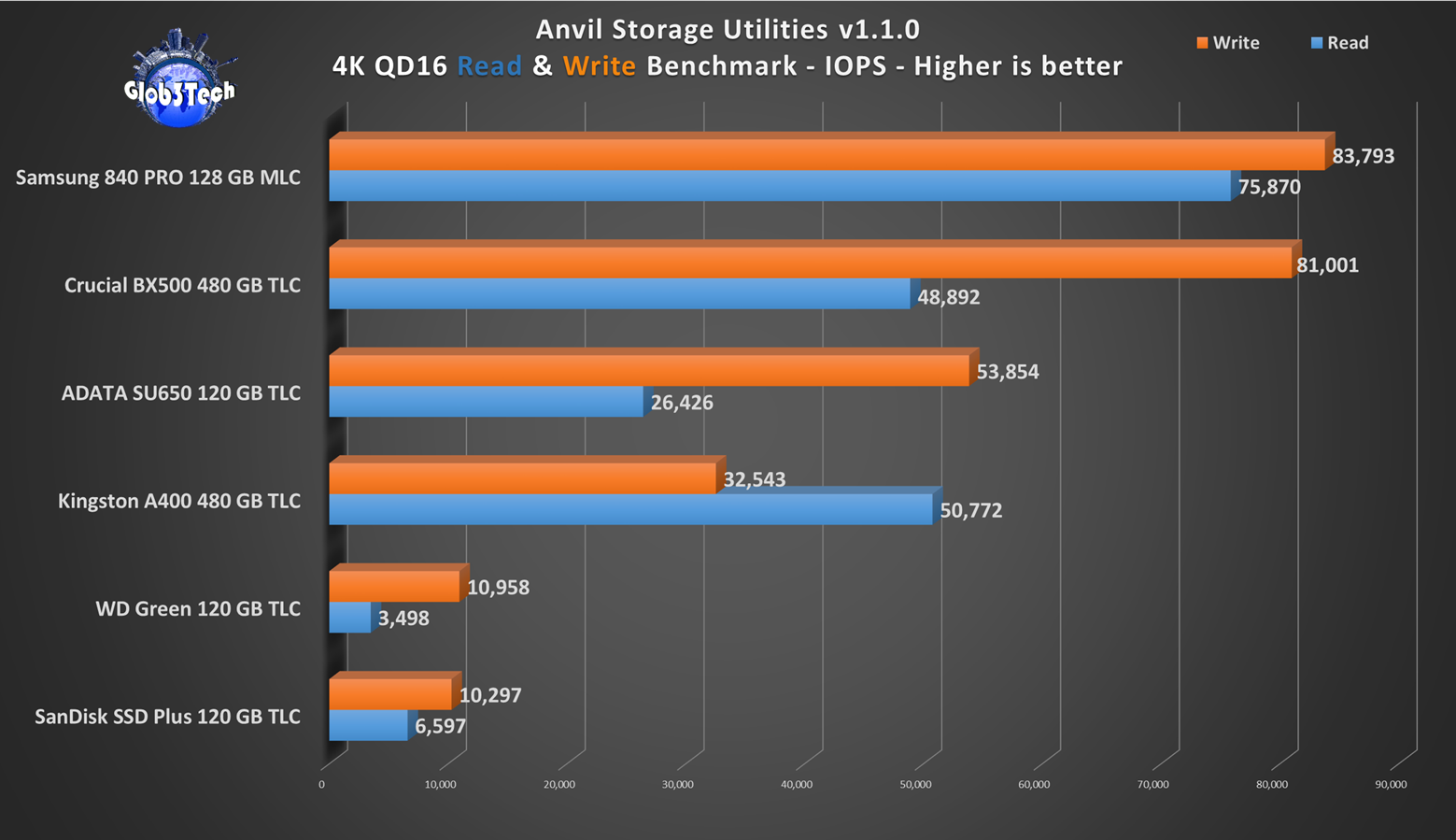 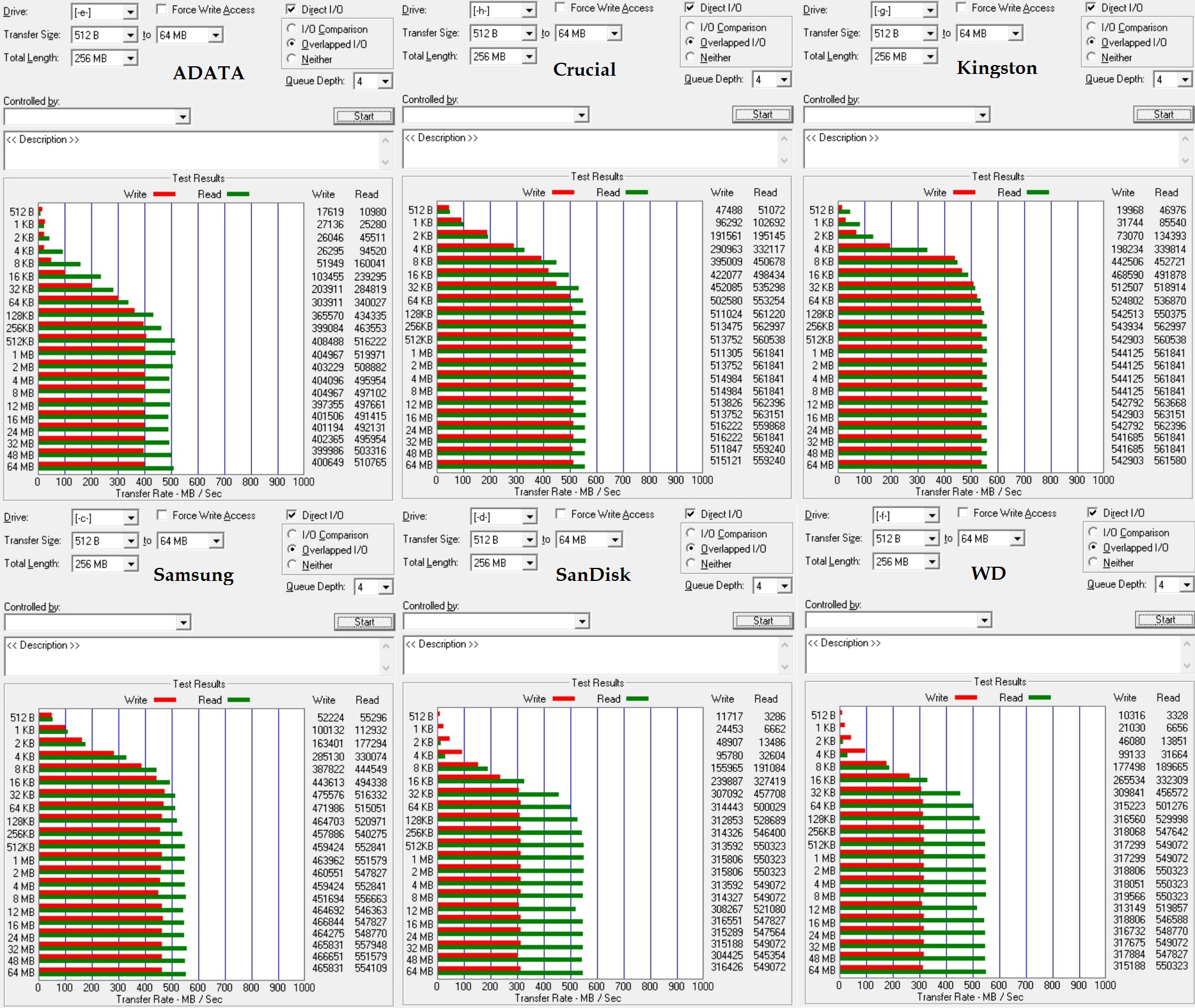 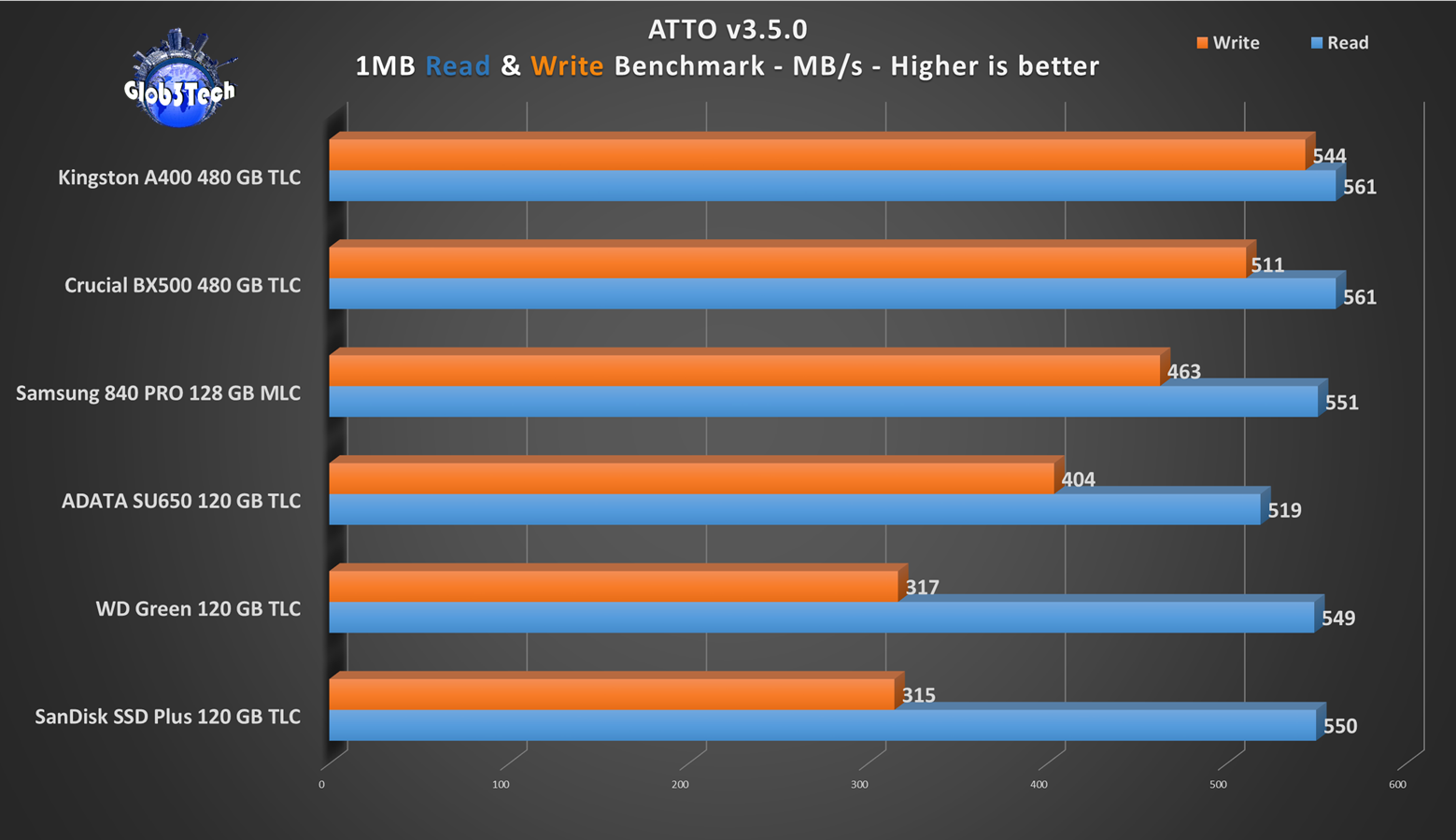 Now for the file transfer tests. We used a 6 GB .iso file which we copied to each drive.

Well then. We have a lot of data to interpret. Let’s take each test one by one.

In Crystal, the numbers in the sequential read and write tests show the theoretical maximum bandwidth as per the advertised numbers. I mean SanDisk quotes them up to 310 MB/s writes for the 120 GB model and our tests are bang on. Crucial for example quotes theirs up to 500 MB/s for the same test, but in our tests we got even higher numbers, so kudos to them. Only ADATA didn’t reach its advertised mark at 50 MB/s short which isn’t that a big of a deal given the small difference. WD didn’t publish any numbers regarding the sequential writes thus we can only say that it did OK when comparing with the others. Kingston is up there in the top list at number two, beating the MLC cells from the old Samsung SSD, while Crucial won this round. Mind you the bigger the drive the better the overall performance. Hence we will compare the Crucial and Kingston together to keep an apples to apples fair comparison.

In HD Tune, where we had a look at the random numbers, we discovered that this time Kingston had the highest average speed but only by a few MB/s in front of the Crucial. Samsung doesn’t count and ADATA takes the bronze prize here.

Anvil shows a different perspective where we see that the Crucial drive annihilates its main competitor the Kingston drive in the write tests by almost 2.5x times more IOPS ! Second place is taken by ADATA while WD and SanDisk show very low numbers.

ATTO shows another close fight between Kingston and Crucial, where the first wins. ADATA again comes in 3rd and the rest go home with lower write numbers when compered to the ADATA which is also 120 GB as the WD and SanDisk.

Finally the 6 GB file transfer. Again we have mixed numbers and results. Crucial wins here since its SLC cache didn’t fill up and maintained a very high 470 MB/s all the way through. Kingston, besides the anomaly at the end, also maintained a 400 MB/s as an average write. This time 3rd places goes to SanDisk which did it with an almost 300 MB/s as an average, even after its cache had filled up. ADATA had a very controlled performance decline finishing at around 190 MB/s as an average. Unfortunately WD performed the worst, barely averaging 100 MB/s from beginning to end.

We are so close to the next generation of cells becoming available into the market, the QLC (Quad level cells) which will be the final nail in the HDDs coffin regarding prices. We expected the BX500 series to already incorporate them but apparently the technology is not ready yet. Until then, Crucial’s new BX500 series still relies on Micron 2nd Generation TLC 64 layer 3D V-NAND and made a really great budget SSD, considering that for £67 you get half a terabyte while Samsung’s 860 EVO 500GB drives retails for £90 !

Then we gave it a direct competitor at the same price and capacity from Kingston, and in the end we can consider it a tie since both were neck and neck in all of the tests, only in Anvil’s IOPS is where Crucial showed its superiority from its SLC cache, while Kingston has no mentioning of such buffer, and at least, it shows that. But Kingston has a small construction advantage still using metal and offers a 1TB model as well; Crucial doesn’t. See what I mean, it’s very close. Still, which ever brand you go for between the two, you will not be disappointed as per our “Value King” recommendation.
.
As for the 120 GB drives, the ADATA SU650 was the most consistent out of the three same capacity drives and deserves a prize as well, as our 2nd recommended choice award. SanDisk and WD always came in last, thus they go home.

Many thanks for Crucial for supplying us with the test sample !