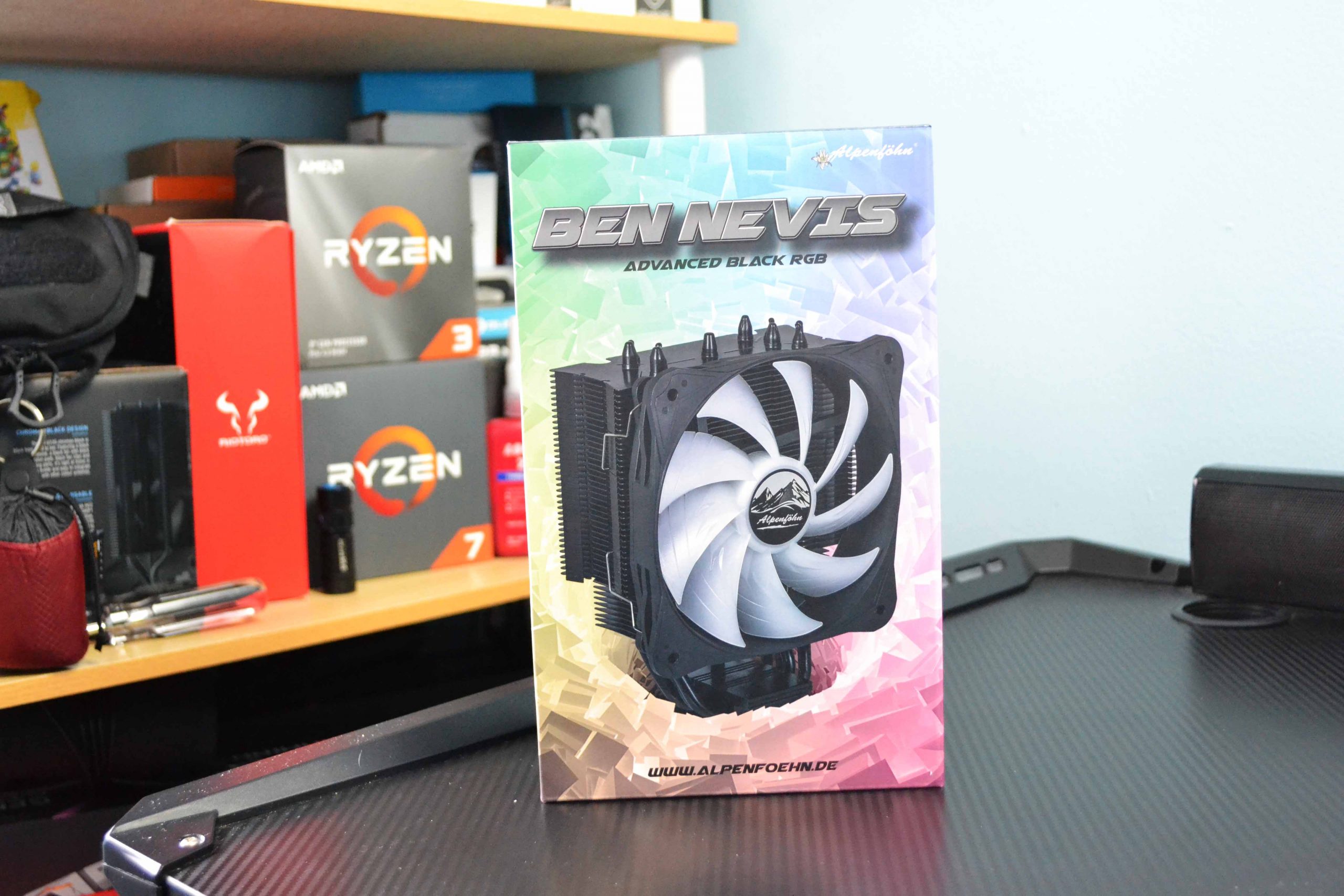 If you are on the look out for a budget CPU cooler, this newer version of the Ben Nevis from Alpenföhn is a good option alongside our recently reviewed budget king the, Cooler Master Hyper 212 RGB.

This marks the 3rd iteration per say of this CPU cooler from Alpenföhn since the “Advanced” superseded the regular Ben Nevis in all areas. Now the final version is this “Black RGB”, which we are reviewing today. It brings, as per the name implies, an all black paint job and LED lighting with RGB functionality and various effect modes.

Alpenföhn is a company which manufacturers cooling components for IT systems, which started its activity in 2008. The Alpenföhn line includes CPU coolers, fans and accessories which include: thermal compound, storage cooling systems and fan mounting systems.
The Alpenföhn brand was created by the company EKL AG, founded in 1995, it is a company specialized in manufacturing industrial cooling solutions.

It has a very attractive price tag and currently you can grab one in the UK from Overclockers.co.uk at £29.99 or CaseKing.de in Germany for €29.15. 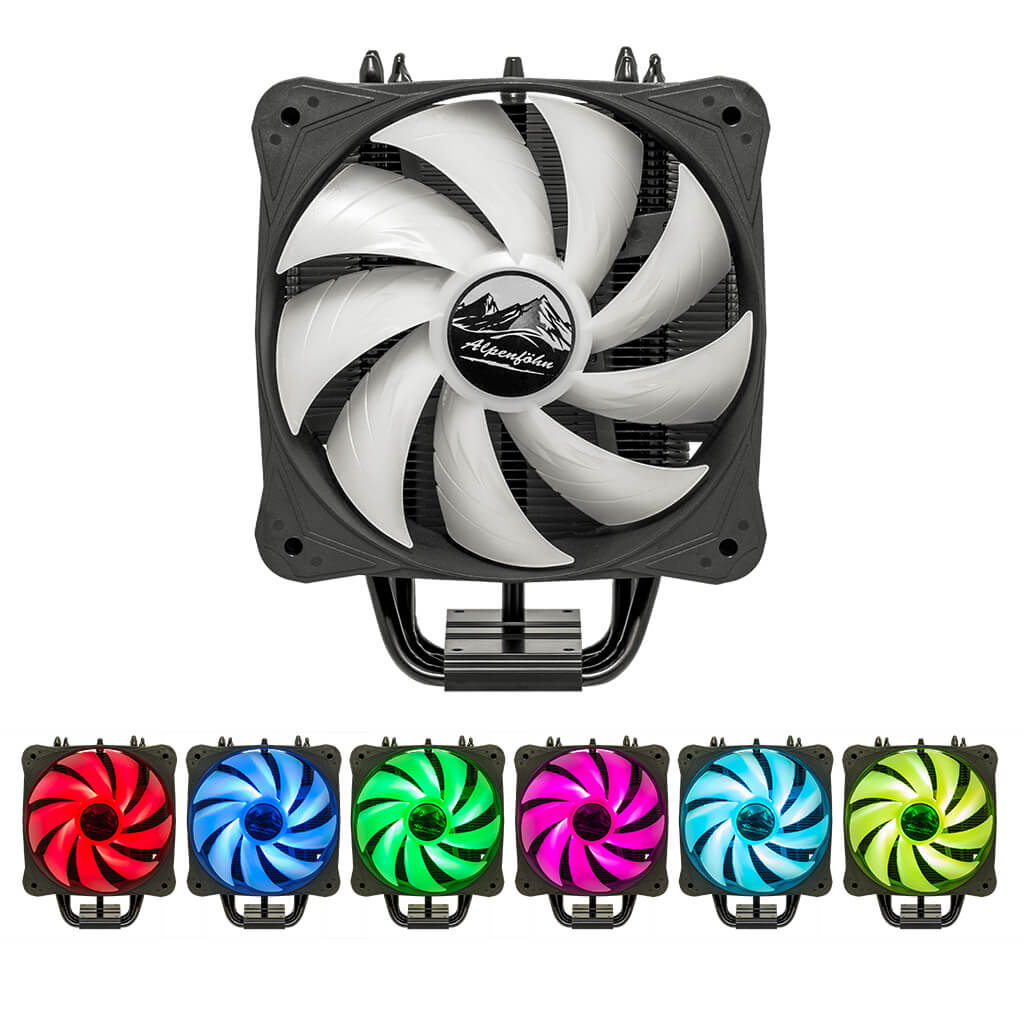 The Ben Nevis Advanced is a more powerful version of the normal Ben Nevis cooler in every respect – now in a new Black Edition and with chic RGB lighting. The heat exchanger has been extended with more fins and an additional heatpipe, which significantly improves the cooling performance. The larger and more powerful fan also reduces noise emissions.

The four 6 millimetre thick copper heatpipes are now in direct contact with the CPU, absorbing the heat directly from the processor and then transferring it directly to the countless aluminium fins. This process ensures superb cooling with conventional heat-conducting paste. The asymmetrical design allows all RAM slots to be fully loaded.

The pre-installed 130 mm fan, with PWM functionality, provides a strong air flow of 95,4 m³/h for a fast and efficient dissipation of waste hate. Despite its fast and efficient 150 Watt TDP cooling, the fan is astonishingly quiet due to its conical design and performs at a max volume of 25,8 dB(A) when spinning at a maximum of 1.500 RPM. 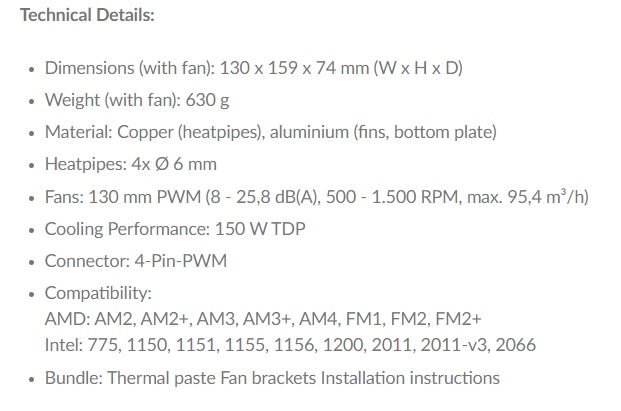 The packaging makes sure that you know that this CPU cooler has RGB functionality from its multicoloured background with a visual depiction of the product placed in the middle.

The back provides all of the main specs and features. 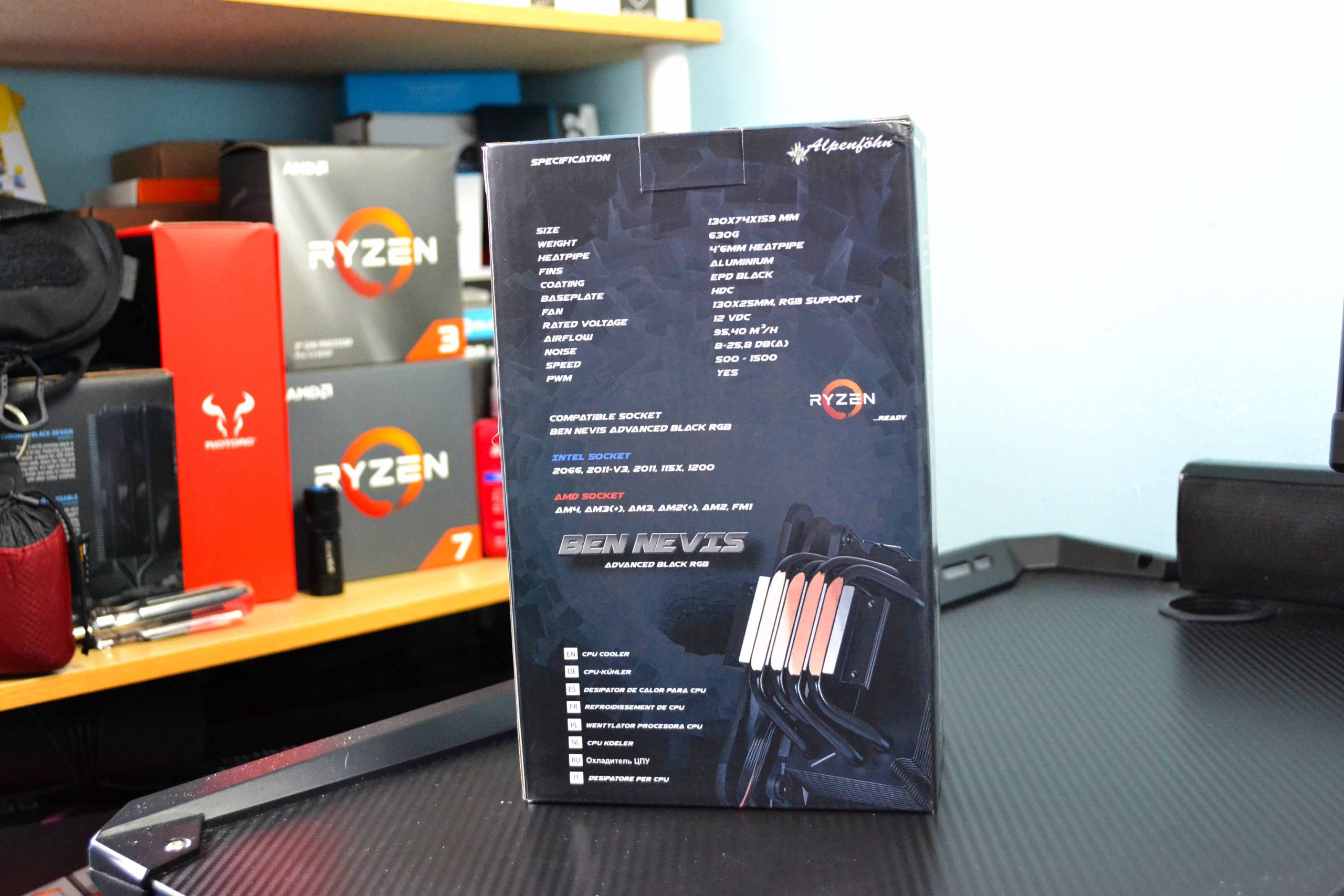 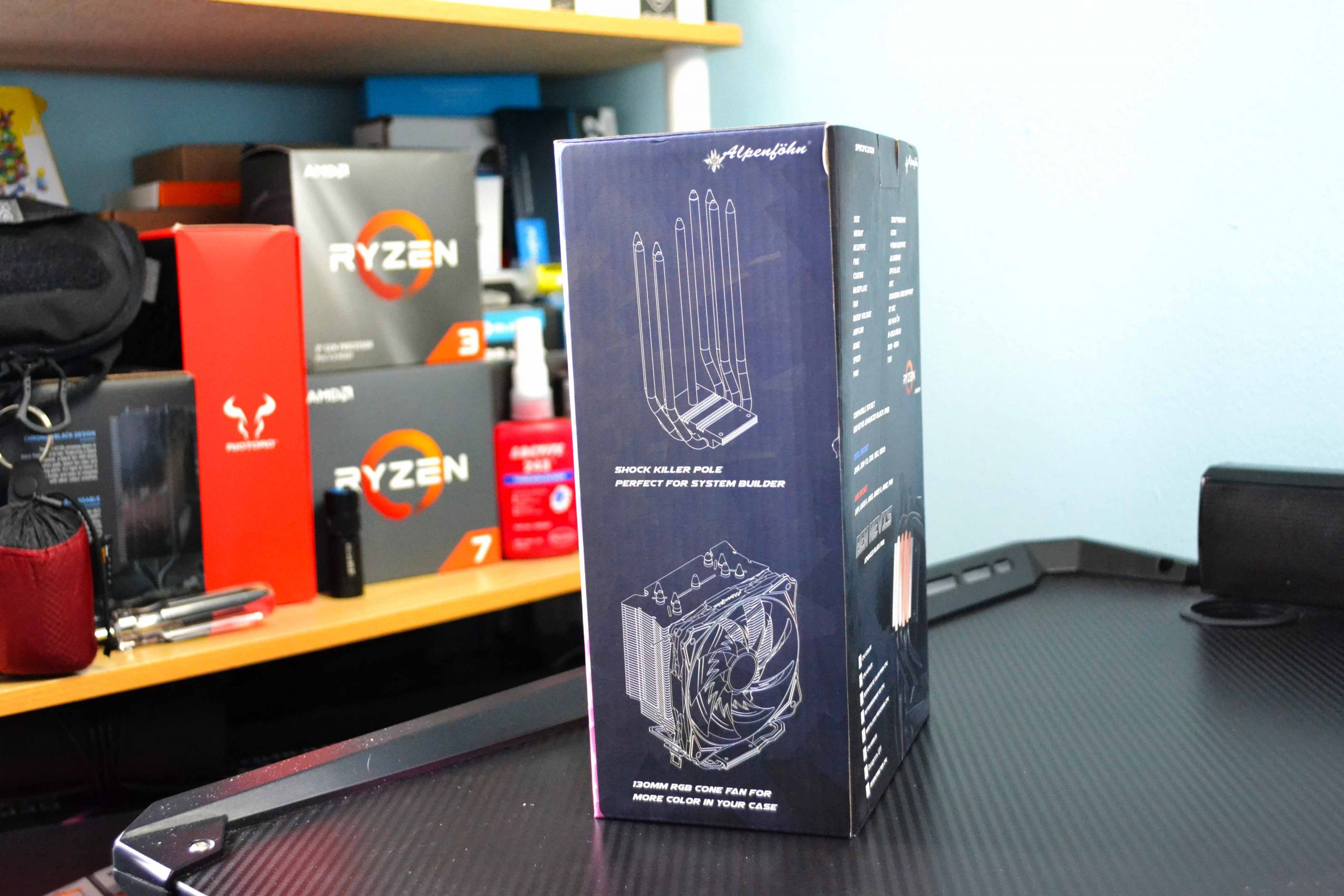 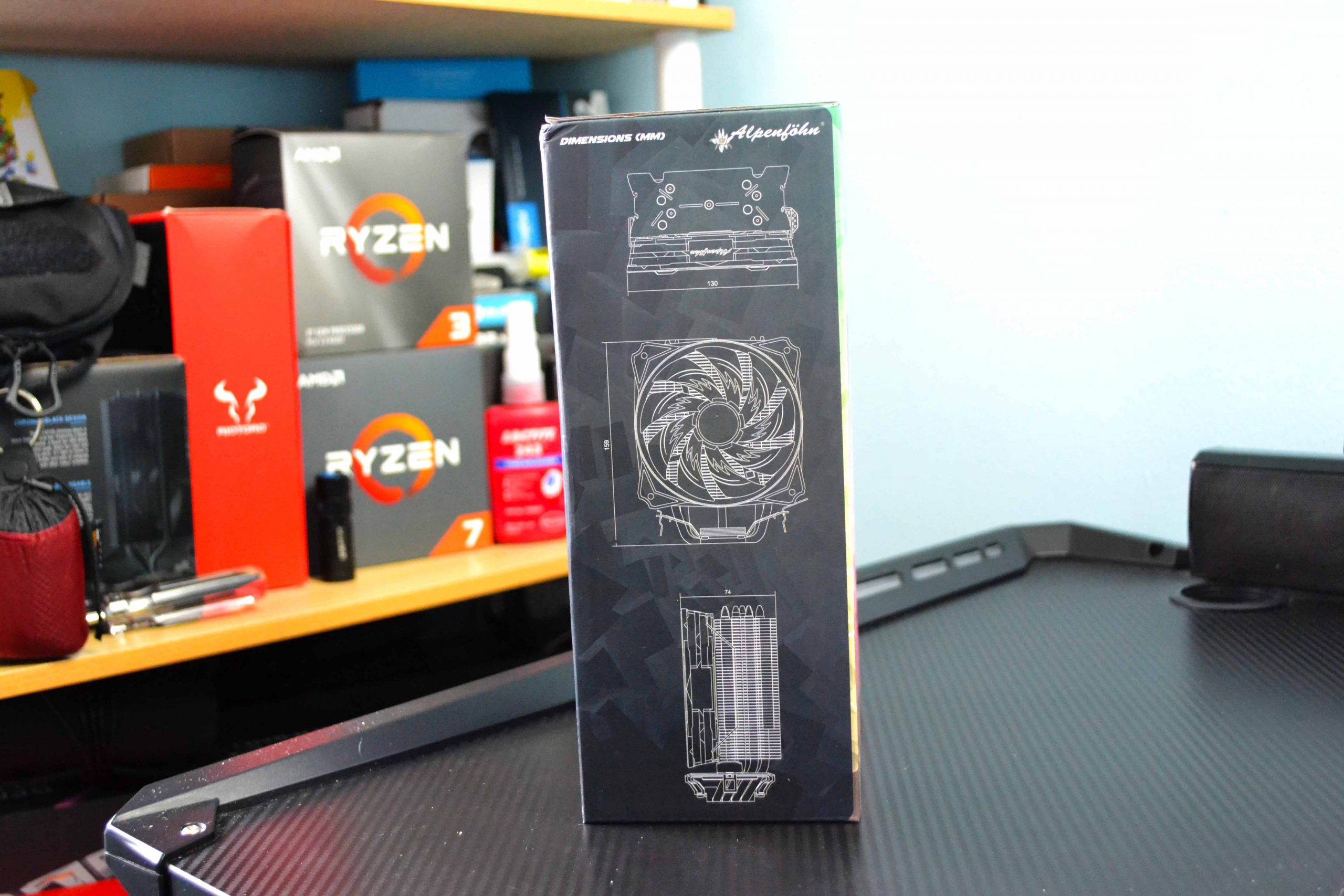 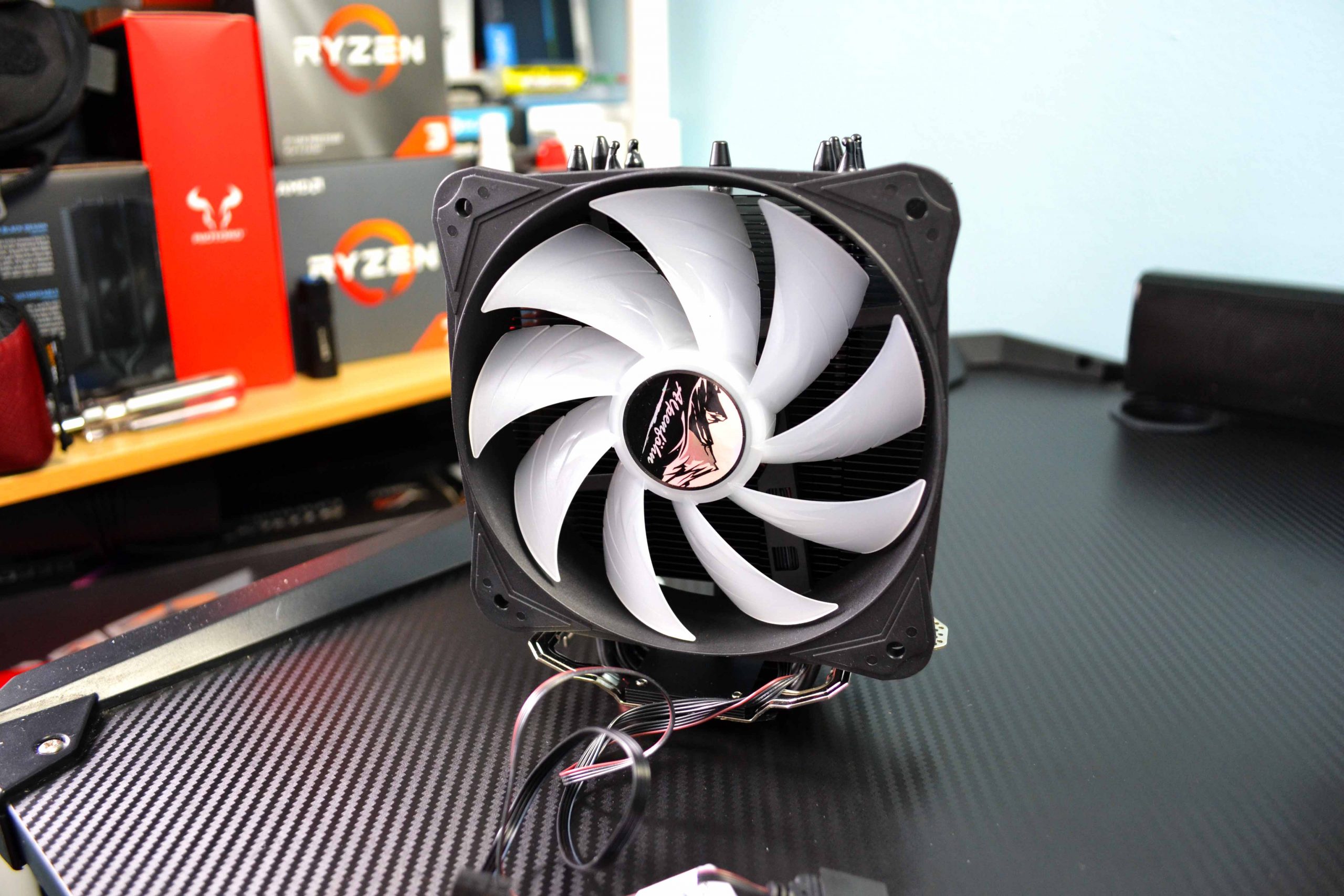 The 130 mm RGB PWM fan is attached via metal clips and we notice that the Ben Nevis comes with the stock AMD AM4 retention clip-on kit. 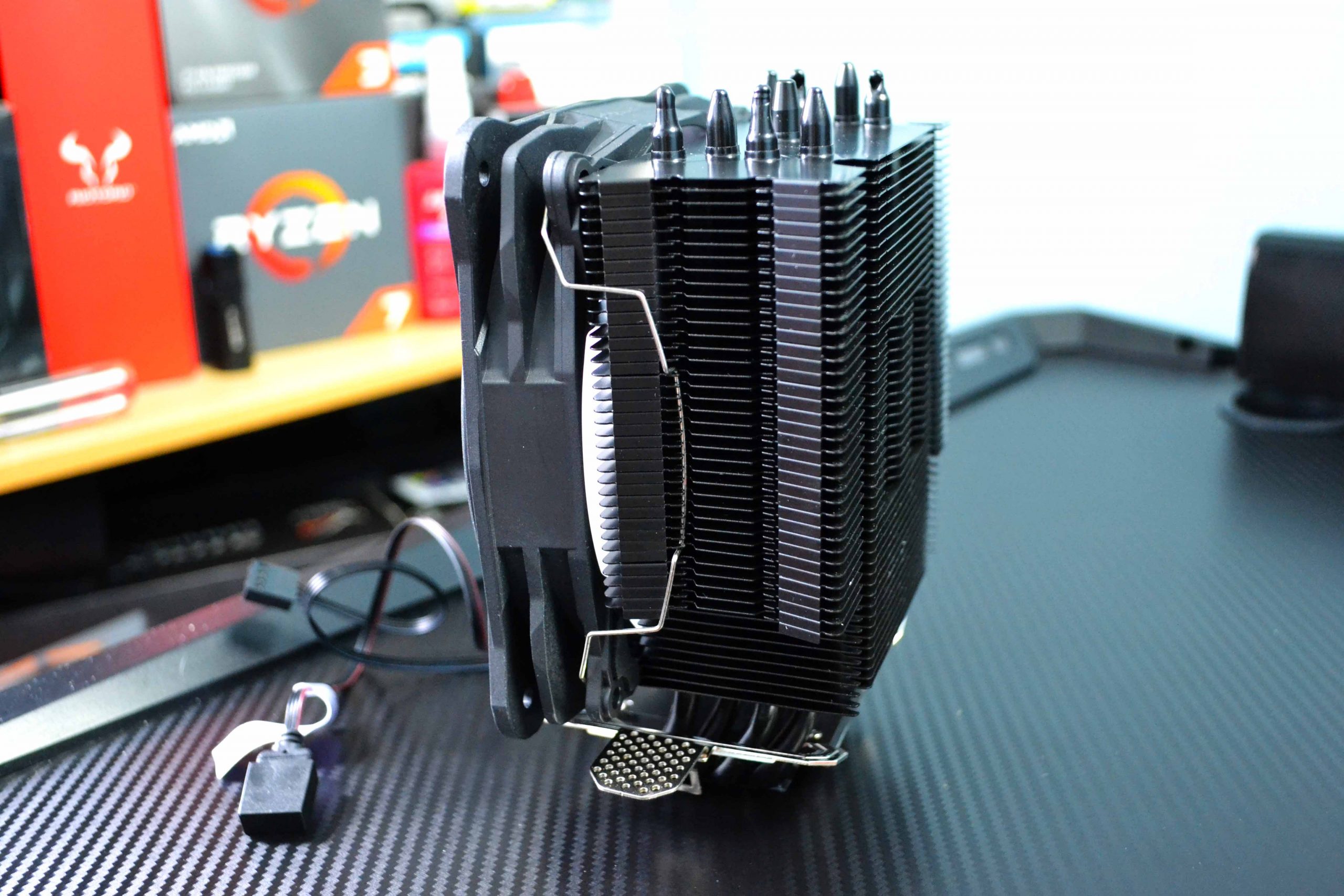 We have 4 main 6 mm thick cooper heatpipes that form the so-called Heatpipe Direct Touch technology (H.D.T.), basically they are in direct contact with the CPU’s heatspreader, which allegedly significantly improves heat transfer.

We count 49 aluminium fins that are reinforced structurally not only by the heatpipes but also by the middle “shock killer pole” which you can see it better from this angle. 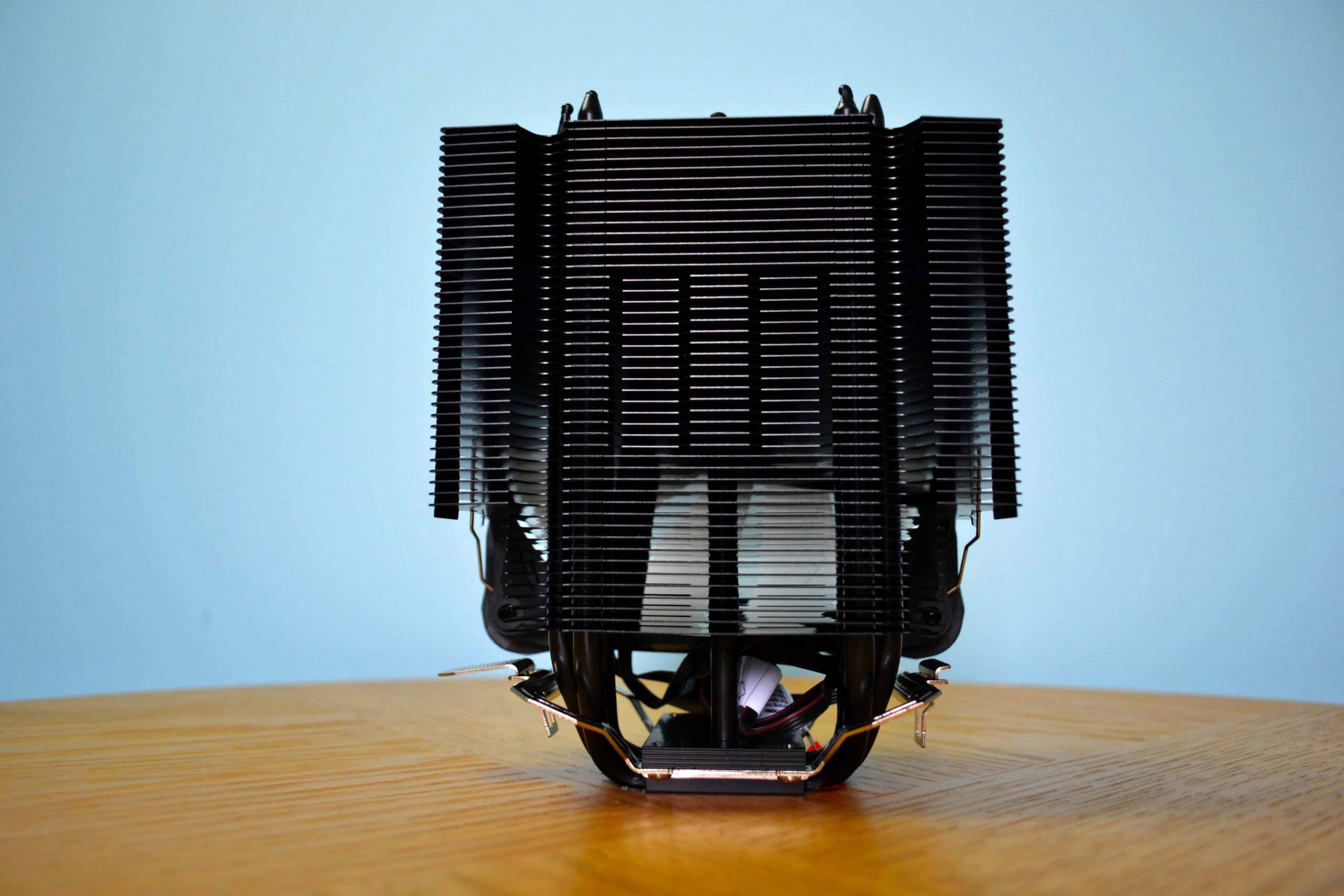 The top has a minimalist finish with matching all black heatpipe caps. 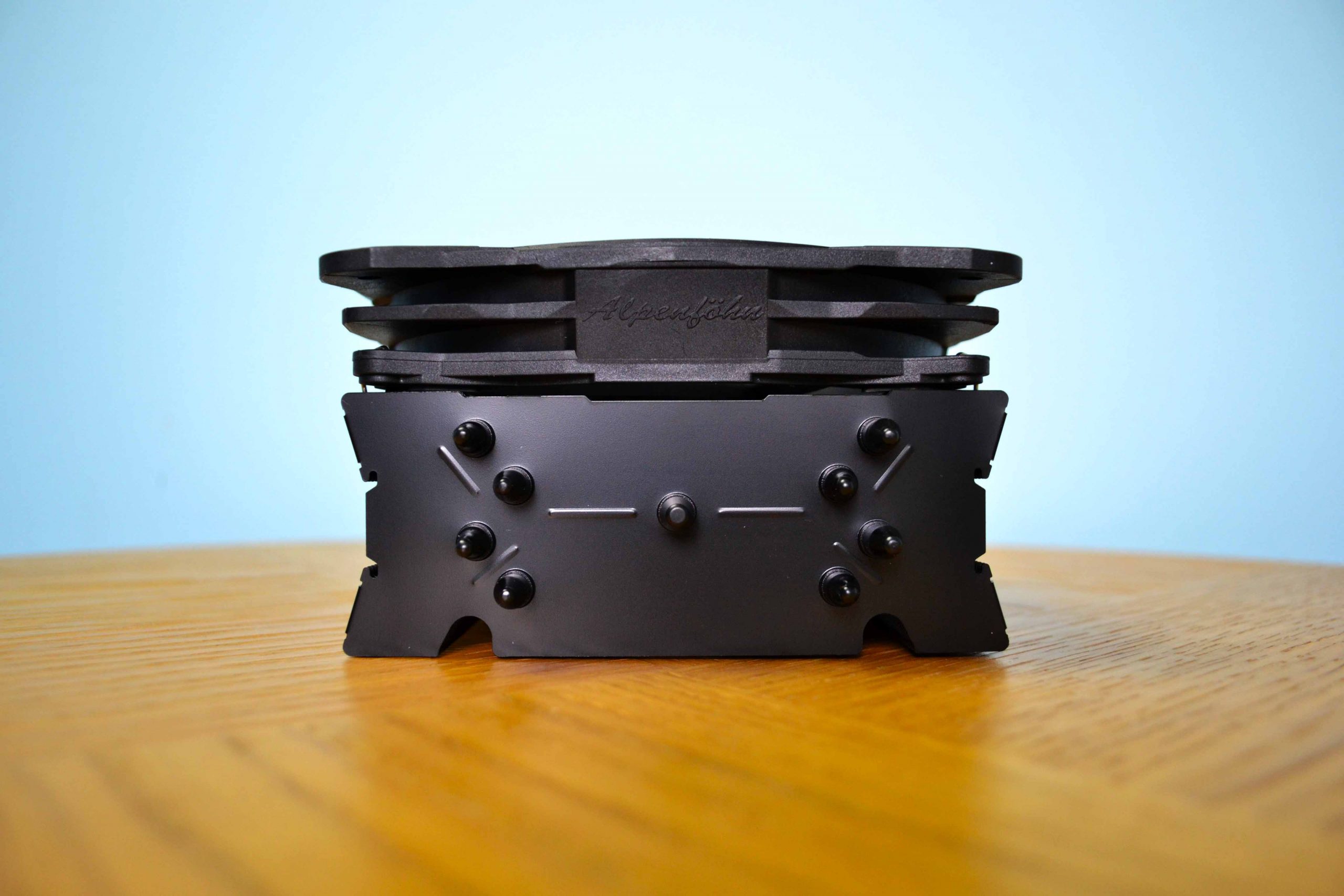 Taking of the fan, we notice that the heatsink has a slight offset which will improve RAM compatibility meaning the fan will not touch even the tallest heatpsreader RAM. 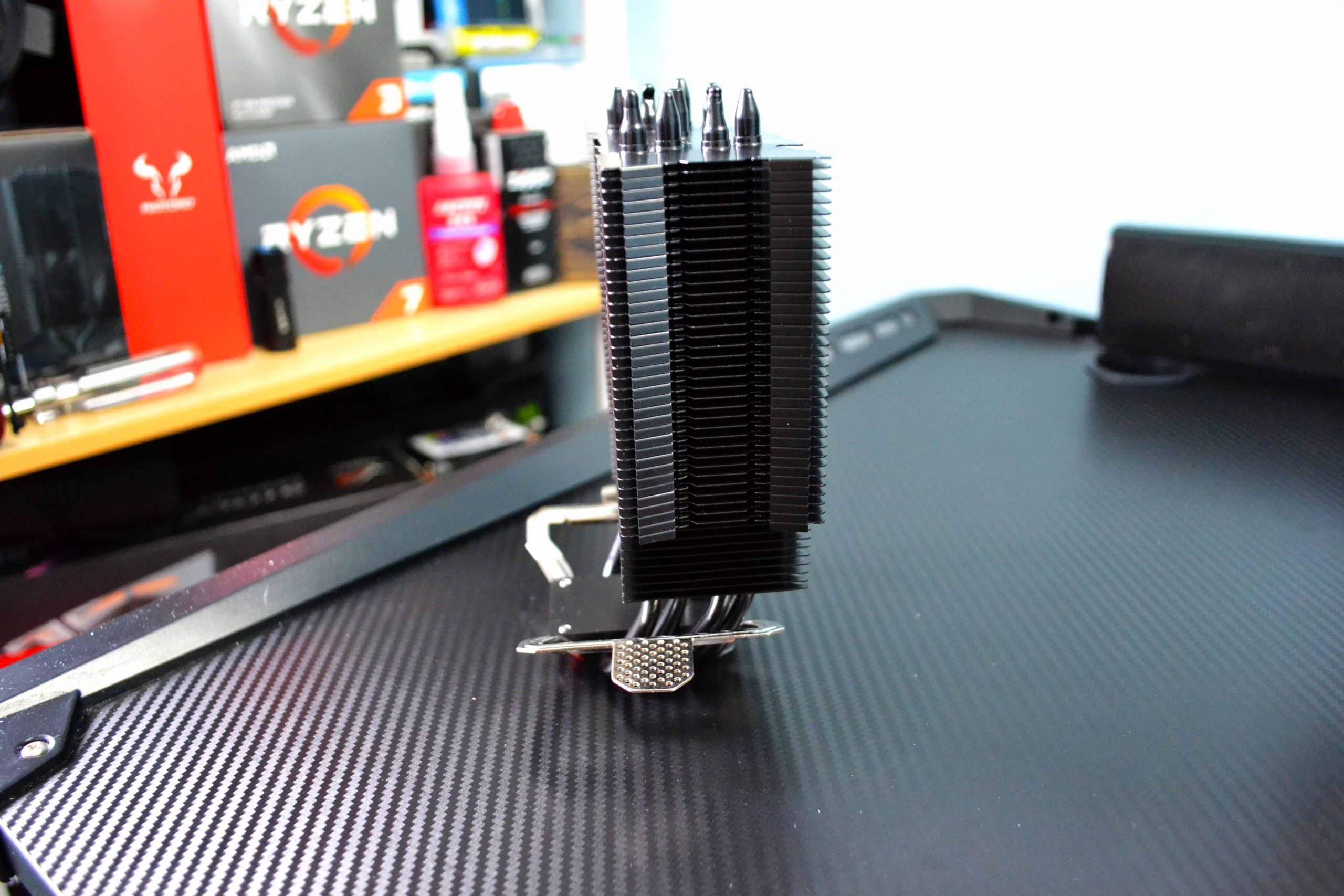 The included accessories are as follows:

Well, since we are using the AM4 socket from AMD, this will be a very quick and short presentation since the only thing you have to do is secure the cooler to the motherboard using the stock AM4 brackets.

To make things even more interesting, as you can see, we are using an ITX board where space is a premium so that means we will have a lot of components crammed in next to each other thus a perfect test for any CPU cooler. So here it is installed and that is an extremely tall RAM memory stick next to a low profile one. 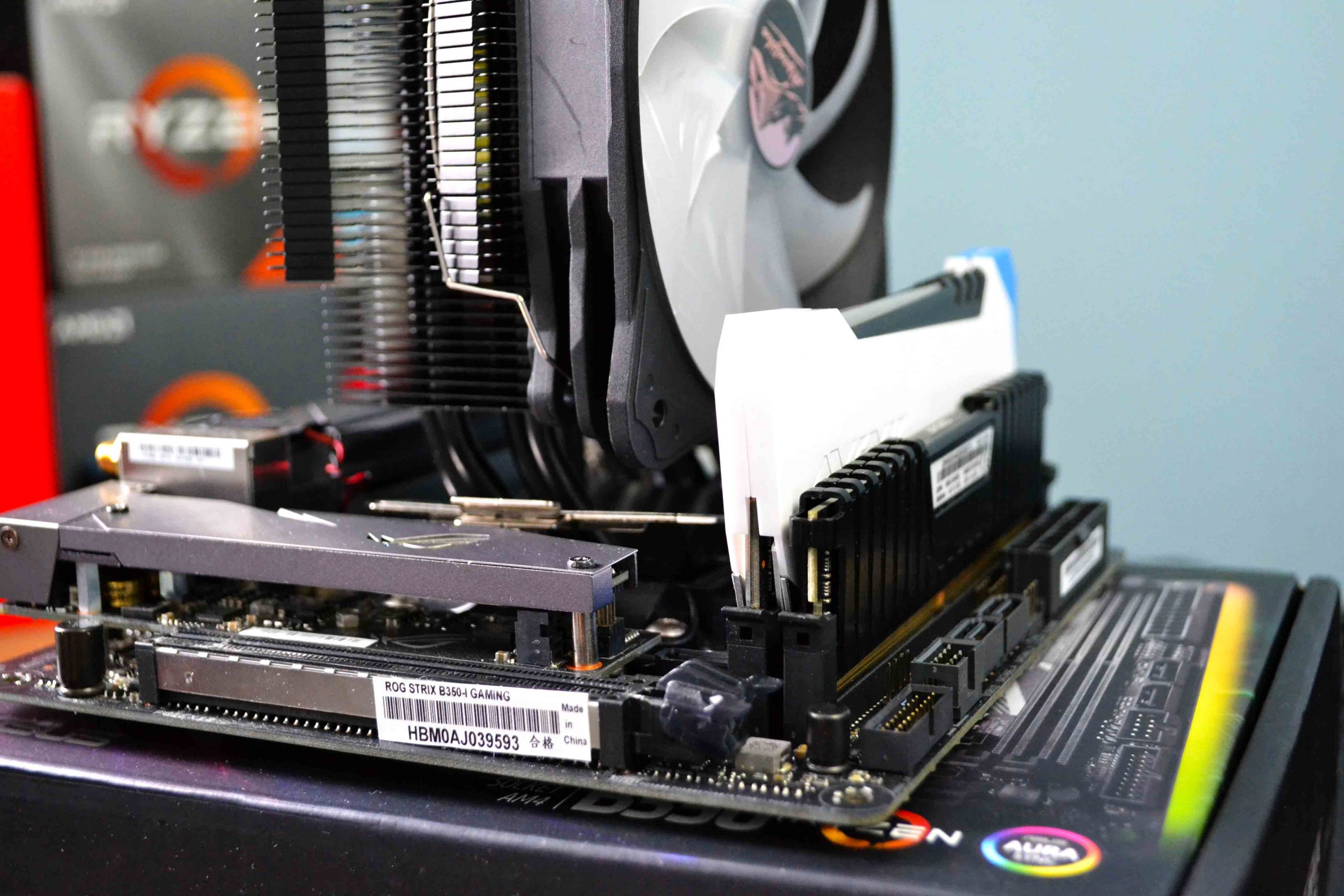 As you can see, thanks to that offset design, there is no problem what so ever.

Here is everything installed and ready to fire up. 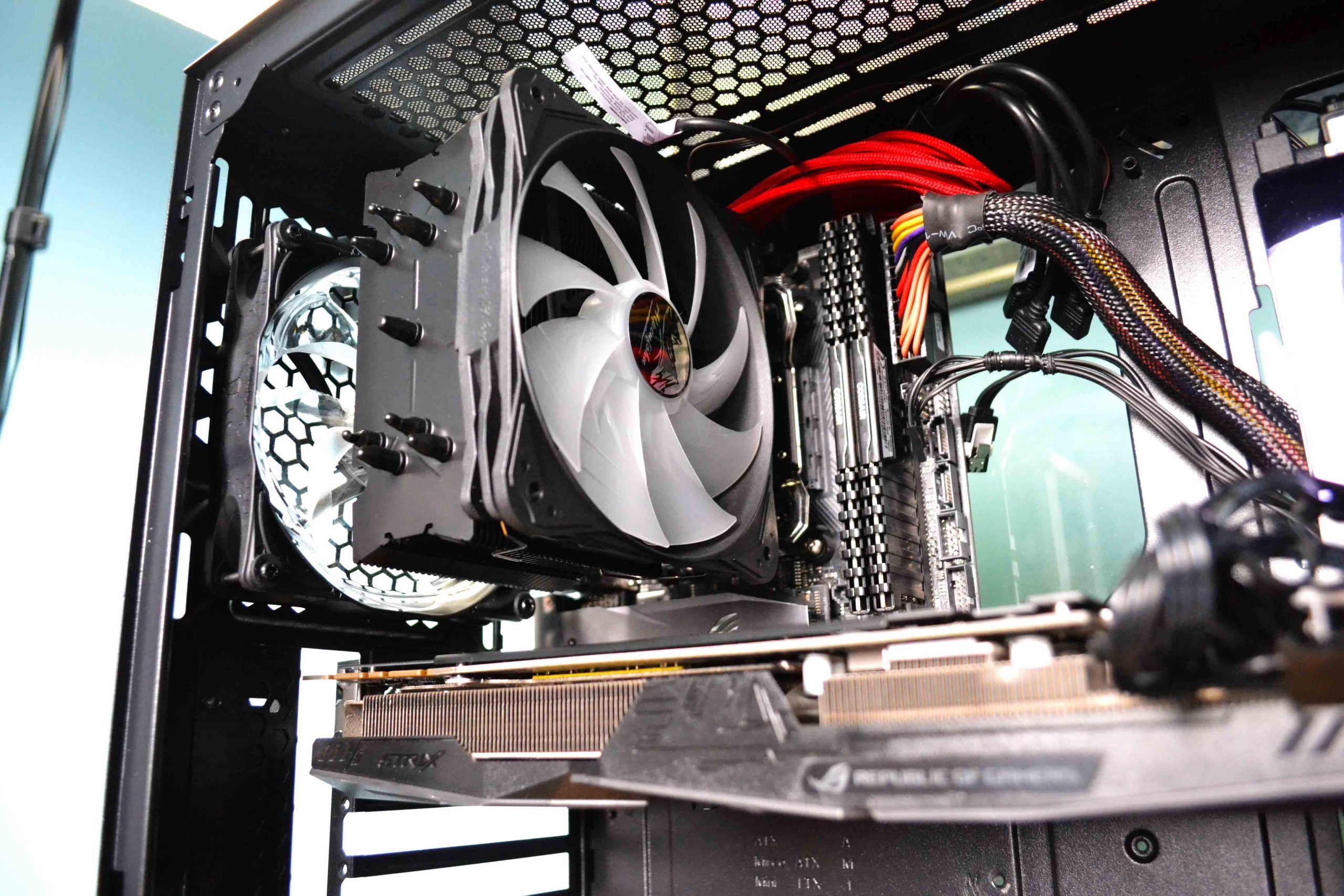 As for the RGB, as you would expect you can control it via the motherboard software or if not you can do it with manually with the included remote. 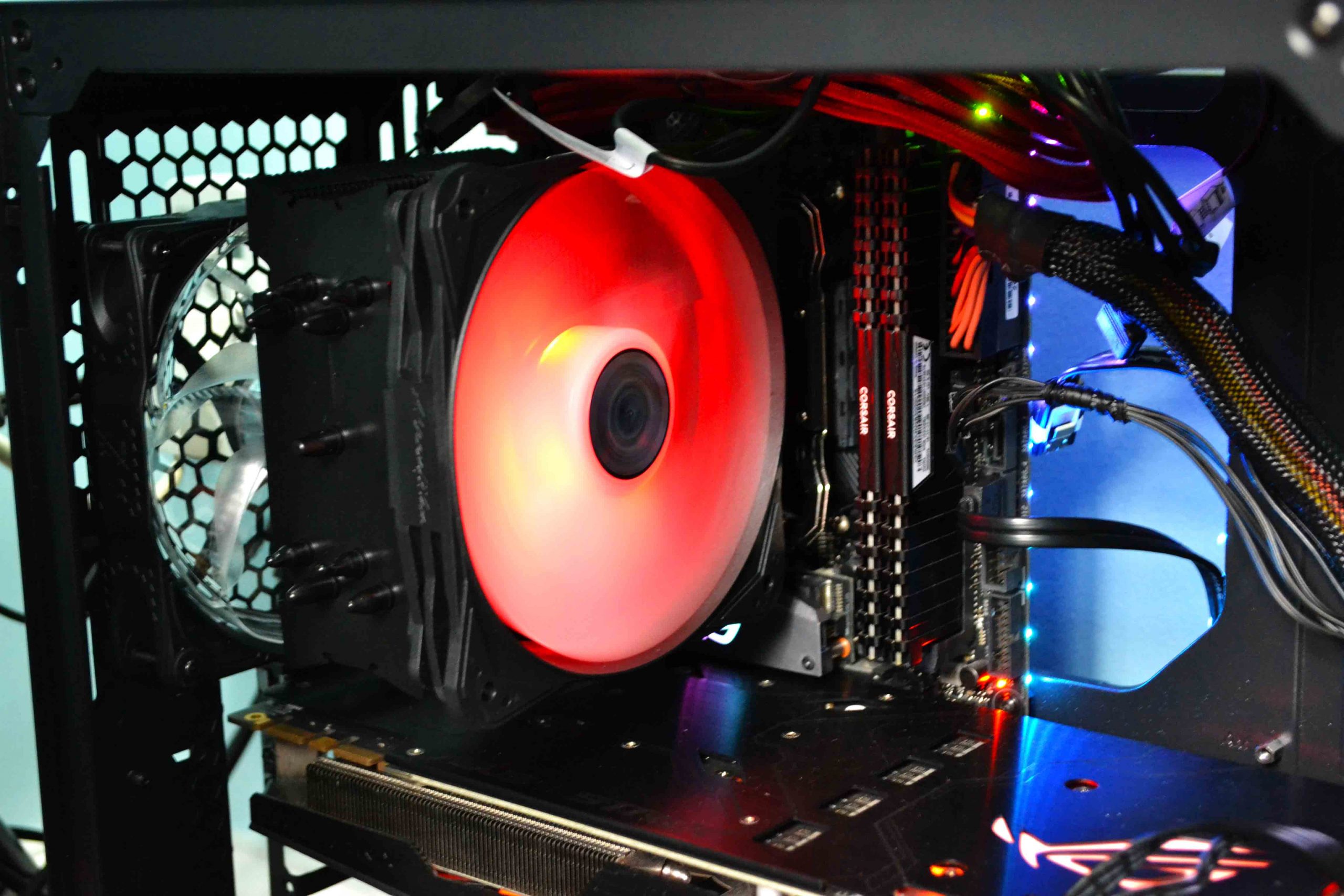 But I must point out that it’s a bit weird how they decided to implement this. Because you have to install the 4 way spliter even if you don’t plan to use the remote. Their argument is that you can attach extra RGB strips or RGB fans but I find this a further complication since it clutters the WM unnecessarily. The stock fan should have had its own RGB strip connector and then make the spliter optional.

Resolution for our test game Desperados 3, is set at 1920×1080 with everything cranked to the maximum quality settings.

Let’s start in order of CPU load difficulty. First up is the Cinebench R15 test. On the left we have the CPU in stock form while on the right we have it overclocked. So far the Ben Nevis scores a win since it beats the BeQuiet! Slim which is double the price.

The Cinebench R20 is a more modern up to date multi core benchmark suite. Naturally we will see a bigger load on the CPU and thus a larger temperature figure than the R15. We have similar results and still the Ben Nevis maintains a small lead over the BeQuiet! competitor.

In AIDA64 we isolated the stress test just for the CPU therefore we should get the highest stress scenario for the CPU. Mind you the R20 proves to be almost as demanding as the stress test so the numbers are very close. The BeQuiet! slightly takes back the lead.

We try the new Desperados 3 game which apparently likes to use multi-threaded CPUs so this will be an excellent test. 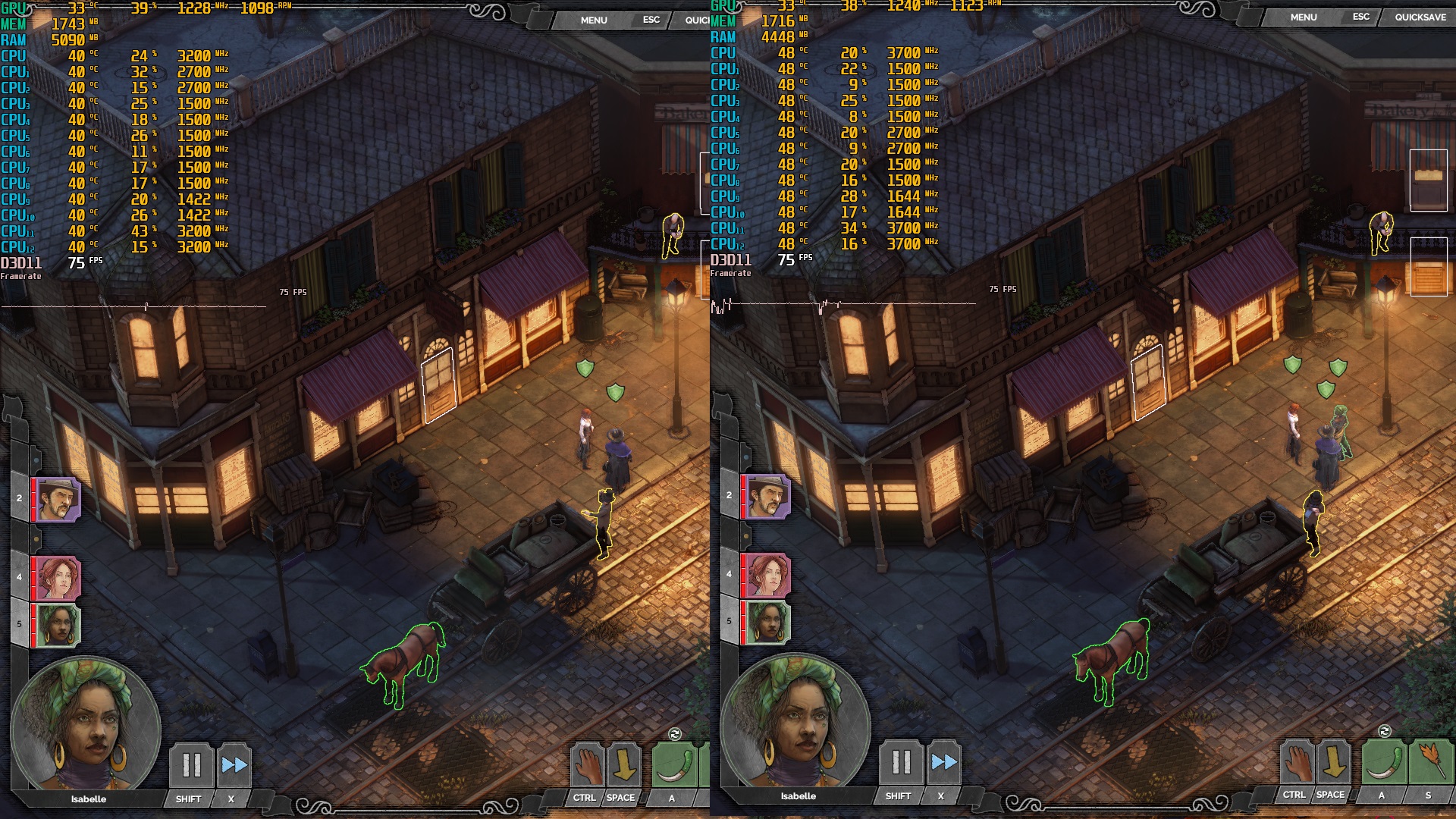 Now let’s inspect the noise levels. The Ben Nevis is fairly quite overall but it’s very hard to beat the Noctua and BeQuiet! series here. 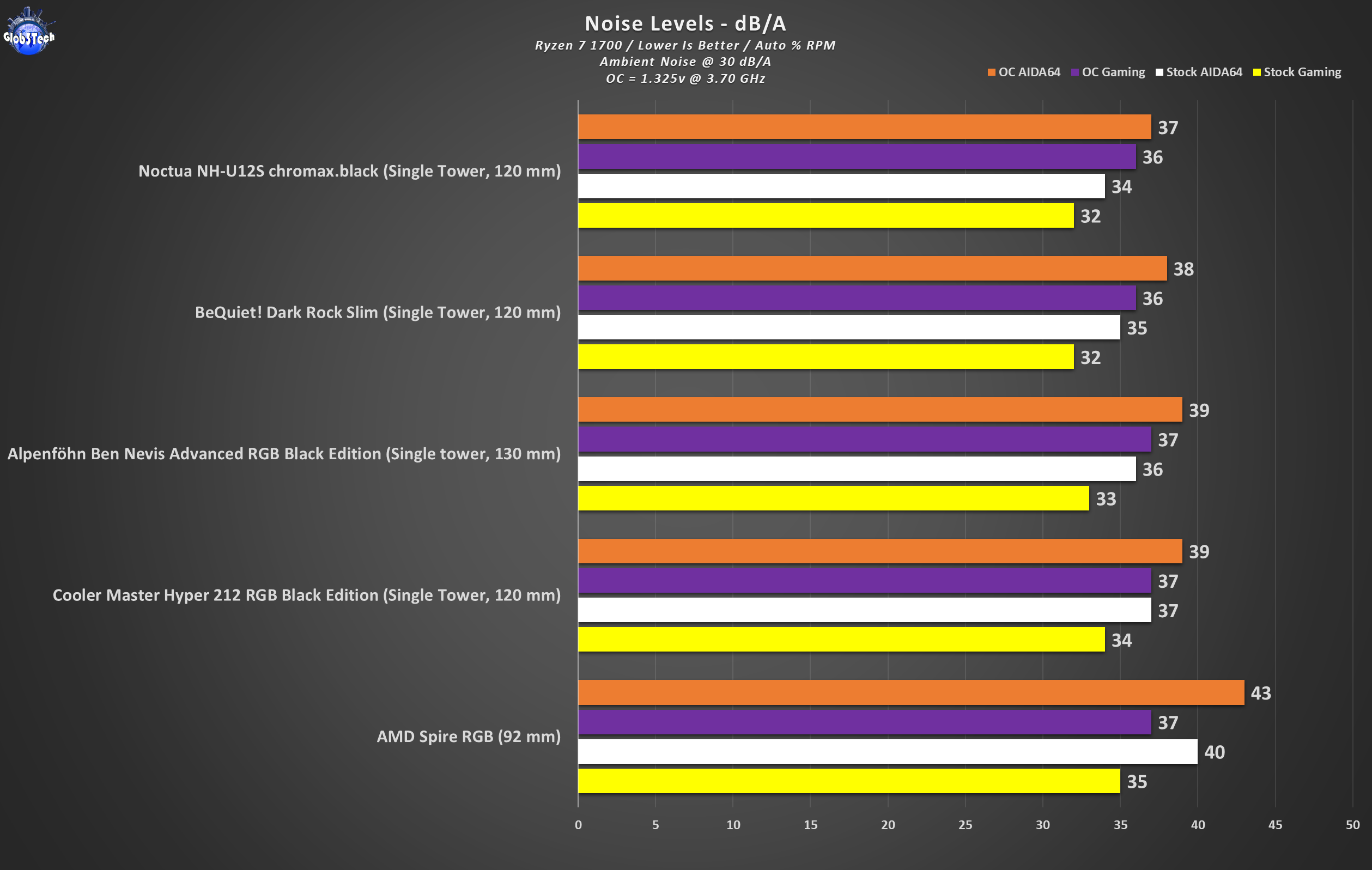 This new revision from Alpenfohen for their Ben Nevis, which is a single tower heatsink CPU cooler, is a win because it does the job across the board. Having a TDP rating of 150W we clearly see that it can handle even an overclocked scenario. The RGB and all custom black paint are even more welcomed and all of this for just $30, we can clearly state that the Ben Nevis Advanced Black RGB truly is a bargain.

– Weird implementation regarding the RGB controls with extra wire clutter

Many thanks to Alpenföhn for supplying us with this nice cooler !