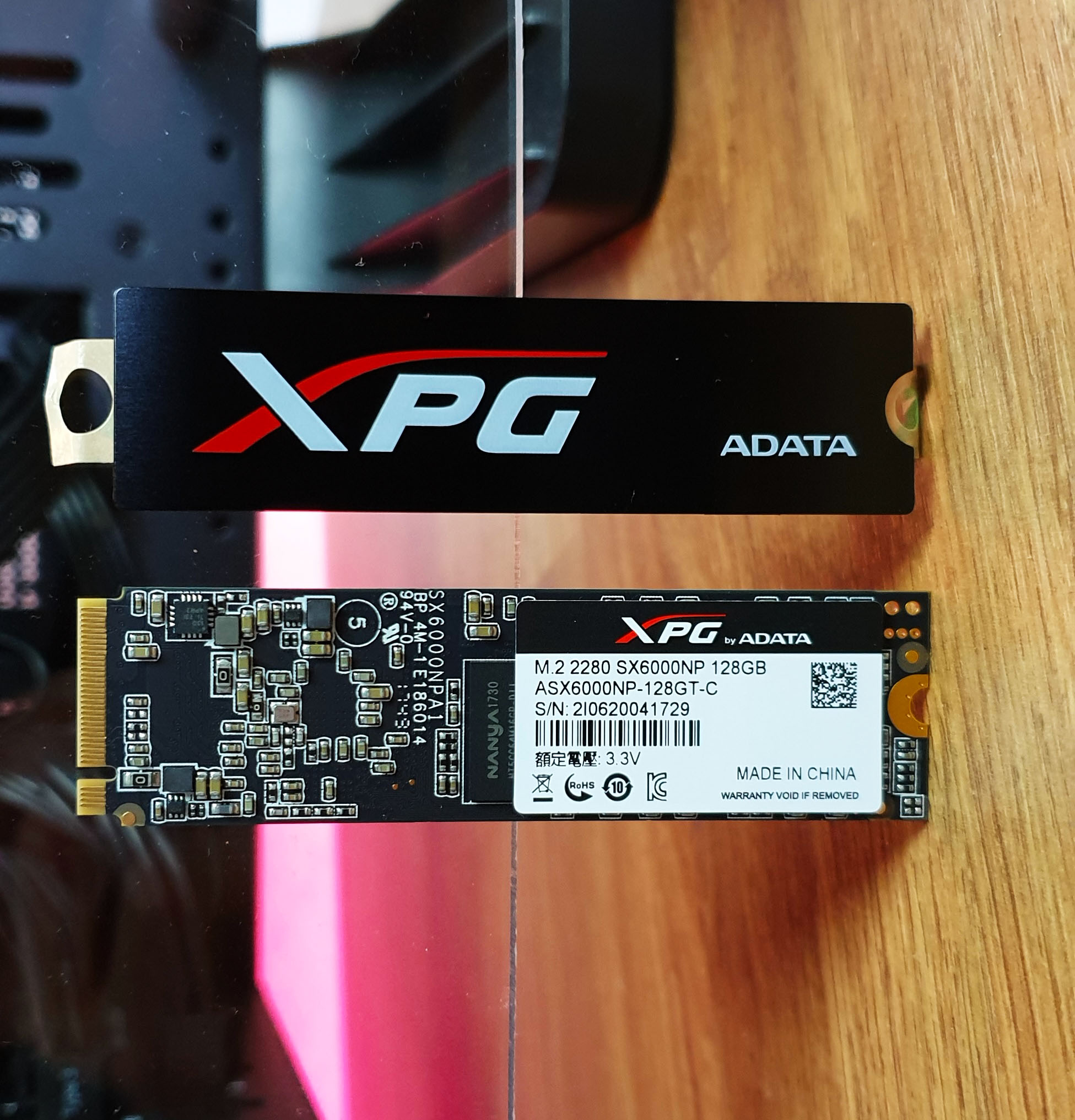 Storage solutions are evolving rapidly and finally we have budget NVMe based drives. Once such example comes from ADATA with their XPG series – the SX6000 with 128 GB. I chose to review this one since is one of the cheapest NVMe M.2 PCIe SSDs you can get right now. So, without any further ado, let’s jump right in.

Xtreme Performance Gear (XPG) was established by ADATA with the aim of providing high-performance products to gamers, esports pros, and tech enthusiasts.

XPG is committed to developing products that help users achieve extreme performance; therefore, it works closely with the gaming and esports community to gather insight into the real needs of users and incorporate it into its hardware. Beyond performance, every XPG product surpasses the rigorous ADATA A+ testing methodology, which ensures the highest standards of stability and reliability. Not only do XPG products sport solid functionality and durability, but they also shine through with sheer cool designs that have earned prestigious international accolades such as Japan’s Good Design Award.

You can grab them from Amazon.com:

The XPG SX6000 combines superior speed and a better cost-performance ratio in a compact M.2 2280 form factor, great for gamers, PC enthusiasts, and video rendering professionals. It’s perfect for anyone feeling the need for speed and thus an upgrade from traditional SATA SSDs. Utilizing a PCIe Gen3x2 interface, the SX6000 reaches read/write speeds of up to 1000/800MB per second for faster boot, game downloads, and data transfers. NVMe 1.2 qualified, the SX6000 delivers superior random read/write performance and multi-tasking capabilities. It implements 3D NAND Flash, which provides storage density up to 1TB and improved reliability compared to 2D NAND. With support for SLC Caching and DRAM Cache Buffer, the SX6000 maintains optimized performance and data integrity during even intense gaming, rendering, or other high demand applications.

OK, from this we point out so far that it is compatible with PCIe 3.0 but only up to 2x bandwidth (instead of 4x than the more expensive counterparts) and it utilities 3D NAND. Even an SLC cache is present along side a DRAM buffer. NVMe protocol is at the current latest version of 1.2. Not bad so far.

As for the complete specs: 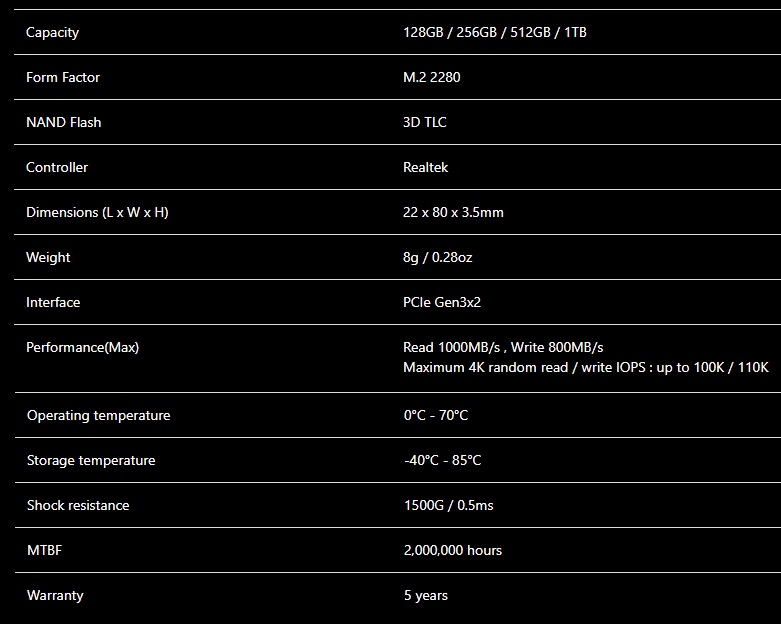 Pretty straight forward. They use TLC cells hence how they can keep the prices so low. Realtek builds the memory controller and performance is rated up to 1000 MB/s read and up to 800 MB/s write. Again because of the 2x bandwidth. Finally, they come with a 5 years warranty.

They come in an all black background box design with a visual depiction of the product in the middle. Furthermore, all the main specs are present for easy identification.

On the back, the most important piece of information is the offered warranty, which is 5 years.

More important information is present on one of the sides. Here we find out that we are getting a heatsink for the drive. Plus technologies like SLC and DRAM caching are integrated as well.

The drive is nested in this transparent plastic tray.

The heatsink is underneath the drive in the tray and this is how it looks. Interesting choice not to come pre-applied.

Maybe to use it in a laptop. But the compatibility would be short even without the heatsink since this is a double sided drive.

Anyway, here it is with the heatsink installed. Looks good plus offers some extra protection.

– Synthetic and real life tests.
– All test subjects have identical content.
– All SSDs were secure-erased before our tests started
– Steps have been taken to ensure that the CPU’s power-saving features don’t interfere with any of our results. All of the CPU’s low-power states have been disabled.
– In order to minimize random variation, each of the real-life performance tests are run a few times with reboots in-between tests to minimize the impact of disk cache.
– SATA SSDs only: Make sure you use a SATA 6Gbps capable motherboard and a matching cable to avoid bottle-necking.Then double check in the BIOS that you have the AHCI mode activated for another maximum performance tip.
– SSDs that use any form of fast cache: We flushed the cache between tests.

Competition and other storage subjects:

To mention that ADATA offers free access to SSD Toolbox (their own software that provides multiple ways for users to obtain disk information, and change settings easily) and to Acronis True Image HD (which is a disk migration utility).

We see the full advertised theoretical number speeds. For a better overall perspective, have a look here for the main sequential read and write with multiple threads and ques when compared to our other test subjects. 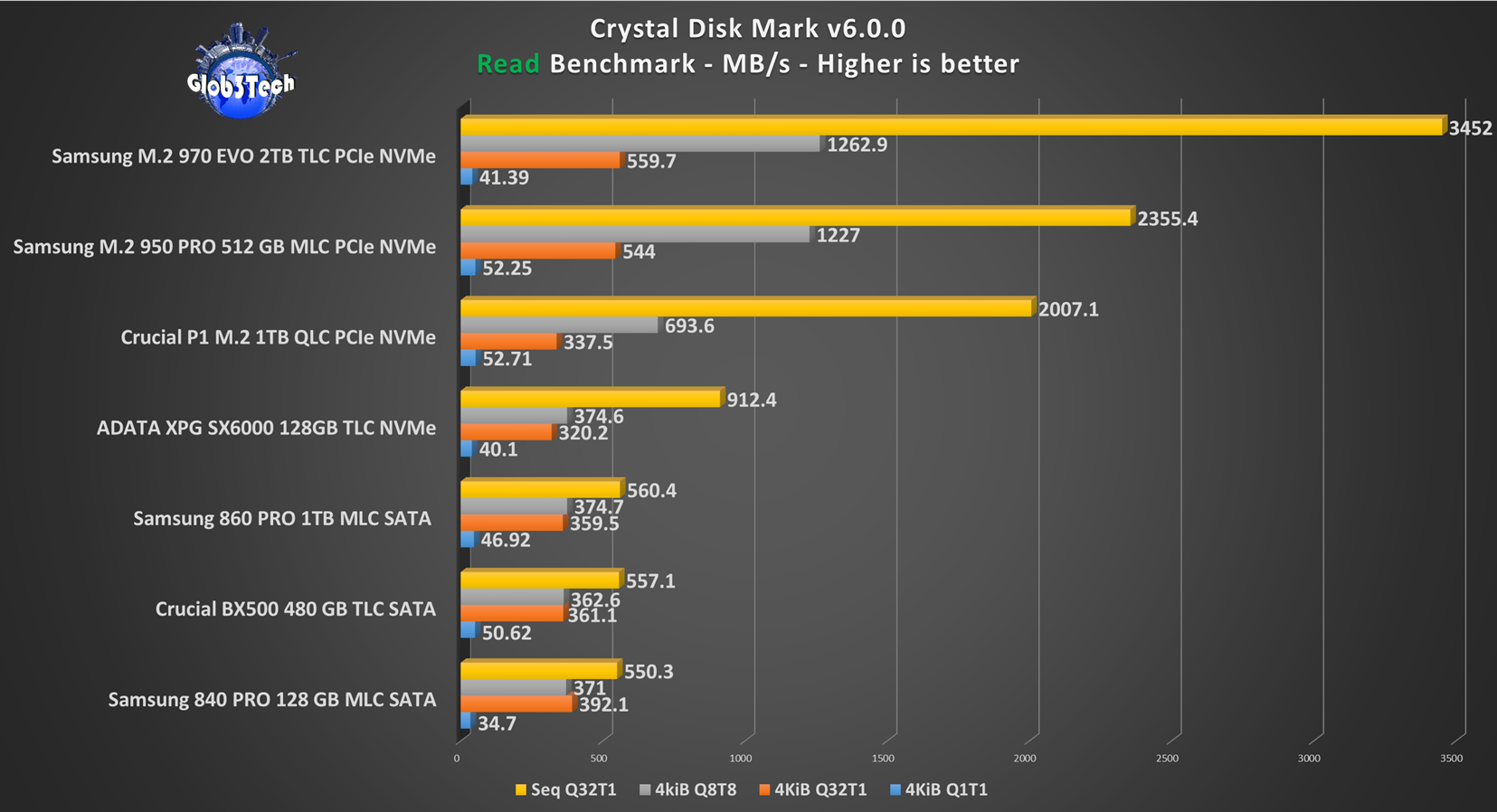 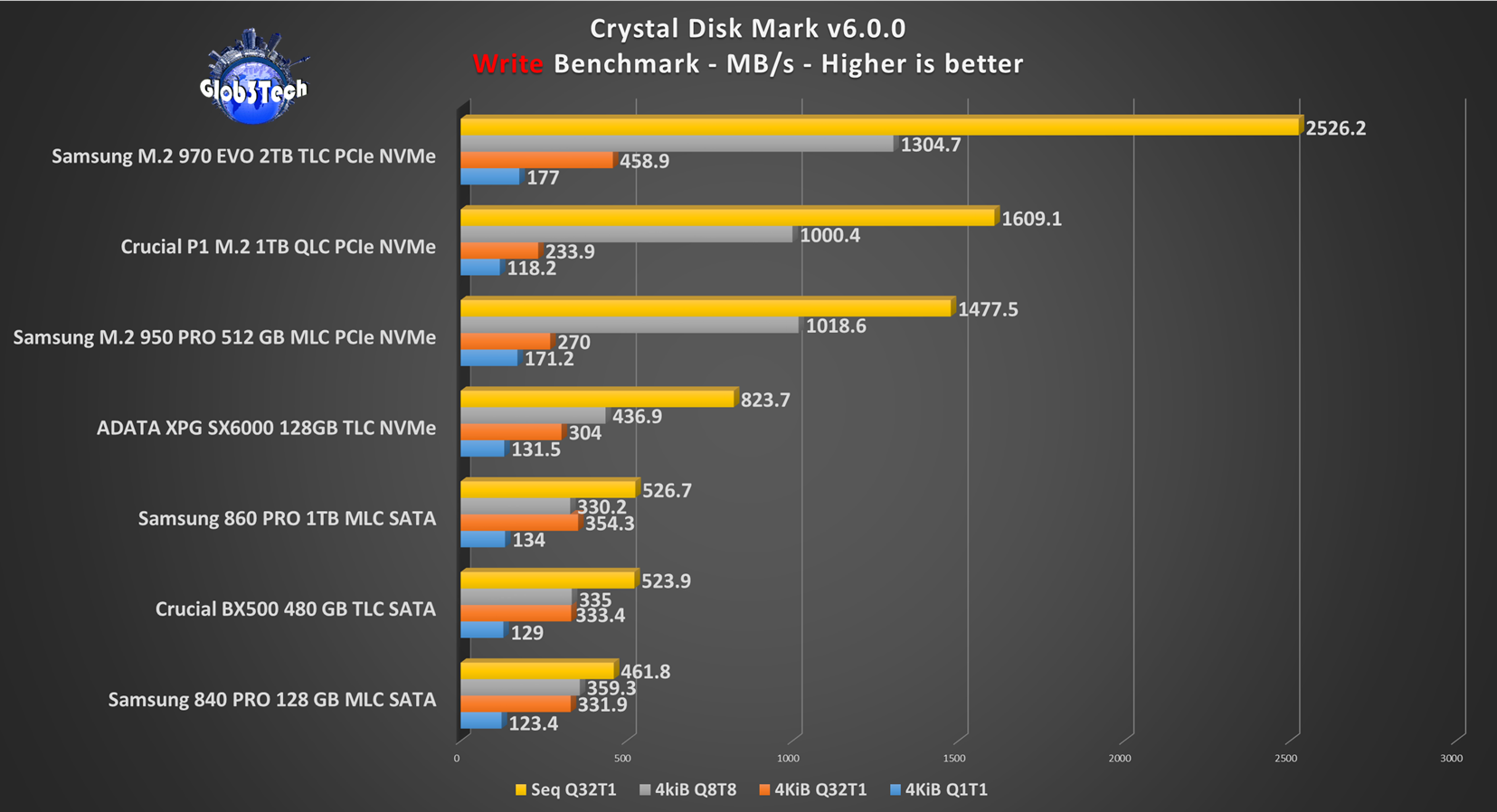 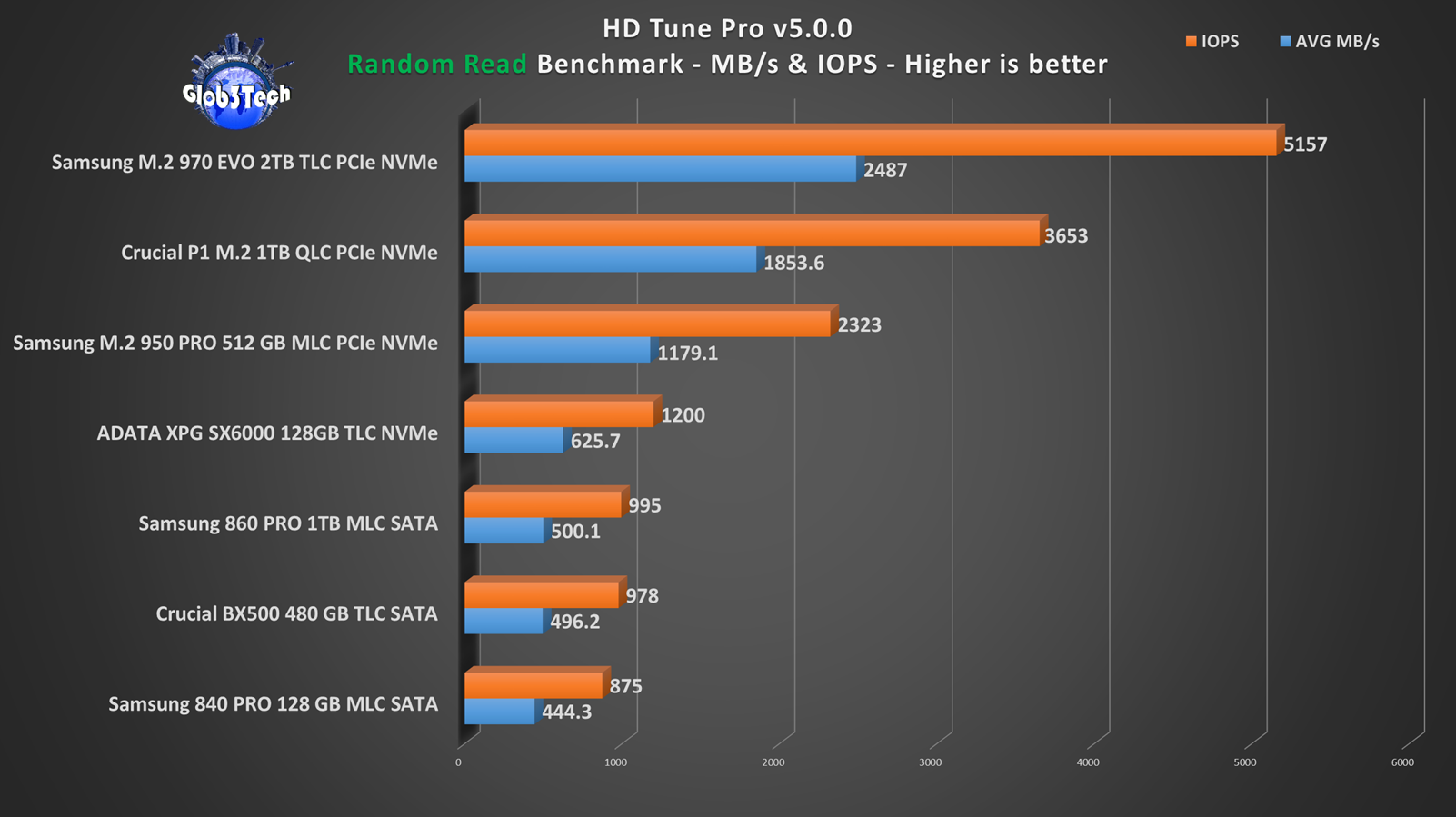 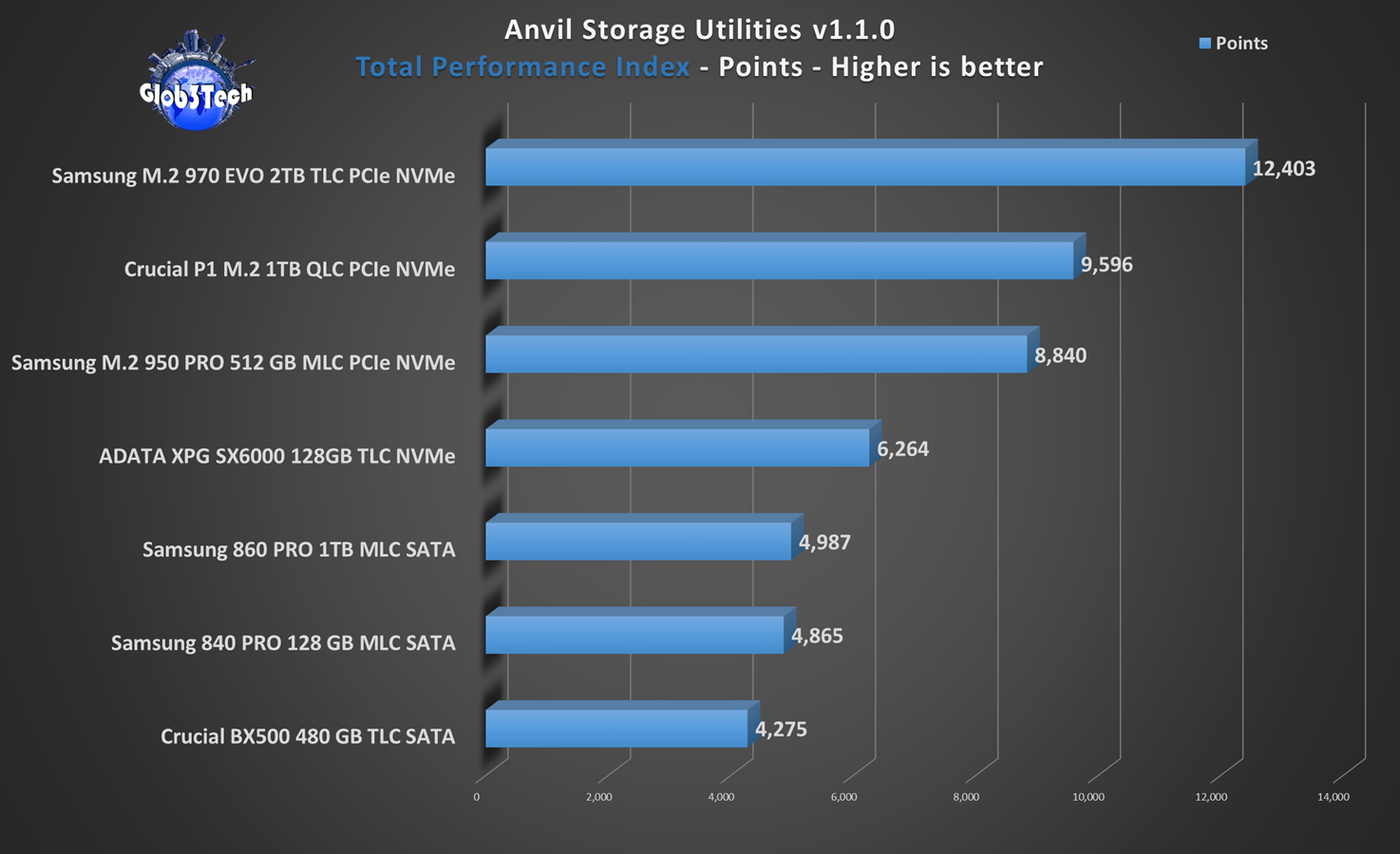 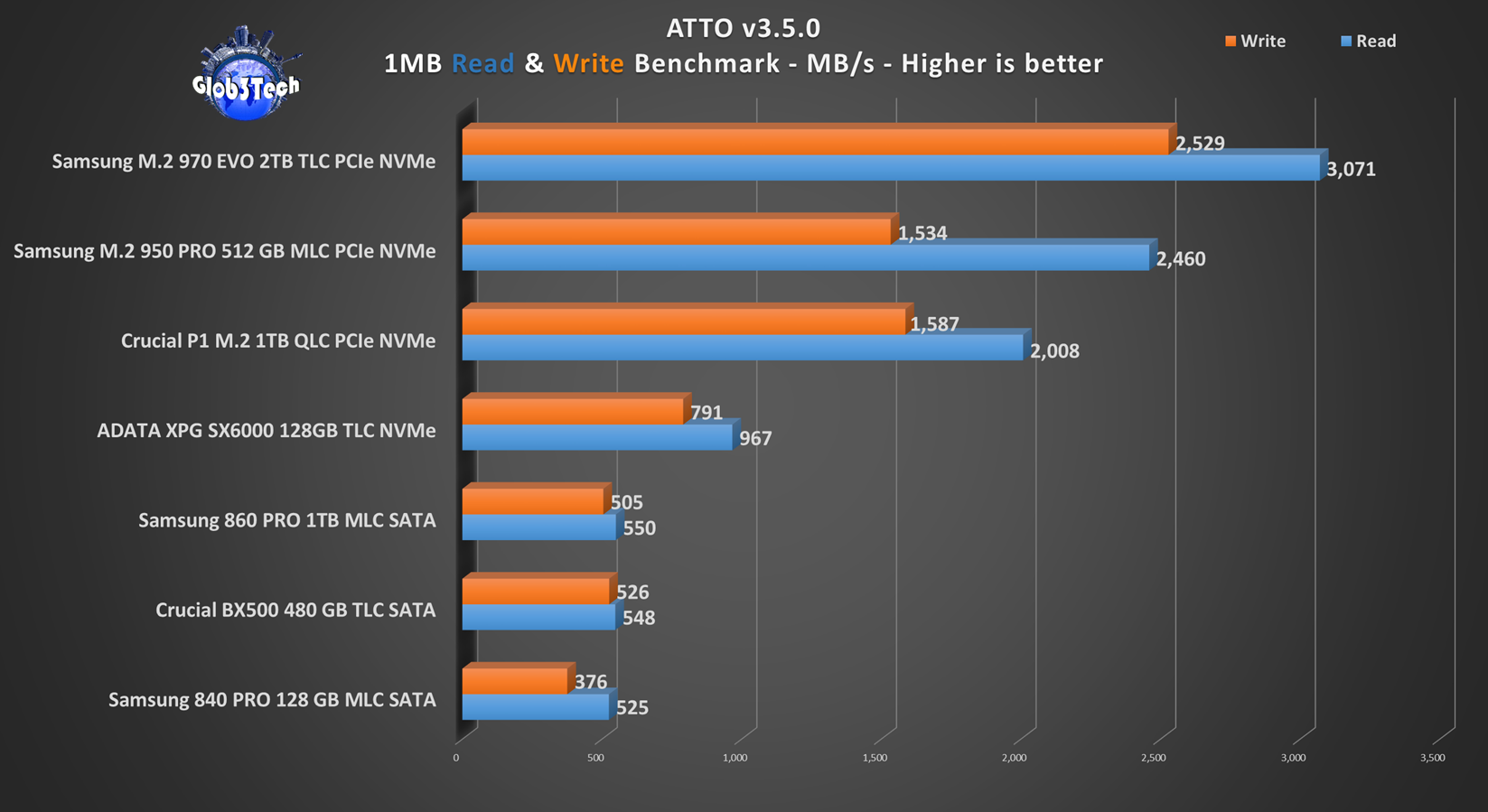 Now for the file transfer tests. Also I have included the temperatures as well for a better perspective. This was a mixed package of 20 GB of random data and .iso kits.

Since I couldn’t find any information of how the big is the SLC cache on this drive, I had to do some ground work to see when the performance dips on a big file transfer – this time I did 60 GB in one go. That will indicate as a quick reference how much this drive can take without loosing its breath. Apparently to my calculations this is roughly around the 20 to 25 GB mark. 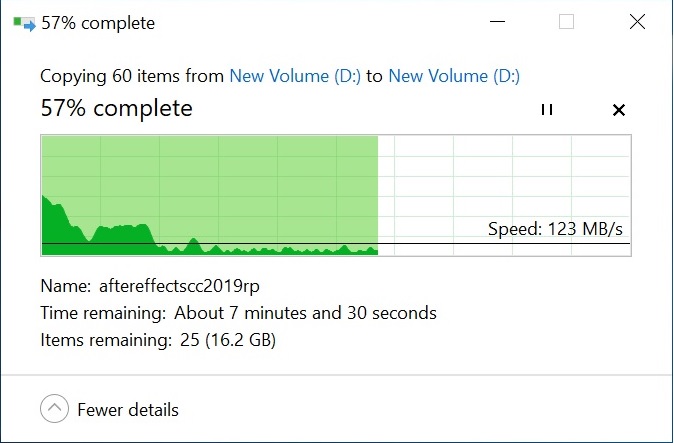 As far as it goes for synthetics, they all suggest exact what the manufacturer claimed. The x2 bandwidth makes the XPG SX6000 128GB NVMe drive to always be one step behind the Crucial P1 and the Samsung 950; since those are x4.

Temperature wise, we saw really good numbers – I mean under 50 degrees C under heavy file transfer load with no air flow on them, with a room temperature set at 17 degrees C, that is pretty good in my book. A lot of Amazon users are reporting overheating problems with this drive. In my case, no such problem at all. I mean I did the ‘old school’ method and stick my finger on it during file transfer and it wasn’t that hot at all. So that’s that.

Real life heavy file transfer under the SLC protection of course, the drive average almost at 400 MB/s which is good. When the SLC cache fills up, well, we all know that story. A normal behavior, but give the drive’s price, this is not such a big deal.

Well then, this budget NVMe drive has almost all of the latest specs and technologies, minus the full 4x bandwidth and despite that, it still delivered a good overall performance. I mean for $50/£35 this is a steal of a value ! I witnessed no overheating problems under full usage, comes with a heatsink and it performed as intended. This is a perfect solution for new users that want to make the transition to the NVMe world. Hence it gets our “Must Have” award !

– Only 2x bandwidth available
– Not known the SLC cache size