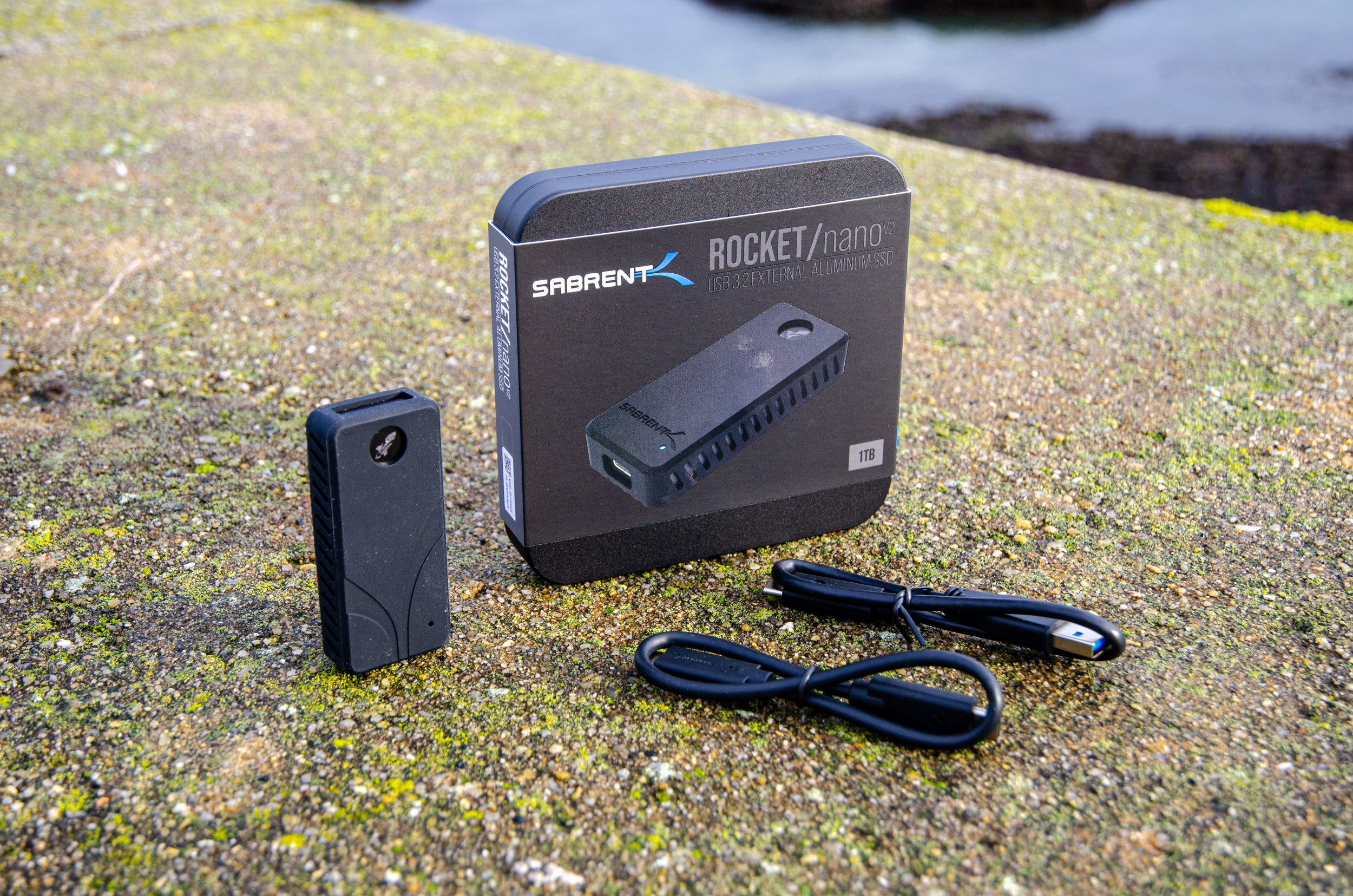 Both Intel and AMD have recently released plenty of new hardware which include the newer and ludicrously fast protocols like PCI-E Gen 5.0 and USB4. But these are available on the top tier motherboards and we still have to catch up on the mainstream platforms with the extremely confusing USB 20 Gbps ports (USB 3.2 Gen2x2) which were the maximum available for external drives, besides Thunderbolt.

Thus today we are looking at Sabrent‘s newest 20Gbps external enclosure, the Rocket Nano V2, the follow up to the previous Nano series.

The Sabrent Rocket Nano V2 line-up consist of 3 different size options to choose from, with models from 1TB, 2TB and 4TB. Our test sample retails for $119.99 on Amazon.com which is great value for money considering its specs. 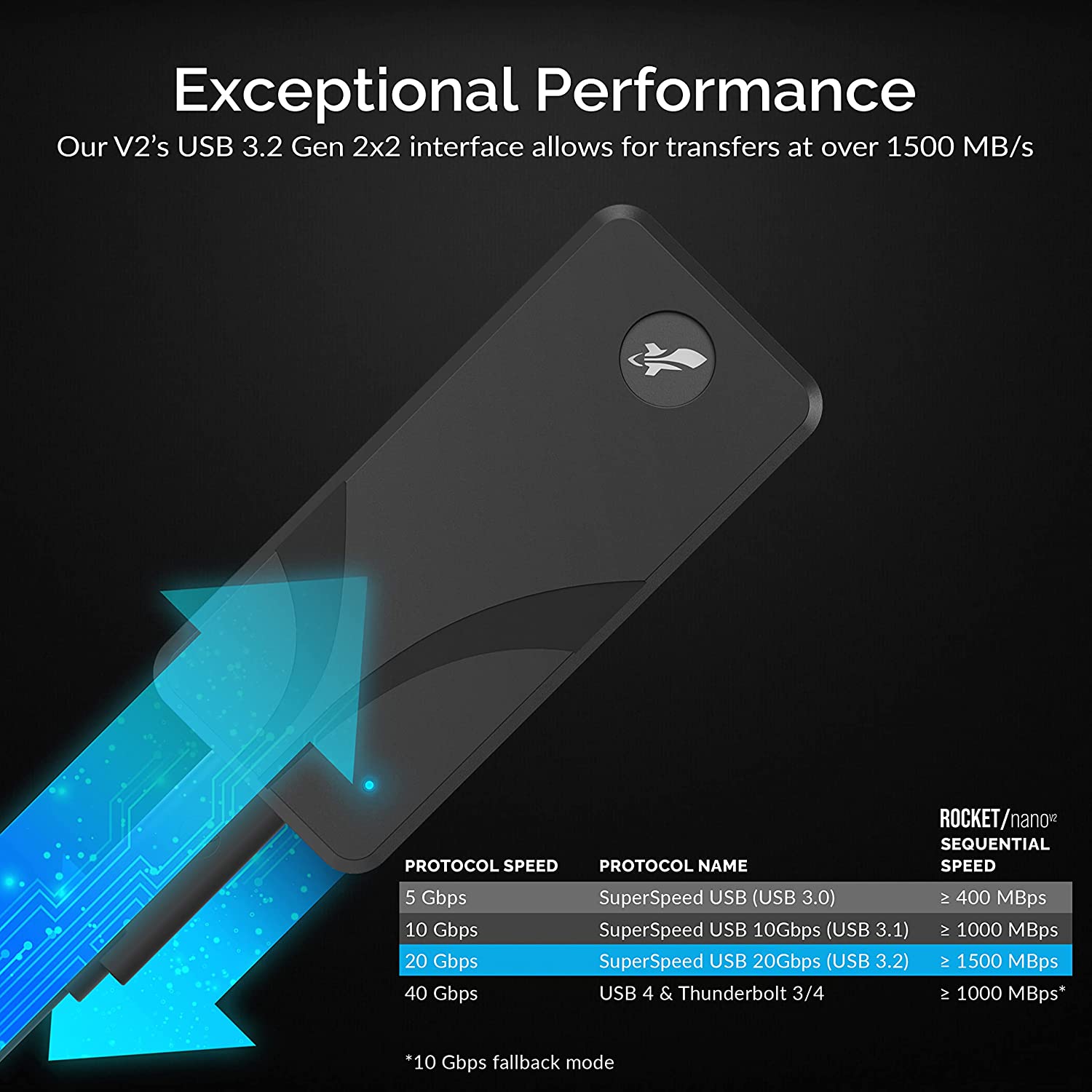 * Burst transfers over 1500 MB/s with sustained performance capable of smooth 8K video recording.
* Transfers over USB 3.2 Gen 2×2 interface for maximum speed.
* Constructed of aluminum with an external silicone sleeve for ruggedness in all conditions.
* Lightweight and portable.
* High-endurance flash and wear management.
* Includes both Type-C to Type-A and Type-C to Type-C cables for flexibility.
* Compatible with a wide range of devices with USB backward compatibility.
* The native UFD controller additionally assures minimal compatibility issues.

Sabrent’s customary metal enclosure for all of their storage devices, is also present here. It even matches the SSD inside with its darker theme. Thus branding is excellent and all of the most important specs are easily visible on both sides. 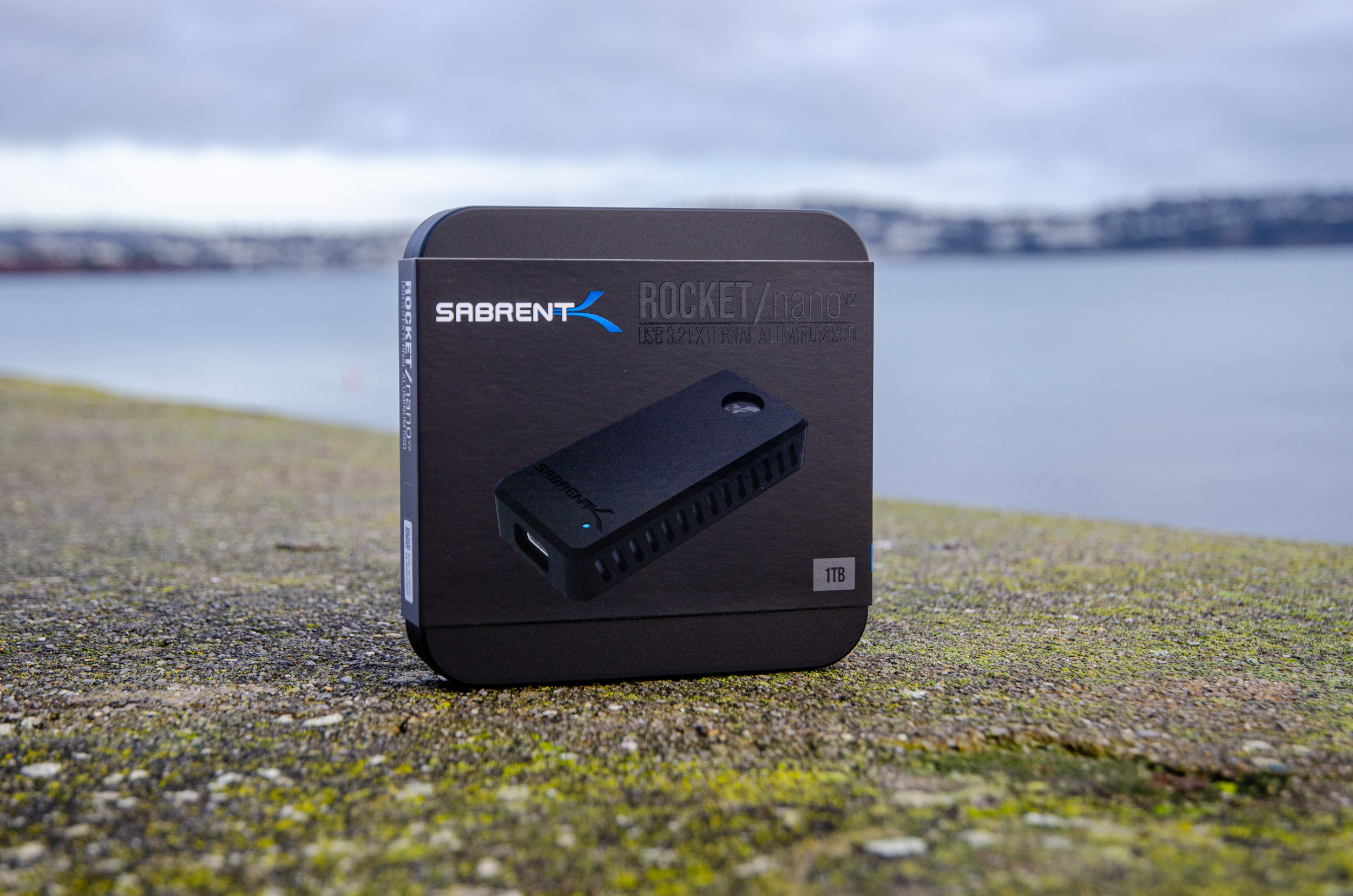 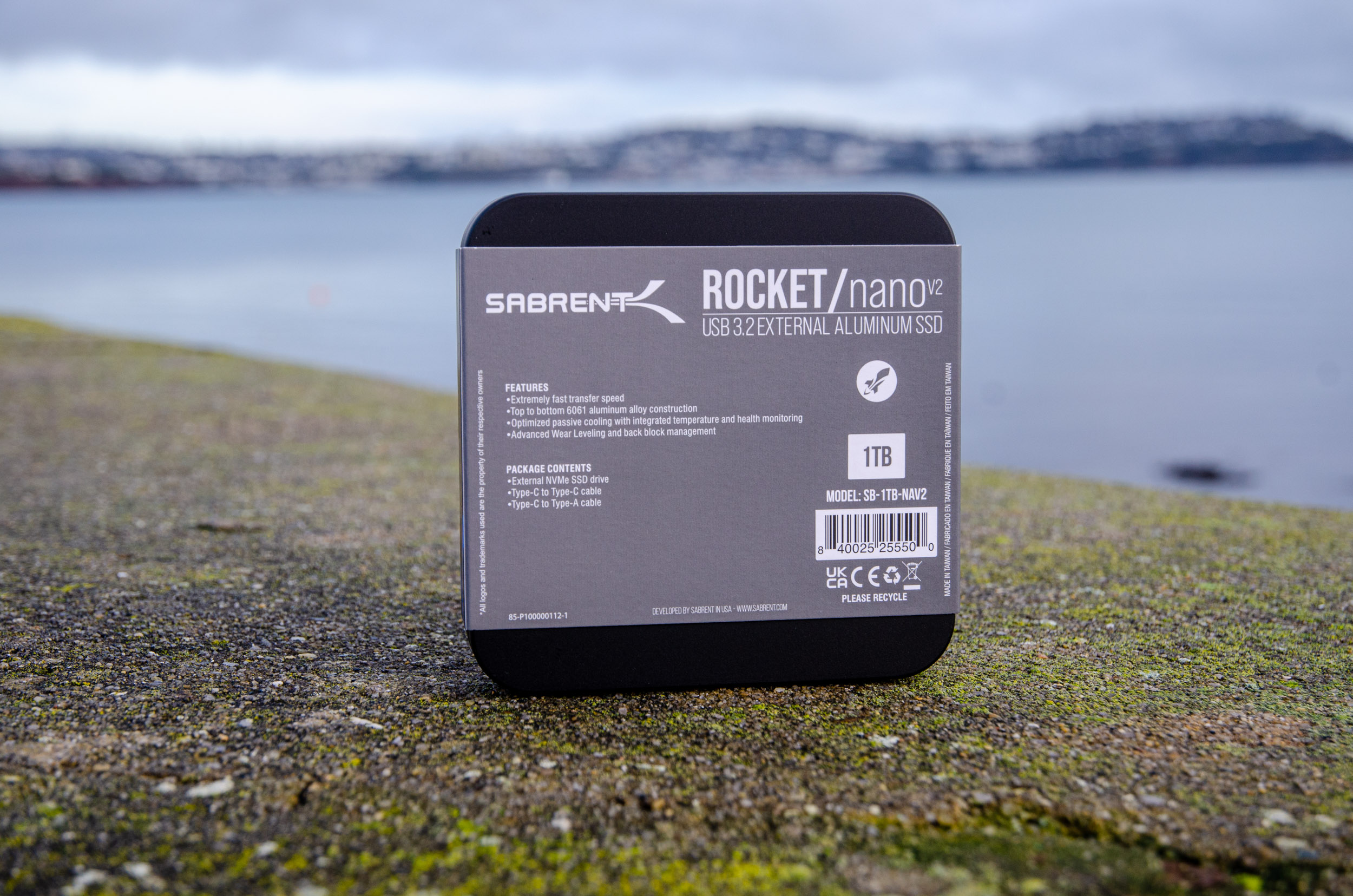 Remove the outer sleeve to access the case. The cables reside in their own section while the Rocket Nano V2 external SSD is proudly presented in its foam padding. 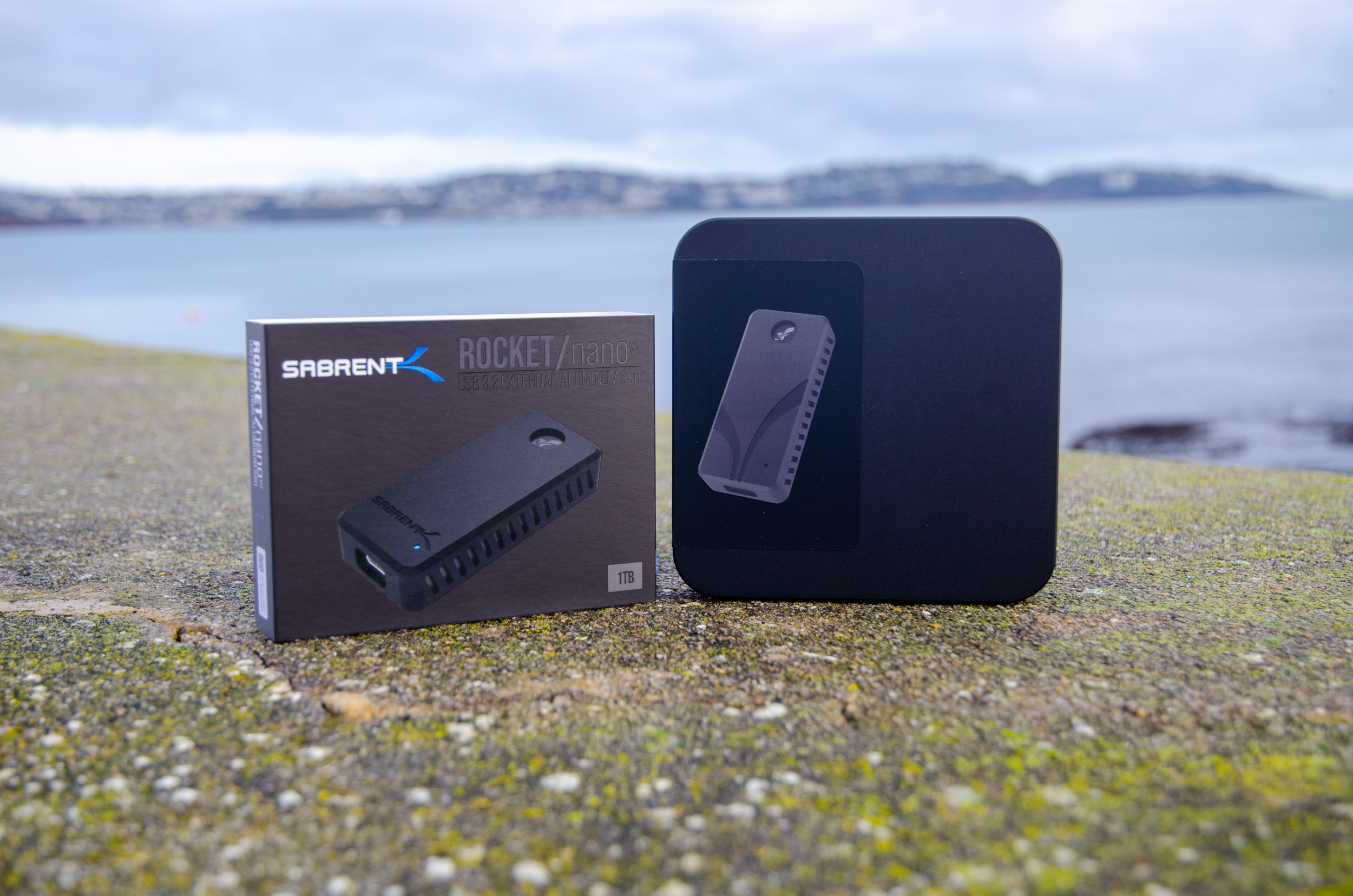 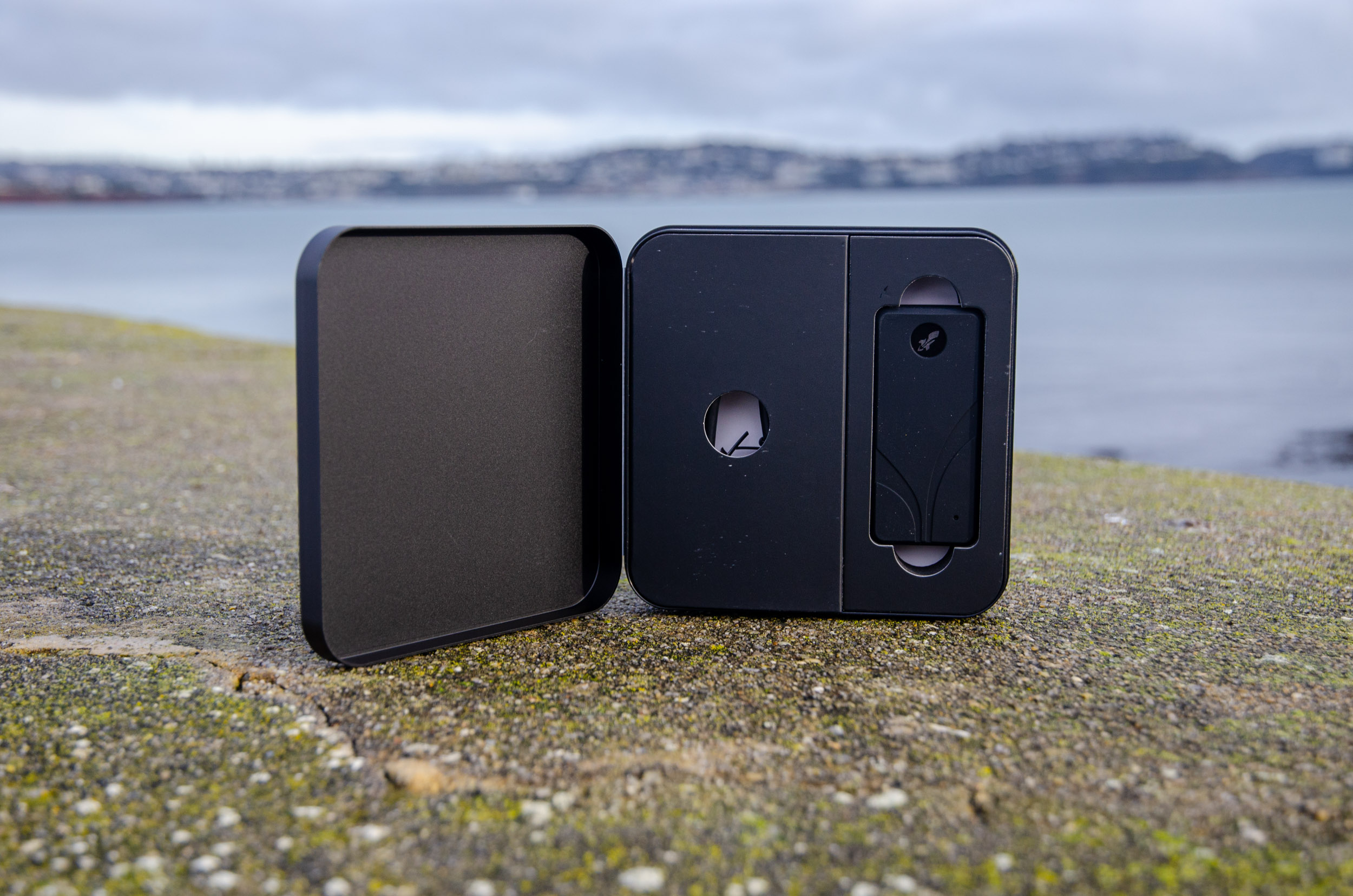 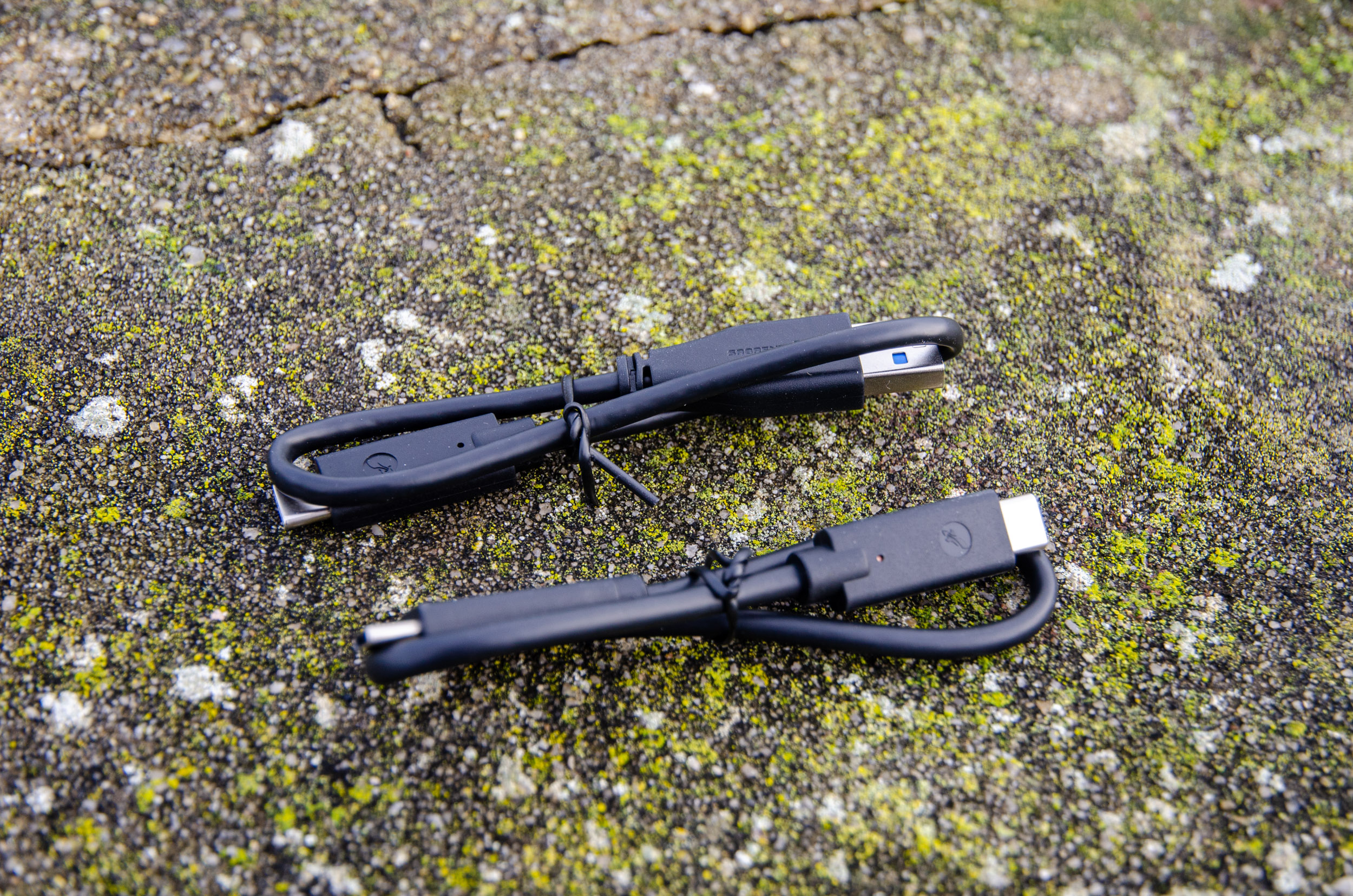 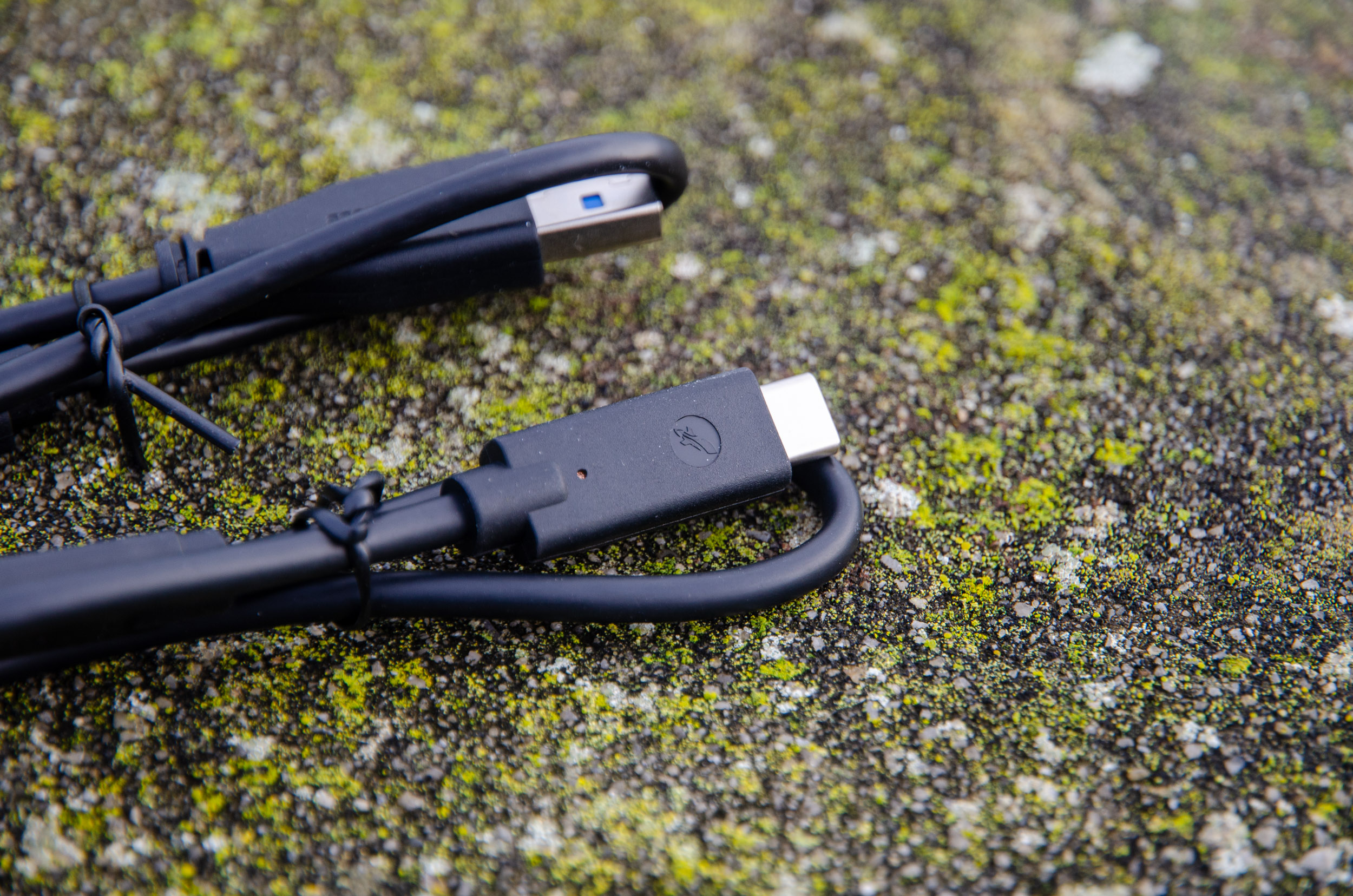 The Rocket Nano V2 external SSD come with this protective silicone outer case, that has plenty of cut-outs on all sides. That small front one is for the activity LED, for example. 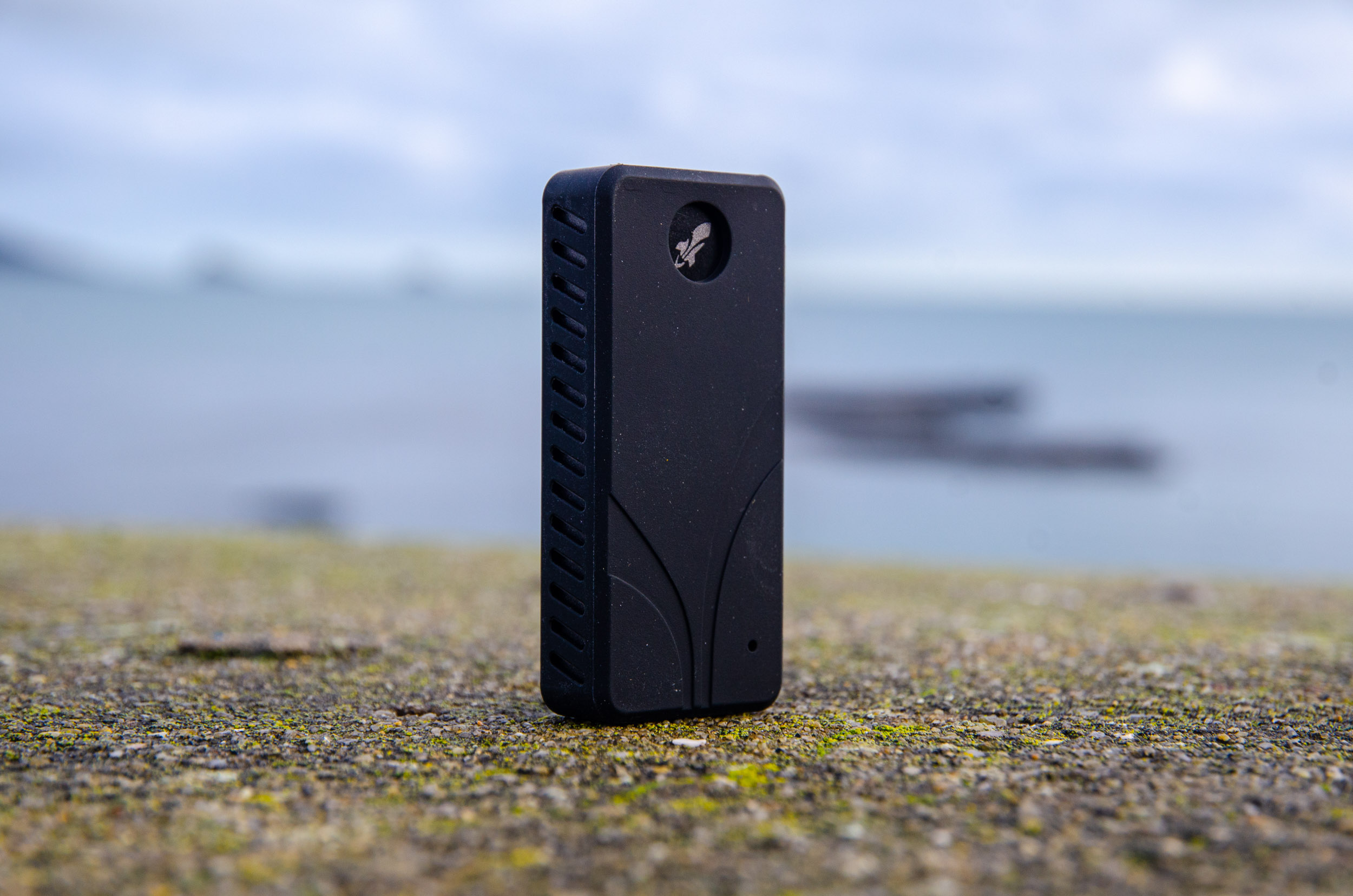 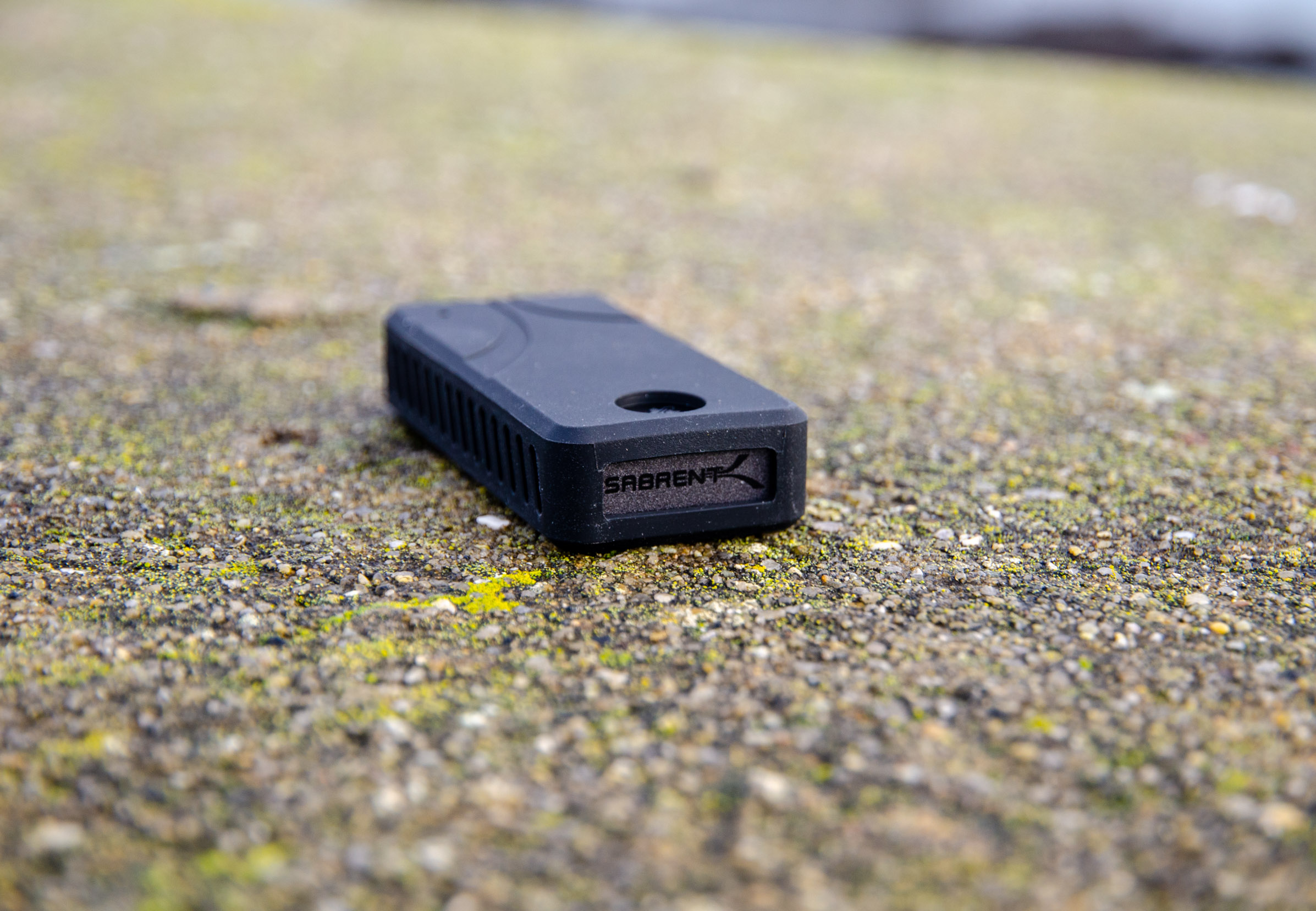 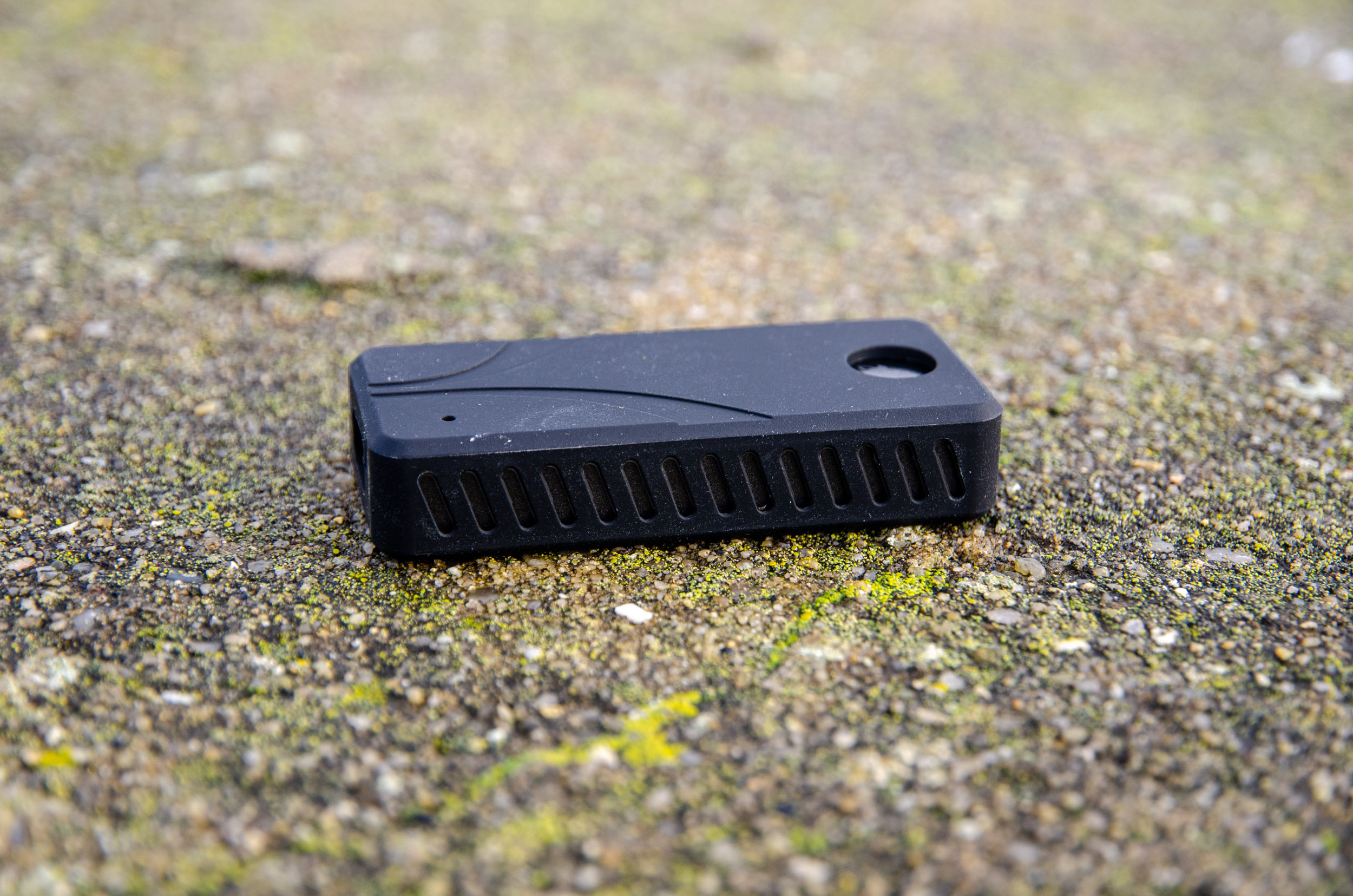 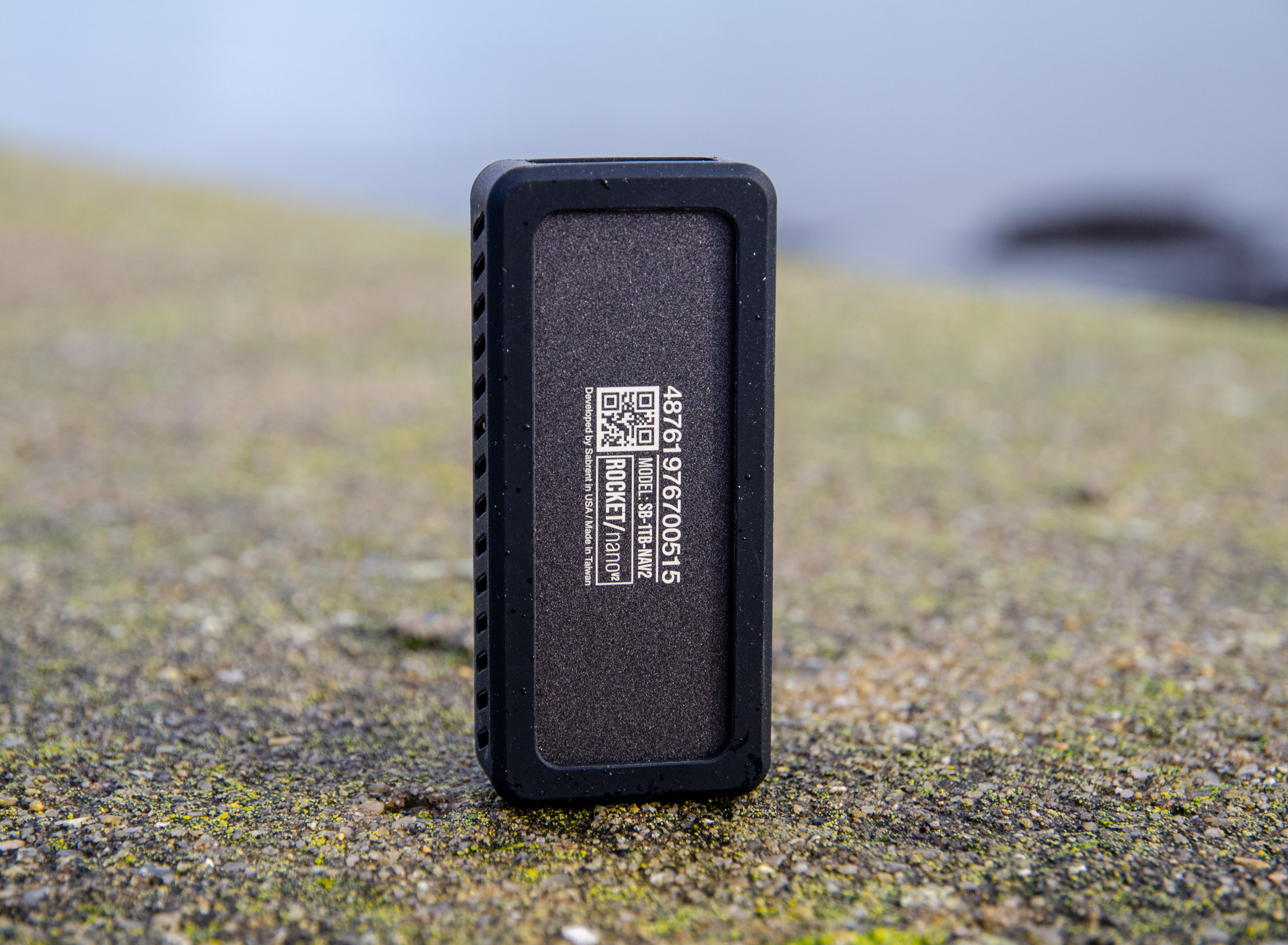 This is the Type-C USB port that will offer you up to 20 Gbps if you have a free USB 3.2 Gen2x2 port. This is achieved thanks to the custom inner NVMe M.2 2280 SSD platform. A Phison PS2251-18 U18 controller takes care of the communication to the 128-layer SK Hynix V6 TLC NAND cells. Unfortunately the port is not protected to the elements. 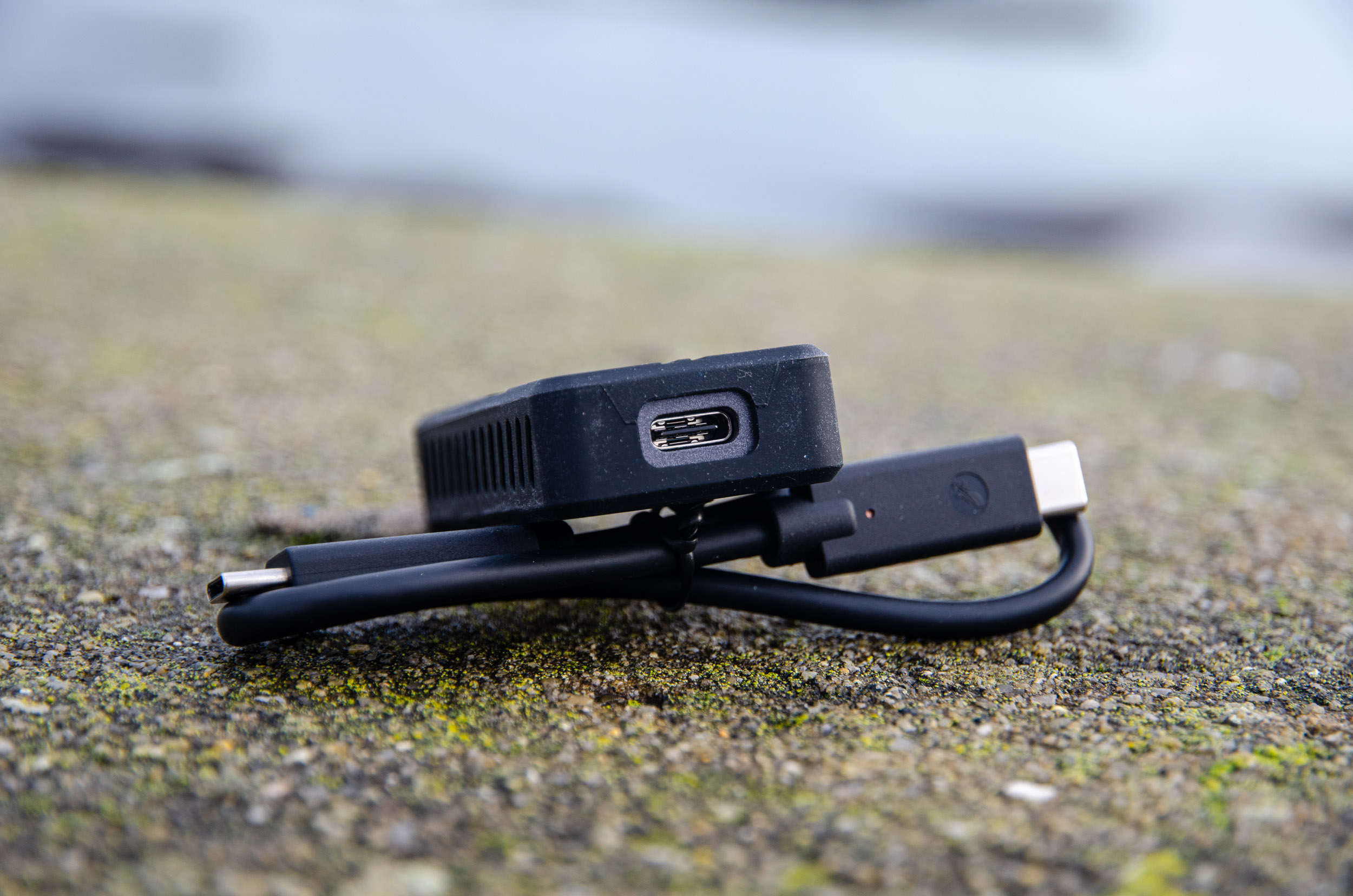 This drive is extremely small and compact even with its protective sleeve on.

As you can see this even matches the drive’s front design elements. Furthermore, the Rocket Nano V2’s case is made from high quality aluminium. 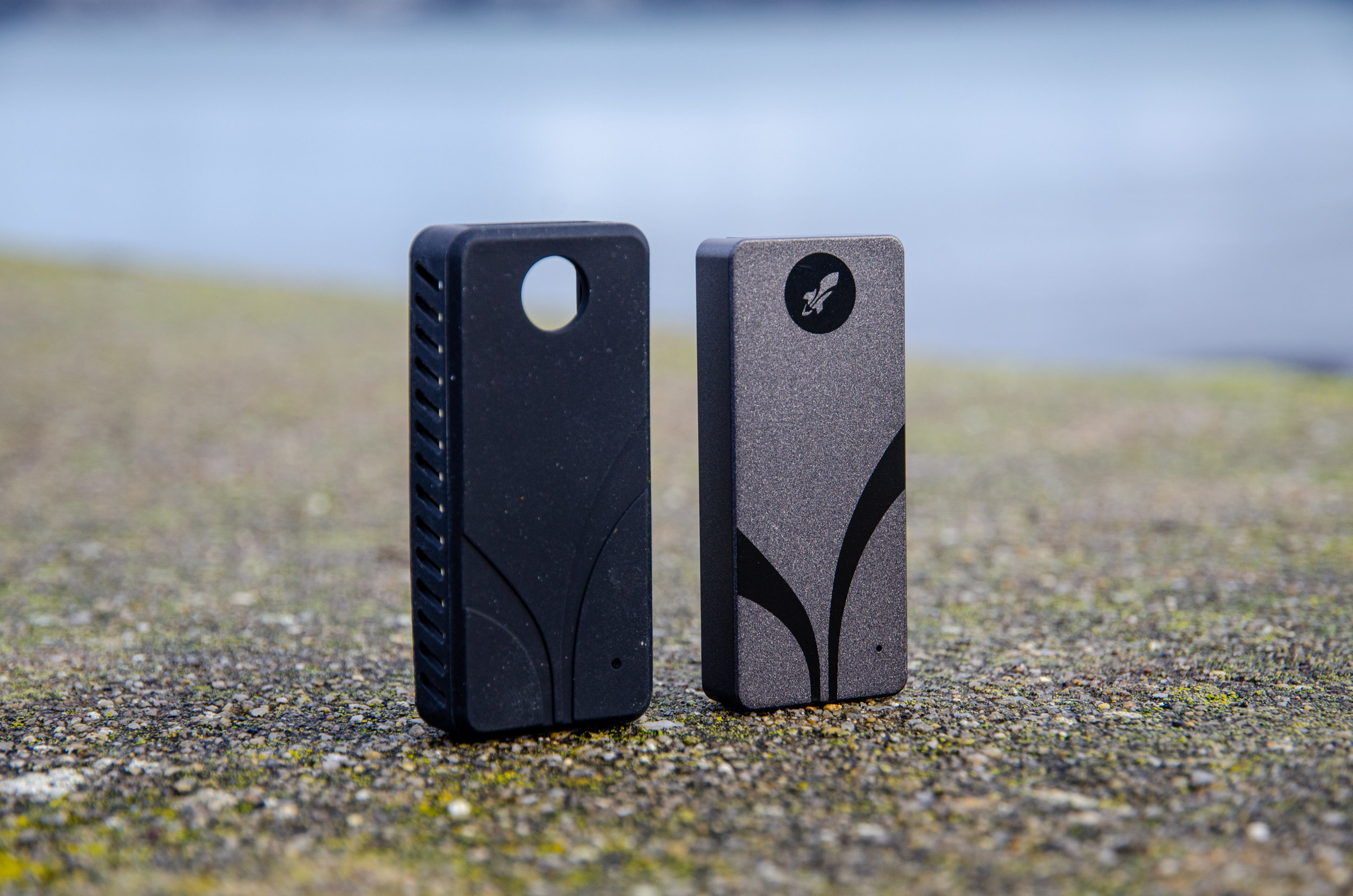 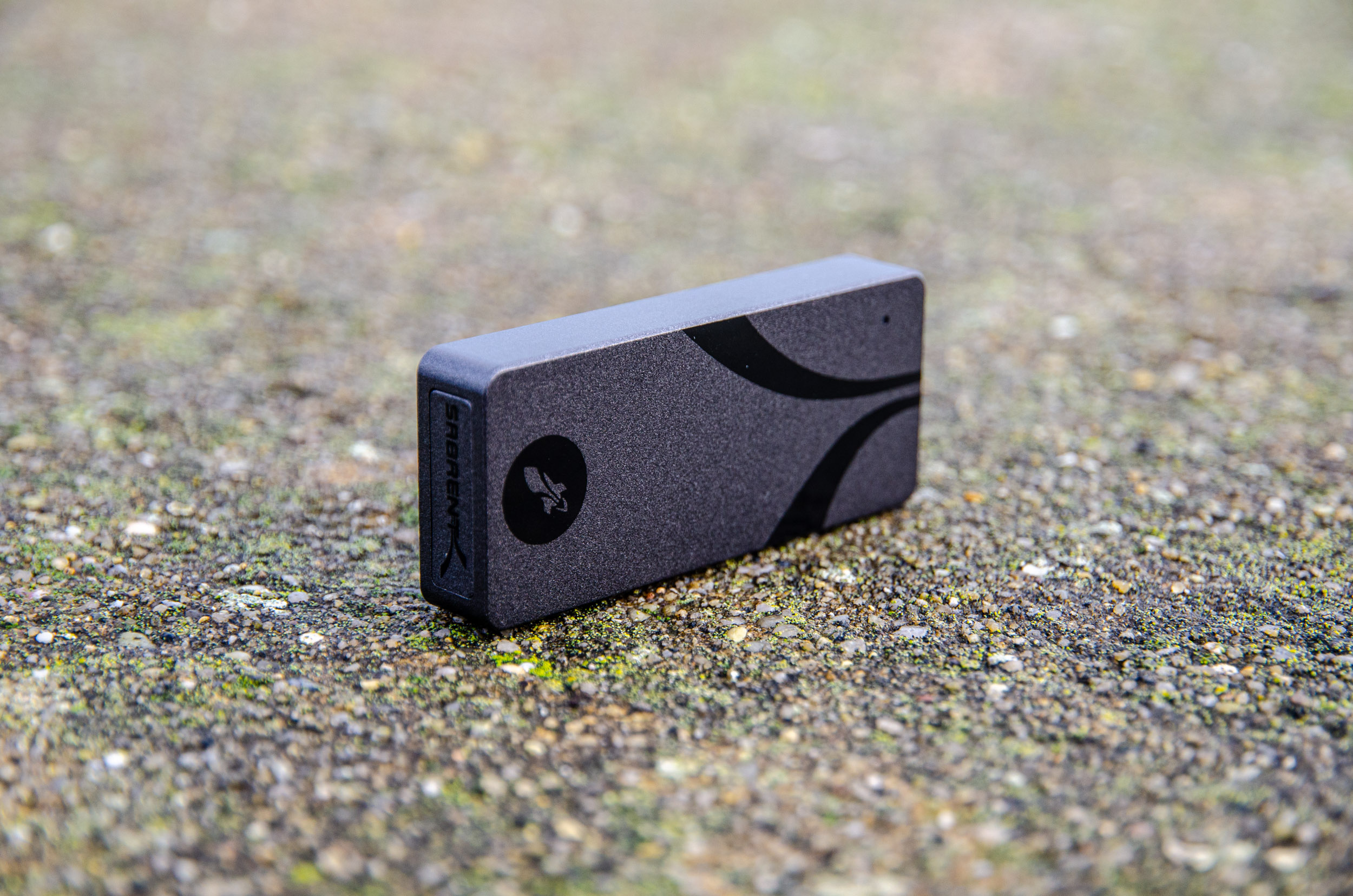 Let’s get indoors and test it out. 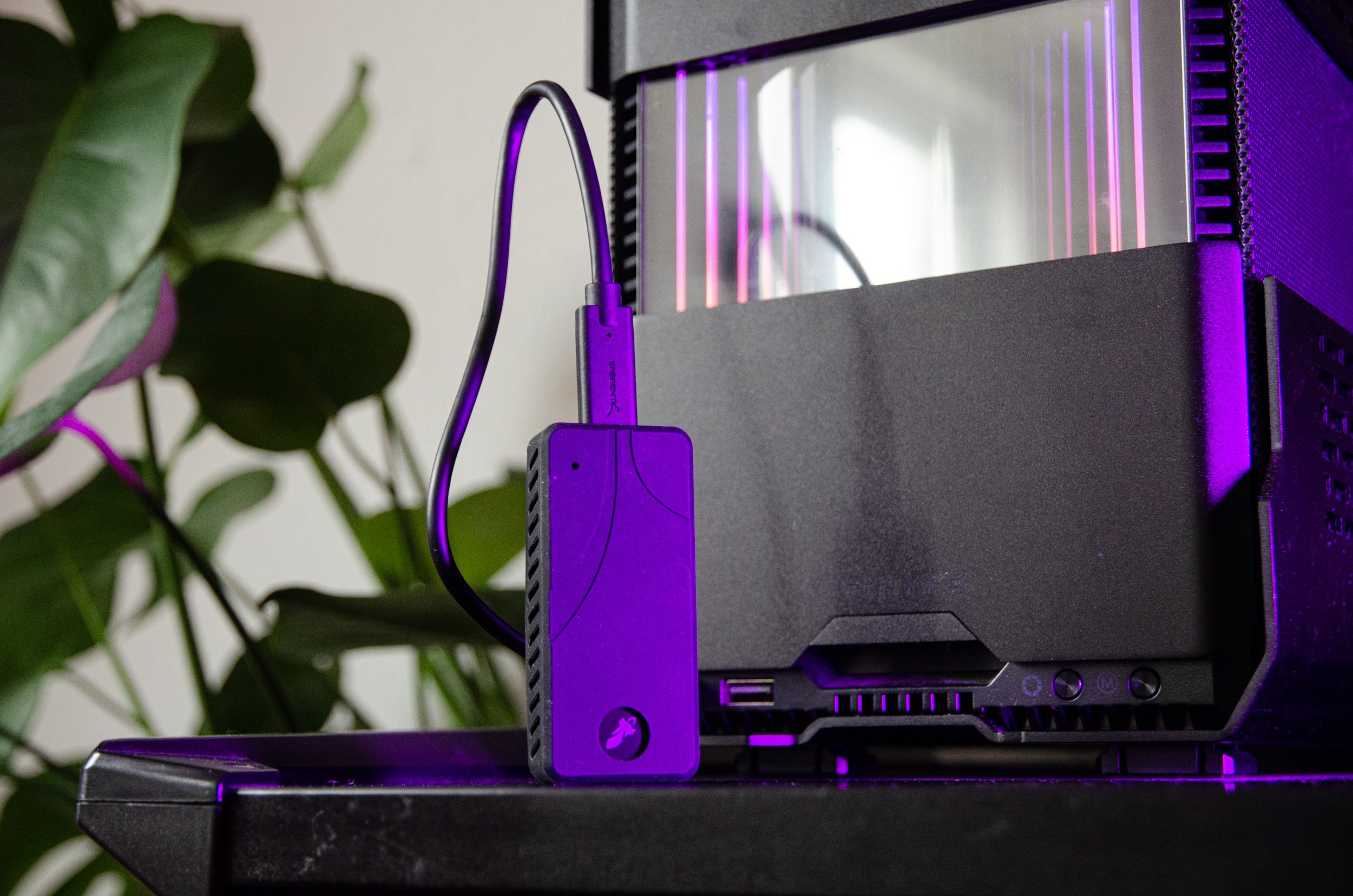 The activity white LED will flash when the drives is being used, otherwise it will be off.

* The external Sabrent Nano V2 SSD was connected to the native USB 3.2 Gen2 Type-C port of the ASUS B550-I STRIX motherboard which is capped at 10Gbps (up to 1250 MB/s) and to properly test the 20 Gbps output, you require a PCI-E x4 adapter (which we used on our secondary test machine) if your motherboard doesn’t have the full Gen2x2 port.
* Synthetic and real life big file transfer tests – a game folder of 119GB of mixed files and a single 5.4GB .mkv video file to test the burst speed and the SLC cache if present.
* All SSDs were secure-erased before our tests started
* Between tests, drives are left idle for 1 minute to allow them to flush and reorganise their internal data.
* Steps have been taken to ensure that the CPU’s power-saving features don’t interfere with any of our results. All of the CPU’s low-power states have been disabled.
* In order to minimise random variation, each of the real-life performance tests are run a few times with reboots in-between tests to reduce the impact of disk cache.
* (SATA SSDs only) Make sure you use a SATA 6Gbps capable motherboard and a matching cable to avoid bottle-necking. Then double check in the BIOS that you have the AHCI mode activated for another maximum performance tip.
* For the Gen4 x4 M.2s, you have to make sure you have a compatible motherboard that accepts and delivers the new bandwidth. Otherwise, it will work only in Gen3 x4 mode.
* For AMD users, make sure you update your motherboard chipset drivers from here. 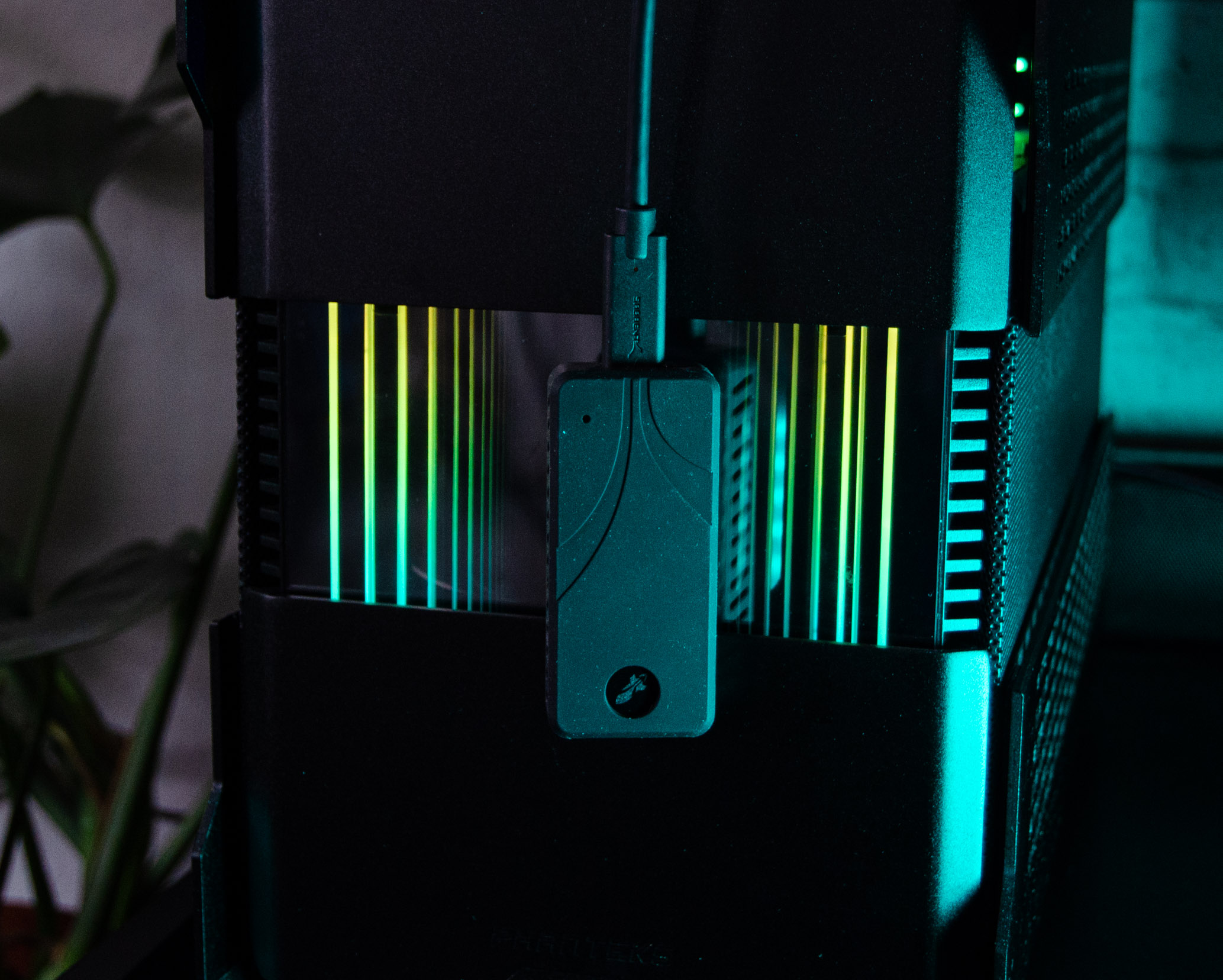 HD Tune Pro – which is a hard disk / SSD utility with many functions. It can be used to measure the drive’s performance, scan for errors, check the health status (S.M.A.R.T.), securely erase all data and much more. These results are on the 10 Gbps port and thus the results will reflect this in all of the upcoming tests. 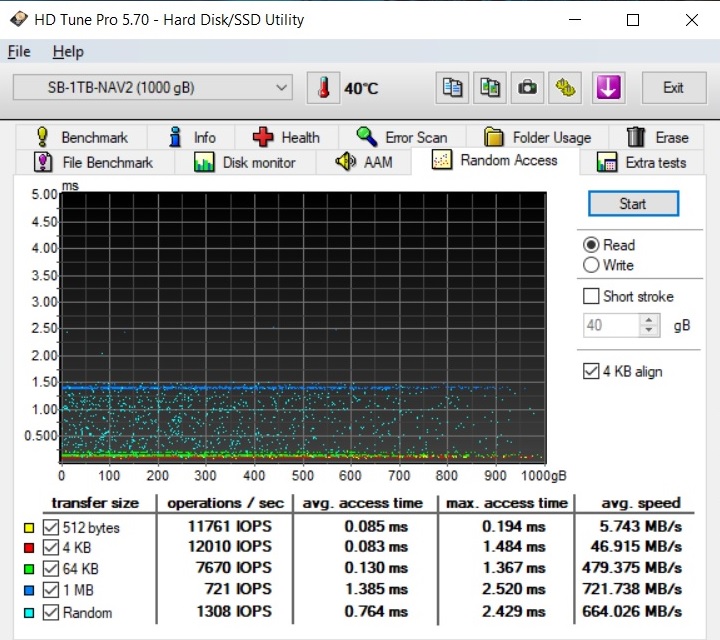 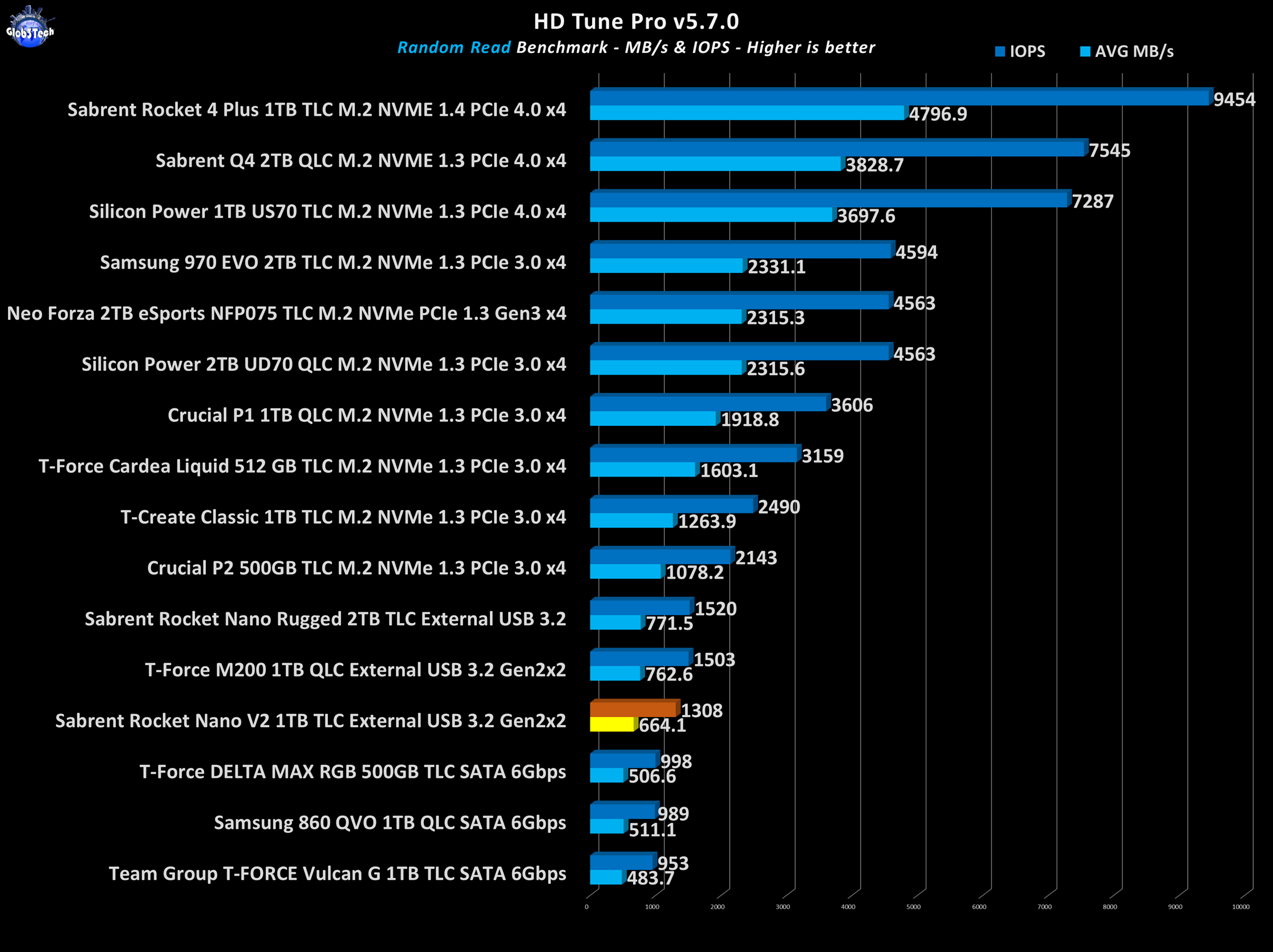 Moving to the next utility – Crystal Disk Mark – this one is designed to quickly test the performance of the drives. These charts also include the tests with the PCI-E x4 adapter card. 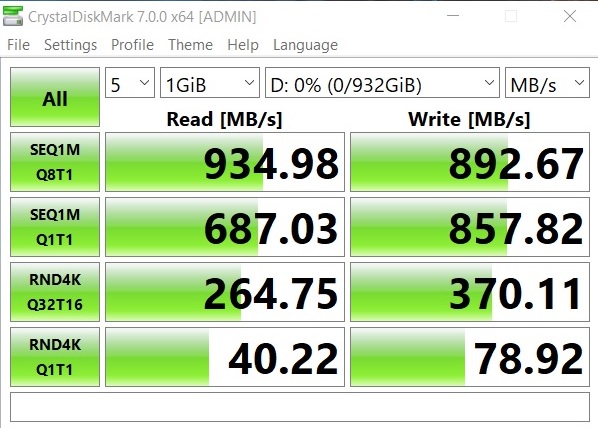 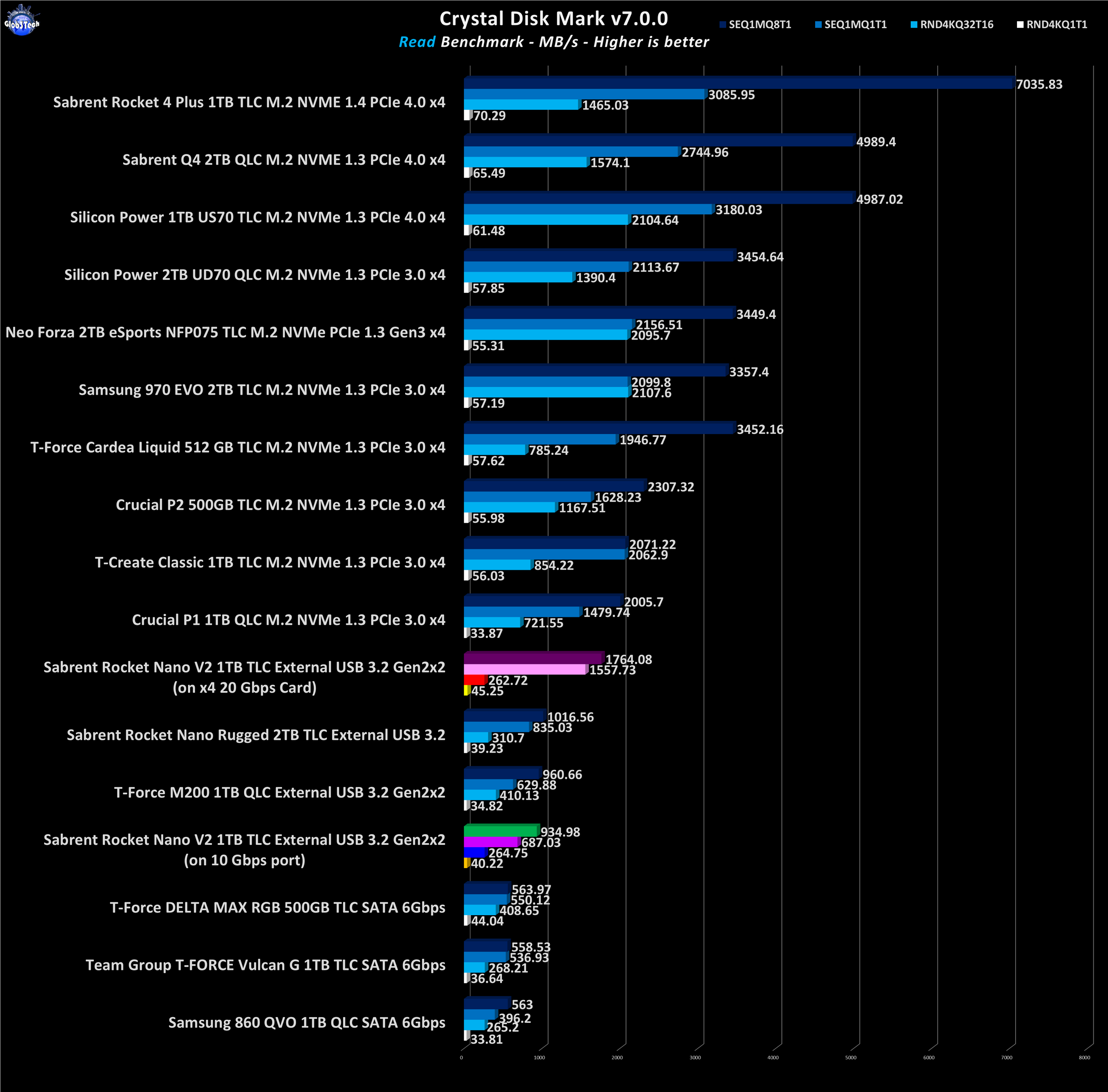 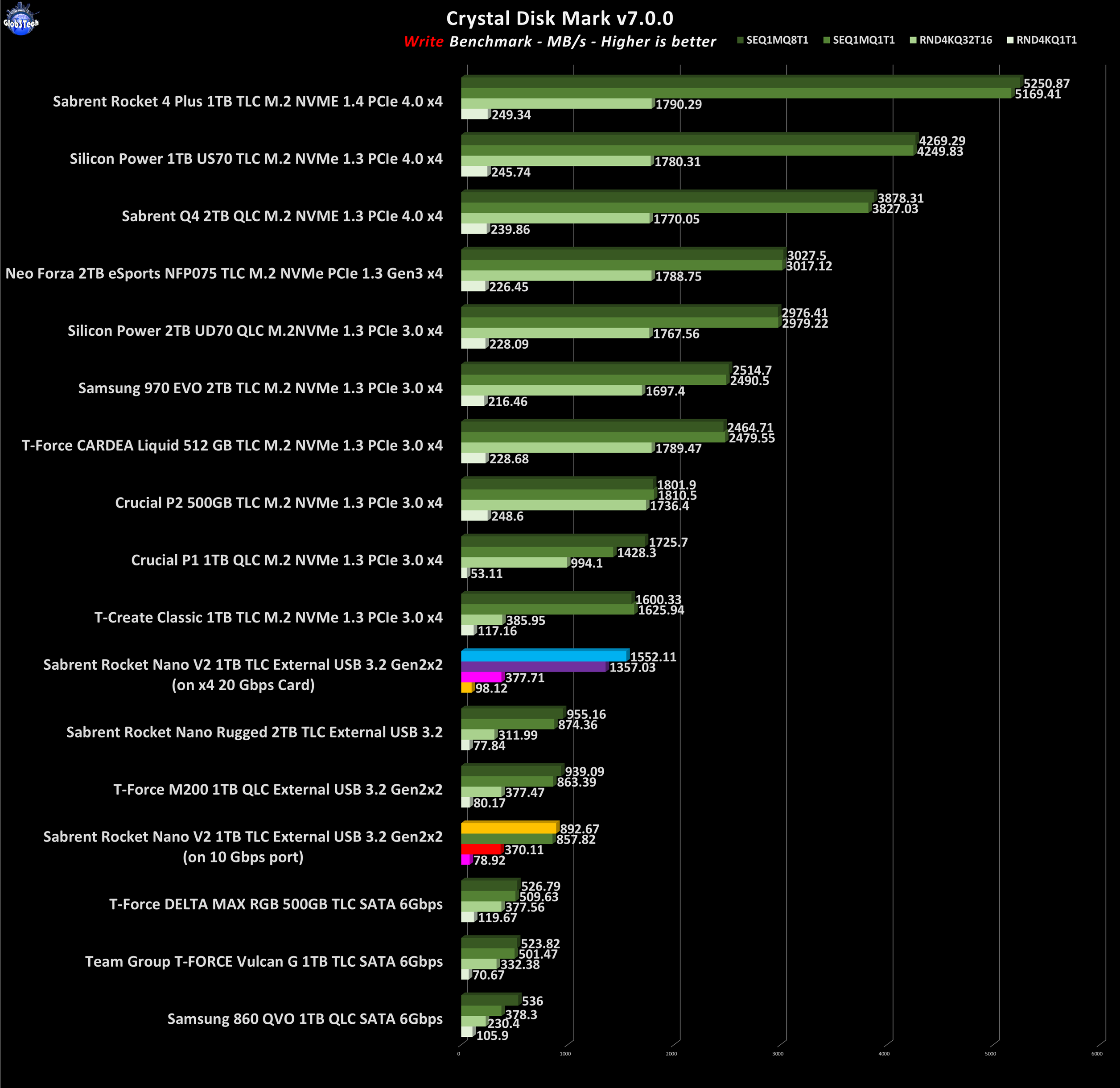 To conclude the synthetic tests, here is ATTO which is another performance measurement tool to test any manufacturers RAID controllers, storage controllers, host bus adaptors (HBAs), hard drives and SSD drives. This one just reconfirms the numbers from the previous test. 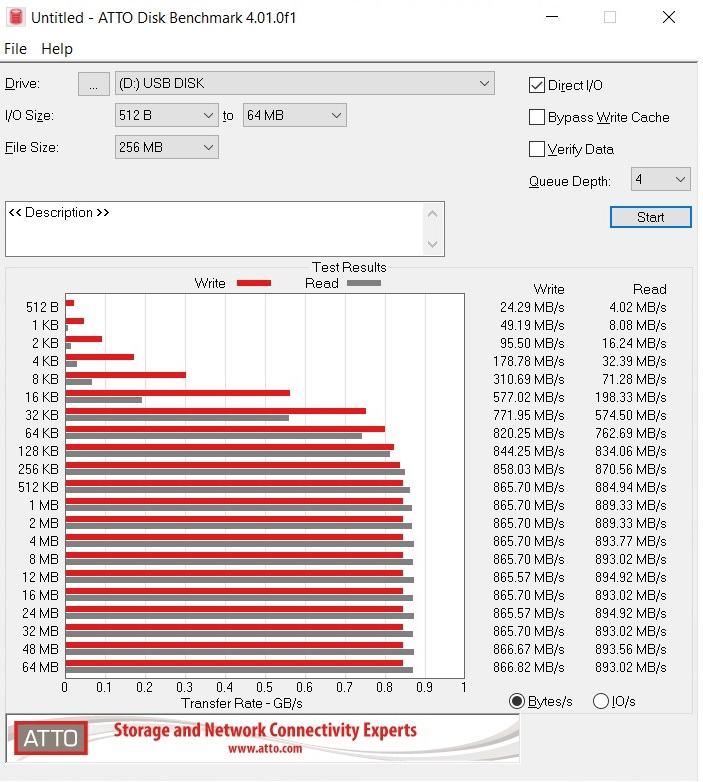 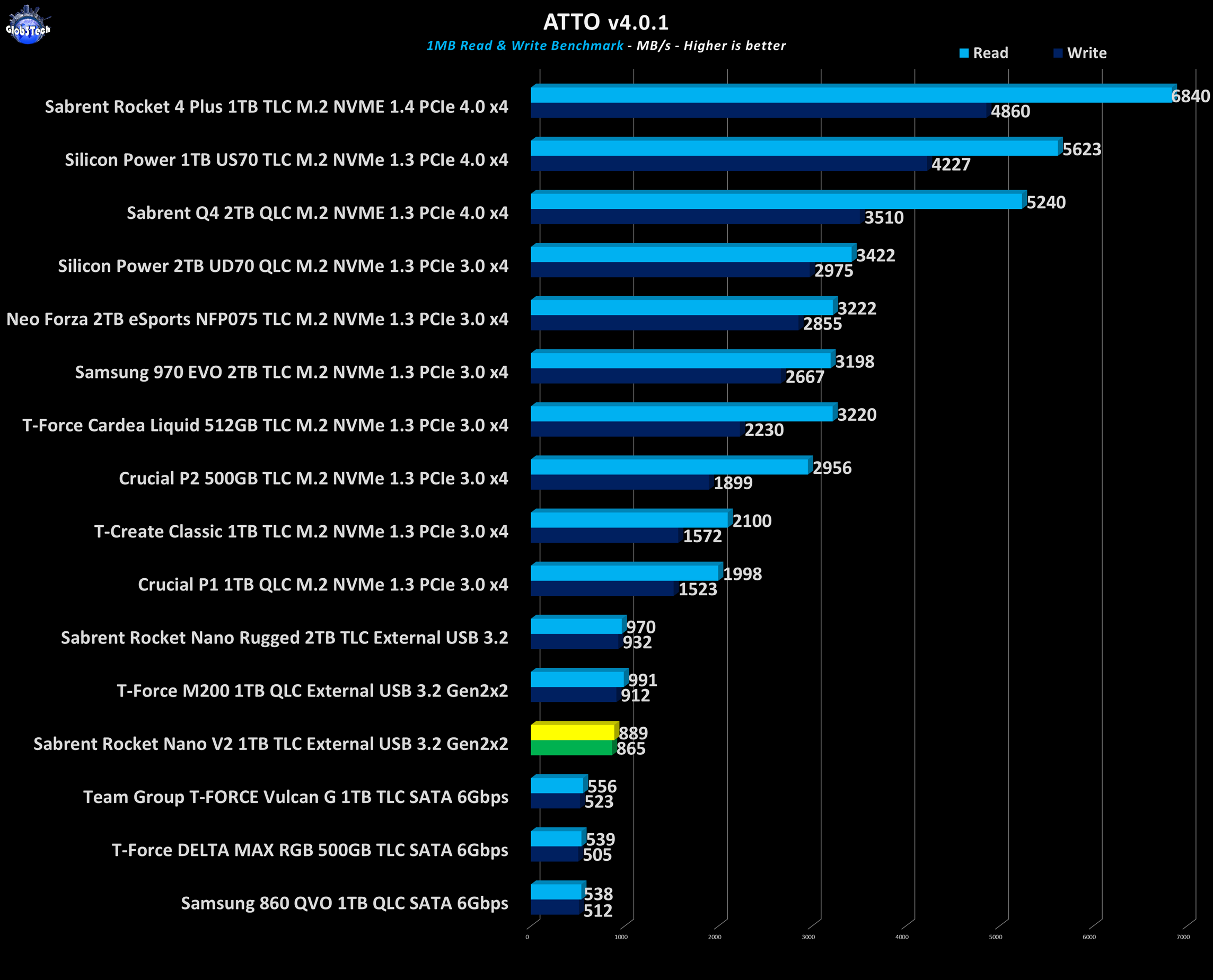 Taking into consideration that this Rocket Nano V2 even at 1TB, will make an excellent external games’ library (like Steam etc), let’s see how are the loading times when compared to internal mounted drives.

The final practical test revolves around some real life copy tests. First, we will copy to the SSD a single 5.4GB .mkv video file to test the burst speed followed by a big 119GB installation folder from the Red Dead Redemption 2 game. Apparently the SLC cache on this model is around 24GB which is reserved for random writes. Since the SSD has TLC cells, it can afford to have a sustained write capability, as you can see from the flat average writing speeds, even in large mixed data transfer. 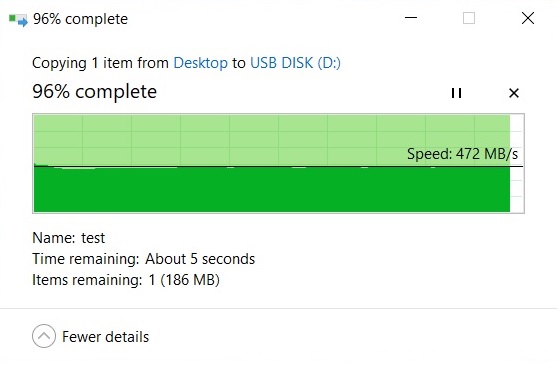 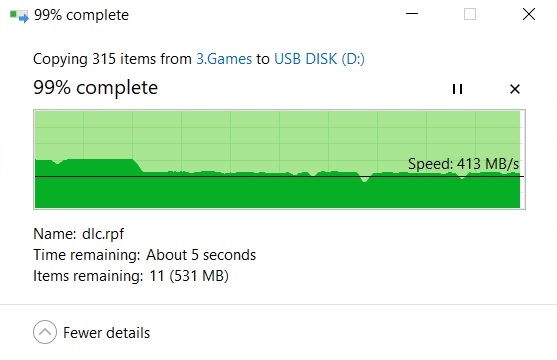 Regarding the operating temps, the Nano V2 behaves really well (barely touching mid 40s degrees C) because the M.2 drive inside is basically surrounded by an all aluminium cage, which in turn makes the whole unit act like a big heatsink. 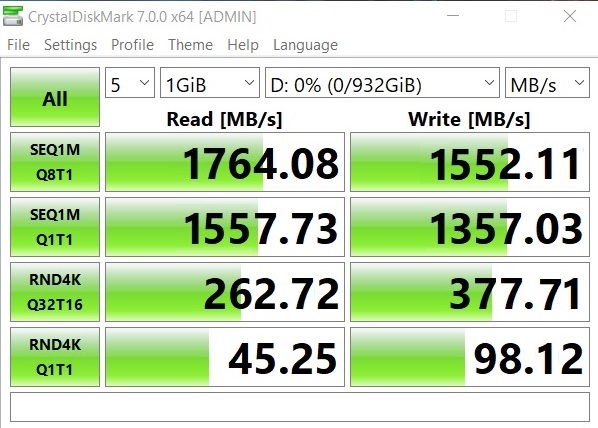 This Sabrent Rocket Nano V2 external enclosure is a logical evolution over its previous series, because now it features the upgraded bandwidth of 20Gbps (to avoid writing the confusing ‘USB 3.2 Gen2x2’ naming scheme). Then the excellent combination from the SK Hynix cells and the Phison U18 controller, all of which are on a custom/hybrid PCB, they manage to provide, as advertised, great sustained writing speeds. It will not set records of peak absolute numbers, but thanks to its TLC native cells, it will always have an upper hand over QLC equivalent drives. Finally, taking into consideration its tiny footprint and high portability, well, this is an absolute best bang for buck product!

– Weird ‘fall-back’ / down-throttle mode on USB4/Thunderbolt 3 and 4
– Be a while until most mid-tier motherboards will have USB 20Gbps ports as standard, or consoles – thus, will require a PCI-Express x4 add-in card, if you’re motherboard has a spare x4 slot
– No IPX rating, or at least a removable cover from the rubber case

A lot of thanks to Sabrent for supplying us with this fast enclosure! 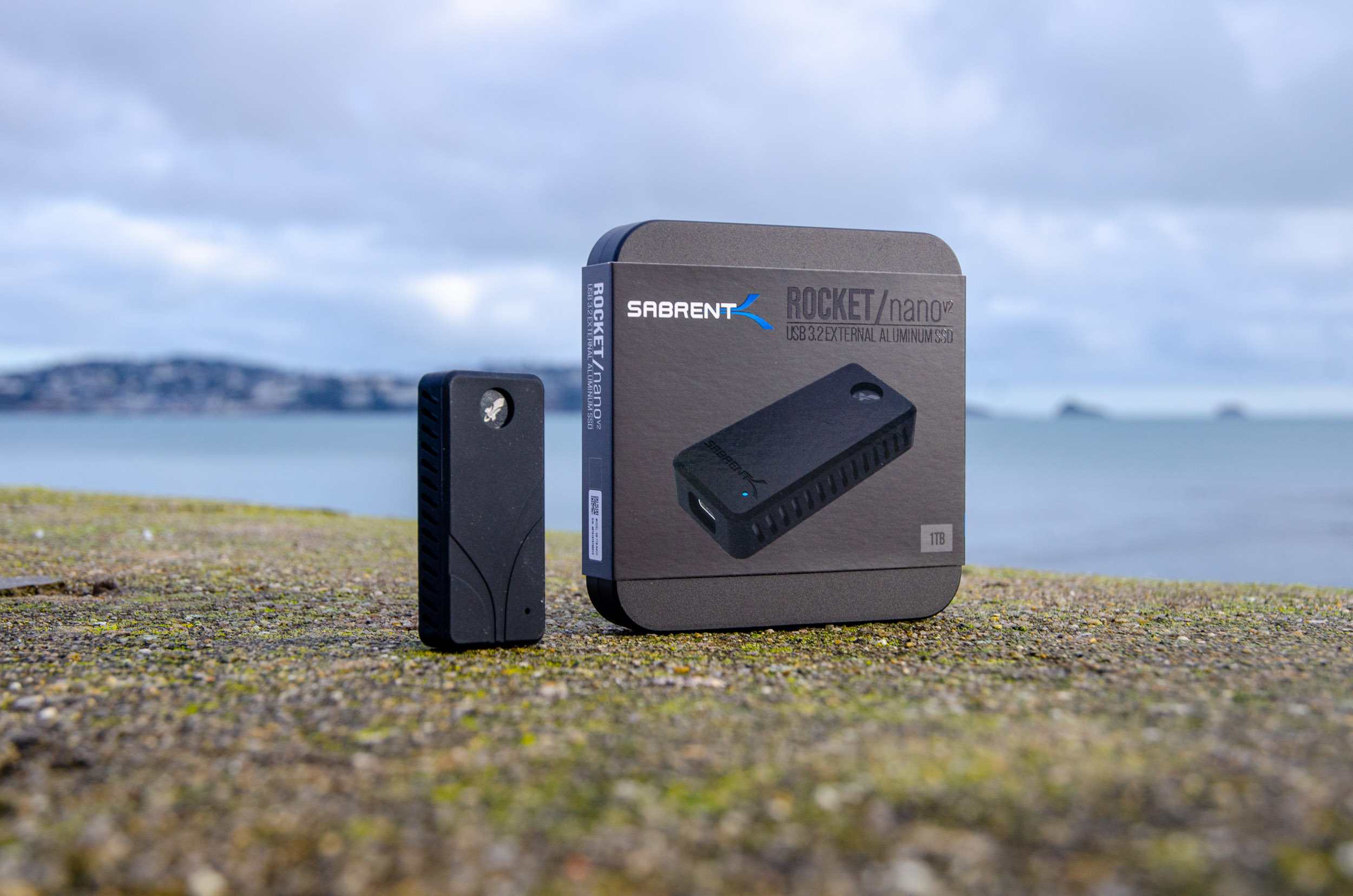