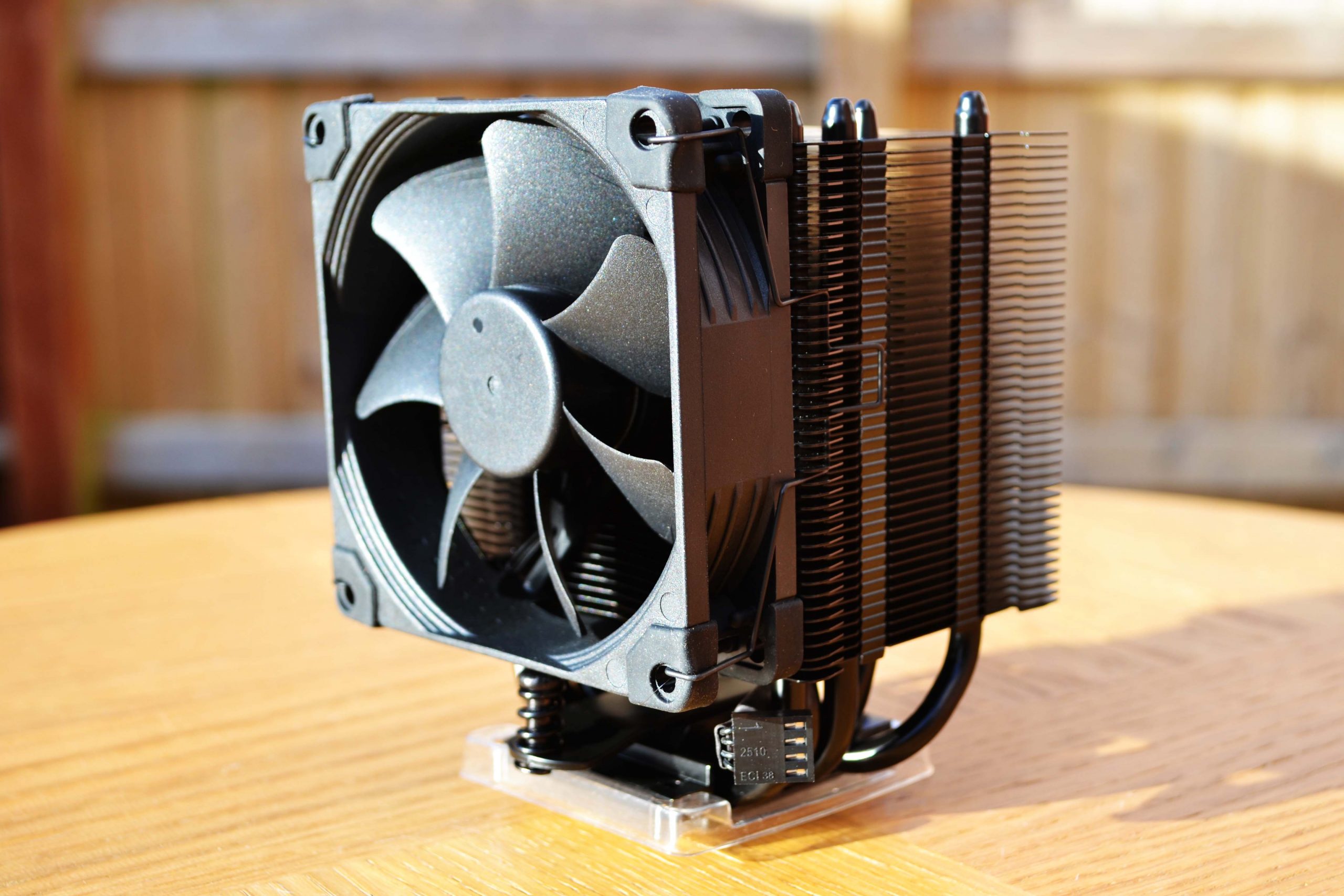 Small form factor builds are very popular and finally now we have another product from Noctua in the chromax.black treatment that will fit most HTPC cases. The only option was the famous L9a/i if you really wanted it in black.

The U9S has replaced the U9B SE2 due to its improved asymmetrical design that allows outstanding RAM, case and PCIe compatibility especially with ITX boards and became a standard for premium single tower 92 mm coolers. Today we are happy to test it in the famous all black paint job.

It’s only $5 more expensive than the regular U9S and $10 over the dual tower 92 mm champion the D9L according to Amazon. As you are about to see, you can’t go wrong with either especially with the D9L which has so much cooling potential because it is is the only dual tower 92 mm heatsink out there. But the U9S as the U12S are ‘ground zero’ to which we will rate everything else. 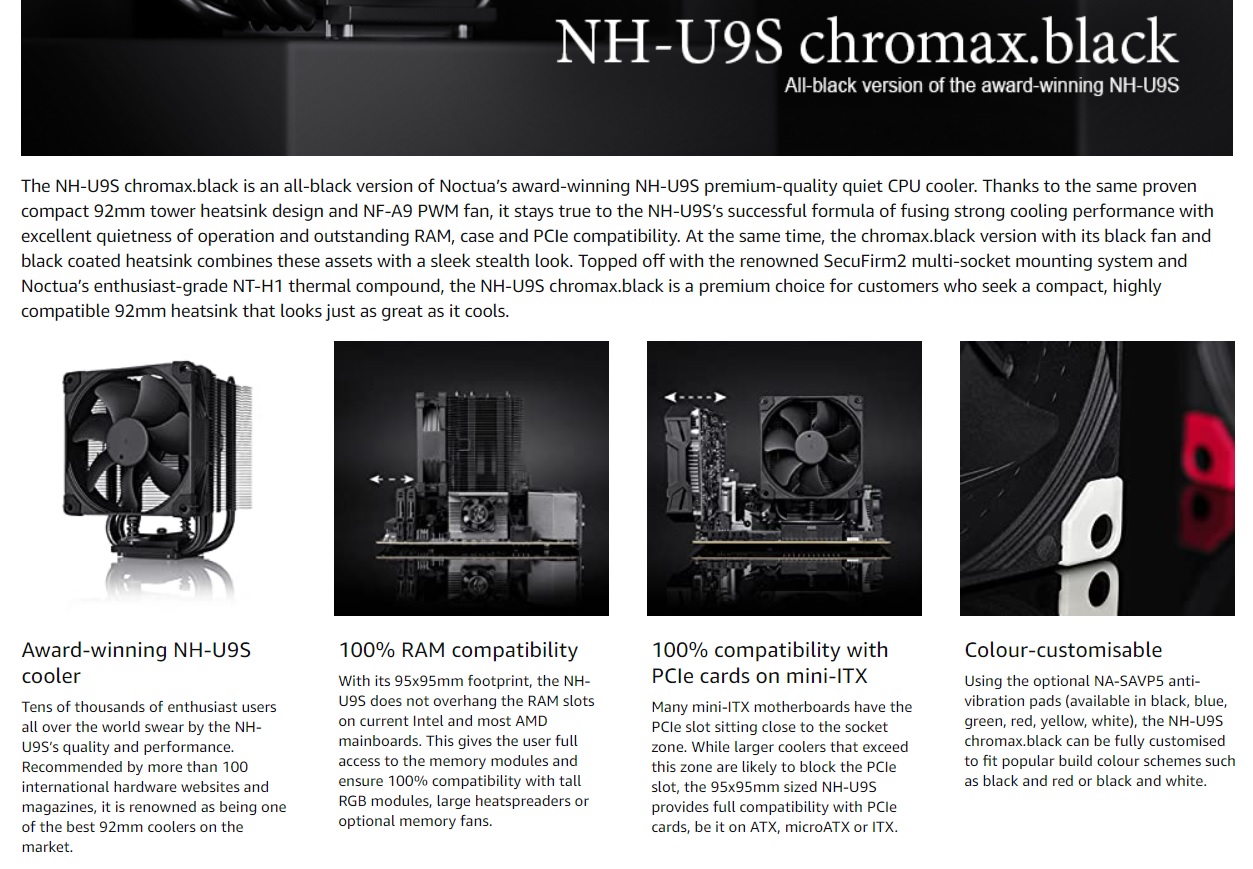 This is why we mentioned that the U9S is already the gold standard to which we will compare any 92 mm CPU cooler, because it promises zero interference all around the socket area due to its asymmetrical design. Also its proven track record of performance and famous Noctua build quality will further support its status.

The packaging has the new standard all black design to reflect the chromax.black tratment. 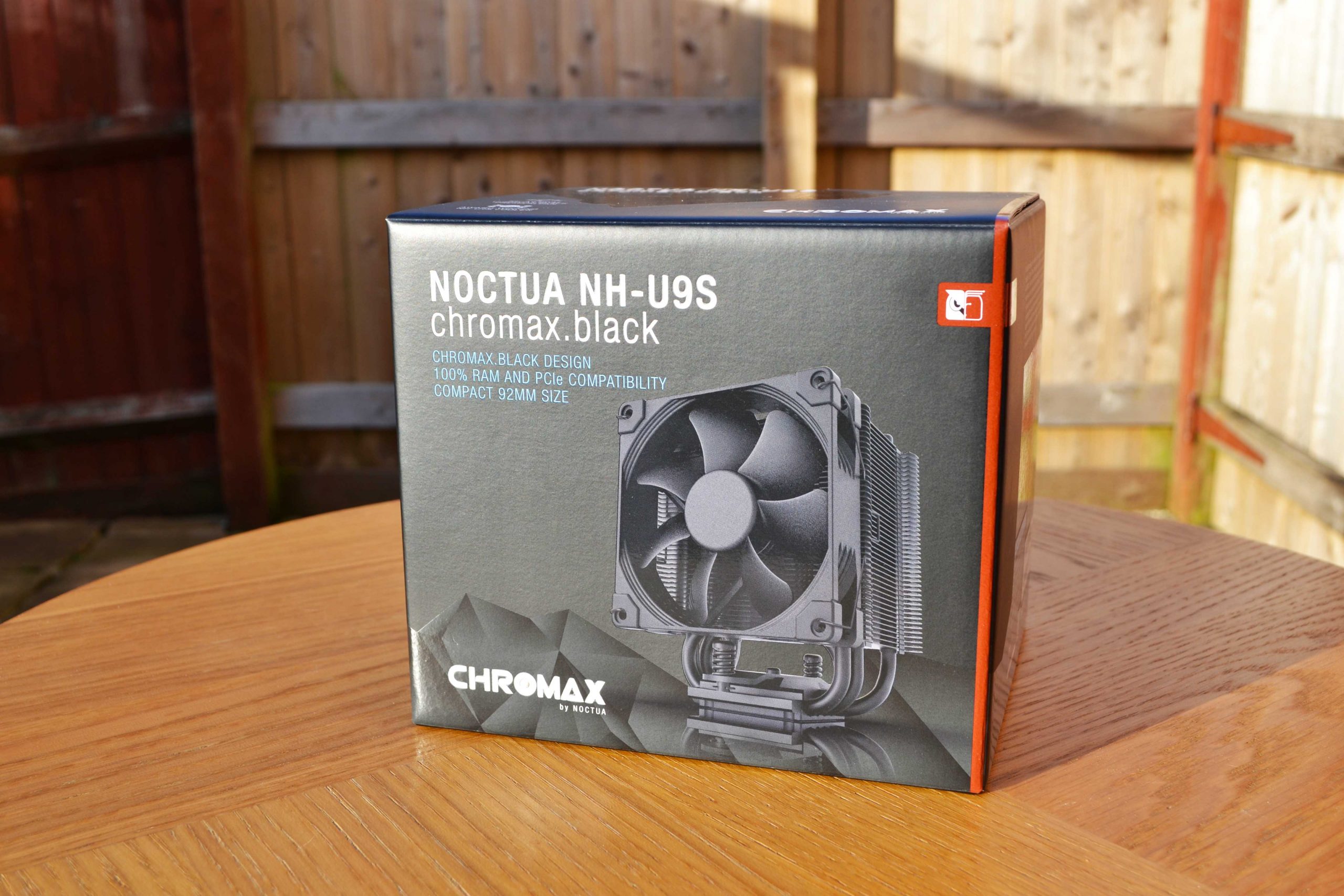 The presentation is perfect and a joy to explore and read. Take this small eye catching detail, where the visual depiction of the product is visible on two sides. Also on these two sides we have the main highlights of the U9S. 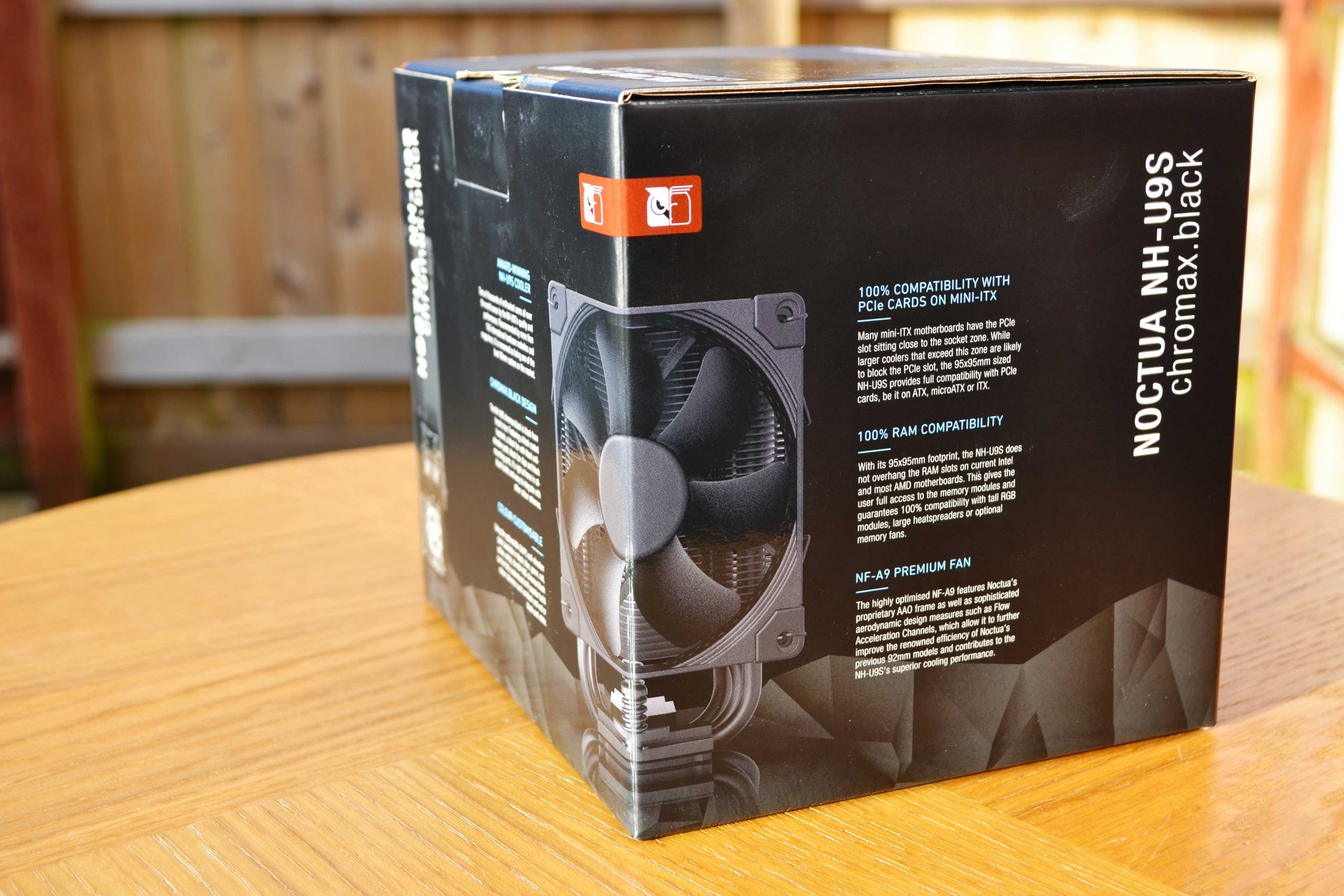 On this side we have the full specs for the heatsink and fan and even the accessory list. 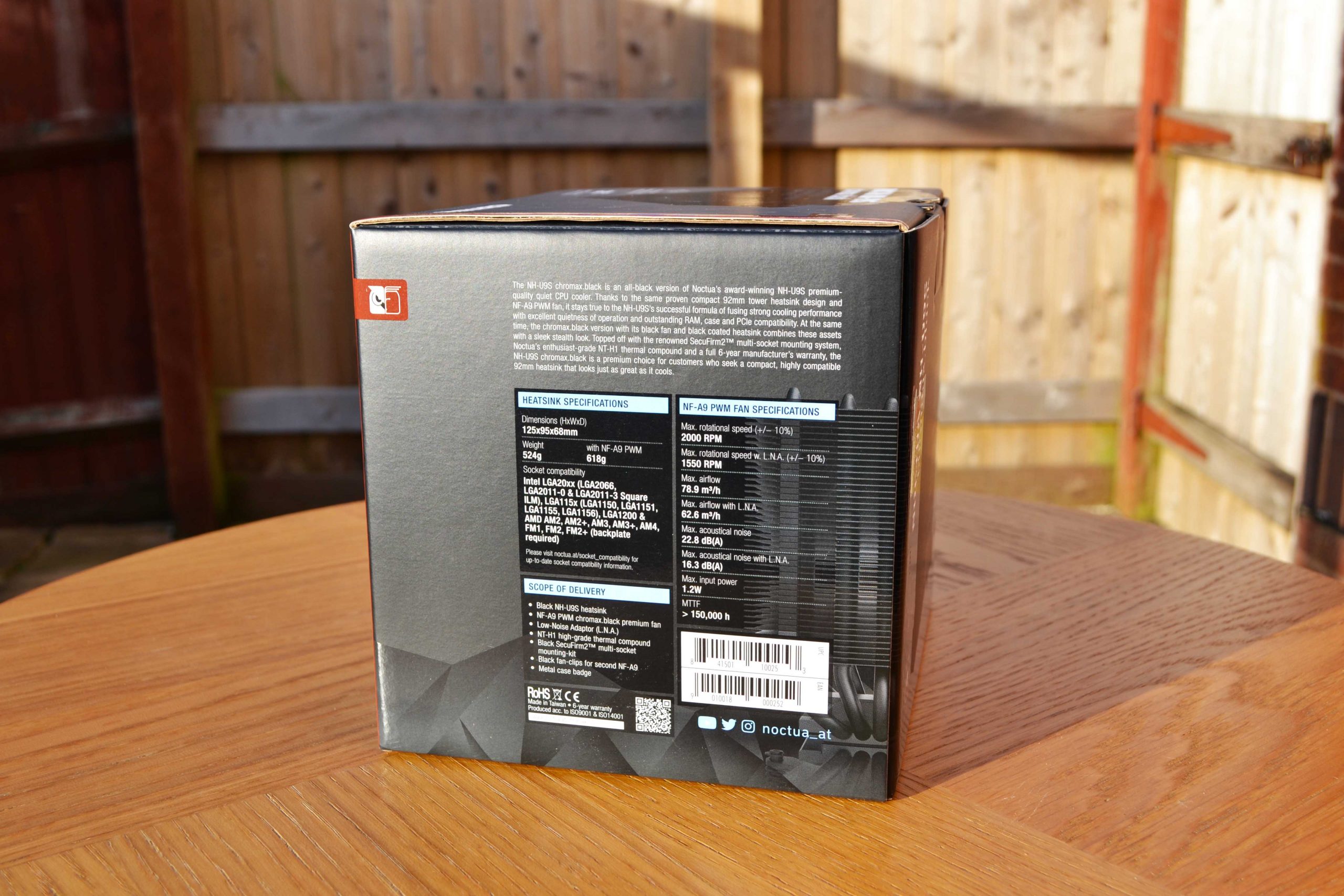 Opening the box we are greeted with the accessory box that has the famous checklist. 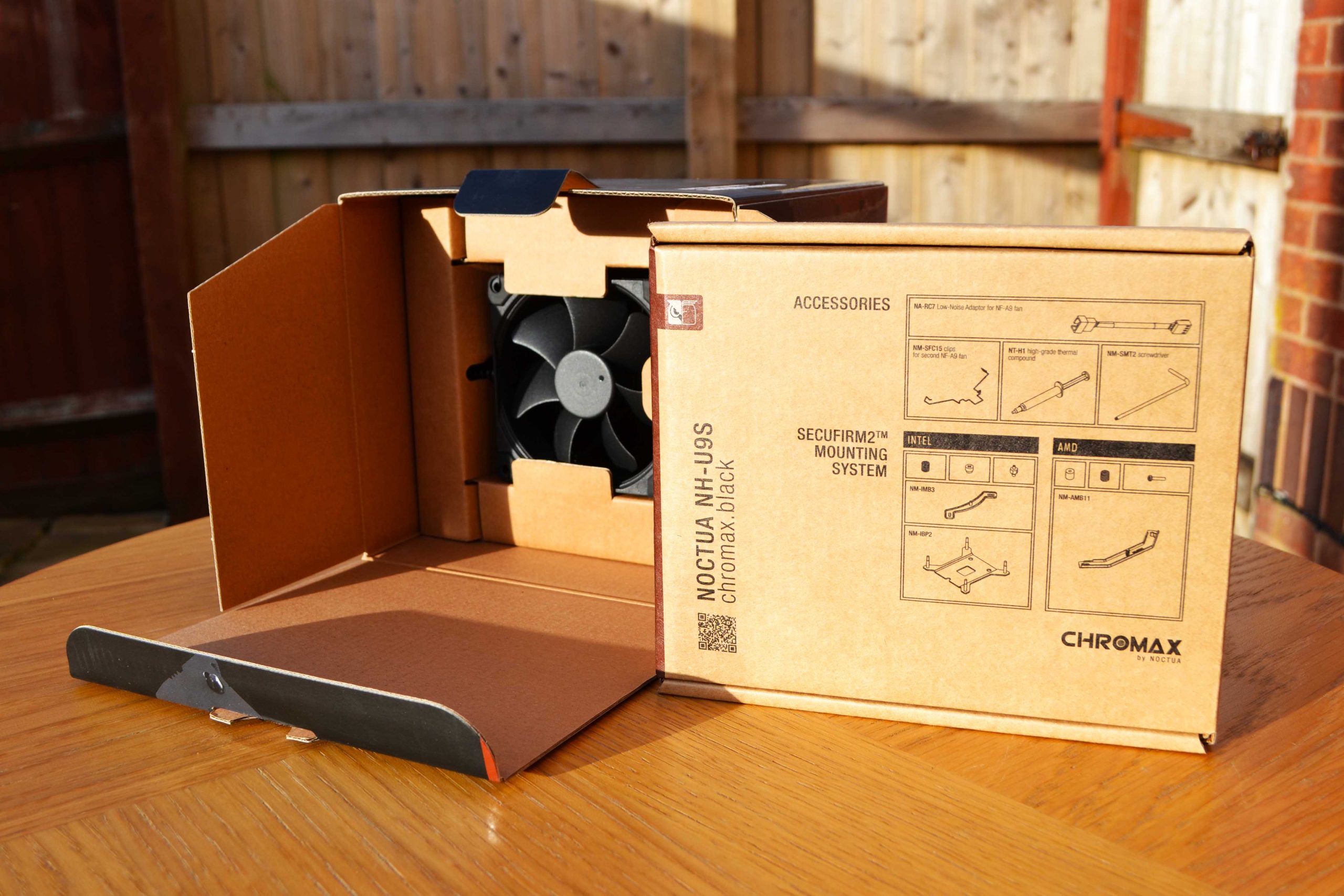 Speaking of, here is the full accessory list breakdown: 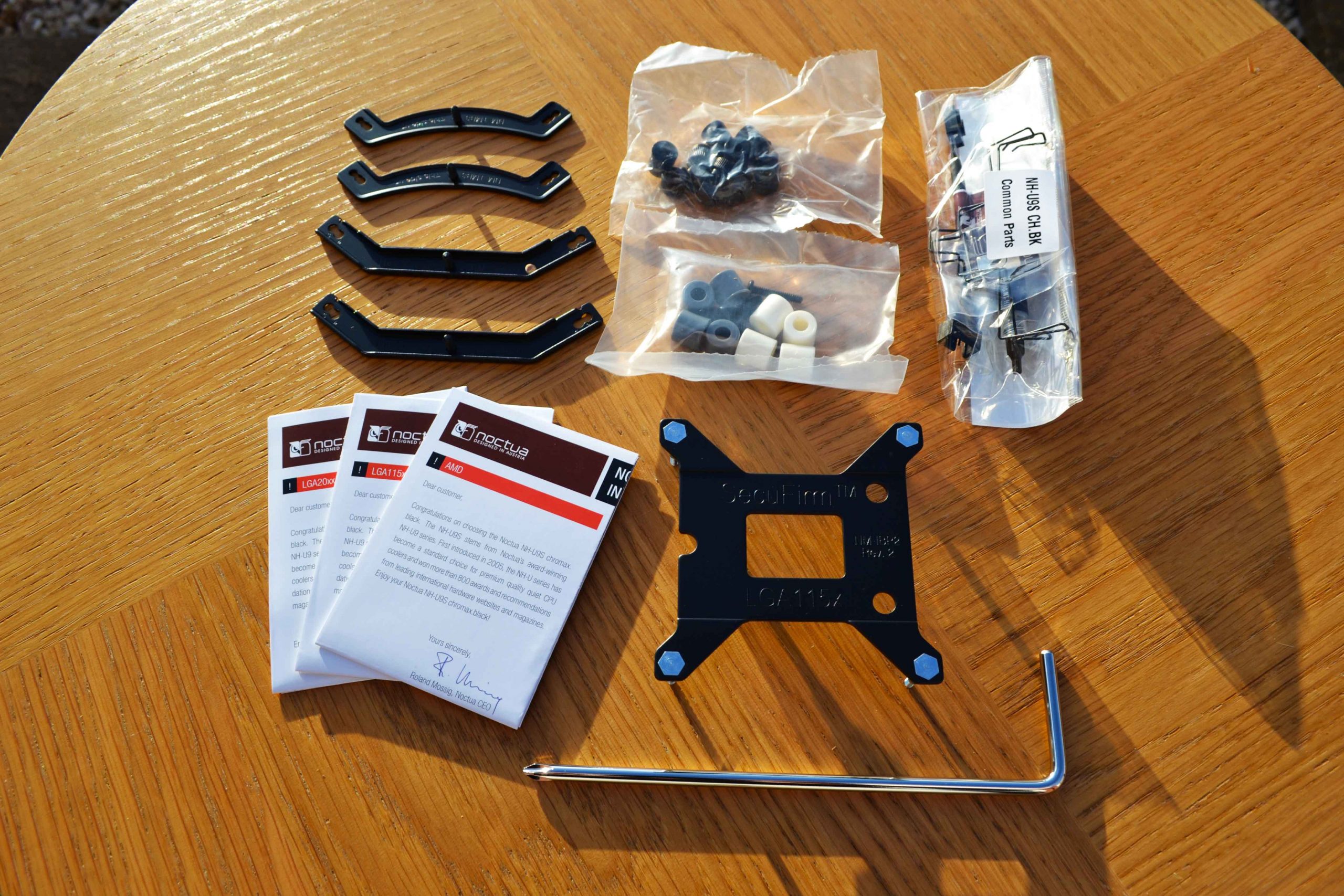 The NH-U9S is fully protected from all sides within this cardboard cocoon. 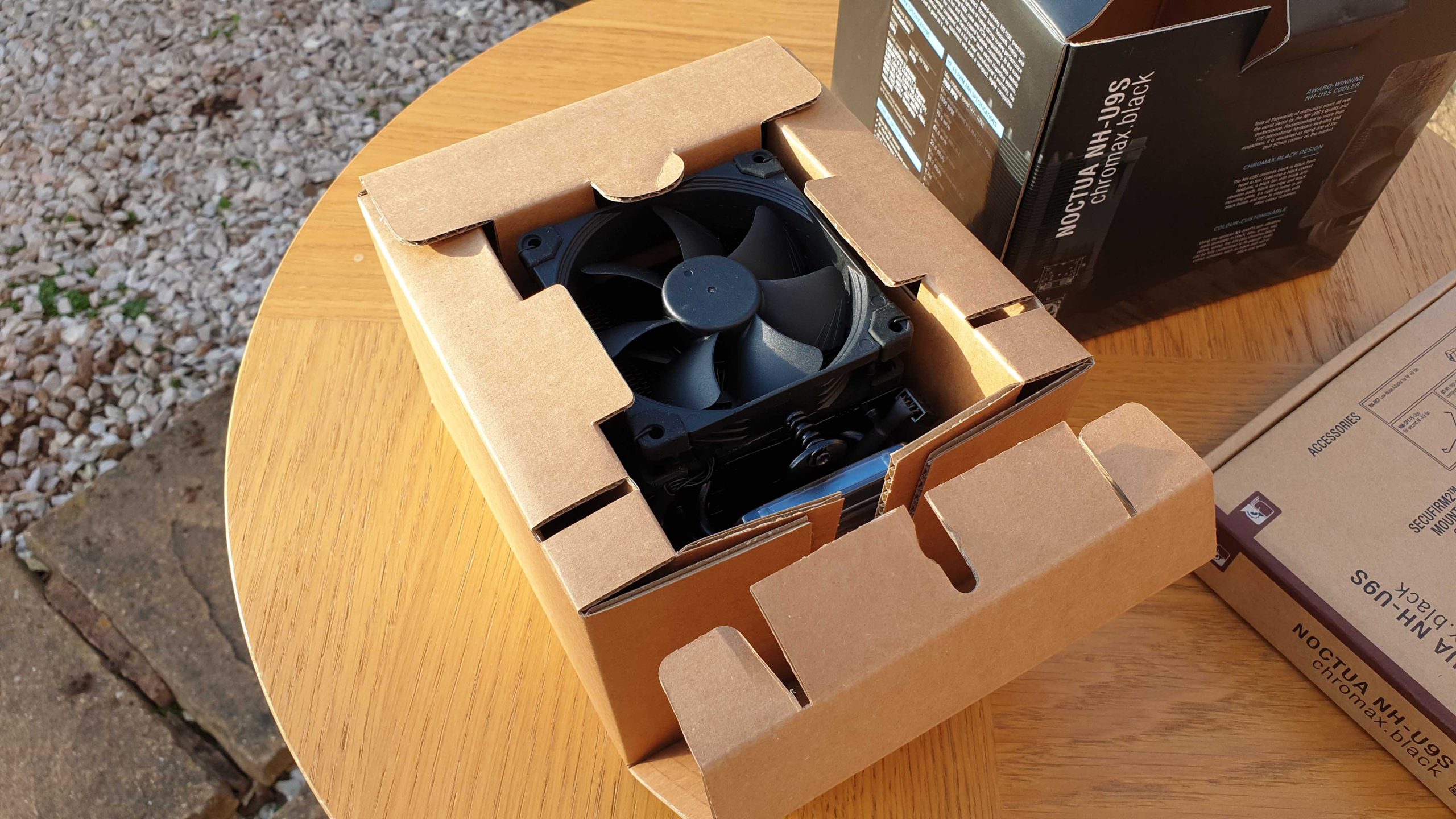 This is beyond cute and sexy ! just look at it!

It measures 125 mm tall and 95 mm in width and depth with the fan attached of course, while weighing only 618 grams. 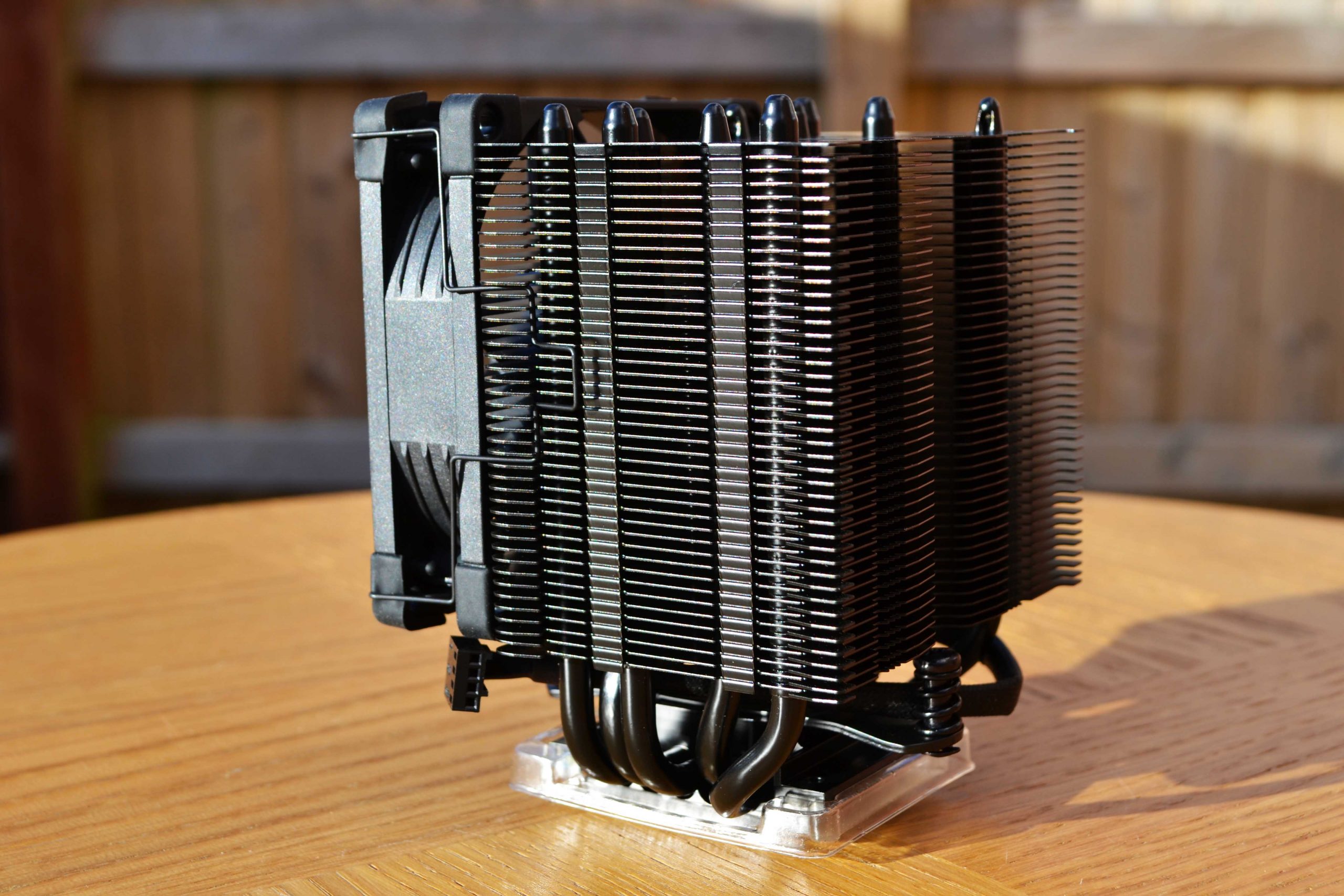 We have 5x nickel plated 6 mm thick copper heatpipes that hold into place 43 aluminium fins. Then the base plate has an almost mirror polish to it. 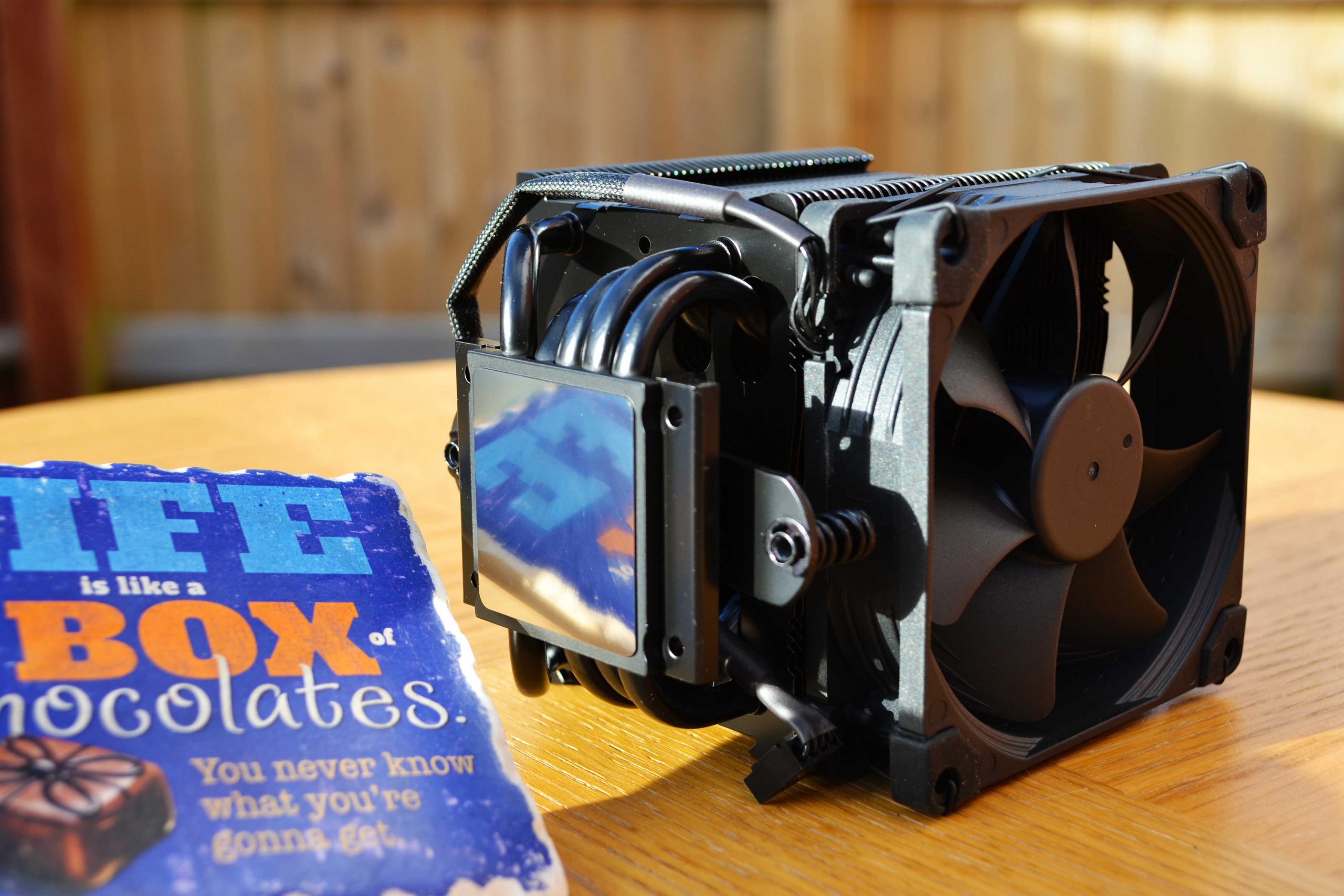 The top plate has the Noctua logo displayed in a subtle engraving which is surrounded by the ends of the heatpipes. 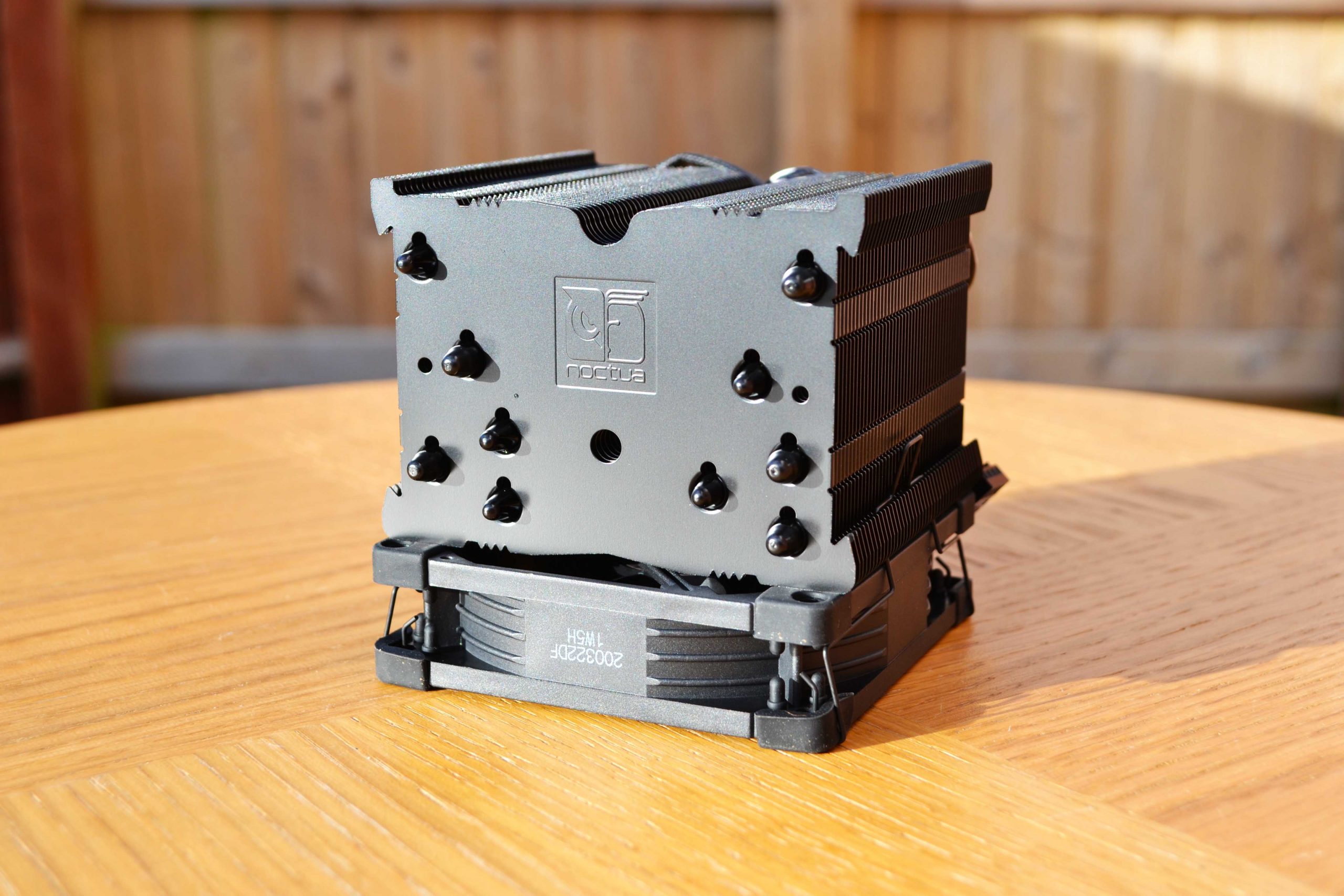 From this angle we notice a very aggressive concave fin design which should improve airflow. Also we have the recess that facilitate access to one of the securing screws while the whole in stack of the middle of the fins is for the other bolt. 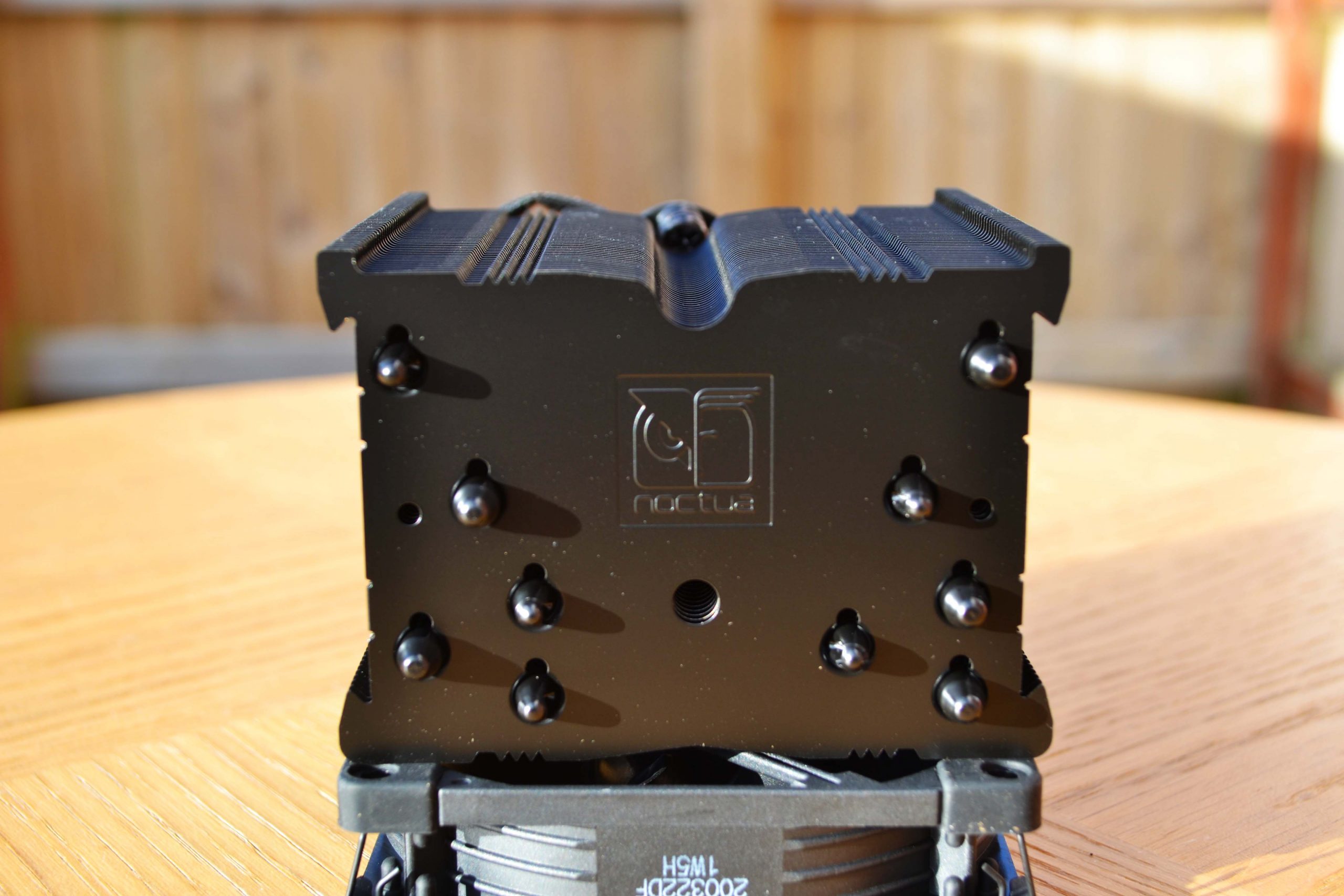 Removing the fan, clearly shows the clever offset/asymmetrical design of the heatsink. 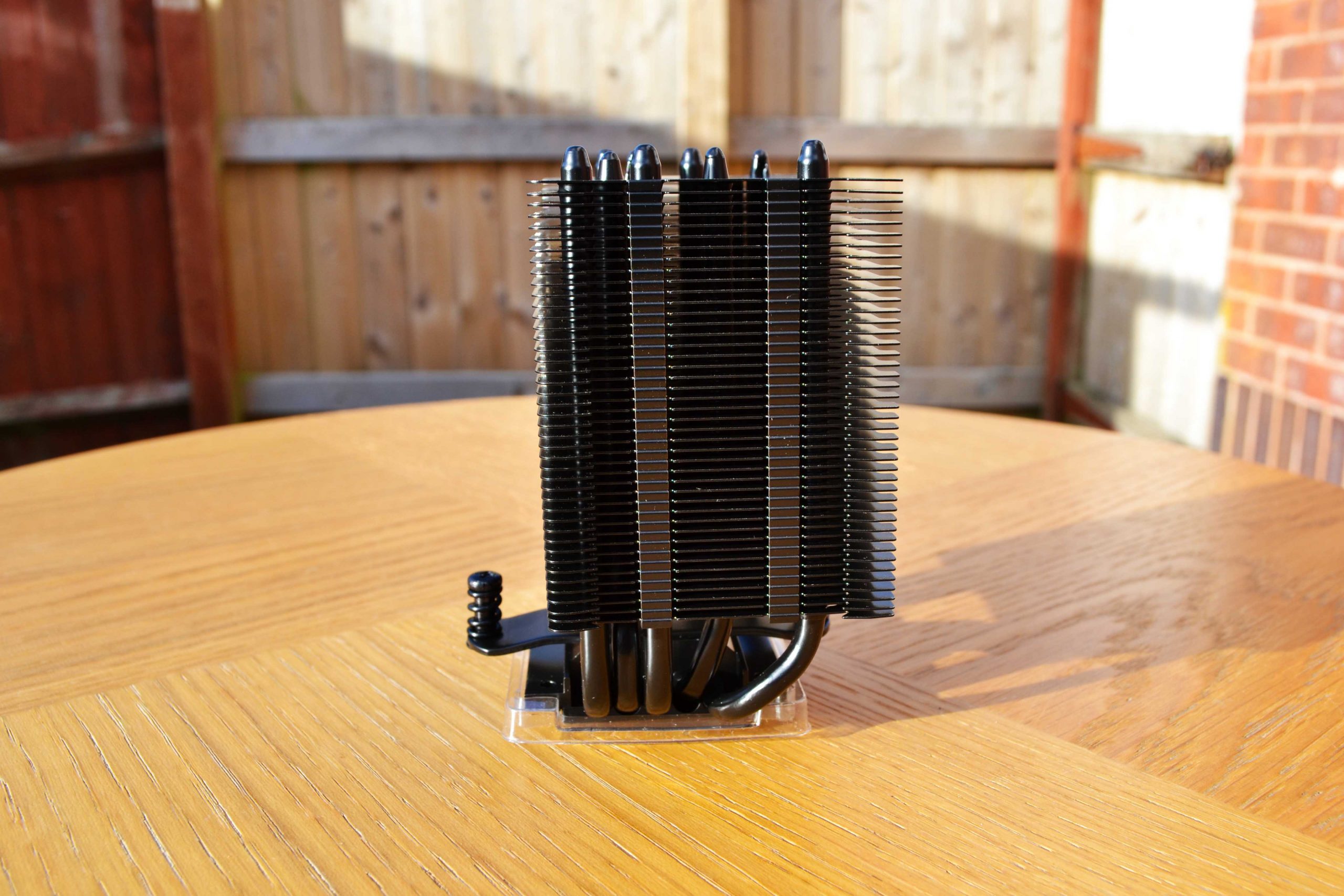 Now the supplied NF-A9 PWM chromax.black fan. We must mention this on every review regarding the SSO2 bearings which are Noctua’s own design. The self-stabilizing oil-pressure bearing (SSO-Bearing) system has always been at the heart of Noctua’s award-winning premium fans. 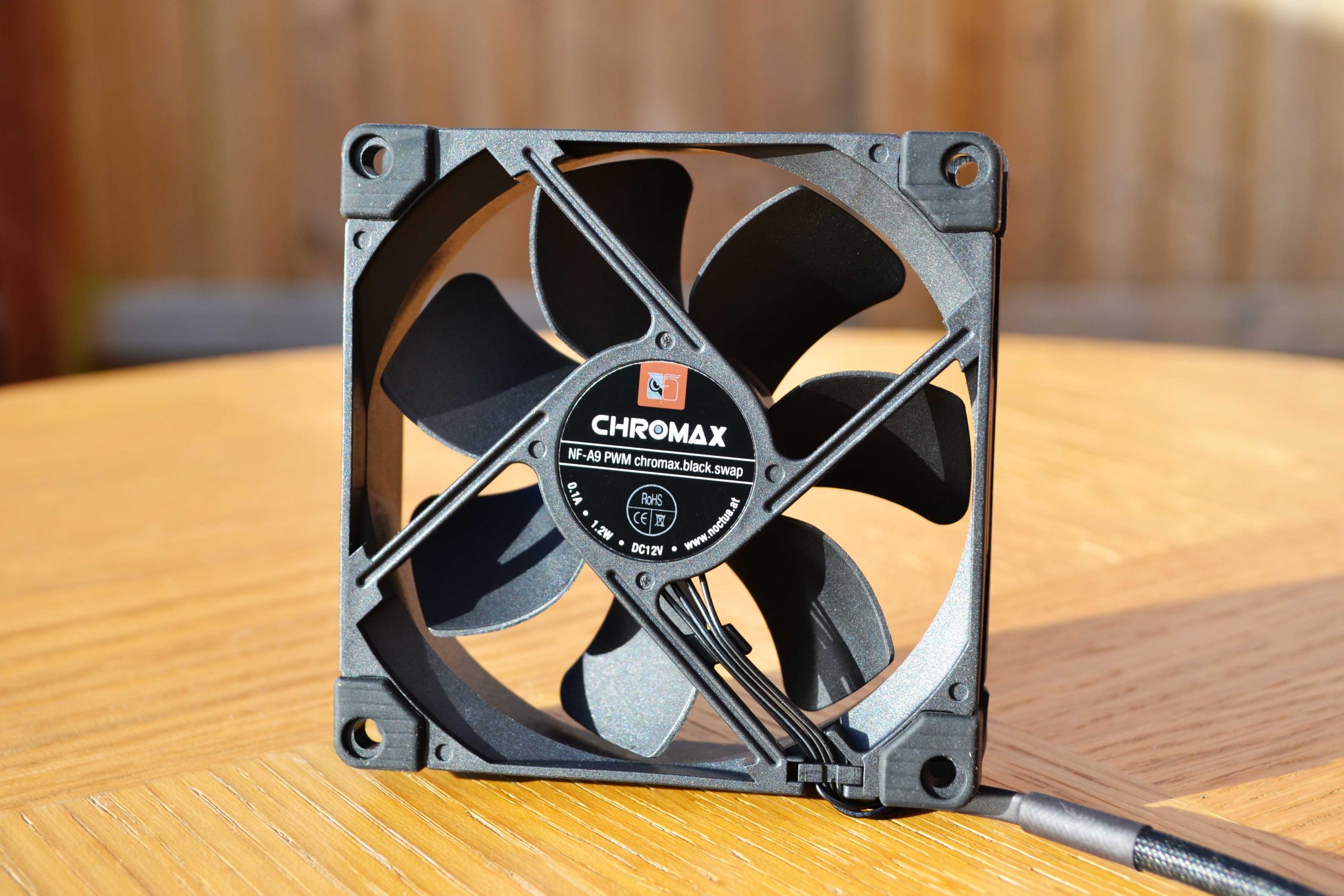 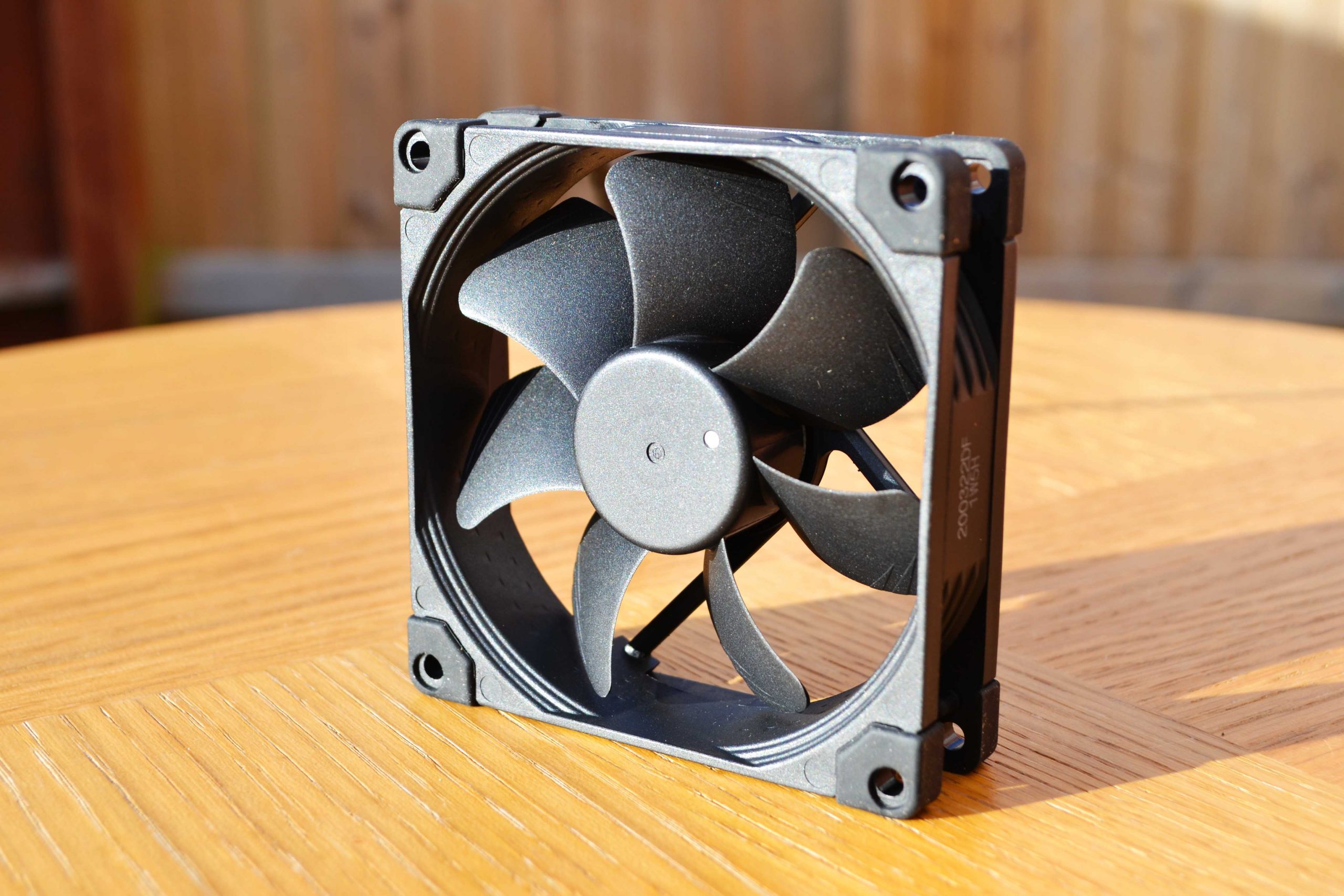 Our main testing platform is centred around AMD’s AM4 socket but in an ITX format to fully test any RAM compatibility issues, since on this layout, all of the components are crammed more together than the larger motherboard formats. Thus the NH-U9S should be right at home.

Noctua’s SecuFirm2™ mounting platform is also present and from previous experiences, this is one of the easiest and most straight-forward installation sequences ever, especially on the AM4 socket.

Make sure you keep the stock AMD backplate after you remove the stock front plastic brackets. Then attach the plastic grey AM4 spacers. 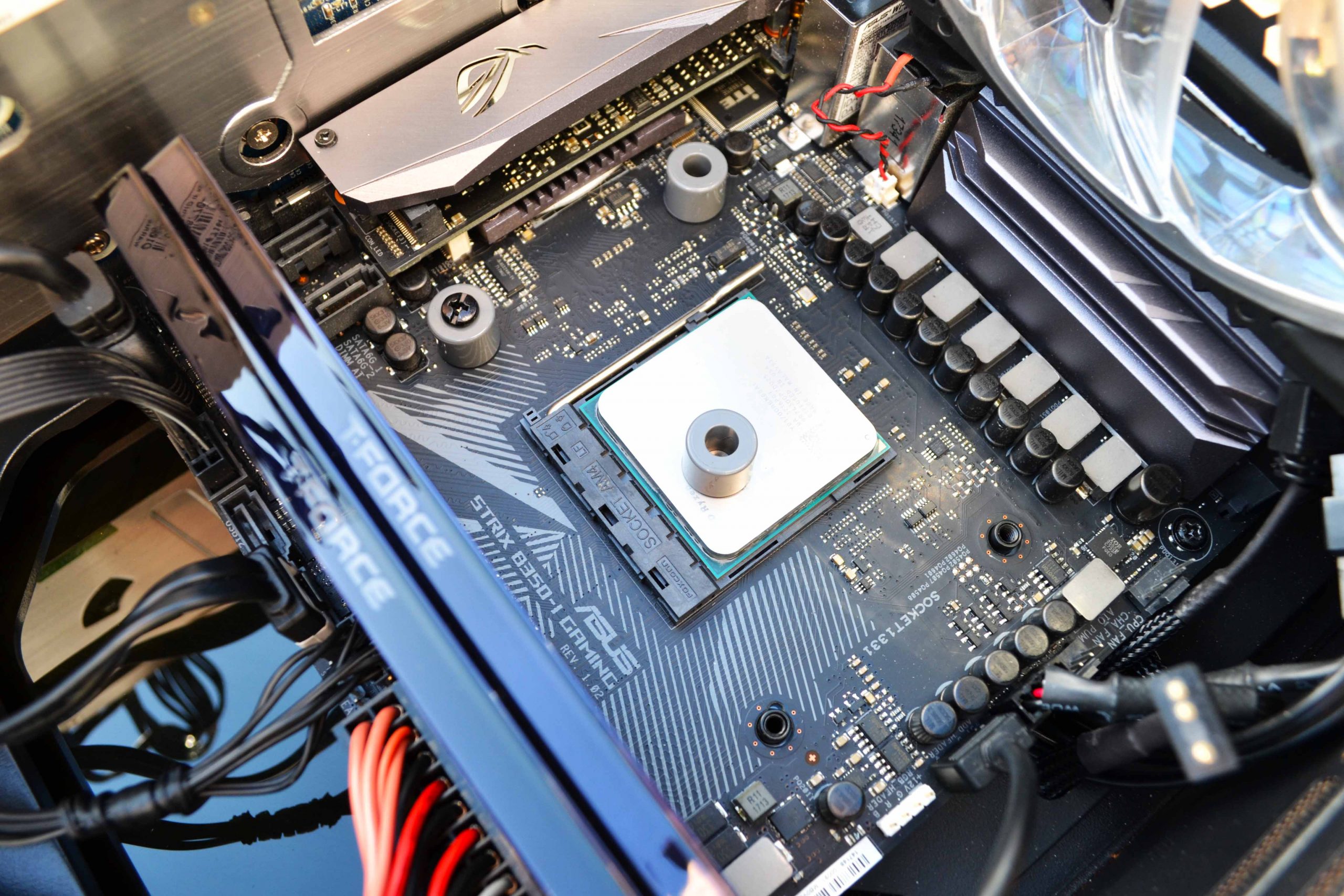 Next step involves securing down the metal brackets while making sure that they are facing outwards like so. 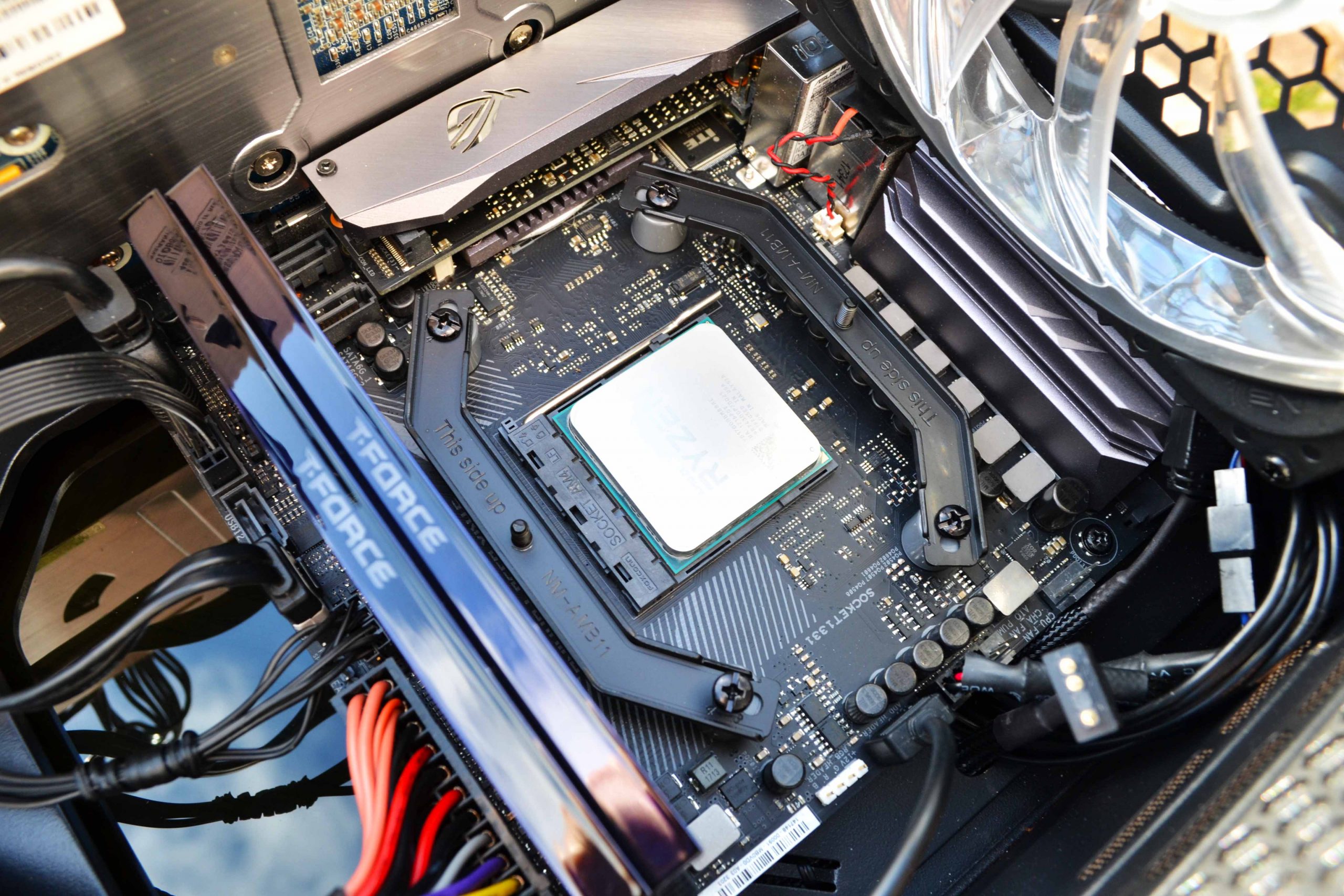 After the thermal paste is applied, just bolt down the heatsink and that’s it ! Easy as that. 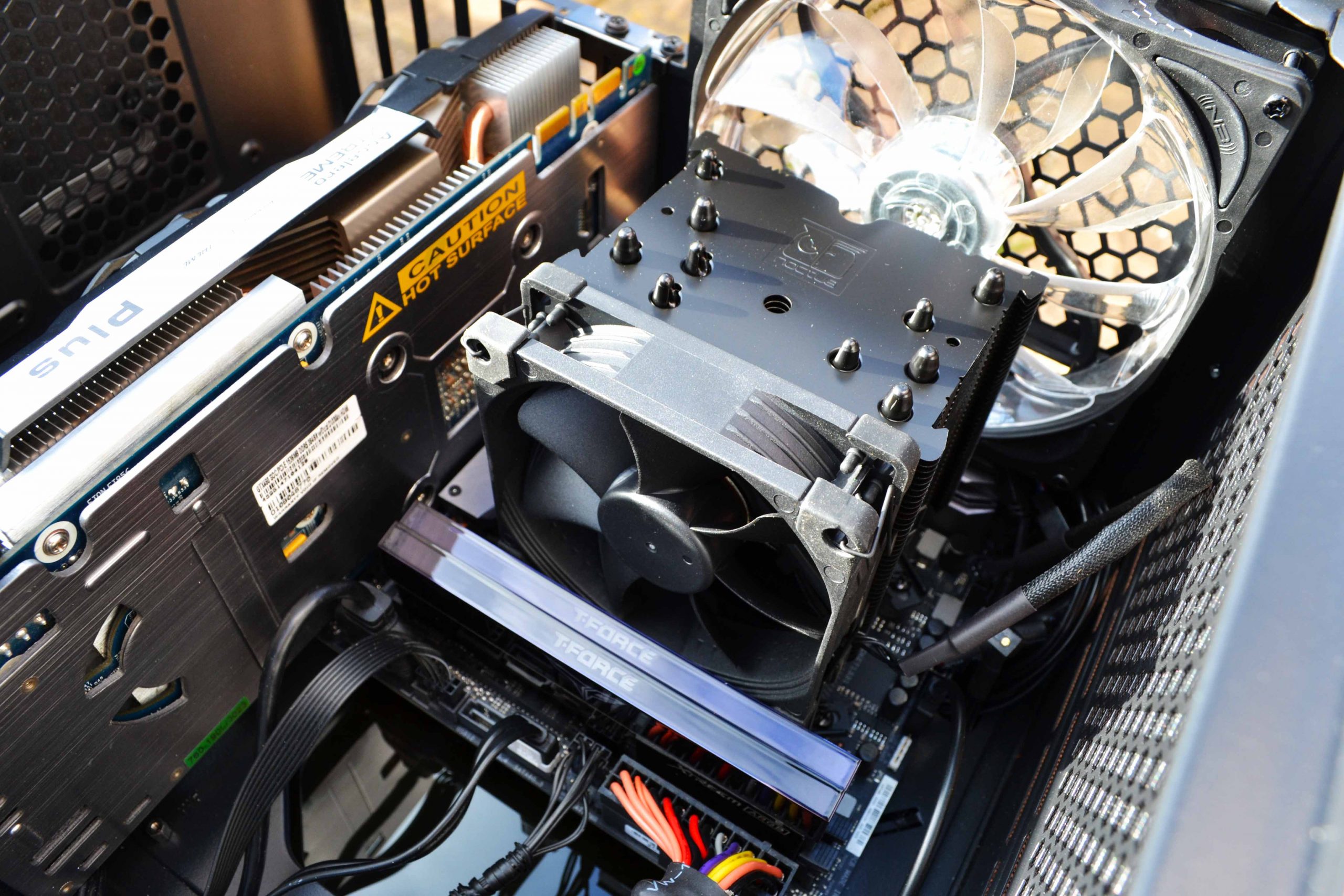 There is no clearance issue what so ever from any angle and corner. 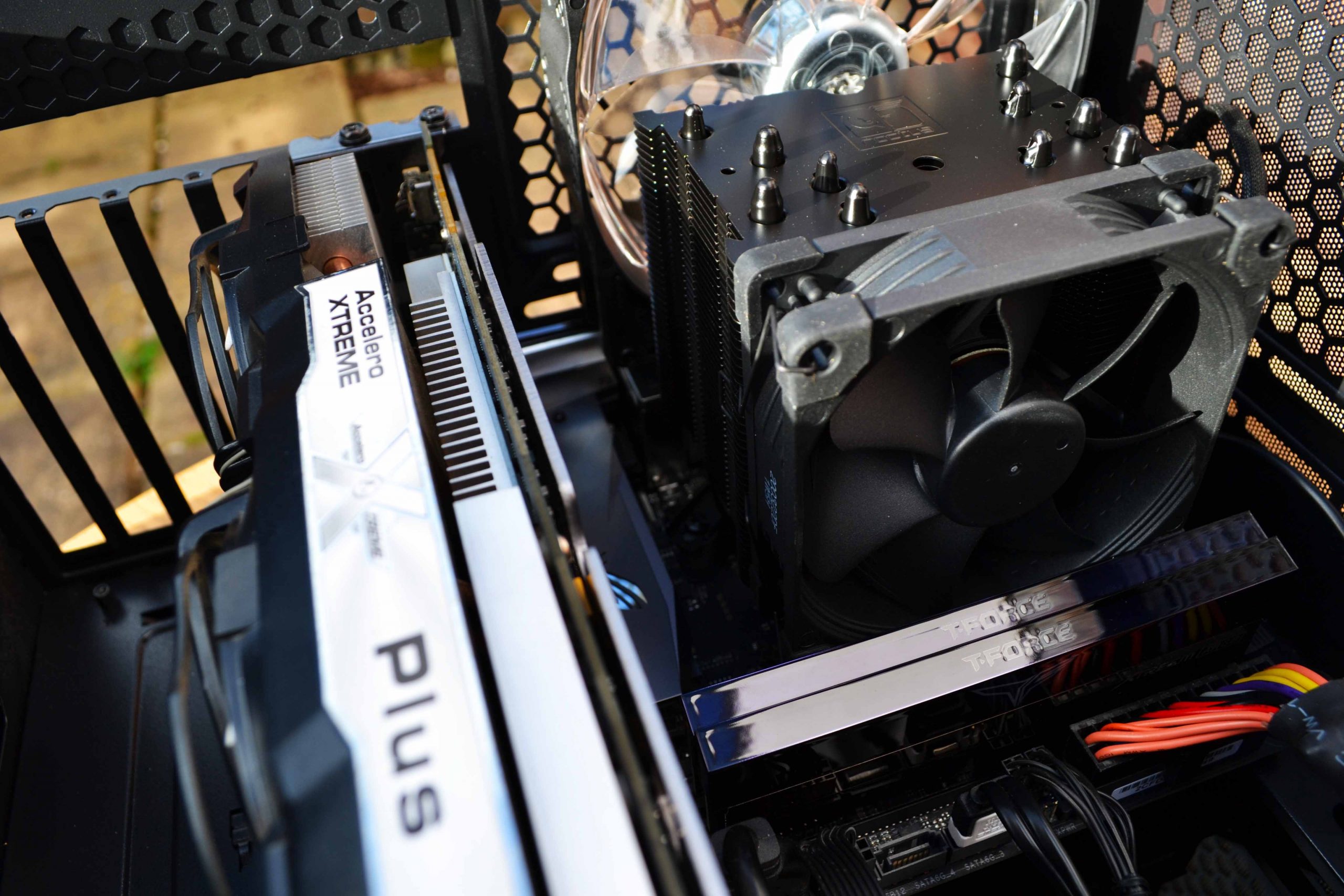 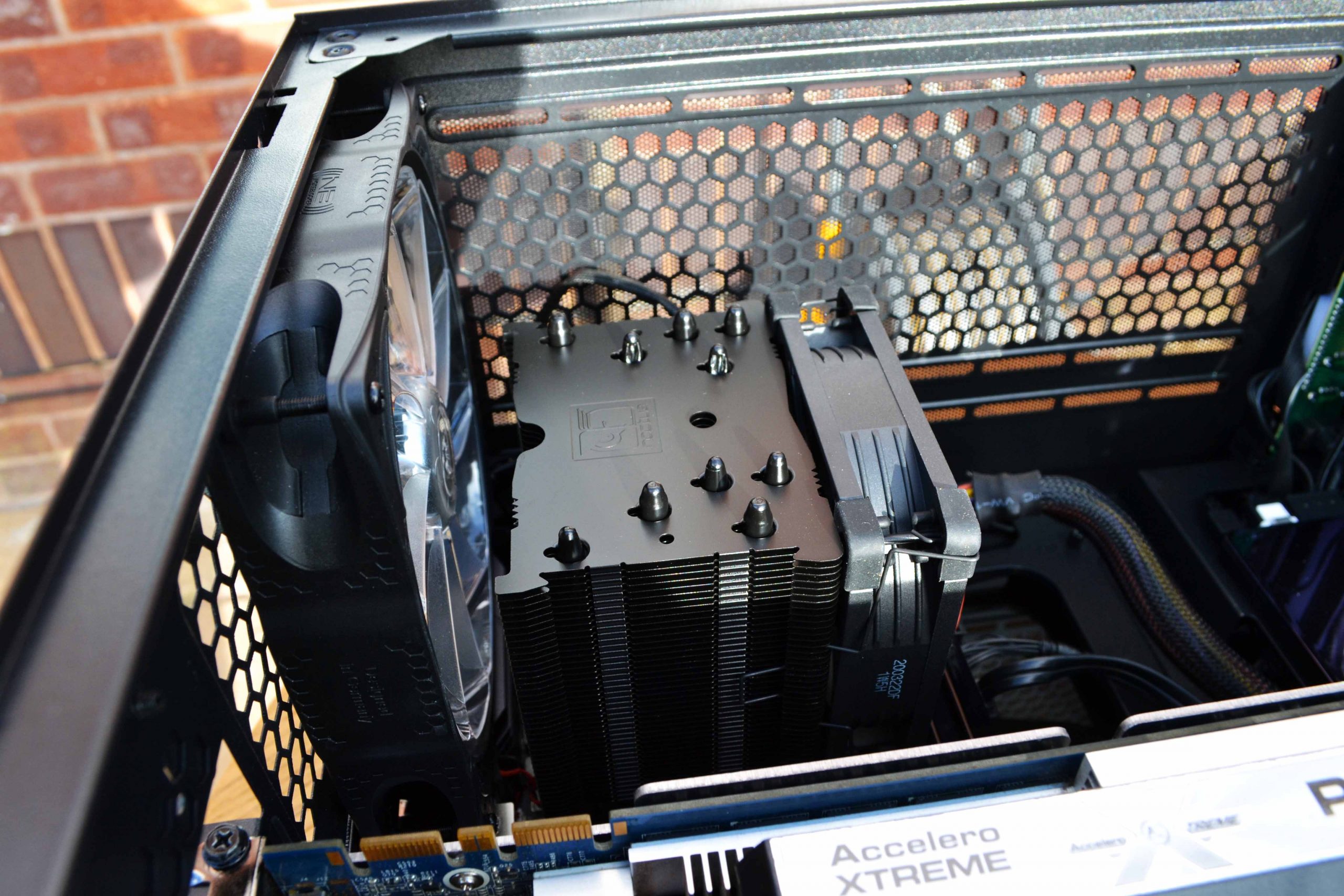 As you can see you can have memory modules as tall as you want.

Finished assembly shot and now let’s test it out. 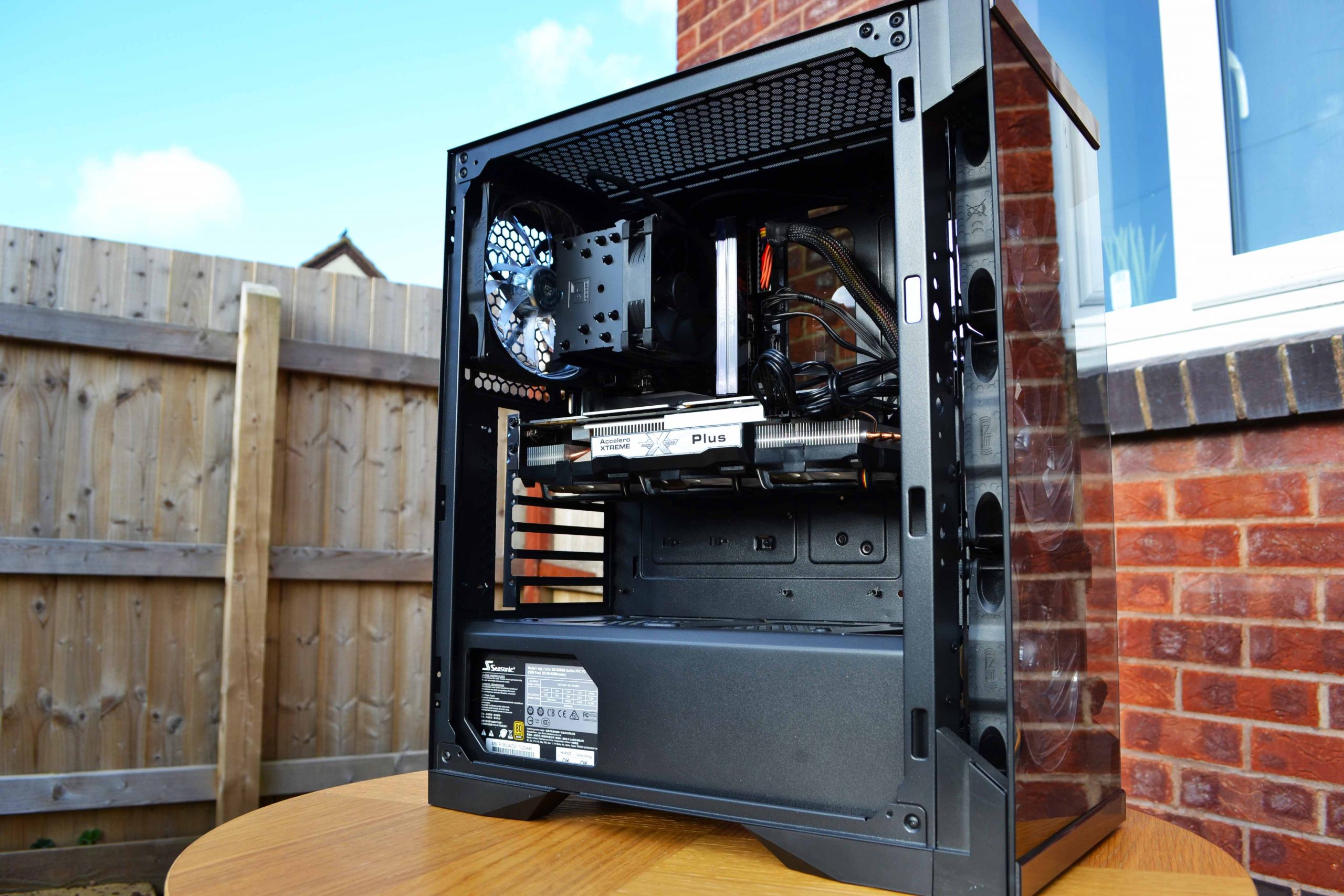 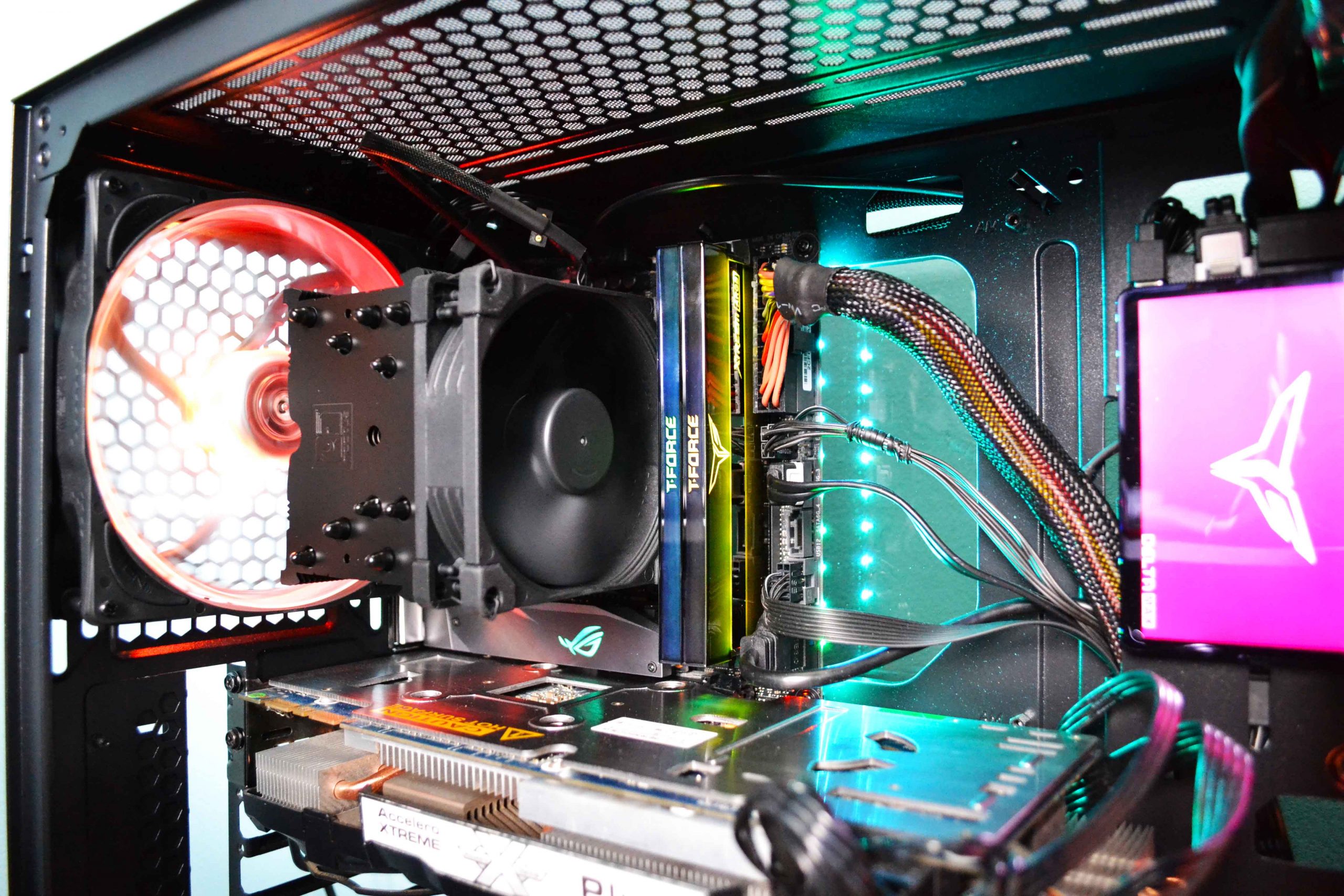 Let’s start in order of CPU load difficulty. First up is the Cinebench R15 test. On the left we have the CPU in stock form while on the right we have it overclocked. We had a really cold day hence the great results across the board. Nevertheless, it’s impressive to see that the U9S manages to beat some 120 mm single tower lower RPM CPU coolers.

The Cinebench R20 is a more modern up to date multi core benchmark suite. So naturally we will see a bigger load and thus a larger temperature figure than the R15. The U9S proves to be yet again an excellent performer even if now the bigger heatsinks take the lead over it.

In AIDA64 we isolated the stress test just for the CPU therefore we should get the highest stress scenario for the CPU. Curiously, for a while R20 proves to be as demanding in loads than AIDA64 in an overclock scenario while AIDA64 has higher figures with the CPU in stock form. The U9S maintains it’s place from the R20 spot.

Rise Of the Tomb Raider is a fantastic game and also a good testing title for both GPUs and CPUs. Still not as stressful as a synthetic torture test but a great indicator of real life usage. Since the game isn’t pushing the CPU as much as a synthetic benchmark, we see the U9S climbing slightly again in the graphs over some 120 mm single tower fans.

Noise levels tests are an easy one to analyse, after all we are talking about Noctua. The U9S is marginally louder since the 92 mm fan has to spin higher to compensate for the smaller overall fan size but still it’s a fairly quiet operation. 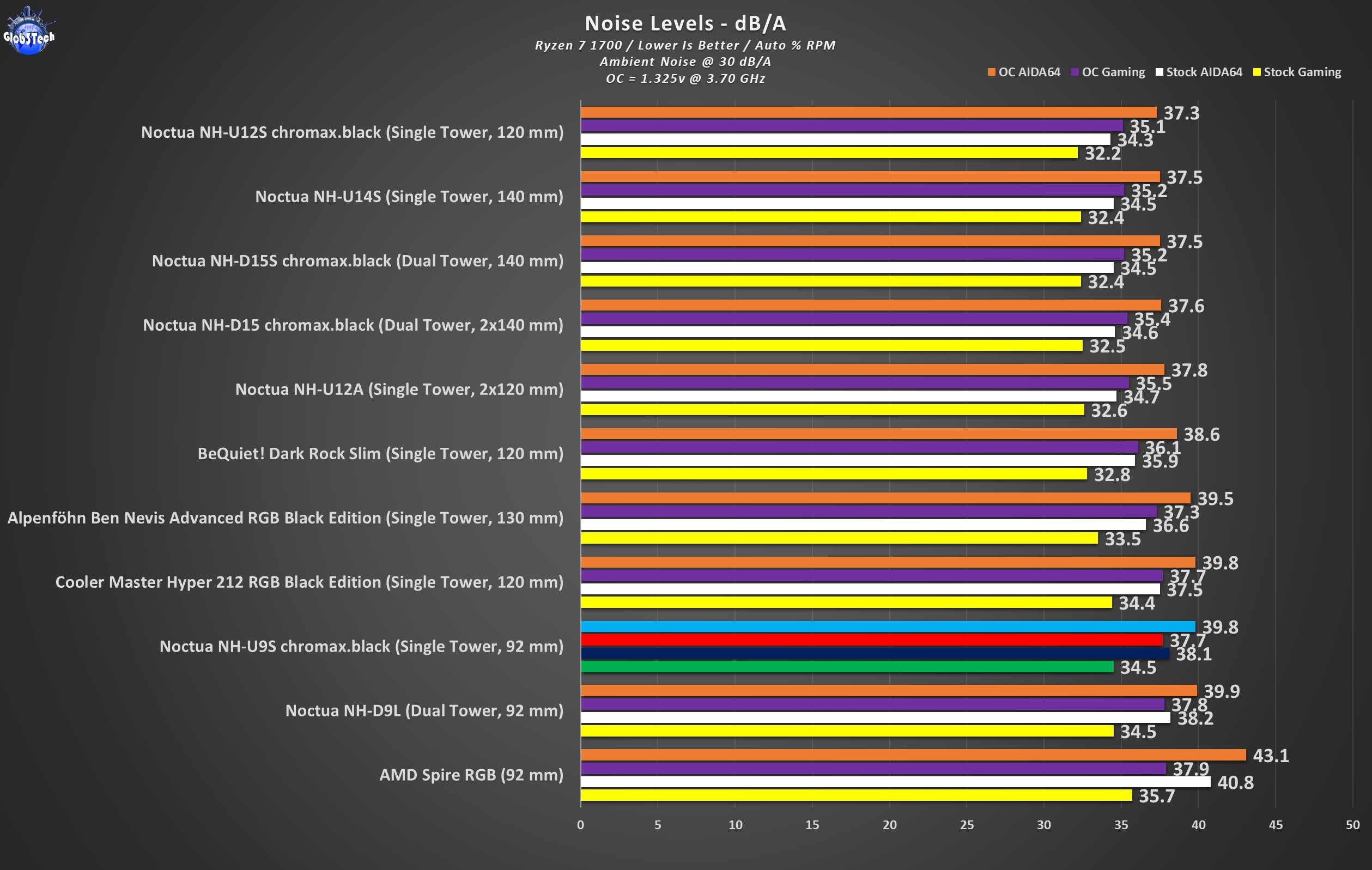 We put the U9S straight in the battle arena along side all of the big boys and only compared it to the stock Spire AMD 92 mm CPP cooler and the D9L as the only ones in the same category per say from our inventory and the U9S even managed to beat statistically some low RPM single tower 120 mm CPU coolers. This speaks volumes at a small penalty of noise increase which is understandable with small frame sizes fans.

It is a very well known fact that the original U9S is one of the best 92 mm single tower CPU coolers out there and today we (re)confirmed just that, but in black. It’s such an efficient and potent little cooler given its small footprint that it’s the go-to-choice to anybody looking for a heatsink under 130 mm that will guarantee zero headaches regarding RAM, VRM and GPU compatibility all around the socket area. This is meant for small form factor machines so it’s understandable that you will not get it to overclock your CPU, despite our great results today even in an unusual low ambient temps scenario but this is a clear upgrade over the stock AMD low tier coolers and if the space permits, a clear choice over the L9a/i.

– Pricey but at these quality tiers levels, you get what you pay for

Glob3trotters “Gold Standard” Award – 5 out of 5

Many thanks to Noctua for supplying us with this cute thing !