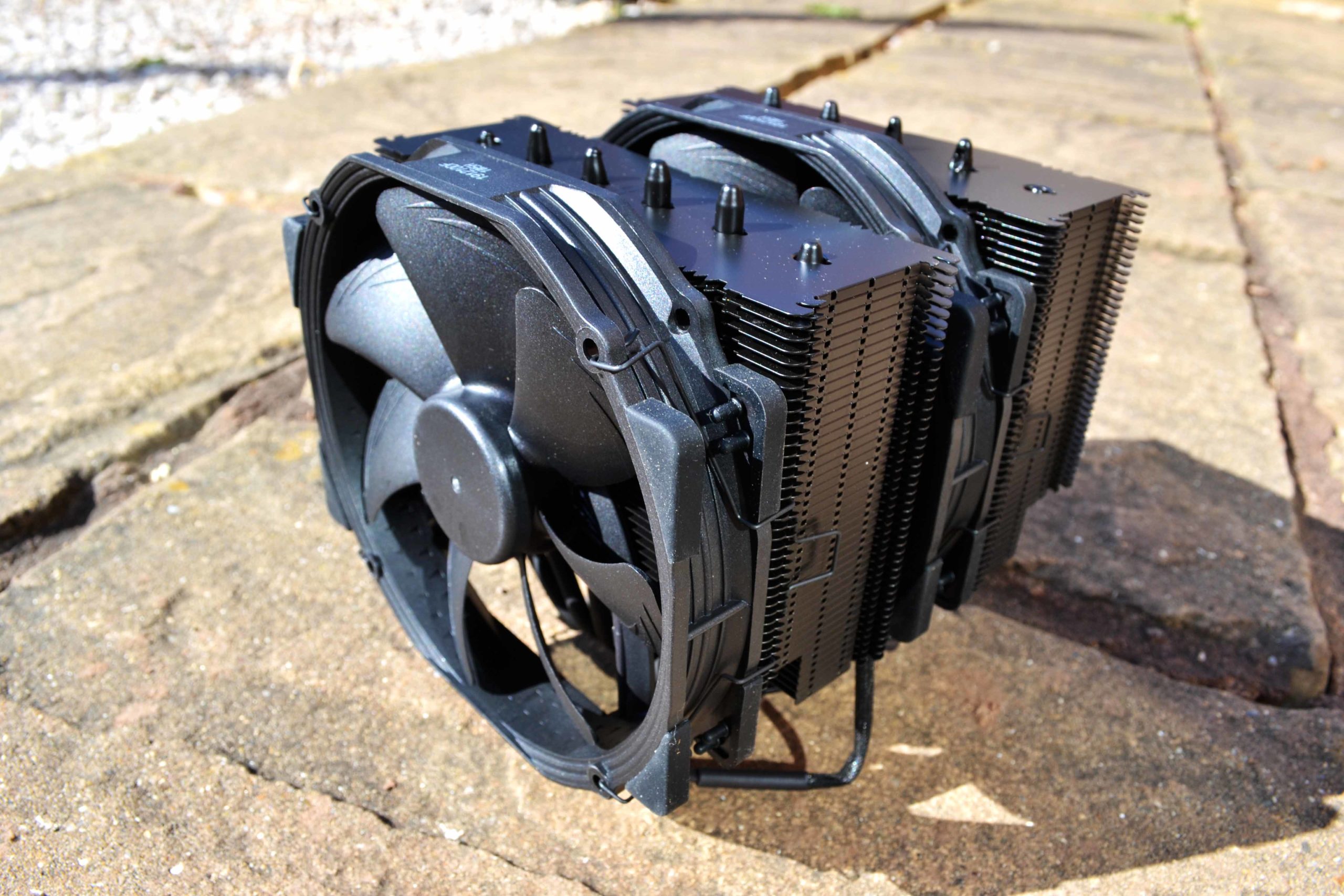 This is the air cooler to rule them all. Before the D15 appeared, we had its first variant, the NH-D14 which was released in 2009. The main design hasn’t changed much besides the obvious chromax.black treatment and some upgrades regarding better compatibility with RAM height. A decade later the main formula is still very successful – maximum heat dissipation divided by two heatsinks and two big 140 mm fans. This thing is so successful that it will give 240 mm AIOs a headache! So let’s have a look at the most powerful air cooler that we have ever tested !

We all know that Noctua products are never cheap but you always get what you pay for. At $100 / £90 / €100, yes, it is a lot to pay if you just want to have the black paint job over the classic color scheme, especially if you already own the regular D15 (which is $10 cheaper). However, as a new buyer, you can’t go wrong with either but for just $10 extra the new chromax.black D15 looks like an absolute unit! 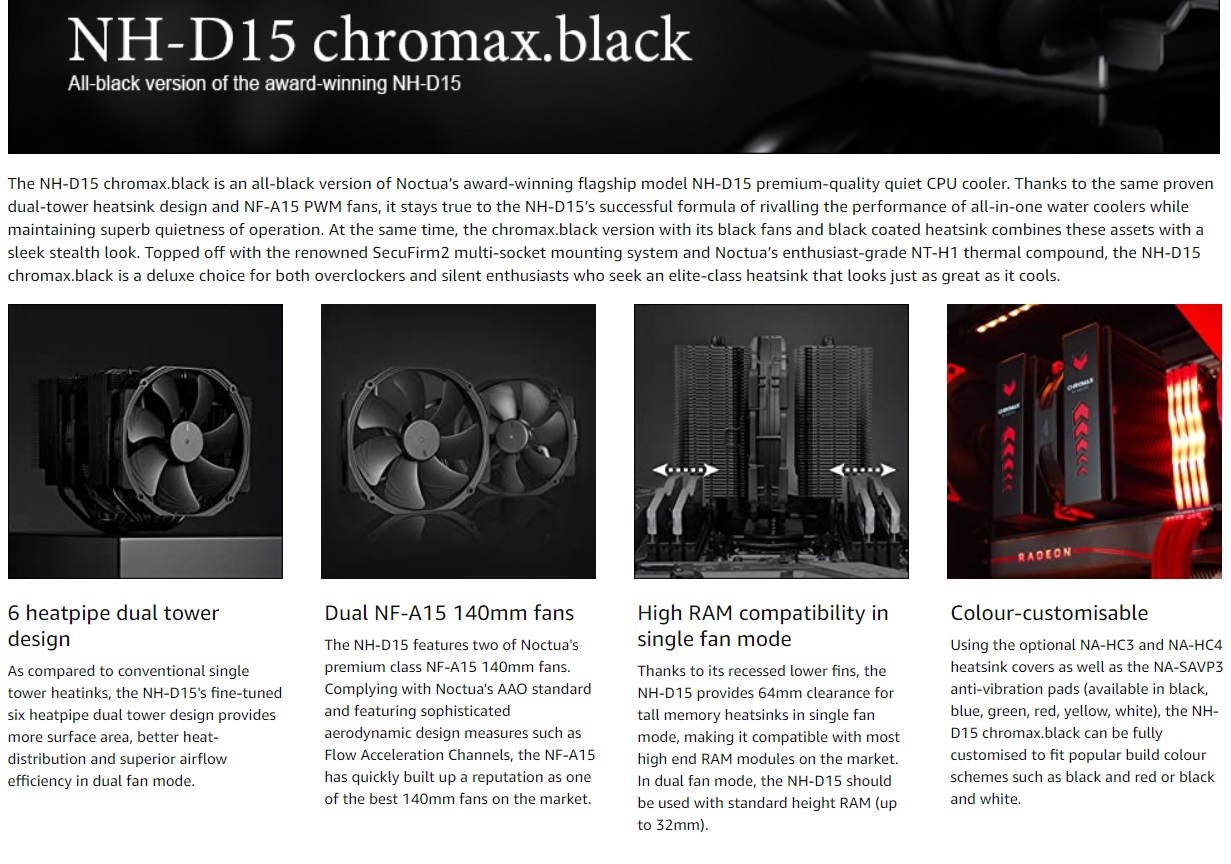 Despite its massive size and specs, it is actually not that heavy. To point out that with both fans attached, you need standard height RAM (32 mm tall) but with one fan, you have up to 64 mm free since the heatsink has a part of the fins recessed. With 6 years warranty, 2x 140 PWM premium fans and epic build quality, this is as good as it gets on paper.

The Noctua NH-D15 chromax.black comes shipped in one of the biggest boxes I have seen for air coolers. As previously seen in the U12S and L9i/a chromax.black, we have an identical box design and presentation. 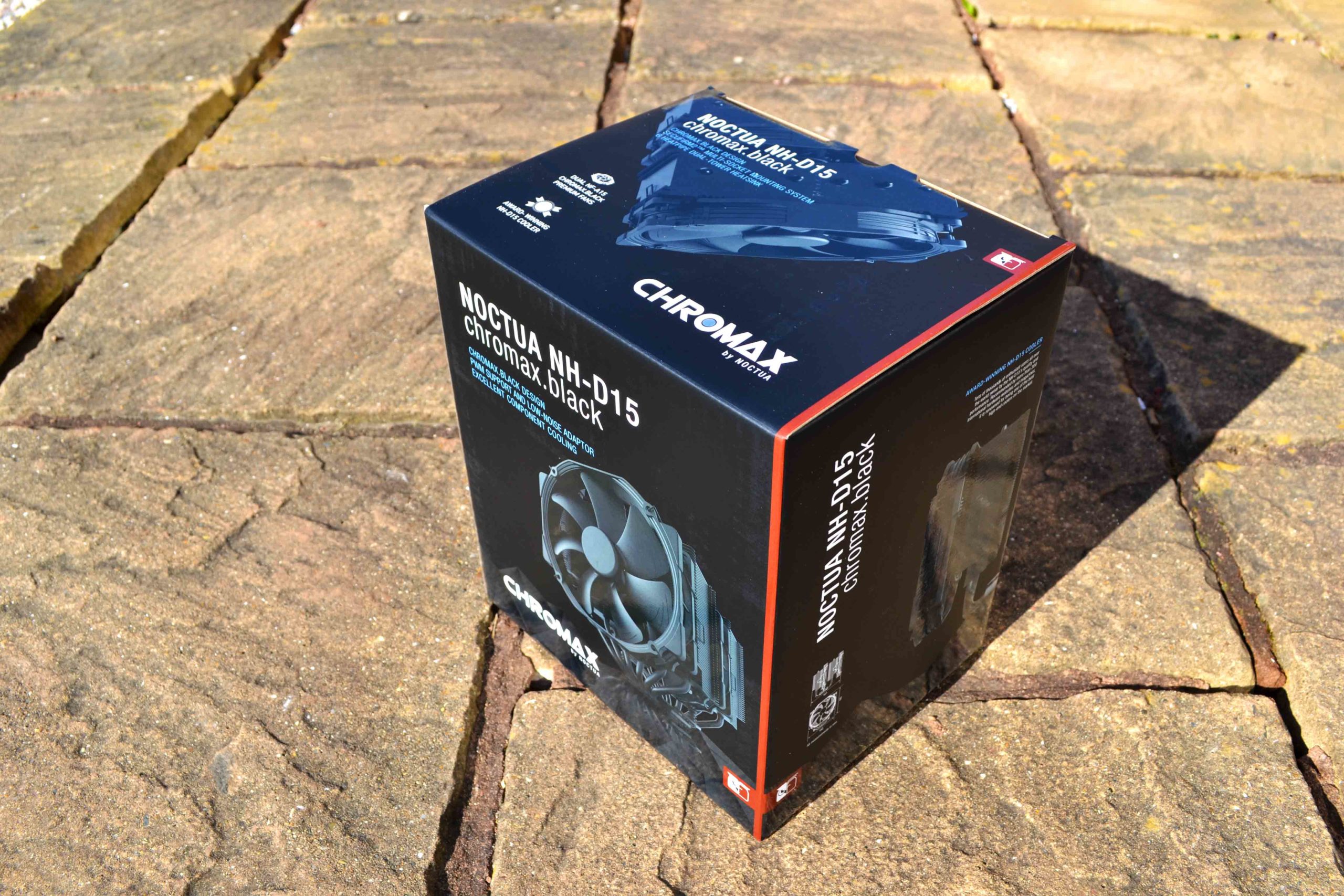 The front has a visual depiction of the actual heatsink with bold branding. 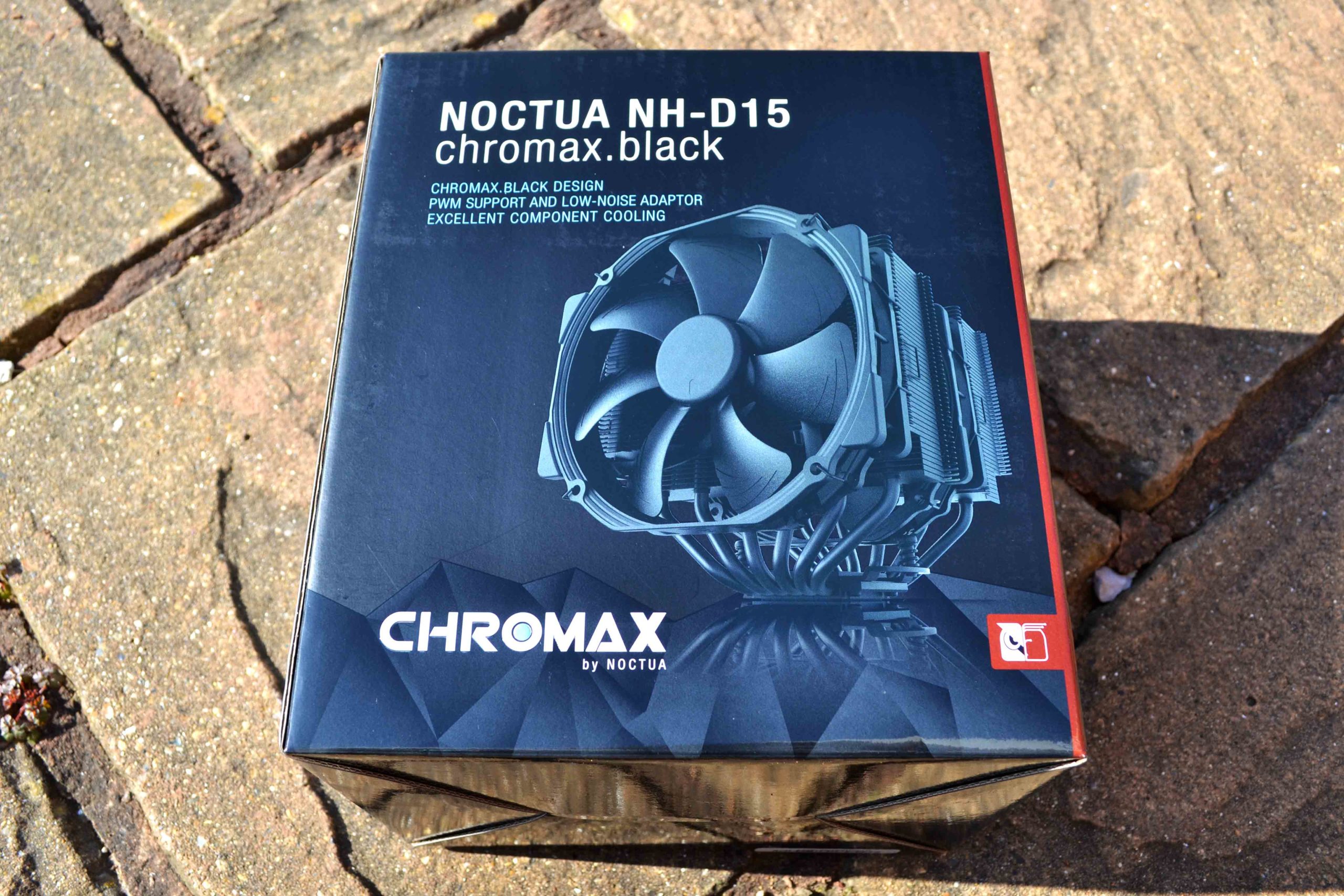 On the back we have an in-depth presentation of the main selling points of the Noctua NH-D15 chromax.black. 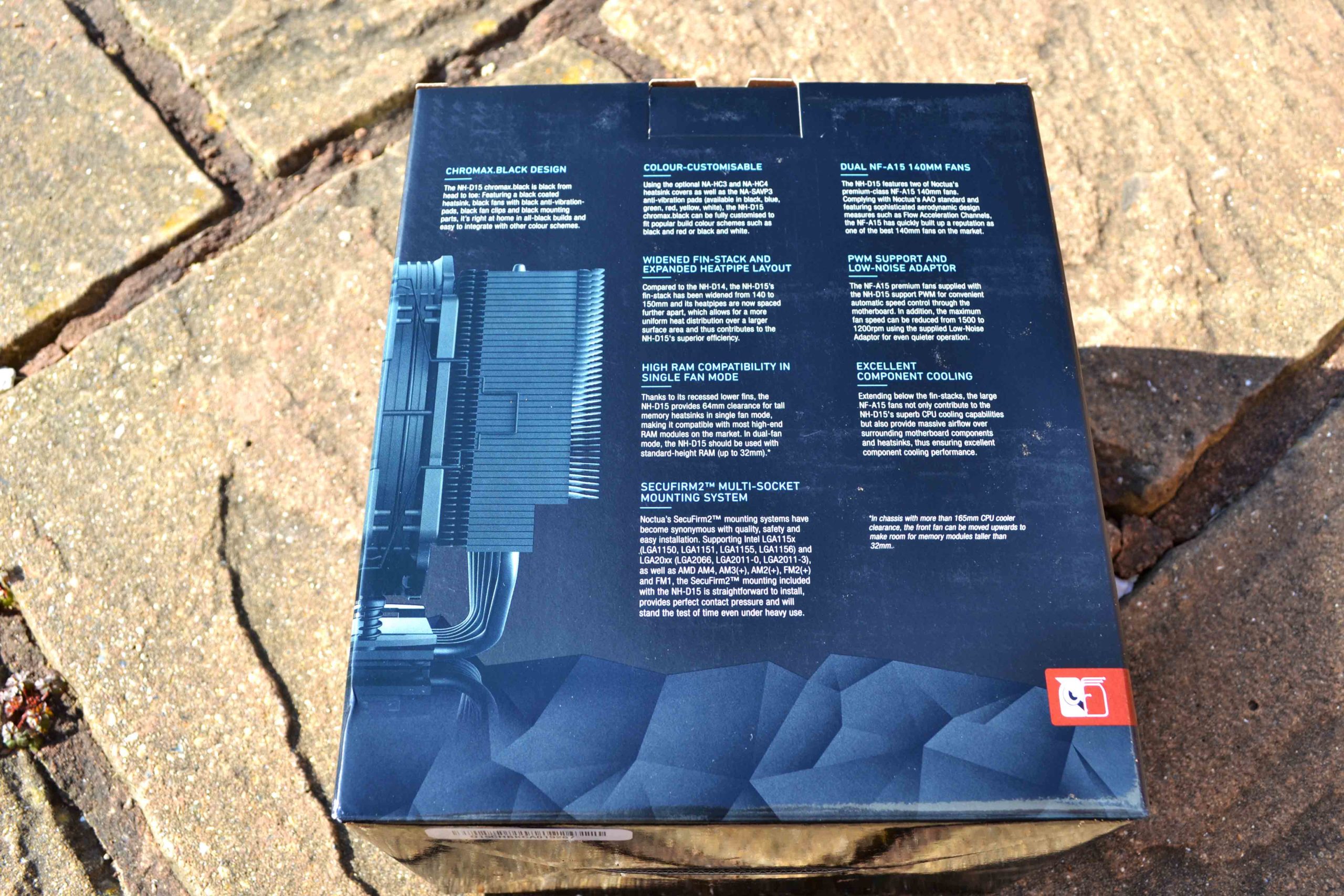 Then the specs for the heatsink and fans are printed on one of the sides. 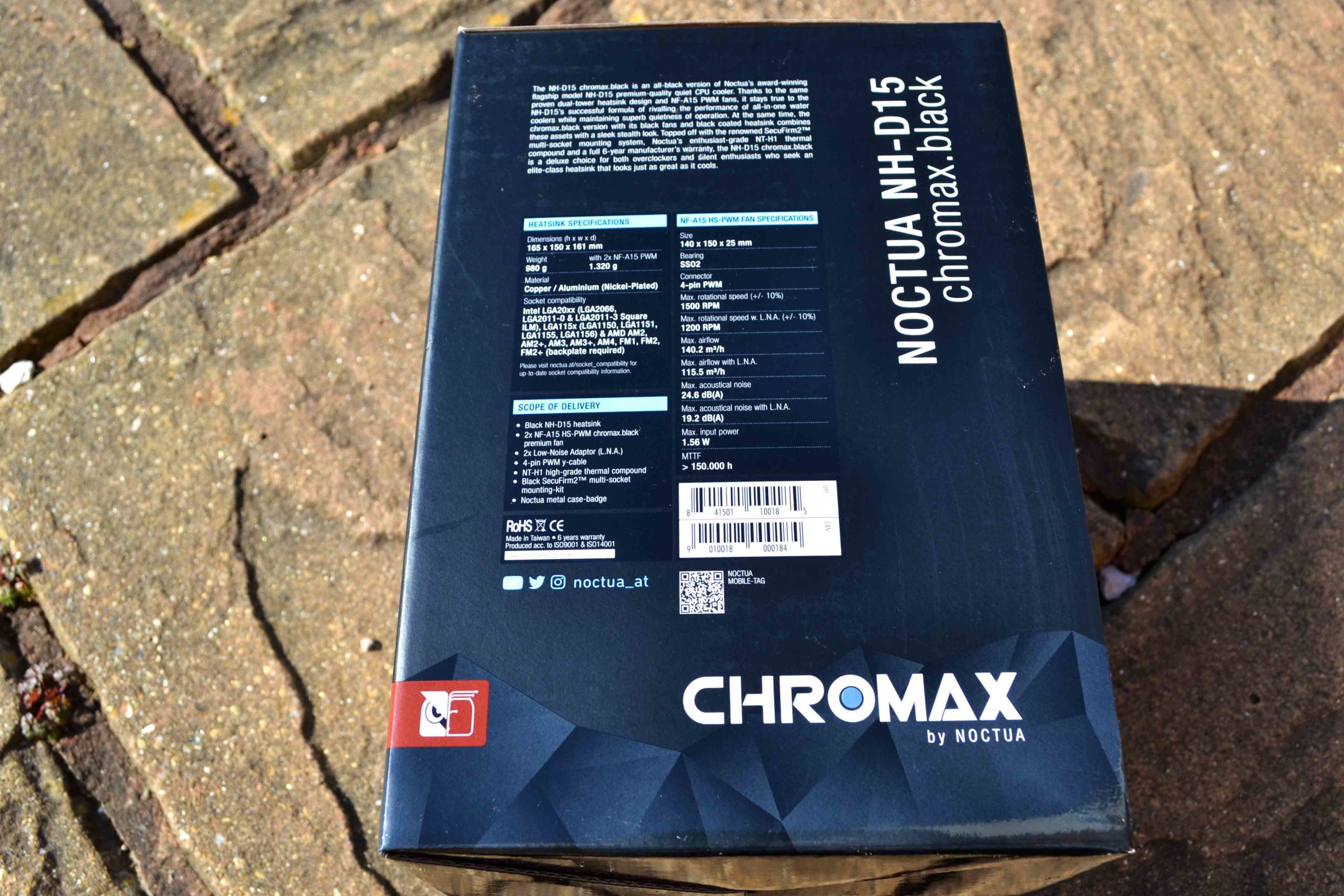 The accessory box greets us with a very helpful list of its contents. 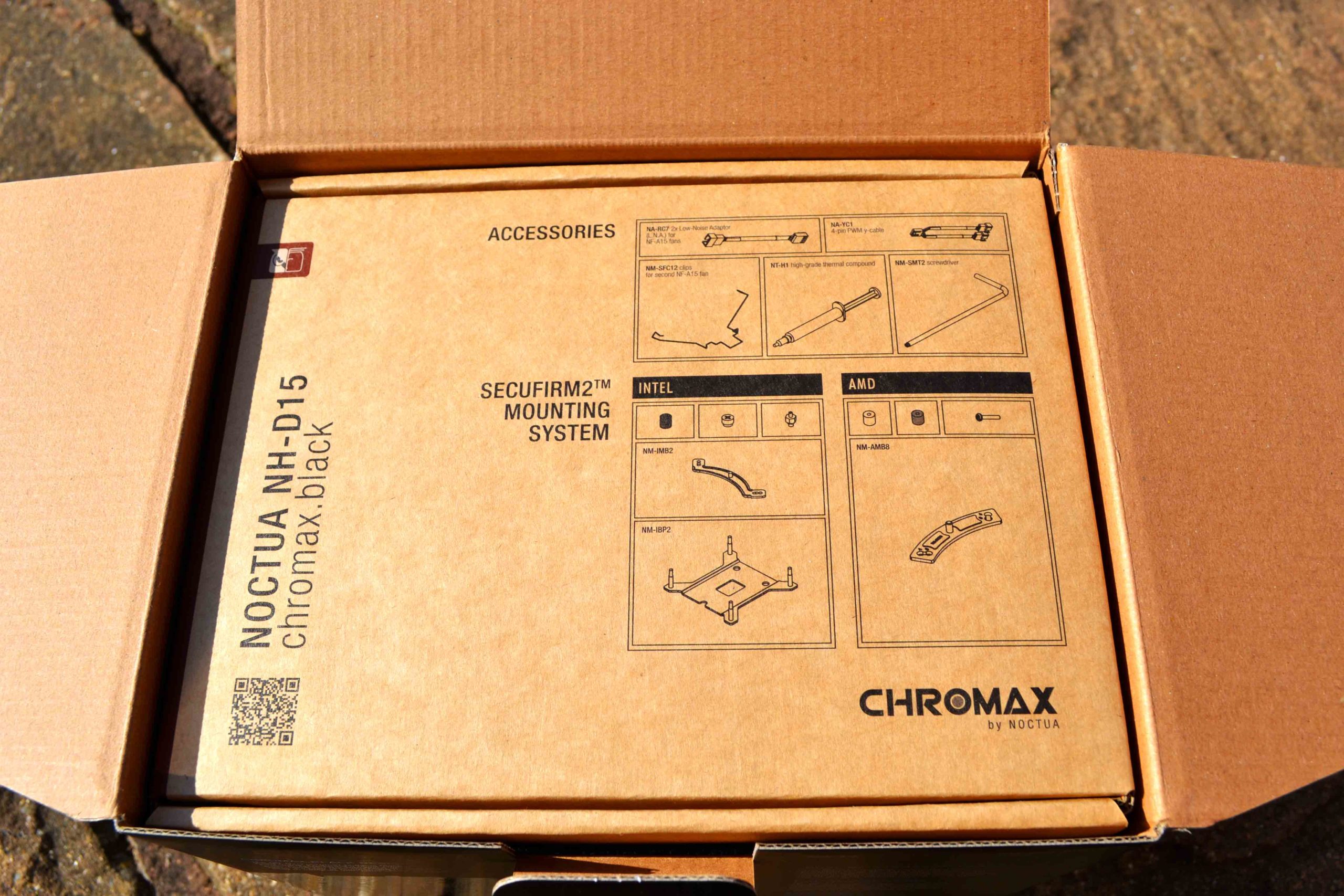 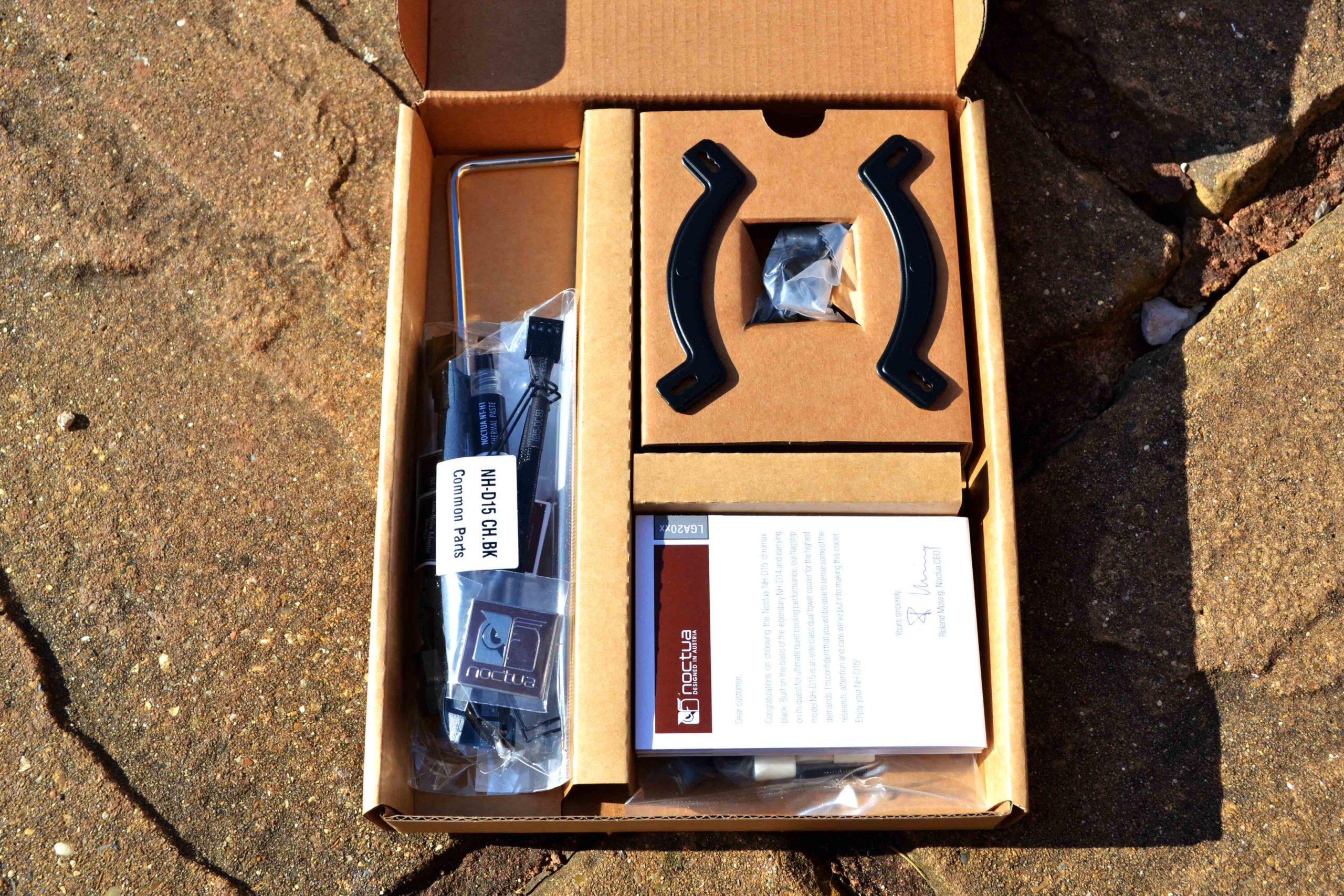 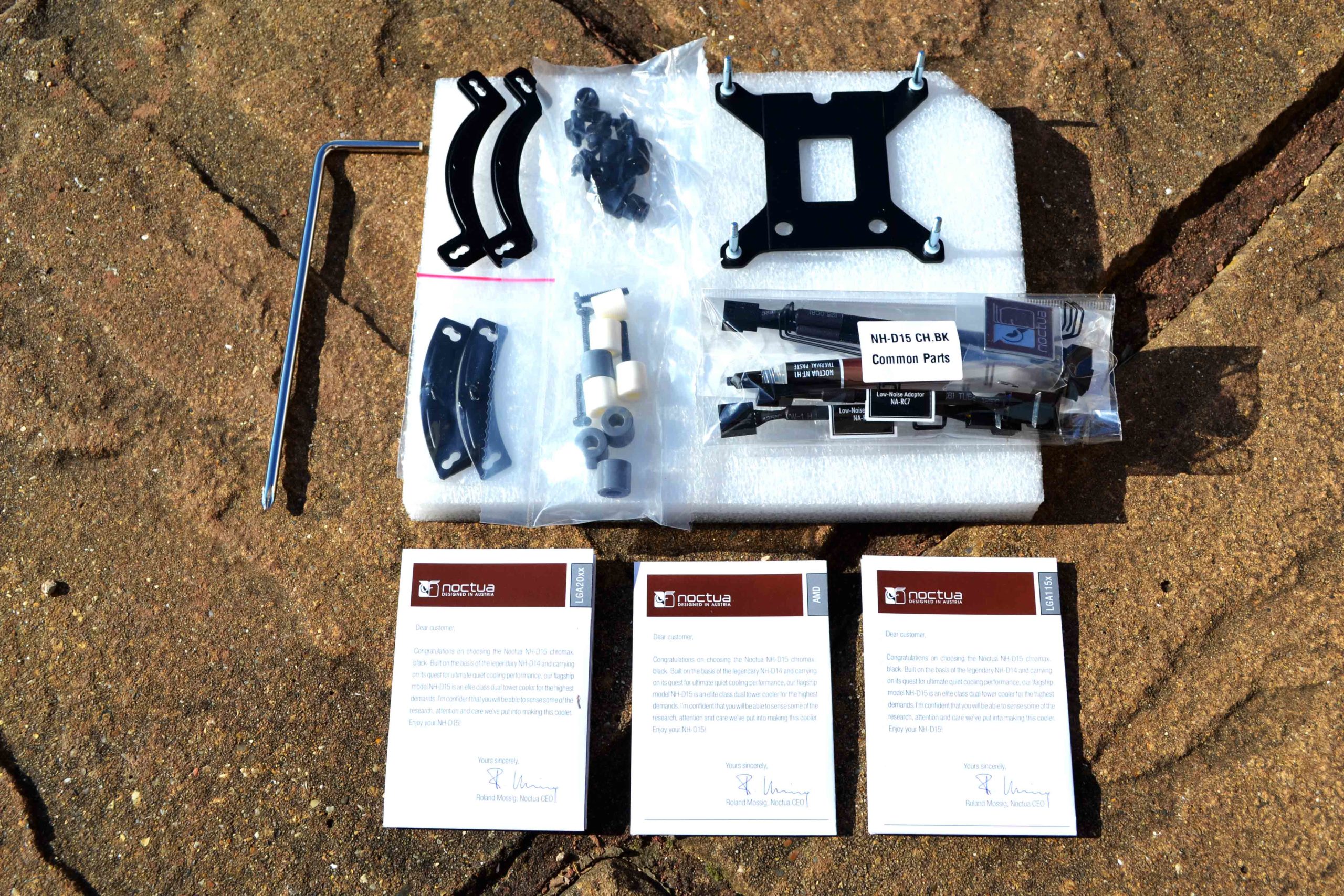 After removing the first box, we have two more boxes underneath. One has the second 140 mm fan and the other has the NH-D15’s heatsink, thus the product is perfectly safe from every side. Remember when I mentioned that with Noctua you get what you pay for? Just take a look at the attention that the packaging receives and bear in mind that we haven’t even got to the product itself. 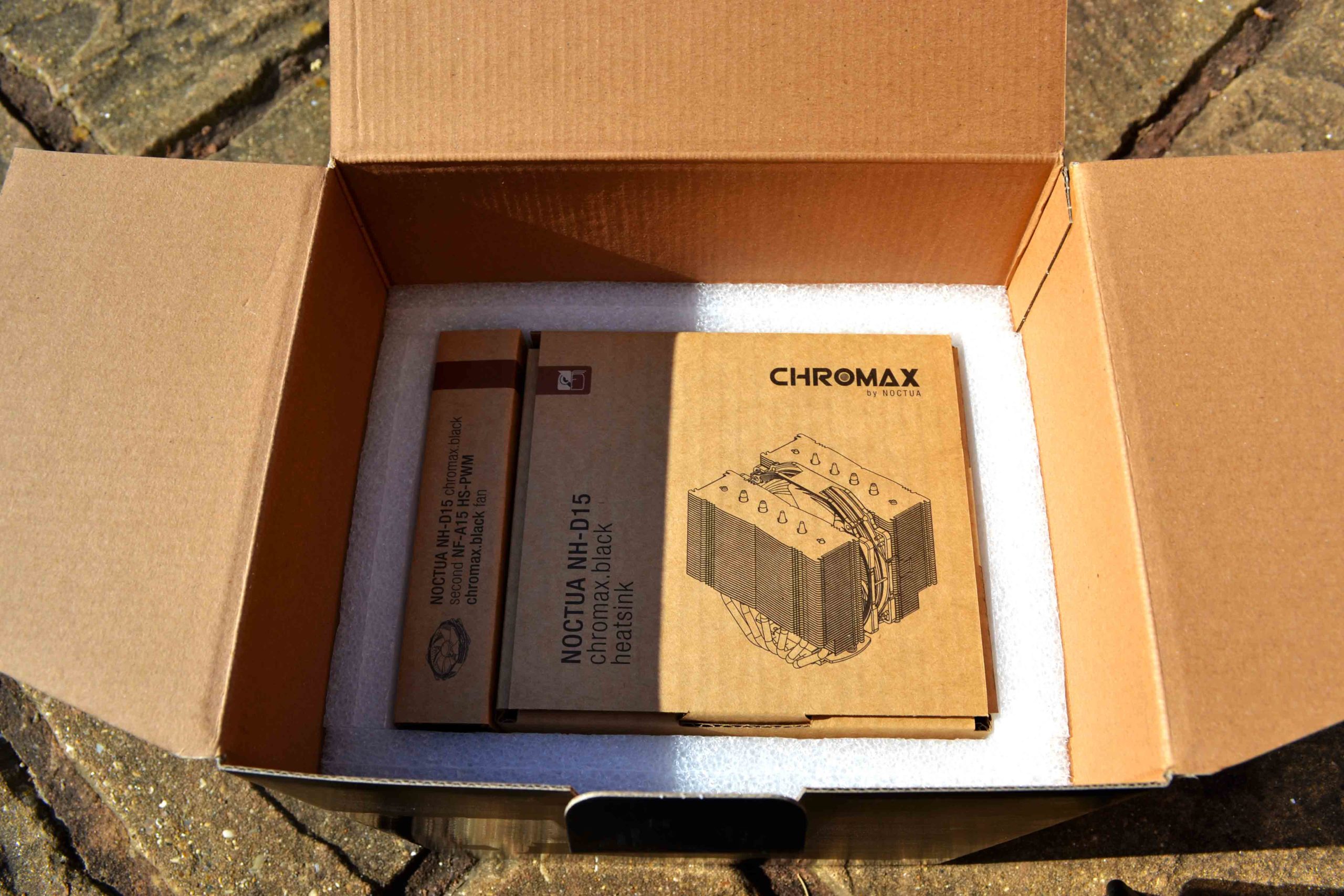 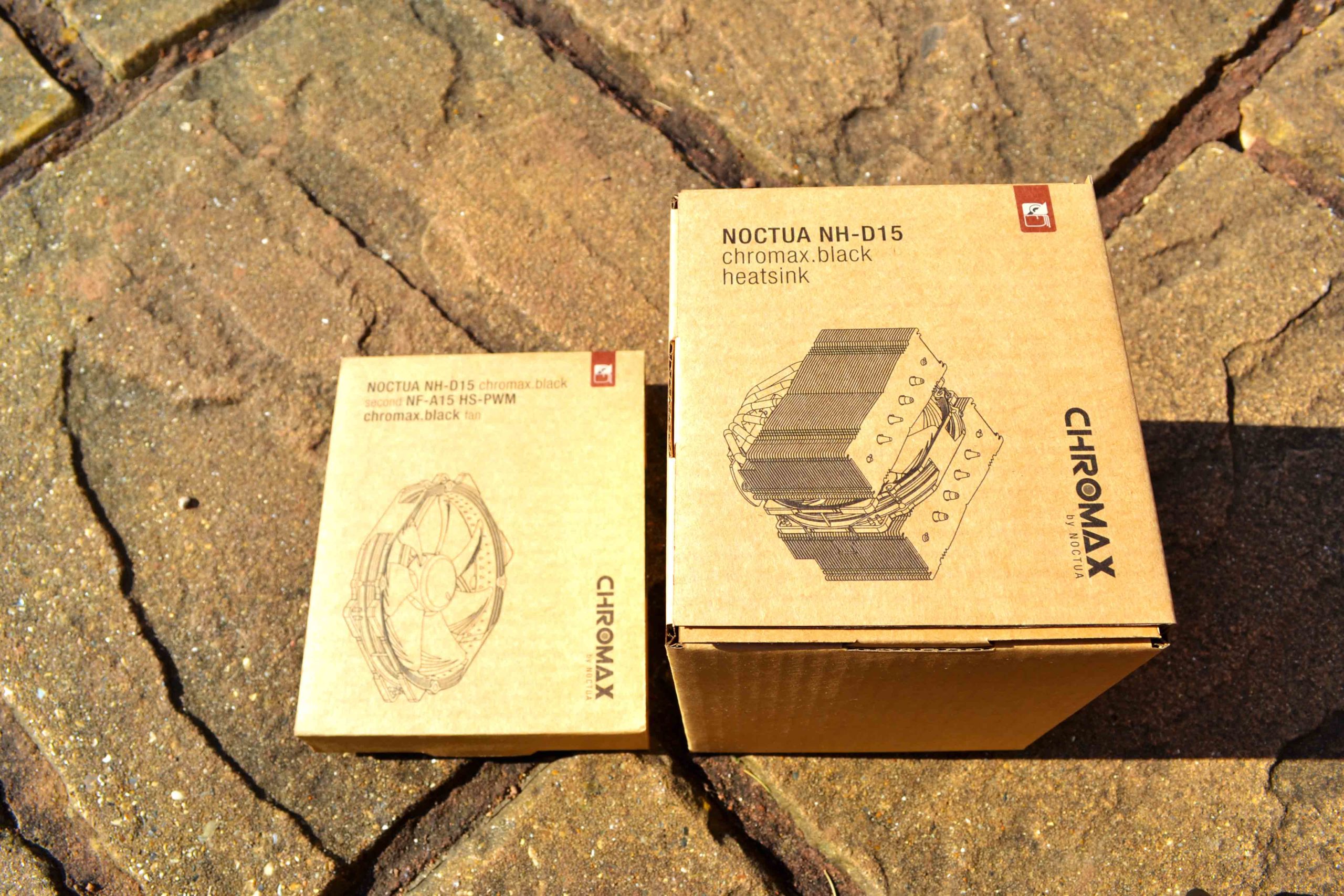 The NF-A15 HS-PWM chromax.black fans have 120 mm mounting holes and are rated up to 1500 RPM, developing 140,2 m³/h of airflow and have a maximum noise output of 24,6 dB(A). They even have removable anti-vibration pads which you can choose your own color from their chromax range. 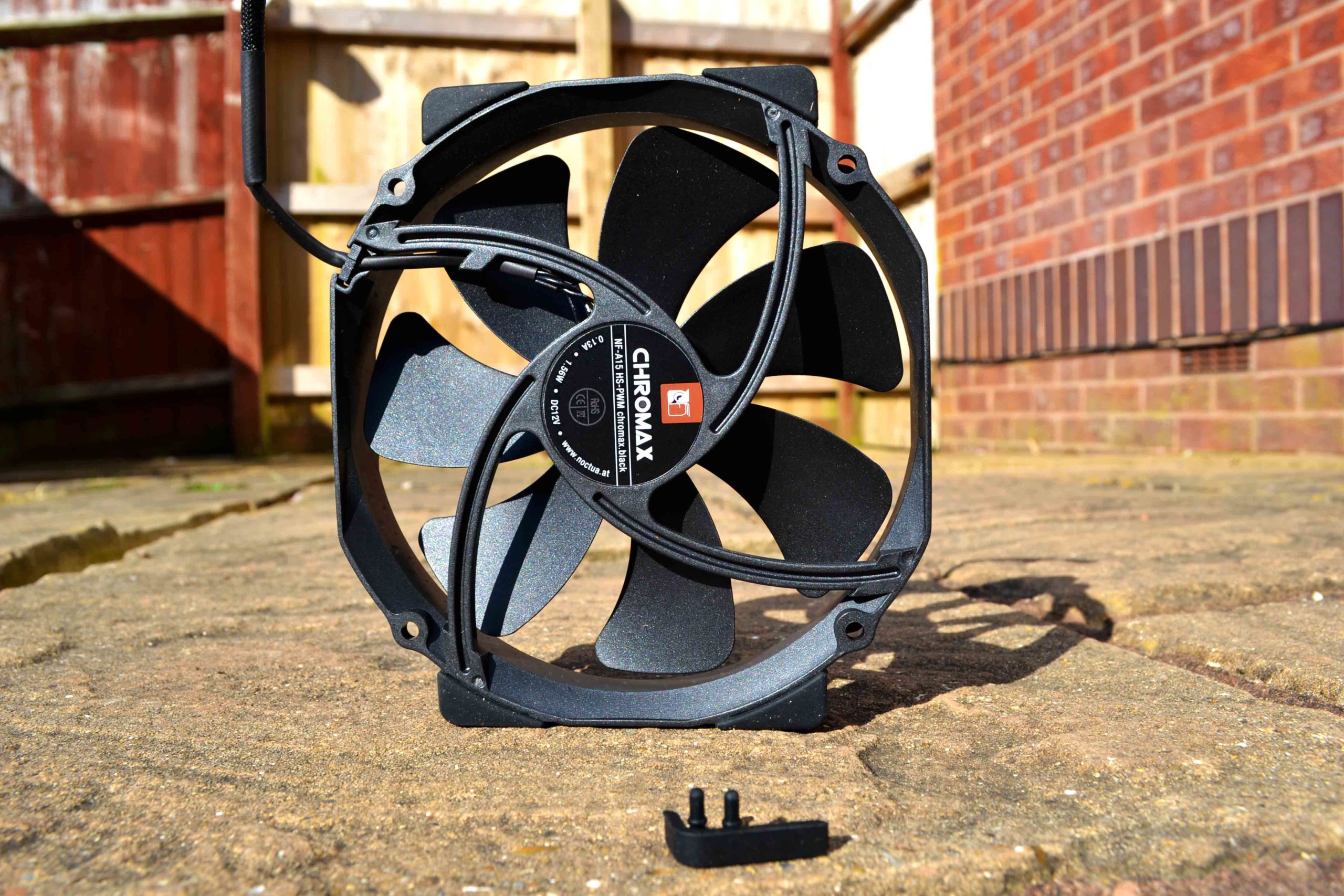 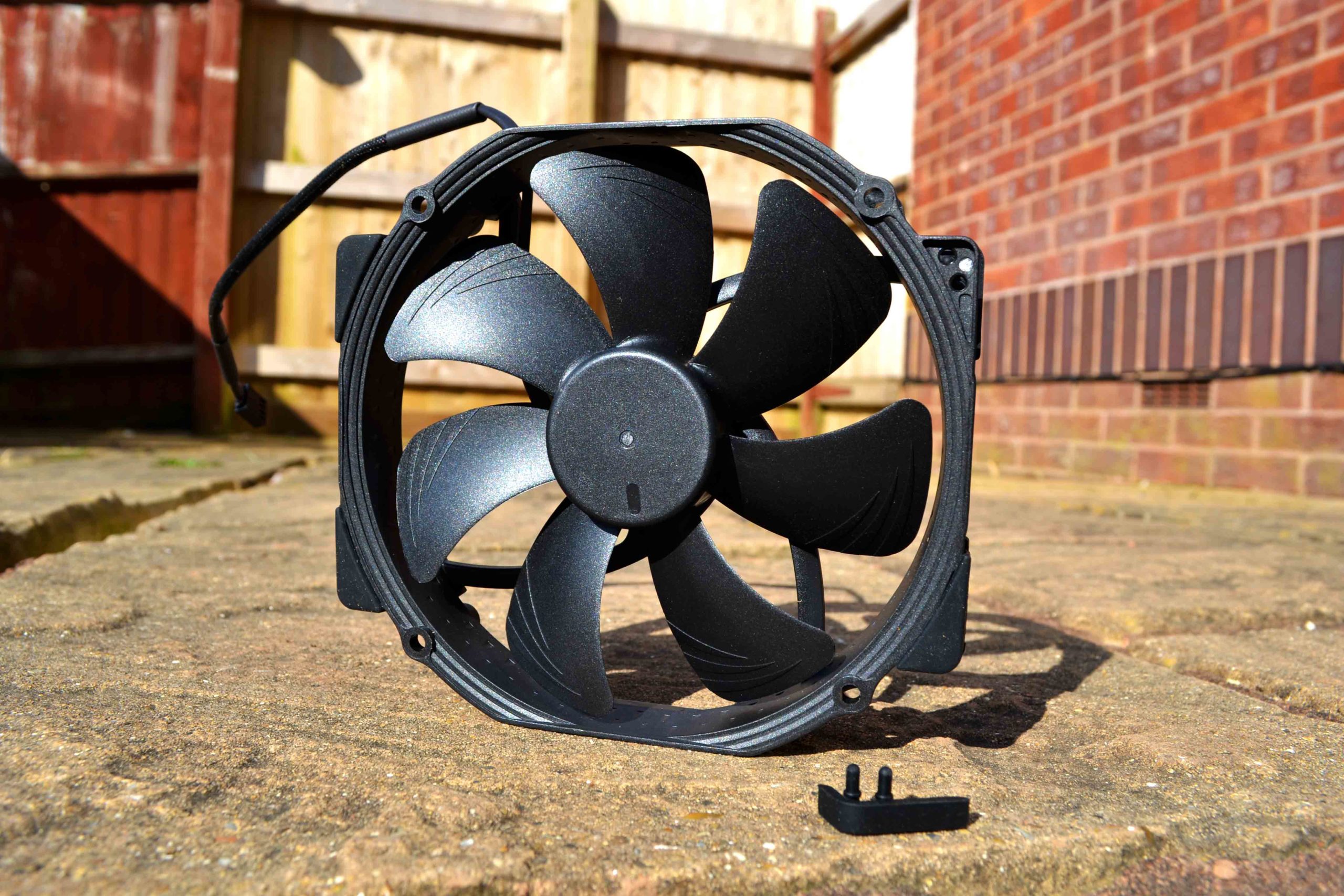 Here is the beast out of its cage. 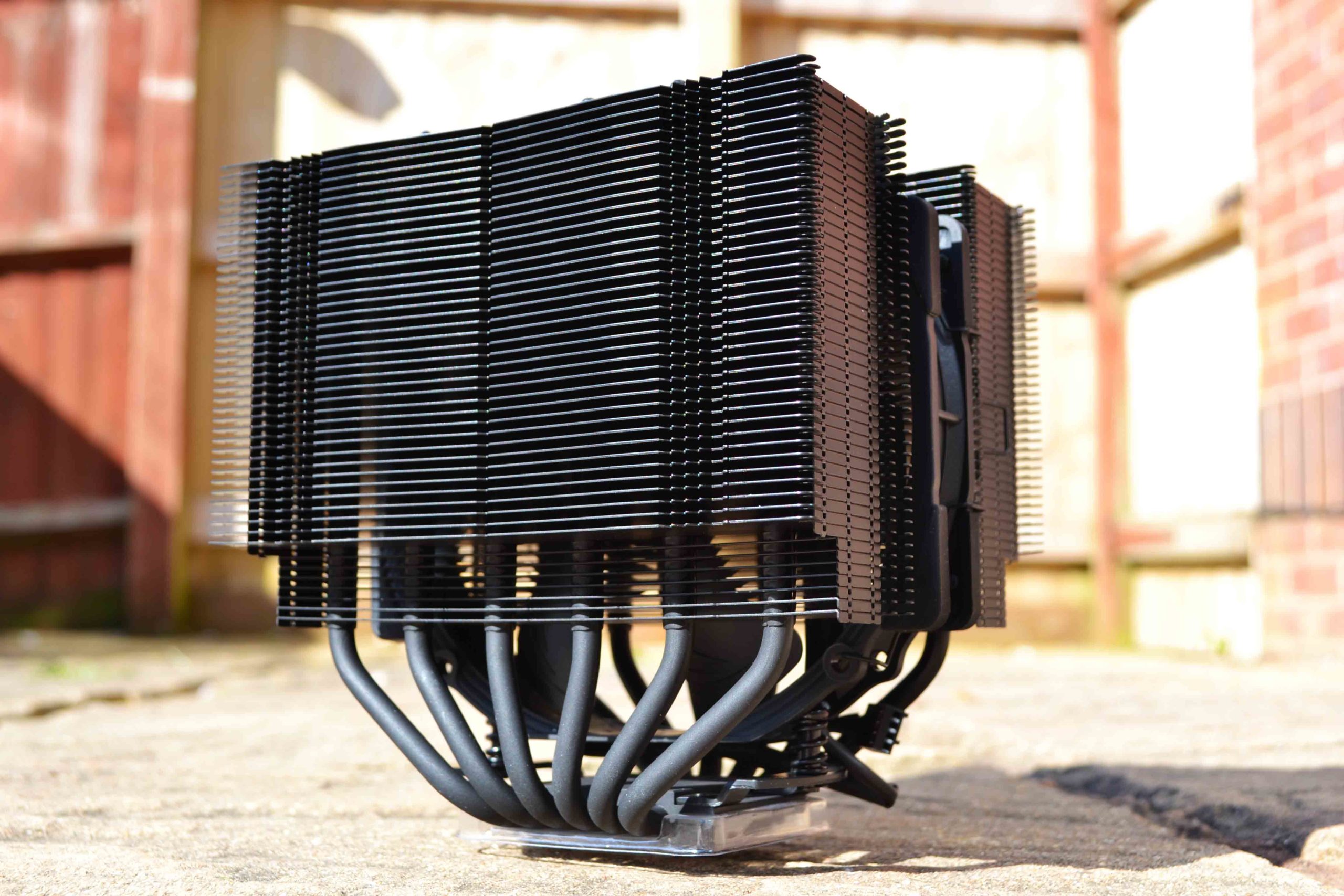 For a size perspective, when compared to the U12S (a single tower 120 mm heatsink) we can see almost 3 times the size in depth in favor of the NH-D15. 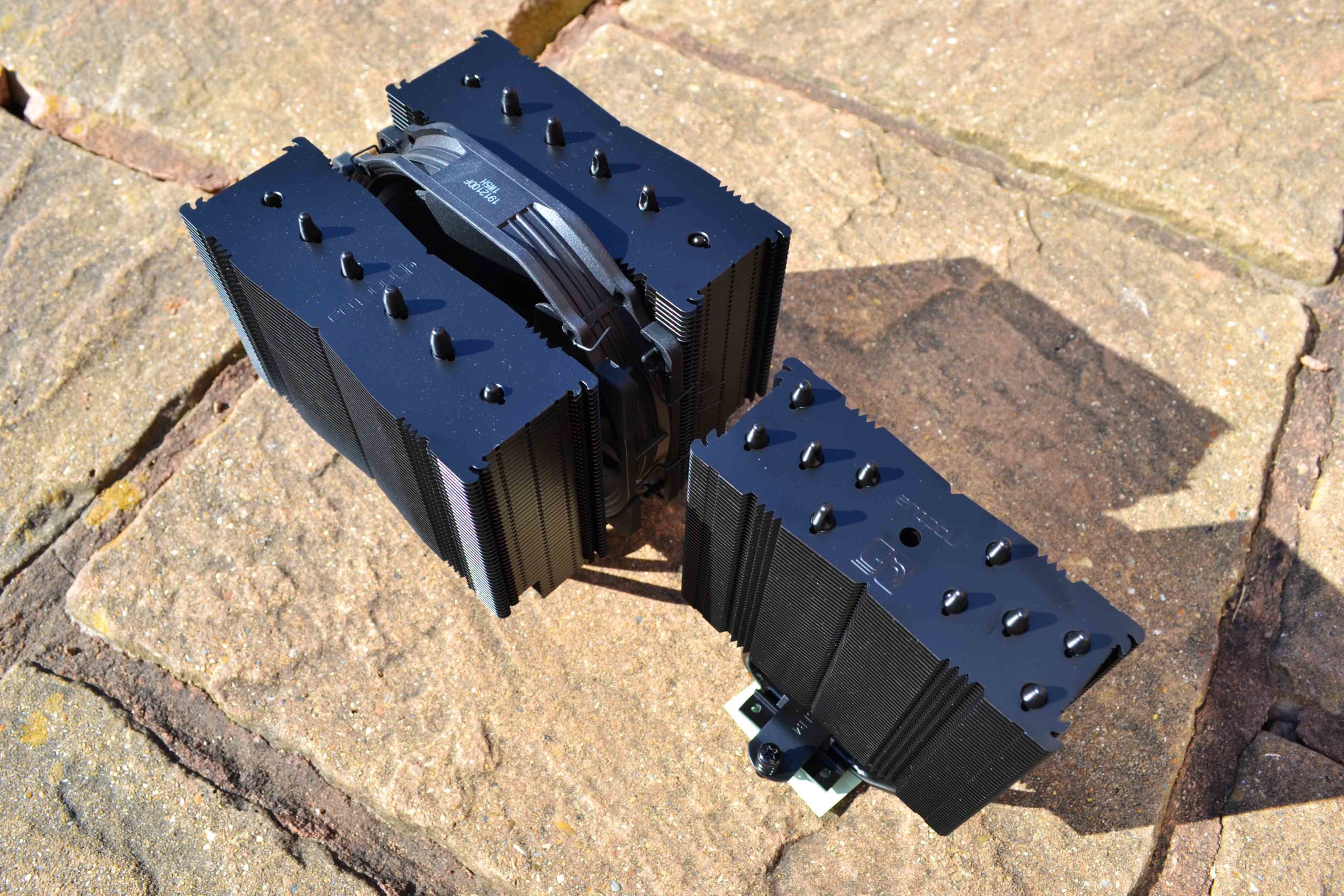 The heatsink stands 160mm tall, 150mm wide and 135mm long while weighing 980g alone and 1150g with one of the two NF-A15 chromax.black fans mounted. In this configuration – single-fan mode – you have the maximum RAM height clearance, since the bottom 7/45 aluminum fins per tower, are reduced in height. 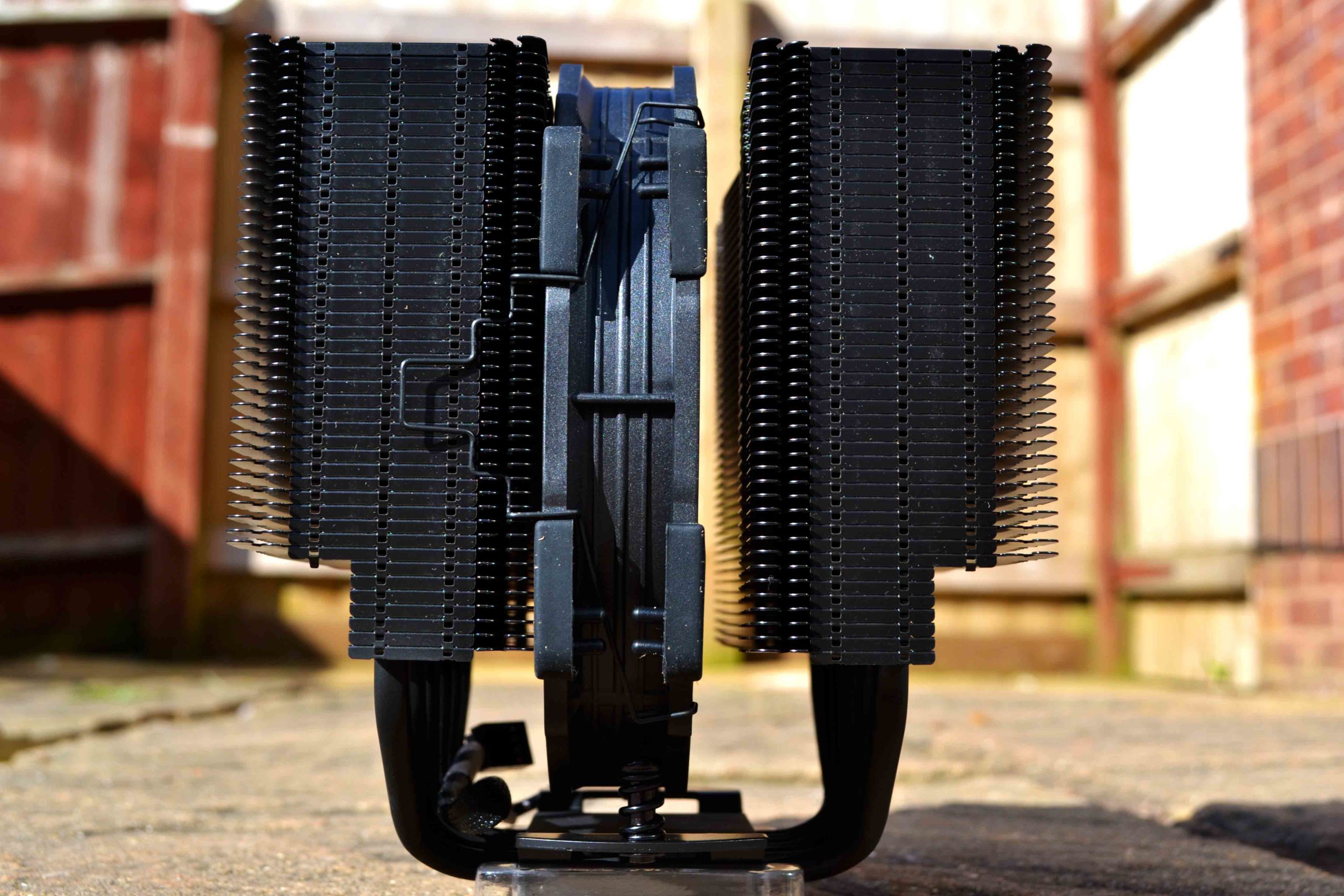 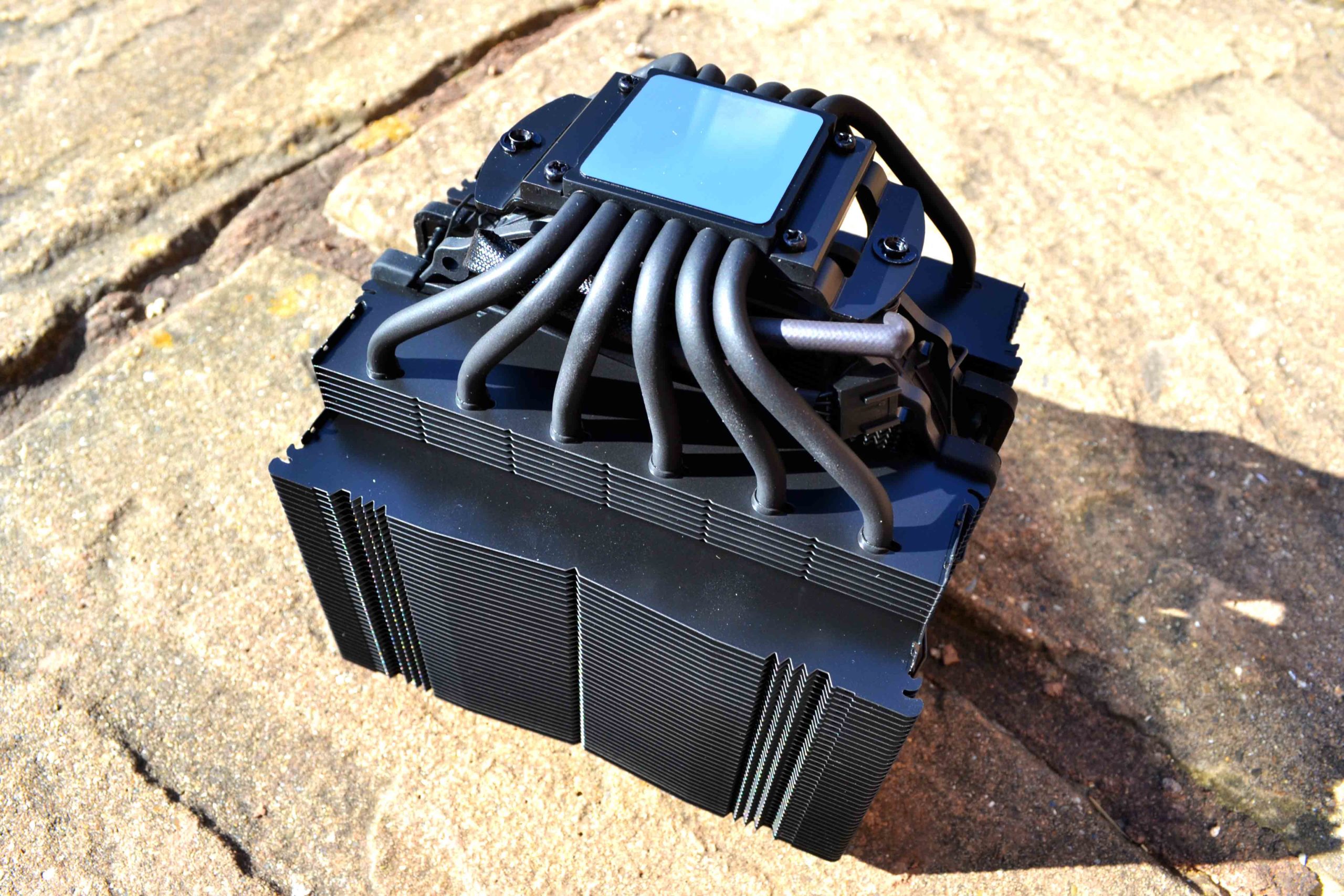 Things are almost identical with the NH-U12S in terms of the installation process. This time we have the AMD AM4 socket to tackle but everything is straightforward. We need to reuse the stock AM4 backplate that comes with any AMD motherboard. Then attach these plastic grey spacers. 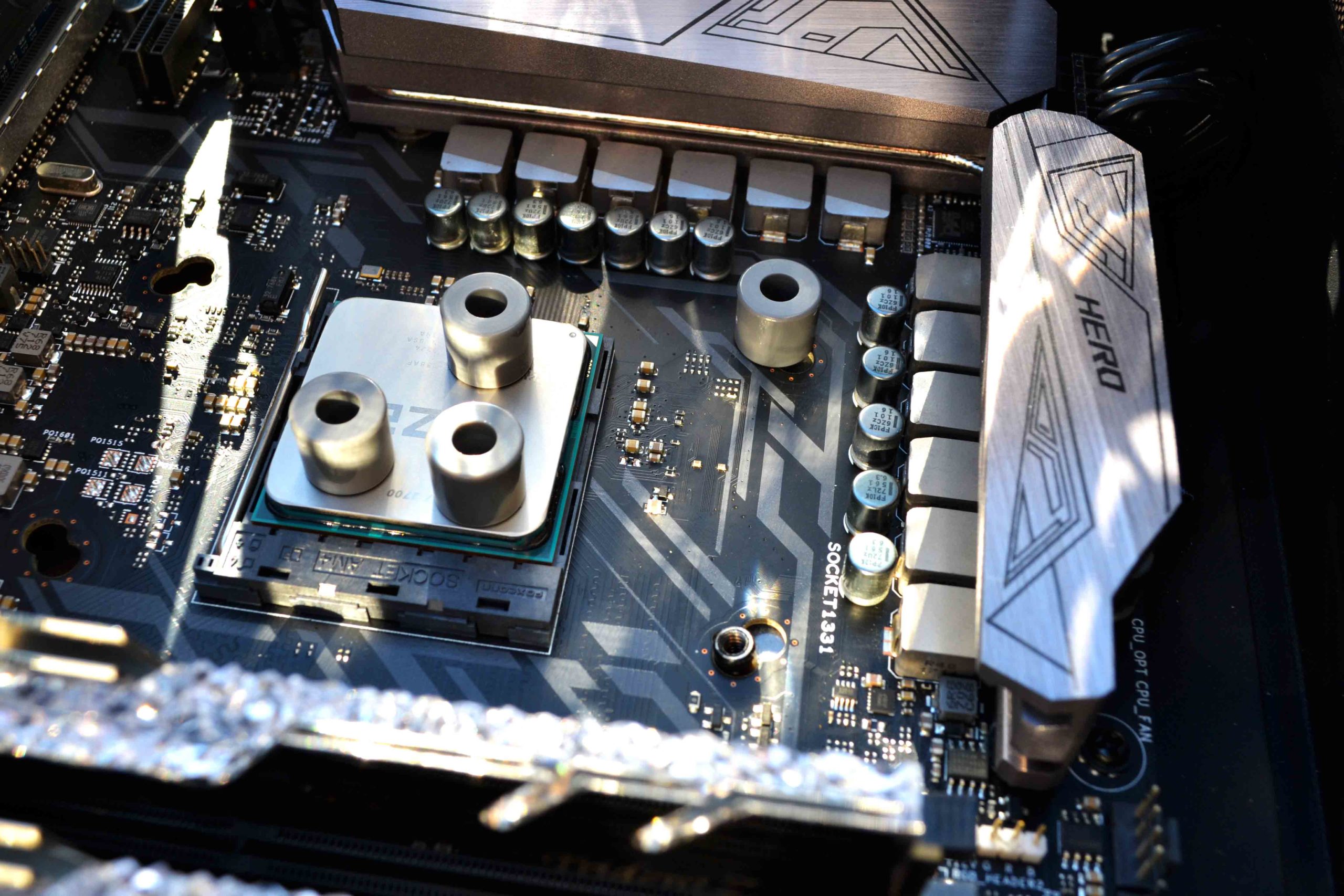 Make sure you screw down the AMD brackets in the nr.’4′ spacing written on them. 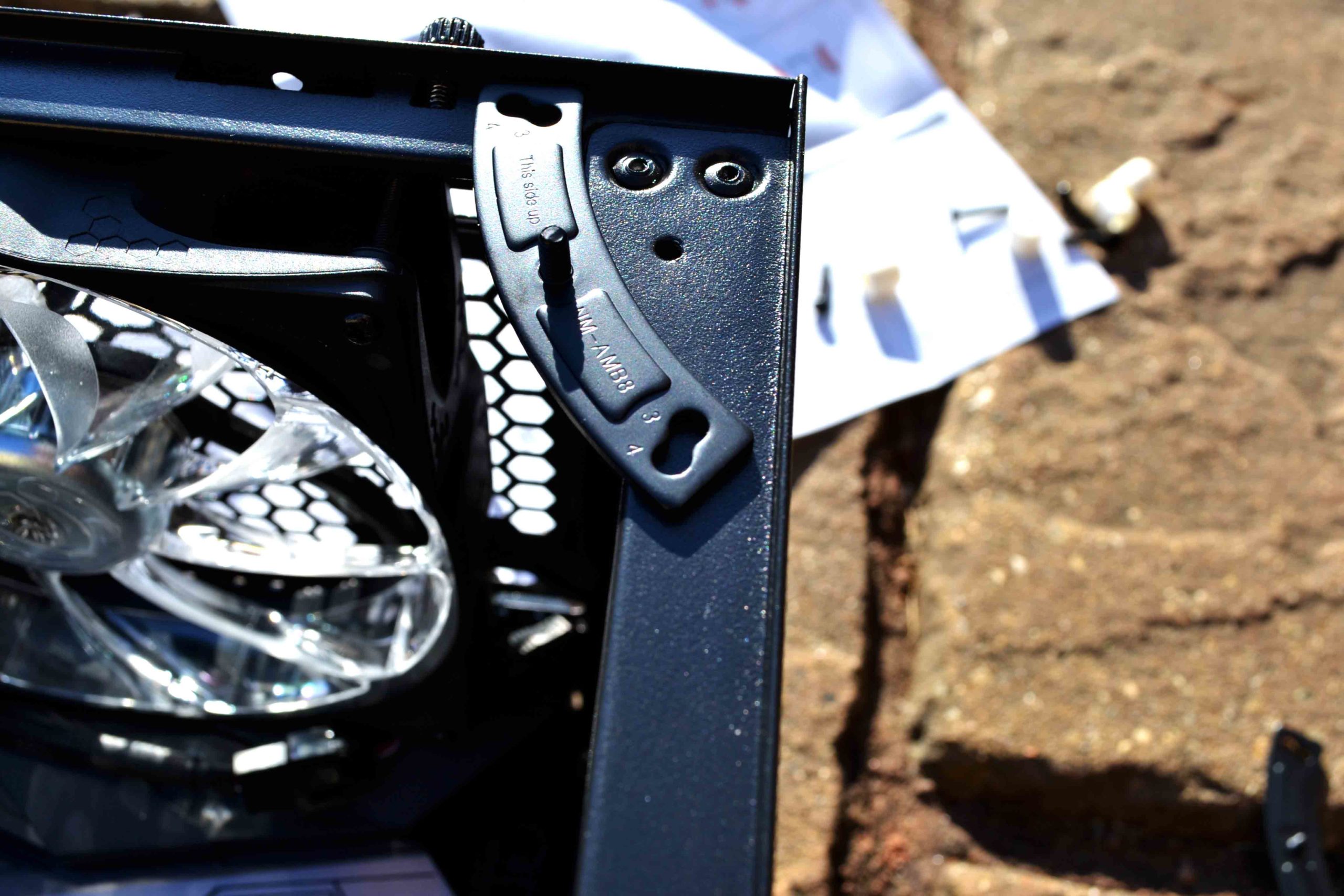 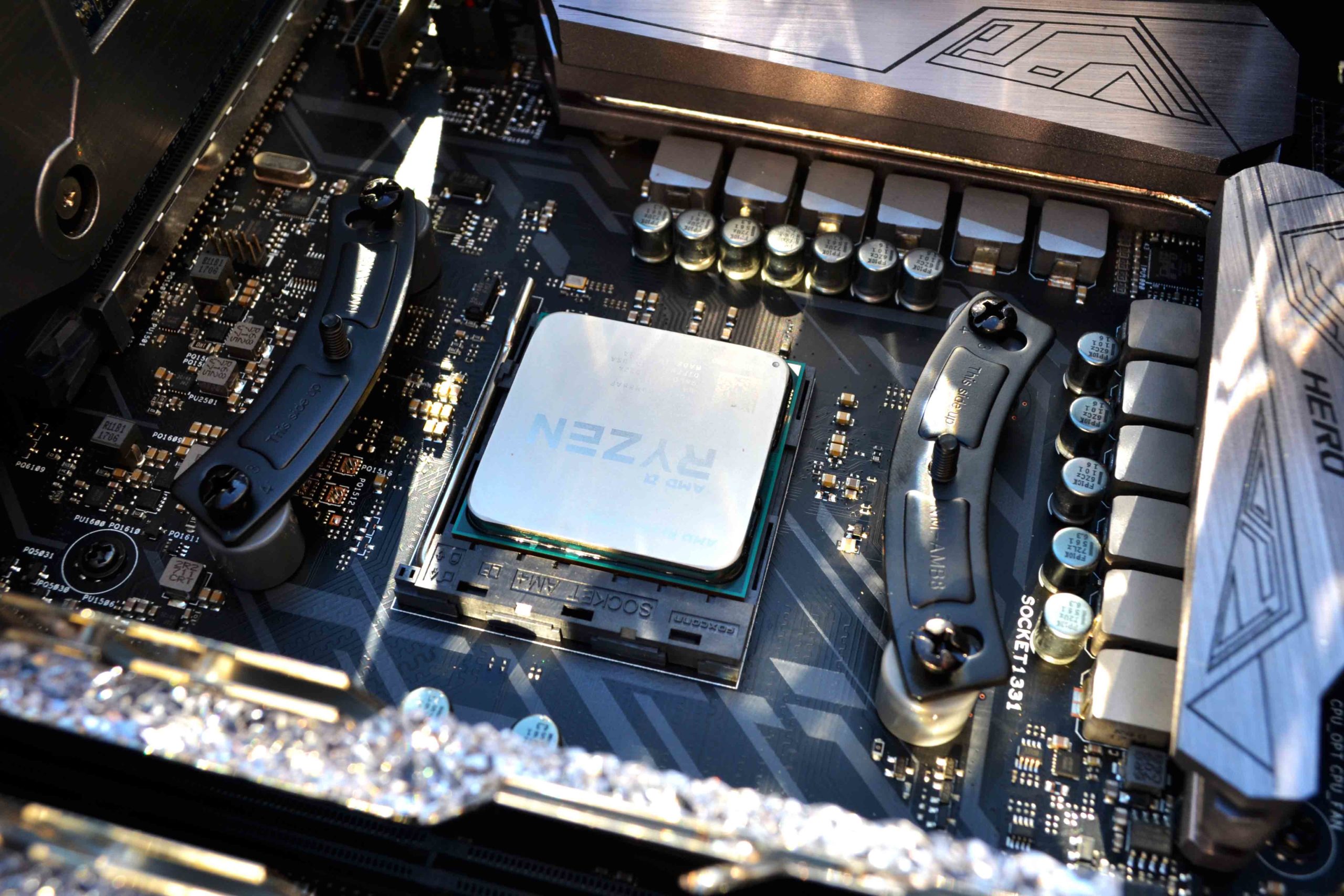 Apply the thermal paste and remove the middle fan from the heatsink since you will need a clear path to secure the D15 to the brackets. 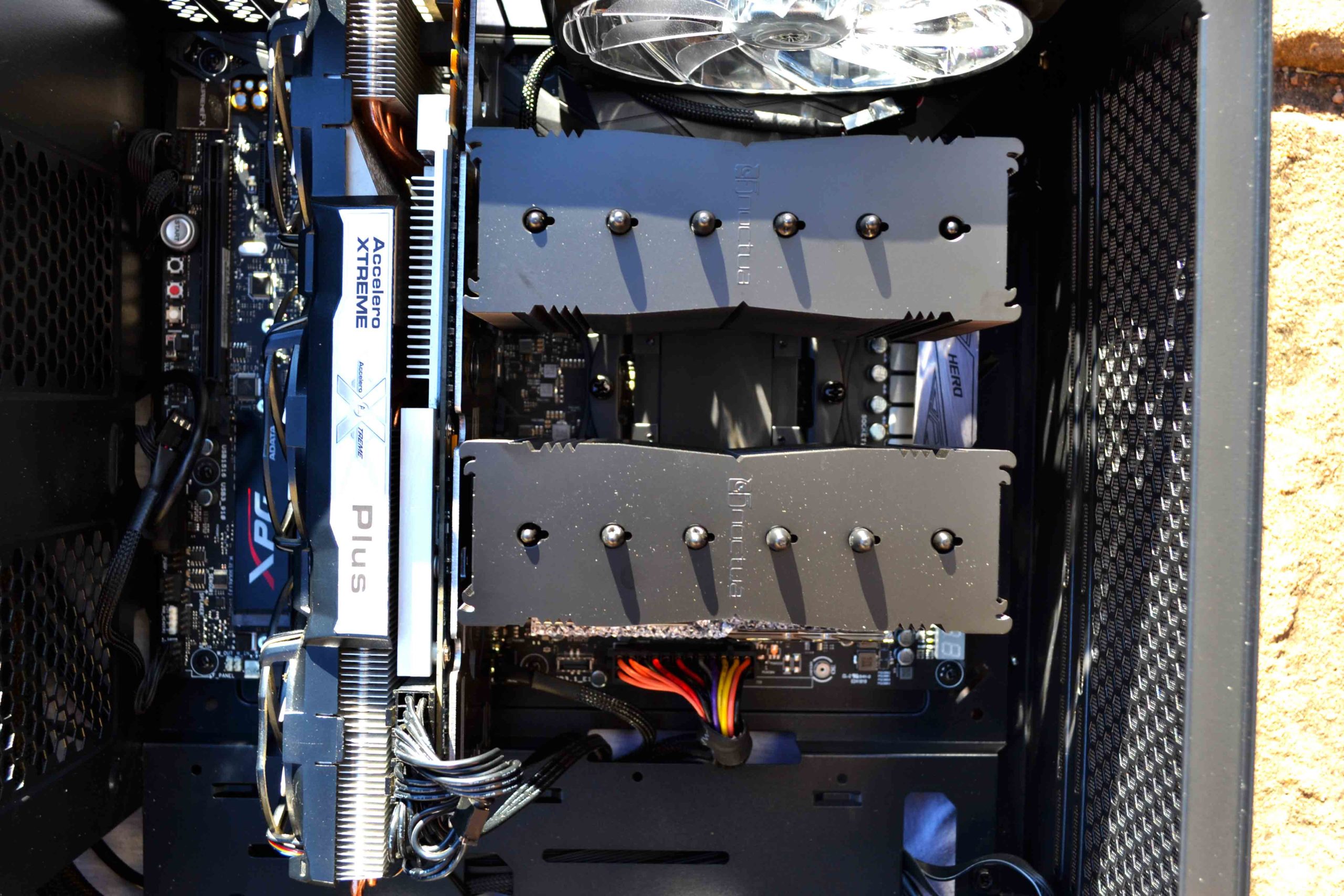 As you can see it’s very easy to install this monster cooler even while the motherboard is in the case. 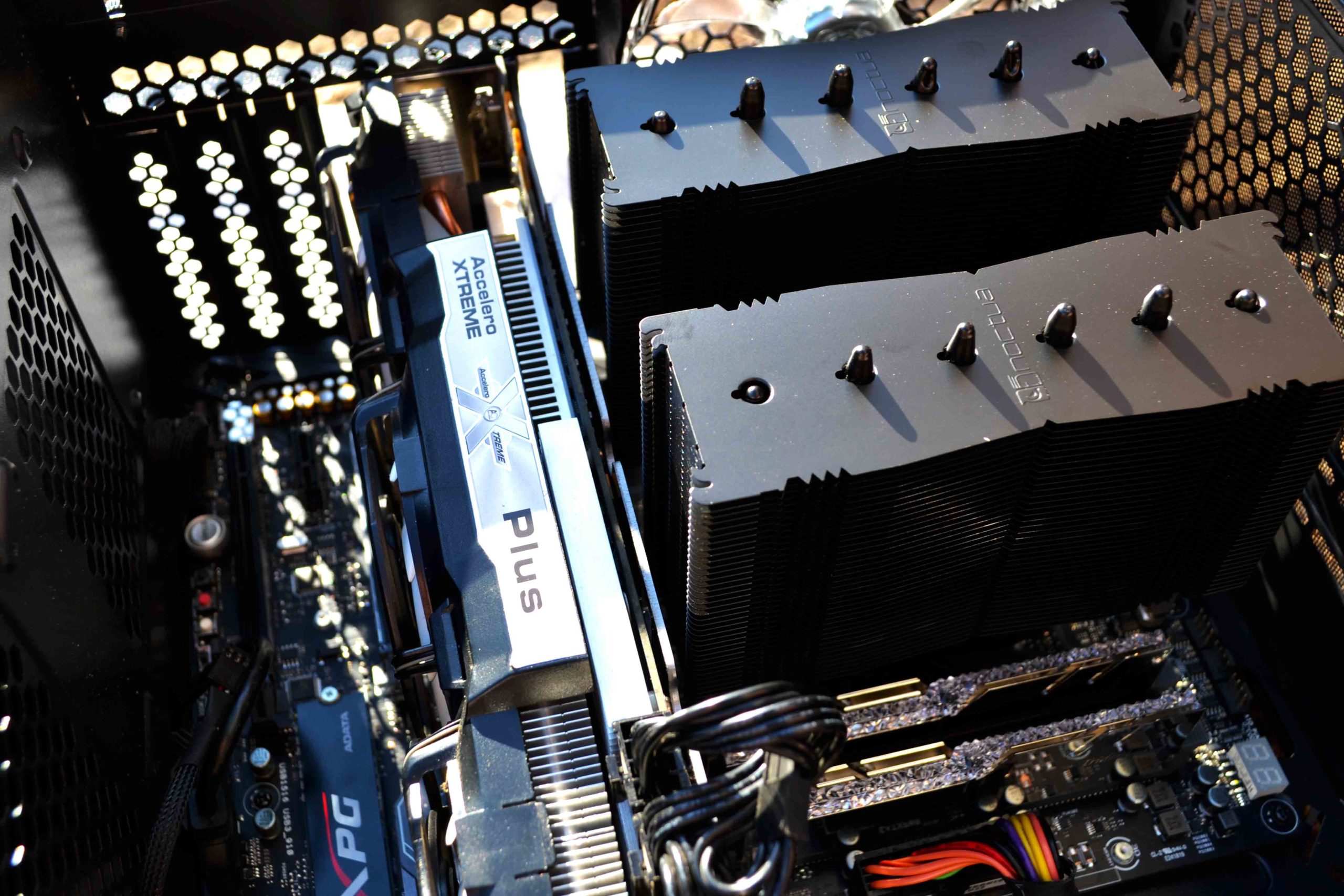 Now let’s check for any clearance issues. I specifically chose this older generation GPU because it has this really thick and tall back plate. As you can see even in the first PCI-E slot, there is no touching the NH-D15 chromax.black. 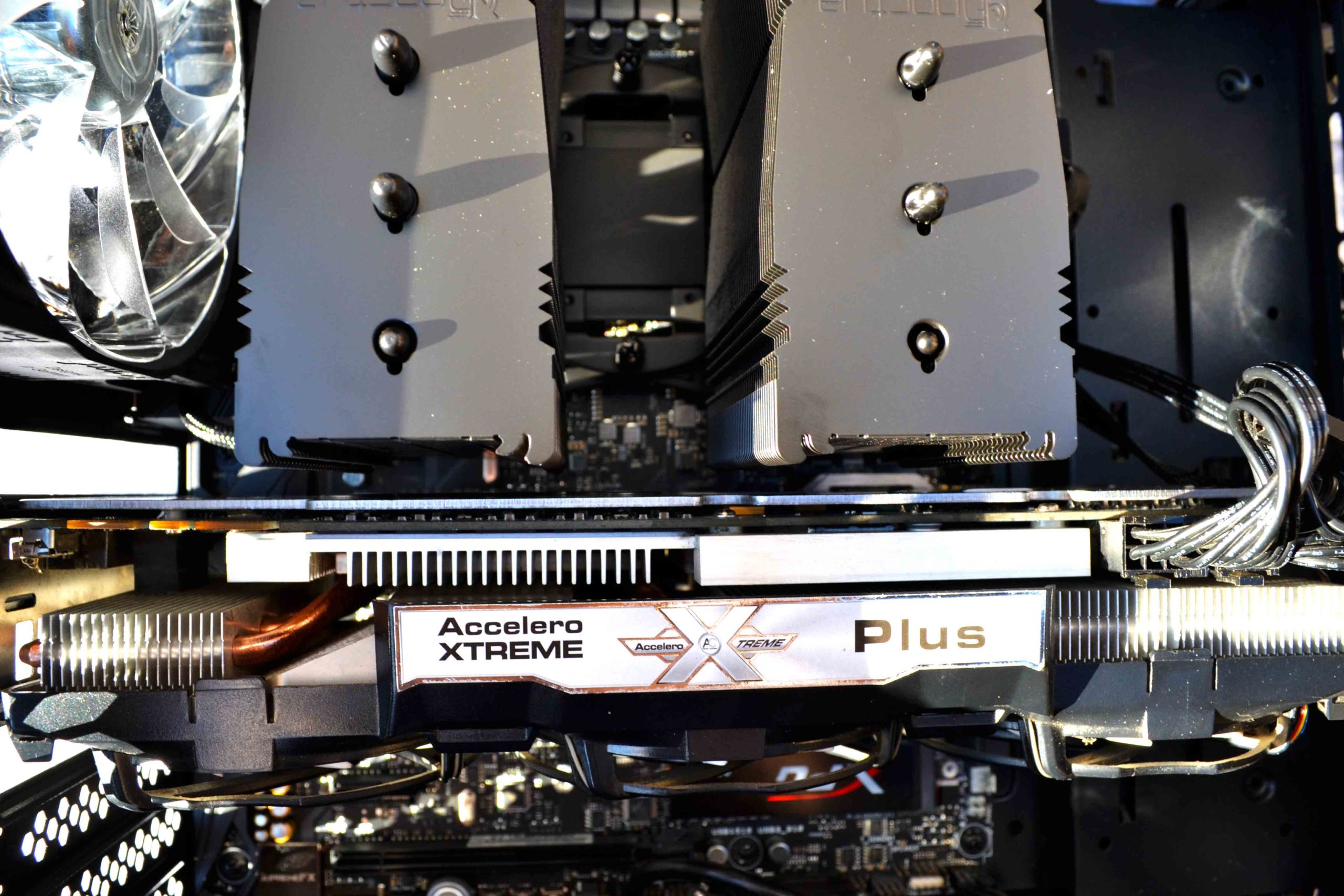 Around the socket area, there is no problem at all from the VRM heatsinks.

The only issue might arrive from memory modules that have a taller heat-spreader than 32 mm if you use both fans on the D15. My RAM kit is 44 mm tall and because the case has plenty of clearance, I just mounted the second fan like so. 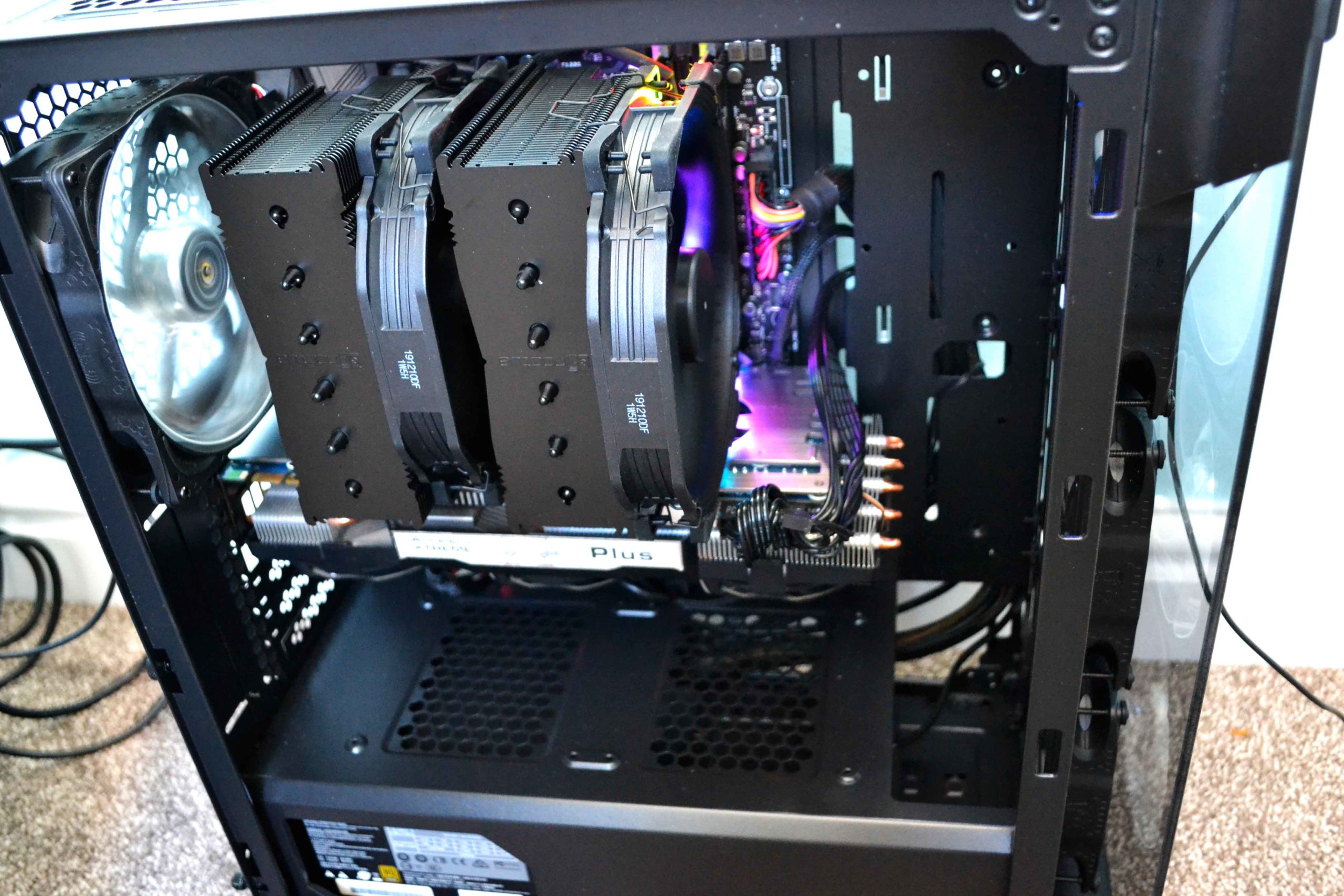 Let’s start in order of CPU load difficulty. First up is the Cinebench R15 test. On the left is the CPU in stock form while on the right we have the results for the overclocked scenario. AMD recommends don’t go higher than 1.375v for daily safe use the 2nd generation Ryzen CPUs. We managed to get 4.0 GHz for 1.300 flat. You can go higher for like 4.1-4.2 GHz but these would need close to 1.4v which means I would always go for lower voltages if the increase in frequency isn’t that big. Straight off the bat, the NH-D15 chromax.black beats even the 240 mm AIO and becomes our top dog in the charts!

The Cinebench R20 is a more modern up to date multi core benchmark suite. So naturally we will see a bigger load and thus a larger temperature figure than the R15.

The easiest test today is a benchmark run in Rise of The Tomb Raider which only makes the CPU use barely 25 to 40% of it’s total computing power ensuring here the results will be very good across the board.

Now let’s inspect the noise levels. Noctua and BeQuiet! are the best in class regarding noise output so naturally they will dominate here as well.

Well this will be a very easy analysis since the Noctua NH-D15 chromax.black delivers on all fronts. It beats everything that we had to test it against and was even quieter (and cheaper) than a 240 mm AIO. It’s not as heavy as I expected given its colossus presence.

The only heads up comes from the first tower that will interfere with taller RAM (>32 mm) in which you can either use the second fan raised like I did or remove it altogether. Then you will have the same performance as a regular D15S which again is no problem at all. On the opposite spectrum, if you want to go all in, you can even add a 3rd fan.

The build quality is fantastic, ease of installation and the attention to details is outstanding from the packaging to the presentation and accessories. You know where this is going, that it will get our maximum mark. Finally it looks just amazing in that all black coating !

It’s seems repetitive that every time we test a Noctua product, to use terms like best in class, top tier, nr. 1 etc. Those statements are a must since they are 100% accurate – they build one of the best, maybe the best air cooling products out there. The NH-D15 in the new chromax.black paint job is the best performing air cooler to date. End of discussion. It beats a more expensive 240 mm AIO while being quieter. When you overclock your CPU, this cooler should be your first choice for air cooling.

Many thanks to Noctua for supplying us with this absolute unit !