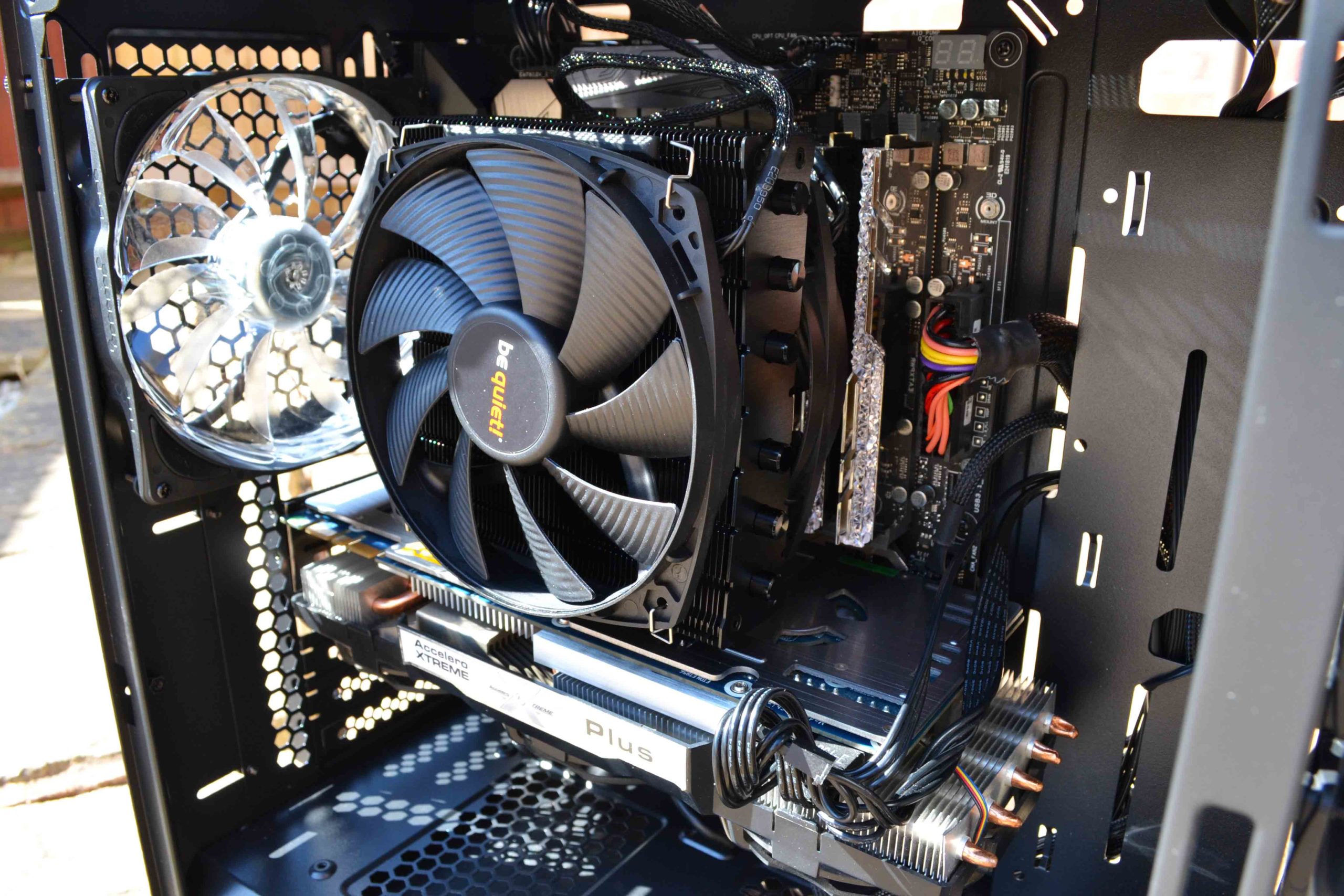 A top down CPU cooler is nothing new in the cooling department regarding heatsink design, however a dual heatsink top down one is. This should make things a bit interesting. We are taking a look at BeQuiet!’s Dark Rock TF that comes with a main heatsink area and a smaller one, accompanied by two 135 mm Silent Wings fans. Capable of 220W of TDP cooling performance and an imposing footprint, this thing means business.

First about Be Quiet!

Dark Rock TF’s main competition may come from Noctua with its NH-C14S or Cryorig’s C1. These are cheaper but none of these offer the product with two fans nor a dual heatsink design like BeQuiet! 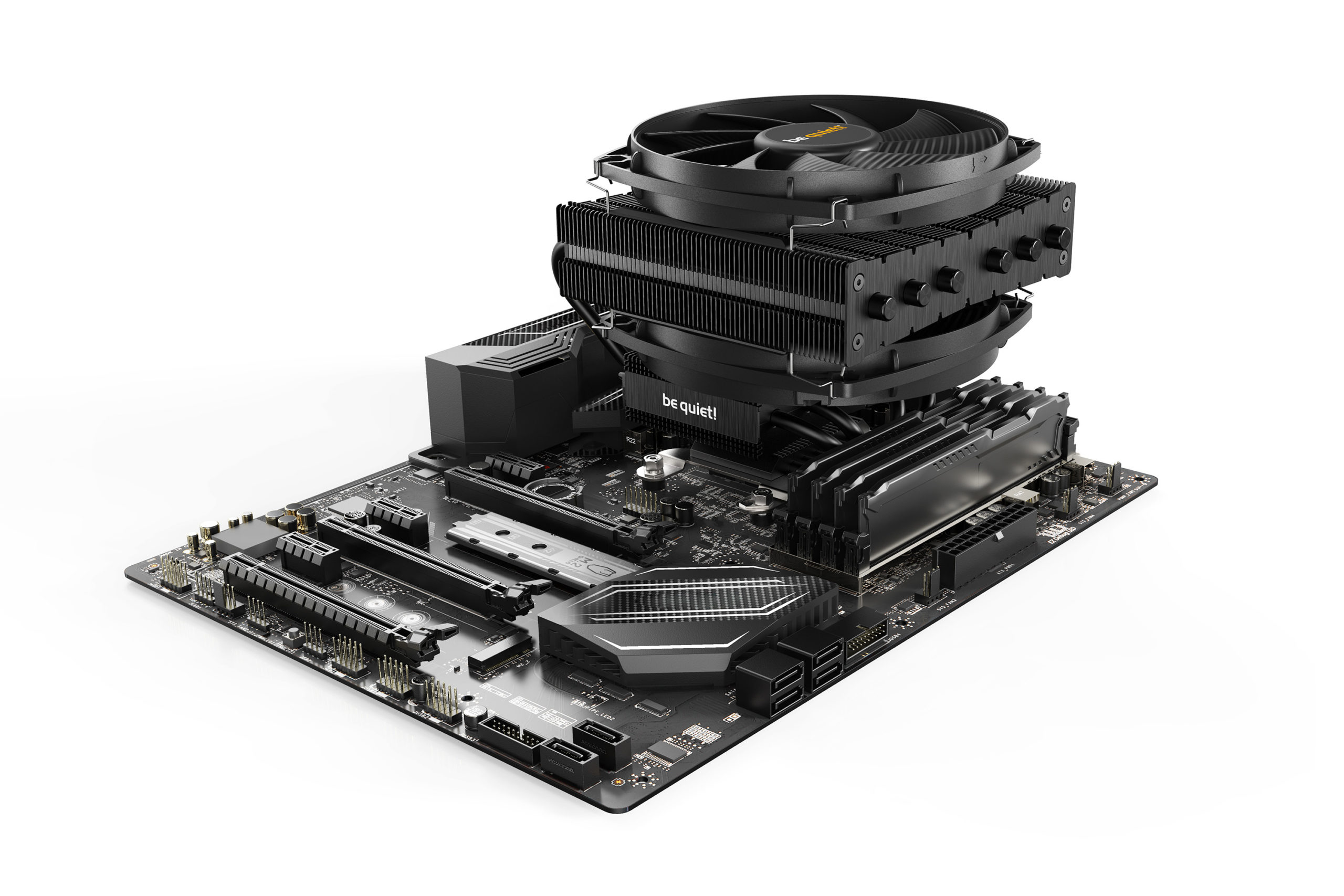 EXTREME COOLING PERFORMANCE
Double-tower for double power – Thanks to its double-tower layout this cooler is a true cooling marvel with 220W TDP – just perfect for the extreme conditions found in the overclocked CPUs of compact gaming PCs.

HIGH-PERFORMANCE HEATPIPES
The centerpiece of every CPU cooler – Dark Rock TF has six high-performance 6mm heat pipes with aluminum caps. They carry heat to the optimum location on the cooling fins. The special black coating with ceramic particles makes a perfect transfer of heat possible. Anti-vibration rubber inserts on the cooling fins of the heat sink further dampen noise.

SPACE-SAVING DESIGN WITH GREAT EFFECT
Highly functional cooling concept – The space-saving topflow design provides ideal cooling, not only for the CPU, but also for surrounding components. It can quietly cool a high-performance, overclocked CPU in a confined space. 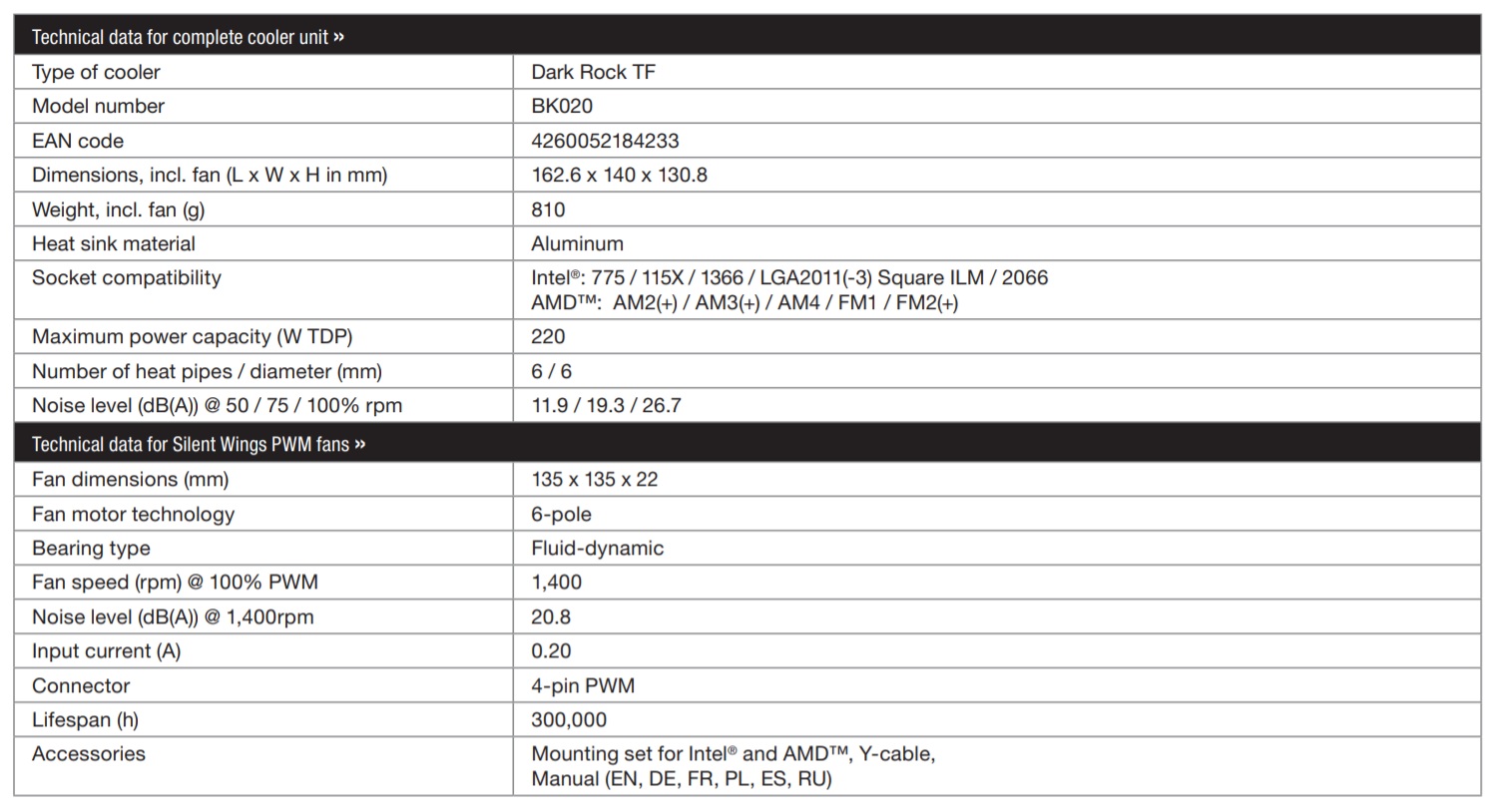 Judging on the initial appearance, this thing looks really big and heavy. But even with the fans on, the whole package weighs under 1 kg (810g).

It’s interesting to see that this CPU cooler still has support for the older sockets like Intel’s LGA775 or AMD’s FM1/2 & AM1/2. It’s also worth pointing out the fact that the fans use a 6-pole fluid dynamic bearing. This combined with a medium RPM range to just 1400 of max RPM, makes them ‘under-stressed’ to a point of reaching a ridiculously high endurance and life span. Around 300,000 hours, a number that translates to over 34 years of non stop running. We will be on Mars by the time you will have to replace these fans.

The Dark Rock TF come in the brands regular design for packaging – the all black background with all of the main info presented underneath the visual depiction of the actual CPU cooler. The bold number of 220W of TDP is the first clue to its cooling capability. 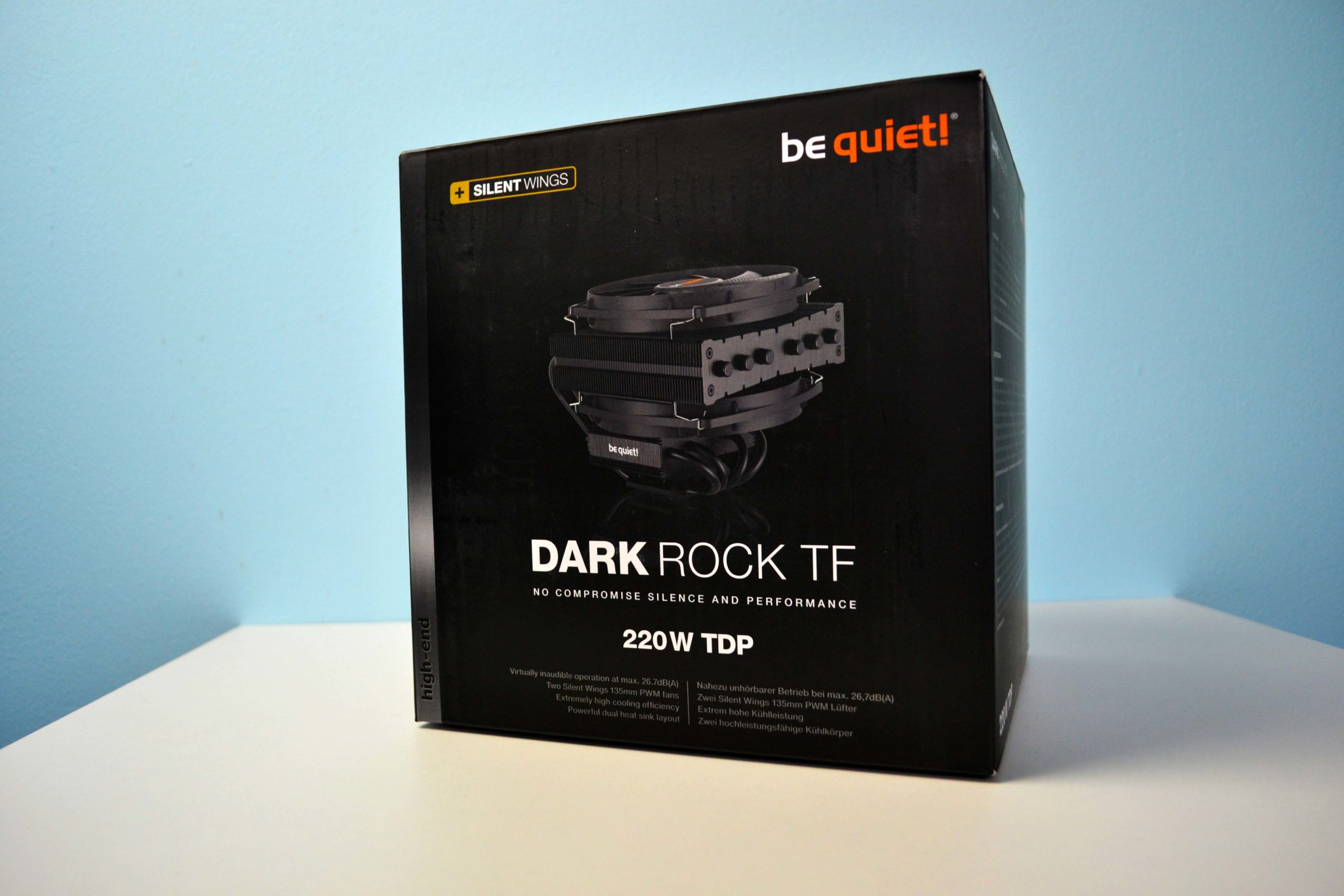 On the back we get all of the specs regarding the heatsinks and fans, which we will cover as well after the unboxing. 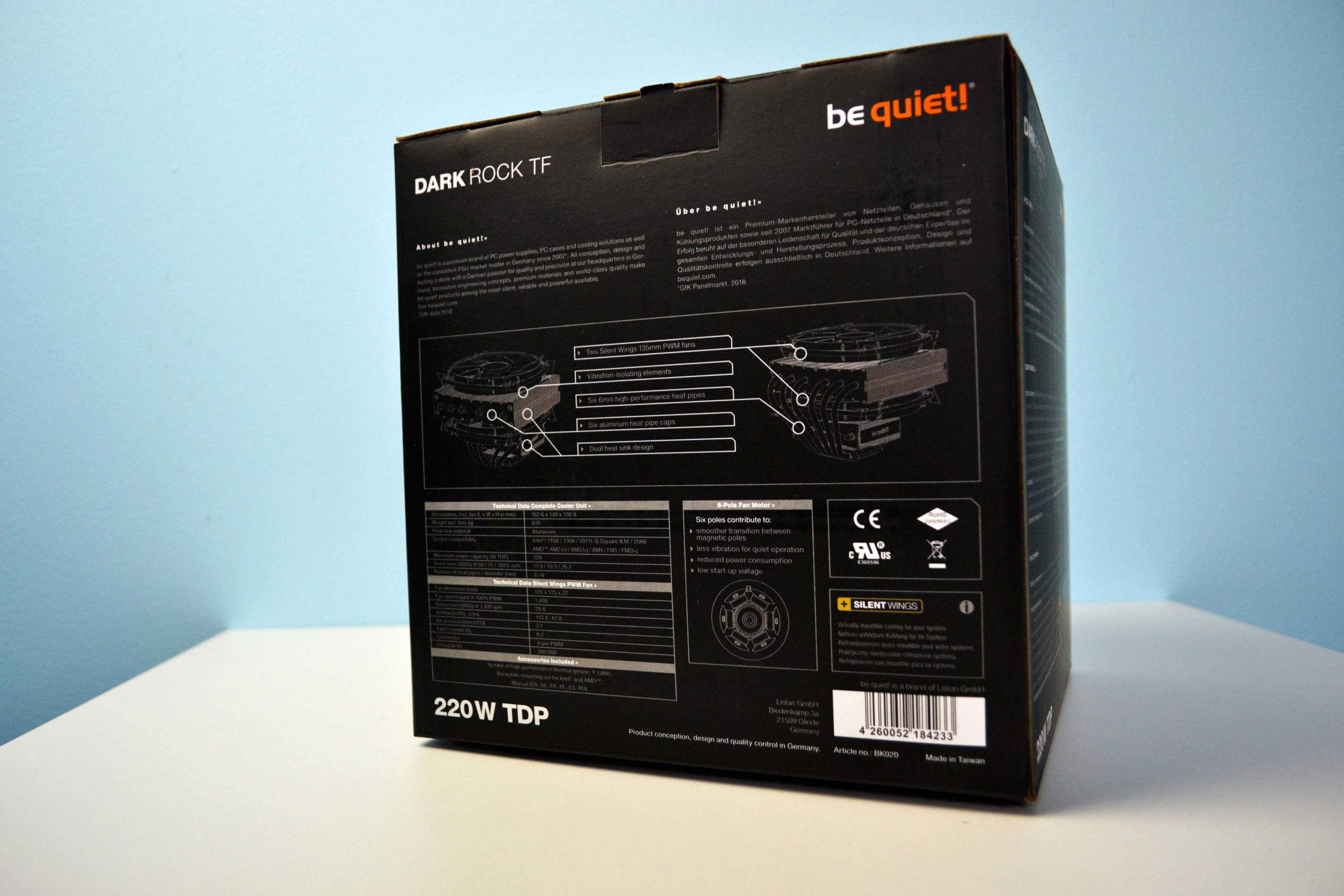 Each fan has it’s own box that sandwiches the heatsink. 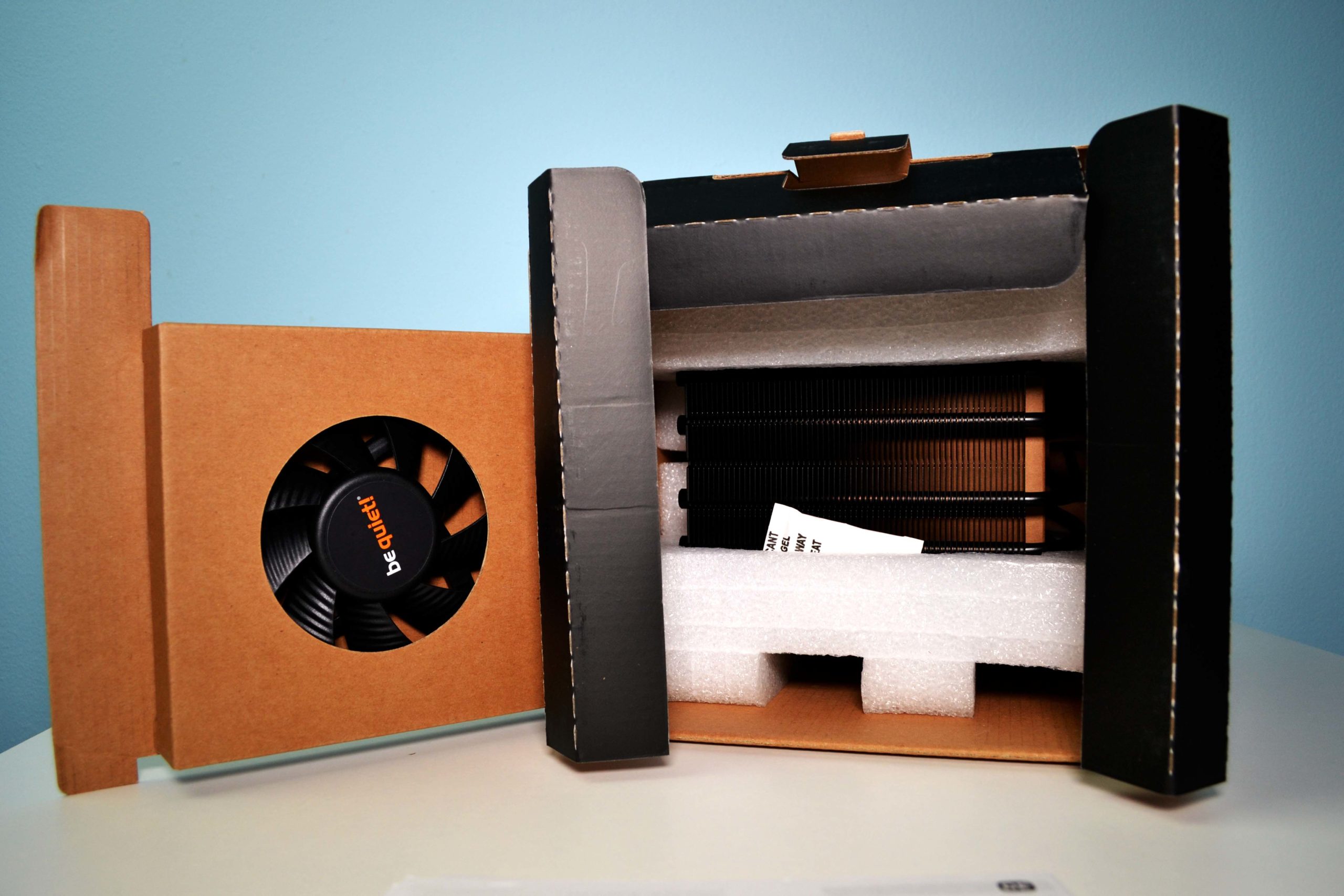 Then the accessory box resides in between the heatsinks. 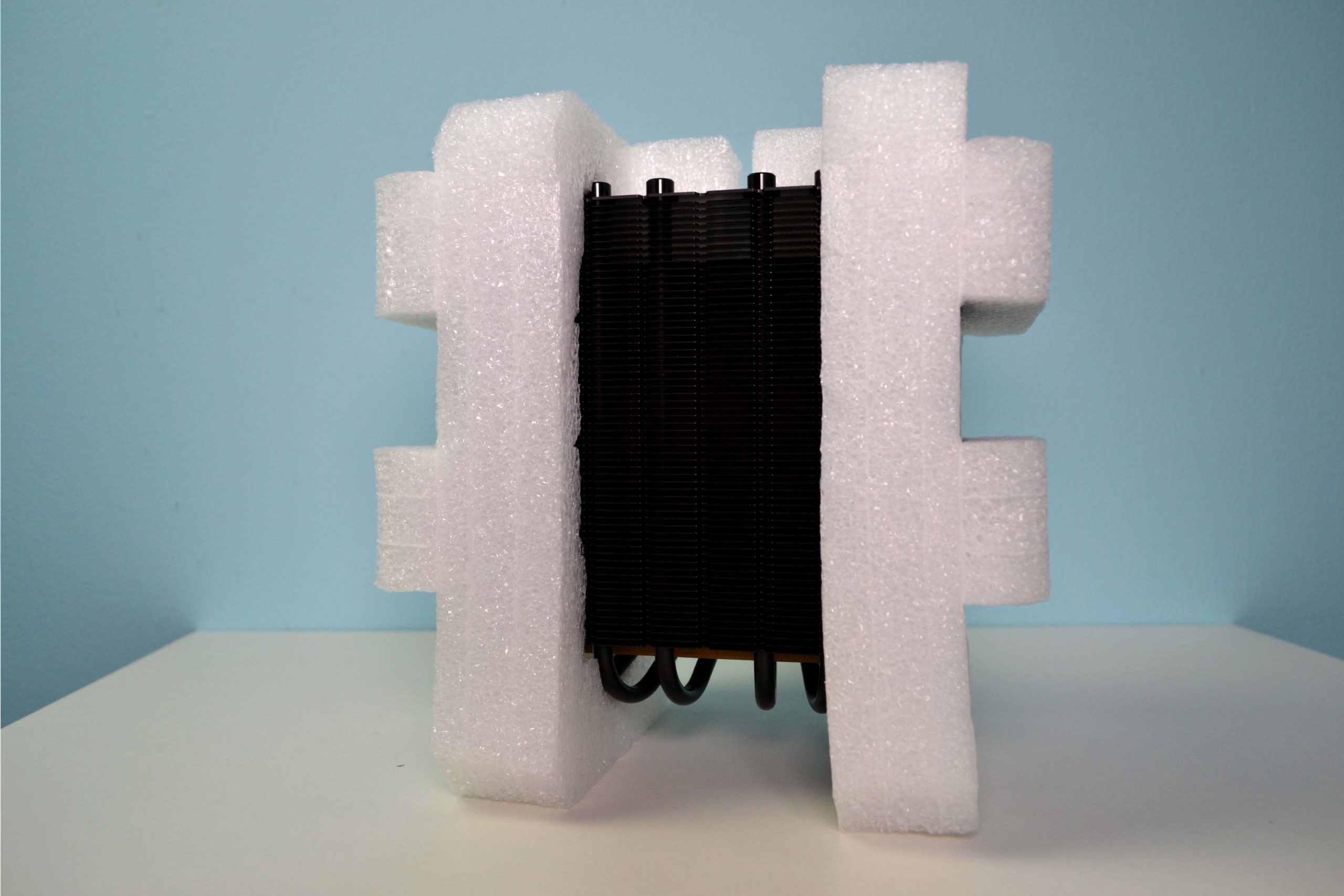 Regarding the actual accessories and the mounting kit, I feel that there are way too many parts. This doesn’t necessarily mean that it’s hard to install since the instruction manuals cover perfectly the steps; it’s just that they should offer a simpler and more elegant system, like they have on the other Dark Rock series. 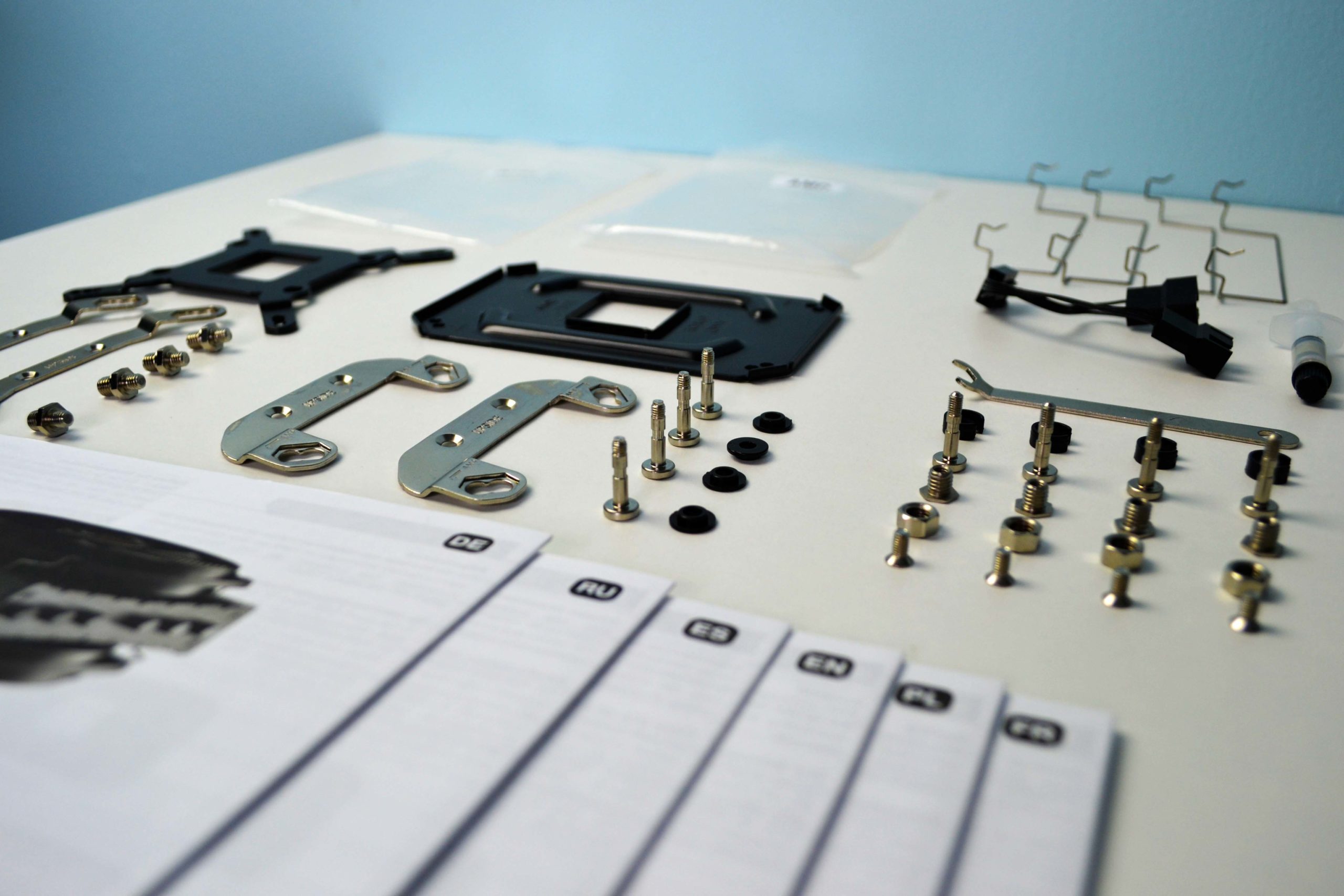 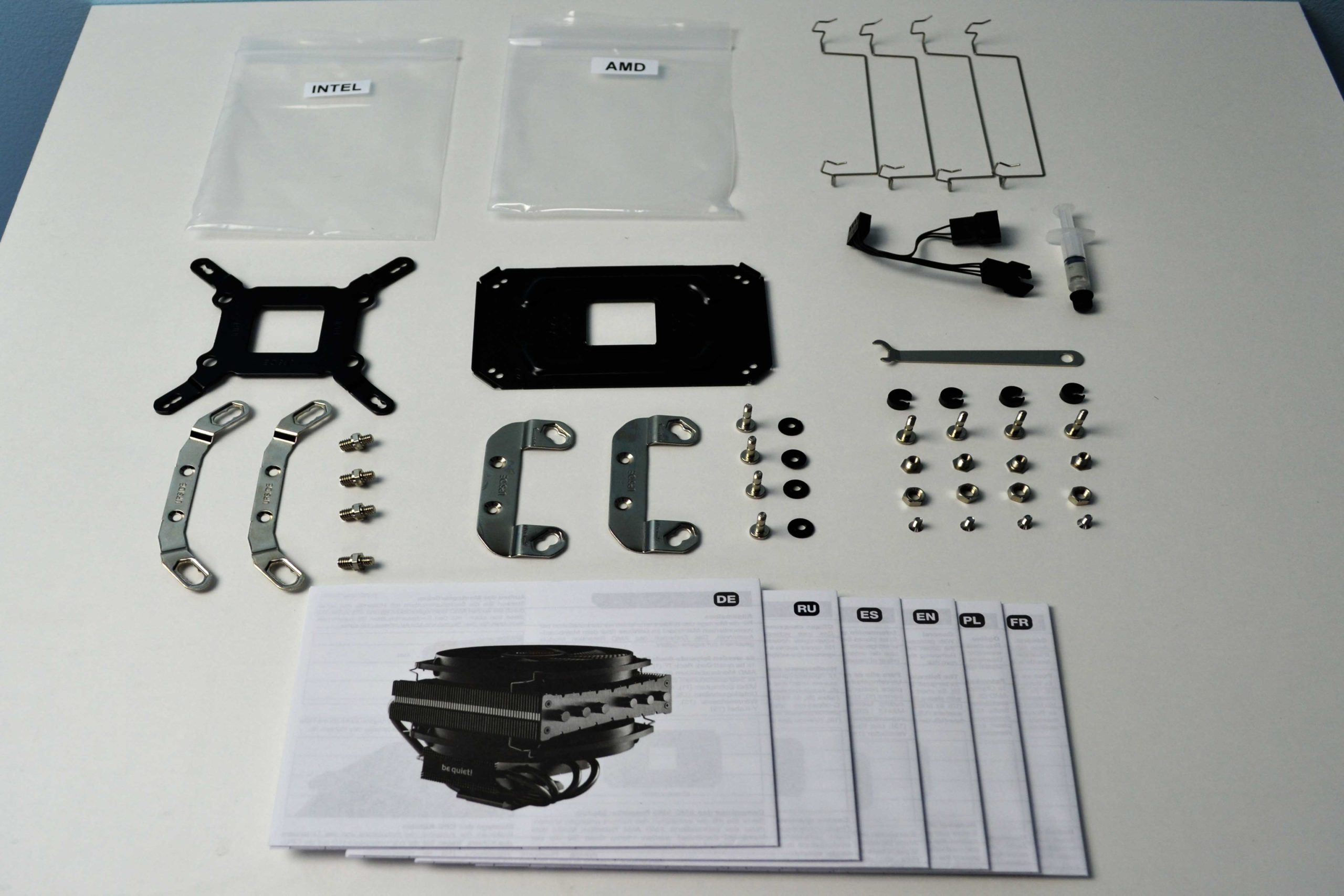 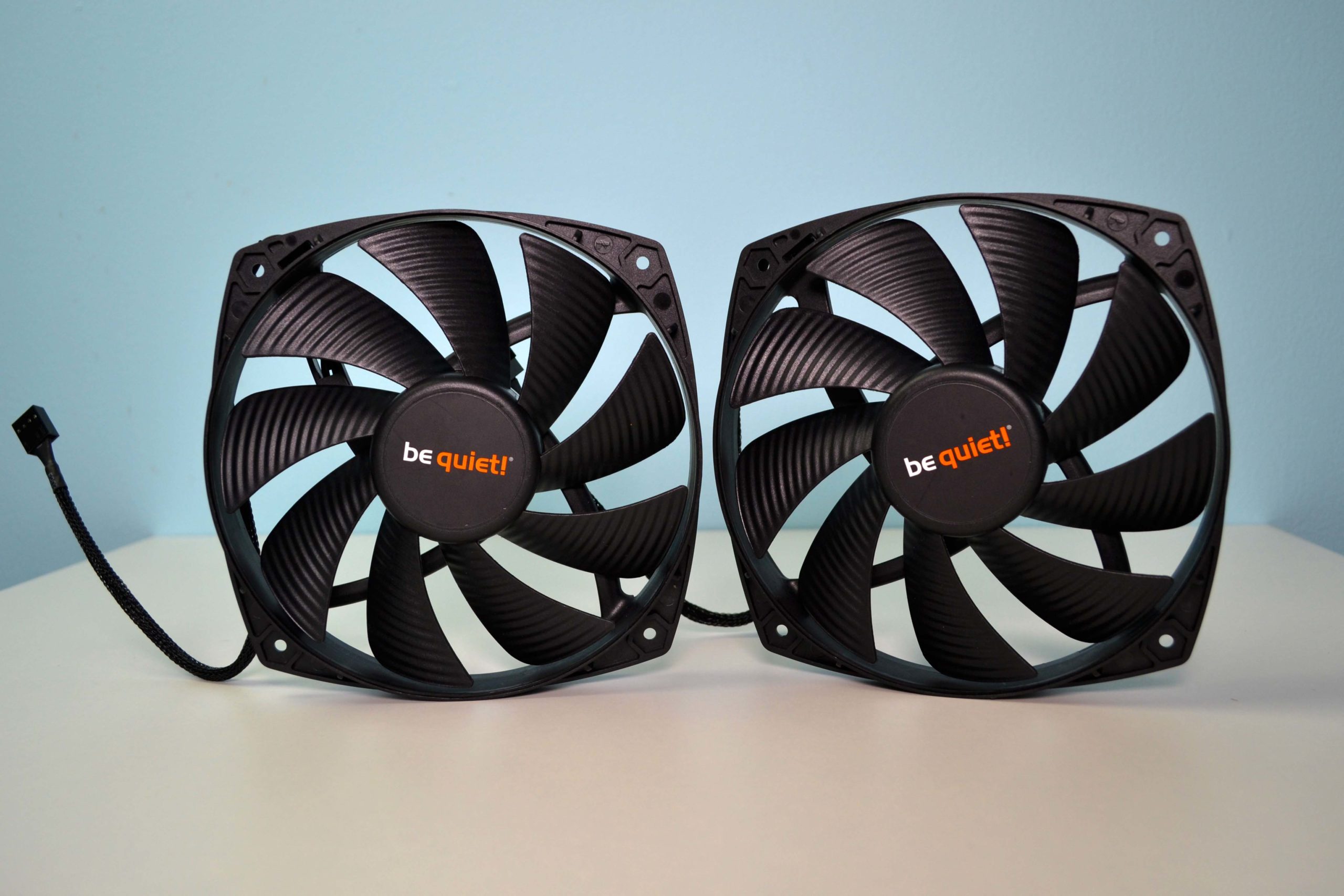 The exact model number is BQ SW3-13525-MF-PWM and are fully sleeved. 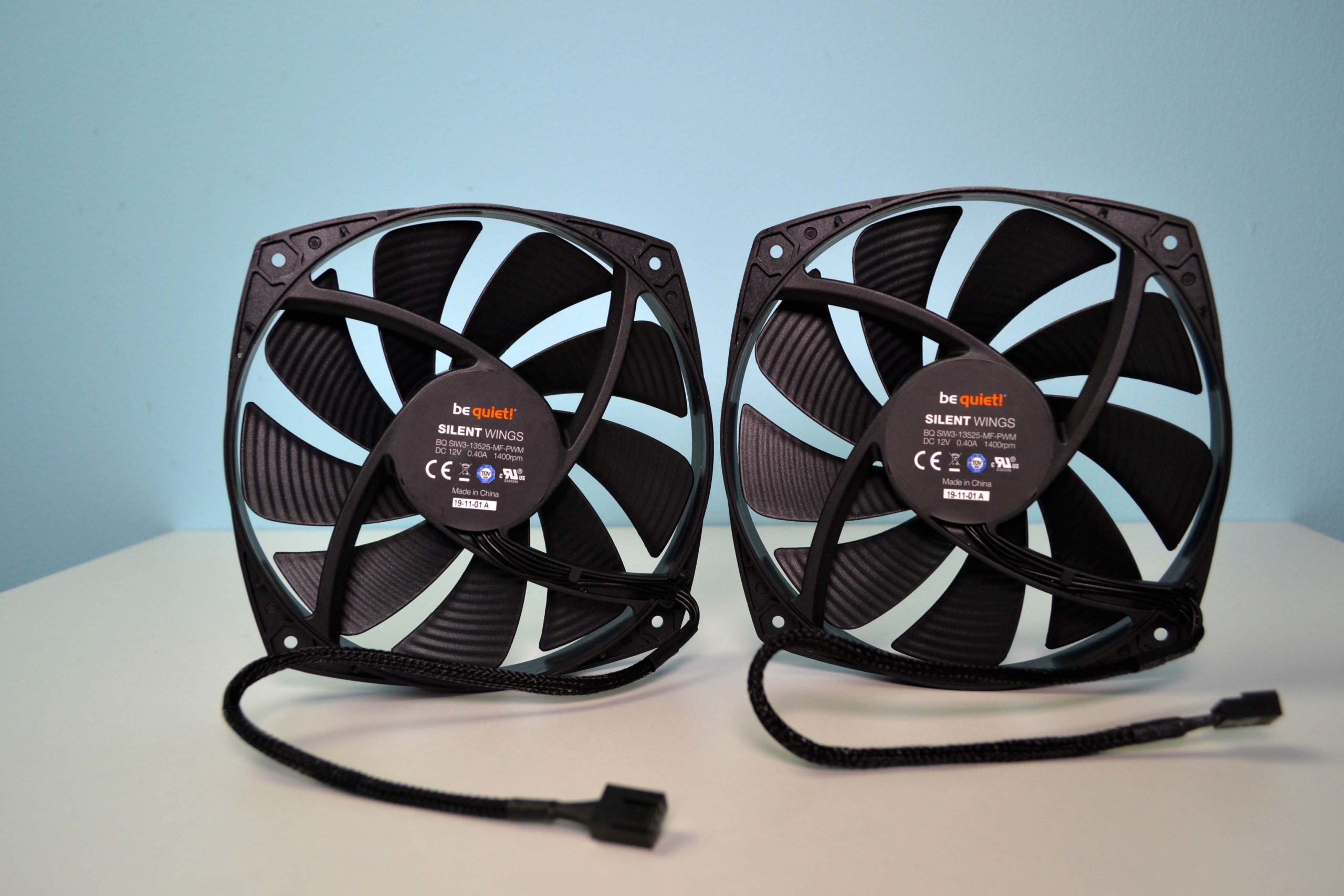 This is what makes the Dark Rock TF stand out – two parallel heatsinks which have different sizes. Then the all dark nickel-plating gives the CPU cooler such a nice premium look. 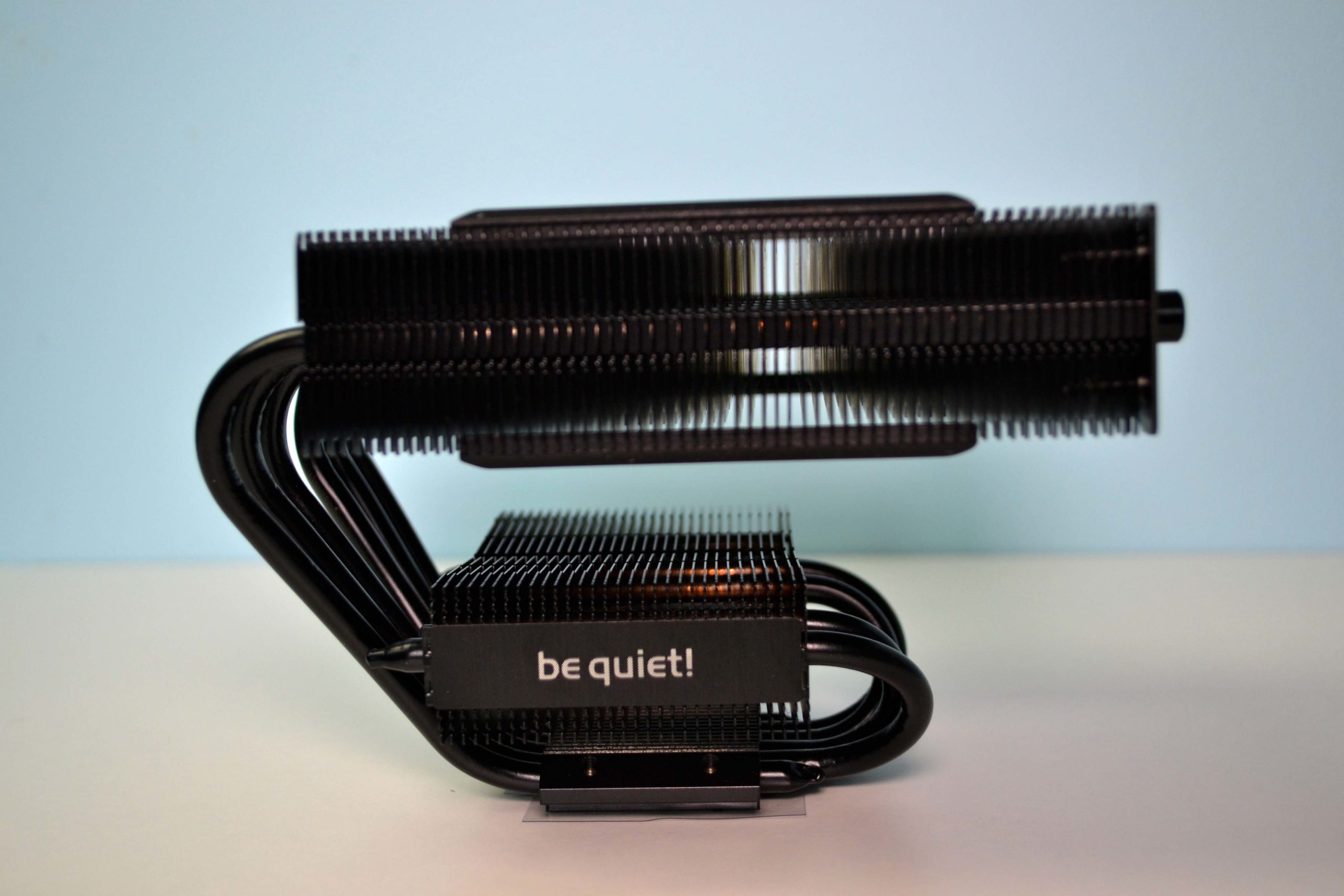 Despite its aggressive and imposing look, it’s just 107.5 mm tall without the fans, which makes it a great choice for mid tower compact builds. Here it is next to a 158 mm tall single tower Noctua U12S heatsink. 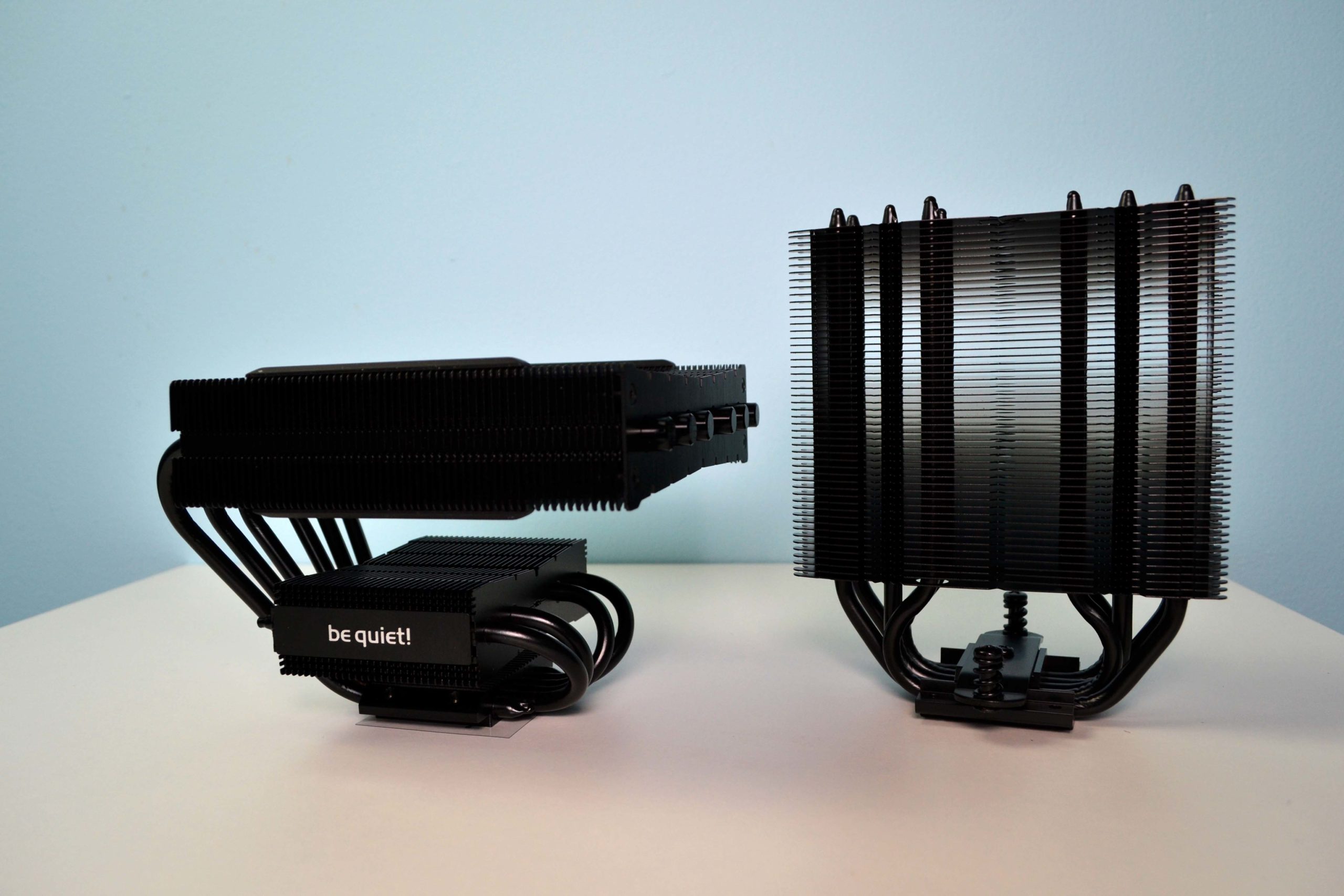 Just look at those heatpipes, they look like a waterfall. We count six of them at six mm thick each and are nicely capped off at the main heatsink’s end for that premium finished look. 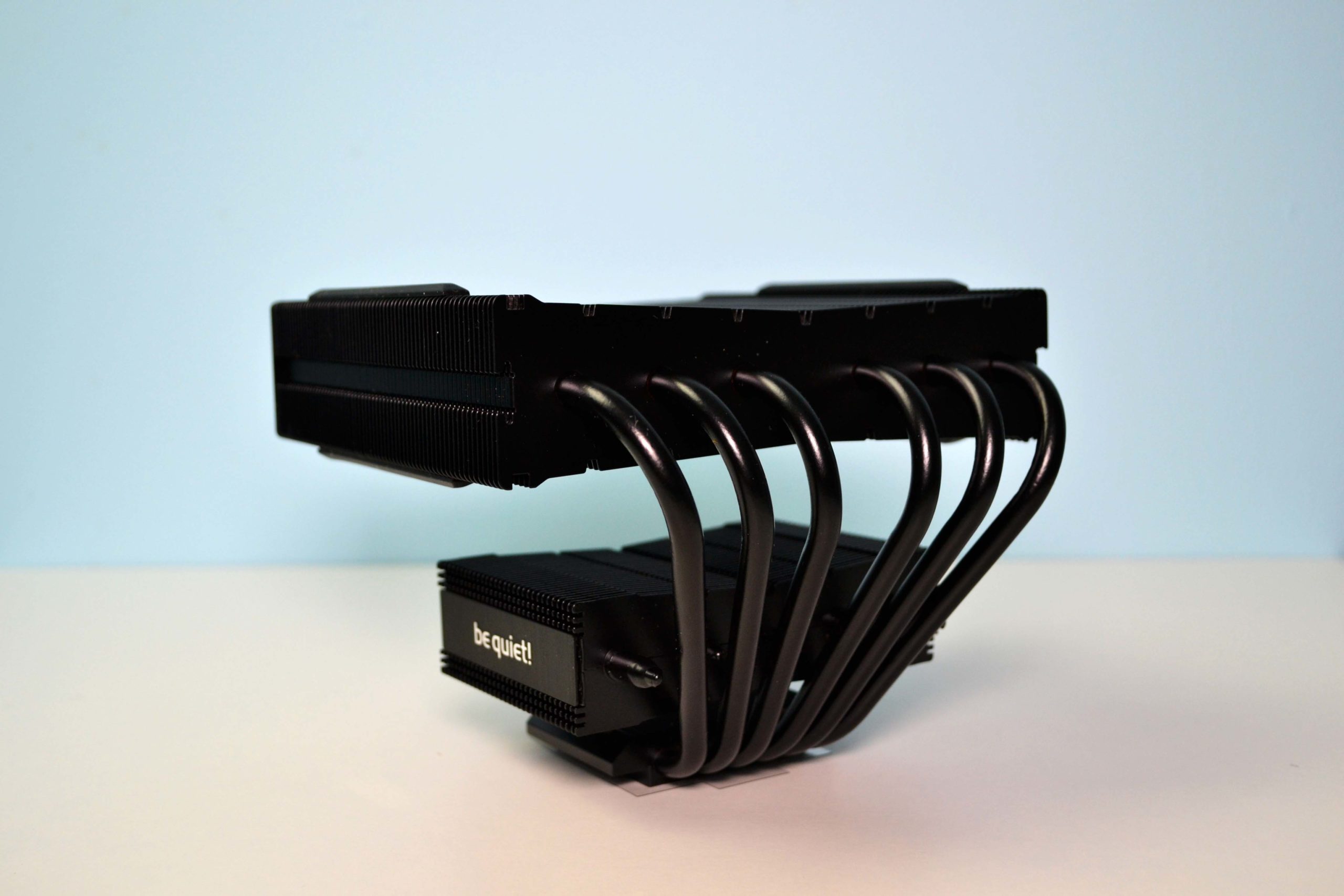 Of course, these heatpipes serpentine their way through both heatsinks. 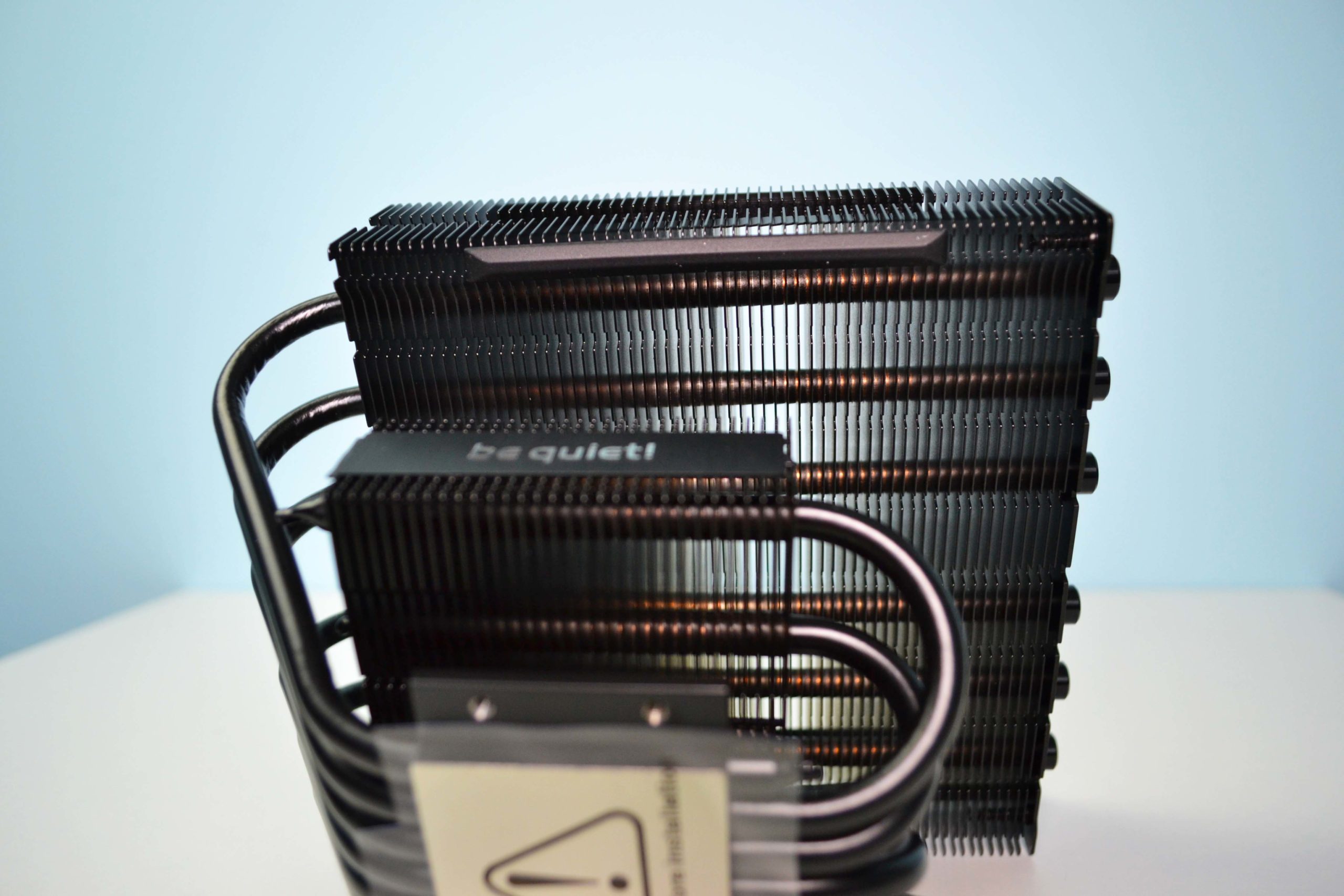 Here is a top view of the main (big) heatsink which has rubber anti-vibration pads on both sides because it accommodates both fans. 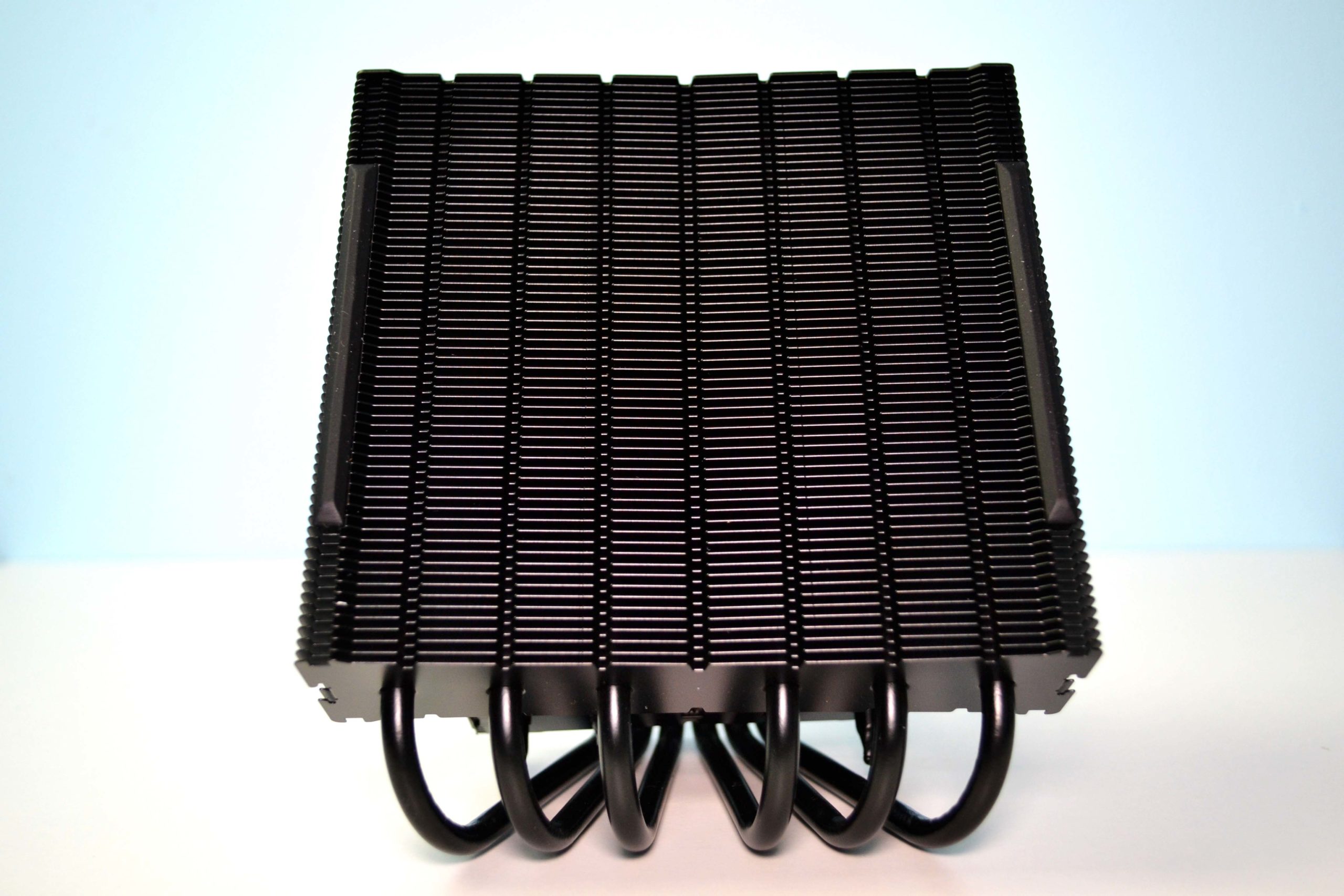 As for the contact surface, the baseplate has a minor mirror finish to it. 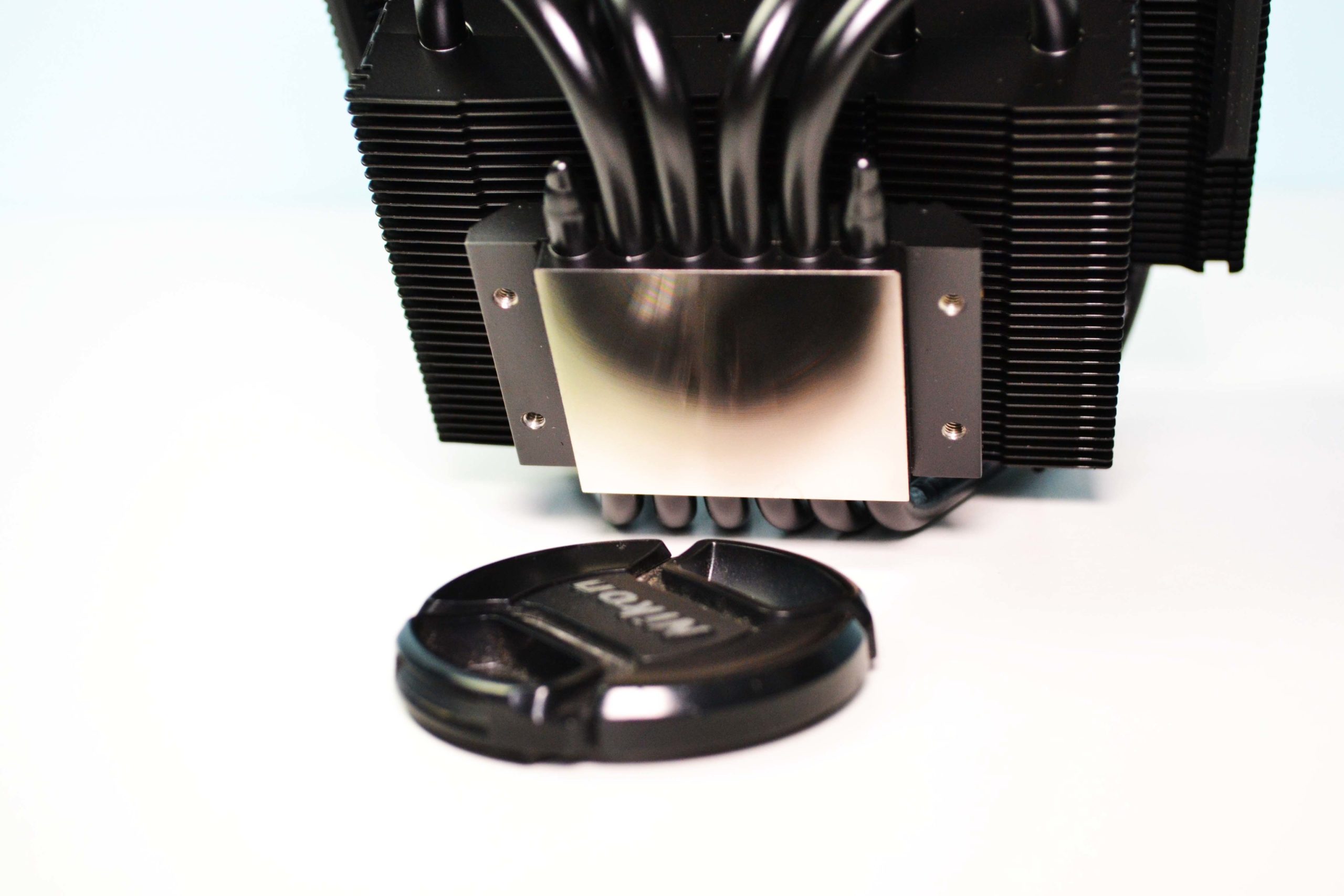 Now here it is with both fans attached. Double-cheeseburger time anyone? 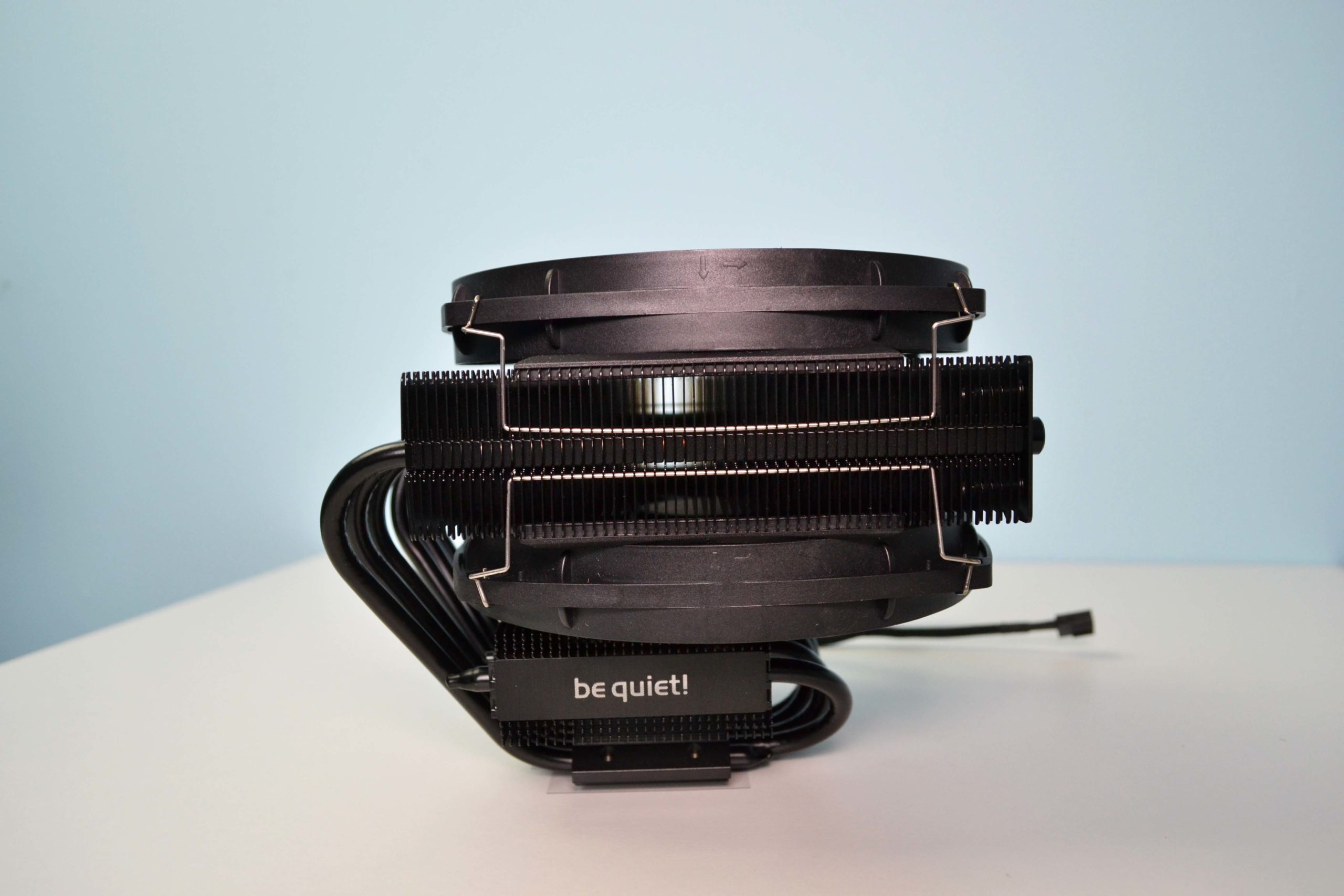 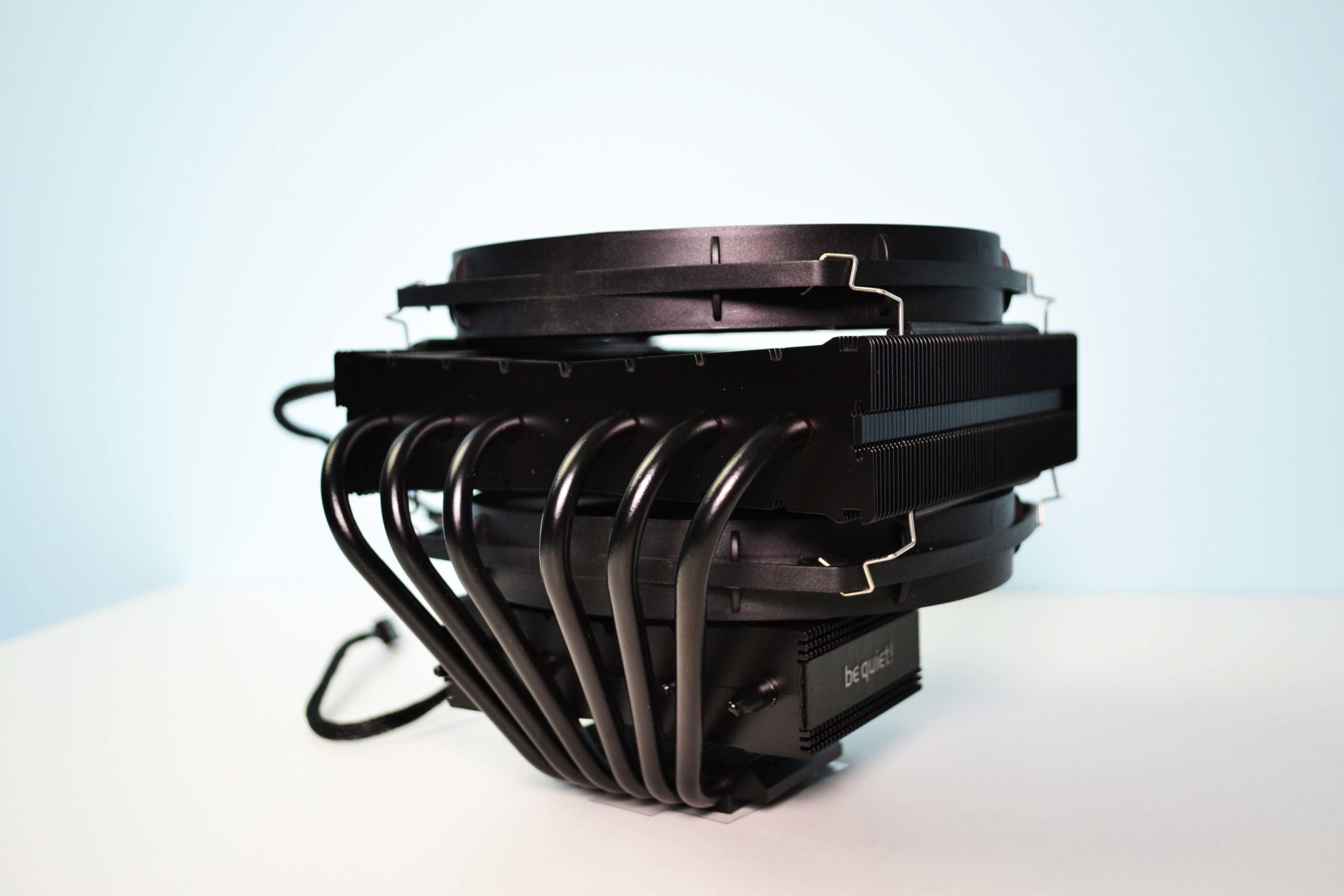 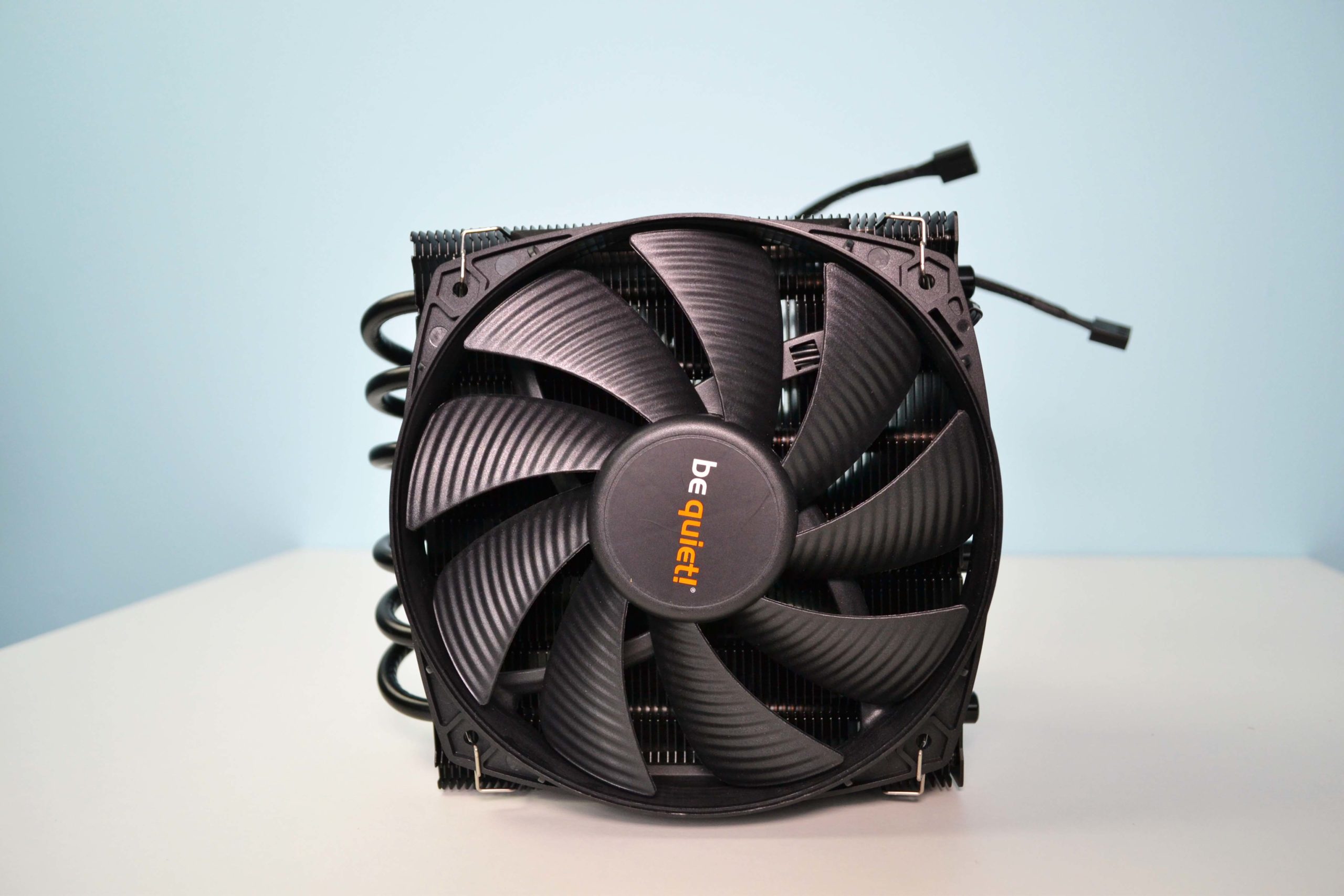 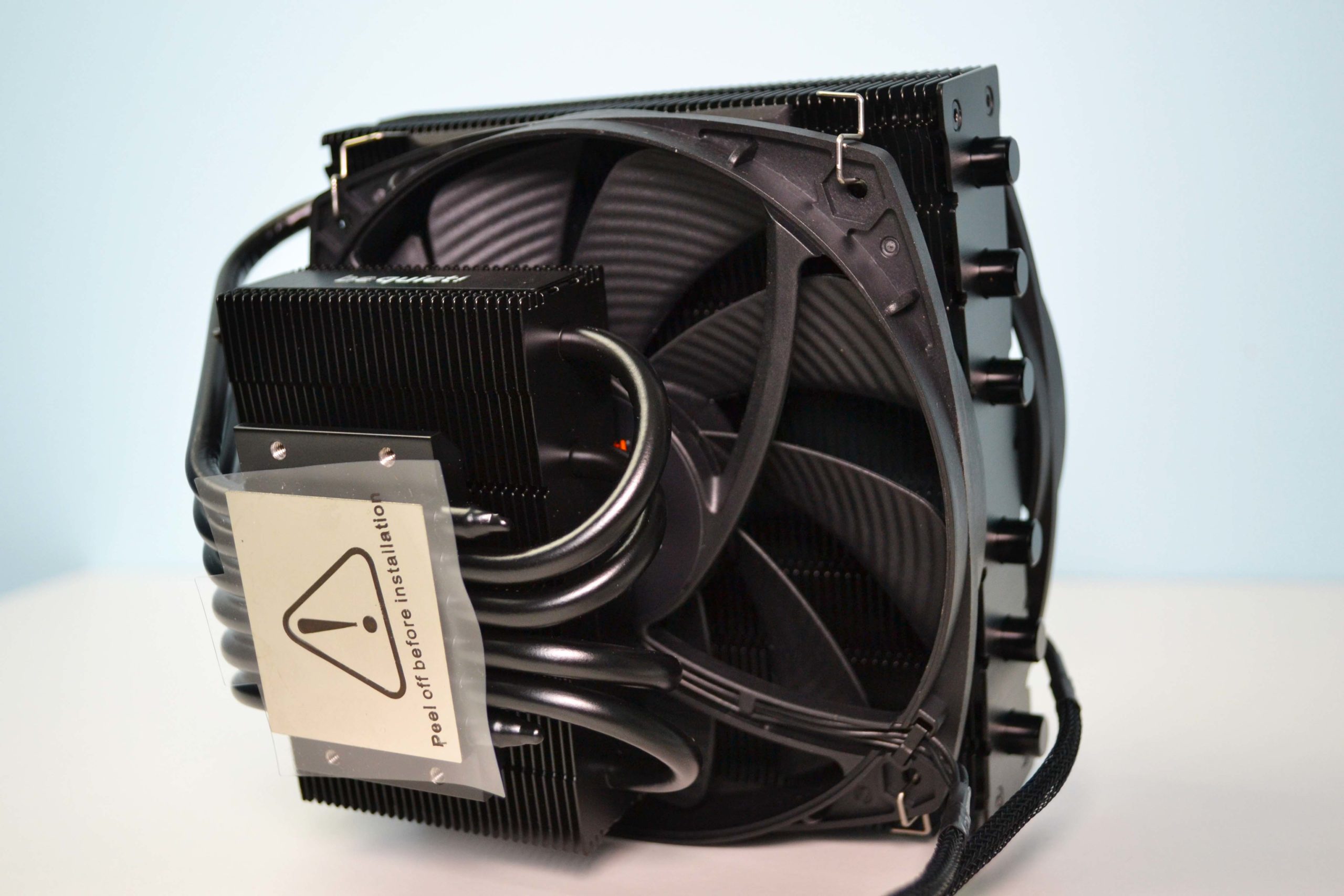 Since we will be using the AM4 socket from AMD, select the appropriate zip-lock bag from the accessory box. These are all the parts that you will require to install. At first glance, yes, it seems that there are way too many pieces but the instructions are very easy to follow to install the heatsink. Let’s begin. 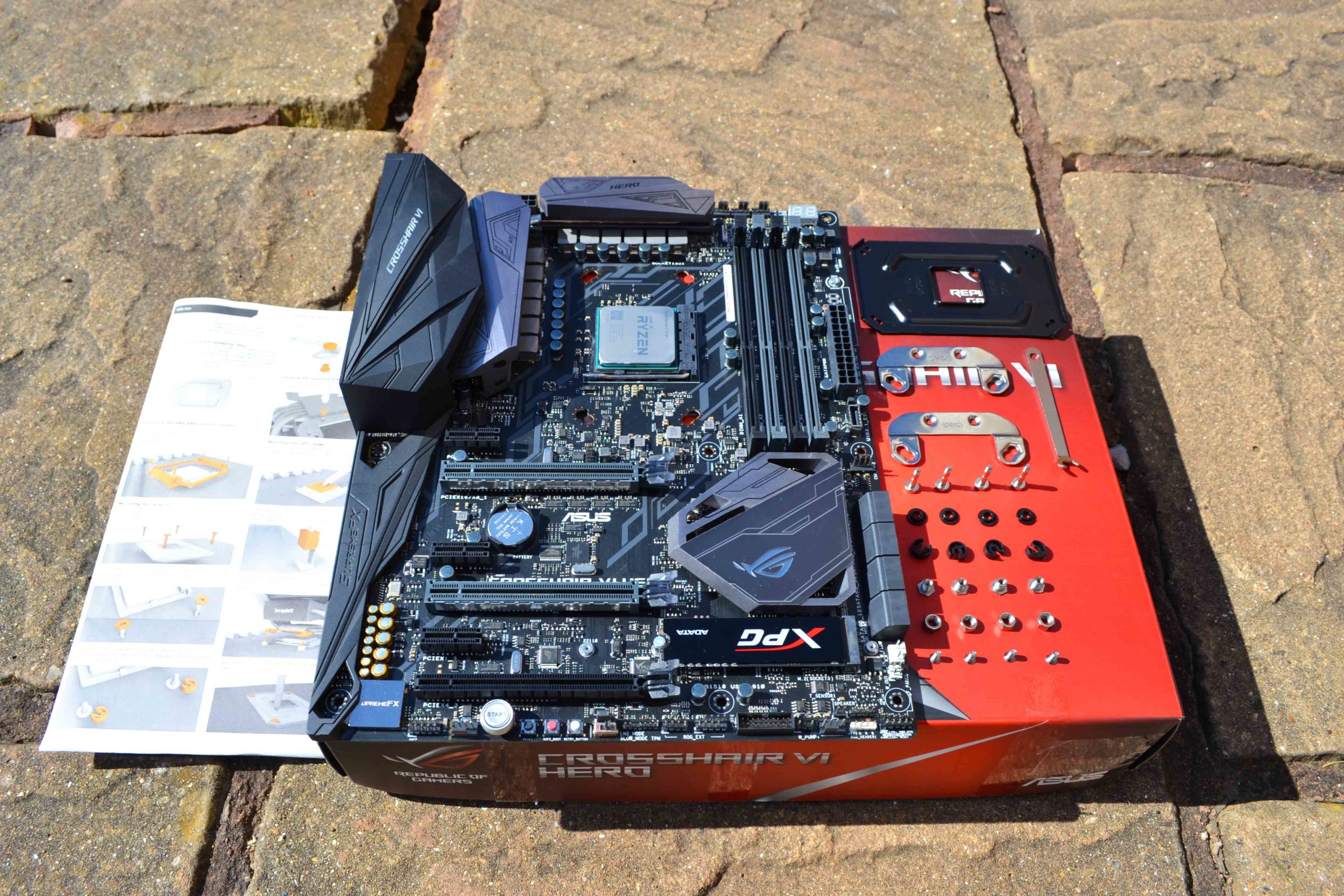 Take the included AMD backplate (not the one that comes with any AM4 motherboard) and install the AM4 holes the M3x15 screws.

On the CPU side, install these plastic washers with the small ring facing downwards.

Then secure the screws via these C-profile spacers.

Now install the sleeved nuts to the AMD brackets in the appropriate AM4 spacing and tighten them down with the included mini wrench.

Both brackets need to be installed on the heatsink via these 4 screws.

Apply a pea sized quantity of thermal paste onto the CPU. Also now you can install the 140 mm fans onto the heatsinks via the 4 metal wire clips, making sure that the fans’ airflow goes downwards.

To finish the installation, just plug both fans to the 4-pin ports onto the motherboard either via the included 2-way fan splitter or if the motherboard has enough ports. 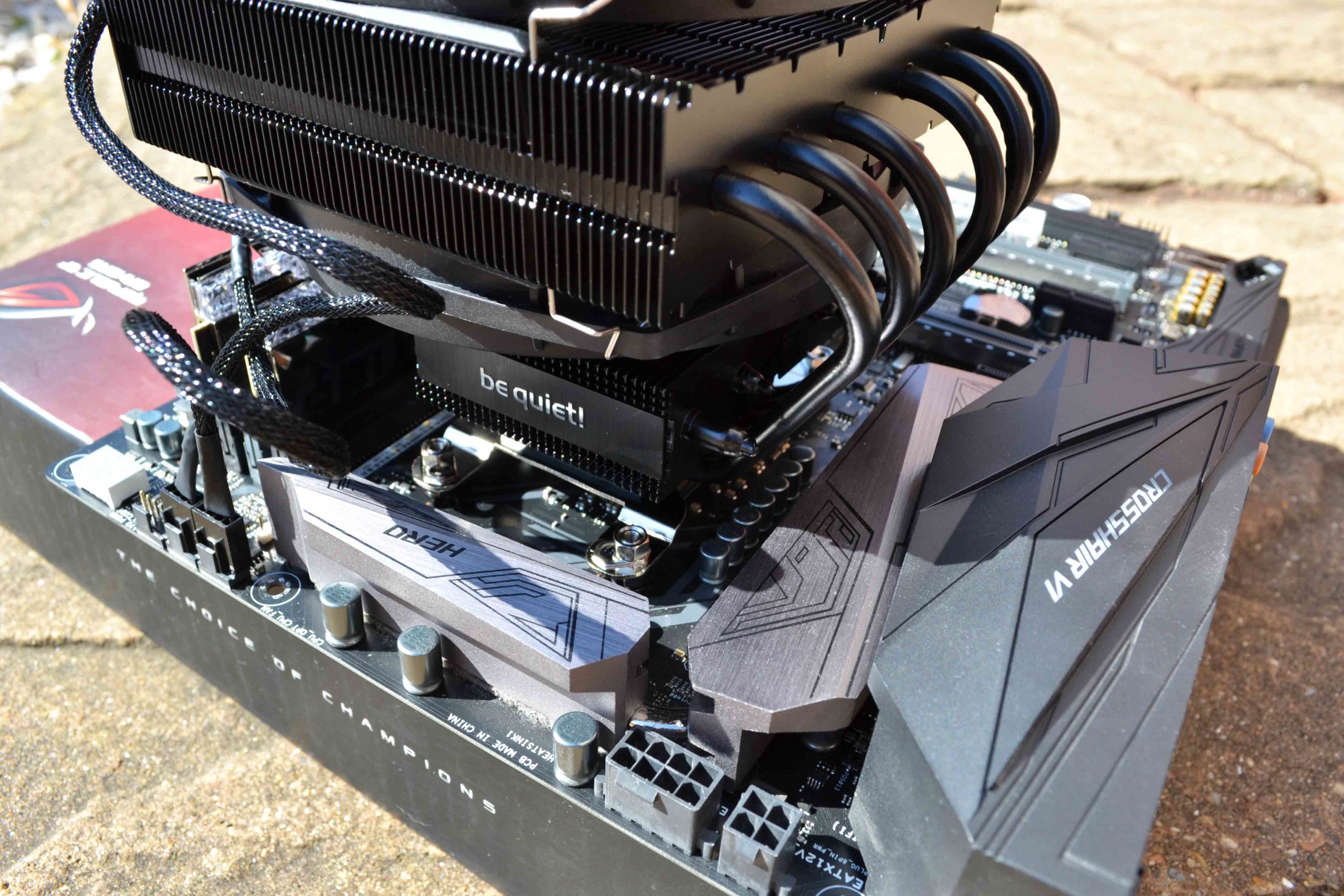 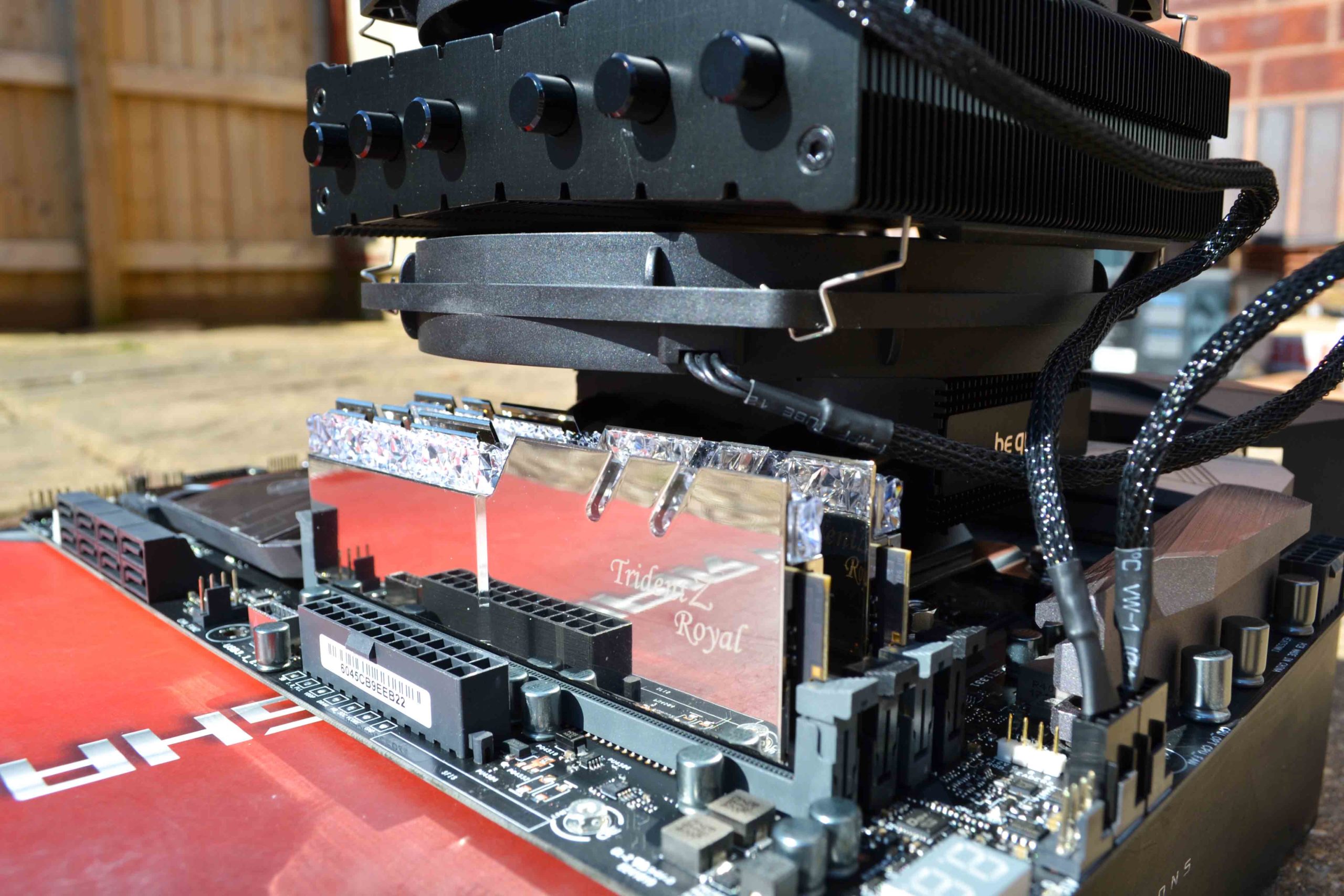 Then everything is perfect all round, with no interference from the motherboard’s large VRM heatsinks for example. 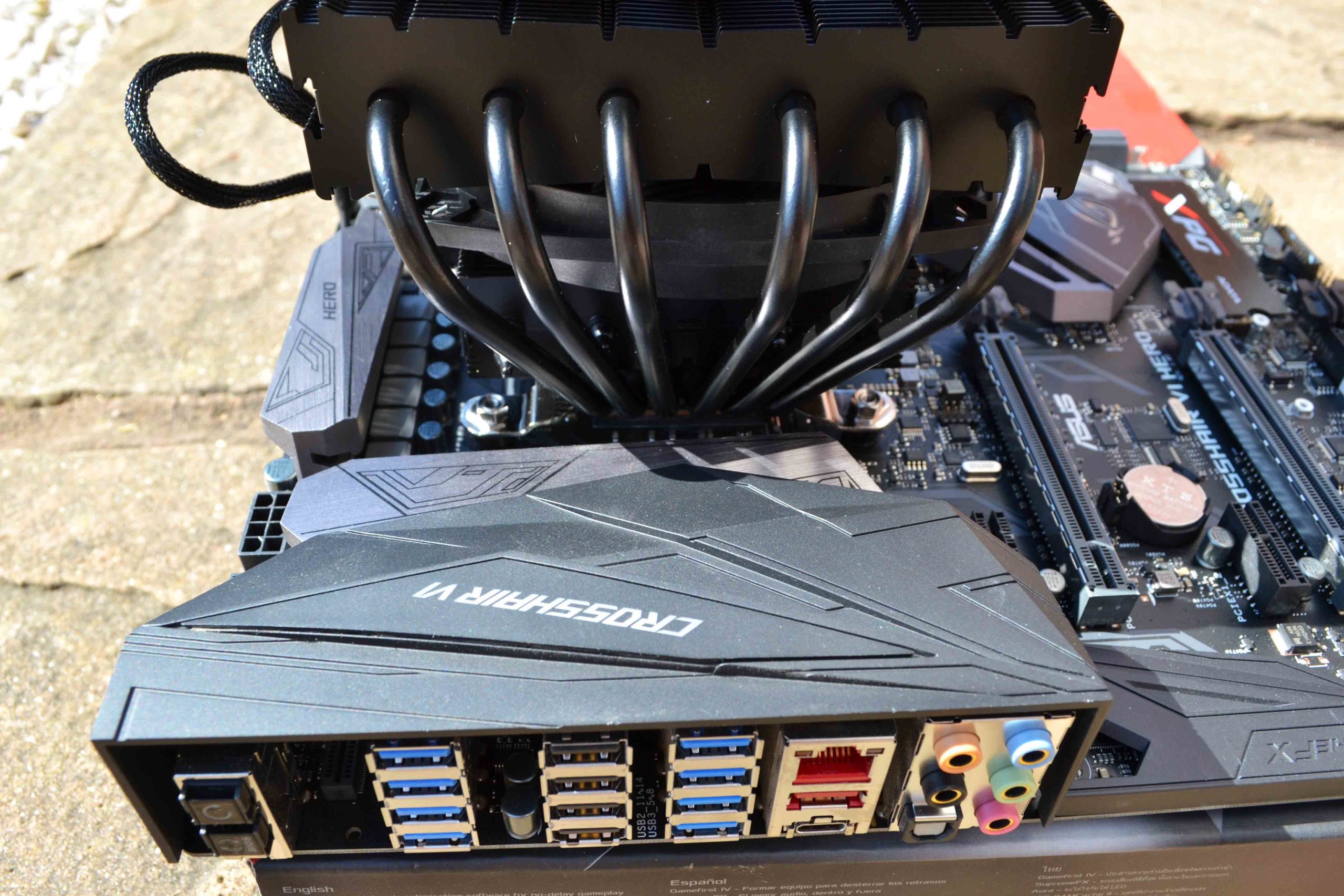 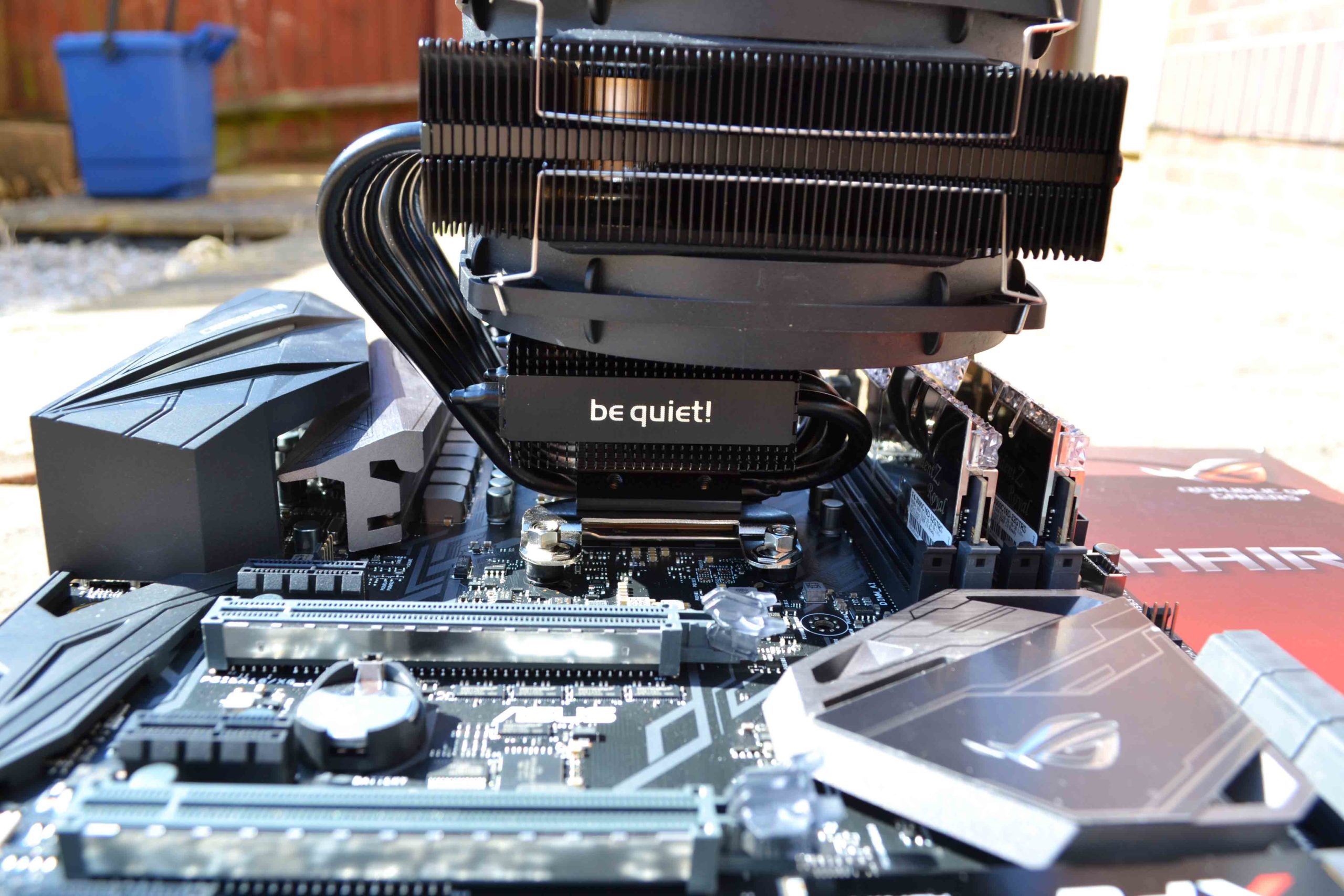 Final clearance to check is around the first PCI-E 16x graphics card slot. Even with a GPU that has such a large backplate, we have plenty of room left. Thus nothing is touching. 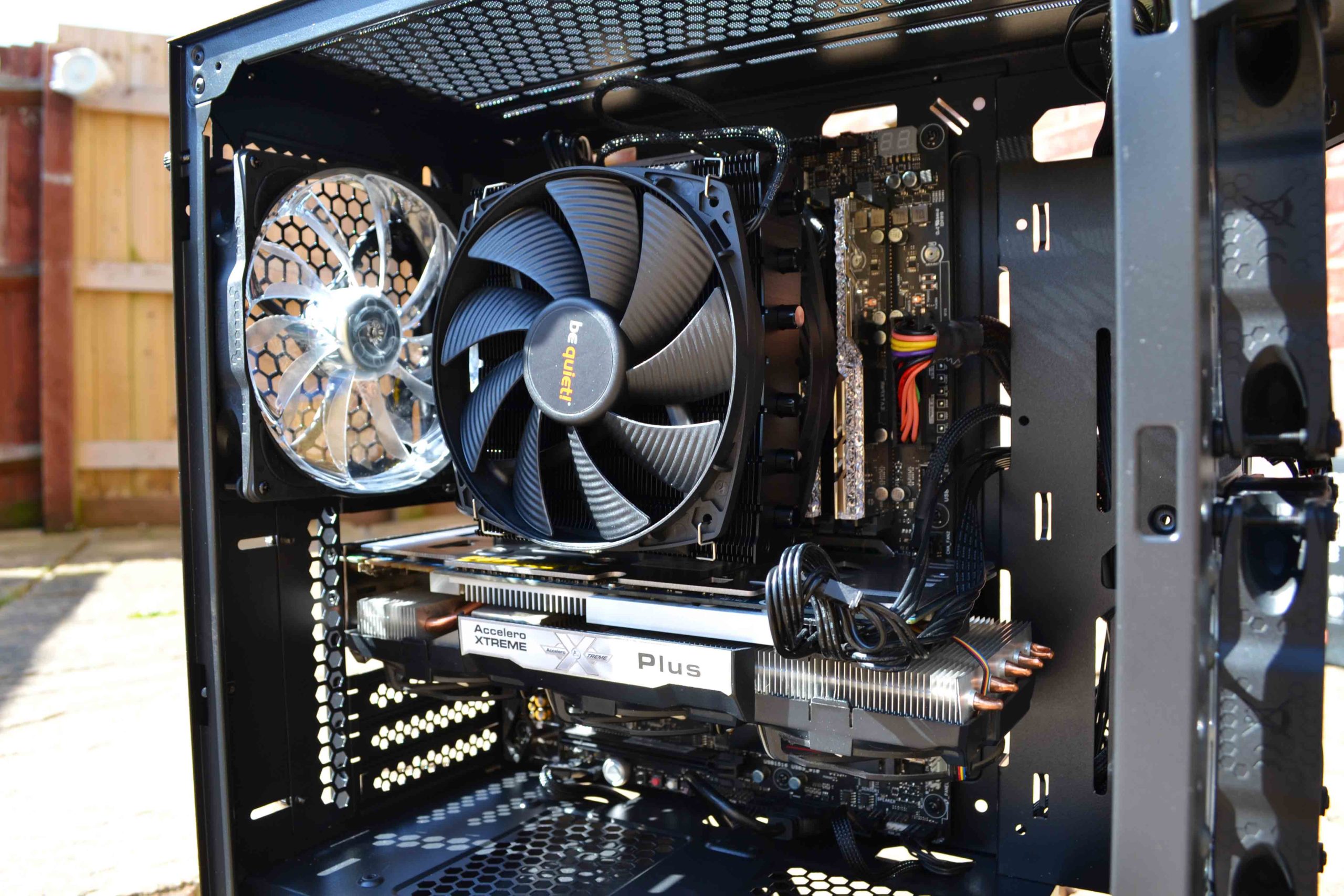 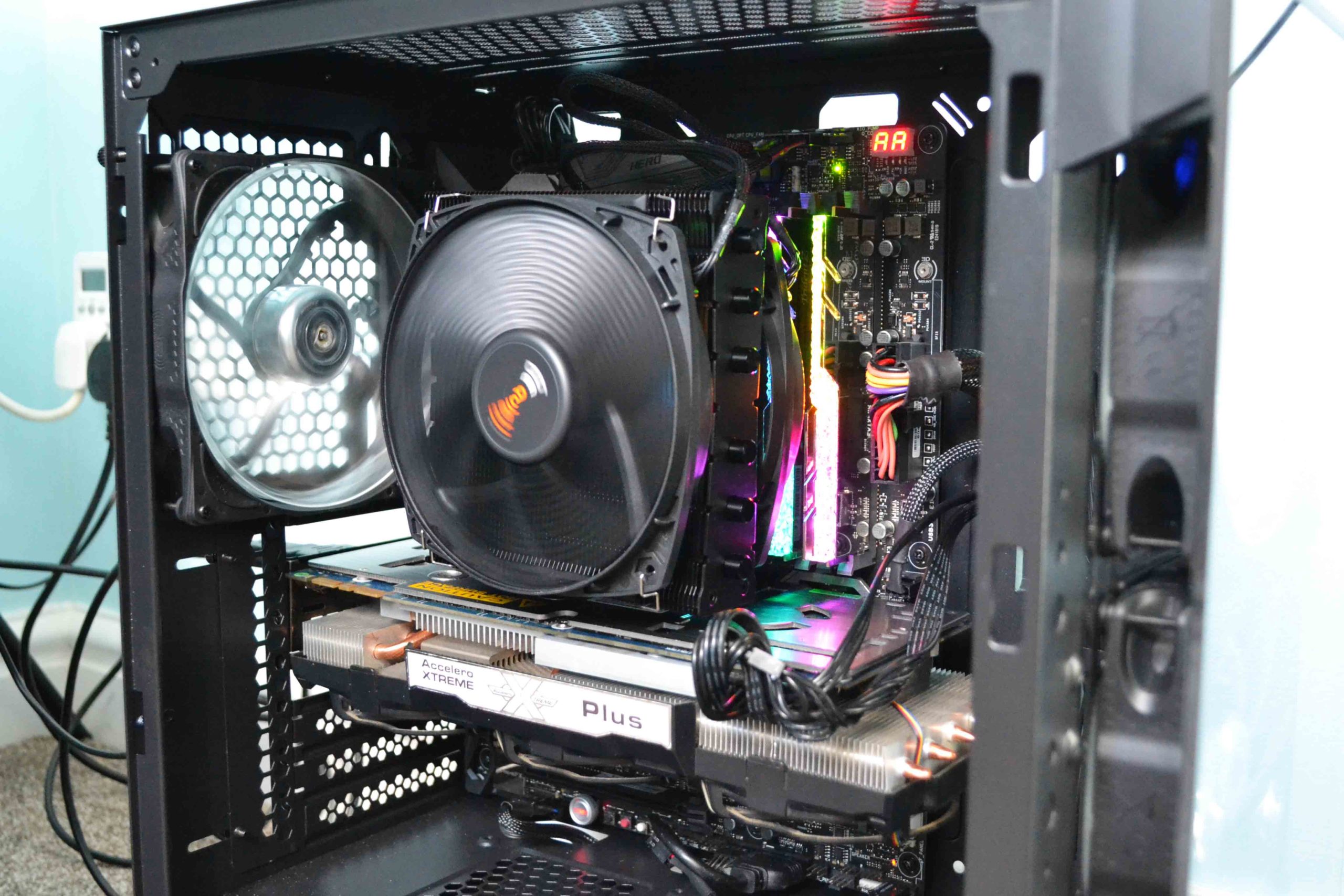 Let’s start in order of CPU load difficulty. First up is the Cinebench R15 test. On the left is the CPU in stock form while on the right we have the results for the overclocked scenario. AMD recommends don’t go higher than 1.375v for daily safe use the 2nd generation Ryzen CPUs. We managed to get 4.0 GHz for 1.300 flat. You can go higher for like 4.1-4.2 GHz but these would need close to 1.4v which means I would always go for lower voltages if the increase in frequency isn’t that big.

Then Cinebench R20 is a more modern up to date multi core benchmark suite. So naturally we will see a bigger load and thus a larger temperature figure than the R15. So far the Be Quiet! TF is taking the nr.2 spot in our charts.

The easiest test today is benchmark run in Rise of The Tomb Raider which only makes the CPU use bearly 25 to 40% of it’s total computing power thus here the results will be very good across the board.

Now let’s inspect the noise levels. Noctua and BeQuiet! are the best in class regarding noise output so naturally they will dominate here as well.

The BeQuiet! Dark Rock TF is impressive ! Considering its big and small heatsink combo, it definitely did the trick in both areas where it counts the most for air cooling – low temperatures and low noise output. So good that it becomes second best across the board.

The only issue with it may come from RAM height clearance but at 49 mm you would have enough for most builds. You can remove one fan to increase it to 71 mm but then you will loose some cooling performance. Also while it’s installed it’s hard to access the first memory slots without taking out the second. One final note, the mounting system needs a revision since it has too many parts which in a way is understandable since it offers support for so many sockets, but nevertheless, it requires the motherboard to be outside the case.

The Dark Rock TF excels at very low noise output while offering very good cooling performance making it the best top down cooler out there. For the money, this is a solid choice but just be mindful when it comes to RAM clearance and the extra steps to install it.

– Needs an updated simplified securing bracket system – way too many parts
– Hard to install while the motherboard is in the case.

Glob3trotters “Recommended” Award – 4 out of 5