It’s been a while since we tested the first NVMe QLC M.2 drive and we thank Crucial for being the first in that regard, with their P1.

Now they have released the new P2 and P5 series, with P2 being the budget entry level since it uses a DRAMless controller. Then the P5 is their premium solution and their first ever SSD that will use an in-house Micron controller.

Where the P2 and P5 are different from the P1 is that they use TLC cells instead of QLC on the P1. As per the date of writing this review, the P2 only comes in two capacity choices (250 and 500 GB) while the P5 will has an extra two option, all the way to 2 TB. Nevertheless, still no words on PCI-E 4.0 x4 from Micron.

Here is the whole ‘P’ line up to have a better perspective. The P2 TLC at 500 GB costs just $5 more than the 500GB P1 QLC but it gets you a higher overall official endurance ranting of 150TBW vs 100TBW. 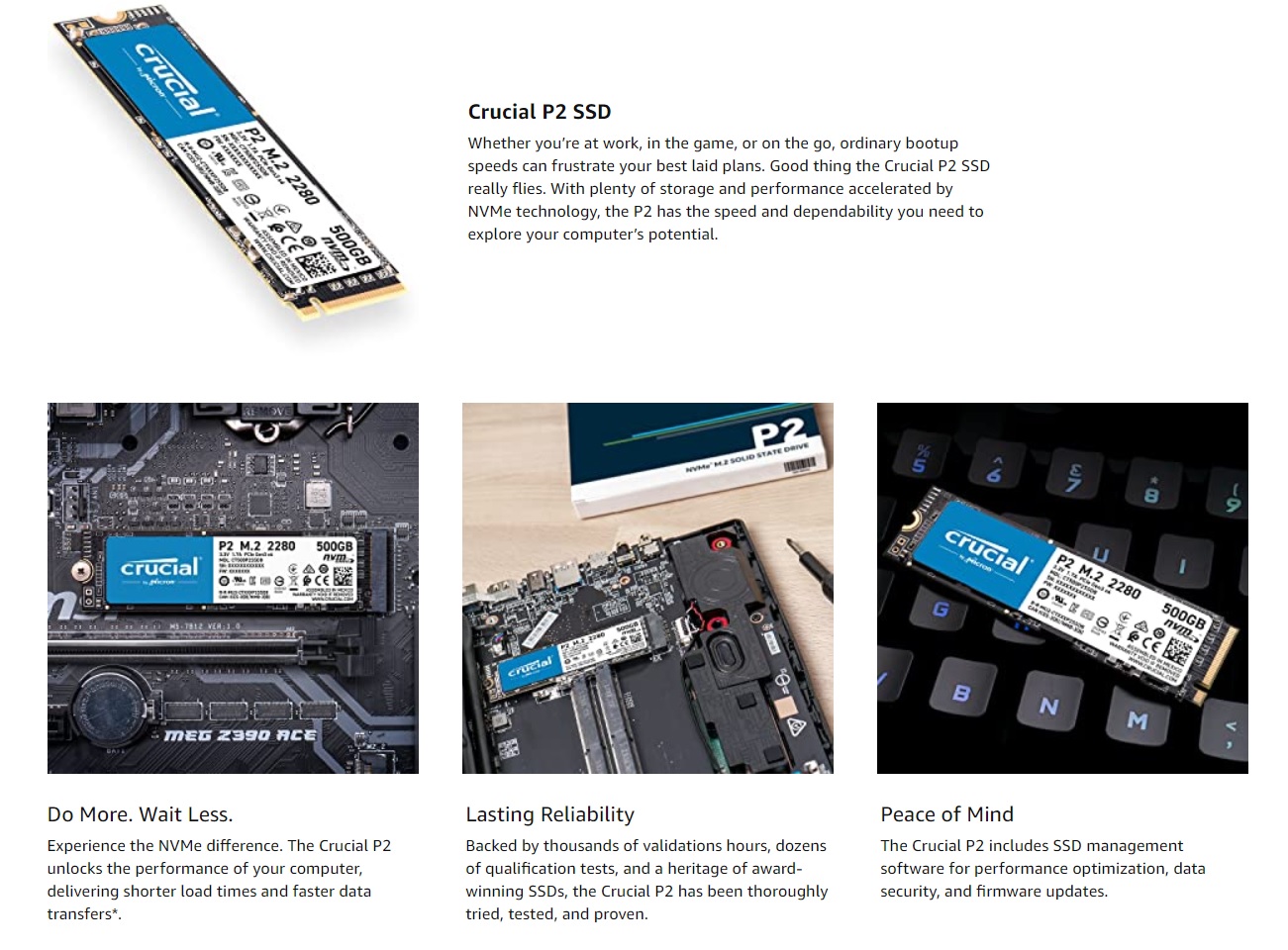 Curiously the 500GB variant has a higher seq read speed but a lower seq write speed and vice versa with the 250 GB one. This is due to the fact that Crucial plans to use TLC and QLC cells on the P2 in later variants and thus they decided to present the figures for the QLC in advance for marketing purposes. As you will see in the review we will get way higher numbers that the official ones for our TLC P2 500GB drive.

As for the official endurance ratings numbers, we have 150TBW for the P2, a 50% increase over the P1 for the same capacity. The whole P2 series as the P1 and P5 come with a 5 years warranty.

The P2 M.2 NVMe drive comes in a ‘standard’ Crucial branded box with a blue theme for it, as they do for most of their SSDs. In the lower right corner the model name is easily recognisable and on the other corner we have a sticker with the capacity.

On the back we have a small peaking hole to see the drive inside.

Inside, the P2 is perfectly safe since it resides in this plastic tray. As for the accessories, you only get a quick instruction manual.

This is a single sided M.2 2280 SSD NVMe drive which means that it is 22 mm wide by 80 long and all of the chips are on the front side which makes them perfect for upgrading laptops and notebooks as well. The front sticker gives us all the relevant information and specs.

If you peel the front sticker, you will see the DRAM-less Phison PS5013-E13T controller which has an SLC buffer of 10 GB. When this is filled, the performance will go down as it is the case with all M.2 drives of this nature. For the 500 GB model we have four Micron 3D 64 layer NAND TLC chips (NX959) of 128 GB each.

* Steps have been taken to ensure that the CPU’s power-saving features don’t interfere with any of our results. All of the CPU’s low-power states have been disabled.
* In order to minimise random variation, each of the real-life performance tests are run a few times with reboots in-between tests to reduce the impact of disk cache.
* (SATA SSDs only) Make sure you use a SATA 6Gbps capable motherboard and a matching cable to avoid bottle-necking. Then double check in the BIOS that you have the AHCI mode activated for another maximum performance tip.

First, we start with HD Tune Pro – which is a hard disk / SSD utility with many functions. It can be used to measure the drive’s performance, scan for errors, check the health status (S.M.A.R.T.), securely erase all data and much more. Here we see that the Crucial P2 manages to supersede the P1 with quite a healthy difference.

Moving to the “write” test, we get the same hierarchy, the P2 being slotted perfectly between the P1 and the 970 EVO. Here we see the extra performance in the write tests when compared to the official numbers.

Now for the file transfer tests. Here we have a game folder at over 50 GB of mixed files which will be copied onto the P2. As you would guess, it’s along way from the unofficial 1800 MB/s write speed of the drive and the moment it fills the 10 GB SLC cache, the speed goes down but to an impressive SATA 6 speeds. This is very good since the P1 for example with its QLC when it fills the cache went all the way down to a quarter of what the P2 can do. 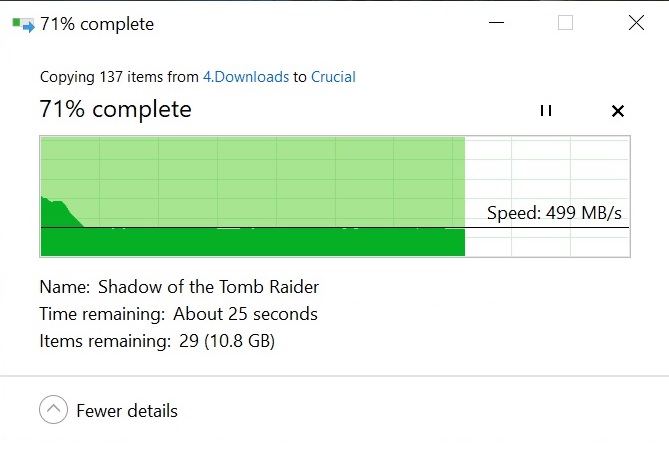 The P2 is a mixed bag of numbers and performance but overall a pleasant surprise. Despite the fact it is not meant to replace the P1, it still is an upgrade due to the fact that it uses TLC cells which are overall better in any way than the QLC.

The P1 can achieve its performance due to its extra large SLC cache of around 80 GB. But after that the QLC native performance is bearably 1/4 of the TLC in the P2. This is why Crucial has decided to publish barely half the peak write speed numbers for the P2 because they intent to use QLC cells in the future for the P2. Time will tell how they will end up.

Plus we discovered that they are running a bit cooler in full load (64C in the Crytal Disk Mark test) than the P1 (76C) and will not suffer from any thermal throttle problems.

The Crucial P2 is a welcomed addition to the ever growing market of M.2 NVMe SSD drives where most manufactures use QLC for their budget drives. For the asking price, you can’t go wrong especially that they have TLC cells (until we have more updates on the QLC ones) because they offer solid numbers and run cooler than the P1. As an entry level M.2 this is good buy!

Many thanks for Crucial for this sample !