The highlight of this product is the new NAND technology, the quad layer cell (hence QLC). It will be able to store four bits per cell with the advantage of making a price orientated SSD but with trade-offs in the overall performance and cell endurance. But as we know since TLC, there are ways to ‘supercharge’ the numbers. Crucial is not the first to the consumer market with QLC (Intel was the first and now Samsung as well has their new 860 QVO SATA SSD series) but the P1 marks Crucial’s first ever M.2 NVMe SSD.

Today is going to be very interesting.

Crucial, as of the time of the review, is offering a 500 GB model and a 1TB variant (as per our test sample)
with plans in the future for a third one, a 2TB M.2 SSD.

You can grab them from Amazon.com:

FAST CAPACITY FOR LESS.
Whether you are trying to get in the game faster or store all your precious memories, the Crucial® P1
SSD delivers. Capacities start at 500GB and scale to 2TB. Accelerate performance with the latest NVMe™ PCIe® technology. The P1 is designed to be the only storage upgrade you need — storage,speed, and dependability. Accelerate everything.

Now let’s see the main specs across the board. 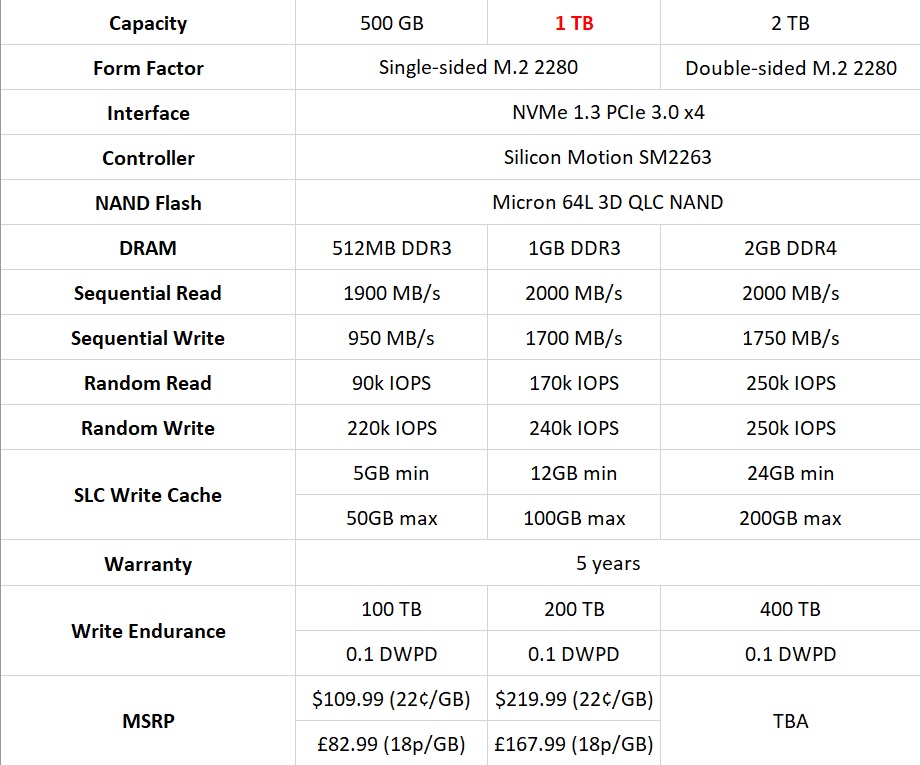 The first thing to take from the chart is that only the 500 GB and 1 TB models are single sided, which are best suited for upgrading your laptops; some will not fit the double sided variants for example.

We noticed a big difference (almost double) in the theoretical maximum write speeds between the 500 GB and the 1TB models, from the 950 MB/s to 1700 MB/s respectively. The endurance also scales perfectly, being double again from 100 TB to 200 TB. Nothing breathtaking but good to see a 5 year warranty tag on them.

The most important part is the SLC cache which is variable. This is a mission critical feature because QLC cells natively will struggle for high performance numbers. We know this story from TLC SSDs but here they have a higher impact. That’s why the SLC cache is variable (up to a certain point but way higher than TLC SSDs) with the purpose of doing everything is its power of not getting filled up. When that does happen tho, the write speeds will suffer greatly. How much, we will soon see.

As most brands, Crucial has their own template for box designs. Here is no exception. There is a big “P1” written on the front so you can’t mistake it for any other product.

The back gives you a slight peak inside so you know an M.2 resides. Also the 5 years warranty tag is more than welcomed.

The P1 is nested securely in this plastic tray and you only get a quick instruction guide.

Pealing the front sticker, reveals a Silicon Motion SM2263ENG which is specifically made for the new QLC flash. Then next to it there is a 1GB DDR3 DRAM chip.

The 1TB P1 is single sided which means the back part is empty. Ideally for ultrabooks, slim laptops etc.

– Synthetic and real life tests.
– All test subjects have identical content.
– All SSDs were secure-erased before our tests started
– Steps have been taken to ensure that the CPU’s power-saving features don’t interfere with any of our results. All of the CPU’s low-power states have been disabled.
– In order to minimize random variation, each of the real-life performance tests are run a few times with reboots in-between tests to minimize the impact of disk cache.
– SATA SSDs only: Make sure you use a SATA 6Gbps capable motherboard and a matching cable to avoid bottle-necking.Then double check in the BIOS that you have the AHCI mode activated for another maximum performance tip.
– SSDs that use any form of fast cache: We flushed the cache between tests.

Competition and other storage subjects: 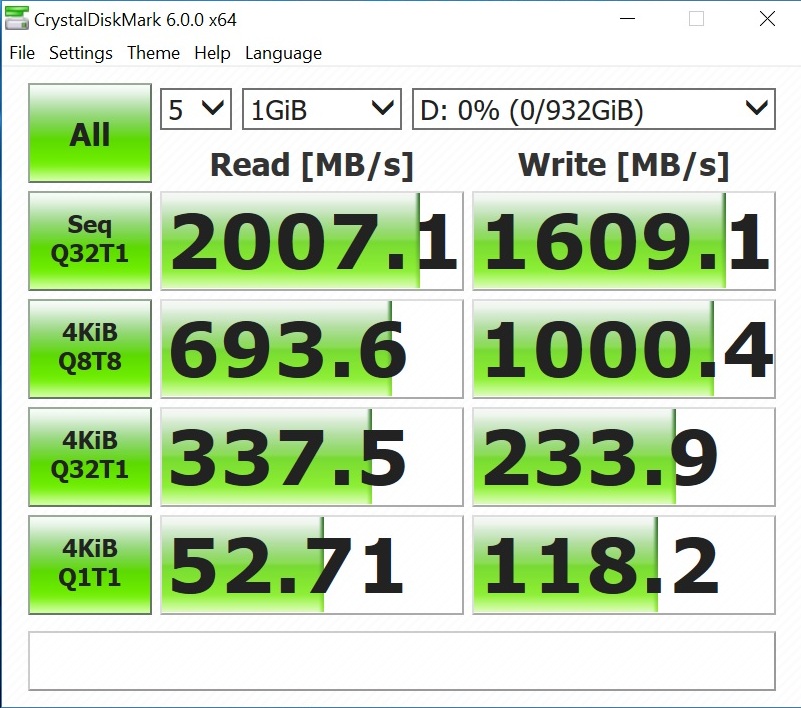 We see the full advertised theoretical number speeds. For a better overall perspective, have a look here for the main sequential read and write with multiple threads and ques when compared to our other test subjects. 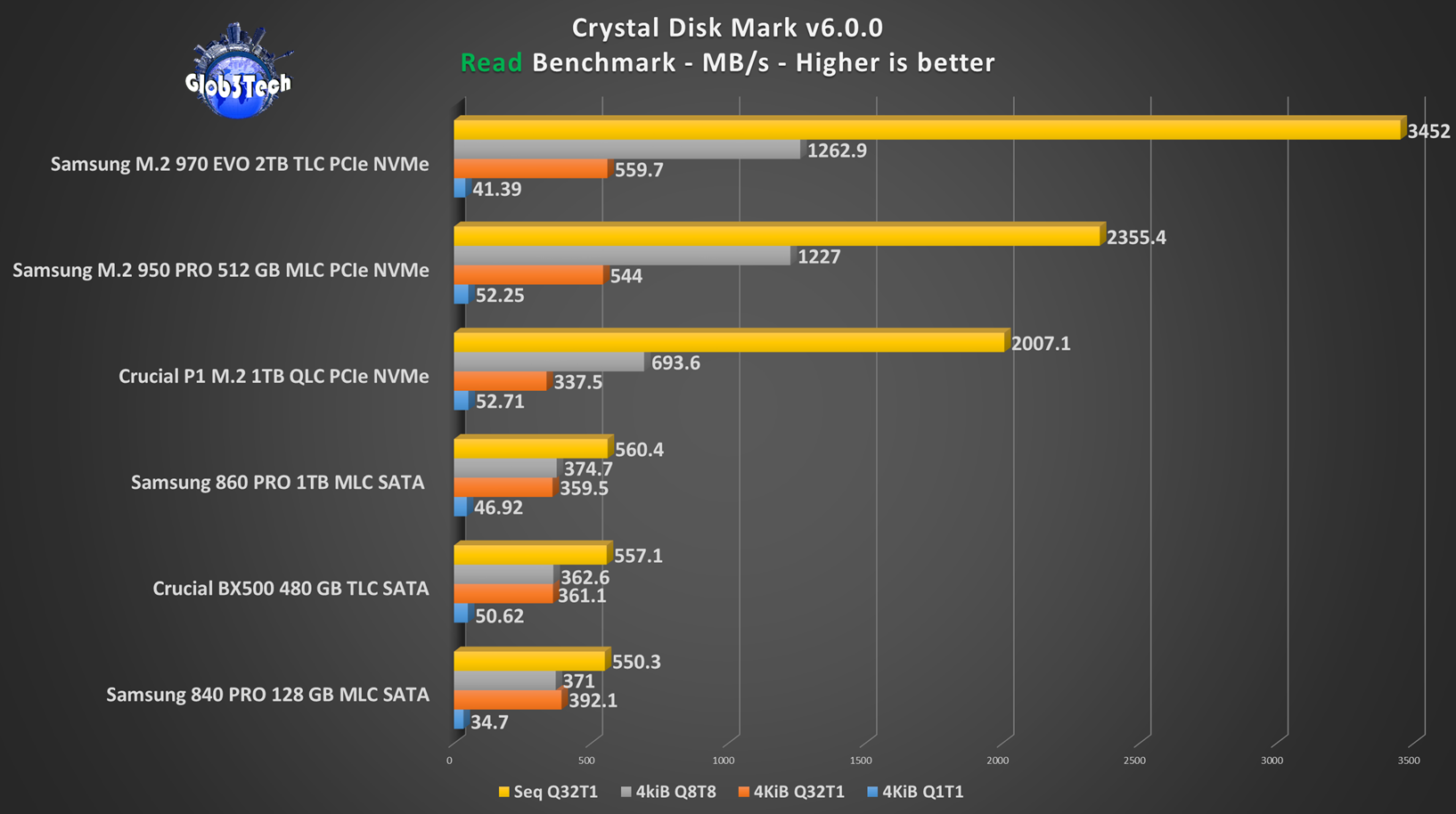 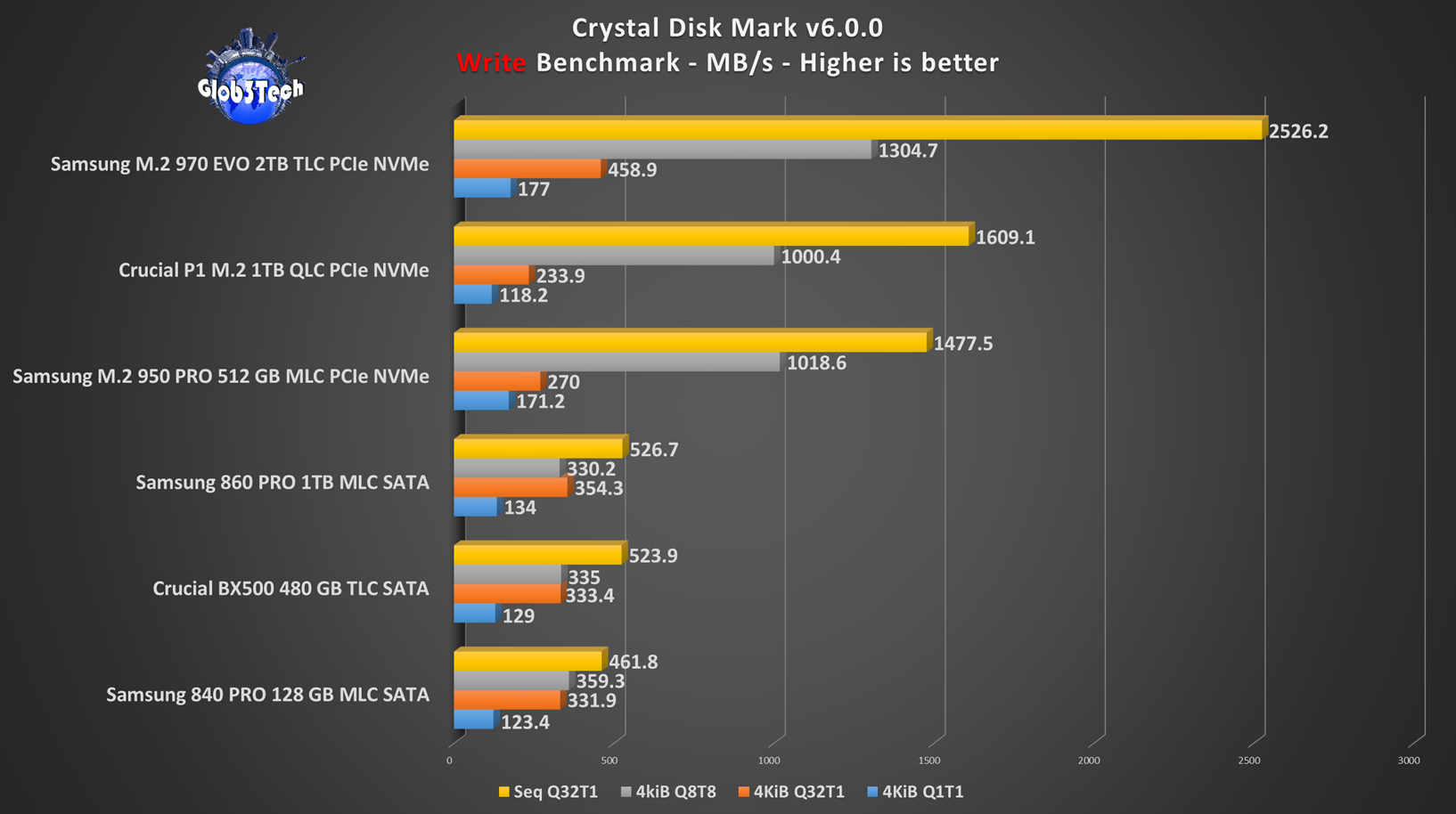 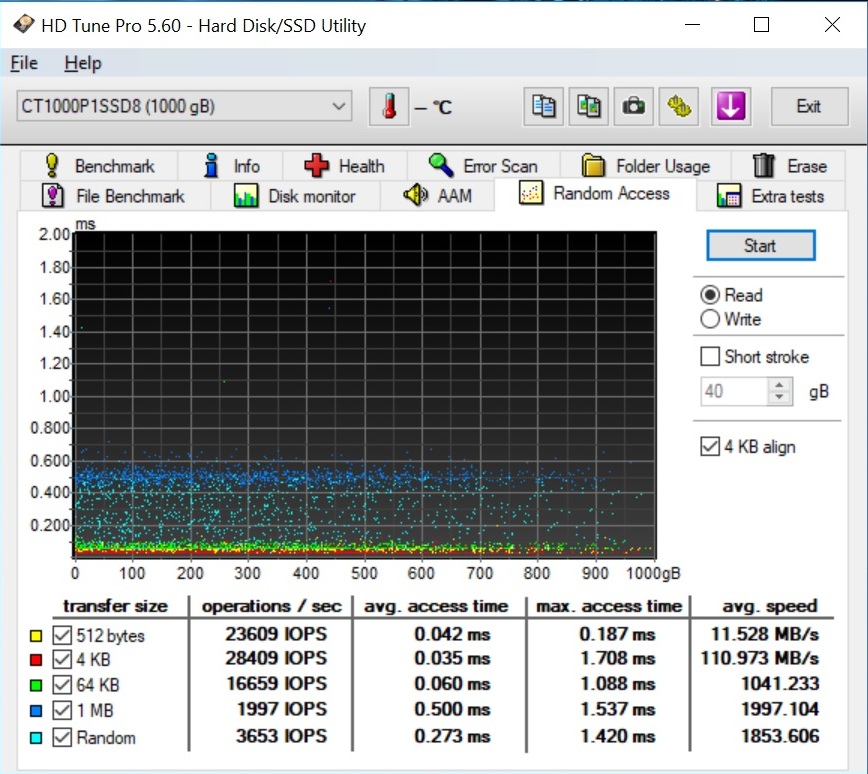 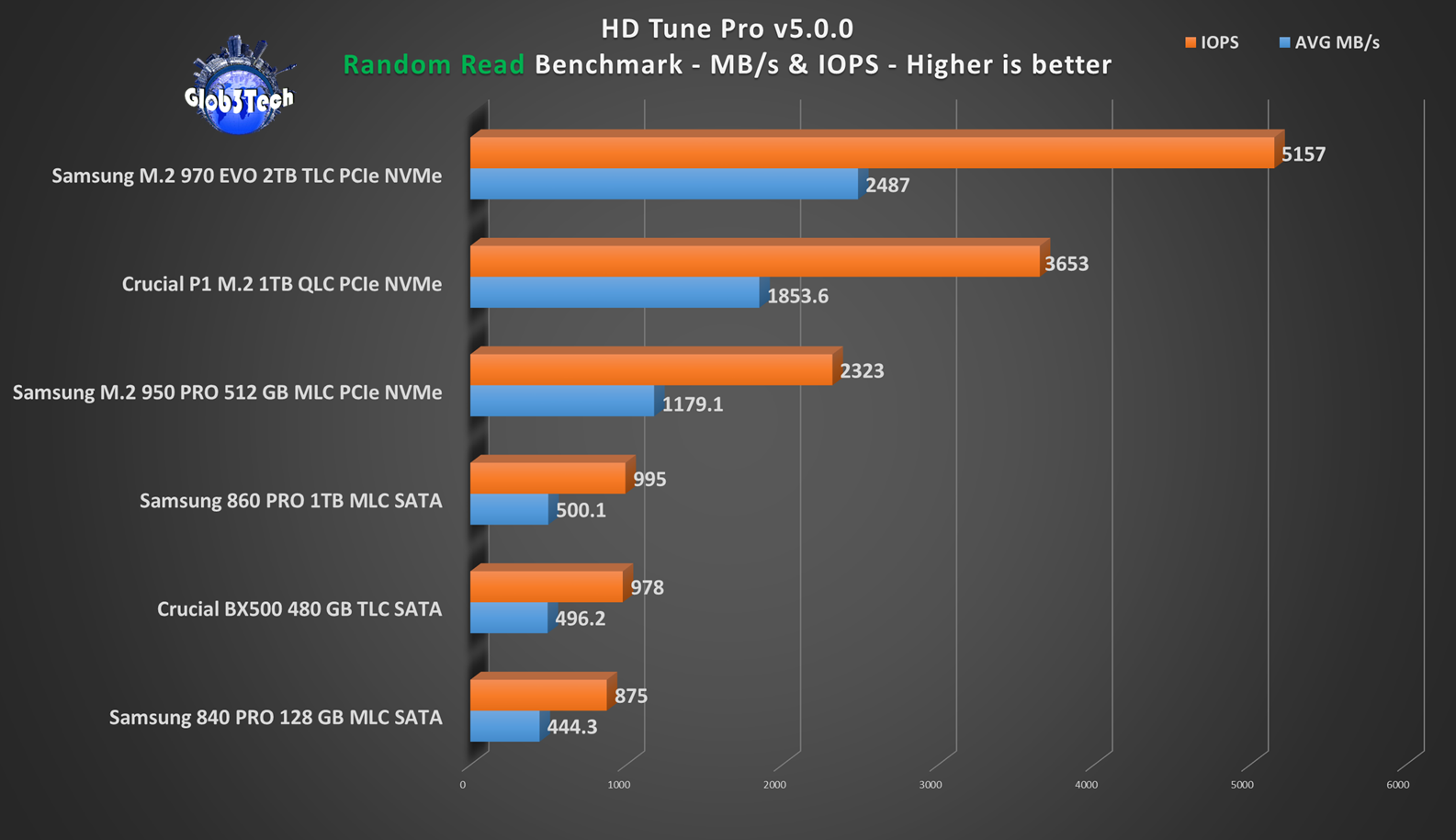 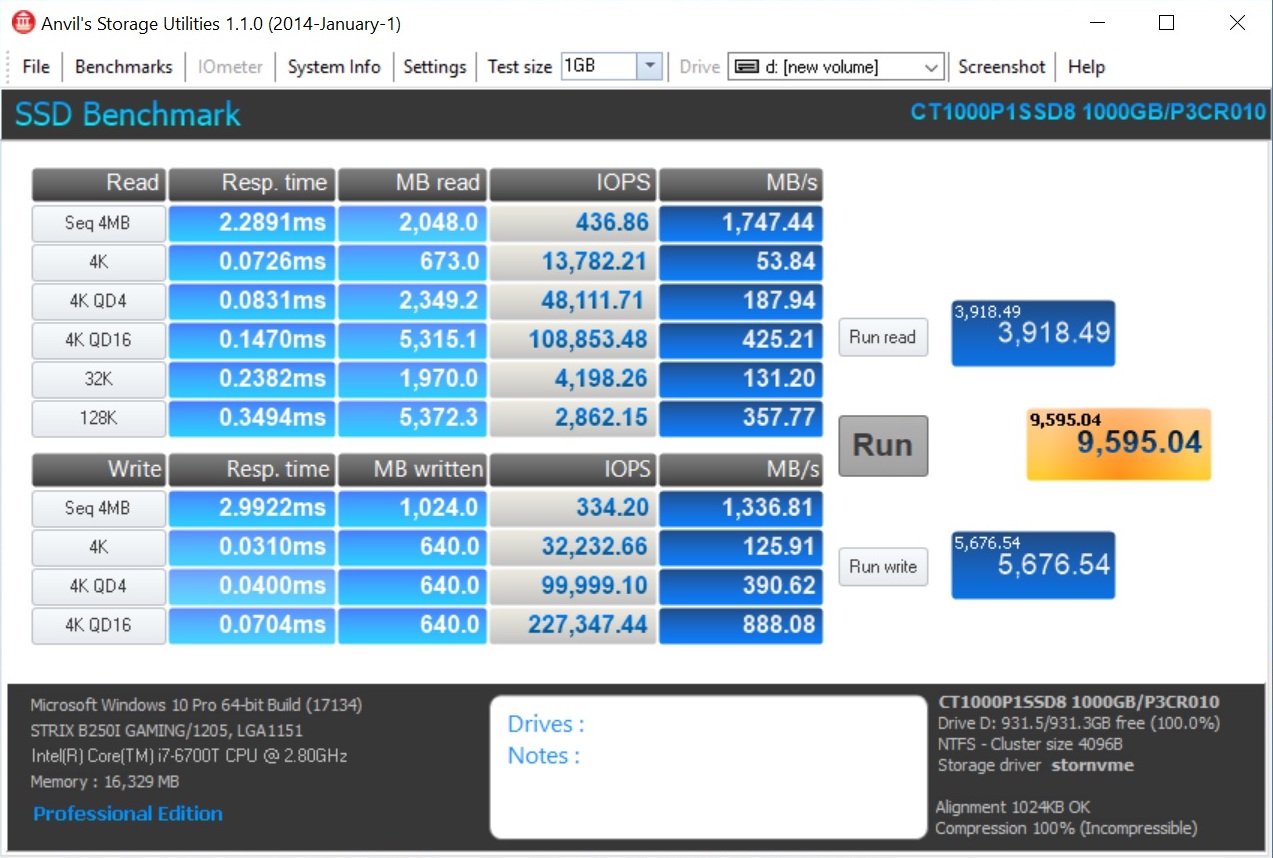 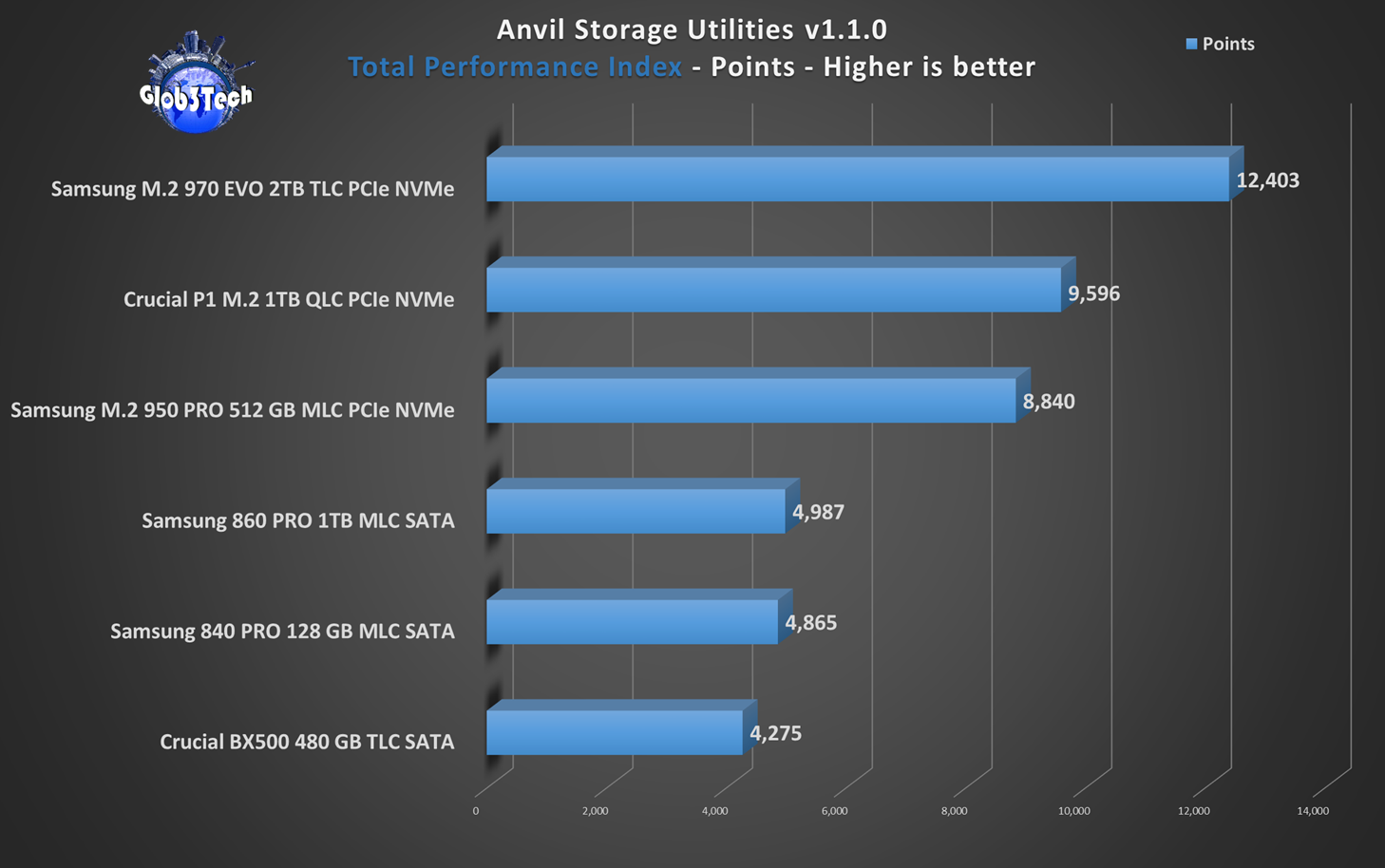 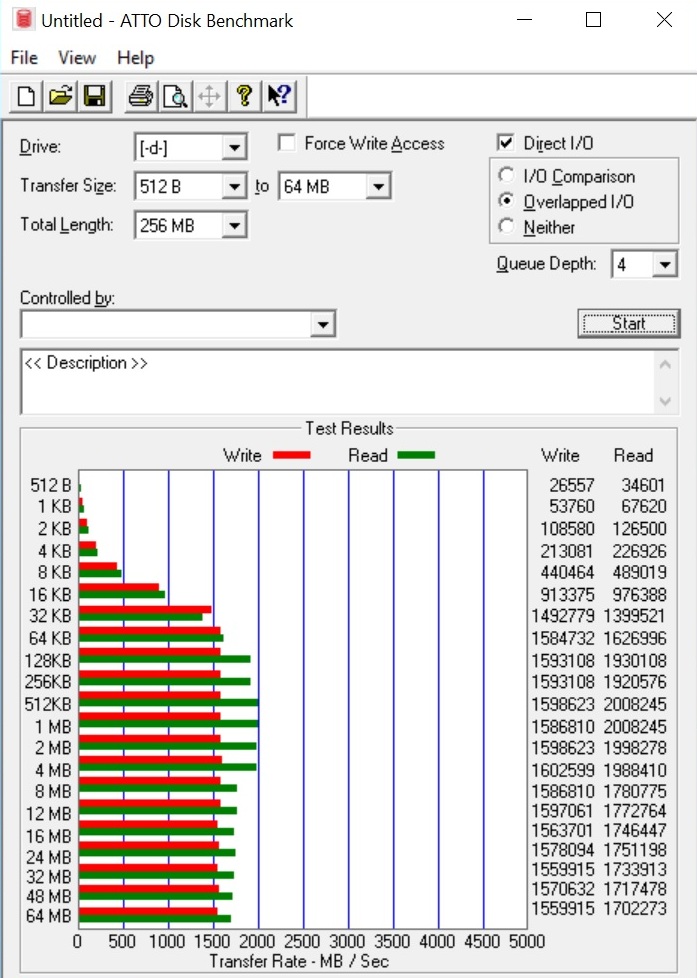 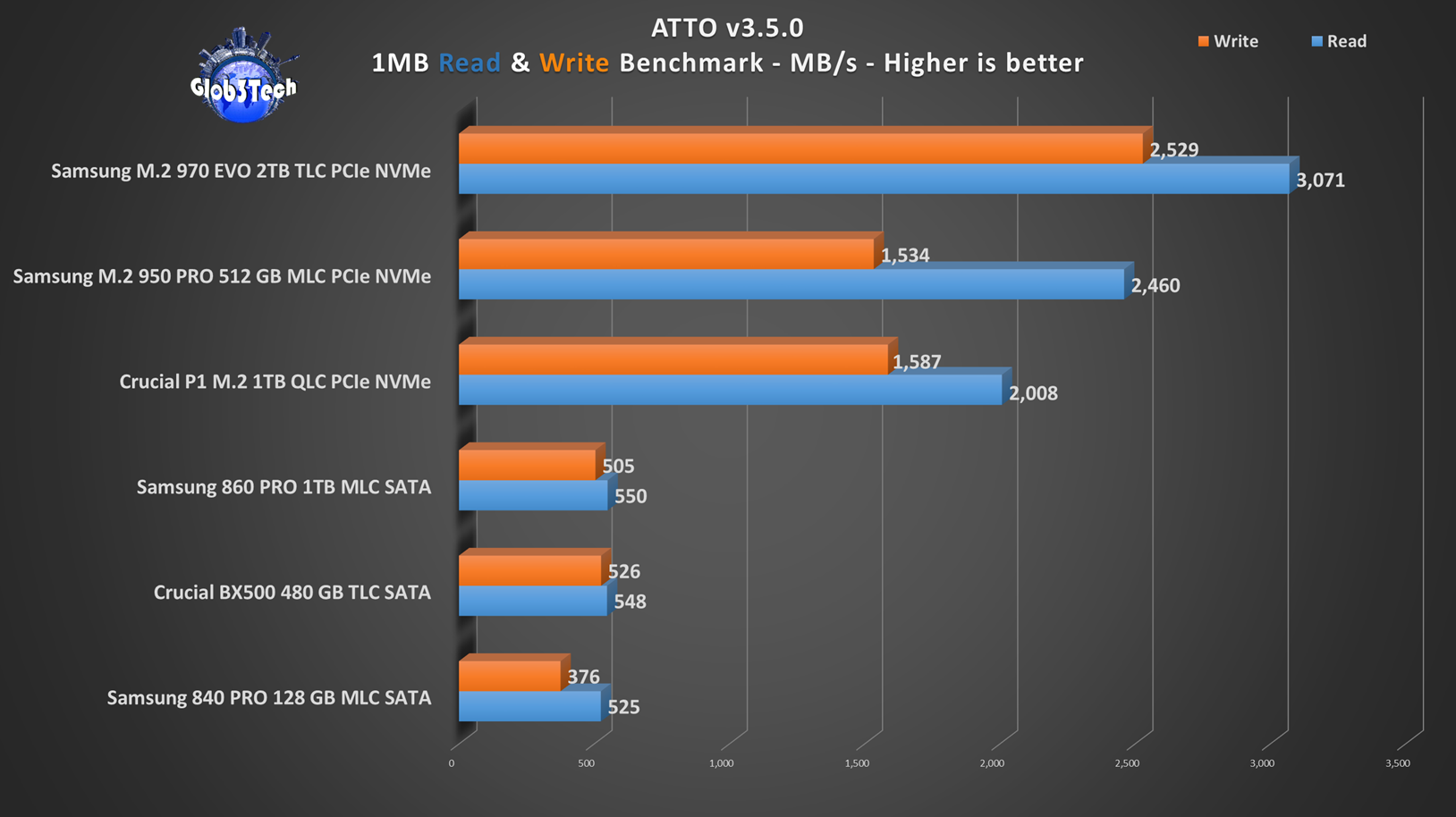 Now for the file transfer tests. Considering the fact that we know that the Crucial P1 has a very big cache (up to 100 GB), this was the most important test, to see what happens to the QLC cells when the cache fills up.

First, we took a 60 GB .iso file. All the way through, it maintained a little over 1200 MB/s for the writing speed which is very impressive. 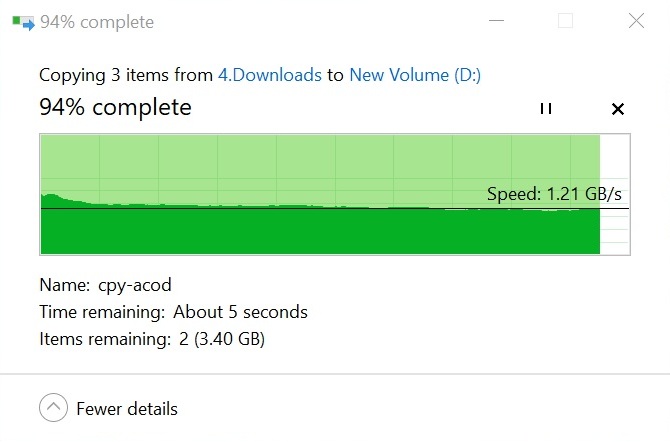 Now, for the moment of truth. A transfer of 120 GB of mixed files. Even with a mixed load, it still averaged above 1 GB/s. 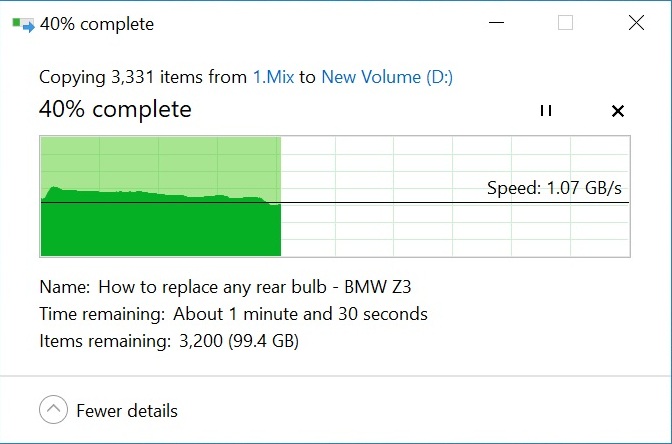 Finally when the cache fills up, we got barely 100 MB/s. So there you go, QLC cells will match a 7200 RPM HDD when the drives cache fills up. Mind you, in day to day real life operations, this is very unlikely to happen, only if you are actively trying to do this. Still, this is a possibility and everything is very depended on your workload and needs. 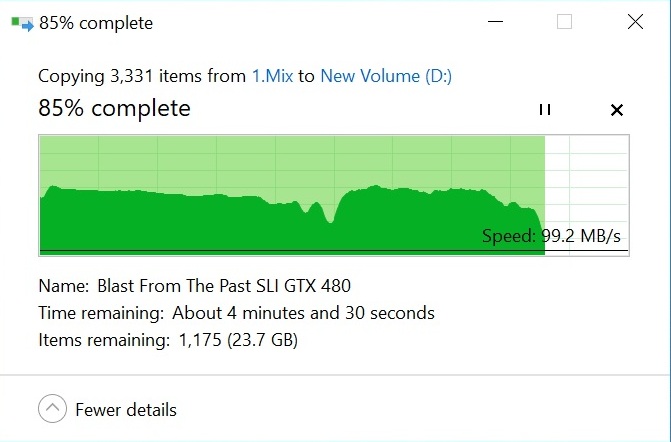 This is new technology and the scenario repeats itself as we saw before with the TLC cells when they first came out into the market. The Crucial’s P1 handles itself pretty good in most synthetic tests being toe to toe the with the Samsung 950 PRO which uses MLC cells. The 970 EVO at 2 TB is just no match for almost anything since Samsung is a clear leader in that segment.

The most important parts for us to understand is the P1 delivers what it promised, a very affordable and performing M.2 NVMe, as long as you don’t fill up the cache. Given its generous variable cache up to 100 GB for the 1 TB model, in day to day tasks you will never achieve this only if you transfer high volume of data. For that scenario, then a Samsung PRO is what you need.

Crucial is offering the P1 for a good price which performs overall really good in any scenario. Again, only as the cache isn’t filled. So far Samsung and Intel are offering QLC SSDs as well and it will be a battle of the prices mostly since Crucial’s has them priced just a few cents/pence higher than the competition. (The Crucial P1 is 22 cents per GB and the Intel 660p M.2 is 19 cents per GB for example)
The Crucial P1 is a great choice to have if you need a cheap but faster solution that the SATA SDDs coupled with the elegance of the M.2 format.

Glob3trotters “Great Choice” Award 4.5 out of 5

Many thanks for Crucial for supplying us this test subject !