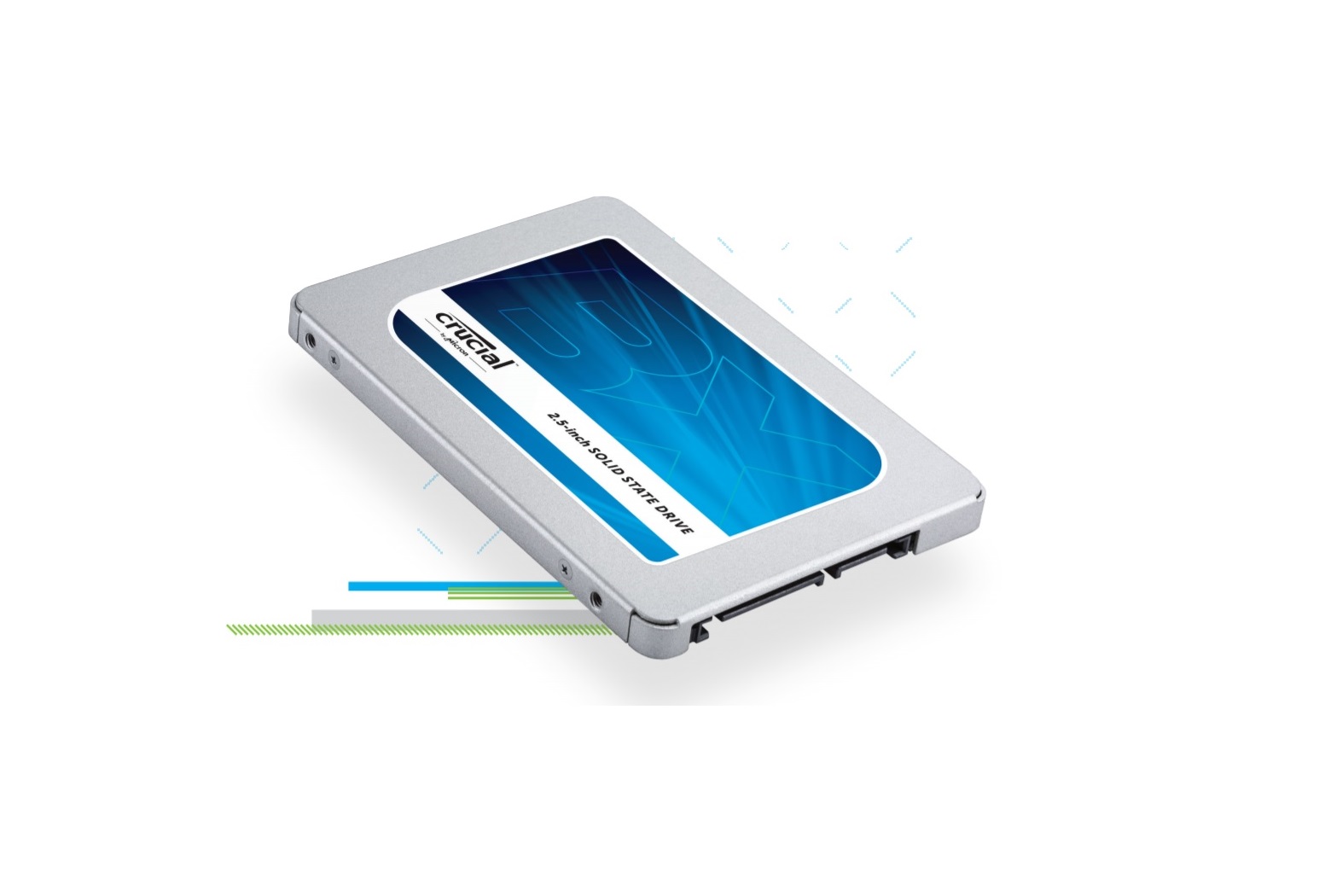 Well another year, and yet another SSD generation release from Crucial. The new BX300 series is labeled as a strong value for money offer but without sacrificing overall quality and performance. They claim up to 555MB/s for sequential read and 510MB/s on sequential writes. Random 4K IOPS show numbers in the 95K for both random read and write. For now they will come in 3 size flavors: 120, 240 and 480 GB.

What caught my eye was the fact given the price range, despite the competition which uses TLC grade level cells, the BX300 series is built upon MLC cells which should give them a clear advantage in endurance and sustained speeds. We shall see about that.

As per any SSD when compared to a regular HDD, when you upgrade to new solid state drives, you will see exponential results. They are that revolutionary. Thus sometimes you don’t even need to upgrade your entire system, just pop in an SSD. This is even more consistent when upgrading your laptop because they tend to use lower RPM hard drives. 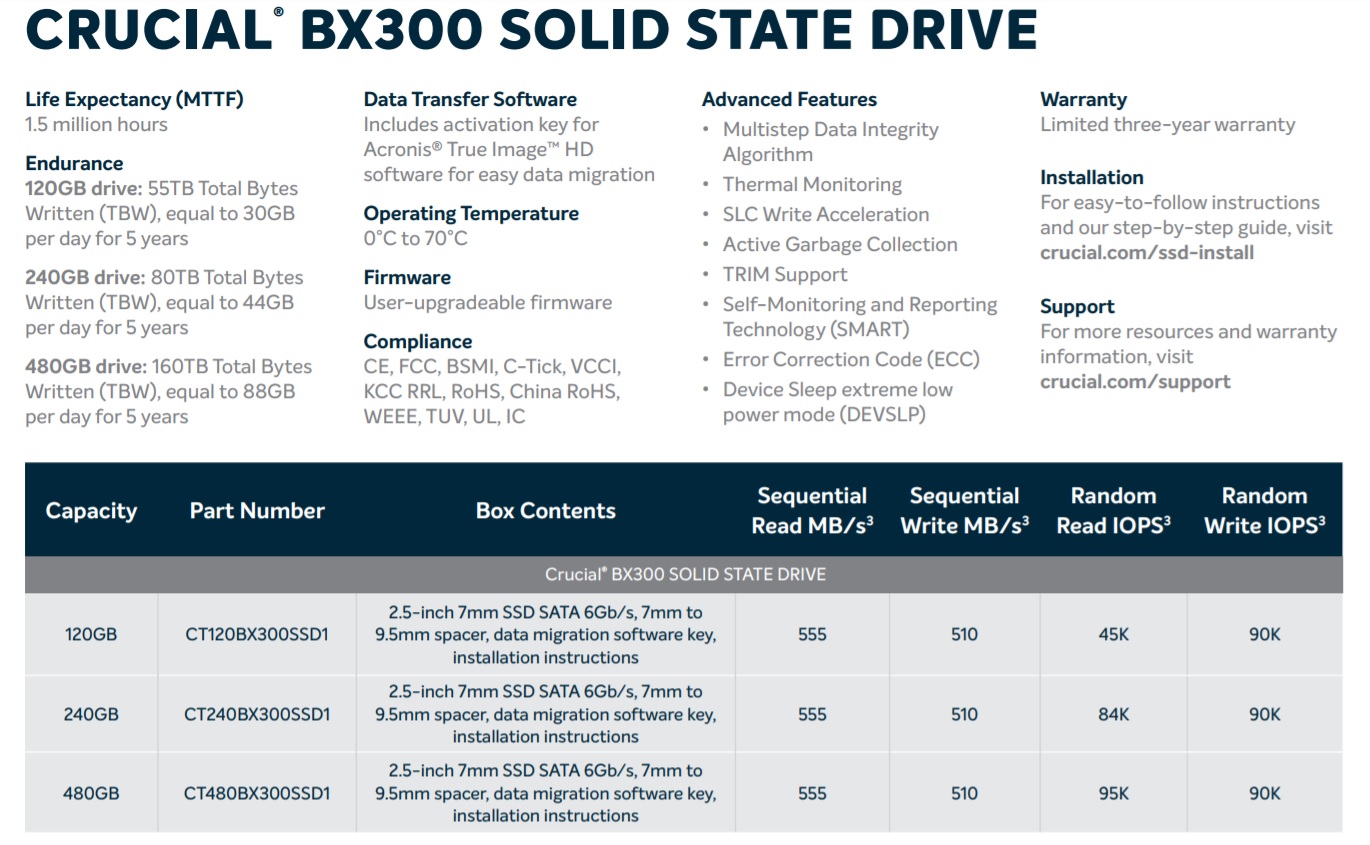 Well we need to point out that the BX300 series as stated will be fitted with Triple level cell written NAND flash memory from Micron’s 3D NAND (vertically stacked) node – their first generation of generation 3D 256Gbit MLC NAND. Thus this allows Crucial to offer high storage volume at a lower price point.

Then another key factor is the NAND ICs are driven by a Silicon Motion SM2258XT controller, plus there is the popular supercharged feature like the presents of a SLC cache which speeds up writes. But this is limited and it’s different for every model:

Basically, the SLC cache will guarantee maximum performance but when it fills up the numbers will go down. How much, let’s continue the review.

The last important part is the write endurance. SSDs have a limited life because of the way they are inherently built – the cells will wear of. But the good news is that with normal use (best case scenario) and even if used very intensively (worst case) they will still outlive the life of a system and even a HDD. Hence manufactures will give an estimate average number so you have an idea what to expect.

Again these are rough estimates and torture tests have shown that the drives will handle even more than those numbers.

Then everything is backed up with a 3 year warranty from Crucial.

OK then, now let’s see the actual drive. Crucial sent us the 240 GB model which bears the CT240BX300SSD1 internal code.

As per all previous generation of SSDs from Crucial, they have similar overall layout and box design. Very easy to see and know that it is and SSD inside and more importantly that it is from Crucial. 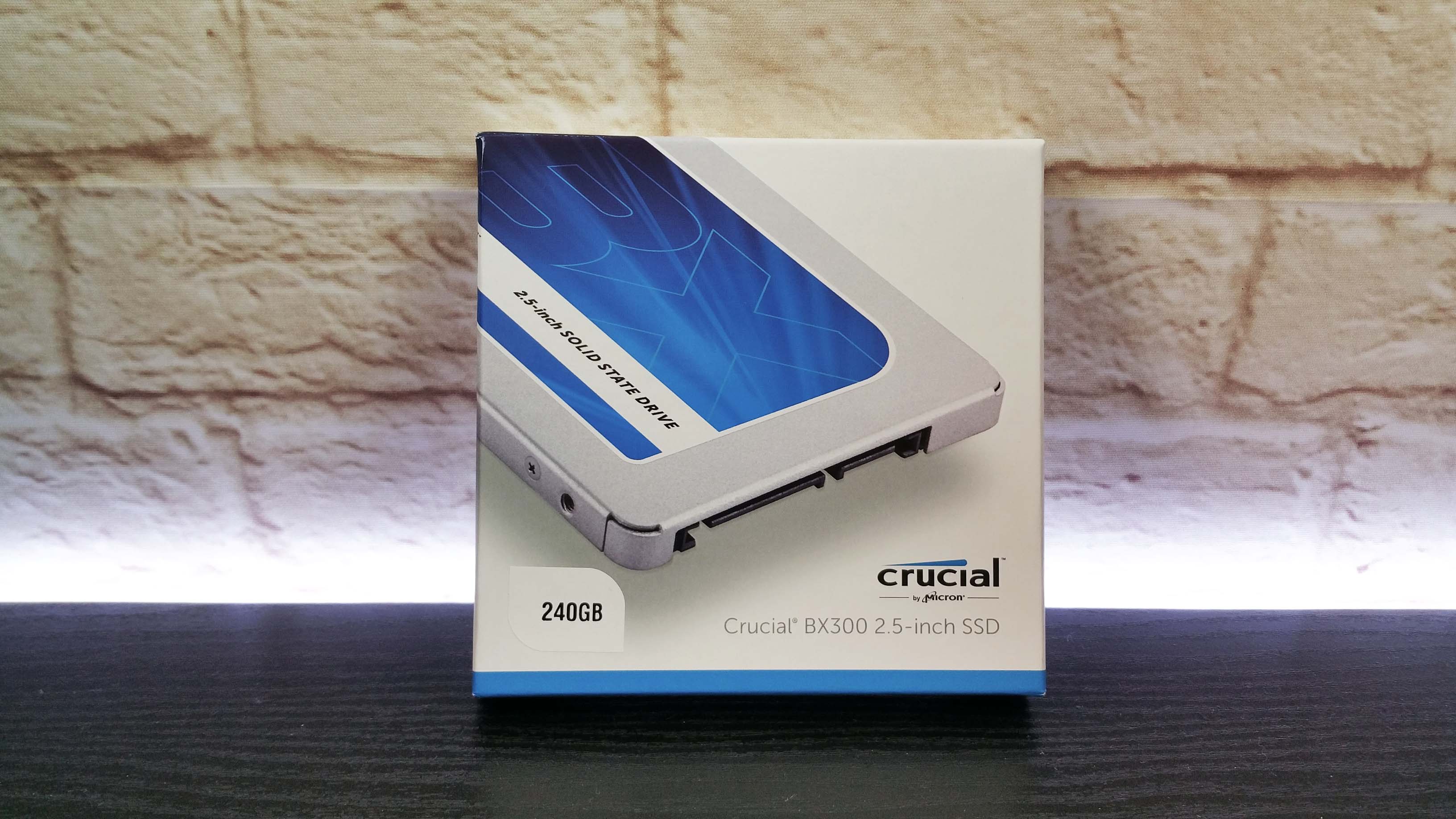 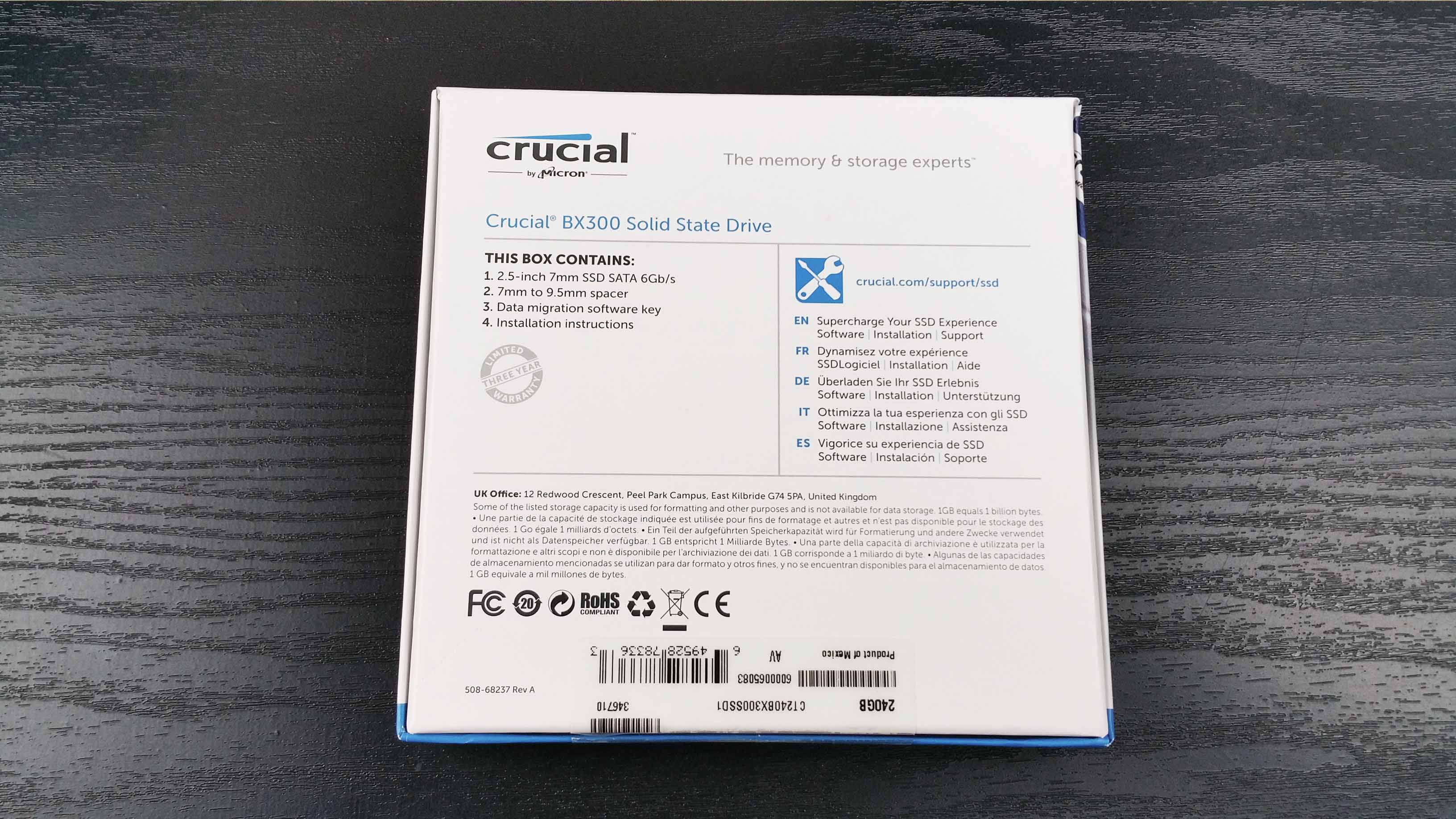 So, inside, beside the actual SSD, this is what you get: 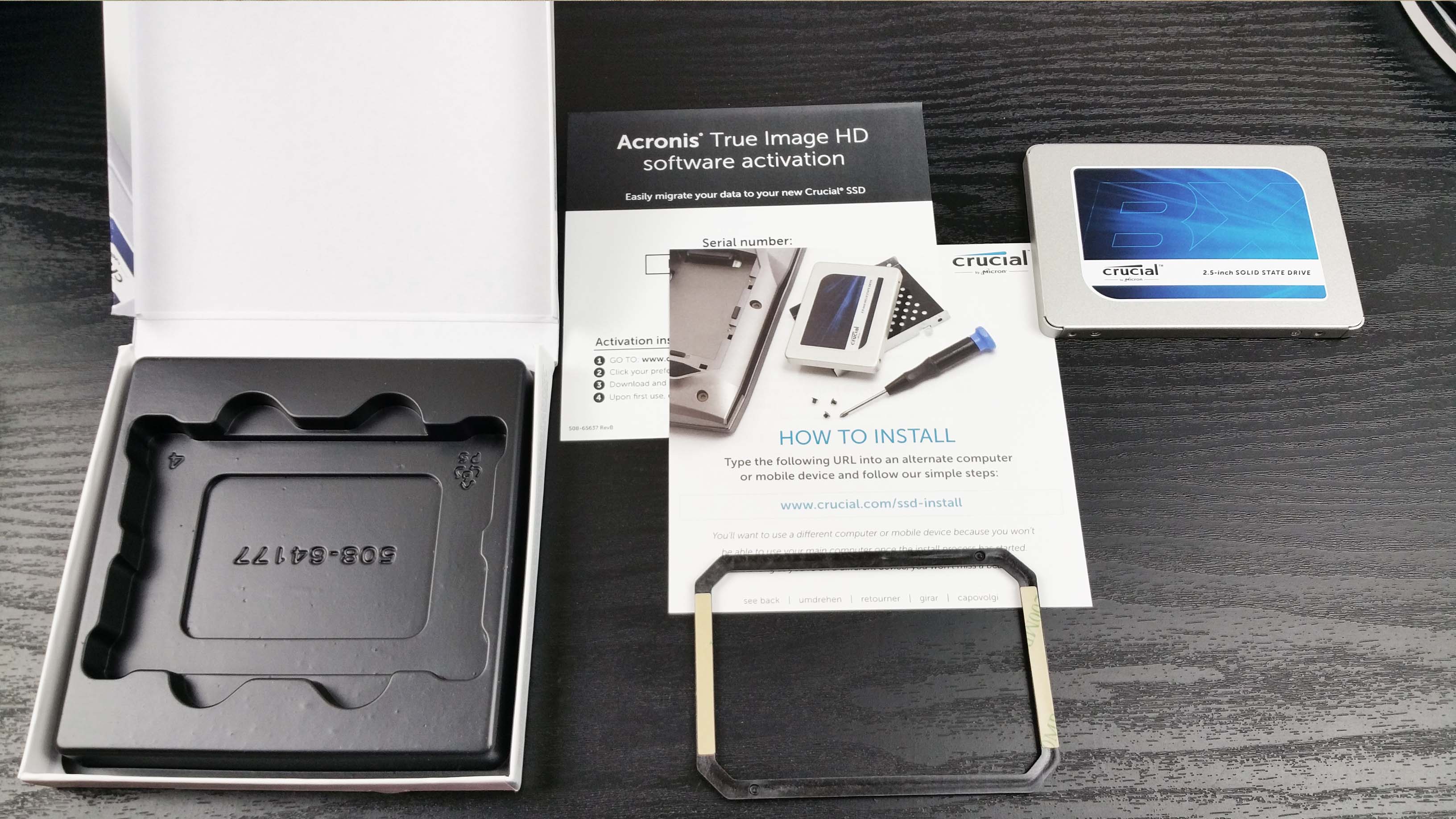 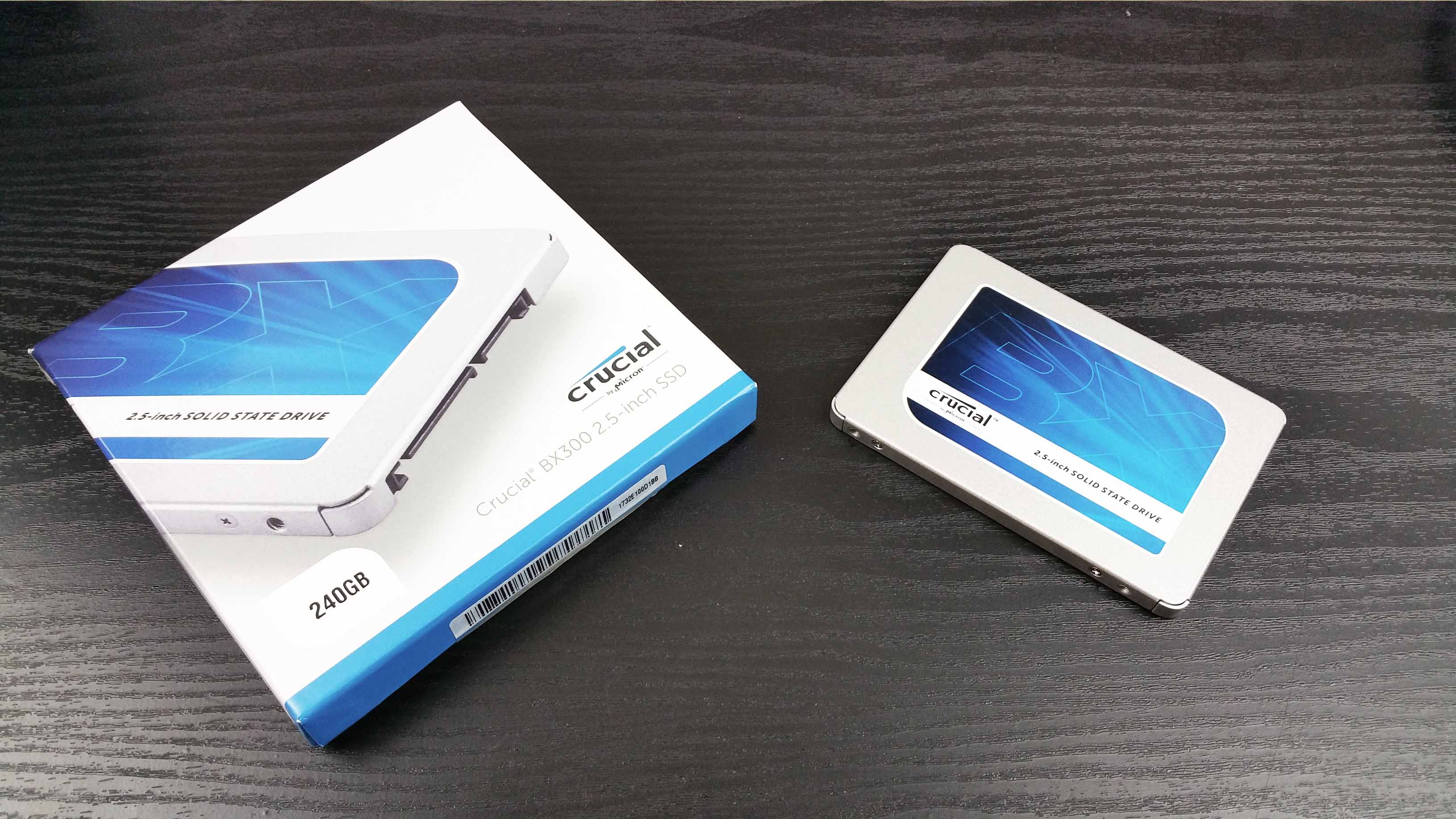 We have a full metal body with a big sticker on the top for the branding and then a quick specs one on the back. 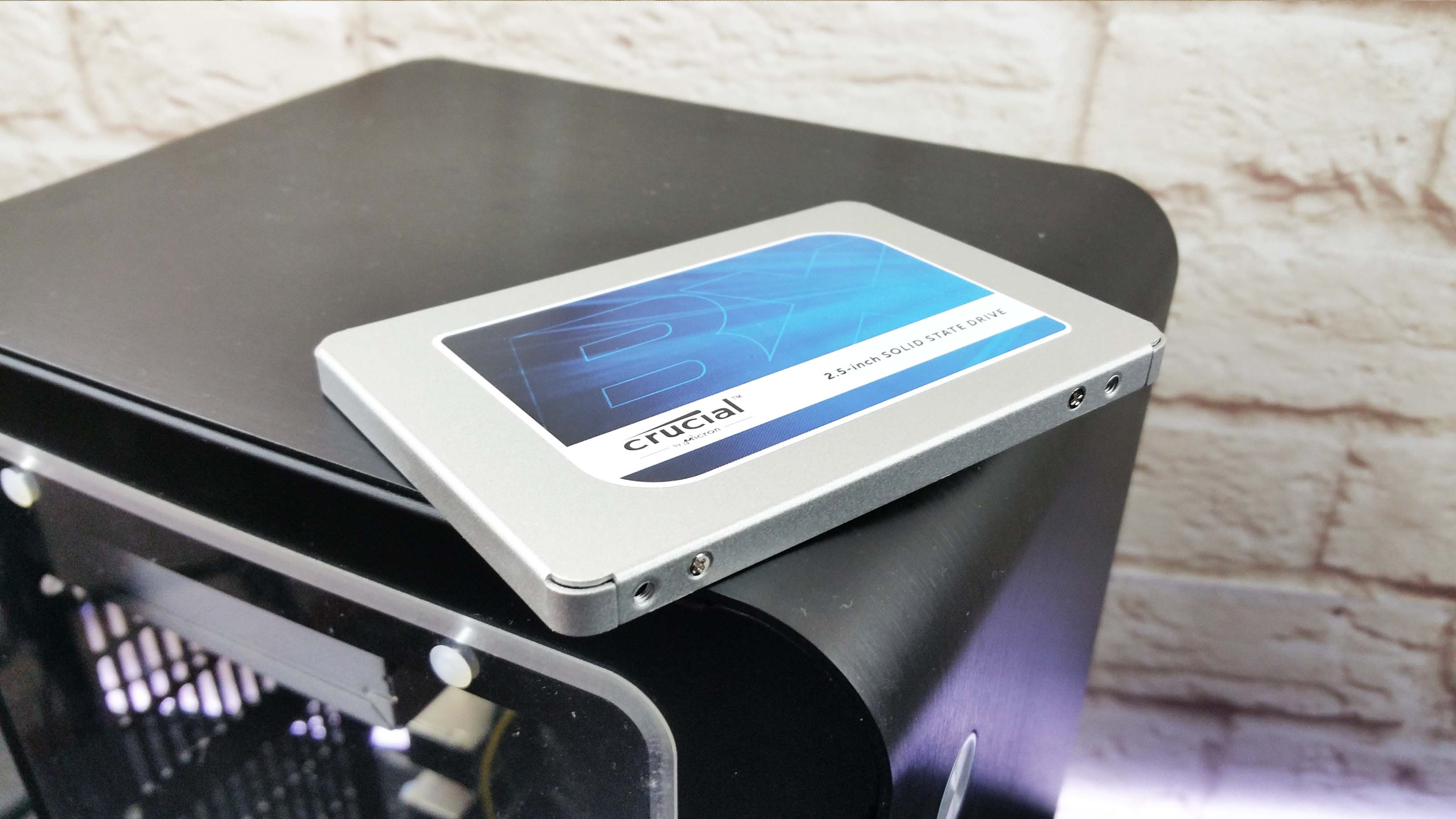 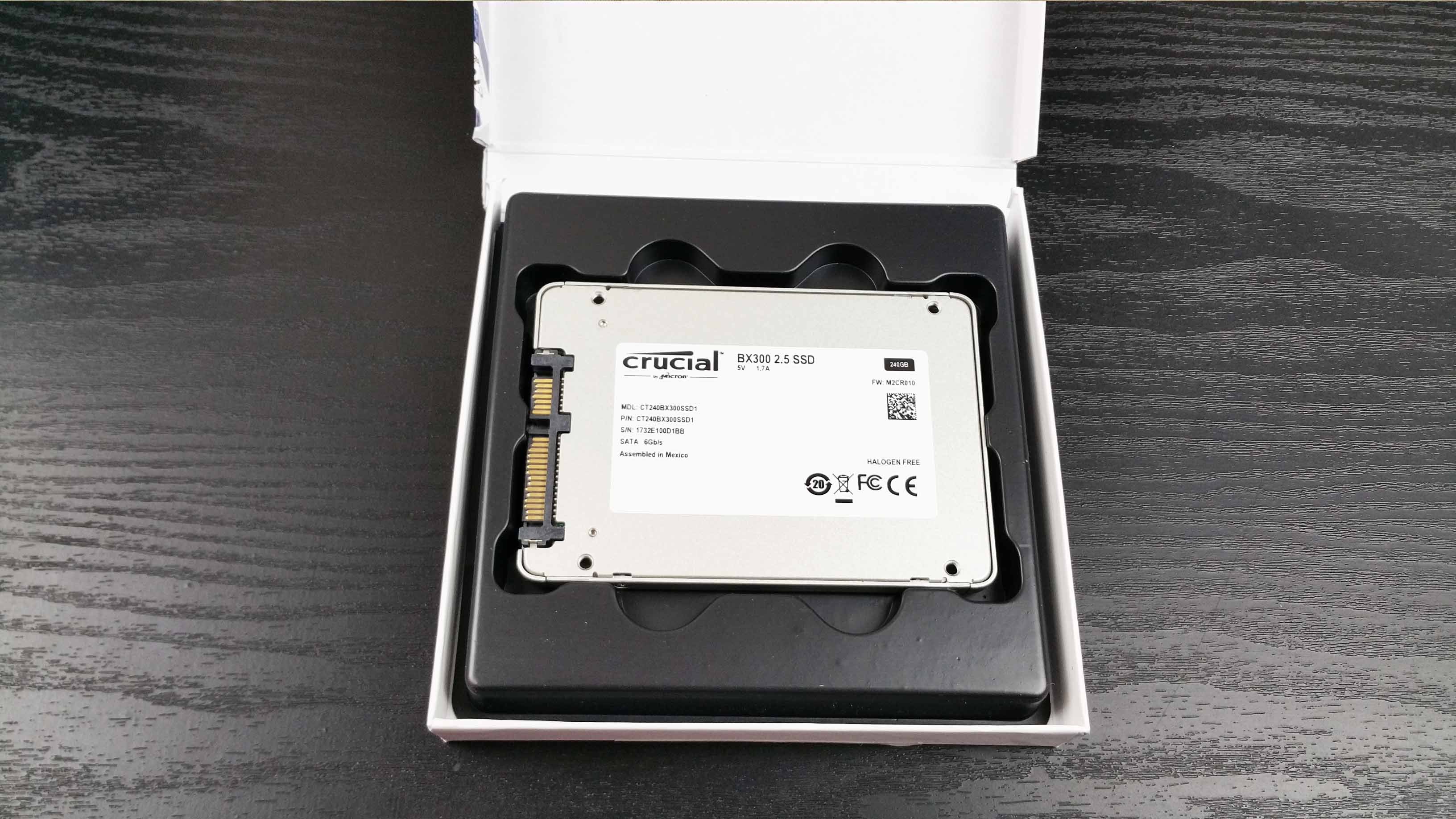 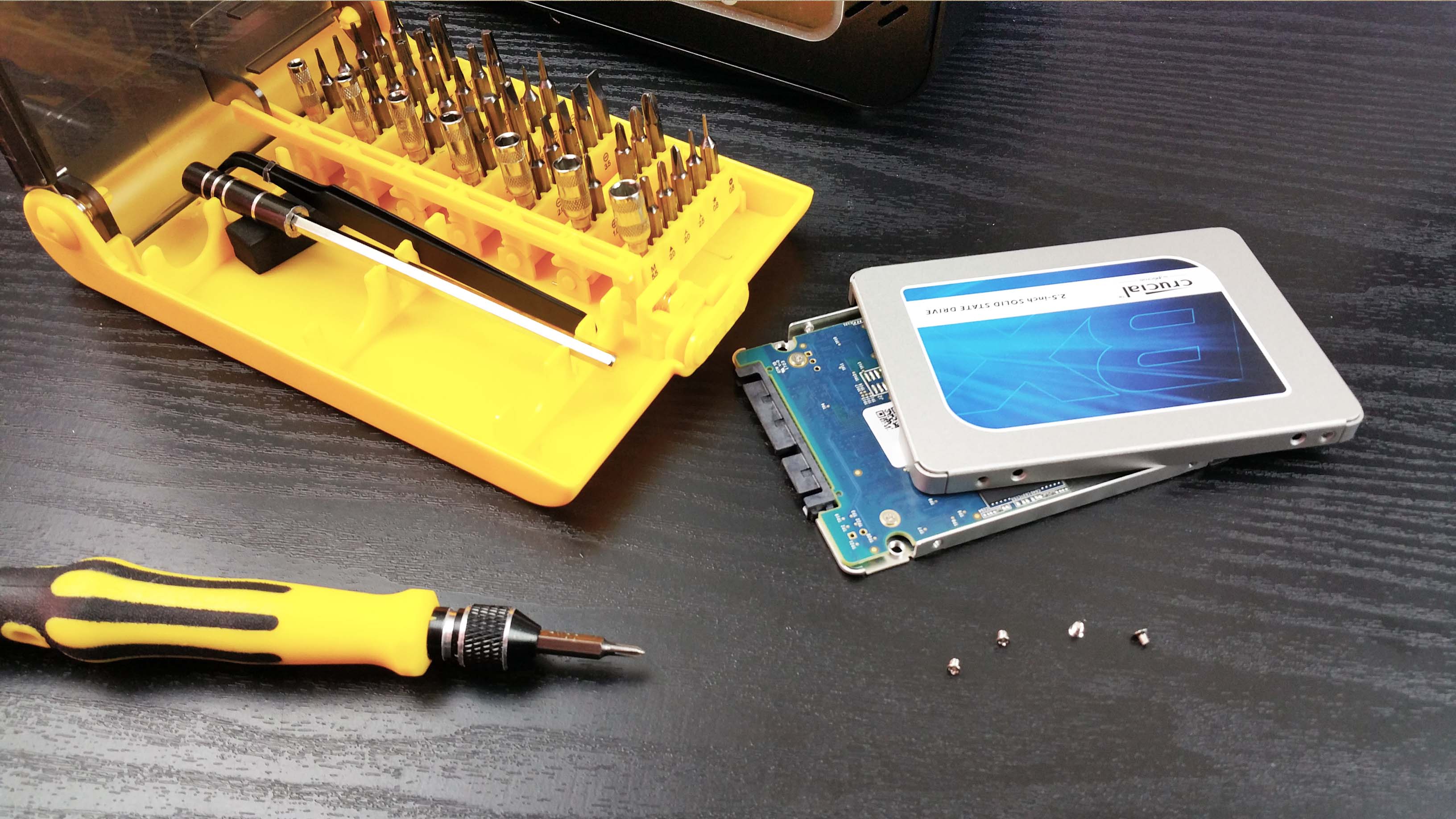 Now let’s explore what’s under the hood. Just half a PCB is present due to the 3D layering of the NAND. I presume the 480 model will have more real estate to use or more chips. 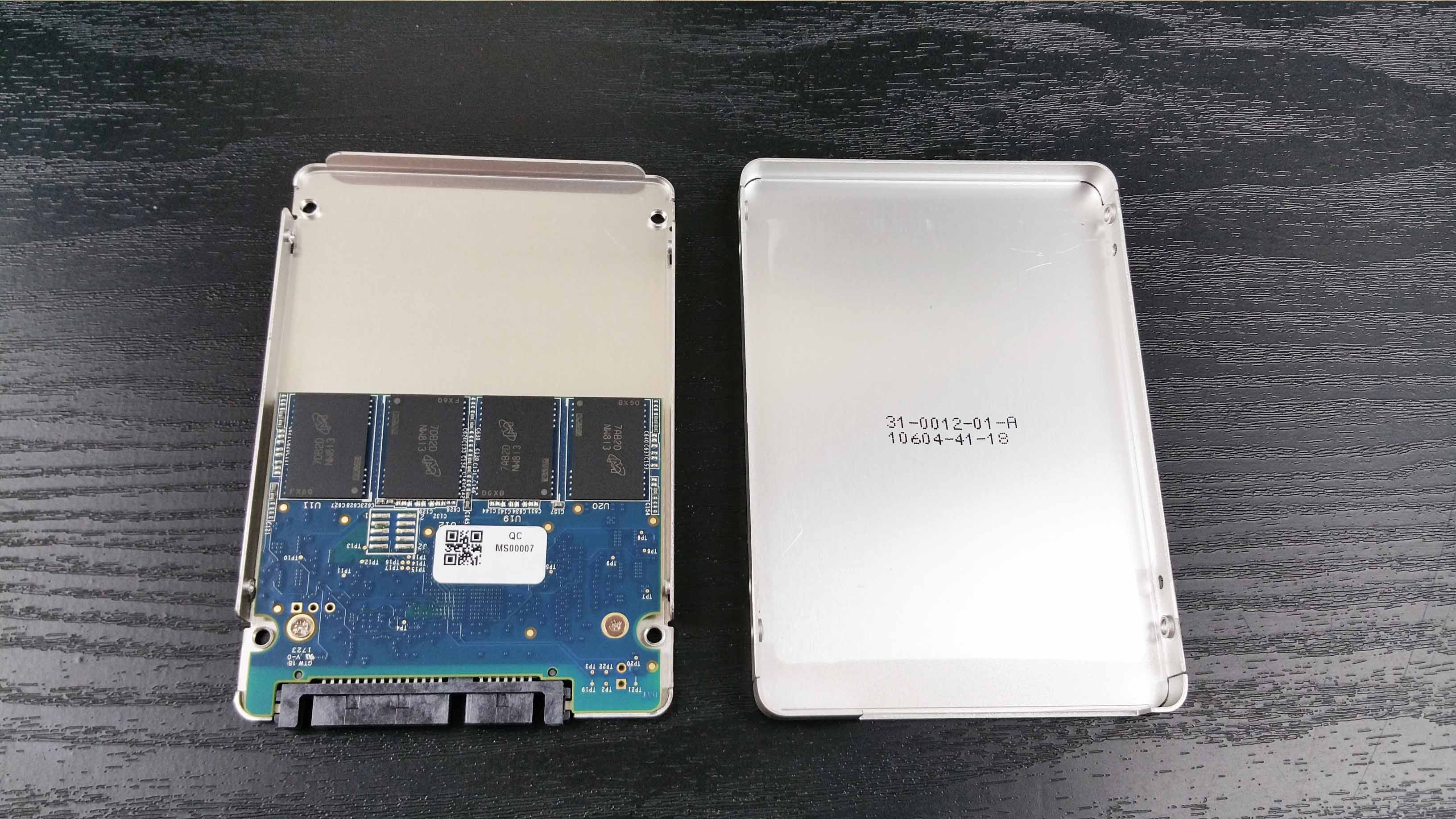 Removing two more screws, this is the other side with a thermal pad present. 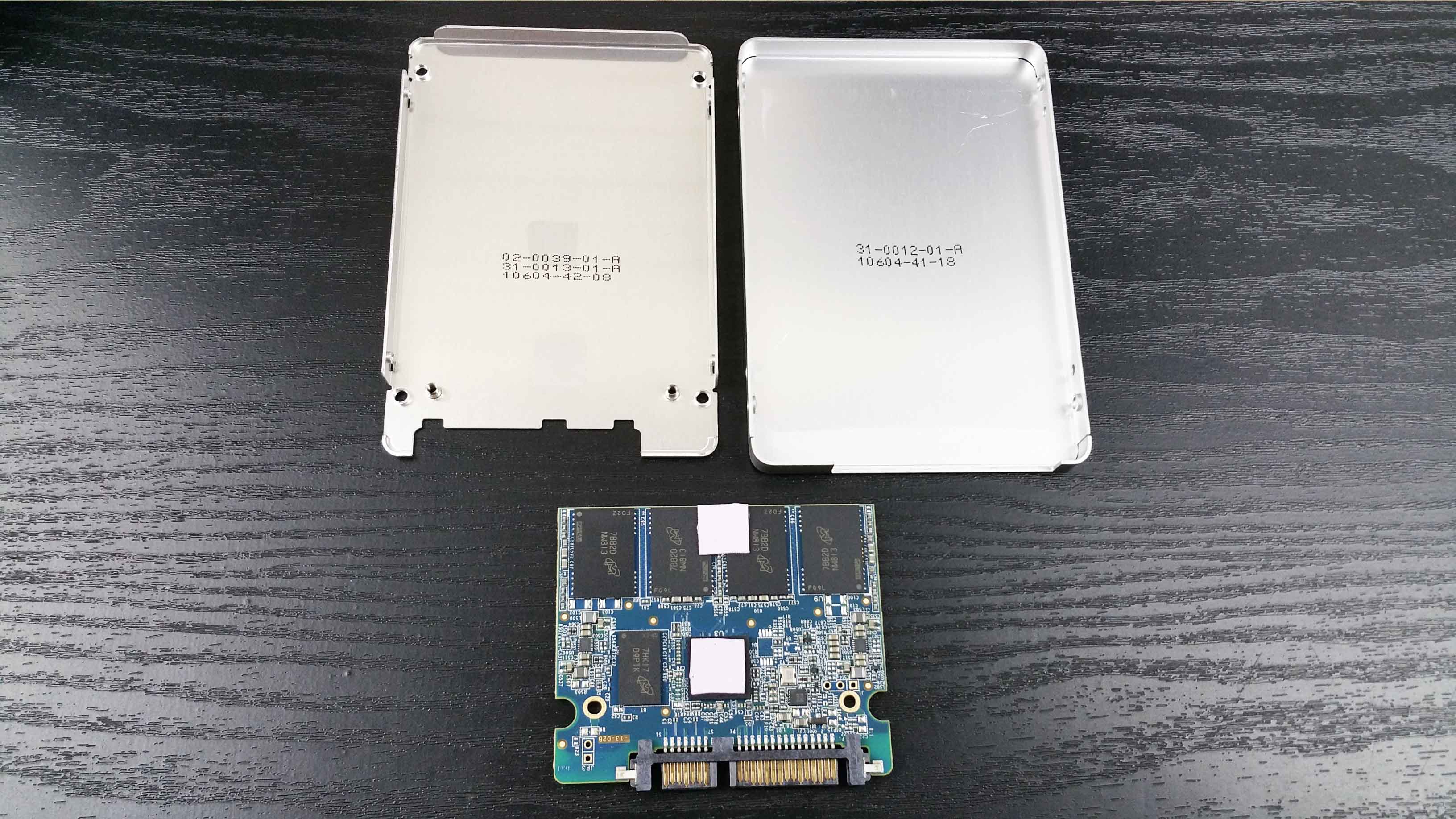 So zooming in, the left chip bearing 7HK17 is the DRAM cache of 256MB. The 480 GB model has double that. And underneath the pad that is the Silicon Motion SM2258 4-channel controller SLC Caching algorithms. 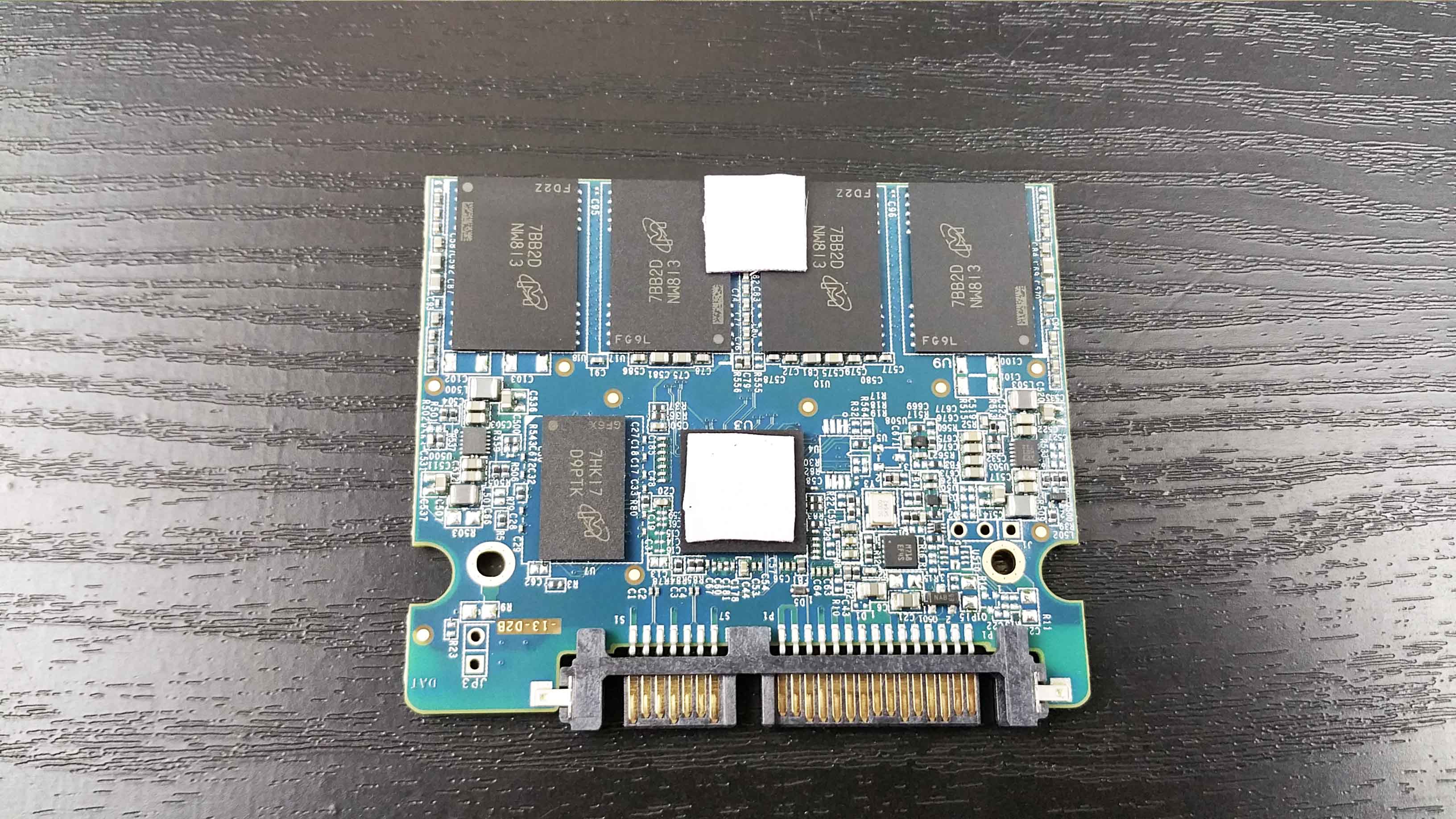 Then these are the 3D MLC NAND cells Gen 1 from Micron. 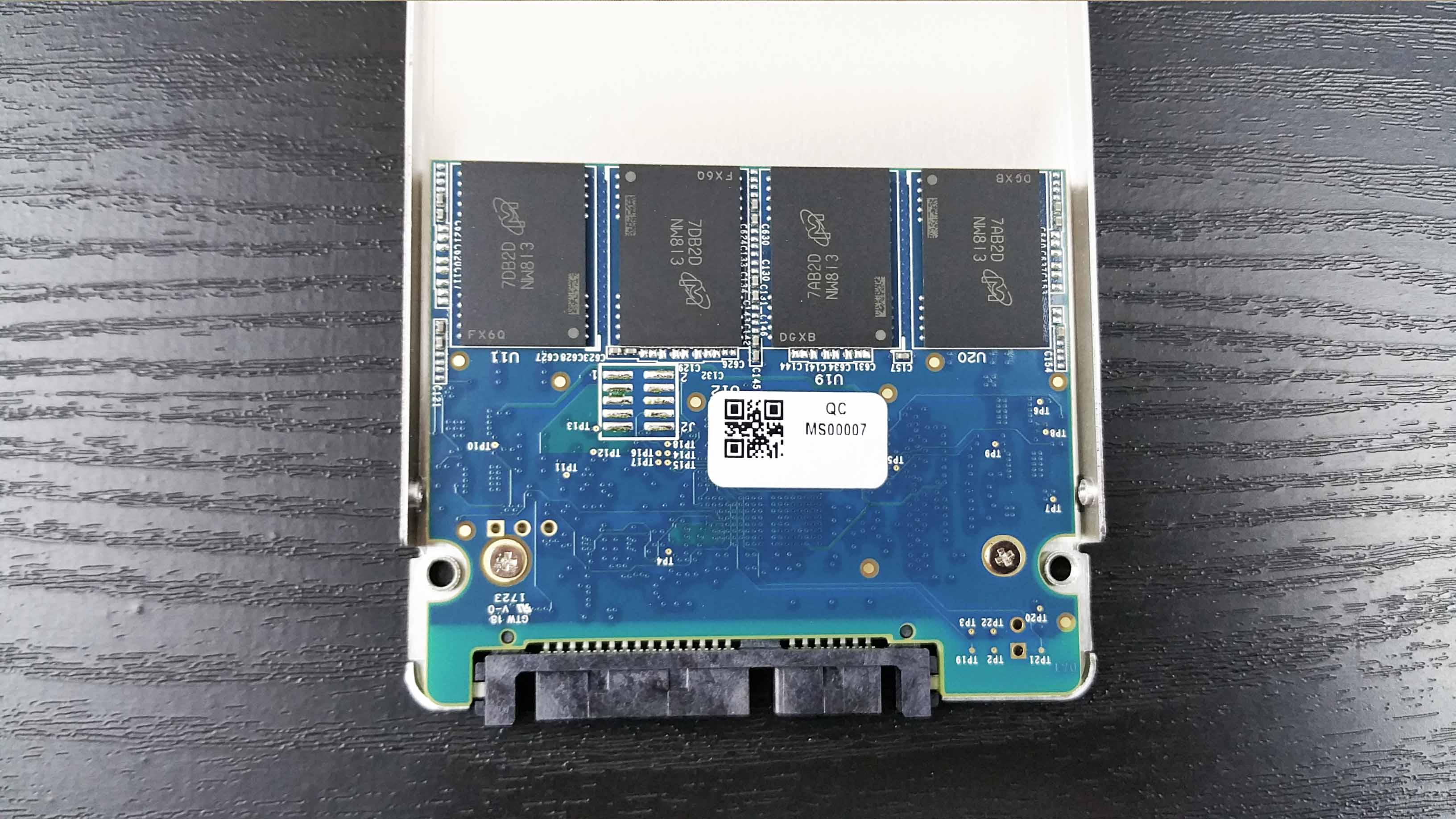 And on a final note, don’t forget to have a look at their proprietary SSD tool which has multiple benefits like:

Right, let’s test this puppy out. 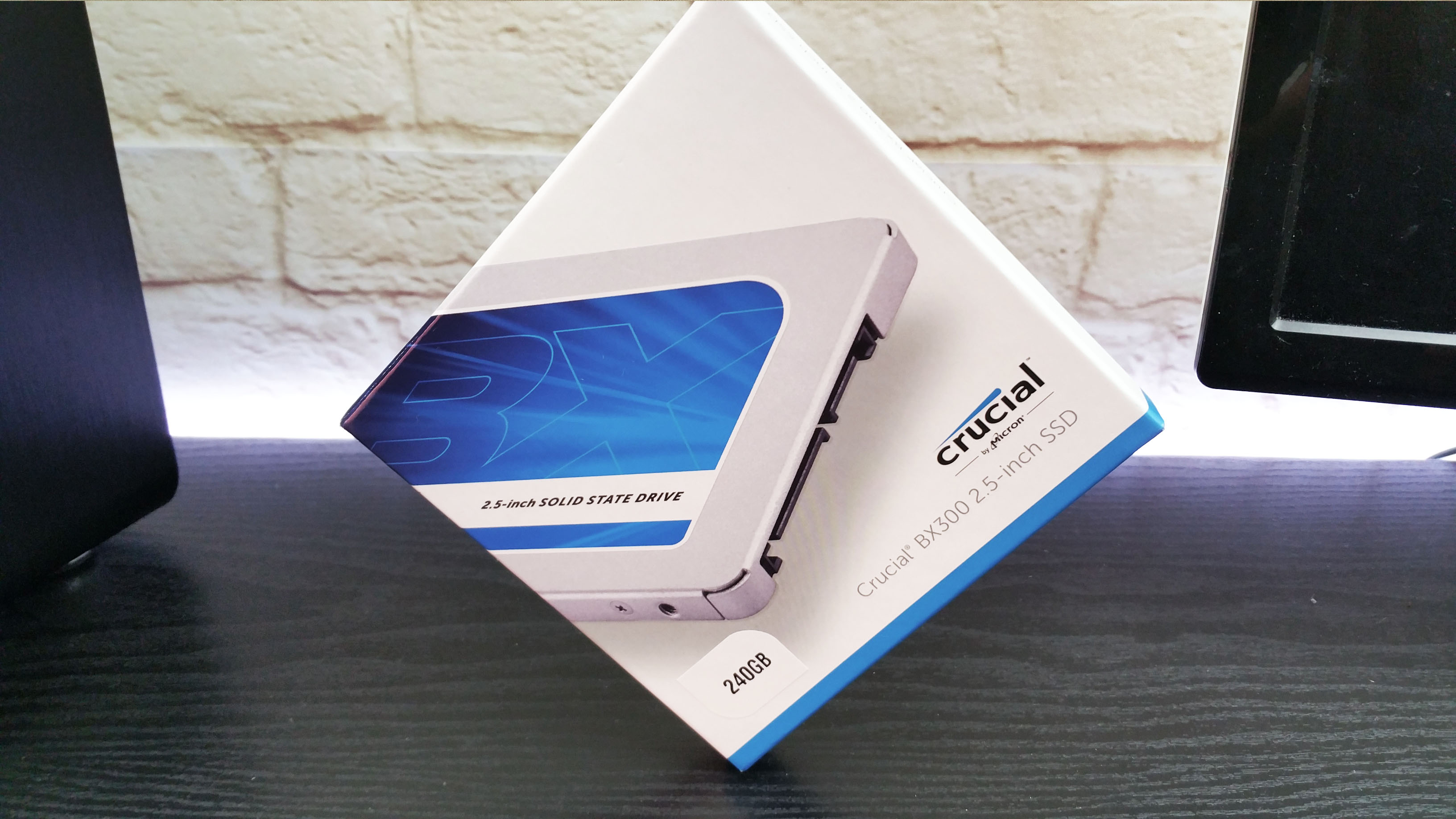 – Synthetic and real life tests.
– All test subjects with identical content.
– All SSDs were secure-erased before our test suite
– Steps have been taken to ensure that the CPU’s power-saving features don’t interfere with any of our results. All of the CPU’s low-power states have been disabled.
– In order to minimize random variation, each of the real-life performance tests is run a few times with reboots in-between tests to minimize the impact of disk cache.

It’s really easy to install, just secure the SSD into your case, then connect the SATA 3.0 cable and the SATA power plug. 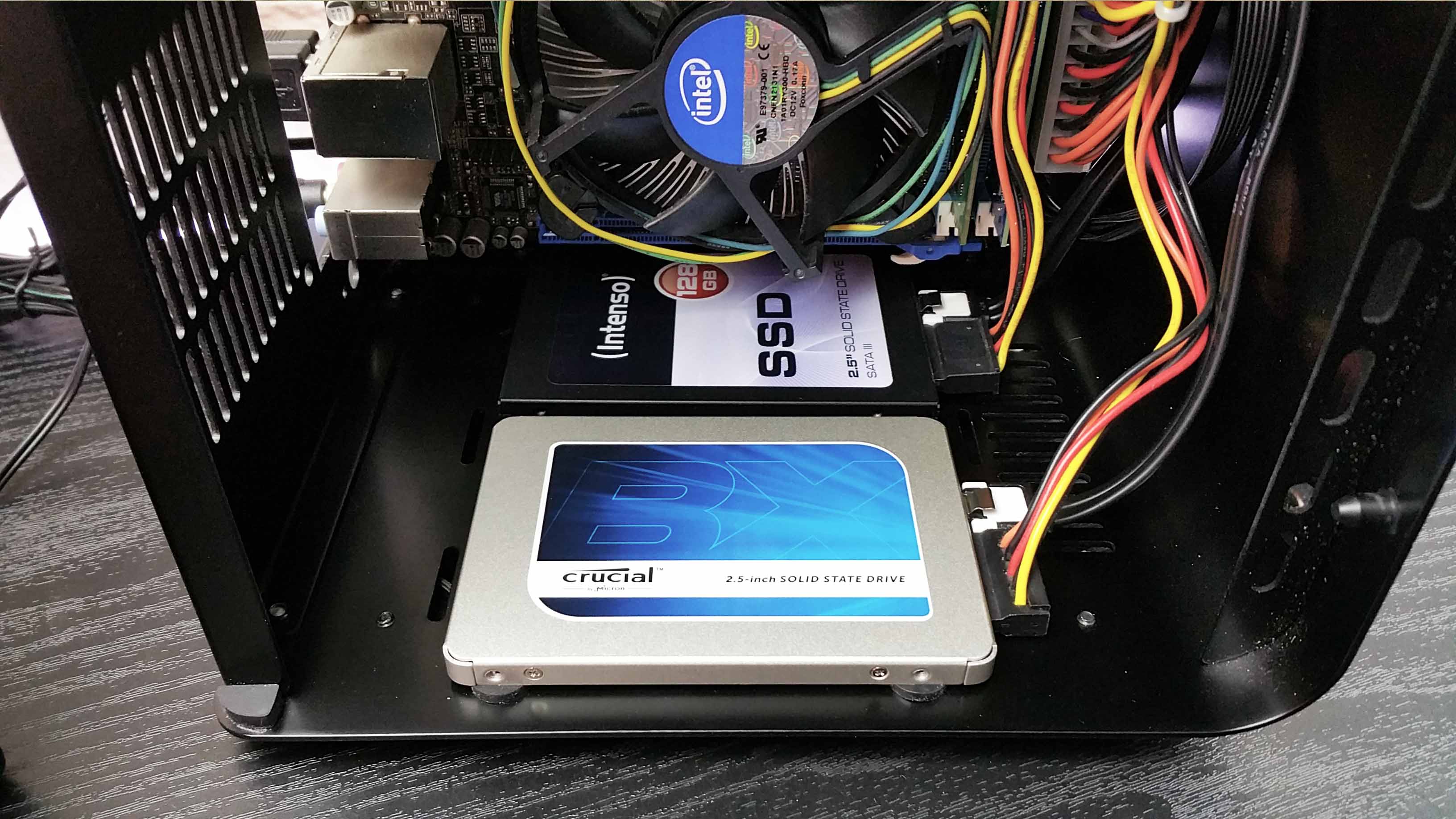 Before we get into the testing, we took a look at the Acronis True Image HD migration software which is included with every Crucial SSD.

First step is to download it from www.crucial.com/acronis. Start the installation.

(For the rest of the tutorial we already covered it here, when we reviewed the MX300 series)

First, we start with HD Tune Pro – is a hard disk / SSD utility with many functions. It can be used to measure the drive’s performance, scan for errors, check the health status (S.M.A.R.T.), securely erase all data and much more. 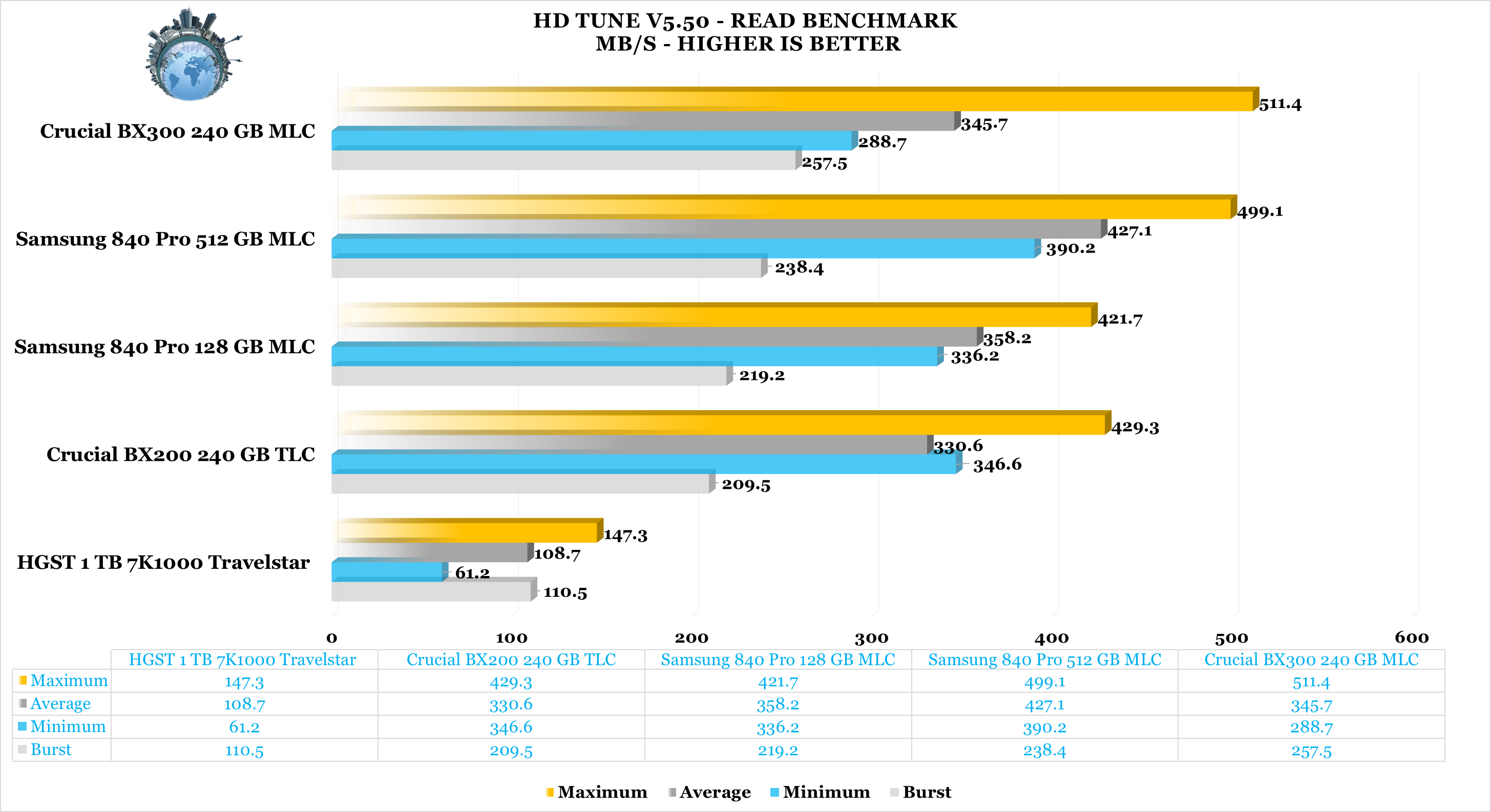 Moving to the next utility – Crystal Disk Mark – CrystalDiskMark is designed to quickly test the performance of your hard drives. Currently, the program allows to measure sequential and random read/write speeds.

As with the description, we will test the write and read capability of each drive. 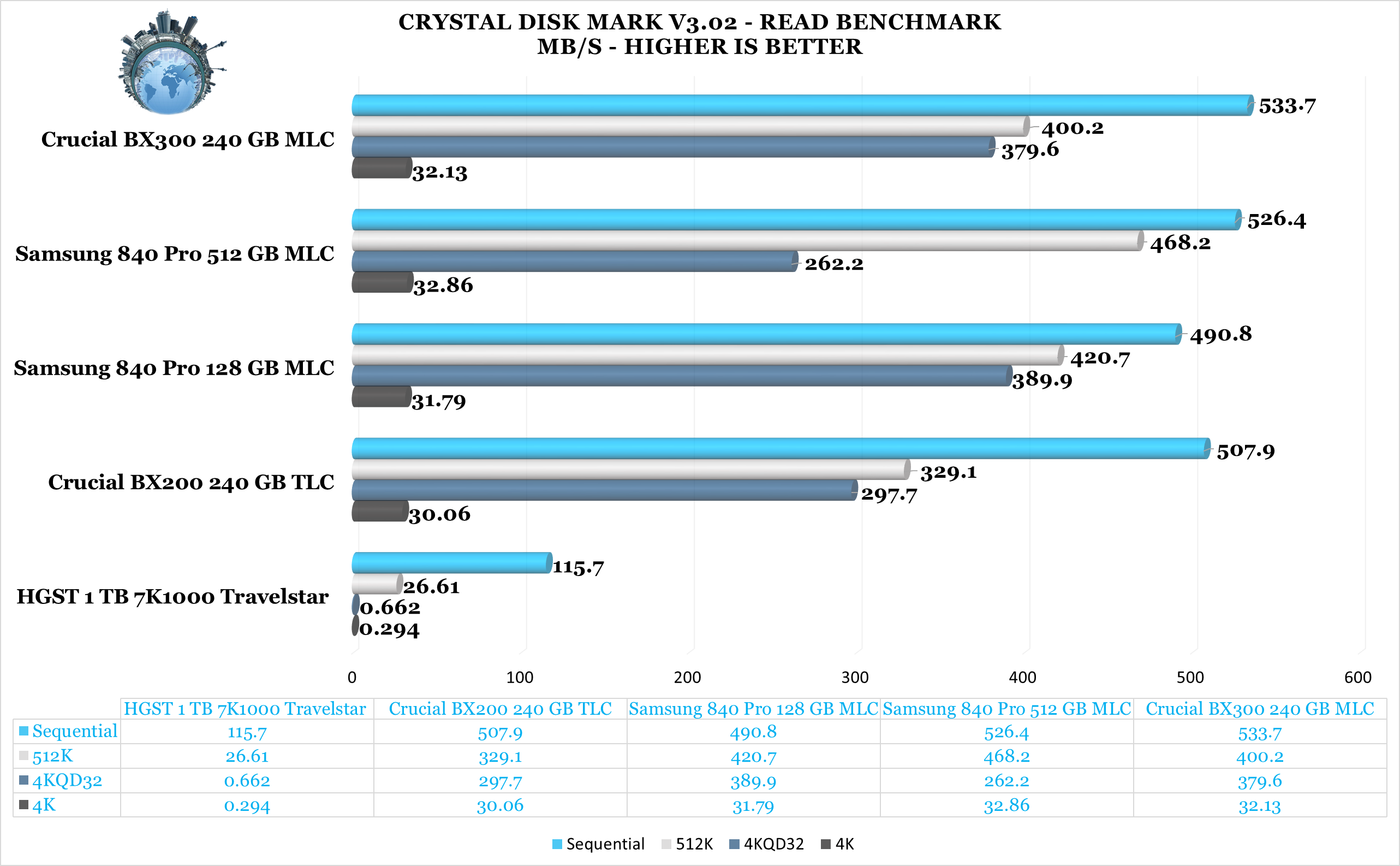 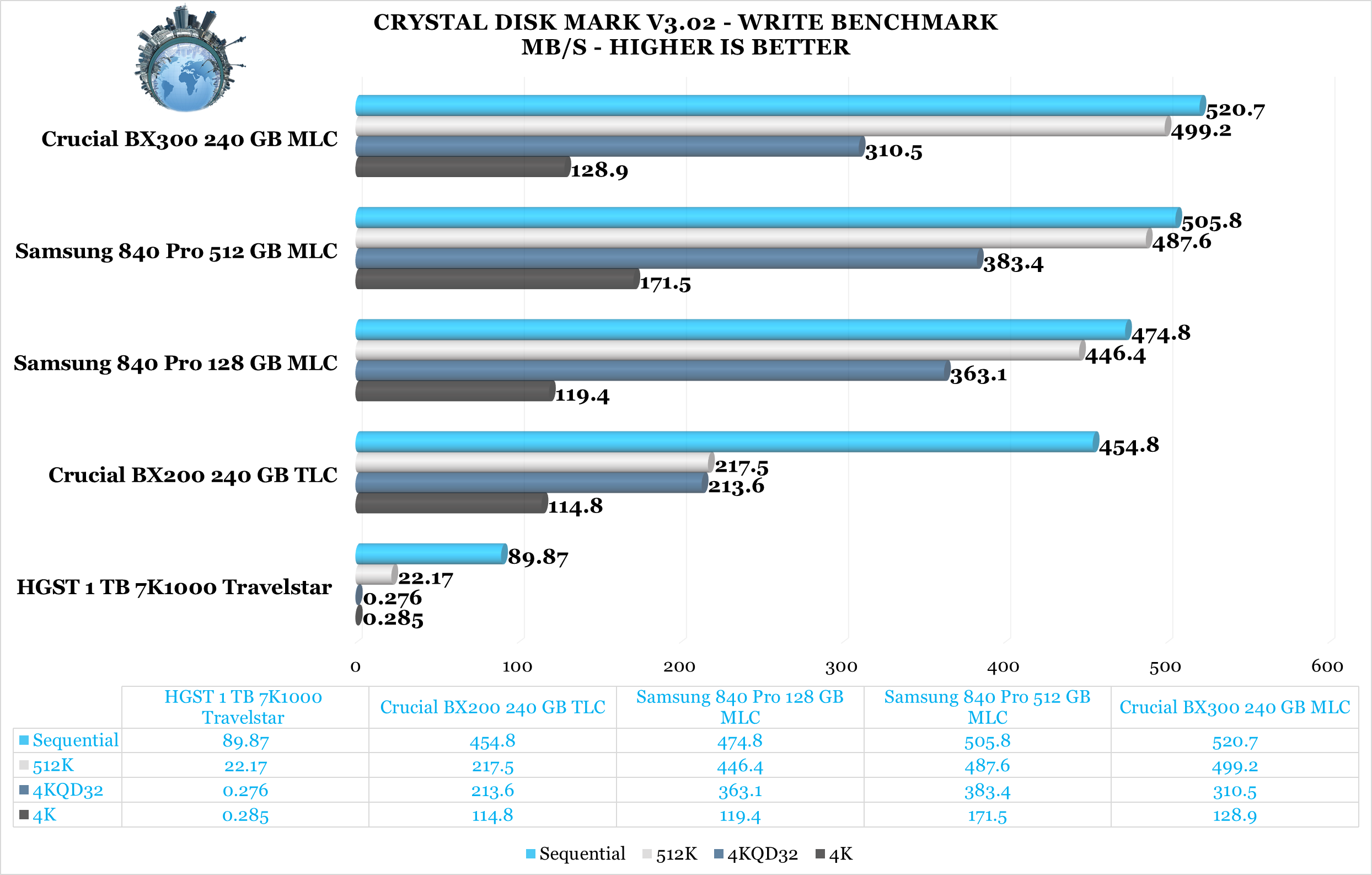 And to finish testing, a real life big file transfer of data specifically to test the cache; what we were talking about in the beginning.
We took a random folder with over 25 GB of mixed data (1 big MKV movie file and then random data) and copied it on the same location, so we can surpass the built in cache (8GB) and see if there are any big performance drops. 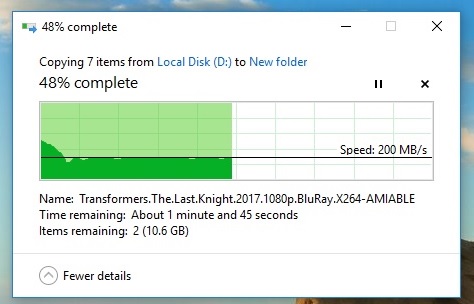 Things got quite interesting. In the synthetics, the new BX300 managed to surpass the previous Samsung 840 Pro generation given its great in house new cell design and firmware. I mean if we had the new 850 Pro on hand we have no doubt it will be 99% of its performance, as long that you don’t go overboard and do 30 GB at a time. Even so, as our copy and transfer test showed, a worst case scenario, when the cache fills up, it will only be a “bad” 200-250 MB/s which is still faster than any HDD and TLC lower spec SSDs.

Crucial did a bold move with the BX300 series to offer them with the new (3D) V-NAND MLC cells paired with an SLC cache. All of these at the price of Samsung’s best selling 850 EVO series (which are TLC cells). But they can’t match the warranty and endurance rating of the Koreans but we think Crucial is either being to modest or just want to play it safe. Maybe we will see bigger capacity models of this excellent new series and with those, higher ratings and warranty. Overall, the BX300 240 GB variant performed extremely well in mixed workloads and synthetics with just the regular penalty when the cache runs out in big file transfers, but still at almost 300 MB/s sustain speeds, it is still plenty of headroom.

Many thanks for Crucial for supplying us this test sample !