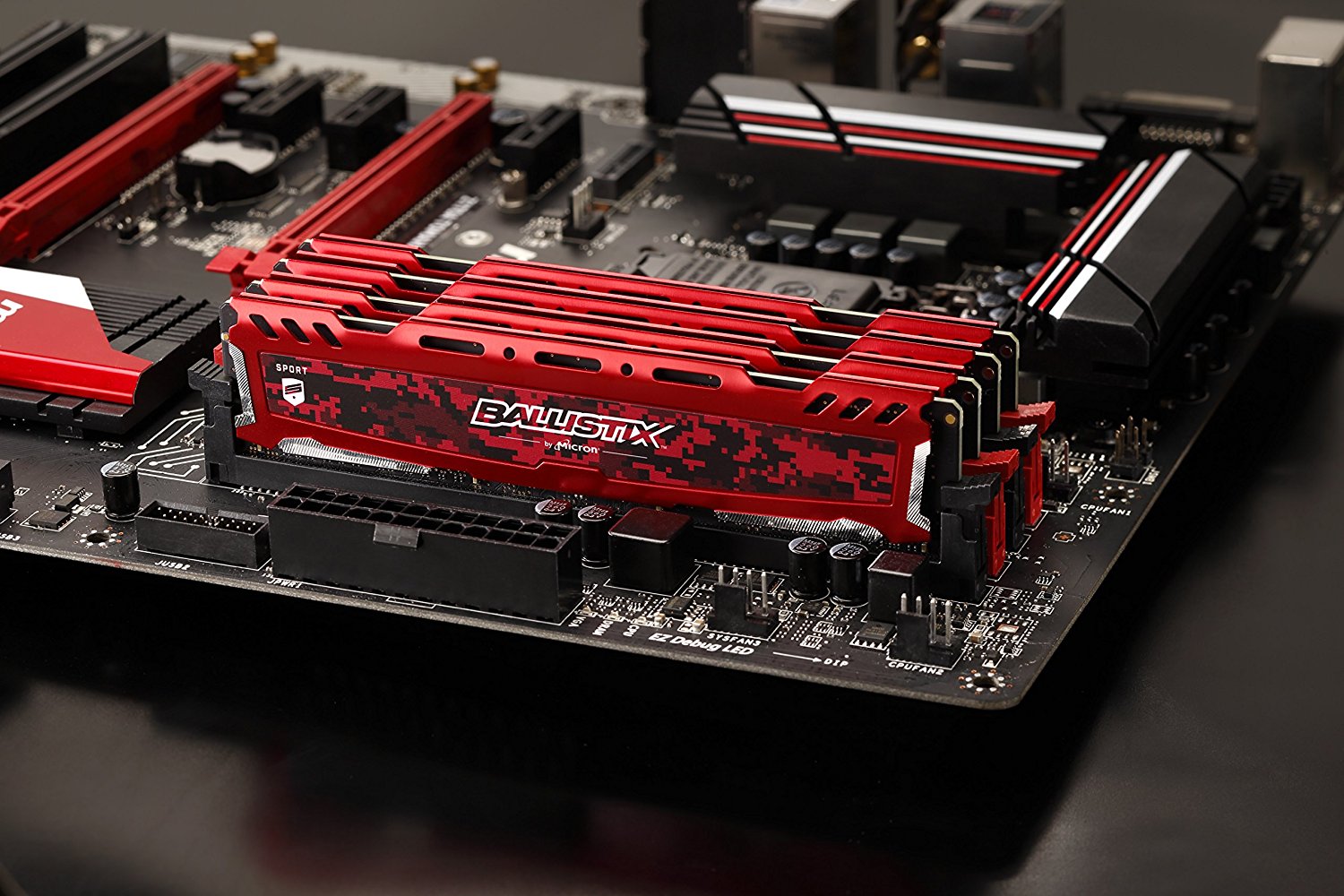 In this crazy period of inflated prices for GPUs (because of the cryptocurrency rave) and RAM, it is difficult to get these two components at a reasonable and fair price to complete your PC build or to upgrade.

But if you have no choice, and want a decent, standard height RAM, look no further than Crucial’s Ballistix Sport series. Thus, today we are having a look at a 16 GB (2x 8 GB) kit in the Red flavour.

Speed. Style. Sport. Get more out of your memory.

Designed for performance enthusiasts, gamers, and anyone who simply wants to get more out of their system, Crucial Ballistix Sport LT DDR4 memory helps you do just that. Give your processor the resources it needs to perform and make your computer faster and more responsive.

Memory is fun when it’s faster, when it’s stylish, and when it helps your system perform at a higher level. Compared to standard Crucial DDR4 memory, that’s exactly what Ballistix Sport is engineered to do. Get faster speeds and run demanding applications with ease. Multitask at will with increased bandwidth. And strike first with better latencies and reduced load times.

Getting more out of your system should be easy — and that’s exactly how we engineered Ballistix Sport memory. Using cutting-edge technology, intuitive module design, Intel® XMP 2.0 profiles and more, we designed Ballistix Sport with the sole intent of creating affordable, easy-to-use performance memory. Installation is a cinch: just plug-and-play, and get ready to win with little to no BIOS configuration.

With a stealth digital camo design and integrated heat spreader, Ballistix Sport LT is designed to be your memory lieutenant. Keep your system cool and collected while mowing down the opposition — whether that’s a challenging spreadsheet or an opponent you’ve just reduced to a bloody pulp.

Micron® quality—a higher level of reliability.
As a brand of Micron, one of the largest memory manufacturers in the world, Ballistix memory is built to last and delivers a higher level of performance than standard memory. For more than 35 years, we’ve engineered old-school DDR memory all the way to Ballistix Sport DDR4, which empowers you to seize an affordable performance edge. Backed by a limited lifetime warranty and rigorously tested to some of the most demanding standards in the industry, Ballistix Sport LT DDR4 memory has been thoroughly proven and is ready to make an immediate impact in your system.

Crucial uses mostly a transparent plastic packaging so you can see the products inside. In a diagonal we have the DDR4 series they represent: Ballistix Sport. 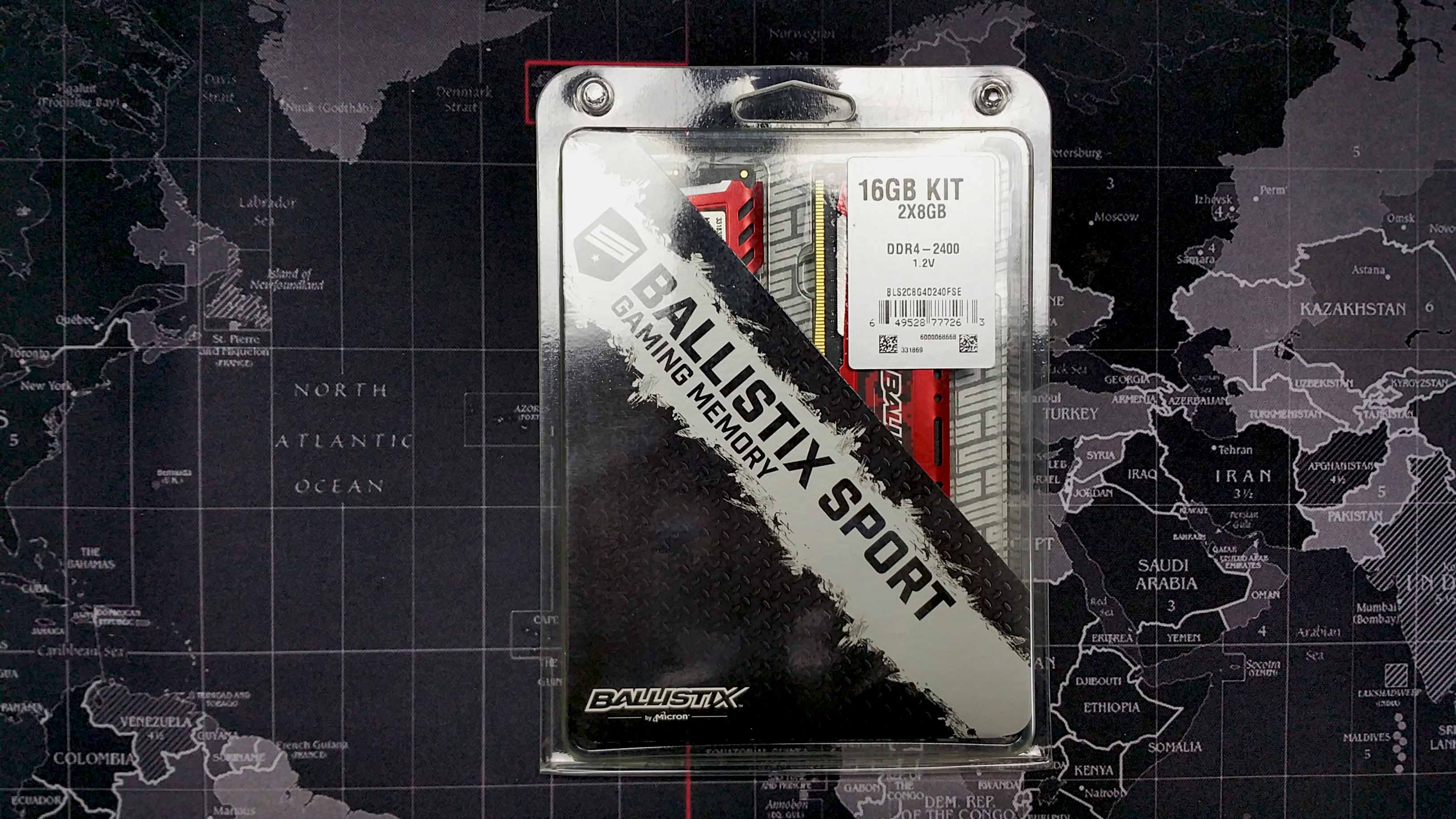 Not much happening on the back, just a minimal product presentation. 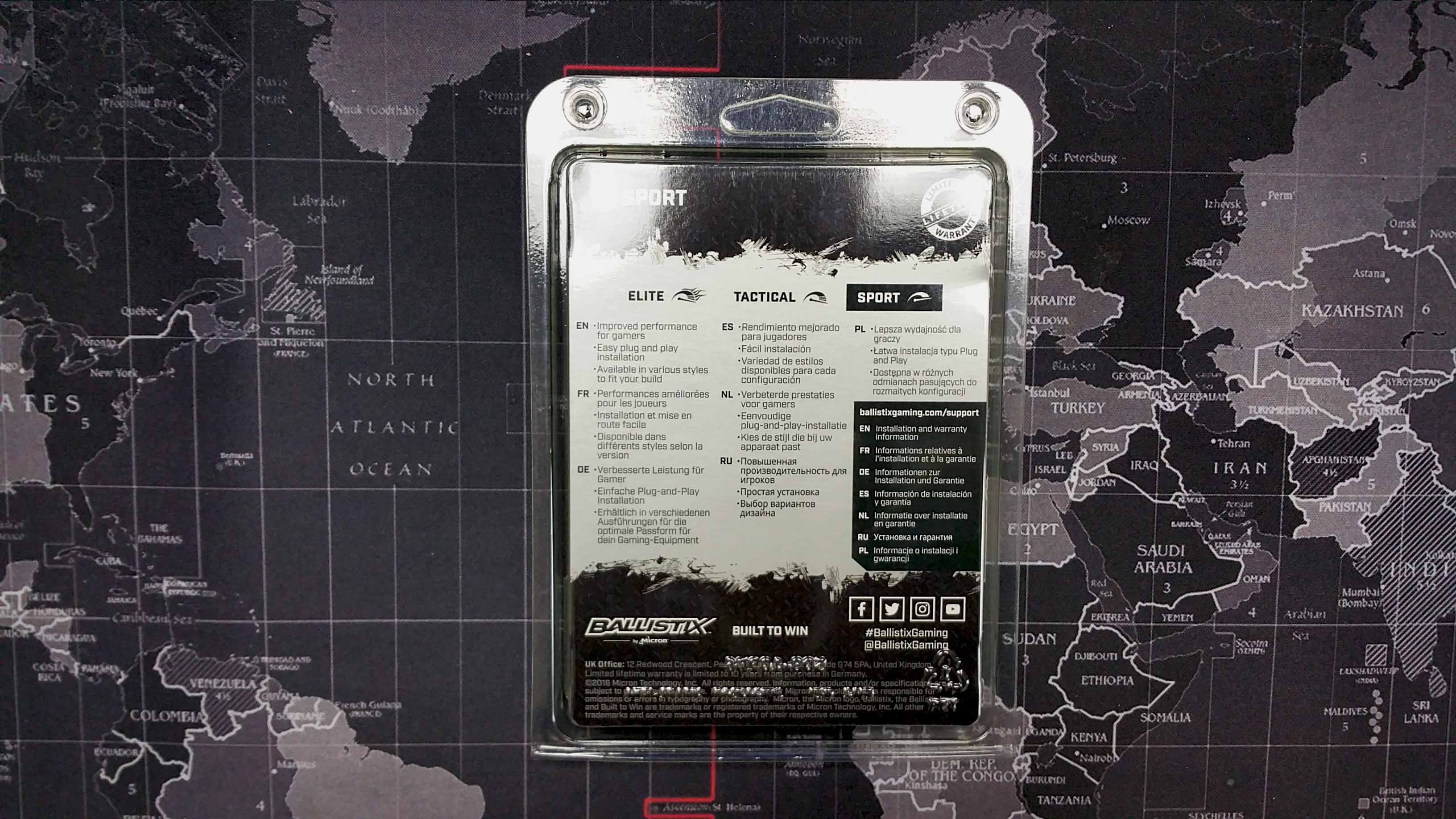 Uuuuu… just look at that sexy sports car red that shines so good ! 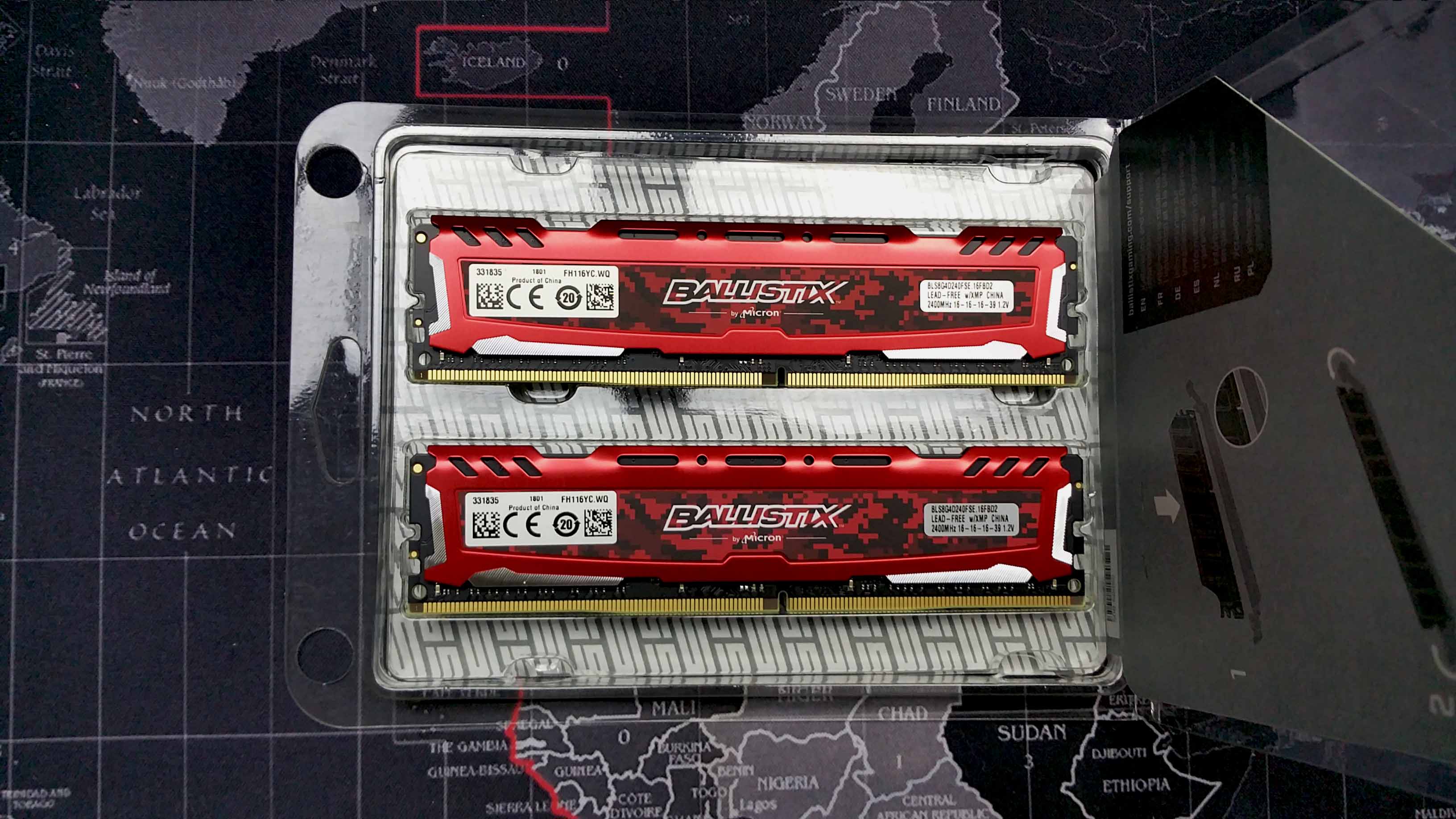 All metal heat-spreaders of course. 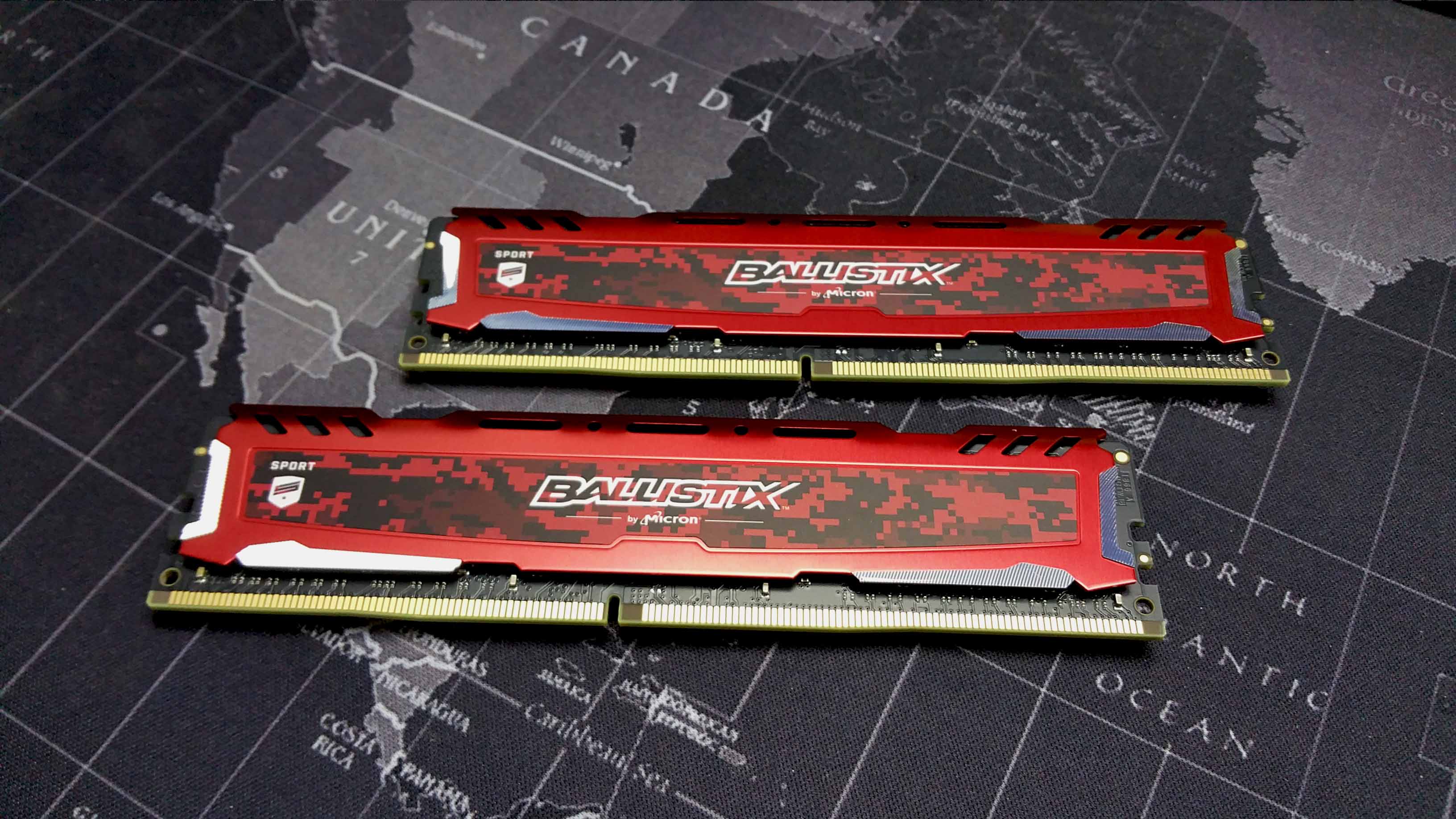 Zooming in, this tag shows us all the specs and info that we need to know about this kit. 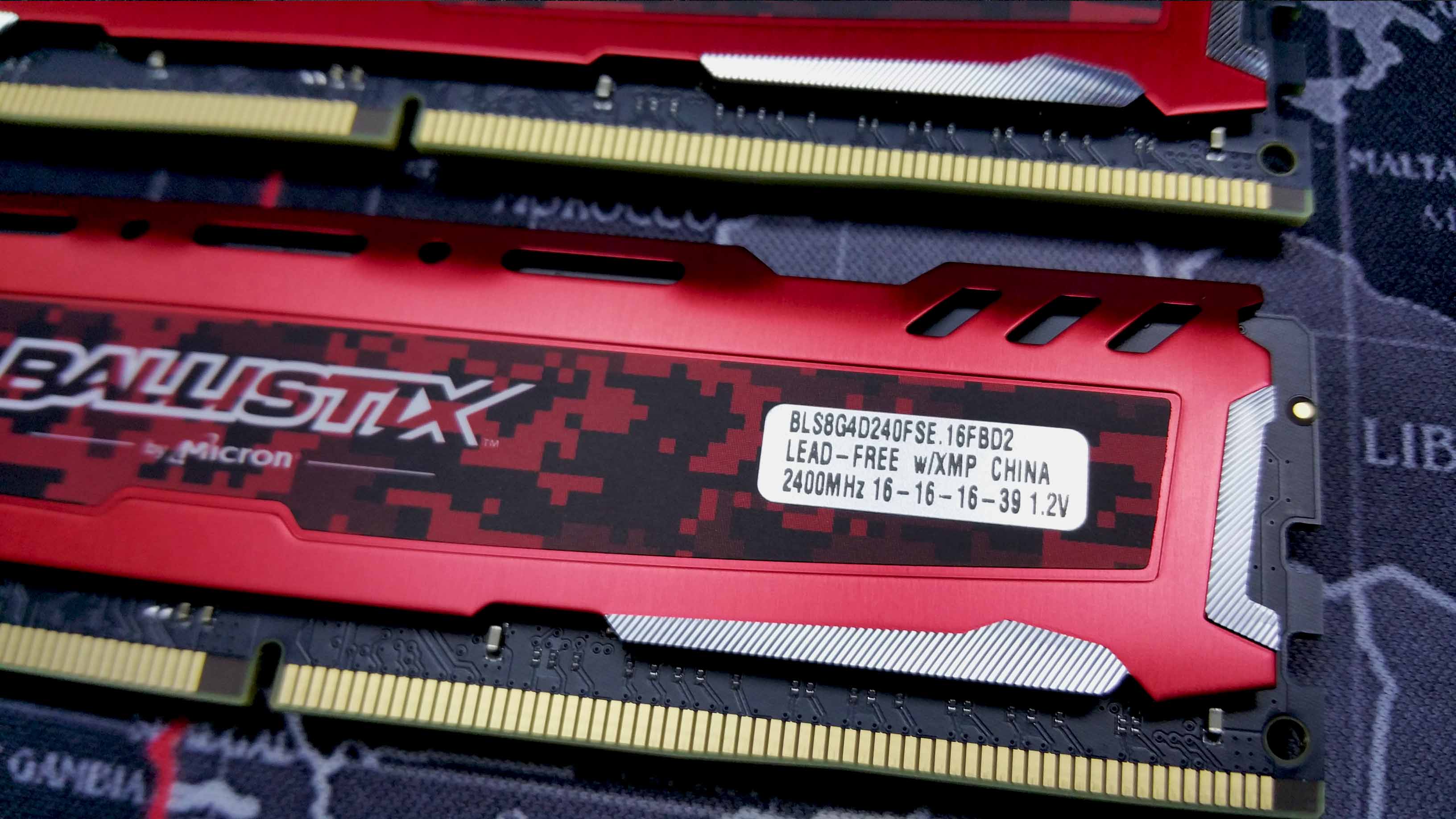 Time for the next chapter.

We will employ a run of synthetic benchmarks at the boot speed (2133 mhz) then at their XMP 2.0 value (2400 Mhz); followed by some gaming sessions to see how they will perform there as well. 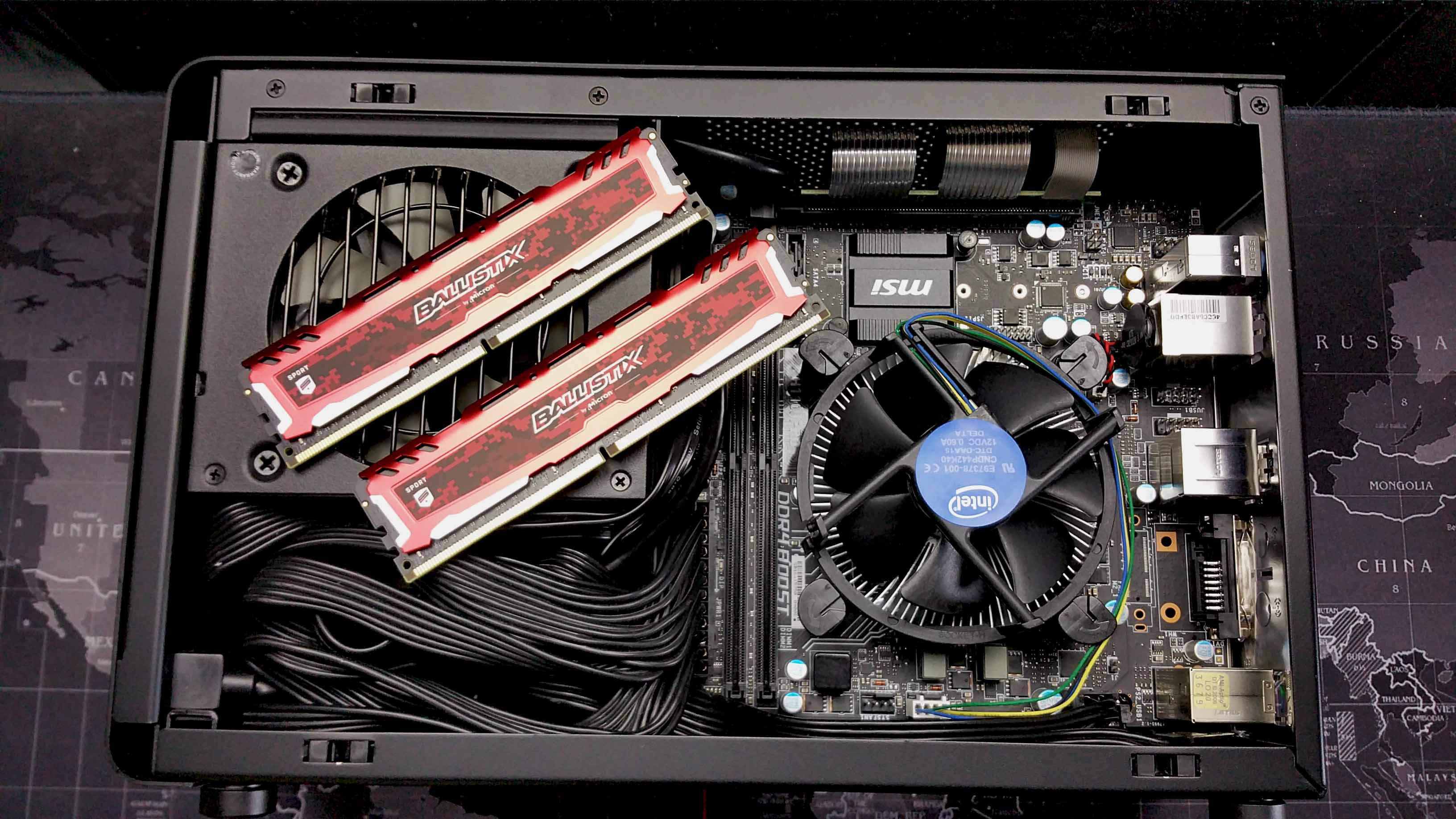 Installation is really easy, just make sure you align the notches to the slots. 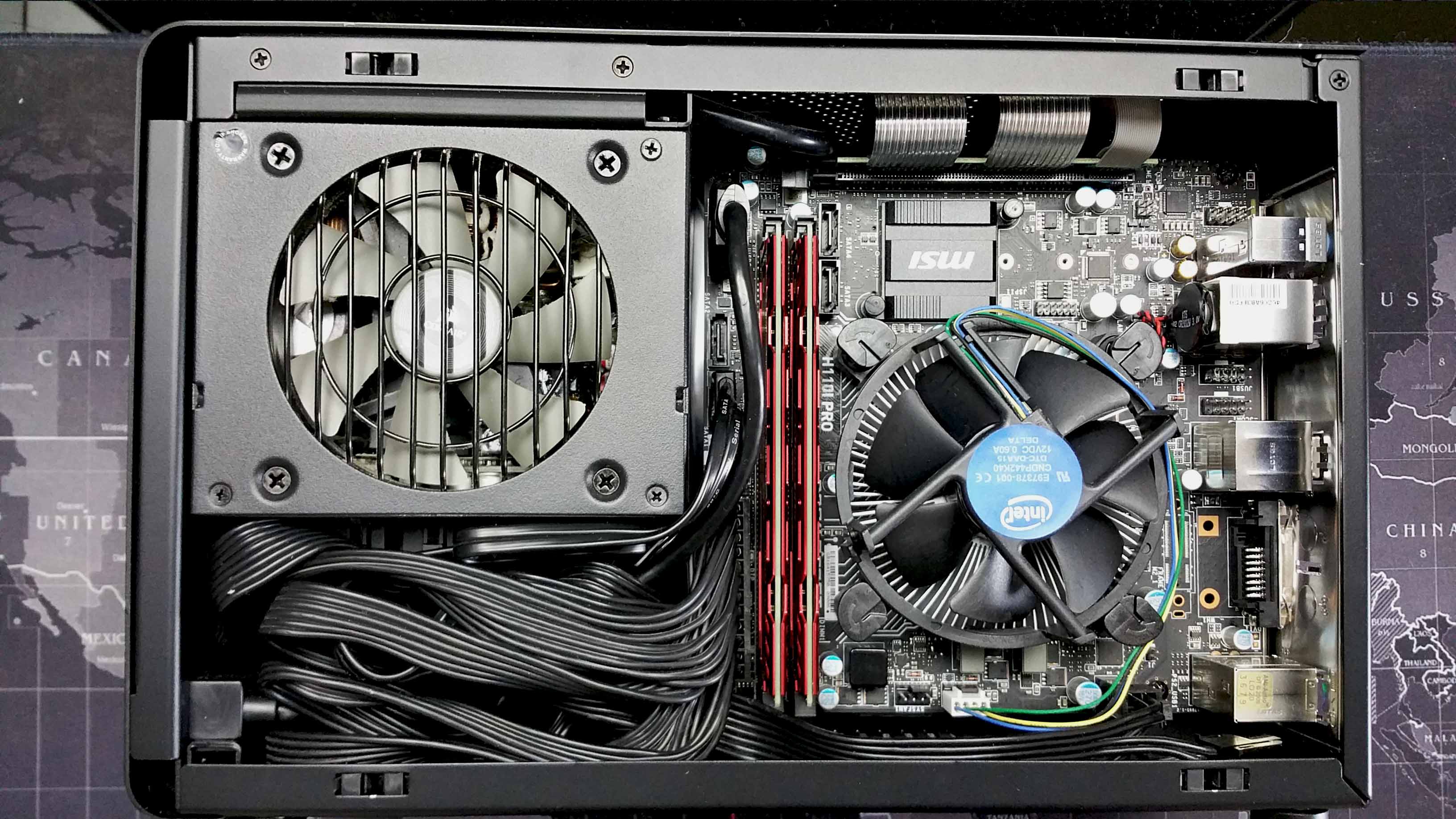 Enter the BIOS to double check that both modules are recognized. 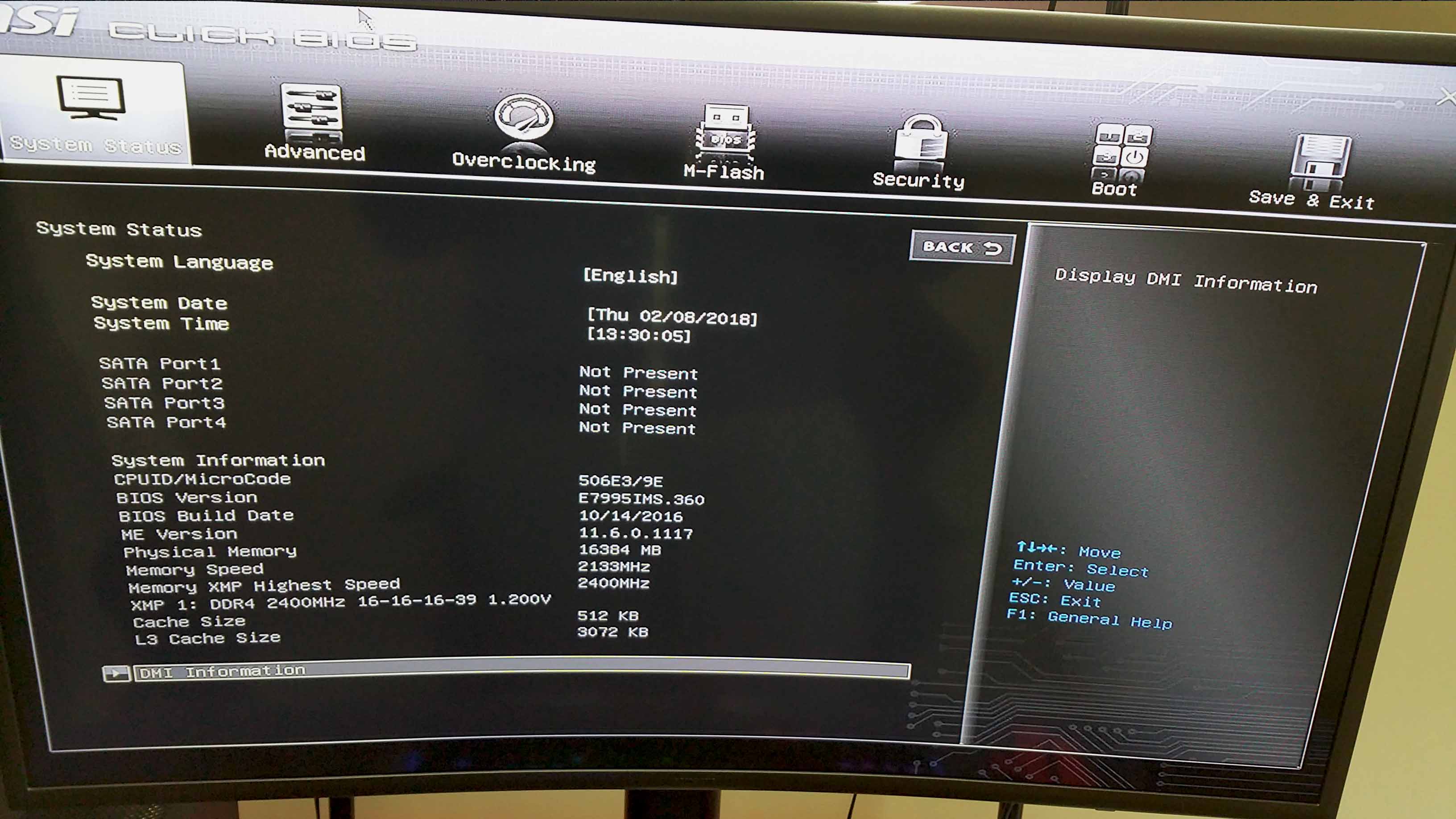 Then go to the memory options to enable the XMP profile – what we will do later on in our 2nd round of tests. Even though officially H110 chipset doesn’t support anything higher than 2133 Mhz, it can still OC through the XMP depending on your BIOS and/or when paired to a Kaby Lake CPU. 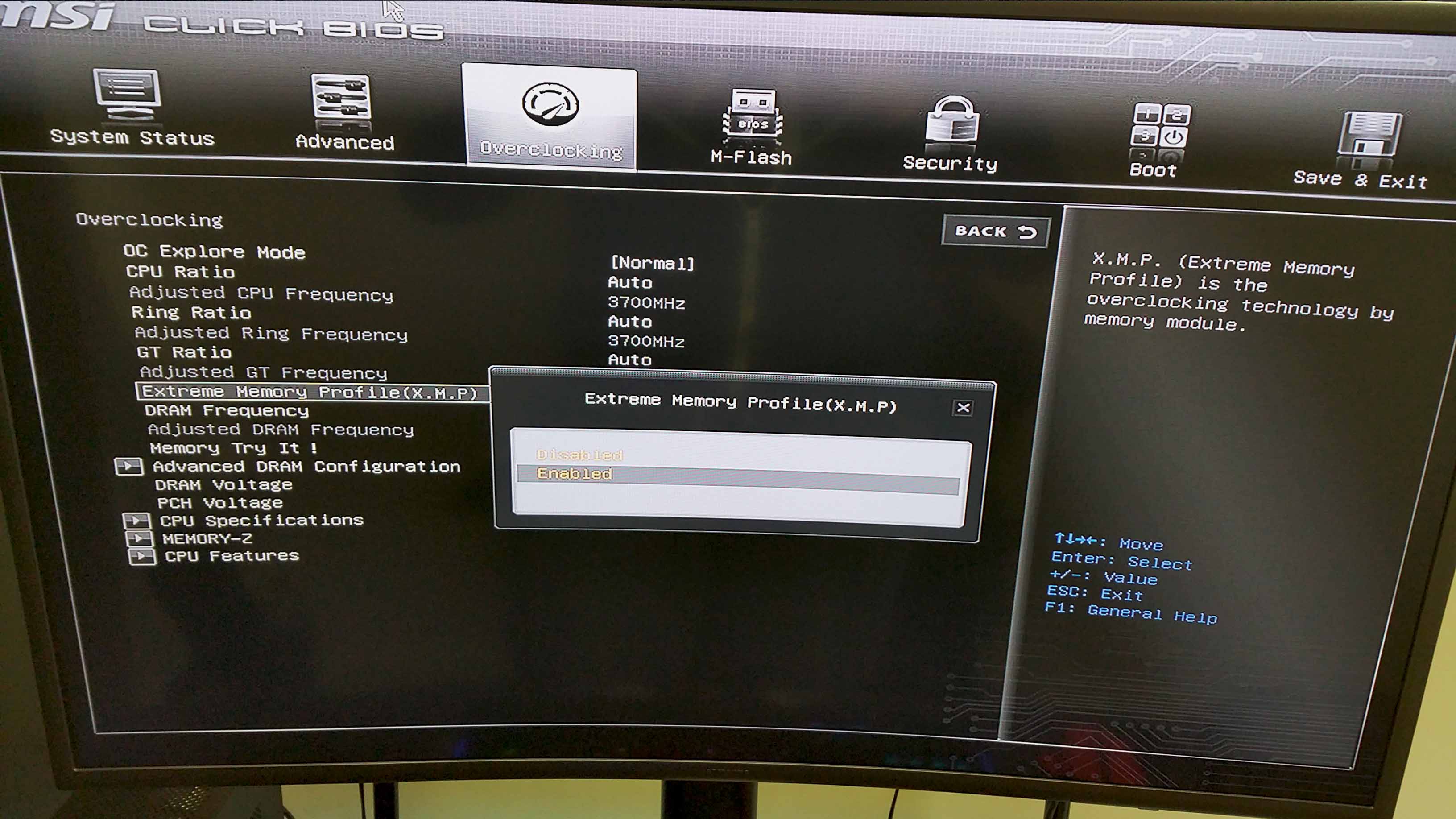 First off, we do the AIDA64 Extreme Cache & Memory benchmark.

Next up is the Cinebench test.

The last synthetic one is the Intel Extreme Tuning Utility.

Now let’s move onto the games.

To point out that Tomb raider is an incredible RAM hungry game. In our tests we had over 13 GB used by the game alone ! 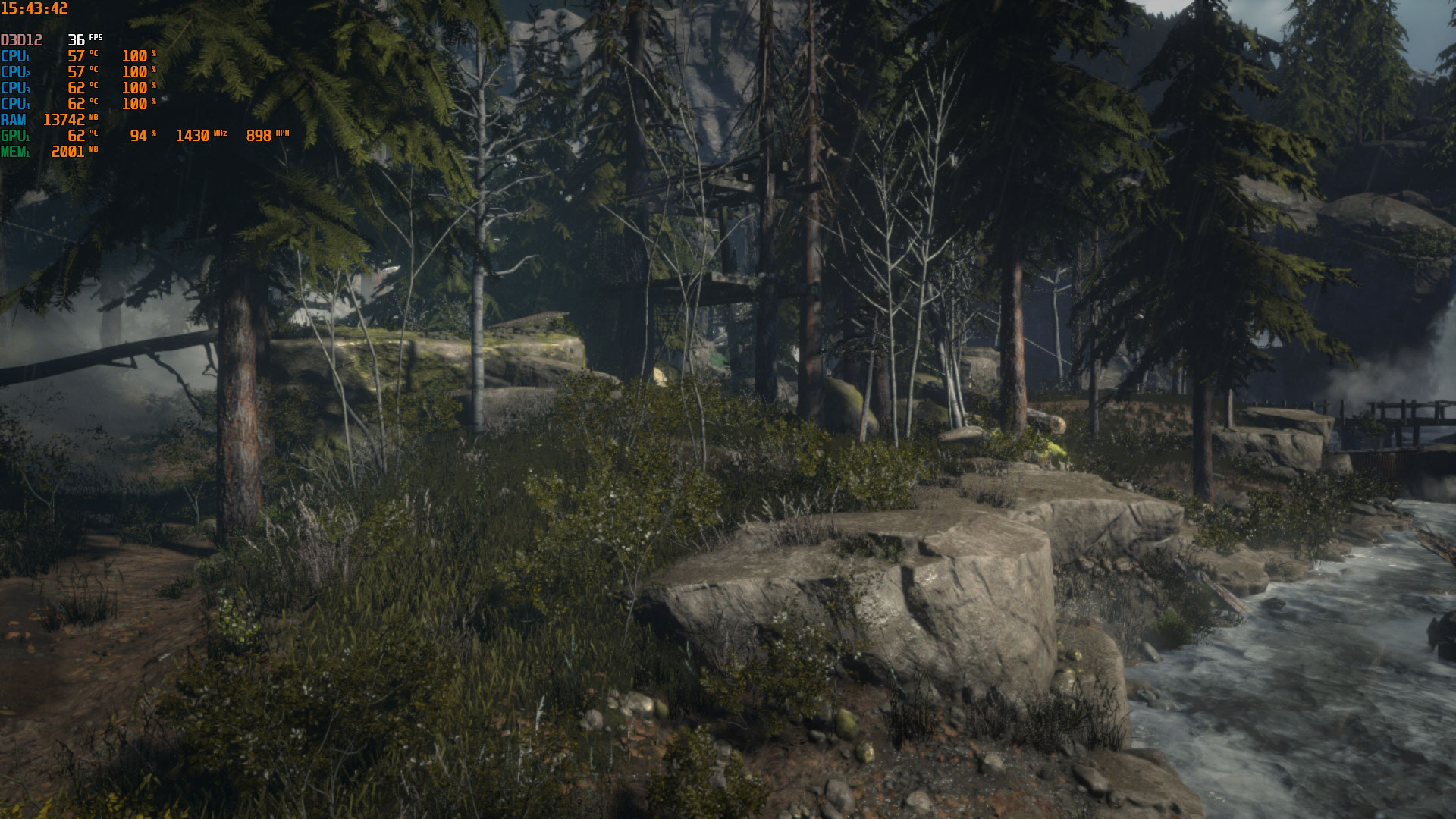 Unfortunately our small form factor build didn’t give us the ability to overclock higher than the XMP profile but the difference in performance we saw from 2133 MHz to the 2400 MHz gave us a good perspective on their performance. Thus in AIDA64 we witnessed an increase of 1.05 % in ‘Read’ bandwidth and +1.12% in ‘Write’ bandwidth.

The same story is repeated in Cinebench, although it is mostly a CPU bound test, it needs RAM as well to fully scale; about +1.04% increase again. Lastly IETU goes to +1.1%. Synthetic tests tell just half of a story.

Then, finally, in the games tested, we saw marginal improvements but overall gains nonetheless. Some games will scale proportionally with MHz increases but that is very dependable on the game and most importantly the resolution.

Crucial is well known in making high quality RAM but also at a good value. Today’s review proves just that. If you are in the market for low profile heat sink design than look no further than the Ballistix Series. Until the global DDRx market gets back to decent prices, we must either wait to buy or bite the bullet and get what we can. So far these are among the best priced 16 GB kits out there that is stylized (aka no ‘ugly’ green PCB) and come from a well established brand.

– Miss an RGB variant and as I am aware they are on their way to the market.
– Expensive, but not Crucial’s fault because this is a global phase right now

Many thanks for Crucial for supplying us this test sample !