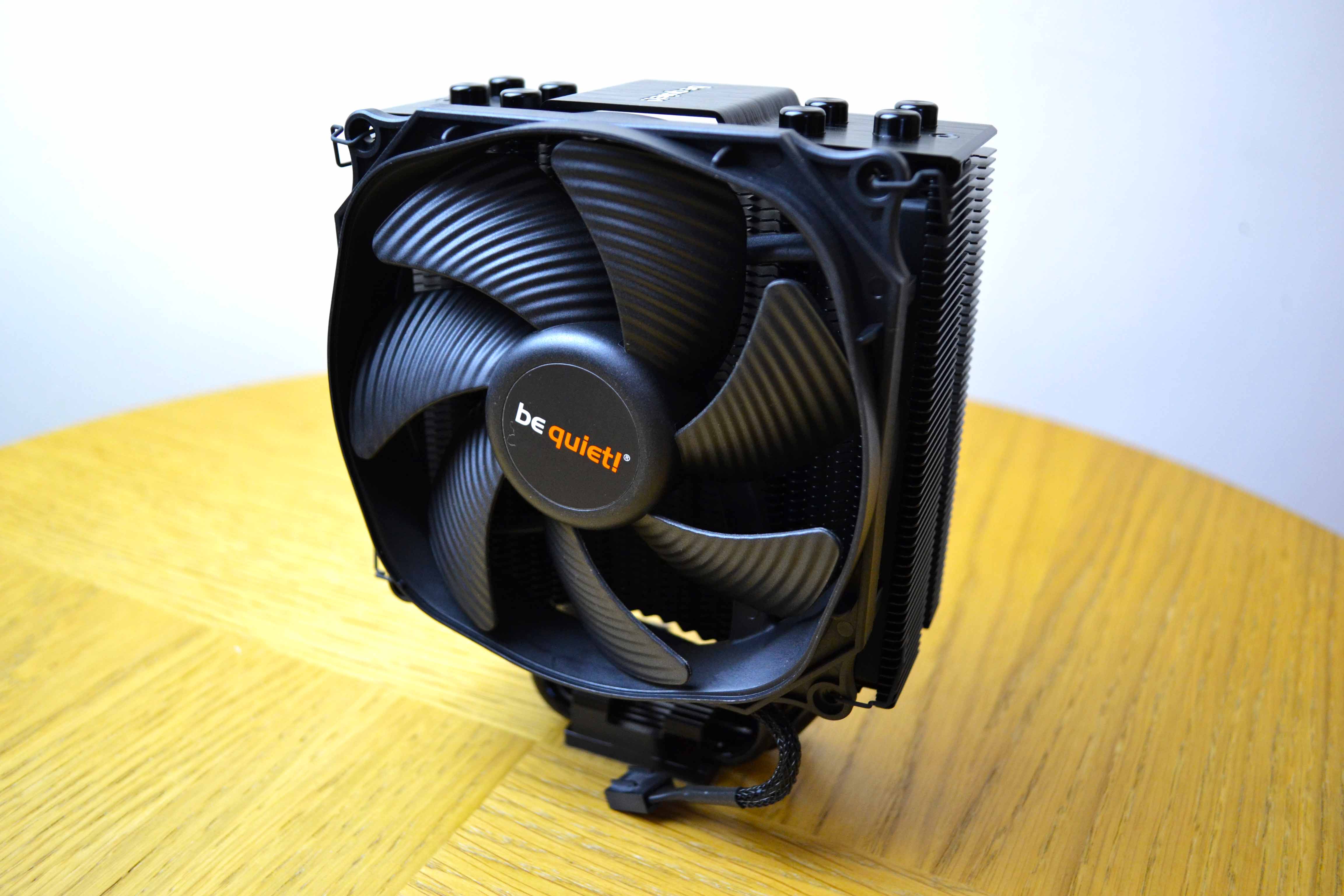 Be Quiet! is one of the best companies out there regarding CPU coolers and cases among their main products. We reviewed plenty of items from them to be confident of this conclusion. The ‘Dark Rock’ series is the top tier in their CPU cooling portfolio and today’s star, the SLIM is theoretically the smallest. On paper it still packs a punch, with its rated 180W TDP, despite only being a single tower of 120 mm.

First about Be Quiet!

Like we mentioned in the intro, the SLIM is the ‘smallest’ in the Dark Rock top tier line up and at $64.99 seams a bit much when compared to something very similar like in our last review with the Cooler Master 212 RGB for just just $39. 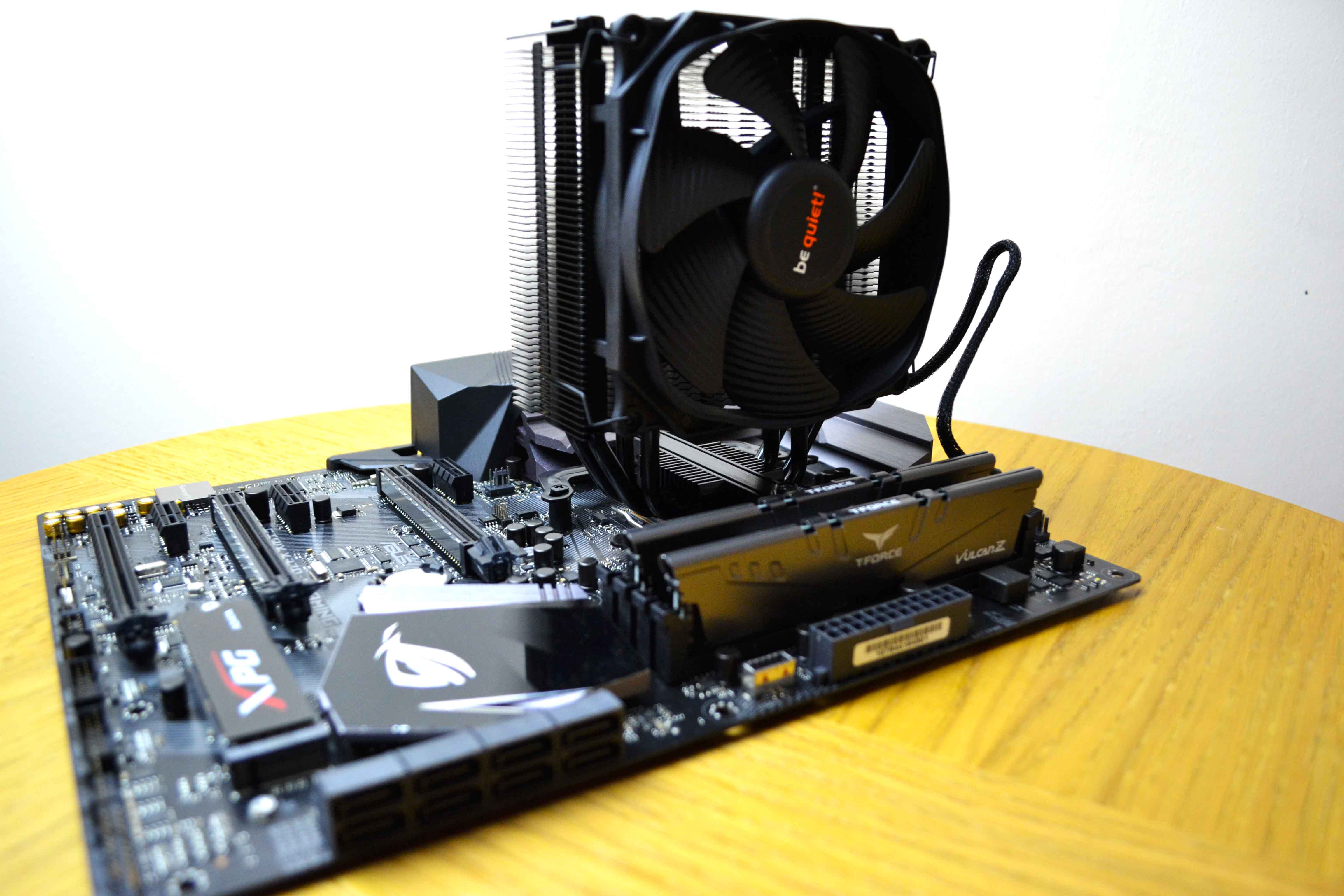 EXCEPTIONALLY HIGH COOLING POWER
Achieving an incredible performance-to-noise ratio – Dark Rock Slim provides an impressive rating of 180W TDP and achieves low temperatures even during periods of peak CPU performance. It is also possible to add another 120mm fan for even better cooling.

Then the main specs are as follows. 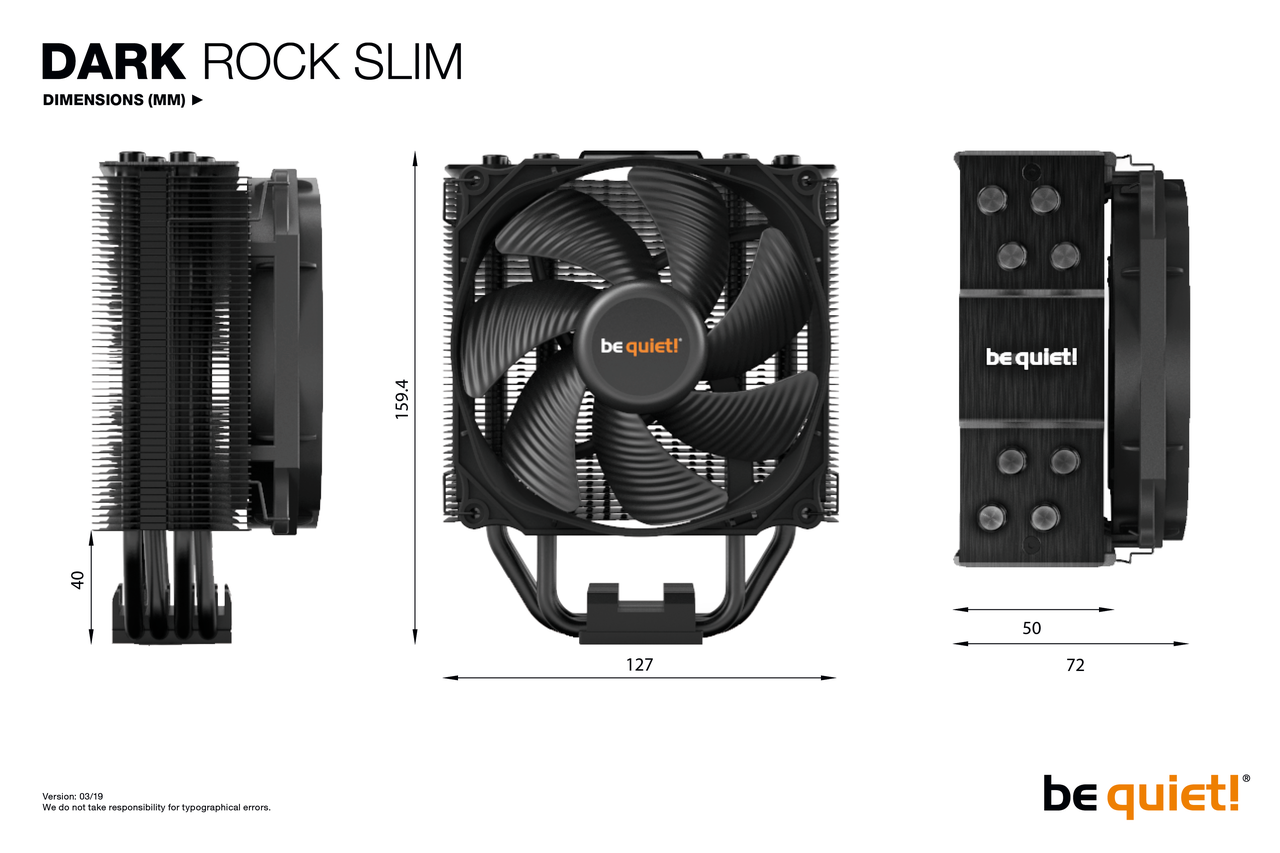 Very easy to recognize that this is a Be Quiet! product. We have a real visual depiction of the product on the front while the company logo is on the upper right corner. 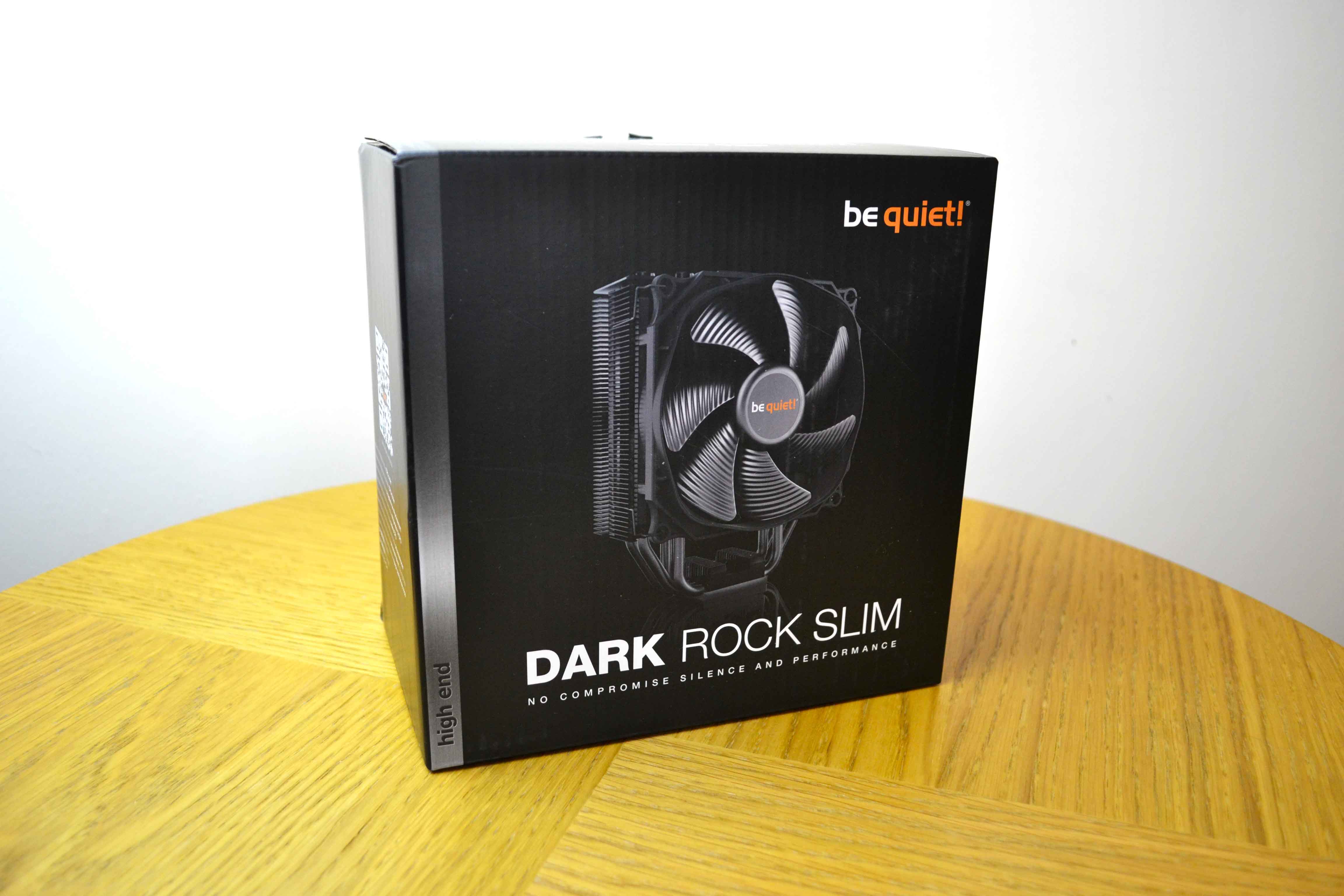 The back informs us what type of fan it uses which is a top tier one, with a fluid dynamic bearing rotor and the overall TDP of the Dark Rock SLIM. 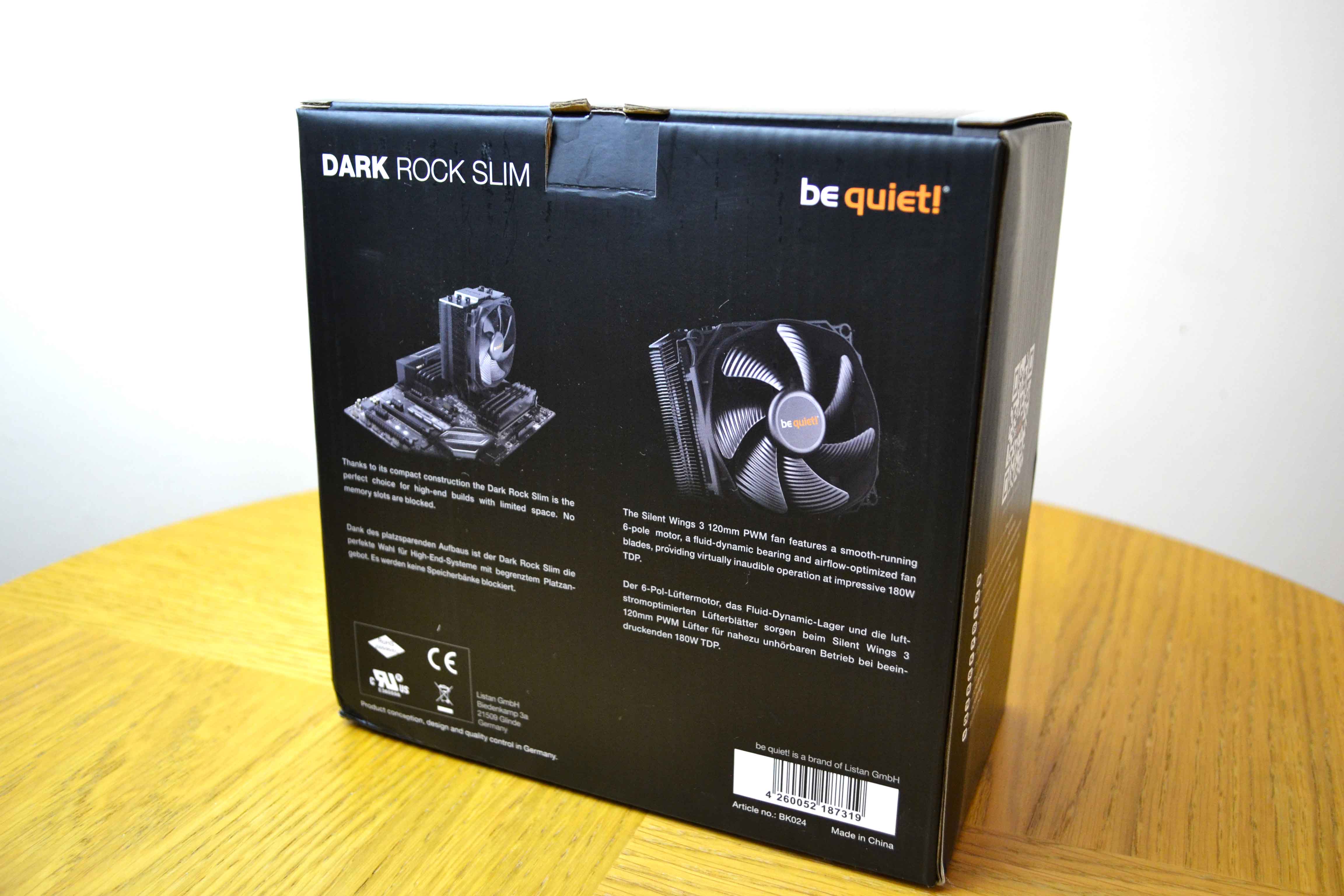 Then one of the sides gives us the full list of specs. 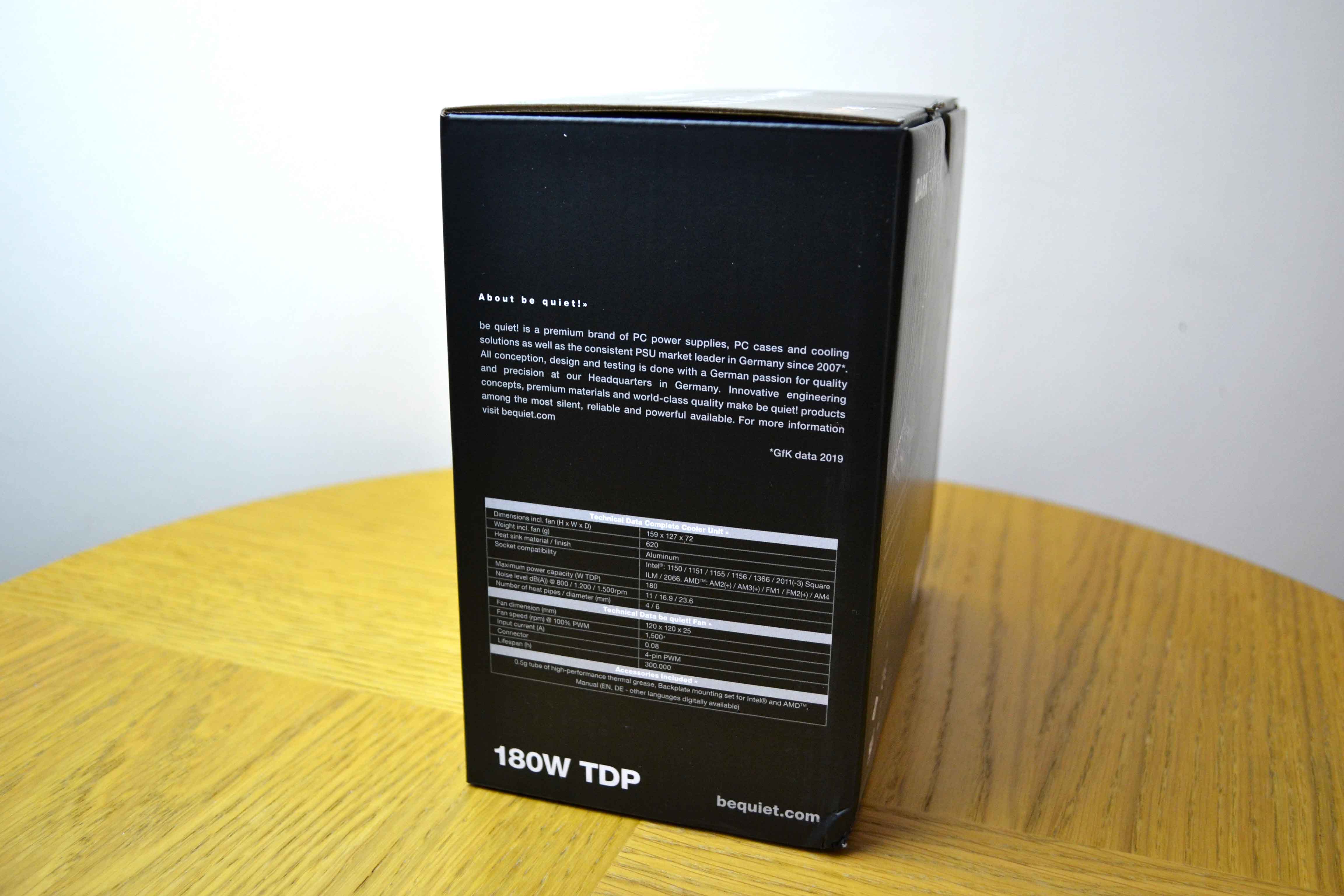 An instruction manual and a warranty booklet are the first things you see when you open the box. 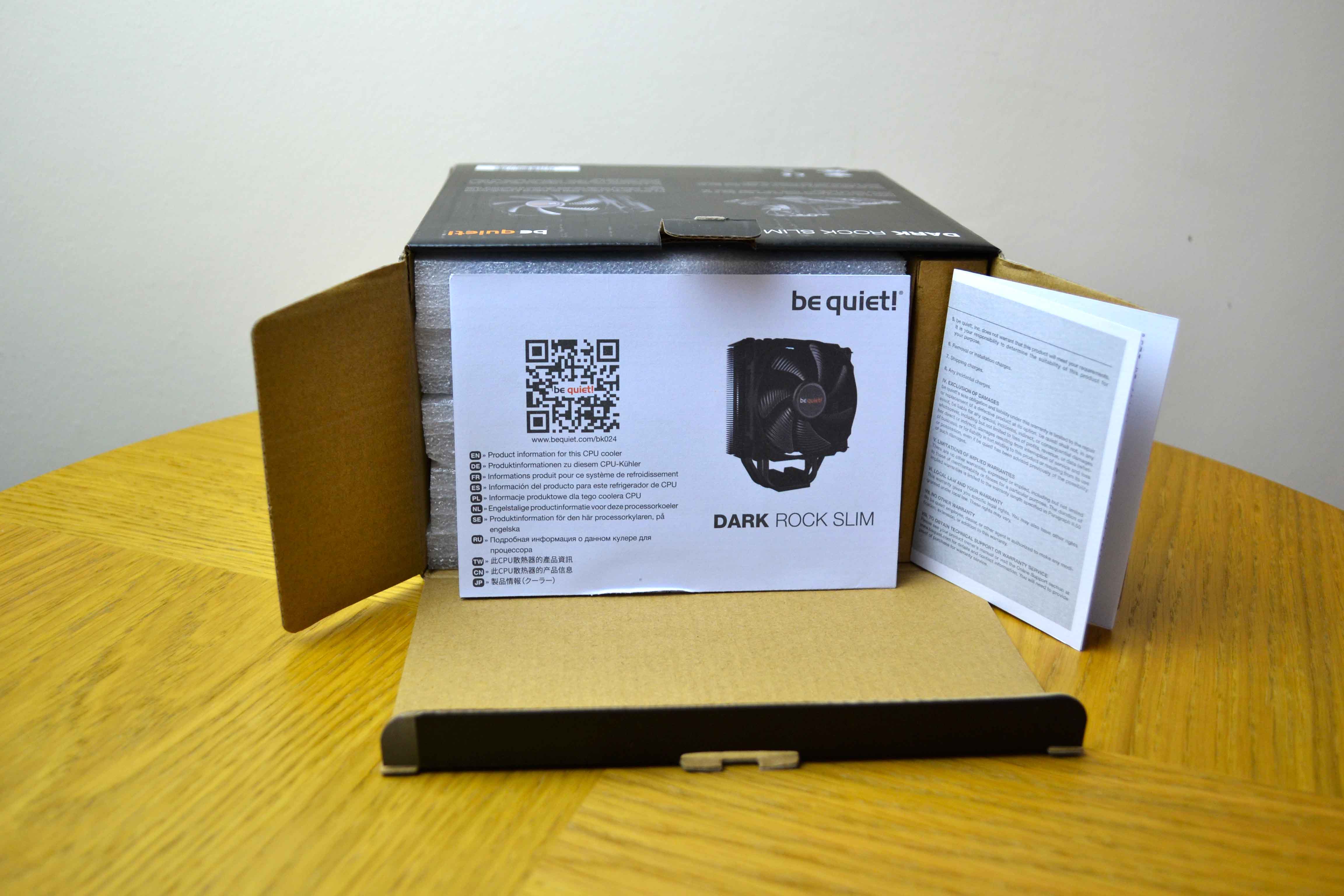 Really like the level of protection Be Quiet! offers for their heatsinks with these custom foam padding. Such a nice touch in how the accessory box fits in. 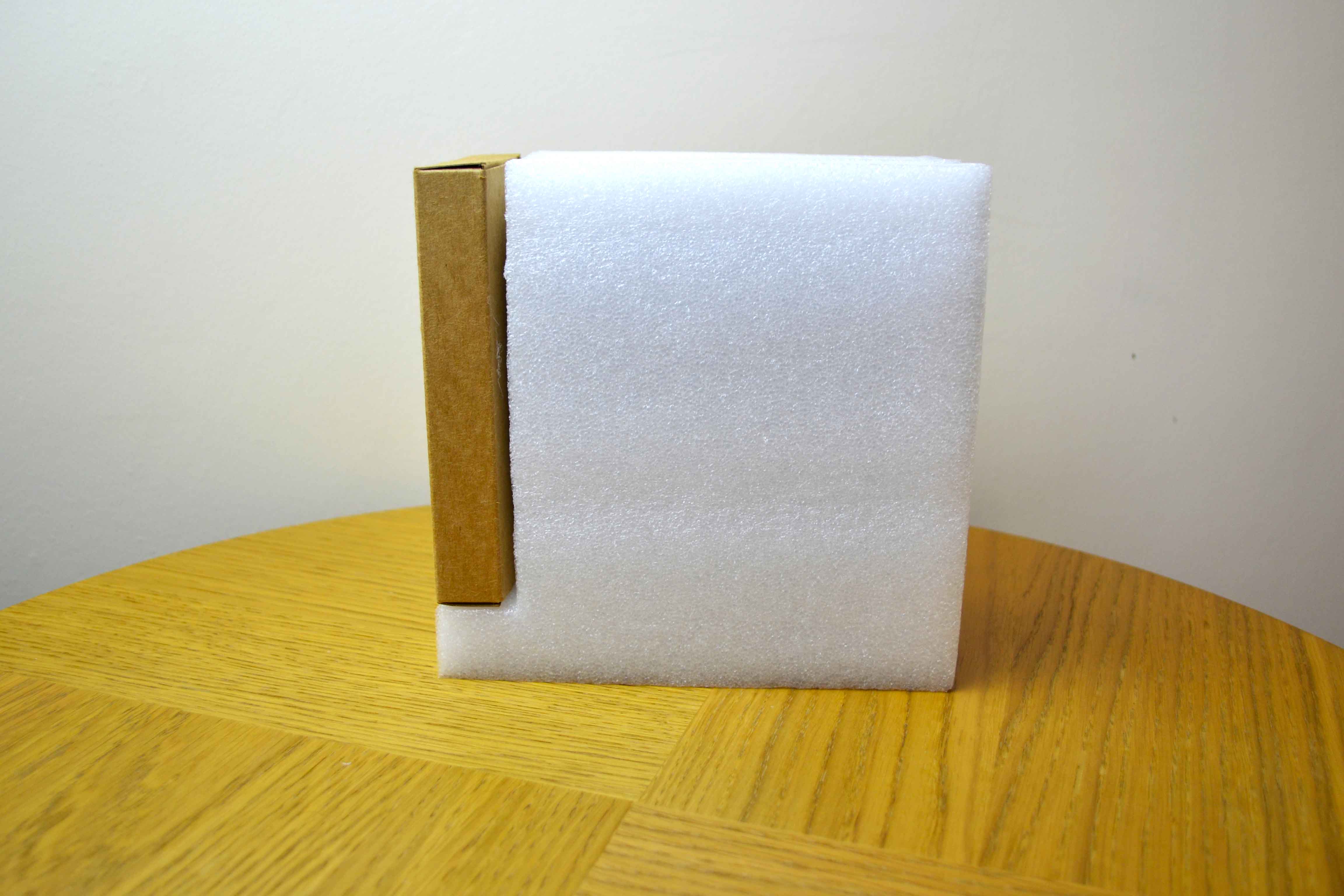 Speaking of the accessories, this is the full list. Basically on the left we have the AMD sockets. This as you will see, is an even easier process to install with fewer less parts than Intel’s smaller ones for example (on the right).

The included 120mm Silent Wings 3 fan looks so advanced with that intricate design which shows the level of commitment to quality. I mean you don’t expect much from a fan that is almost always a simple square frame. Here, Be Quiet! went much further to optimize every millimeter of product. 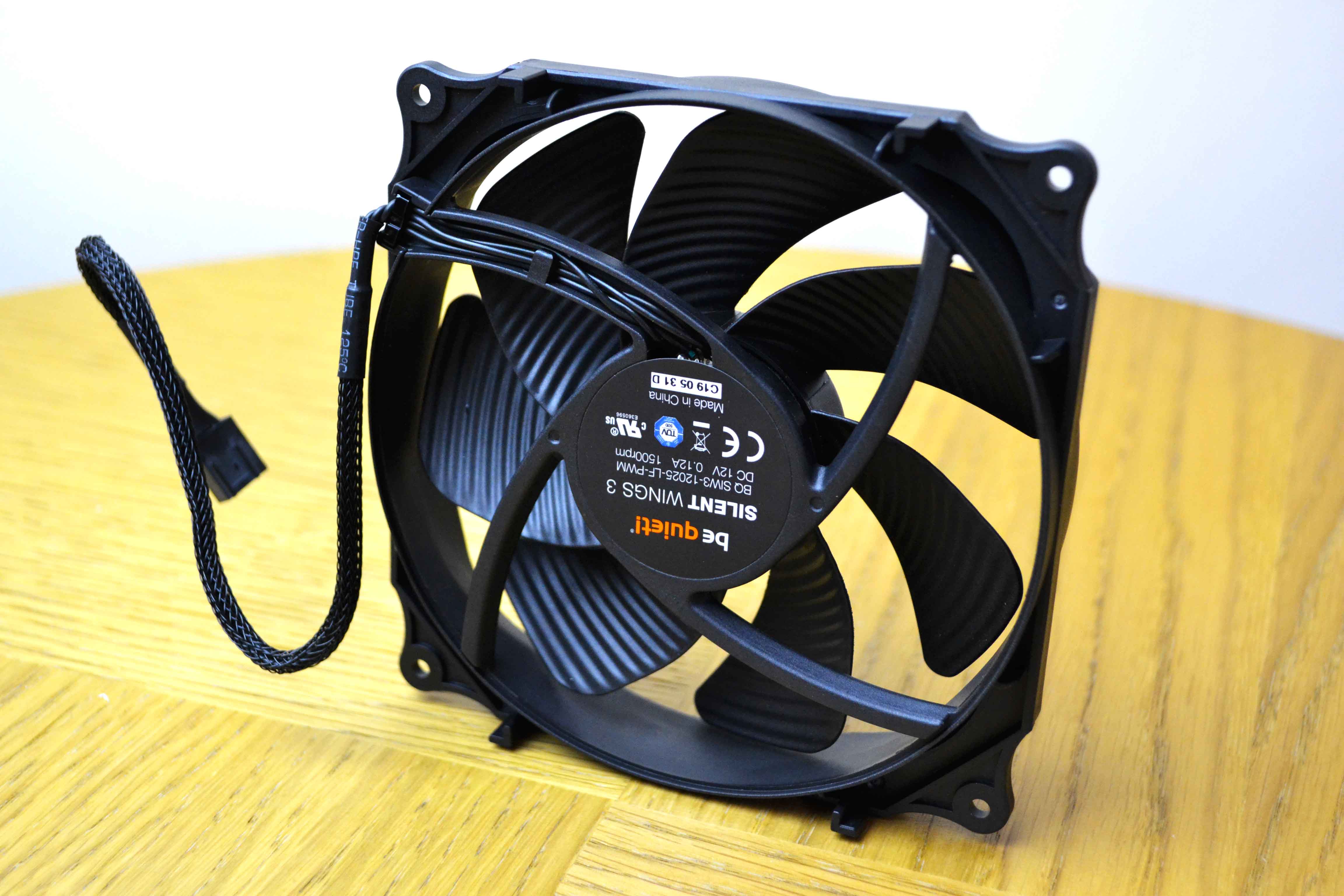 It is rated up to 1500 max RPM for 0.21A with a max noise output of around 24 dB/A. A total of 7 blades with very interesting groove design on both the exhaust and intake sides. The 4 pin PWM cables is fully sleeved of course. 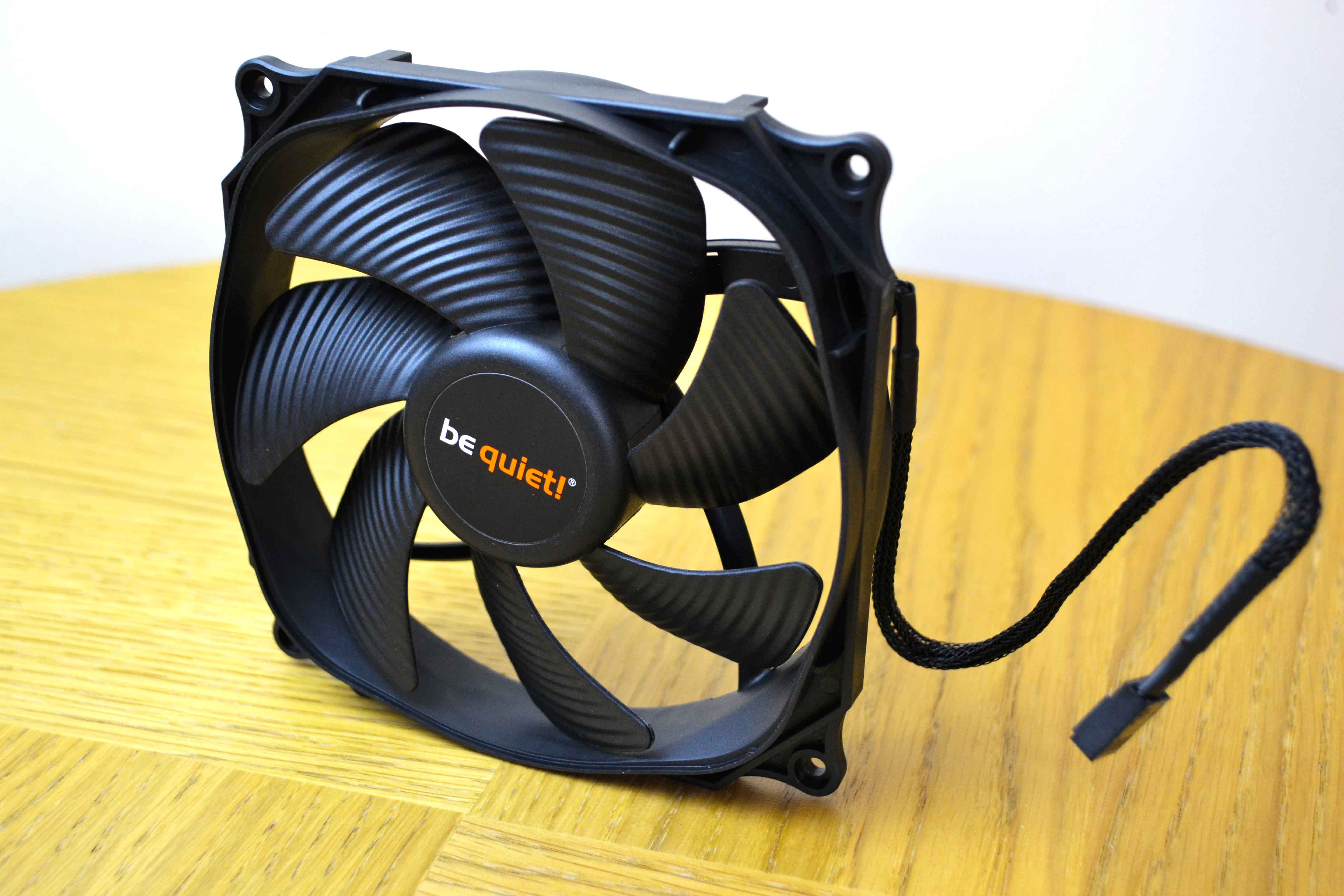 Now for the heatsink which looks like a dark matter prototype for Batman ! 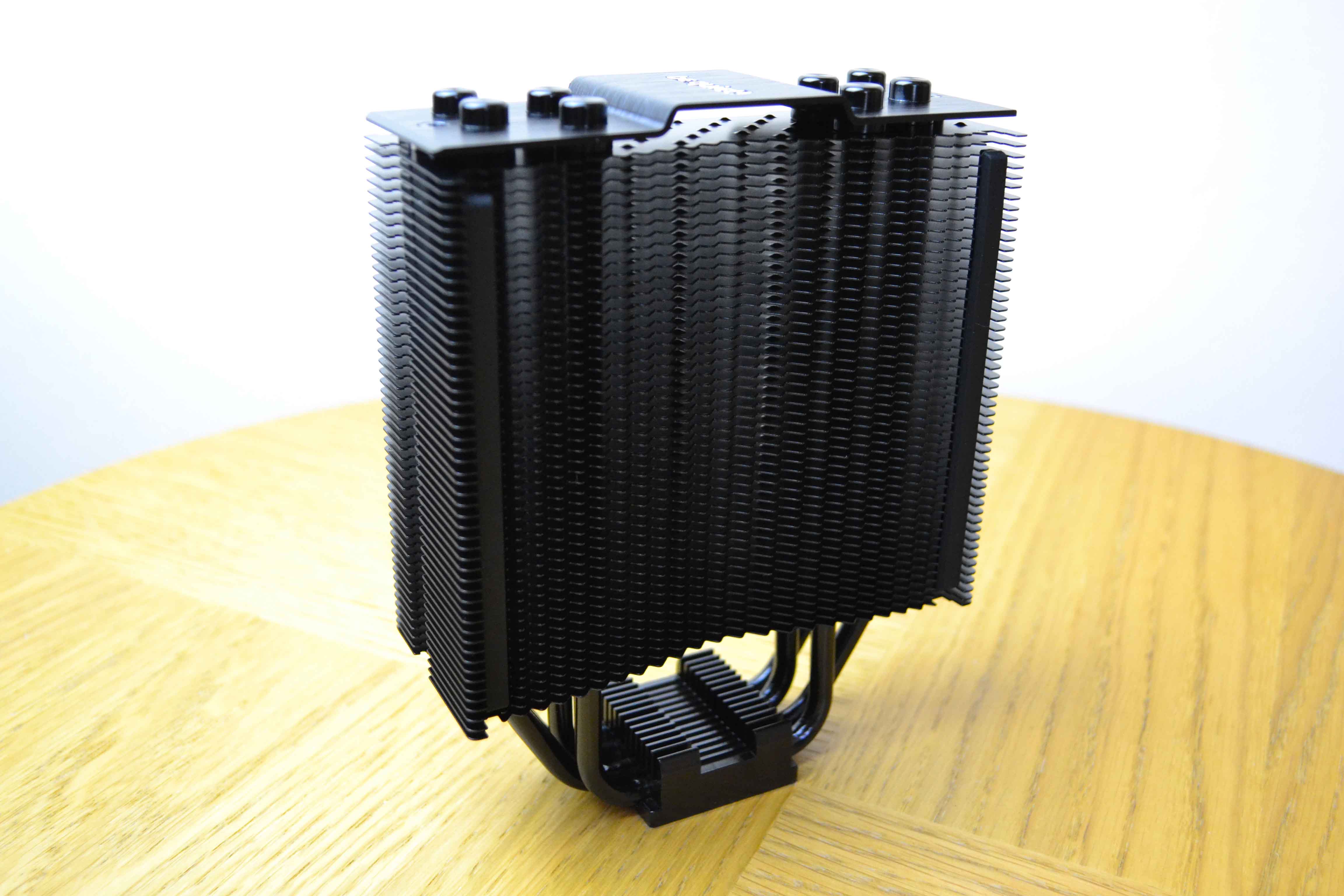 We have a solid construction from the U-shaped 4 heat pipes which end in caps for each one from this top plate. The black powder coating with brushed finish make this cooler look amazing, as per all of their Dark Rock heatsinks. 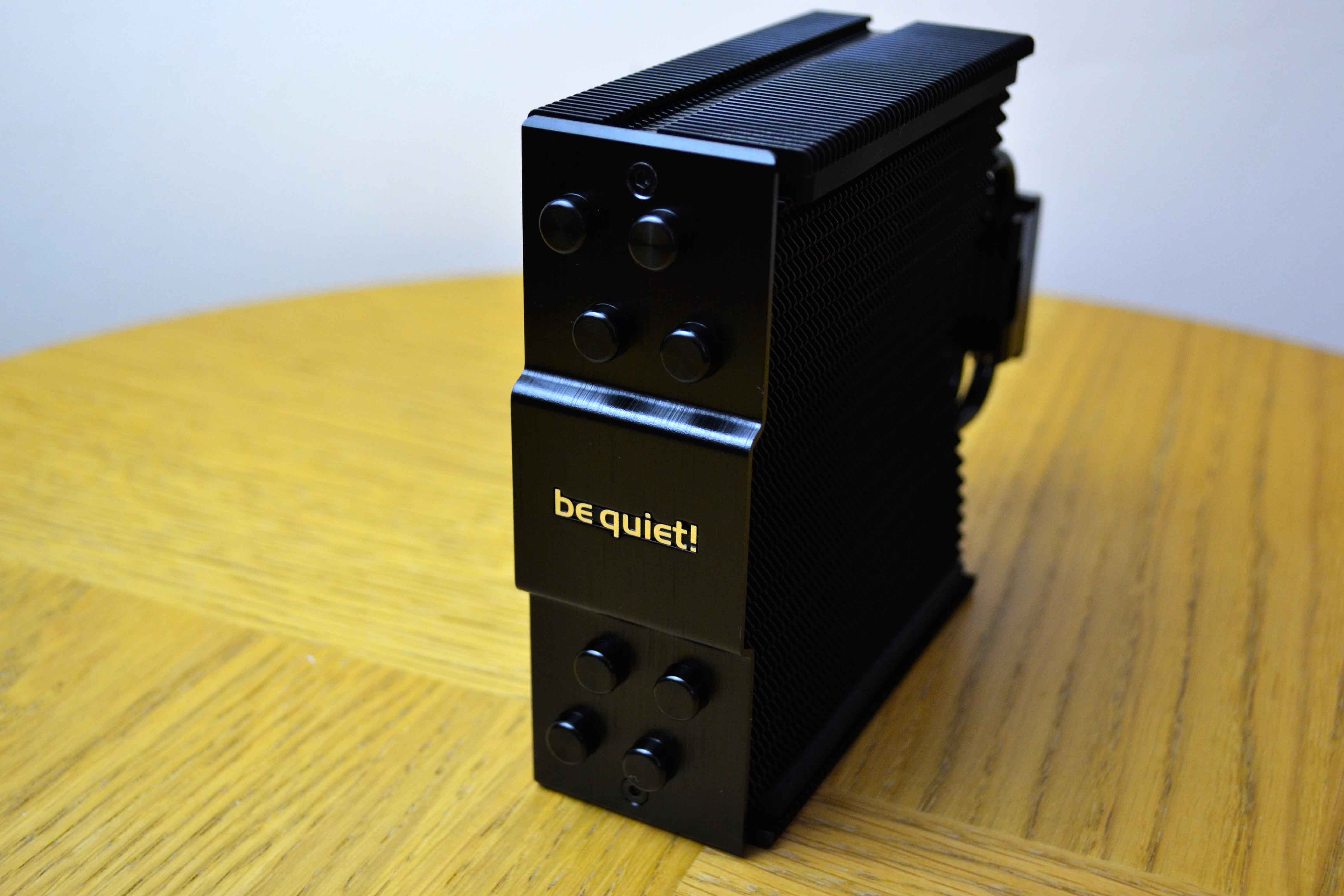 The main side where the included fan is to be mounted, already has these pre-installed plastic rails for vibration dampening and also make sure the fan will sit snug and won’t go anywhere. 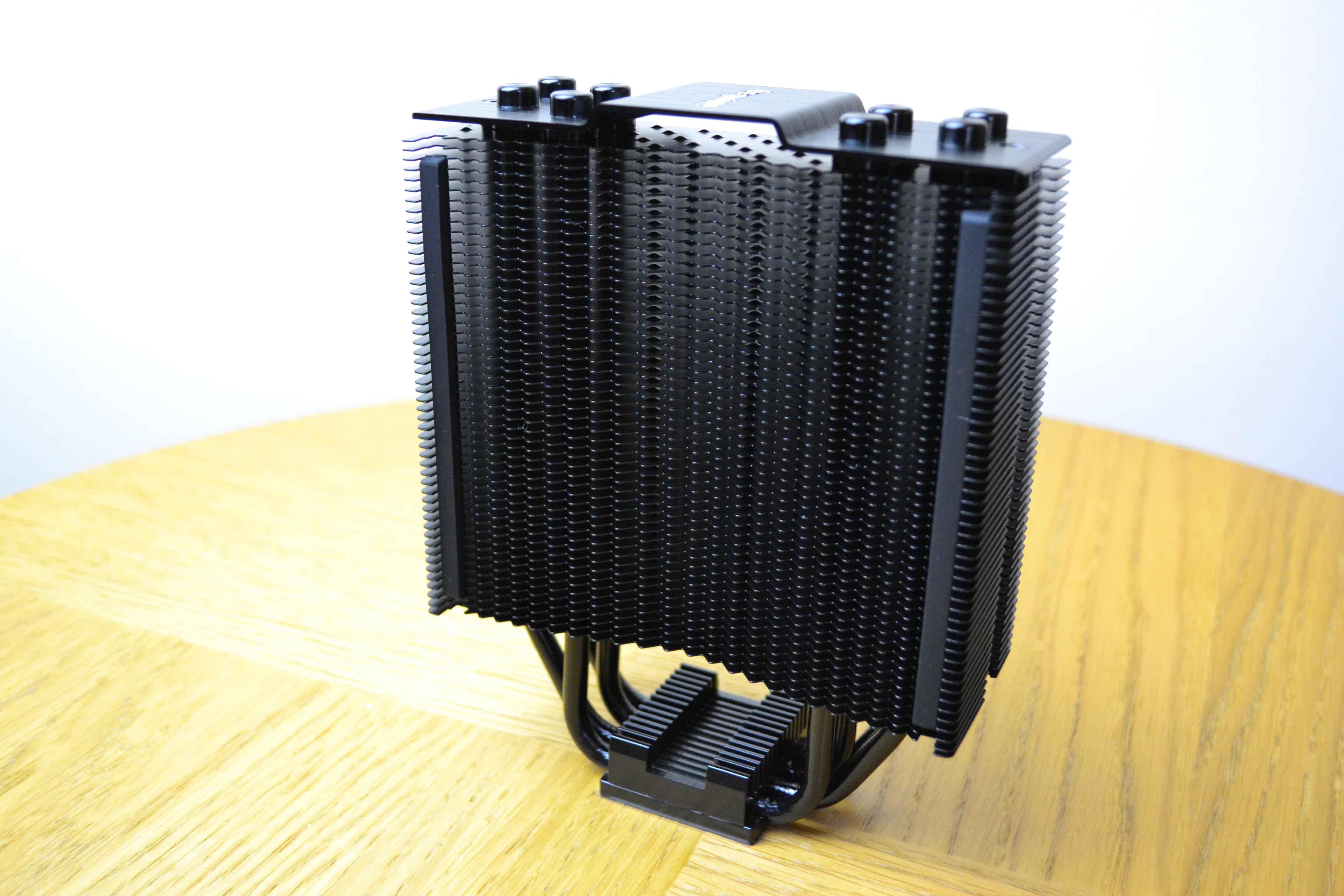 From this angle, we can see that this side of the heatsink has a concave design. 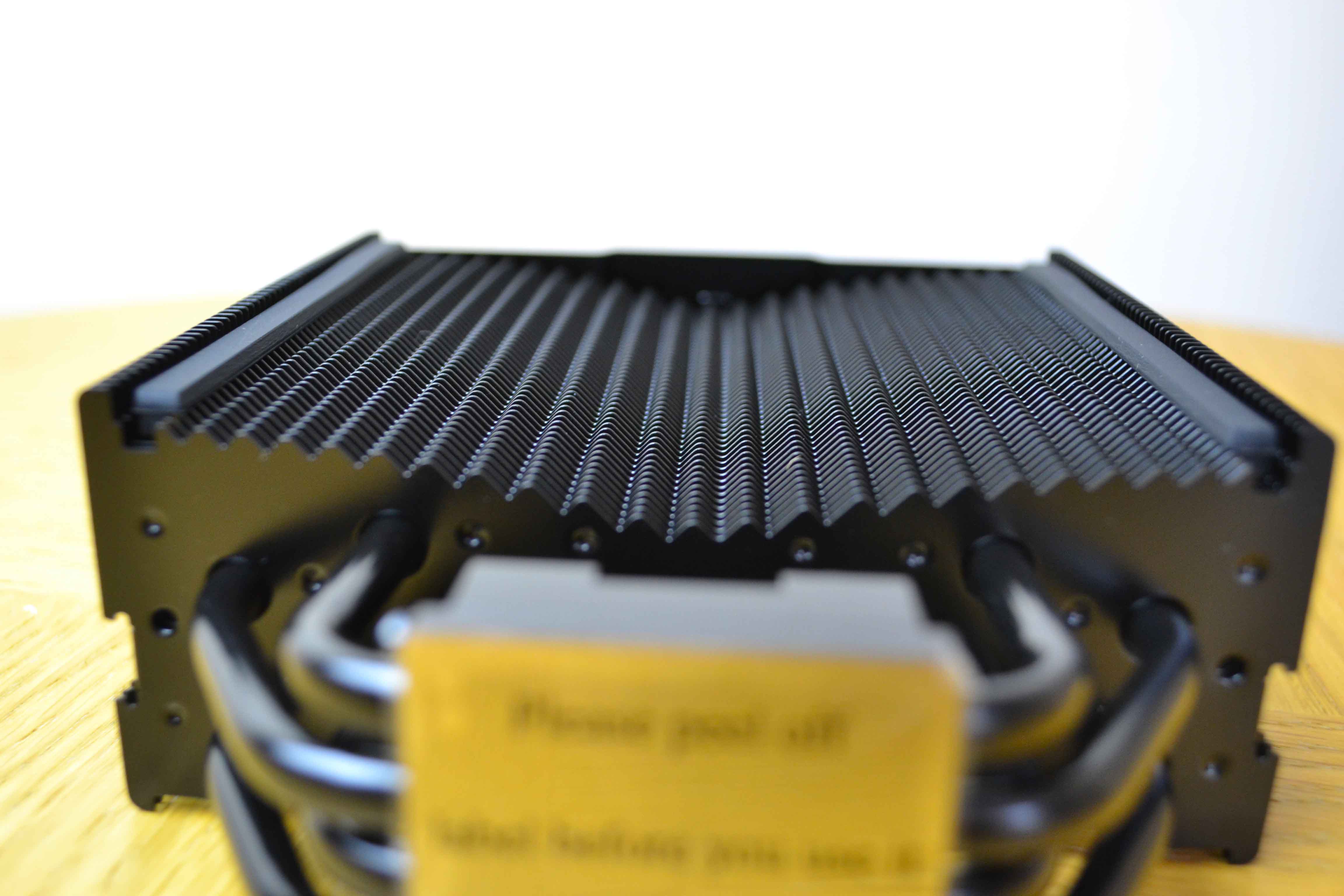 The other side has a flat level but with these variation in the fin pattern. 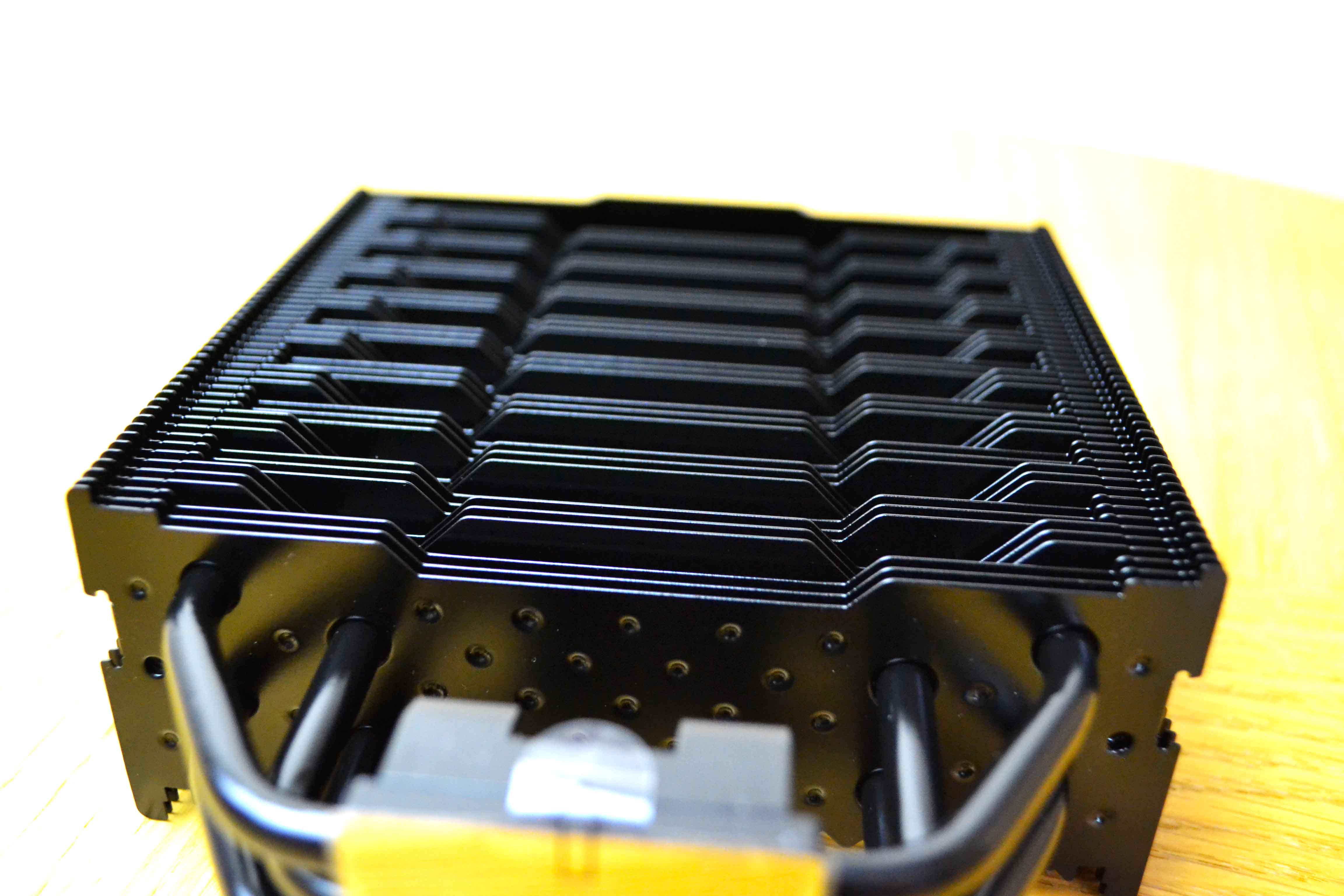 Moving down to the cooler’s base, on the top it has extra fins that act as cooling and also for securing the cooler down with a bridge plate. 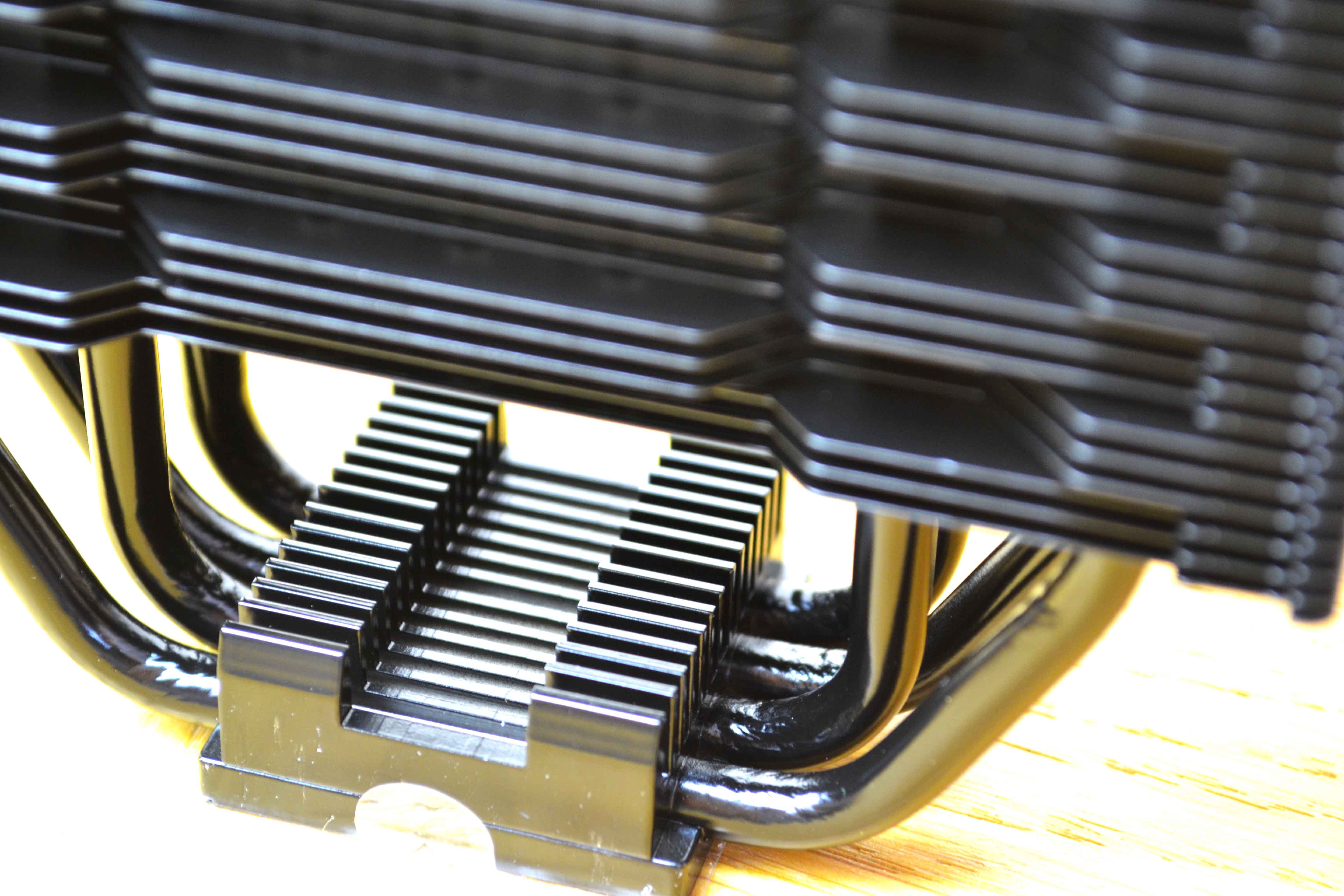 The base is polished but not to a mirror finish. You can’t tell from this angle but it is perfectly flat – you can see this from the second picture with the spread of the thermal paste.

How it looks with the fan on and a size reference next to an energy drink can. 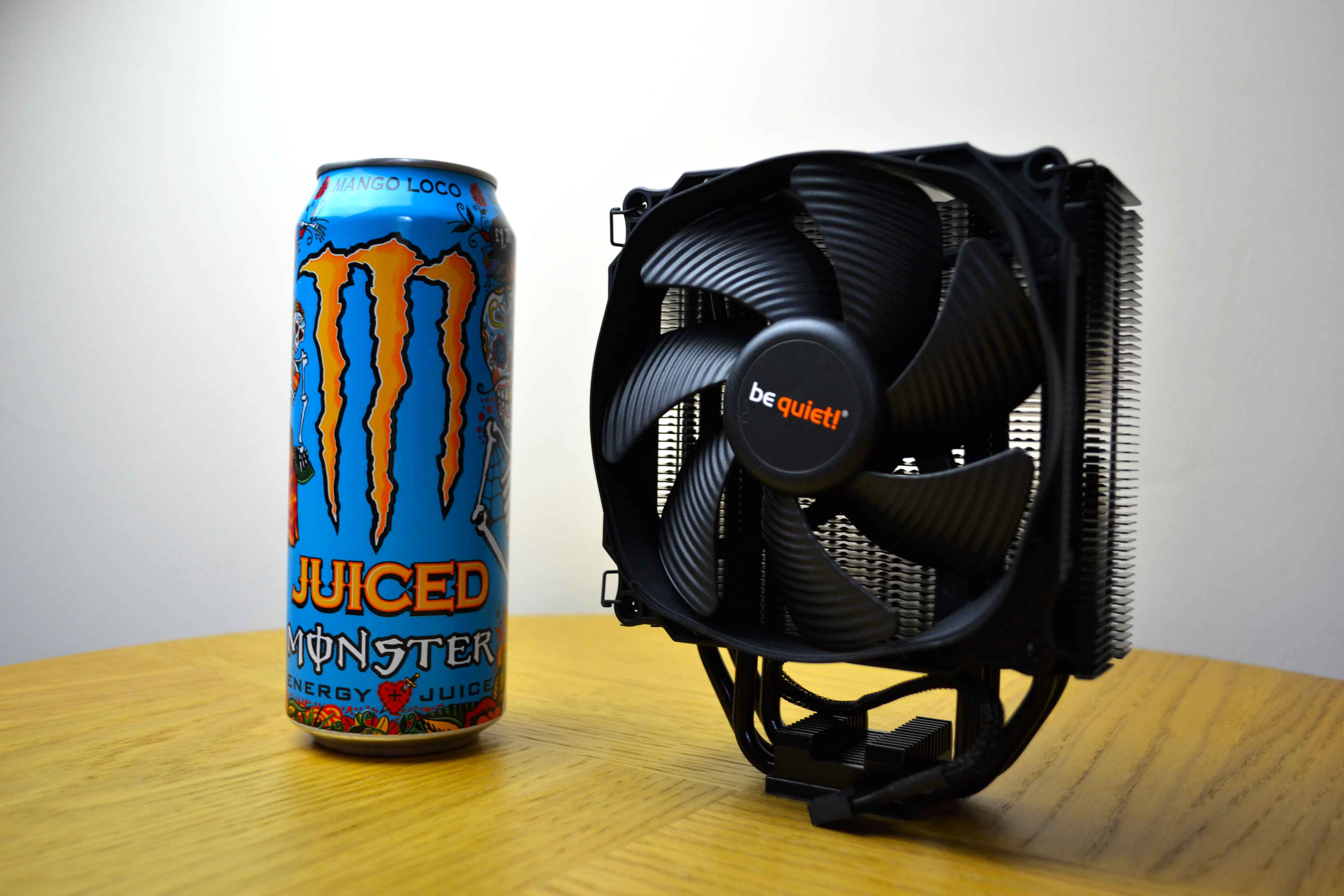 Like I mentioned before, since our testing platform is based on AMD AM4 socket, the installation process will be very straight forward. Almost the same as the LGA20xx from Intel since they also have an integrated bracket on the back. 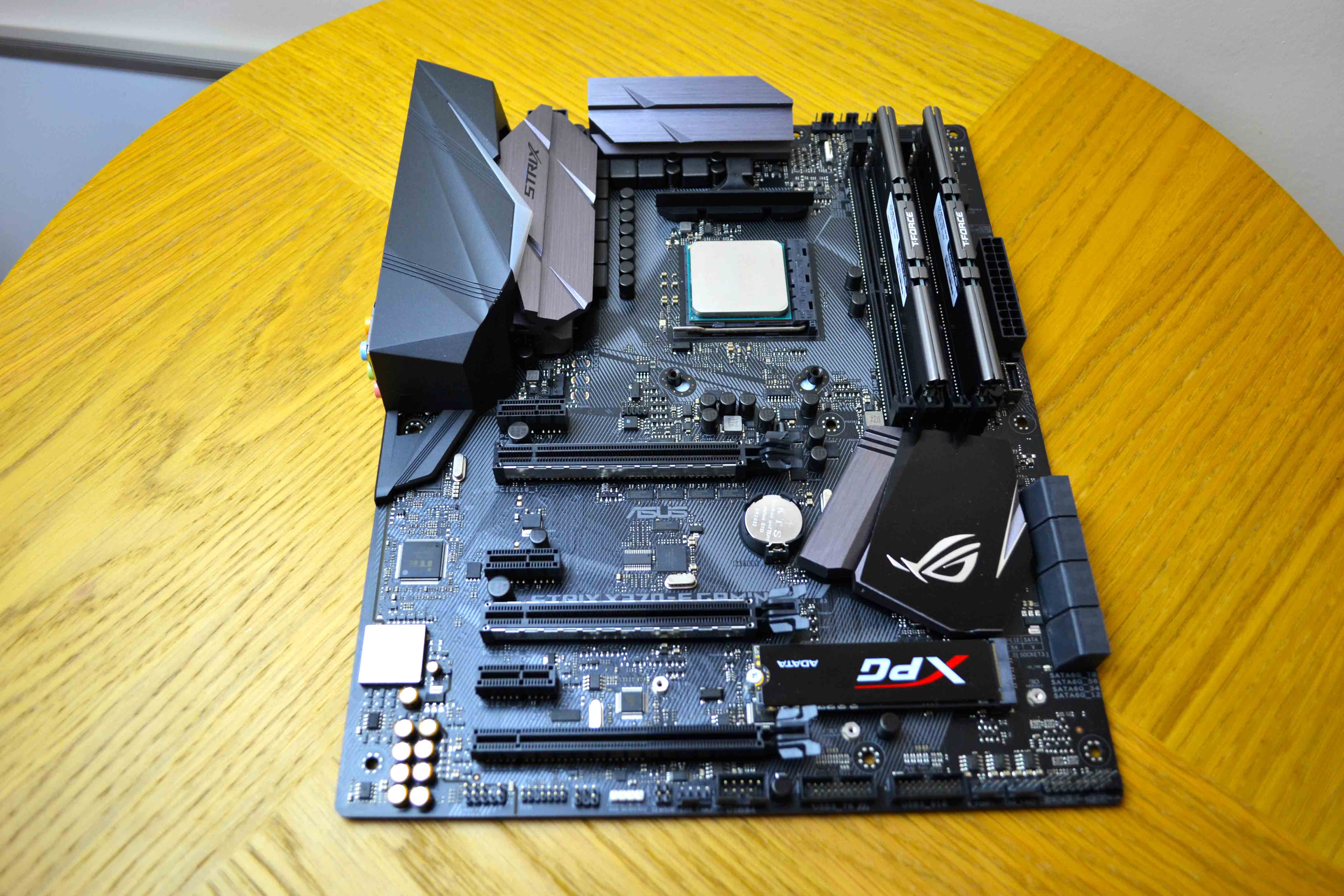 First step is to remove the stock AM4 side brackets since we will use the included backplate from the motherboard. 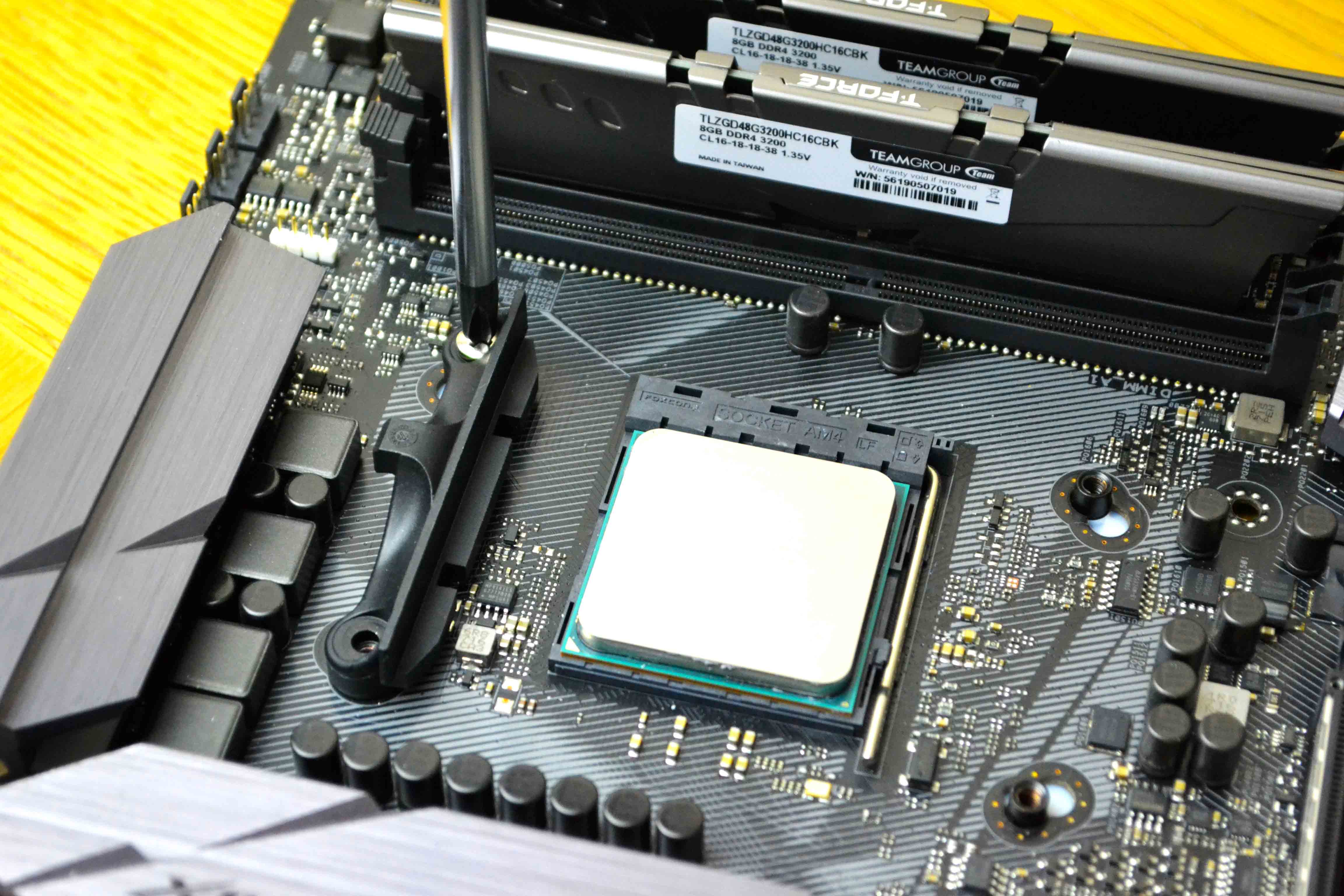 Slide in the spacers. 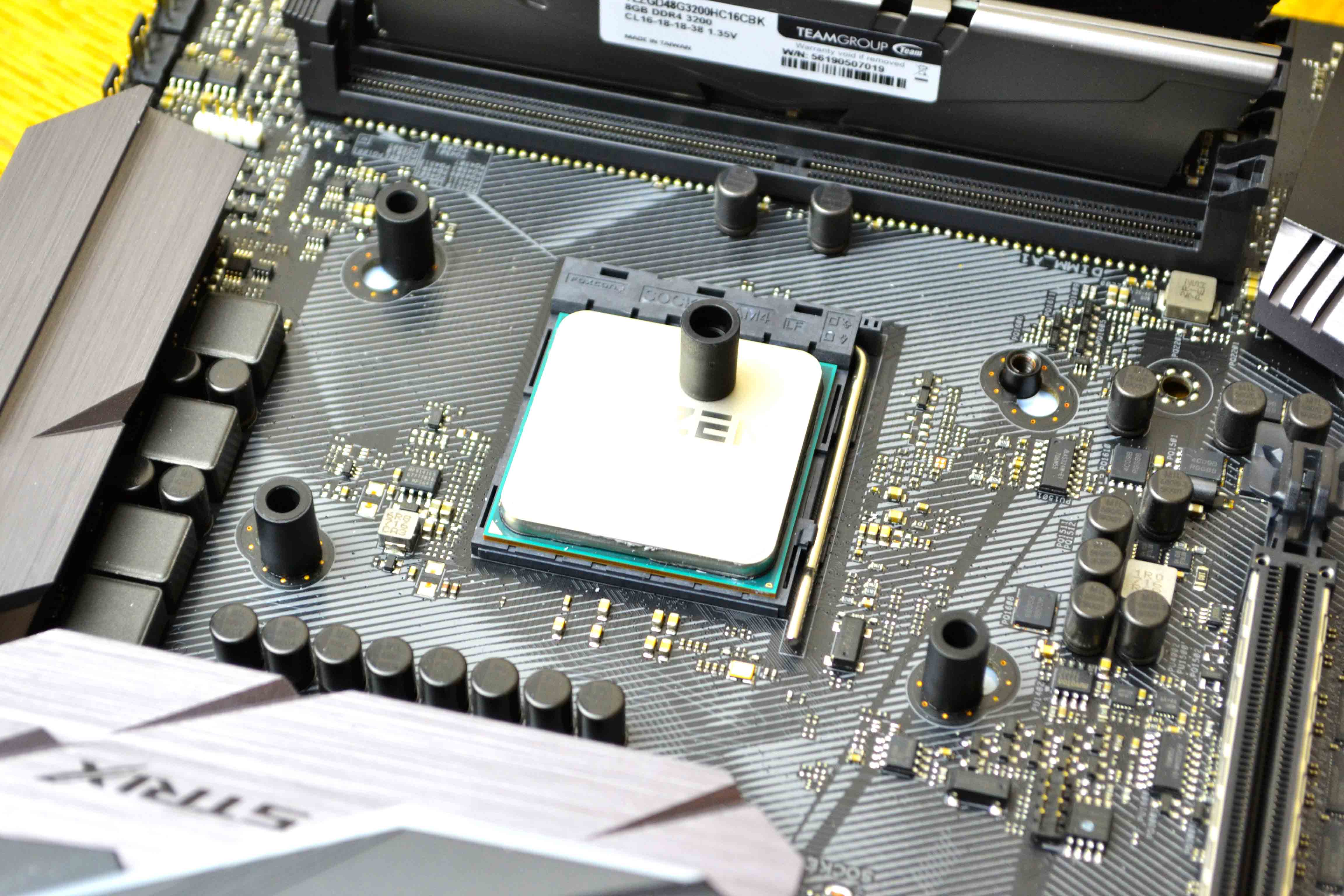 Then screw in the side metal plates. 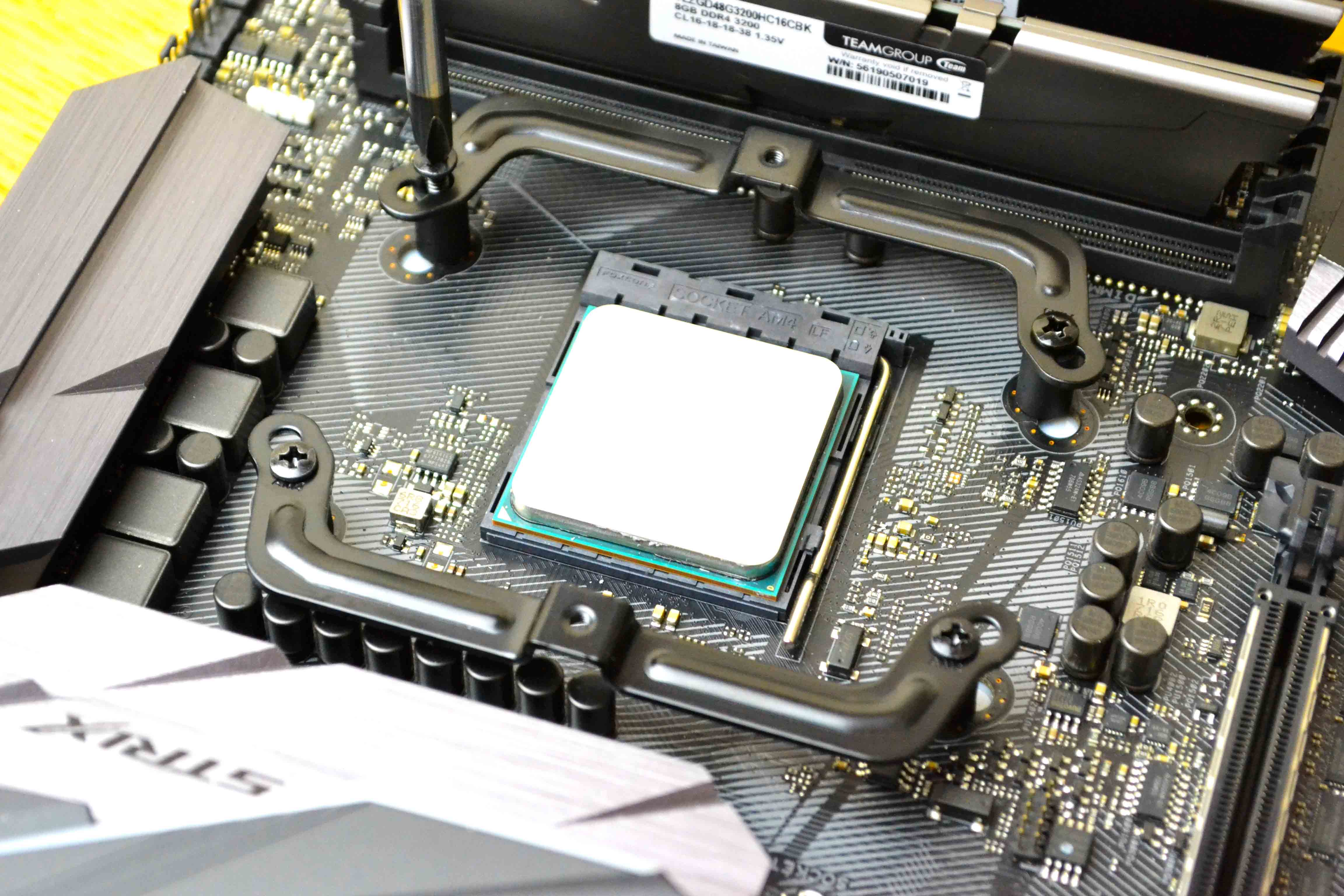 Apply the included thermal paste. You should have enough for one or two uses. 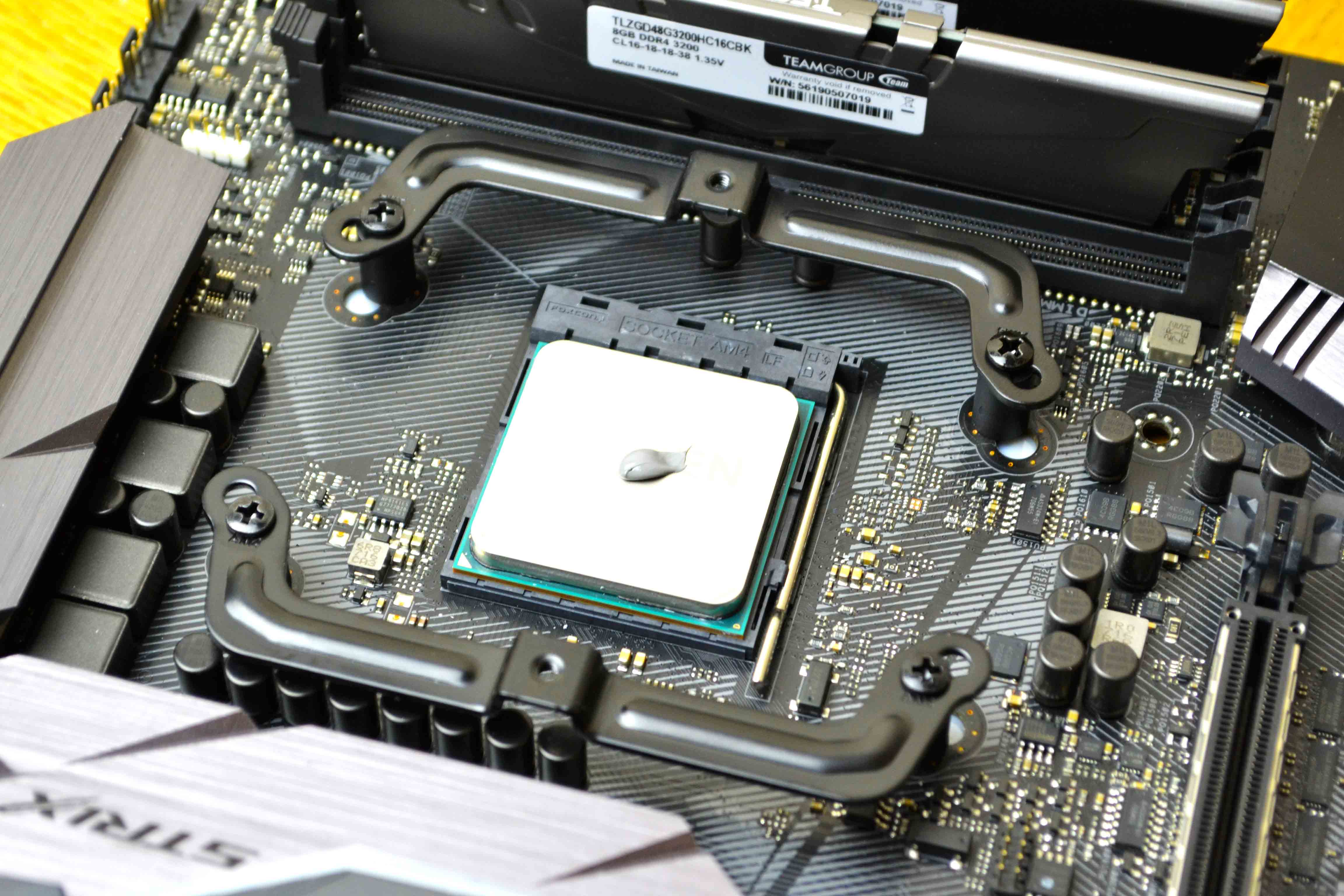 Secure the heatsink via this metal plate. 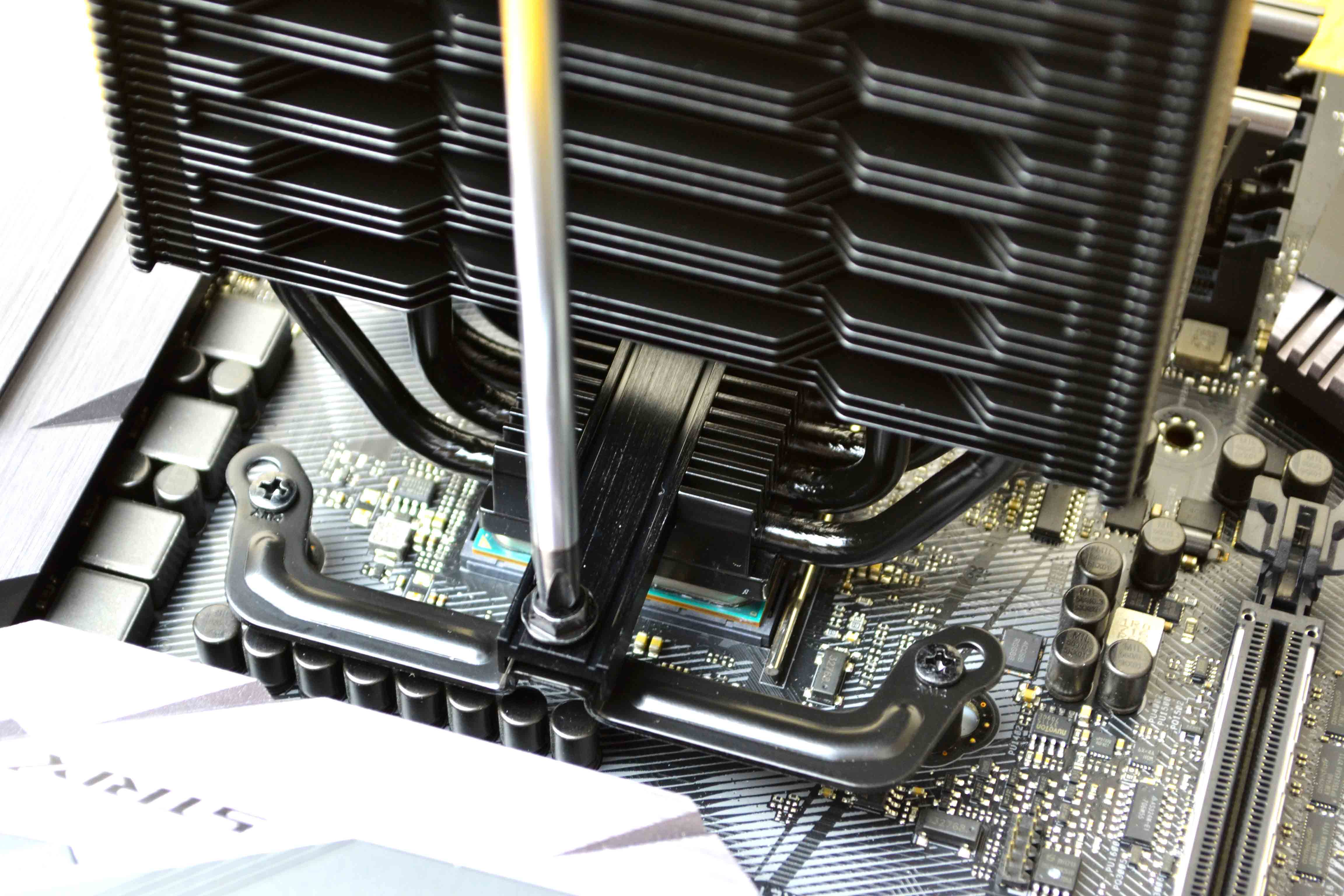 Then attach the fan and that’s it ! You can also mount a second 120 mm fan since you have an extra pair of metal clips. 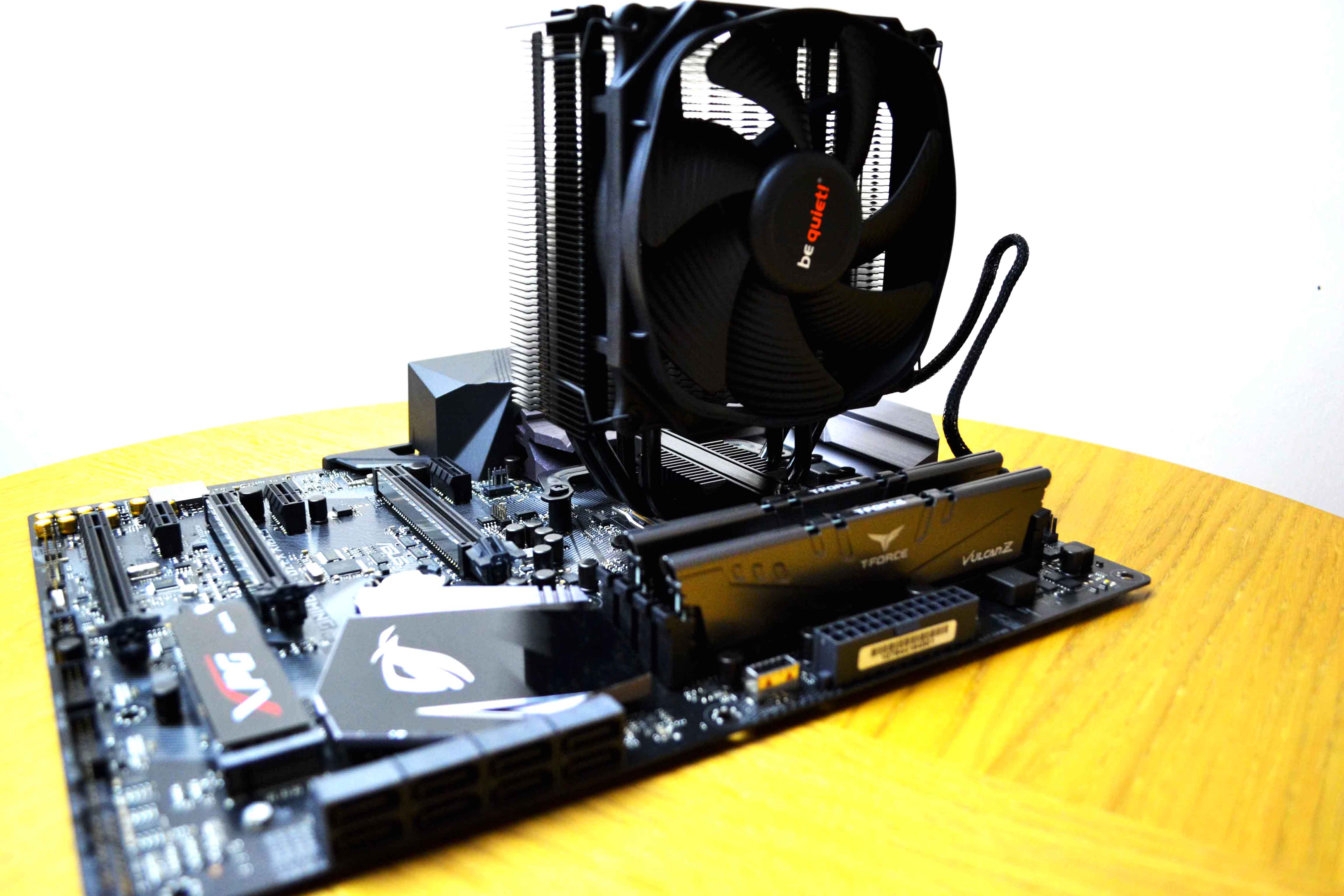 Clearance wise, there is no problem at all even with tall RAM kits, like the Team Group Night Hawks RGB at 53 mm in height. 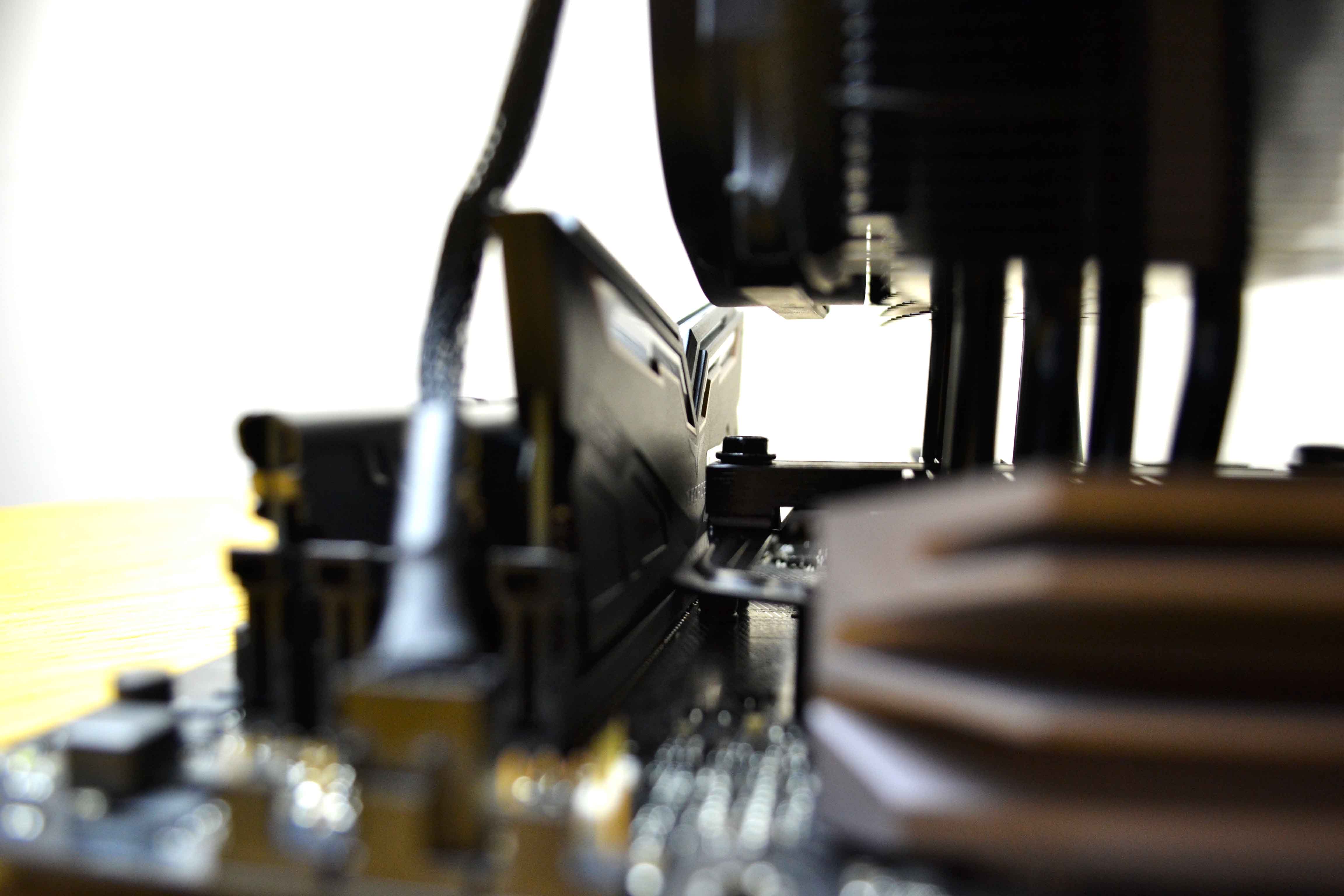 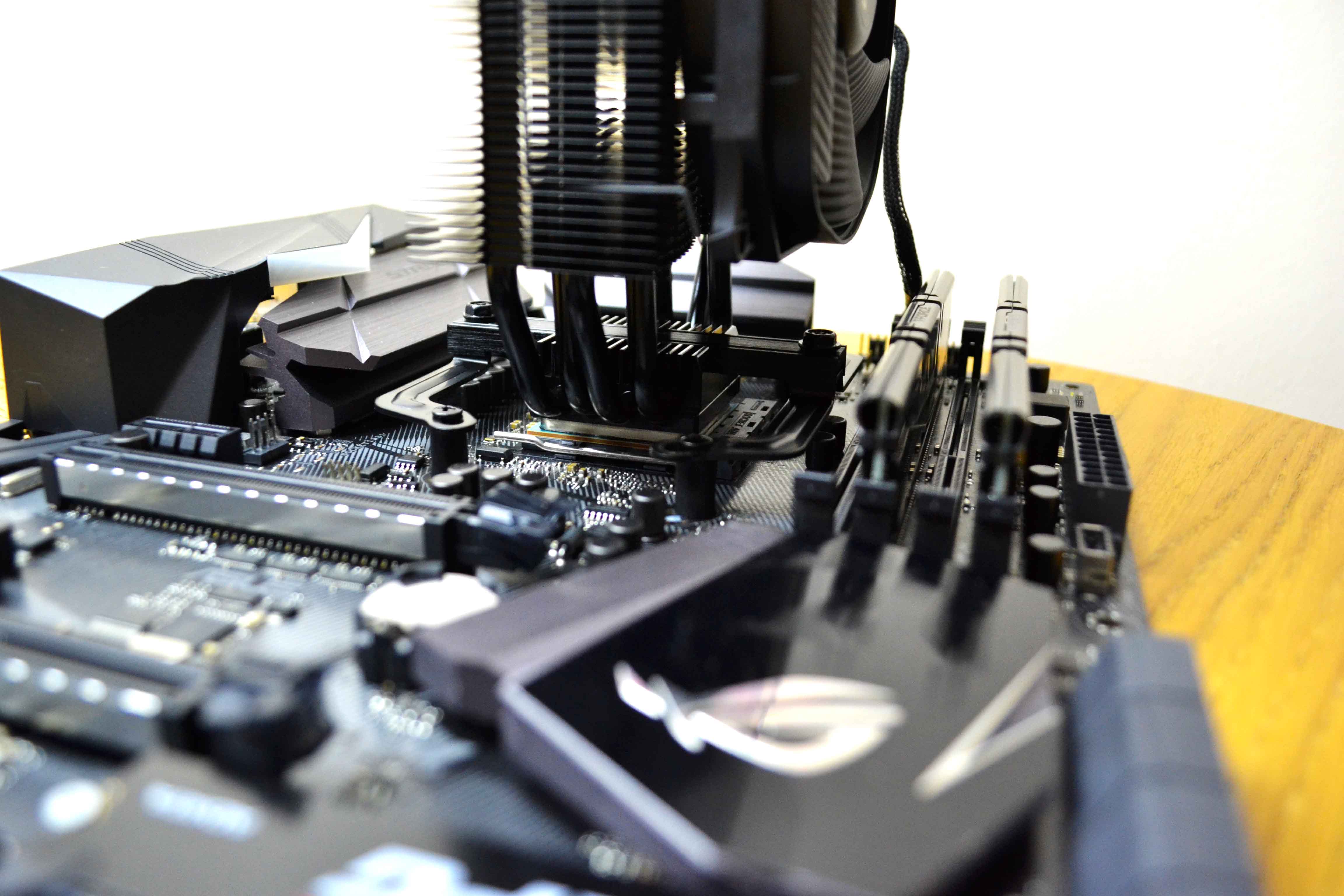 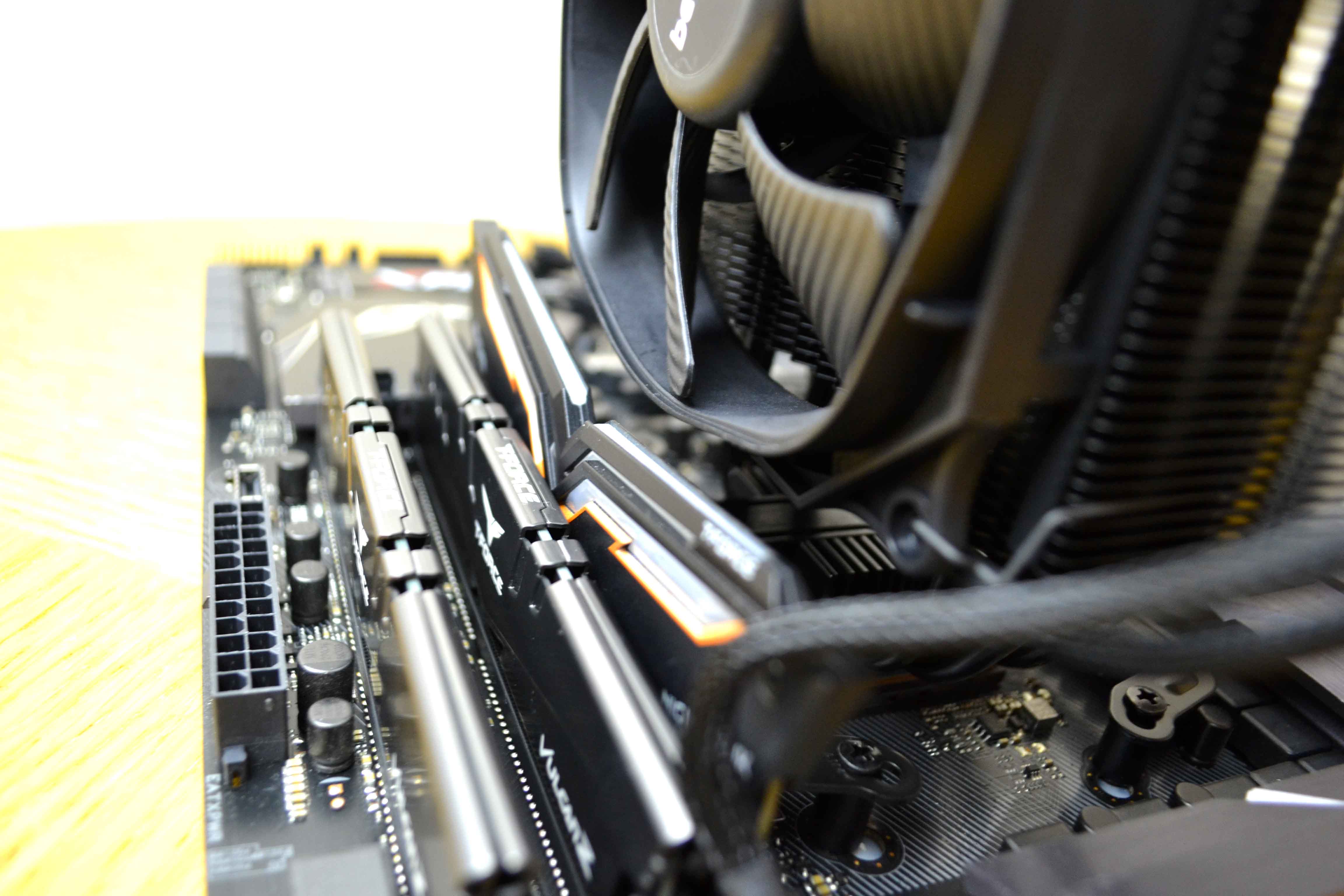 These being said, it’s testing time!

The AMD Ryzen 7 1700 8c/16t CPU will be tested in 2 main scenarios: at stock settings and then we will overclock it for 3.8 GHz for 1.30v. For both scenarios we used the Intel Burn Test utility, set at ‘Very High’ stress settings, as the main torture test, followed by AIDA64 and some CPU benchmarks. Any results over 90° C in any condition are considered a fail.

Room temperature was a recorded ~ 21°C.

The thermal paste used was the one that came with the included bundle of the Dark Rock SLIM.

We will compare the results of the Be Quiet! Dark Rock SLIM between another 120 mm air cooler, then the AMD stock Ryzen 7 Wraith Spire RGB cooler. I will employ a synthetic test in Intel Burn Test to simulate a theoretical absolute load on the CPU which will dump the most heat and fully test any cooling system’s potential.

Resolution for our test game FarCry: New Dawn, is set at 1920×1080 with everything cranked to the maximum quality settings and the refresh rate is locked at 75 Hz.

Let’s start in order of CPU load difficulty. First up is Cinebench R15. On the left is the Ryzen 7 1700 in stock form while on the right we have the results for the overclocked scenario – 3.8 GHz @ 1.30v.

Then Cinebench R20 is a more modern up to date multi core benchmark suite. So naturally we will see a bigger load and thus a larger temperature figure that R15.

In AIDA64 we isolated the stress test just for the CPU and thus we get this temperature numbers:

Finally from the synthetic side, the Intel Burn Test gives us the highest temperature reading. 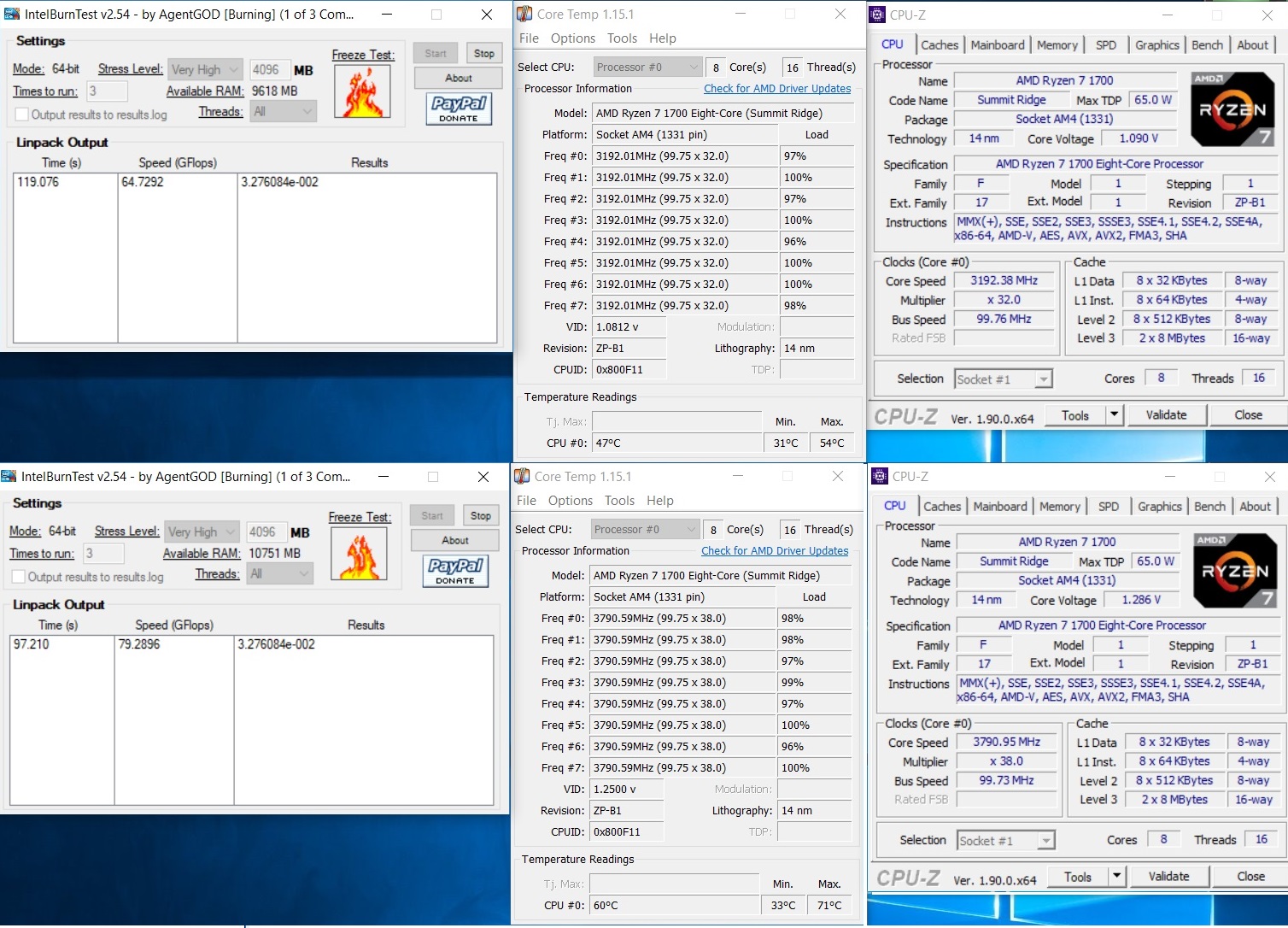 Gaming wise, you will have nothing to worry about.

Clear win under noise results for the Dark Rock SLIM. It is that good !

The Cooler Master 212 RGB has the advantage in our charts of those theoretically extra 500 rpm, thus a higher average per the auto % RM fan curve with the cost of extra noise output of course. But the Dark Rock SLIM still delivers really good results even when you OC your CPU. Noise output is just awesome, truly a near silent operation in an auto % RPM mode. The other company that has mastered silent operation is Noctua so that says a lot about Be quiet! Plus I think the German company has my vote when it comes to looks vs Noctua.

The Dark Rock SLIM excels at build quality and low noise output, there is no doubt there. The only problem I see is that at its current price it might me too much considering that something like the CM 212 Hyper can beat it for far less money but of course being a bit loud. But there you gain some RGB if that is important to you as well. These being said even with one fan, the SLIM can handle an 8 core CPU without a sweat even in an overclocked scenario while offering a truly silent operation.

– Losses to the cheaper CM 212 Hyper RGB Black Ed. cooler
– Fins are easily damaged even when you mount fan with the metal clips
– Expensive considering the competition from CM 212 RGB Black Ed.

Glob3trotters “Recommended” Award – 4 out of 5

Many thanks to Be Quiet! for supplying us with this puppy !