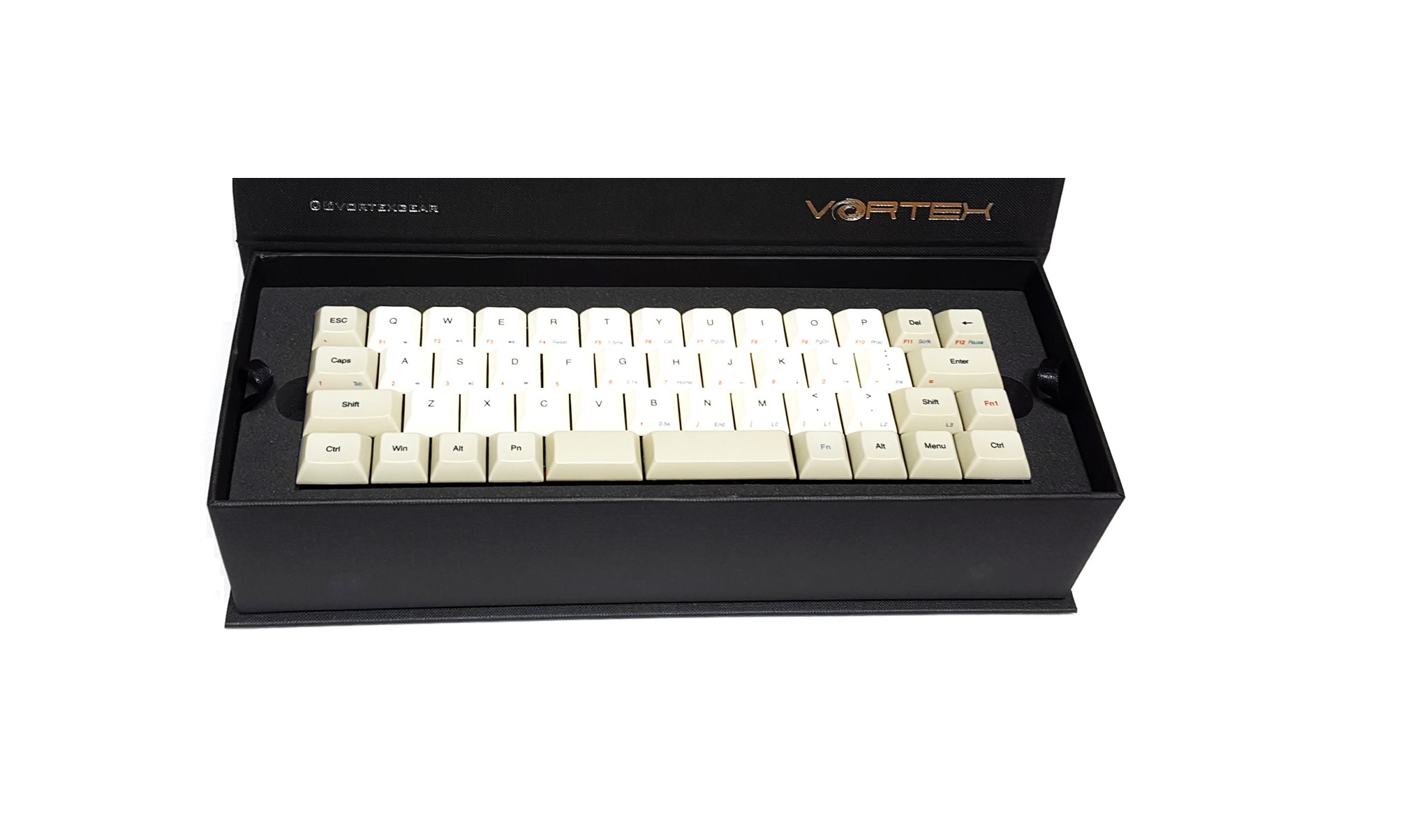 We have found something really unique from Vortexgear. They specialize in making mechanical keyboards in smaller form factors. To give a better perspective, take a quick look at laptops which are a perfect example because, to optimize space (up to 60 % of a traditional desktop keyboard) they use layers. Normally, the shift key when actuated activates a layer on top of the usual key base- shift + c gives C for example. In laptops they take things further by removing the Function keys for example.

Well, Vortexgear has taken things to the next level by removing even more layers of keys and thus creating which is called a 40% keyboard. They are very rare today but we think with the increasing trend of small form factor gear, this will become a perfect tool for travelling and to work on the go. Imagine this paired with the DAN A4 SFX case (review here). Of course there will be a learning curve so let’s see if the Vortex CORE can helps us into this direction.

Or simply Vortex is a small Taiwan based company founded in 2010 with an emphasis on making niche keyboards. Their most popular series is the Pok3r which is a 60% keyboard. They strive to push the envelop and quality with innovative design by introducing the CORE series a 40% keyboard. Also they provide keycap sets as accessories.

Price when reviewed – from Amazon.com

We are reviewing the Black version.

Measuring less than 10 inches long and just 3 inches wide, the Vortex Core 47-Key Mechanical Keyboard is small but it doesn’t lack in functionality, nor in style. Outfitted with 47 Cherry MX switches of your choice, it features two space bars, two shift keys, and two function keys. The hardware is programmed by the team behind the popular POK3R keyboard. With three programmable layers, it gives you access to a wide range of keys and functions, just like a full-size board.

Constructed with an anodized CNC aluminum case fitted with rubber feet, the CORE keyboard is heavy enough to stay put, yet light enough to tote on the go. The PBT keycaps are sculpted in uniform DSA profile. They feature dye-sublimated legends on the top, while the side-printed legends offer a look at the functionality on the other layers. Included is a detachable micro USB cable and user manual.

Now for the specs, the test sample today has:

At first glance it may seem that it come in an ordinary box with just the logo printed on the top and nothing else (which so far is true) but looks can be deceiving, until you open it up. 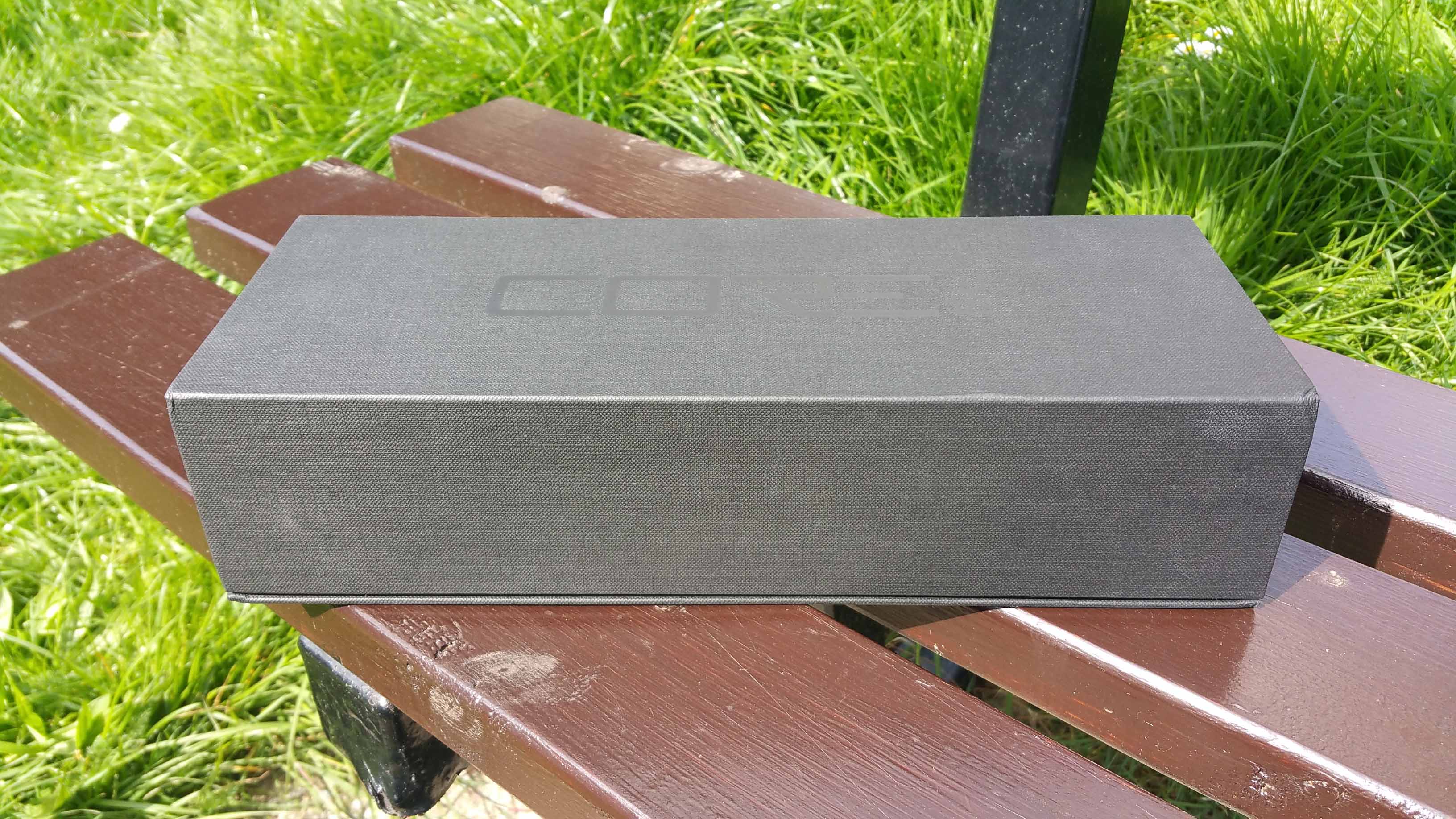 And just like in a box of jewelry, where you keep precious creations, we have the same scenario for this Vortex Core keyboard – a sexy little thing ! Notice that inspiring statement on the top. 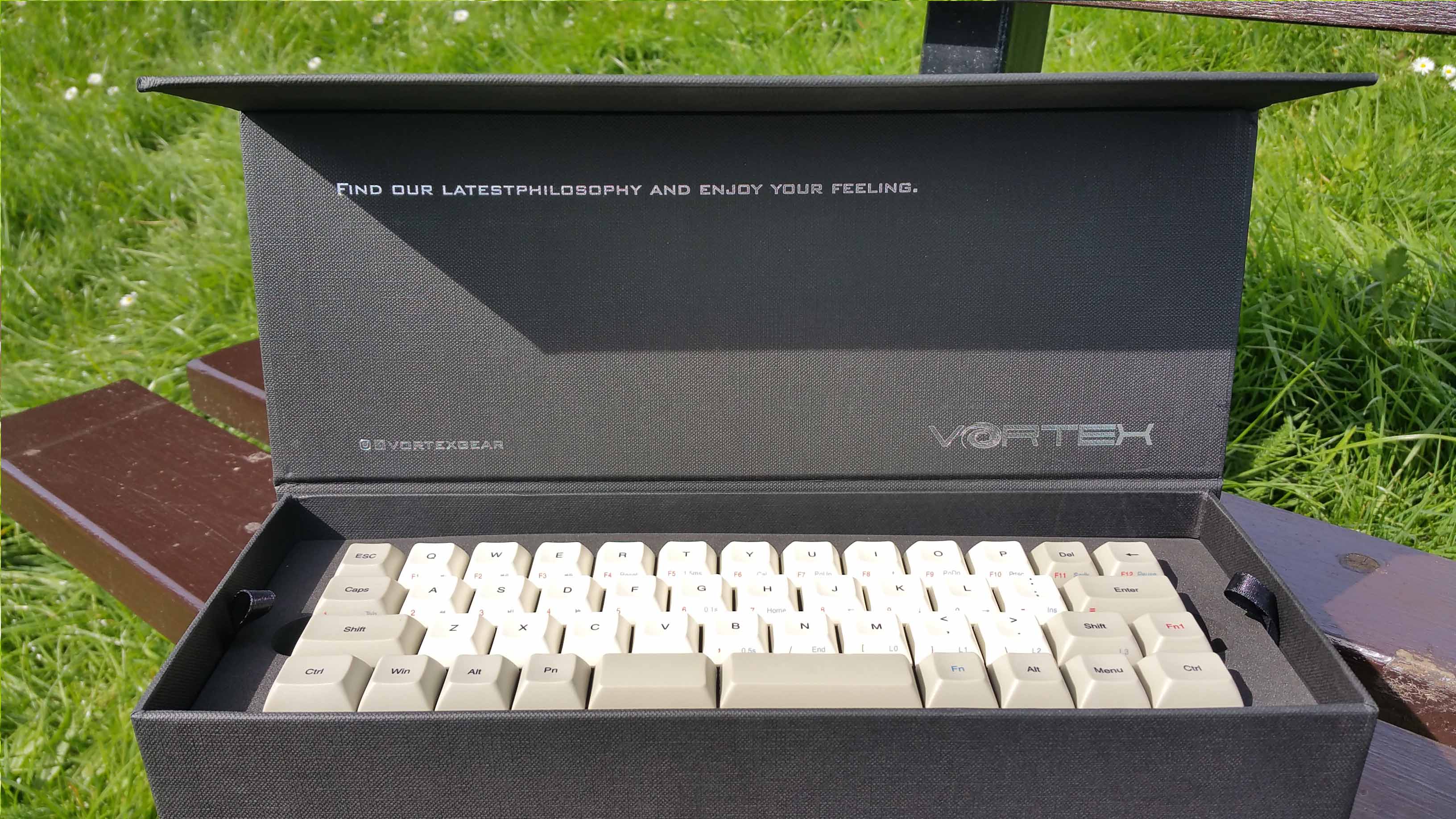 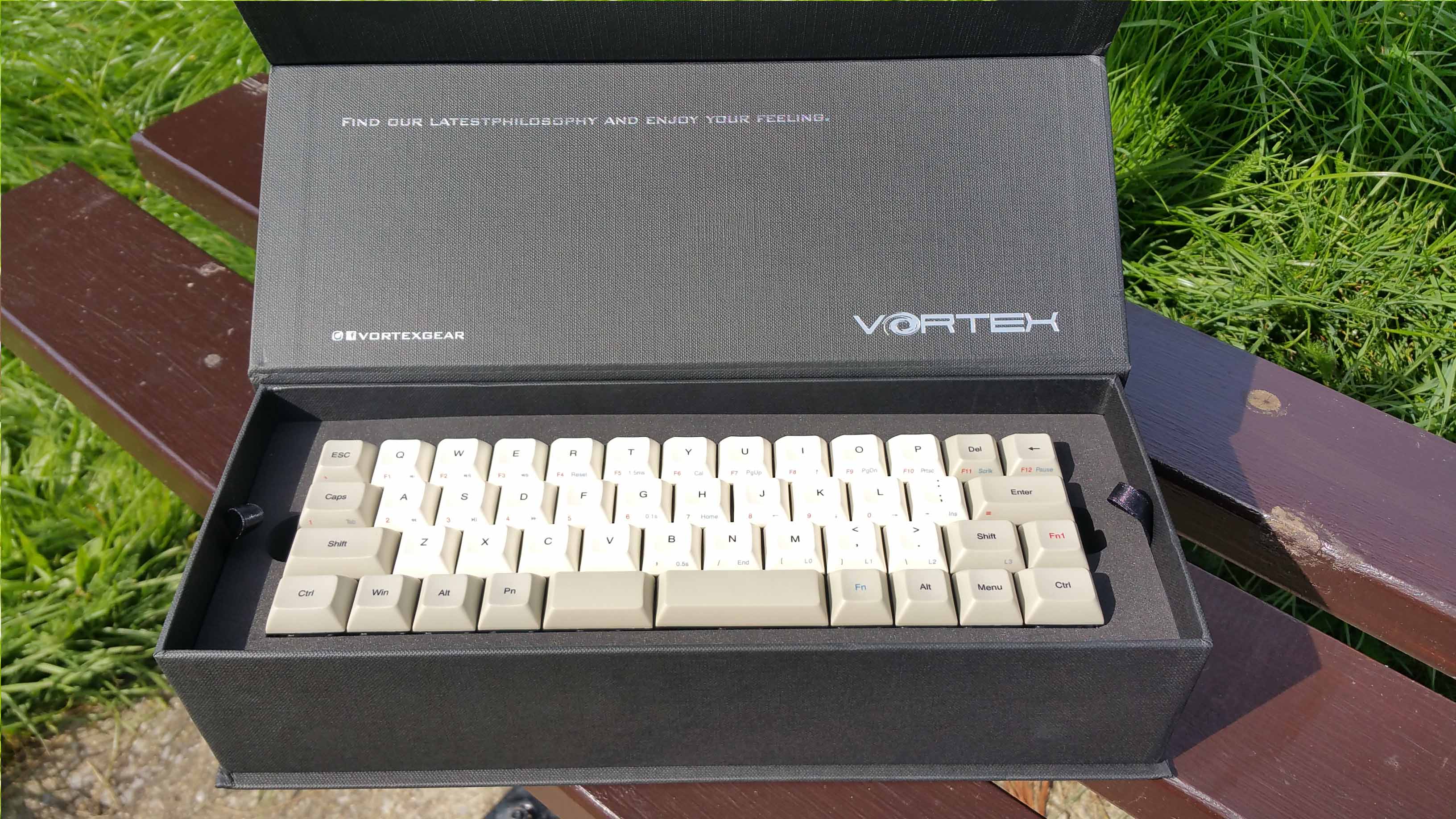 The Keyboard is securely nested in this foam tray which is easy to removed by the 2 straps on both sides. Love the attention to details so far. 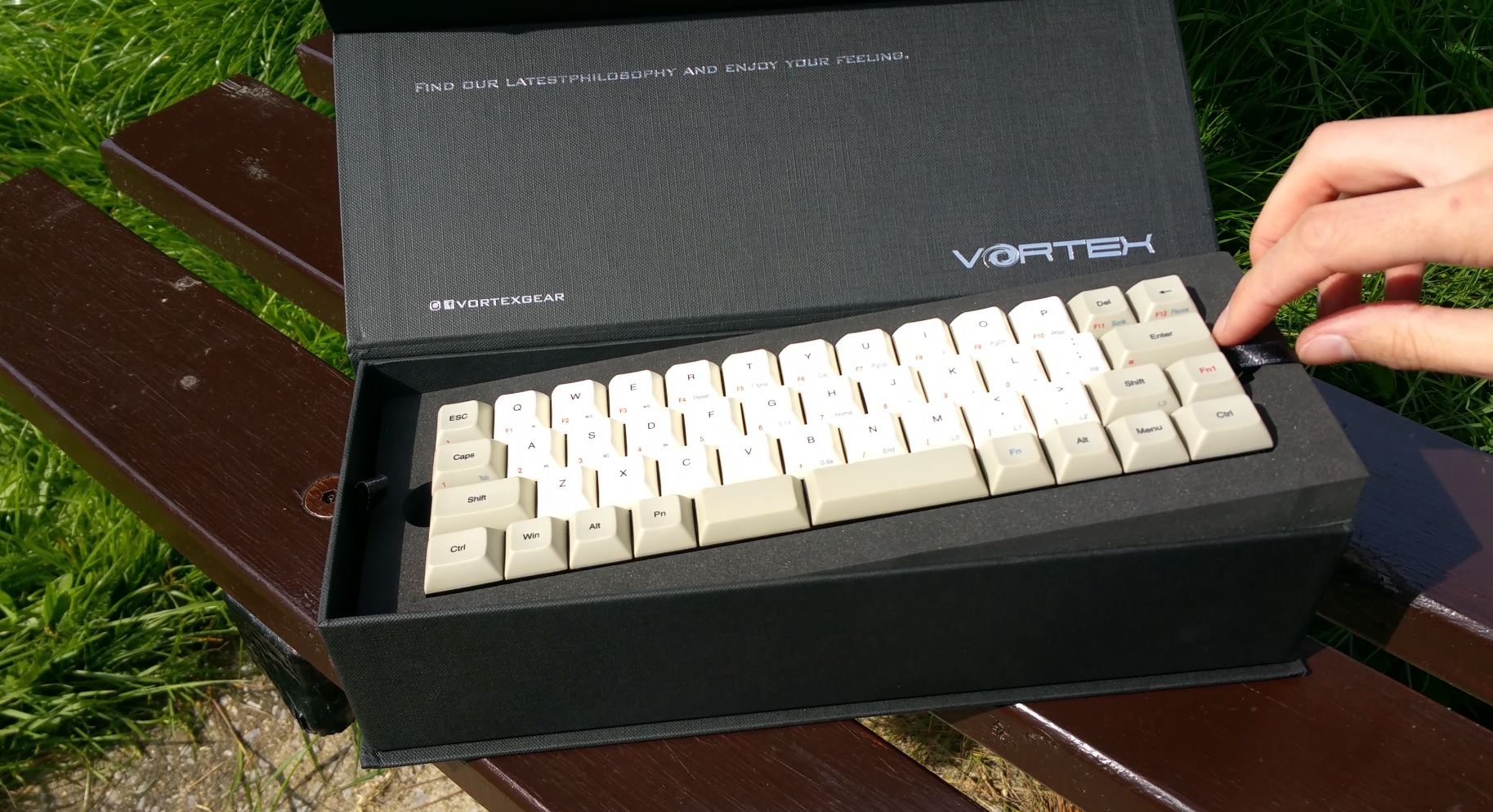 And underneath we have an instruction manual and a USB cable.
Take a good look at the manual by the way, you will really need alter on. Here is a PDF copy of it. 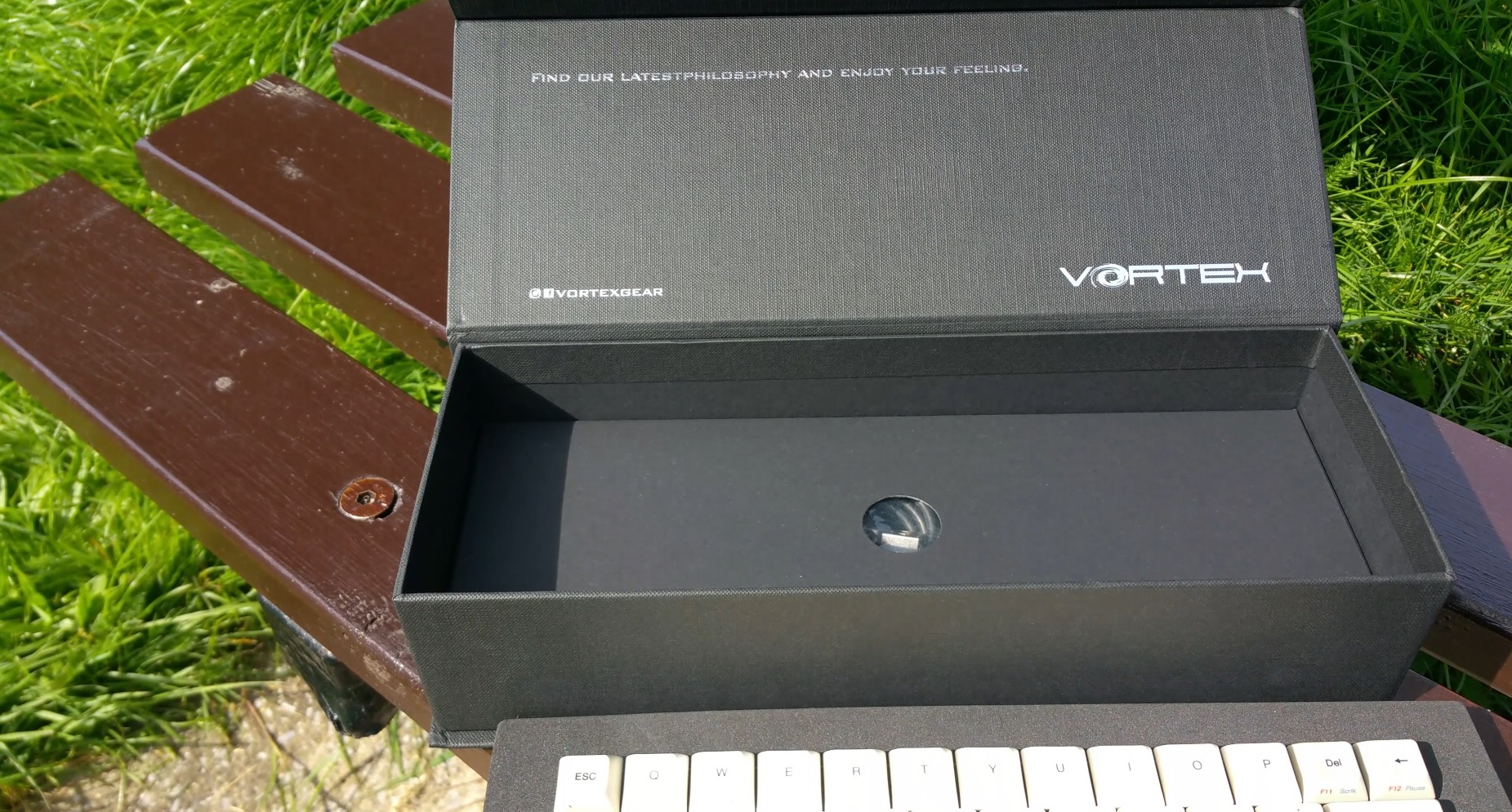 Kudos to Vortexgear for this beautiful unboxing experience !

And here it is. This is how a 40% mechanical keyboard looks like. Notice the red and blue ad-notations on the some of the keys. We will explain everything later in the review. 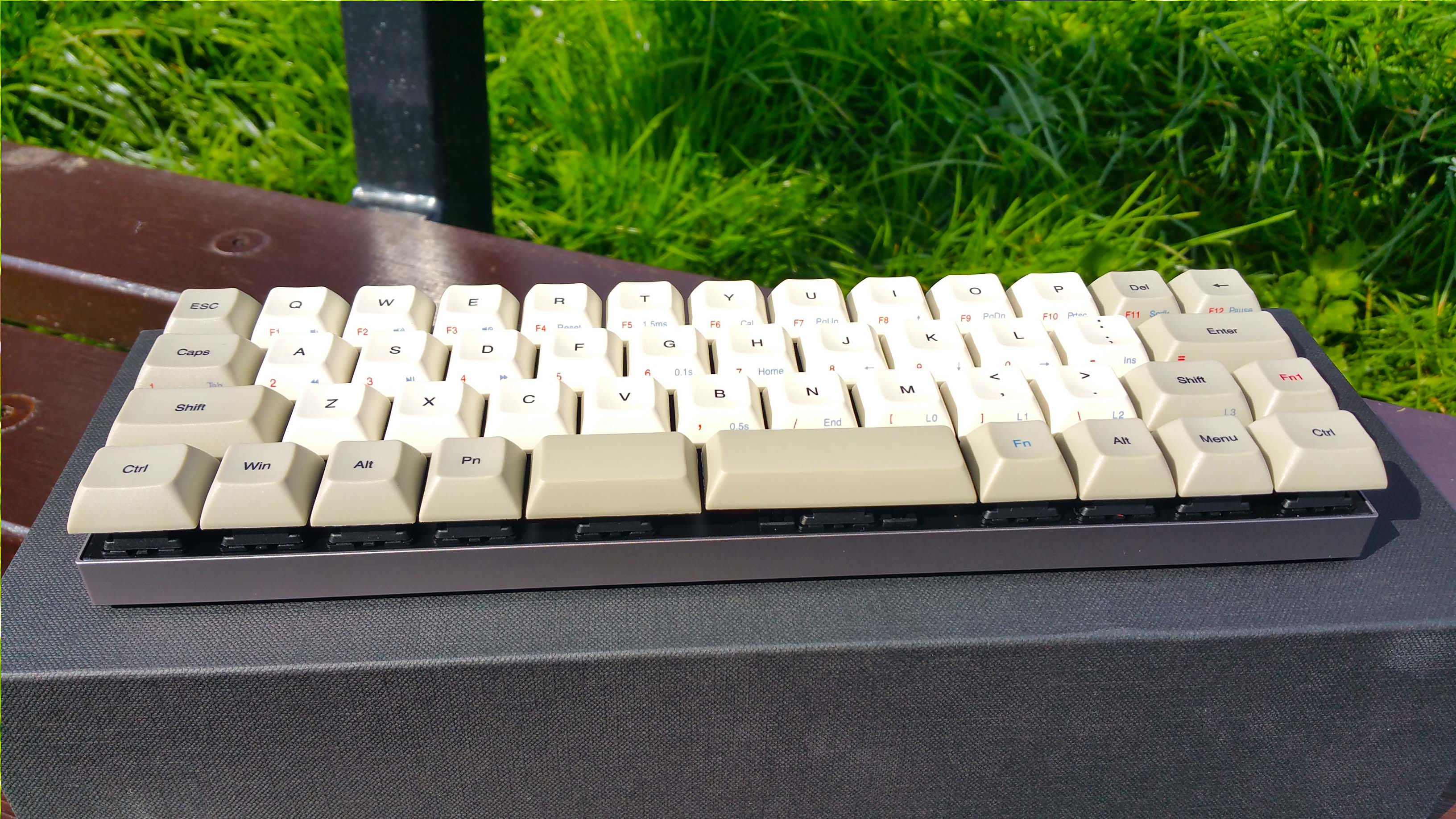 On the back we notice the CNC anodized aluminum case construction which oozes quality. 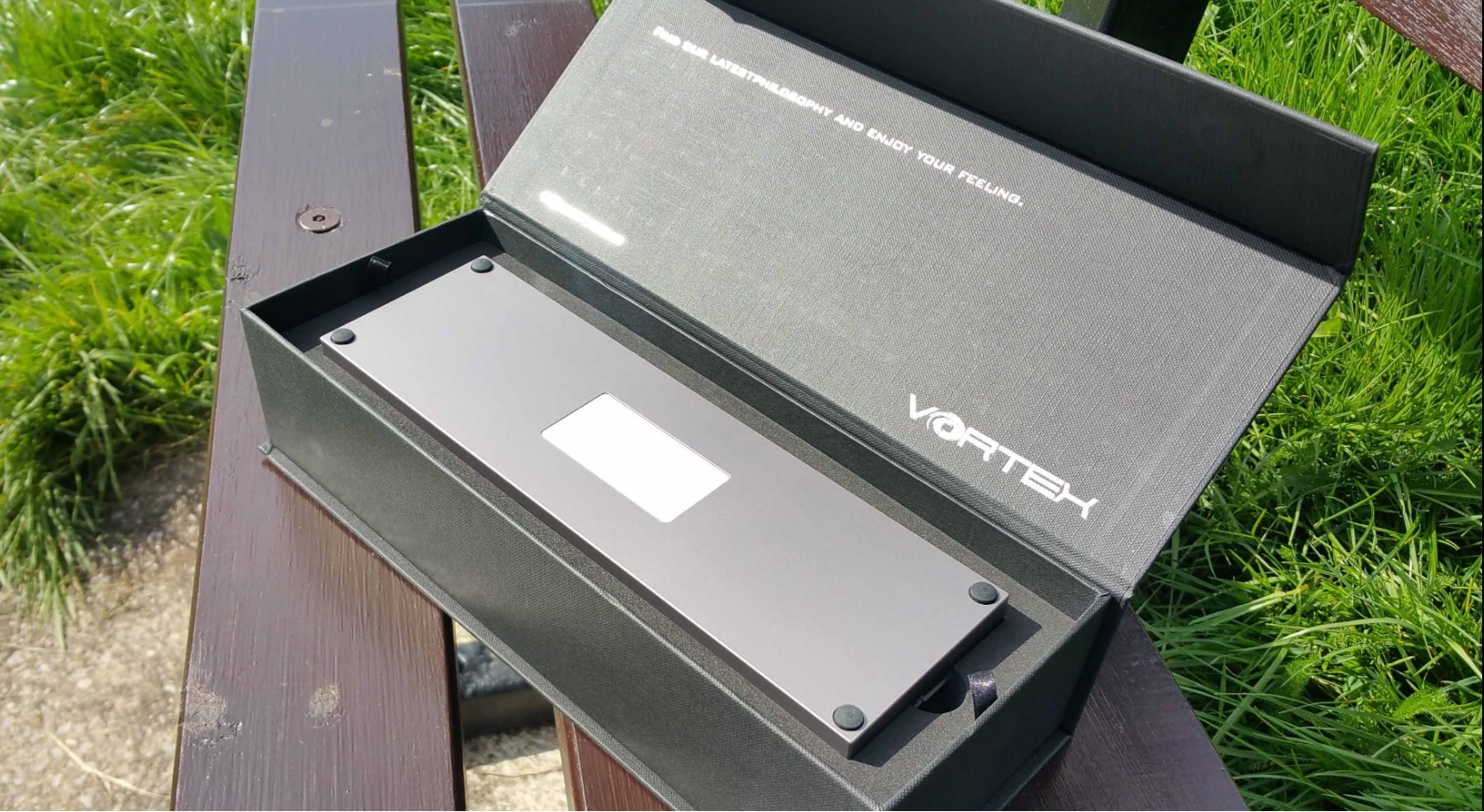 Zooming first in the center, this is the tag. Also from aluminium and with important information engraved, such as: the company logo, brand, model, S/N and where it is manufactured. 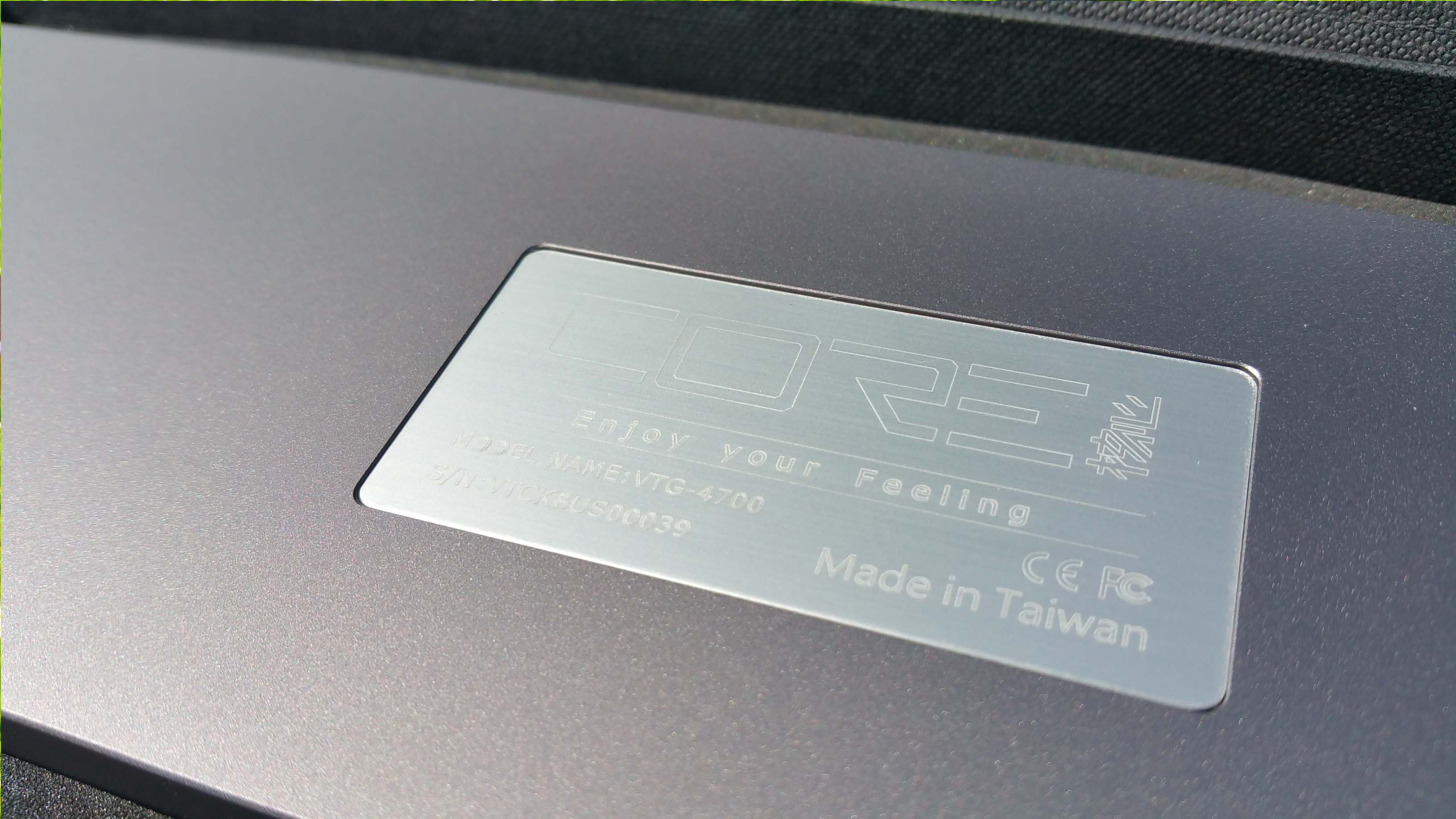 Then the fixed four anti slip pads for each corner thus no angle adjustment is present. 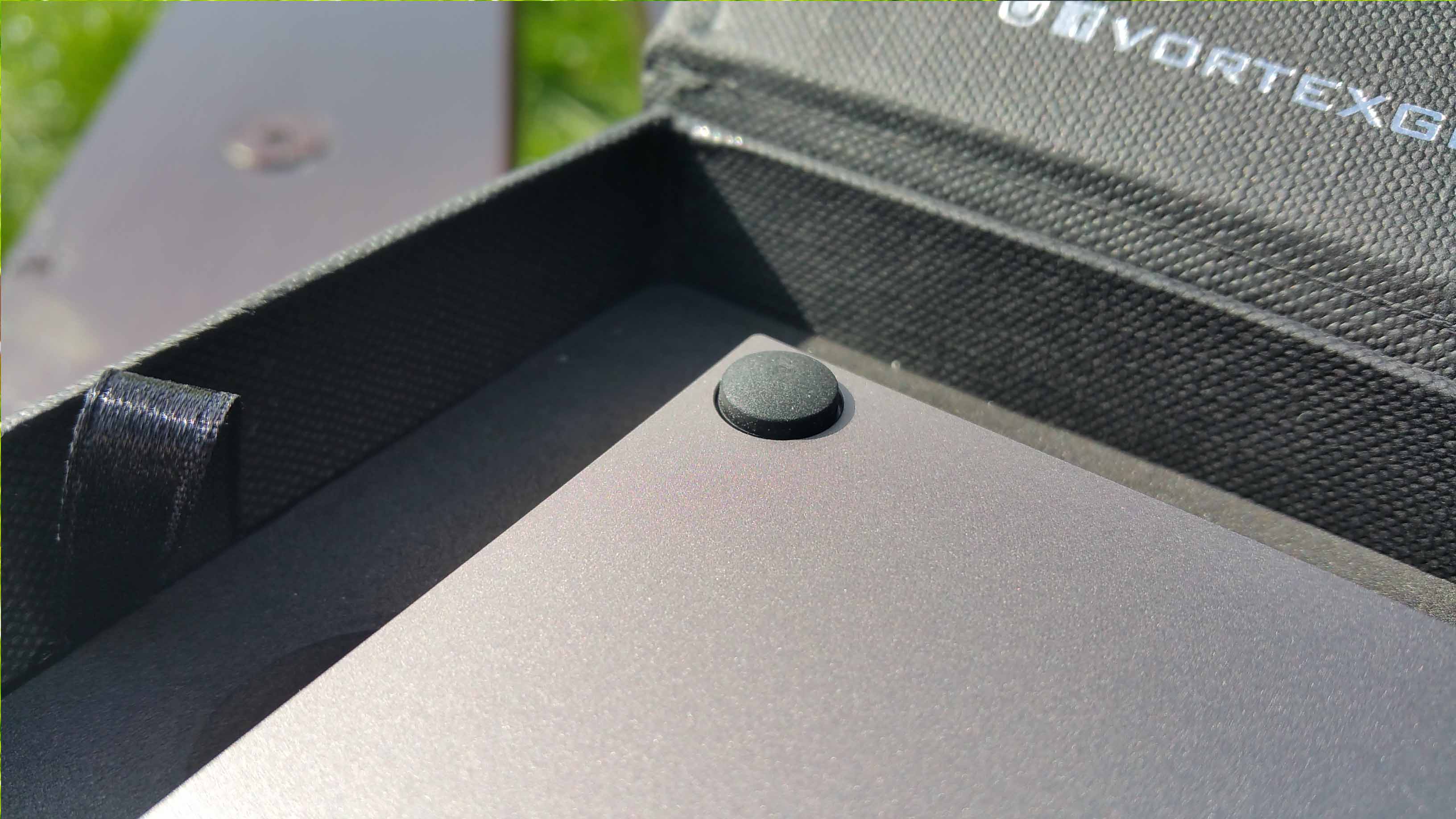 And finally the switches – our model carries the Cherry MX Blacks. 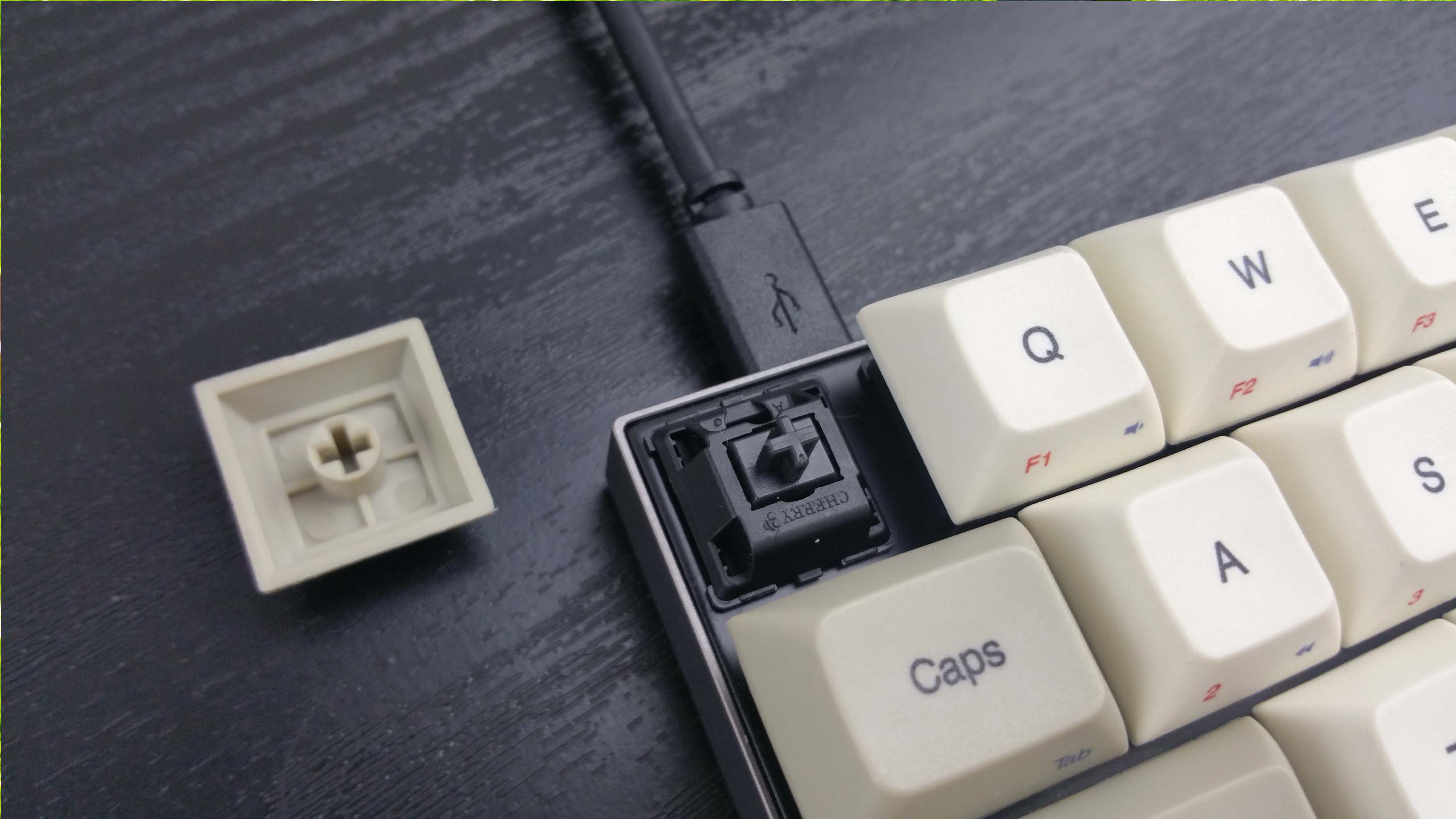 These are the MX Black switches which were introduced in 1984, making them one of the older Cherry switches. They have a medium to high actuation force, which means they are the stiffest of the four most common Cherry switches. These switches are used in point-of-sale stations, but typically aren’t considered ideal for typing due to their high weighting. The stronger spring also means that they rebound faster, meaning they can be actuated quite quickly given enough force – although you may also find fatigue becomes more of a factor than with other switches. 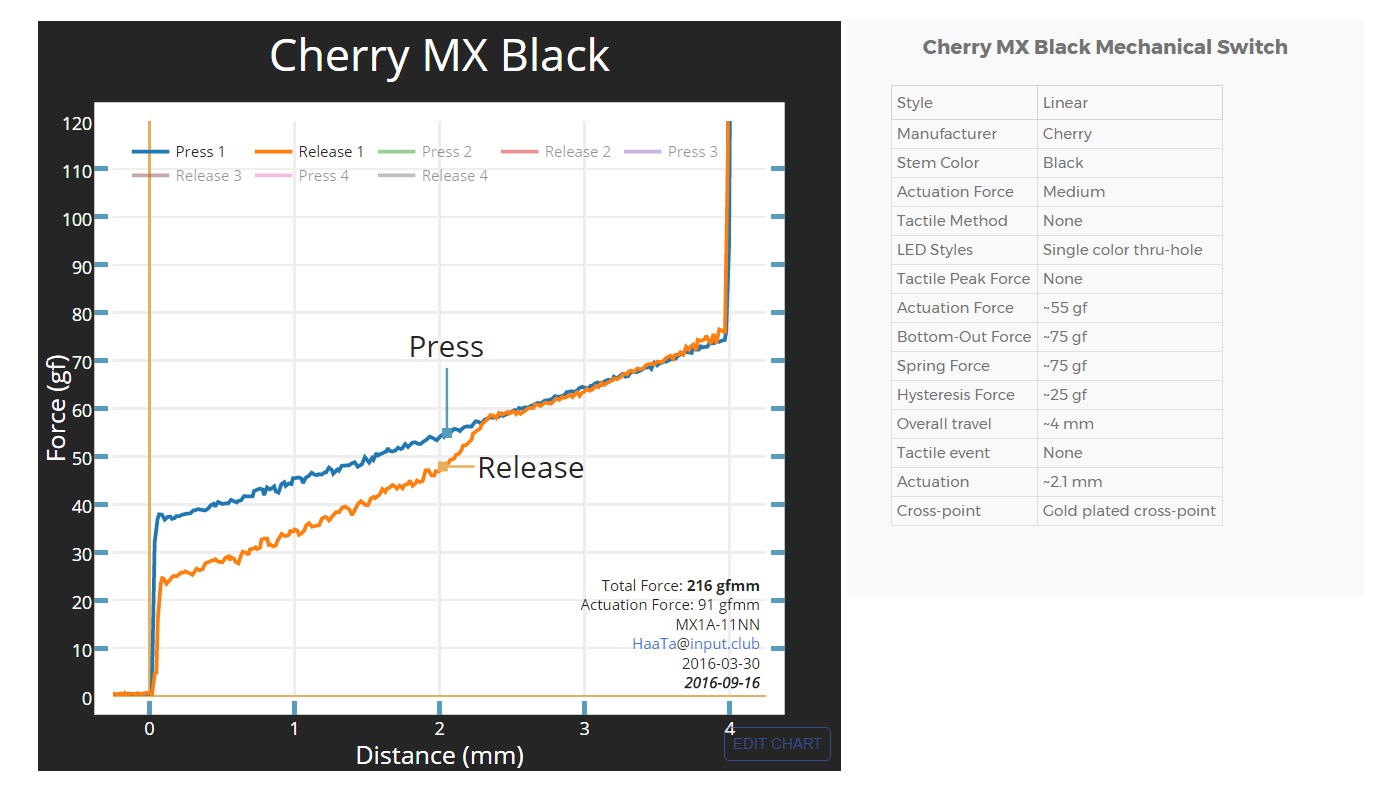 They are also characterized by their smooth, linear press from top to bottom and will have a very consistent feel as you press it, changing only as the internal spring compresses. They don’t have a tactile “bump” which indicates a key press has been registered before the key reaches the bottom of the switch. The switches register their press in the middle, while the “release” point (where the key starts to come back up) is at the bottom. The “actuation point” (where a press is registered) is further up. 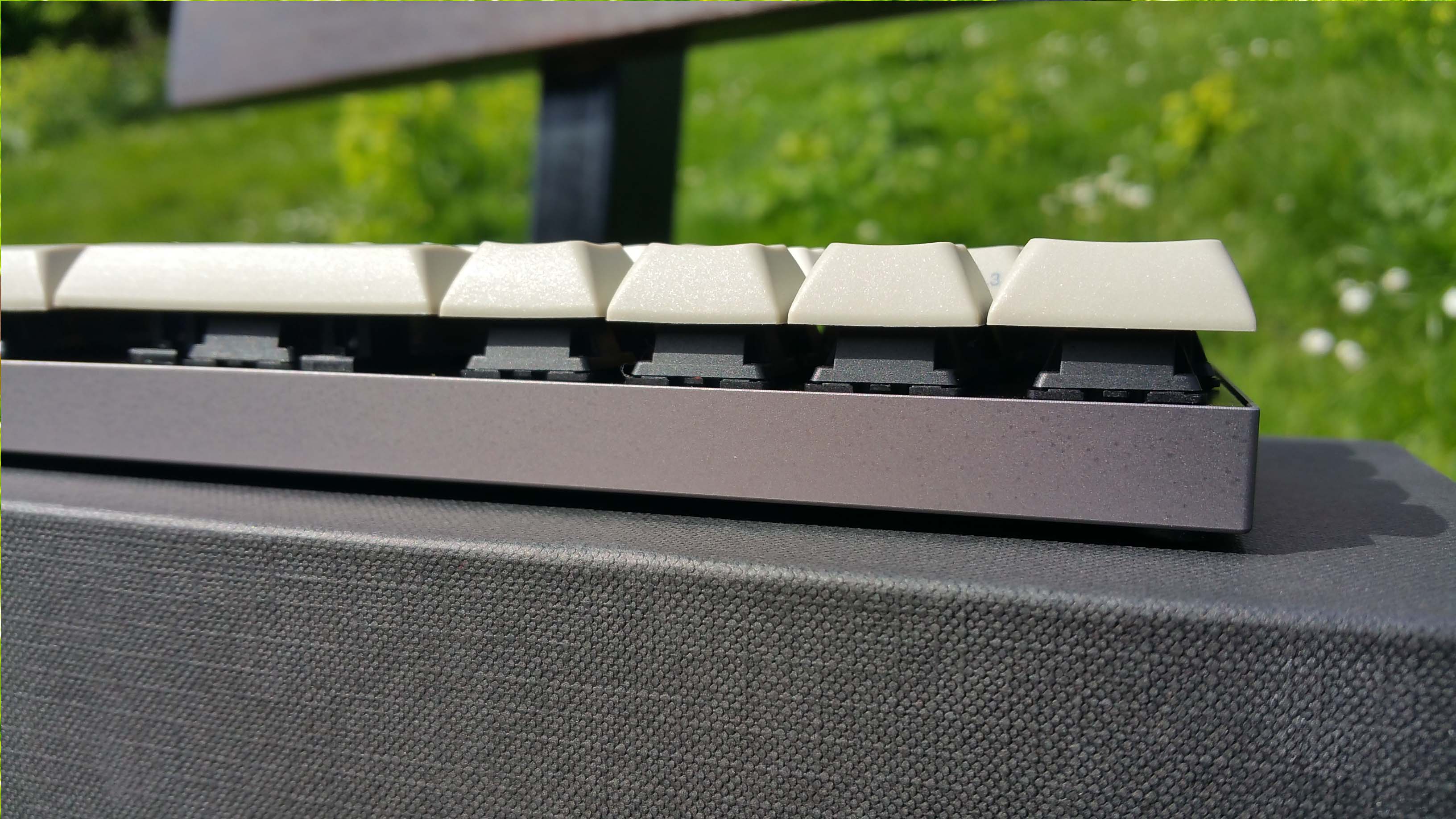 Because this is a keyboard with the PCB in a case vs others which have a top and bottom panel, this means that all keycaps are floating by design. Speaking of, the keycaps we know that they are Dye-Sublimated PBT with a DSA Profile. 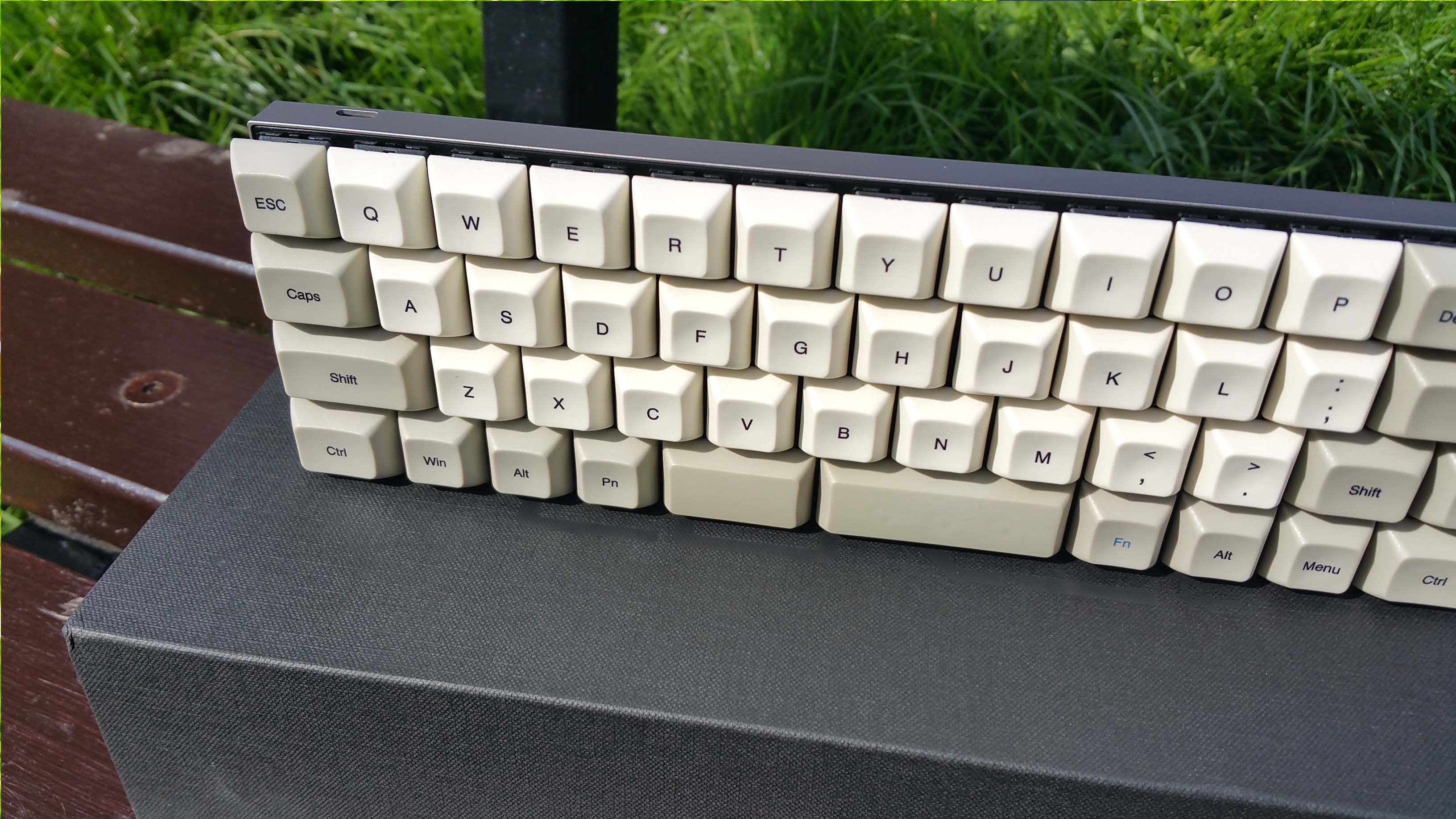 Dye-sublimated is the lettering printing method used which means a permanent method so no letter/symbol cannot wear or fade away over time.

PBT is the plastic used which it is more durable and has a slightly rougher texture. And the DSA Profile is the shape of the keycaps. They are spherical, shallow, and spaced out evenly with a bit more space in-between each keycap.

So far Vortex has ticked all the boxes of top tier quality.

At first glance you are inclined to thing, how on Earth this thing has all the functionally of a complete keyboard but being to tiny? The secret lies in ingenious layering and software free programming. 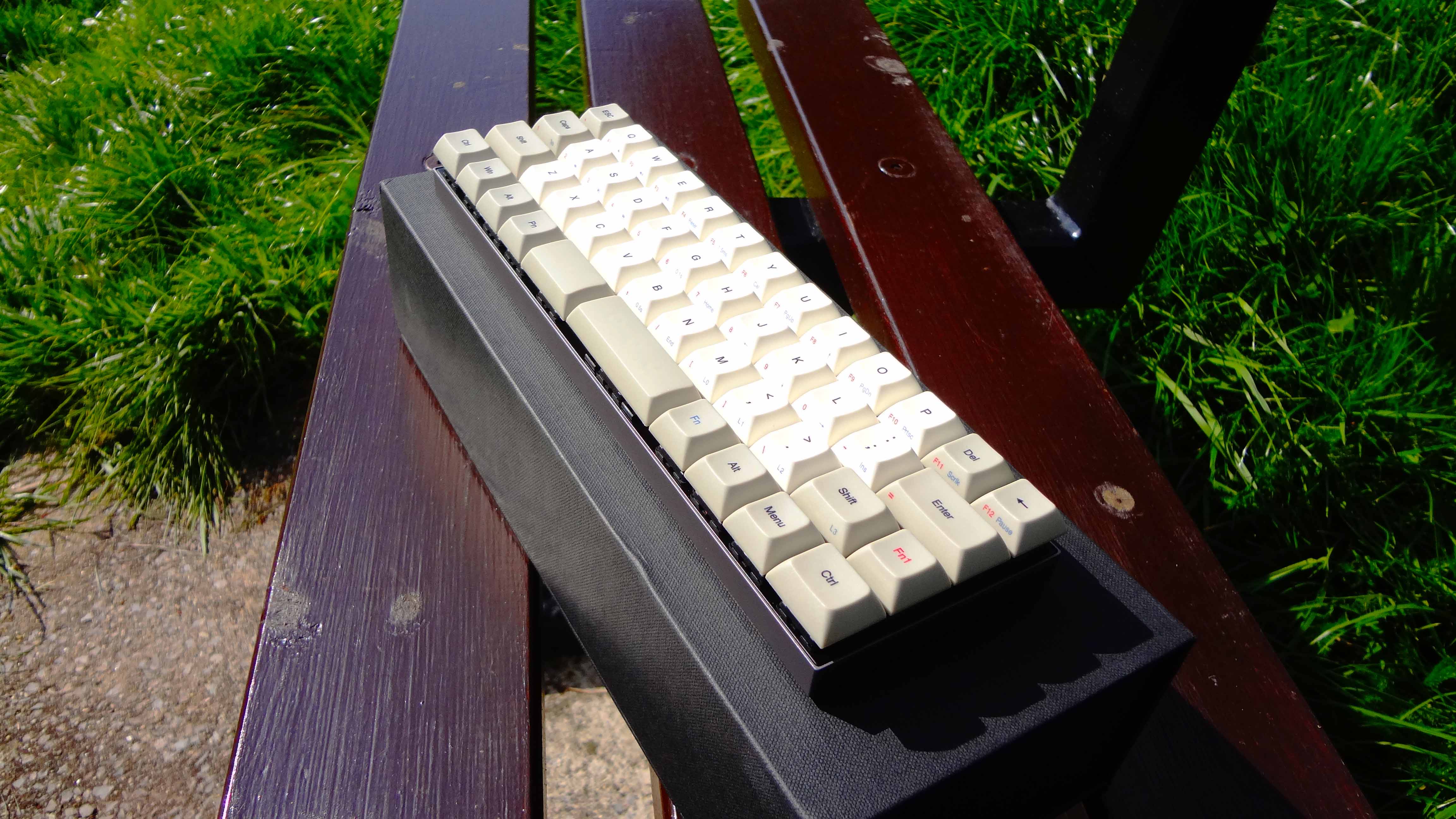 First we count a split spacebar and 4 layers, 3 of which can be programmed and a total up to 47 keys.

To help us even better let’s take a look at the included manual as well.

There are 2 function layers, which are separate from the 3 programmable layers. One of them has numbers and F1-F12, while the other includes the arrow keys, media control, volume, calculator, program layer selection, and Home, End, Page Up, Page Down.

There’s also a third function layer, but it only includes your symbols and special characters. You get to it by pressing shift + Fn1 red text.

Regarding lighting, you only get with this model some notification LEDs as follows:

– 2x White for the CAPS notification is on and another confirm that you are deleting an existing modified layer
– 2x Red one under the left space bar to notify you that you are in the Layer 1 mode and one will activate when programming new keys, now under the right space bar
– 1x Green with the same placement, for Layer 2
– 2x Blue for Layer 3 selection and another also under the right space bar for indicating that you have successfully configured a new key 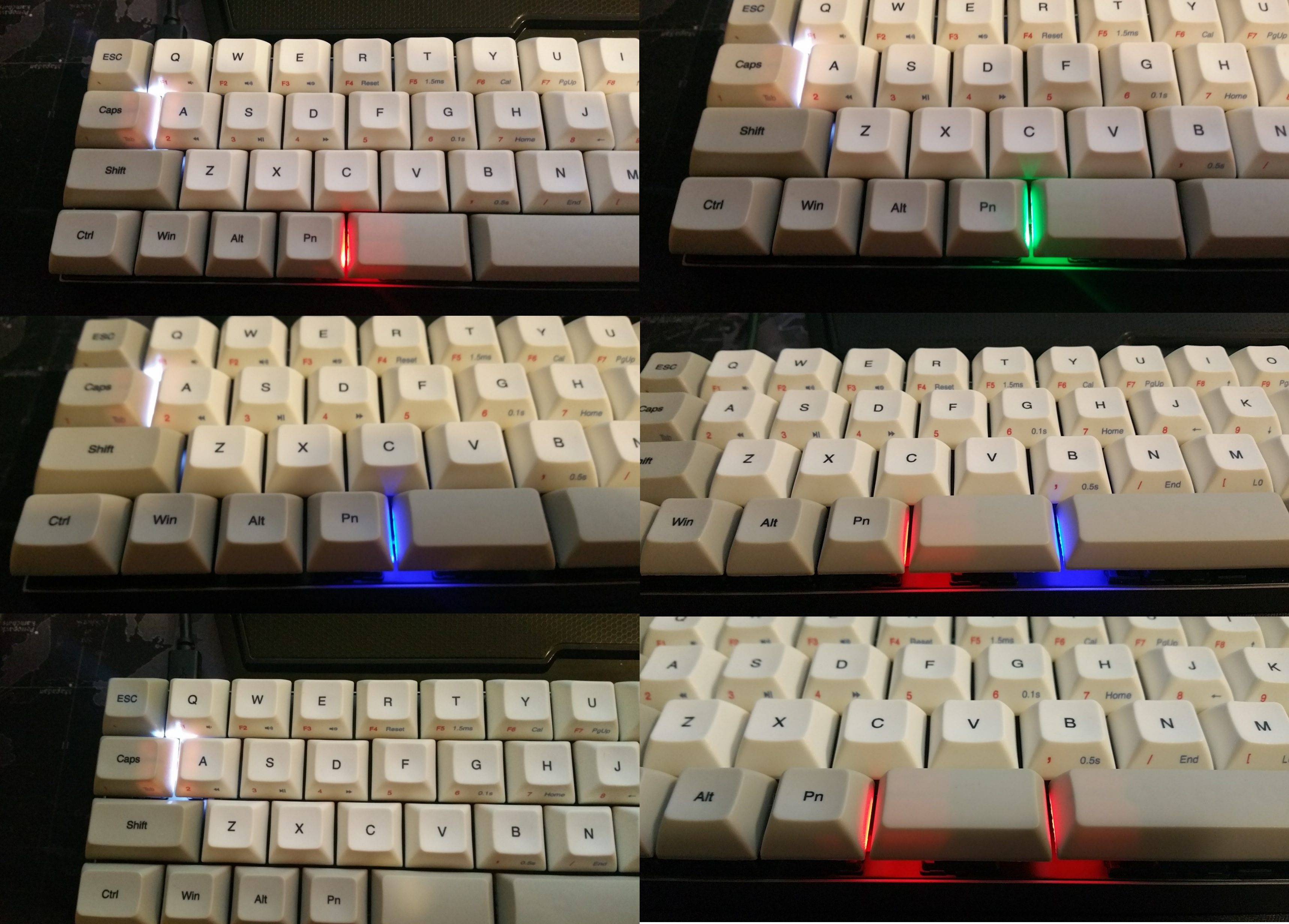 Ok, before we put it into action, here is a size comparison with a Sandberg 104 key gaming orientated keyboard. Words are pointless here as you can clearly see how tiny the Core is and it is mind-boggling that it has full functionally in this small footprint. 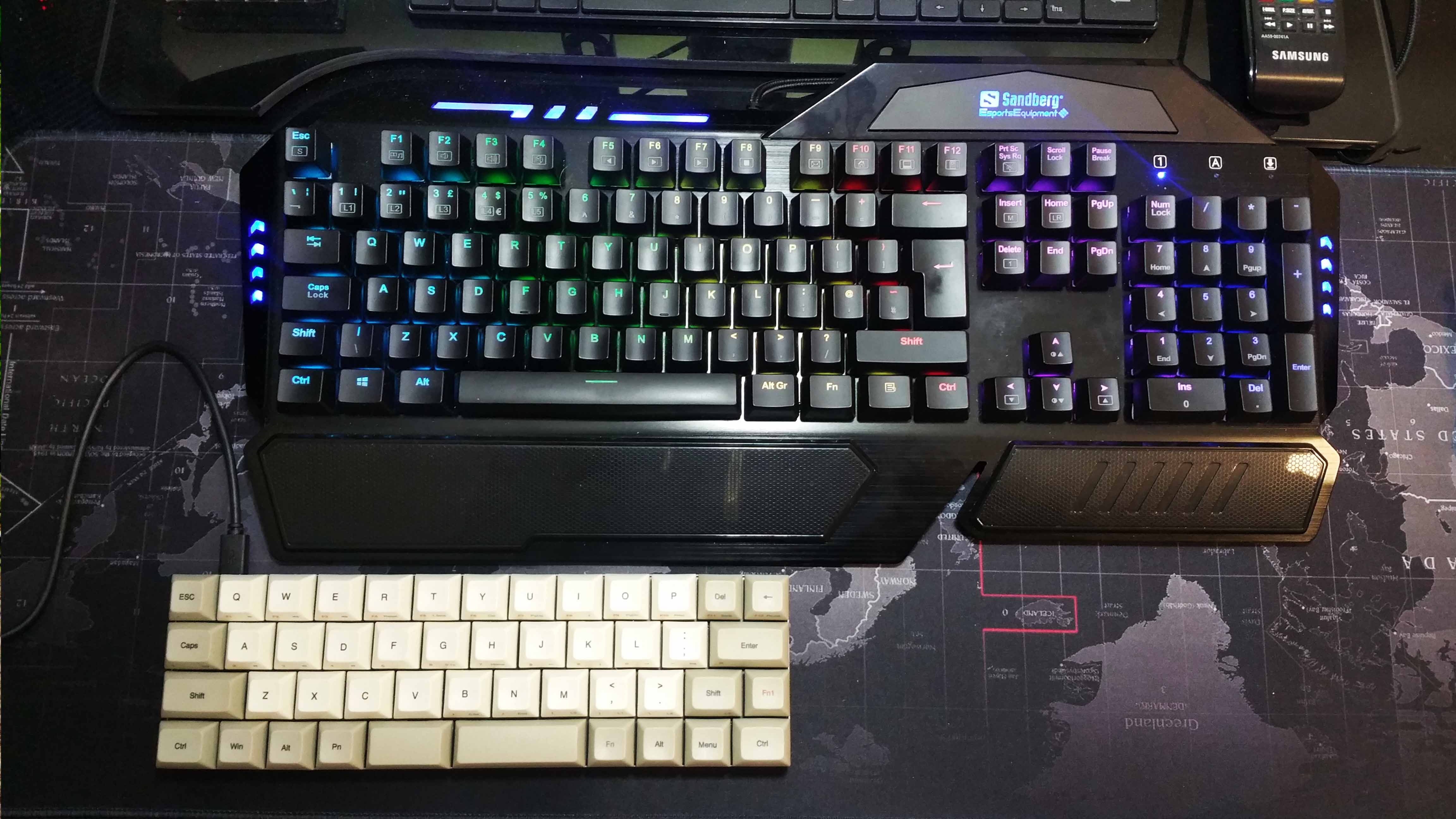 With products like this the best tests, besides the specific ones, is to implement them as daily drivers. So we did just that. We even wrote the reviews for itself, on it. It was tricky at first but we did it.

Another Kudos to Vortex because they wanted to avoided the usage of bundled proprietary software which usually is to buggy and annoying, they just made everything easier by giving you the option to choose through 4 layers, 3 of which are programmable.

To cycle through them you, these are the key combination and for every choice you will get a different light minus for the e first/standard layer.

Not for the actual programming. Let’s say you want to program layer L1.

The left space bar will have the red light under it as seen above, and the following are the steps for programming:

We found out that you cannot program individually the 2 space bars. Maybe an updated firmware in the future will add this.
Other stuff we discovered are:

1- Each key programming can have a maximum of 32 key strokes, thus you can set up interesting macros.

3- Press and hold Fn + R to erase any programming on the layer you are on – confirmation shown by the left space bar LED flashing white for 5 seconds.

4- Press and hold both Alt keys to erase any programming on the entire keyboard aside from L0. Same as above for the LED flashing.

Again, this can be intimidating at first, but as long as you start to use them and set everything up as needed, then it will be more manageable over time.

So after spending almost 2 weeks only with the Vortex Core 40% keyboard, I got more confident in it and my new piano finger movement skills, it become a very interesting yet enjoyable typing experience.

For typing, as previously stated, we did this review on it, as accustomed by now when we review peripherals – we integrate them as daily drivers for the most complete testing experience. We were skeptical at first but in the end the keyboard made sense and now we love it. The main keys are easy to reach and use, the key spacing is OK and no interference at all and we think the robustness is a nice match with the key feedback of the MX Cherrie Blacks.
Even better we think the Blues are another top choice.

As for gaming scenarios, give it’s layout we recommend it towards casual gamers on the go, since no time for extra layers switching and selection in time sensitive matters. Still, you can do it with a little bit of extra focus

We love niche products. Because this dogma can stimulate creativity and design which sometimes can and will to great and inspiring results. The Vortex Core 40% keyboard is just that – with no shadow of a doubt – one of the most interesting keyboards out there.

It is extremely well built with multiple layer programability for your needs – this is a product that takes minimalism to a whole new level. Of course being this small it had to sacrifice rows of normally standard keys, which will require a learning curve, but don’t be afraid because you will get the hang of it.

A lot of thanks to Vortexgear for supplying us with this sexy little thing !