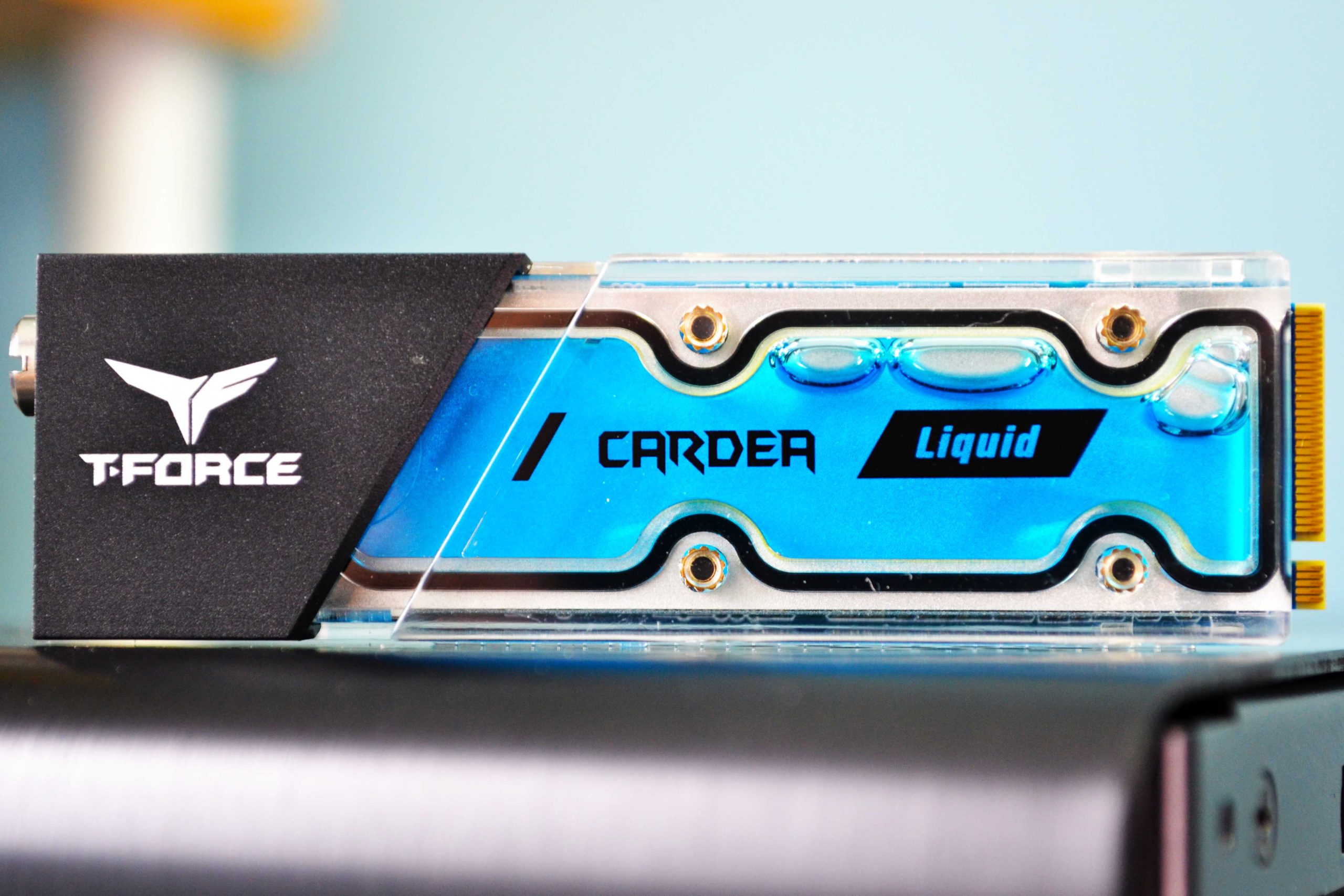 “Be water my friend” – Bruce Lee used to say. Well, Team Group did just that and has implemented a mini self contained water cooling system which consists of an aluminum plate designed to transfer heat into an acrylic chamber filled with liquid, for an M.2 drive, thus creating the world’s first water cooled NVMe drive.

I just love when companies take it to next level and this is such a great example. As you would expect this promises to keep the M.2 drive cool no matter what and I can’t wait to test it out since M.2 are getting so fast that they really need proper cooling.

If you just take into account the price-per-GB ratio, these will seam a bit overpriced but we need to fully consider the uniqueness of such products because as per the date of this review, there is nothing out there like this. The Cardea Liquid series comes in 3 capacity options but the 256 GB is missing from Amazon for now. Our test sample is the half a terabyte one. 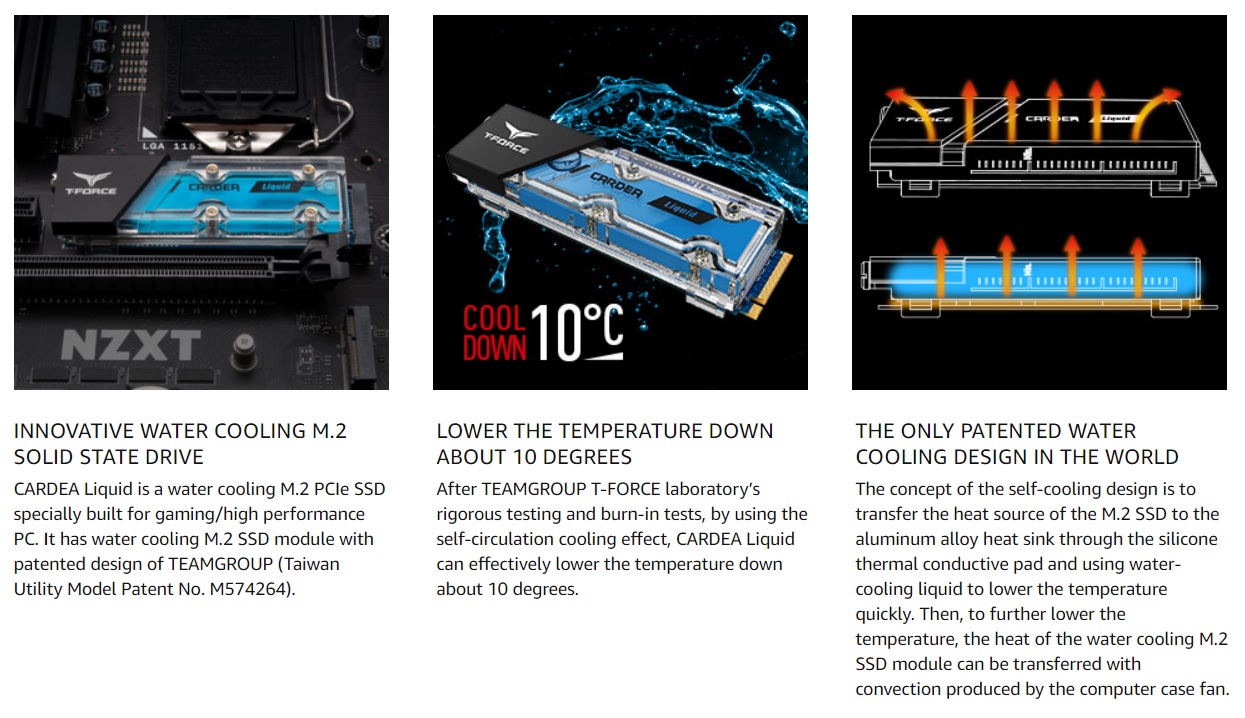 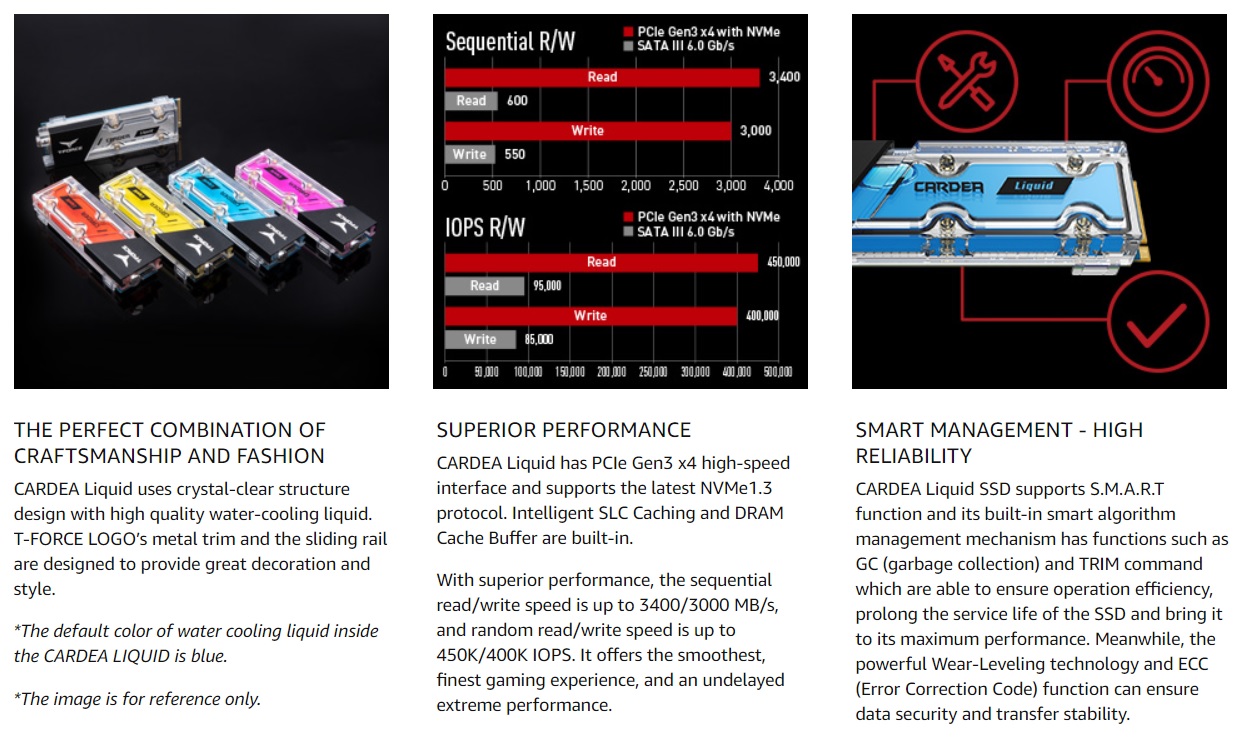 This NVMe SSD is really cool (no pun intended) and the cooling design is even patented. It comes by default with the coolant in blue and you can change this to anything you want. T-Force promises at least 10°C improvement over standard M.2 drives while offering read/write speeds up to 3,400/3,000 MB/s and IOPs up to 450K/400K on the 1TB model.

Spec wise, all three capacity models use the PCIe 3.0 4x interface and NVMe 1.3 protocol, the same Phison E12 controller, are built on BiCS TLC memory cells (thus making use of an SLC cache as per any TLC drive) and come with a 5 years warranty (1 year for the liquid heatsink).

It comes in a nicely branded all black packaging. The liquid cooled M.2 is present in the middle while the water theme is the main motto. A big sticker on the right shows the capacity and we are informed that it will cool at least 10 degrees Celsius better with this implementation. 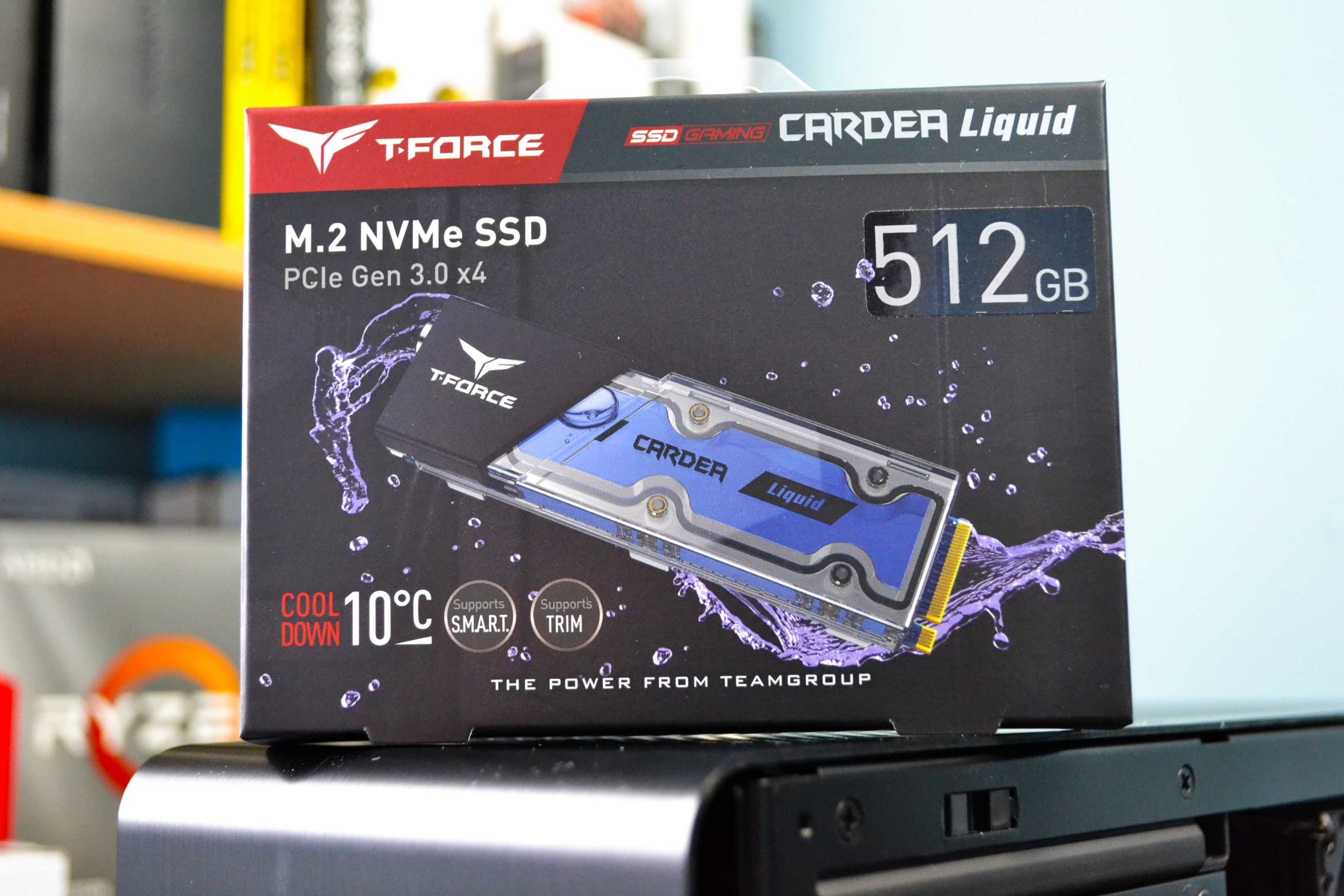 On the back we have a quick intro regarding the company, some performance numbers in a synthetic test and the main product codes. 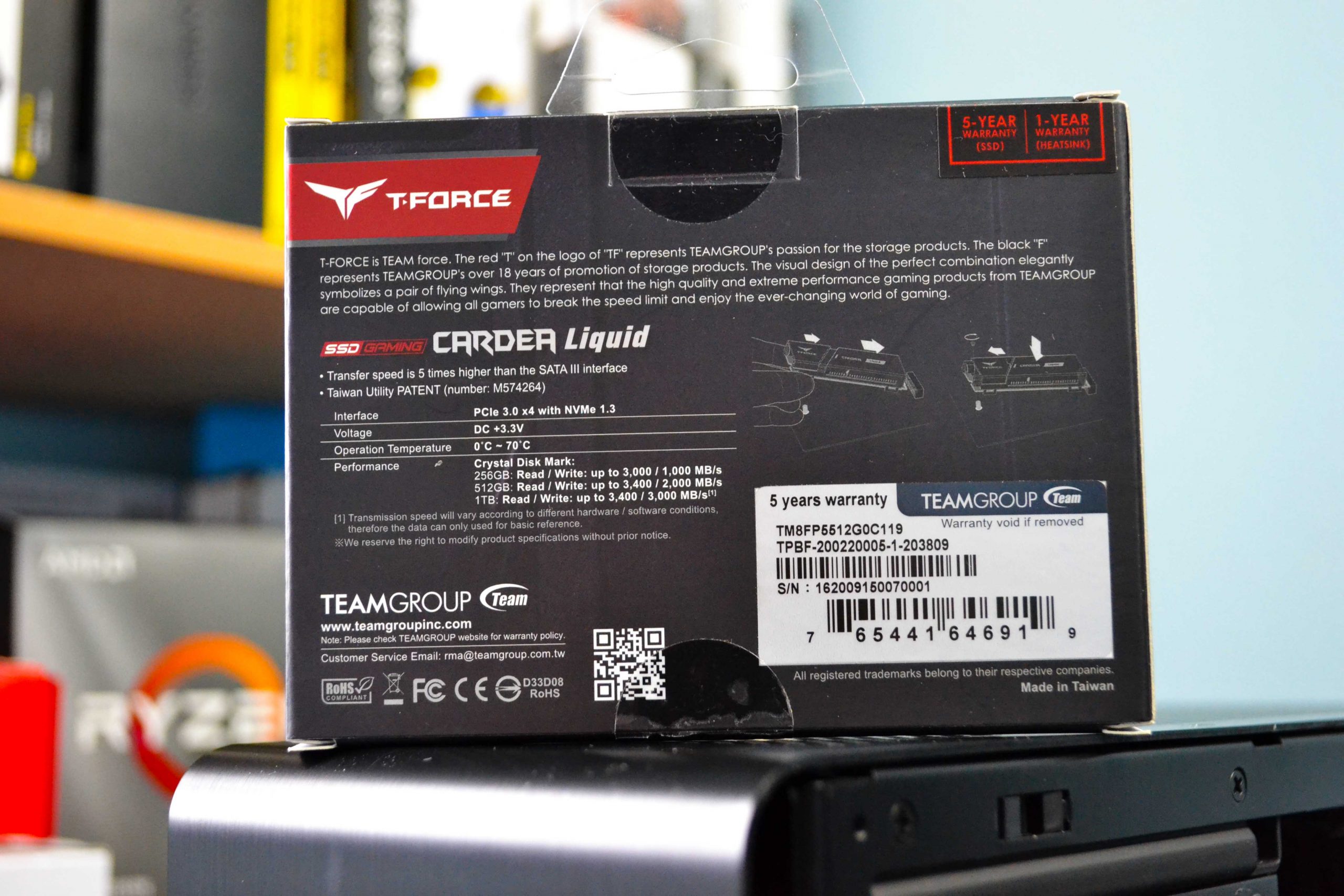 You get an instruction manual, the Cardea Liquid M.2 drive, a T-Force sticker and even a small refill bottle with a mini funnel. 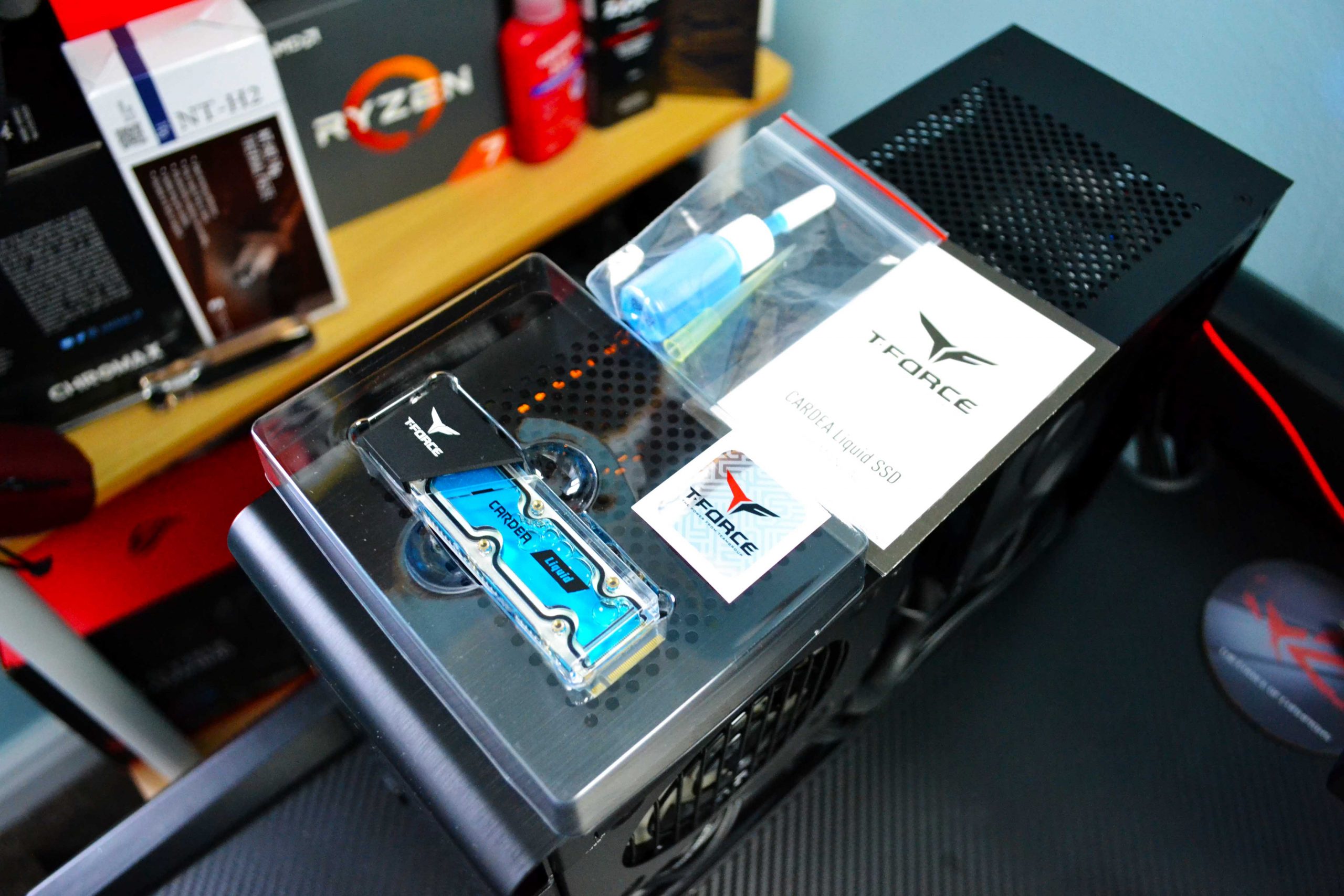 No other way to describe besides very cool ! The acrylic enclosure is fully transparent so you can see the coolant which as mentioned can be changed to any colour. The black plastic cover can be slide in and out in order to access the securing screw. 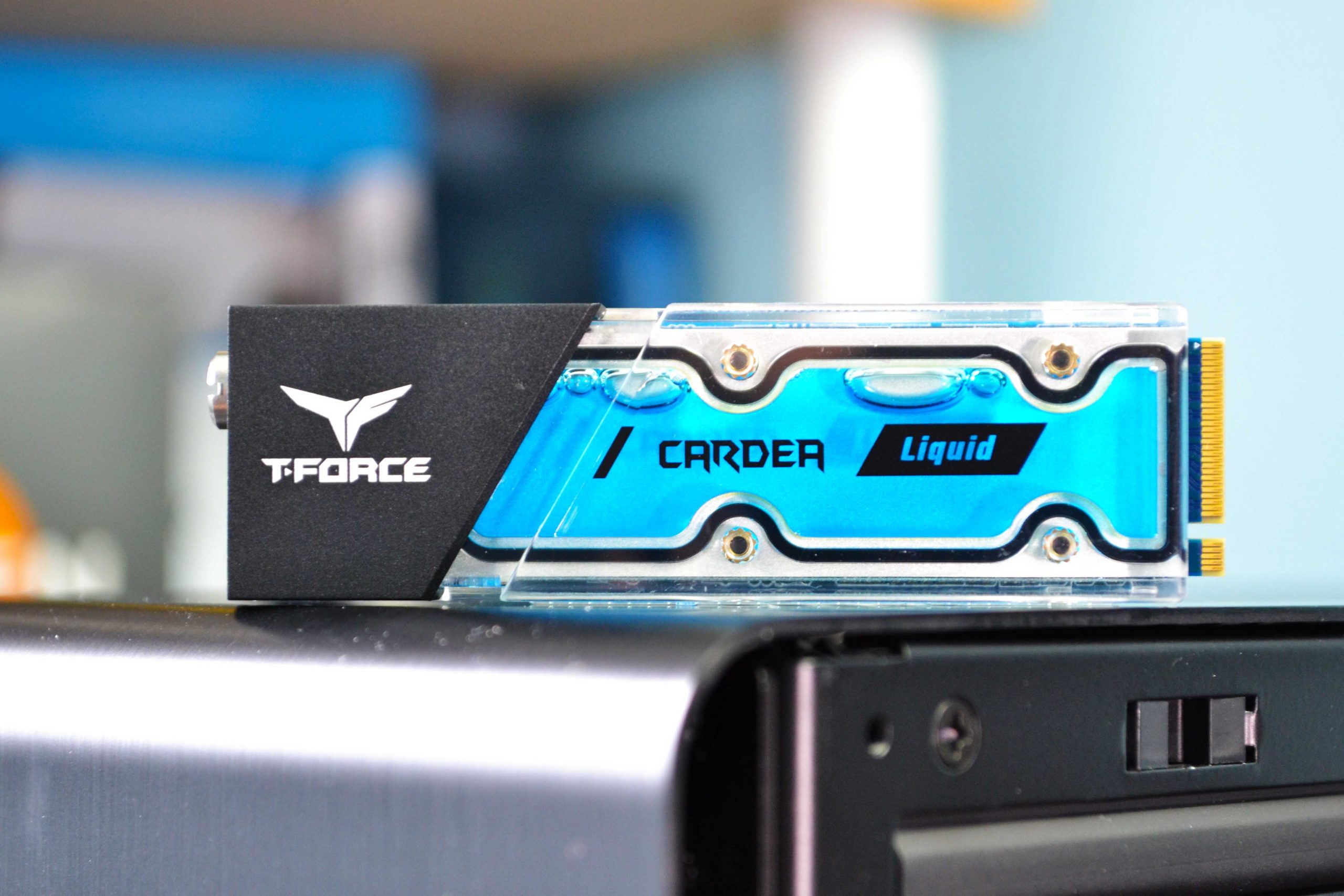 On the back we have the sticker with all of the main specs for the M.2 drive. 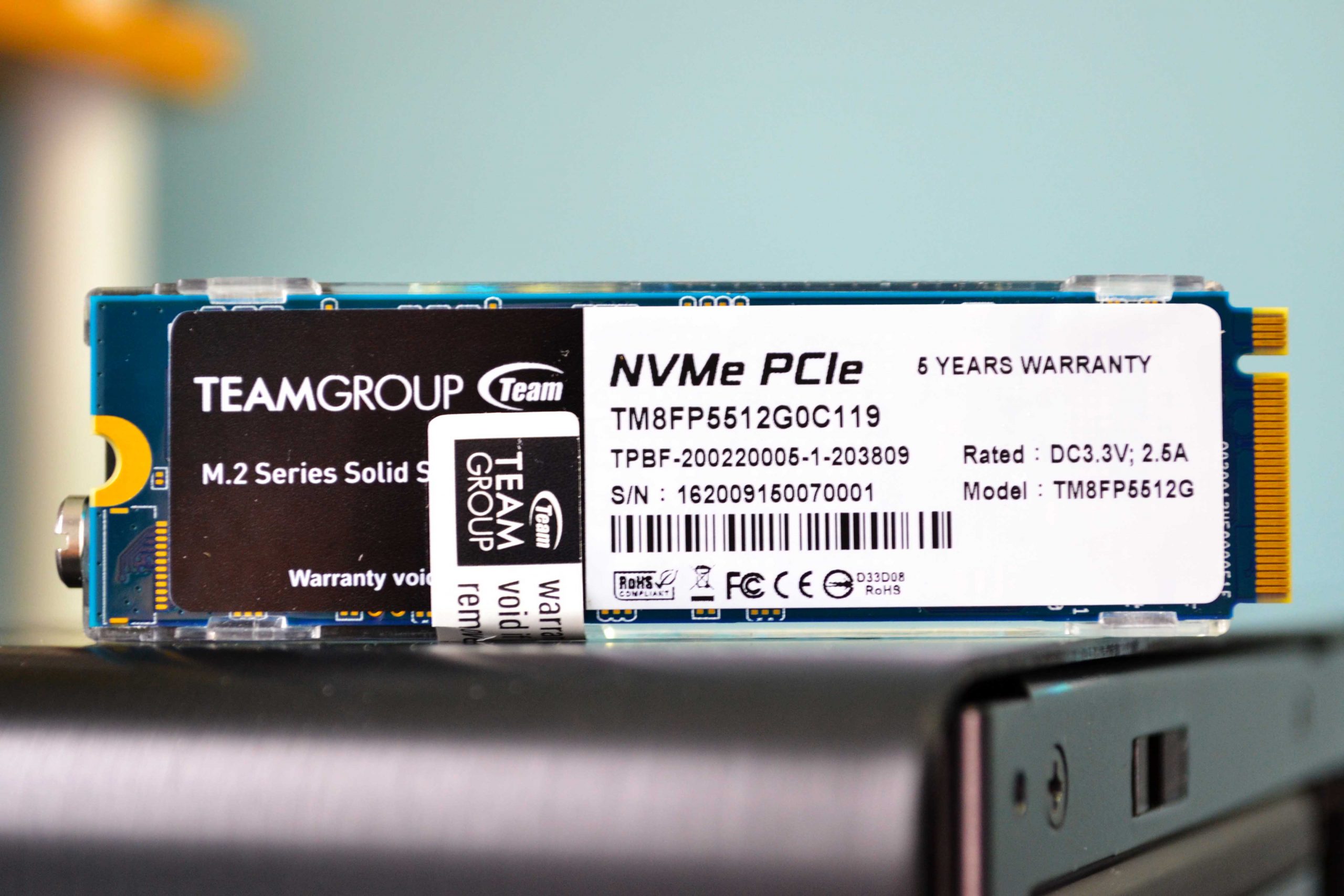 From this angle we see the fill port which requires a flat heat screwdriver to remove it. 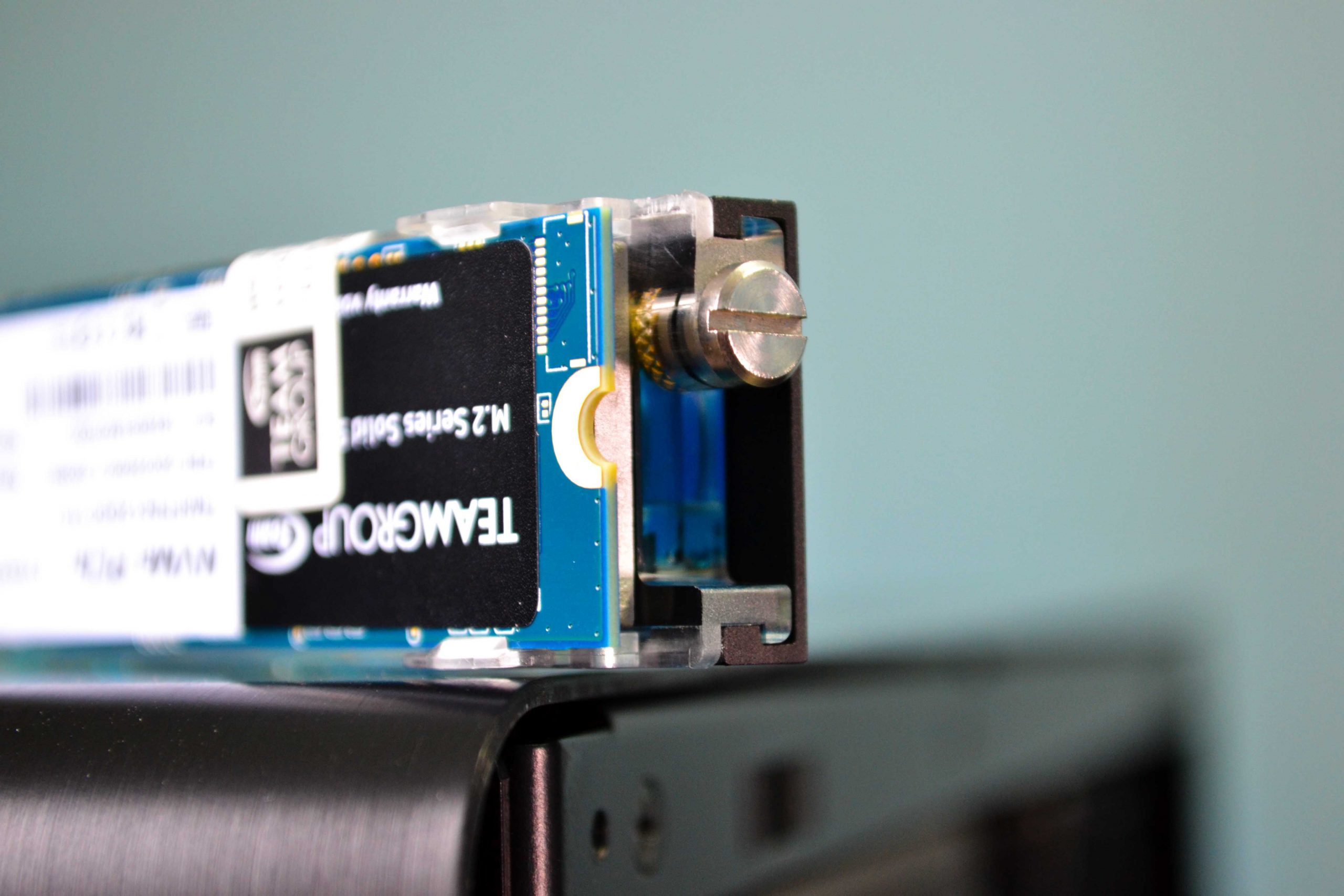 This front side view reveals how thick the acrylic chamber and the mini waterblock are.

Finally another great detail is the presence of a fill gauge on the side.

This is how you access to securing screw when installing it onto the motherboard – just slide the plastic cover.

* Synthetic and real life big file transfer tests – a game folder of 67 GB of mixed files
* All test subjects have identical content – at around 5-10% used space
* All SSDs were secure-erased before our tests started
* Between tests, drives are left idle for 1 minute to allow them to flush and reorganise their internal data.
* Steps have been taken to ensure that the CPU’s power-saving features don’t interfere with any of our results. All of the CPU’s low-power states have been disabled.
* In order to minimise random variation, each of the real-life performance tests are run a few times with reboots in-between tests to reduce the impact of disk cache.
* (SATA SSDs only) Make sure you use a SATA 6Gbps capable motherboard and a matching cable to avoid bottle-necking. Then double check in the BIOS that you have the AHCI mode activated for another maximum performance tip. 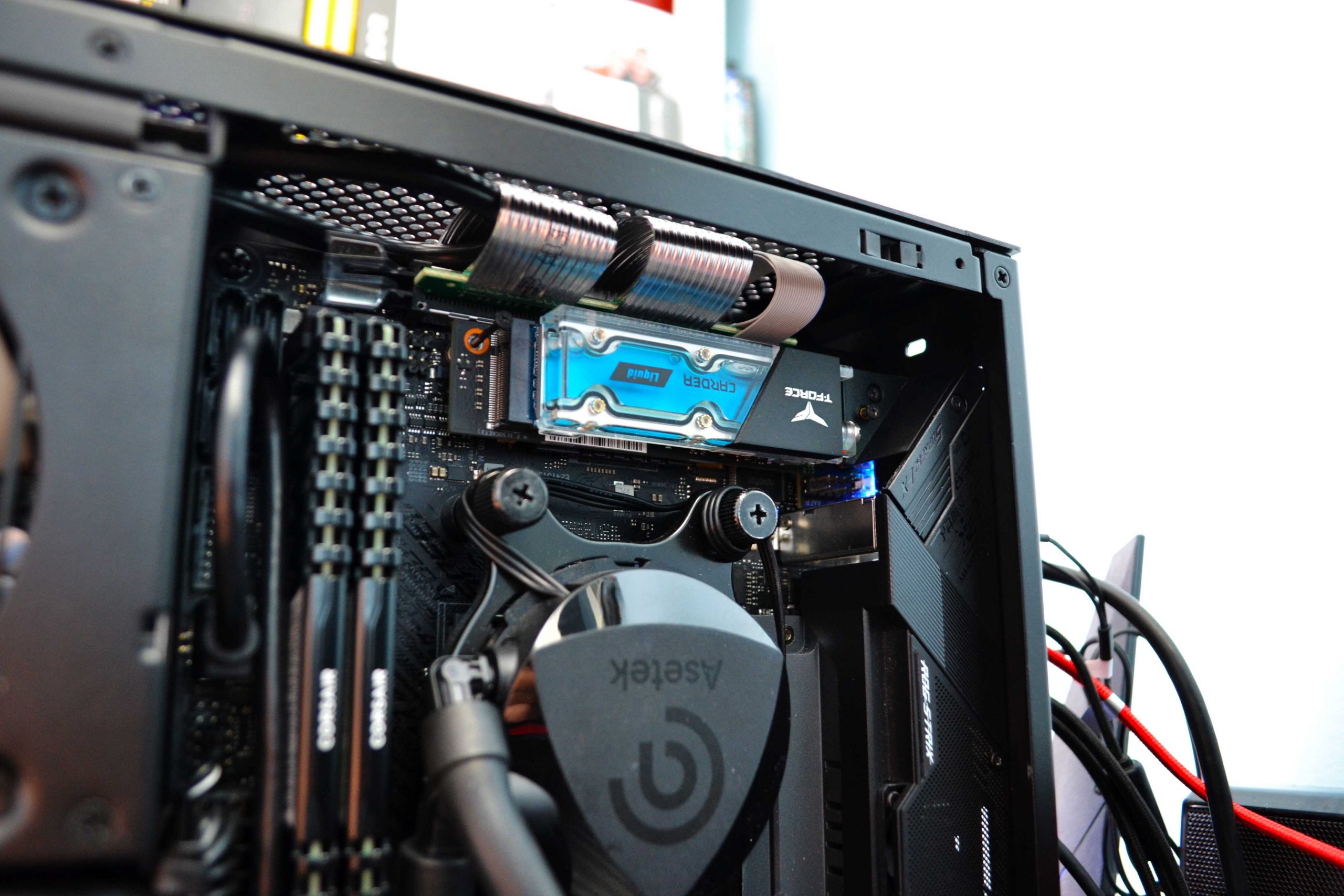 One very important detail to mention with this specific motherboard (ASUS B550i STRIX) is the fact that the fill plug from the M.2 Cardea hits the main I/O plastic shroud. So, you have two options: either remove the shroud or cut out a small gap (like I did) since it’s just plastic. I will do a video review as well and will present this in more detail. Also it goes without saying that the stock M.2 heatsink from the motherboard will not fit anymore since the liquid cooler is so tall. 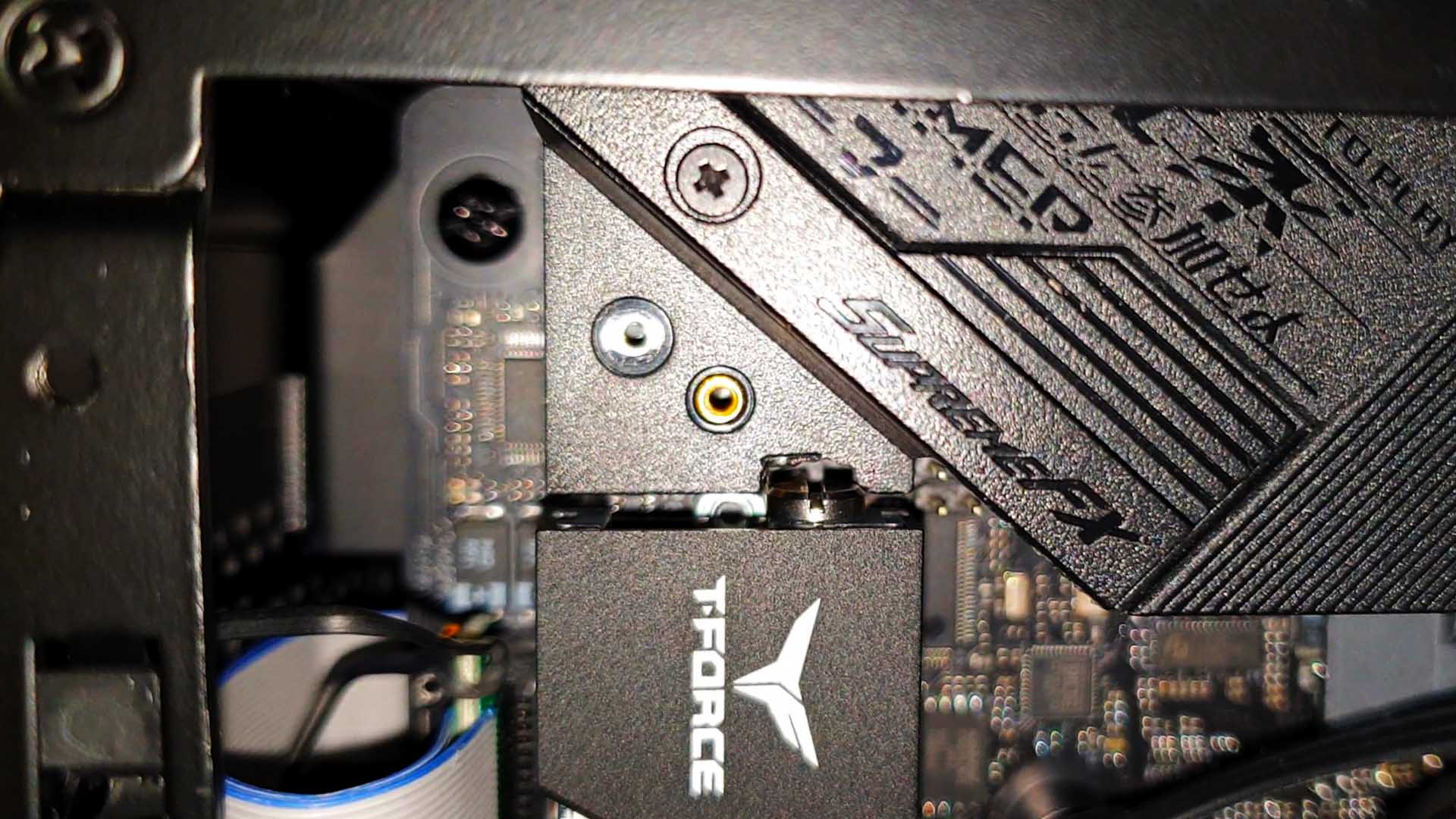 First, we start with HD Tune Pro – which is a hard disk / SSD utility with many functions. It can be used to measure the drive’s performance, scan for errors, check the health status (S.M.A.R.T.), securely erase all data and much more. Here the T-Force Cardea Liquid manages to beat the Crucial P2 for the same capacity and flash cells used and I am confident if we had the 1 TB model, that one would have beaten the P1 as well. 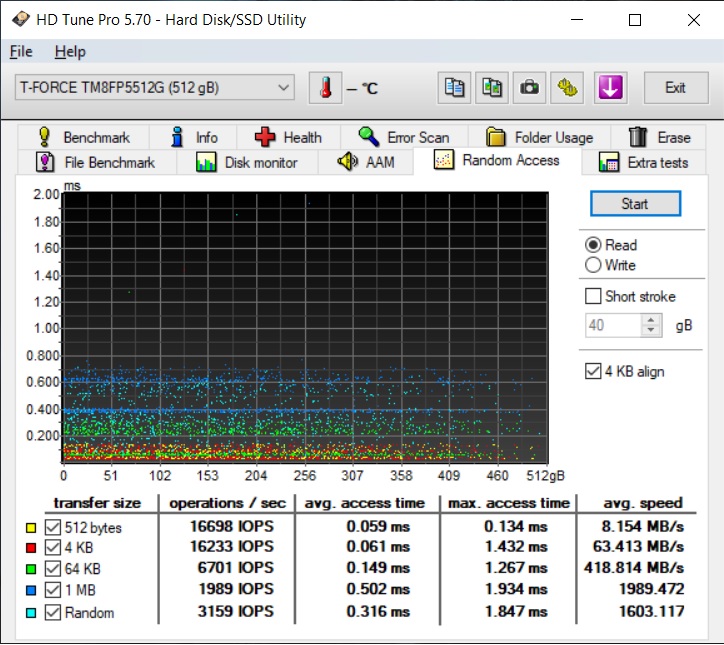 Moving to the next utility – Crystal Disk Mark – this one is designed to quickly test the performance of your drives. This time the T-Force M.2 Liquid beats all the Crucial drives and earns its 2nd place. 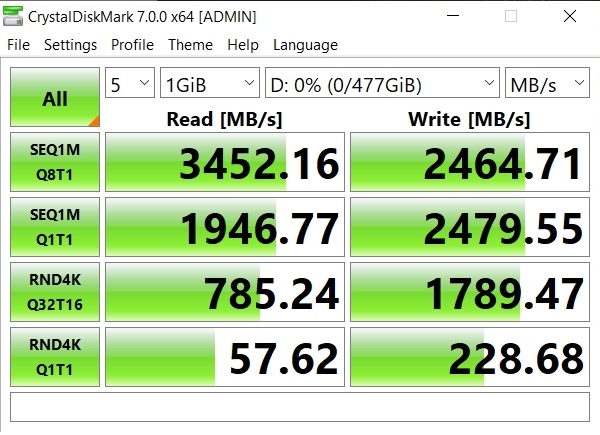 Moving to the “write” test, which is even more important in real life scenarios, we get the same results and thus the same hierarchy. The hierarchy is also preserved in this test as seen in the read benchmark. 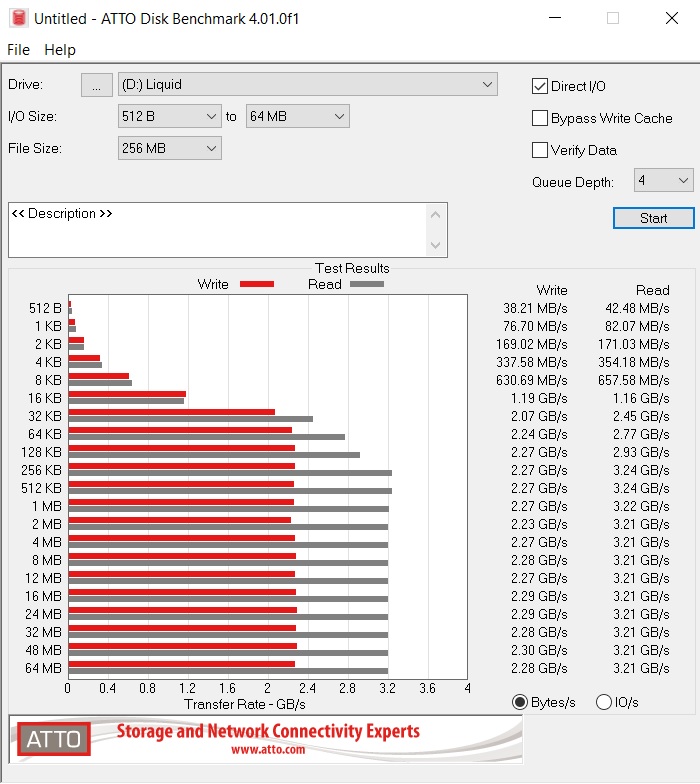 Our final performance test is to import a 5GB 4K60fps 70Mbps .mkv video sample file into Premier Pro CC and measure how much time it takes to process it in order to be ready to edit it in the timeline.

Now for temperature numbers we are all waiting for. Well, it works perfectly ! The best test for this is a big file transfer of 67GB mixed files which will be copied onto the SSD.

First of all it performs excellent maintaining 1 GB/s write speed up until the SLC cache get filled (which I can’t find the exact capacity for this, but if you time the video, it happens after ~ 25 GB written).

As for the temperatures, even in a hot ITX case like the DAN A4 SFX, with no airflow on the motherboard, it didn’t surpass 57 degrees C ! Just look at the Crucial P2 (that has no heatsink nor airflow) where the data was only been read from it onto the Cardea and it was over 70 degrees C. 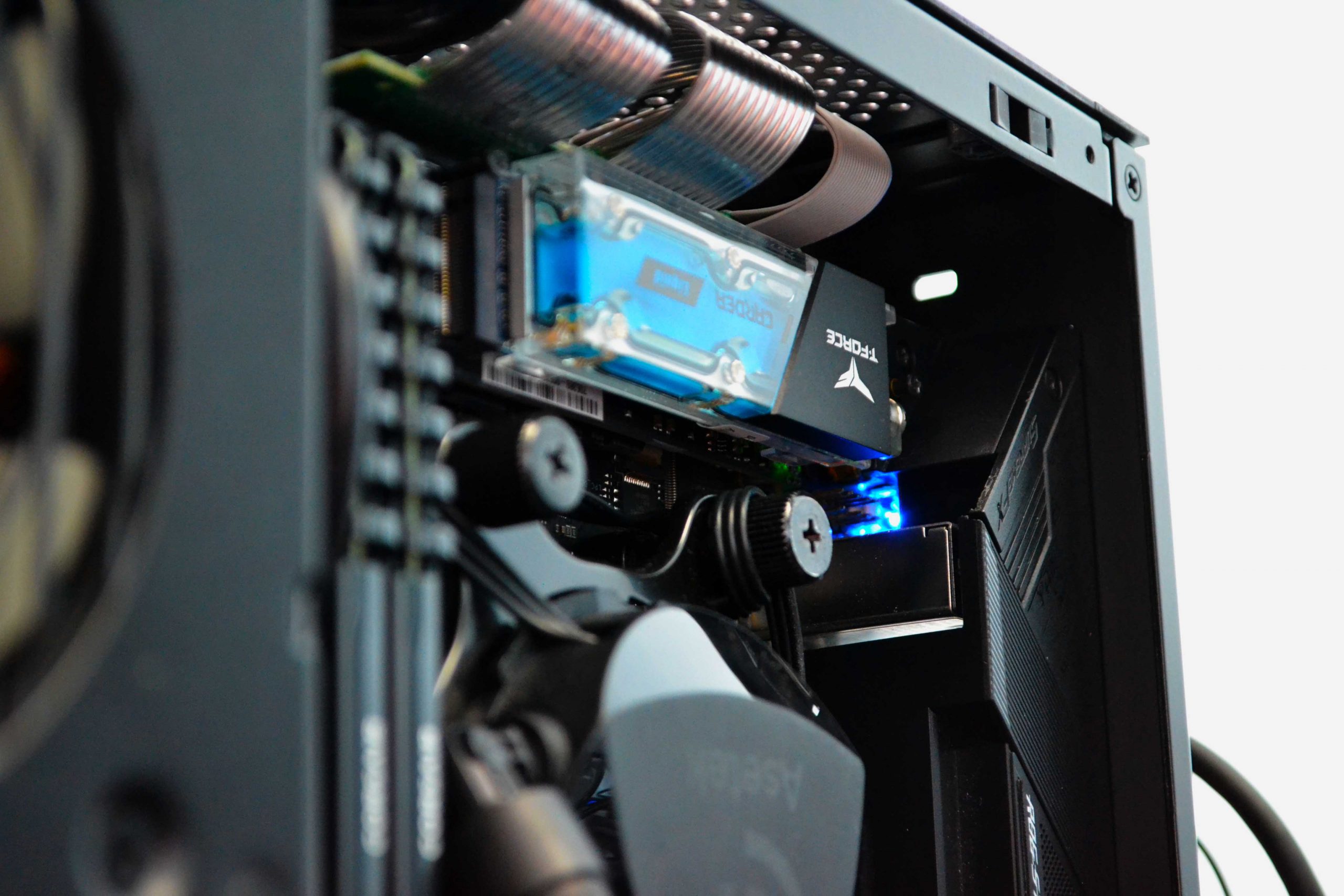 This clearly proves that the liquid solution T-Force employed works absolutely perfect and keeps the M.2 cool and thus virtually it will never throttle despite an ambient room temperature of 24 C and being practically on top of a very hot chipset which was around 77 degrees C.

The T-Force Cardea Liquid did it despite my efforts to make it throttle in such a hot environment. The miniature water cooled system works as advertised and thus the Cardea M.2 Liquid becomes the sexiest M.2 NVMe out there with no shadow of a doubt. The drive itself is also a performer with excellent results across the board but it outclasses anything out there regarding operating temps and sheer cool factor. The only heads up will come from installation clearance as I encountered on my ASUS B550i STRIX board which was a quick fix. Other than that, this does it all and proudly receives a definite Editor’s Choice & Unique awards.

+ Innovative miniature cooling design
+ Delivers as promised in a hot environment
+ Virtually the M.2 NVMe will never throttle
+ Coolest looking M.2 NVMe out there
+ The coolant can be replaced with any desired colour

– Quite tall
– Some interference with the fill/drain plug on some ITX boards.
– RGB maybe ?

A lot of thanks to Team Group for supplying us with this incredible piece !