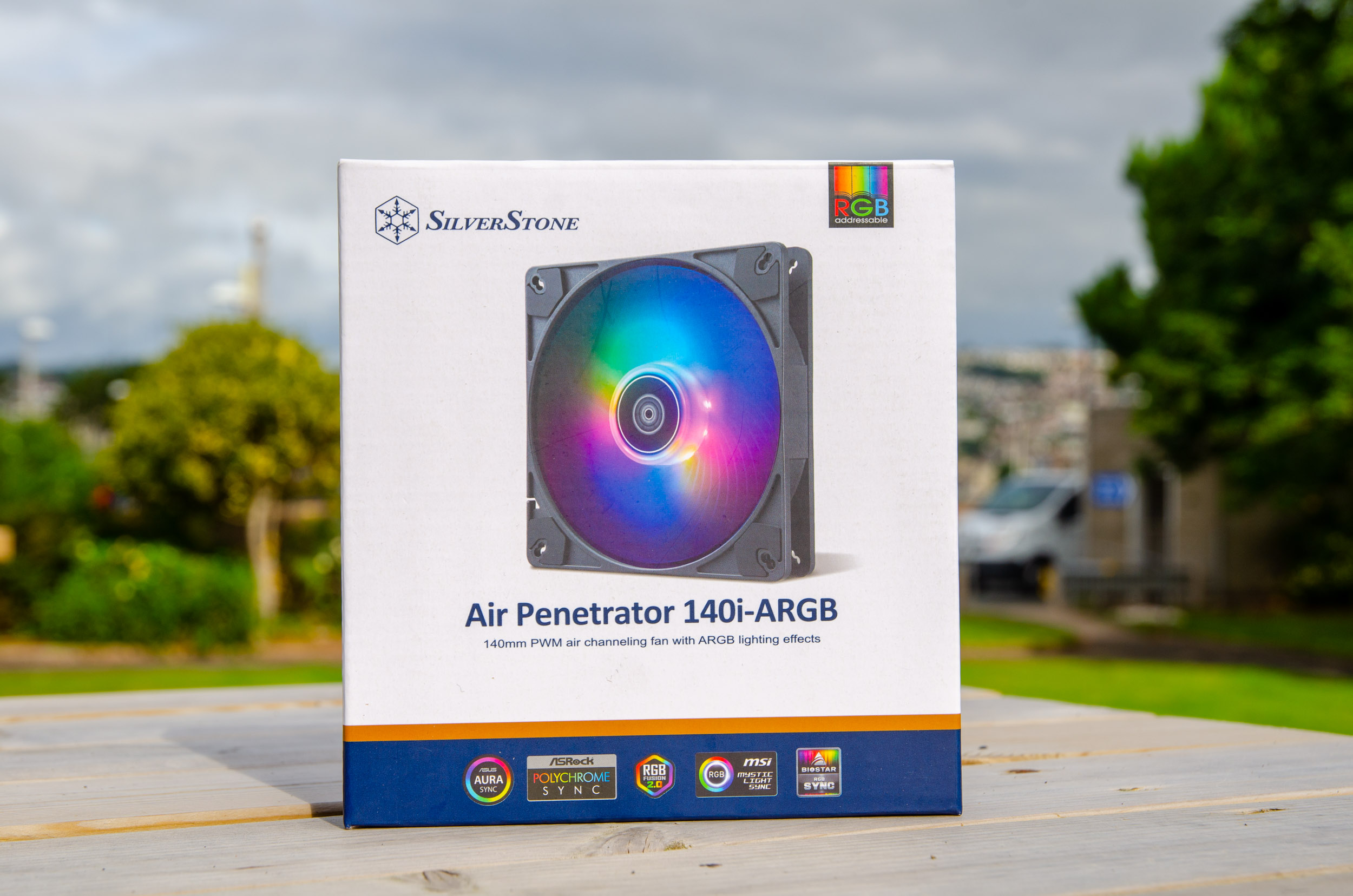 SilverStone is now offering what they call an “air channelling” specialized fan that also has ARGB and which is built on hydraulic bearings for silent operation and low energy consumption. This is the Air Penetrator 140i ARGB series which also features 135 and 140 mm mounting holes but for the moment only comes in the 140 mm frame size.

This model is the ARGB updated higher speed model over the standard one which is only available as a 140 mm. You can grab one for around $27, a price point with a lot of competition as we are about to see. 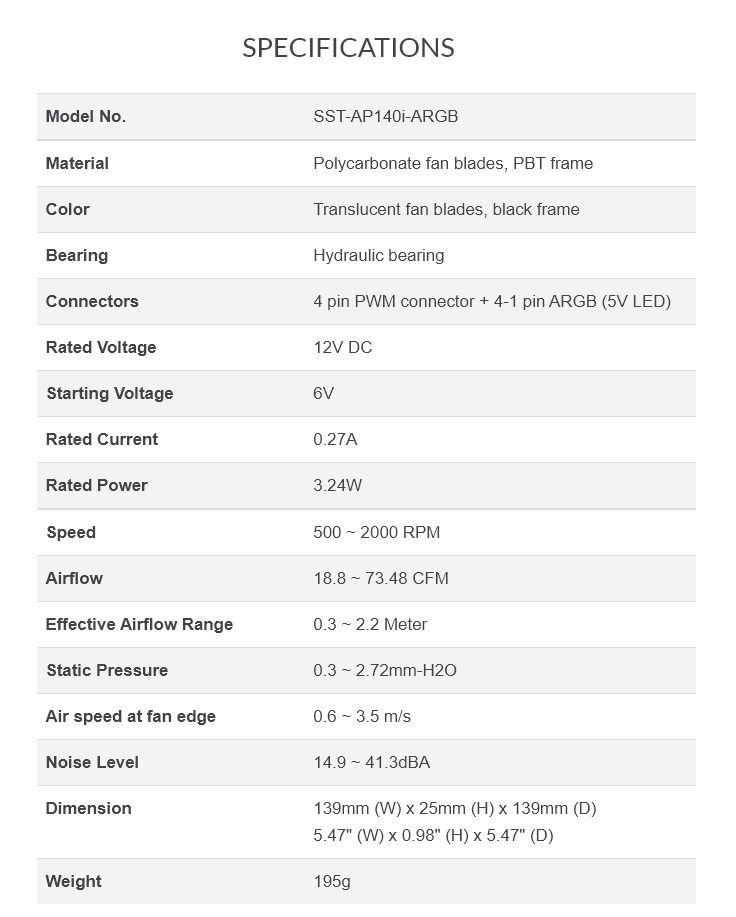 They come shipped in the regular SilverStone packaging design with a visual depiction of the fan on the front and with the main emphasis on the full RGB support and motherboard lighting software compatibility.

On the back we have the main specs detailed with even a quick diagram of how the air channelling affects the airflow versus some regular fans. 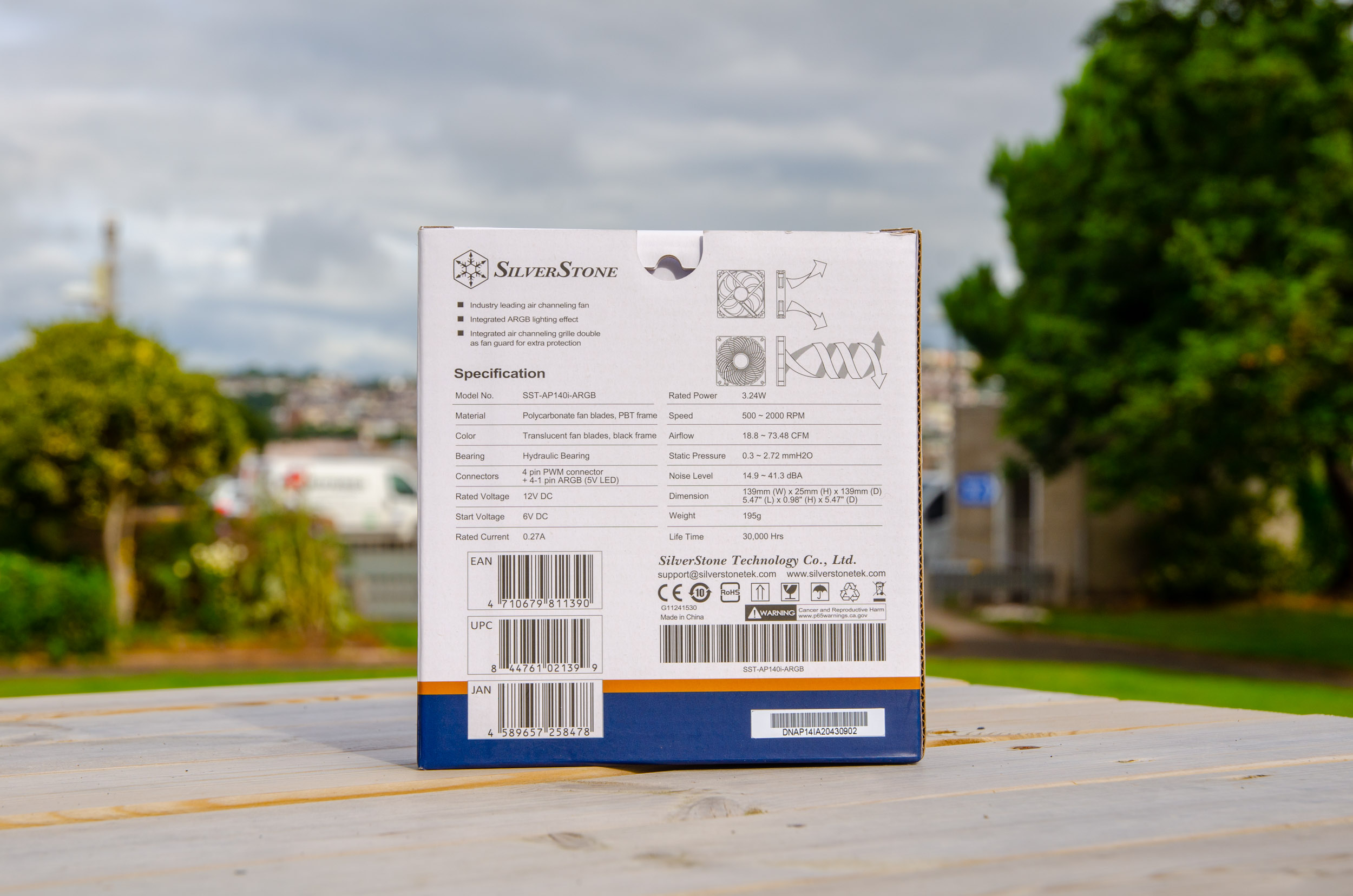 All of the included accessories are tucked in the upper part of the box. 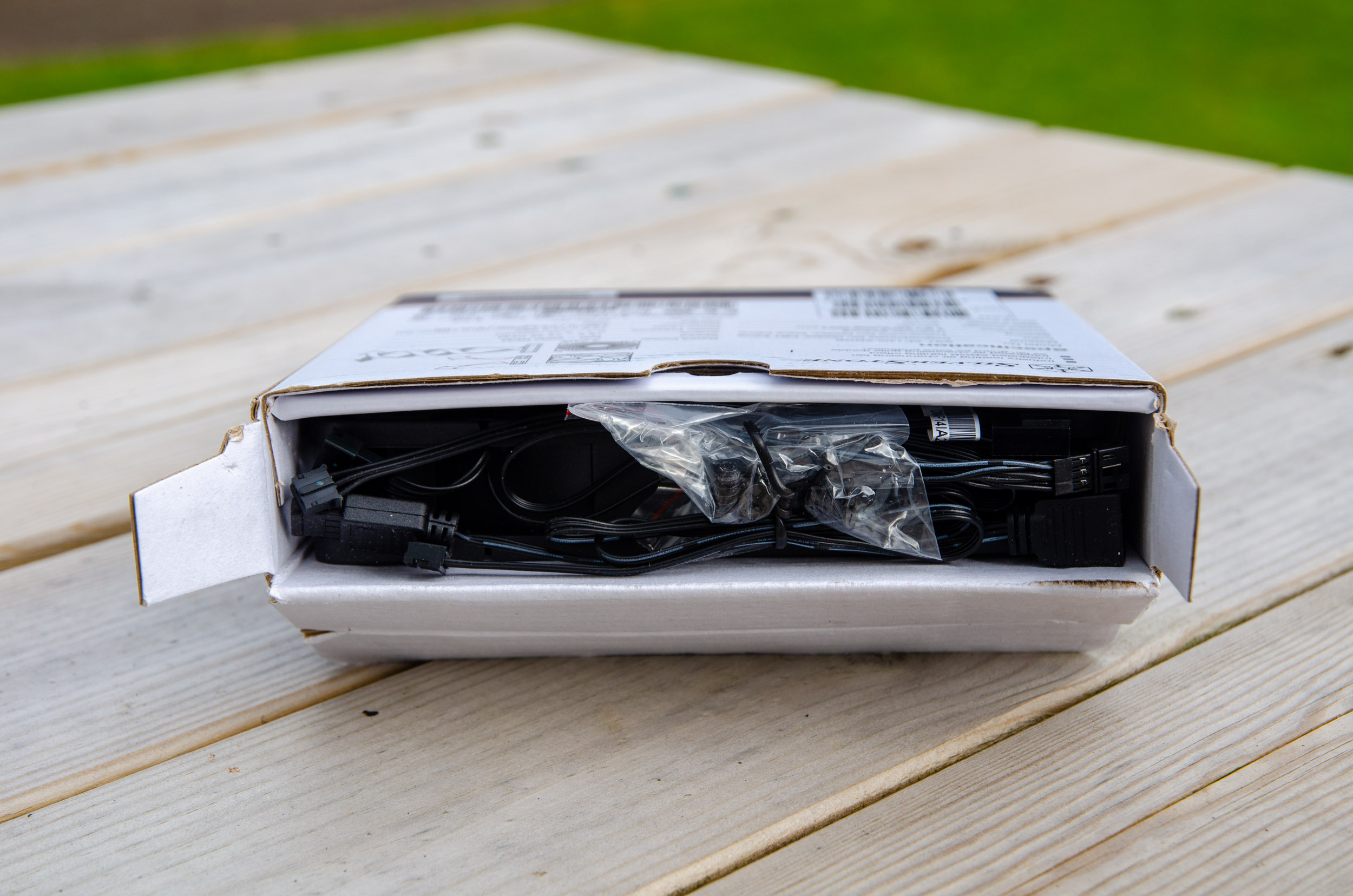 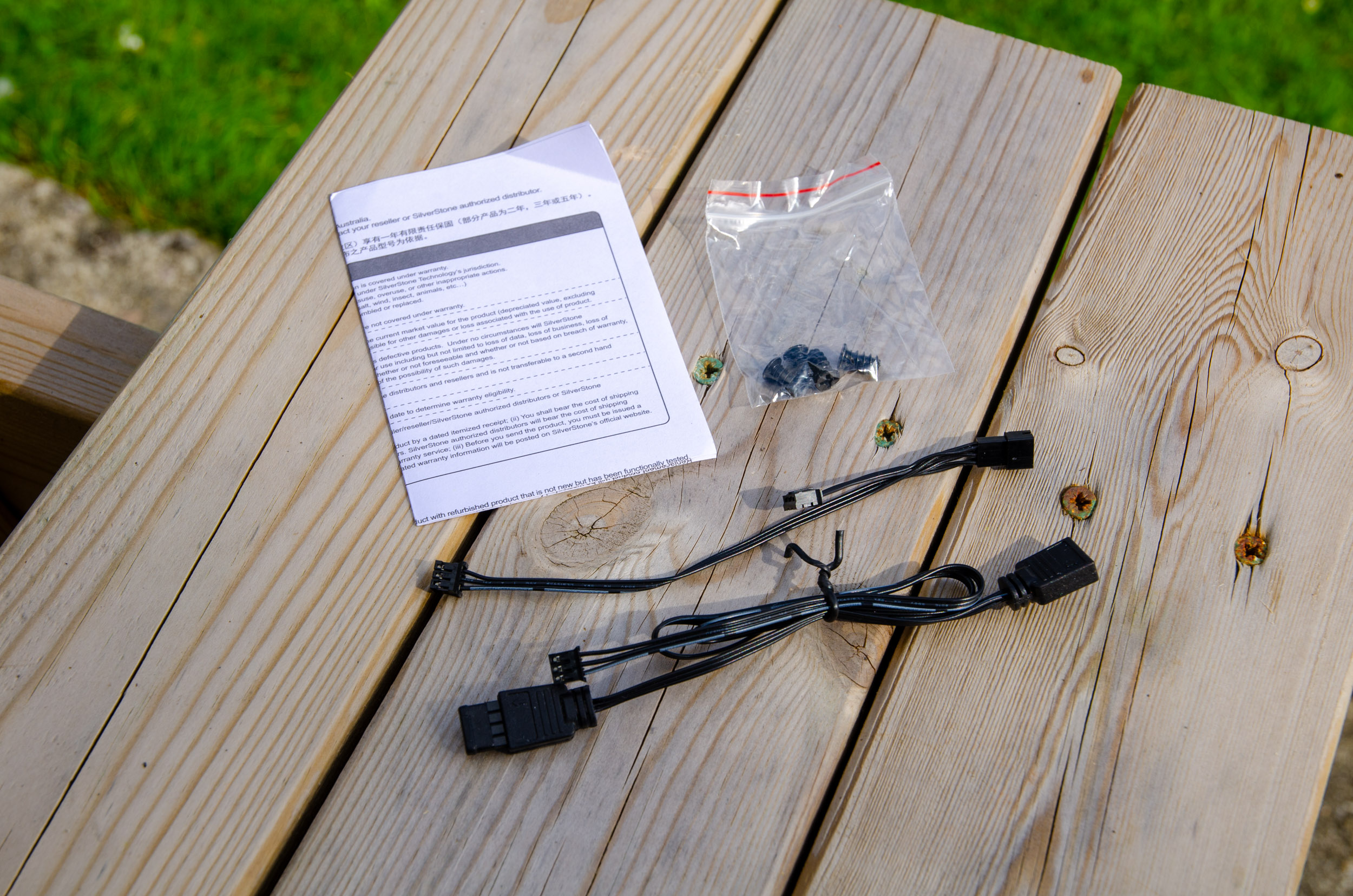 The 140i ARGB fans use PBT for the frame (polybutylene terephthalate which is a tough, durable plastic) and Polycarbonate for the fan blades. It weights 195g and measures 139mm (W) x 25mm (H) x 139mm (D). It has 7 translucid fan blades and needs a 4-pin PWM plug for power and a 4-1 pin ARGB for the 5V LEDs. 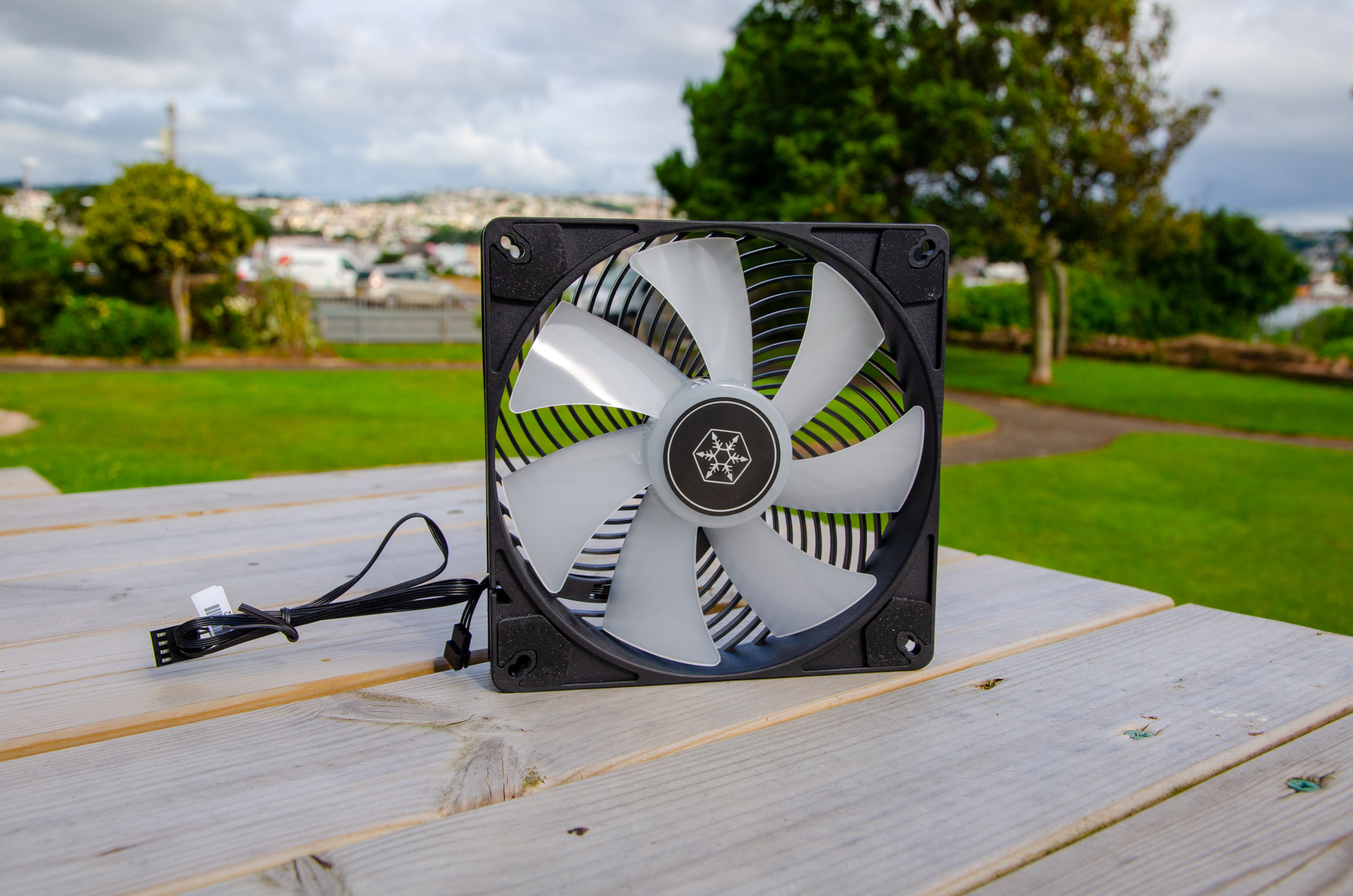 On the back we see the air channelling grille that also acts as a fan guard for extra protection. Since it uses hydraulic bearings for the rotor, all of these features help the fan to spin up to 2000 RPM and thus displacing up to 73.48 CFM of airflow, with a static pressure of 2.72mmH2O and with a reach of up to 2.2 Meters. At full chat the fan is rated up to 41.3dBA of noise output and should last at least 30,000 hours (~3.5 years) of continuous operation. 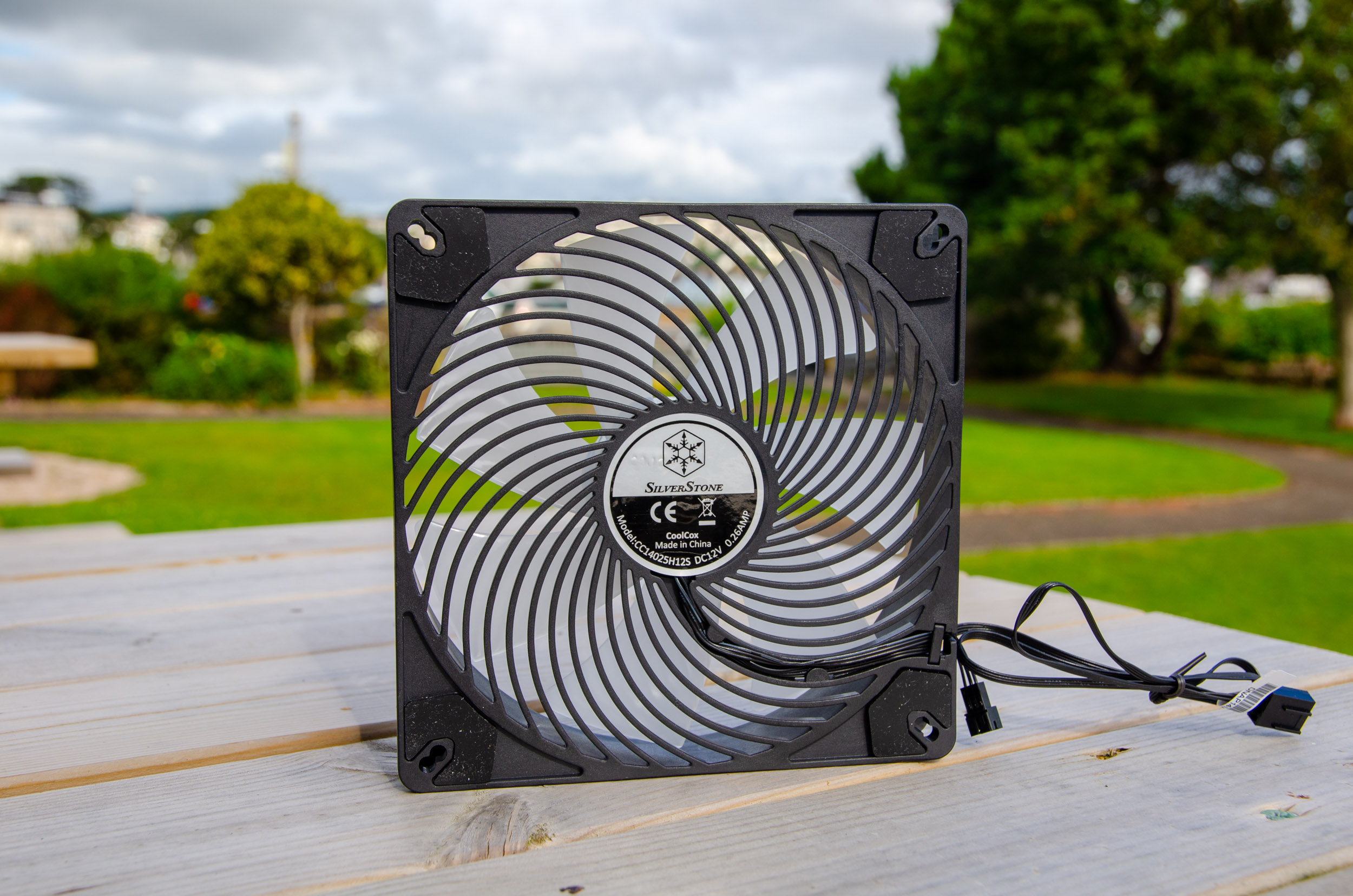 Both sides of the fan have preinstalled rubber anti-vibrational pads and even feature 135 and 140 mm mounting holes. 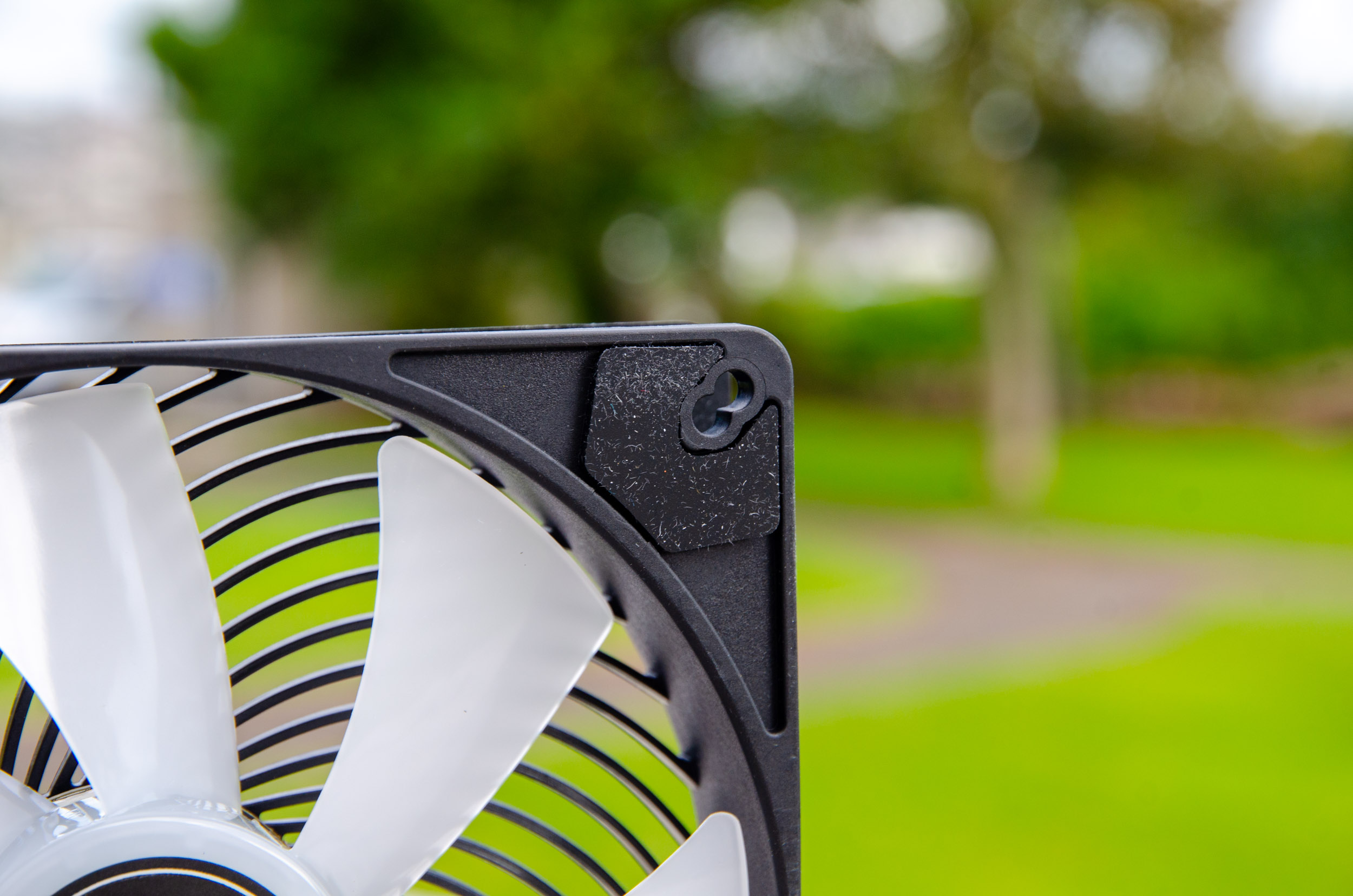 The RGB is facilitated by the presence of the 12 LEDs just beneath the rotor cap. 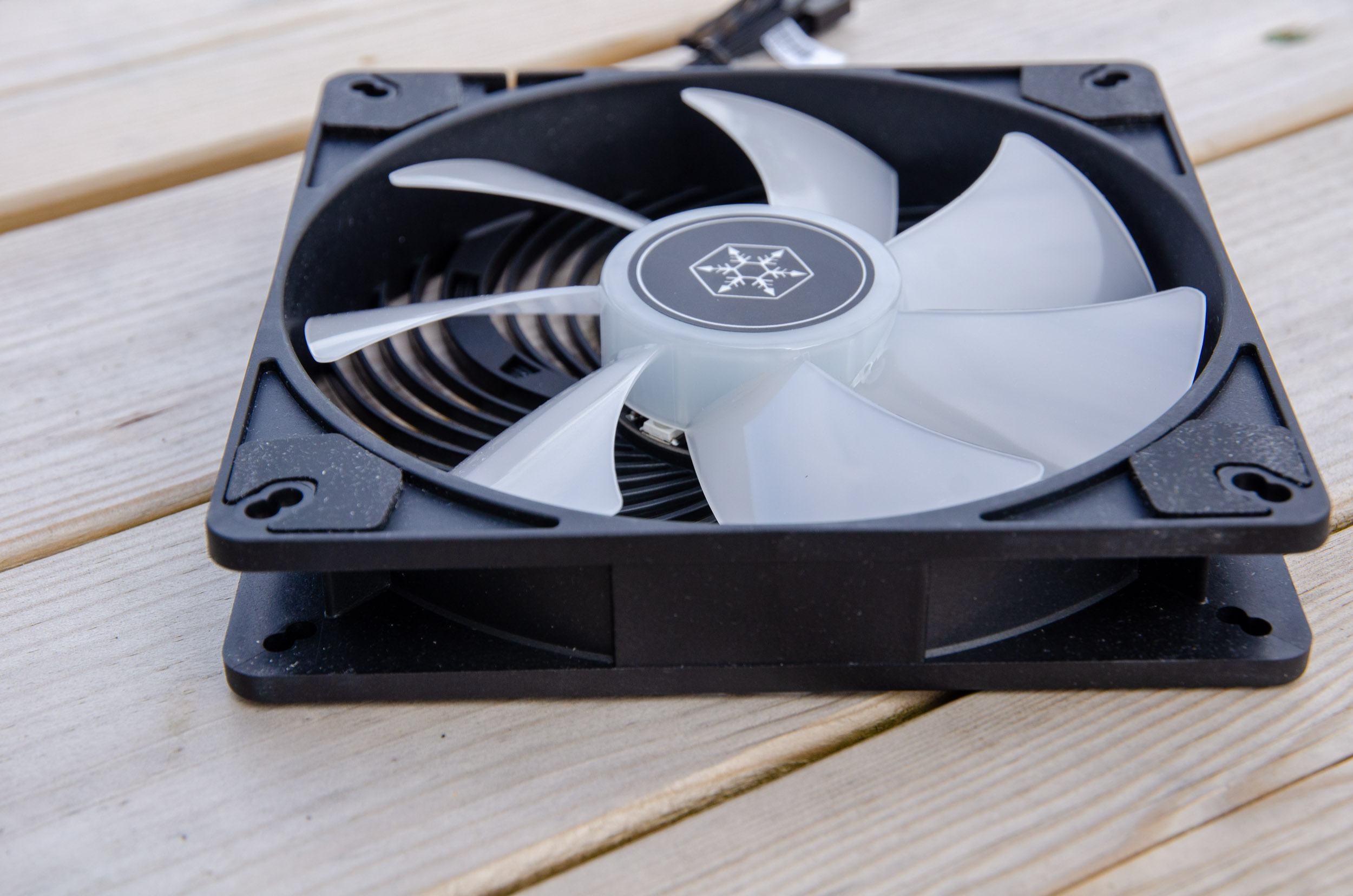 When in use, as you can see they have a great colour diffusion and of course are fully compatible with all of the main motherboards’ lighting control software. 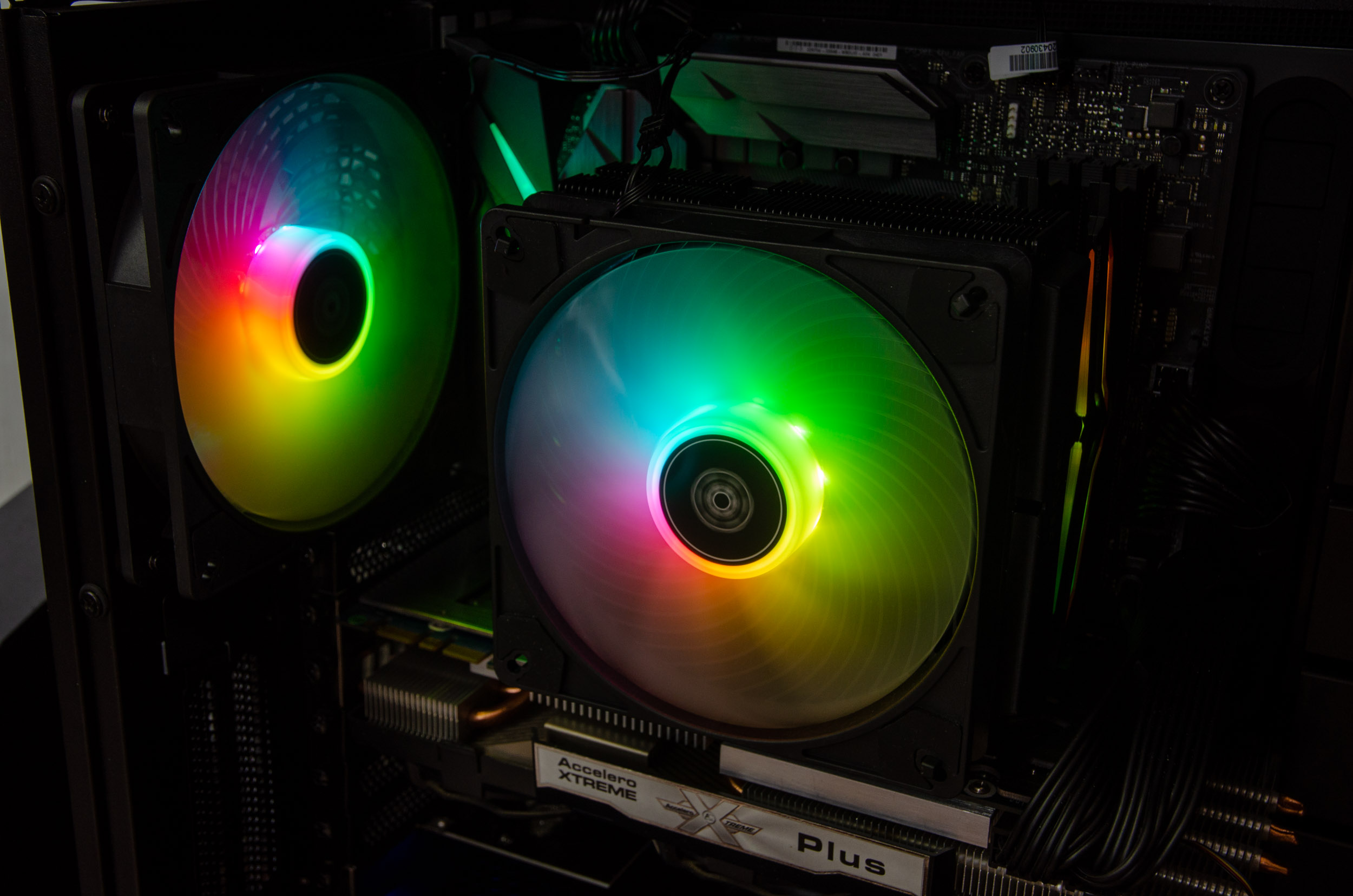 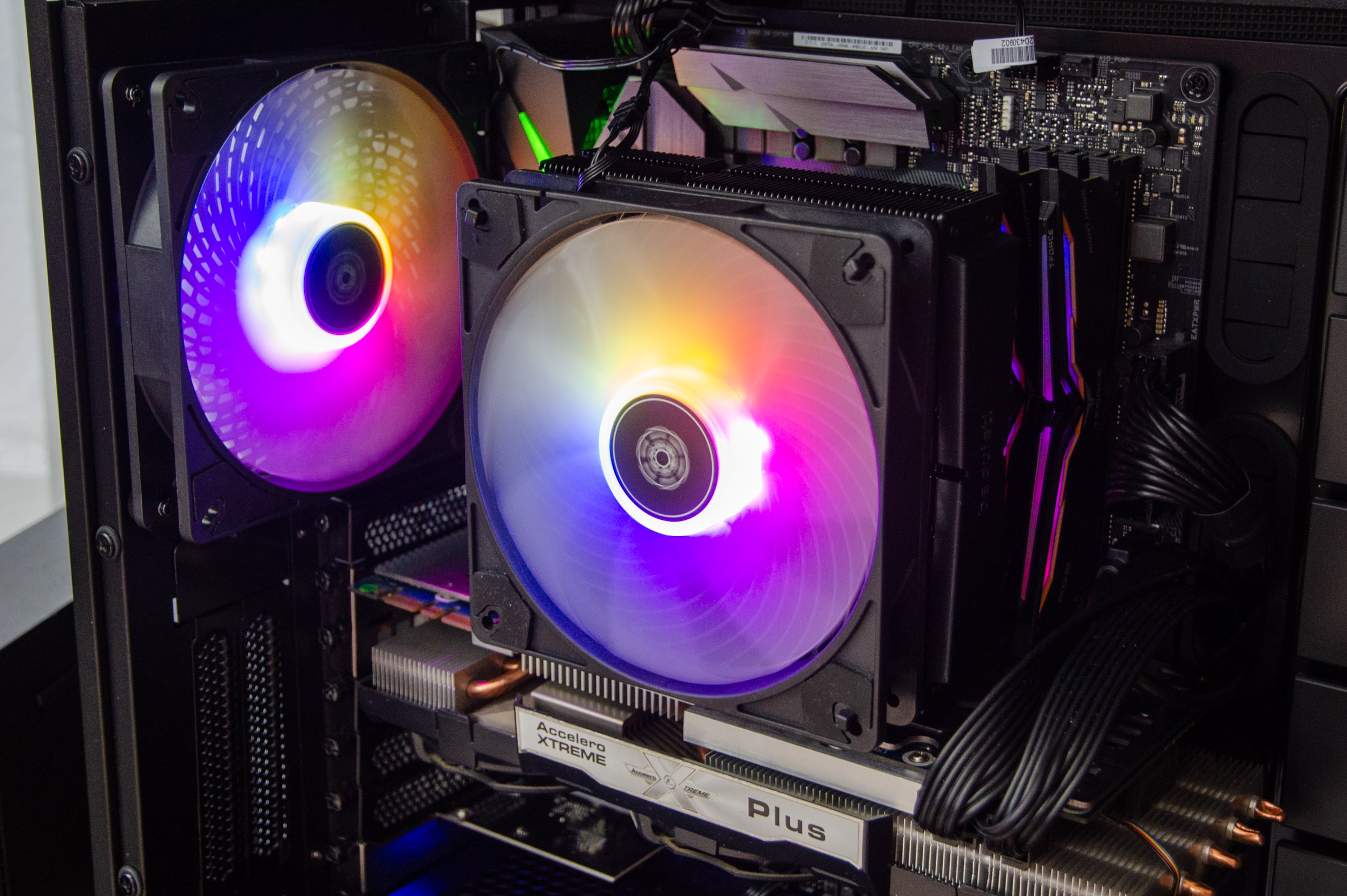 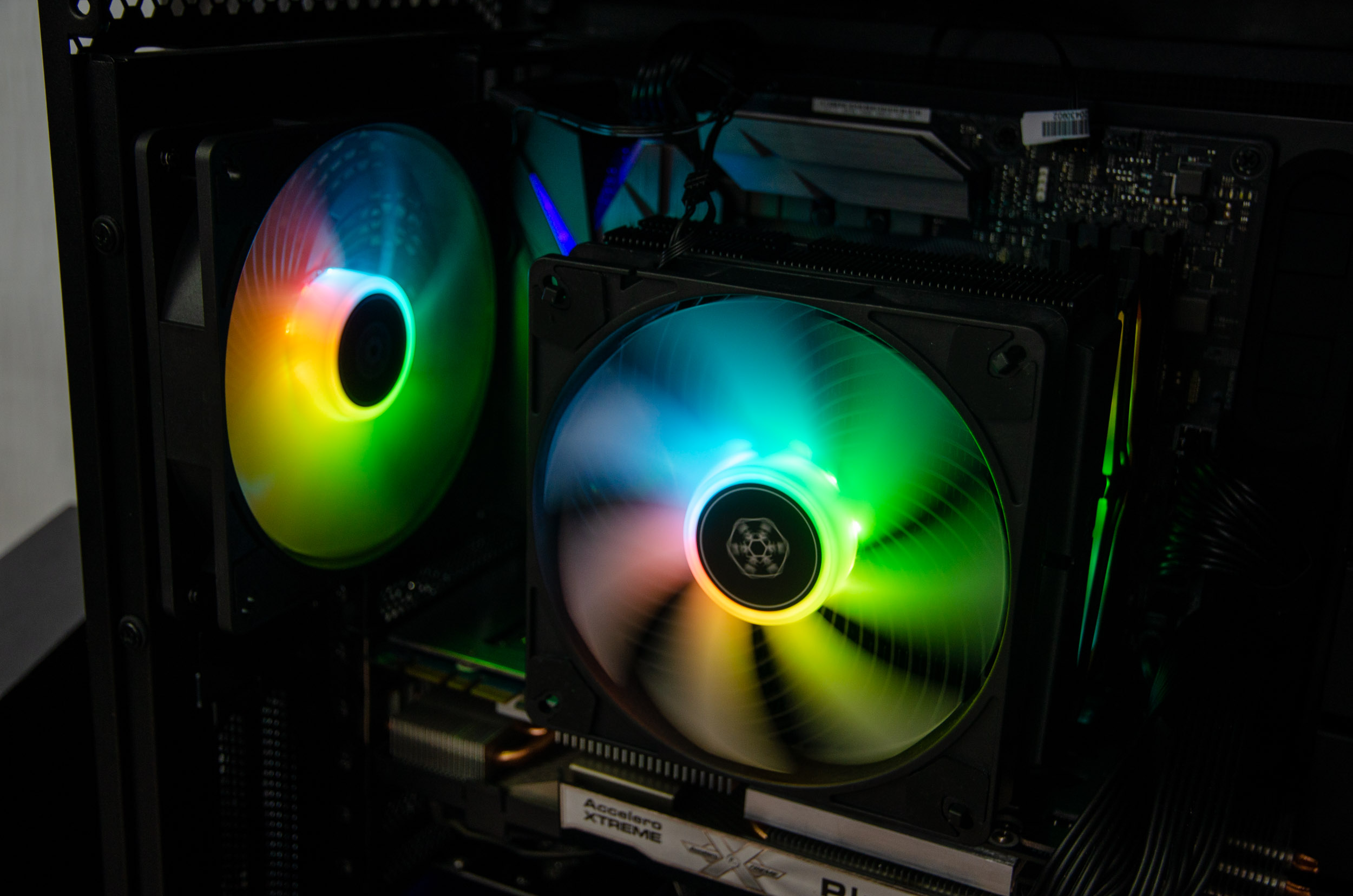 It’s easy to connect them when you have multiple examples, as shown in their presentation video. 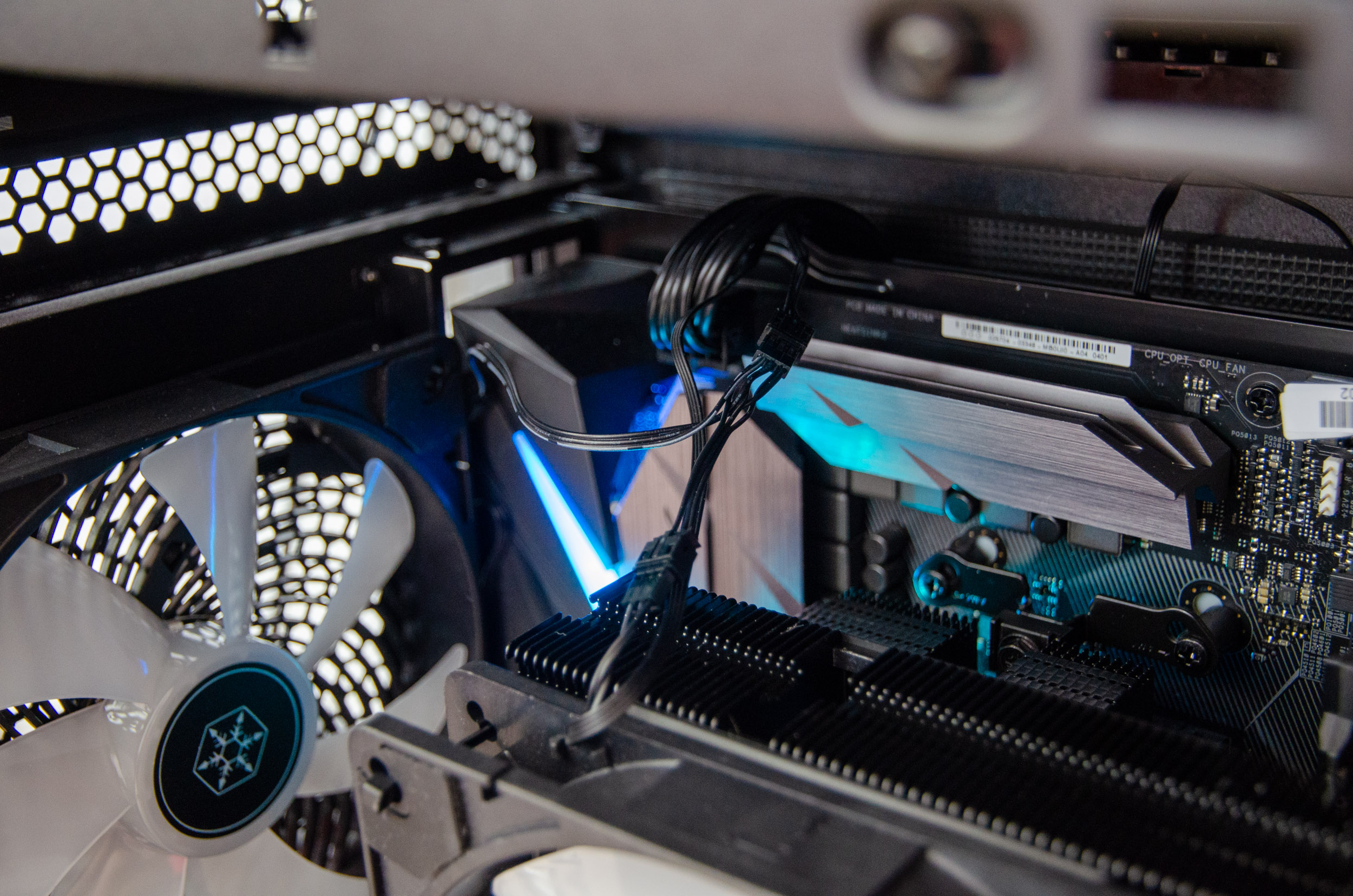 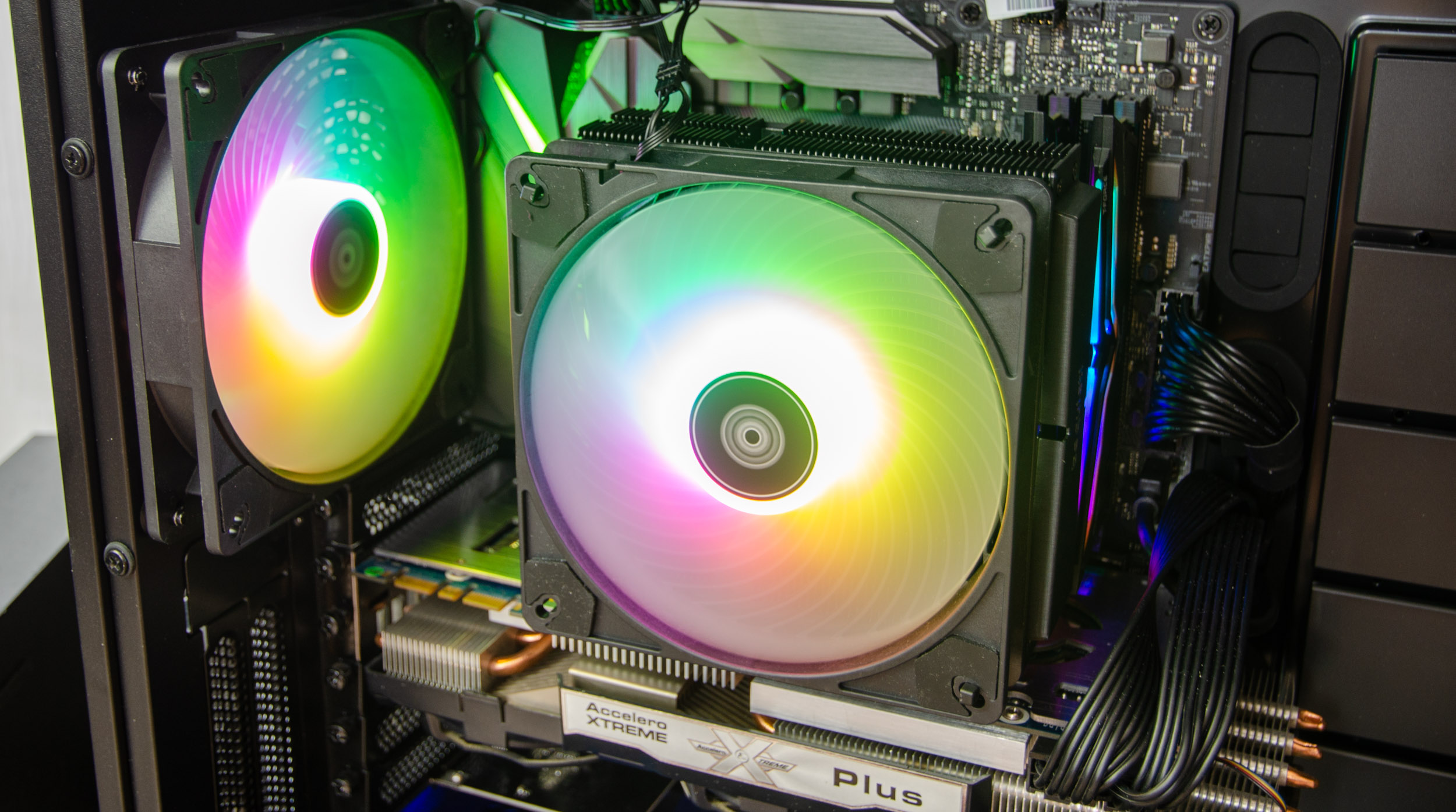 In the first CPU test, Cinebench R15, the SilverStone 140i has some fierce competition from some of the best brands on the market when it comes to overall cooling performance and noise output. It settles for a third place on the podium.

Then in the main torture test, via AIDA64 which ran for 2 minutes, the same overall hierarchy is preserved. This is not necessarily a bad thing for the SST 140i since, again, it’s in the ring with one of the best 140 mm fans out there.

Now let’s test the SST 140i’s claimed airflow reach by installing two of them in the front of the testing case and then comparing them to the stock ones that came with the enclosure plus an extra set for diversity, in a benchmark run in Rise of The Tomb Raider, since the GPU is the farthest away from the fans and will benefit the most out of any increase in airflow.

As advertised by SilverStone, yes, these Air Penetrator fans do offer an extra reach of airflow over a longer distance and thus it’s reflected in the lower temps for the GPU above the 50% RPM point.

The last test is the noise output. Overall they are very close to the eLOOP ones that spin 500 RPM lower anyway and this fact alone is a win for the SilverStone Air Penetrator series.

What we have here is an excellent ratio of cooling performance and noise output from these Air Penetrator 140i ARGB fans from SilverStone. They managed to held their ground against some of the best brands out there within minimal margins. The extra advertised reach is valid via the air channelling optimization and thus they will make excellent case fans as well. The pricing is a bit high when for the same asking price you can get a 3-fan kit from lower tier brands or even get anything from the tested fans presented today but in the end this is up to you to decide.

Many thanks to Silverstone for supplying us with these fans!