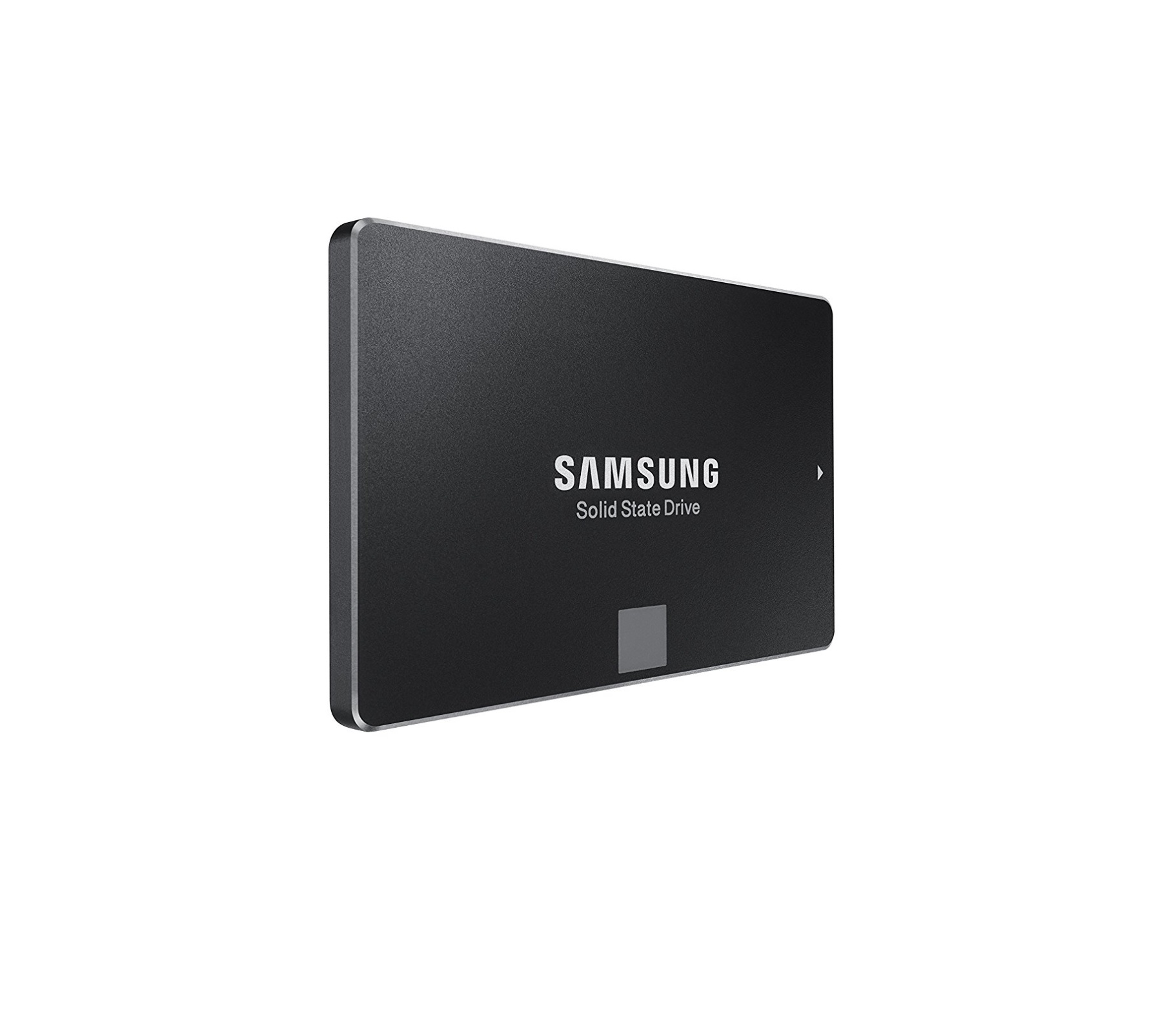 Everybody knows Samsung is a market leaders when it comes to SSD performance, and its flagship 850 Pro put the bar even higher. It offered maximum capability on all fronts from speed, to advanced research and development with the purpose in mind to offer the best overall product.

The 850 Evo is built to offer a better and more competitive price while sacrificing some features. But it still uses the innovative 3D V-NAND that made its debut in the Pro. Backed up by a 5 year warranty for their TLC cells, Samsung again has one of the best selling products on the market. 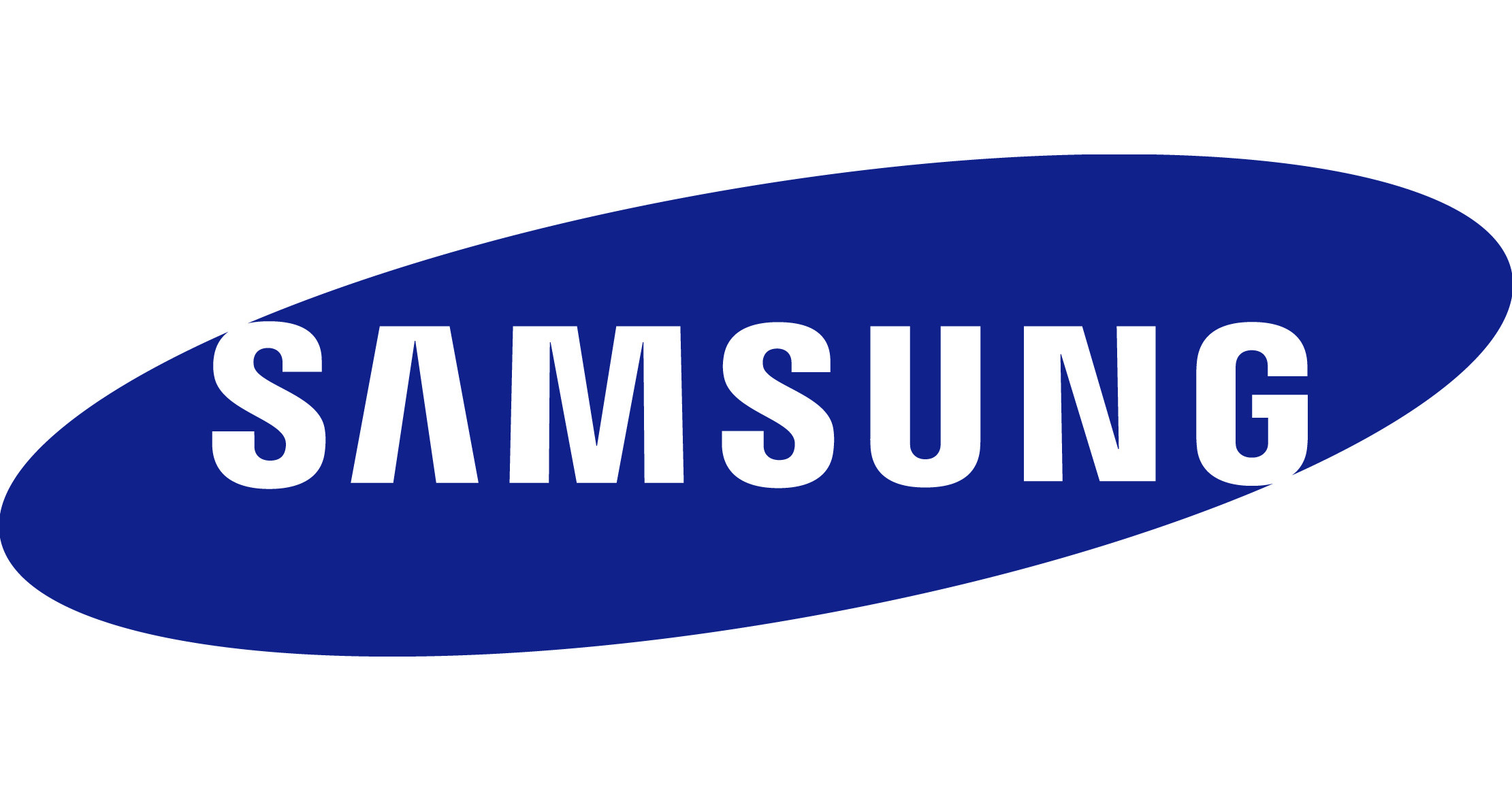 Samsung is a South Korean multinational conglomerate company headquartered in Samsung Town, Seoul founder in 1938.
It comprises numerous subsidiaries and affiliated businesses, most of them united under the Samsung brand, and is the largest South Korean business conglomerate.

Let’s start with the obvious stuff. The 850 Evo has a lower price because it’s built with TLC rather than MLC memory chips. They’re triple-cell rather than multi-cell bits of silicon, which means that each individual data cell stores three bits of data rather than two. That choice means more data can be stored in the same amount of memory, which means that the Evo’s costs are lowered – but it also means performance will take a hit because of that increased density.

Before we continue let’s take a look at the complete specs of all the 850 EVO range.

The 850 Evo’s smaller capacities – 120GB, 250GB and 500GB – are powered by Samsung’s MGX controller. It’s a newer chip than the MEX used inside the 1TB 850 Evo and all of the 850 Pro drives, and it’s got two cores rather than three. Samsung claims is a more power-efficient, and that its smaller SSDs don’t need the third core anyway.

The endurance ratings go up proportionally as the capacity increases. It features also the Turbo Write feature which basically means it accelerates write speeds by creating a high-performance write buffer in the SSD – a SLC chip. But this is limited (3GB on the 250 GB) and once it is full it will drop the performance from the theoretical 520 MB/s write to a max f 300 MB/s and the IOPs from 88k to 70k.

And another boosting technique, but this one you can activate yourself via the Samsung propitiatory Magician software, which functions by processing data on a system level using free PC memory (DRAM) as cache. The maximum memory in RAPID mode has increased from 1GB, in the previous version, to up to 4GB with the 850 EVO when implementing 16GB of DRAM.

So with the technical aspects covered, let’s move forward.

Withe the new 850 series, Samsung changed the color scheme for their SSDs so to be better differentiated. All black background it still used on the PRO lineup to indicate high performance and to appeal to the enthusiast market. And now the EVO has an all white background (former 840 was grey) and the product is visually depicted. Then the capacity is in the top right corner, and the new V-NAND technology is mentioned alongside the 850 range. 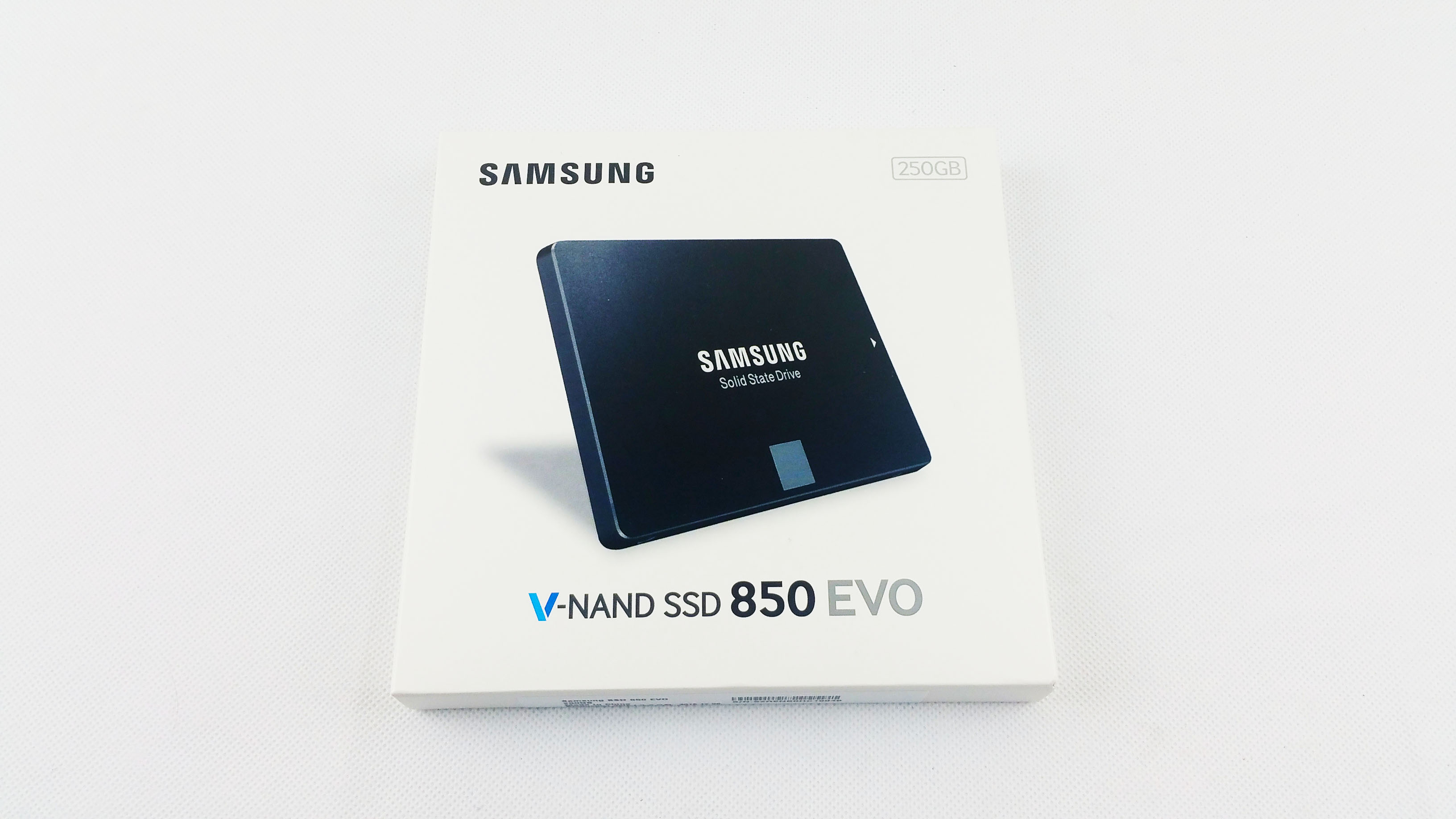 Flip the box, and we have a powerful statement “A new caliber of performance & endurance” which is back up by the new 5 years warranty (compared tot the 3 in the former 840 series). The V-NAND technology is mentioned again represented by a round stamp like drawing. 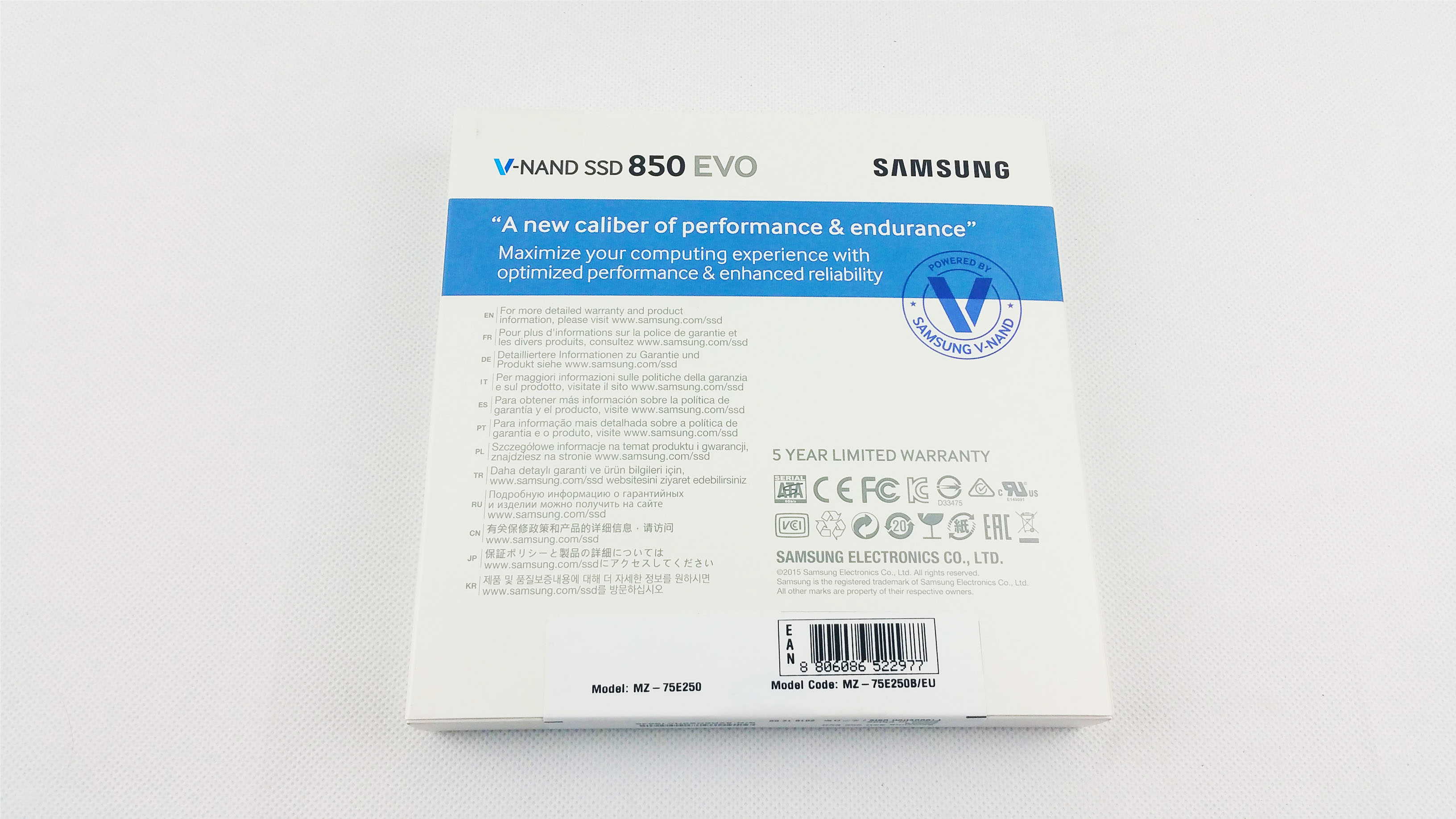 Inside we see that the Samsung 850 EVO 259 GB is nested in a plastic tray. 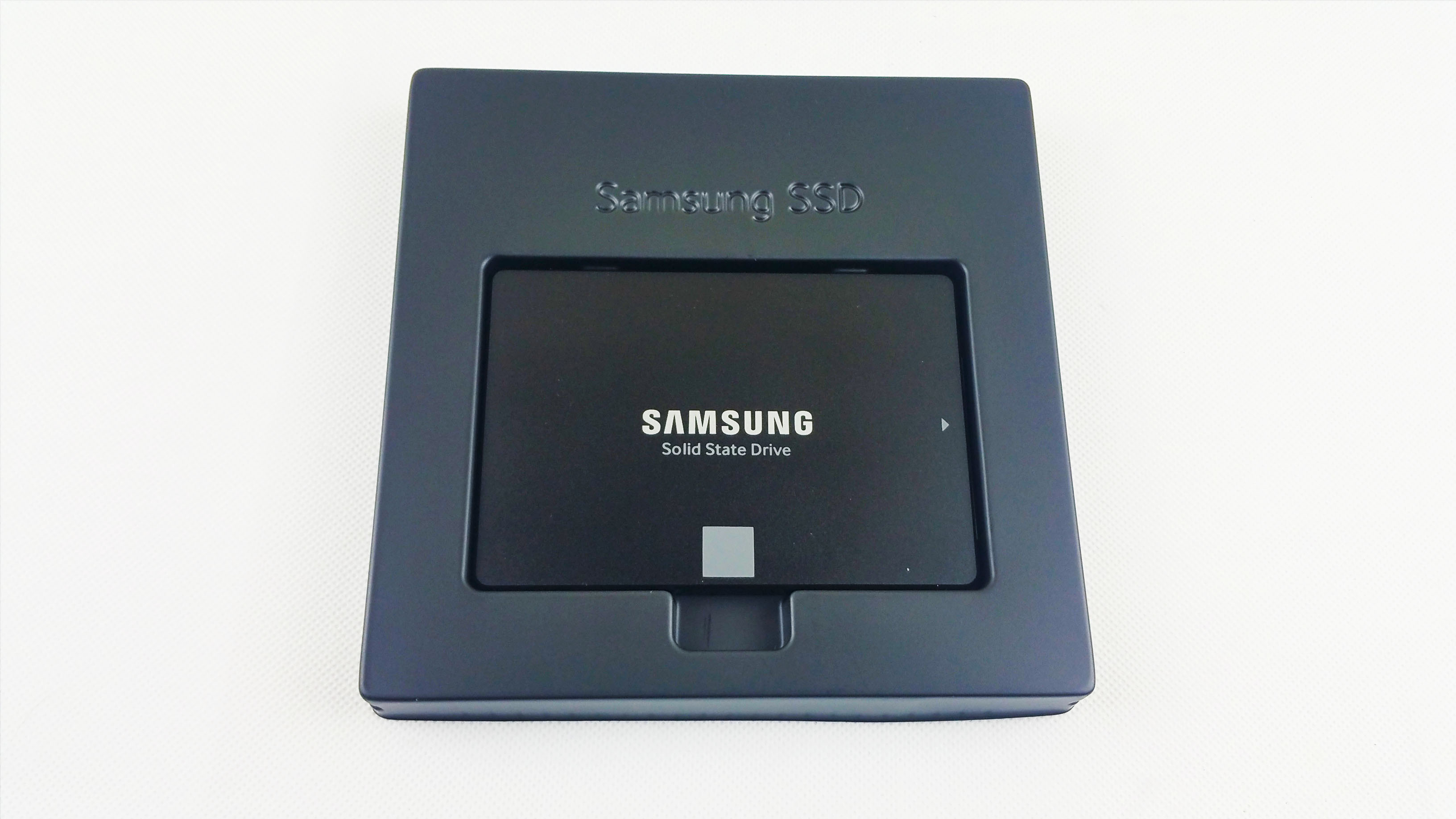 On the other side of the tray, we have an envelope that contains the driver CD, installation guide and warranty card. 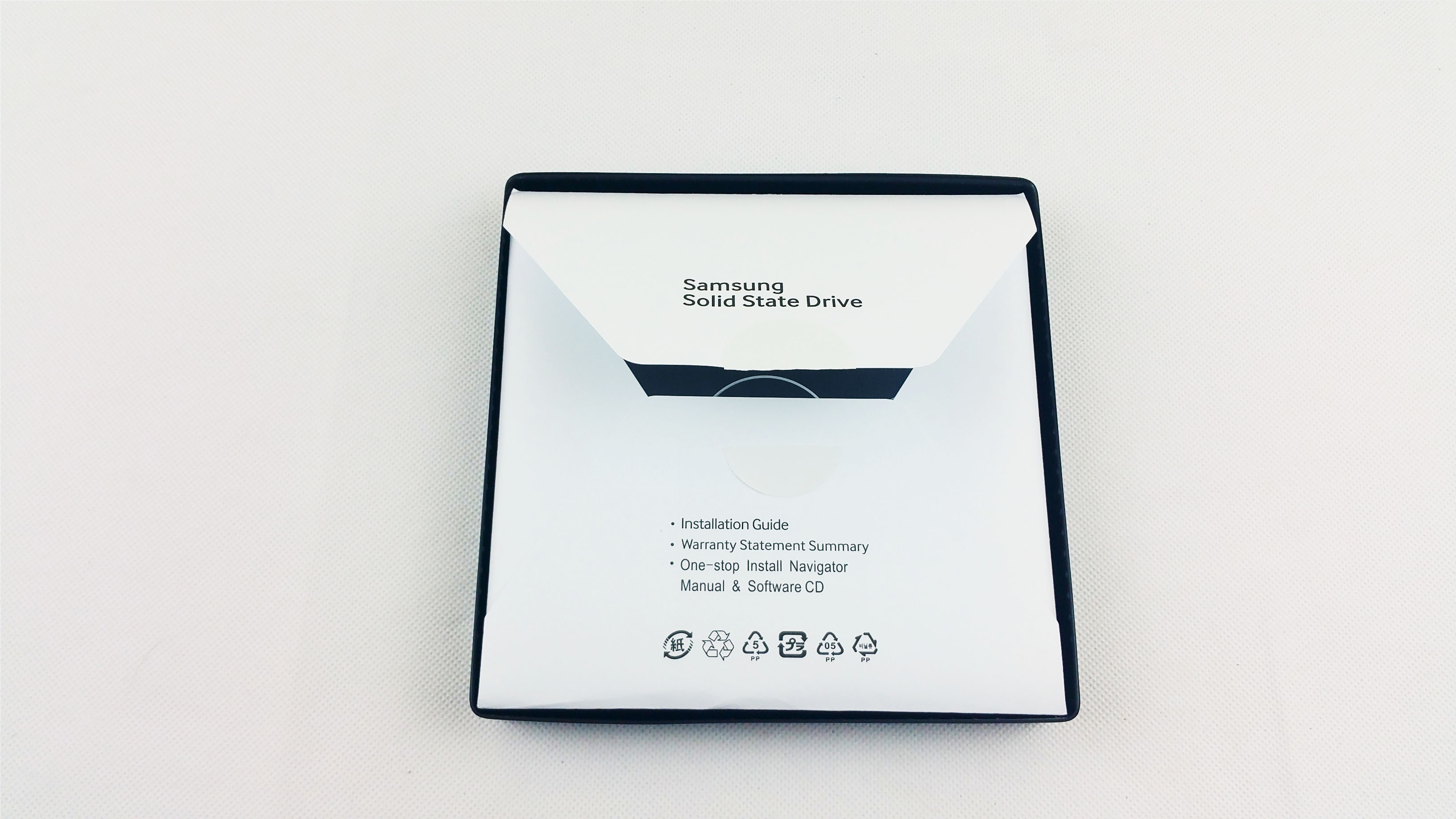 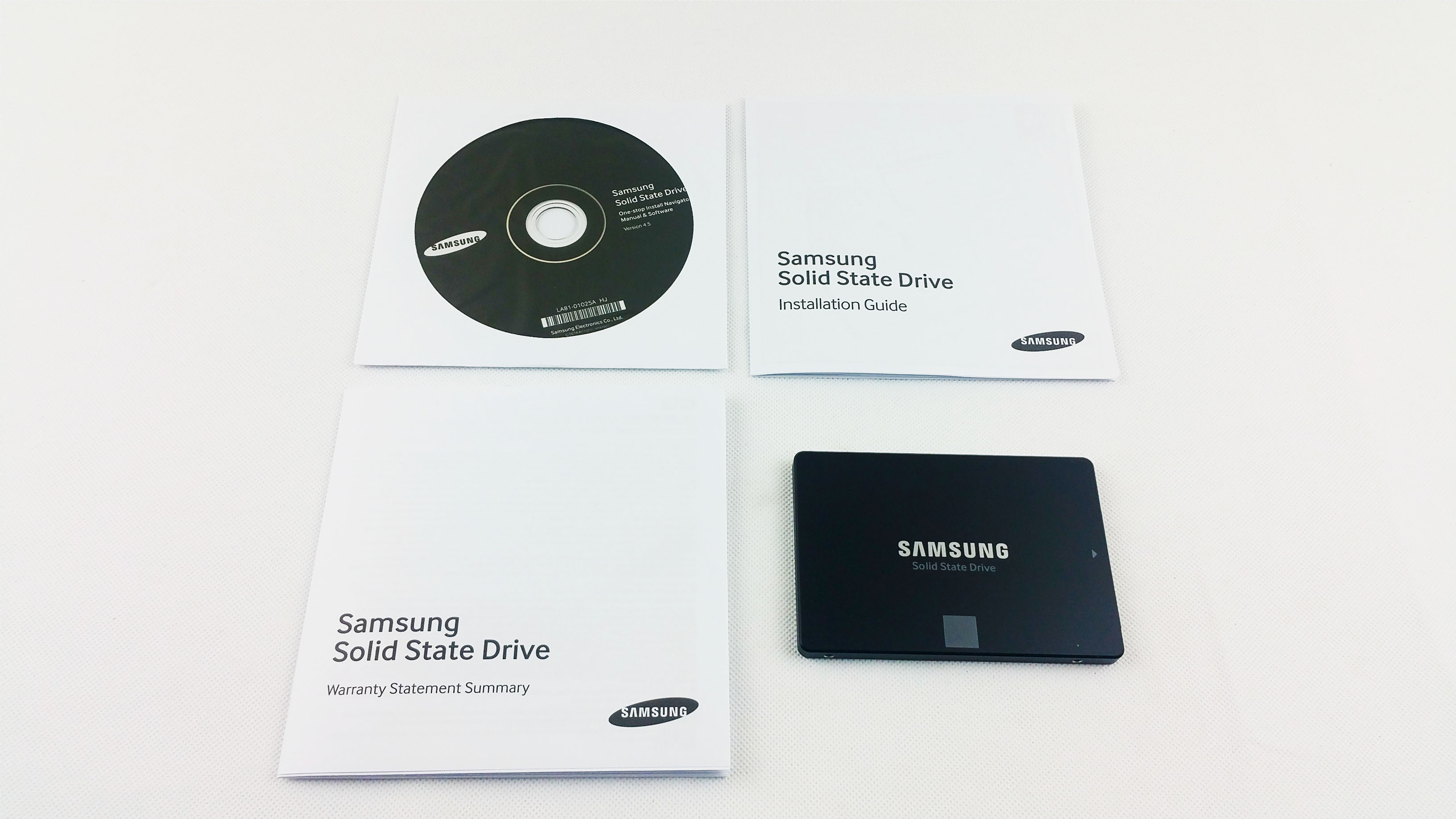 Now the drive. Has an all metal housing and as accustomed by SSDs, they are very light in the hand. Don’t worry, they are not empty. 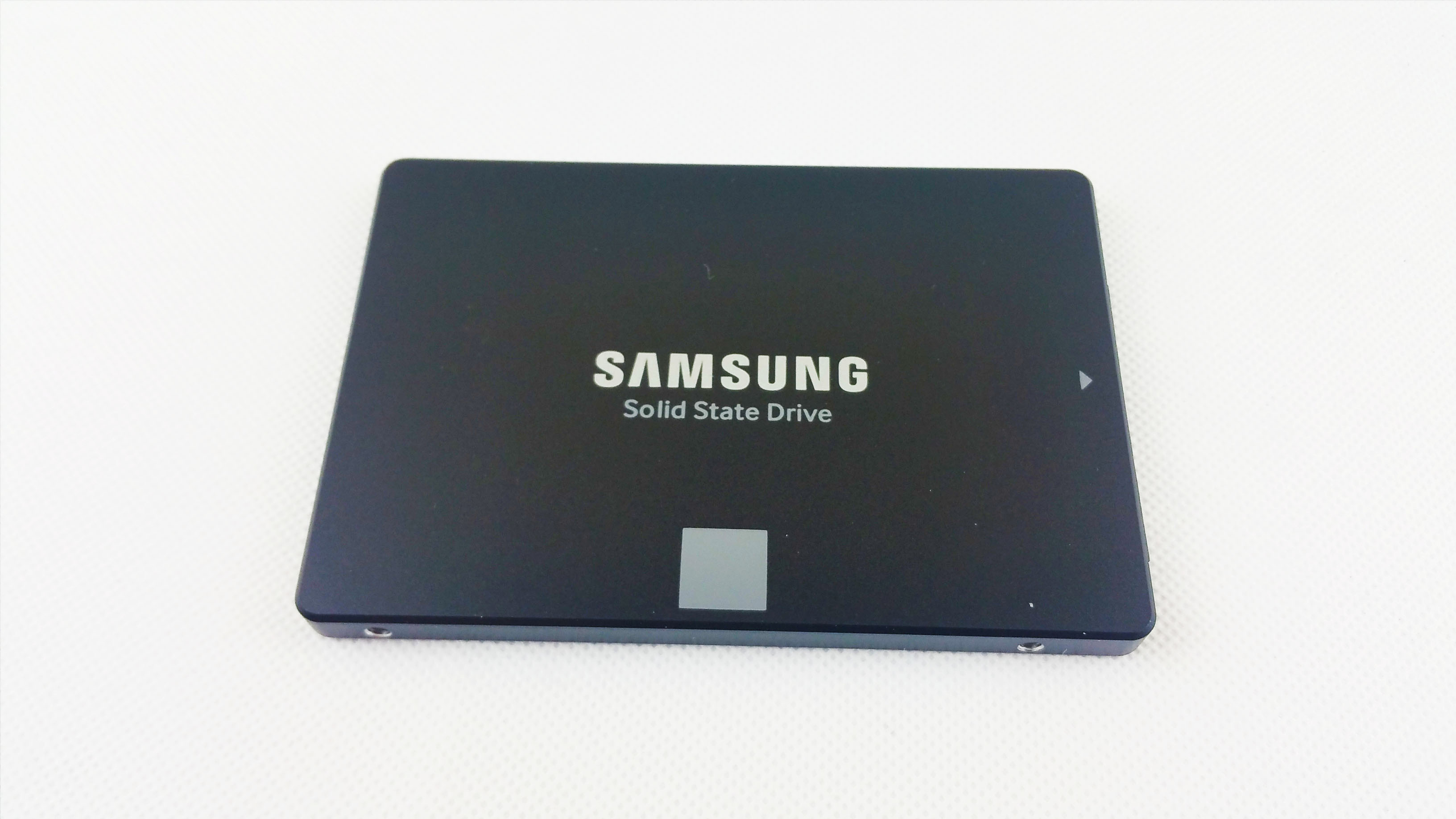 To see why they are this light, this is the complete PCB. That’s it ! On the higher capacity models, the PCB will double in size and that even then will not occupy the whole housing. 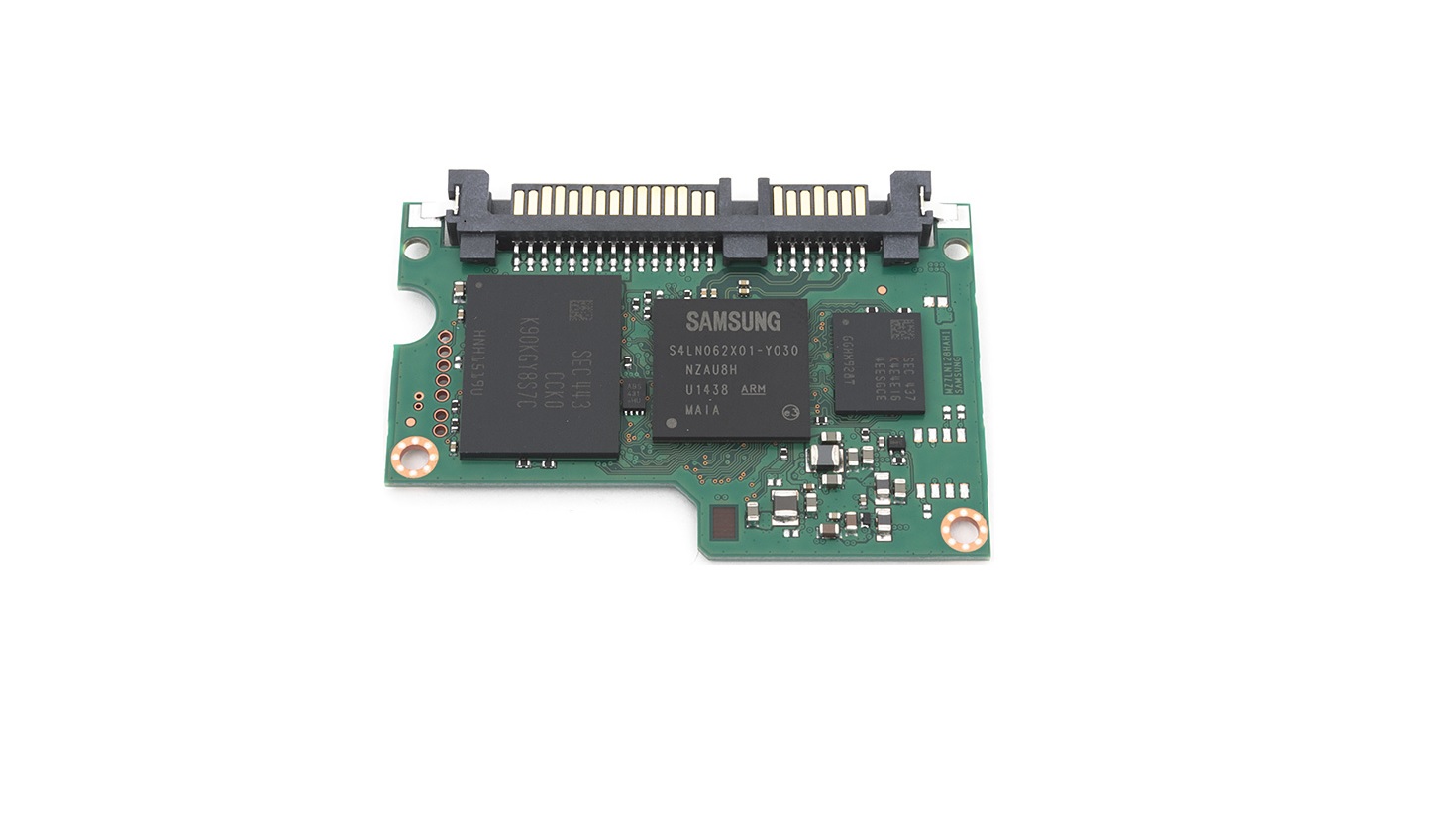 Then the back of the SSD we learn besides the capacity, the detailed product number and the serial number. On the left there is the standard SATA III interface and power connector. 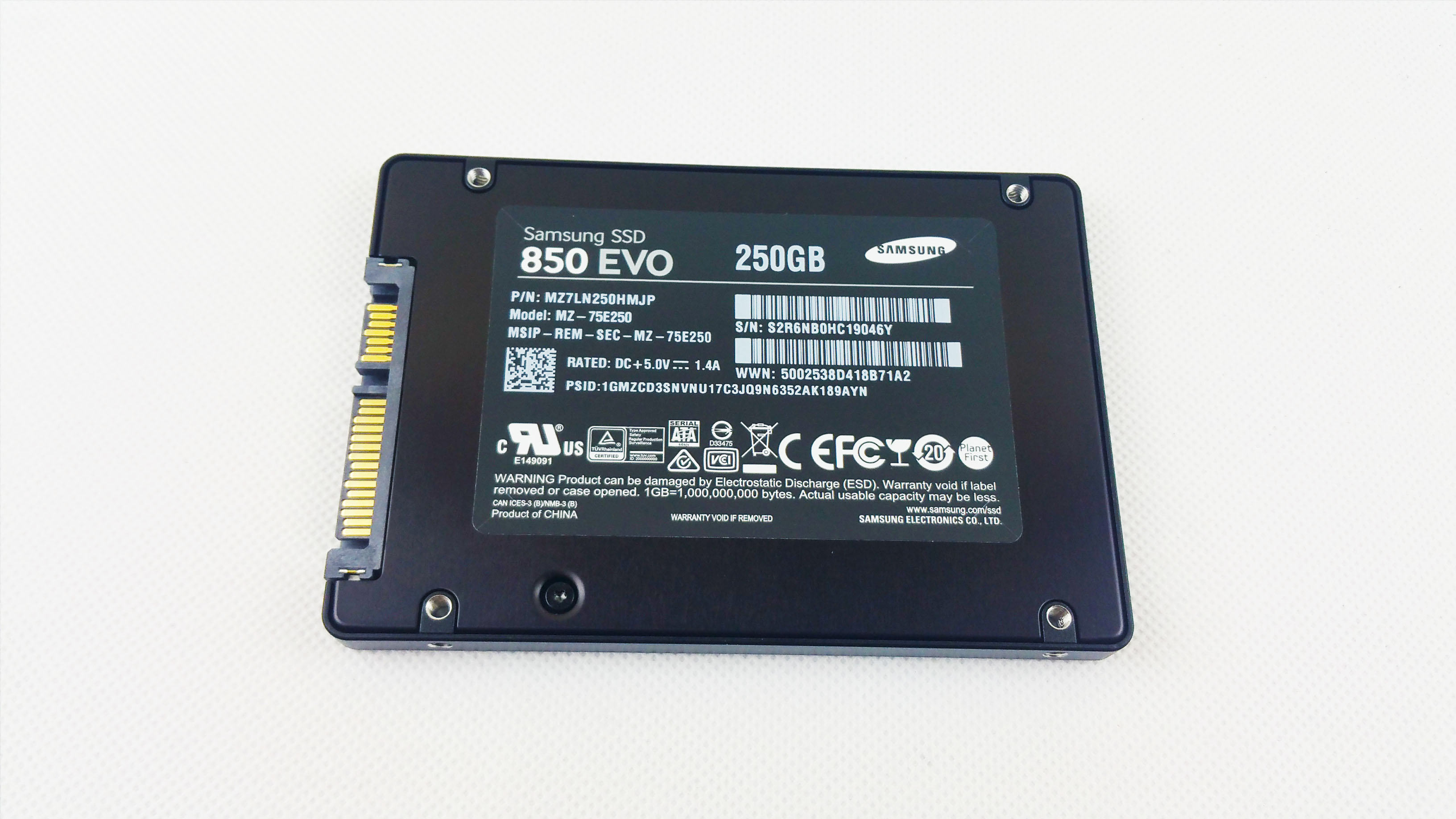 Synthetic tests and some real life file transfers.
Plus this time we upgraded one of our laptops with this drive and to see how it would perform. 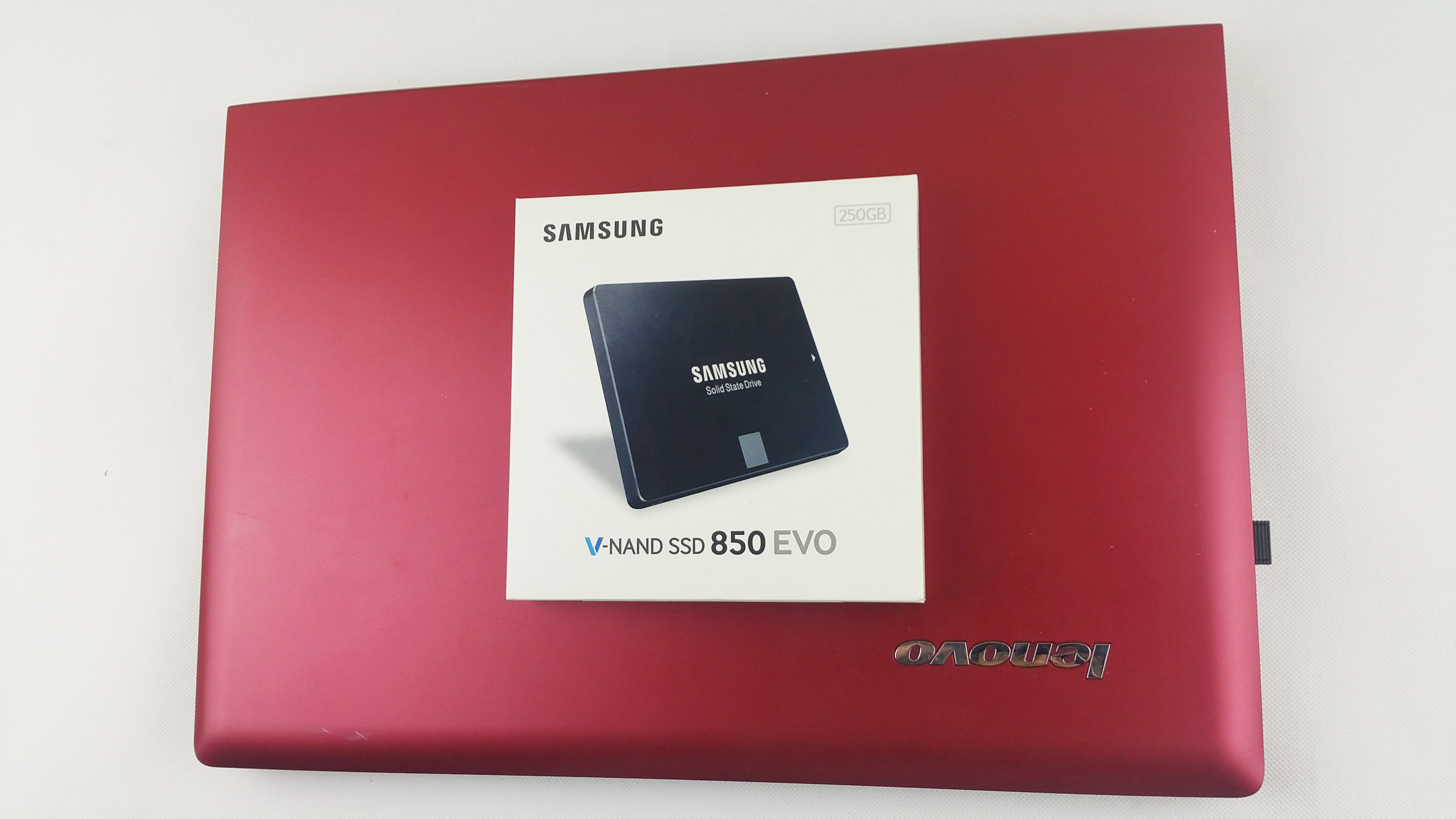 So to install the Samsung 850 Evo 250 GB is very straightforward. Most laptops can be upgraded to a different drive.

The quick video installation guide can be found here:

1 – Basically, just remove the screws from the back cover. Don’t forget to remove the battery for extra safety.
2 – Unscrew the retention bracket then slide out the old HDD. 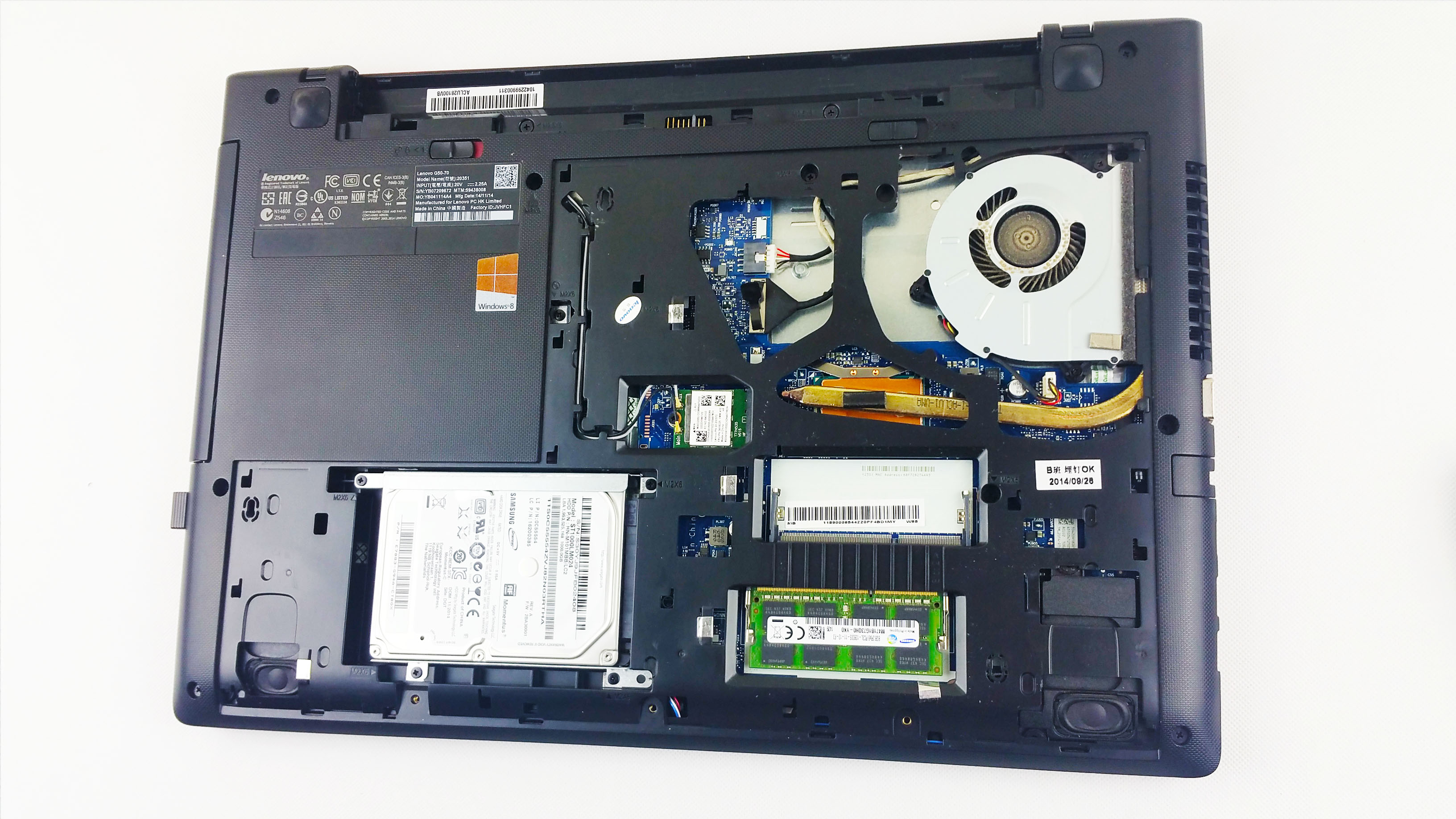 3 – Install the new SSD on the rails/bracket and then do the reverse process of the above. 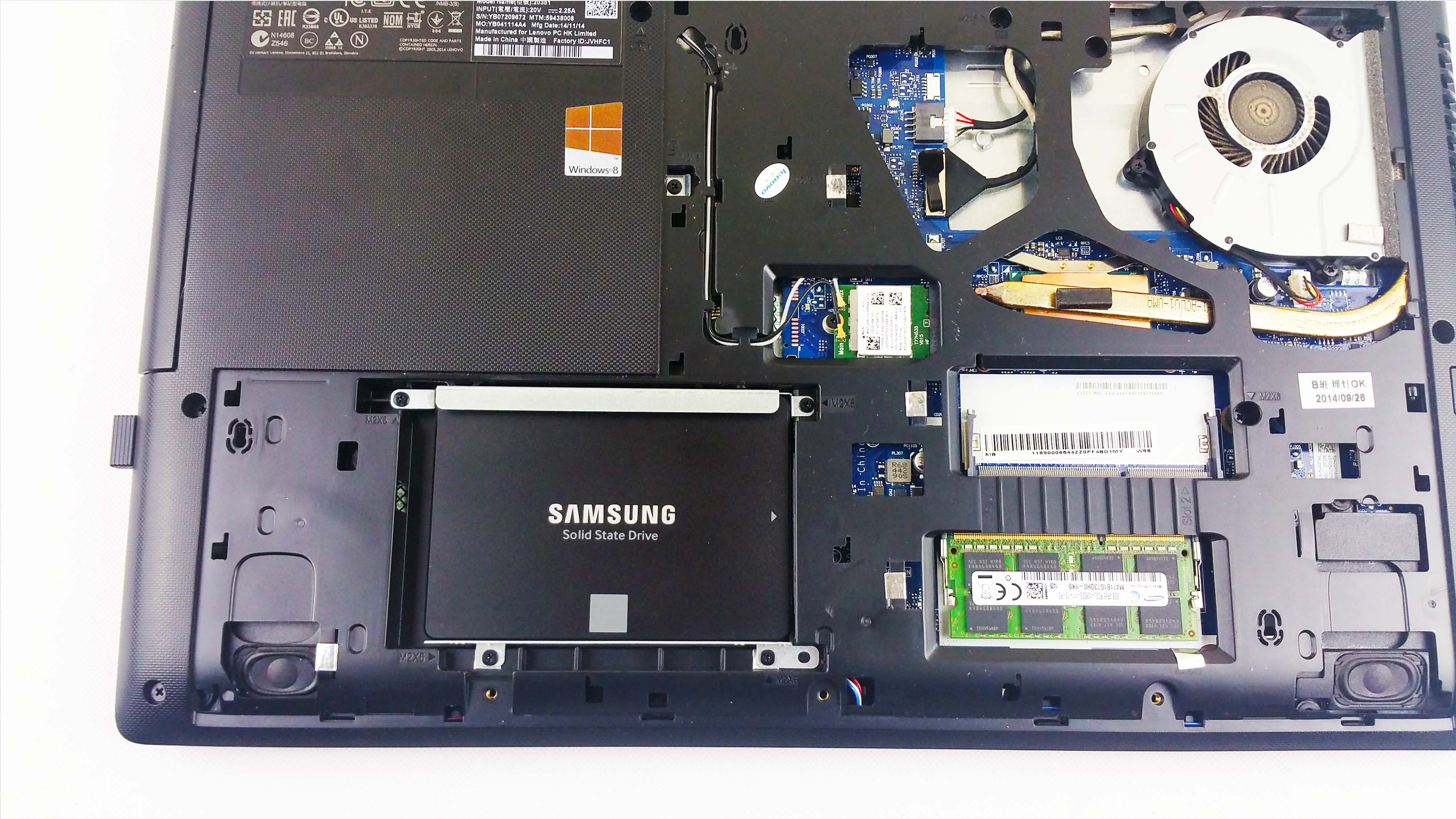 4 – Enter your bios settings – for our Lenovo G50-70 the hotkeys combo were FN+F2.
5 – Go to “Boot Options” and “Boot Mode” to “Legacy Support” from “UEFI”.
6 – While you are here go and double check if the SATA interface is set to “AHCI”. So the SSD will have all the bandwidth and not be limited.

7 – Save, restart, plug in your Windows 10 USB stick (or the desired OS) and then it should automatically detect it and boot from it thus starting the Windows installation process.

Proprietary software and very handy. In the main tab you can see useful information like the total terabytes written and check if the SSD is Genuine. Just click the “Authenticate” button. Then more info if the SSD has the AHCI mode on (good thing we double check in the BIOS, no? ) and the free space.

Is also has a built in benchmark application. The theoretical max read and write numbers are spot on but the IOPs are almost to half, so it need further tinkering. 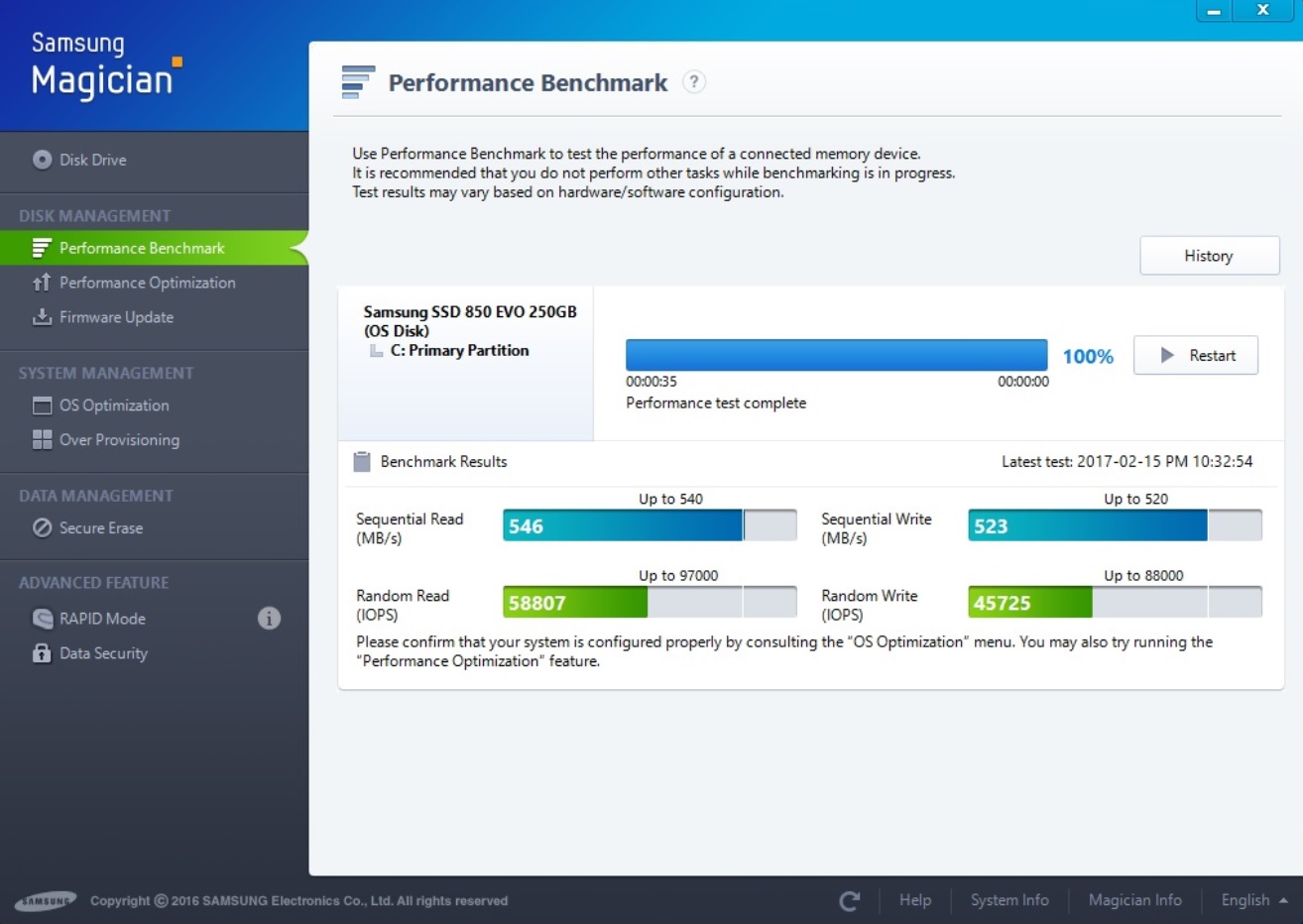 In the OS optimization tab you have more control to some of the SSD’s features. You can choose some of the profiles or can choose your what to keep or deactivate. 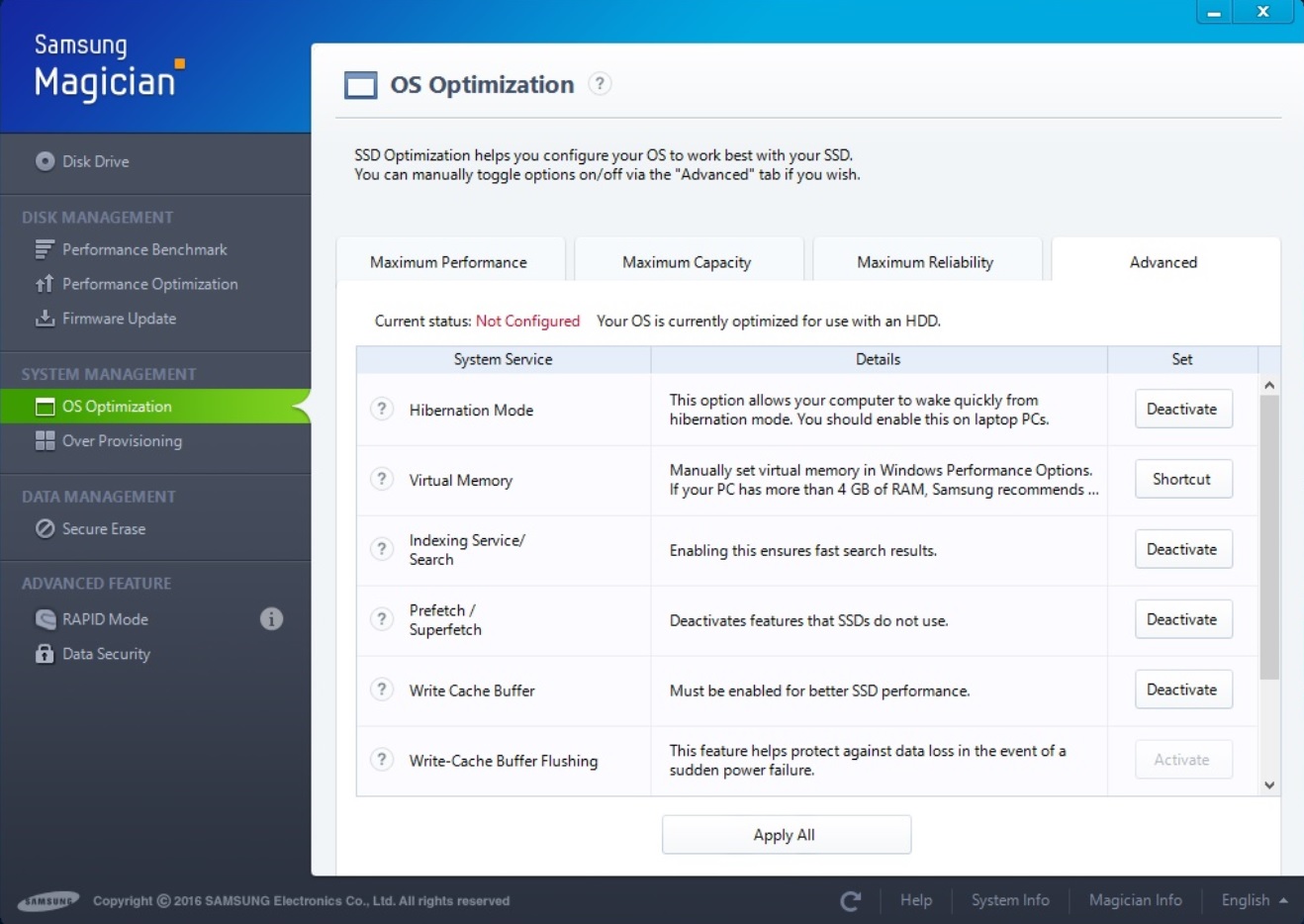 Overprovision basically guarantees free space to accomplish the NAND management tasks (GC, wear-leveling, bad block management) means the SSD does not have to waste time preparing space on demand, a process that requires additional time as data is copied, erased and recopied. An added benefitis that OP makes all of the SSD maintenance procedures more efficient, reducing the Write Amplification Factor (WAF) by ensuring there’s room to work, which improves the SSD’s lifetime. So don’t touch this. 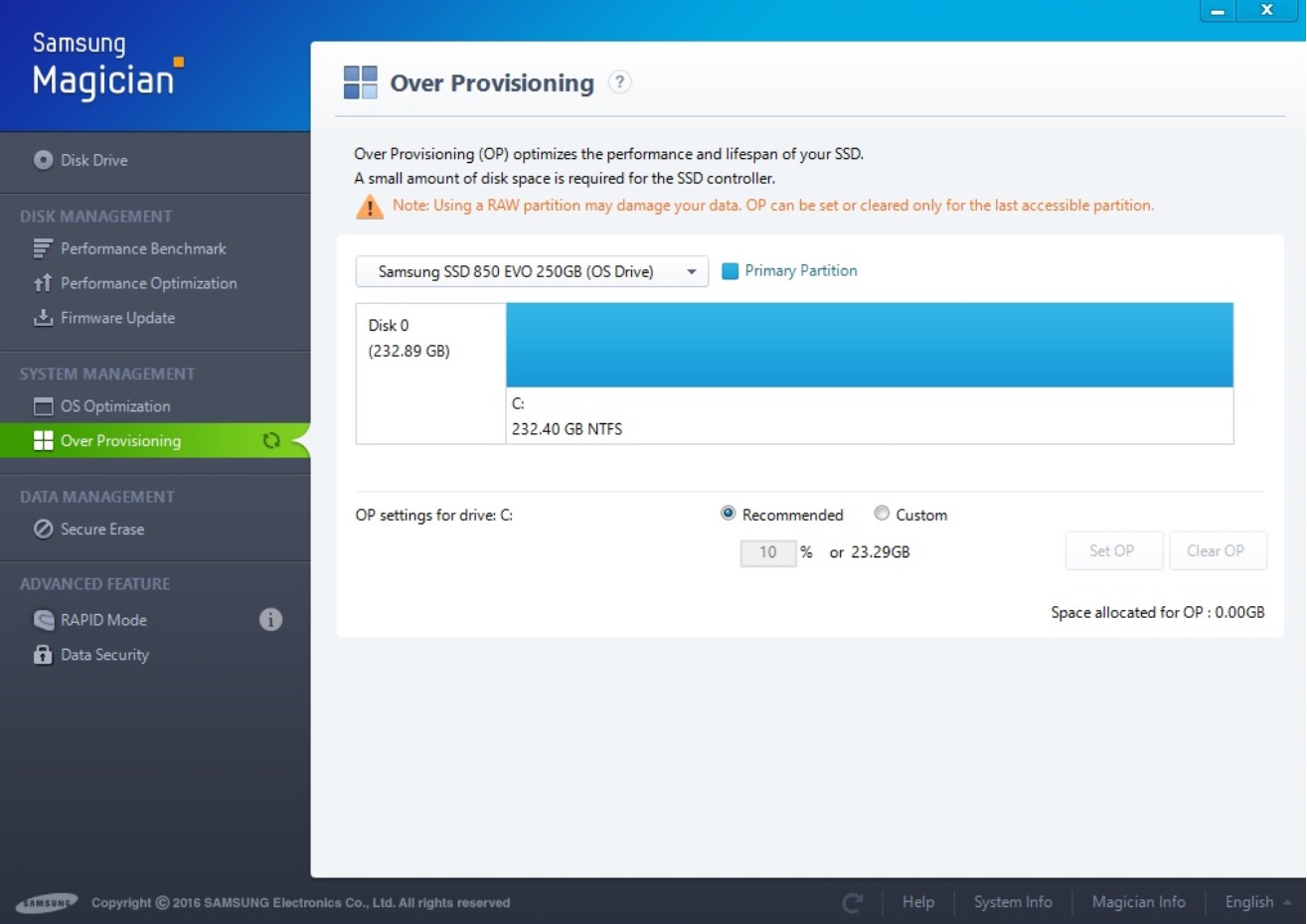 Secure Erase is self explanatory and is handy if you want to sell the drive and be absolutely sure it is “clean” and empty. 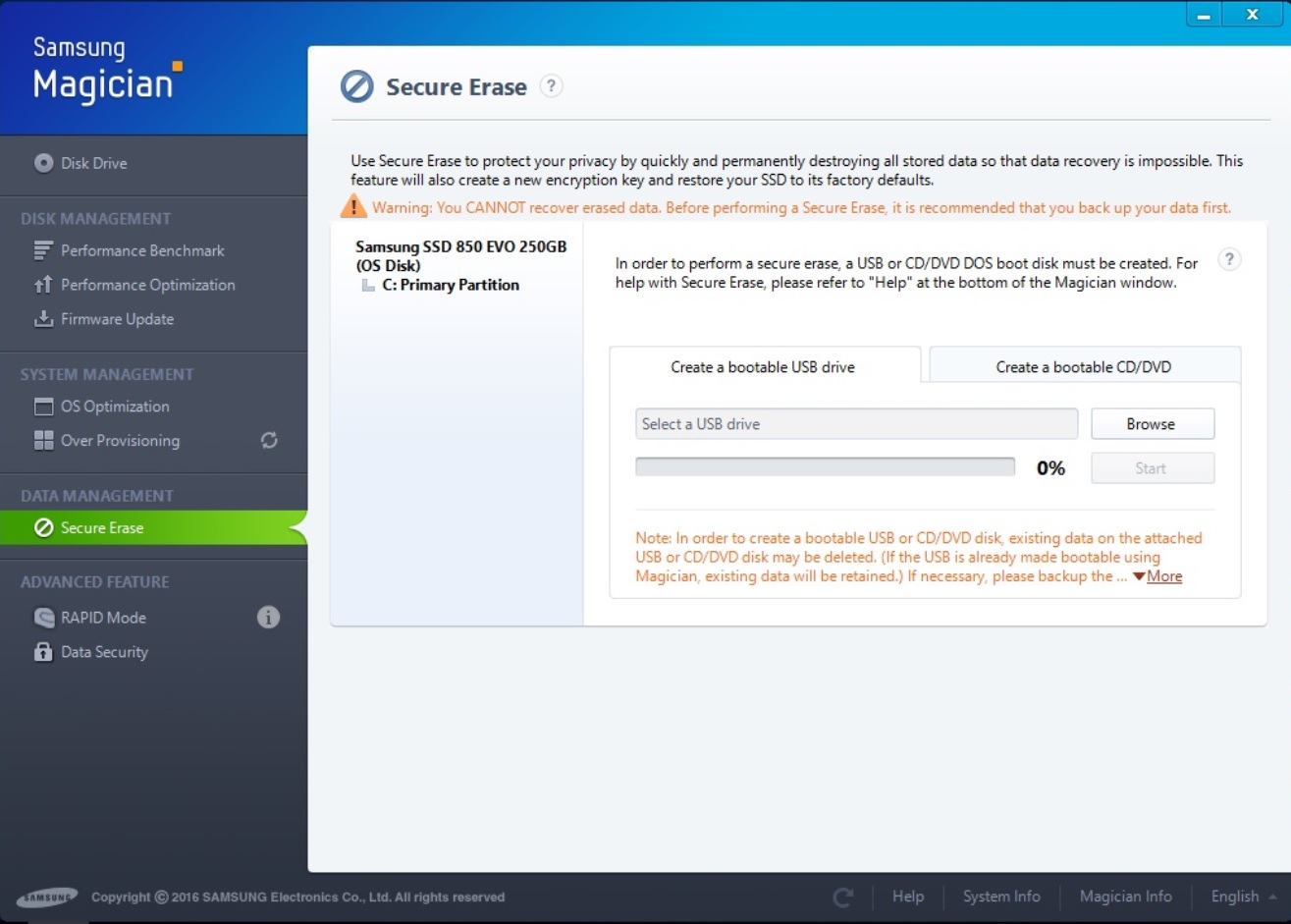 And then the rapid Mode as previously explained, it will access the RAM as temporary cache for even higher performance. 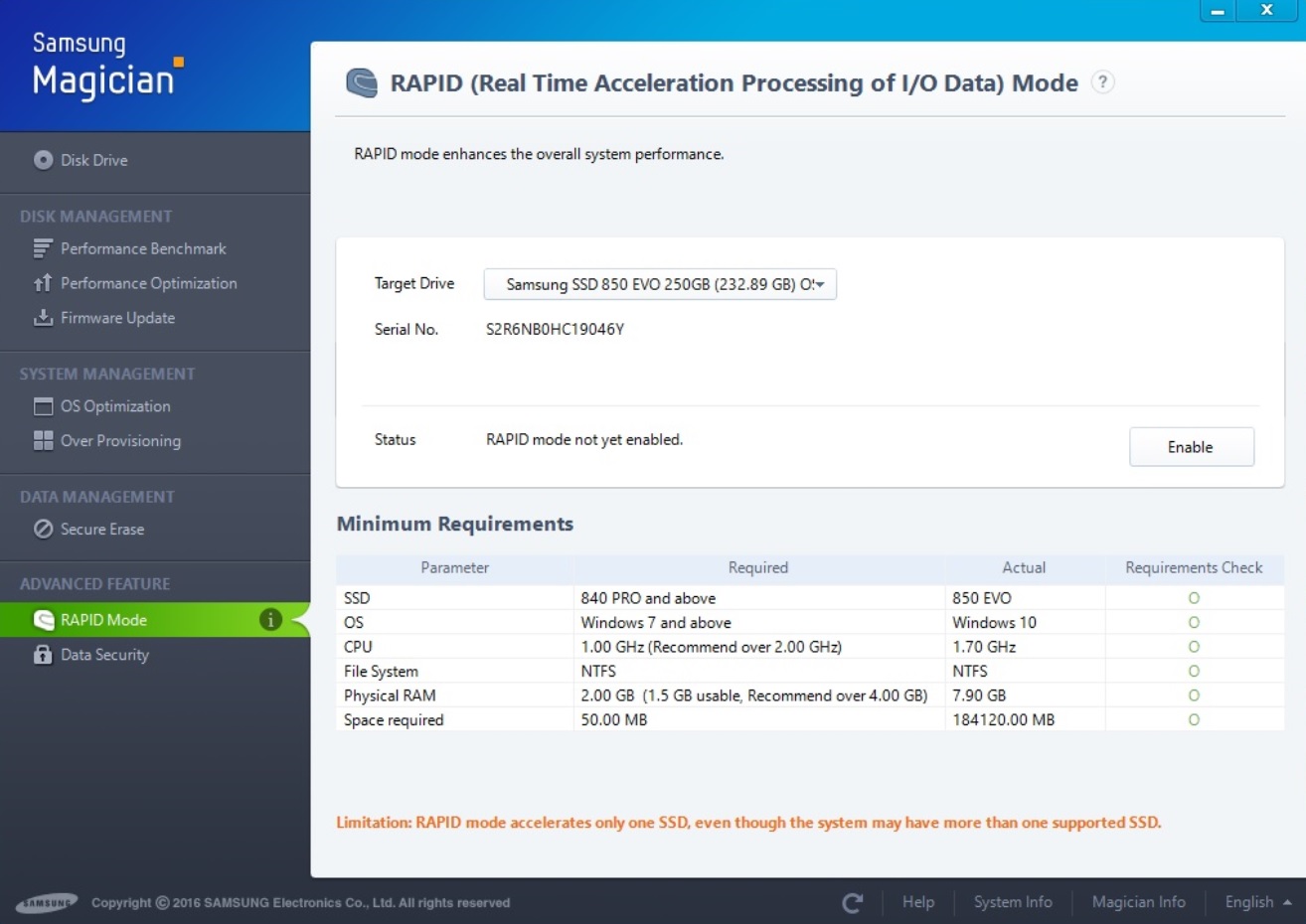 *On the left the regular HDD and on the right the Samsung 850 EVO 250 GB TLC SSD drive.

First up, we have the Crystal Disk Mark. A popular benchmark tool to see the maximum theoretical read and write speeds in various conditions.

Next up, is the ATTO Benchmark, again this will measure your storage systems performance with various transfer sizes and test lengths for reads and writes. 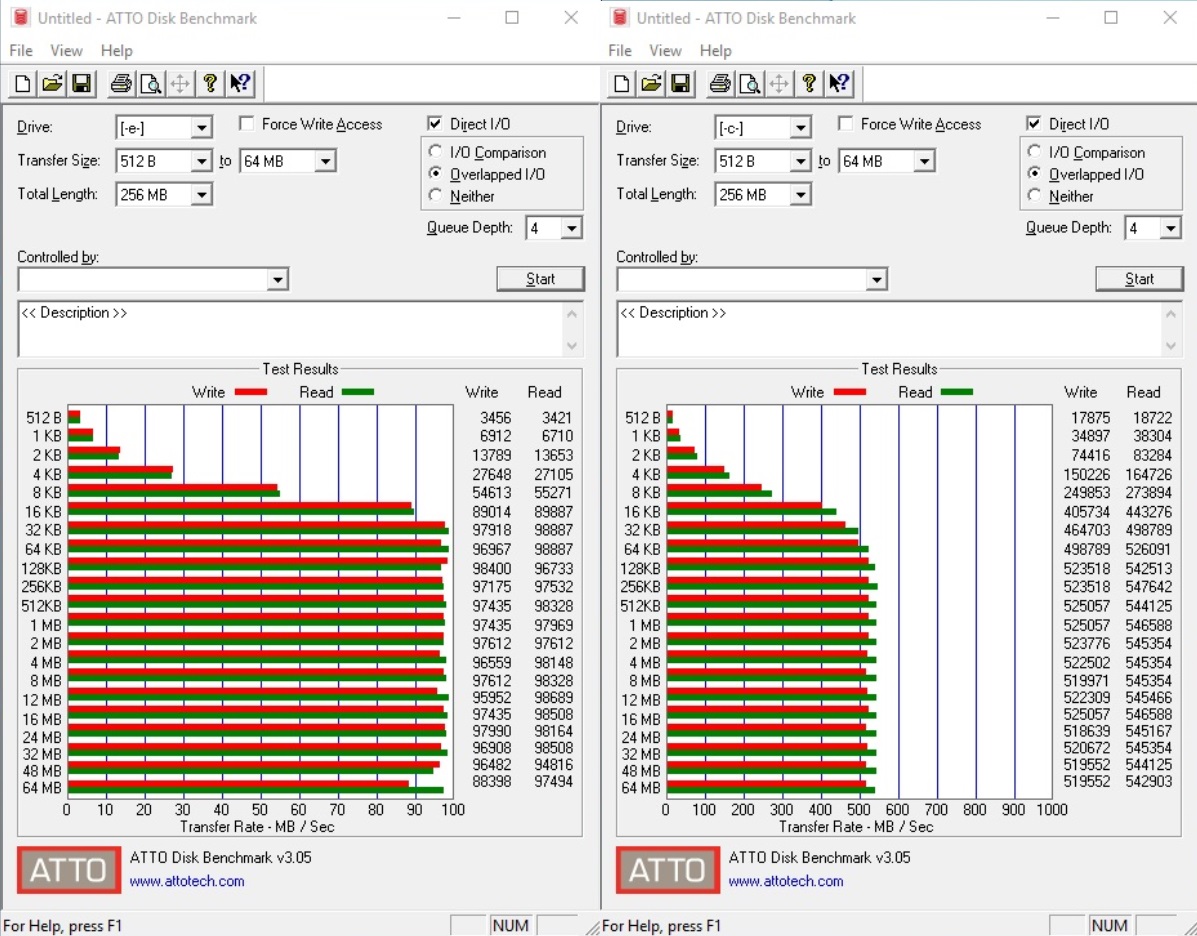 With the Anvil’s Storage application you can test the drive in a variety of benchmarking modes, plus it also has a drive endurance test simulation usage in a shorter period of time to see how the drive copes in the longer term.

Then the AS SSD benchmark will perform tests without using the operating system caches measures the time it takes to read and write a 1 GB file. It had some problems with the regular HDD, it freezes at 4k testing. So we can only share the results for the 850 EVO. 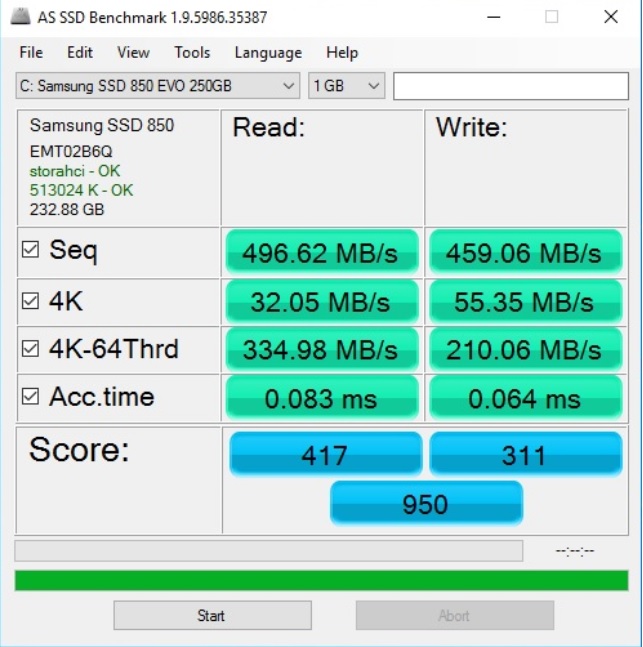 Now my preferred test – a data transfer which consists of mix files, mostly kits and .iso formats, of around 6 GB, thus a higher capacity transfer than the 3 GB of the Turbo Write’s SLC buffer to see if Samsung’s numbers are true and how much the performance will drop.

Before the buffer gets filled. All good so far. 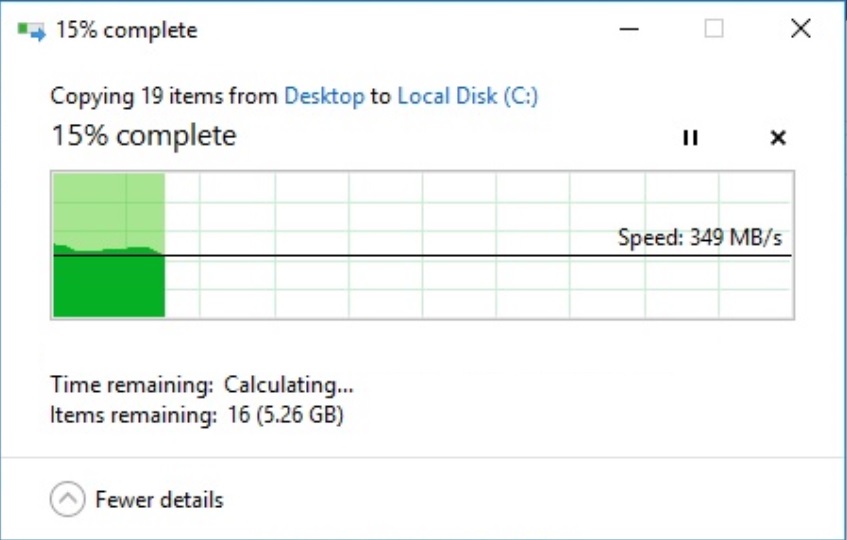 Then look how it drops after the cache is filled. Still the numbers are really good, remember in other TLC based drives that we tested the performance dropped to under HDD performance ! (under 50 MB/s write) 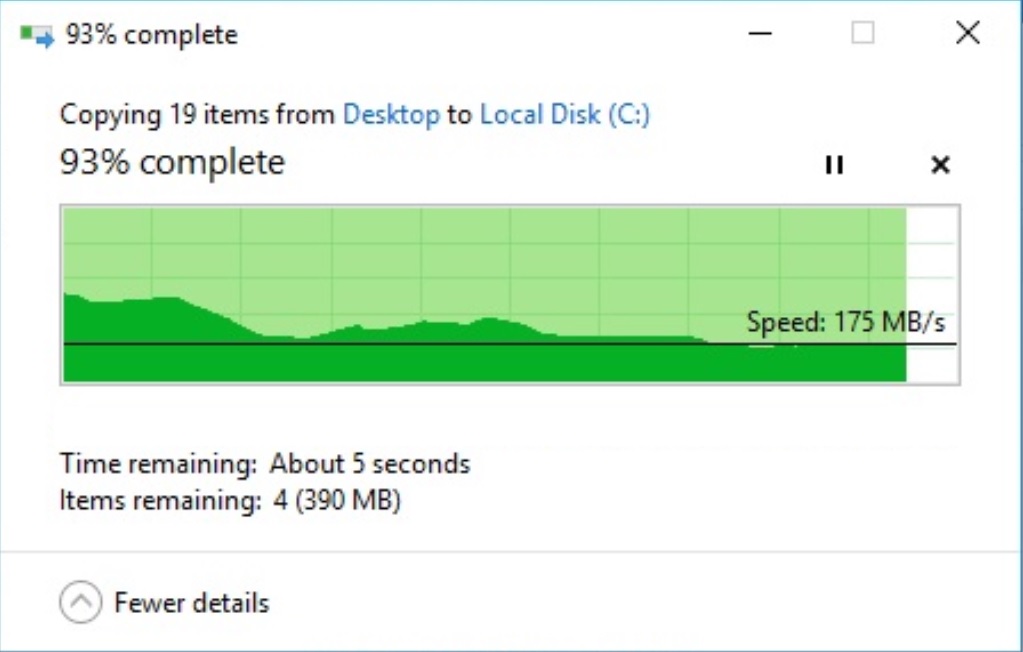 And finally the the boot up time. 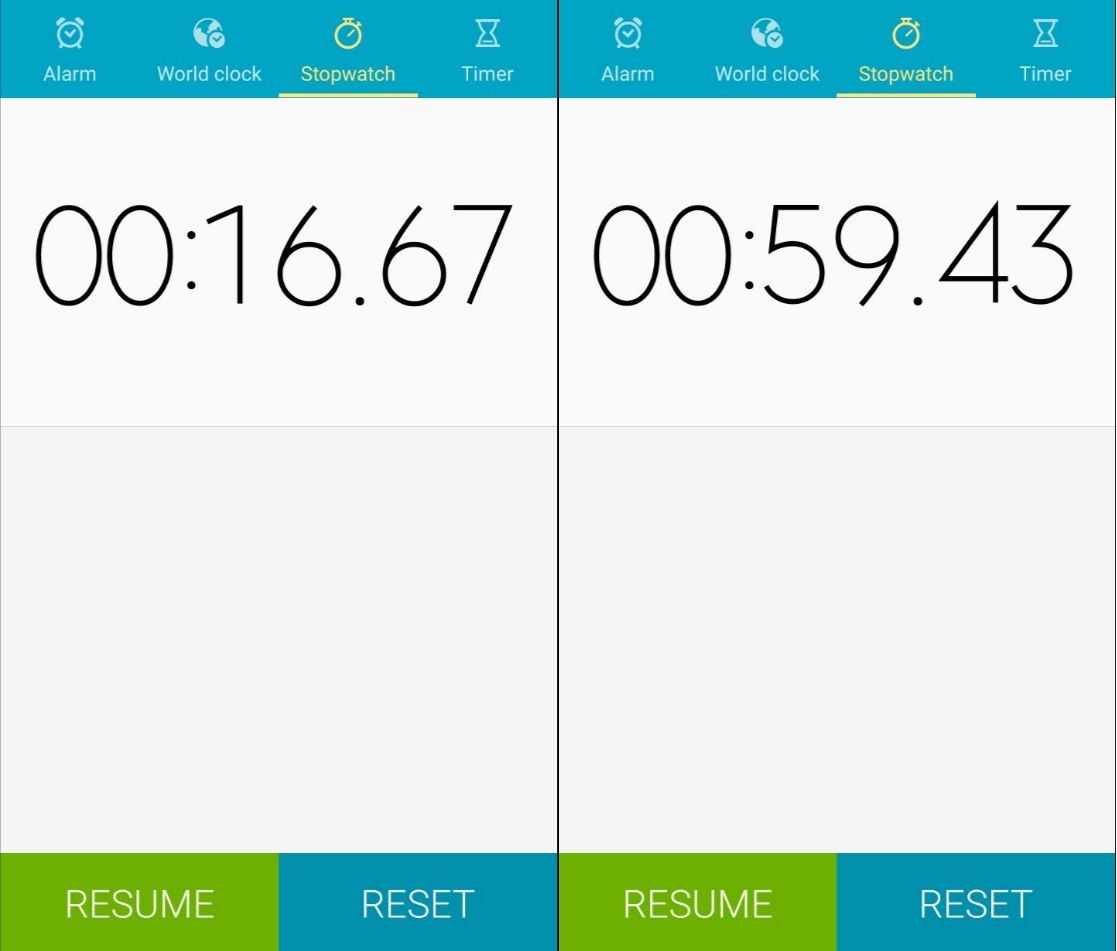 There is no need to go in depth and to compare the numbers because we are looking at least 5 to 10 times read and write performance in synthetics. There is just no comparison anymore.

The most important is the boot up times and as seen here they are at least 3-4 time faster here in favor of the Samsung 850 EVO. Also the numbers for big file transfers that exceeds the SLC cache for the Turbo Write are also very good for a TLC based SSD.

Clear winner today on all fronts for the new 850 EVO series.

These being said, the 850 Evo has a good balance between price and performance. The development 3D V-NAND TLC memory helps reduce the cost and helps keep performance ahead of budget drives. Hence this makes the 850 Evo the best mid-range SSD to date.

– Still TLC endurance levels, but for most users this should be enough