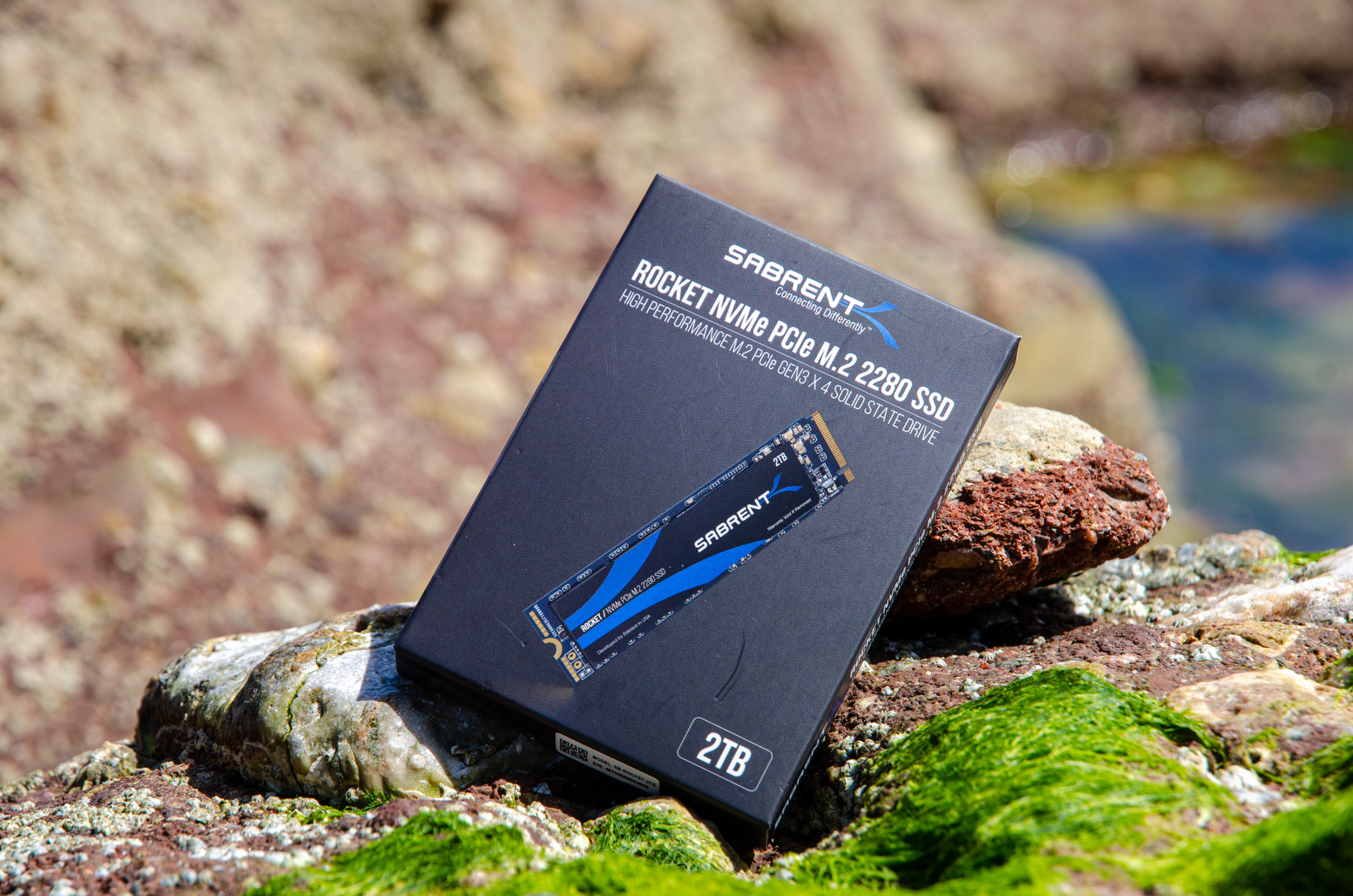 Today we are going to cover Sabrent’s TLC M.2 NVMe Gen3x4 range, a series that debuted in 2020 that still offers a great performance-to-value ratio.

The standard ‘Rocket’ series has 5 capacity options to choose from and today we have the 2TB variant to test out.

Based on Toshiba’s BiCS 3D TLC NAND Flash memory, its performance speeds can reach up to 3400 MB/s (read) and 2700 MB/s (write). Power Consumption is much lower than traditional hard drives, making it the best-embedded solution for new systems.

All NVMe SSDs from Sabrent come shipped in a small but highly protected packaging thanks to its metal inner box. They should be sealed from factory while the branding is minimal and spot on. 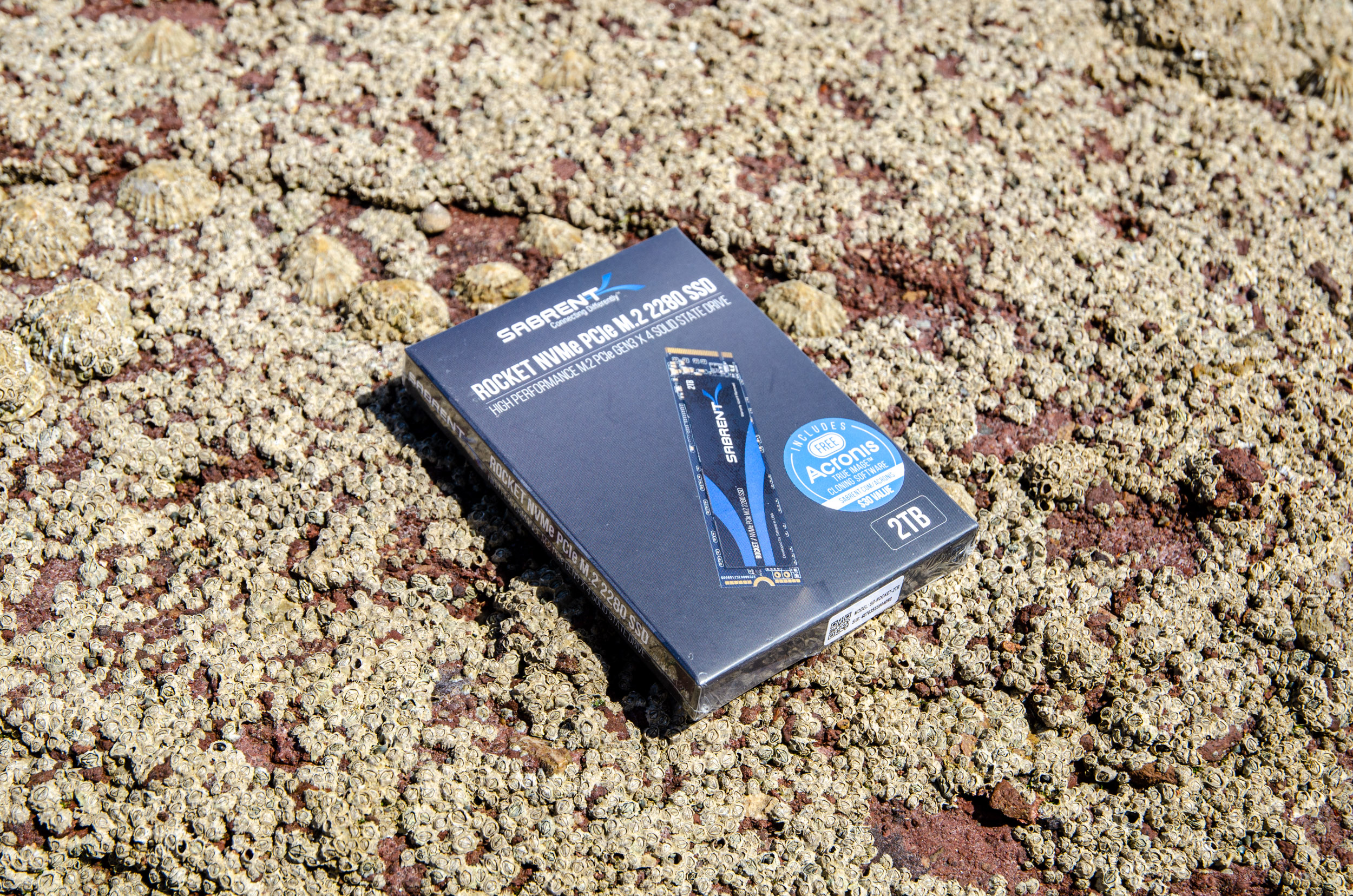 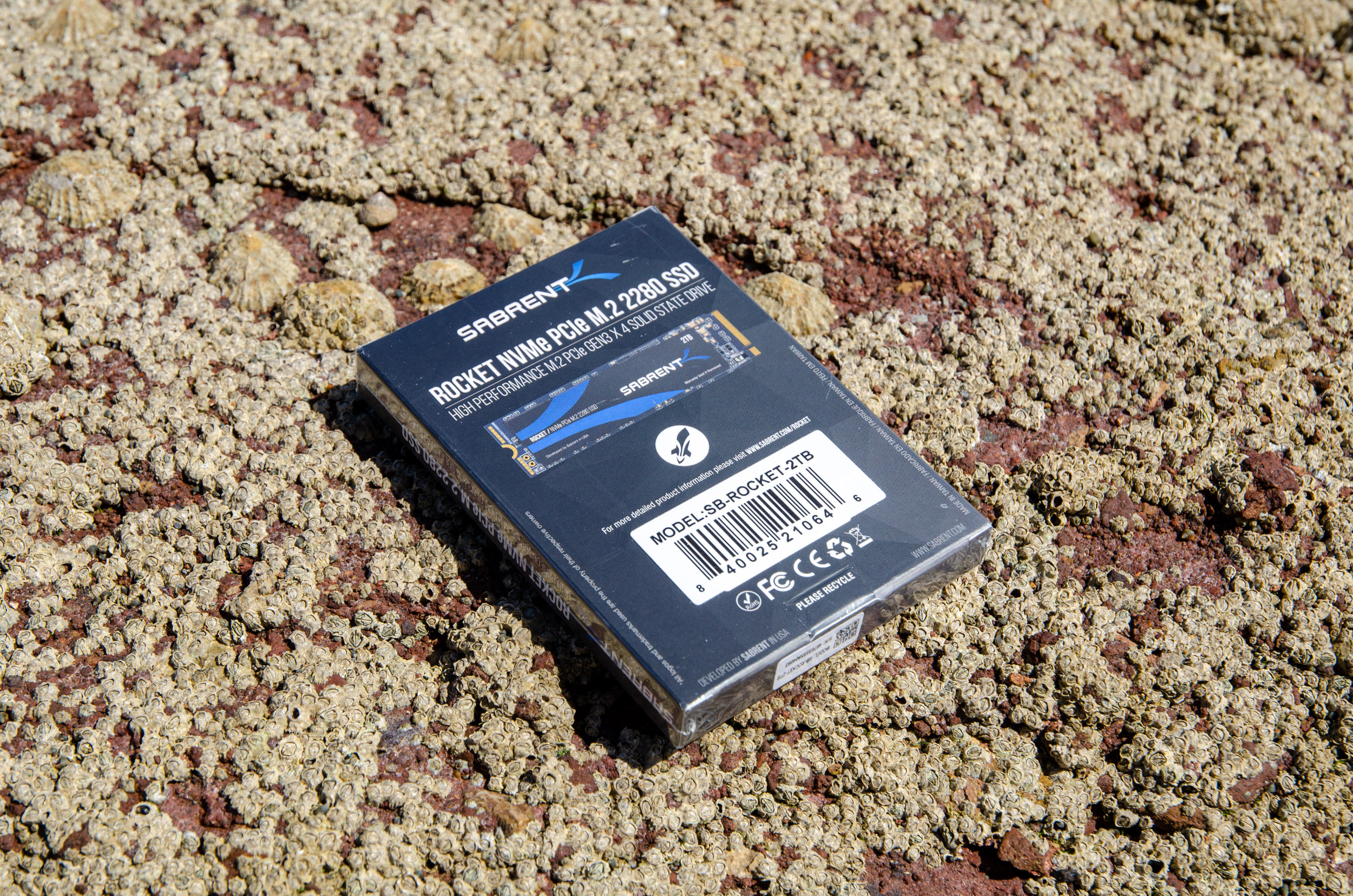 The drive is nested in the middle of Sabrent’s signature metal box and you also get a quick user’s guide. Sabrent also includes a free copy of the Acronis True Image software with all of its drives. 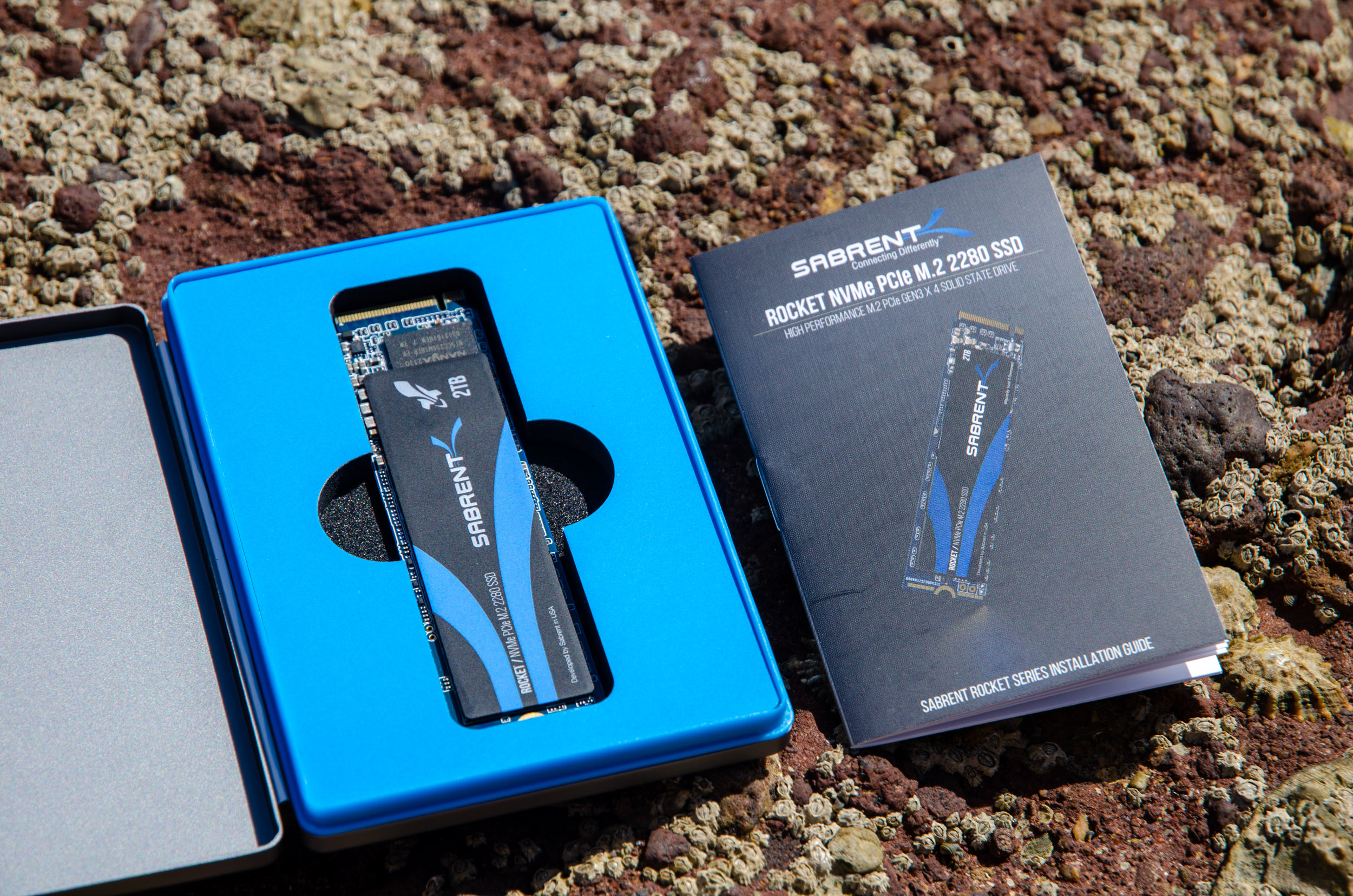 The Sabrent Rocket 2TB drive feature a blue PCB which houses a Phison E12S memory controller, 8x 256MB BiCS 96L 3D NAND TLC flash chips from Toshiba (4 on each side) and one 512MB Nanya DDR3L DRAM cache chip. All of this is covered by a thin top sticker which is laminated with a thin copper foil underneath. This is to increase the total heat capacity to prevent thermal throttling in large file transfers. 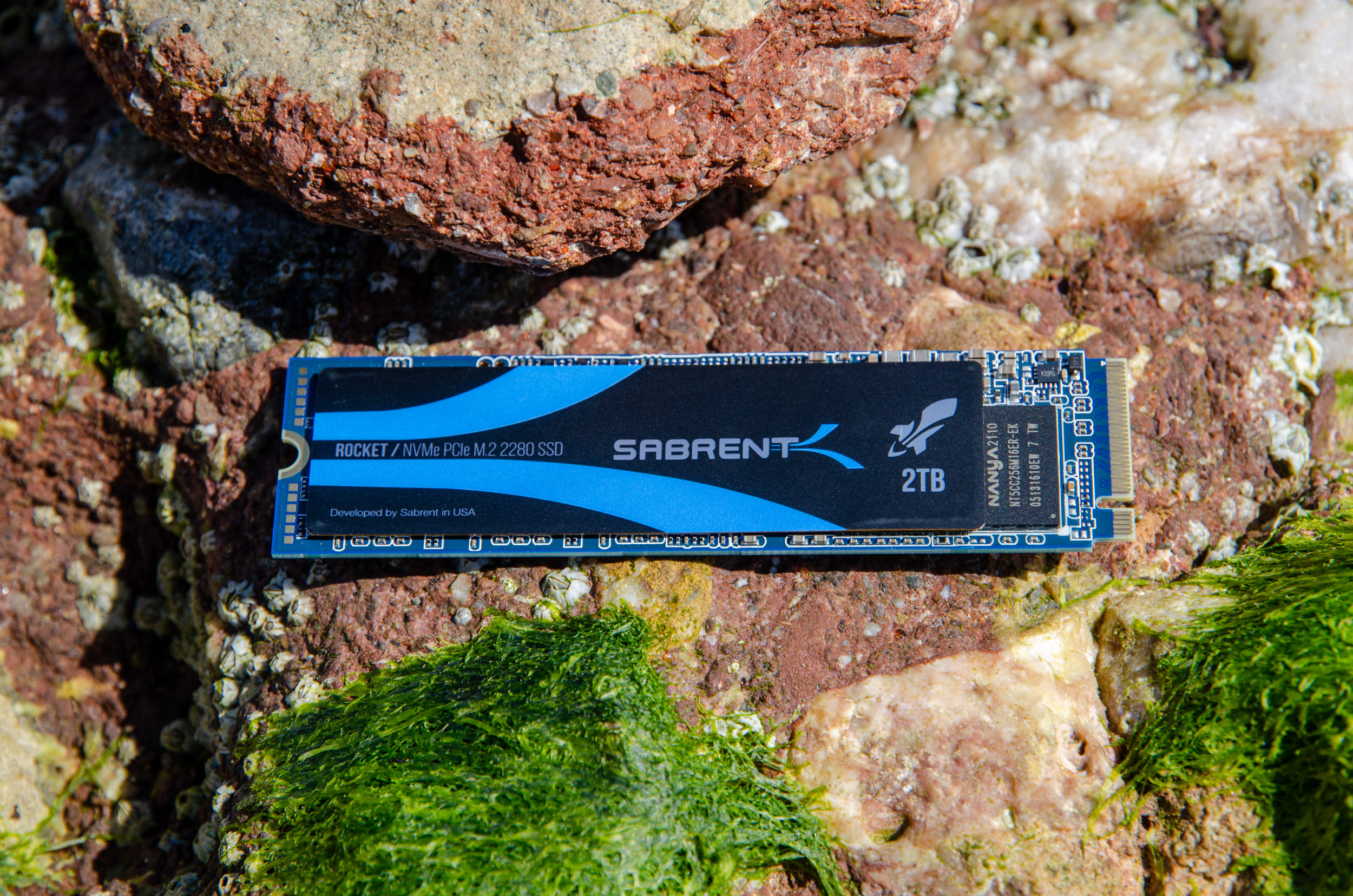 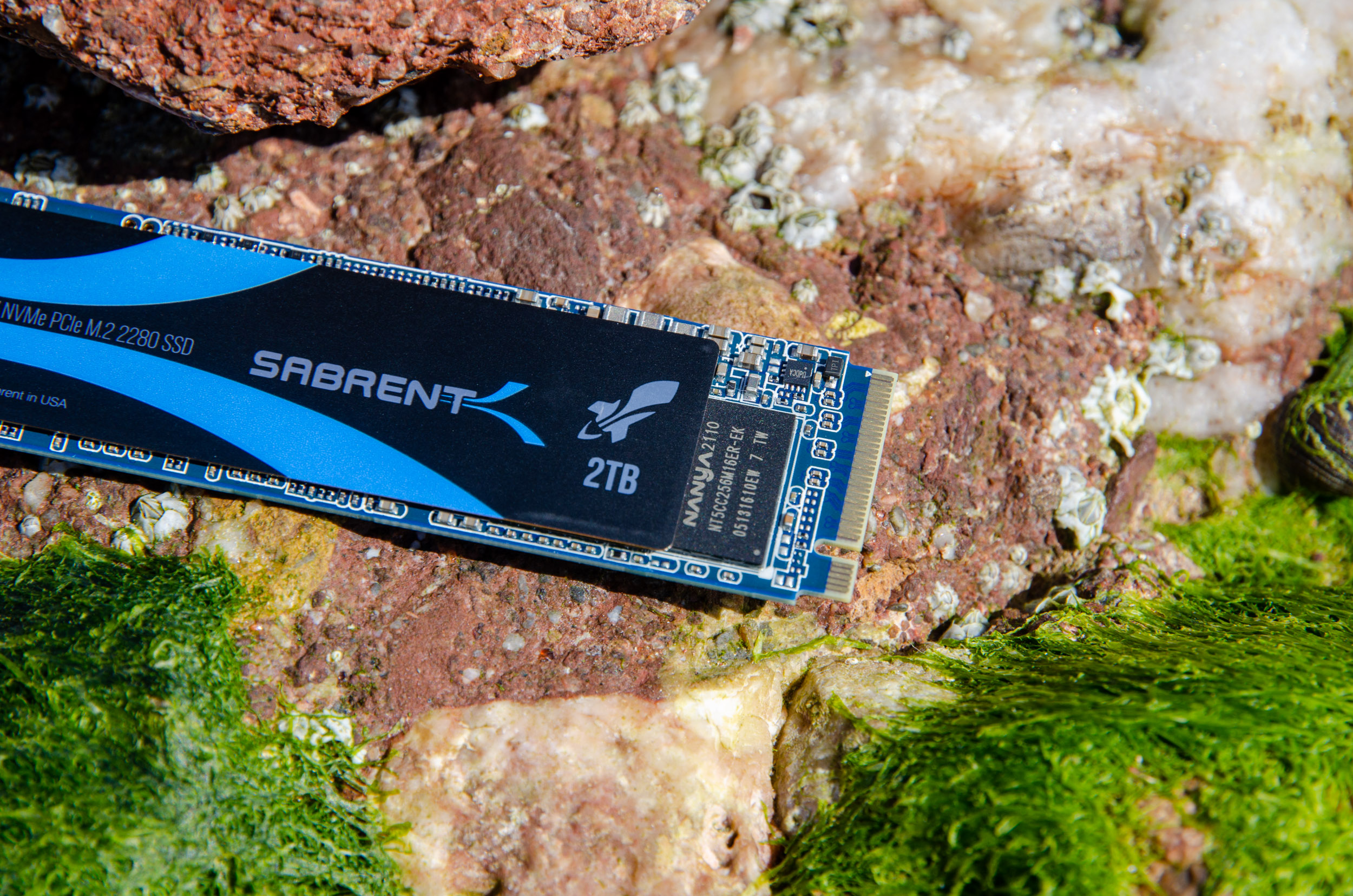 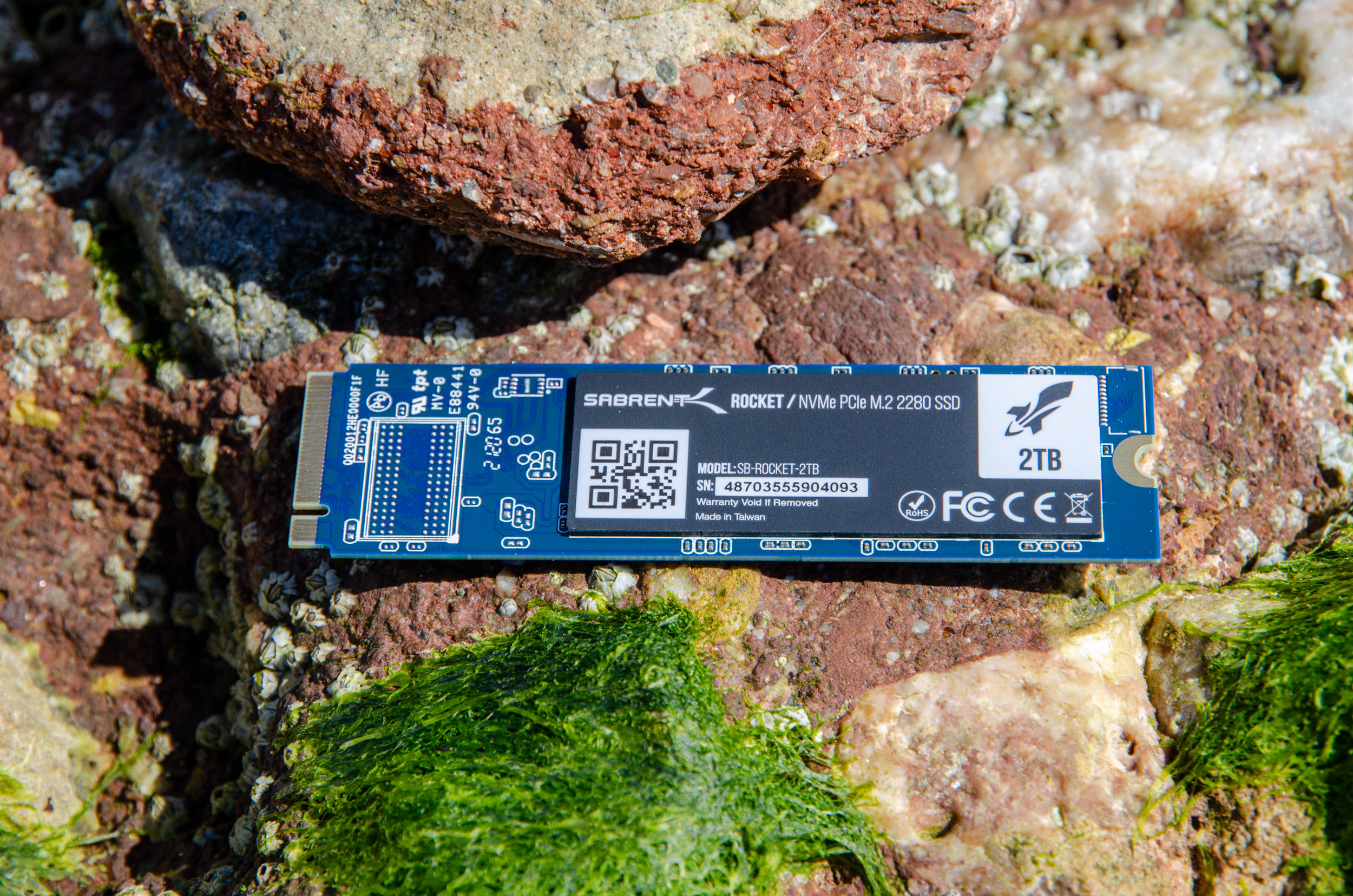 * Synthetic and real life big file transfer tests – a game folder of 108GB of mixed files and a single 15GB .mkv video file to test the burst speed and the SLC cache if present.
* All SSDs were secure-erased before our tests started
* Between tests, drives are left idle for 1 minute to allow them to flush and reorganise their internal data.
* Steps have been taken to ensure that the CPU’s power-saving features don’t interfere with any of our results. All of the CPU’s low-power states have been disabled.
* In order to minimise random variation, each of the real-life performance tests are run a few times with reboots in-between tests to reduce the impact of disk cache.
* (SATA SSDs only) Make sure you use a SATA 6Gbps capable motherboard and a matching cable to avoid bottle-necking. Then double check in the BIOS that you have the AHCI mode activated for another maximum performance tip.
* For the Gen4 x4 M.2s, you have to make sure you have a compatible motherboard that accepts and delivers the new bandwidth. Otherwise, it will work only in Gen3 x4 mode.
* All of the benchmarks for the internal drives were done with a 92mm side fan placed 2cm away and set at 60% RPM. Then the temperature scenarios and the heatsink were tested separately with an ambient temp of 24°C.
* For AMD users, make sure you update your motherboard chipset drivers from here. 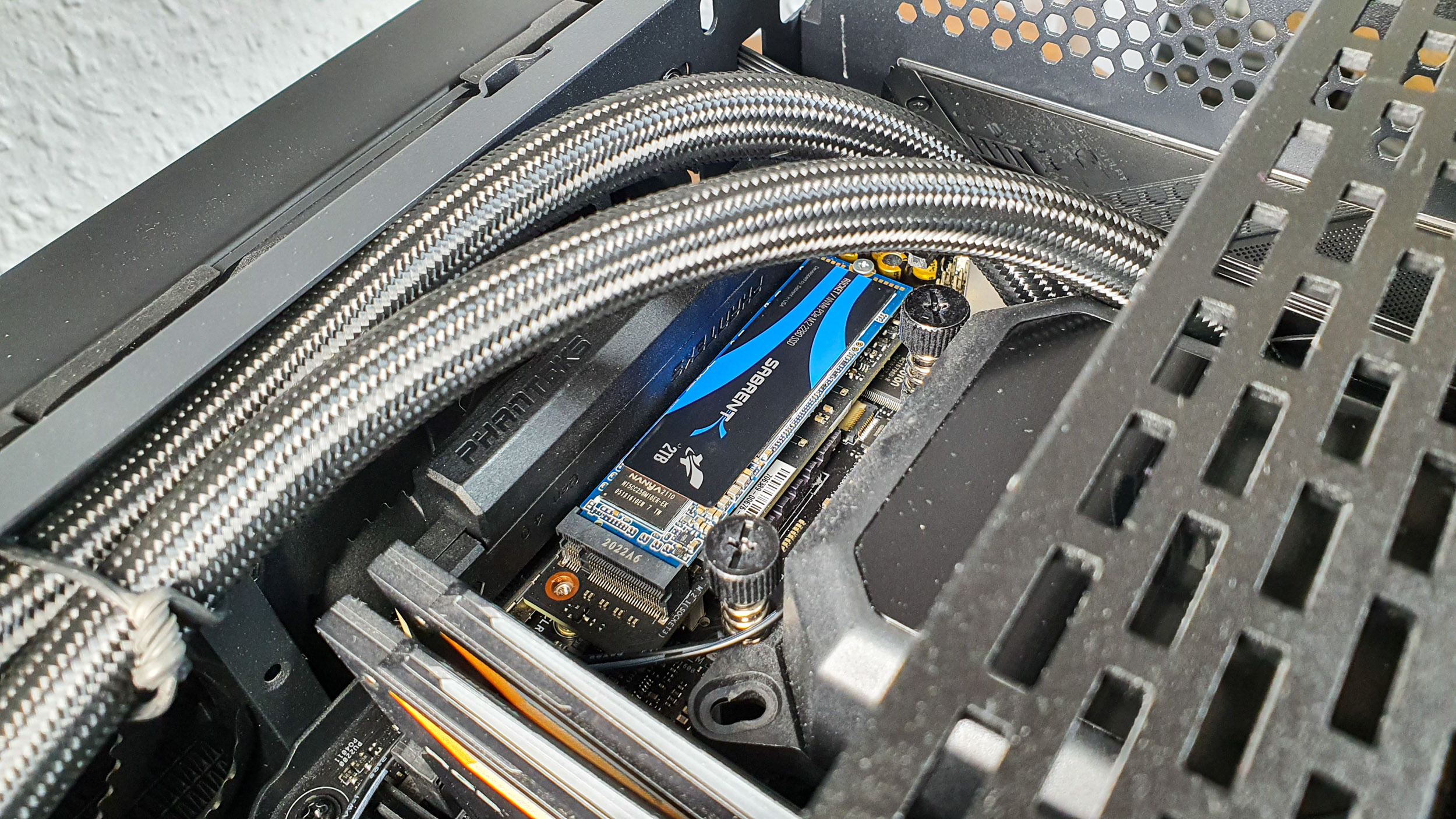 Also to mention that all Sabrent drives have their own proprietary control panel which you can download from Sabrent’s website and with its help you can check various specs and update the firmware if required. 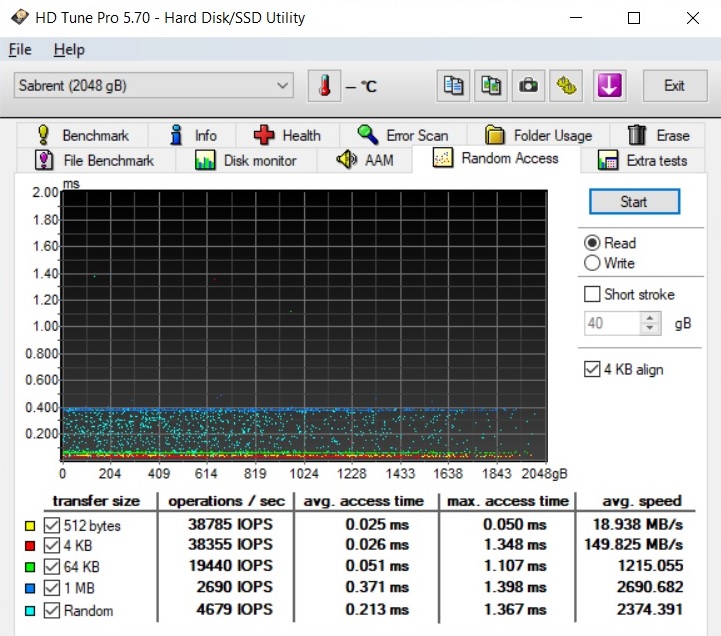 Results are really good thanks to its excellent trio of memory controller, TLC cells and DRAM cache and thus it takes the nr.1 spot on our list from the Gen 3.0 x4 category. 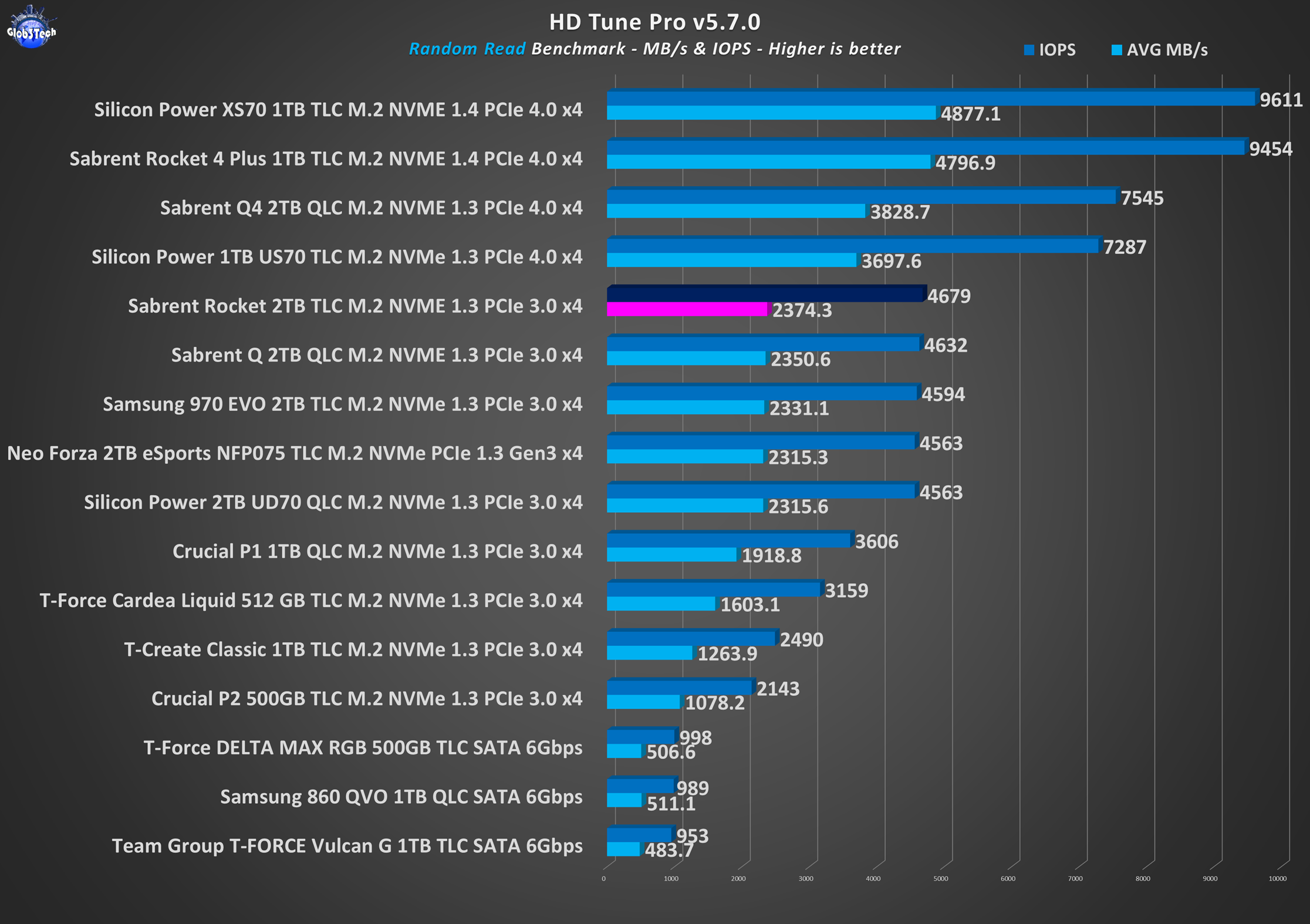 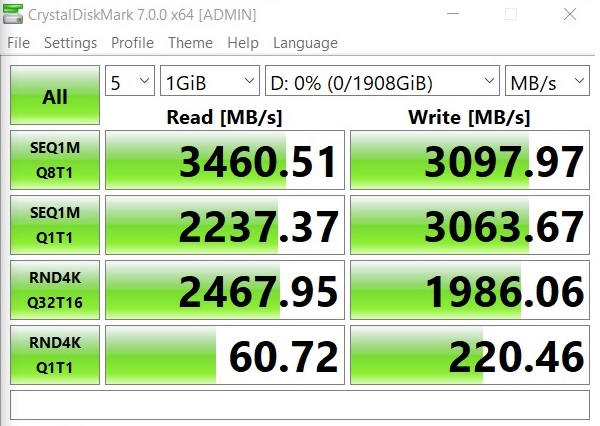 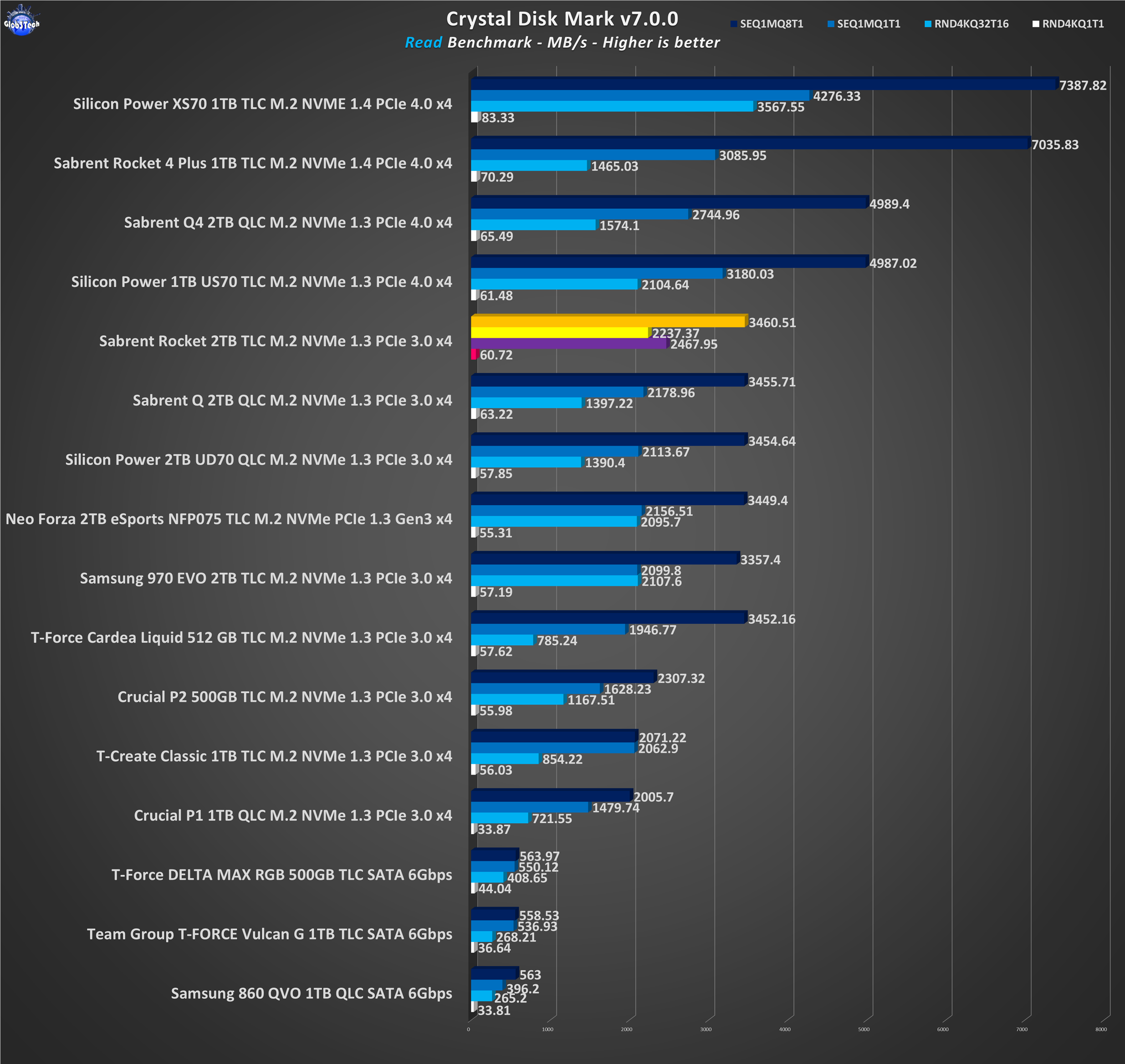 Moving to the “write” test, which is even more important in real life scenarios. Another home run of the drive in question, since it slots again under the Gen 4.0 x4 drives. 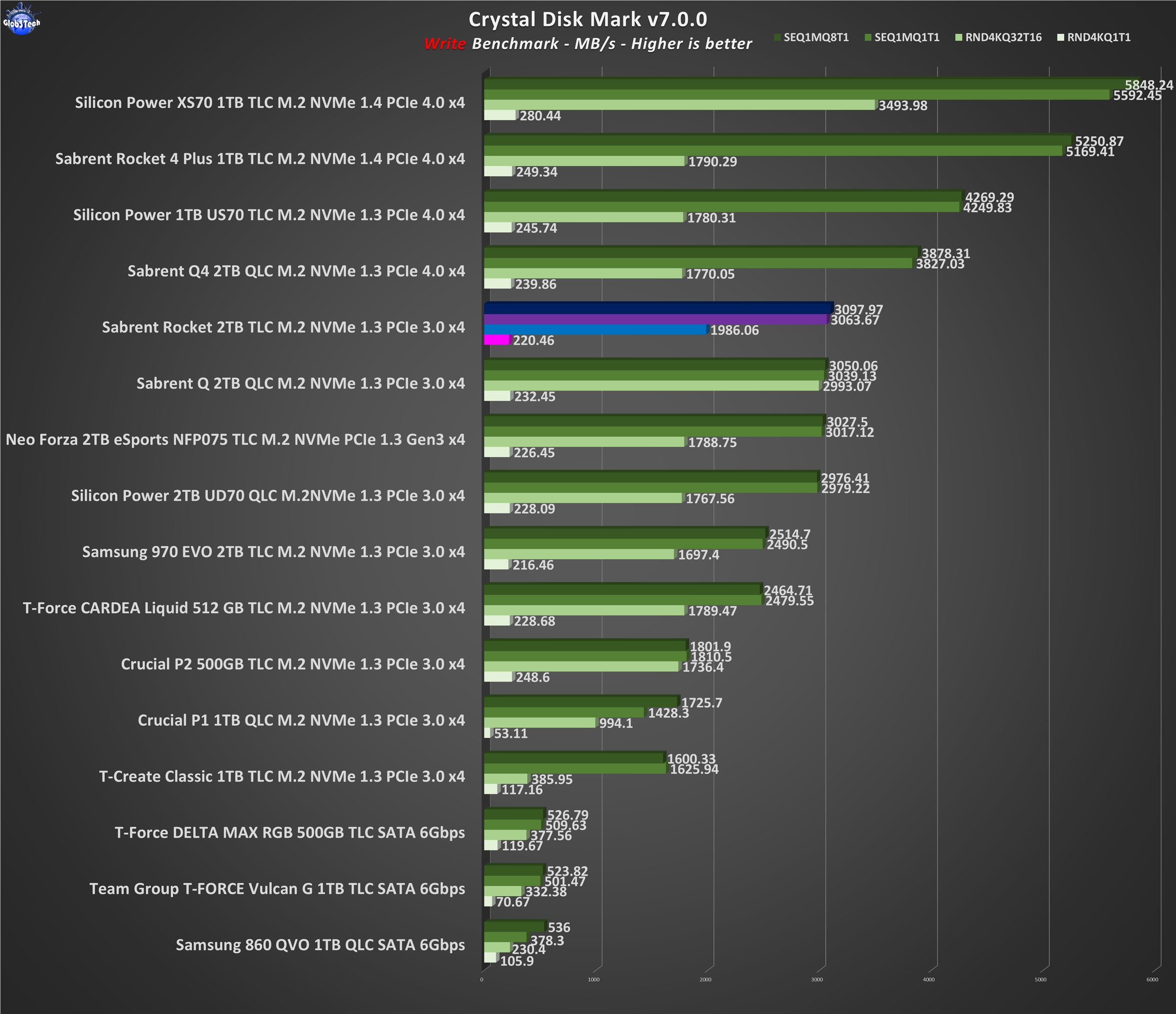 To conclude the synthetic tests, here is ATTO which is another performance measurement tool to test any manufacturers RAID controllers, storage controllers, host bus adaptors (HBAs), hard drives and SSD drives. It drops a spot but there’s nothing to worry about. 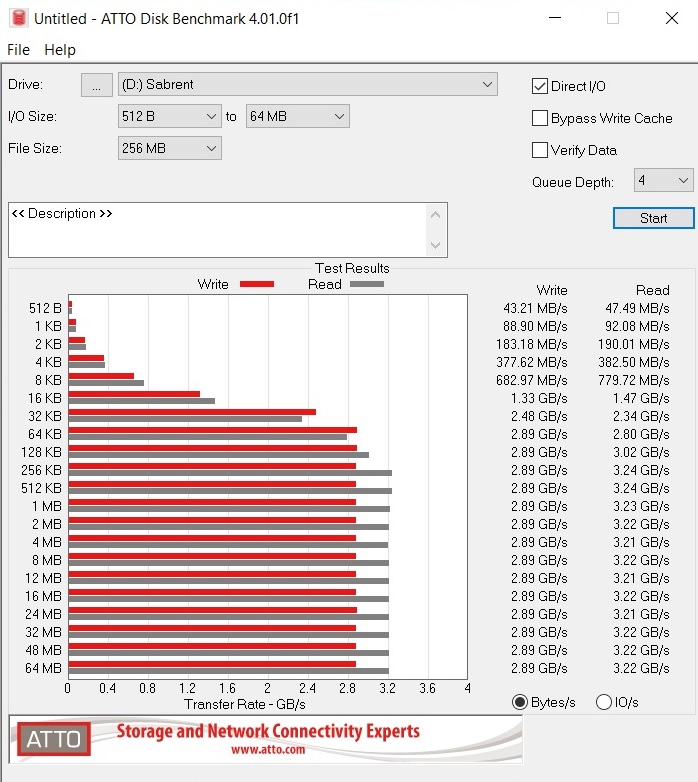 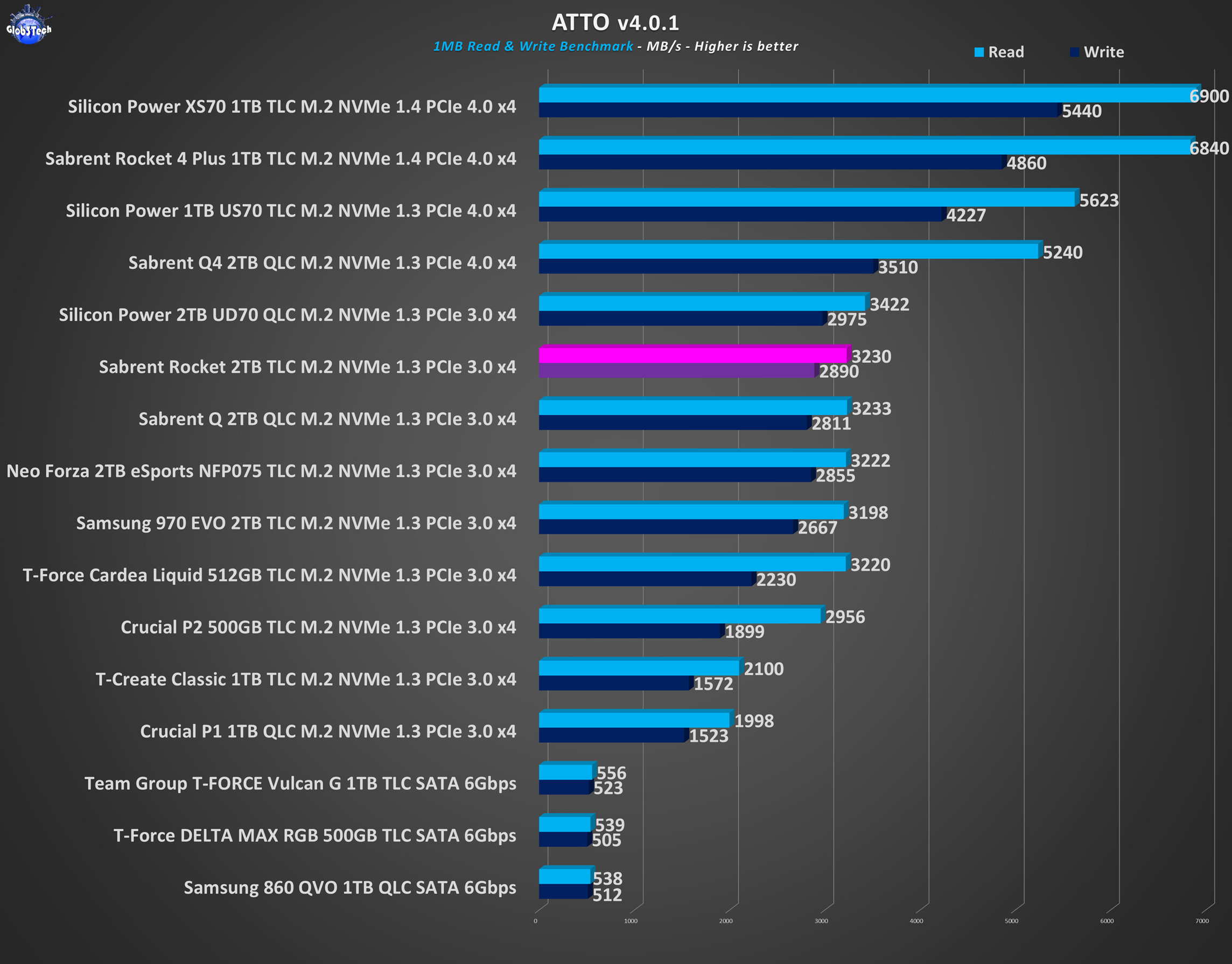 Now let’s check the level loading time for the Shadow Of The Tomb Raider game title.

The final practical test revolves around some real life copy tests. Firstly, we will copy to the SSD a single 15GB .mkv video file to test the burst speed followed by a copy of the same file, from the SSD onto itself. Then the same process is repeated but with a big 108GB installation folder from the Assassin’s Creed Valhalla game.

For the burst single file test, the drive struggled a bit in the copy to itself transfer but still writing at its native TLC speeds is nothing to worry about.

Usually, most QLC/TLC based M.2s at 1TB/2TB in size will exhaust their SLC cache and then write at their native NAND speeds. This SLC cache rarely approaches 80GB in size, hence our test of 108GB. However, the Rocket 2TB drives has around 30GB of SLC cache and thus after that is filled up, it will write at its native TLC speeds, a ‘dip’ that you can see onscreen as well.

Now let’s inspect the operating temps especially in a small form factor build enclosure. Thus below we have a benchmark run in Crystal Disk Mark for 2 different scenarios in the following order:

1) No side fan/airflow/extra heatsink – The Sabrent Rocket 2TB barely thermal throttles despite reaching 73°C in the benchmark run.

2) Side fan @ 60% RPM – The extra airflow makes a significant impact so we shave off exactly 17°C of the peak recorded temperature and as you can see, the benchmark results are 90% the same.

Despite being the ‘veteran’ in Sabrent’s NVMe line-up, the Rocket series has earned its place because of its great overall performance-to-value ratio. Spec wise it has a winning formula thanks to the Phison controller and TLC cells that just delivers what you need and expect for the Gen 3.0 x4 bandwidth. So far, it even managed to surpass newer drives on our test charts. The only negatives per say come from its double sided construction which might put you off if you want this drive for ultra-slim notebooks and the small SLC cache, given its fairly large capacity. All in all, the Sabrent Rocket still has a say in today’s SSD market.

– Small SLC cache
– Double sided, so it will not fit some ultra-slim notebooks

Glob3trotters “Highly Recommend” Award 5 out of 5

A lot of thanks to Sabrent for supplying us with this great drive!