Very exciting day.
In for testing and review, we have a package from ((( Noiseblocker ))) ® .
In it we discovered 5 types of fans from their offer.
Basically the most powerful with PWM from almost each category.

And that orange line represents and i quote from their site:

25 dB(A) – H461Limit for industrial worknoise at night within Germany according to VDI-Richtlinie 2058 (H460Association of German Engineers guideline) and TA Lärm (technical regulation about noise) according to § 48 of Bundesimissionsschutzgesetzes (BImSchG) (German Federal Imission Protection Law).

First, about the brand.

The boxes look very nice and appealing, here at Glob3trotters we love the attention to detail and we see that from the very beginning with Noisebloker, the technical specification on the back for example, are one of the most complete we’ve ever seen.

Let’s open them up.

First impression is WOW !
Especially the eLOOP and Multiframe.
Very good feeling, sturdy, a lot of antivibration technology and the general sense of quality all around. 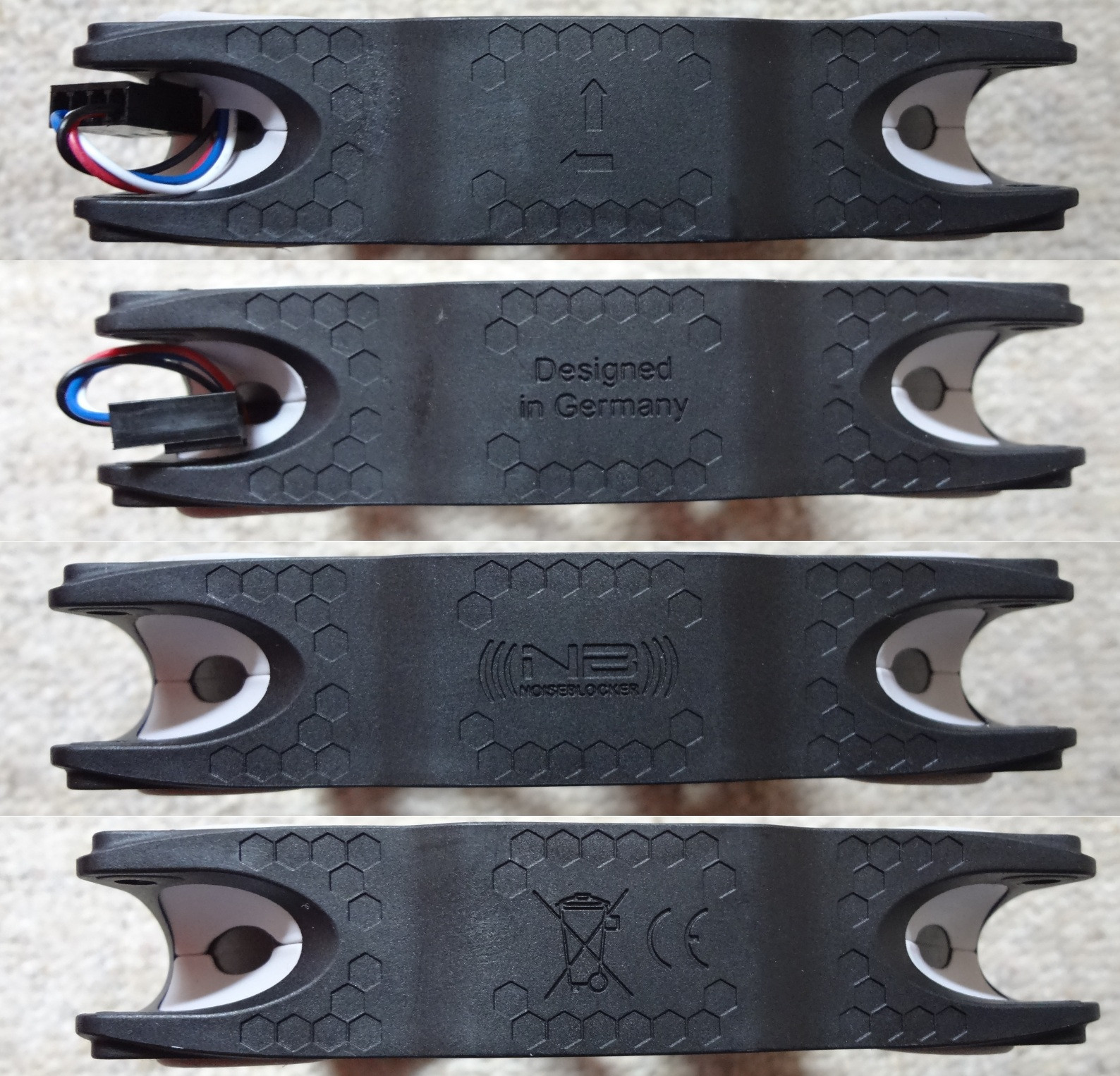 The first and very interesting thing we noticed about the Bionic eLOOP series is that it was developed and patented by Dr. Rudolf Bannasch and sponsored by the German Federal Ministry of Economics and Technology.

Then another thing that makes the eLOOP unique is that it has a continuous blade design.

Again the attention to details is everywhere, including the bundled accessories that are complete for any scenario, with sleeved modular cables and even you can choose between a short one (22,5 mm) and a long one (51,5) or just combine them for extra length.
We also like options so another plus goes here. 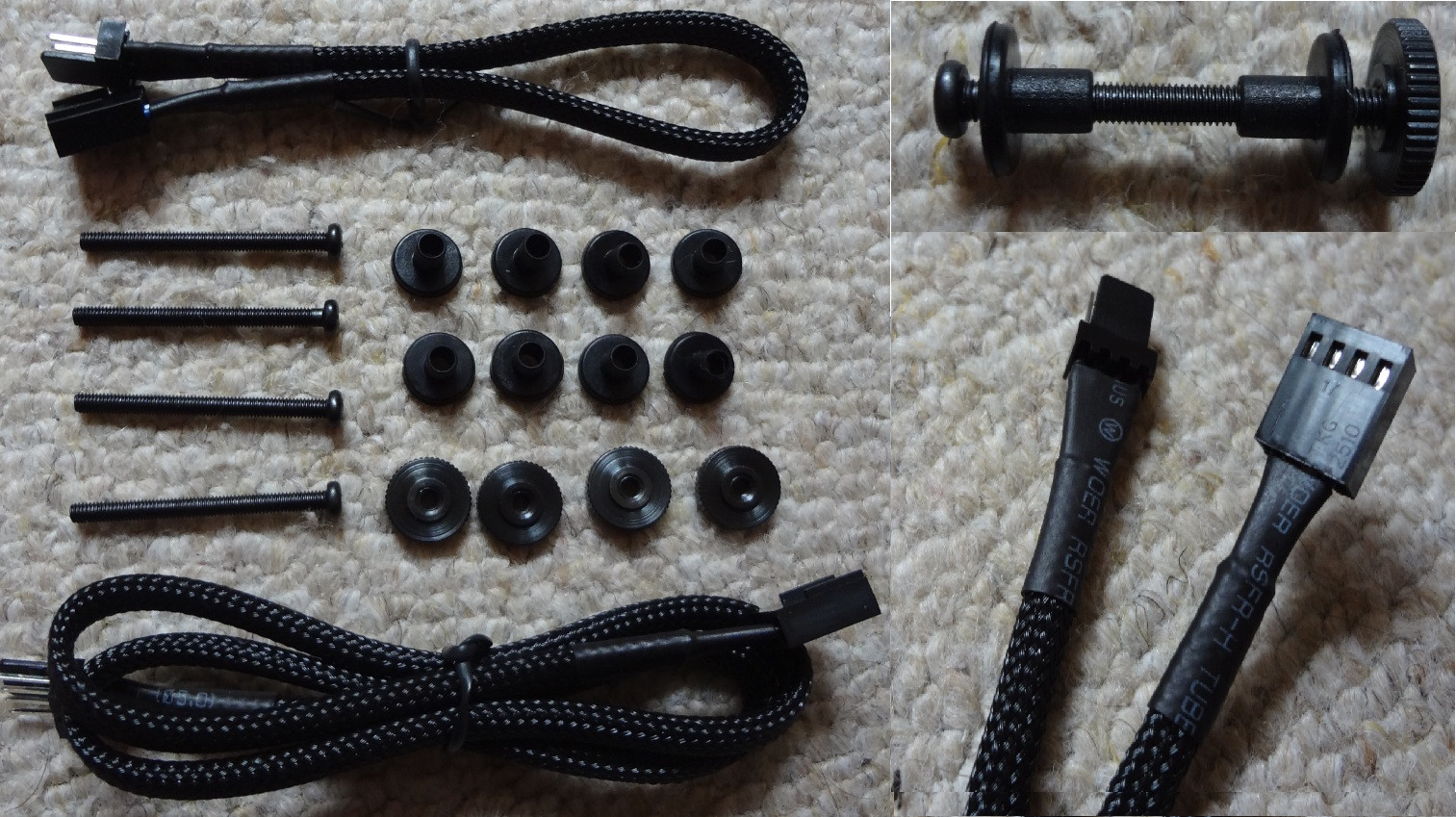 This one is also unique in its modular frame design, very effective anti vibration method.

If that wasn’t enough, it comes with an anti-vibration outer silicon gasket, for example, when you want to use the fan on a heatsink and/or case, radiators etc.
The M12-P has a non removable cable ~ 50 cm in length with the same high quality sleeve.

Finally, we move to the Black Silent Pro fans.

More standard design, but still with all the accessories and high quality like the others.

Very impressed with what we’ve seen so far.
So let’s see if they perform as well as their presentation.
Gentlemen, start your engines.

– We removed the video card plus our PSU has semifanless action so that we removed virtually any other sources of sound, to leave only the Noiseblocker fans running for optimal testing. Then we used the 120 mm ones on our Thermalright AXP-100R CPU heatsink to see if any turbulence will occur.

– Regarding airflow we used an anemometer – Mastech MS6252A (we will include +/- 6-11 % margin for error) – positioned 15 cm away from the fan and in between we use an improved cardboard tubing also in diameter of 120 mm to channel all the airflow as straight as possible (used also for the small fans). The results were recorded in CFM.

And these are the results. 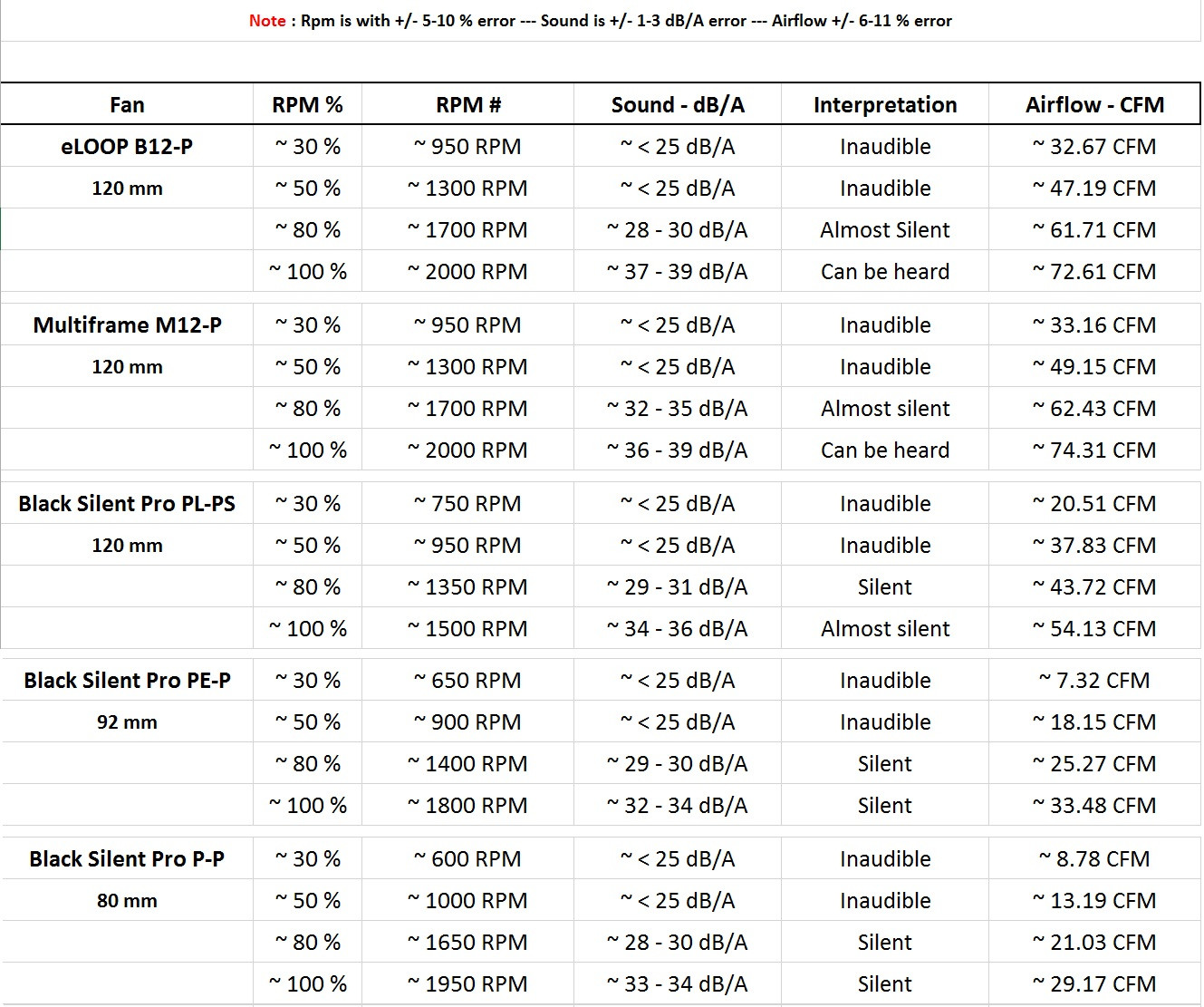 By the numbers, it’s pretty close of OEM specifications so there is truth to their readings and ours.
We didn’t expect this but we really tried to make the fans to be loud. We failed.:)

Only at maximum RPM the eLOOP and Multiframe for example started to be noticeable, but again we keep our case very close to us on the table so in real life usage like in full load gaming for example where they are used as a CPU cooler and/or as case ventilation, we think that there will be no problems at all.

At maximum RPM all of them are still quieter than our old test fan.
The small ones are the best we’ve seen regarding noise output and they have 1800 RPM and 2000 respectively.
The PWM transition is very smooth on all of them.

The 120 mm fans the B12-P and M12-P have a lot of punch regarding airflow, no turbulence appeared when used to cool the CPU via the Themlaright heatsink. The long screws supplied with the fans fitted perfectly in the heatsink, they are extra long so you can safely use all of the rubber grommets.

This being said, we are very impressed about them today.

The good:
+ They perform flawlessly
+ The best quality/performance and noise ratio we’ve seen so far.
+ The attention to details is outstanding
+ The antivibration systems work extremely well
+ The eLOOP and Multiframe series look so advanced and cool
+ Their presentation is very professional and rich with technical details
+ Complete accessories bundle

The bad:
– Maximum RPM for the eLOOP and Multiframe may be subjectively judged
– Maybe the price for some, but with no shadow of doubt we think they are worth it.
Our motto is if the only compromise is price and in return you get maximum everything, then it’s well worth it.

There is no way they don’t get our maximum rating and awards and there is no need to differentiate the awards because they are all winners here today for us.

Globetrotters “High Performance” Award – 5 out of 5 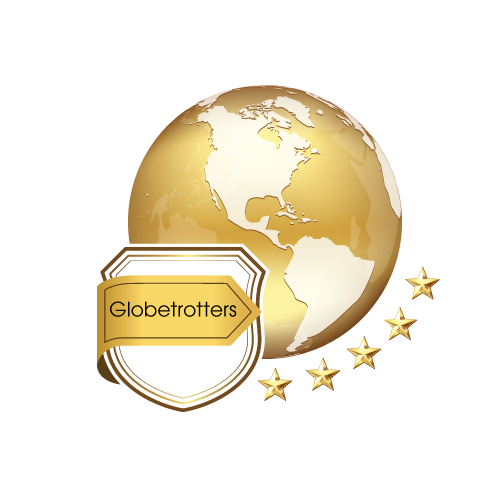 Many thanks to Noiseblocker for the supplied products !