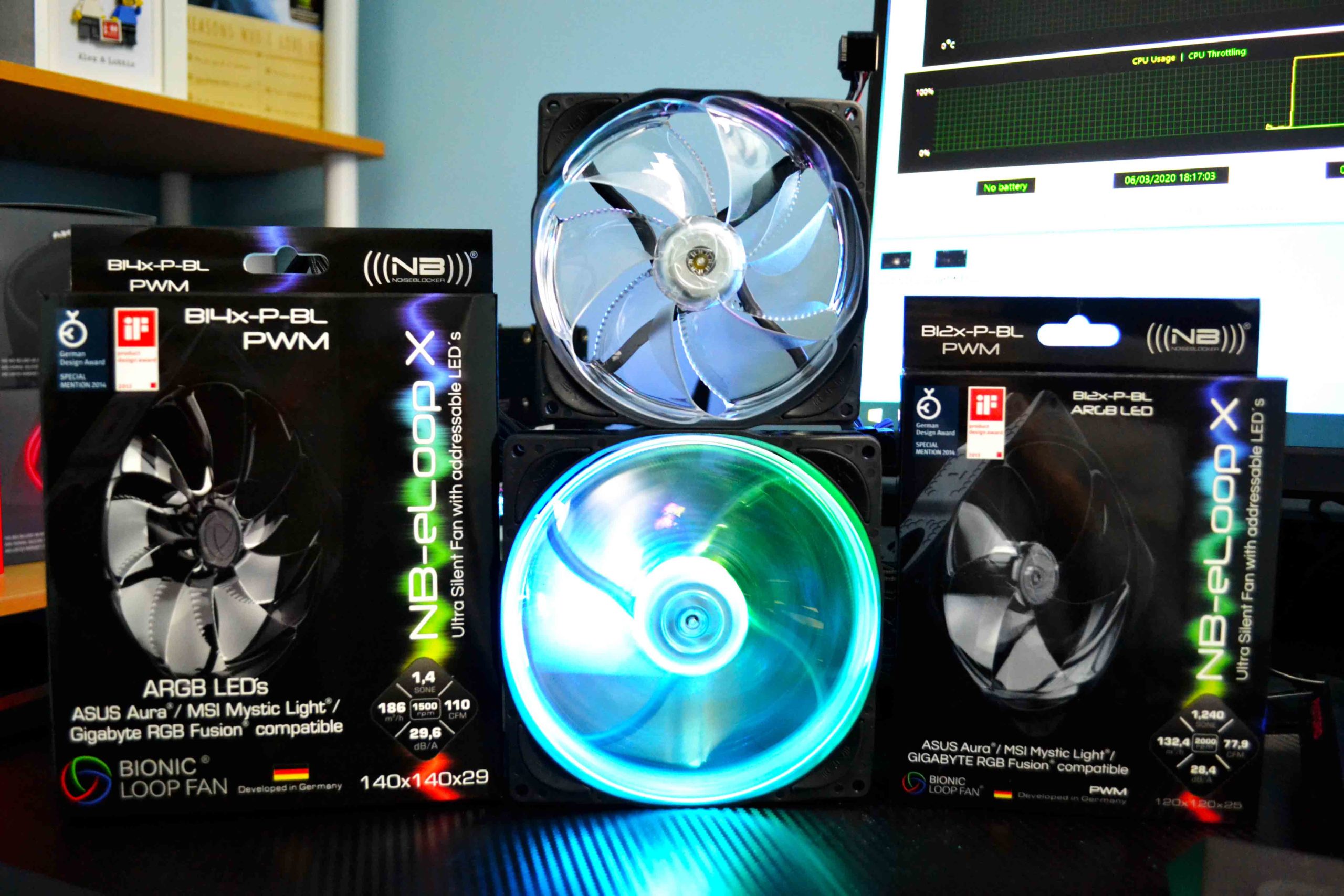 The Noiseblocker Black Noise series of fans, especially the Bionic eLOOPs, are one of the best overall out there, which we also covered in the past. Today, we finally see them in an addressable RGB variant as well. The new X models come in either smart black or white, making them perfect for sprucing up the interior of your gaming PC whilst also improving the overall airflow as well, without having to compromise on noise of course.

The new, more neutral colour scheme means they coordinate perfectly with just about any system, allowing users full freedom to select the combination of cases and fans that they want. Even the integrated RGB lighting is reserved: a total of seven digitally addressable RGB-LEDS are embedded in the hub and these help to illuminate the transparent fan blades as well as the frame.

The new eLOOP ARGB series has a nice option range with either the frame being white or black which you can then choose from 120 or 140 mm in size. Also worth mentioning that the 120 mm variants can be had with 1500 or 2000 RPM. So that’s 6 options in total to choose from. Down below we only have in stock the all black ones with the white variants soon to follow.

The most striking feature of the bionic fans of Noiseblocker is the unique blade shape, which makes the noise of the airflow itself significantly quieter. At the same time, the fans help focus the airflow. This enables a more directional and efficient style of air flow, offering advantages depending on where they are being used and the components they are paired with (directional air transport, airflow management, water cooling etc.

The eLoop fans are the result of research conducted by Dr. Rudolf Bannasch, who developed the basic principles of this style of rotor. The technology gradyated to production readiness in Noiseblocker’s own developmental laboratory. This elaborate process was made possible thanks to funding from the German Federal Ministry of Economics and Technology. The aim of the project was to develop the “quietest fans in the world”.

The technology that has been developed helps reduces the noise produced as a result of the air flow, with the total flow rate increased over a comparable area at the same RPM. The other consequence is this is a commensurate increase in energy savings during operation. In addition to the bionic (i.e. naturally occurring, simulated) fan shape and optimized electronics, the high-tech fans also feature other clever innovations. These include a newly revised NanoSLI bearing (version 2) from Noiseblocker with an encapsulated design for maximum protection against dust.

Furthermore, the NB-eLoop has cable management: Only a very short 4-pin cable is attached to the fan itself, the length of which can be varied using two supplied adapter cables. Thanks to the choice of a polycarbonate material, in particular Makrolon, the chassis is also vibration dampened and additional dampeners are still included as standard.

A total of seven digitally addressable RGB-LEDs are installed in the hub, discreetly illuminating the transparent fan blades. Thanks to the widespread 3-pin connector (5VDG), the fans can easily be connected directly to an appropriately equipped motherboard or controller. The lighting can be controlled via ASUS Aura Sync, MSI Mystic Light or Gigabyte RGB Fusion.

The fans come in an all black themed design for the packaging. The front has a lot of branding, mentions of patents, main specs and a visual depiction of the actual fans. 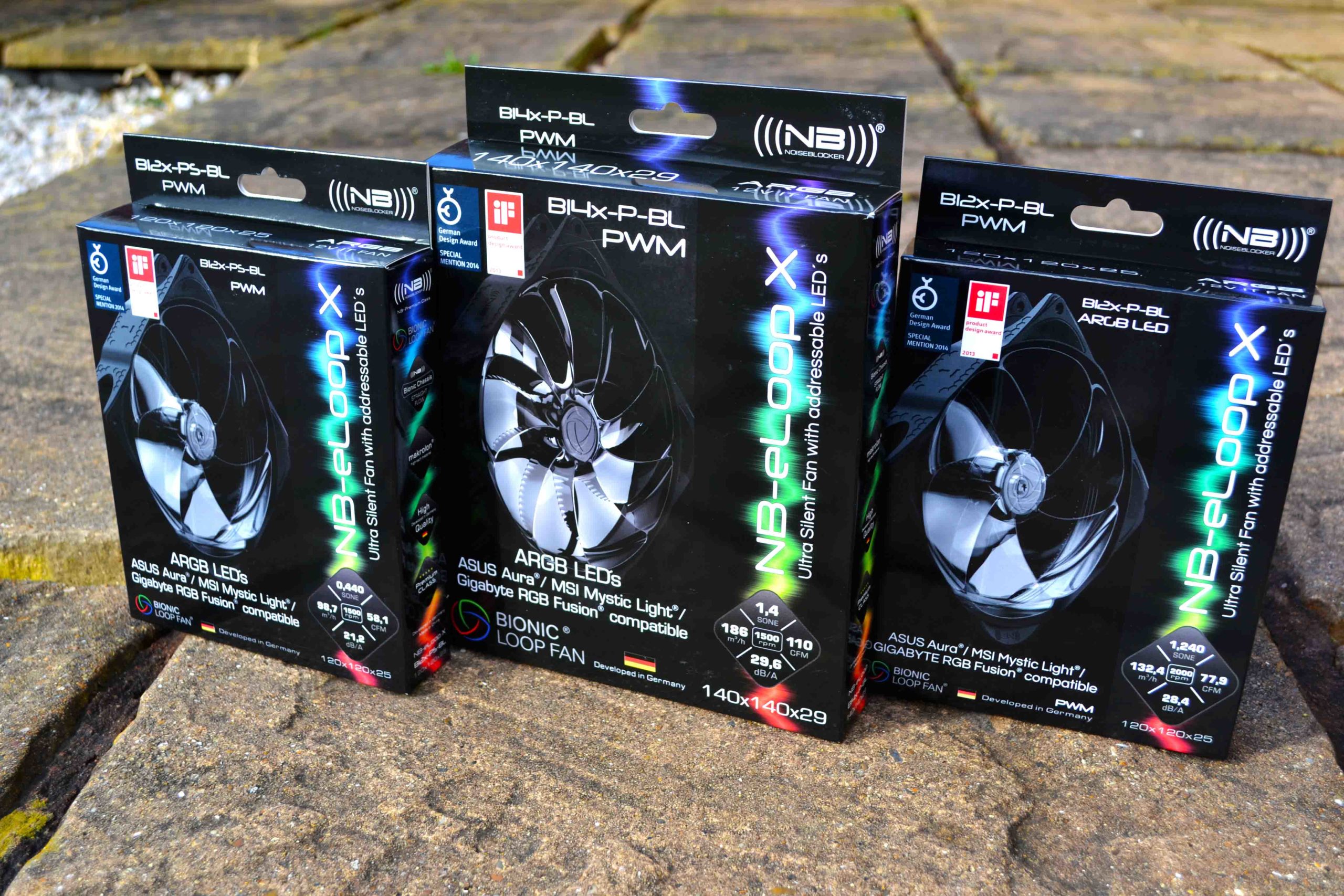 On the back we have one of the most in detail spec lists I have ever seen in fans. 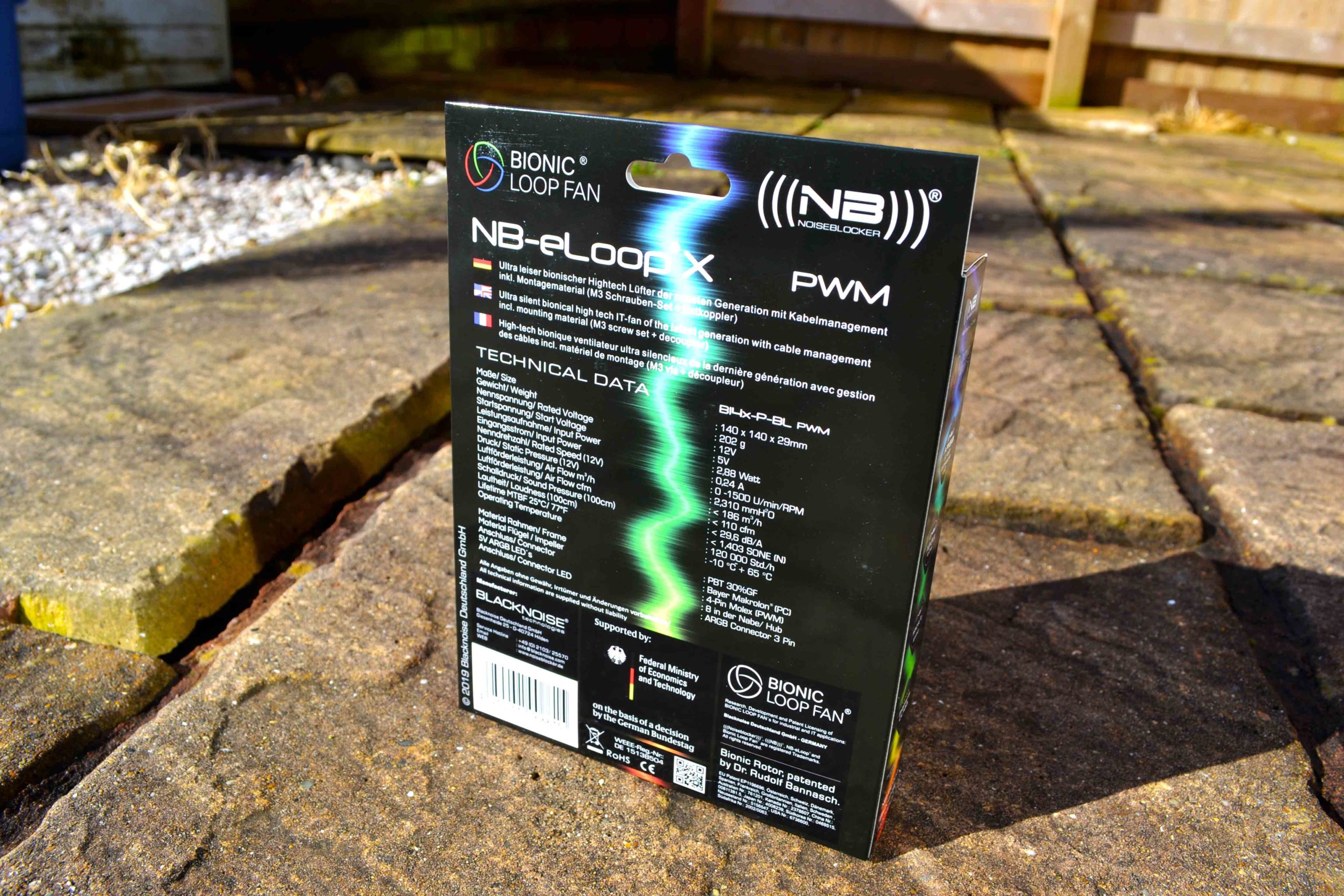 These ARGB ELOOPs come with two sets of fully braided modular cables in different lengths. One set is for the PWM and one is for the RGB control. Also the securing system is overkill with rubber washers for both ends of the screws and thin custom thumbscrews for maximum reduction in vibrations and thus noise. 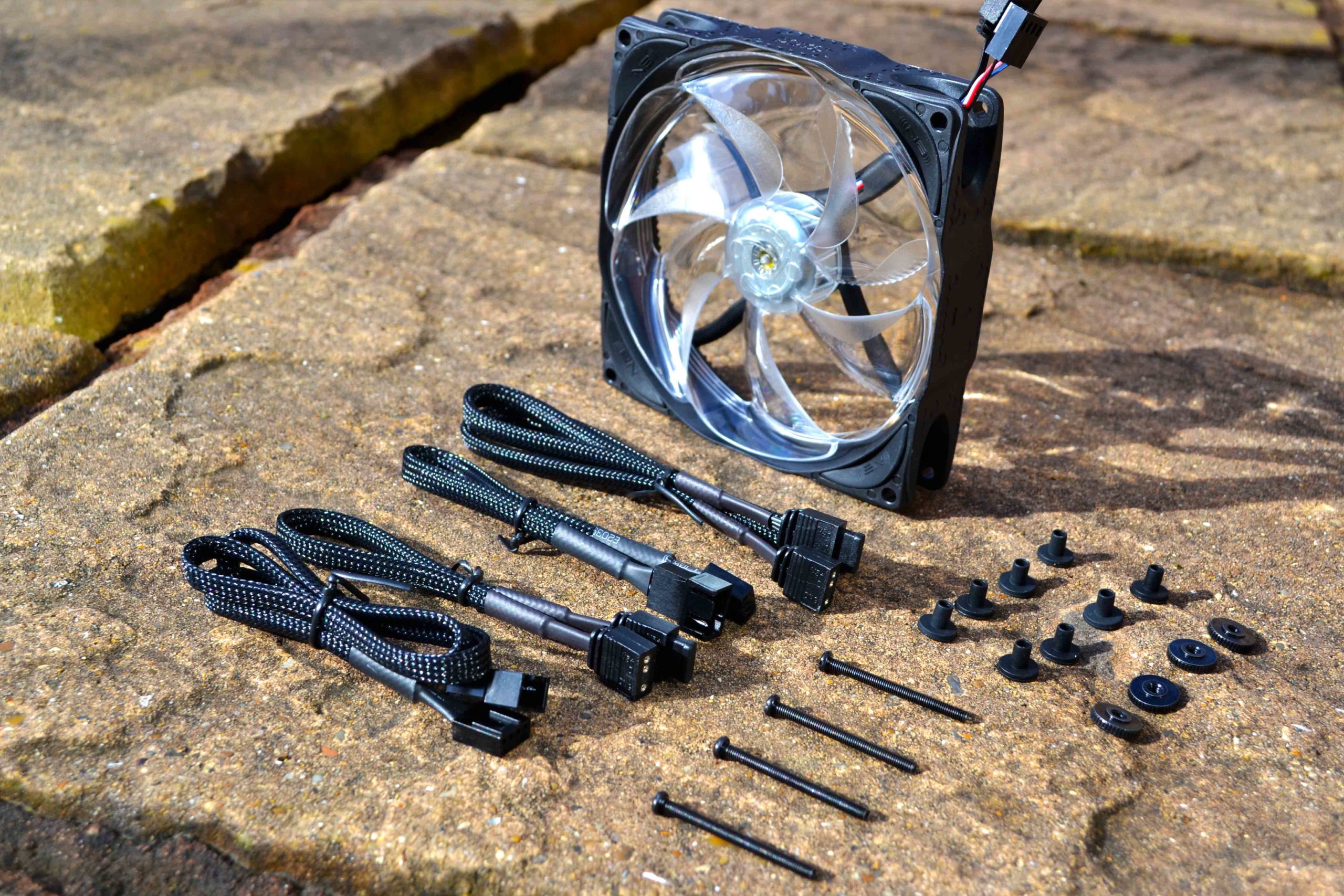 The way they have incorporated the LEDs in the rotors, means that they had to make the propellers transparent. We count 6 blades on the 120 mm variants and 9 on the 140 mm ones. The same continuous blade design is incorporated since, if it works, why change it? The frame is made from PBT 30% (Polybutylene Terephthalate – which is reinforced fiberglass) while the impellers are made from polycarbonate plastic resins called Makrolon (think of Lexan since it’s a variant of that). This combination ensures a tough but light casing for the fans to last as long as possible.

The same rubber pads for each corner to reduce vibration are still present. Now the blades have a portion on each of them with cutout patterns to improve turbulence and airflow. 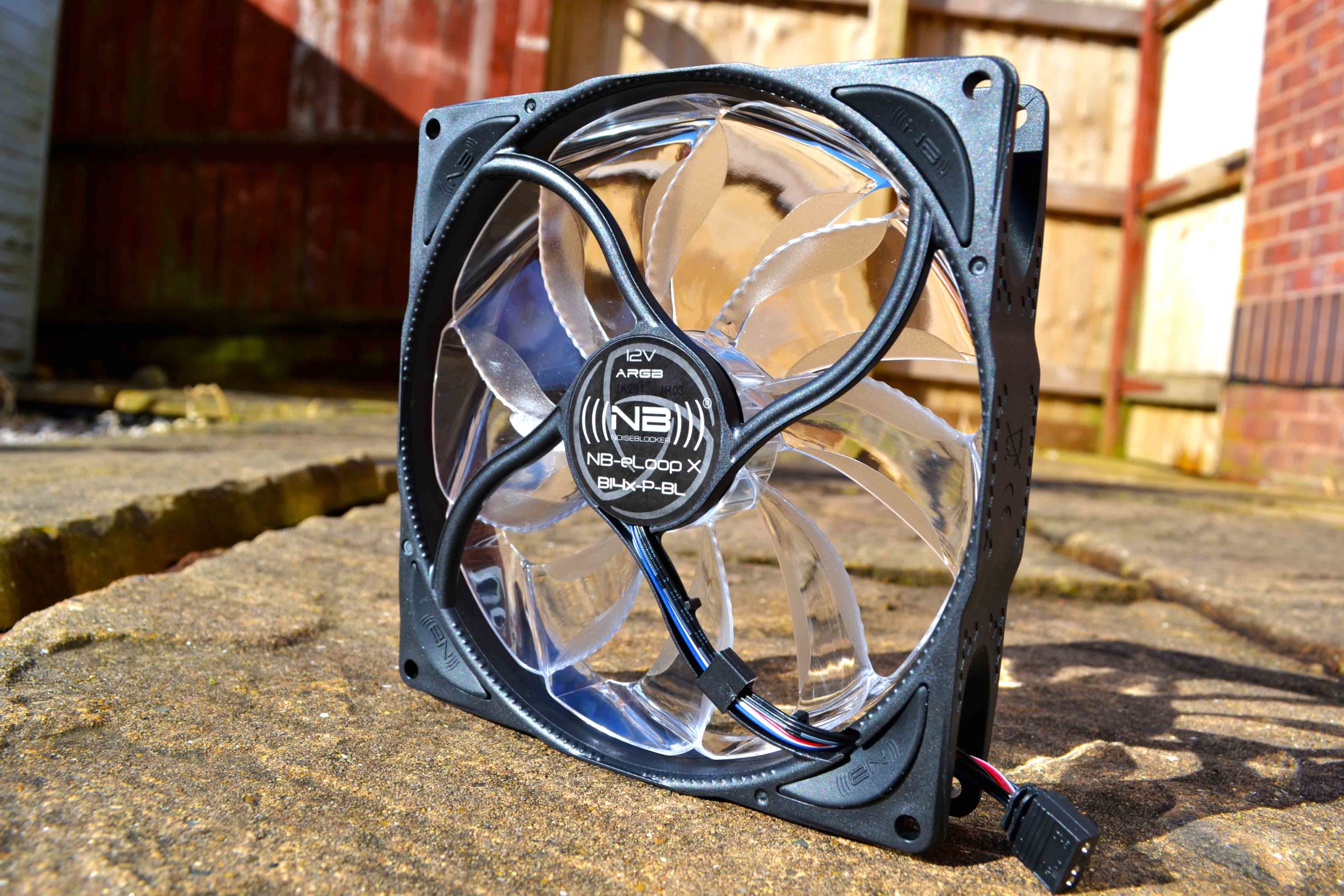 Zooming in on the 120 mm ones, we noticed on the outer rim of the continuous blade portion, some milling and extra grooves, maybe for weight reduction and/or improved turbulence. 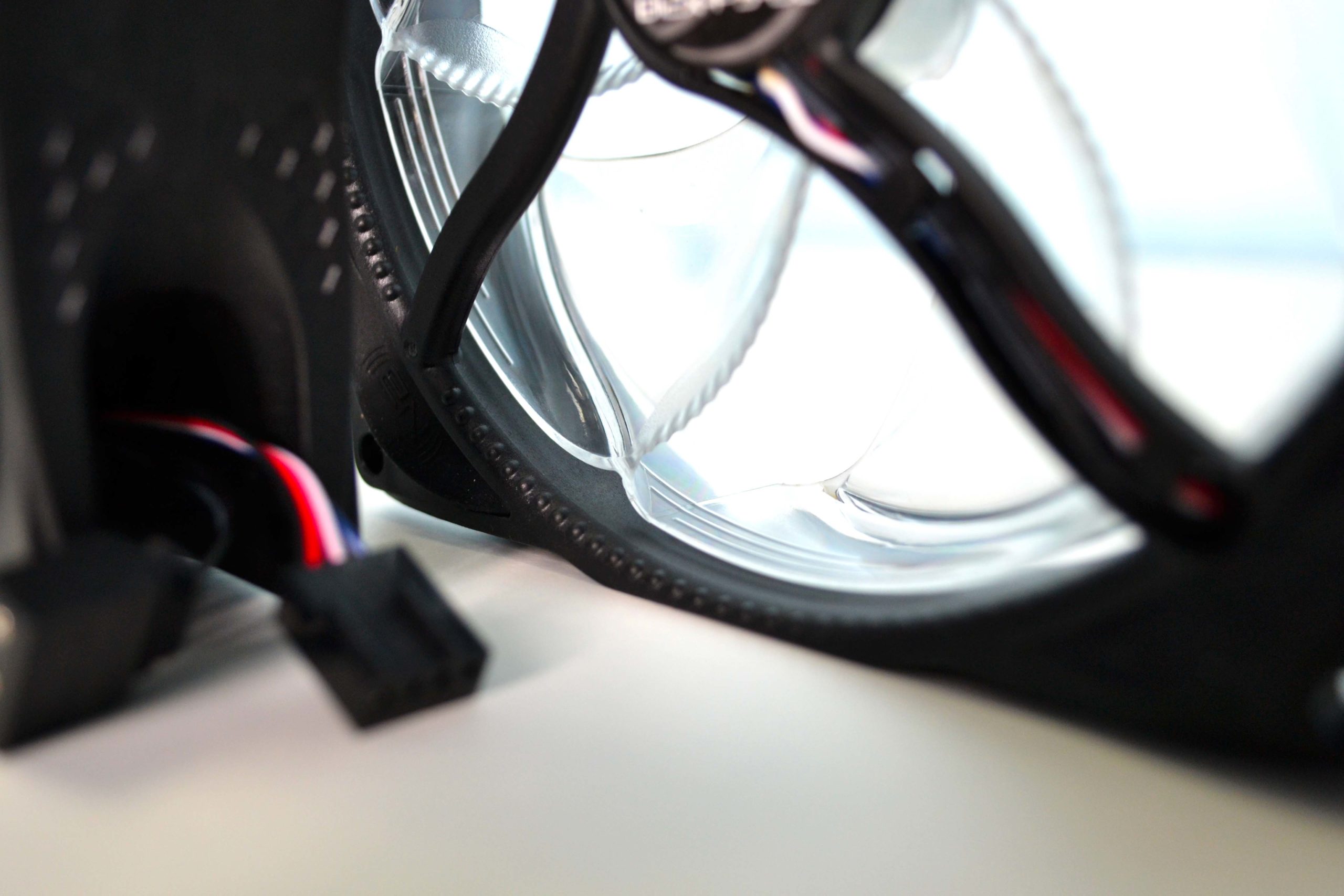 Now for the star of the show, the ARGB implementation. There are 7 LEDs in each 120 mm fan and 8 in each 140 mm ones. They are fully compatible with all main motherboard vendors regarding software control. Suffice to say, the Noiseblocker ARGB looks absolutely stunning ! 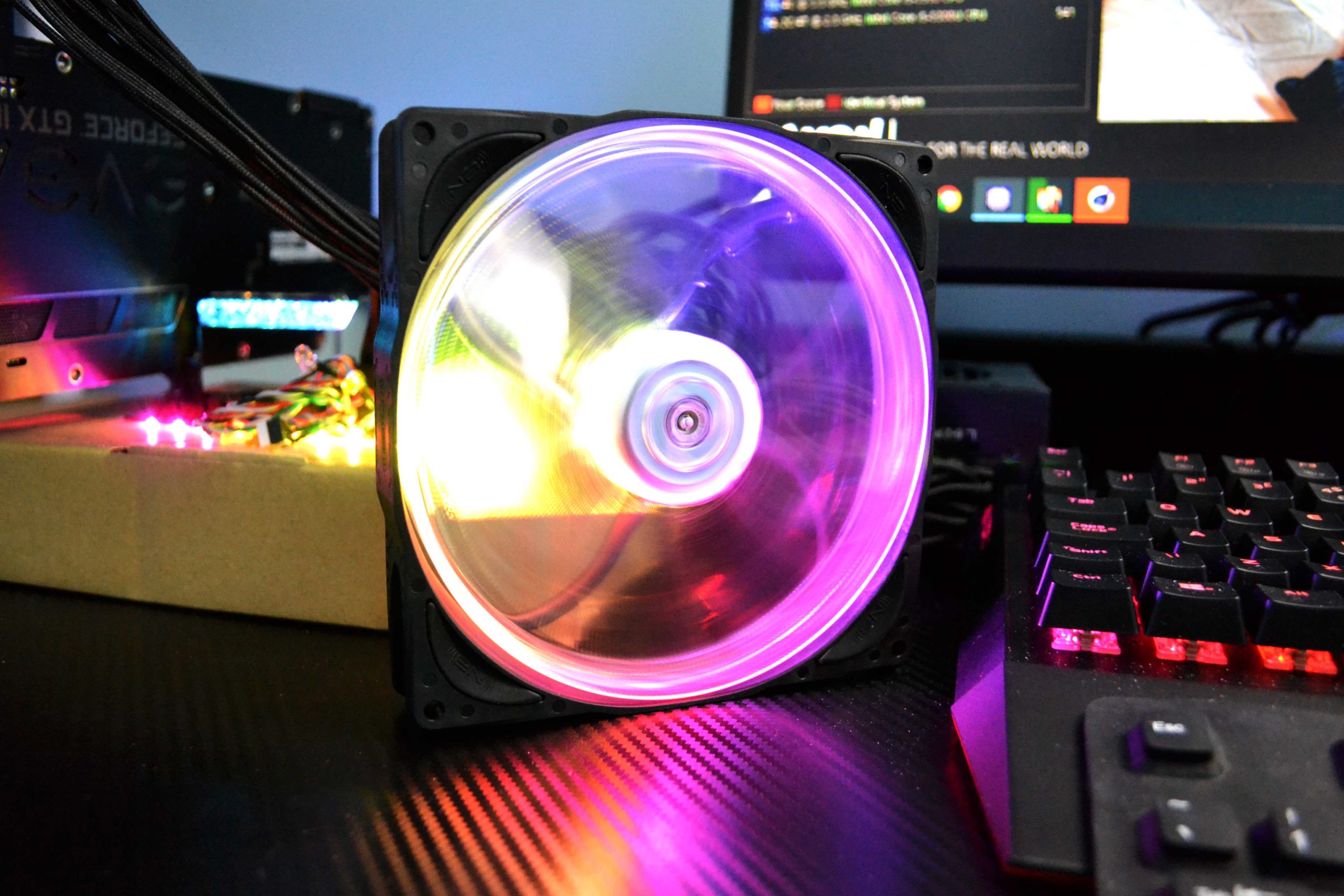 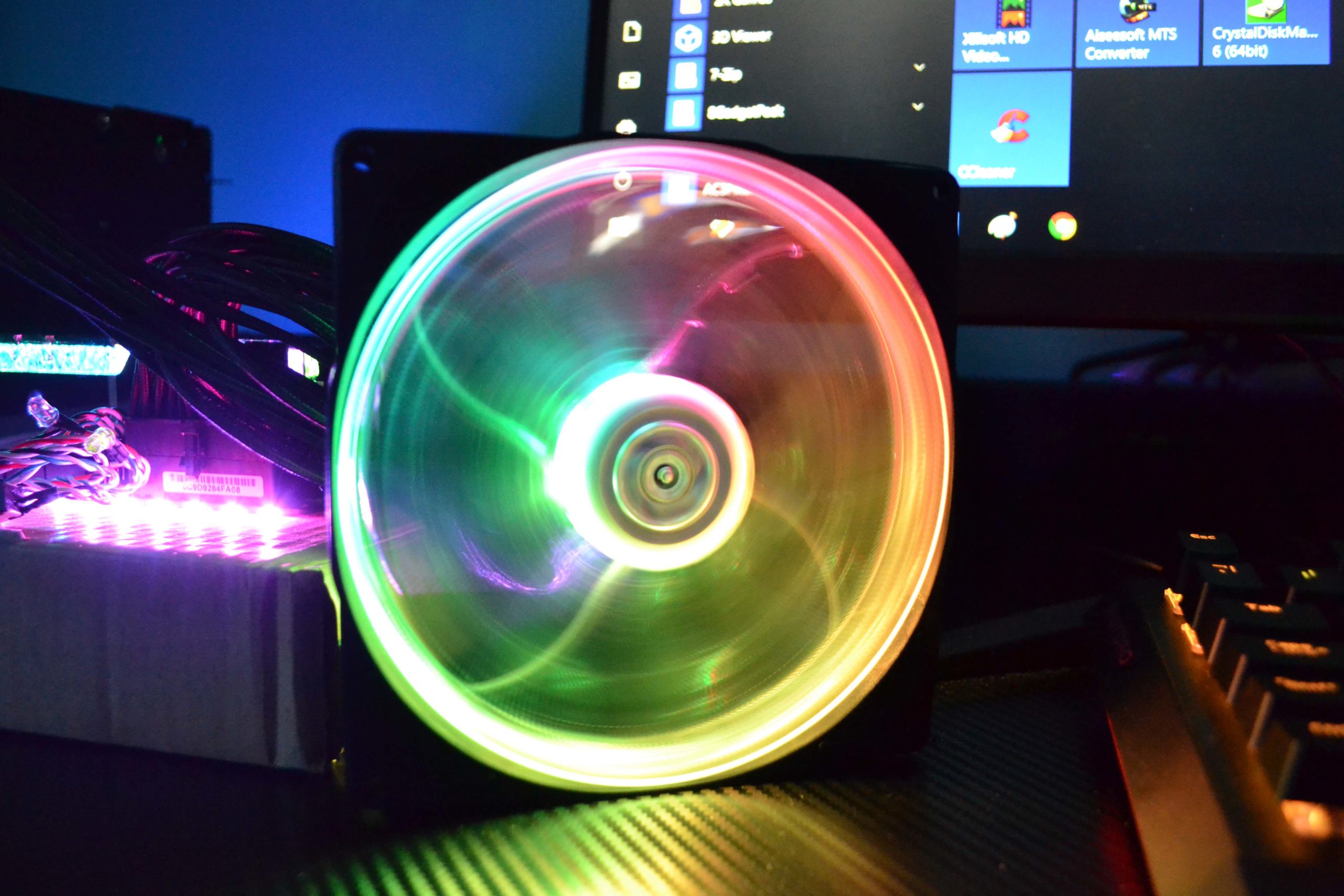 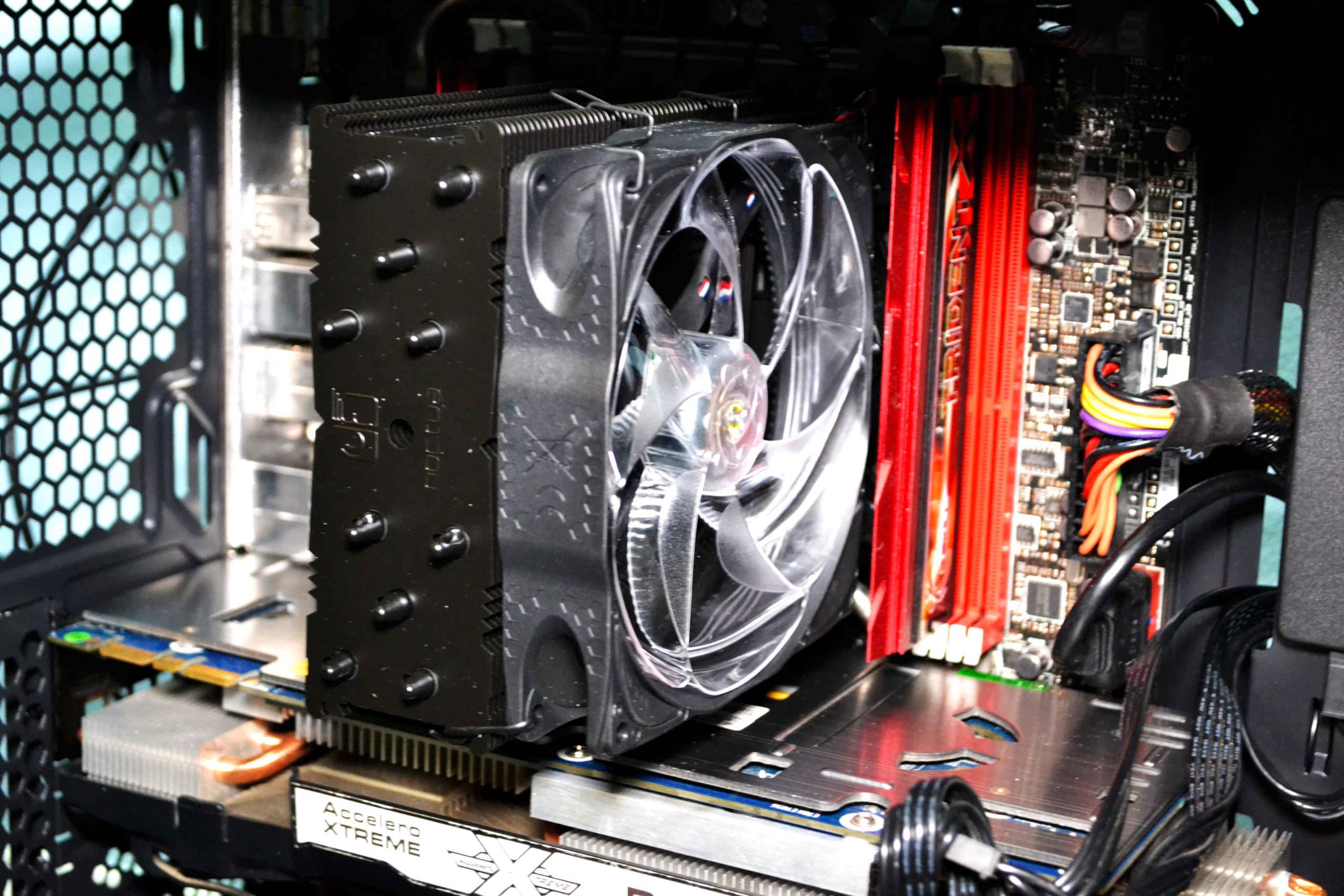 Let’s start in order of CPU load difficulty. First up is Cinebench R15. On the first picture sequence we have the CPU in stock form while in the second one we have the results for the overclocked scenario, for the Noiseblocker fans.

Things are very interesting. The best numbers come from the 3000 RPM Noctua model of course, since it has the highest RPM and then from the 140 mm B14x-P Noiseblocker fan which, despite the fact that at 140 mm, it’s bigger than our testing heatsink, it still manages to pull ahead of the other 120 mm ones.

The Cinebench R20 is a more modern up to date multi core benchmark suite. So naturally we will see a bigger load and thus a larger temperature figure than R15.

The hierarchy re-establishes itself as the load increases on the CPU but still the top fans are unchanged.

The results are mirrored here as well from the previous test. The Noiseblocker fans are only 1 to 3 degrees apart from one another.

Since we are using a legacy build per say, the game tested puts only a low to medium load on the CPU, thus the temperatures will be very good. 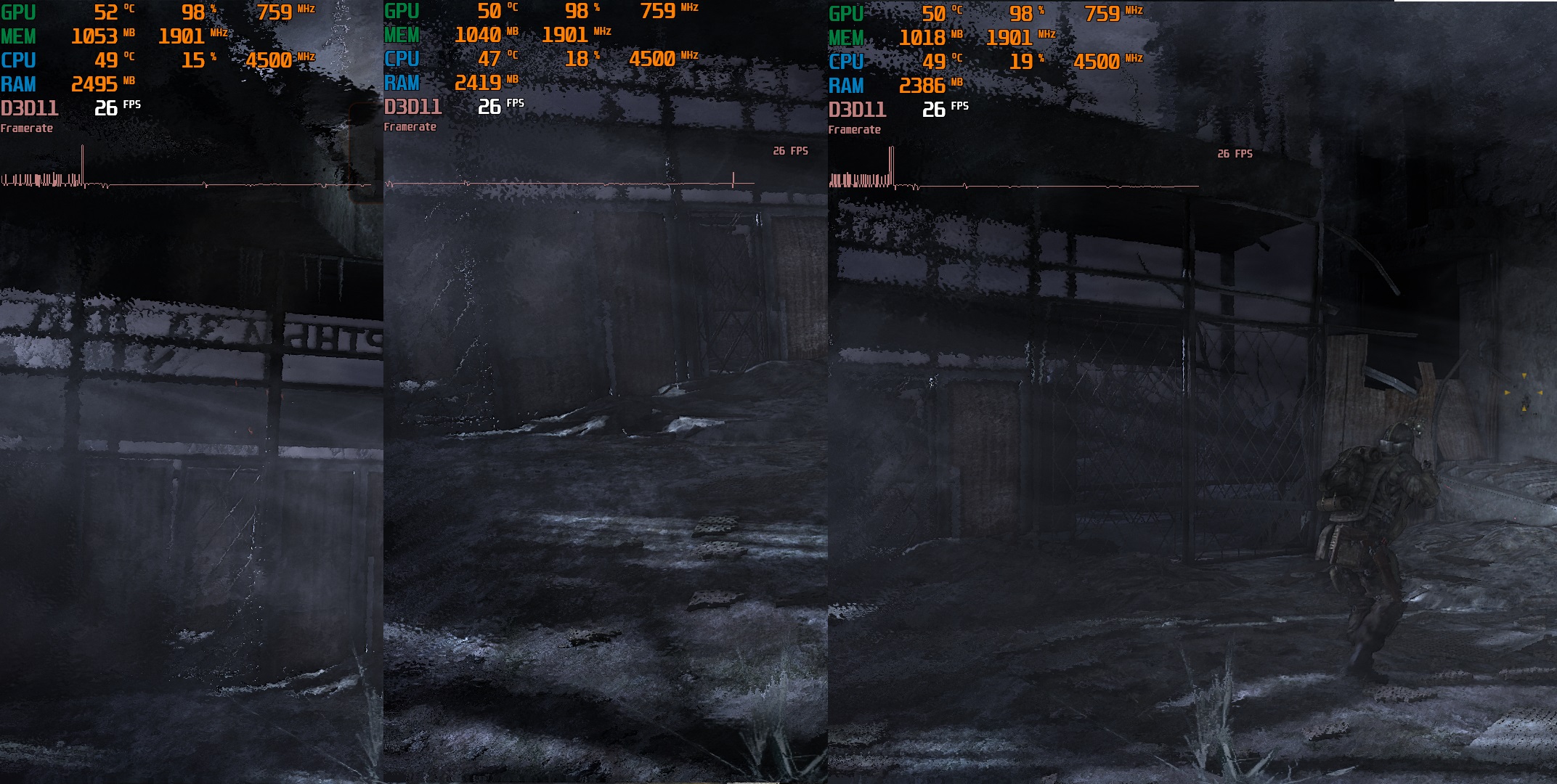 Now let’s inspect the final graph regarding noise levels. They are dead silent. I mean, Noctua and Noiseblocker are leaders in this department so as you would expect both are excelling here. The only exception is the Industrial Noctua since it is optimized for pure performance instead of balancing noise into the equation.

Plain and simple, the new ARGB Noiseblocker fans are amazing in all of the areas that it counts: static pressure, airflow and low noise output. Add on top of that – epic build quality, fantastic warranty, modularity and an unique and instantly recognizable design, well you understand exactly what a premium top tier product you are getting.

Glob3trotters “Editor’s Choice” Award – 5 out of 5

Many thanks to (((Noiseblocker))) for these epic fans !