Noctua L9i
Back in Chromax Black! 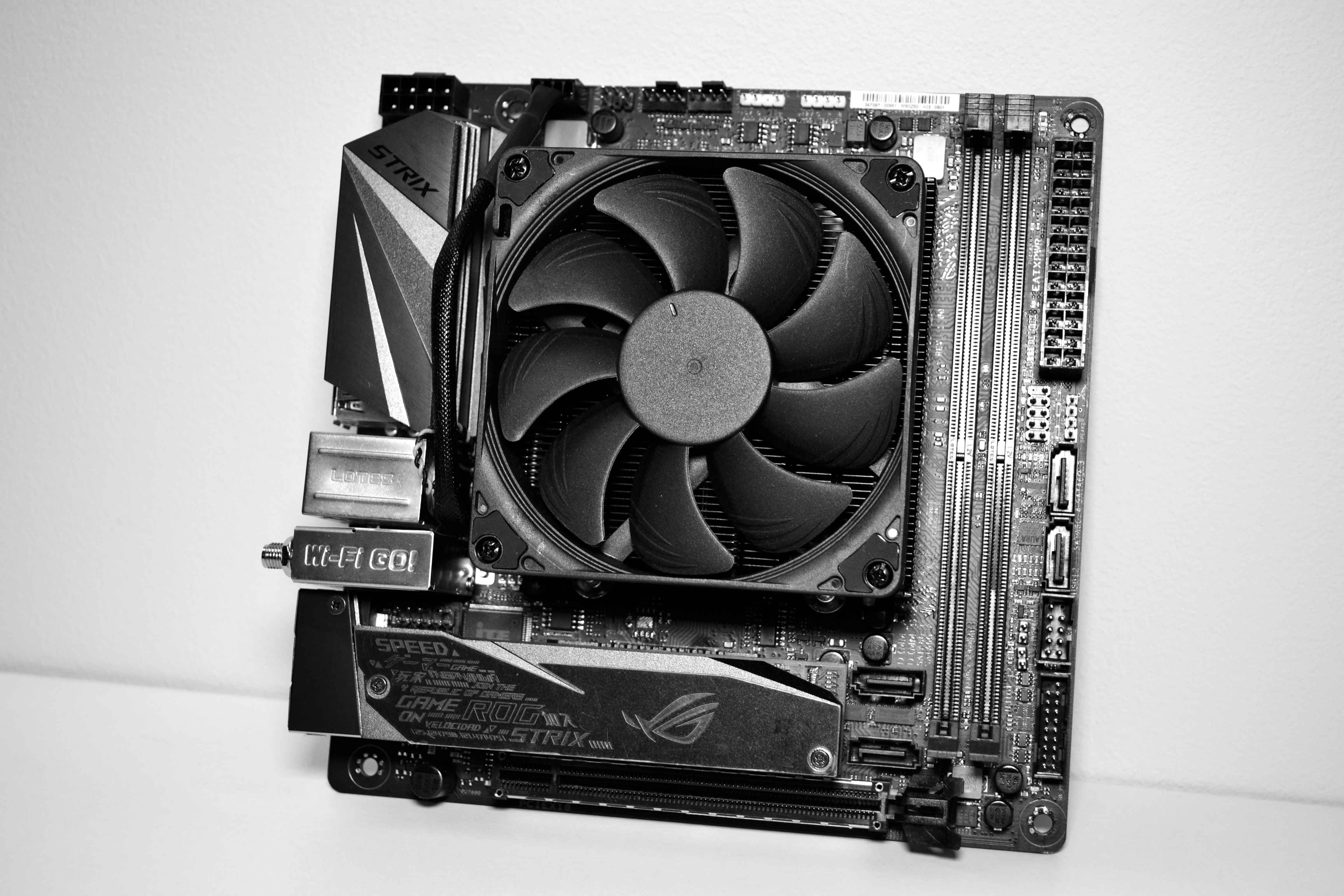 Enthusiasts around the world have asked for this since the dawn of time and our requests have finally been listen and delivered ! Behold the new all black coated Noctua line of heatsinks. So far we have three models that get this all black coated treatment: the NH-U12S, the big boy NH-D15 and of course, the low profile NH-L9i. There is also a new line of fans called chromax.black.swap and cover the NF-A20, NF-A12x15, NF-A9, NF-A9x14 and NF-A8 fans along side the corresponding NA-SAVP5 and NA-SAVP6 anti-vibration pads. Now we can finally satisfy our OCD when it comes to building our rigs !

Today we will be focusing on the L9i since this is the gold standard when it comes to low profile coolers at 37 mm tall, from any perspective.

Basically now the L9 family consists of 3 members. The original L9i in the famous Noctua color combo and then they released the L9a, for the AMD AM4 CPUs, which uses a bigger (longer) heatsink, but with the same fan.

Now, we have the L9i chromax.black which is identical to the L9i, but as the names suggests, it is an all black coated variant. No word if they will releases an all black version for the L9a as well, but you can easily use the L9a’s brackets and mount them to any L9i, so you can use the L9i black on your AMD platform. You can order that kit separate as well. The L9i chromax.black charges an extra $10 for its new skin. 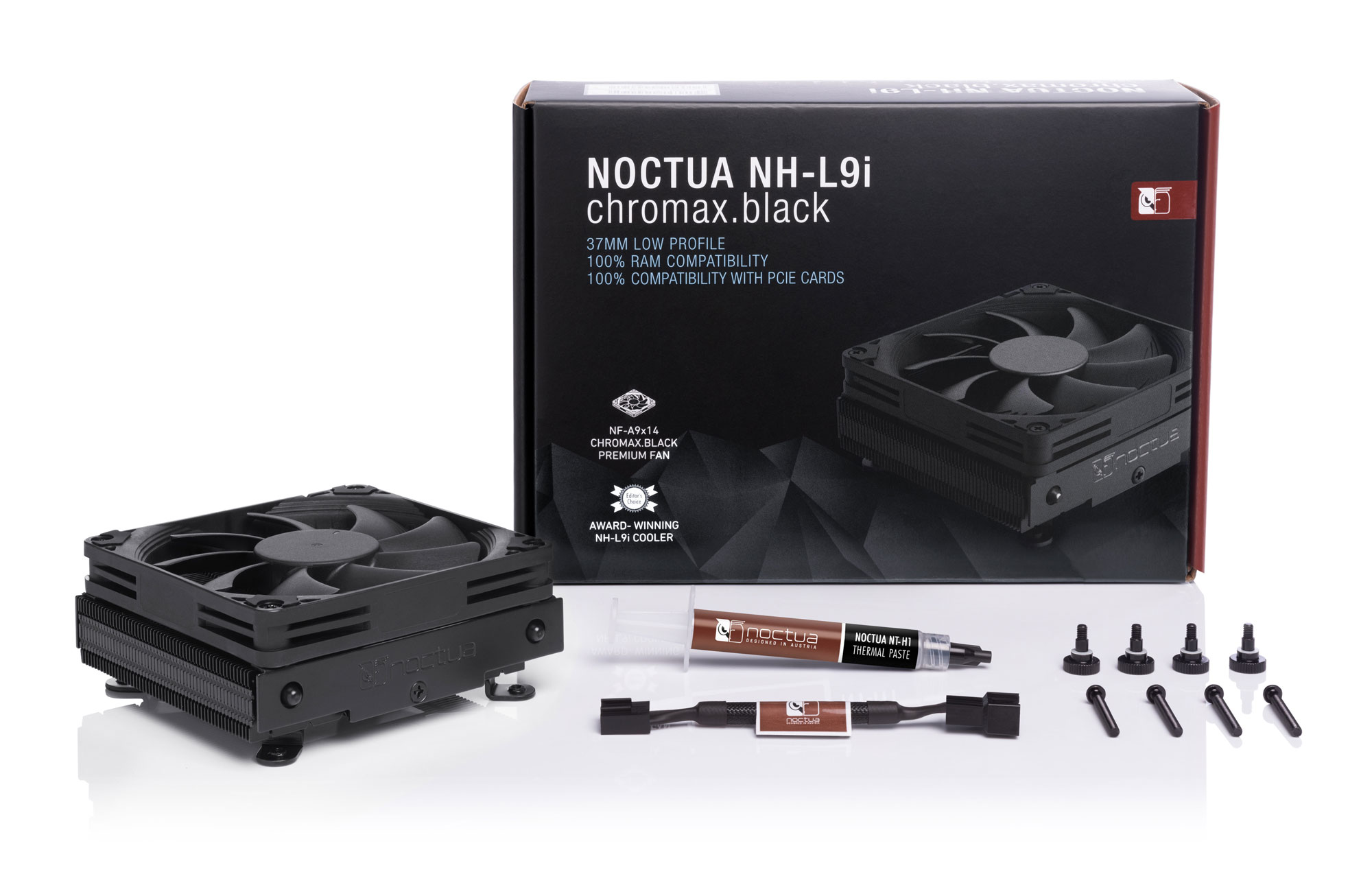 The specs on Noctua products are amazing, not only from what they can do perspective, but from the sheer amount of details point of view as well. The L9i black has the same 6 years warranty, same very small footprint at just 37 mm tall and all of the goodies from the standard L9i. This is a high quality ultra low compact heatsink but don’t get ahead of yourself with its glory and start to use it officially on CPUs with a higher TDP than 65W.

Let’s finish with the all of the numbers and specs.

It fits all Intel 115x sockets and for the AMD AM4 you need to order the extra mounting kit. This time around the included fan (Noctua NF-A9x14 HS-PWM chromax.black.swap) can be ordered separate as well, because in the past to have access to the slim 92 mm 2500 RPM fans, you had to buy the L9i/a coolers all together because the extra fan ordered separately was rated for a lower Amperage and lower RPM.

It uses the same box from the classic color pallete but the overall palette is changed here as well to make sure you know you are getting the chromax.black variant. 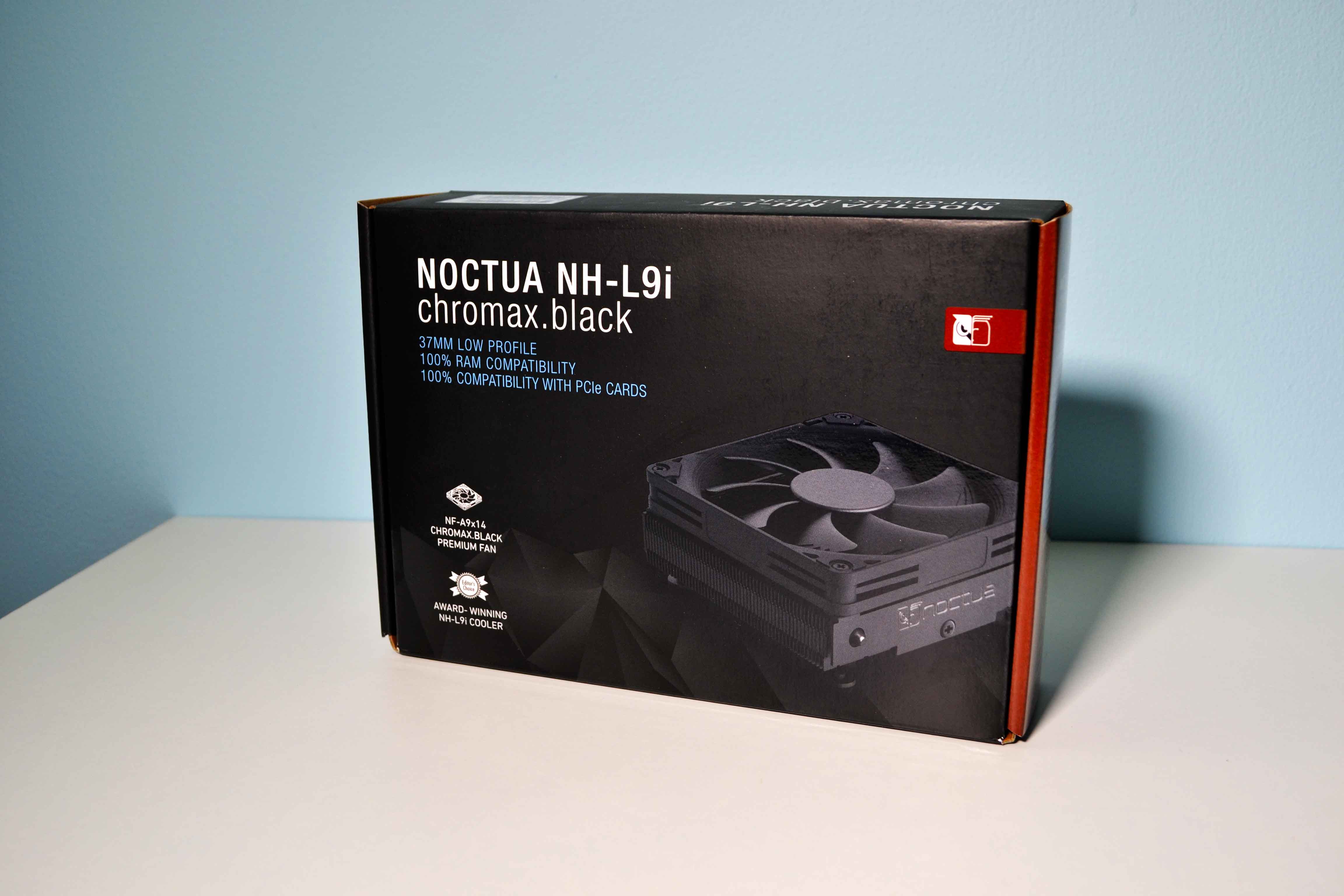 The back states some of the main highlights like zero-headache compatibility with any board, RAM kit and GPU slot, especially on mITX motherboards. 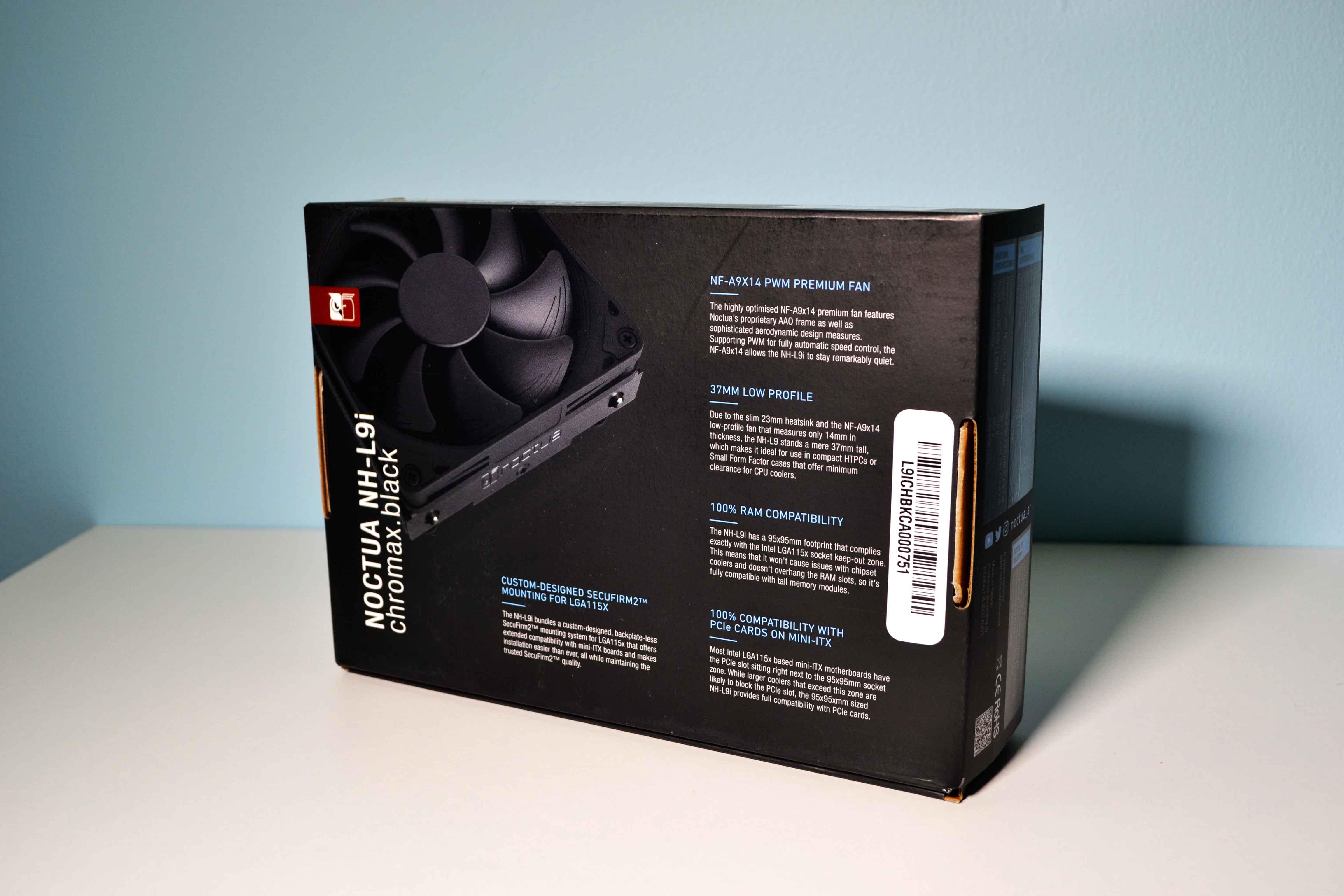 This side gives us all the complete specs for the heatsink, fan and all of the included accessories. 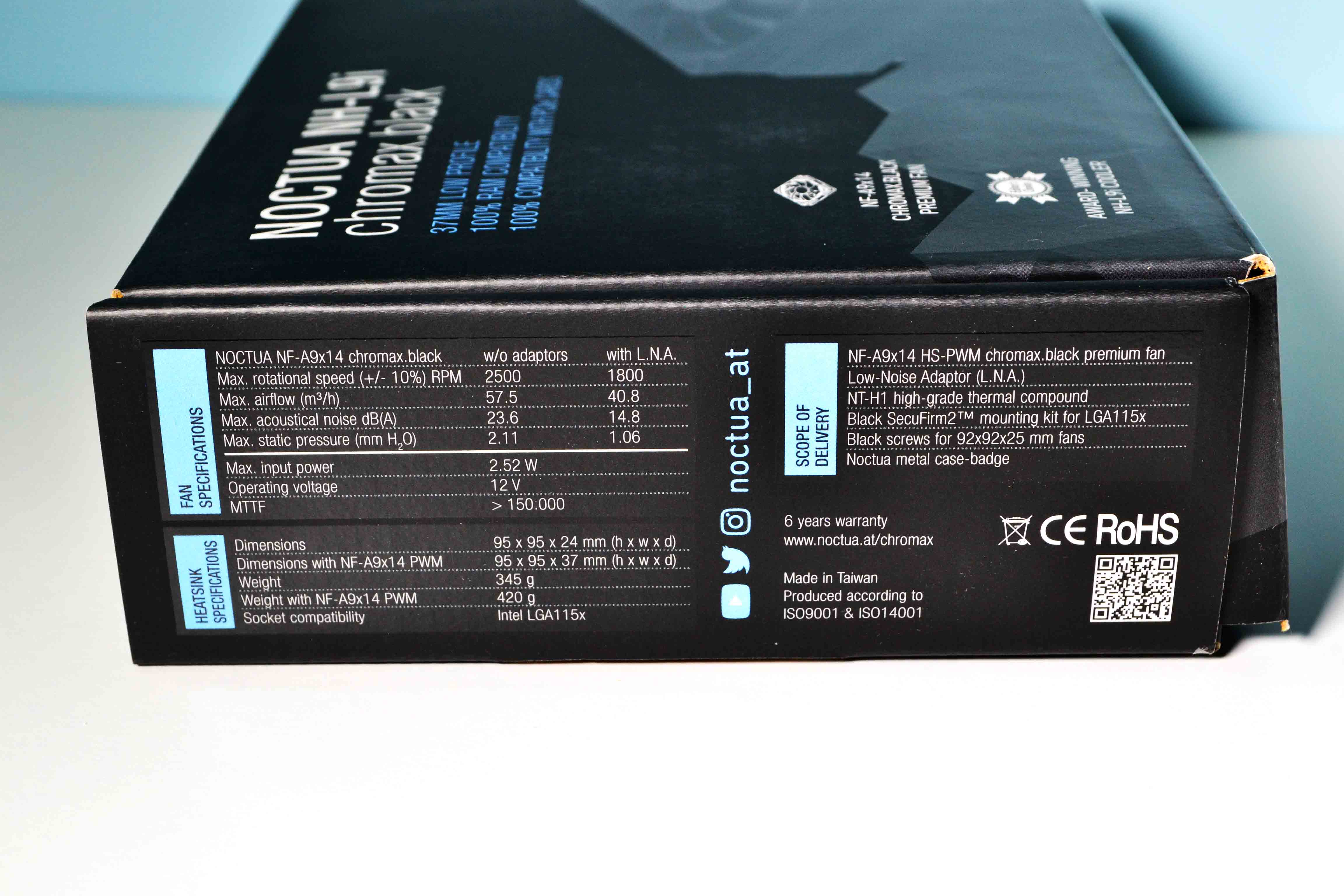 The presentation in the L9 series scores big points. Seeing this gem in an all black scheme is just so satisfying. 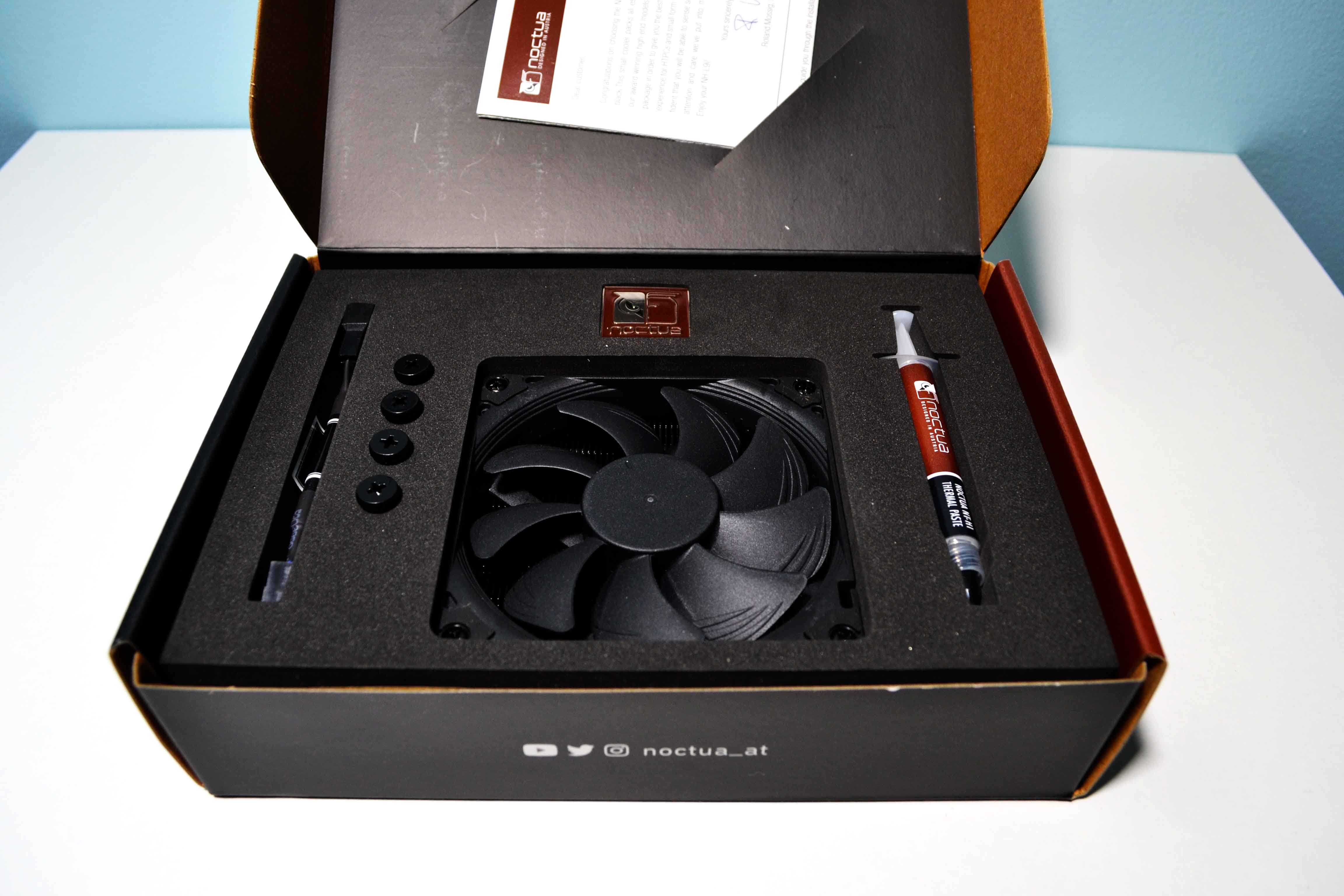 You get the same items as seen in the regular L9i such as: 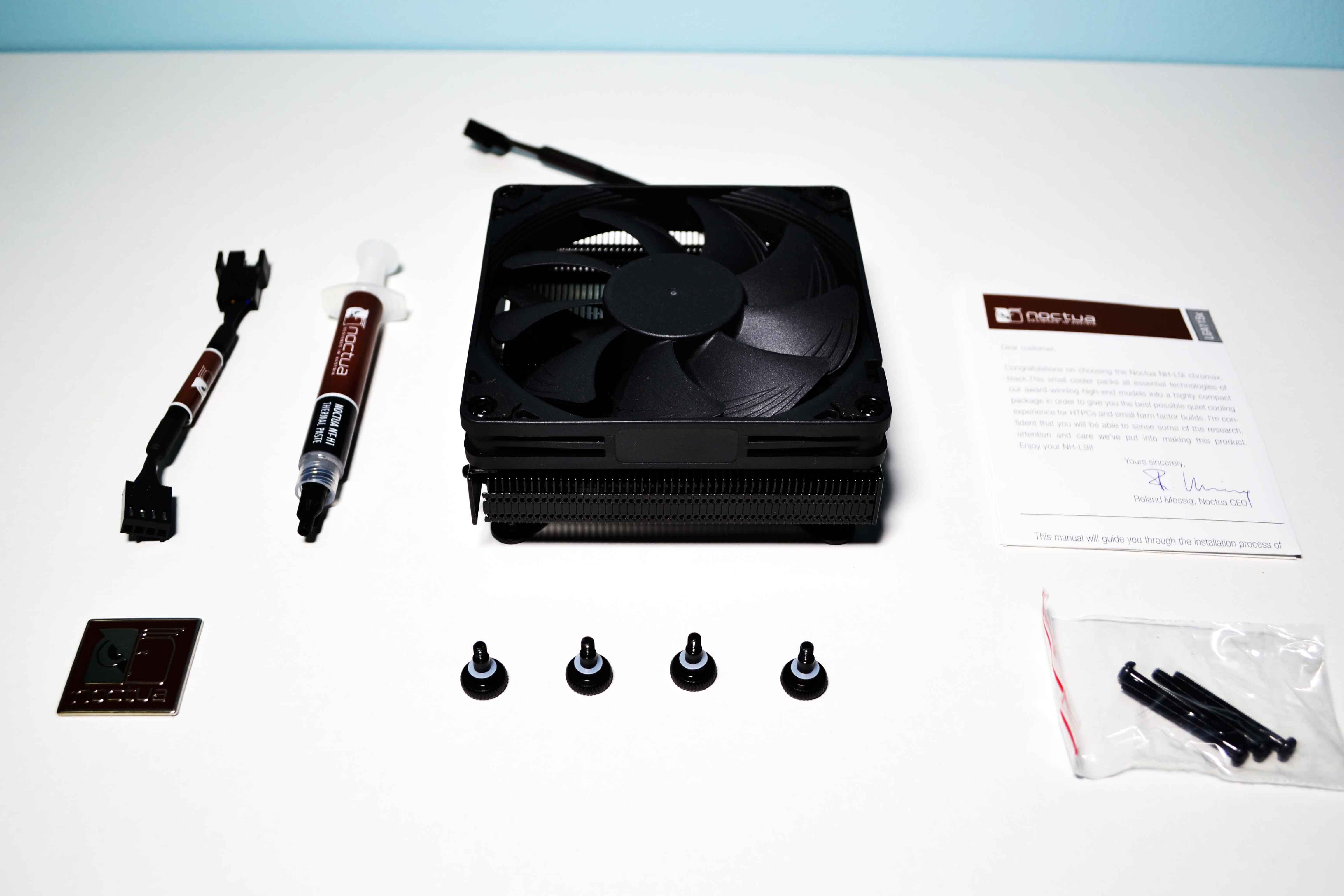 Like I mentioned in the original review of the L9i, this thing is like a piece of jewelry. Now in an all black coating, it looks even cooler and has that black-ops-professional feeling to it. 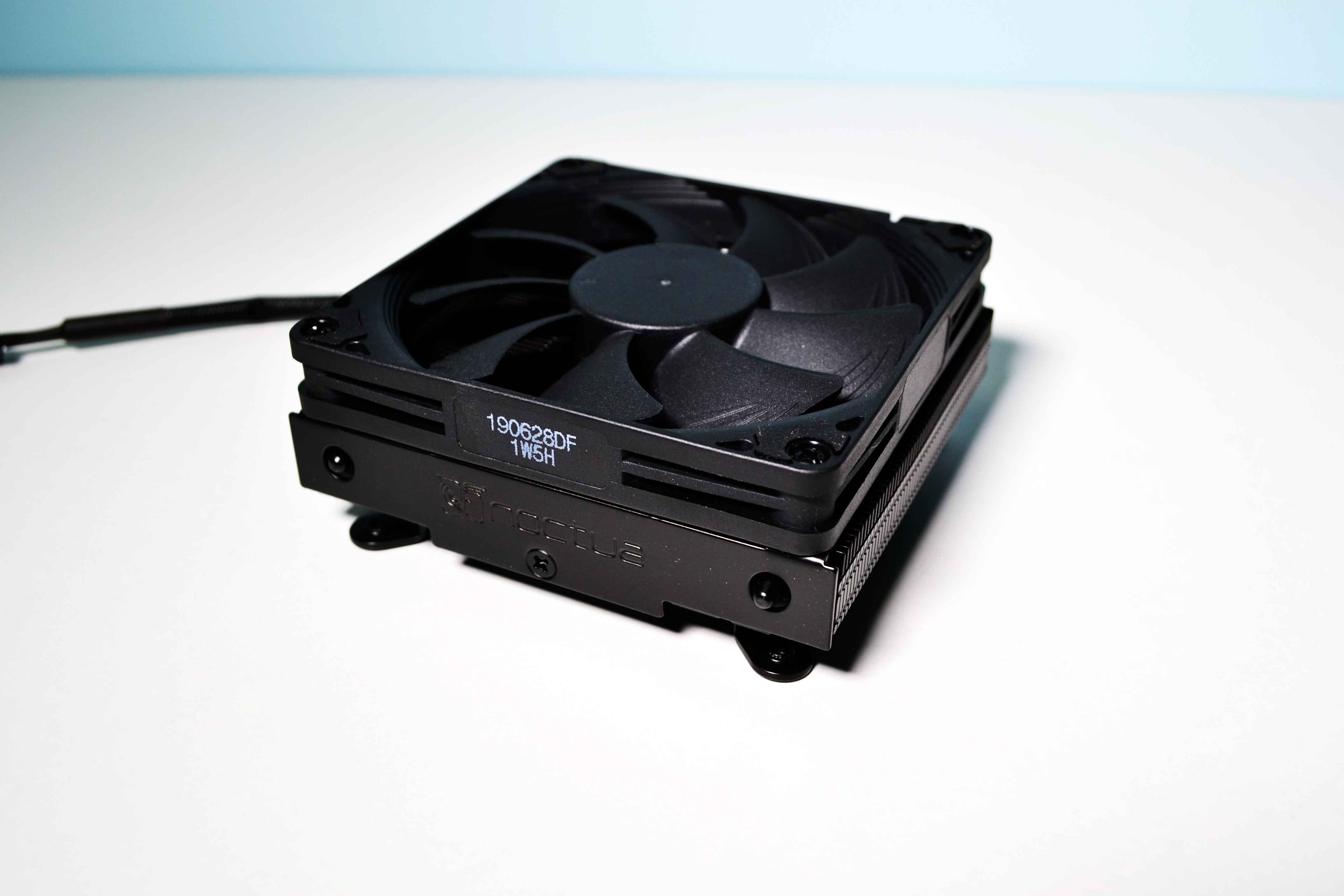 Everything matches in colors, even the individual wires in the PWM plug. This is OCD heaven. 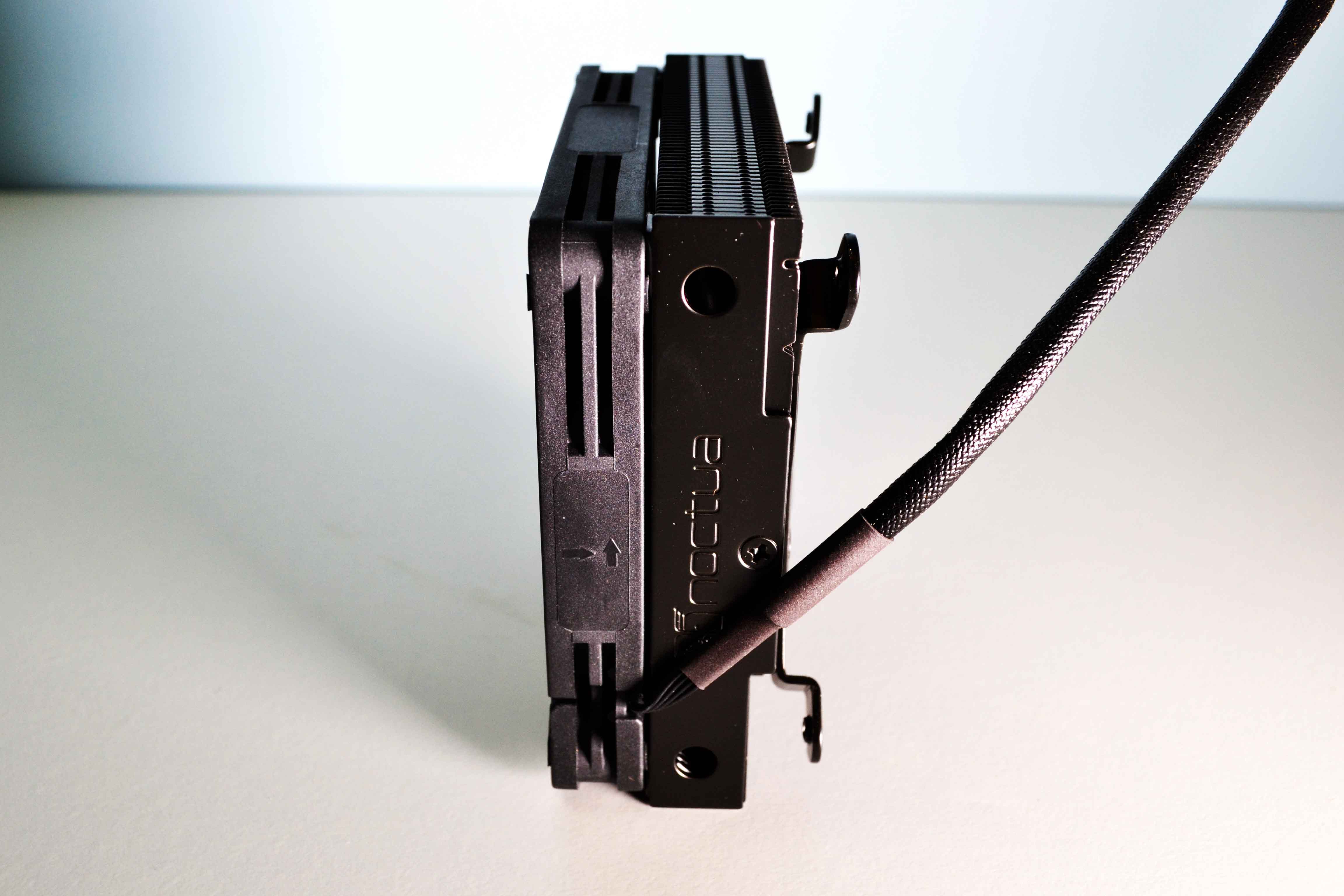 As before, the aluminium fin density is amazing, each being 0.44 mm thick and spaced at 1.16 mm. Then we have two heat-pipes and everything is hold together by soldered joints. 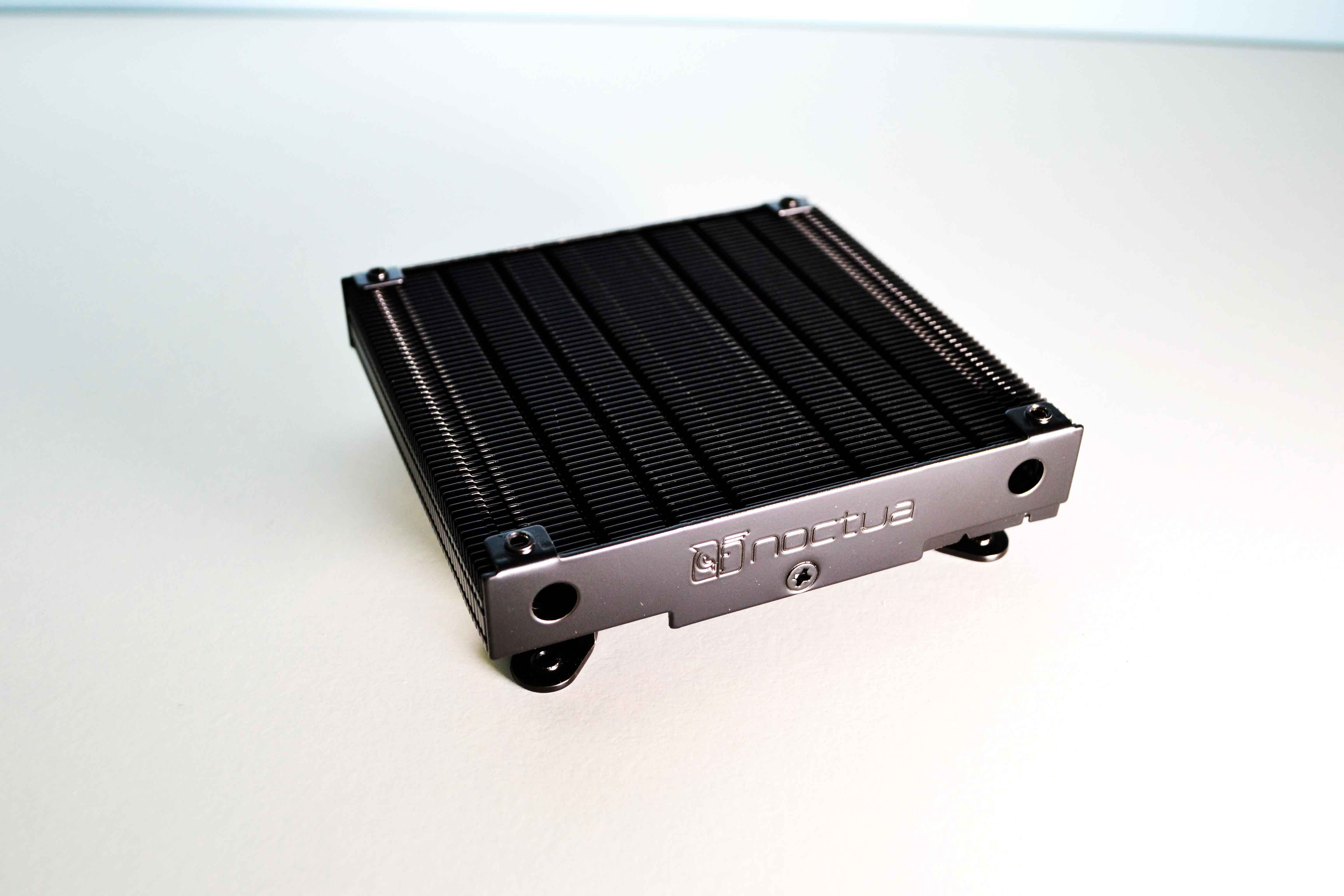 The contact copper plate doesn’t have a mirror perfect finish but it is fully nickel-plated. Even the screws that hold the brackets that you will never see after you install the cooler, are also blacked out. 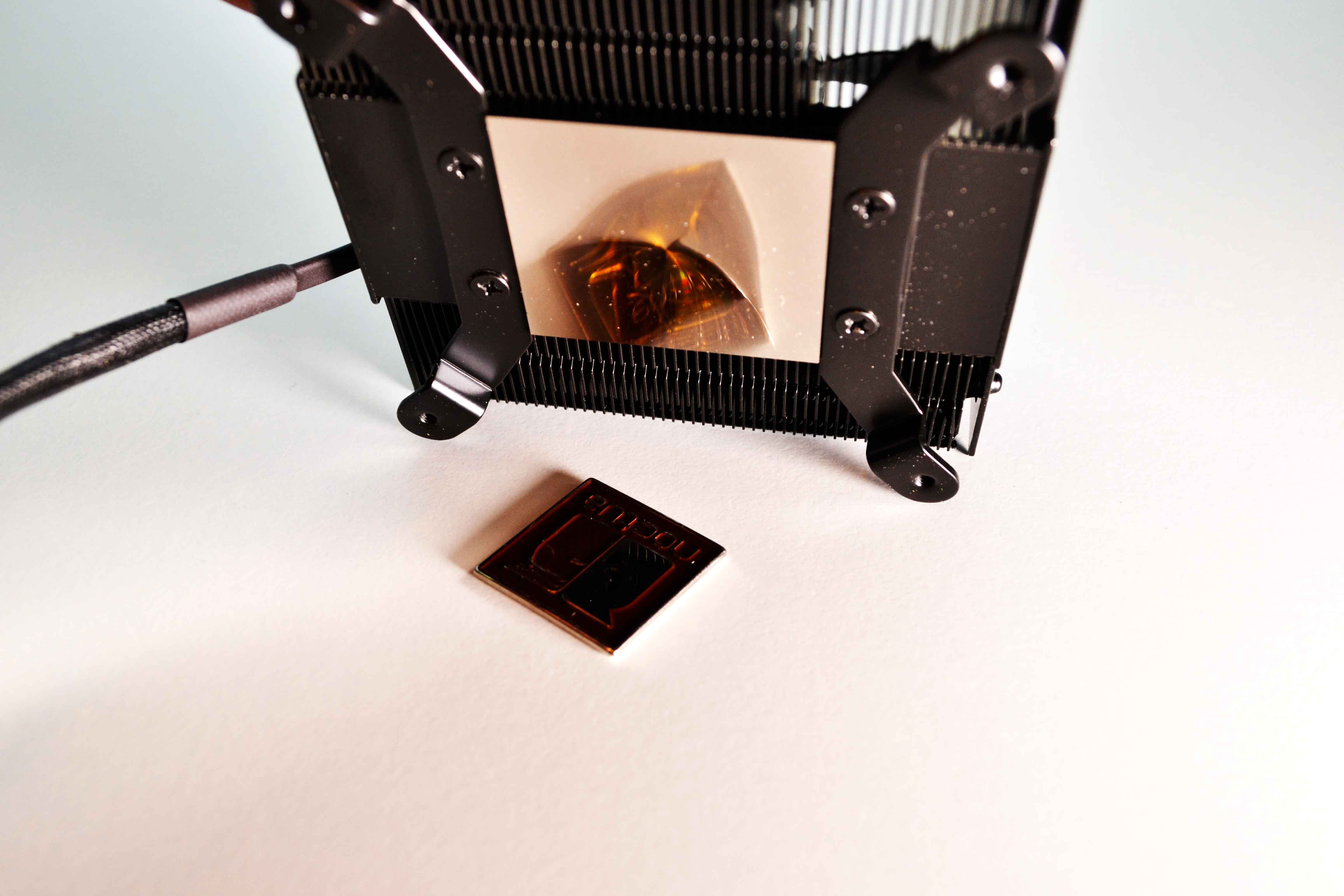 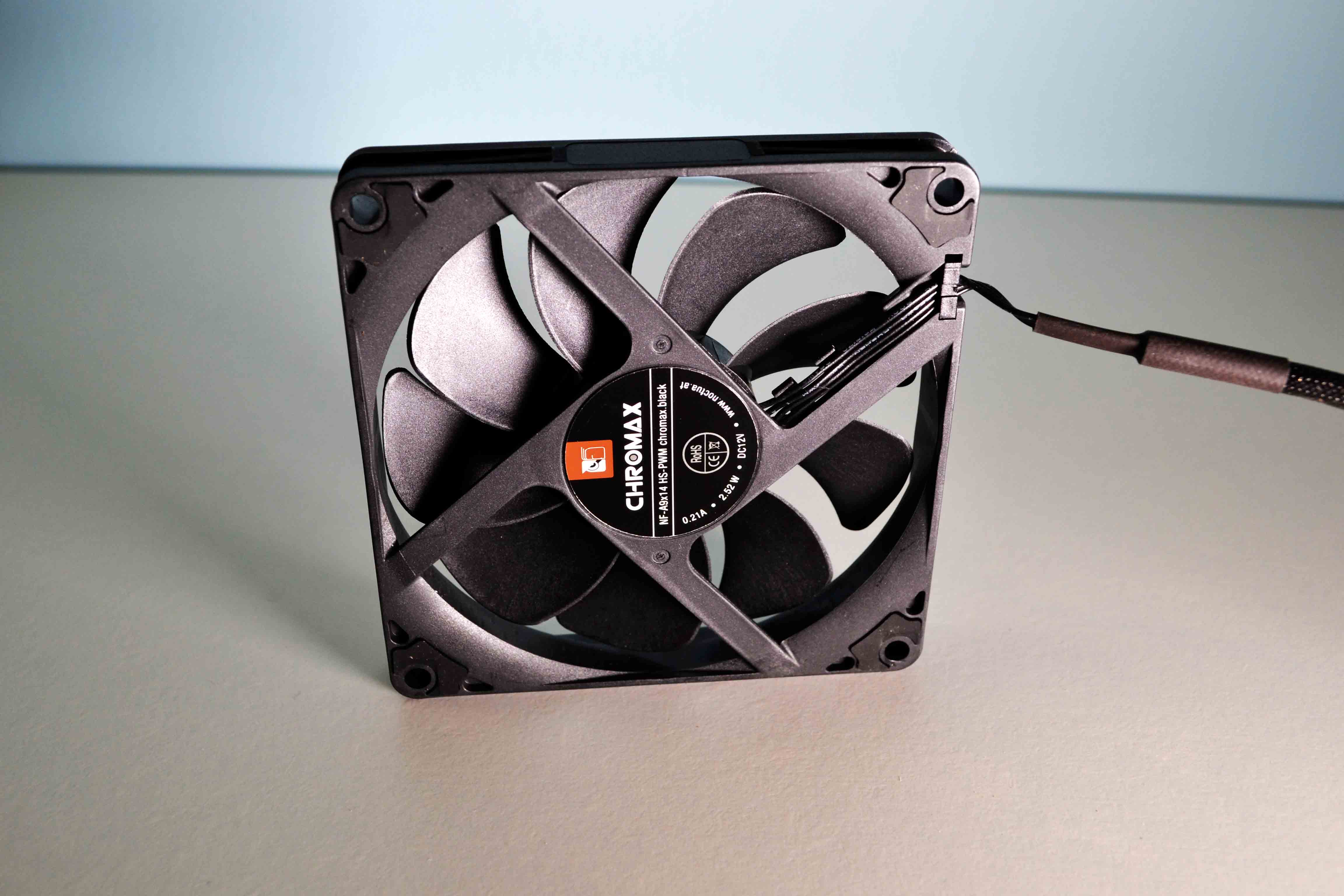 There is no branding on the front which is perfect to achieve that stealth look. 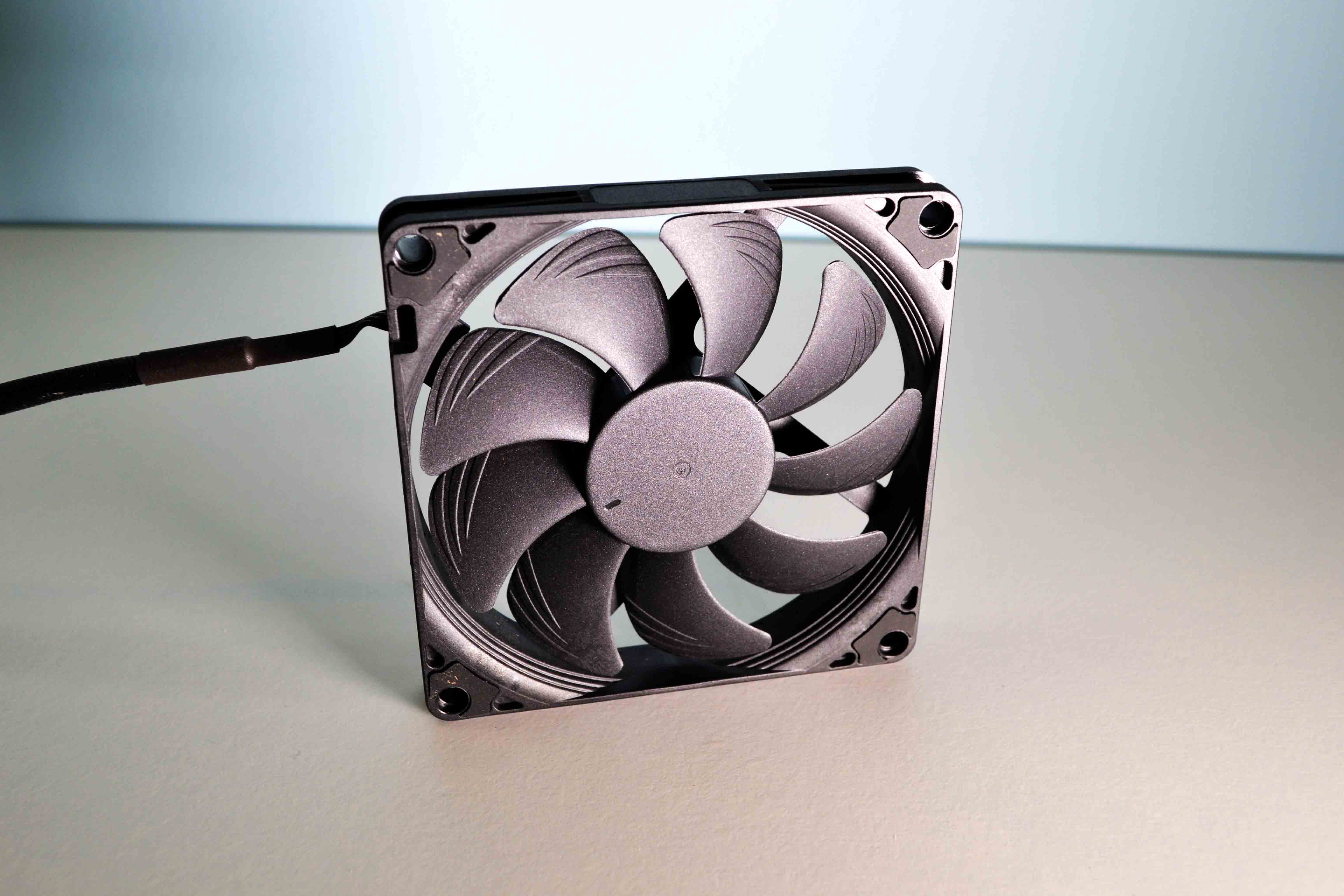 Here is a side by side between the original famous Noctua color combo. 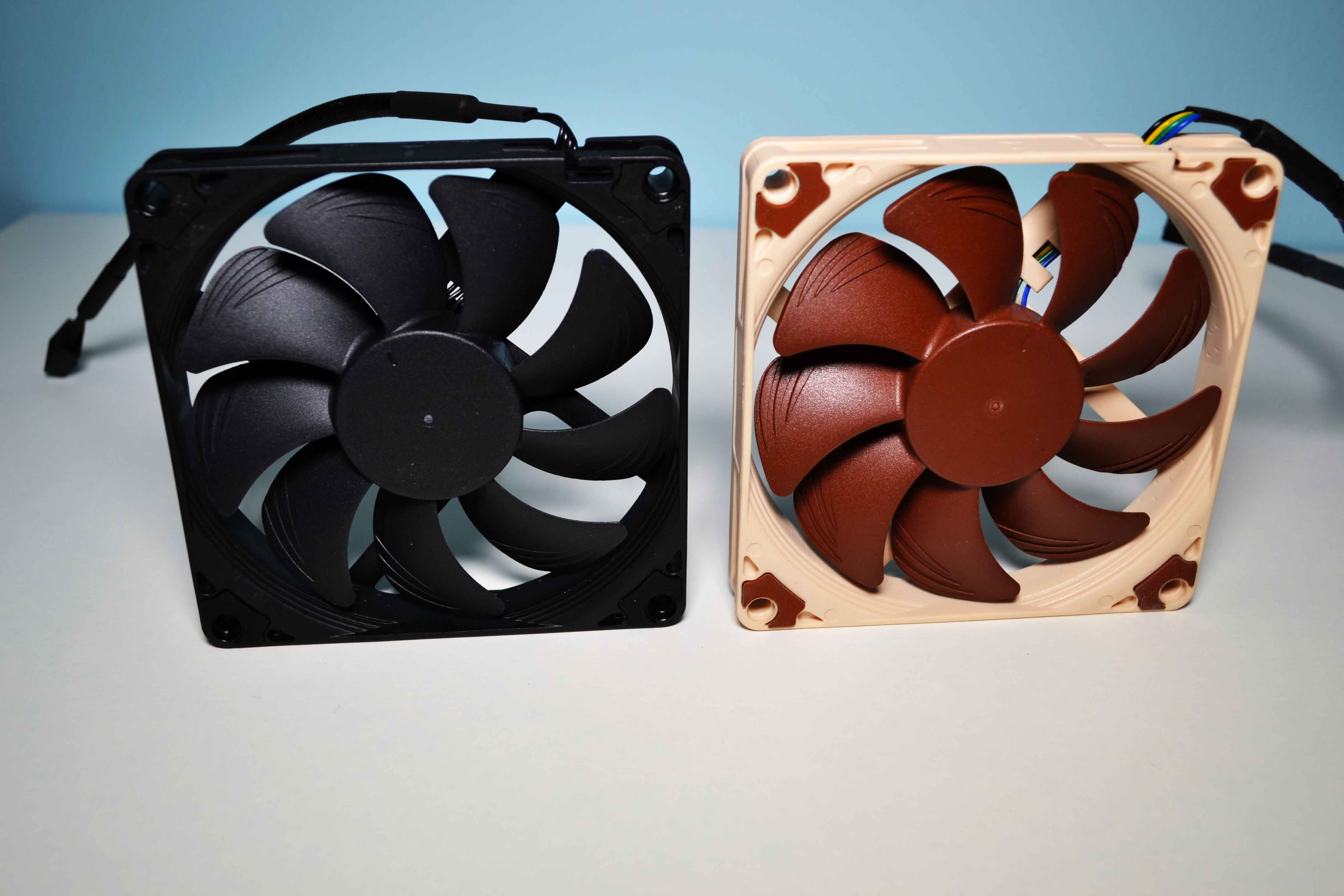 We know by now that the L9a had a longer heatsink instead of the square design as in all L9i models. 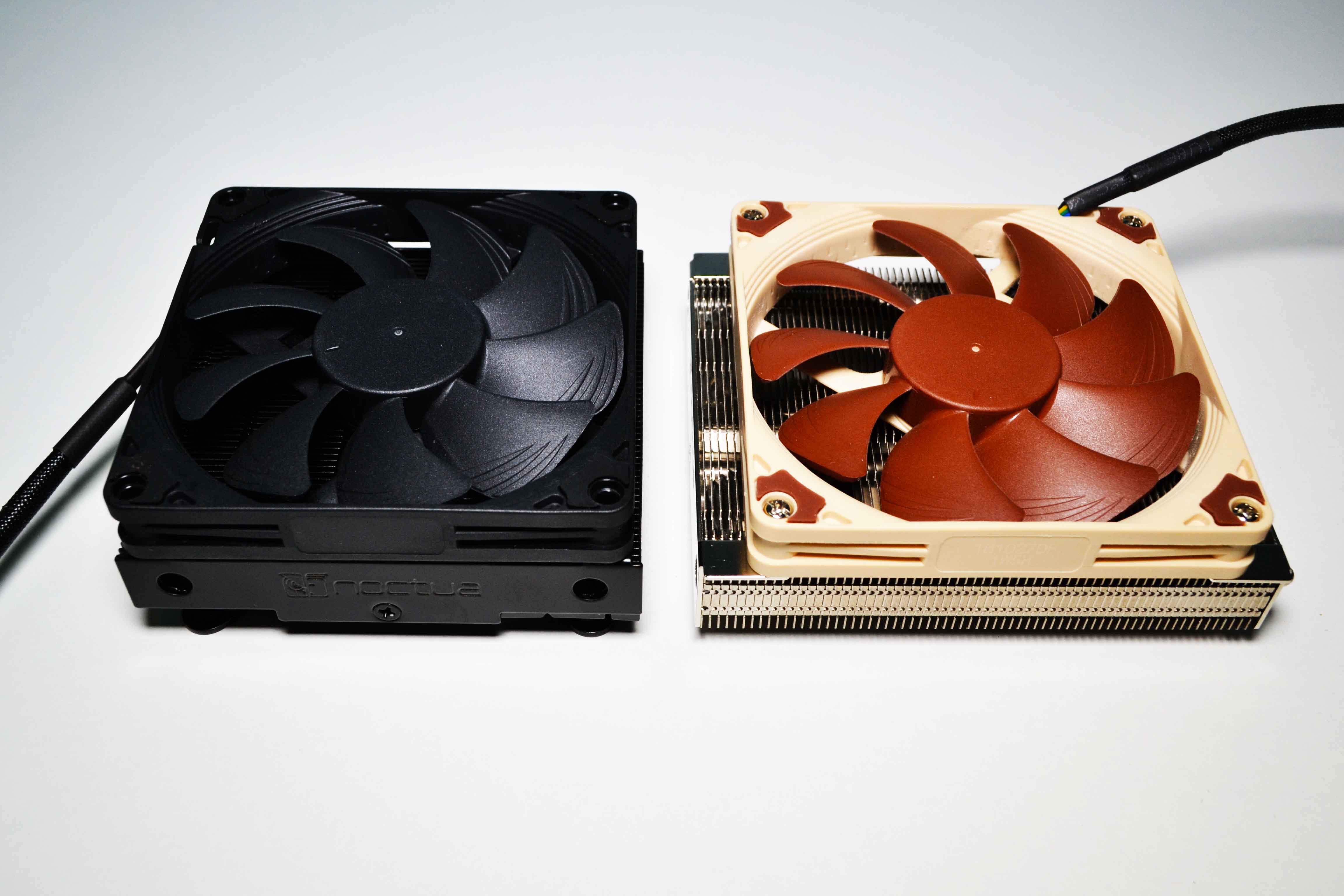 So if you want the L9i chromax.black on your AMD AM4 platform, you need to reuse the brackets from the L9a or order the kit separately. 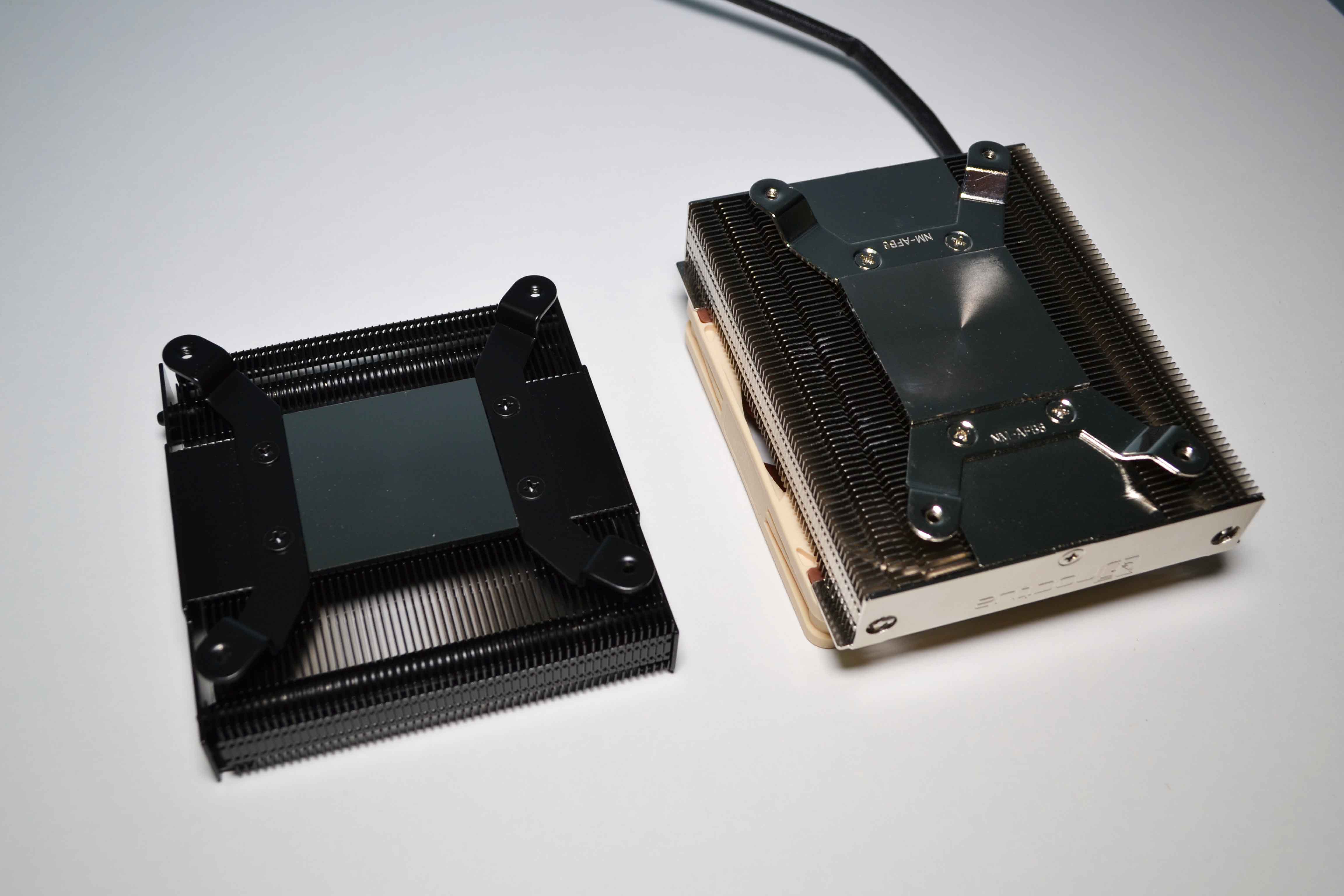 It’s a small price to pay by deviating from the perfect OCD realm to have the black heatsink on your Ryzen CPU, but it is so worth it. 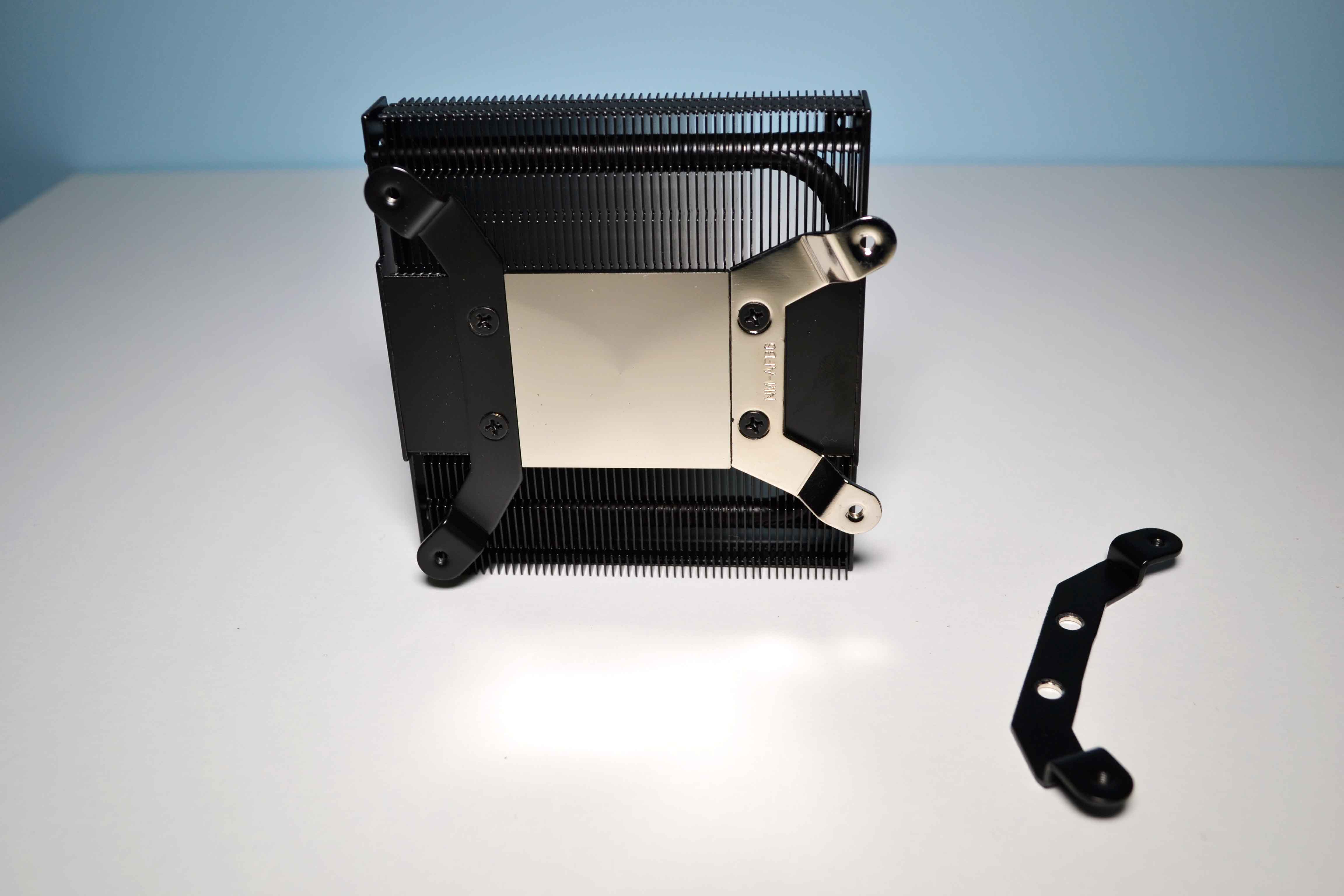 Also make sure you use the L9a backplate securing bolts since they have a different design to match the backplate. 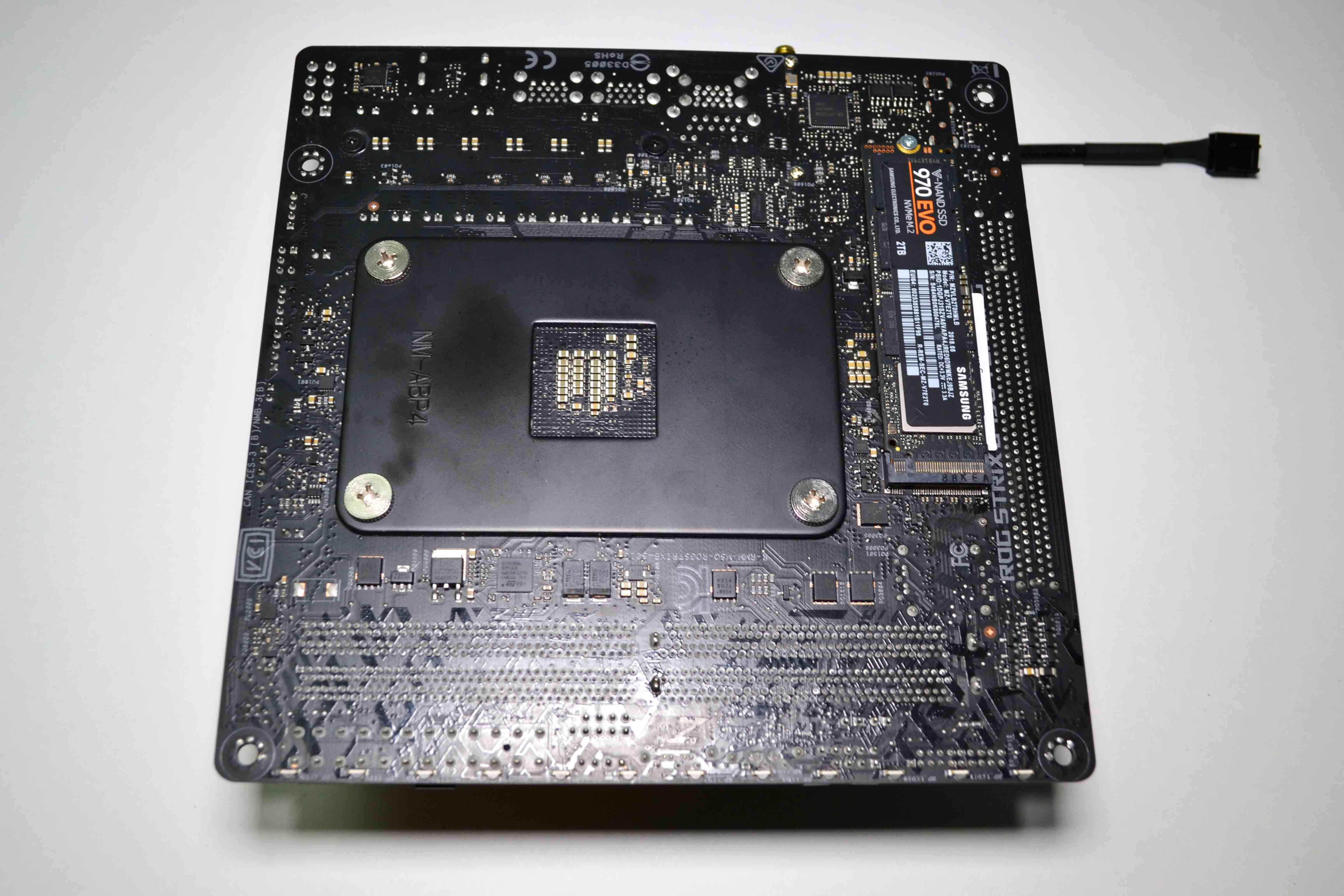 It doesn’t get easier then installing L9i/a coolers. Apply the thermal paste to your CPU, then secure the heatsink from the back of the motherboard – if it is on an the AM4 socket, use the included backplate or if it is on an Intel socket, just use the bolts. Done. The end results on a black board like the ASUS ROG STRIX B450i looks ridiculously good. 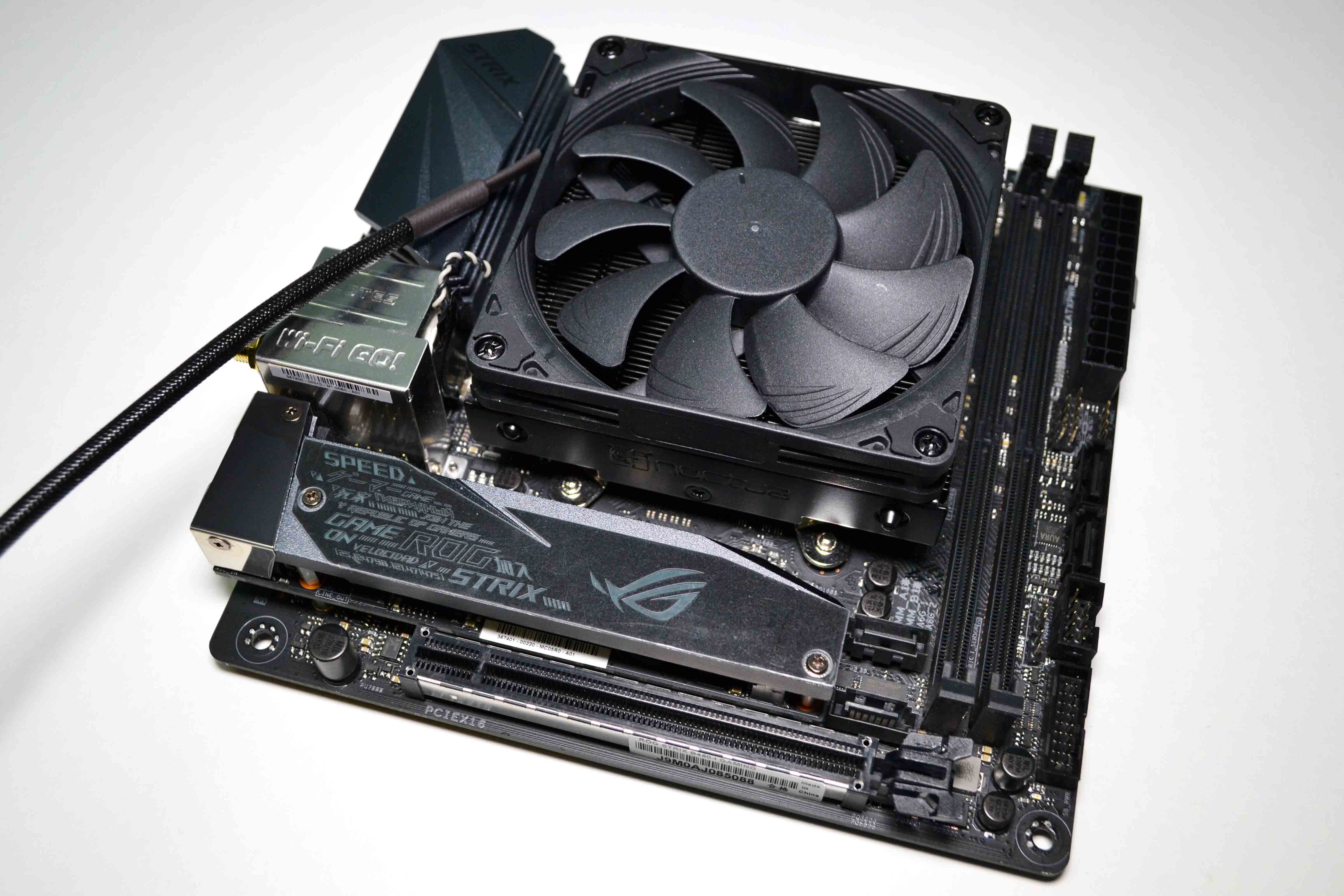 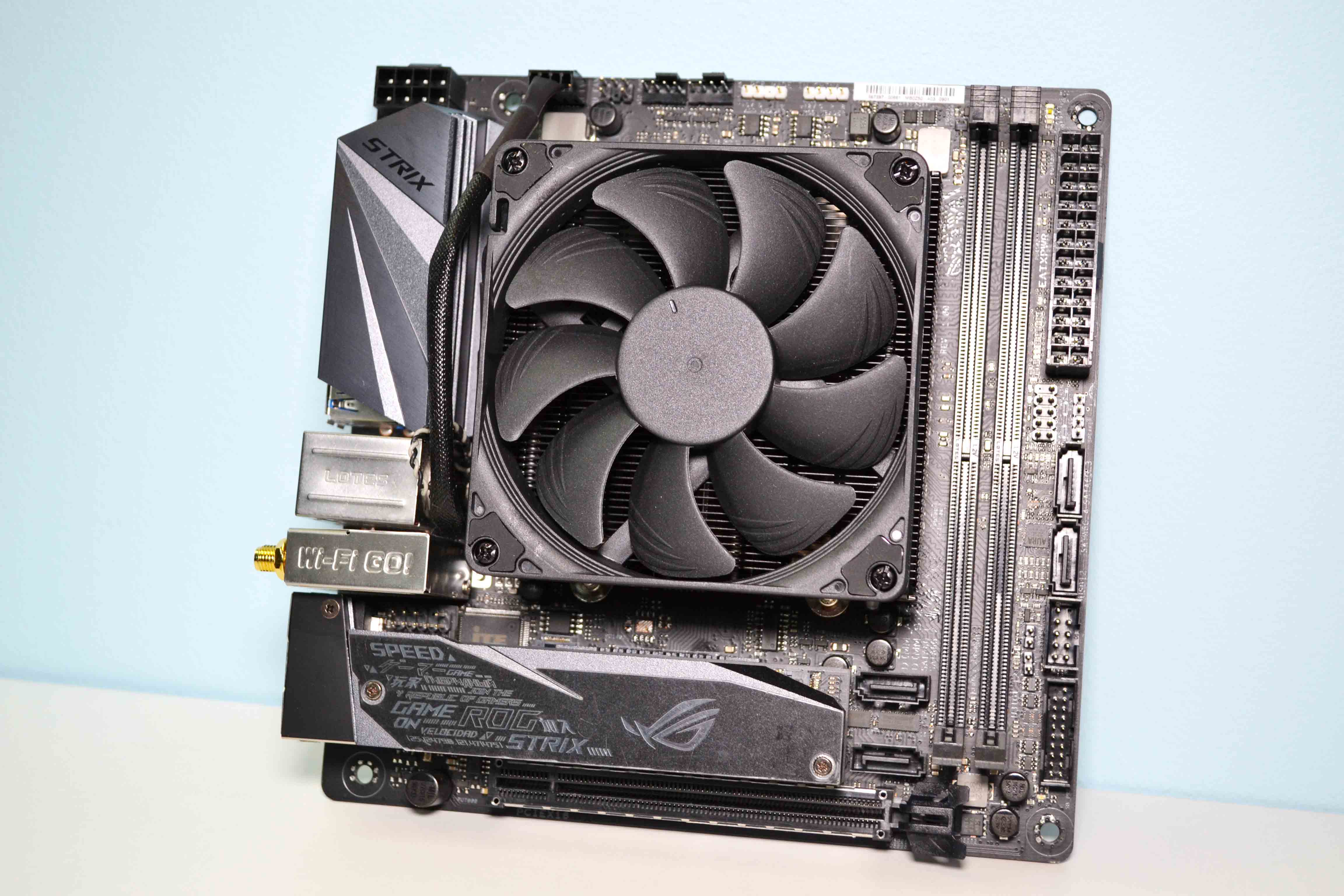 There is no compatibility issue of any kind even on such a tiny board. 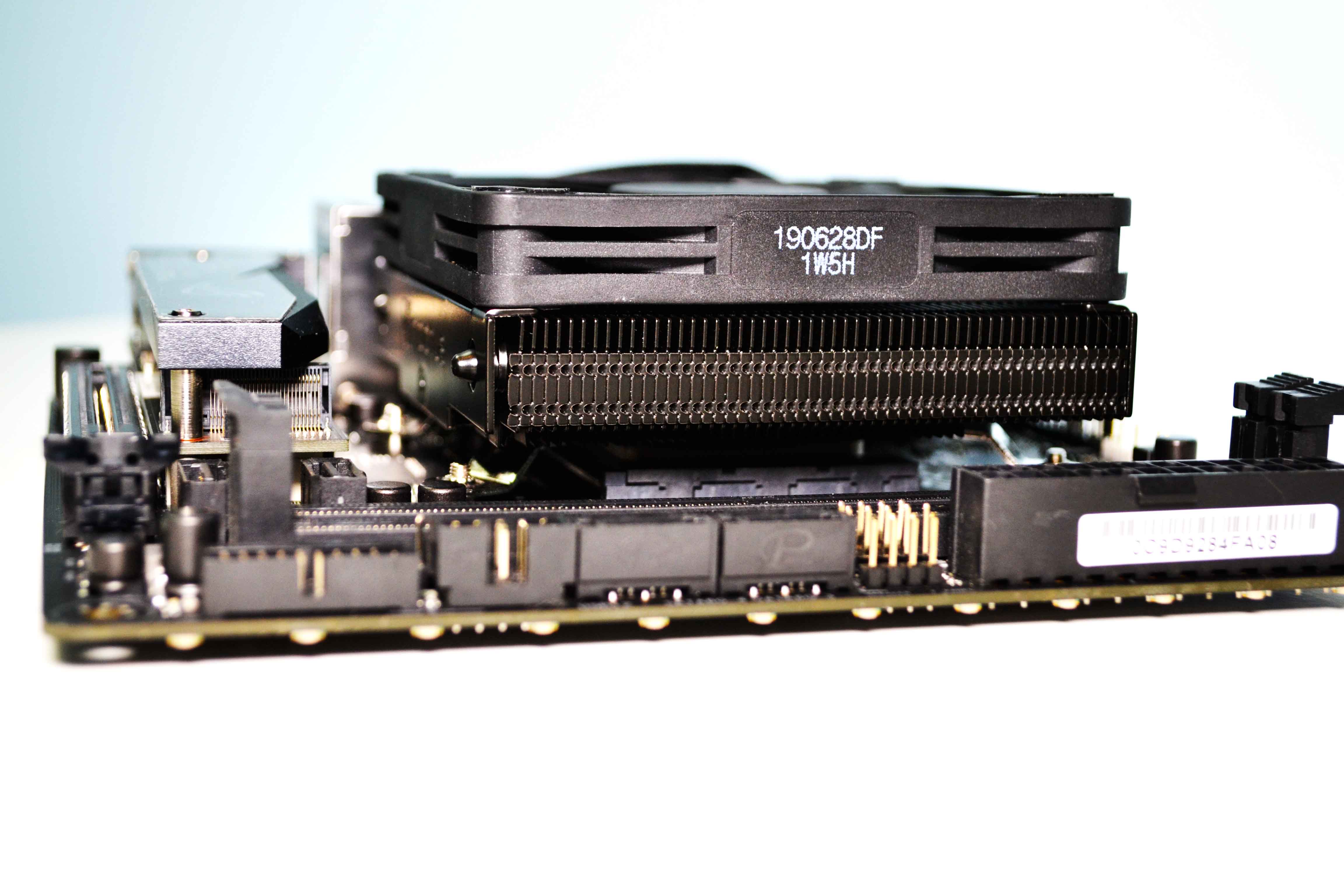 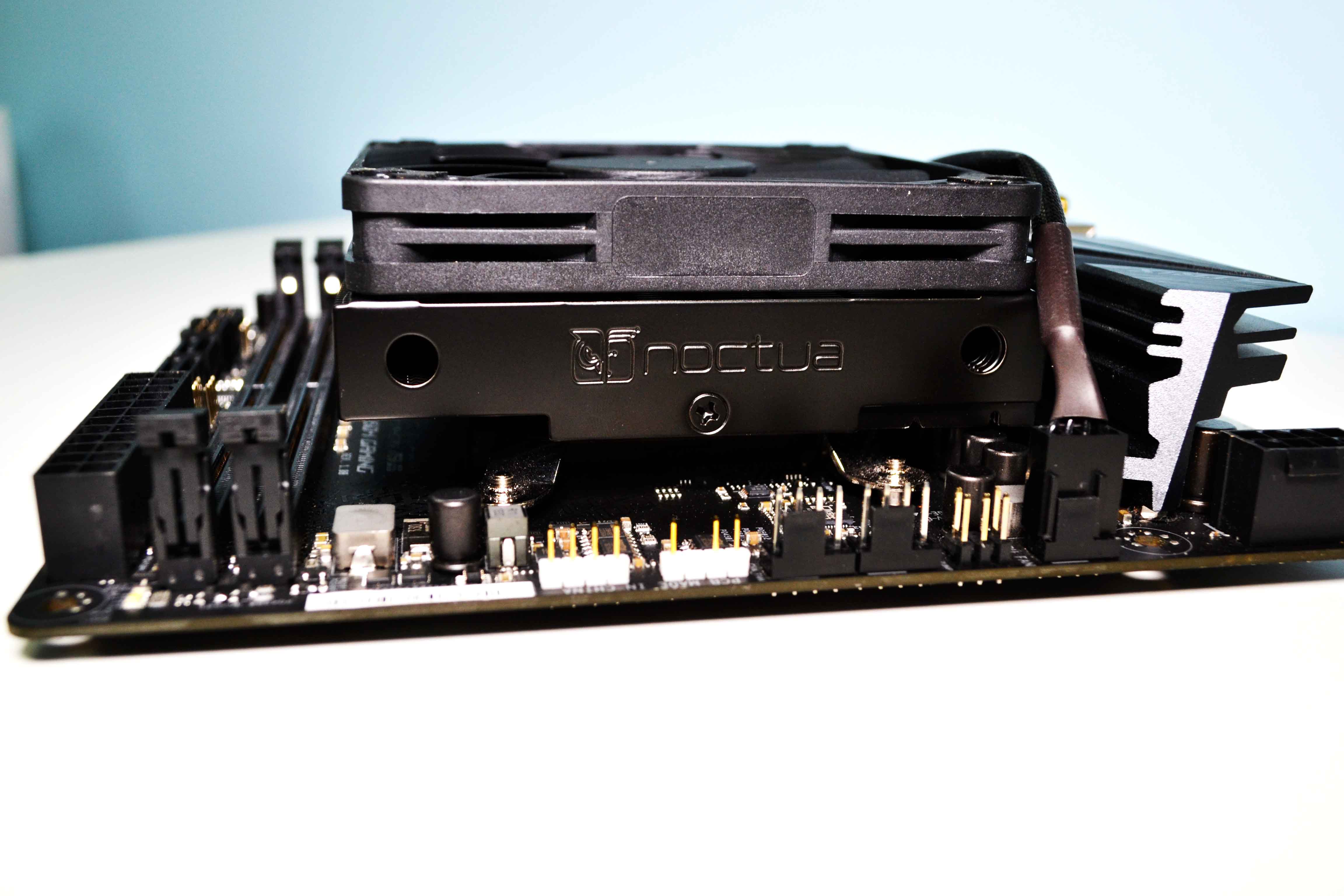 The AMD Ryzen 7 1700 8c/16t CPU will be tested in 2 main scenarios: at stock settings and then we will overclock it for 3.7 GHz for 1.25v. For both scenarios we used the built-in system stability and stress test from AIDA64 and followed by some CPU benchmarks. Any results over 90° C in any condition are considered a fail.

Ambient room temperature was a recorded at 18 °C.

We will compare the results of the Noctua L9i cooler, with its slightly bigger heatsink AMD brother variant, the L9a then with our new champion of low profile cooling (only if it uses a 120 mm fan), but this time we are using it only in its stock form, with the 92mm that came out of the factory, set as an intake. Finally we will throw in the results for the stock AMD Wraith RGB heat-sink as well.

Also for all scenarios there the side panel will be closed (besides the stock AMD Wraith Spire RGB cooler) and there will be an extra case fan on the bottom (Noctua 92mm slim NF-A9x14) set also as an intake.

For the noise test the fans will be set on the auto % rpm curve. Then placed at 30 cm from the setup was our Pyle PSPL01 noise meter. For the synthetic tests, a GPU with fanless mode is used and we will turn of any case fans to reduce any extra interferences. 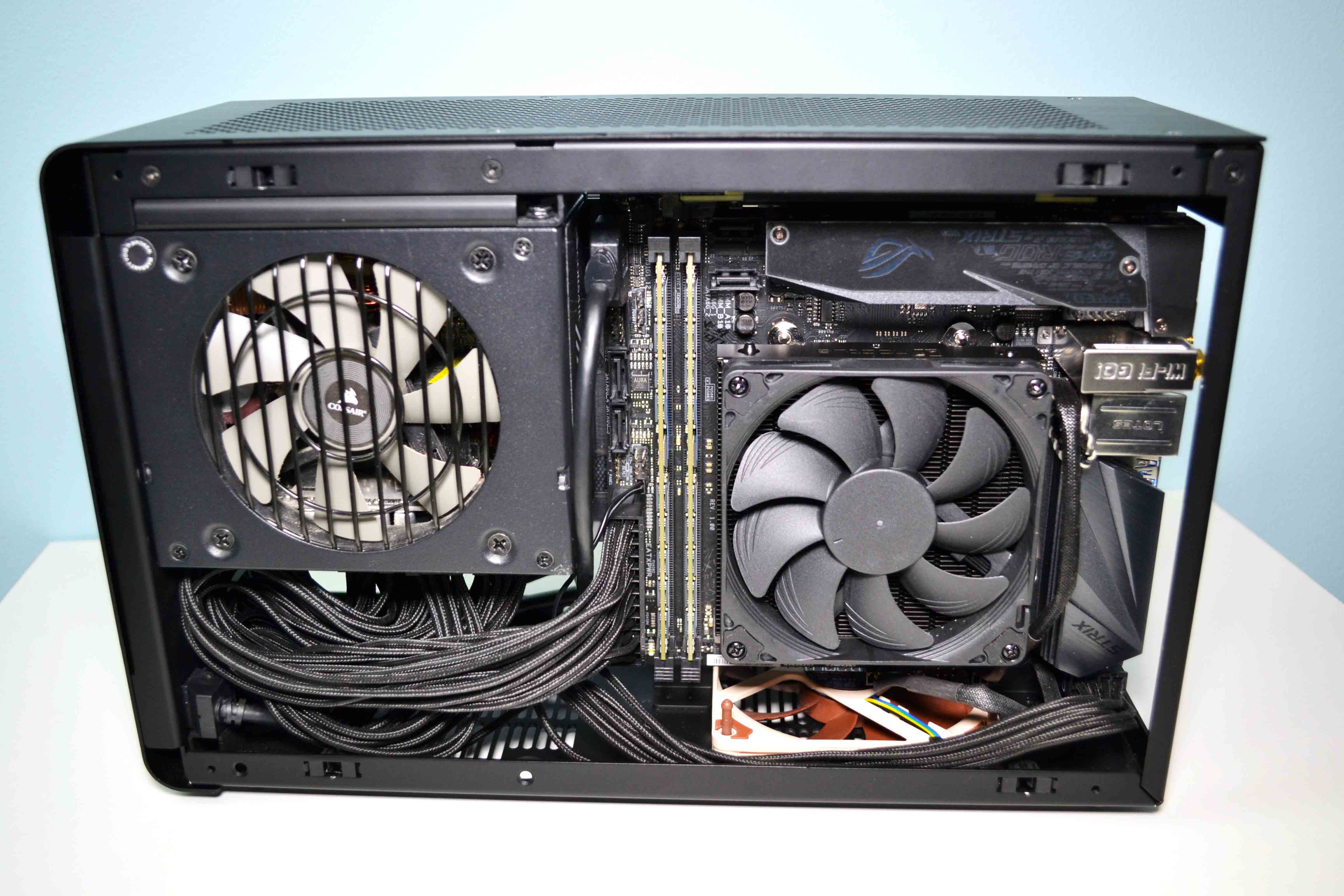 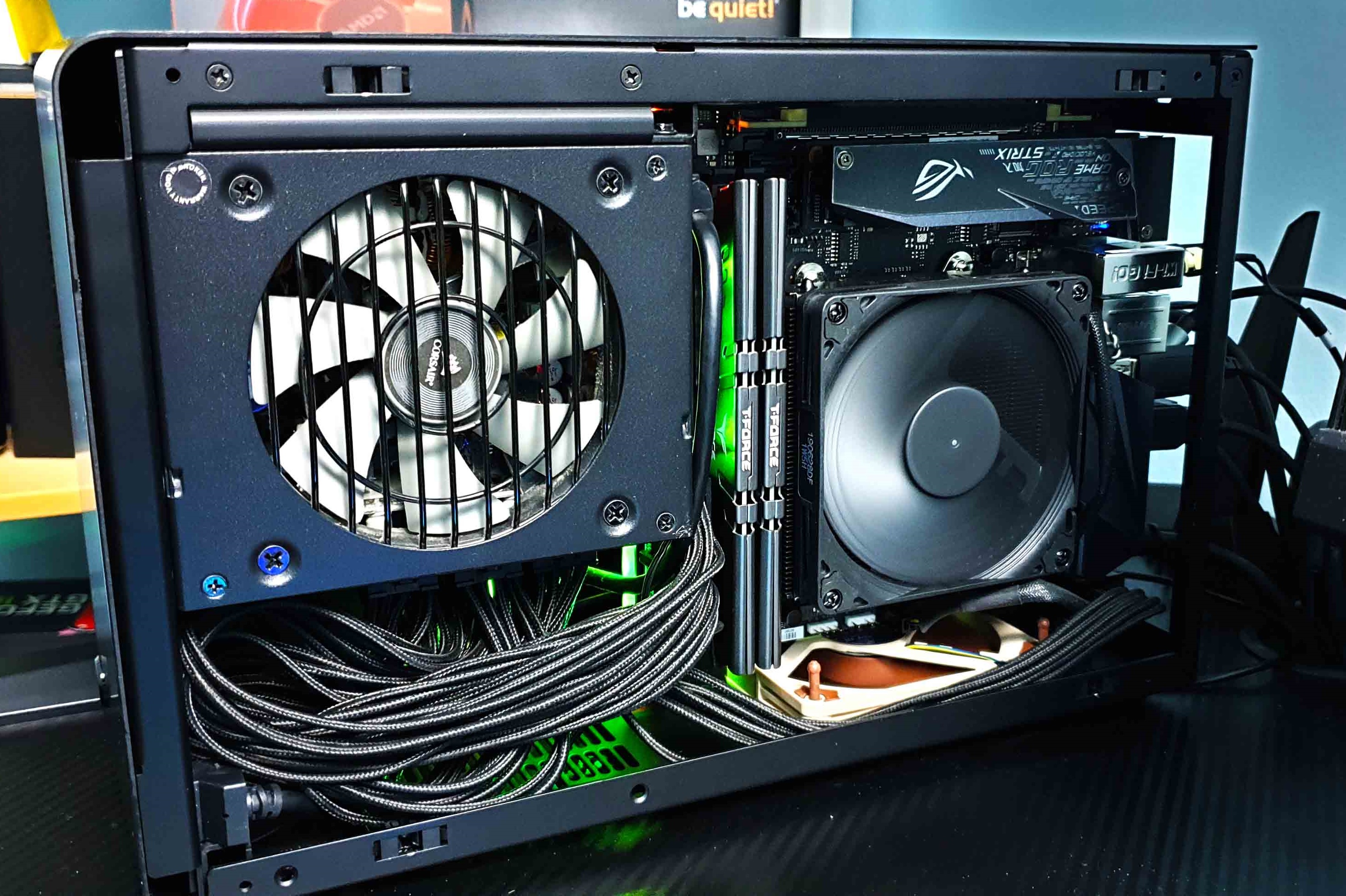 Resolution for our test game Assassin’s Creed: Odyssey, is set at 1920×1080 with everything cranked to the maximum quality settings and the refresh rate is locked at 75 Hz.

Let’s start in order of CPU load difficulty. First up is Cinebench R15. On the left is the Ryzen 7 1700 in stock form while on the right we have the results for the overclocked scenario – 3.7 GHz @ 1.25v.

Then Cinebench R20 is a more modern up to date multi core benchmark suite. So naturally we will see a bigger load and thus a larger temperature figure that R15. Here the Black Ridge takes the lead in OC just because it can spin to a higher RPM but at the cost of being louder.

In AIDA64 we isolated the stress test just for the CPU and thus we should get the highest stress scenario for the CPU. Mind you R20 proves to be almost as demanding as the stress test so the numbers are very close. The L9a so far only in the OC scenarios beats the L9i just by one degree becasue of its longer heatsink but realistically so far they are the same. 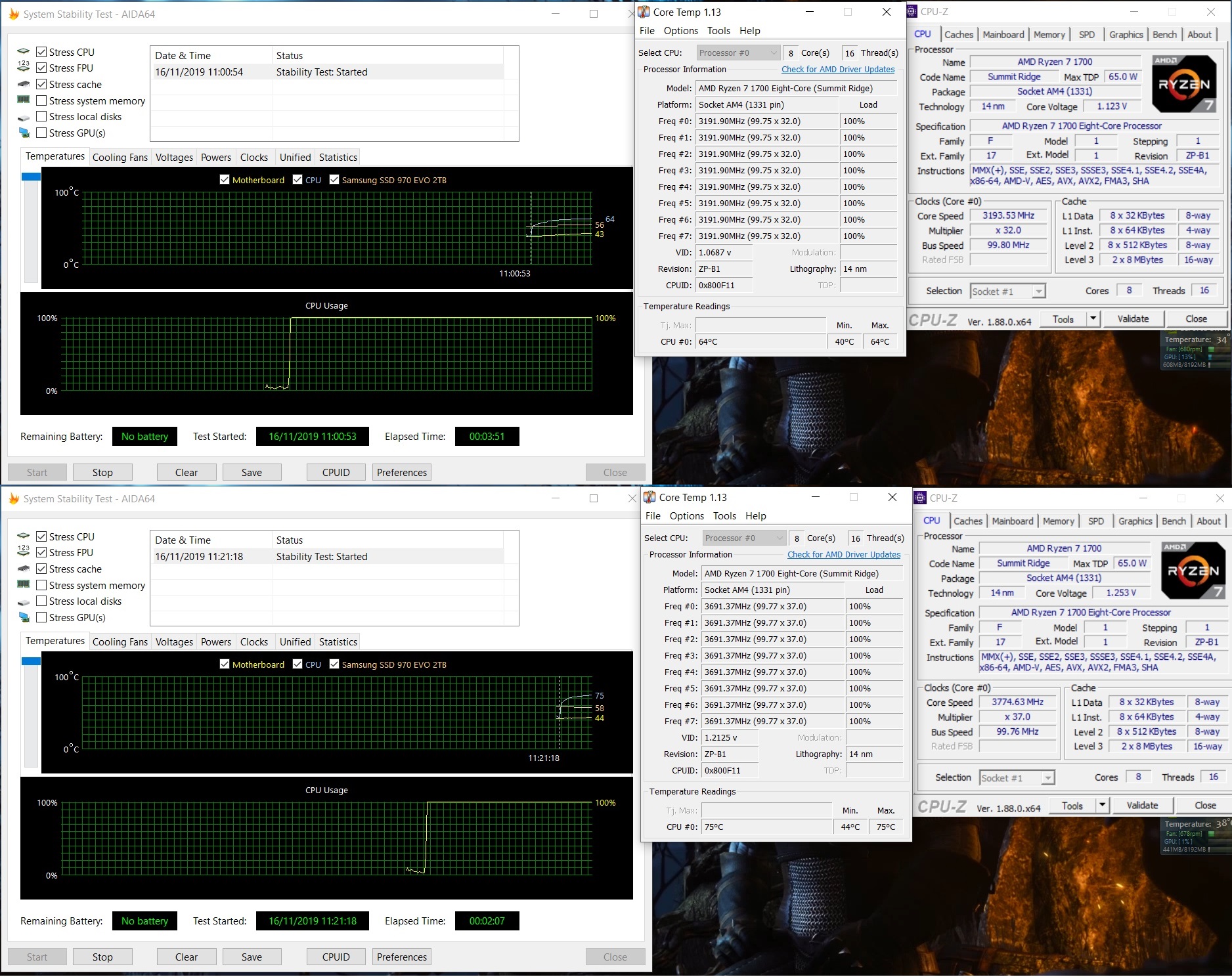 When it comes to games, everything is under control even when the CPU is overclocked. Again don’t forget that the stock AMD cooler is very tall so it just sticks out of your case and it is very interesting to see that Noctua with just 37 mm in height can match the stock cooler at almost double the heatsink size and fan thickness. 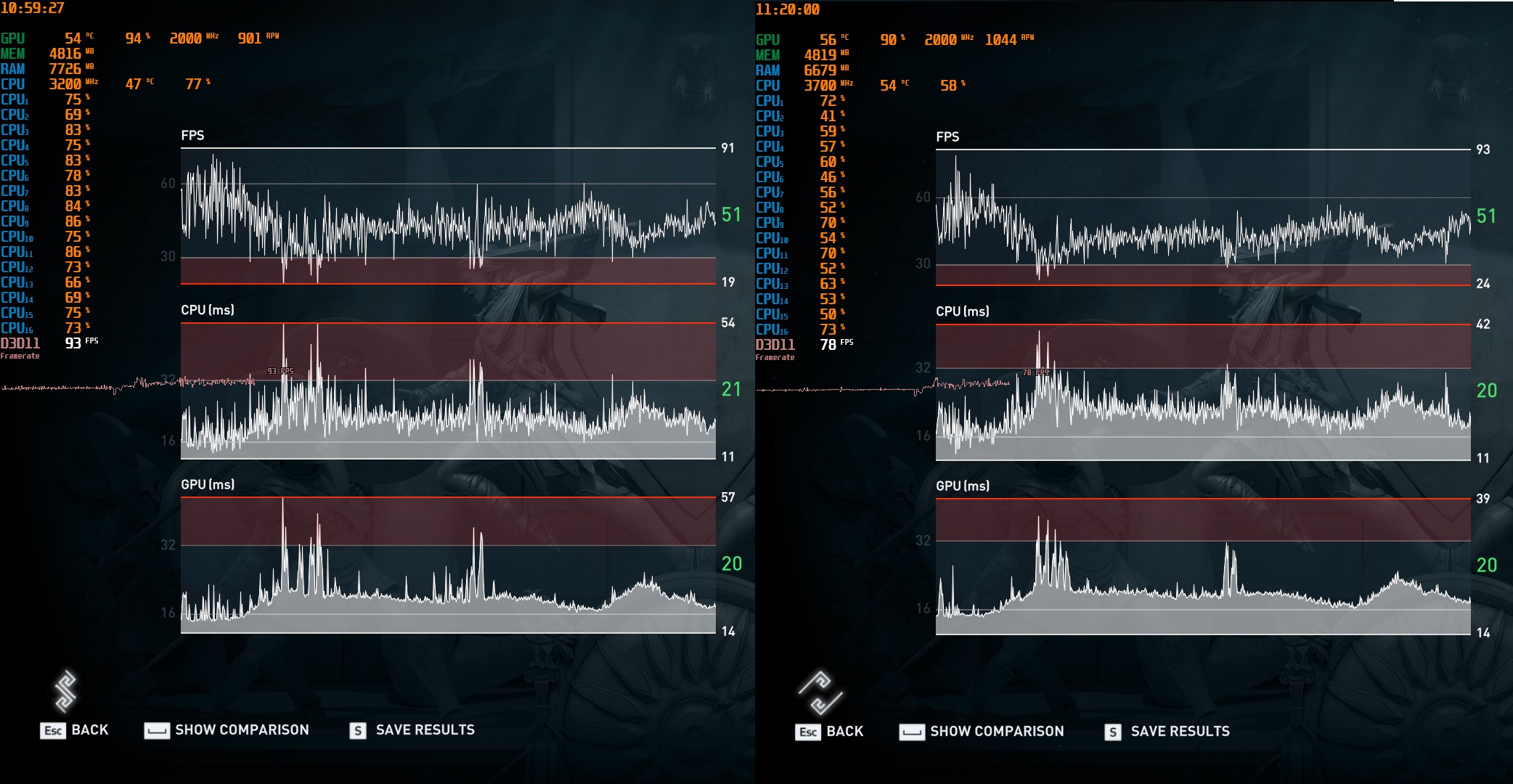 Despite the fact that the L9i/a are not designed to handle CPU’s that are over 65W in TDP, it still managed to tame our test CPU even when overclocked. Of course at 100 % RPM the setup is no where near silent but it is still better than the competition. Our Ryzen 7 1700 in stock form is perfect for the L9i chromax.black, especially in a SFF case like the DAN A4-SFX, where we managed to achieve the best cooling and noise combo possible.

Overall, the L9i chromax.black delivers the same performance as the L9a despite the latter having that longer heasink. The Black Ridge only wins because its stock fan ‘revs’ higher but at a jet-engine noise output. So the Noctua wins hands down when it comes to noise output while still managing to keep our 8 core CPU under safe temperatures even when overclocked.

I will keep this short, the Noctua L9 series still is the best option at this tiny height because it offers the best combo of performance and low noise output, of course officially up to 65W TDP. Adding the new chromax.black to the mix, finally we have a neutral color option to match most of our builds. It just looks absolutely gorgeous in black and it truly is a must have low profile CPU cooler if you don’t use high TDP CPUs. But, as we saw, it doesn’t stop it to take the challenge and keep things under control even when we overclocked the Ryzen 7 1700 at 1.25v. Last time it was just shy of our perfect mark, but this time, because of the chromax.black transformation, it gets it !

– Maybe include the AMD brackets given its higher price, until/if they release an all blacked L9a as well

Glob3trotters “Best Overall” Award – 5 out of 5

Many thanks to Noctua for supplying us with this jewel !