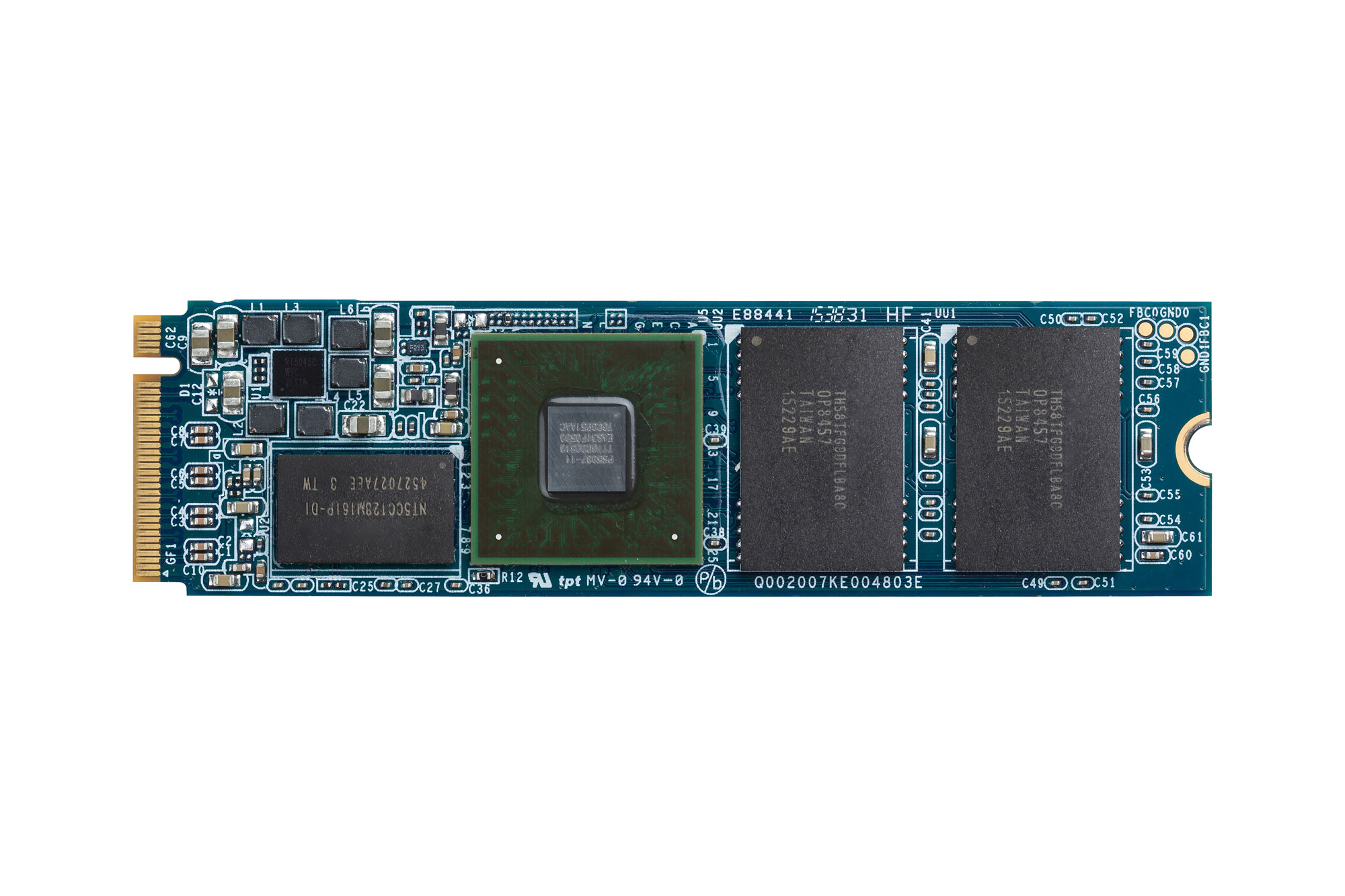 Regular hard drives at one point in the future they will have the same fate as other technologies and formats like the floppy disk, CRT monitors etc. They will be superseded. The storage area was for many ears the last bottleneck due to the mechanical design aka moving parts and thus they were limited physically.

All of the main components like CPUs, GPUs, RAM, motherboards, new interfaces, new protocols etc were reaching new heights in term of performance but the HDD was still stuck in the stone-age. Although hard drives still are used for massive storage because of their low cost per GB, I have a feeling things will change very soon due to SATA SSDs gaining terrain so fast and of course because of new products like the new M.2 form factor.

They didn’t call it Next Generation Form factor (NGFF) for no reason. There are multiple interfaces for SSDs from the regular SATA 3, then to the SATA Express which came along but it wasn’t a success; then we have U.2 format basically the M.2 with a proprietary cable connection. But nothing beats the M.2 in terms of elegance. Most motherboards since the Z97 chipsets support the M.2 NVMe SSDs natively.

And so today we have Apacer with their Z280 M.2 PCI-E series that aims to be at a good balance between performance and price.

Apacer was founded in 1997 and, from its earliest stage, positioned itself to be an agile supplier of DRAM whose primary operations focused on “memory modules.” Reliant upon the semiconductor’s complete vertical integration of the memory modules’ technical capabilities with its professional marketing services, Apacer successfully created its own global brand and had become the world’s fourth largest memory module manufacturer by 1999.

So the Z280 is Apacer’s solution for NGFF SSDs. Because it supports PCIe Gen 3 x4 and is compliant with the new NVMe 1.2 protocol, it allows the drive to perform much faster, with far more queries, and with less CPU utilization than traditional AHCI-based drives (like the regular HDDs and even the SATA SSDs)

And of course it has S.M.A.R.T and SmartRefresh for data protection and built-in global wear leveling.

But this is what truly got my attention: the Z280 series has MLC NAND which which means that is has a better endurance than TLC; the later which is so commonly used nowadays in this price bracket to keep costs down but at the cost of everything else. Hence, kudos to Apacer for using MLC cells.

The drive comes in a small box with a transparent window on the front so you can clearly see inside the Apacer Z280 240 GB M.2 SSD PCI0E x4 3.0 NVMe drive. 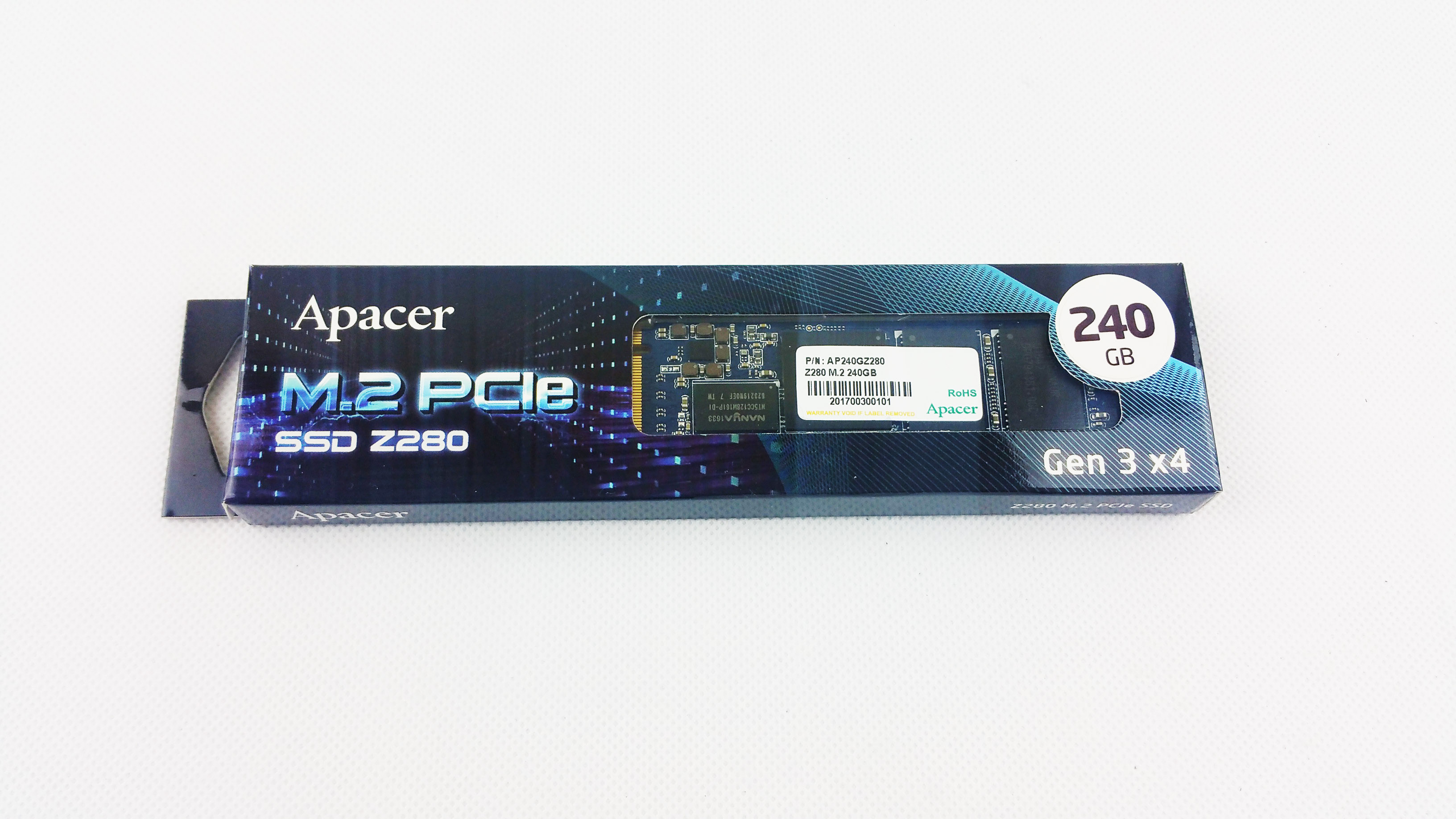 On the back we find out that it is compatible with any modern operating system and that it’s made in Taiwan. 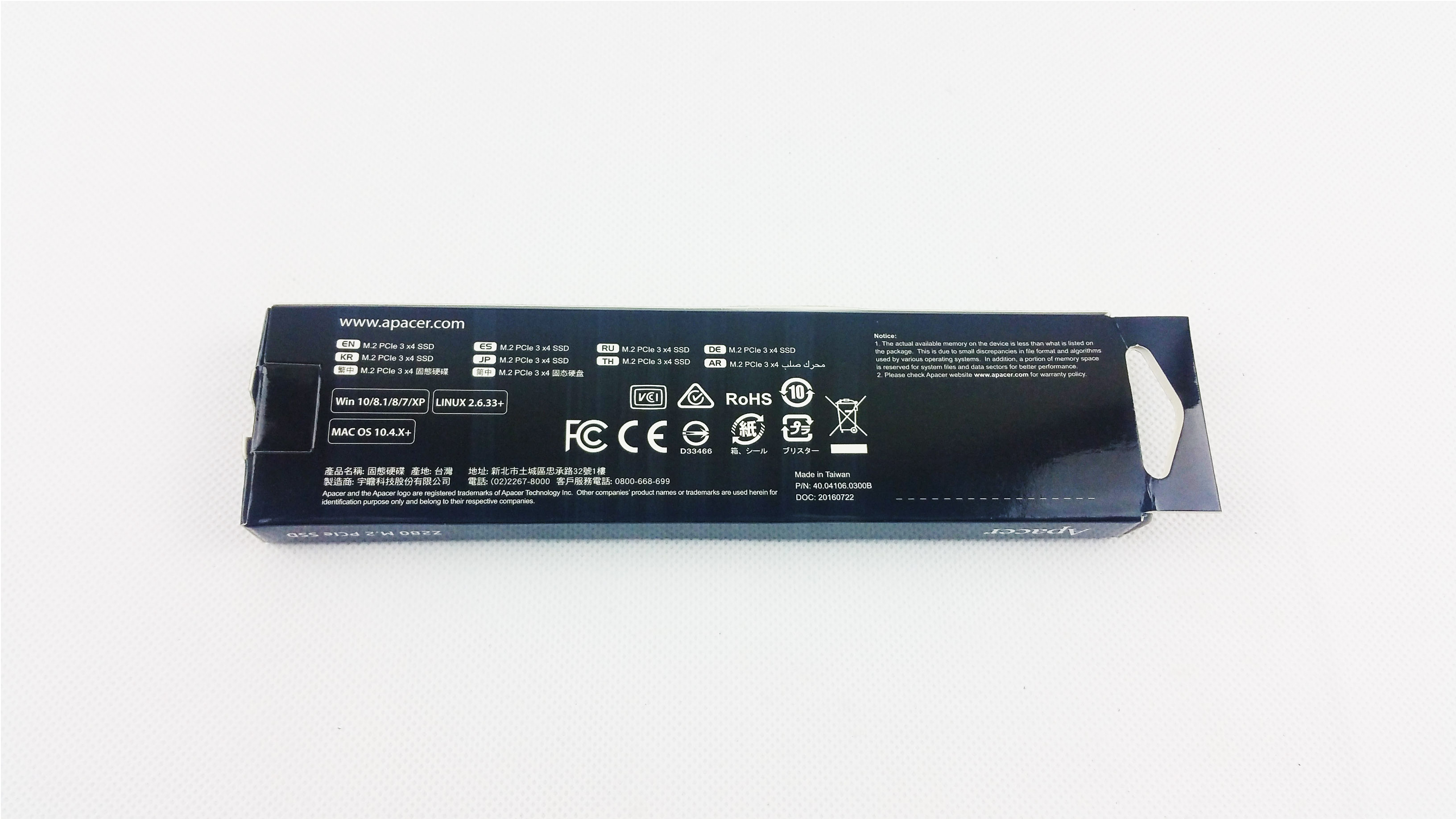 The drive is securely nested in this plastic shroud. And that’s it, no other accessories are provided. 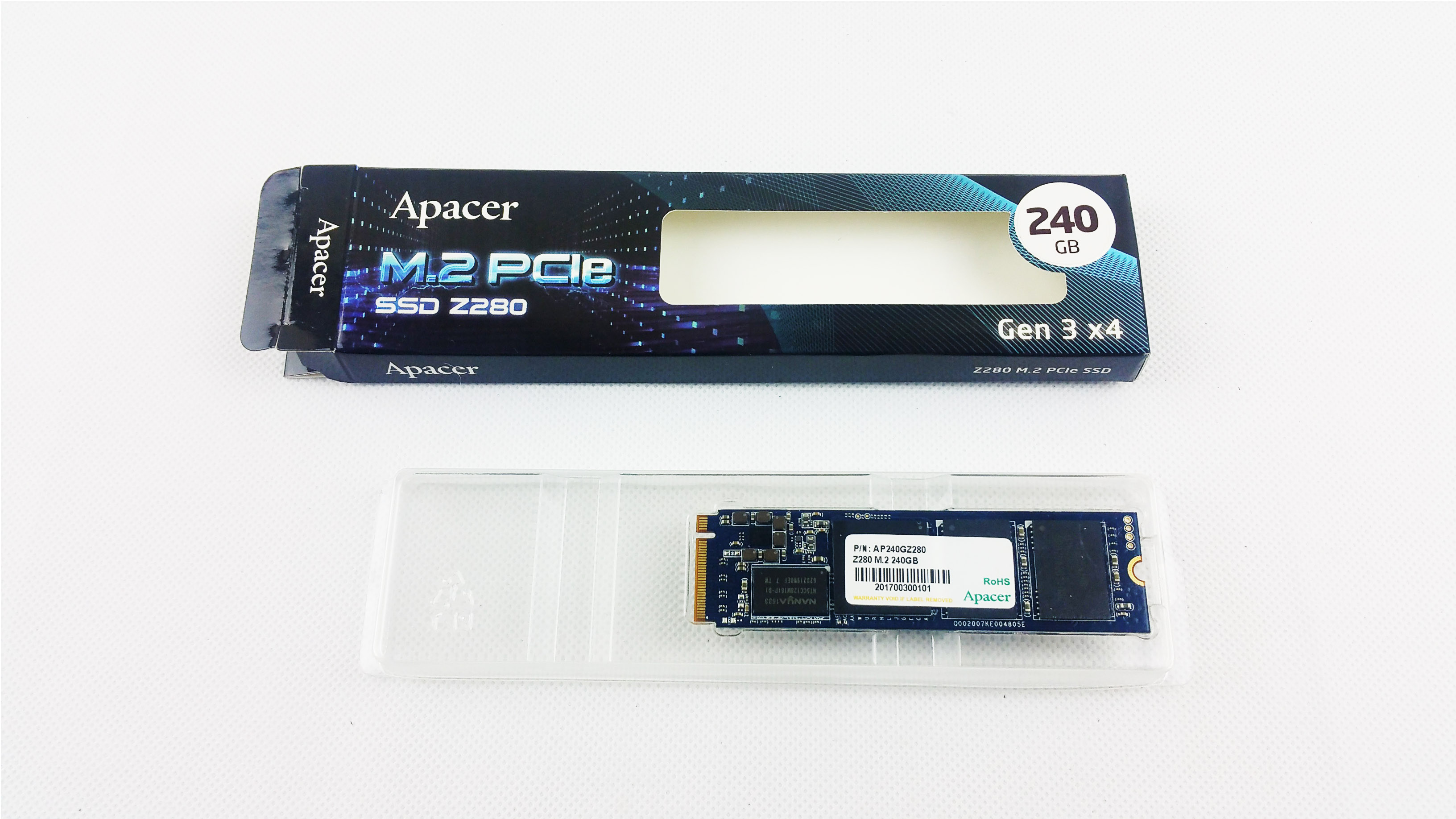 Zooming in and under the main sticker, we learn that the MLC NAND is connected to a Phison PS5007-11 controller. 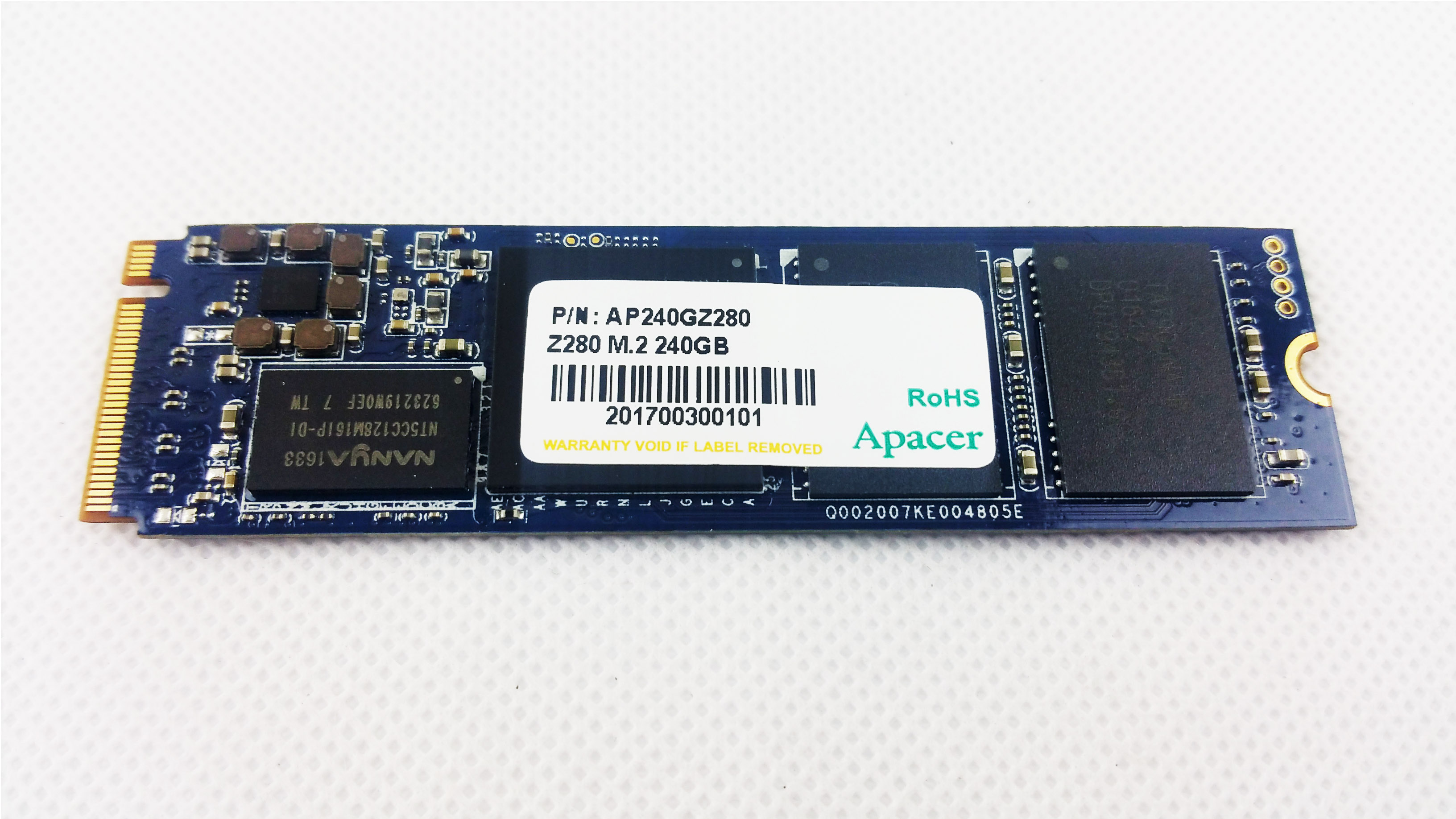 Th standard M key connection, on the right side and on the other side is how you secure it into place via a screw/bolt depending on application. 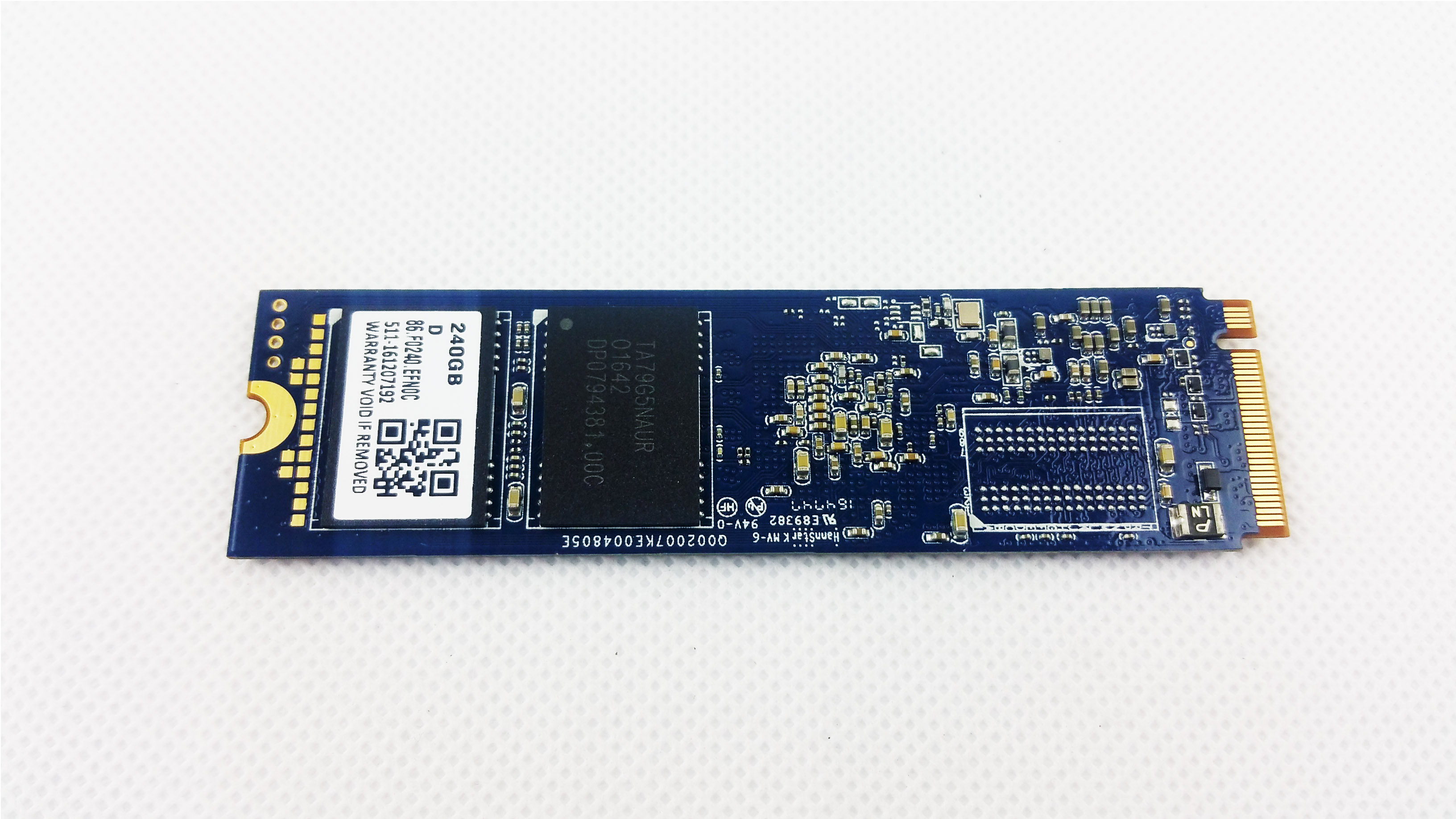 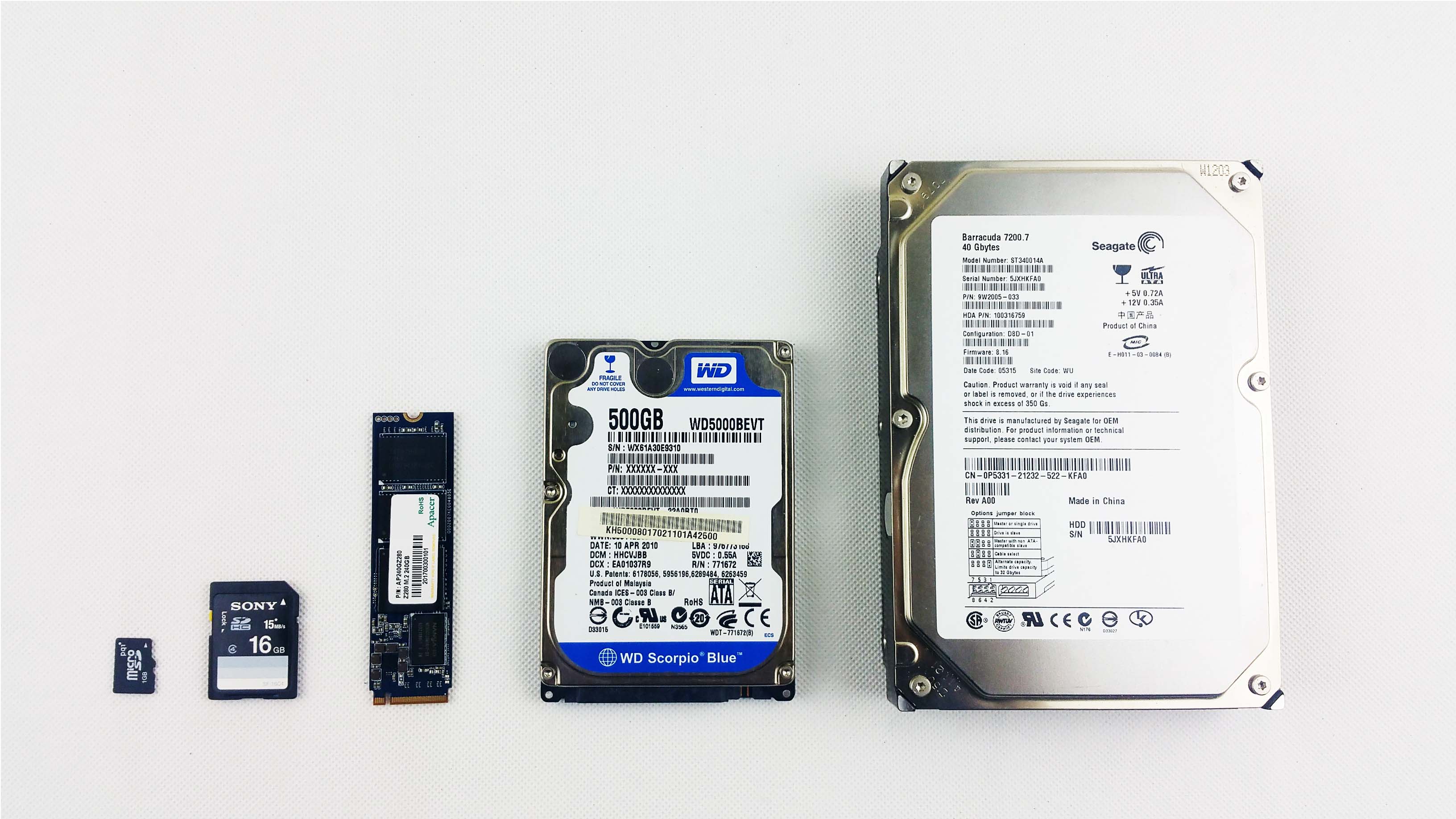 And let’s find out it performs.

Synthetic (benchmark) tests and some real life file transfers. All of these are meant to cover almost any scenario and to fully test the drive.

Both the M.2 and the test SSD SATA drive, were tested with 40 % occupied space, again to simulate as much a real life scenario as possible. No point in testing a regular HDD because it is far to slow for this tests.

A great advantage with Windows 10 is that is has native NVMe drivers and support. But if you are running older version of Windows, Apacer include drivers for that as well, and they (x32 & x64) can be downloaded here.

All high end motherboards from the Z97 chipset will offer a native M.2 slot. Ours is older than that but there is a quick and cheap solution. Grab a generic M.2 to PCI-E adapter (that supports NVMe) and then install it in any free x4, x8 or x16 PCI-E slot on your motherboard. 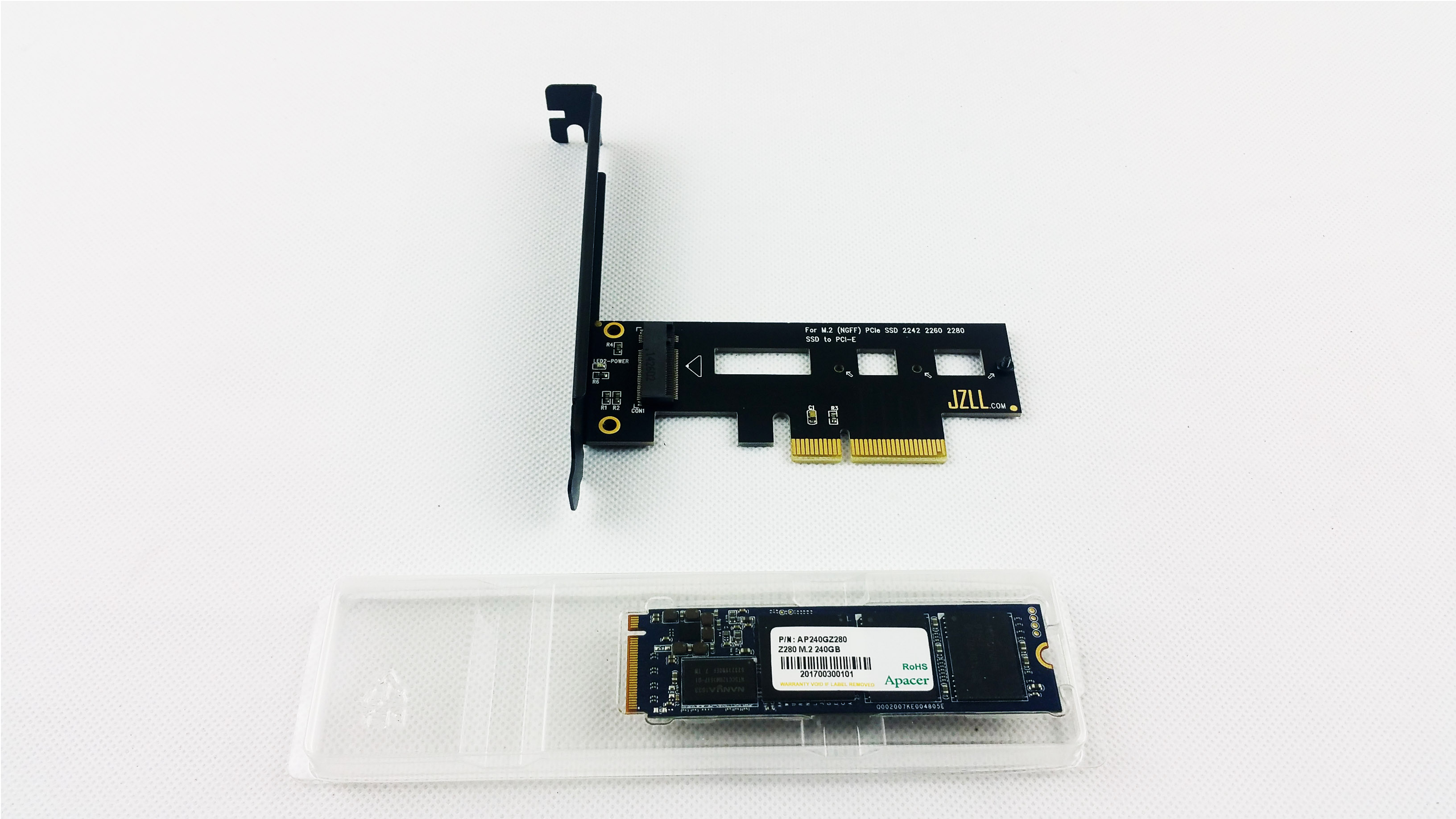 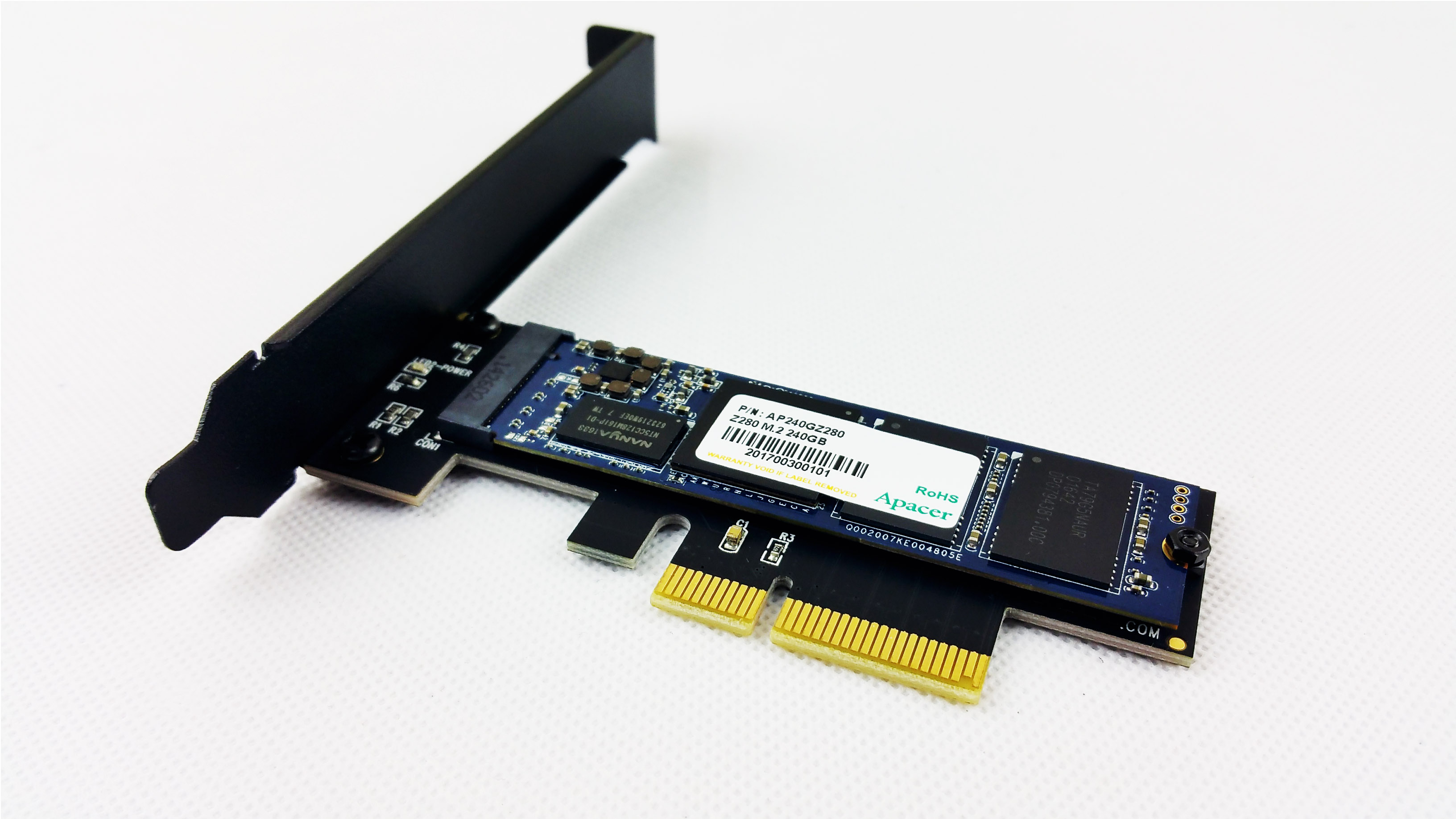 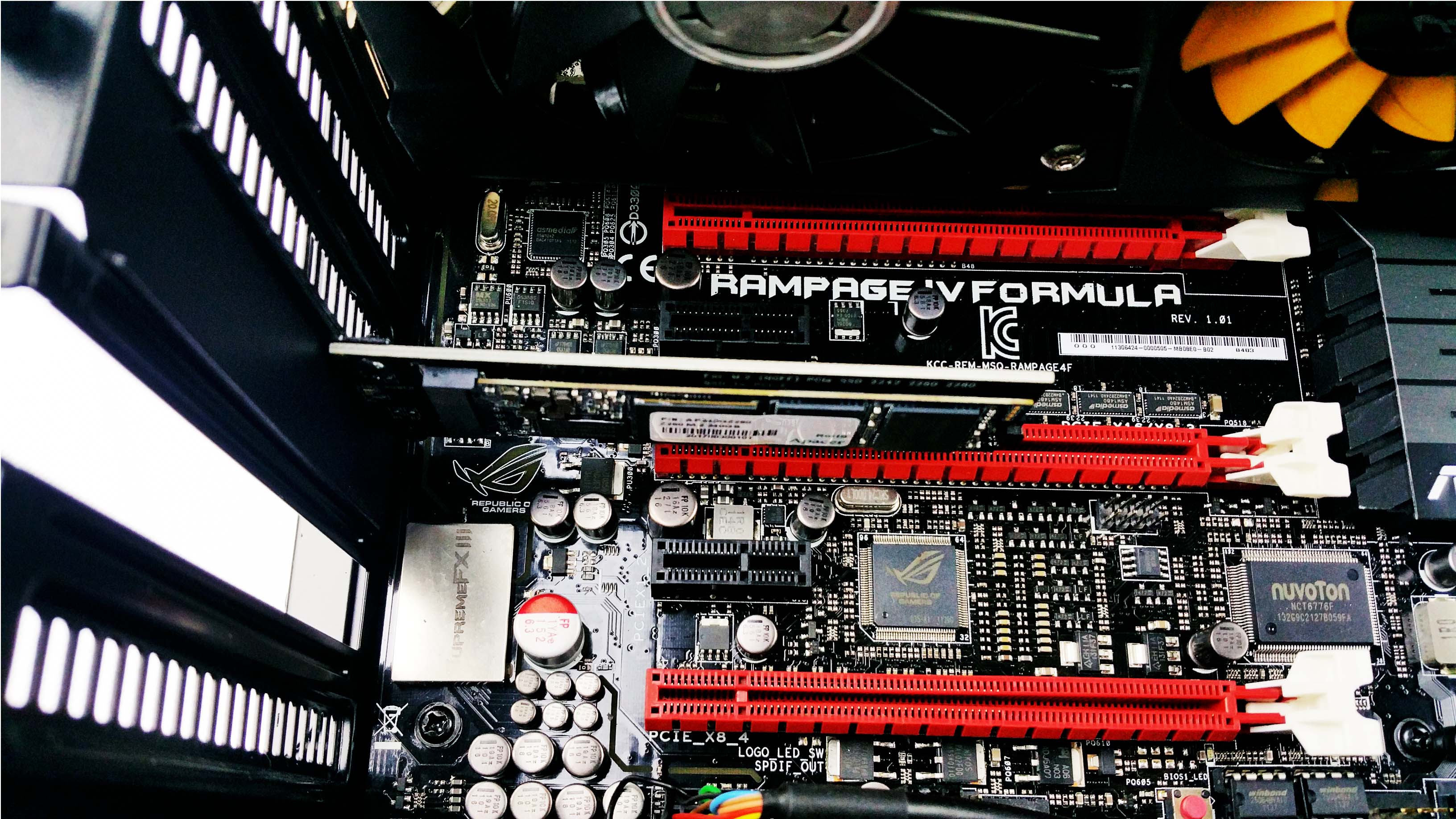 Windows 10 will recognize the drive but you have to format it like this:

Ok then. Now that it is installed an up and running, let’s begin our trials.

First up, we have the Crystal Disk Mark. A popular benchmark tool to see the maximum theoretical read and write speeds in various conditions. 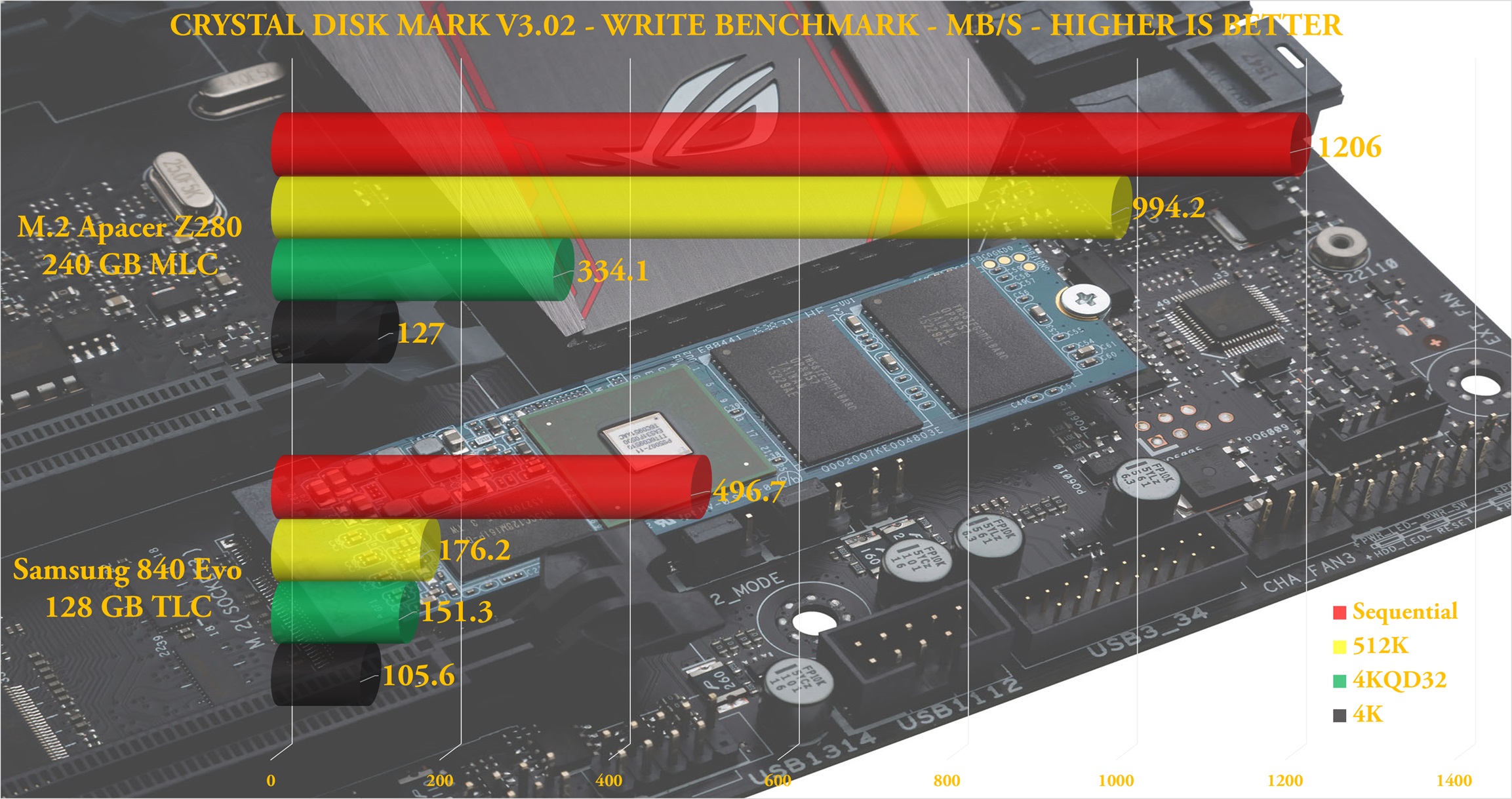 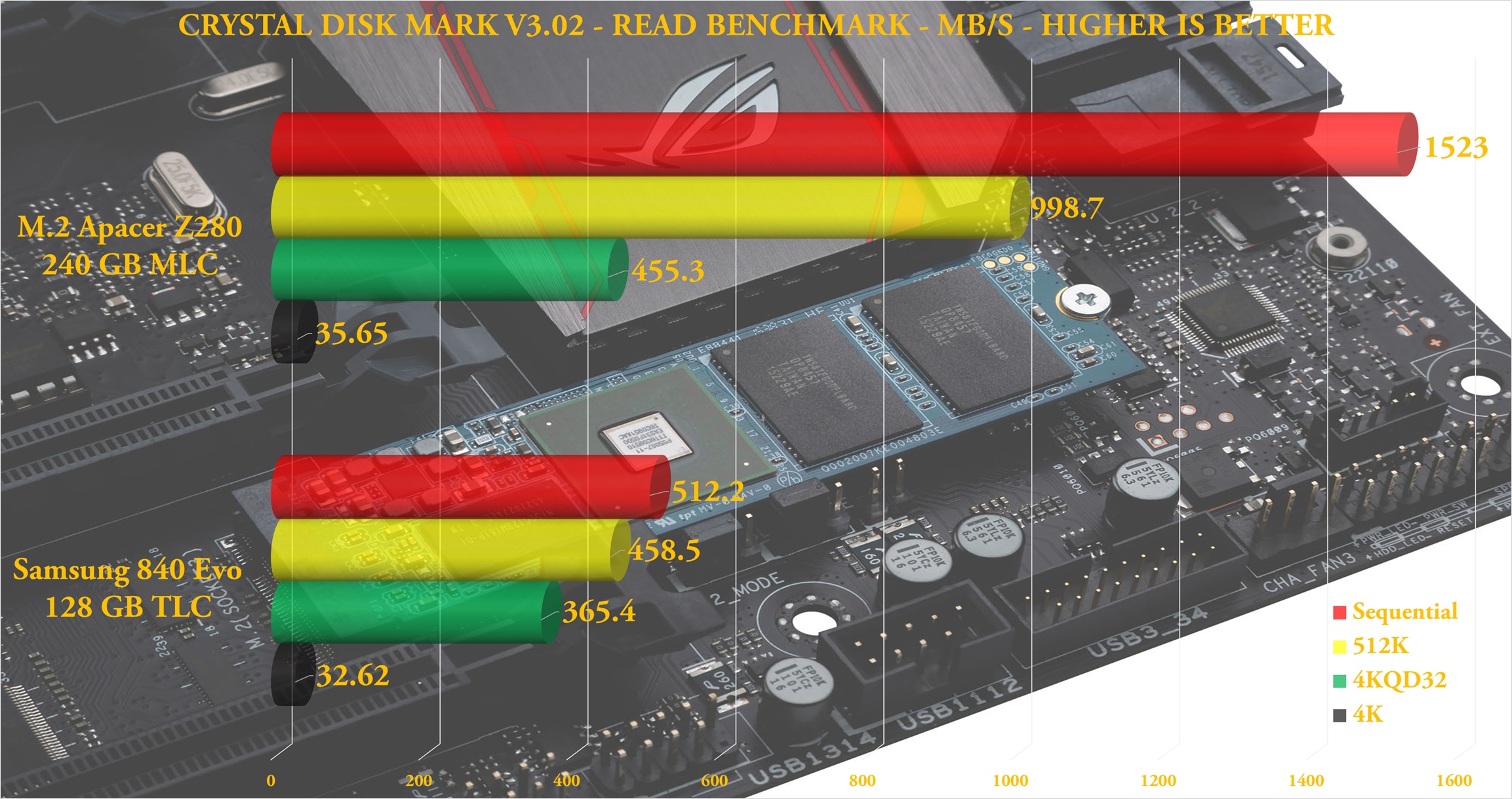 Next up, is the ATTO Benchmark, again this will measure your storage systems performance with various transfer sizes and test lengths for reads and writes.

Samsung Evo SATA SSD on the left and the Apacer M.2 SSD on the right. 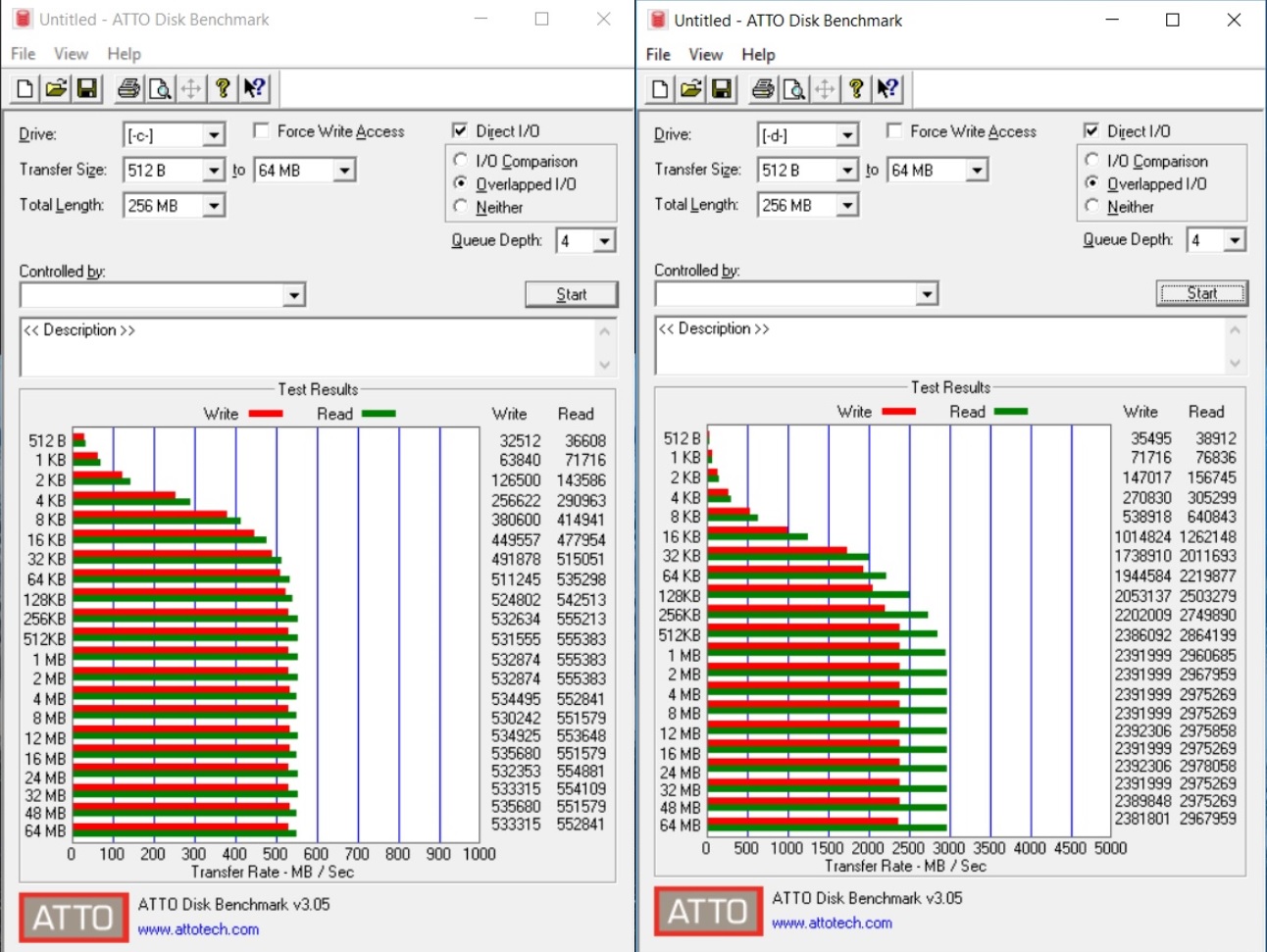 With the Anvil’s Storage application you can test the drive in a variety of benchmarking modes, plus it also has a drive endurance test simulation usage in a shorter period of time to see how the drive copes in the longer term.

The same as above, Samsung Evo SATA SSD on the left and the Apacer M.2 SSD on the right.

Then the AS SSD benchmark will perform tests without using the operating system caches measures the time it takes to read and write a 1 GB file. As above left is the Evo and on the right the Apacer, but to note that there is some discrepancy in the numbers for the M.2. We will further investigate maybe a new update for the program is in order. 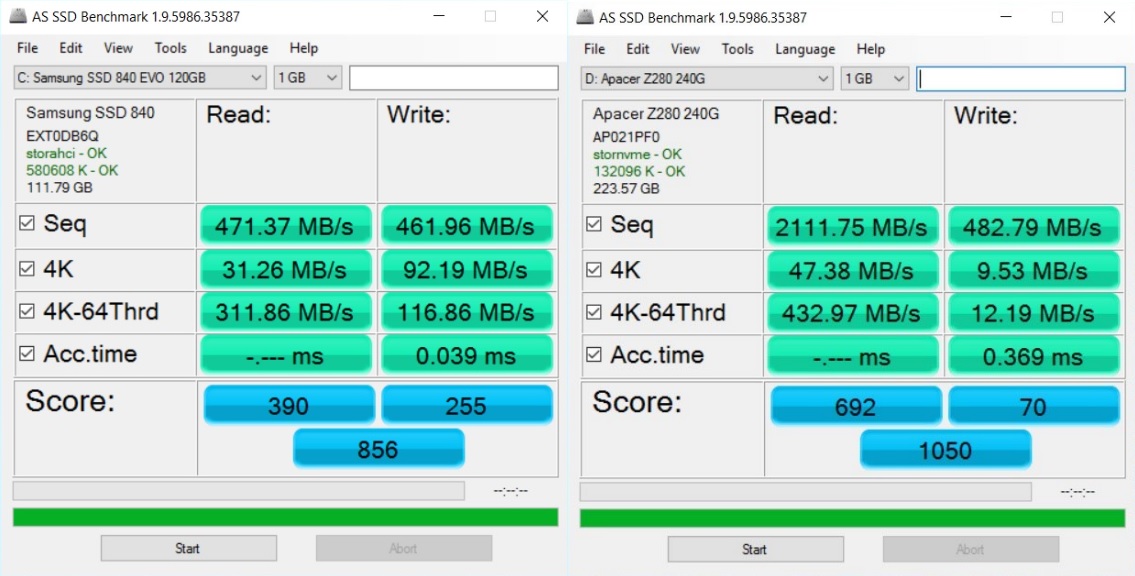 And finally, my preferred test – a data transfer which consists of mix files, mostly kits and .iso formats, of around 13 GB. First up is a copy test from the SATA SSD to the Apacer M.2: 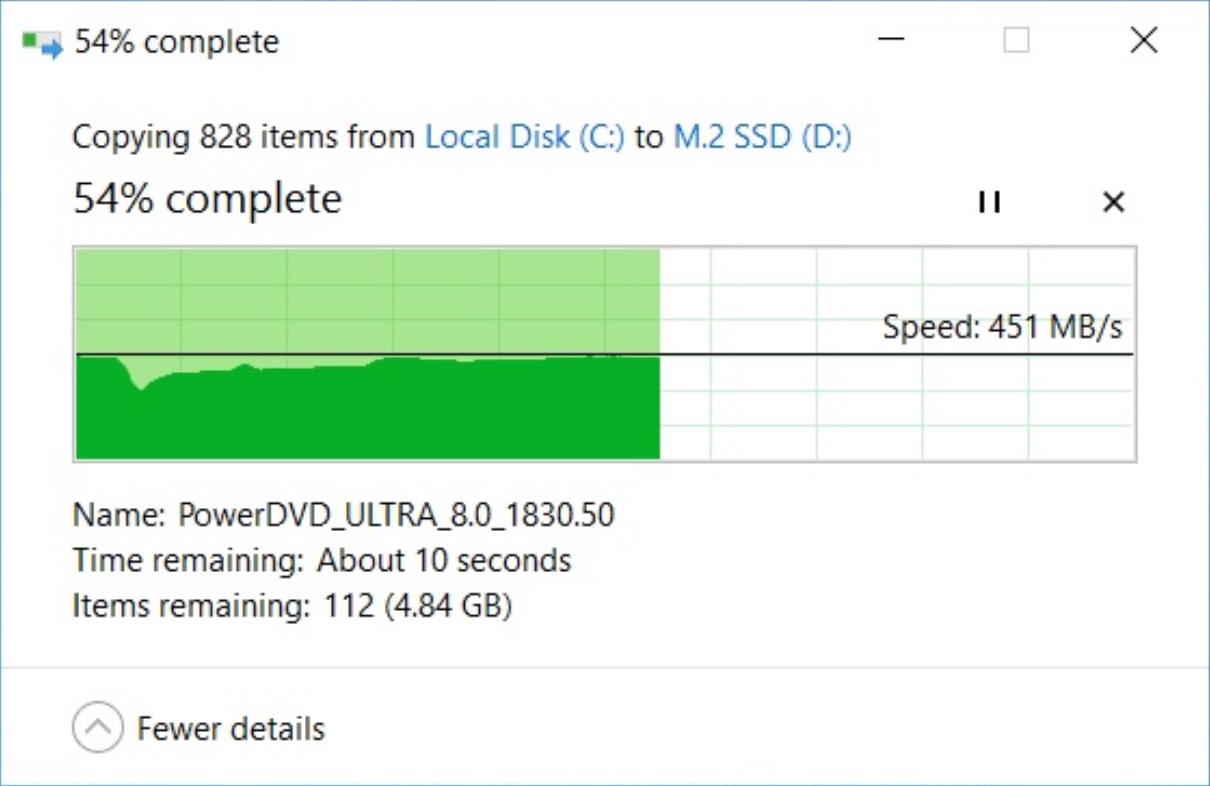 Then the same data, copying it from the M.2 onto itself. 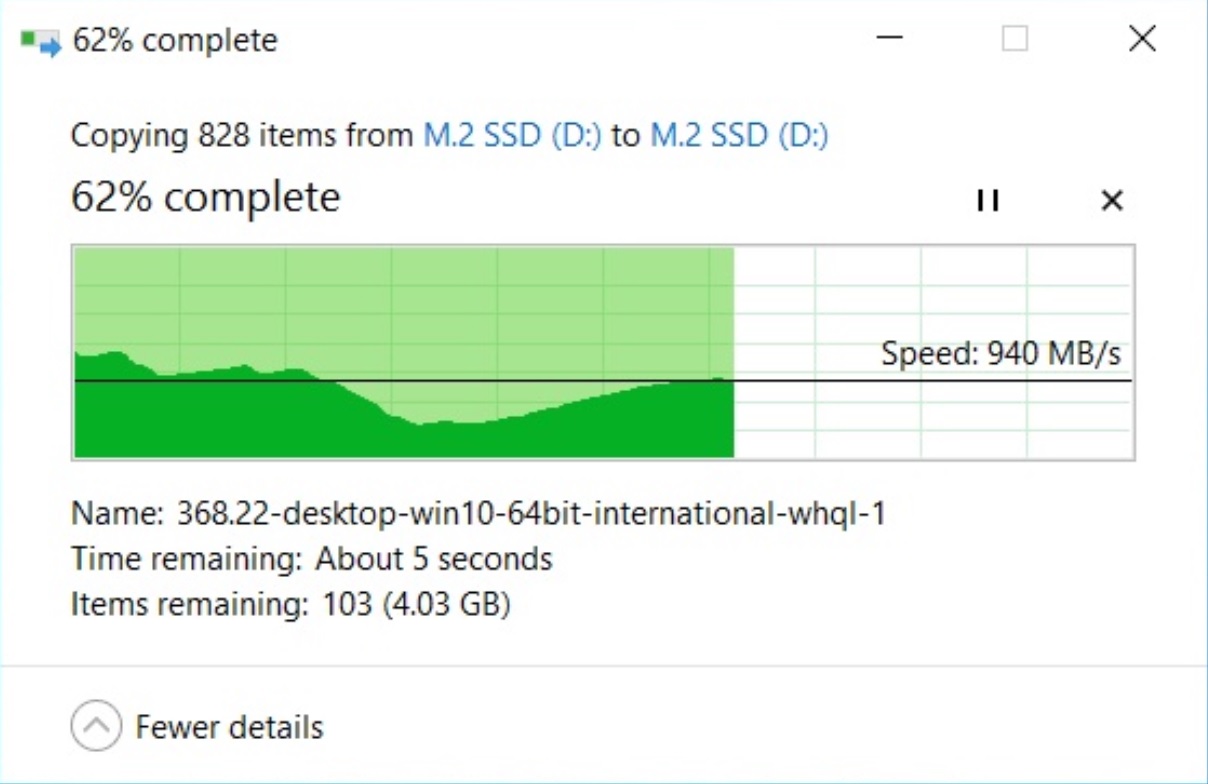 The synthetic testing suit that we employed shows that max theoretical read and write speeds in given circumstances. The numbers here speak for themselves even just side by side.
And for an even better perspective, let’s put them into percentages as well:

Moving to the AS SSD where as previously stated, we had a glitch so until we get to the bottom of it, we cannot interpret the numbers correctly. We will further update this.

And finally the real world mixed data transfer. Here we reached in the first test almost to 500 MB/s writing speed because it’s the read limit from the SATA SSD. And then the local copy onto the M.2 Apacer where it shined and gave us a consistent number of at least 700 MB/s as an average throughout the whole transfer.

The Apacer M.2 Z280 240 GB does exactly what is says on the box – it will reach it’s full read and write potential with no problems at all. We are very impressed overall with the consistency of the results and when compared to a regular SSD, it will have it for breakfast.

I must say the M.2 NVMe form factor is becoming my favorite when it comes to storage solutions. In my opinion so many advantages over all other interfaces in all aspects. Apacer did a great job with their Z280 series M.2 SSDs and even with the lower capacity 240 GB model where you have nothing to worry about on all performance fronts, especially when compared to a regular SATA SSD.

Many thanks to Apacer for supplying us with this test sample !