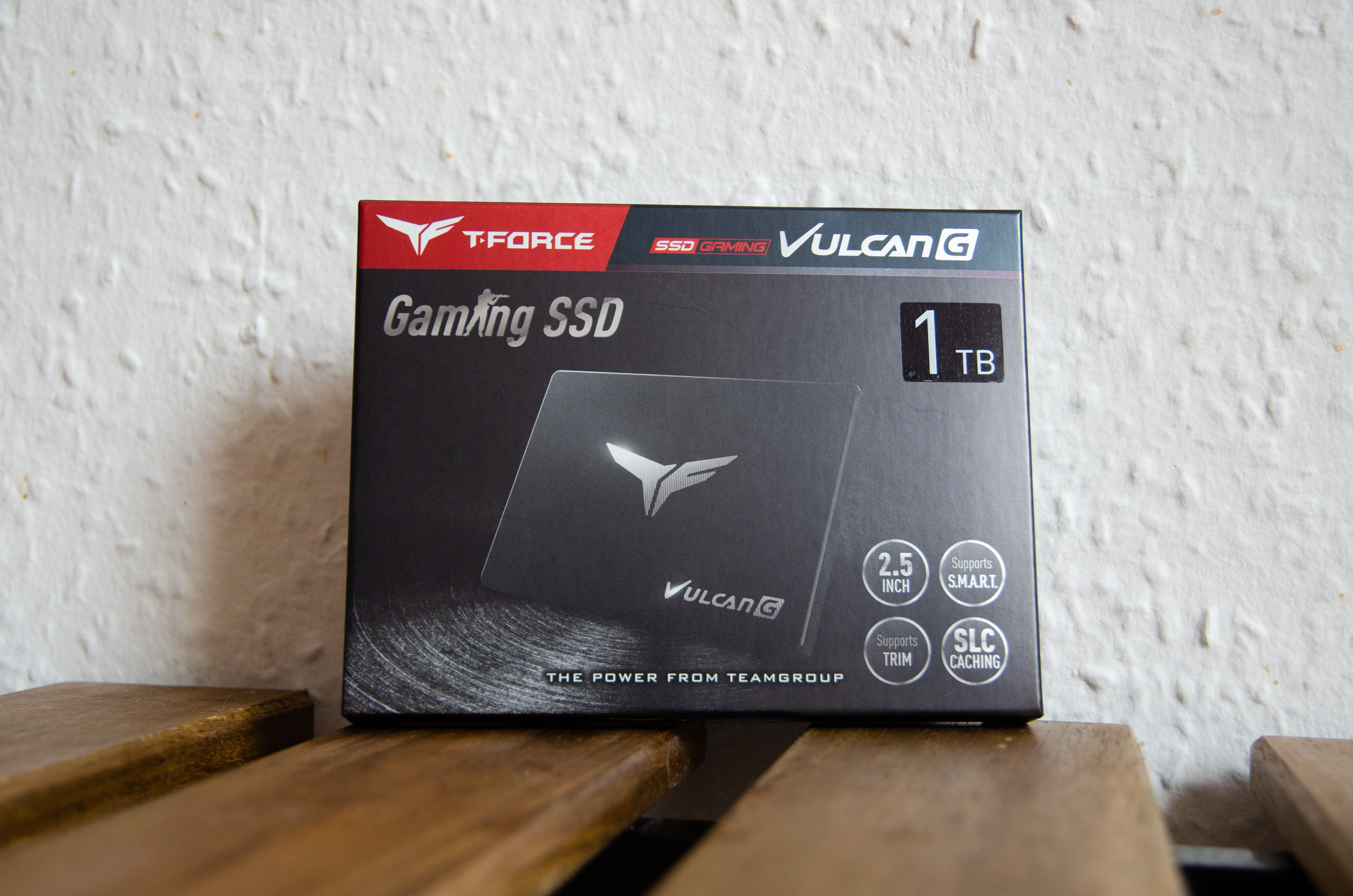 Solid state drives have come a long way since their introduction a few years ago and reaching previously unthinkable price points for SSDs (8¢ per GB). Of course, some compromises had to be made (lack of DRAM for example for the drive in question) but even so, this new T-Force Vulcan G series from Team Group provides an excellent balance of value for money and performance.

The Vulcan G is armed with a Silicon Motion SM2258XTG controller, Toshiba 64-Layer TLC flash memory and it’s backed by a 3 years warranty (or 800TBW endurance rating for the 1TB). All of these should convince you to put them on your shopping list when upgrading from mechanical hard drives or if you’re after more affordable 2.5″ storage.

The Vulcan G series, as of the moment of writing, is available in only two capacity options, 512GB or 1TB. At $50 and $80 respectively, these are really good rates considering they use TLC cells and not QLC as per most budget option drives. Both are backed by a 3 years warranty and have an endurance rating of 400TBW for the 512GB model and 800TBW for the 1TB respectively. 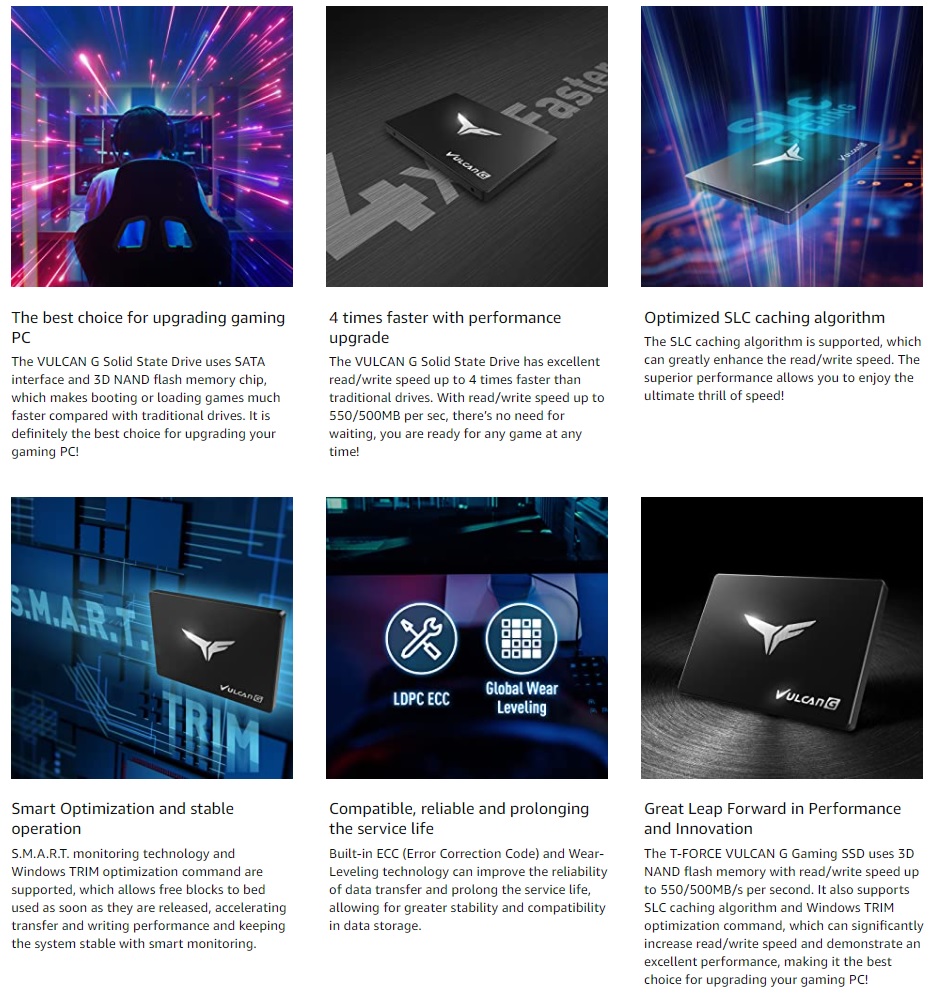 The T-FORCE branding is excellent with the logo being highly visible in the upper part with a red background while the model and capacity of the SSD are right next to it. The Vulcan G drive is depicted in the middle of the packaging along side some of the important specs.

On the back there is a cut-out to see the specs sticker from the SSD. 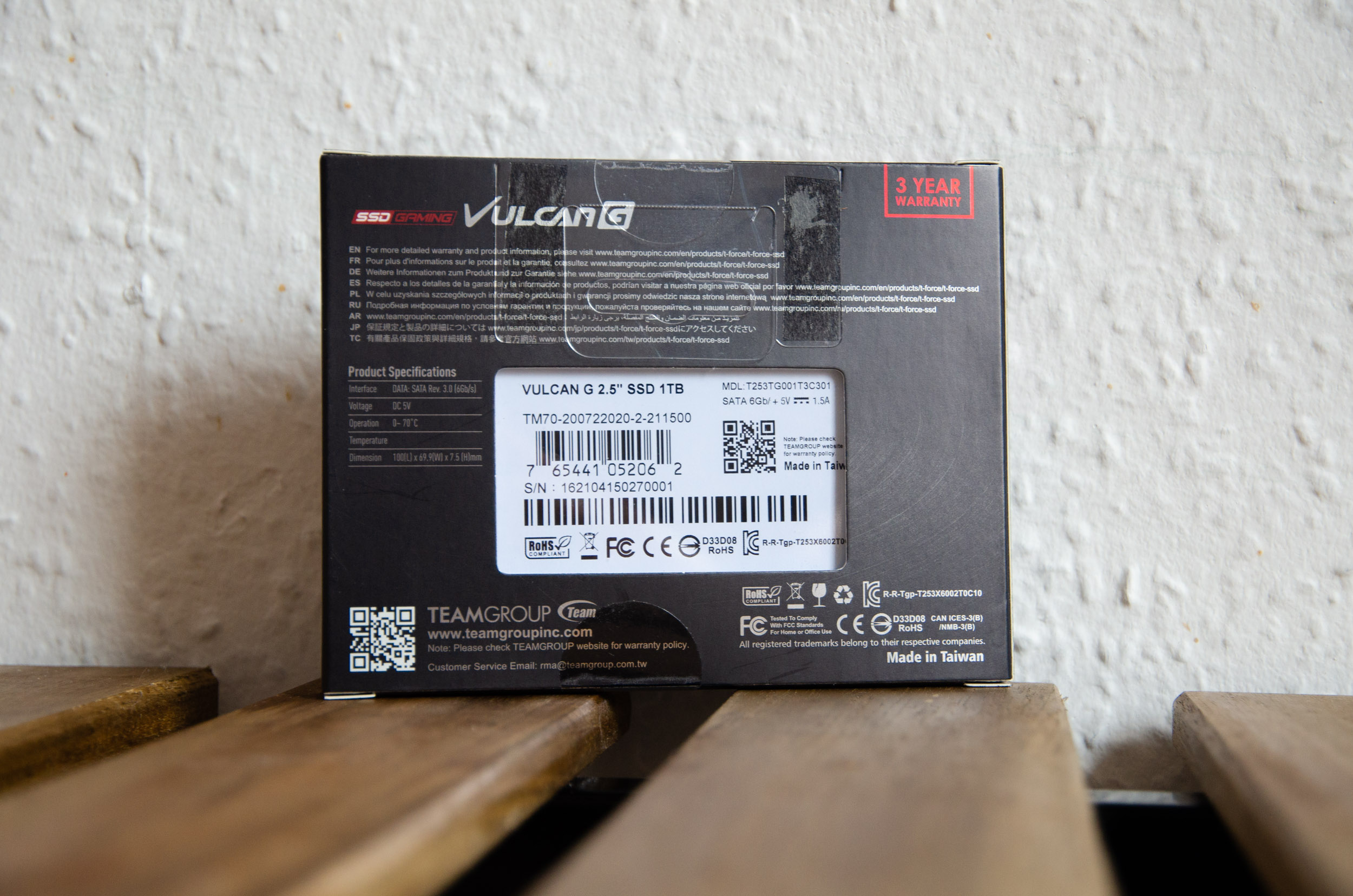 The drive is secured in this transparent plastic tray and no accessories are provided. 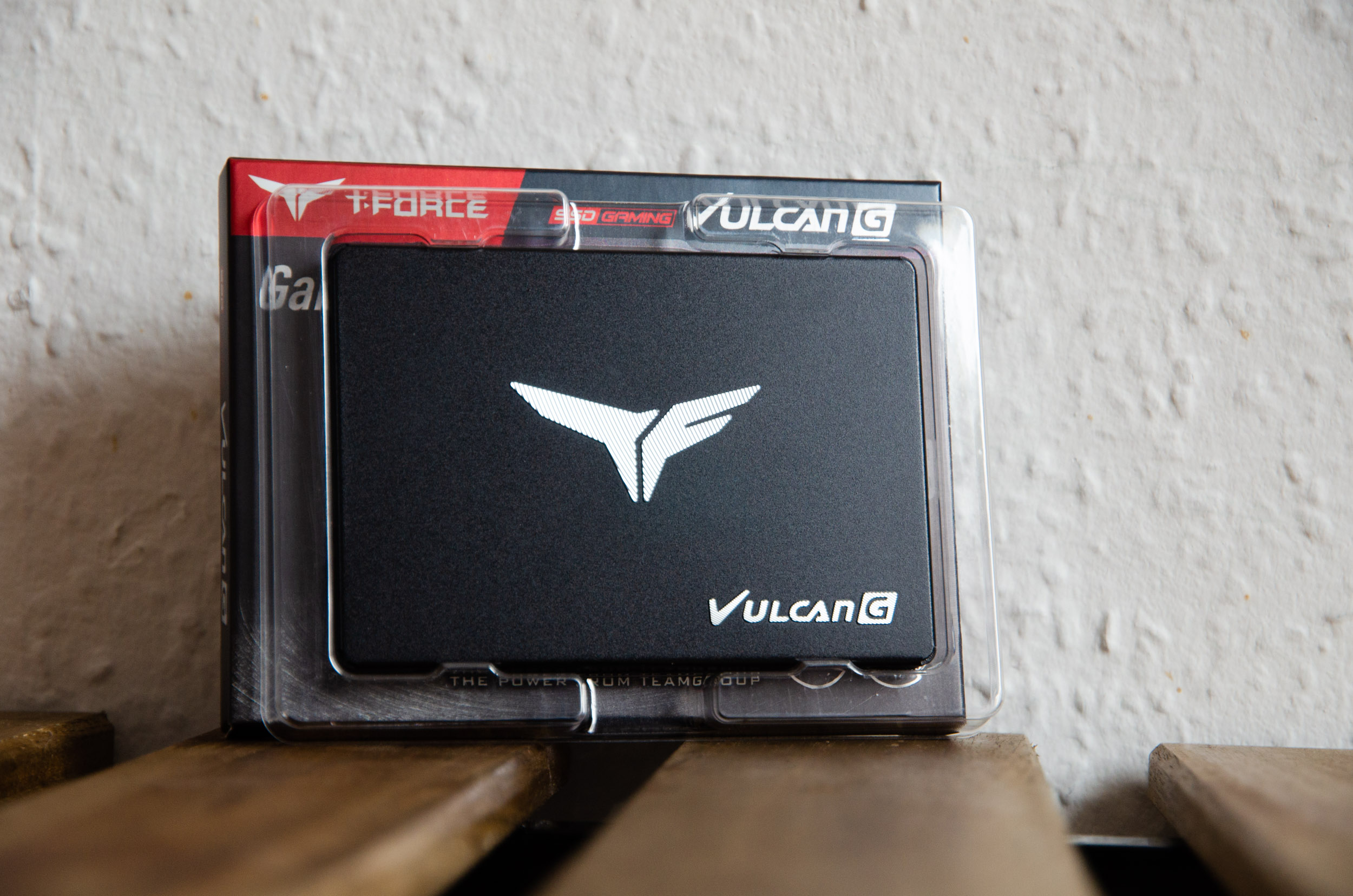 We highly appreciate the presence of a metal shell for the SSD considering this is a budget drive and most companies use plastic. Smack in the middle of the SSD lies the Team Group T-Force logo and the model designation (Vulcan G) is in the lower right corner. 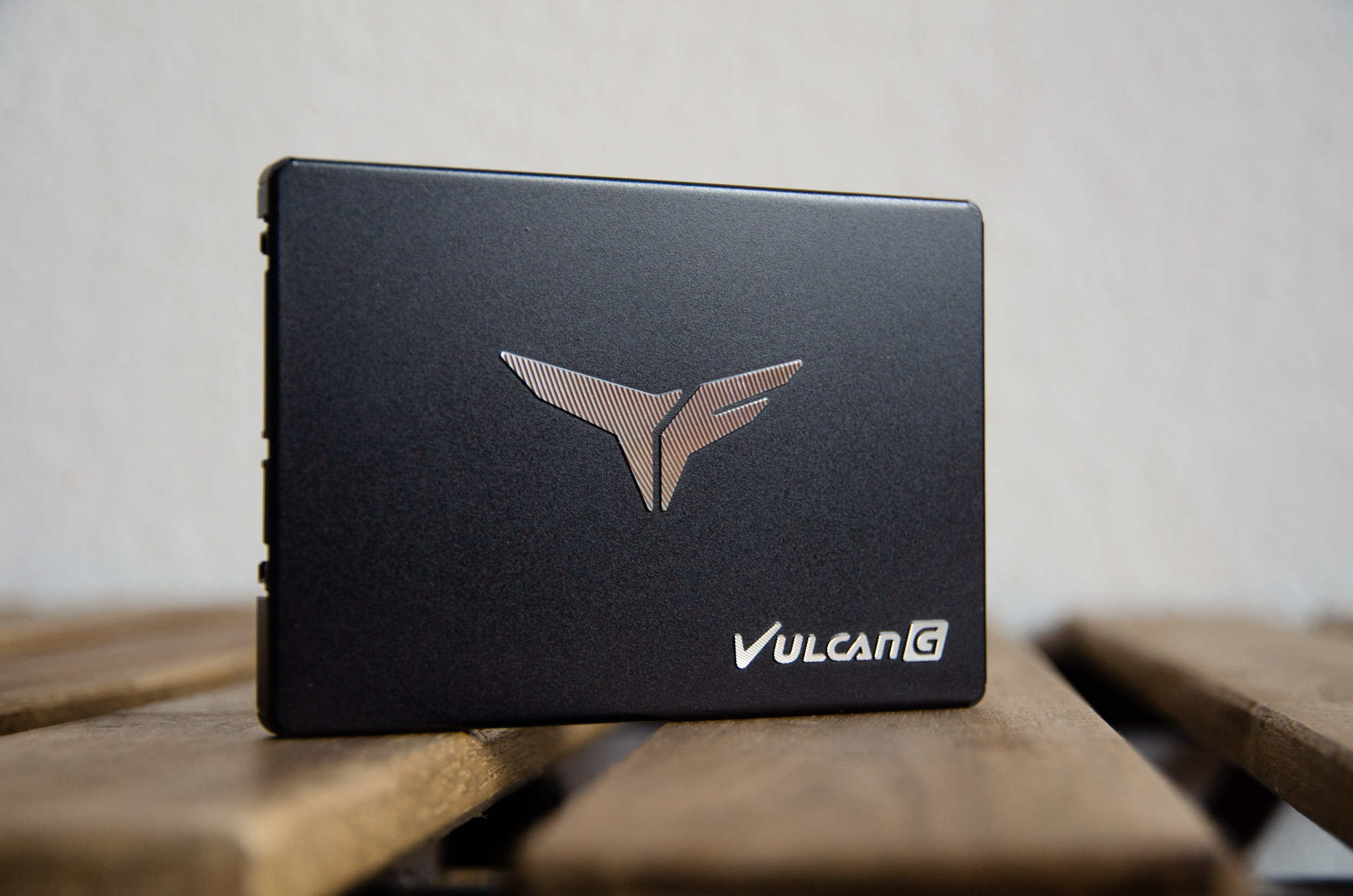 The logo sticks out and it has this nice parallel lines pattern finish to it. 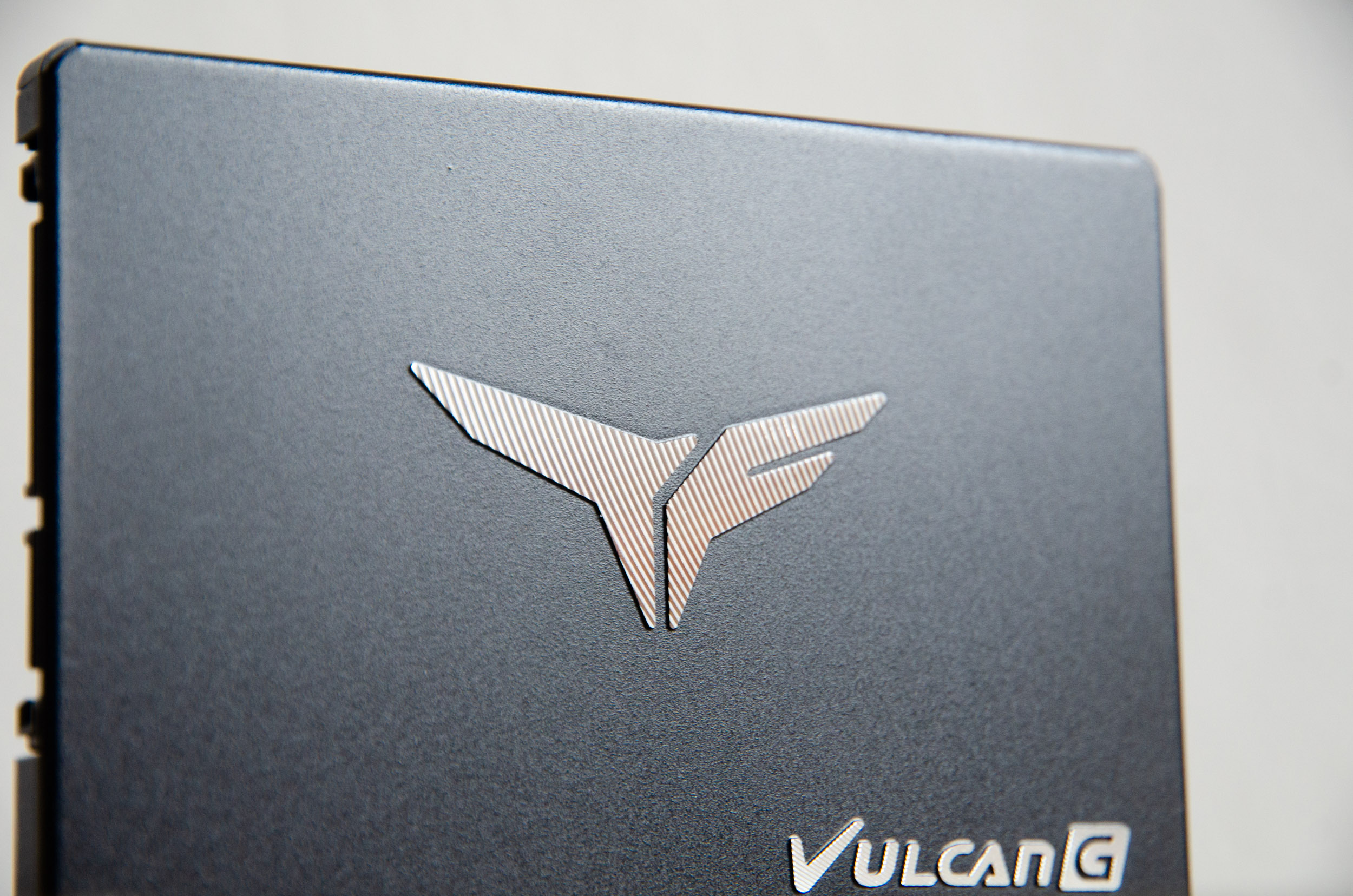 On the back we have the specs sticker which contains all of the important information. The SATA 6Gbps interface is also confirmed. 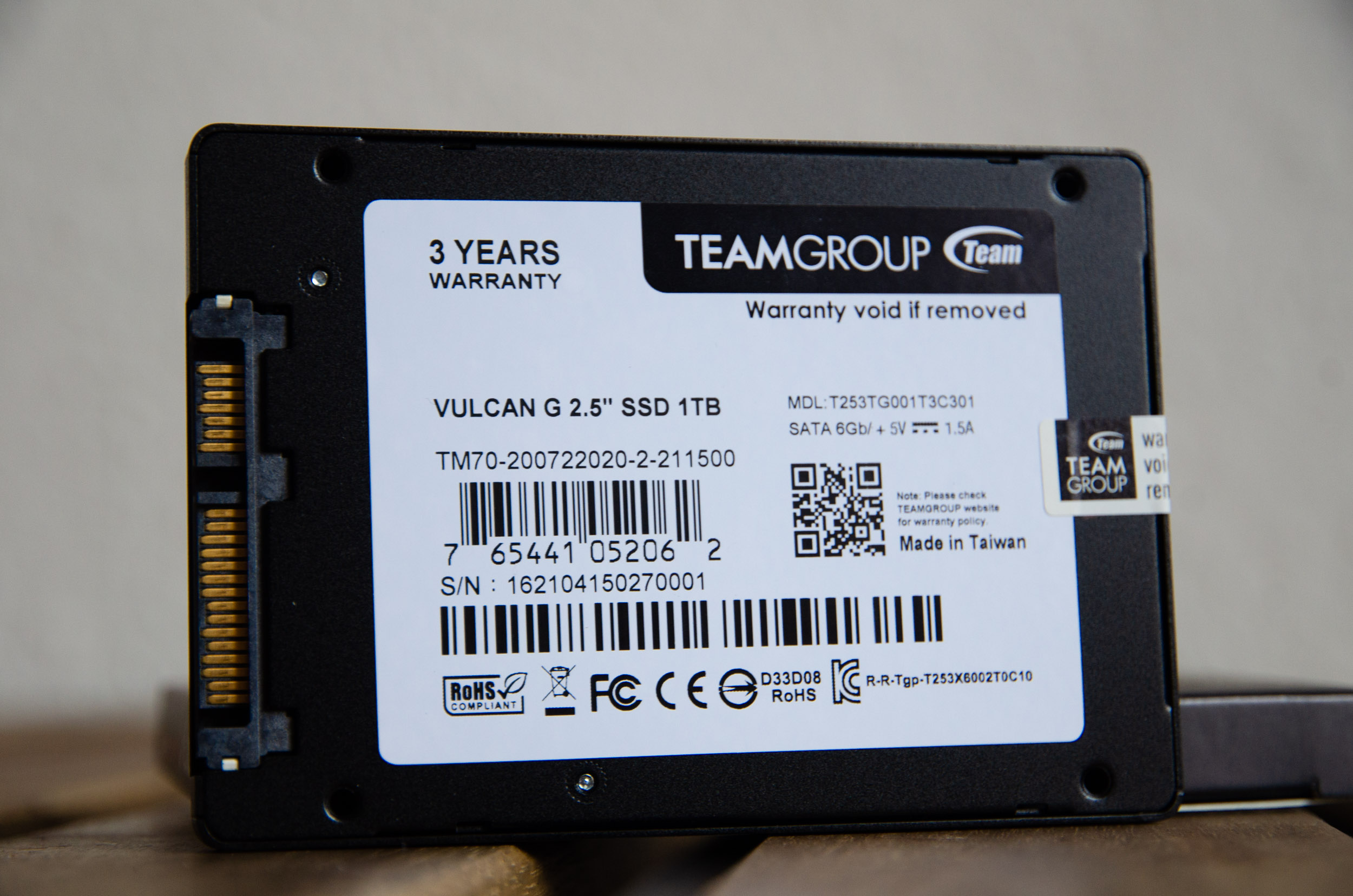 Under the hood we have the Silicon Motion SM2258, which is a four-channel flash controller (the XT variant denotes support for DRAM-less SSDs) and the four flash chips are 64-layer 3D TLC NAND, made by Toshiba (part number is TH58TFT1V23BA8H) and each chip has a capacity of 256 GB. 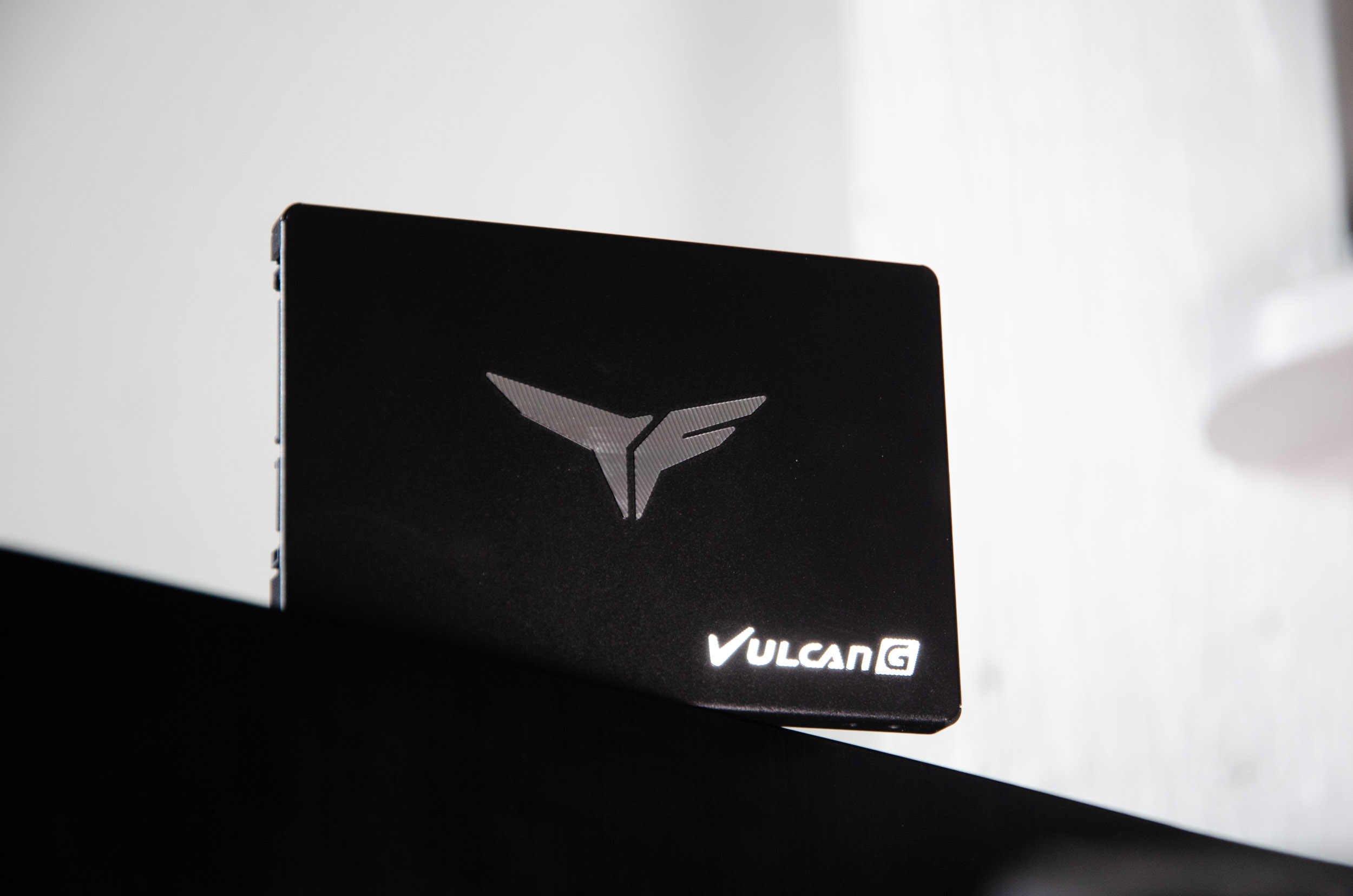 Here it is how it will look installed on a full ATX case. 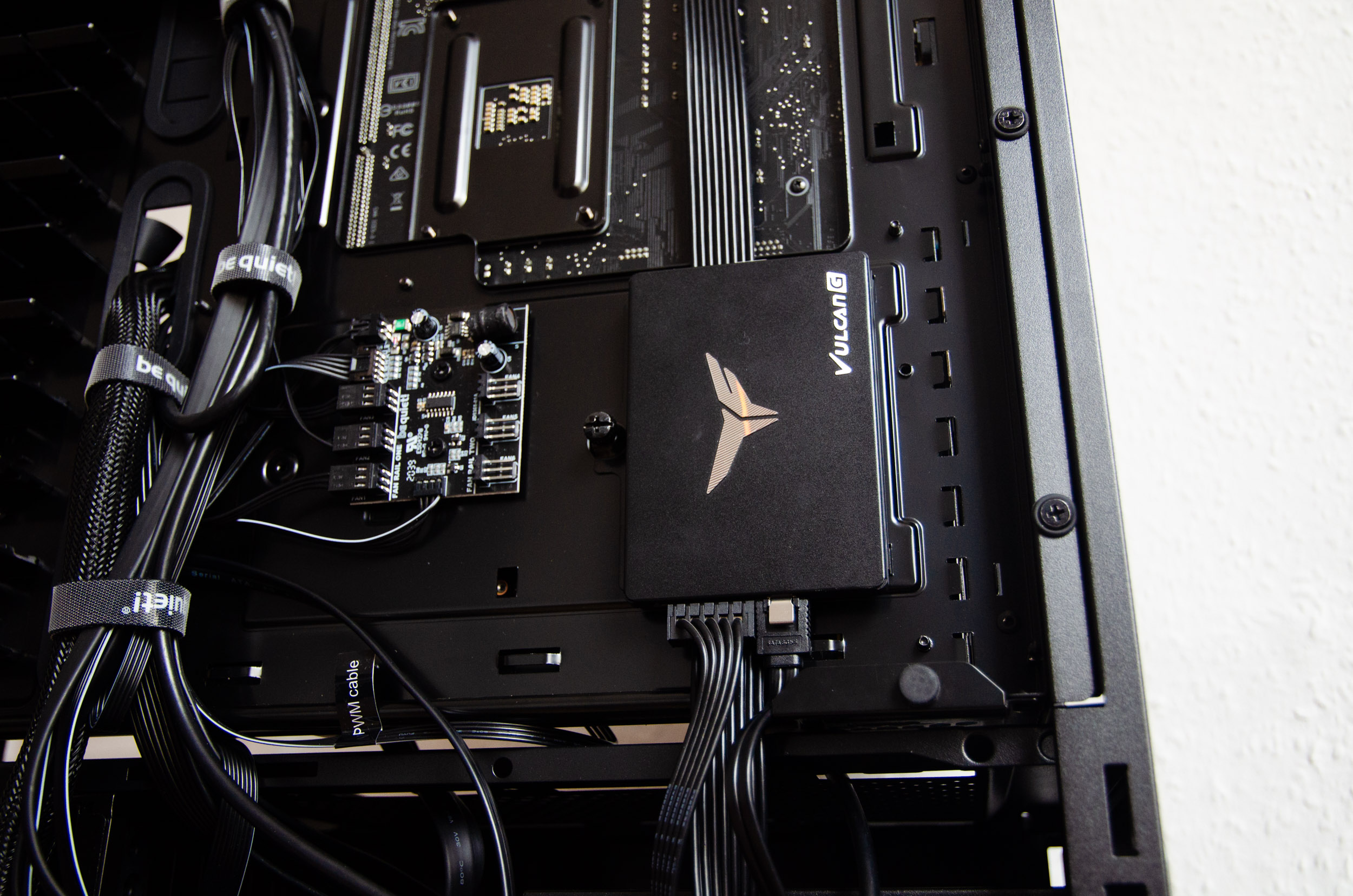 * Synthetic and real life big file transfer tests – a game folder of 20GB of mixed files and a single 4GB .iso file to test the burst speed and the SLC cache if present.
* All SSDs were secure-erased before our tests started
* Between tests, drives are left idle for 1 minute to allow them to flush and reorganise their internal data.
* Steps have been taken to ensure that the CPU’s power-saving features don’t interfere with any of our results. All of the CPU’s low-power states have been disabled.
* In order to minimise random variation, each of the real-life performance tests are run a few times with reboots in-between tests to reduce the impact of disk cache.
* (SATA SSDs only) Make sure you use a SATA 6Gbps capable motherboard and a matching cable to avoid bottle-necking. Then double check in the BIOS that you have the AHCI mode activated for another maximum performance tip.
* For the Gen4 x4 M.2s, you have to make sure you have a compatible motherboard that accepts and delivers the new bandwidth. Otherwise, it will work only in Gen3 x4 mode. 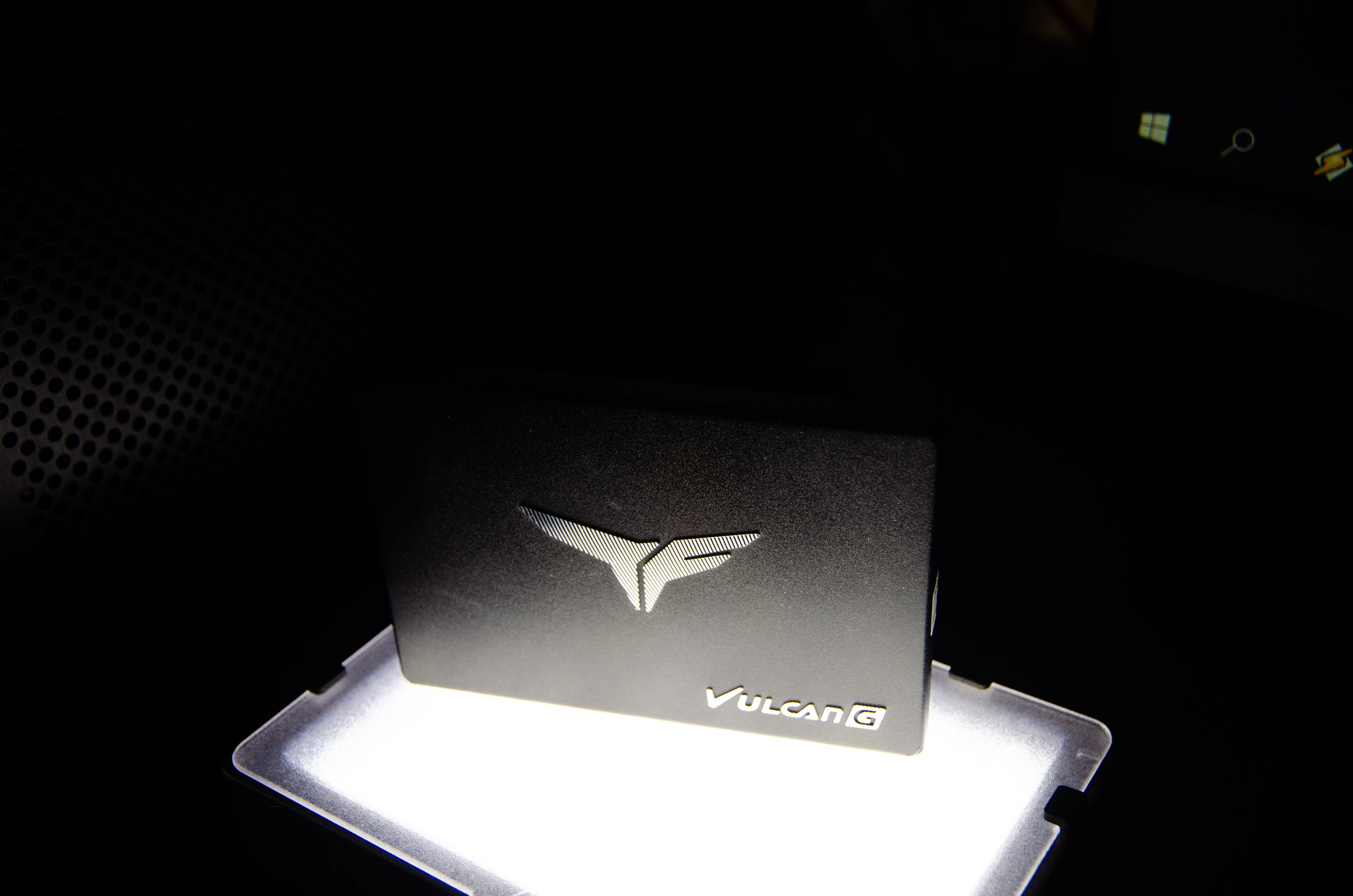 Let’s start with HD Tune Pro – which is a hard disk / SSD utility with many functions. It can be used to measure the drive’s performance, scan for errors, check the health status (S.M.A.R.T.), securely erase all data and much more. The Vulcan G positions itself just shy of the Samsung 860 1TB QVO. 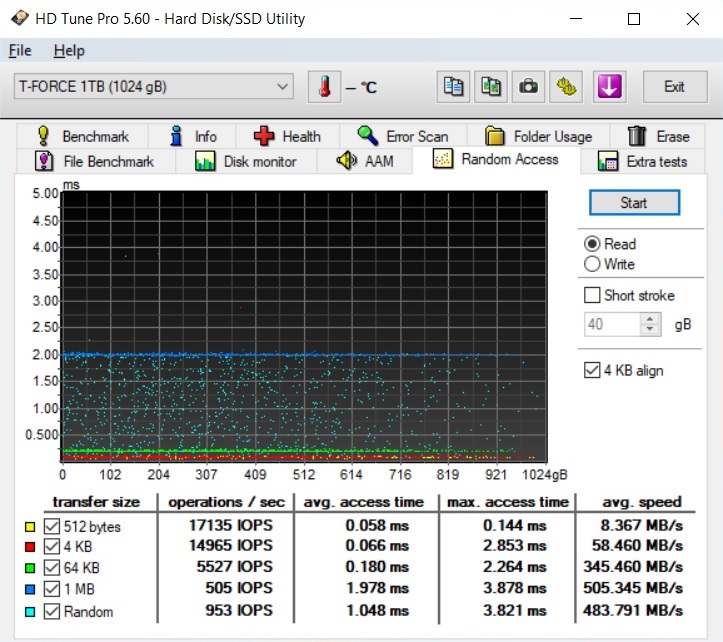 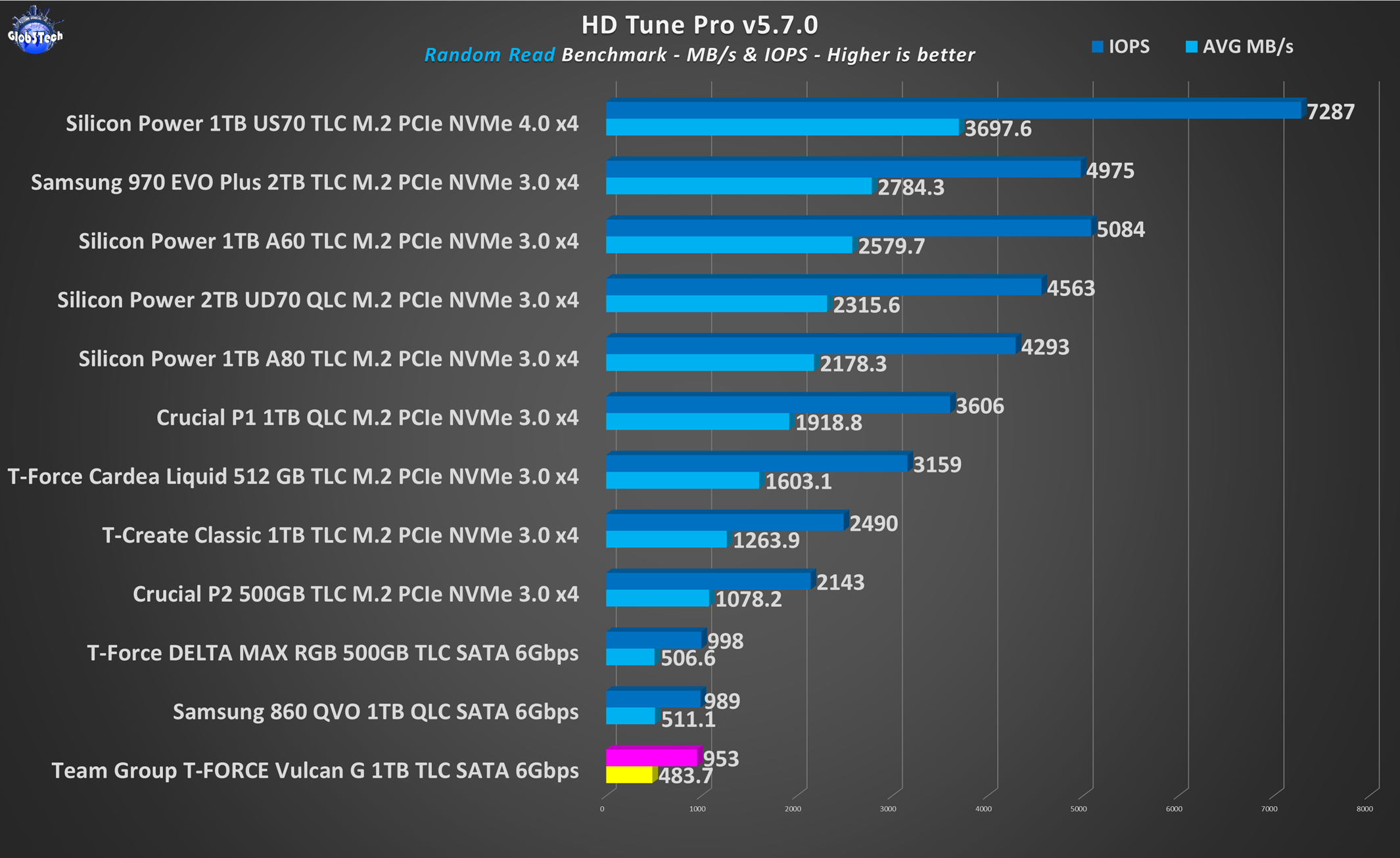 Moving to the next utility – Crystal Disk Mark – this one is designed to quickly test the performance of your drives. 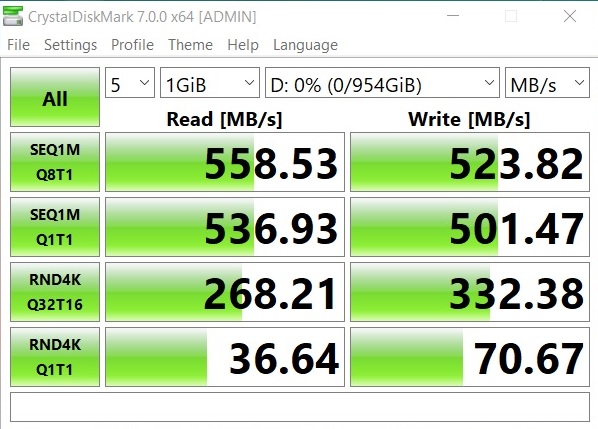 In the “read” benchmark we get a reshuffling of the ranks since our previous test and the Vulcan G manages to beat the Samsung QVO in 3 out of the 4 read tests. 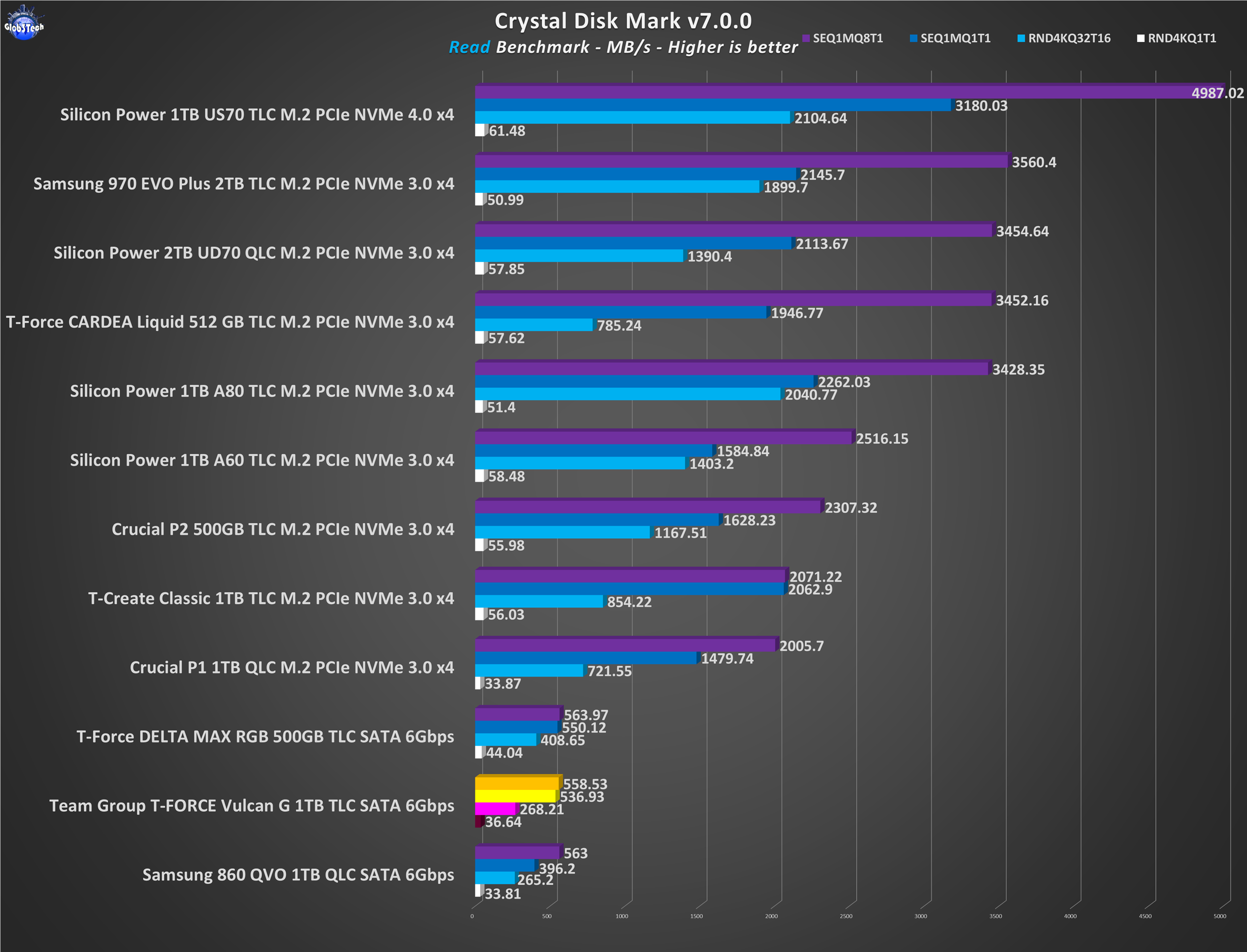 Moving to the “write” test, which is even more important in real life scenarios and here the Vulcan G beats the SAmsung QVO in 2 out of the 4 write tests. 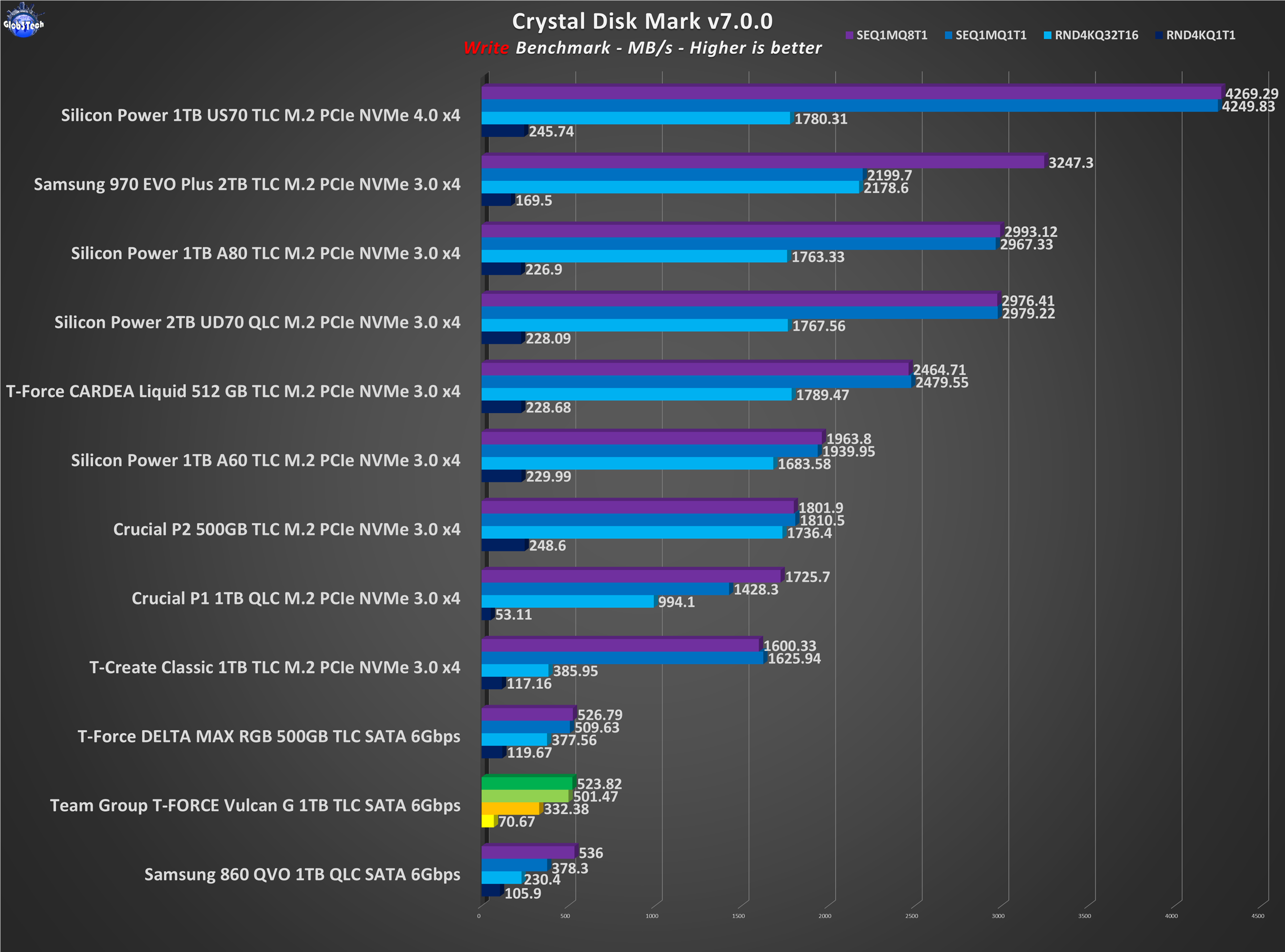 To conclude the synthetic tests, here is ATTO which is another performance measurement tool to test any manufacturers RAID controllers, storage controllers, host bus adaptors (HBAs), hard drives and SSD drives. In this test the Vulcan G manages to surpas not only the Samsung QVO drive but even the T-Force DELTA MAX RGB one. 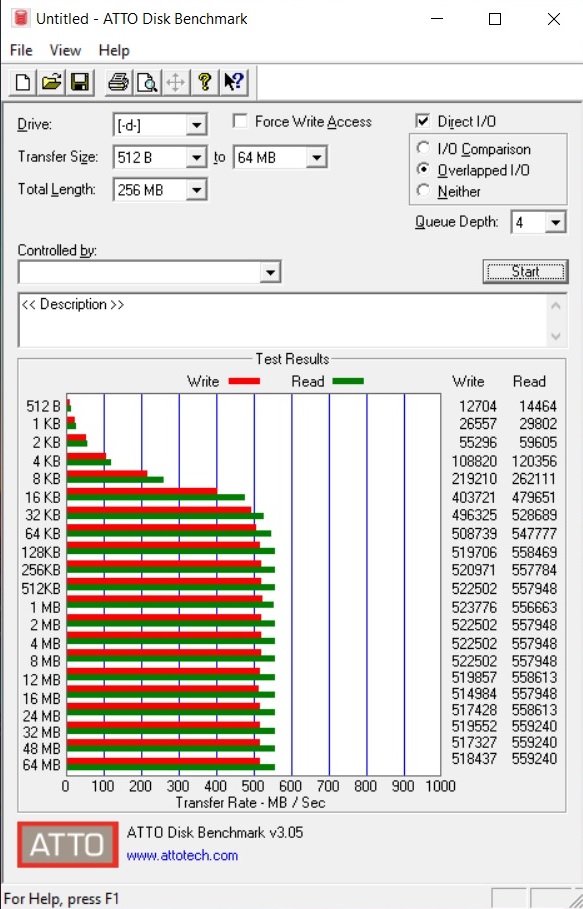 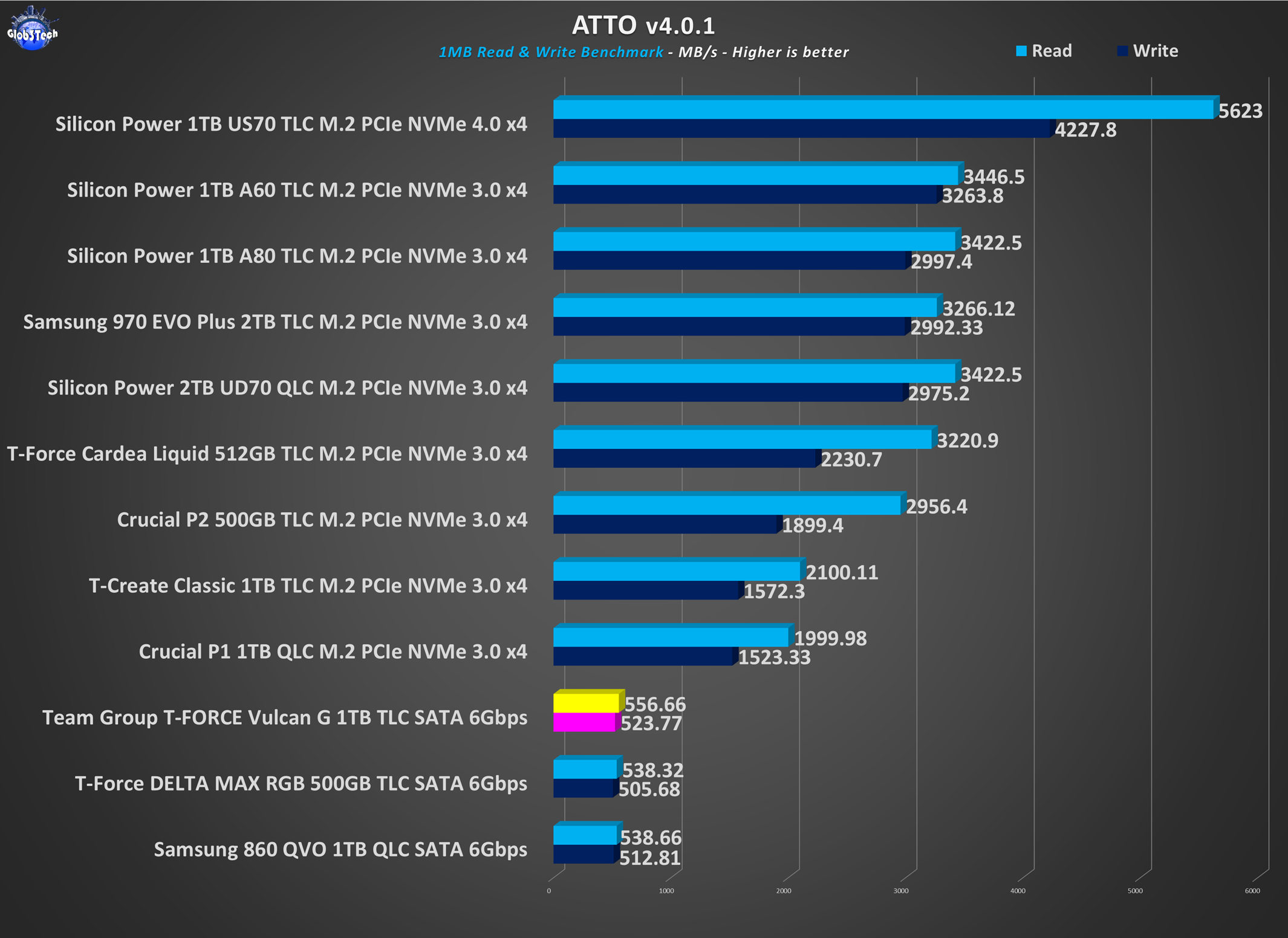 The final practical test revolves around some real life copy tests. Firstly, we will copy to the SSD a single 4GB .iso file to test the burst speed followed by a copy of the same file, from the SSD onto itself. Then the same process is repeated but with a big mixed files 20 GB installation folder for The Rise Of The Tomb Raider game title.

To point out that the Vulcan G 1TB SSD has an SLC cache of ~ 350GB (!) which will give it a relaxed headroom to maintain large file transfers at a reasonable speed. If this by any chance is filled, the performance will go down drastically, we are talking about regular HDD numbers. Alas, in both scenarios the T-Force Vulcan G delivers good sustained numbers, nothing spectacular given its DRAM-less nature.

The name of the game here is budget friendly and the T-Force Vulcan G with its excellent MSRP has achieved just that. This is an excellent first choice for any new builder without breaking the bank or for anybody looking to have some extra storage that will also perform reasonably well. We would suspect that a 2TB model would excel even better in the sustained speeds area if it will keep the same SLC cache ratio and of course, the same value for money. The DRAM-less format is visible in large transfers and some burst tests but the fact that you get TLC cells and a metal enclosure, should tip the balance favourably to the Vulcan G.

– The lack of DRAM when combined with the exhaustion of the SLC will dramatically lower the sustained writing speeds (nothing new for this type of specs though)
– Needs a 2TB option, and even a 4TB one

A lot of thanks to Team Group for supplying us with this item !