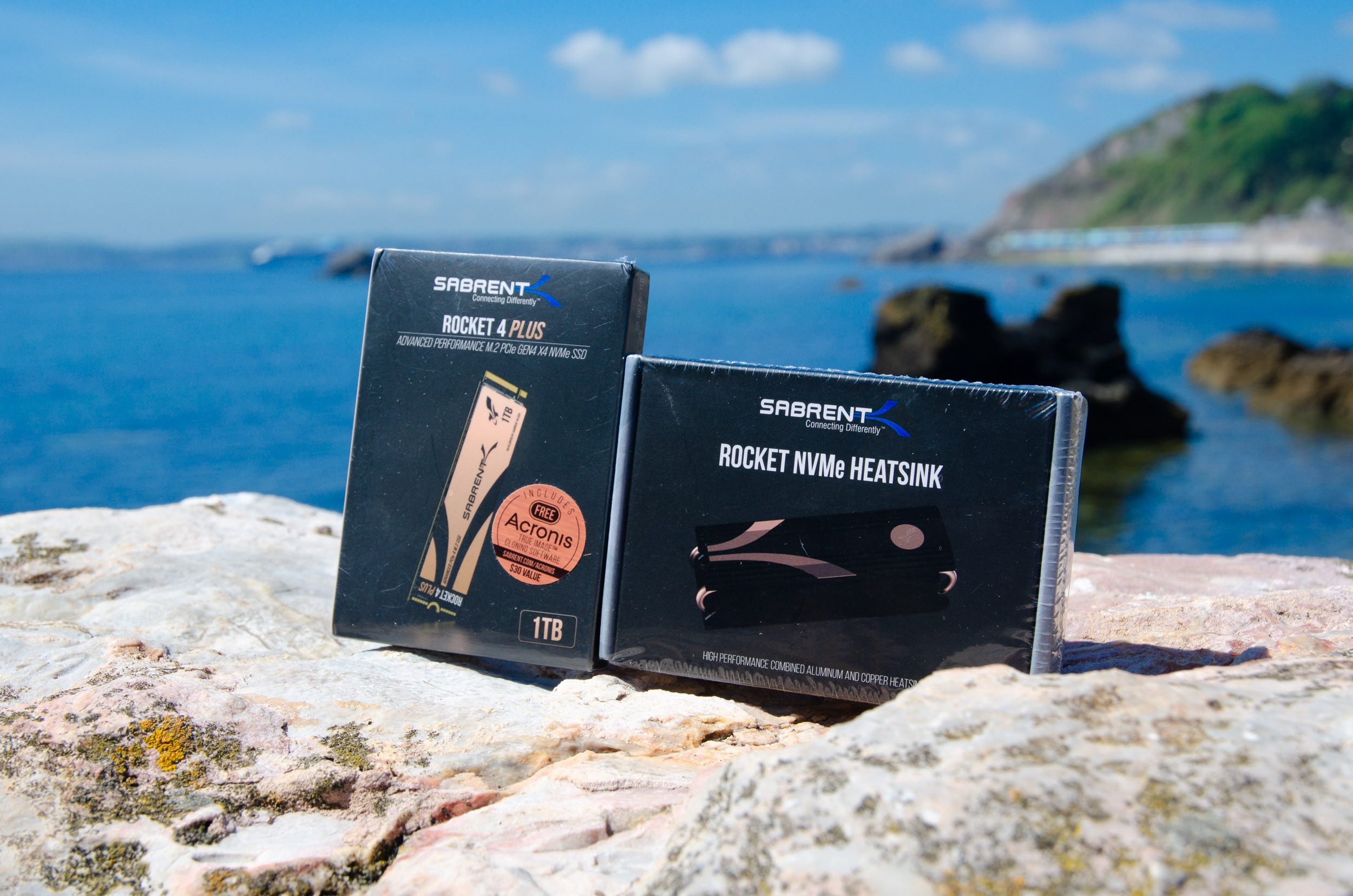 Well, this was bound to happen. Since their initial development, solid state drives have been making exponential leaps in the overall speed that they can offer. Thus here we are with the Gen4 x4 M.2 NVMe drives that basically double the potential bandwidth since the previous Gen3 x4.

Today we are looking at Sabrent’s Rocket 4 Plus 1TB model that truly deserves its name; because it’s just that – a rocket! It will do 7000 MB/s (read) and up to 5300 MB/s (write) for this 1TB variant and even higher for the 2TB and the upcoming 4TB one!

All of this is possible thanks to the amazing second gen 12nm 5-core Phison E18 controller, which is built on the success of the E16, the world’s first PCIe Gen4 controller. Thus, it’s easy to guess that today, this drive will top all the charts that it will enter.

They even offer their own heatsink upgrade kit which it’s worth to get if you will not have direct airflow for the drive. As you know, anything that’s high performing will also generate extra heat.

Considering its potential, it priced reasonably well at $199 for the 1TB variant. Some competition comes from WD which has identical stats but it’s about $10 more expensive while the Samsung 980 Pro doesn’t even use TLC cells. But Sabrent kindly includes with the M.2 a nice bonus in the form of a free copy of Acronis’ True Image Cloning Software worth of $30.

The SB-HTSK heatsink is a no brainer since it can be used with any single and double sided M.2 2280 SSDs.

*17.06.21 Update – Sabrent just released a new 1.2 firmware update that addresses several caching and performance issues with initial batches of the drive that shipped with the version 1.1 firmware. The latest batches should come with version 1.2 firmware pre-installed. You can get it here. 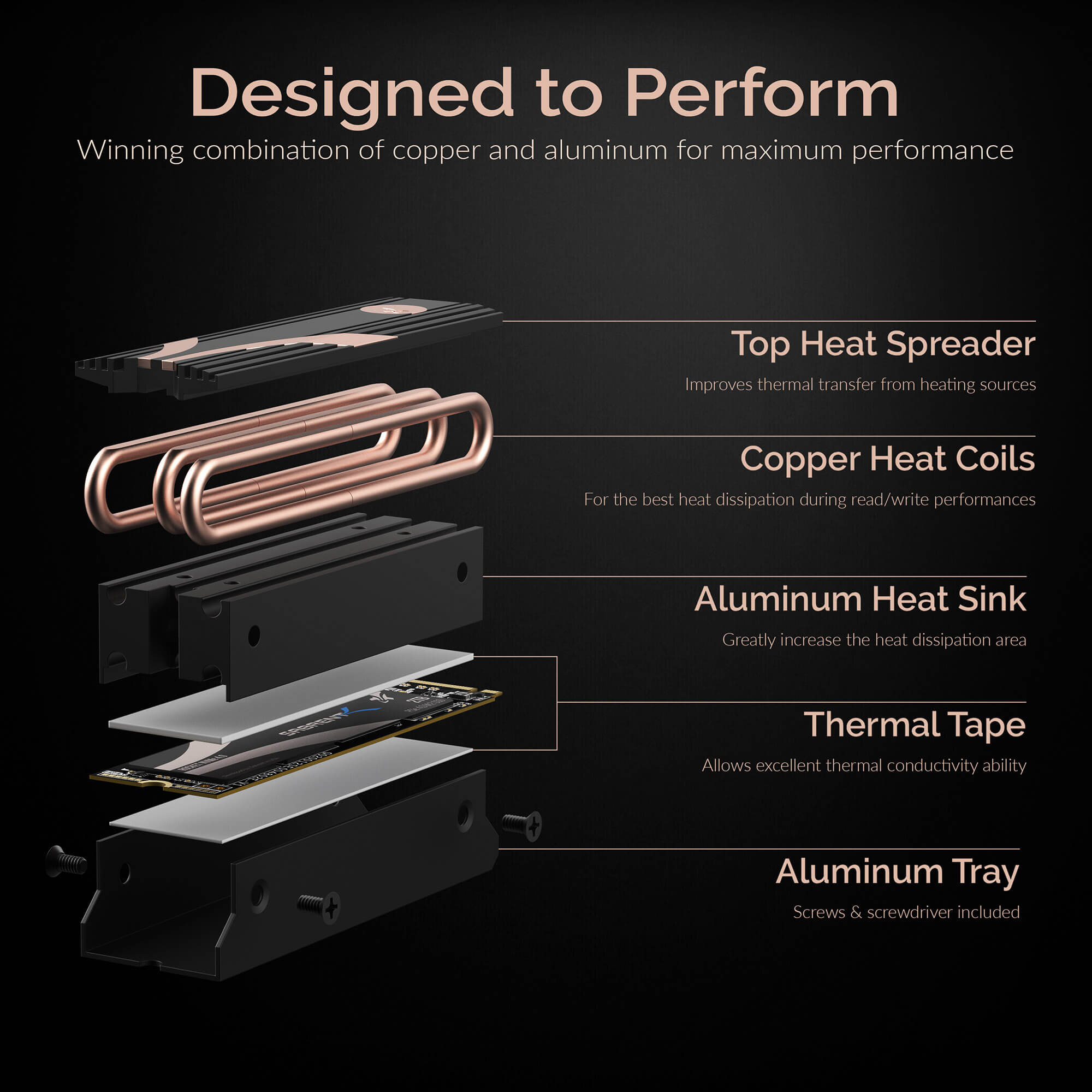 NVMe PCIe extreme speeds generate excessive heat. To help dissipate the heat, Sabrent has developed a state of the art heatsink using the combination of Aluminium and copper metals. The copper is used to absorb the heat from the drive spreading it up to the grooved Aluminium surface of the heatsink. This gives the heat more surface for efficient cooling, which in turn avoids thermal throttling and Maximises the performance of your drive.

Both products come in a surprisingly petit and minimalist packaging which is no larger than a deck of playing cards. This also implies that on both the front and the back don’t expect too much detail just the bare essential info. A highly welcomed bonus is that you get a free copy of Acronis’ True Image Cloning Software worth of $30 with the M.2. 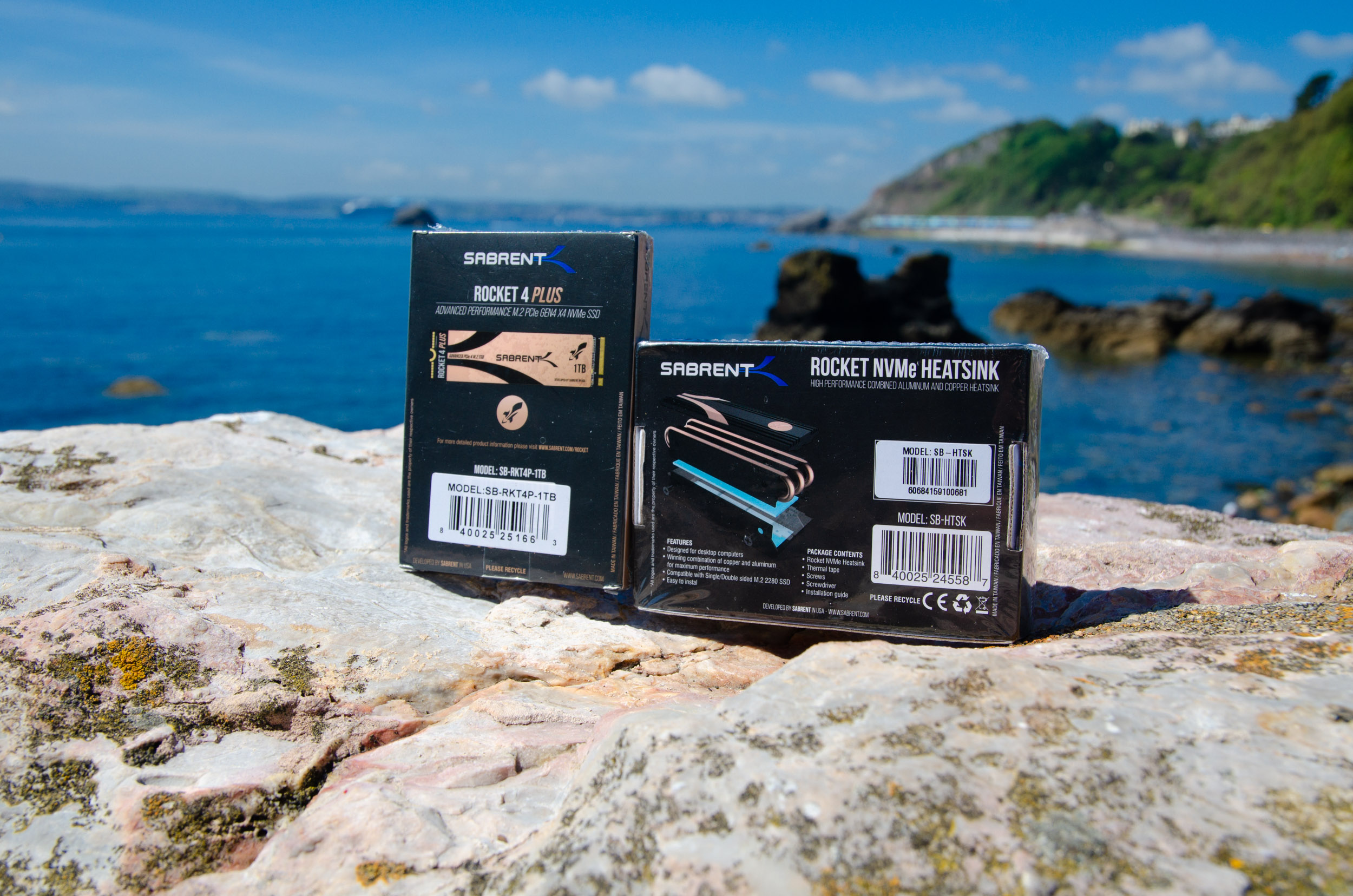 The Rocket 4 Plus 1TB M.2 NVMe drive has its own metal case inside the main packaging and thus it’s very well protected. The only accessory included is a quick user’s guide. 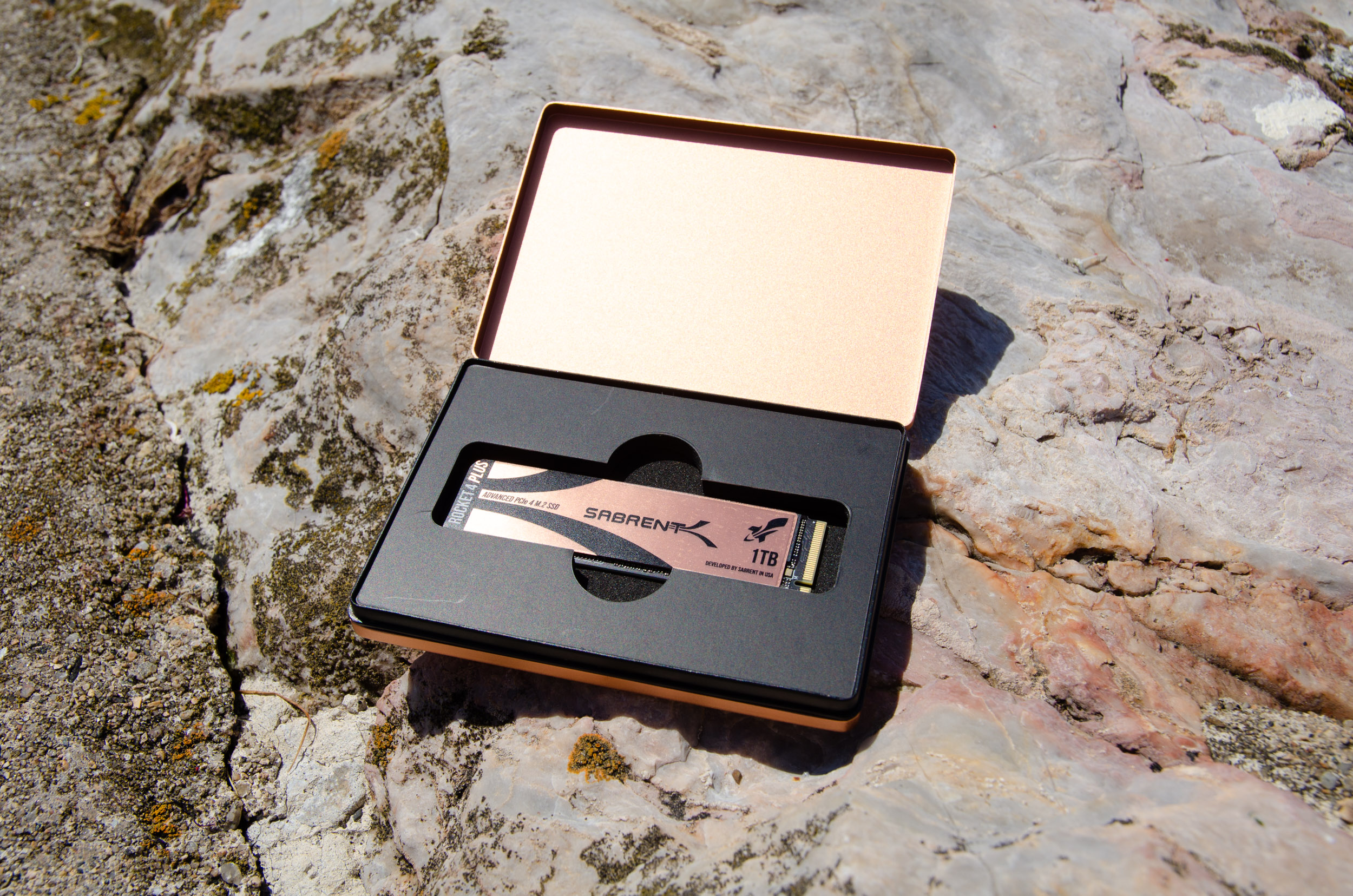 Here it is, the star of the show – the single sided Sabrent Rocket 4 Plus Gen4 x4 NVMe 1.4 M.2 2280 SSD that comes with a nice a copper heat spreader label. Underneath it we have four packages of Micron B27B 96-layer 3D TLC NAND which sit alongside the Phison PS5018-E18 controller and a single SK Hynix DDR4 1GB DRAM IC. 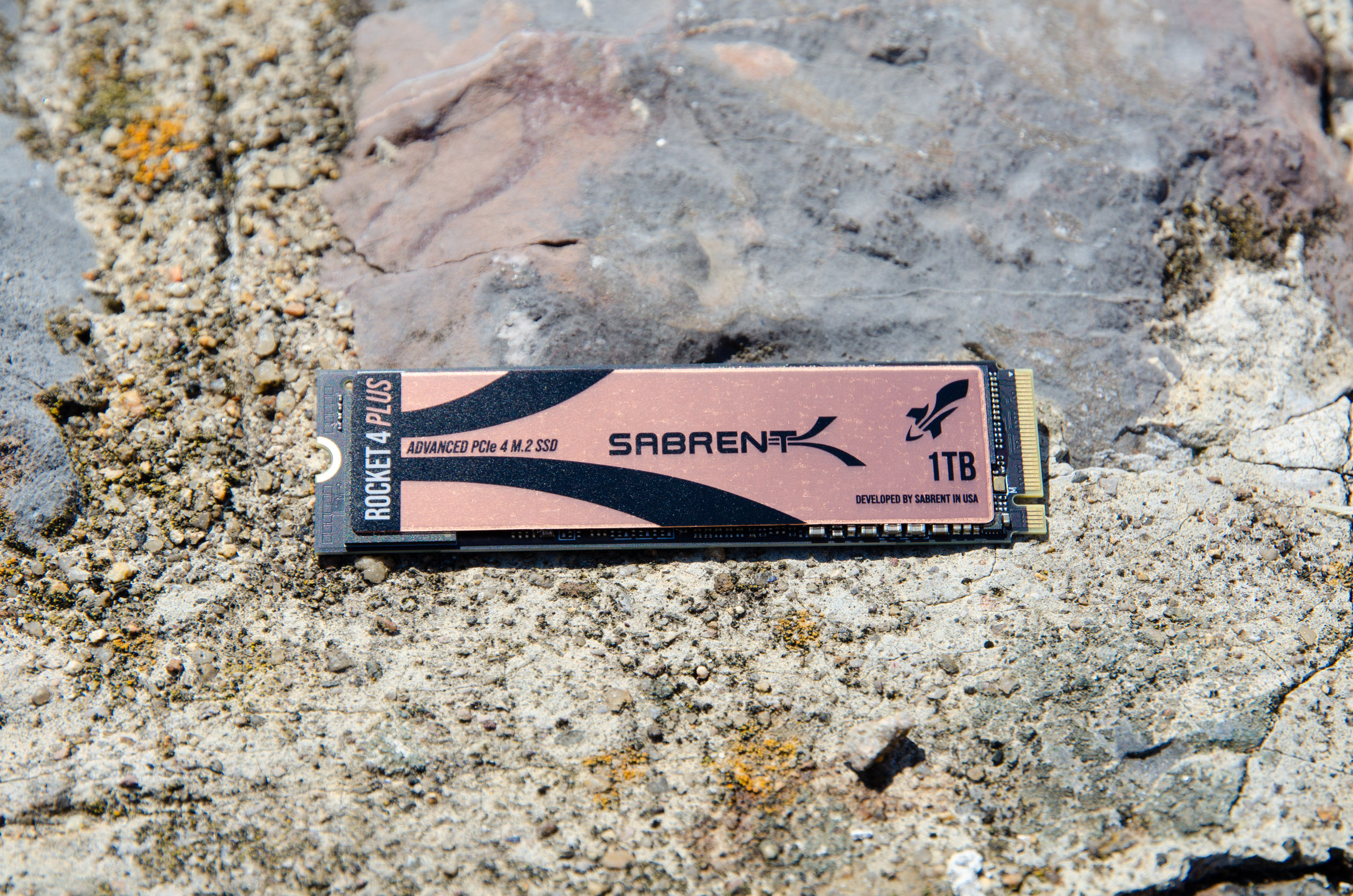 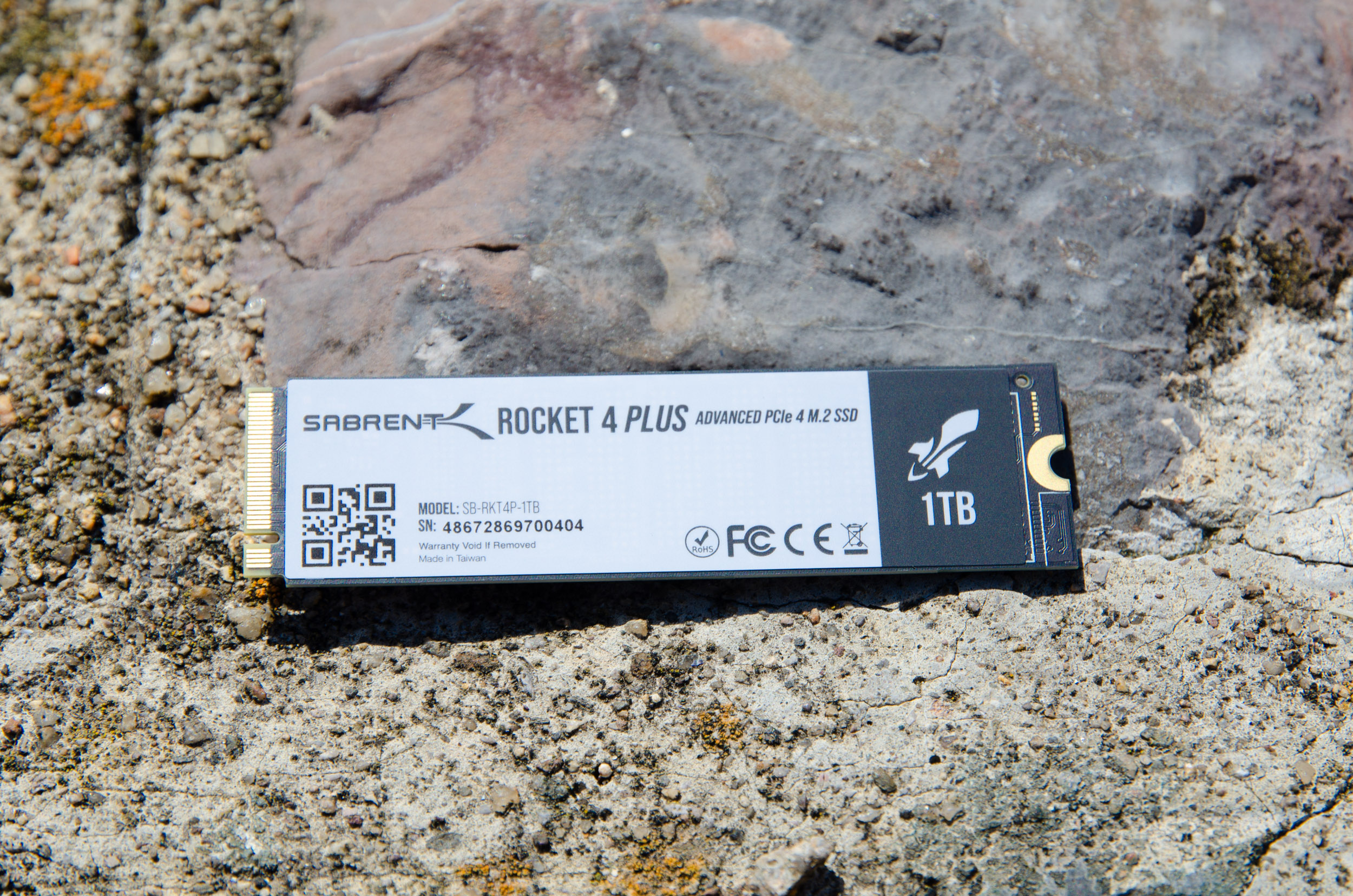 Then the heatsink and its accessories are very nicely displayed inside. 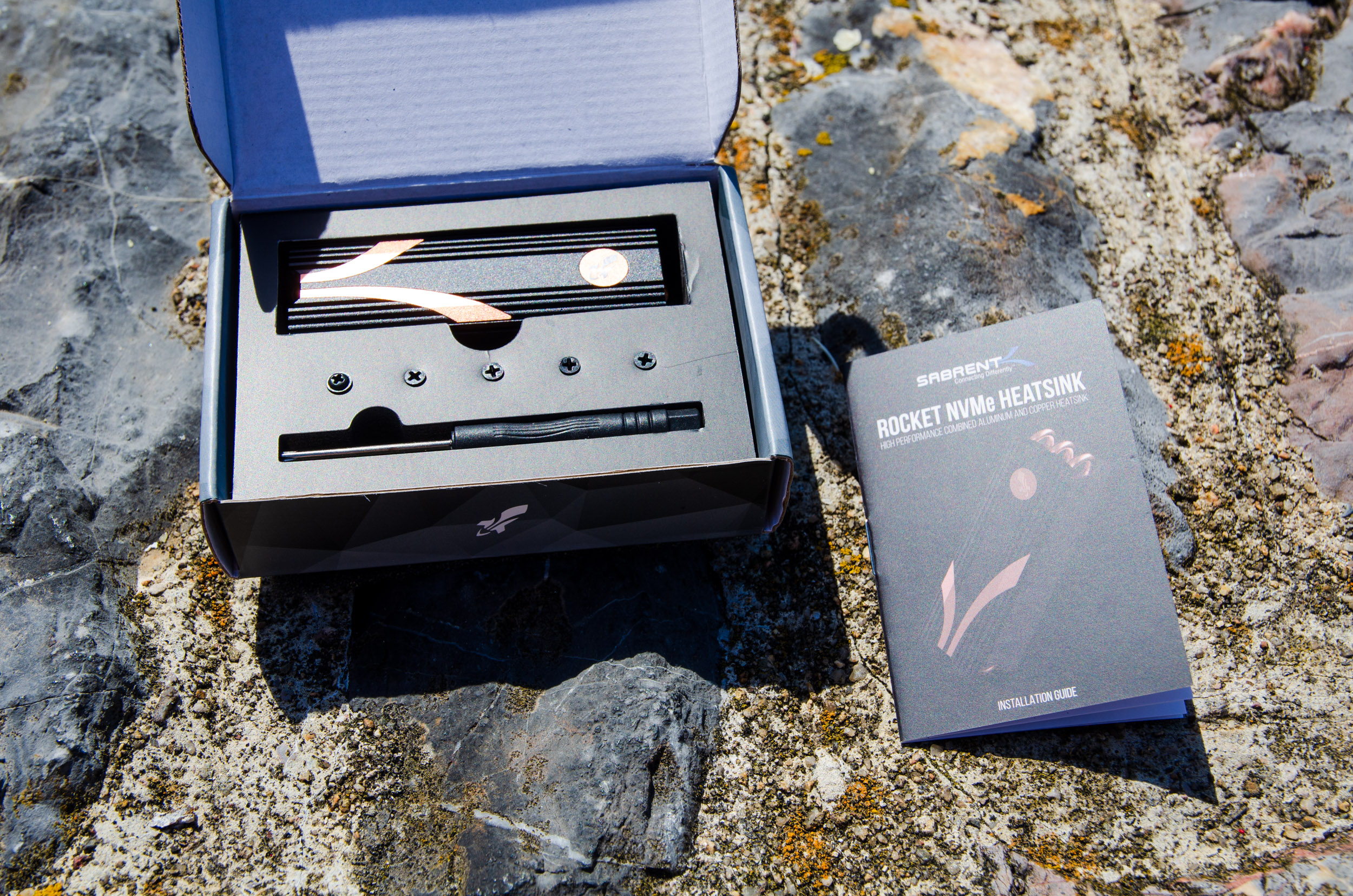 The 4 screws from the right are to secure the aluminium bottom tray to the main heatsink while the first screw is longer than the regular M.2 screws on purpose; so make sure you don’t lose it.

As we saw in the intro, the whole assembly is layered from top to bottom as follows: 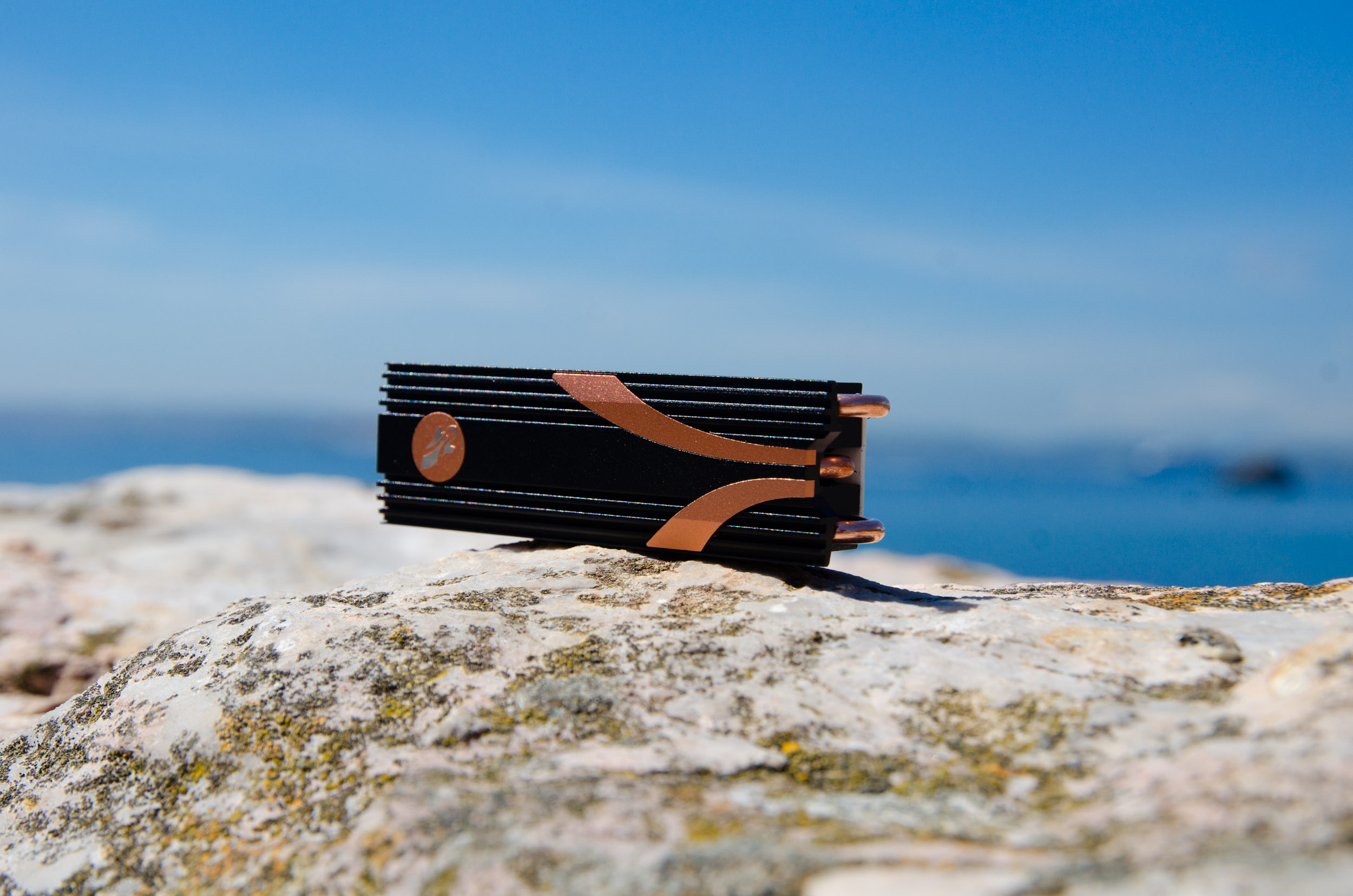 * A top heatspreader
* 3x copper heatpipes
* The main heatsink which is made from aluminium
* The top thermal pad which is already pre-applied
* (Insert your desired M.2 here)
* The last thermal pads depending on which M.2 you use, either a single or double sided variant
* The securing cage/tray that uses 4 screws to be secured into the main heatsink 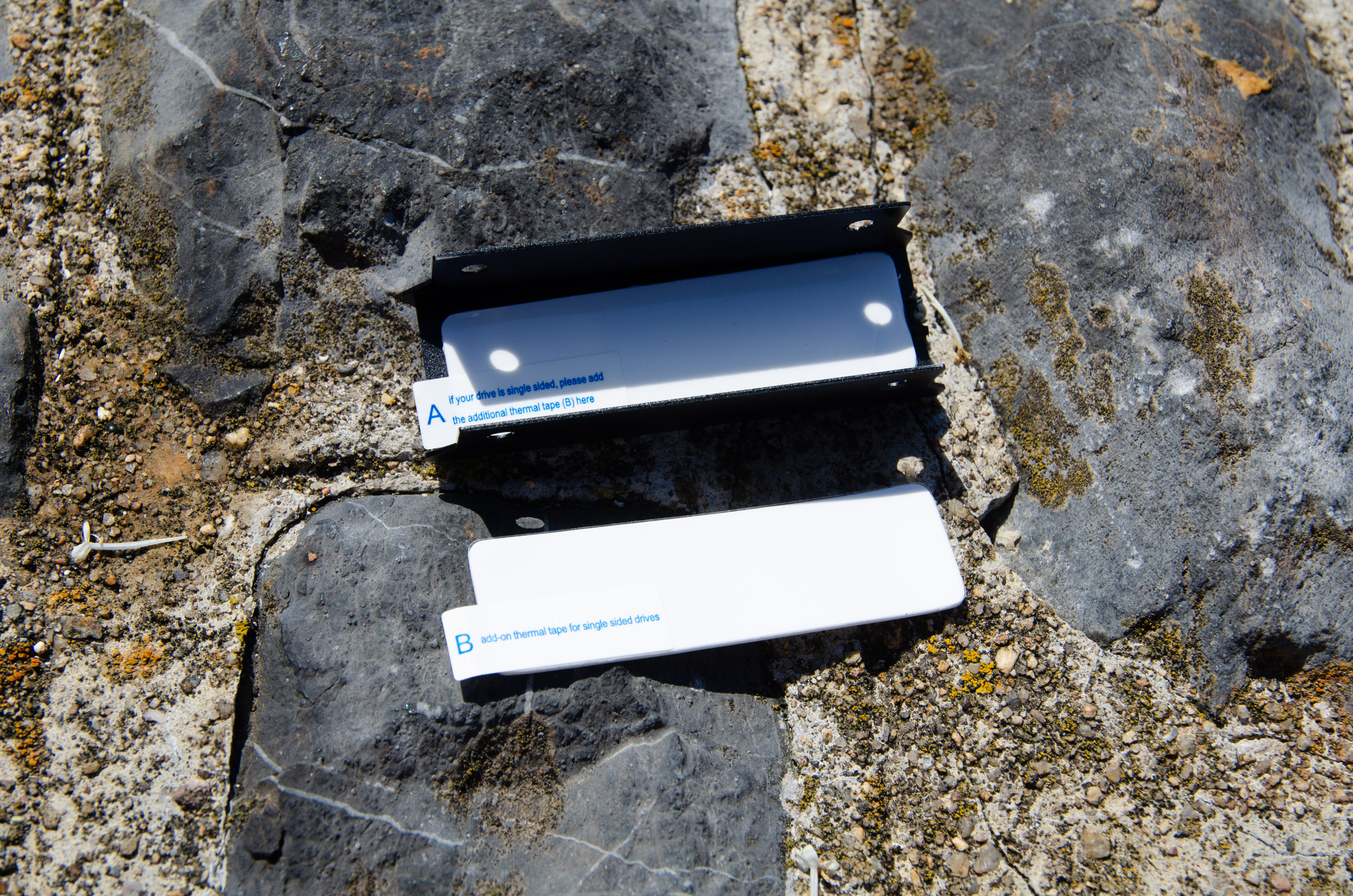 Since we will test the heatsink onto the Sabrent Rocket 4 Plus 1TB SSD, we will need to use all of the included pads since the drive is a single sided one. 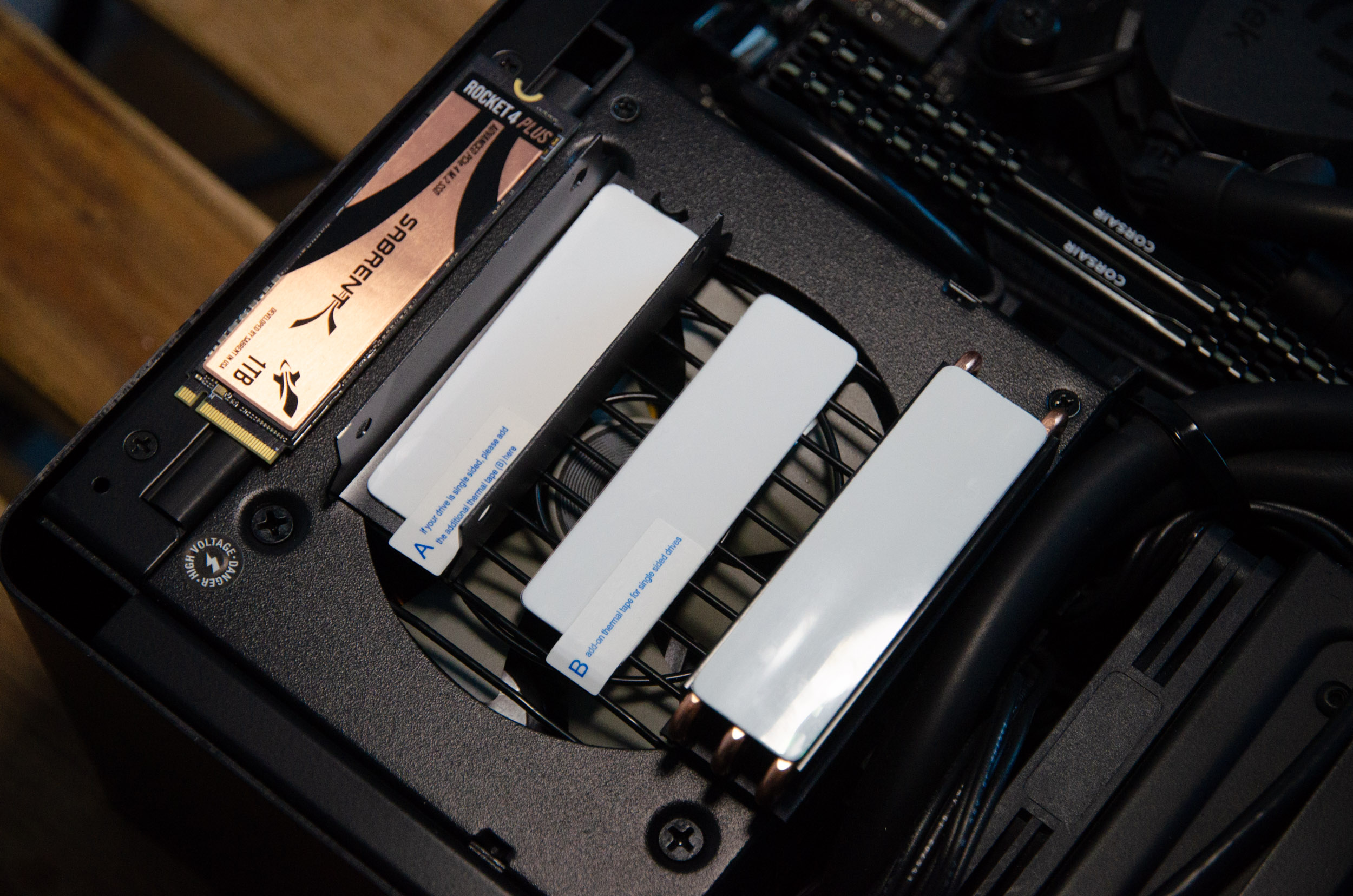 The final observation, is to make sure that you install this side of heatsink that has that shorter middle heatpipe. This is to access the securing bolt onto the motherboard. 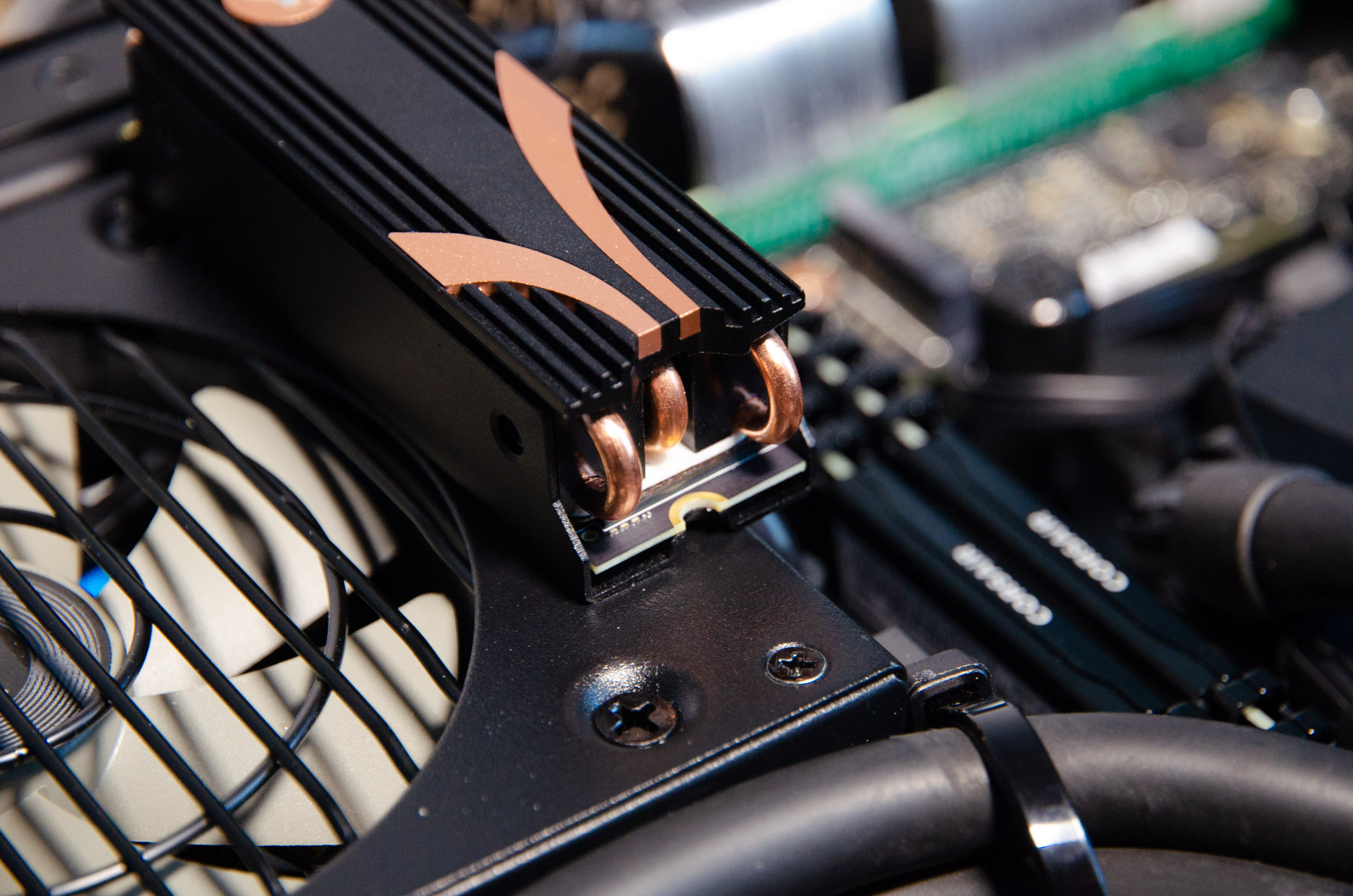 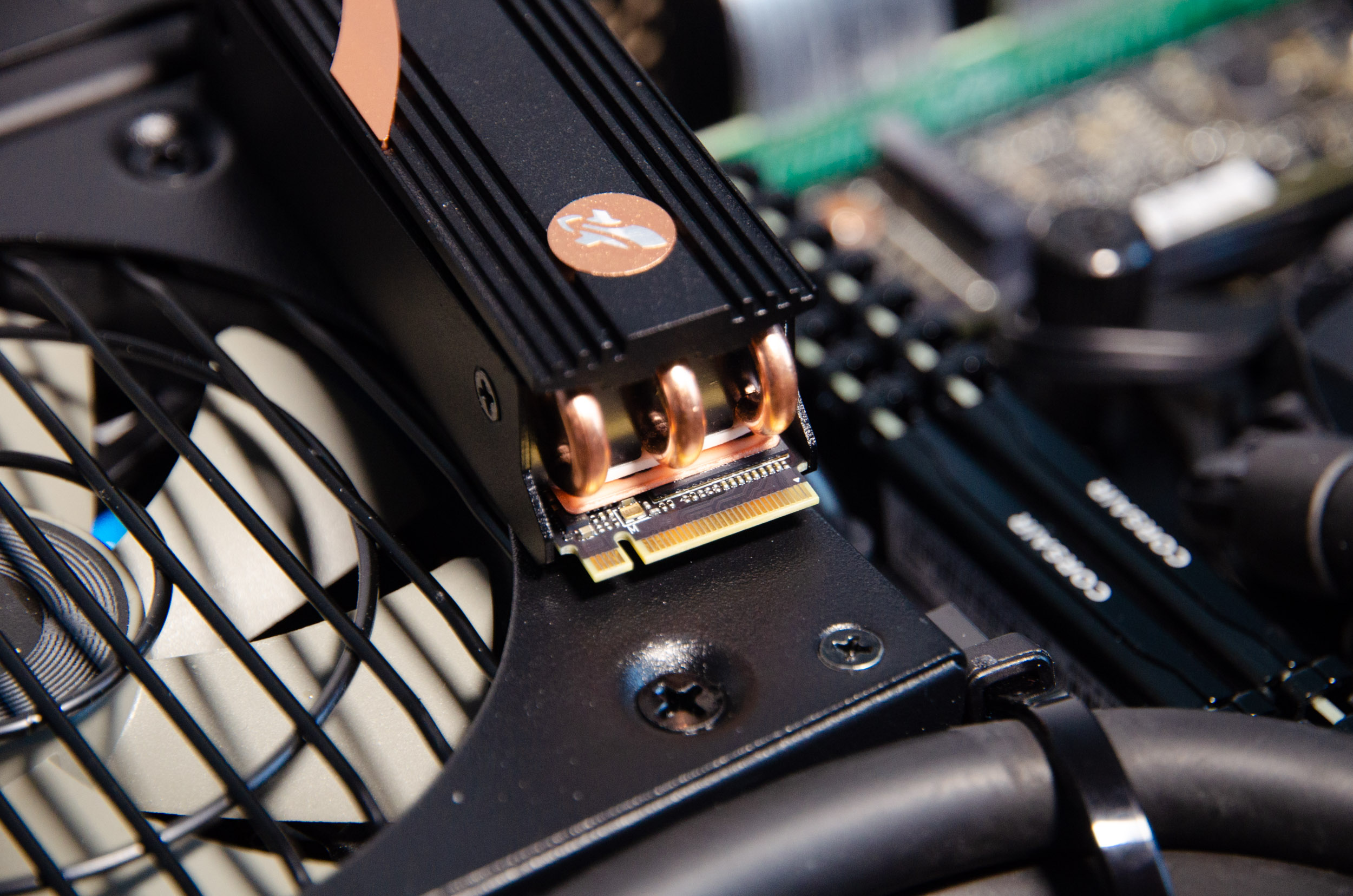 * Synthetic and real life big file transfer tests – a game folder of 68GB of mixed files and a single 8GB .mkv video file to test the burst speed and the SLC cache if present.
* All SSDs were secure-erased before our tests started
* Between tests, drives are left idle for 1 minute to allow them to flush and reorganise their internal data.
* Steps have been taken to ensure that the CPU’s power-saving features don’t interfere with any of our results. All of the CPU’s low-power states have been disabled.
* In order to minimise random variation, each of the real-life performance tests are run a few times with reboots in-between tests to reduce the impact of disk cache.
* (SATA SSDs only) Make sure you use a SATA 6Gbps capable motherboard and a matching cable to avoid bottle-necking. Then double check in the BIOS that you have the AHCI mode activated for another maximum performance tip.
* For the Gen4 x4 M.2s, you have to make sure you have a compatible motherboard that accepts and delivers the new bandwidth. Otherwise, it will work only in Gen3 x4 mode.
* All of the benchmarks were done with a 92mm side fan placed 2cm away and set at 40% RPM. Then the temperature scenarios and the heatsink were tested separately with an ambient temp of 24°C.
* For AMD users, make sure you update your motherboard chipset drivers from here. 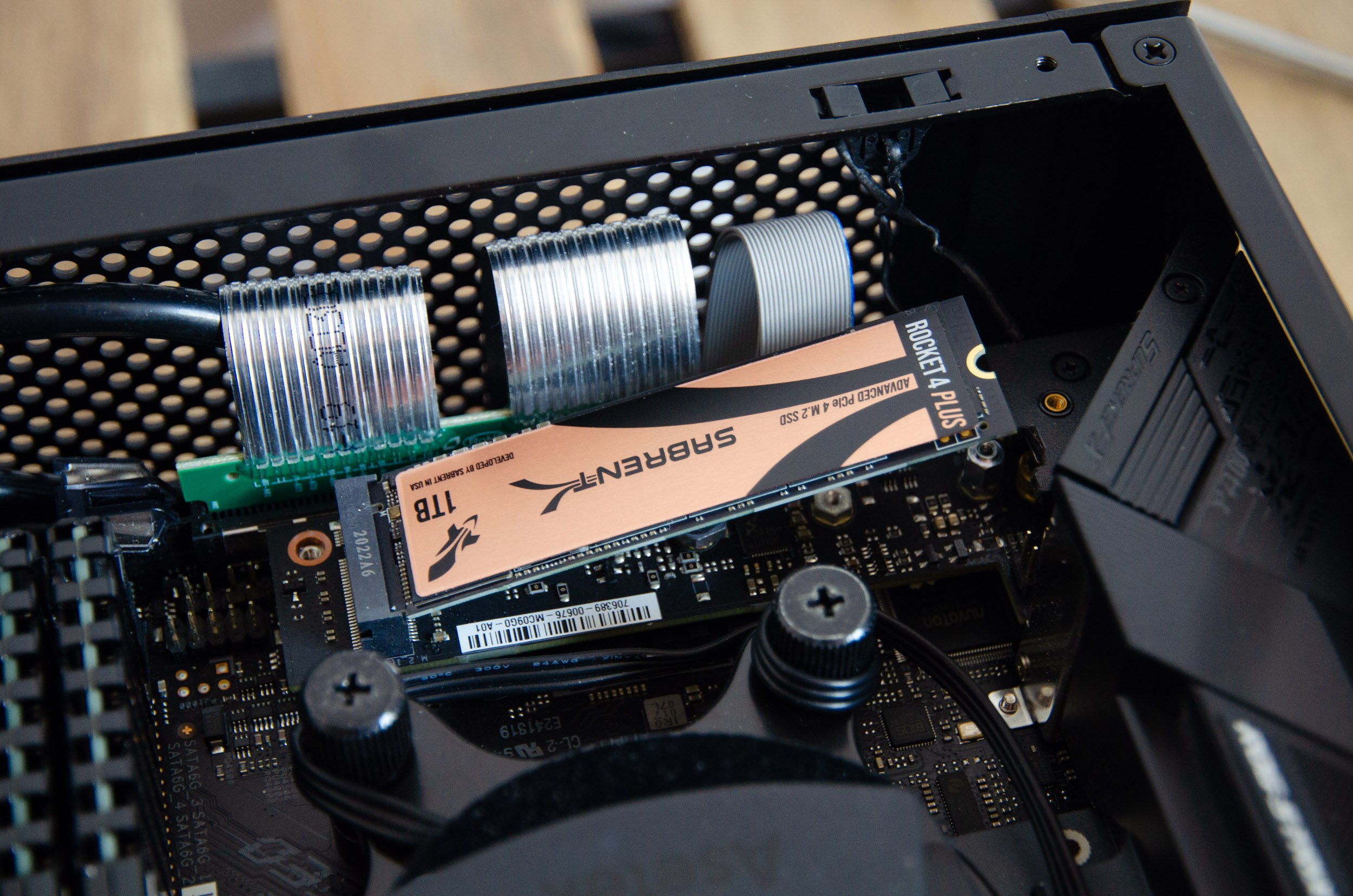 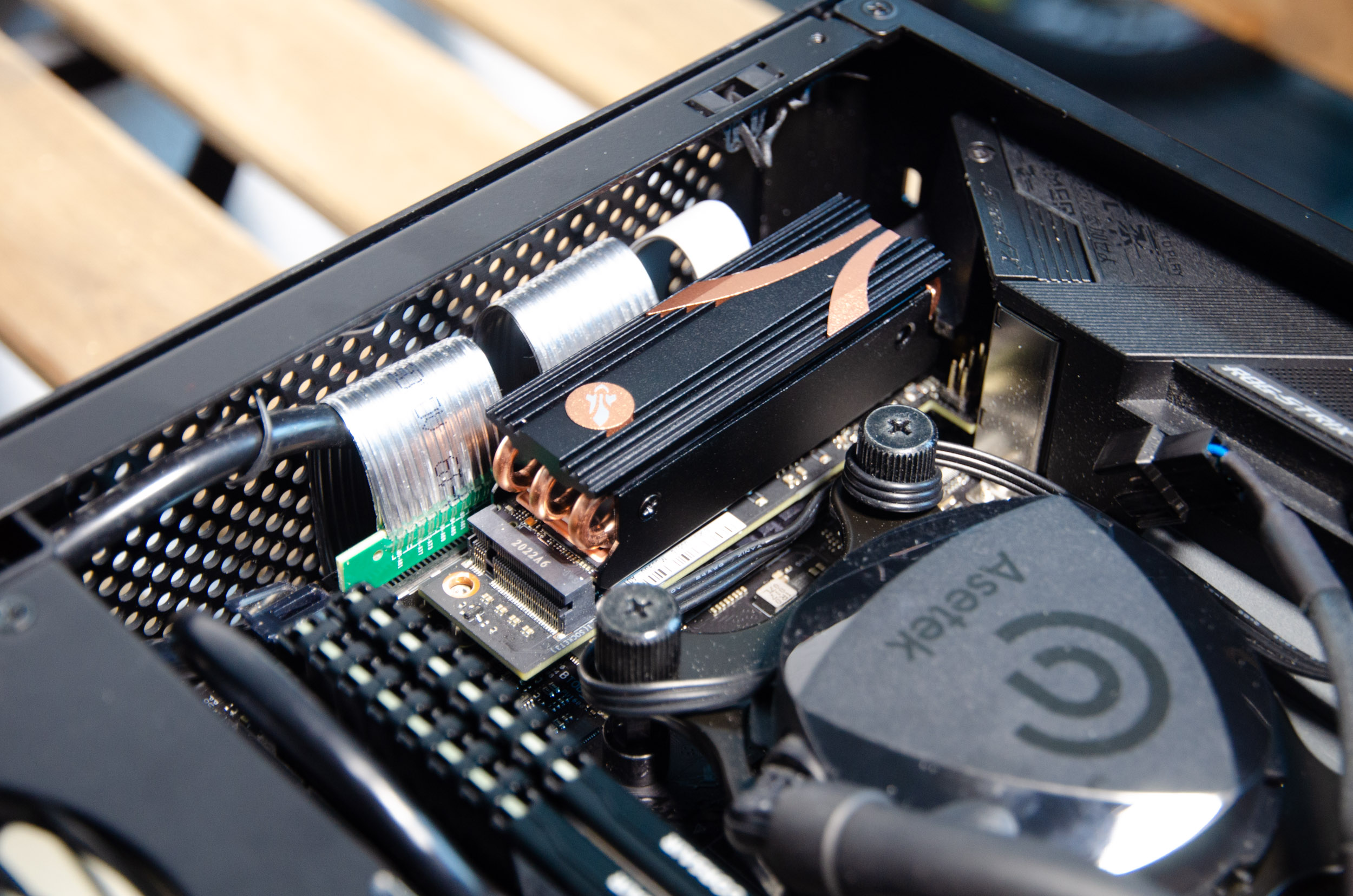 Before we begin our standard testing suite, let’s have a look at Sabrent’s highly valuable proprietary and free SSD management – the ‘Rocket Control Panel’. Also where you will find access for the Acronis cloning software and you can downloaded it here. Running the built-in disk speed test, we get those impressive advertised numbers ! 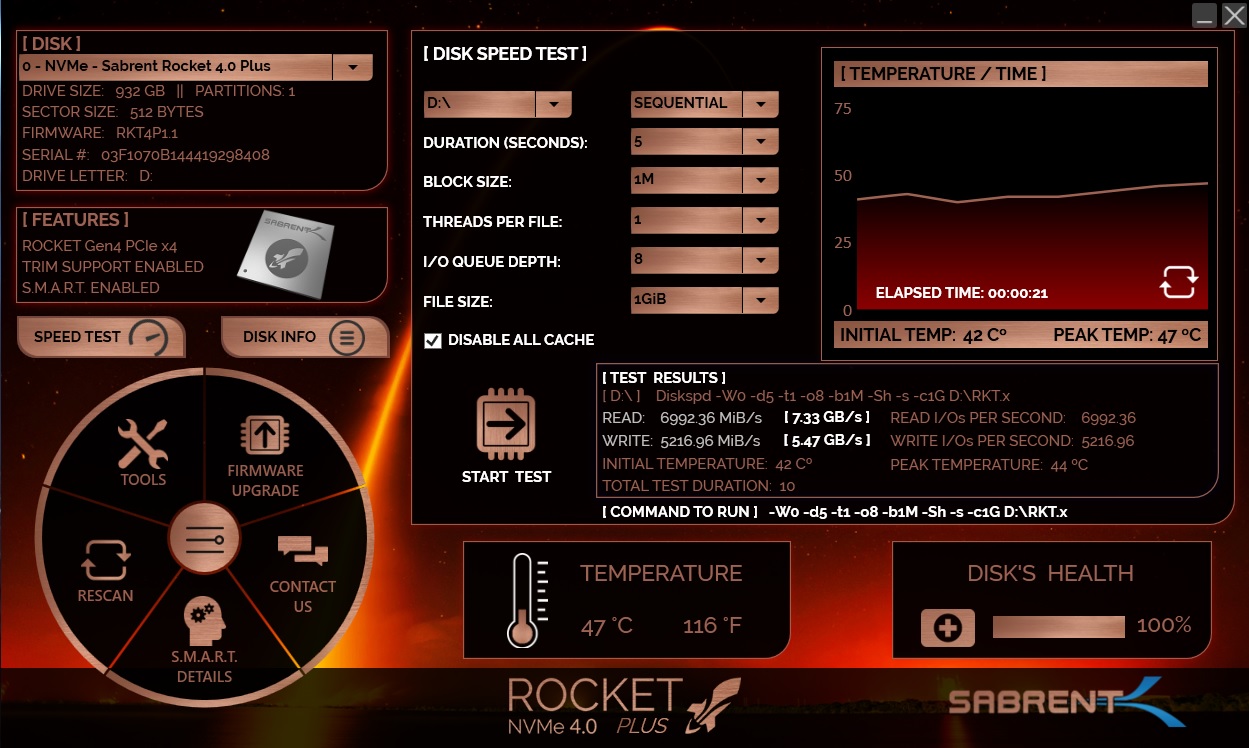 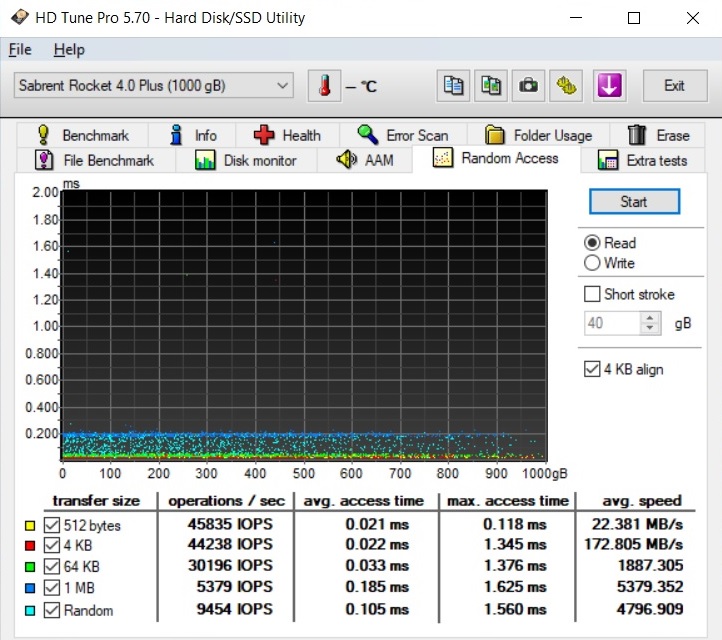 It’s really easy to gauge that we have a new king in the charts; the Sabrent Rocket 4 Plus 1TB just shreds through them. 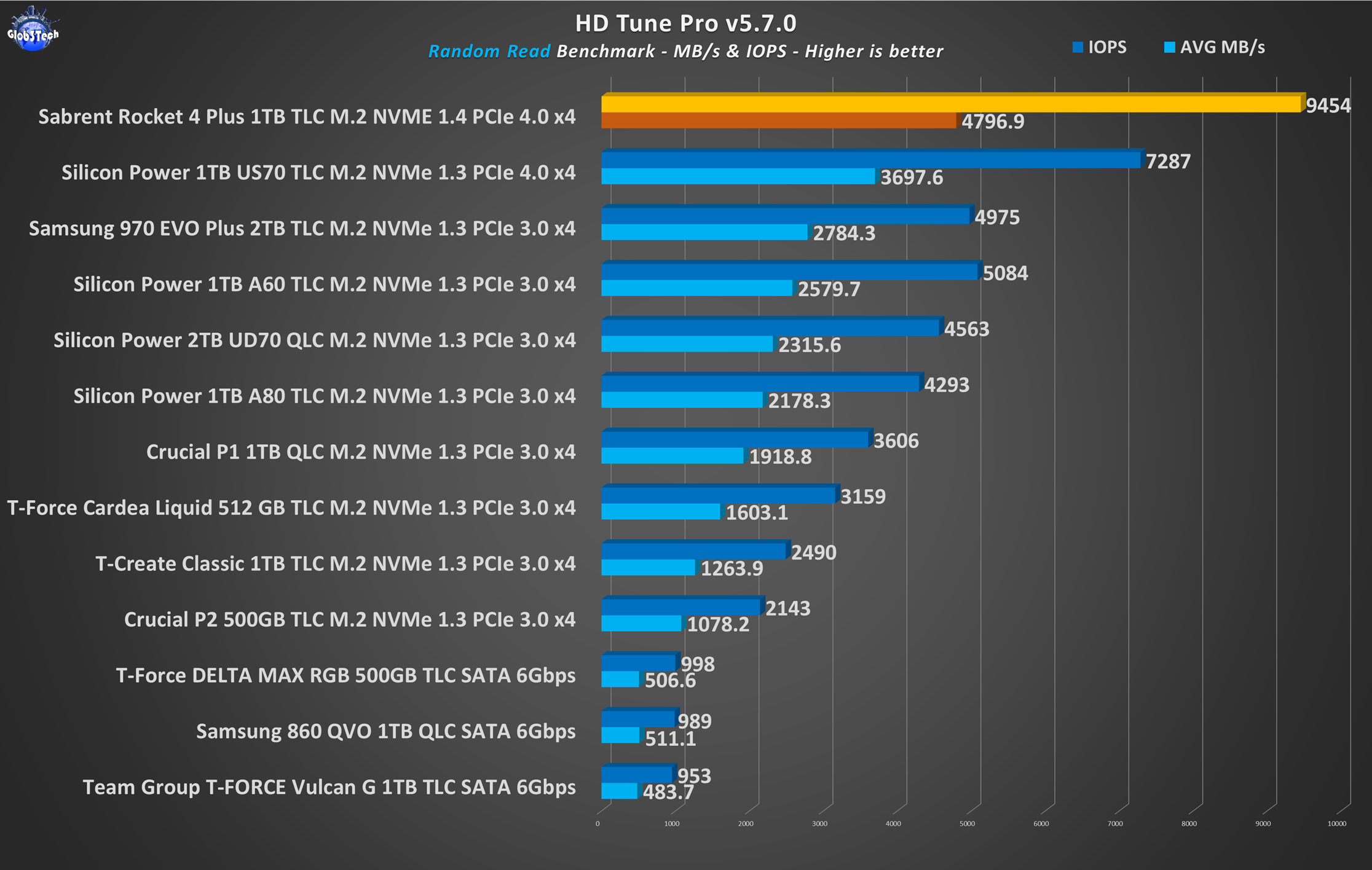 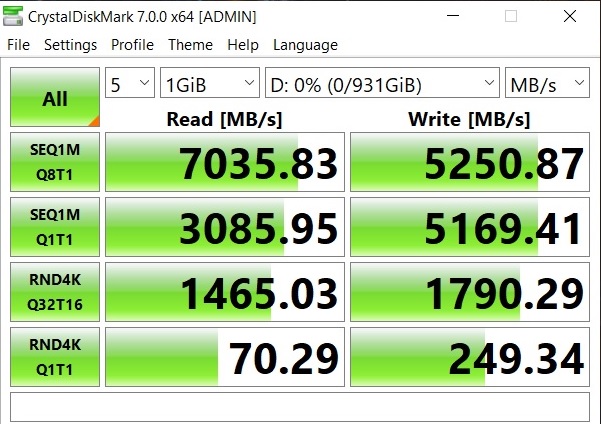 In the “read” benchmark we get another all time record for the SEQ 1MQ8T1 test which also confirms the max theoretical bandwidth offered by the Sabrent drive. 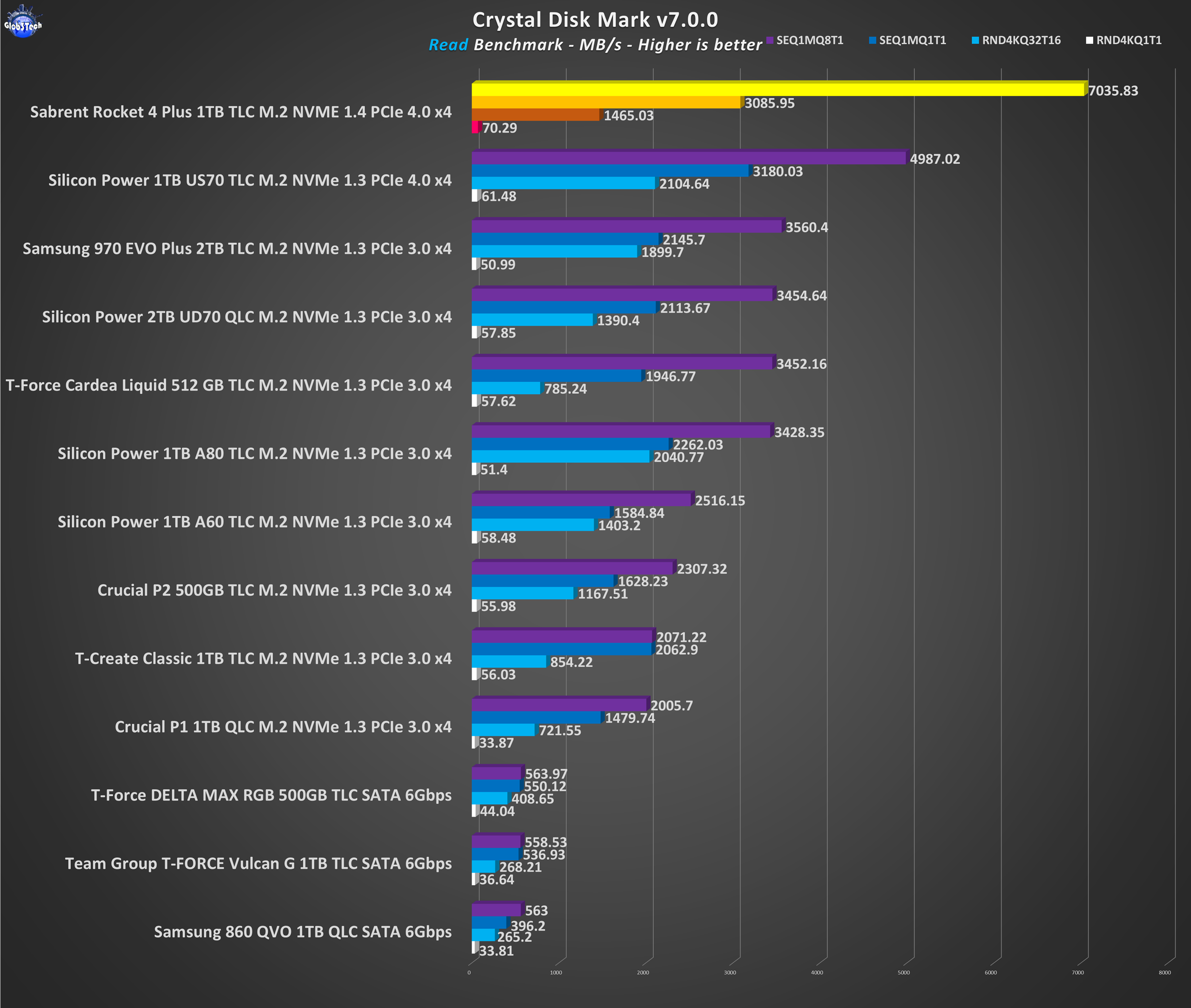 Moving to the “write” test, which is even more important in real life scenarios and here things look really good as well. 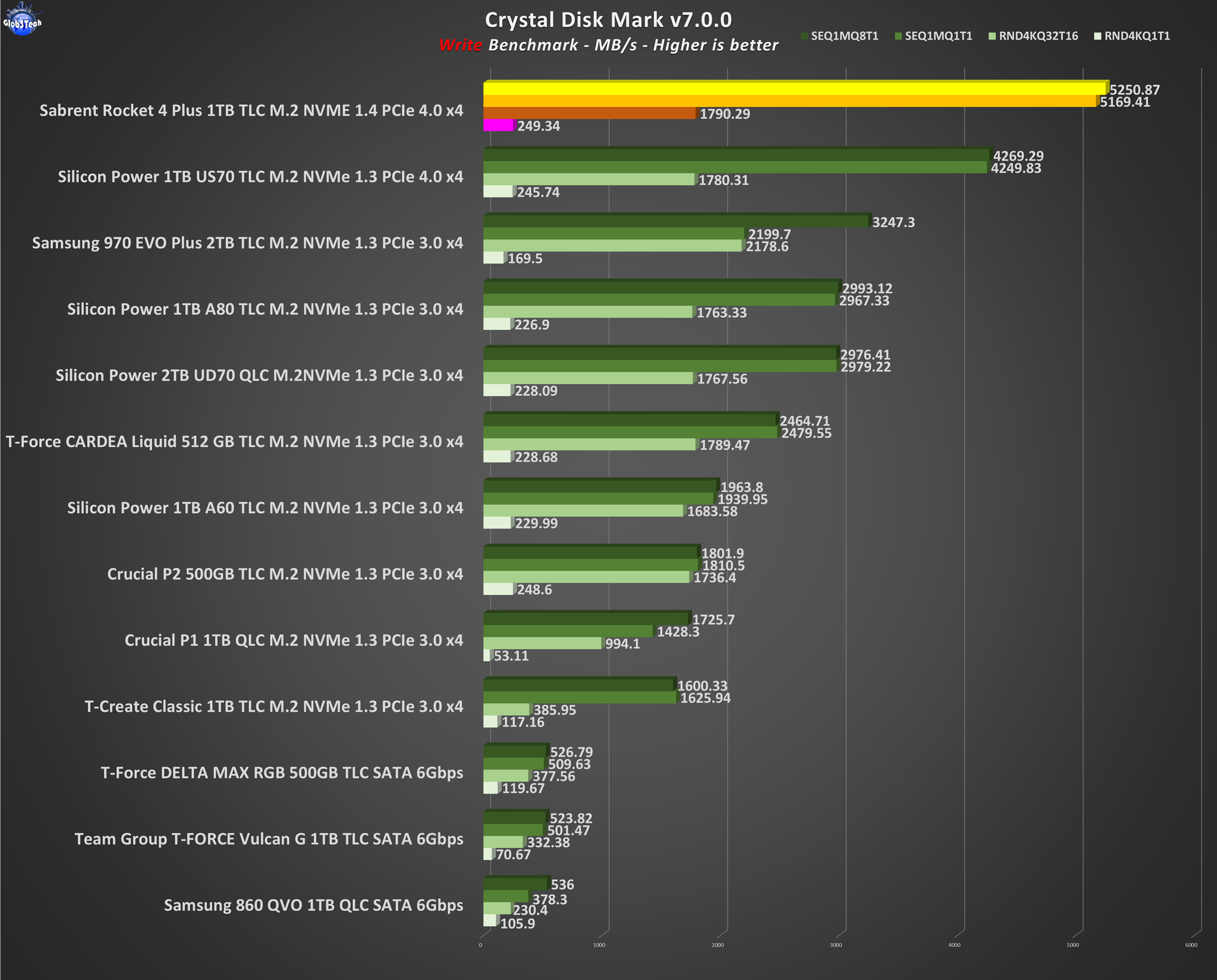 To conclude the synthetic tests, here is ATTO which is another performance measurement tool to test any manufacturers RAID controllers, storage controllers, host bus adaptors (HBAs), hard drives and SSD drives. This test just reconfirms what we saw in the previous one. 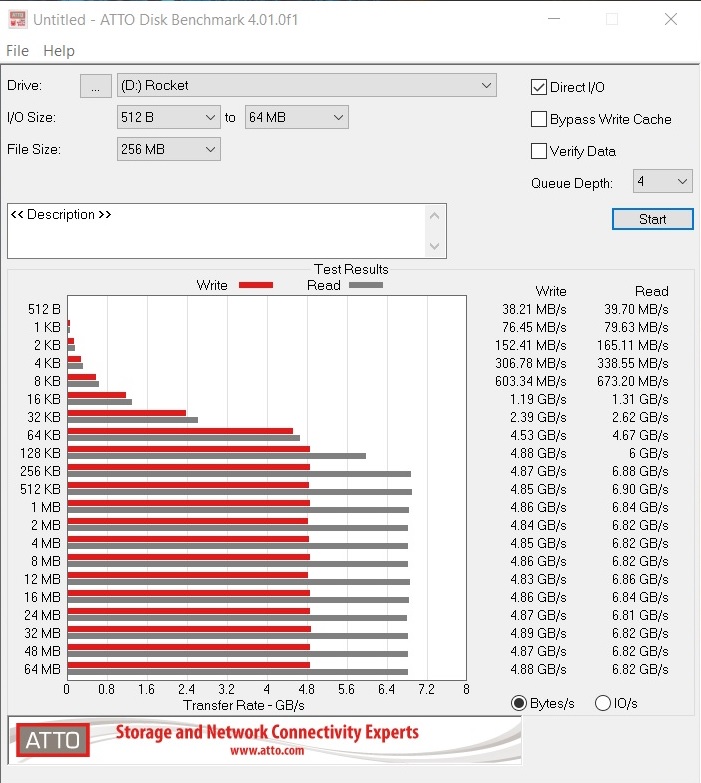 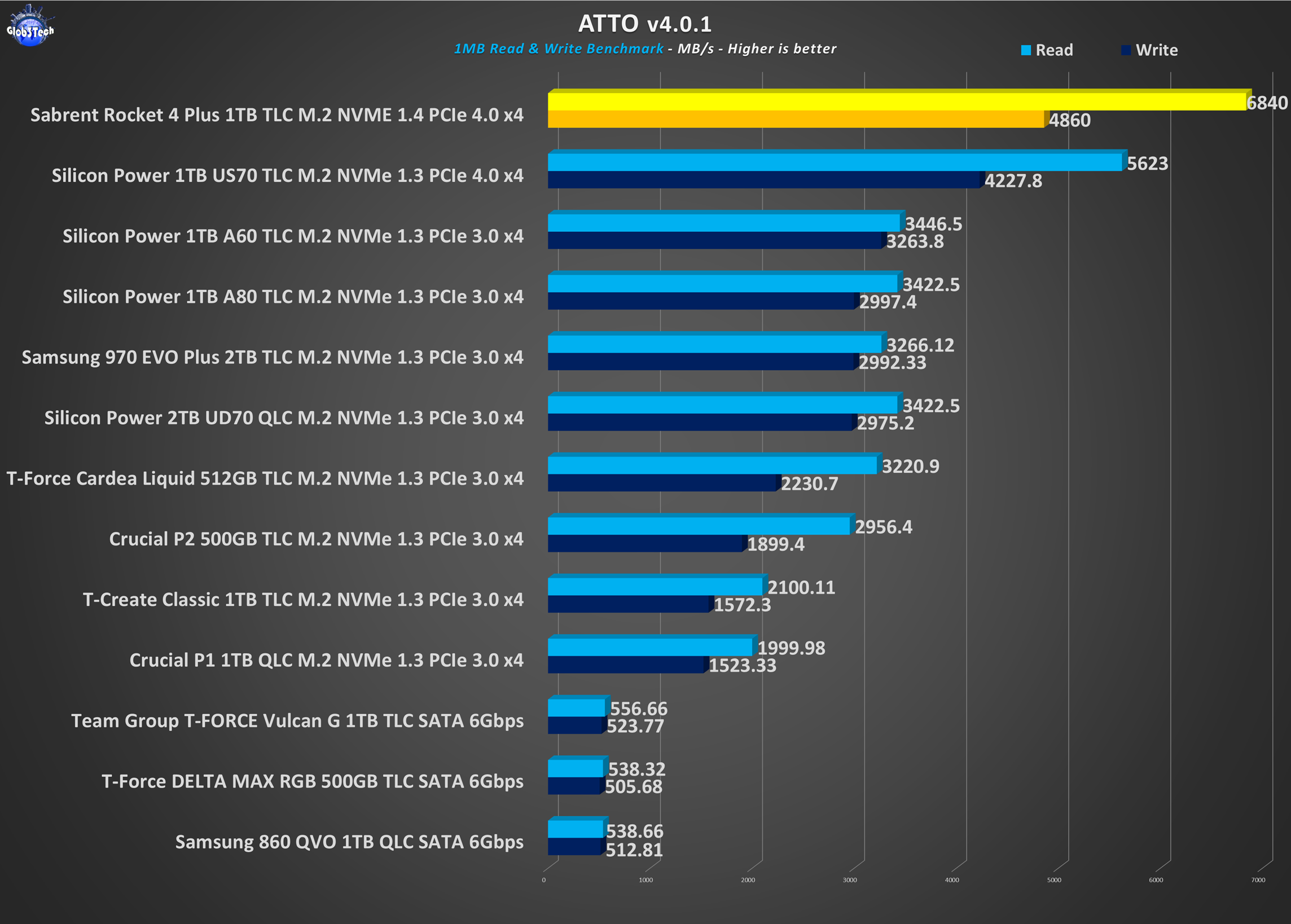 The final practical test revolves around some real life copy tests. Firstly, we will copy to the SSD a single 8GB .mkv video file to test the burst speed followed by a copy of the same file, from the SSD onto itself. Then the same process is repeated but with a big 68GB installation folder from The Division 2’s game. Overall for both scenarios, this is what we like to see, consistency all the way through with just a minor slow start in the last test.

Now let’s inspect the operating temps especially in a small form factor build like the DAN A4-SFX enclosure. The Sabrent drive was in the motherboard’s front port which is the main one and it’s fully Gen4 x4 compatible. All the above tests were done with a 92mm fan placed at ~2cm away from the drive and set at 40% RPM. Then the recorded ambient temp was 24°C. Thus below we have a benchmark run in Crystal Disk Mark for 3 different scenarios in the following order:

1) No side fan/airflow/extra heatsink – As you can we get some thermal throttling above 75°C and the overall performance drops by a significant percentage especially in the write tests. 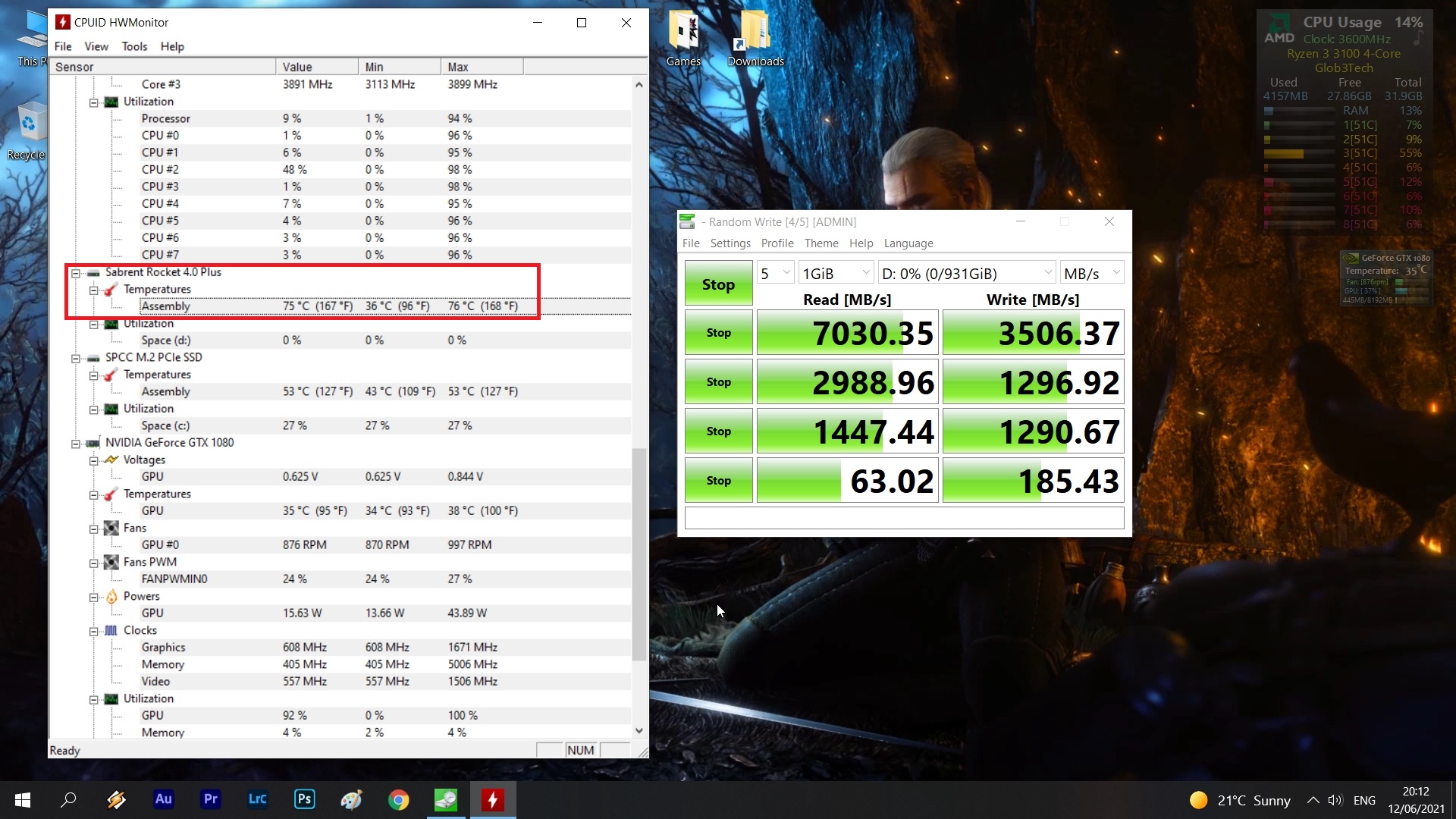 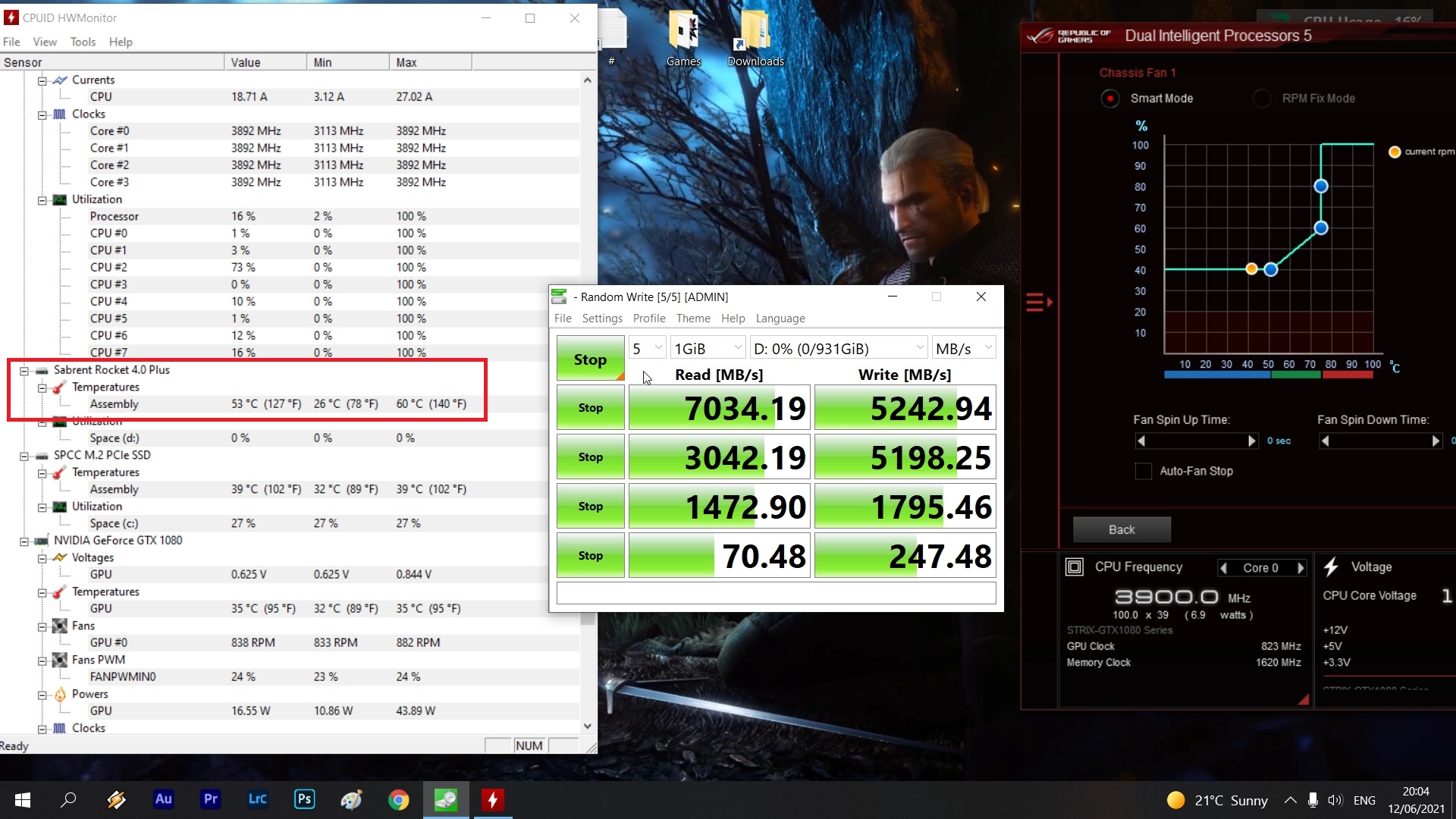 3) The Sabrent heatsink – The results are incredible, thus a testimony of how efficient it is even without additional airflow. The drive stays cooler by roughly 13°C over the fan which is just epic! 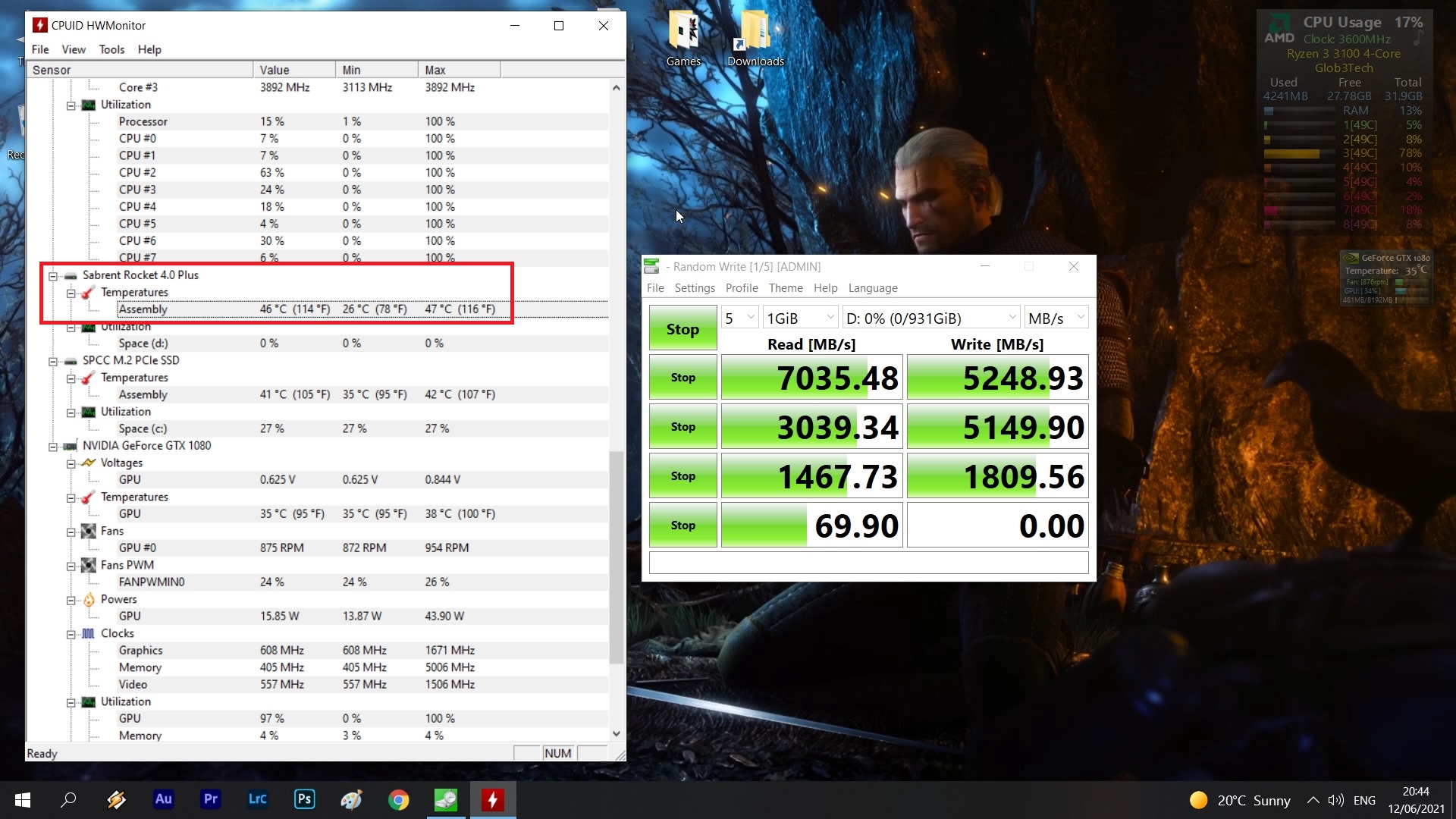 The Sabrent Rocket 4 Plus can only be described by one word – incredible ! It’s one of the fastest drives you can get for the money at the moment of writing this review. It has everything you need under the hood to perform and it truly delivers. Just make sure you offer it some decent cooling and it will not let you down. This is why they also offer the heatsink upgrade kit which is a no brainer given how well it cools and more importantly you can use it on any M.2 2280 drive! Thus both items get our maximum mark today.

A lot of thanks to Sabrent for supplying us with this rocket and its heatsink !