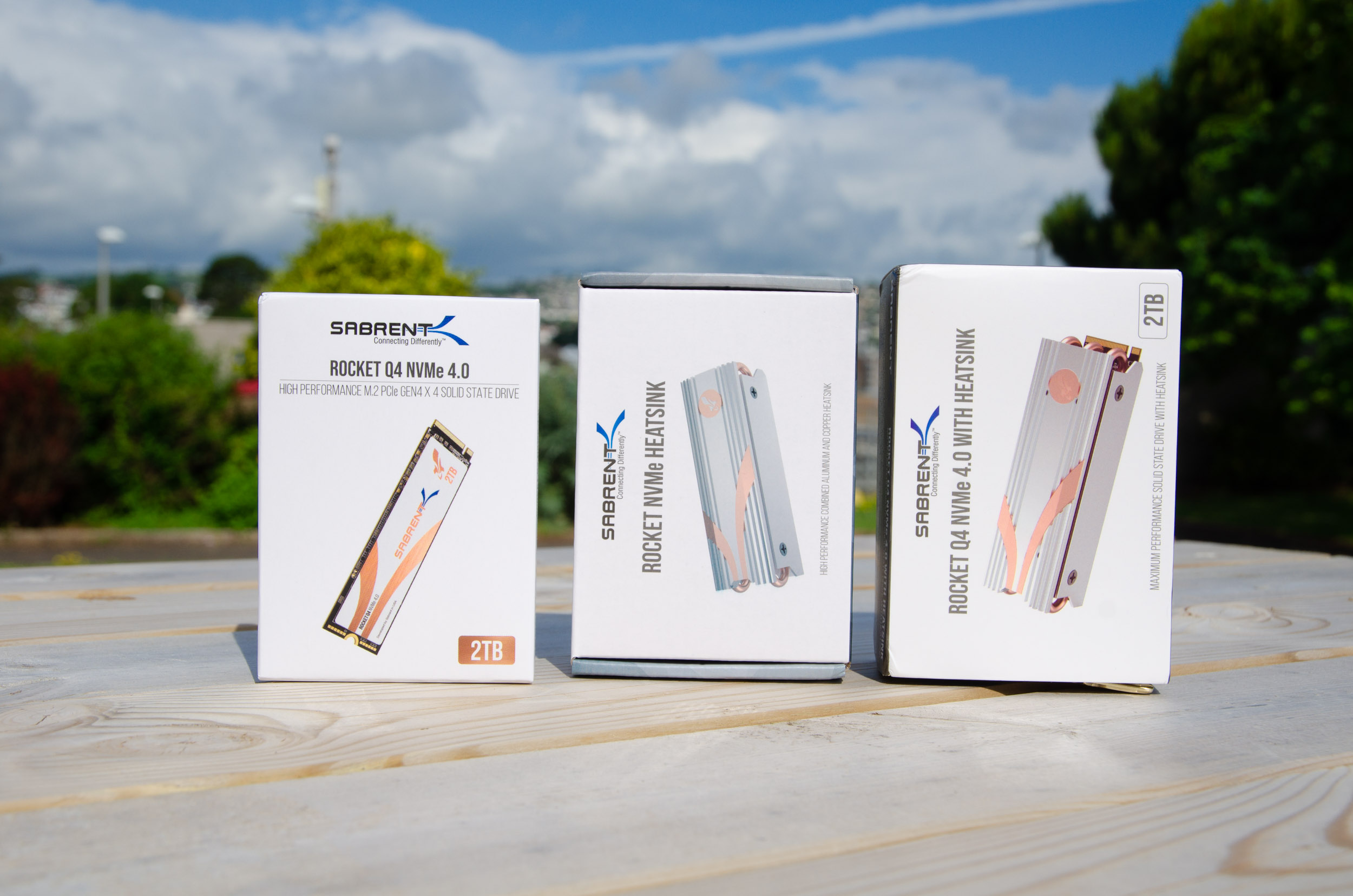 For some time now Sabrent has been leading the way in the PCIe 4.0 realm by releasing highly interesting and competitive SSDs, like we previously saw with the amazing Rocket 4 Plus.

Today we are testing their QLC Gen4x4 solution, dubbed the Q4 that is rated up to 4800 MB/s read and 3600 MB/s write for the 2TB variant (also our sample). It’s armed with a Phison E16 controller, Micron 96L NAND cells and Hynix DRAM that should achieve a nice balance of performance, capacity and value for money.

The Q4 series is available in 3 capacity options (1,2 and 4TB) and the pricing is reasonably good considering this is a Gen 4.0 QLC based NVMe drive. Sabrent also gives you the option to get the drives with or without the proprietary heatsinks if you want to save ~$20. However, as we saw from the previous review, it’s highly recommended you get the extra cooling anyway since it’s such a useful upgrade because you can use it on any single/double sided 2280 M.2. 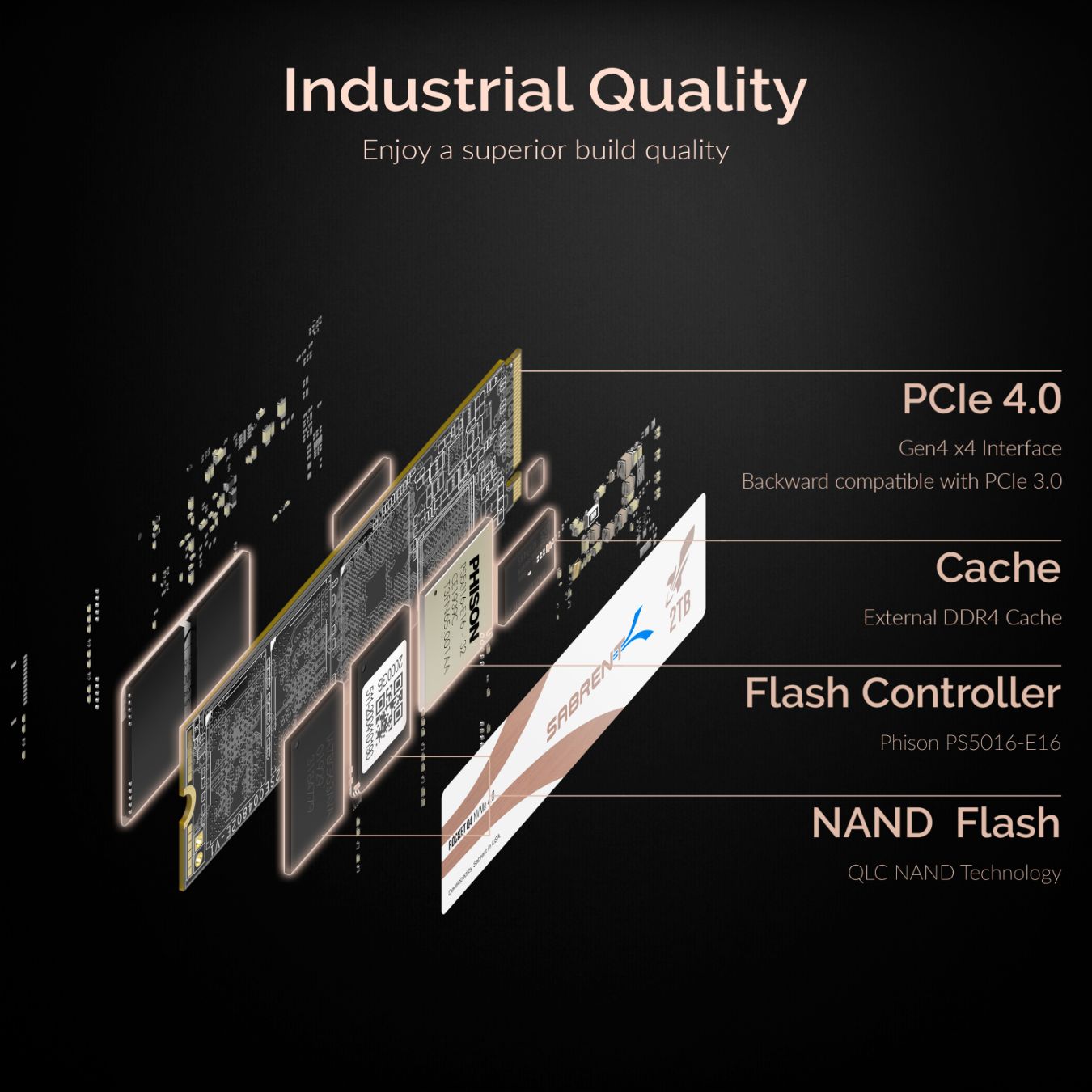 Since this a combo pack, you get the M.2 drive and the heatsink as well, in matching colours. Thus we have an all white theme with all of the main info printed on the front. 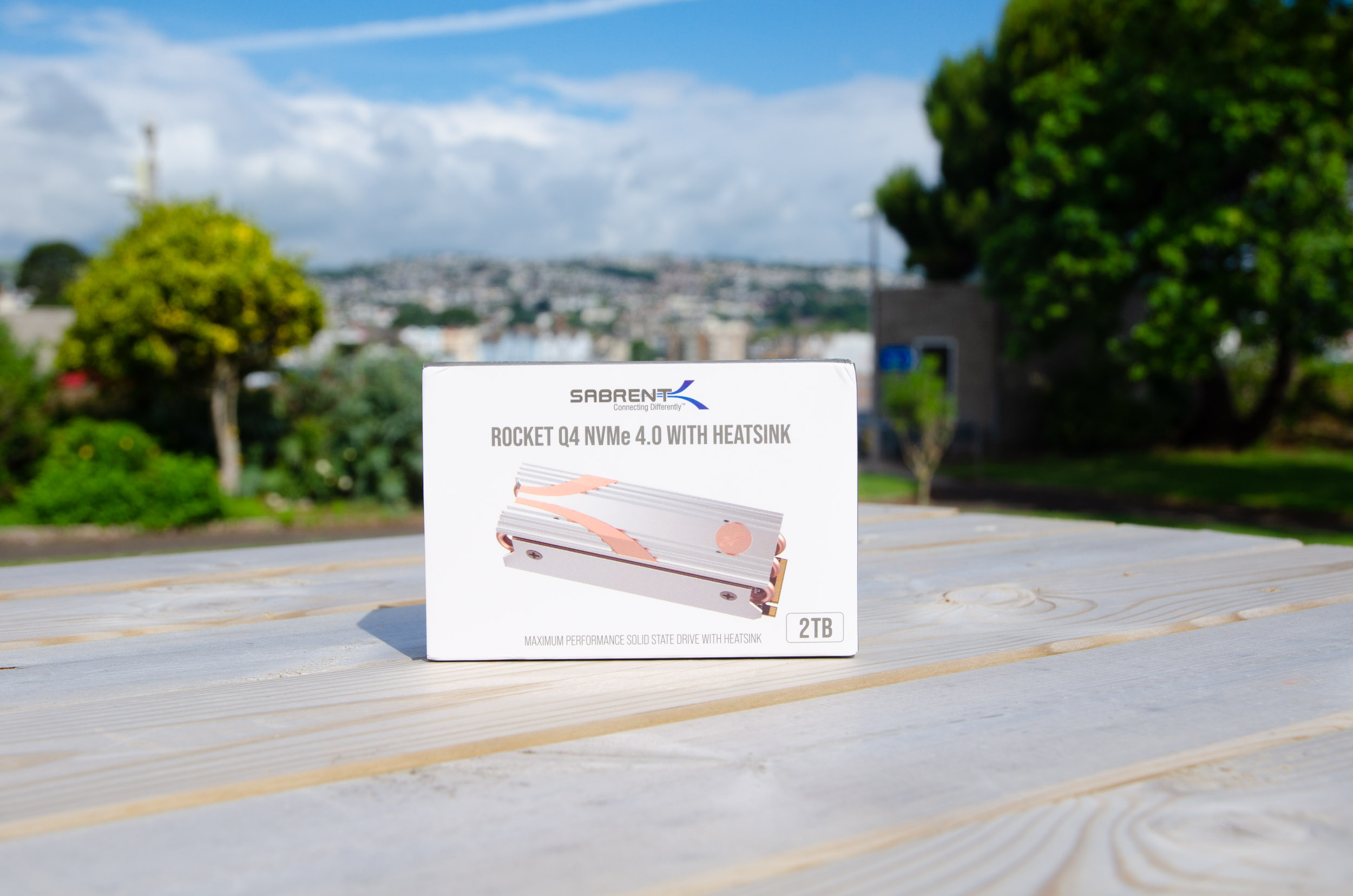 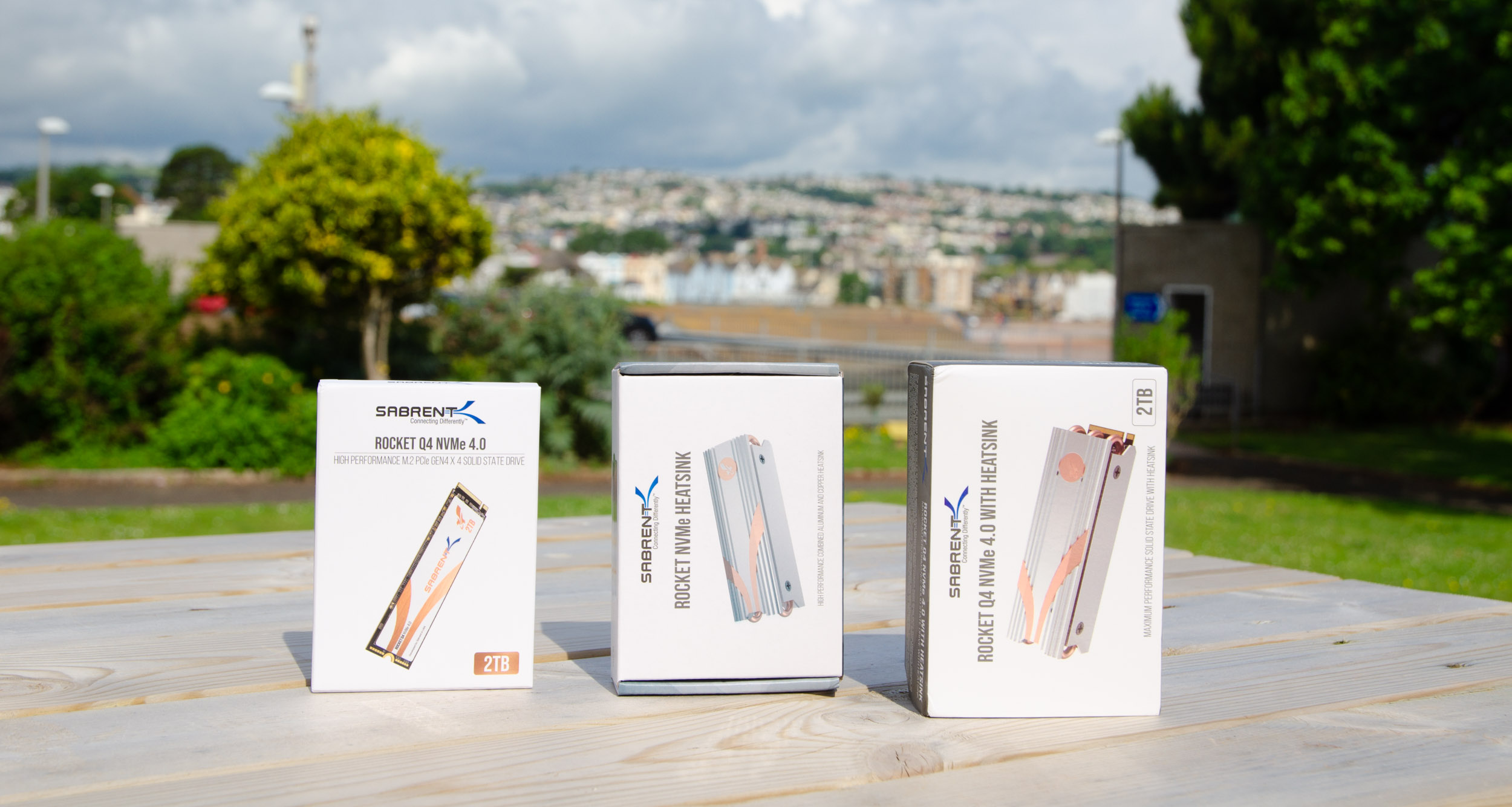 On the back we have a quick peak on how the heatsink is layered. 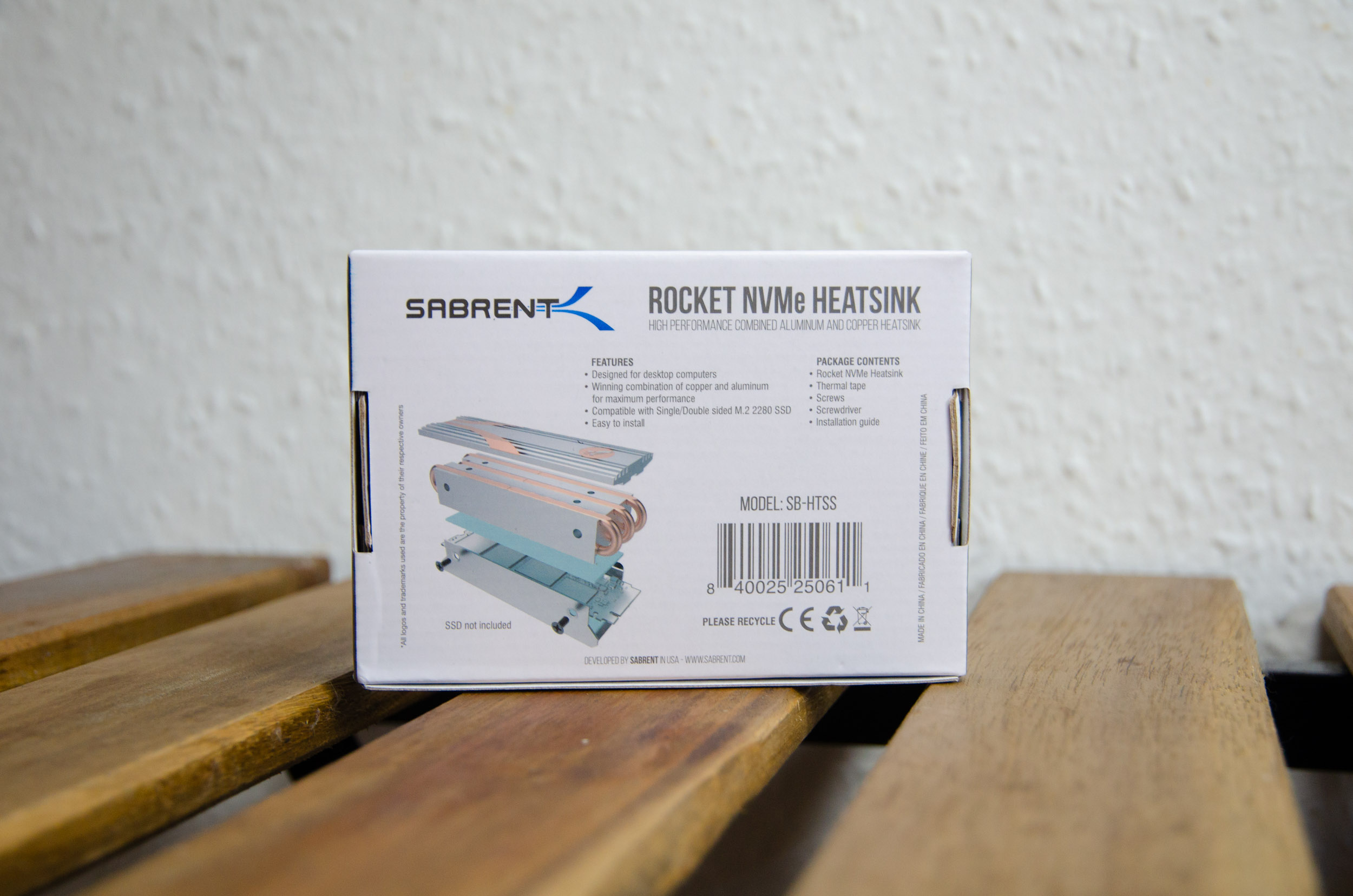 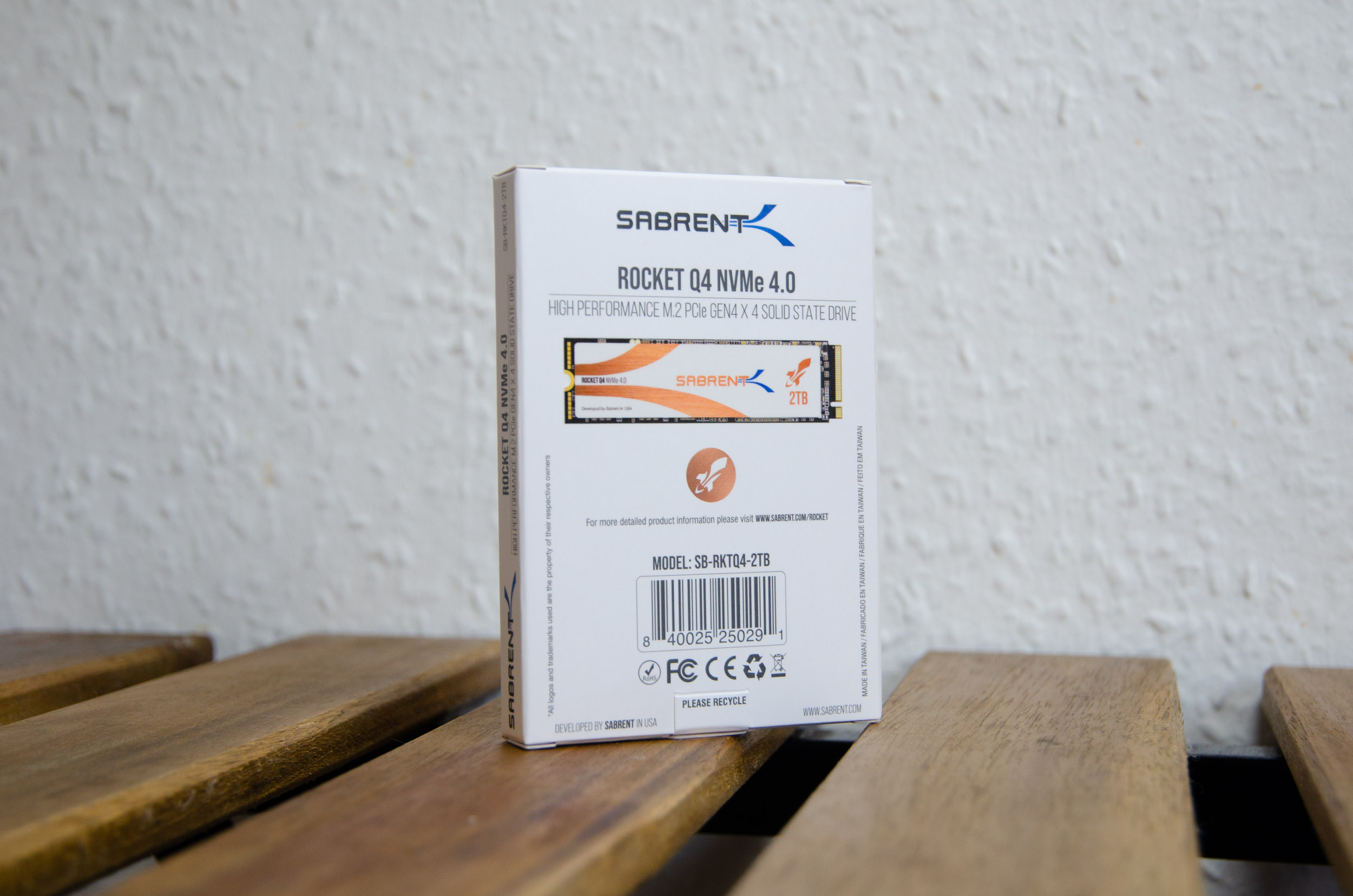 We highly appreciate that Sabrent ships their M.2 SSDs in a metal case for enhanced protection. 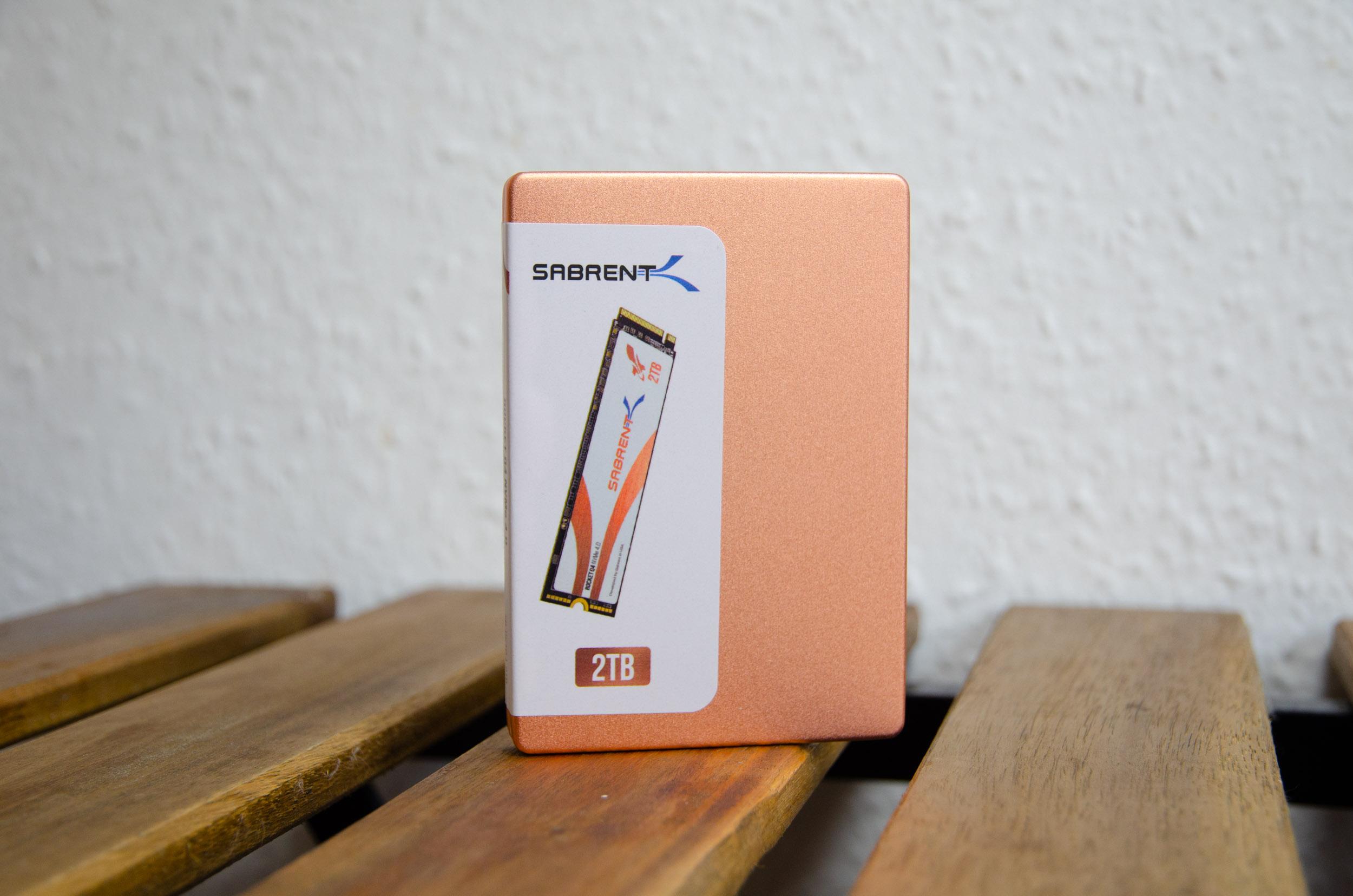 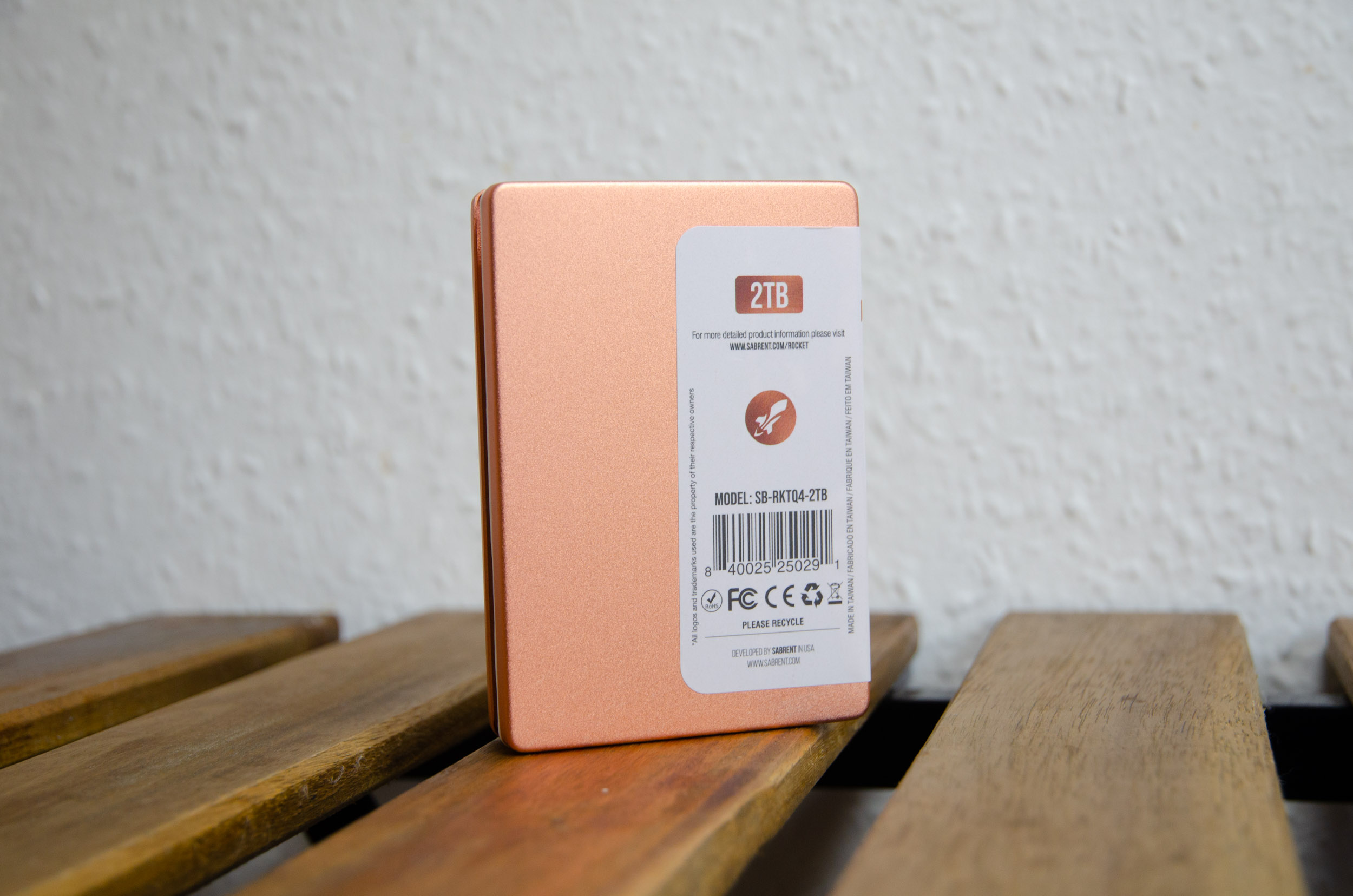 The only accessory present is the quick user’s guide. 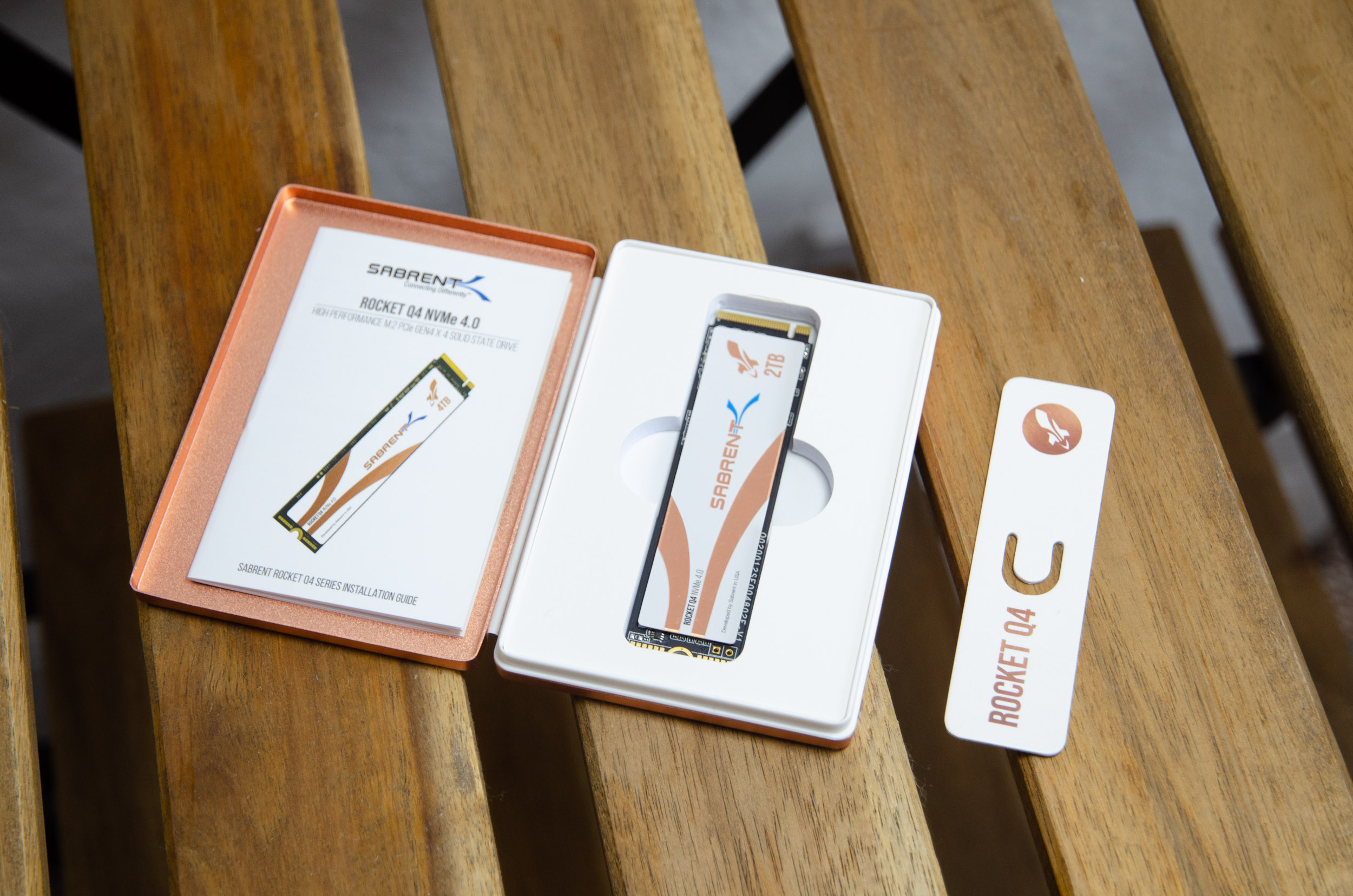 Regarding the heatsink, it’s nested safely inside with the help of foam, while its accessories are displayed for quick access. You get, besides the user’s guide, a handy mini screwdriver, 4x mounting screws for the heatsink assembly and one custom extra long M.2 screw. 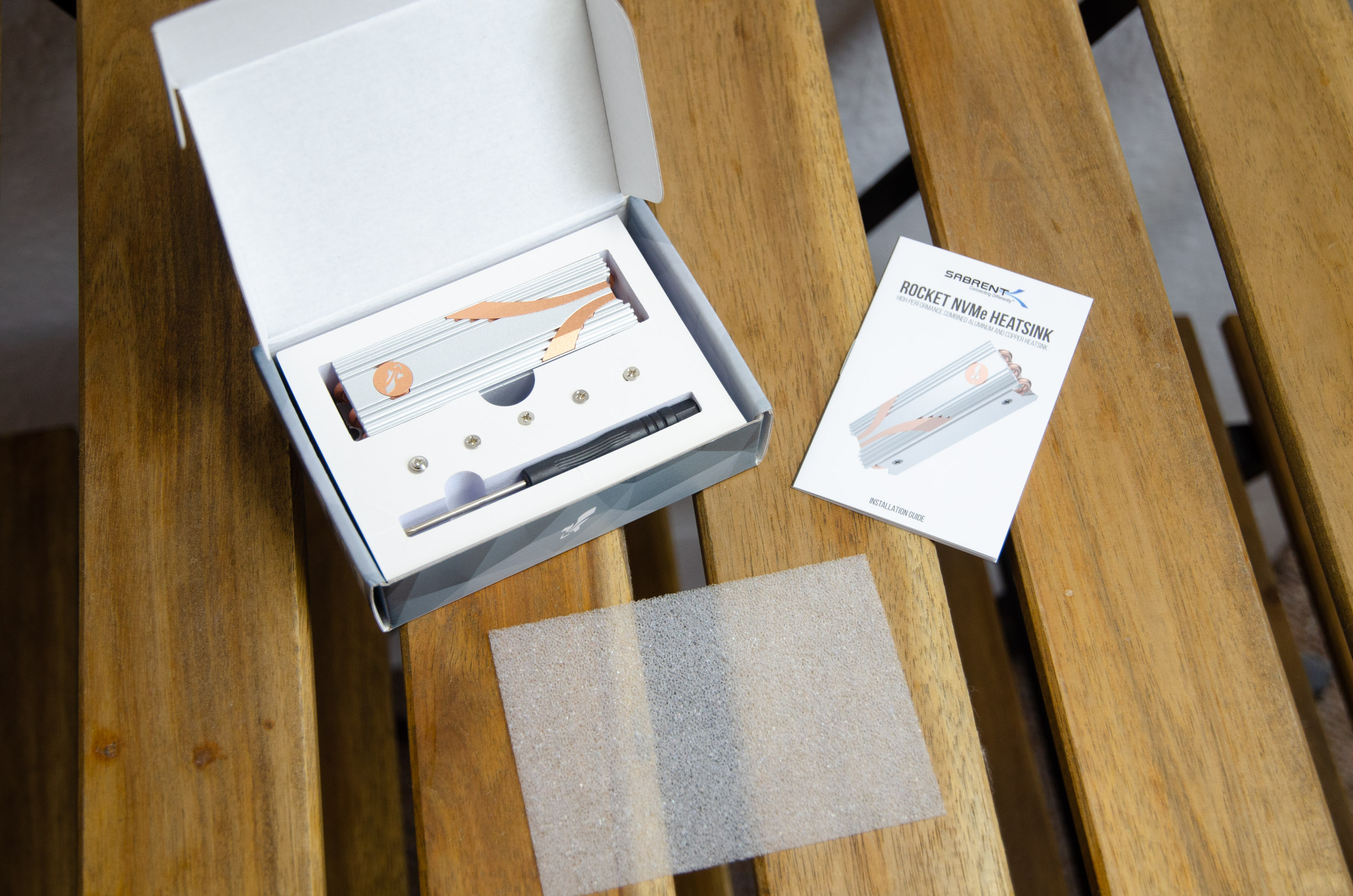 Also we have the ability to install a single or double sided M.2 and that’s why you get an extra thermal pad. 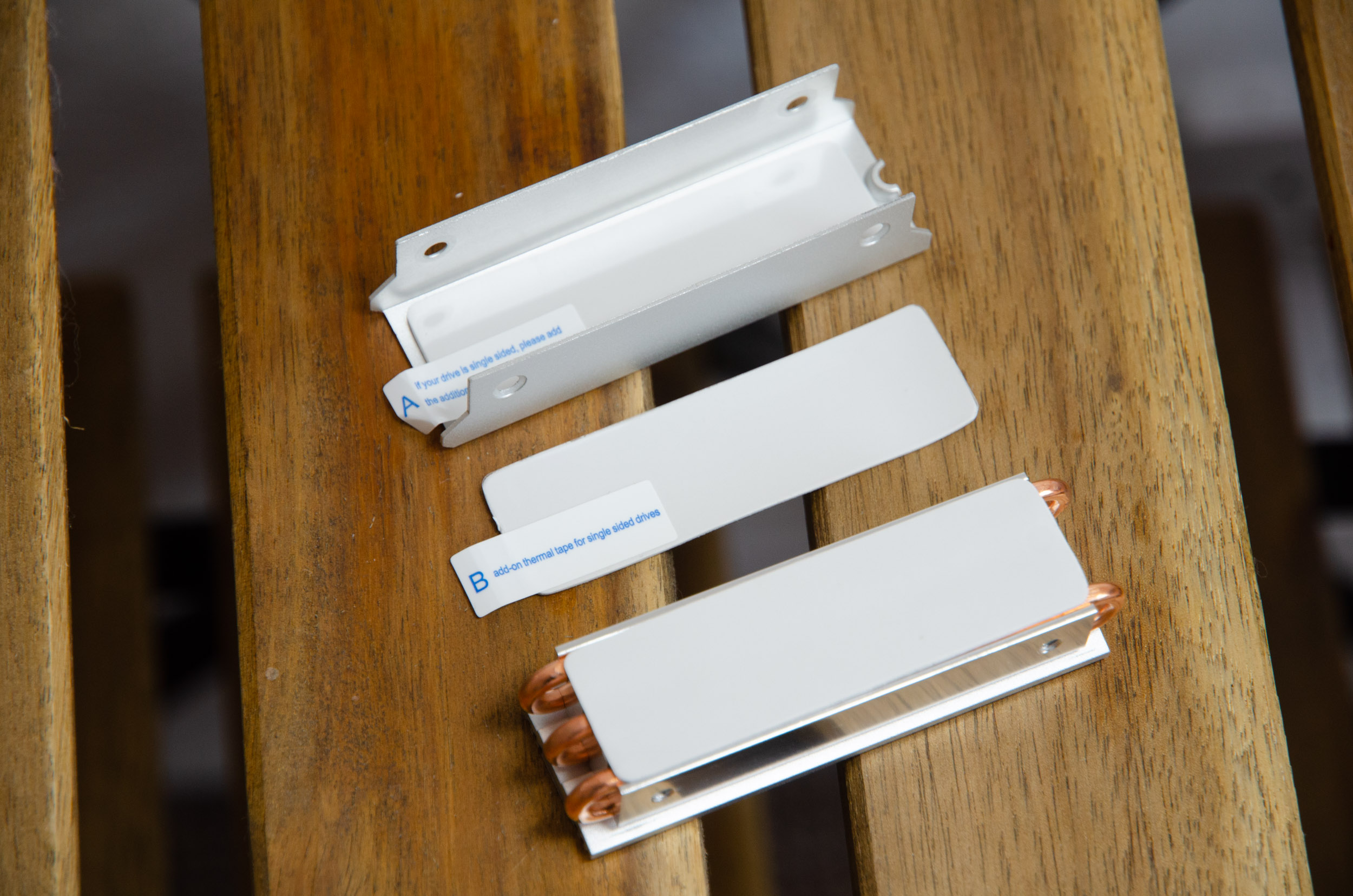 The whole assembly is layered from top to bottom as follows: 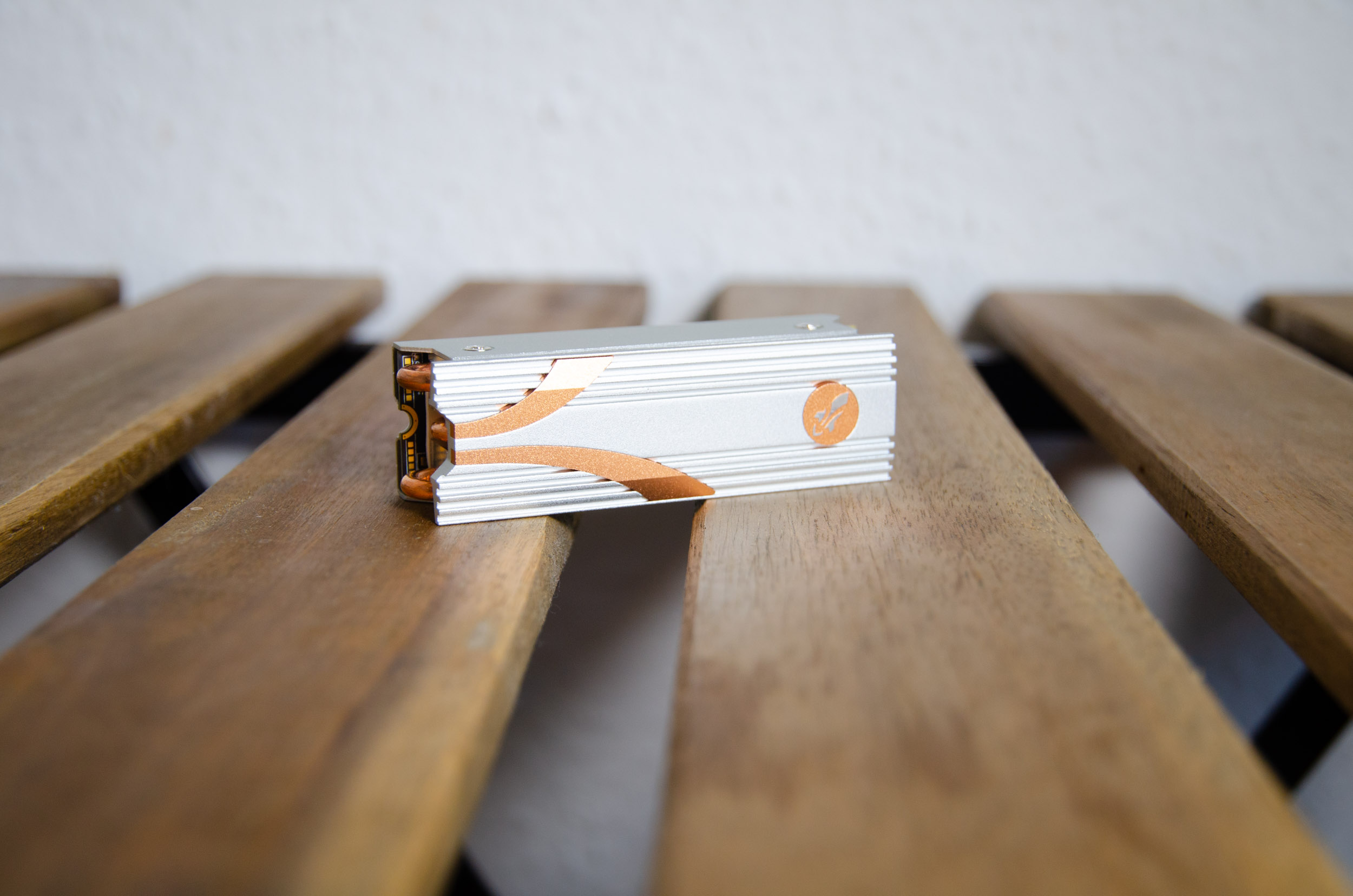 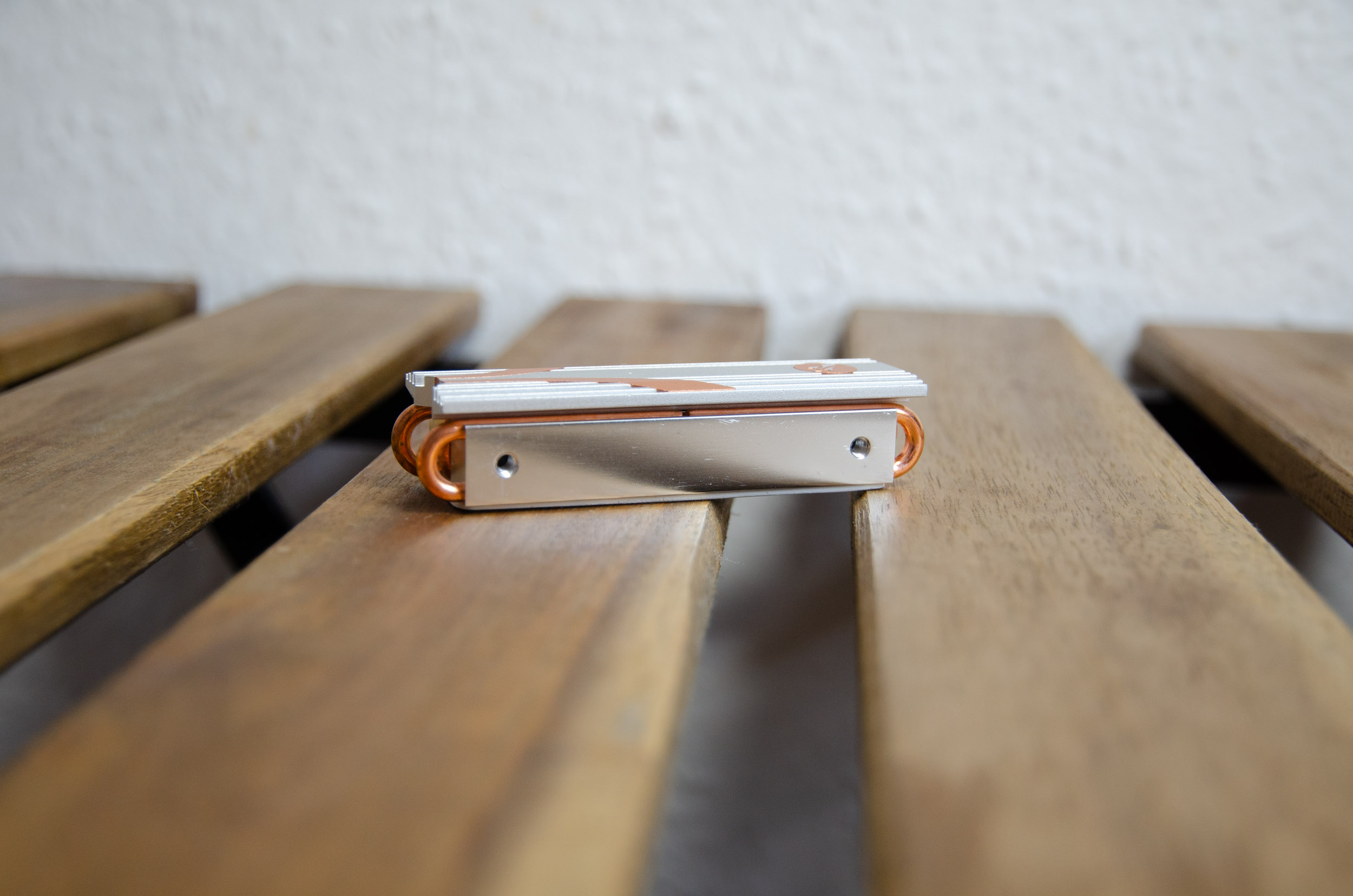 * A top heatspreader
* 3x copper heatpipes
* The main heatsink which is made from aluminium
* The top thermal pad which is already pre-applied
* (Insert your desired M.2 here)
* The last thermal pads depending on which M.2 you use, either a single or double sided variant
* The securing cage/tray that uses 4 screws to be secured into the main heatsink

Now let’s analyse the Q4 drive. This one is double sided and uses the Phison E16 controller which was the first one on the PCIe 4.0 x4 bandwidth to hit the market. The main side has a pre-applied copper heatspreader sticker which covers two of the NAND packages, the controller and one of the DRAM chips. 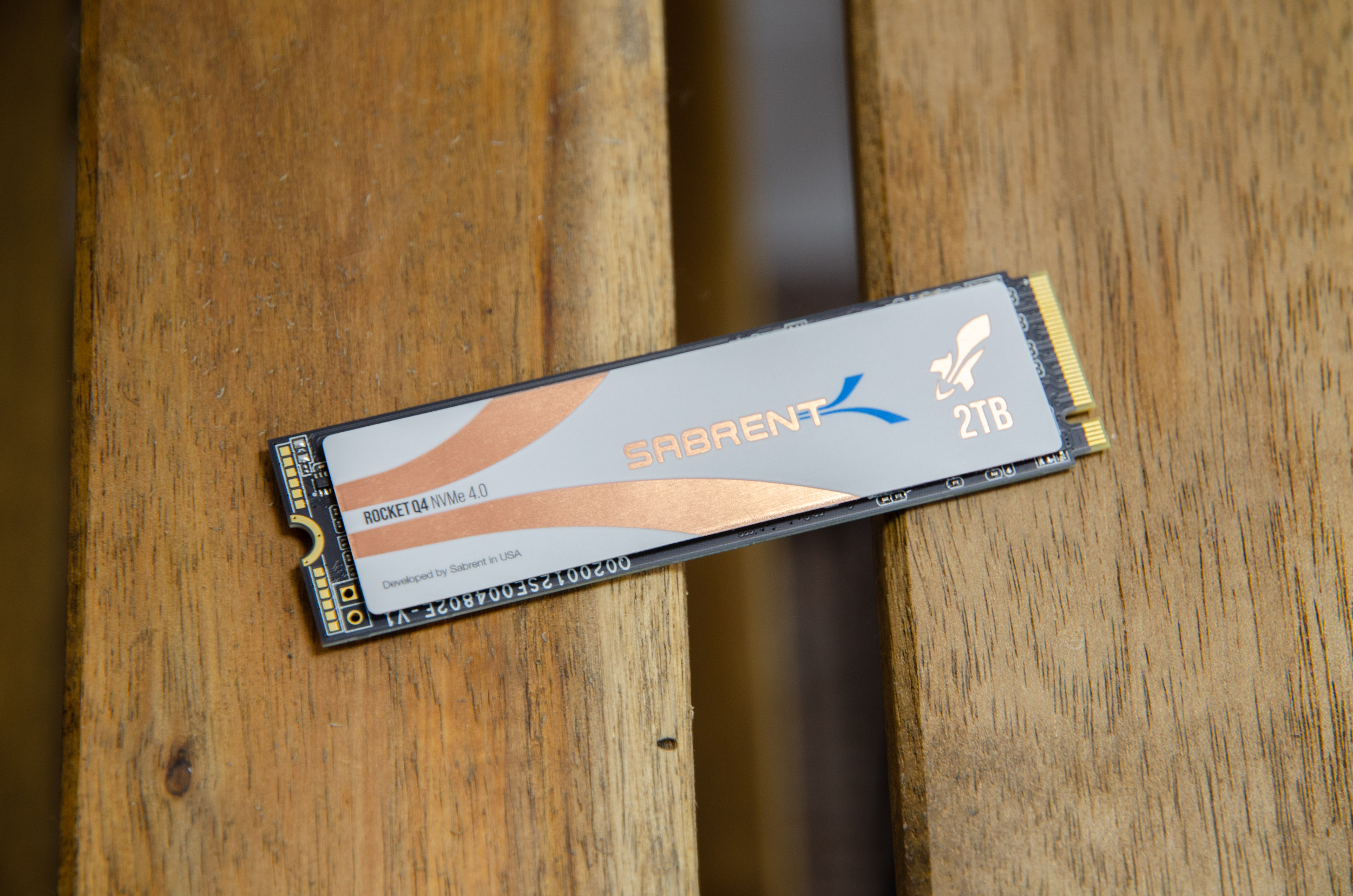 Then on the other side we have the remaining Micron N28 96-layer 3D QLC NAND cells and the other Hynix powered DDRAM chip. All of these will propel the Q4 2TB drive up to a rated speed of 4800 MB/s reads and 3600 MB/s writes. 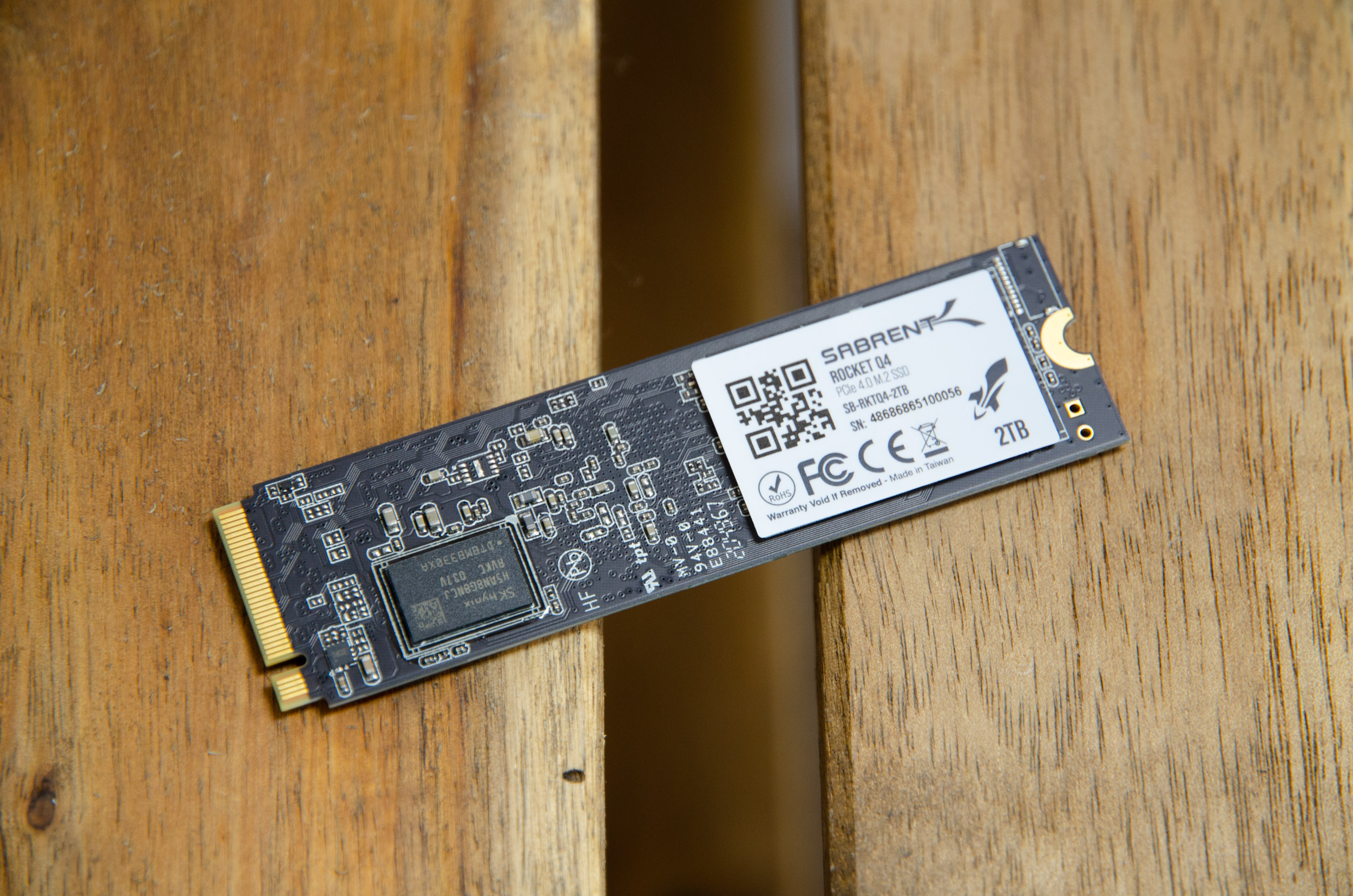 As we did in the previous Sabrent review, we will test the drive by itself with no airflow, followed by scenario with airflow and then finally with the bundled heatsink as well. 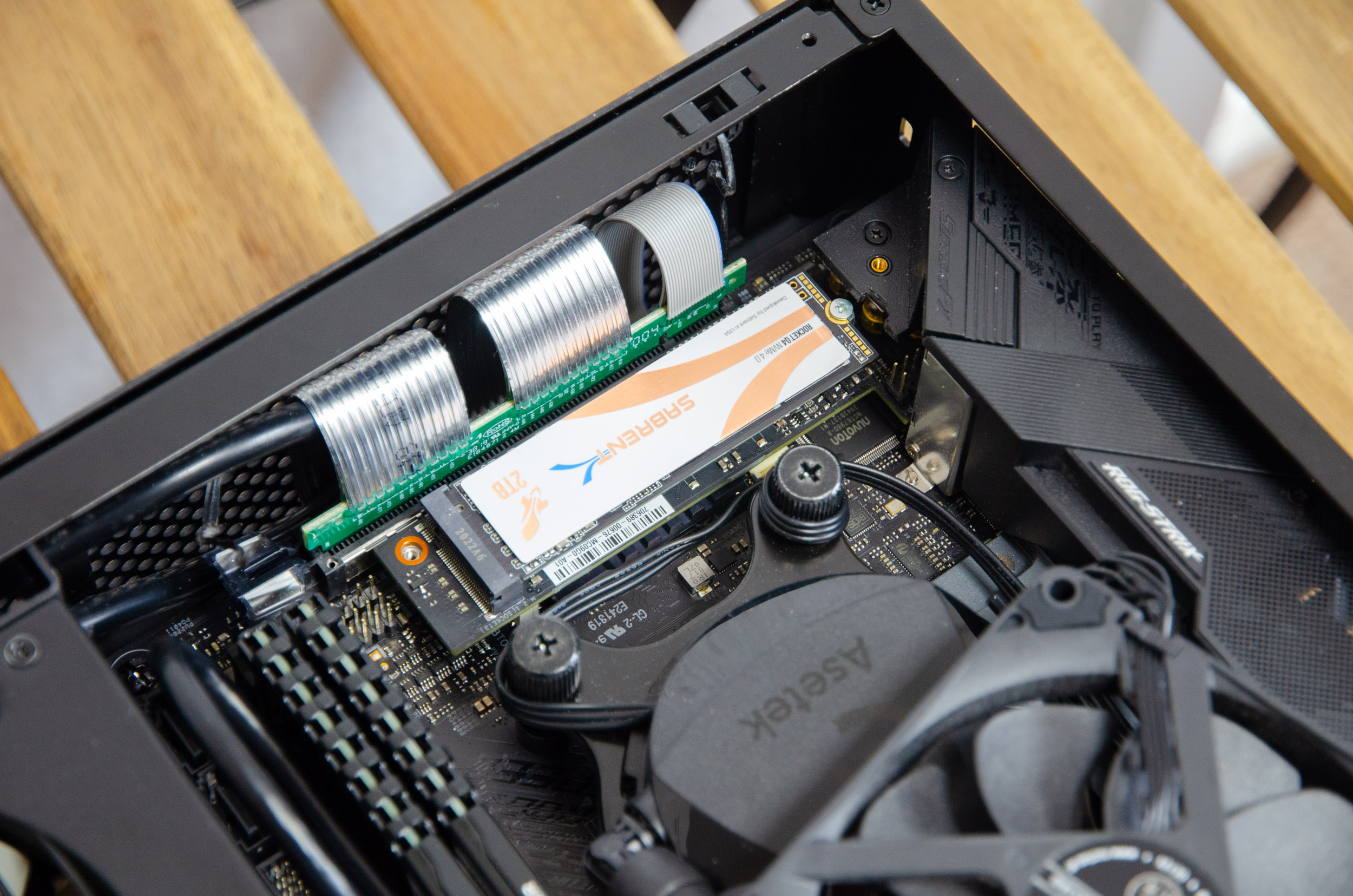 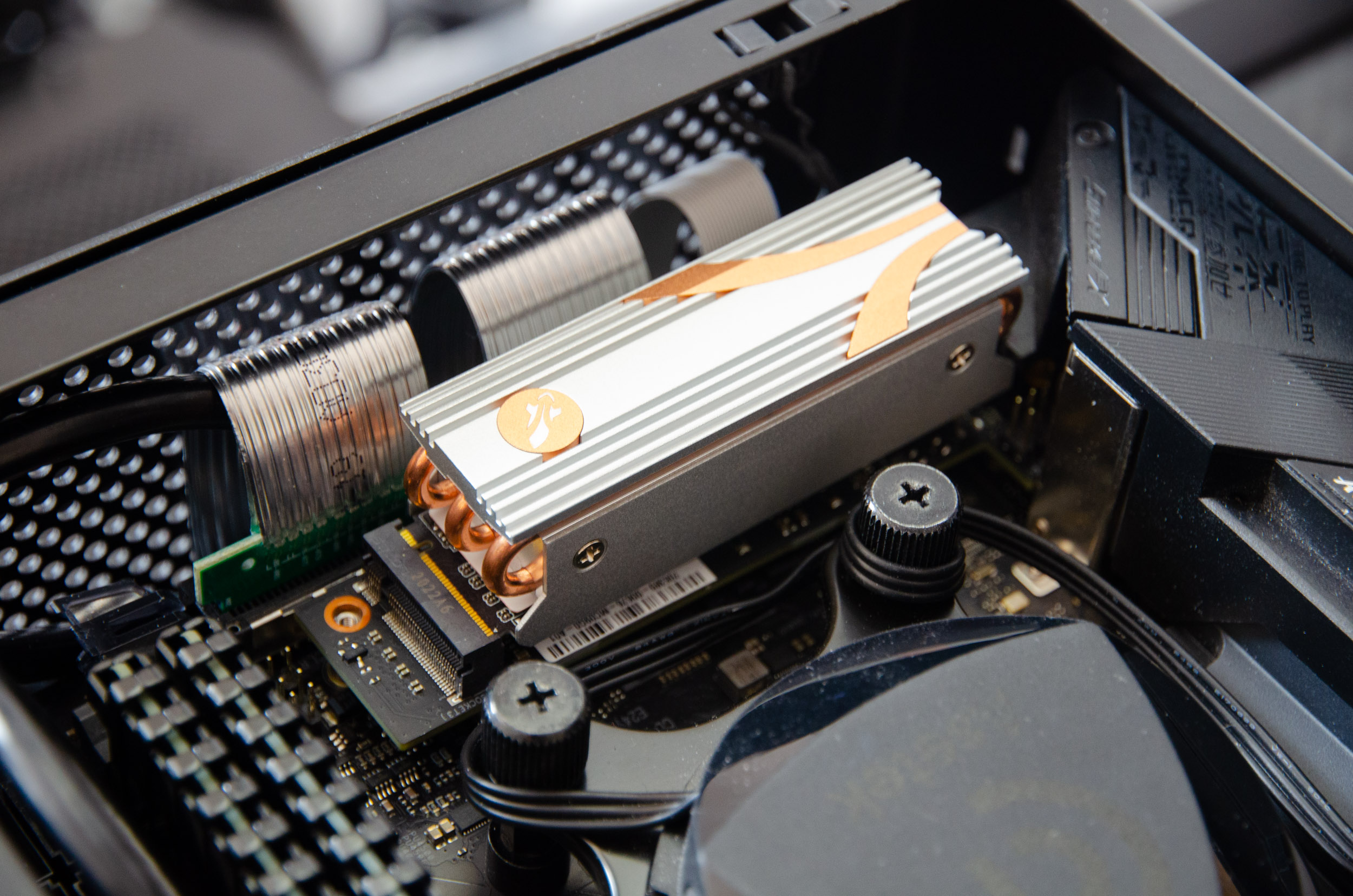 * Synthetic and real life big file transfer tests – a game folder of 76GB of mixed files and a single 13GB .mkv video file to test the burst speed and the SLC cache if present.
* All SSDs were secure-erased before our tests started
* Between tests, drives are left idle for 1 minute to allow them to flush and reorganise their internal data.
* Steps have been taken to ensure that the CPU’s power-saving features don’t interfere with any of our results. All of the CPU’s low-power states have been disabled.
* In order to minimise random variation, each of the real-life performance tests are run a few times with reboots in-between tests to reduce the impact of disk cache.
* (SATA SSDs only) Make sure you use a SATA 6Gbps capable motherboard and a matching cable to avoid bottle-necking. Then double check in the BIOS that you have the AHCI mode activated for another maximum performance tip.
* For the Gen4 x4 M.2s, you have to make sure you have a compatible motherboard that accepts and delivers the new bandwidth. Otherwise, it will work only in Gen3 x4 mode.
* All of the benchmarks were done with a 92mm side fan placed 2cm away and set at 60% RPM. Then the temperature scenarios and the heatsink were tested separately with an ambient temp of 22°C.
* For AMD users, make sure you update your motherboard chipset drivers from here. 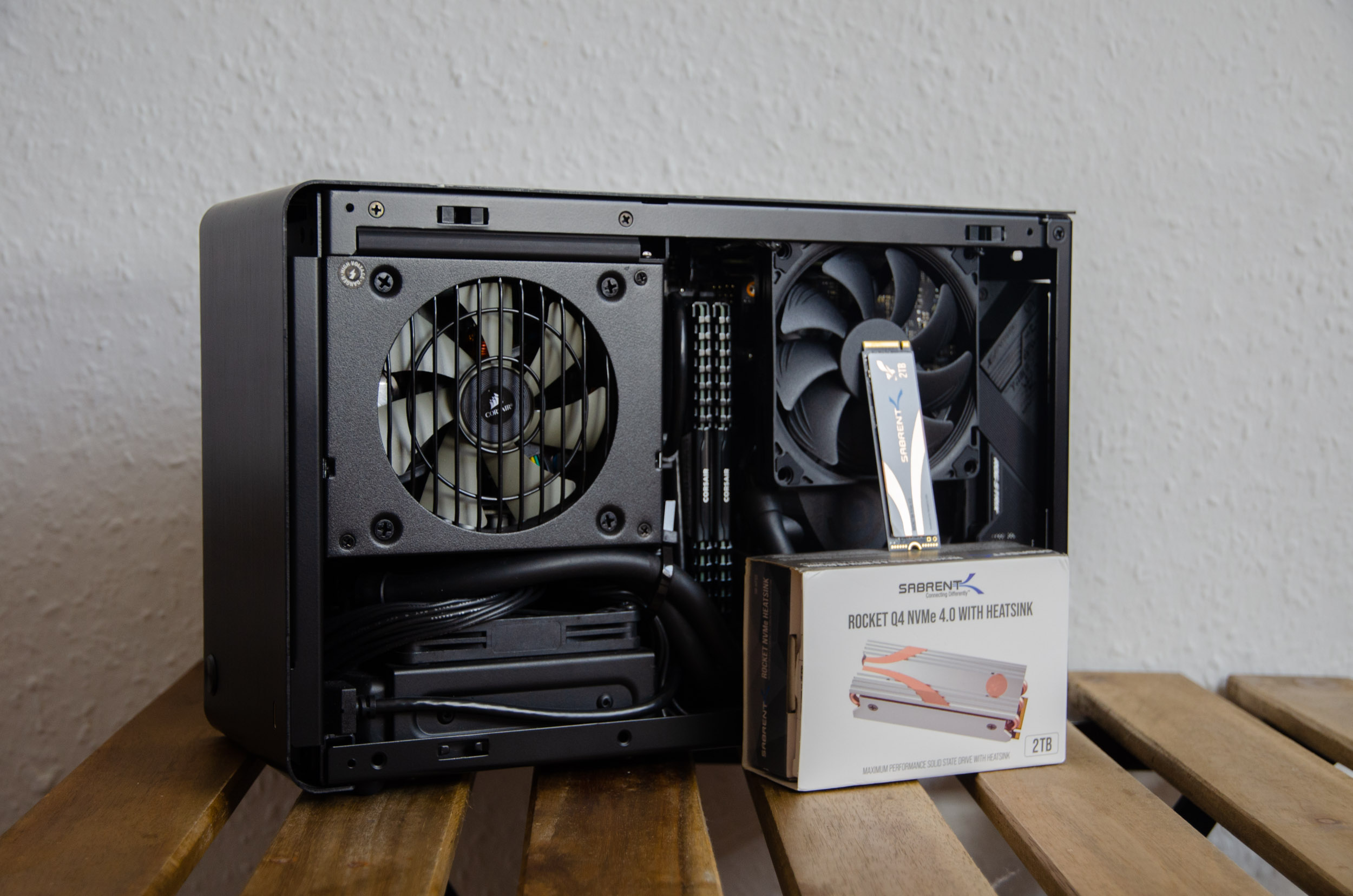 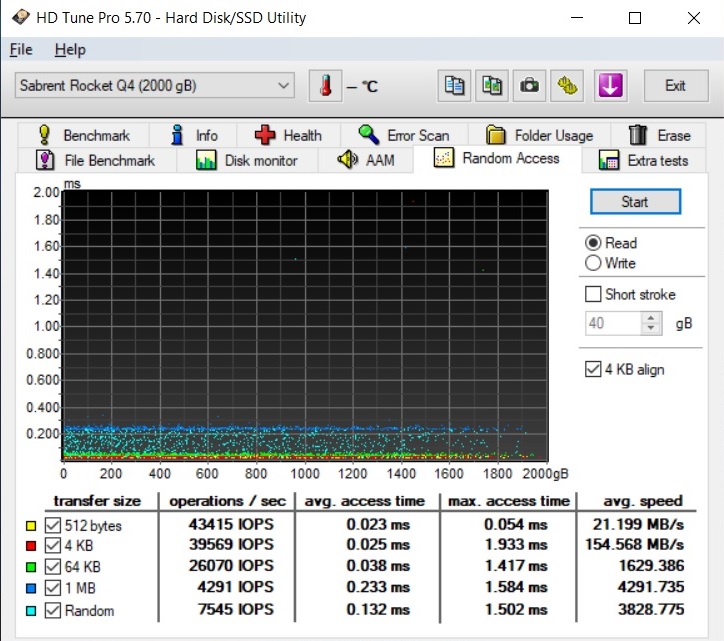 The 2TB Sabrent Q4 QLC drive takes second place in the charts managing to beat even the TLC based Silicon Power US70 drive. 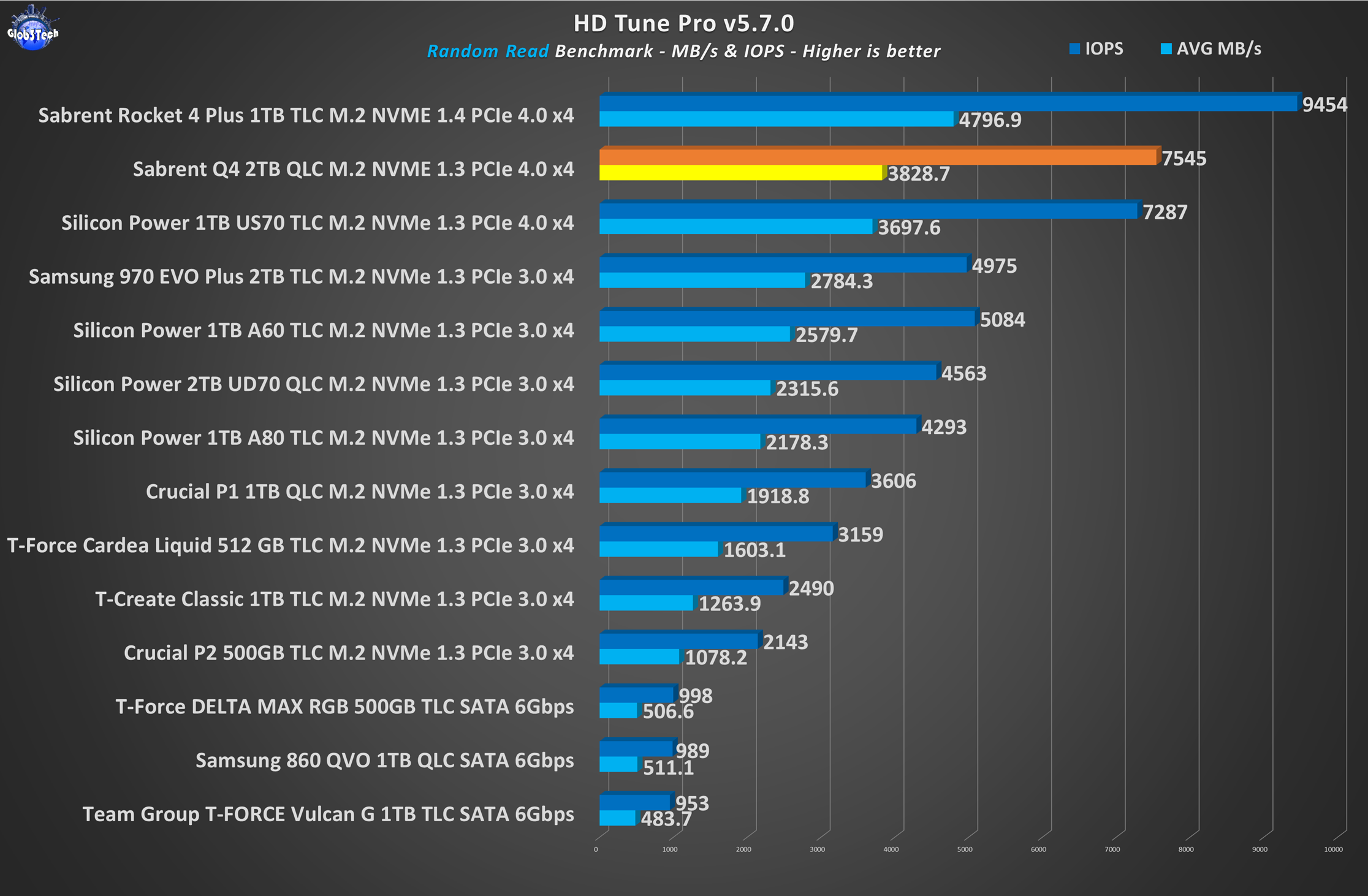 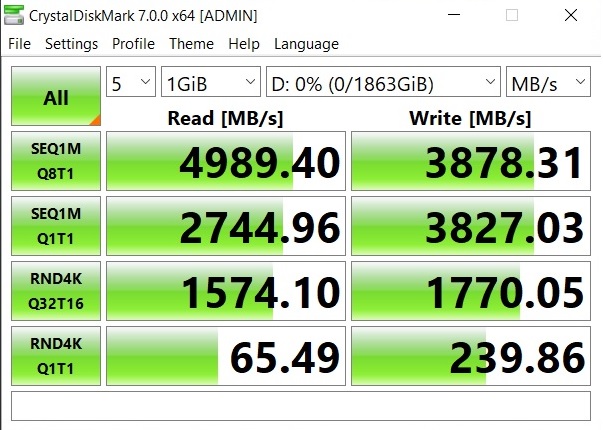 In the “read” benchmark the Q4 wins 2 out of the 4 tests when compared to the US70 drive. 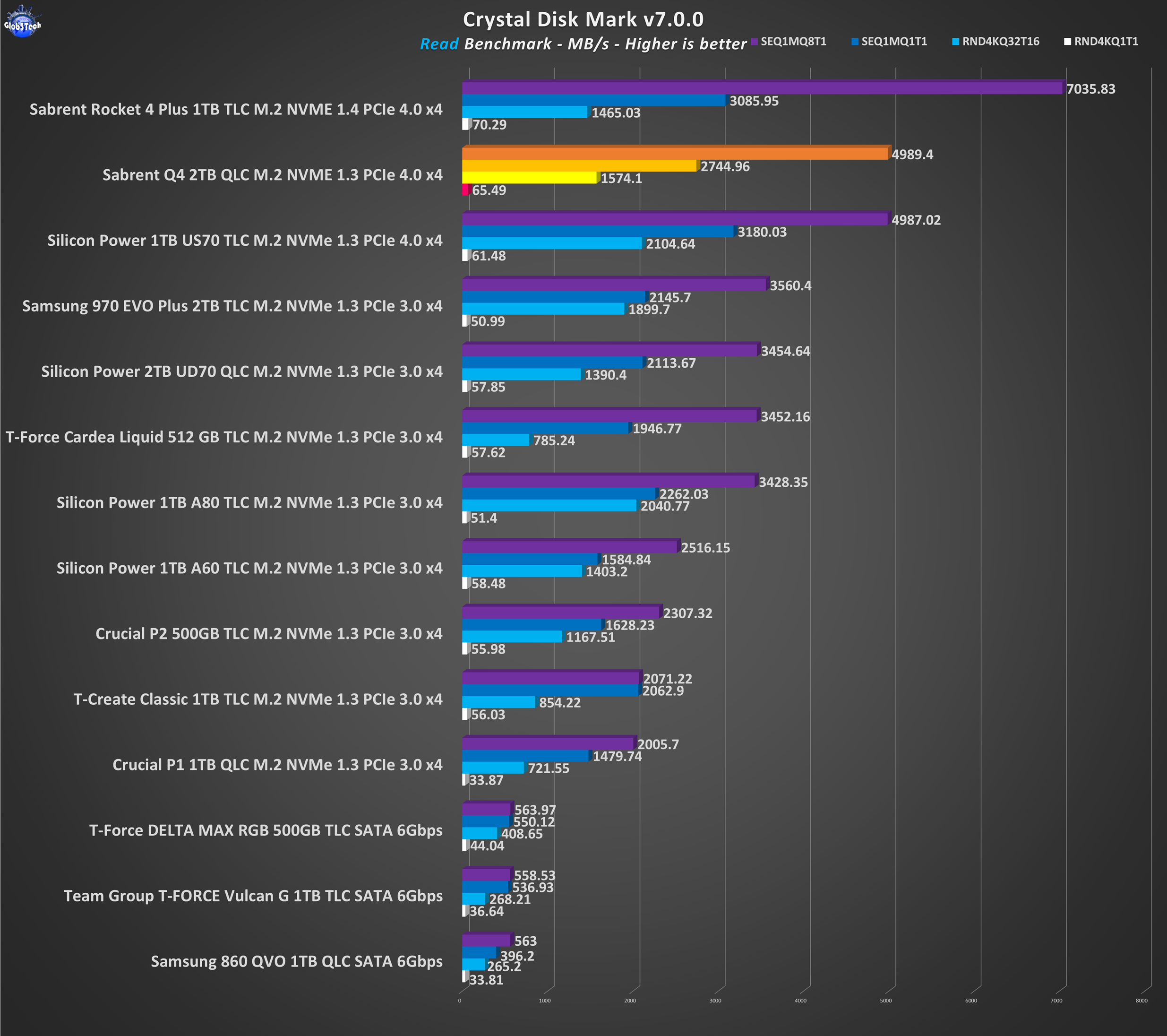 Moving to the “write” test, which is even more important in real life scenarios and here the TLC US70 takes the lead slightly over the Q4. 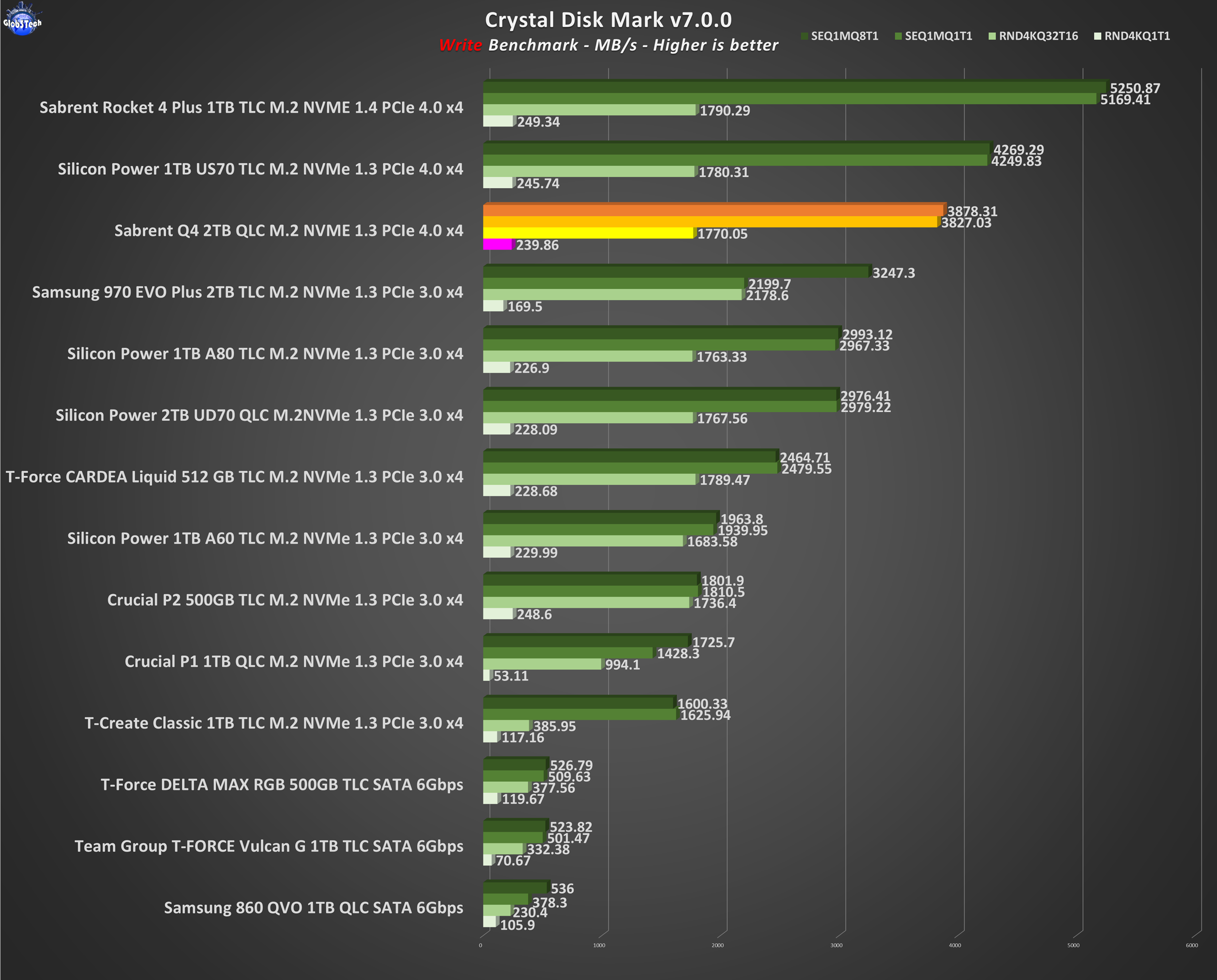 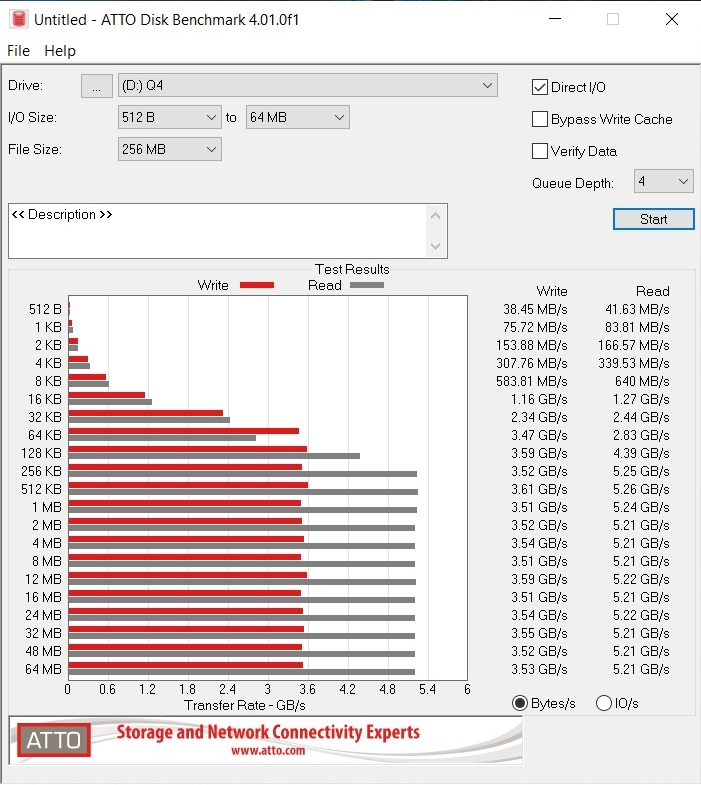 In this test the Q4 settles for an overall 3rd place. 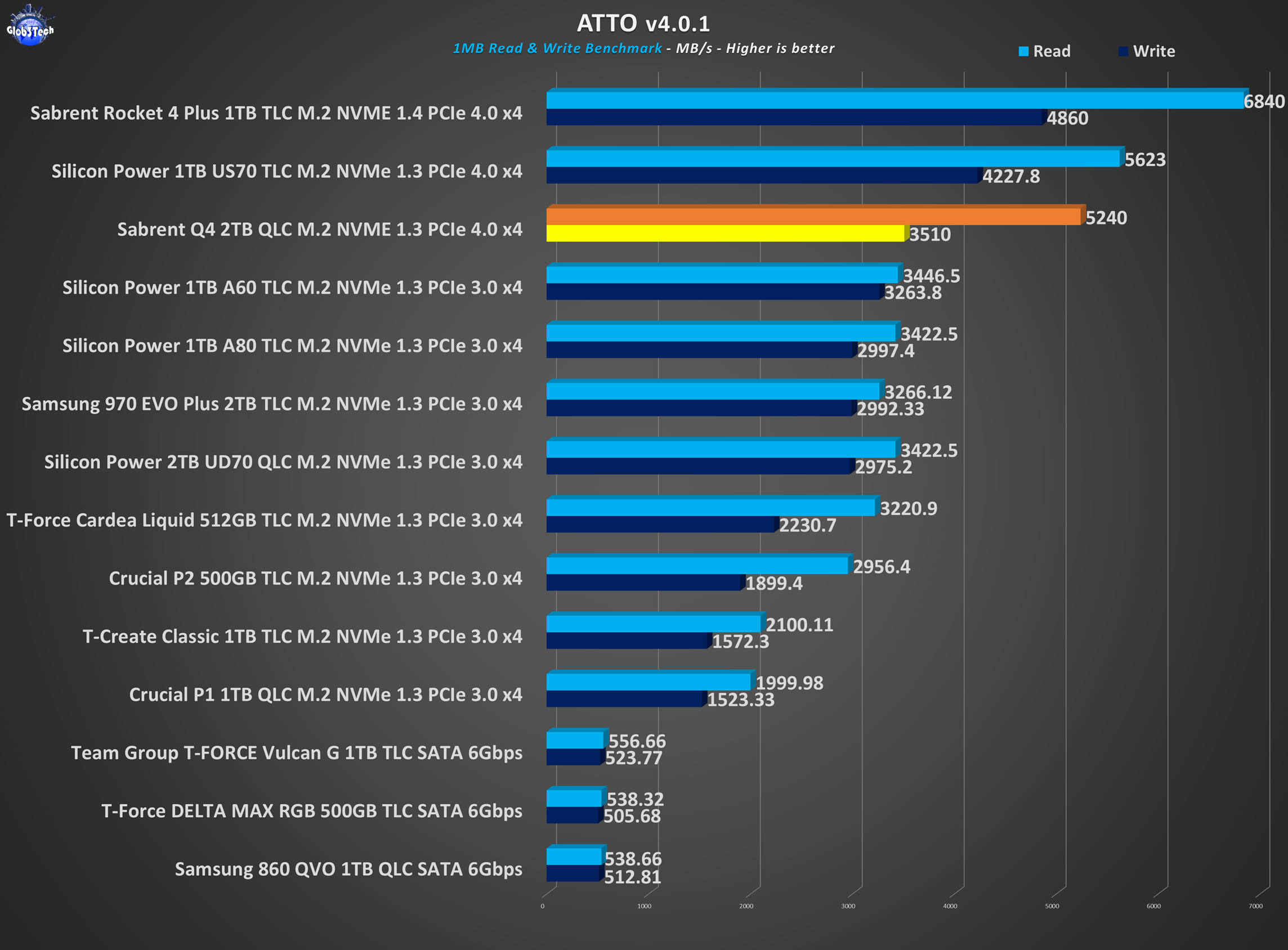 The final practical test revolves around some real life copy tests. Firstly, we will copy to the SSD a single 13GB .mkv video file to test the burst speed followed by a copy of the same file, from the SSD onto itself. Then the same process is repeated but with a big 76GB installation folder from the Assassin’s Creed Valhalla game. Overall for both scenarios, this is what we like to see, consistency all the way through.

Now let’s inspect the operating temps especially in a small form factor build like the DAN A4-SFX enclosure. Thus below we have a benchmark run in Crystal Disk Mark for 3 different scenarios in the following order:

1) No side fan/airflow/extra heatsink – It’s obvious that at this temperature the Q4 is thermal throttling like mad and thus it basically provides only 30% of its true write potential. The max temperature was 74°C.

2) Side fan @ 60% RPM – The extra airflow makes a huge impact and we shave off exactly 20°C of the peak recorded temperature.

3) With the Sabrent heatsink – With just the heatsink and no additional airflow, this combo proves to be the best option and it’s 10°C cooler than the side fan scenario.

The PCIe 4.0 adoption is gaining traction and the Sabrent Q4 2TB proves to be the best QLC drive that we have ever tested so far. Value wise, it slots perfectly between the fully fledged TLC Gen4x4 drives and the Gen3x4 ones, offering a great combo of overall performance and capacity. The only drawback comes in the form of low official endurance numbers when compared to even some of the QLC based Gen3x4 drives. Also make sure you give it proper cooling but that’s why they sell the heatsink combos anyway. For now, this Sabrent Q4 at 2TB capacity, strikes the nail on the value proposition dogma.

Glob3trotters “Highly Recommend” Award 4.5 out of 5

A lot of thanks to Sabrent for supplying us with this combo!